The title for this week’s post is a bit deceiving. The Thames dolphin in question is not one of the marine mammals, rather it is a structure in the river which is also called a dolphin.

The definitions for this type of dolphin include a pile, or a collection of piles in the river to which a boat can be moored, or a cluster of piles at the entrance to a dock, and it is this later definition which I suspect applies to the dolphin in my father’s photo at the entrance to the Surrey Lock and Basin in Rotherhithe – photographed in 1947: 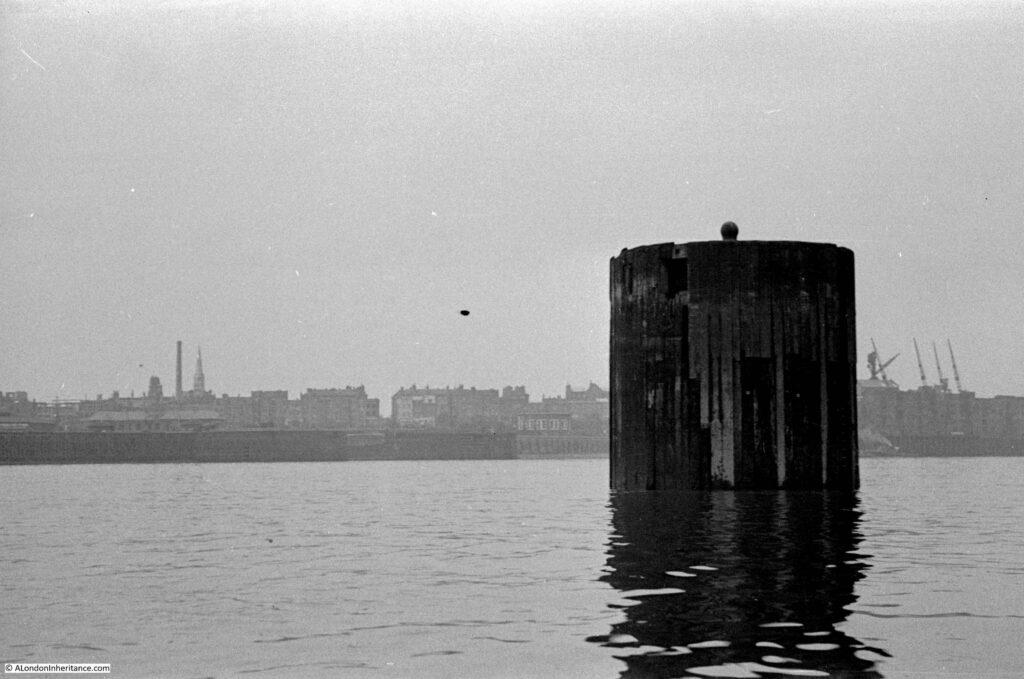 The photo was taken from the Thames foreshore, adjacent to the air shaft of the Rotherhithe tunnel, looking across to the Shadwell / Wapping side of the river.

The negative with the photo was in poor condition and took some processing to get to the copy you see above, which unfortunately still has the opposite bank of the river with a rather poor contrast and lack of detail to the buildings.

I could not get down to the foreshore to take a similar photo as the tide was not sufficiently out, so the angle of the 2020 photo is slightly different. The following photo shows that the dolphin can still be seen today, along with some landmarks visible in 1947 on the opposite side of the river. 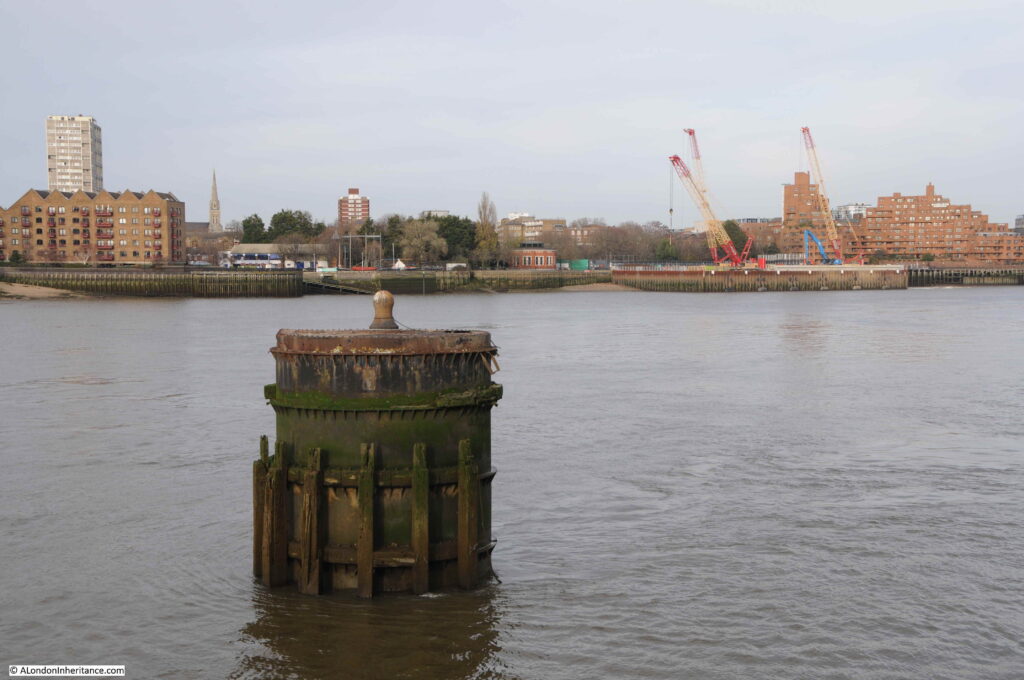 The following extract is from the 1948 revision of the Ordinance Survey map. The lines converge on the approximate point where my father was standing to take the photo. A blue circle marks the location of the dolphin (‘Reproduced with the permission of the National Library of Scotland’). 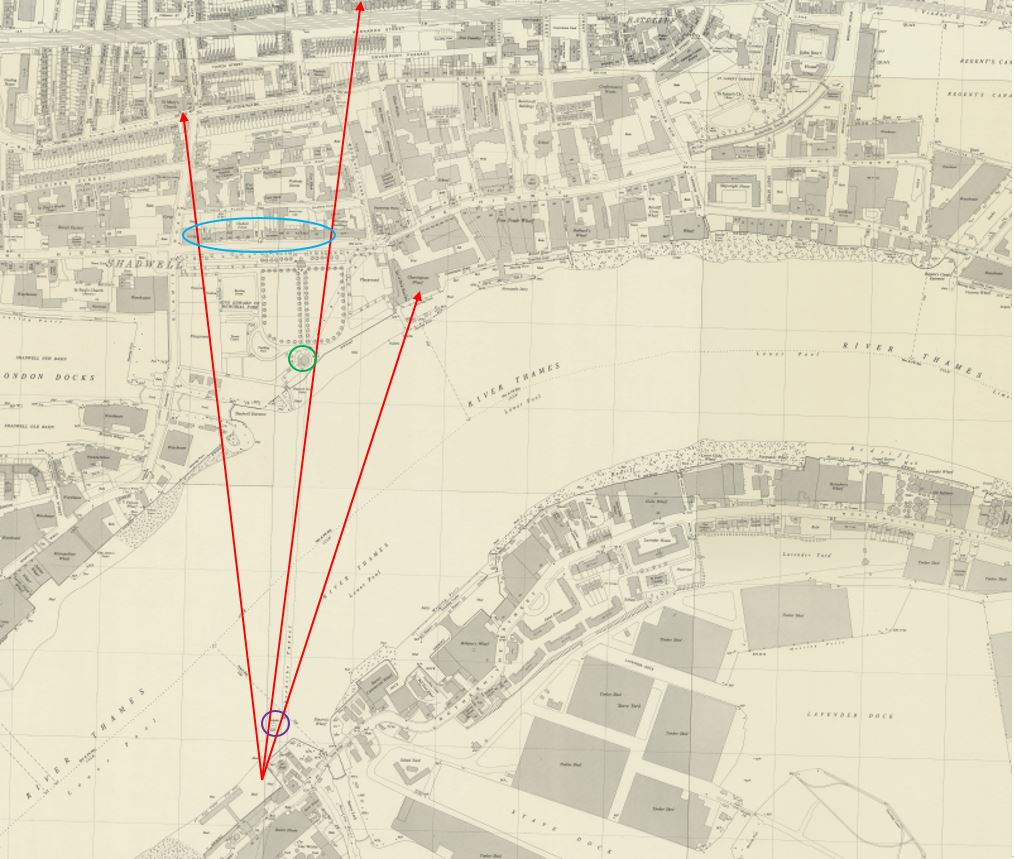 The green circle on the opposite side of the river is the position of the air shaft of the Rotherhithe tunnel which can be seen in the 1947 photo. The centre red arrow shows the alignment of the airshaft in relation to the dolphin.

The arrow on the left points to the church spire that be seen in the 1947 photo. This is the spire of St Mary’s in Cable Street. The spire can also be seen in the 2020 photo, and I photographed the church when I was walking the area a few years ago. 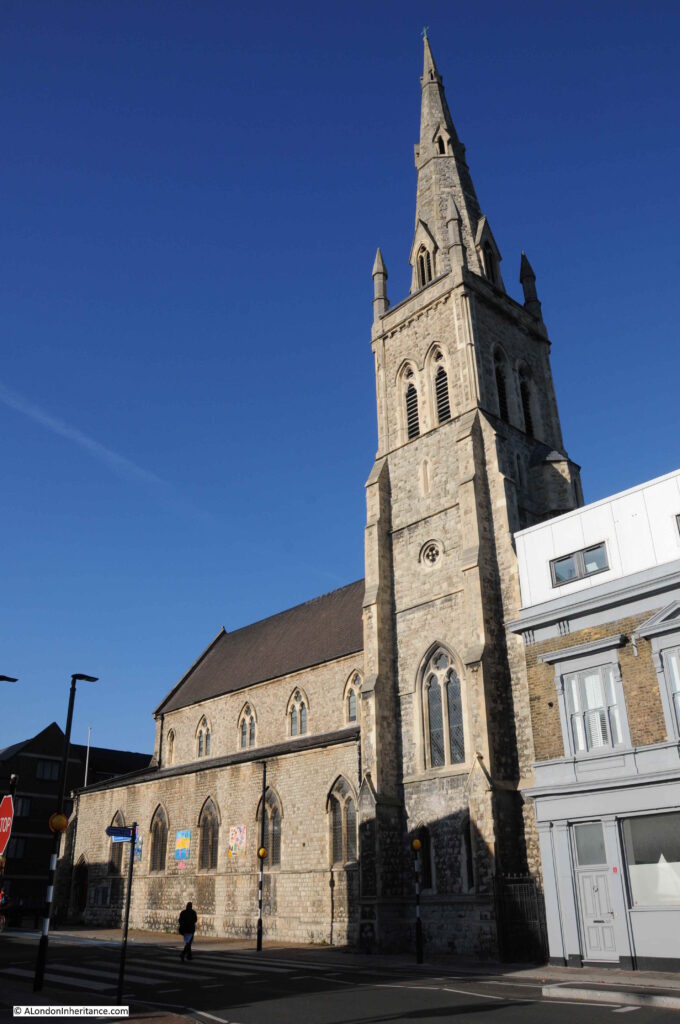 The arrow on the right points to the buildings which can be seen to the right of the dolphin. These are the buildings and cranes of Charringtons Wharf, which were demolished some years ago to be replaced by the large block of flats on the site today. The cranes to the right of the tunnel air shaft in the 2020 photo mark one of the construction sites for the Thames Tideway Tunnel, or Super Sewer.

There is a prominent line of buildings running between the dolphin and the spire of the church. These were buildings along the northern edge of The Highway – buildings that have now been demolished.

The gap in the centre of the line of buildings is open space between The Highway and Glamis Place, with the ruins of a pub to the left.

The entrance to Shadwell Basin is also in the photo, but is hard to see due to the lack of contrast, and the lighting of the scene across the river. The entrance is also at an angle to the river so the northern side of the entrance looks like a continuation of the river wall.

I have marked these features on the original 1947 photo as shown below: 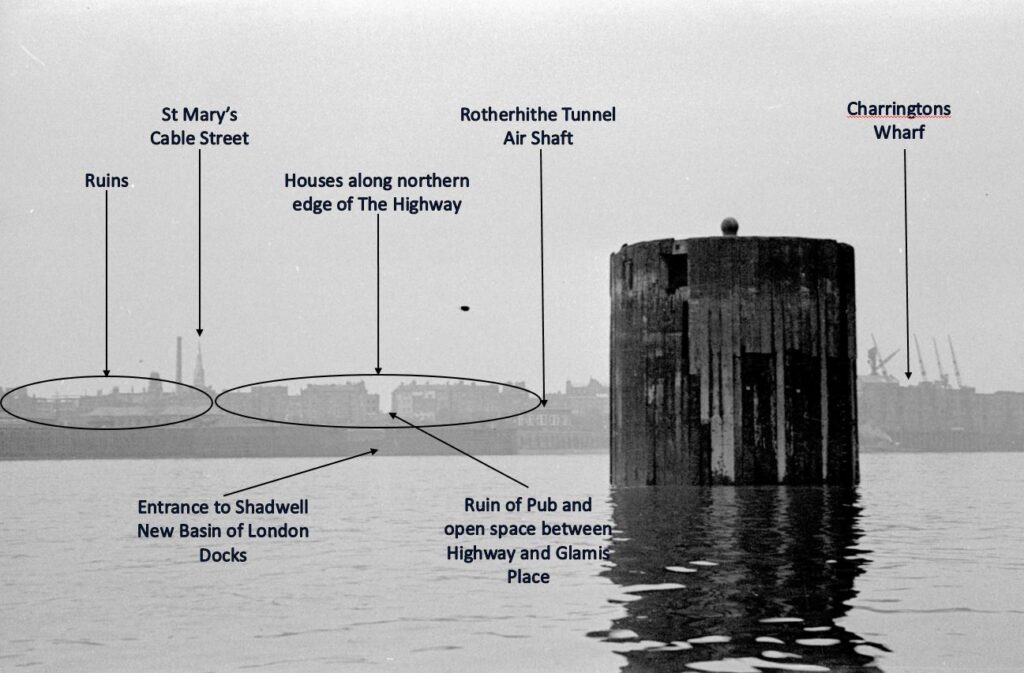 There is one feature in the 1947 photo that I could not locate, however the Britain from Above archive came to the rescue.

The following photo from 1946 shows the Wapping / Shadwell area. The tunnel air shaft is lower left and I have ringed the church. I have written the name of The Highway along the street and the row of buildings along the north side of the street can be seen. 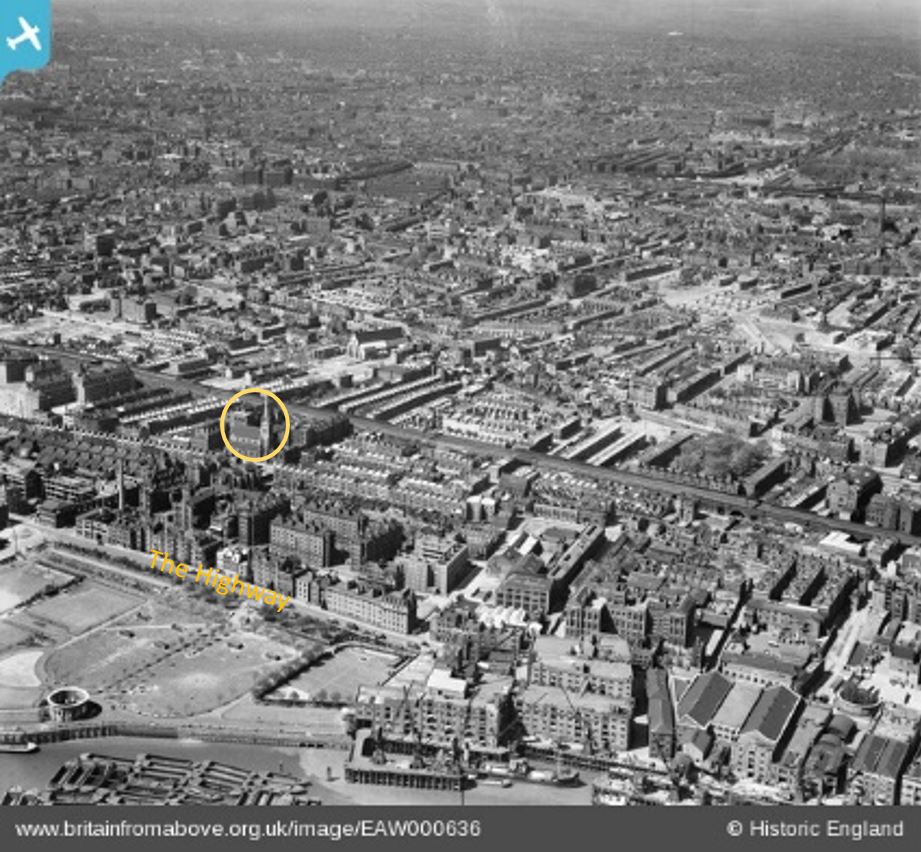 From the church spire, look diagonally to the lower left and you will see a chimney. This is the chimney seen in the 1947 photo and is the feature I could not locate.

Comparing the photo and the OS maps, the chimney looks as if it may have been part of the Queen Elizabeth Hospital for Children.

The following map shows the area today. The lower solid red circle is the point from where the photo was taken, and for reference, the upper red ring is the location of the church (Map © OpenStreetMap contributors). 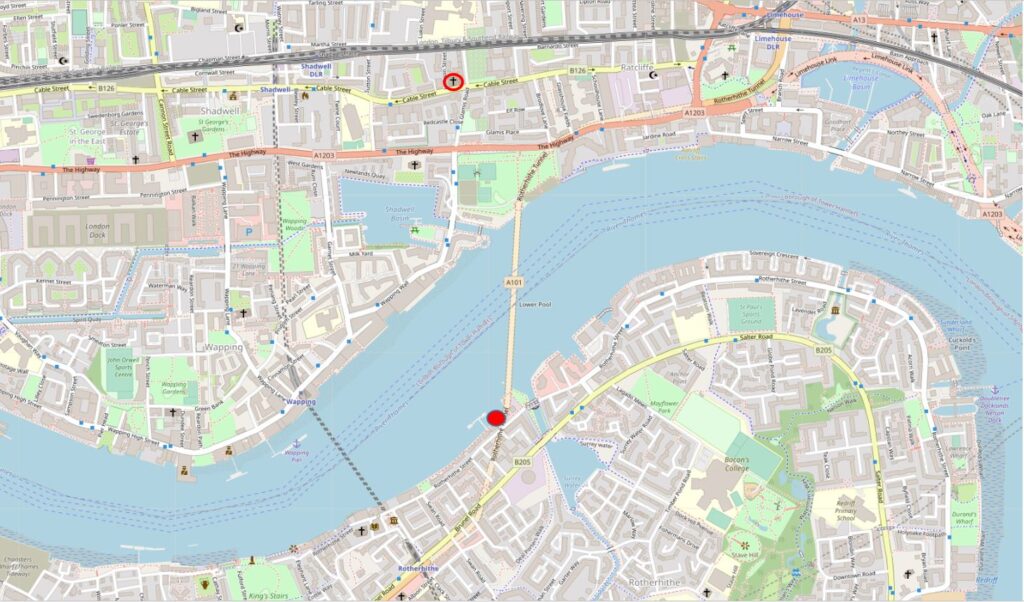 The entrance to the Surrey Basin can be seen to the right of the lower red circle and the entrance to Shadwell New Basin is on the opposite bank.

The following photo is looking slightly to the west. The air shaft of the tunnel is opposite, and it is strange to imagine the thousands of cars and lorries that are running daily, under the river between where I am standing and the air shaft opposite. 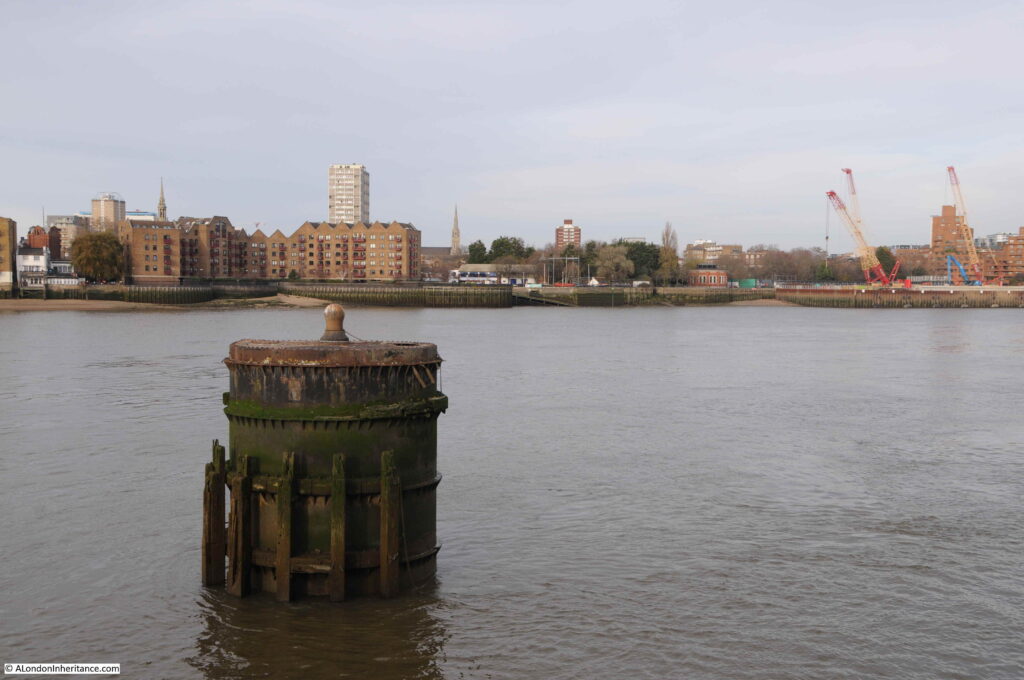 The dolphin has been repaired since the 1947 photo, but still retains the mooring bollard on top.

Across the river, there is a second church spire to the left, this is St Paul’s Shadwell. The white building on the extreme left is the Prospect of Whitby pub. 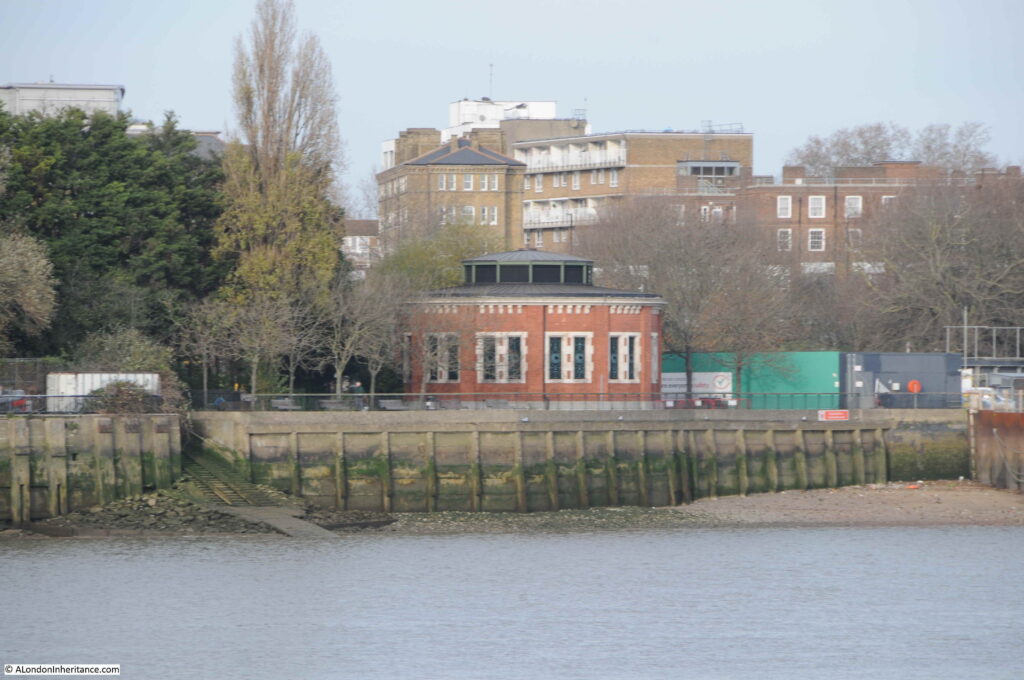 The area behind the northern airshaft is the King Edward VII Memorial Park – a fascinating area which I wrote about here.

The following photo shows the Rotherhithe tunnel air shaft on the south bank of the river, mirroring the design of the structure on the opposite bank. 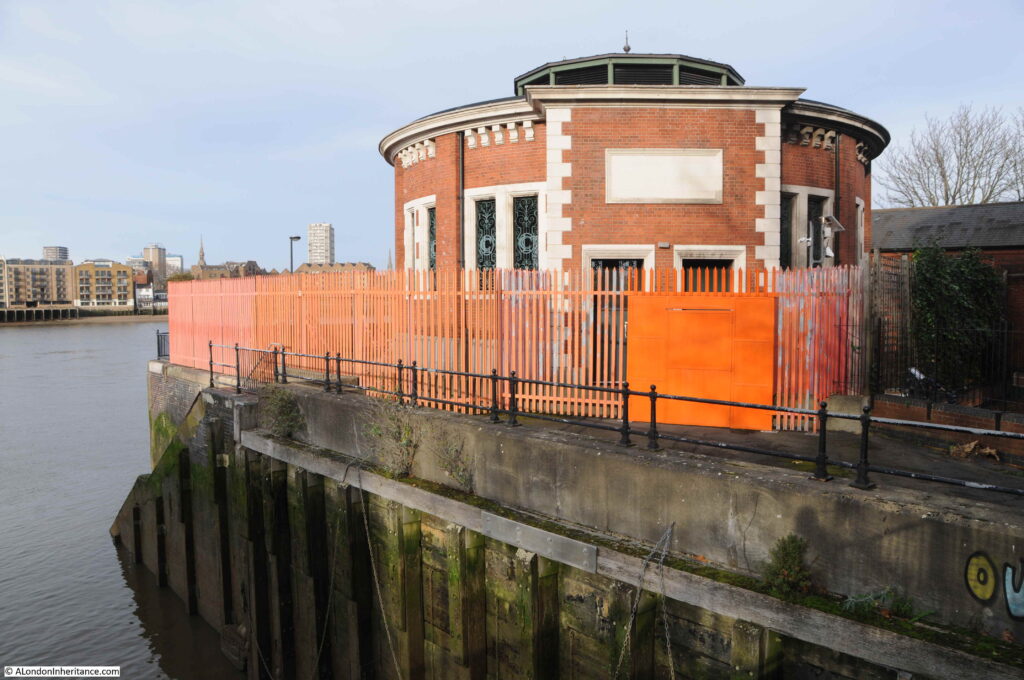 The location of these airshafts can be seen when travelling through the Rotherhithe tunnel. They are each located where the tunnel bends, and with the walls of the tunnel set back for the infrastructure leading up through the air shaft.

If you look along the river wall in the above photo, you will see steps descending down to the foreshore, which at the time I was there were still partly underwater.

I suspect this was the method my father used to get down to the foreshore to take the 1947 photo, as the steps are also shown on the 1948 Ordnance Survey map. 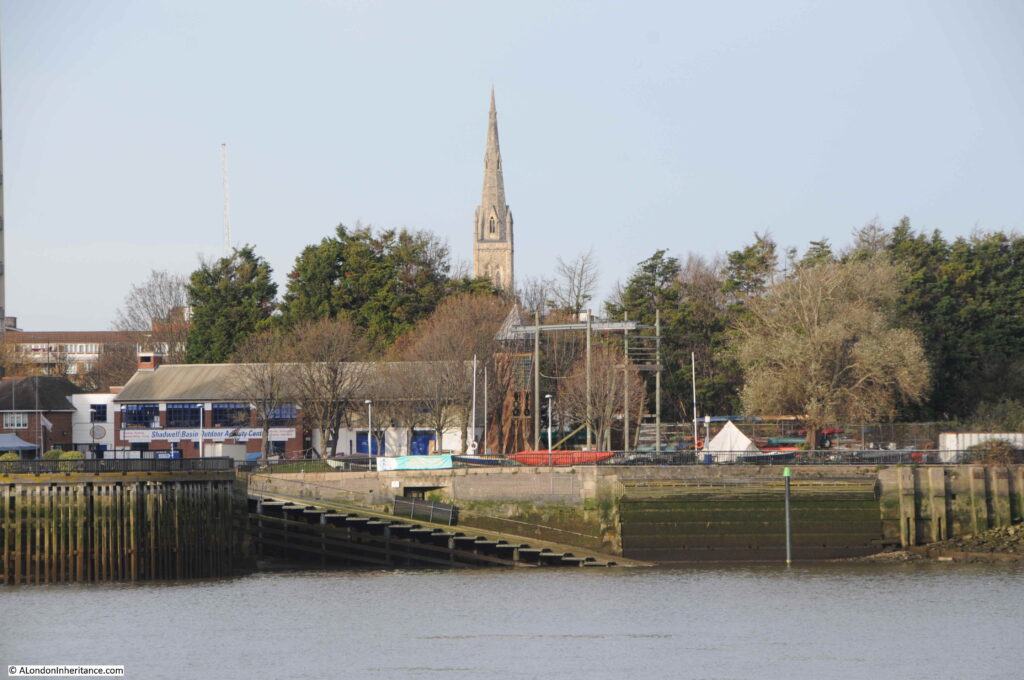 The Prospect of Whitby on the northern bank of the river (I can only dream of having a beer there at the moment): 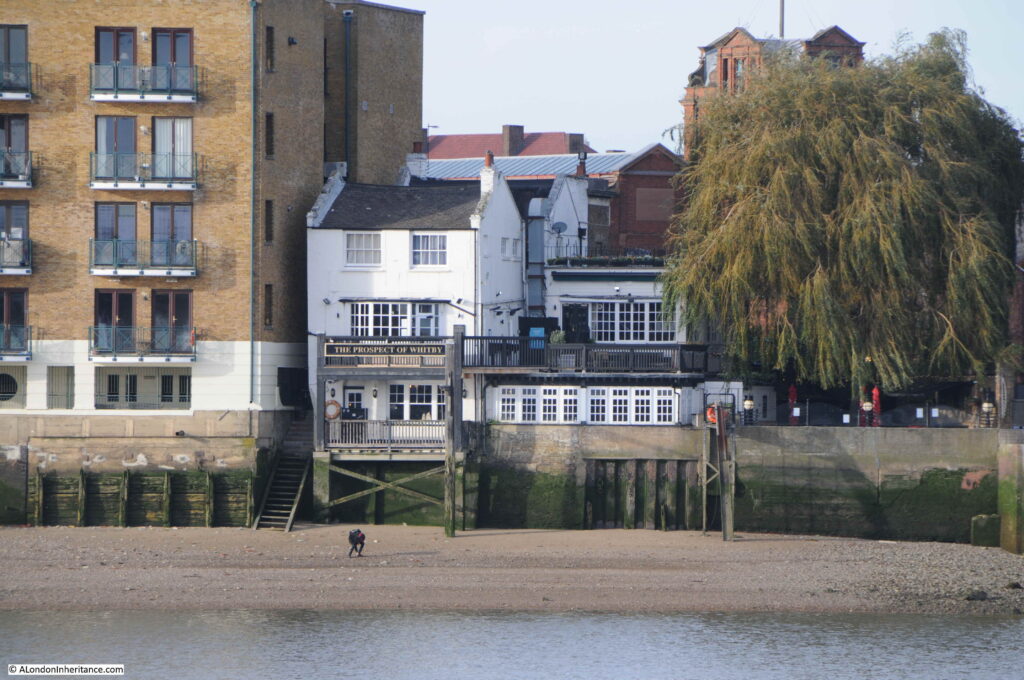 View looking west along the river with the dolphin: 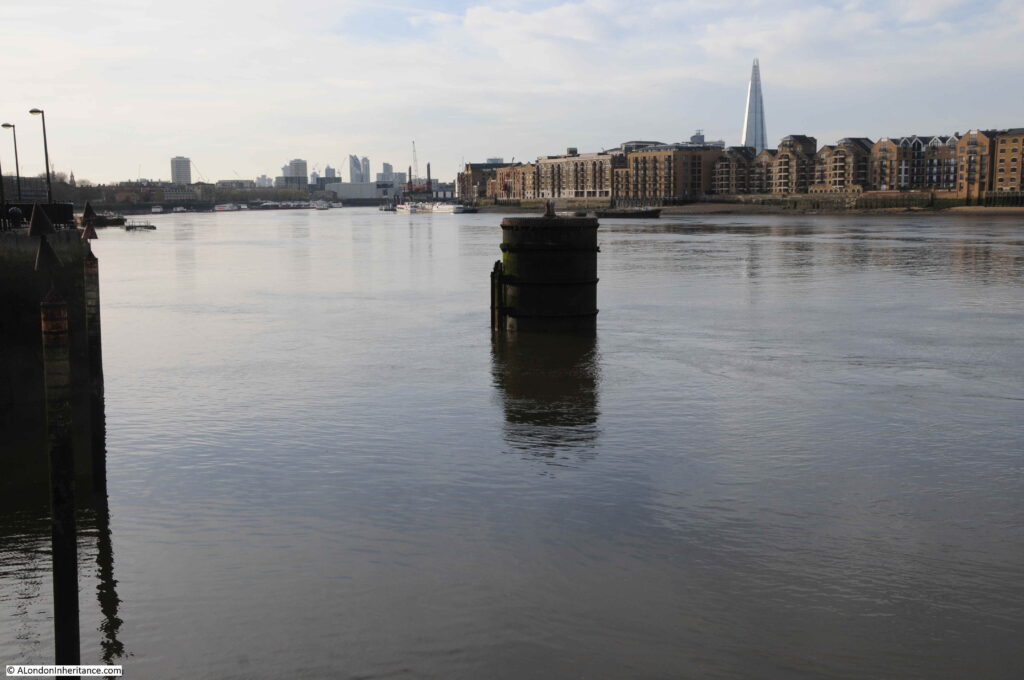 The dolphin is just outside the entrance to the Surrey Lock, which was the western entrance to the Surrey Basin, and the large complex of docks that once occupied the peninsula. The following extract from the 1940 edition of Bartholomew’s Reference Atlas of Greater London shows the considerable size of the docks. The entrance by the dolphin is on the left and labelled Surrey Docks. 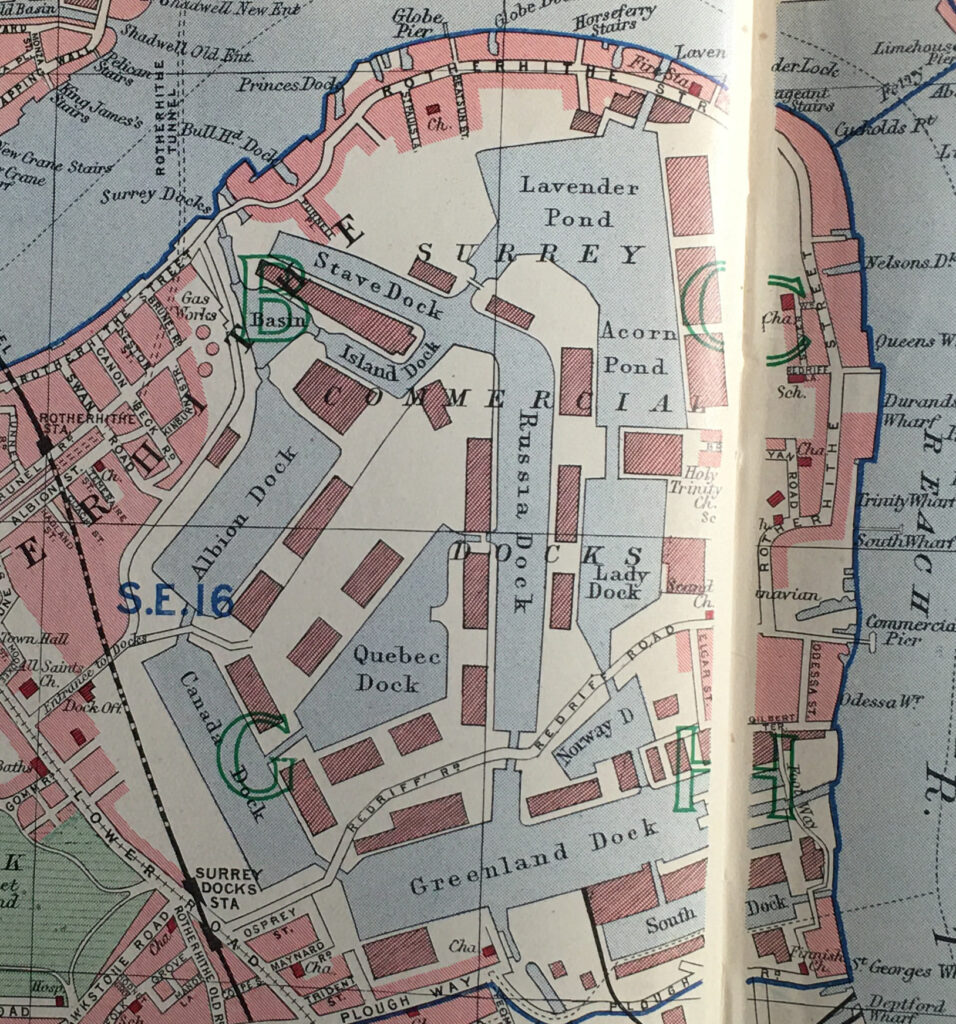 The following photo shows more clearly the position of the dolphin and the entrance to the docks, which today have two posts marking the entrance. 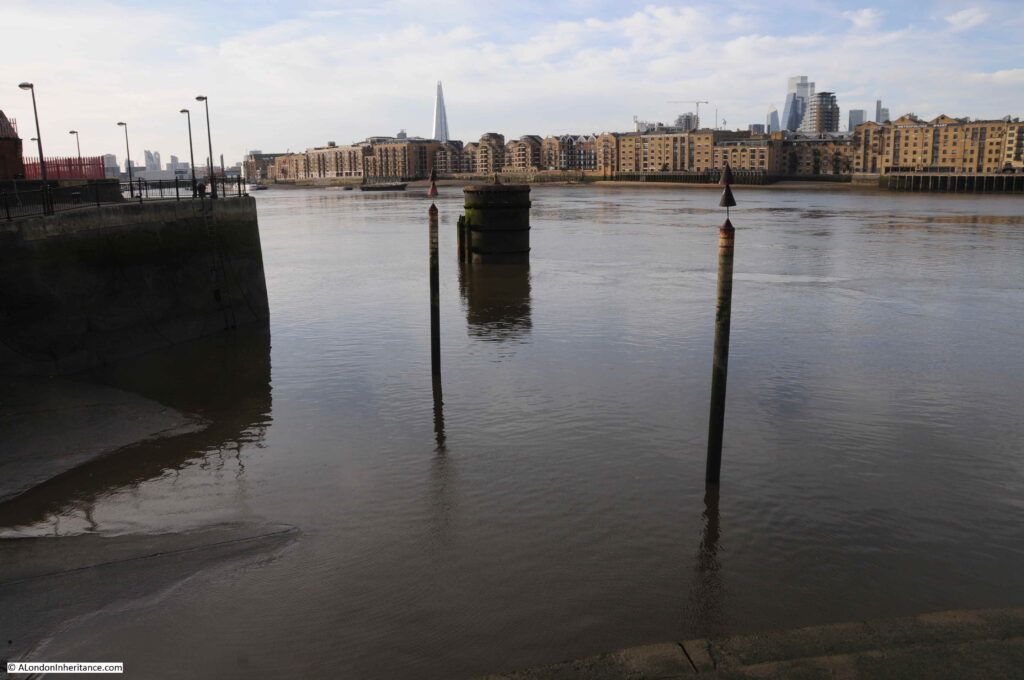 Dolphins at the entrance to docks were also used as a type of fender where the dolphin provided something for a ship to gently hit up against, and as an aid to align and position the ship.

At the entrance to a dock this may have helped a ship enter or exit the dock rather than drift further up or down stream.

Whatever the use of the dolphin, I assume it is now redundant as the docks have long since closed, with the majority disappearing under new building, and the entrance from the lock into Surrey Water closed off by Salter Road which runs across the old entrance into the basin.

The entrance does have an interesting base, which appears to be composed of metal plates. 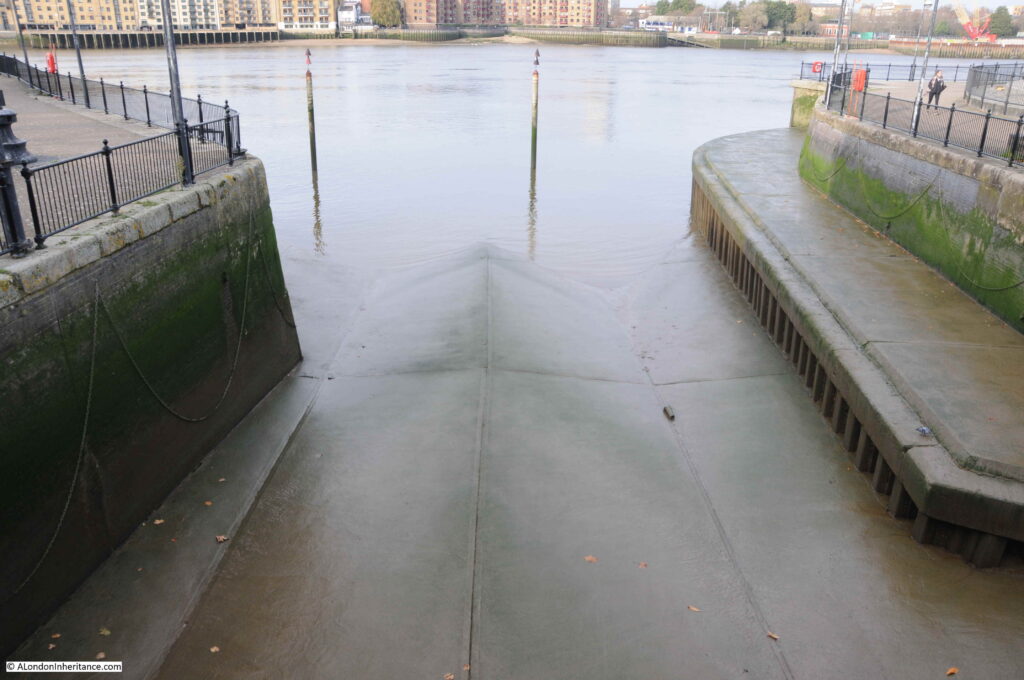 Facing out of the dock, towards the Thames, the tunnel air shaft is on the left, and a large pub, the Salt Quay, on the right: 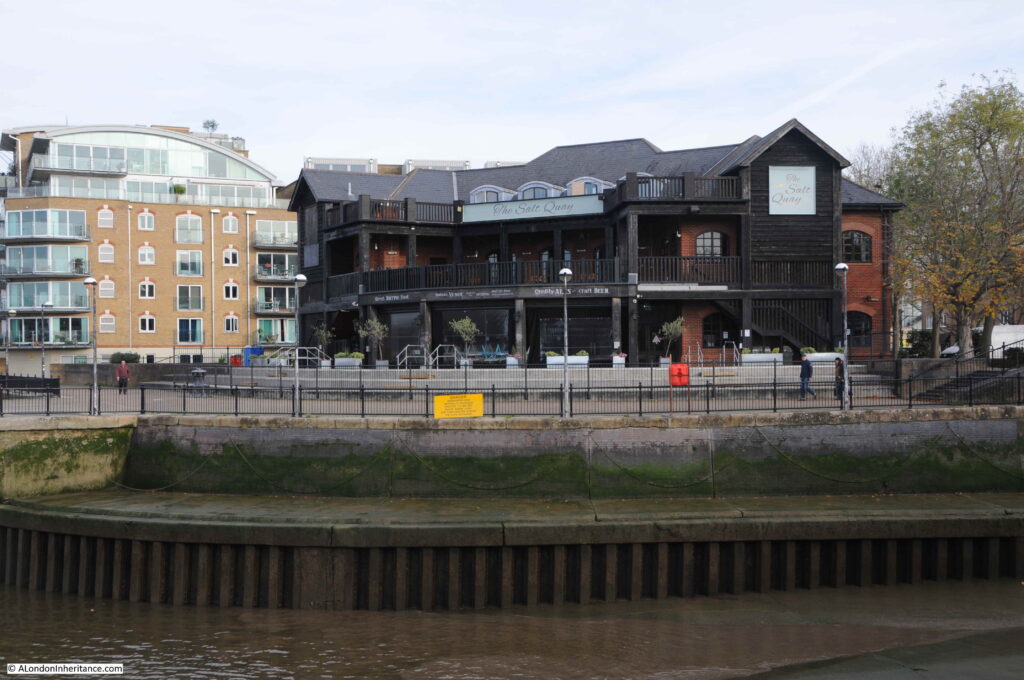 Looking in from the river, along the Surrey Lock, and a rolling lift bridge can be seen, carrying Rotherhithe Street across the lock. 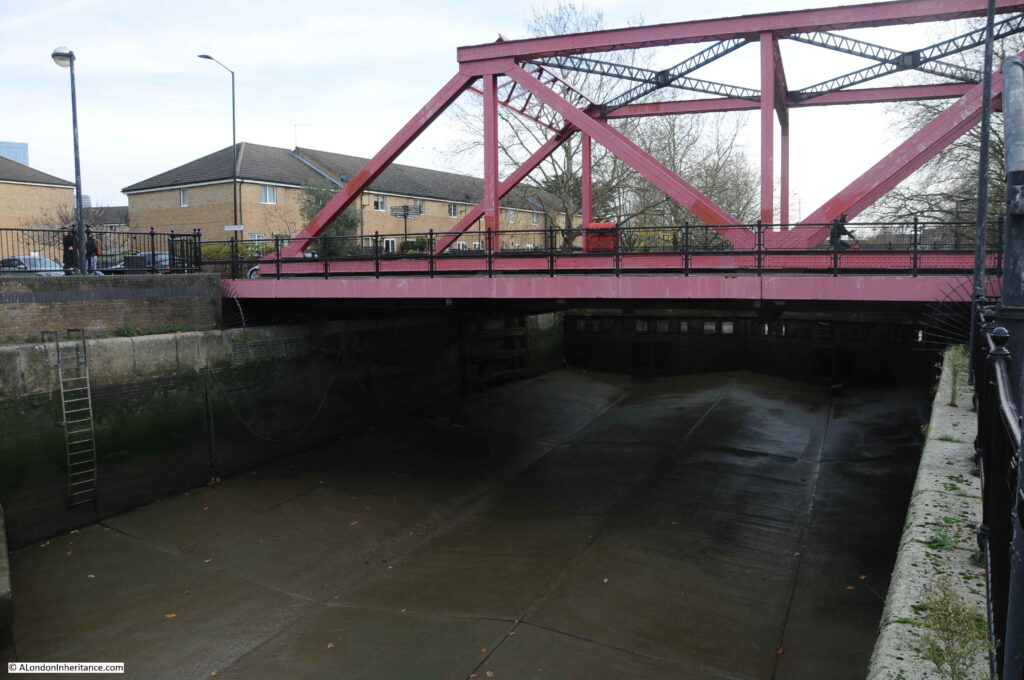 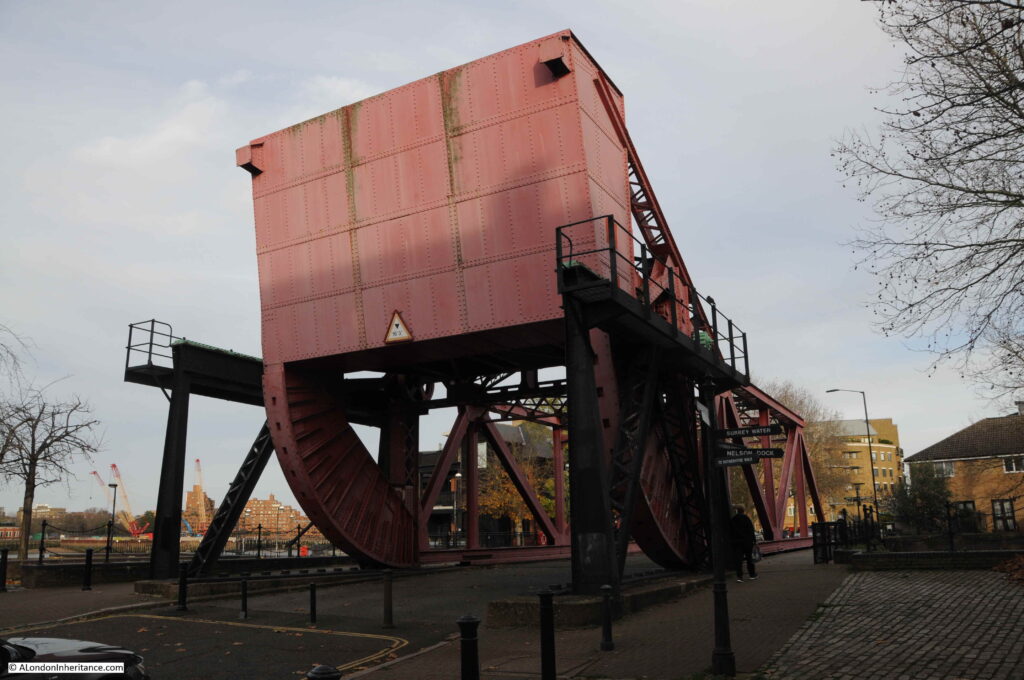 When the bridge opens, the counter weight moves to the ground, rolling the deck of the bridge upwards. The following photo shows the bridge in action, with the deck fully raised to allow ships to move from the lock and into the docks. 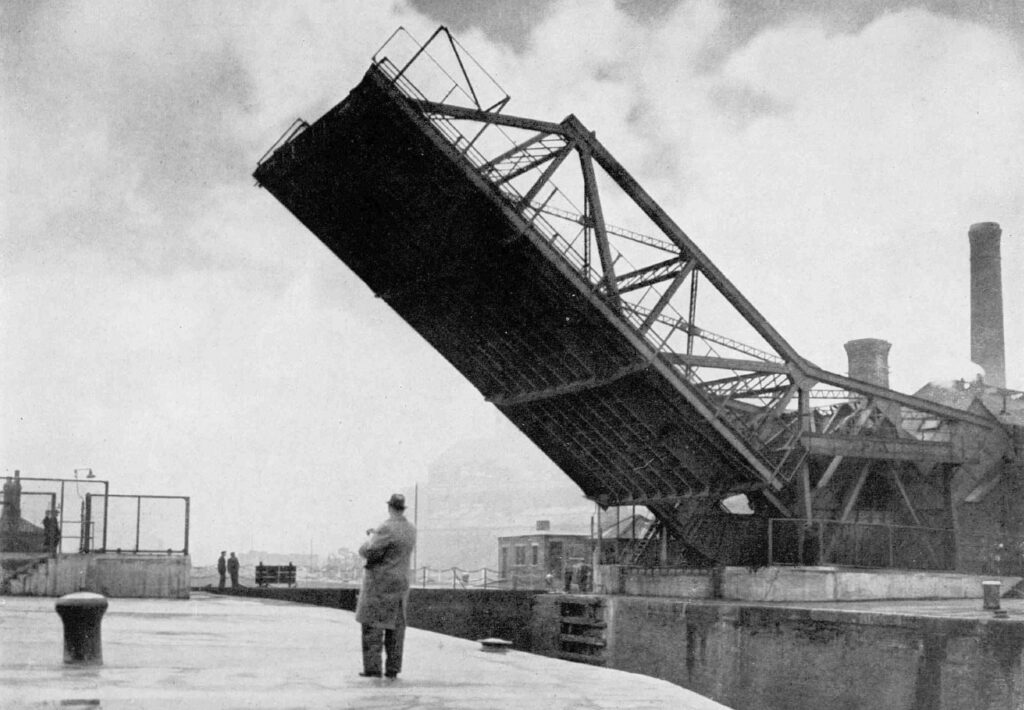 The above view is looking south-west from the Thames. The chimneys in the background are at the Rotherhithe Gas Works which I covered a couple of weeks ago.

The docks were a prime target for bombing during the last war, and the original bridge was badly damaged in September 1940. Whilst it could continue to provide a road across the dock, it could not lift, so only barges were able to enter, not the usual sea going ships that would have normally entered the docks via this route.

The original bridge was built in 1858 as part of the development of the dock complex, but was finally replaced in 1952 when the new bridge was completed and opened by Viscount Waverley, the chairman of the Port of London Authority.

When the bridge was opened, it was reported that “the people of Bermondsey will again be able to observe the daily spectacle of sea-going ships on their way in and out of this dock entrance”.

The bridge also had a wider roadway than the original bridge, along with improved approaches to the bridge which would help with the substantial volume of road traffic along Rotherhithe Street.

The bridge cost £110,000 to construct, and the fine balance of bridge and counter-weight enabled the 720 tons of the bridge to be raised or lowered in three minutes, by just a 50 horse power electric motor.

Newspaper reports of the time stated that “incorporated in the main structure are 100 tons of cast-iron blocks from an old bridge across the river at Limehouse”. An intriguing statement that I have not had the time to research.

The bridge today sits quietly in an area that those who attended the 1952 opening would be hard pressed to recognise, the area having been significantly redeveloped after the closure of the docks. 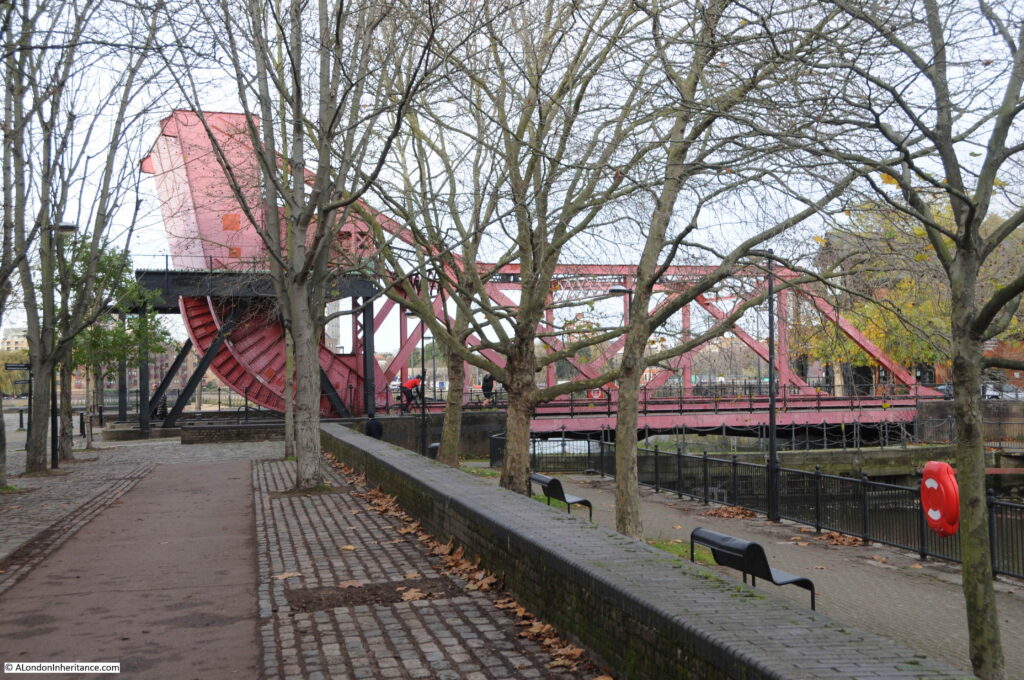 The following photo is looking from the bridge, along the Surrey Dock towards where Salter Road now closes off the entrance to the basin. Salter Road being part of the development of the area after the closure of the docks. 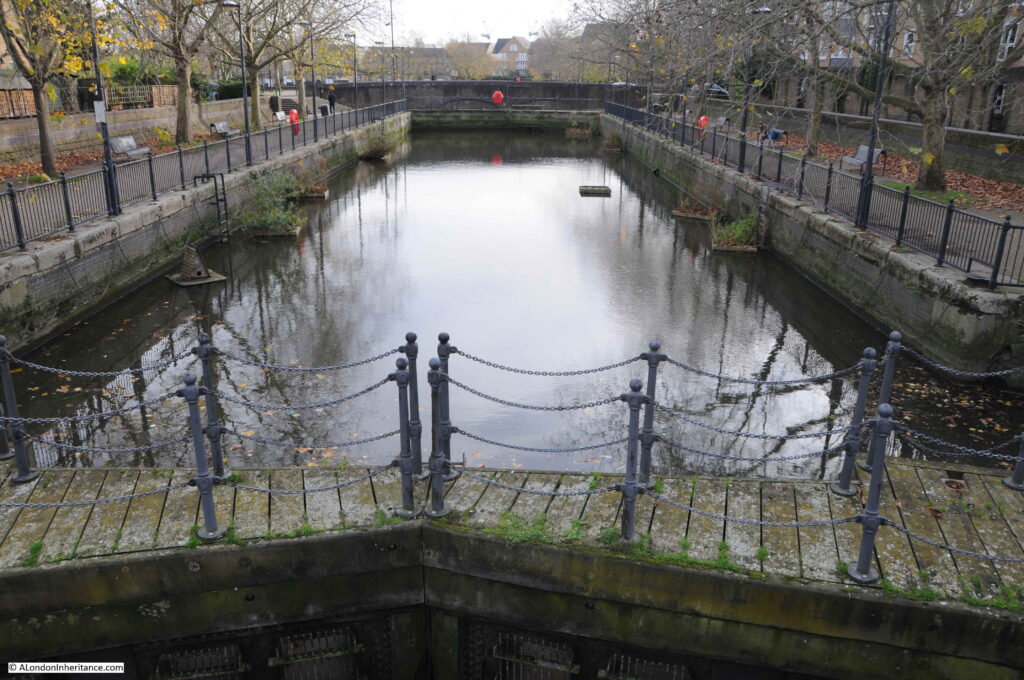 The dolphin at the entrance to the Surrey Lock is a reminder of the sea going shipping that once was so common on this part of the river, and that would have either moored on the dolphin, or used it as an aid to enter or leave the dock.

The Surrey Commercial Docks to give the dock complex their full name is an area I have yet to explore. My father took more photos of the area, so hopefully some return visits in 2021.