In 1947 my father was standing on the north bank of the River Thames, slightly west of Blackfriars Bridge, and took this photo looking across the river to the Oxo tower on the south bank and a sign on the river for HMS President. 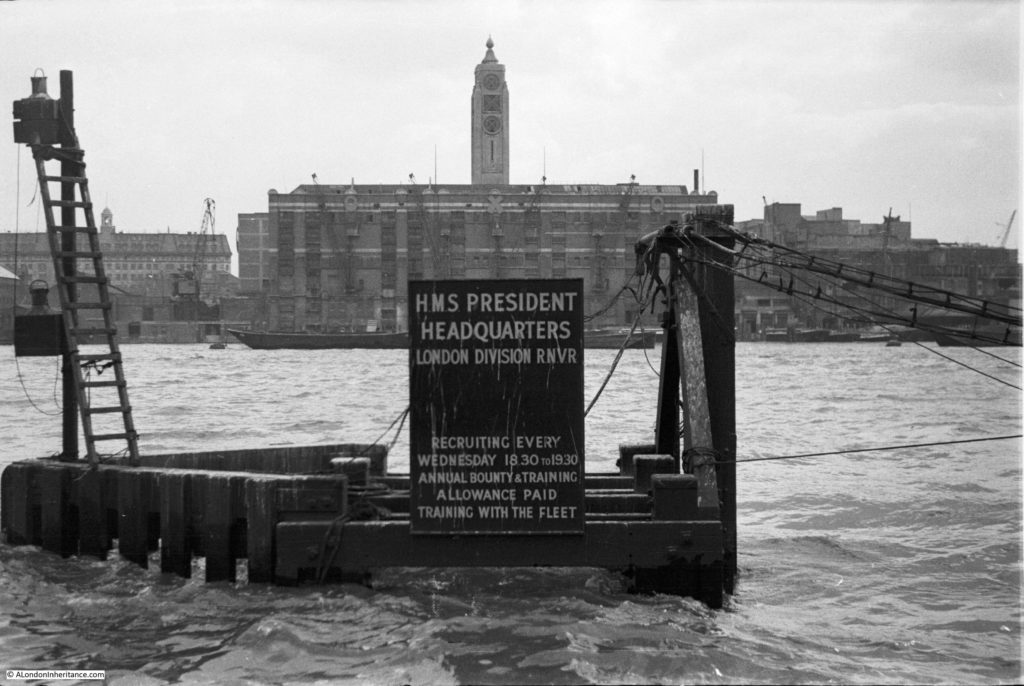 72 years later, I took a photo of the same view: 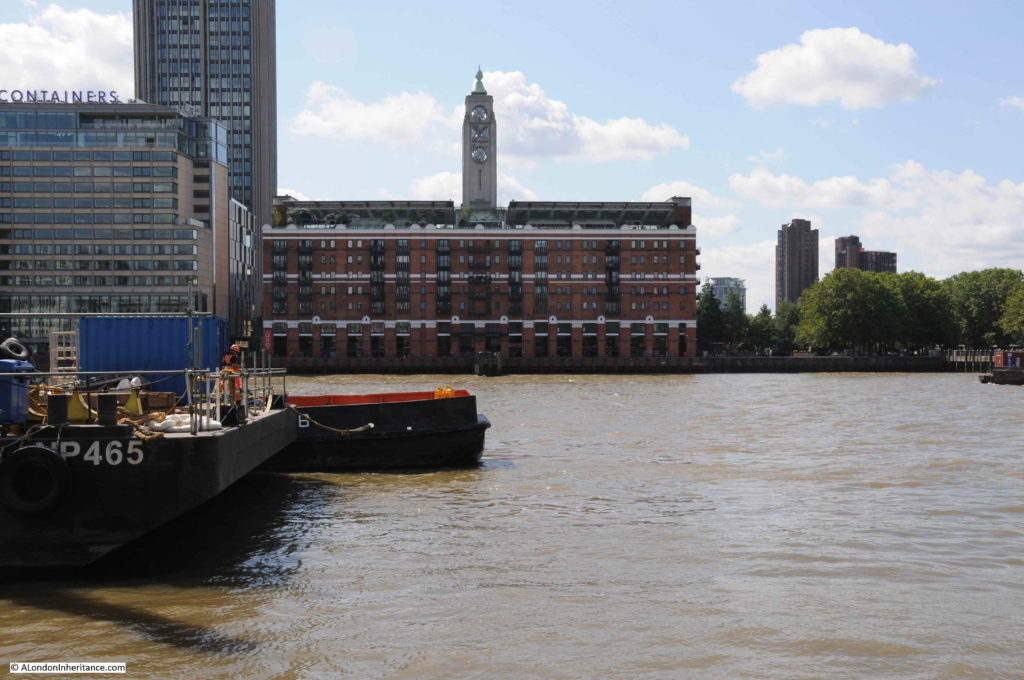 The Oxo tower is still there as a significant south bank landmark, although the rest of the south bank view in the original photo has changed considerably.

All trace of HMS President has disappeared.

Up until the 1988 move to a shore location, HMS President was the name given to the ship used as a base for the Royal Naval Reserve, with the first ship taking the name being used as a Royal Navy Drill Ship (before the formation of the Volunteer Reserve as it was known in 1903), being based in the West India Docks.

The ship that was temporarily away when my father took the 1947 photo, was originally HMS Saxifrage, built in Renfrew, Scotland in 1918. She was from a class of ships called Q Ships. These were ships designed as ordinary merchant ships, but heavily armed and with the aim of luring submarines into making a surface attack (believing that the ship was not armed), and therefore being able to attack the submarine on the surface, rather than the almost random dropping of depth charges.

The following photo is off HMS Saxifrage alongside a jetty, just after completion: 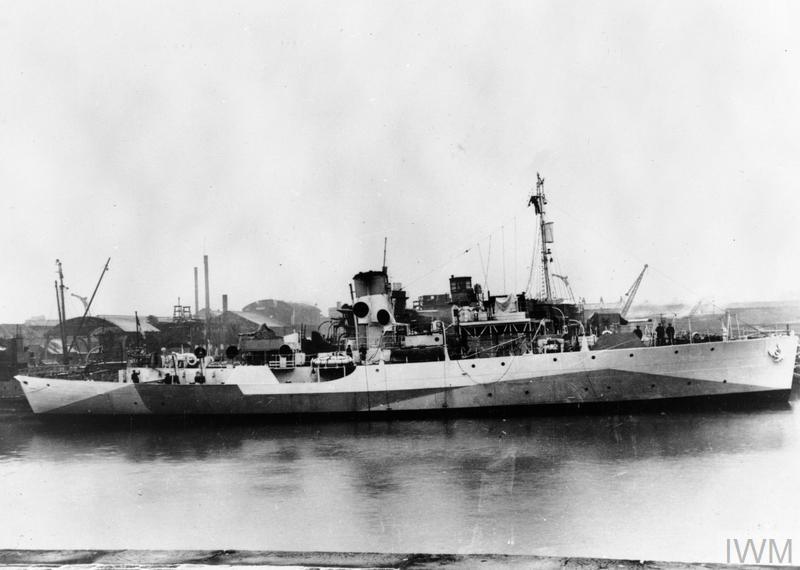 Being completed at the end of the First World War, HMS Saxifrage only saw active service in the final months of the war, including some engagements with U boats, one of which was sunk with depth charges after an exchange of gun fire. In 1922 she took on the role of the Royal Naval Volunteer Reserve ship and was moored at Blackfriars with a name change to HMS President.

Despite the Royal Naval Reserve moving onshore in 1988, the ship continued to be moored at Blackfriars as it had been sold, and was then used as a location for private events.

The ship only moved from Blackfriars a couple of years ago to make way for the building site that has taken over the location as this is now one of the construction sites for the Thames Tideway Tunnel, part of which can be seen in my 2019 photo.

Turning to look to the east from where I took the 2019 photo, this is the original entry to HMS President from the Embankment, now just a set of closed off steps leading to a drop into the river. 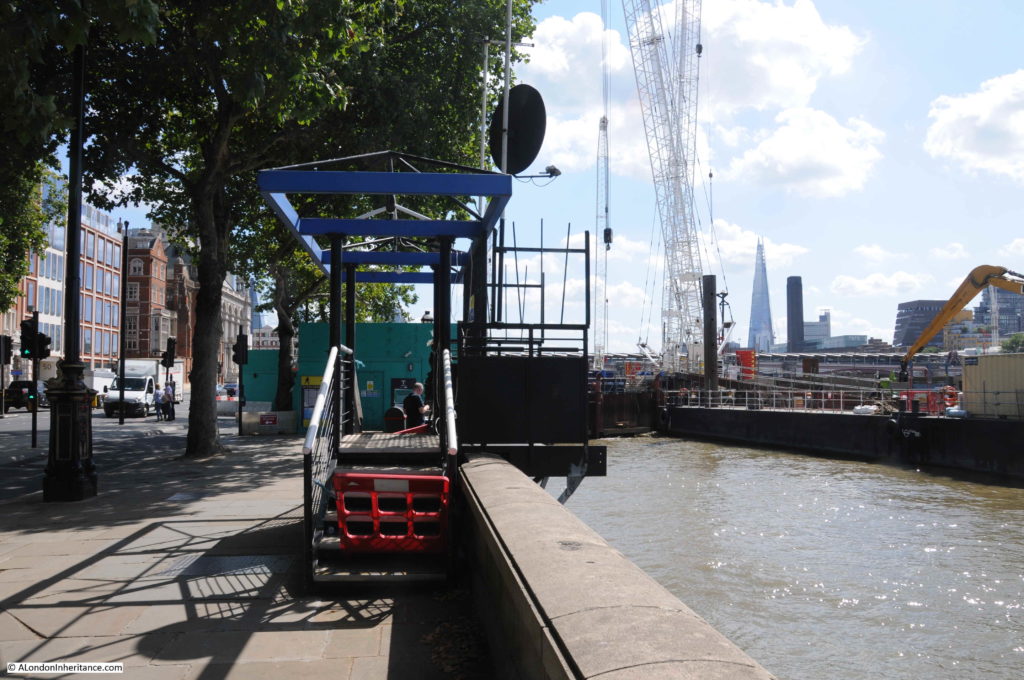 This is the view of the Thames Tideway Tunnel construction site, which was occupied by HMS President. 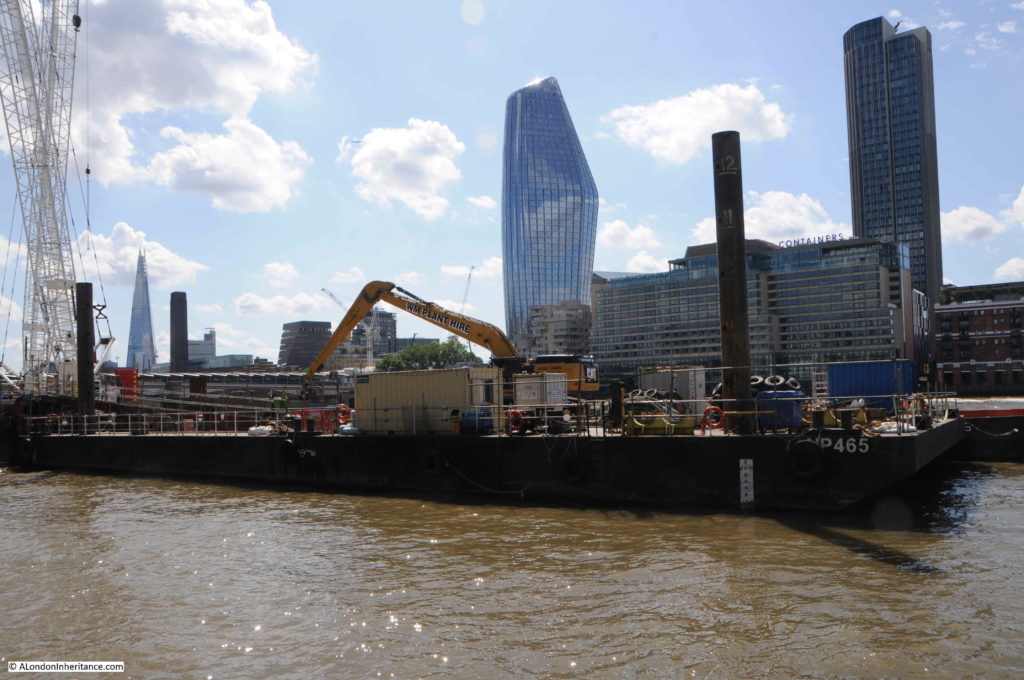 I looked back through my photo collection, and the last photo I had taken of HMS President before the ship moved, was in 2014 when the ship was decorated as a “dazzle ship”. 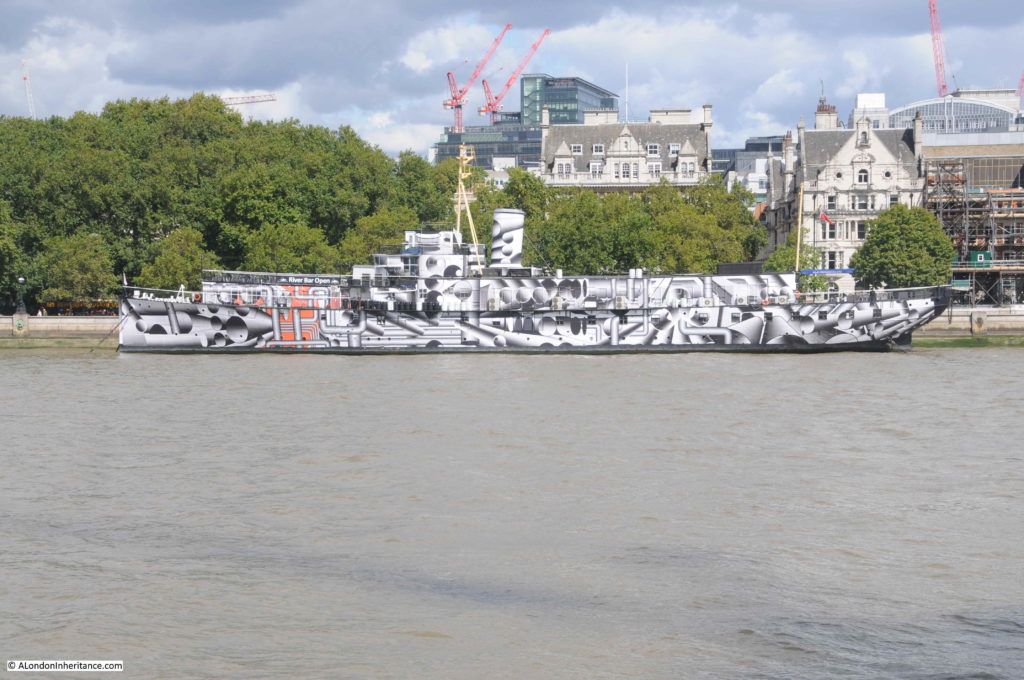 Dazzle ship camouflage was intended to optically distort the view of the ship at sea and make the ship harder to locate and attack. This method of camouflage started to be used in the First World War and the 2014 painting of the ship in this style was by the artist Tobia Rehberger as part of the 14-18 Now World War 1 centenary art commissions.

HMS President in 2014 looks very much like a ship, however this was not the appearance when the ship left Blackfriars in 1947. When HMS Saxifrage was converted to become the Royal Naval Volunteer Reserve ship, the ship was not intended to sail at sea, or indeed on the river. The ship needed to provide accommodation space for training, a drill hall and act as a recruiting centre. The hull of the ship was retained, but a series of, what can almost be described as sheds, were built along the top of the hull.

This gave HMS President a rather strange appearance, and the view of the ship on the Embankment was often criticised for its rather cobbled together construction.

The recruiting function of HMS President is clear from the sign in the 1947 photo which reads “Recruiting every Wednesday 18:30 to 19:30. Annual bounty and training allowance paid. Training with the fleet.”

Removing the ship from Blackfriars, and transporting to Chatham Dockyard where the ship would undergo a full refit and replacement of all the buildings on top of the hull, was a difficult exercise.

This photo shows HMS President being moved away from the Blackfriars mooring. The series of sheds on the top of the ship can be clearly seen. 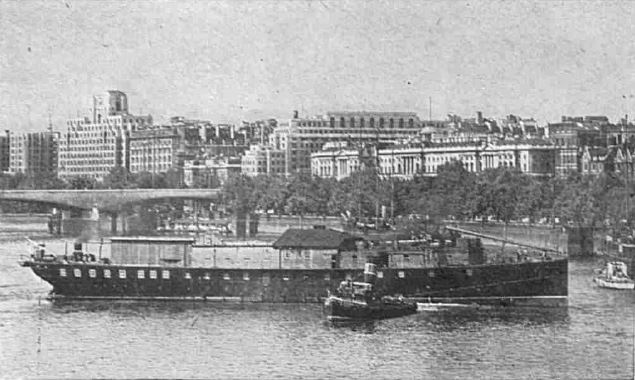 The photo below is of the ship being towed towards Blackfriars Bridge. What is interesting in the photos above and below is the difference in the views of the north and south banks of the Thames. The view of the north bank is much the same as seen today, however the industrialised south bank seen in the photo below has changed completely. Note the Shot Tower at the southern end of Waterloo Bridge. 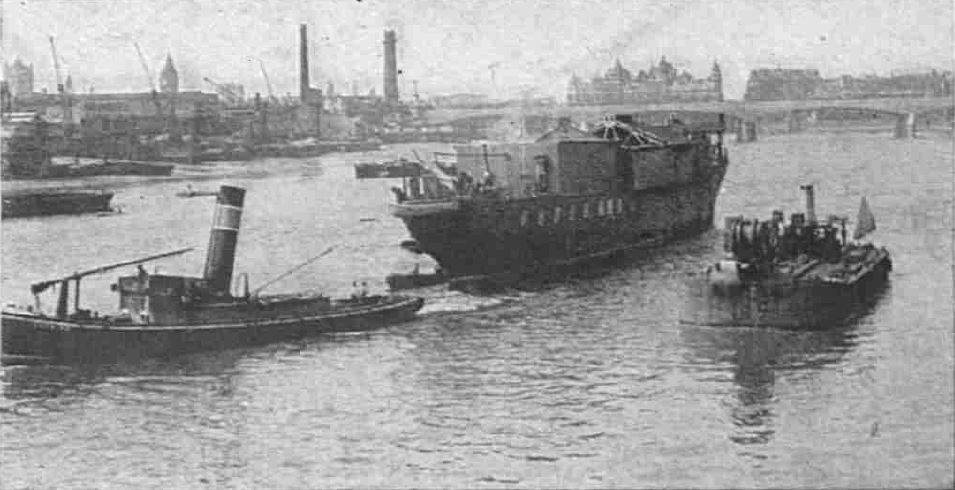 Getting HMS President under Blackfriars Bridge was a rather tight squeeze. 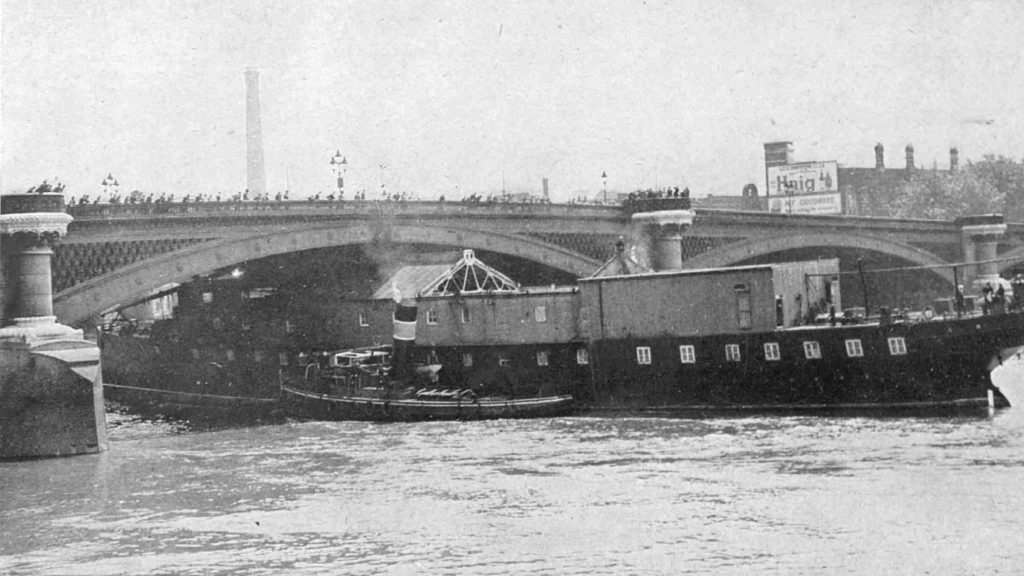 The time had to be carefully planned, as the tide had to be low enough to get the ship under the bridge, but there needed to be sufficient depth of water to ensure the ship could be floated.

When HMS President returned a few years later, the ship was restored to what would be the expected appearance of a ship, including the all important funnel, but there was still space for the Royal Naval Volunteer Reserve to carry out their training and drill activities.

The building across the river in the 1947 photo is the Oxo building with the Oxo tower. 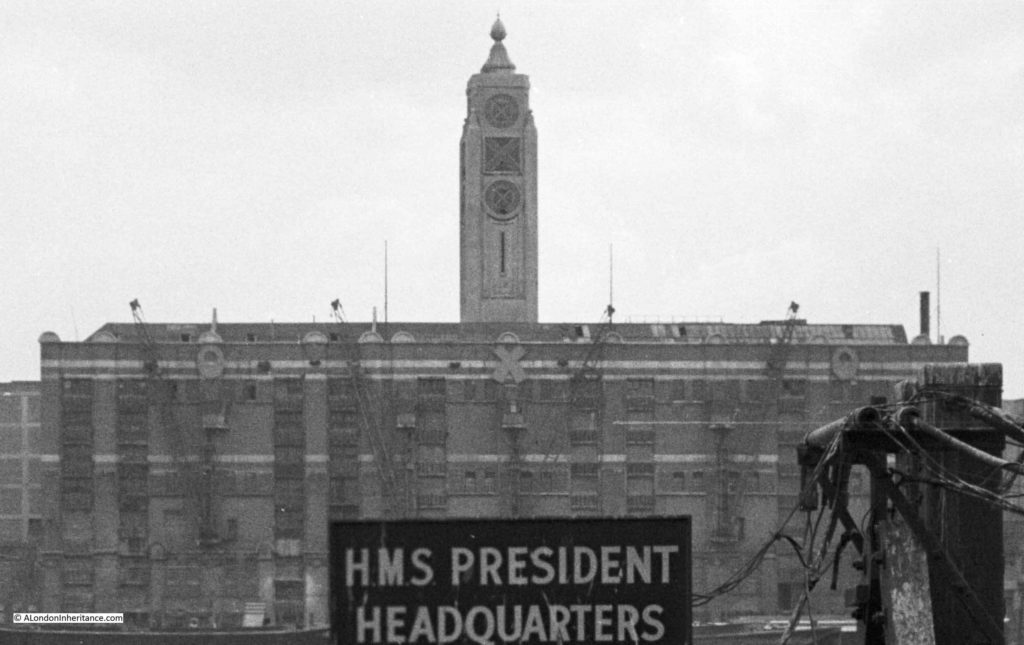 The site was originally occupied by Old Barge House Wharf, Old Barge House Corn Wharf and Iron Wharf. On the western edge of the site was Old Barge House Stairs, and these can still be found today leading down from the corner of the Oxo building. These are old stairs as they are shown on Rocque’s 1746 map of London.

The wharves were demolished in the late 19th century to make way for a power station for the Royal Mail. The site was then acquired by the Liebig’s Extract of Meat Company, manufacturer of Oxo meat extracts and Oxo stock cubes. and the new building, constructed as a cold store was completed by 1929. The original facade of the power station was retained, with the rest of the building demolished to create the new cold store.

I have no idea whether this is true, however in the 1947 photo you can also see the name Oxo in large letters across the top of the facade of the building.

By the 1970s, the site was empty and was in a bad state of repair. There were plans to demolish the building, along with a redevelopment of the surrounding space, however the GLC purchased the building and then sold it to Coin Street Community Builders at a substantial discount.

I suspect this would never happen today – the building would be sold at the highest price and converted to either a hotel or expensive riverside apartments.

A major refurbishment of the building took place, which included a rebuild of most of the building behind the facade and the Oxo Tower Wharf building reopened in 1996, hosting a range of specialist shops, galleries and restaurants.

Returning to the site once occupied by HMS President, I walked over Blackfriars Bridge to look back at the Thames Tideway construction site, 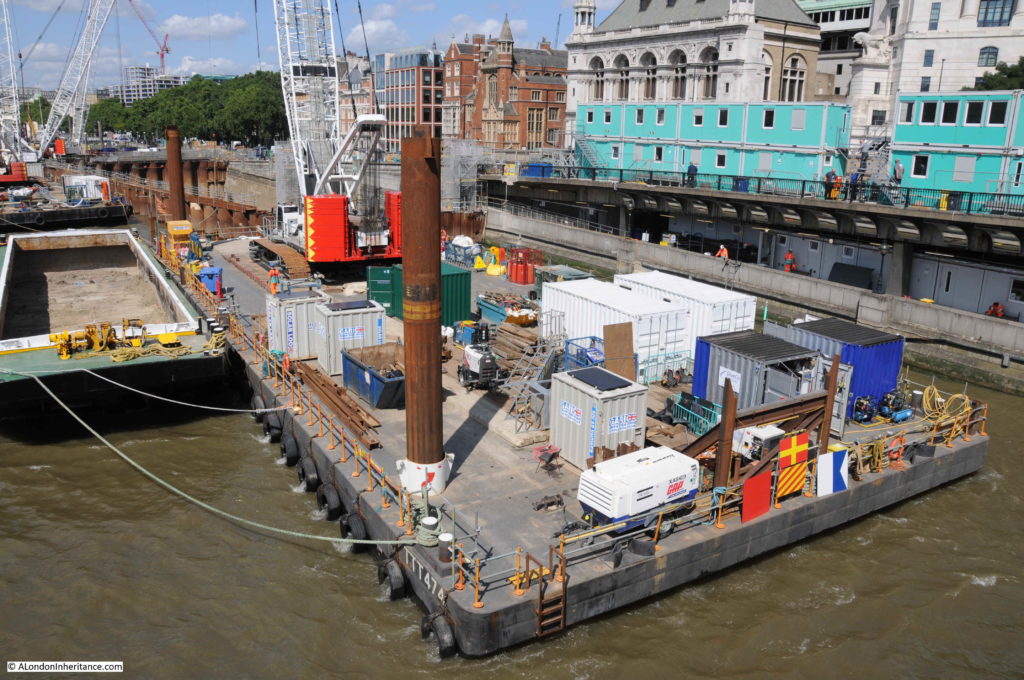 The Thames Tideway Tunnel, or super sewer as it is also known, is a major construction project, building a new intercept sewer that follows the Thames until Limehouse, where it cuts in land before reaching the Beckton treatment works. The aim of the new sewer is to intercept the sewers as they fall towards the Thames and prevent overflows into the river at times of high rainfall.

The route of the Thames Tideway Tunnel: 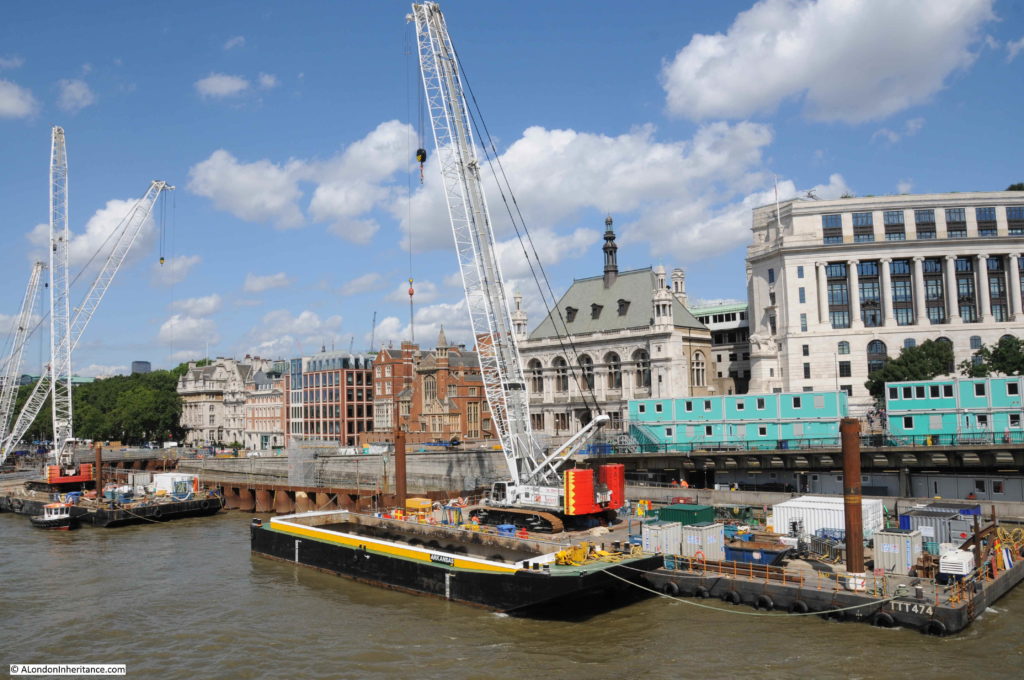 I photographed the view from Blackfriars Bridge in 2014, before HMS President moved. In this photo below, HMS President is the first ship on the right. The old Blackfriars pier is at the extreme right of the photo. 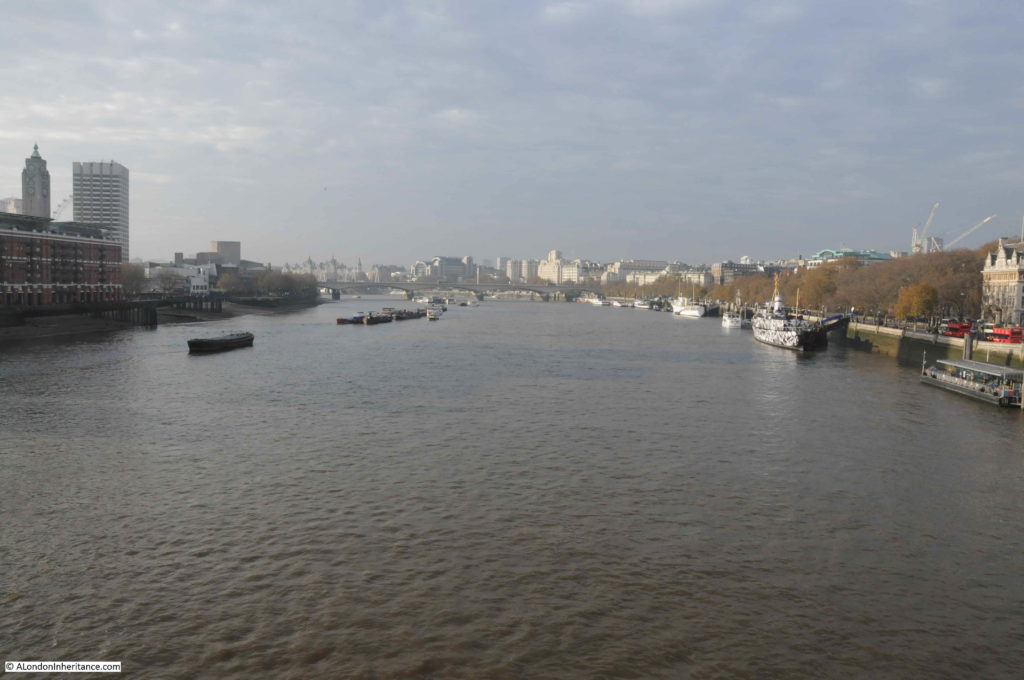 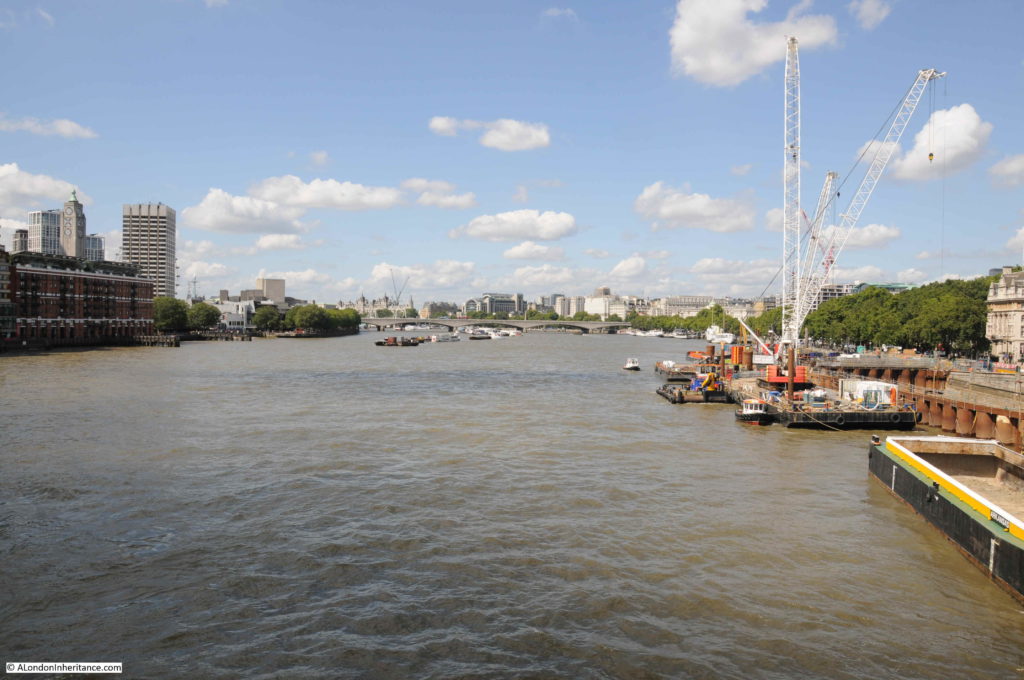 The Tideway Tunnel construction site is on the right. When construction finishes, this will be the site of the new extension of the Embankment into the river, so the view will not return to that of 2014.

Note on the left side of the photo how the Oxo Tower is not now an isolated tower on the south bank when seen from Blackfriars Bridge. The new towers around the Shell Centre buildings in the background have changed this view.

HMS President is now in Chatham docks. The name of the ship has been changed back to HMS Saxifrage and restoration work in underway.

The name Saxifrage refers to the Saxifrage genus of plants which includes the variety London Pride – so a tenuous London connection between the original name of the ship, and the city where she would spend so many years.

HMS President was not the only naval training ship on the river along this section of the Embankment. HMS Chrysanthemum (which provided additional space for the naval reserve), was moored a short distance further west, and opposite Temple underground station was a ship used by the Sea Scouts.

To finish this week’s post, here is an extract from my father’s write up of his wartime diaries from the year 1942, where he talks about being a Sea Scout on a Thames training ship and their activities along the river:

“Opposite Temple Station lay the S.S. Discovery, the ship in which Captain Scott had sailed to the ant-arctic. The ship was used by the Sea Scouts which I had joined, and permanently manned by a small crew of teenage orphans, presided over by a grizzled old salt whose party piece was to accurately spit into the Galley Stove. My group, the Saint Pancras Sea Scouts, based at Tufnell Park, and very proud to be allotted Captain Scott’s cabin, would meet there every Sunday, to be taught seamanship and river craft. Part of our ‘job’ on the river was to sail a Whaler, several of us on either side of the boat, one oar each, the Skipper in the stern, a lookout in the bow, as far as Tower Bridge in one direction and Pimlico in the other, dependent on fog which could be hairy with a steamer bearing down on us.

Sea Scouts were an unpaid adjunct to the River Police so as we journeyed along the Thames, barges and lighters would be boarded to check that all was secure, and anything suspicious investigated.

A crowd would always be gazing at us from the Embankment, and if any pretty young girls were to the fore we would show off by performing dangerous climbs on the rigging, and I would eat my sandwiches suspended hammock like on the cables underneath the bowsprit.

However, my greatest claim to fame and humiliation was to loose my footing on the slippery gangway and fall into the cold and filthy river. the whole of Sunday afternoon was spent below decks trying to dry my sodden clothes over the stove.”

8 thoughts on “HMS President and the Oxo Tower”