Baldwin’s Gardens is a street that runs between Leather Lane and Gray’s Inn Road. If you take a walk along the street, you may be disappointed that the street does not live up to its name. Rather than finding any gardens, the walker will find flats, a church, school and other buildings lining Baldwin’s Gardens.

My father took the following photo of Baldwin’s Gardens in 1949. The view is looking down towards Gray’s Inn Road. In the early years of the war, the area suffered from the impact of several high explosive bombs and the effects of these can be seen to the right of the street. 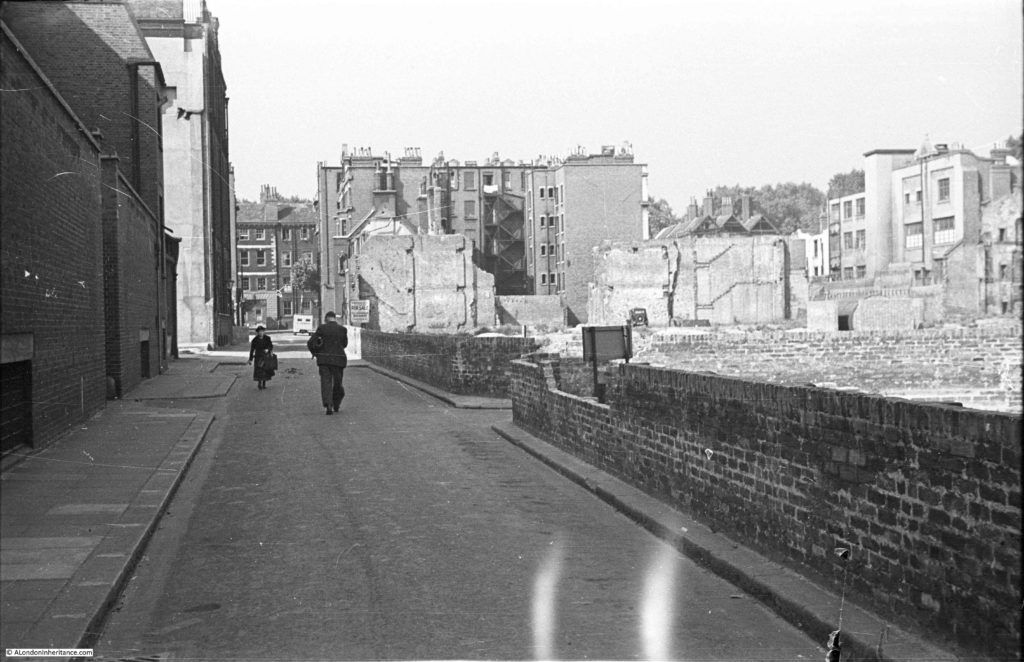 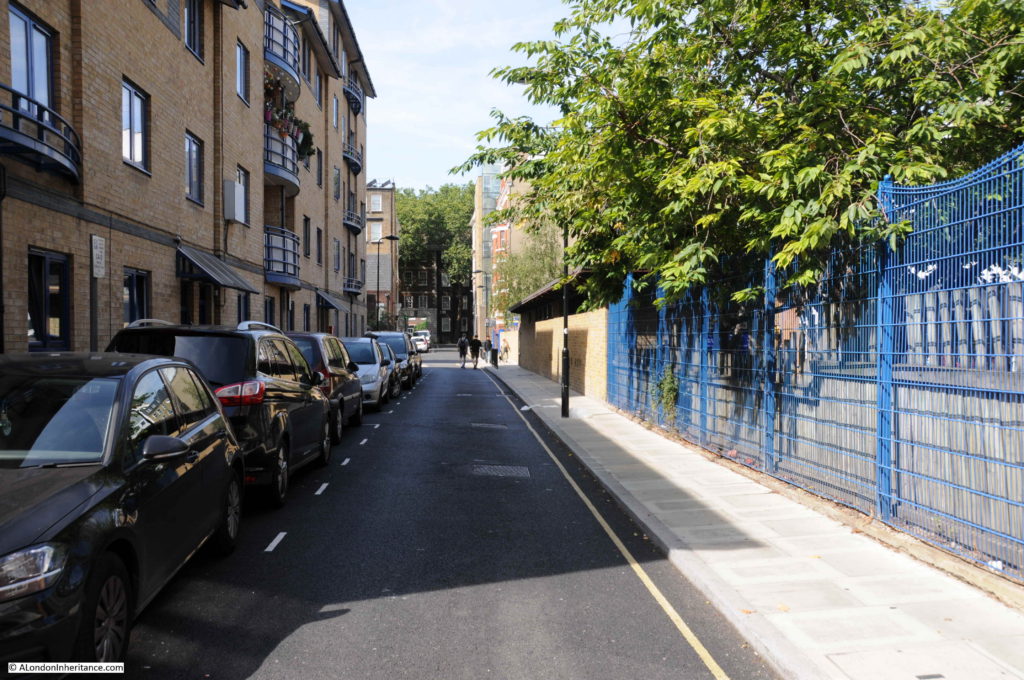 The only identifiable feature in the above two photos is the building in Gray’s Inn Road visible at the far end of Baldwin’s Gardens (although it is slightly obscured by trees in the 2018 photo). This building is part of Gray’s Inn, and one of the entrances to Gray’s Inn Square.

I took the photo below at the end of Baldwin’s Gardens to show the building today with the central block and entrance to the gardens behind being the feature visible in my father’s photo. 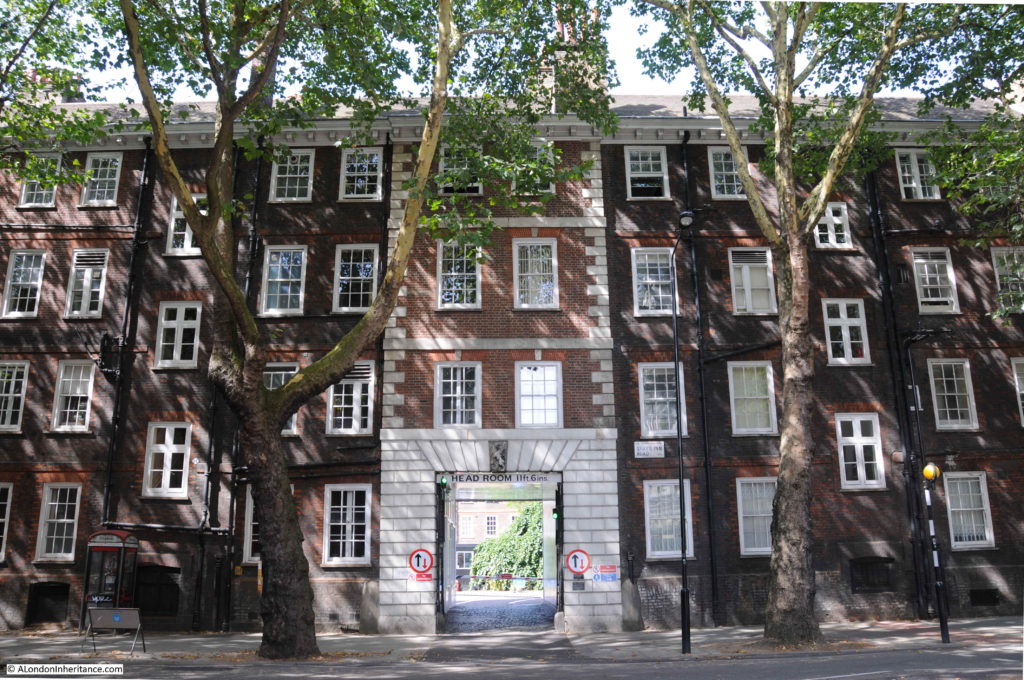 Detail from the 1949 photo shows the Gray’s Inn building: 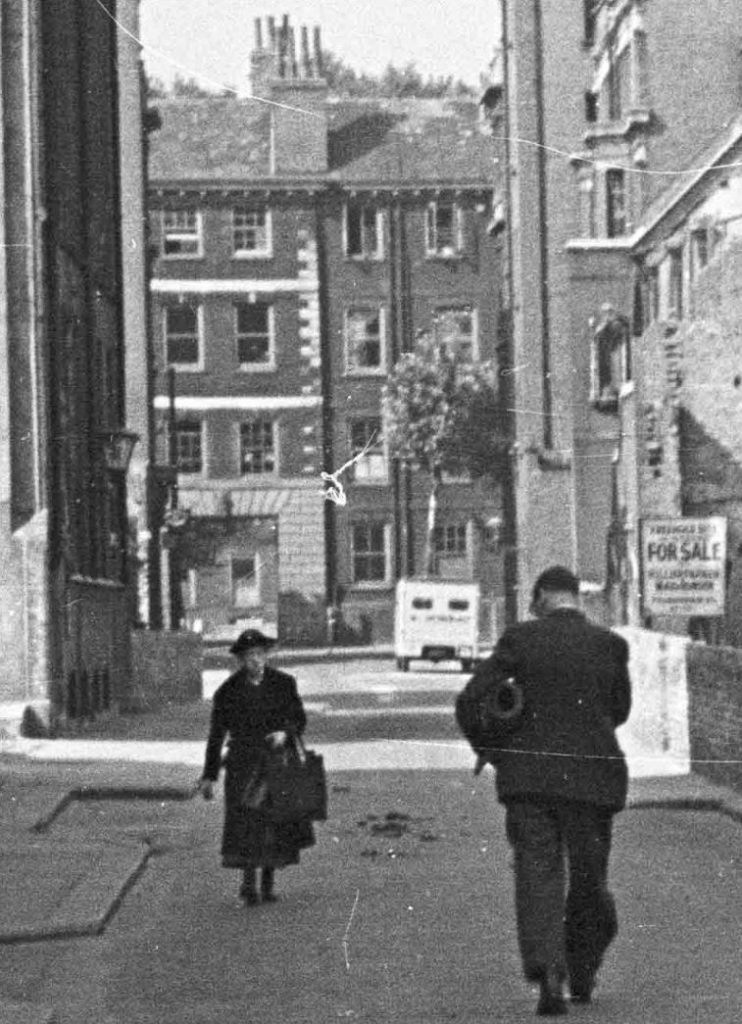 My father took a second photo looking slightly to the right of the first photo to show more of the bomb damaged area. 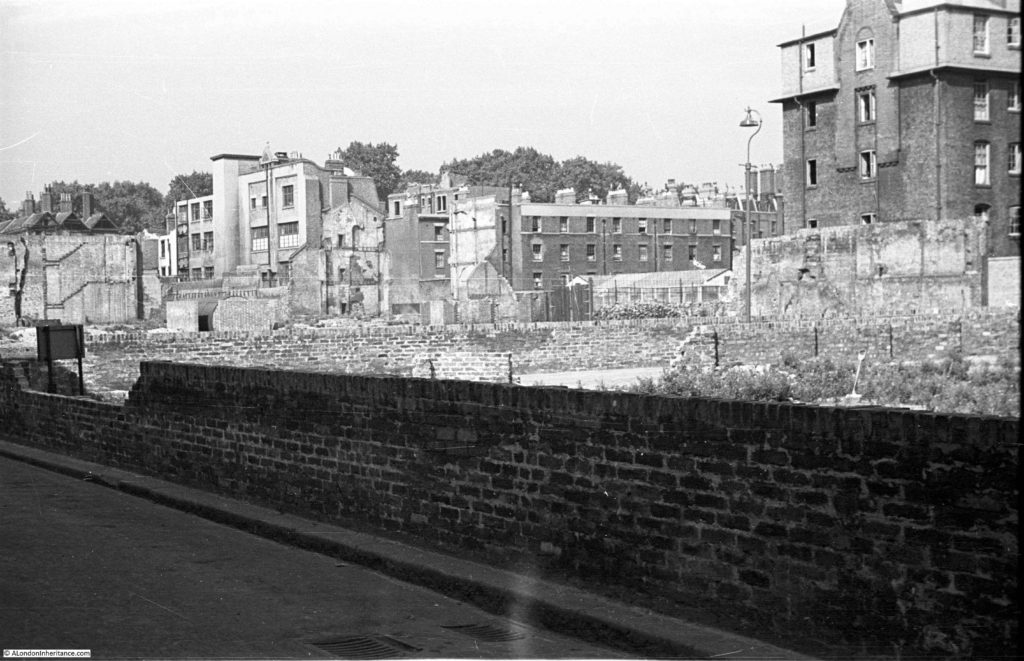 Difficult to be precise regarding the exact location due to the level of change, however looking over to the right of Baldwin’s Gardens today, and the 1949 bomb site is now occupied by a Primary School. 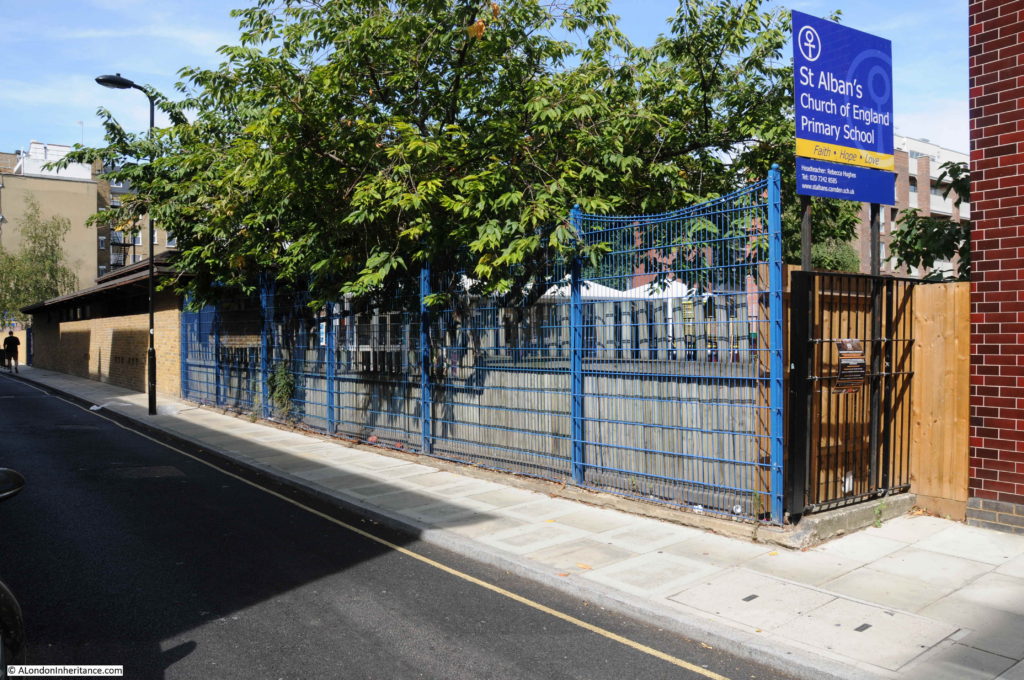 A clue as to what occupied the bomb site can be found in the extract from the 1895 Ordnance Survey map shown below from the National Library of Scotland. Baldwin’s Gardens run across the centre of the map. The upper left part of Baldwin’s Gardens is the bombed area in my father’s photo.

Just above the letter B in Baldwin’s Garden, there is an Infant School. This is in the same location as the Primary School today. Below the word Baldwin’s is St. Alban’s Church and to the upper right of the church is a school for boys and girls.

The church of St. Alban is still alongside Baldwin’s Gardens as shown in the photo below. A large brick church, completed in the early 1860s. 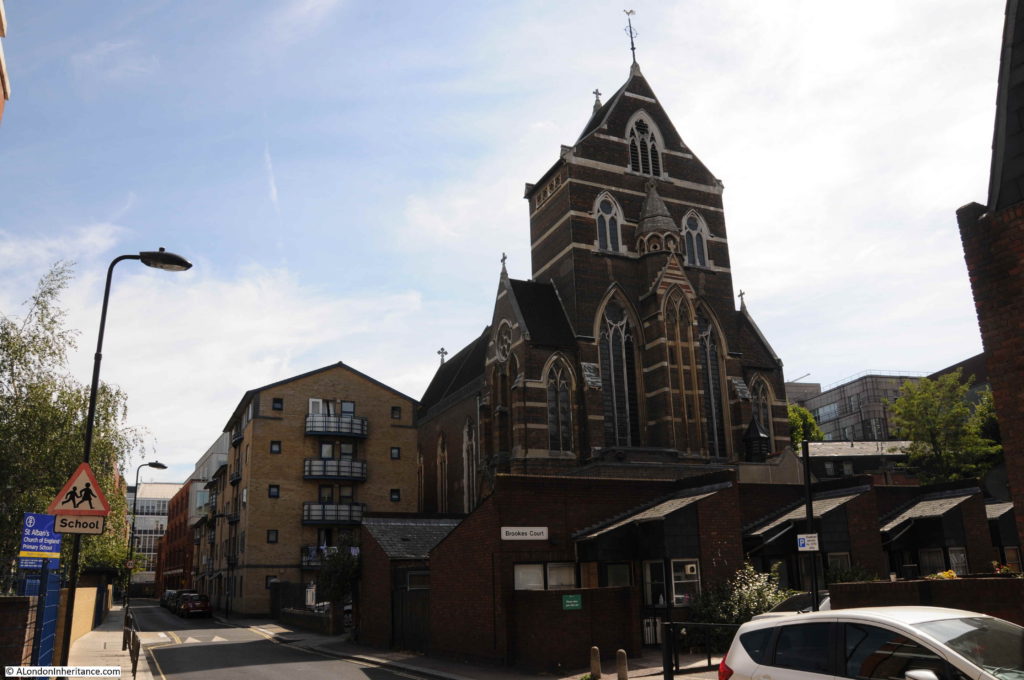 The second school on the map, marked for boys and girls has been lost although a plaque from the school can be found in the small yard between the church and Baldwin’s Gardens: 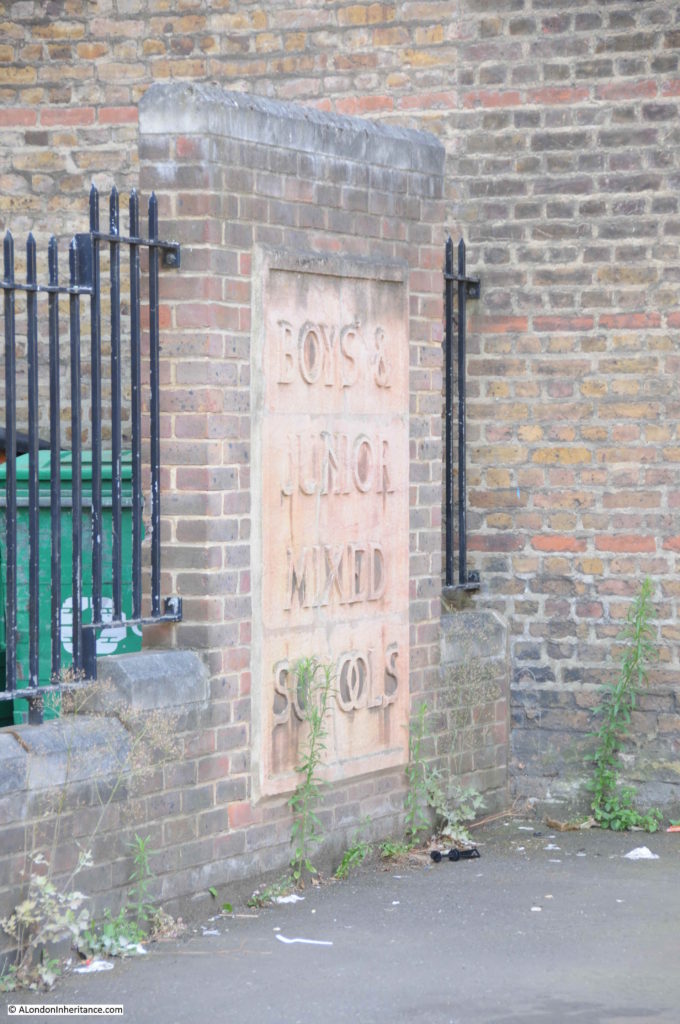 Remarkably, I found a photo of this plaque when it was on the original school. The following photo is from the London Metropolitan Archive Collage site. It is titled “St Alban’s School, Baldwin Gardens: St Alban’s Hall.” The photo is dated 1956, confirming that the northern side of Baldwin’s Gardens appears to have suffered the worst bomb damage. 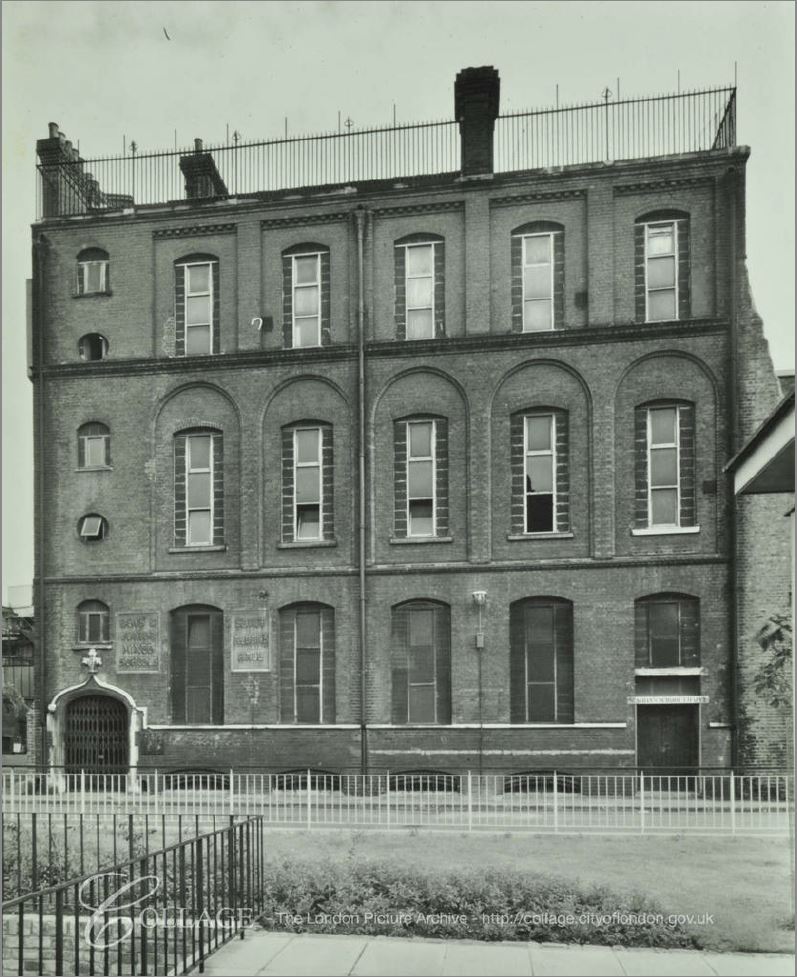 If you look to the lower left of the building there are two plaques on the wall. The one on the right is the St. Alban’s Hall, whilst the one on the left is the one that can been today as shown in my photo. The following is an enlargement of the plaque from the above photo to show it is the same: 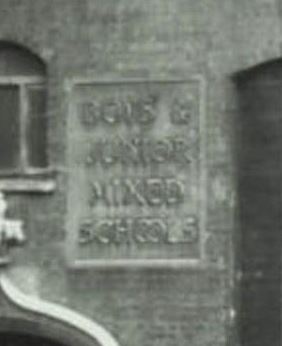 This is what I find so fascinating about walking London’s street – being able to find the traces of long lost buildings and activities and being able to trace them to their original place.

Baldwin’s Gardens schools seemed to have played a part in early teacher training. A newspaper article from 1875 comparing school education in the United States with that in the United Kingdom, and the approach to teacher training, writes: “But as early as 1811, the National Society in our own country had begun, in a rudimentary fashion, to train teachers at Baldwin’s-gardens school in London, and in 1817 the British and Foreign School Society followed with an organisation of their own for the same purpose.”

So perhaps this rather plain London side street was once a pioneer in the work of teacher training.

According to A Dictionary of London, published in 1918, the name comes from a Richard Baldwin who was a gardener to Queen Elizabeth the 1st and erected the street in 1589.

In “The London Encyclopedia” by Ben Weinreb and Christopher Hibbert, they confirm that the street was built in 1589, and add that it was on the site of Brook House, the mansion of Lord Brooke. Apparently it held the privilege of sanctuary and criminals fled to Baldwin’s Gardens to live without fear of the law. This privilege ended in 1697. The London Encyclopedia also states that “the area continued as a notorious slum, much frequented by criminals, and part of the locality known as the Thieves’ Kitchen, a training ground for young criminals.”

London by George H. Cunningham (1927) confirms the reputation of the area and adds that it was one of the most dangerous and disreputable of slums. This notoriety was removed in the building of St. Alban’s Church, and that “alterations and improvements have completely changed the appearance of Baldwins Gardens”

Baldwin’s Gardens featured in the 1746 map by John Rocque: 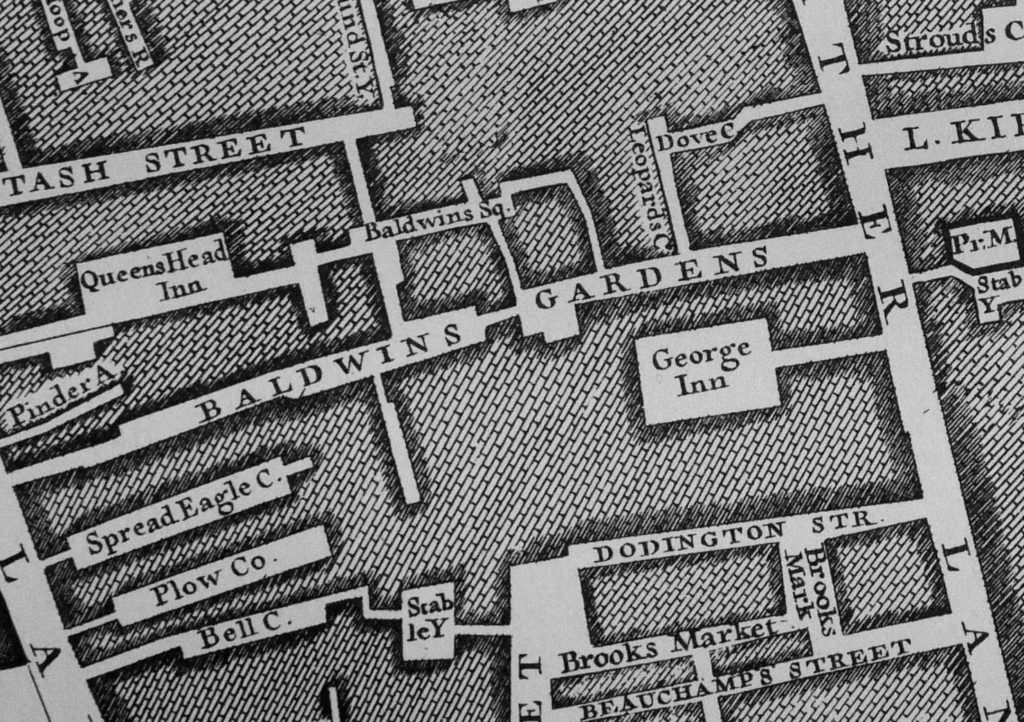 A further insight into the area can be found in my post on the nearby Hole in the Wall Passage.

In the second of the 1949 photos, a large building can be seen on the right of the photo. This is part of the Bourne Estate, a housing development by the London County Council in the first decade of the 20th century. Part of the estate can be seen from Baldwin’s Gardens: 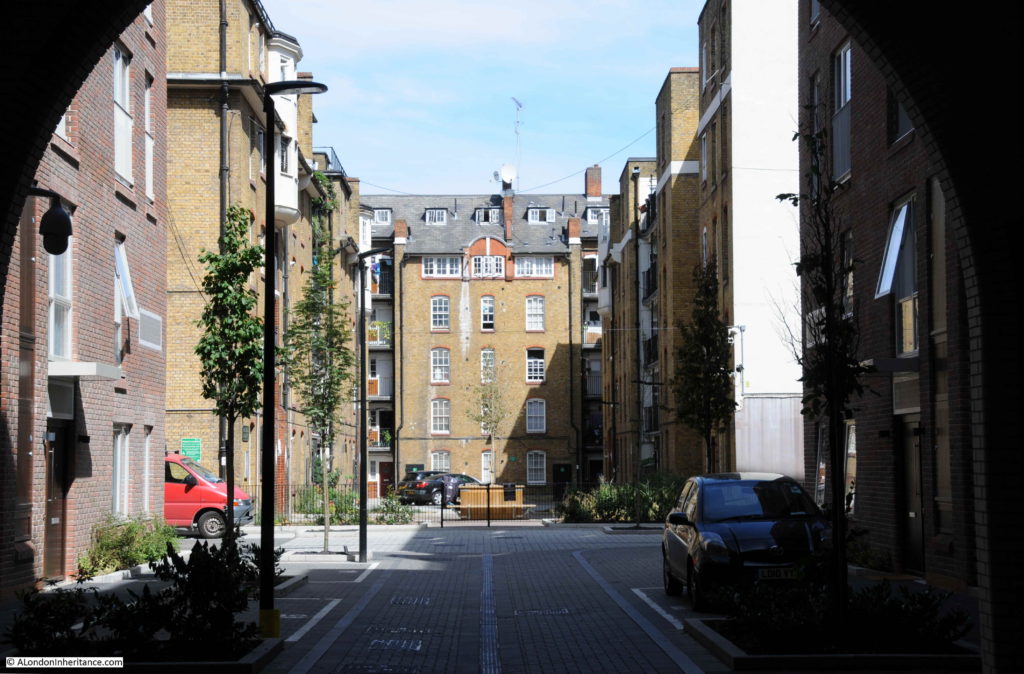 To take a look at the estate, I walked out of Baldwin’s Gardens, a short distance north along Leather Lane to Pontpool Lane where one of the main entrances to the estate can be found: 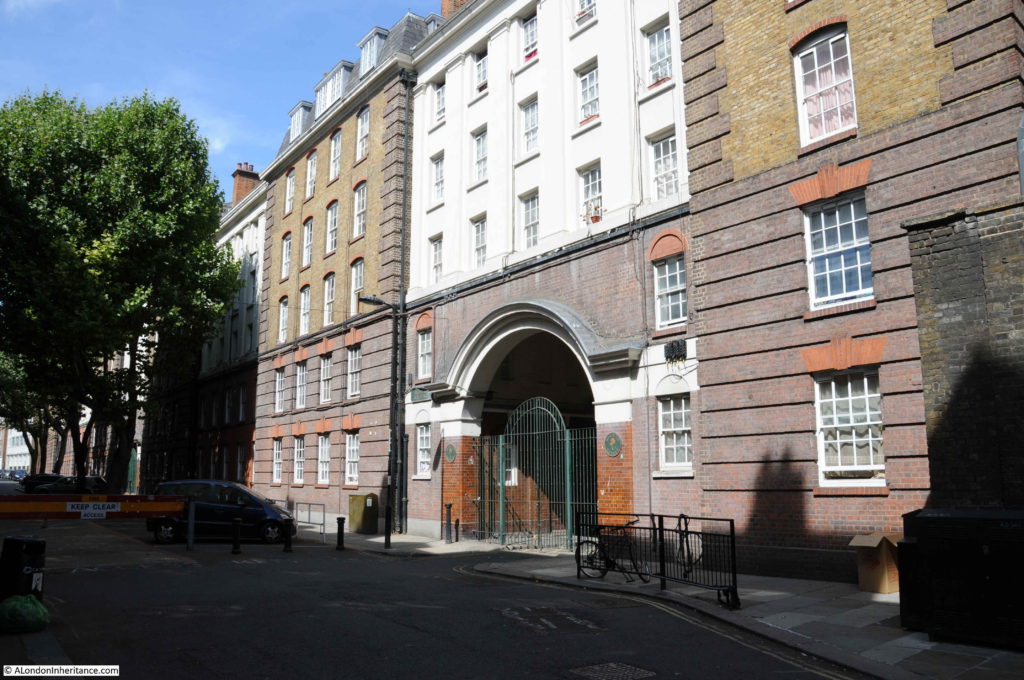 There was some damage to the estate during the war, however the majority appears to have survived. A rather impressive entrance archway leading through into the estate: 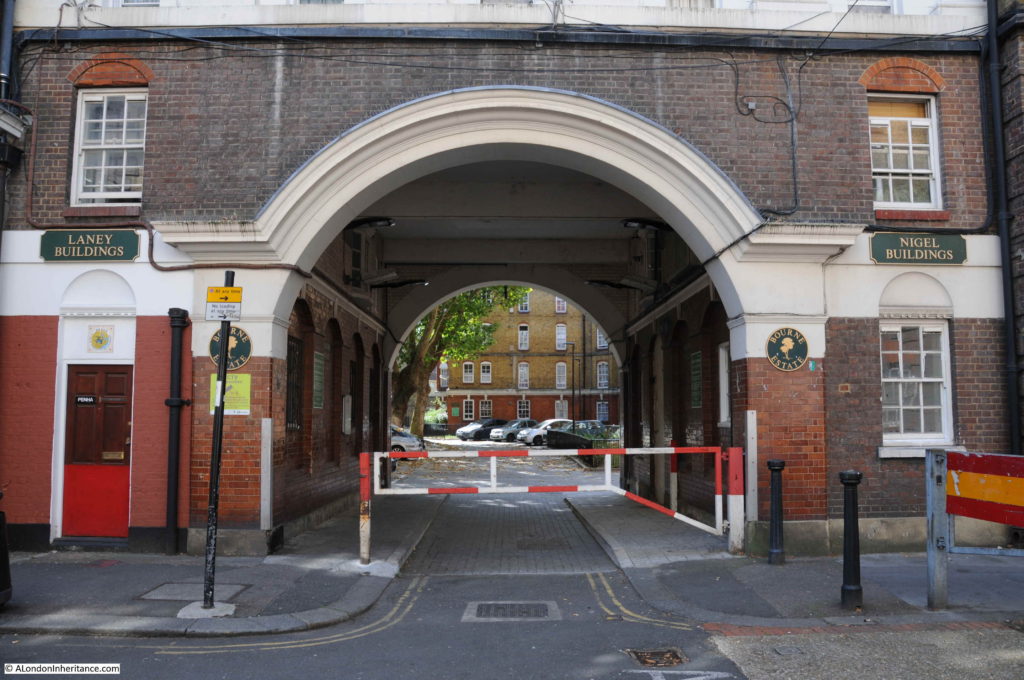 Ever on the lookout for plaques on buildings, the building on the corner of Pontpool Lane and Leather Lane has a plaque with the date 1895, presumably the date the building was constructed (seen above the Greggs sign).

There is a second plaque to the lower left: 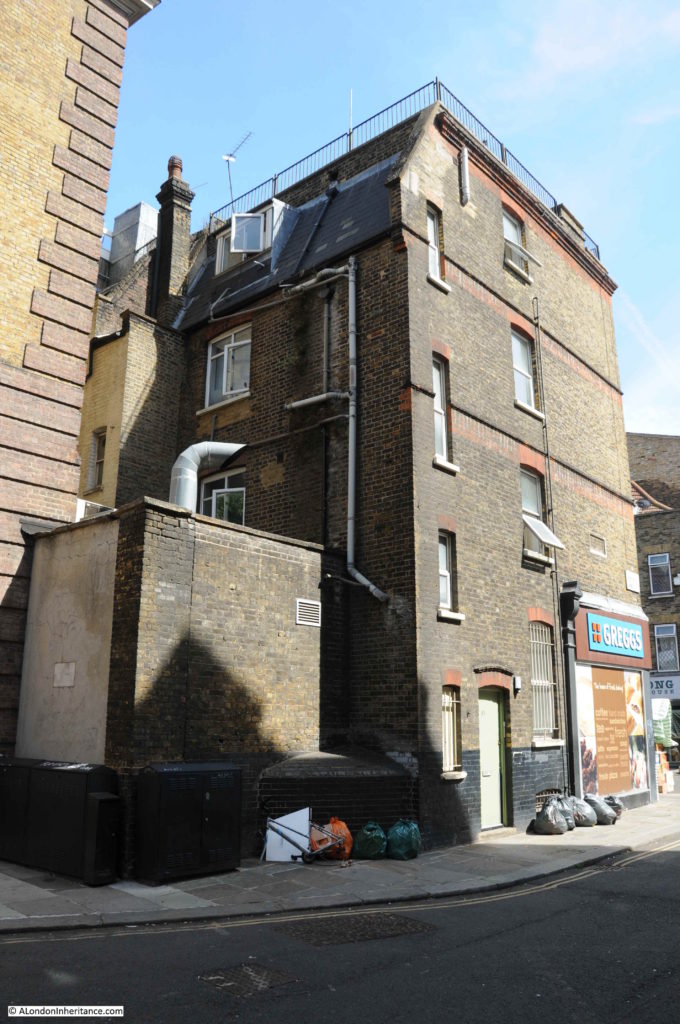 The plaque states that the wall is the property of the London County Council. 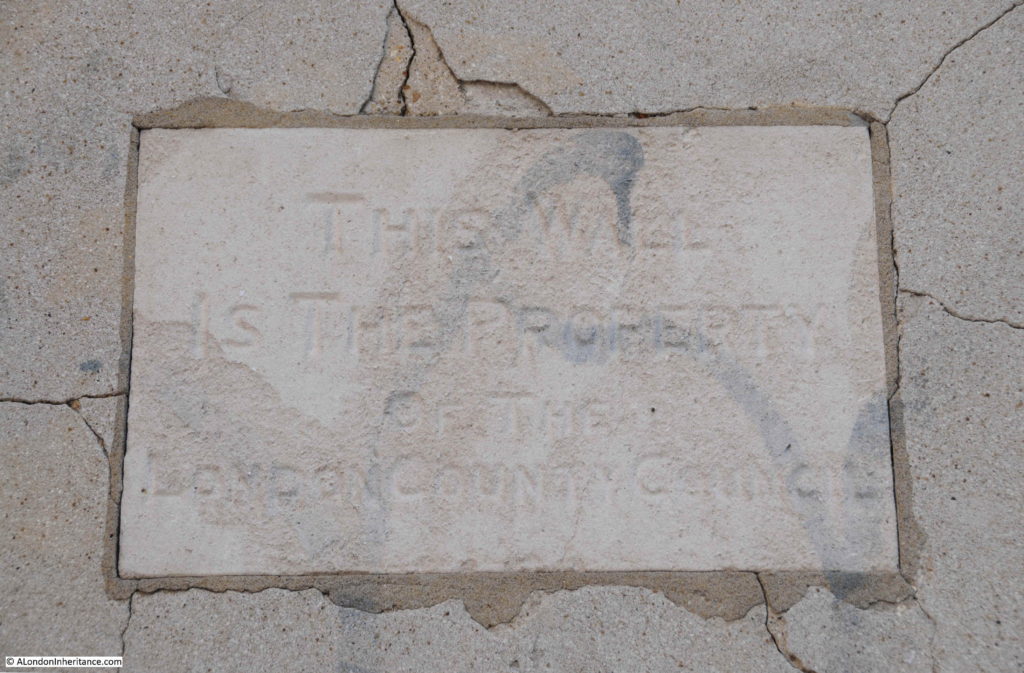 Leather Lane has a fascinating history which I hope to write about in the future, however to finish today’s post I did find a rather traditional hairdresser in Leather Lane. I always take a photo of these when I find them in London’s streets to continue the series of photos of London hairdressers started in the 1980s. 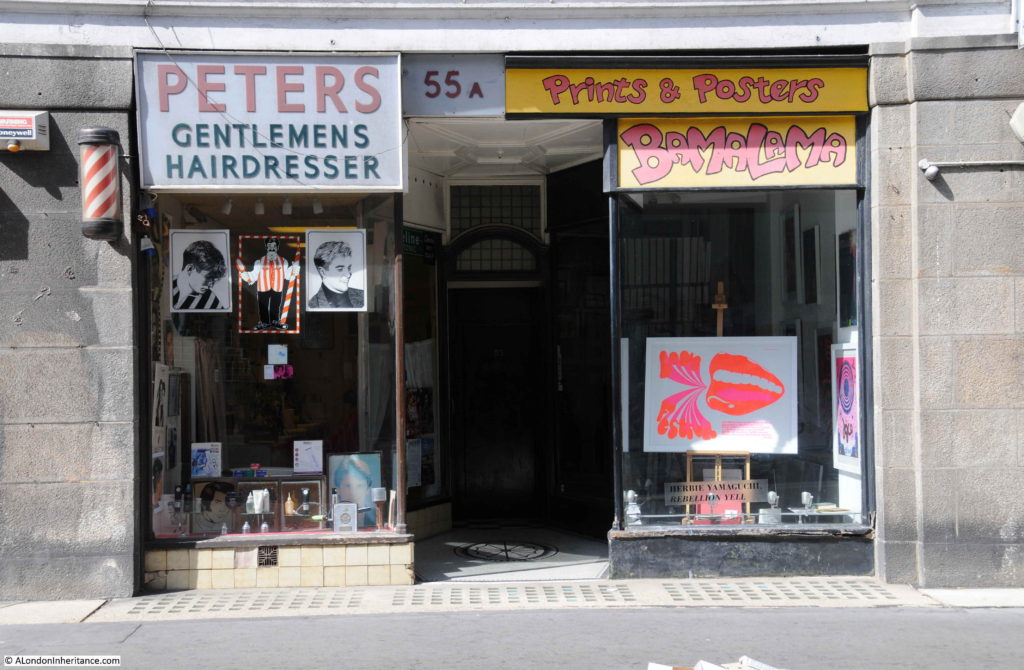 Baldwin’s Gardens is an ordinary London side street, but one that was built by the gardener to Queen Elizabeth the 1st. It was the haunt of thieves and a dangerous place until the building of the church, and the street has been host to a junior school since the 19th century – rebuilt since the wartime destruction of the previous school. There is history to be found in every street.

31 thoughts on “A Bombsite On Baldwin’s Gardens”