Last Tuesday, the 29th December 2015, was the 75th anniversary of one of the heaviest attacks on London during the 2nd World War. I featured this event last year in a post on the 29th December along with one on the St. Paul’s Watch, whose actions contributed to the preservation of the Cathedral when large areas of the rest of the City were destroyed by incendiary bombs.

Through the night of the 29th December 1940 the availability of water was a problem. Bombing destroyed water mains and the many pumps drawing water from the working water mains considerably reduced the water pressure.

Hundreds of land based pumps were used and to help with the provision of supplies of water, the London Fire Service’s Fireboats were used to pump water from the Thames ashore.

To commemorate the events of the 29th December 1940 and the bravery of the Fire Services a number of events were held in the City of London last Tuesday, including displays of Fire Engines from the time, and a procession of Fire Engines through the City at the same time as  the sounding of the original air raid sirens in 1940.

As well as the displays on land, the Massey Shaw, the last remaining fireboat from the 2nd World War put on a display on the Thames by the bridge into Cannon Street Station and Dowgate Fire Station.

I was very fortunate to be on board the Massey Shaw for the day’s events and for this weekend I have two posts about this remarkable vessel. Today, providing a brief history of the Massey Shaw and tomorrow the voyage out on the 29th December 2015.

The Massey Shaw was one of several fireboats constructed to broadly the same design for the London Fire Brigade, with the Massey Shaw being completed by J. Samuel White & Co at Cowes on the Isle of Wight on 1935. Such was their importance that in 1939, with the war looming, the London County Council placed an order for twenty Fire Boats which all saw action along the length of the Thames, including one being sunk by a bomb at Thames Haven.

Named after Sir Eyre Massey Shaw, the first chief fire officer of the Metropolitan Fire Brigade (from 1861 to 1891), the Massey Shaw was designed with a shallow draught to allow access along the Thames, under bridges and into the creeks feeding into the river at nearly all states of tide.

The following photo shows the Massey Shaw along with two other fireboats in the Thames at Lambeth in front of the headquarters of the London Fire Brigade. Their low design ensures they can pass under bridges in almost all states of the tide. 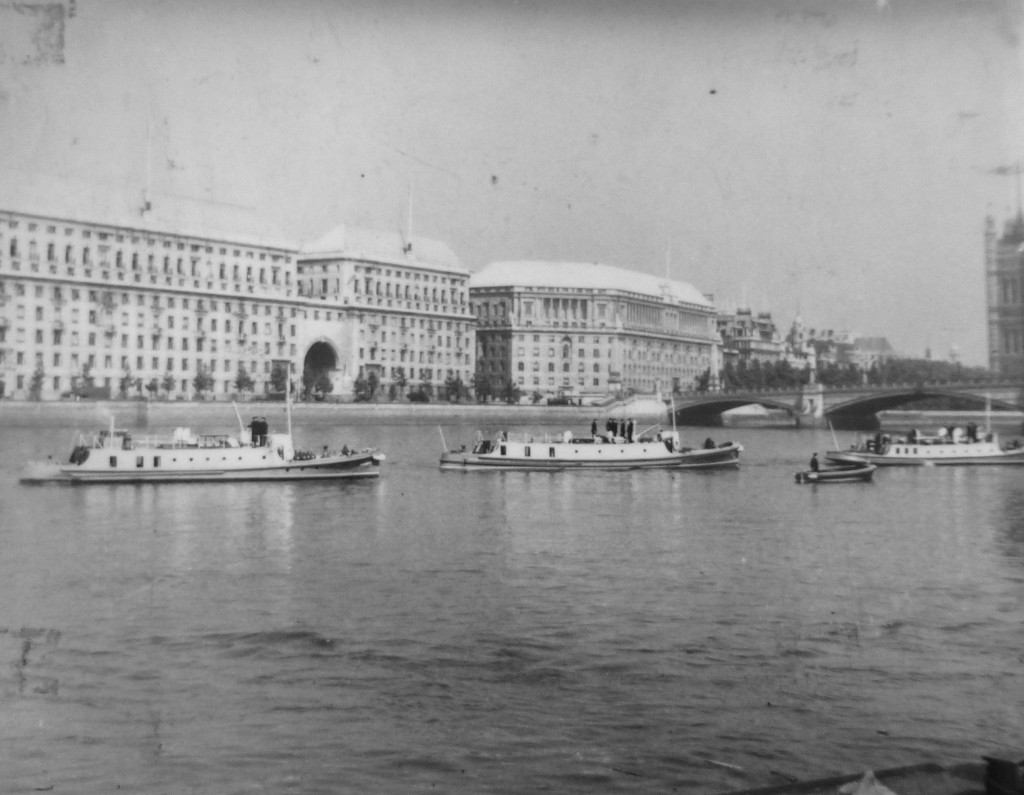 Fireboats were an essential tool in the ability of the Fire Services to fight fires on and along the river. In 1935 the banks of the Thames was still occupied by large numbers of warehouses storing vast amounts of combustible materials and often access from the river was the only means of fighting fires in these warehouses, and the river also provided a readily available source of water.

Large numbers of ships carrying all types of cargo also presented a fire risk both along the Thames and when moored up in the Docks and along the river edge.

The Massey Shaw was equipped with two, 8-cylinder diesel engines which would either drive the boat, or could be switched over to power two Merryweather centrifugal pumps each capable of pumping 1,500 gallons of water per minute through to the deck fire fighting equipment.

It was the ability to pump water from the Thames through hoses to land which was of such importance on the night of the 29th December 1940. Not only was there limited water available from water mains, but it was also a low tide so access to water from the banks of the river was difficult. Having a Fireboat which could moor in water and pump to shore was essential in fighting fires on the night and protecting St. Paul’s Cathedral.

The Massey Shaw was one of several boats that pumped water from the Thames to the streets of the City on the night of the 29th / 30th December 1940.

The following photo shows how hoses would be rowed ashore to connect to hoses run along the streets providing additional supplies, or to replace water from the water mains. It is interesting to see in this picture that land based firemen would have the traditional helmet and the firemen on the fireboats would have flat hats which would have provided very little protection. 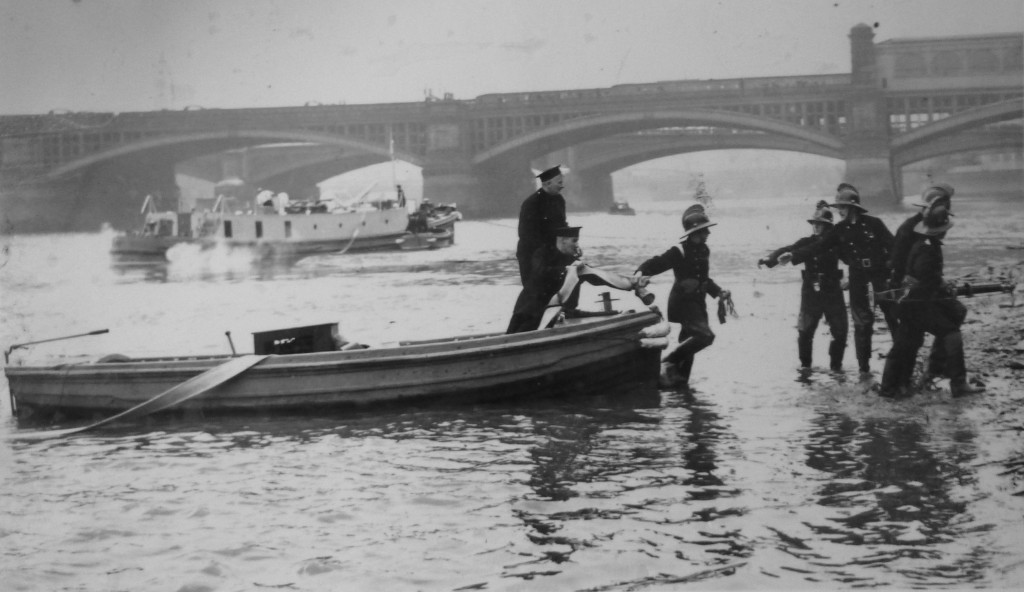 The Massey Shaw could also moor along side and deliver water as shown in the following photo taken at Westminster Pier. 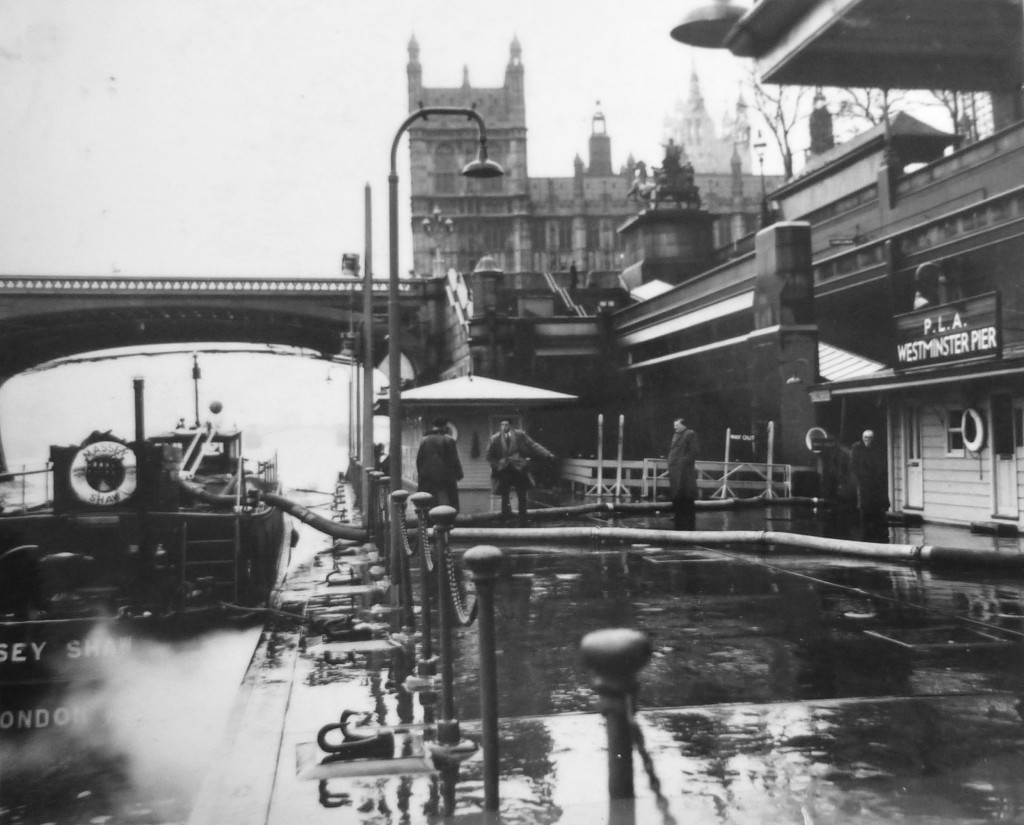 War service for the Massey Shaw started before the bombing of London as the Massey Shaw was one of the little ships that played such a key role in the evacuation of Dunkirk.

The Massey Shaw made three round trips from Ramsgate to Dunkirk bringing back 110 troops in addition to those that she had ferried out to the larger shipping.

The book “Fire Service Memories” by Sir Aylmer Firebrace includes an account of the Dunkirk operation:

“Here, in its chronological position is a brief account of ‘excursion to hell’ (to use Mr J.B. Priestley’s graphic phrase) of the fire boat Massey Shaw, in which she played a gallant part in rescuing, from under the noses of dive-bombing Stukas, some of the 300,000 men of the British Expeditionary Force who were patiently and perilously waiting on the Dunkirk beaches.

The Massey Shaw, with a volunteer amateur pilot on board, arrived at Ramsgate on 31st May 1940. She made three trips to Dunkirk, bringing ninety-six men back on board and transferring five hundred others to larger vessels. It is believed that she was the last of the small boats to leave Dunkirk harbour. Whilst troops, British and French, were being taken off the beaches, heavy bombing was proceeding, air battles were being fought overhead, and the whole coast for many miles presented a panorama of raging fire and sullen smoke.

The embarkation bristled with difficulties; always there was the imminent danger of the fire boat going aground, and so becoming a total loss. The Dunkirk task completed, the Massey Shaw was on her way back to London, when, only two hundred yards away from her, the Emile de Champs, a French auxiliary vessel, struck a mine and sank within two minutes. Forty survivors, many of them in need of immediate attention, were picked up and transferred to H.M.S. Albury, a mine sweeper

The Massey Shaw returns from Dunkirk on the 4th June, 1940. 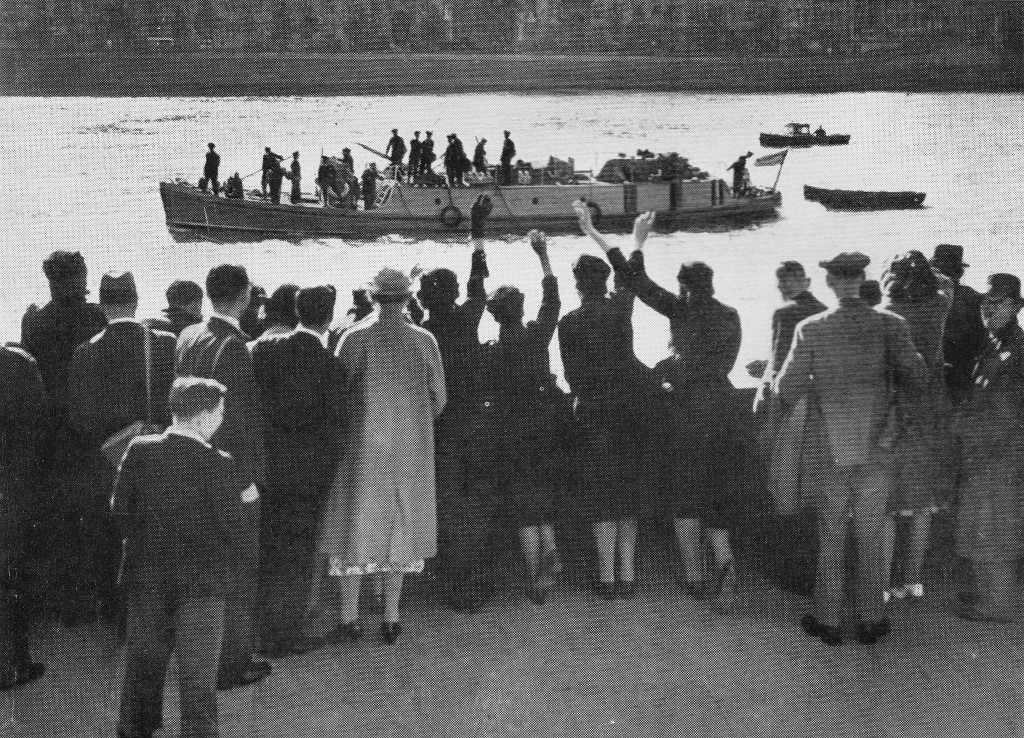 The Massey Shaw taking a fast ruin along the Thames. Greenwich Power Station is to the left. 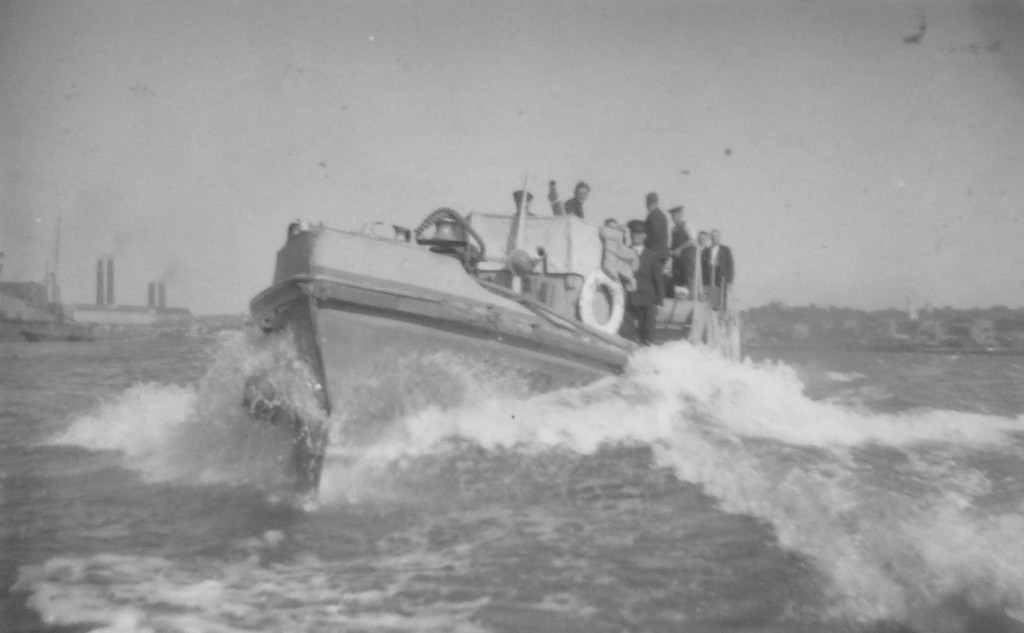 Another photo of the Massey Shaw. The layout of the boat is much the same today, the only significant difference being the open steering position was replaced after the war by an enclosed wheel house. 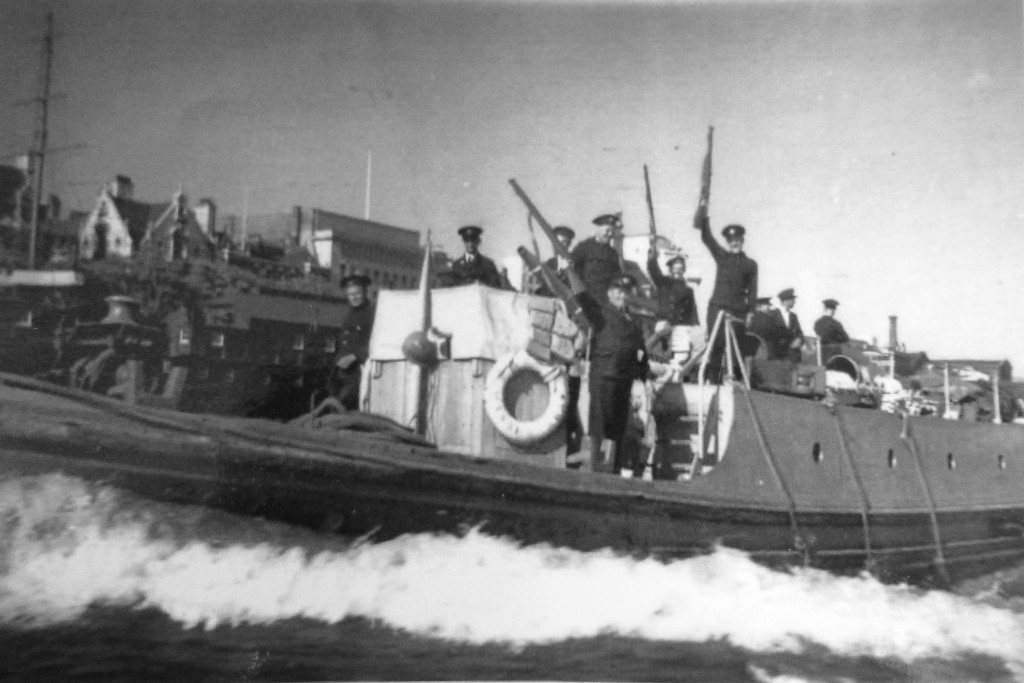 The Massey Shaw fighting a warehouse fire using the main Monitor to fire a high pressure water jet. This photo illustrates how a river based craft can be far more effective at fighting fires along the river edge. Fully self contained and floating on an unlimited supply of water, the fire boat was a highly effective machine for fighting this type of fire. 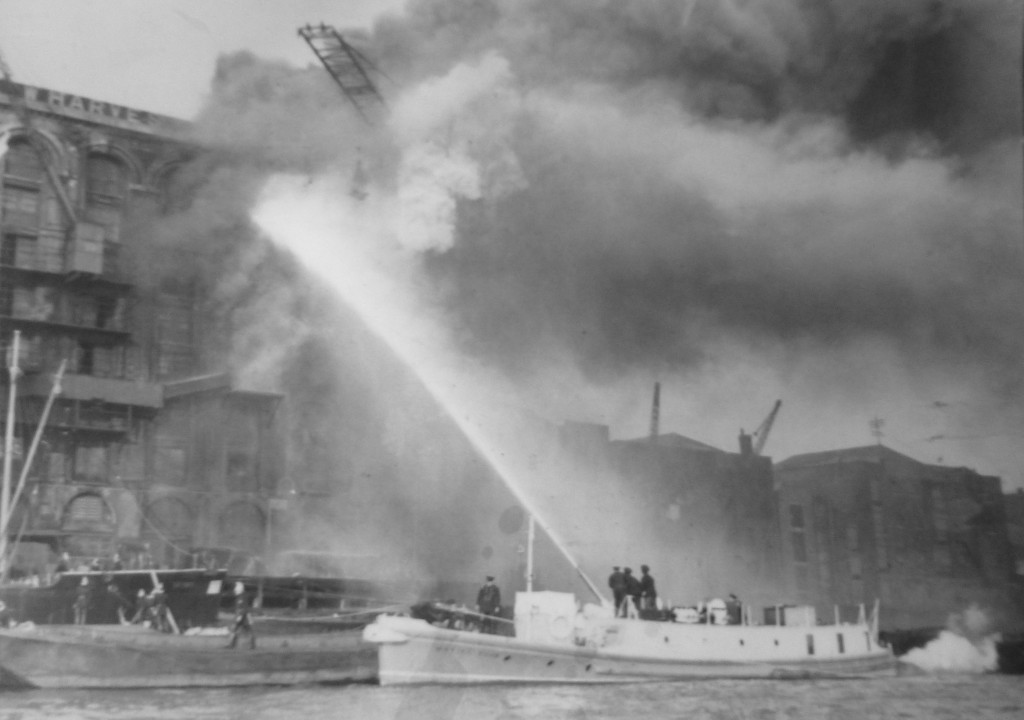 The Massey Shaw continued in operational service until being decommissioned in 1971. Left to gradually deteriorate in St. Katherine Docks, the Massey Shaw & Marine Vessels Preservation Trust was formed to rescue and preserve the boat.

A grant from the Heritage Lottery Fund enabled a full restoration to be carried out in 2012/13 and the Massey Shaw is now back to a fully operational status, with the majority of the boat still being of the original materials and construction. 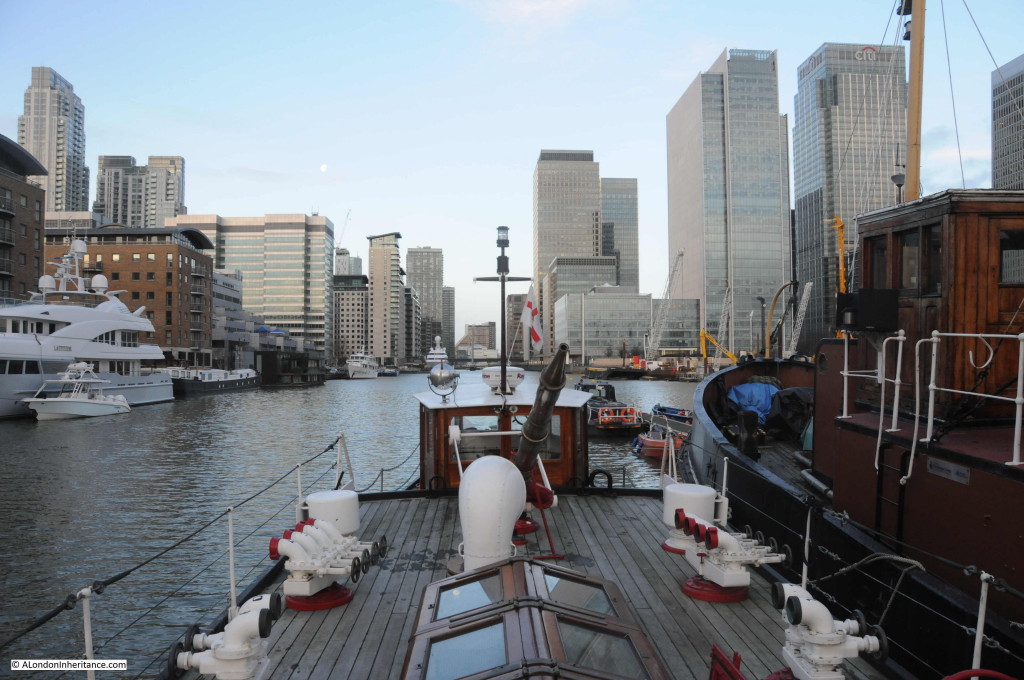 The permanent main Monitor is in the centre, just in front of the wheel house.

On both sides of the deck are four banks of deck connections with the outlets painted red. These are to provide water supplies for additional Monitors on the boat, or to connect hoses to provide a water supply to the shore.

The deck connections with the outlets painted black are for salvage work as the Massey Shaw also has the ability to suck water out of a stricken vessel.

The windows in the foreground provide light into the engine room directly below and can be opened to provide ventilation.

The following photo shows all the deck outlets in use to provide an additional 8 Monitors along the side of the boat. 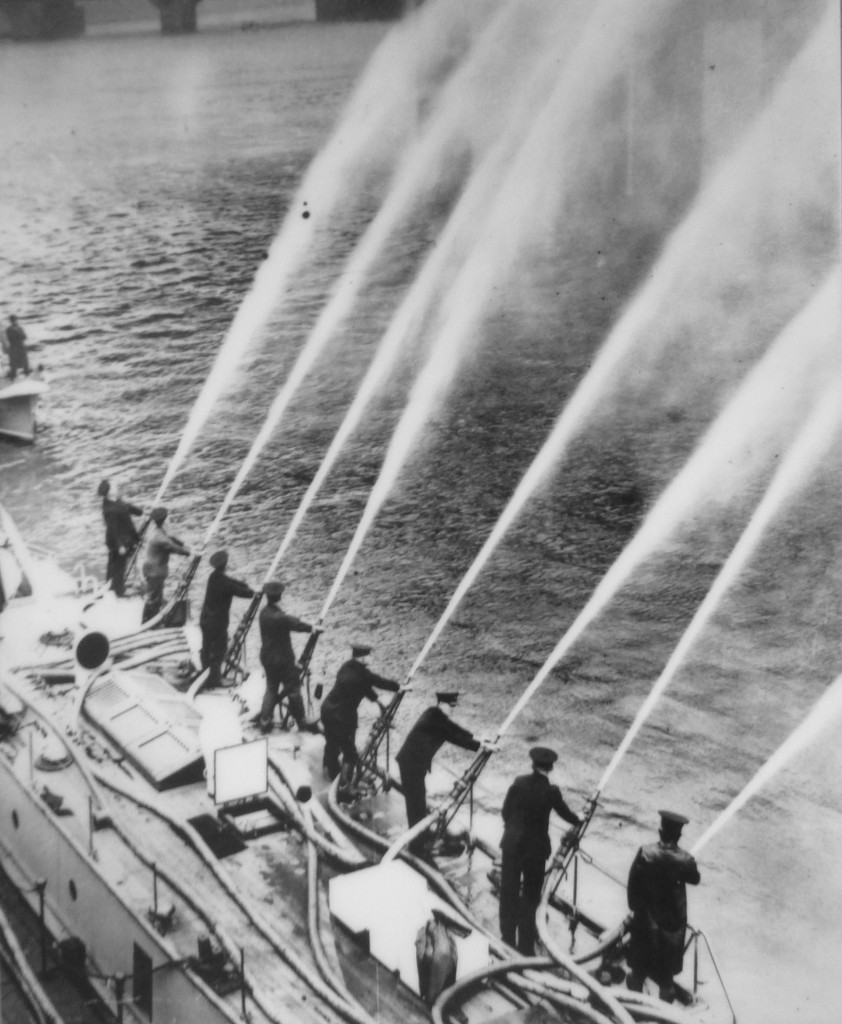 The Massey Shaw continues to be powered by the two original diesel engines. Under normal operation, these both drive the boat at a full speed of up to 12 knots.

The engine room with the engines in magnificent condition after restoration. 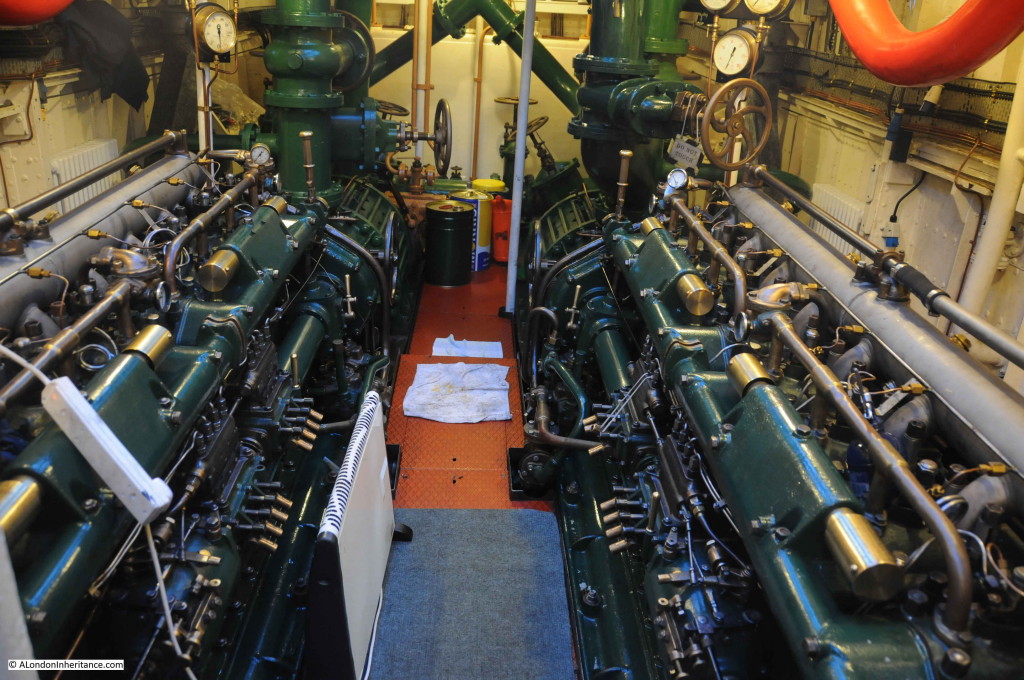 Indicator dials showing the vacuum created by the pumps when suction was needed to pump water from a vessel during salvage, and also the pressure in pounds per inch of the pump when supplying water. 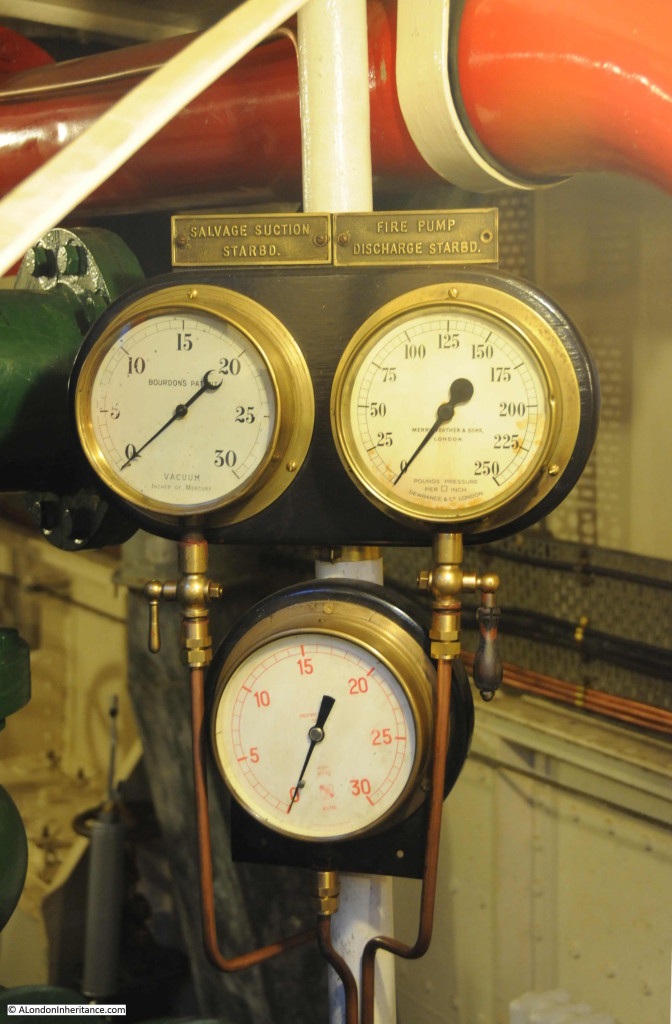 The heavy pipework and controls needed to transport the water under high pressure from the pumps to the deck. 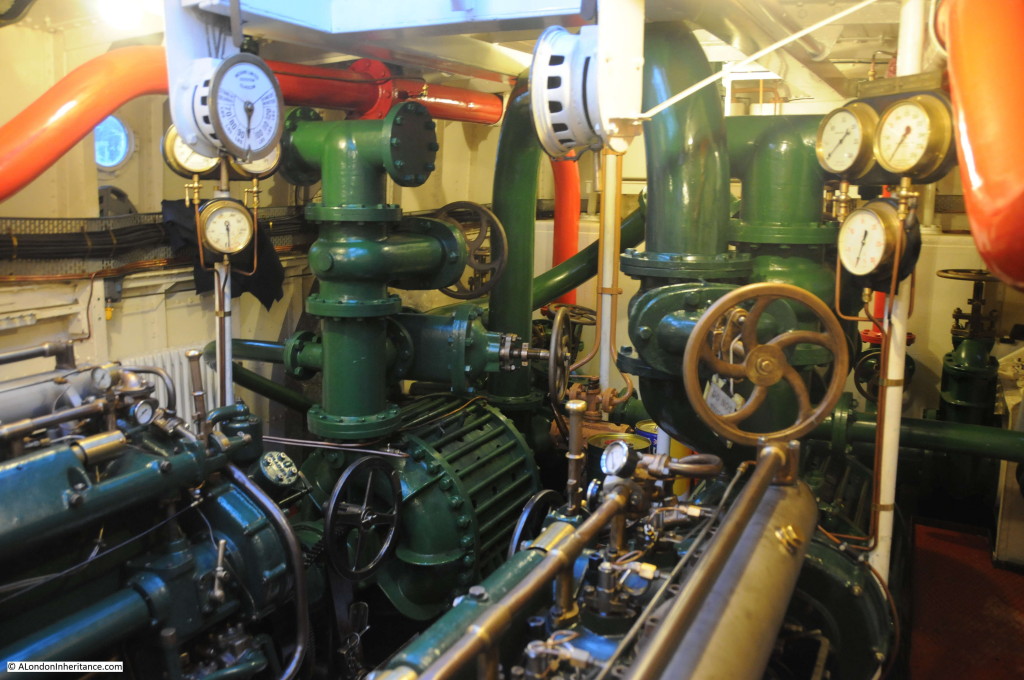 Working in the engine room with all engines and pumps working flat out was very noisy. Ear protectors are an essential aid, although nothing like these would have been in use in the 1940s. 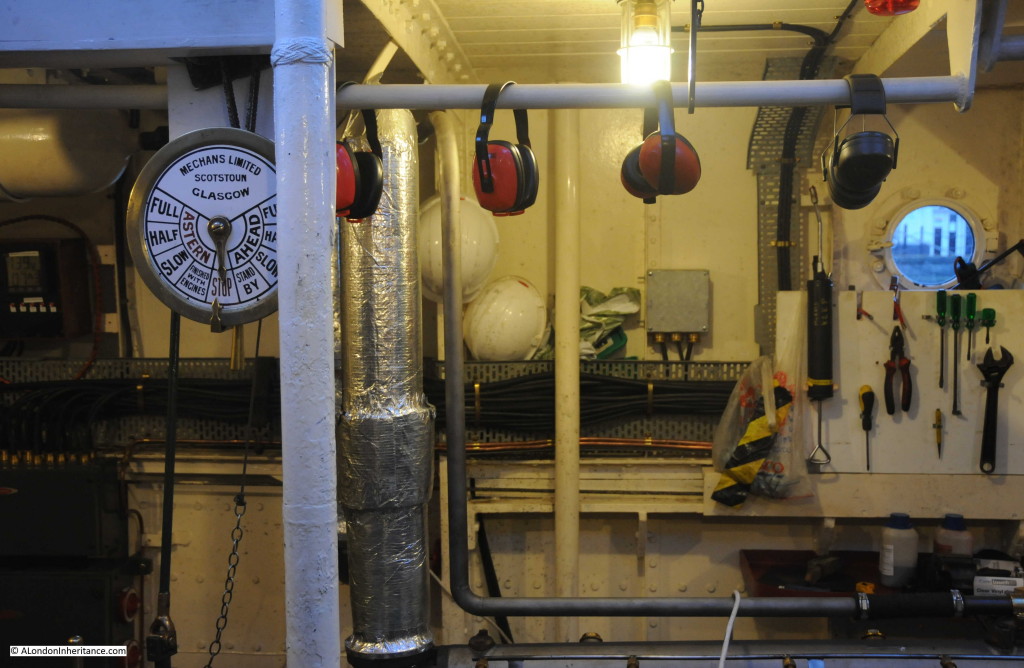 Signalling between the wheel house and the engine room continues to use the original system of bells and dials to indicate to the engineer in the engine room what power and direction is required from the  engines. 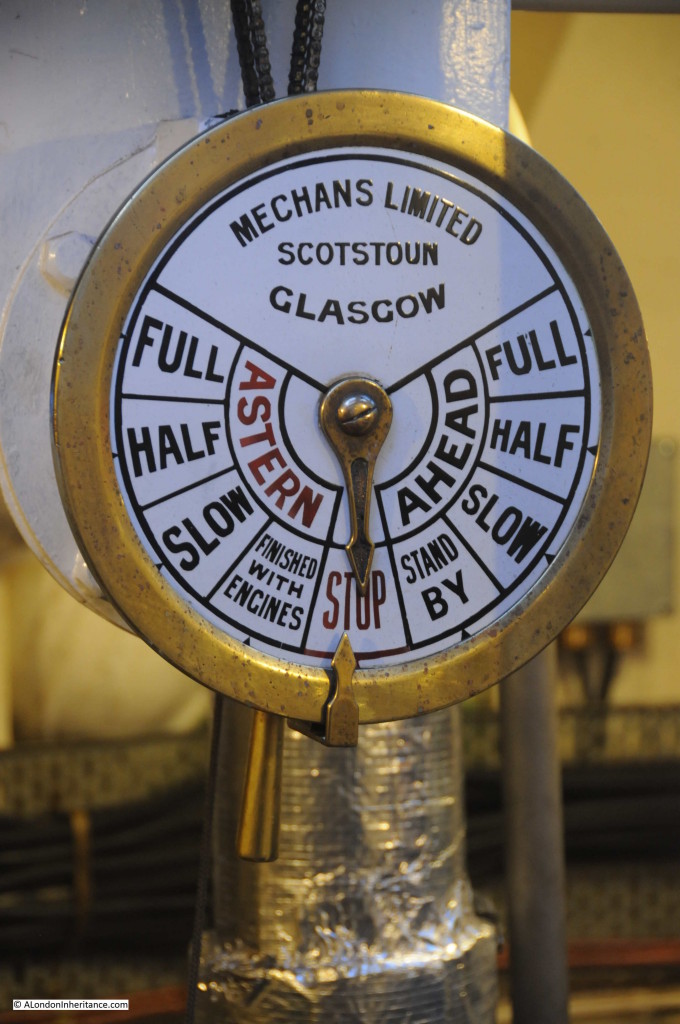 The experience of being on the Massey Shaw along the Thames highlighted the considerable skill required to control the boat.

Whilst the shallow draft is excellent for navigating shallow water, it also reduces the water resistance so any wind has more of an impact. Due to the size of the boat and limited rudder size, there is a delay between turning the wheel and the boat starting to turn, and as the Captain does not have direct control of engine power, there is a further delay between requesting a change in power and the engines responding.

Keeping in position when fighting a large warehouse fire or manoeuvring in the Dunkirk harbour whilst under attack would have required a considerable amount of skill and experience.

The original indicator panel in the engine room showing the status of the navigation lights made by Siemens Brothers of London. 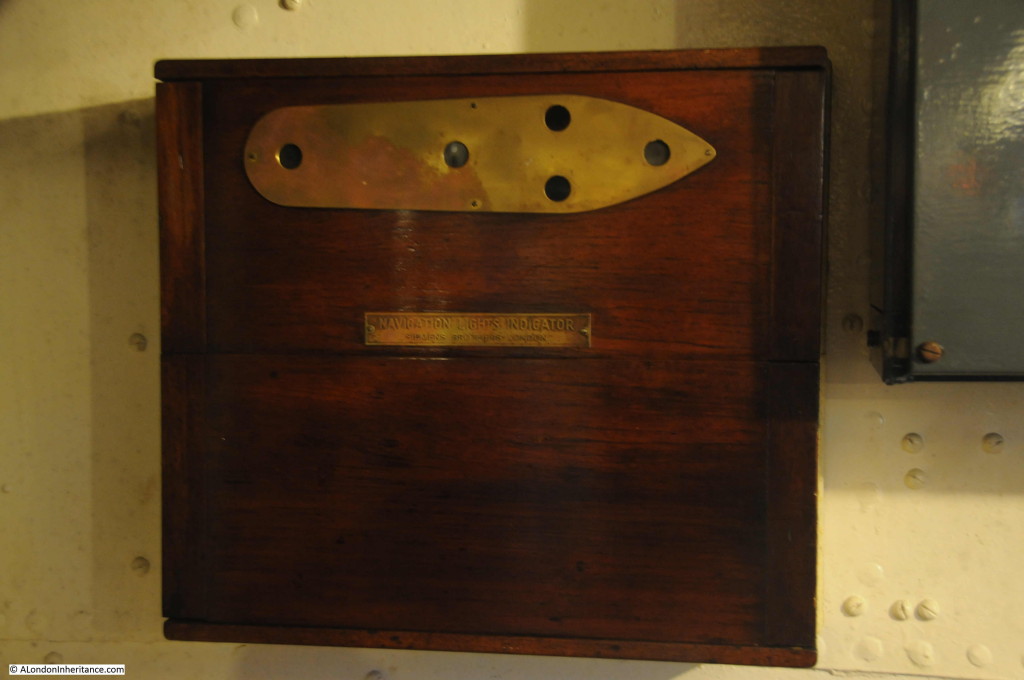 The crew cabin of the Massey Shaw has a number of commemorative plaques as shown in the photo below.

The large plaque at the top was made just after Dunkirk, and the plaque below this details the names of the crew of the Massey Shaw at the time of Dunkirk.

Surrounding these are plaques presented to the Massey Shaw for the various commemoration visits to Dunkirk. The round plaque to the left commemorates the 2015 visit to Dunkirk on the 75th anniversary. 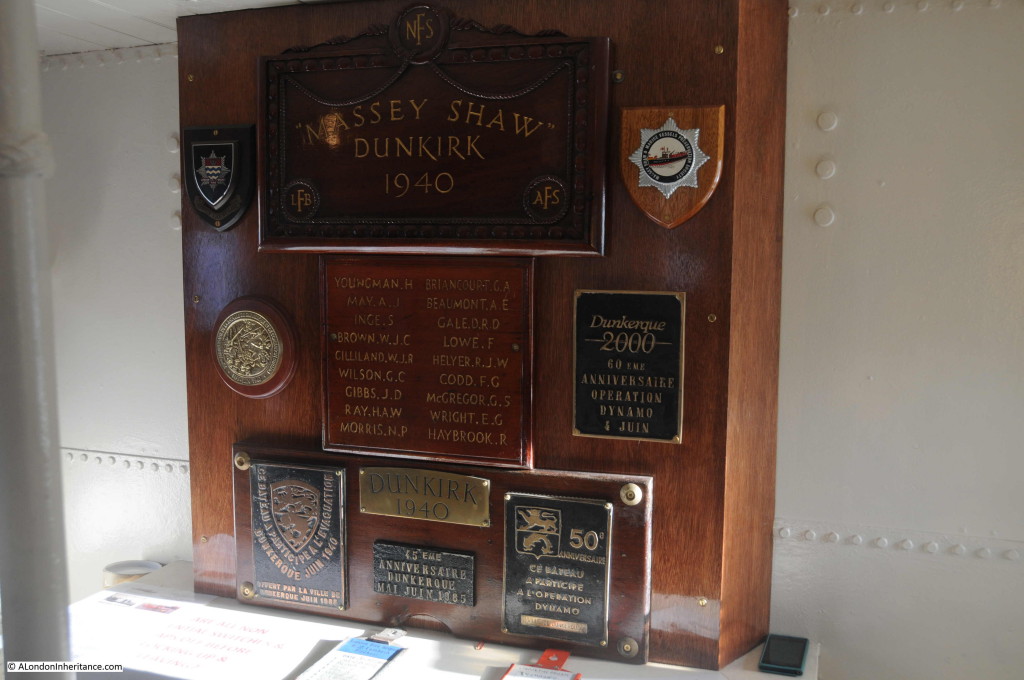 As the last remaining fireboat from the 2nd World War, the Massey Shaw is a very graphic reminder of the engineering used at the time and the bravery of the crews who manned these boats that were so critical to the protection of London.

To have the Massey Shaw in a museum would be good, but to have the boat as a fully working craft able to demonstrate how fire boats operated at the time is remarkable.

My thanks to the Massey Shaw Education Trust for much of the information and photos used in this article (although any errors in recording this information are my responsibility). Other sources of information include the book Fire Service Memories by Sir Aylmer Firebrace published in 1949, which is highly recommended for an in depth account of the fire services up to and including the 2nd World War.

Join me in tomorrow’s post for a trip down the Thames on the Massey Shaw and a demonstration of fire fighting capabilities from both 1940 and 2015.

2 thoughts on “The Massey Shaw Fireboat – A Brief History”