Euston Underground Station – The Lost Tunnels is the name of the latest Hidden London tour by the London Transport Museum, and on a warm Thursday afternoon last week I took the tour and descended beneath Euston station to find a time capsule from the 1960s.

The tour started at the original Euston station of the Charing Cross, Euston and Hampstead Railway. The station is one of Leslie Green’s distinctive station designs and is the red building on the corner of Melton Street and Drummond Street, on the western side of Euston mainline station. 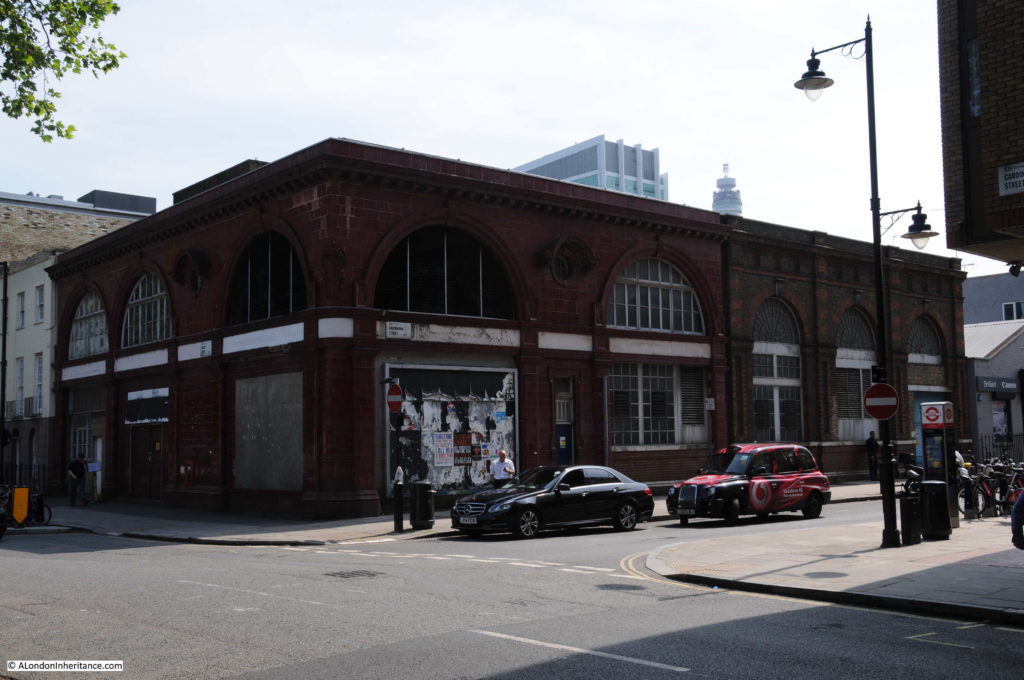 The Charing Cross, Euston and Hampstead Railway (better known as the Hampstead Tube), was one of two original underground lines serving Euston mainline station, opened in 1907, this line served from Charing Cross to the north of London (Golders Green and Highgate) through Euston Station.

Although the two lines were separate and had stations on either side of Euston mainline station, they did agree to building an interconnecting passageway with a ticket hall and lifts to the mainline station platform.

The two separate station buildings were closed on the 30th September 1914 after the two railways were taken under the ownership of the Underground Electric Railways of London with the interconnecting passageway providing access to Euston Station. After work to enlarge some of the tunnels, the lines were combined to become the Northern line, with the two lines running south converging at Euston Underground Station.

Inside the remaining Hampstead Tube station building in Melton Street, mainly now used for air conditioning of the tube system. 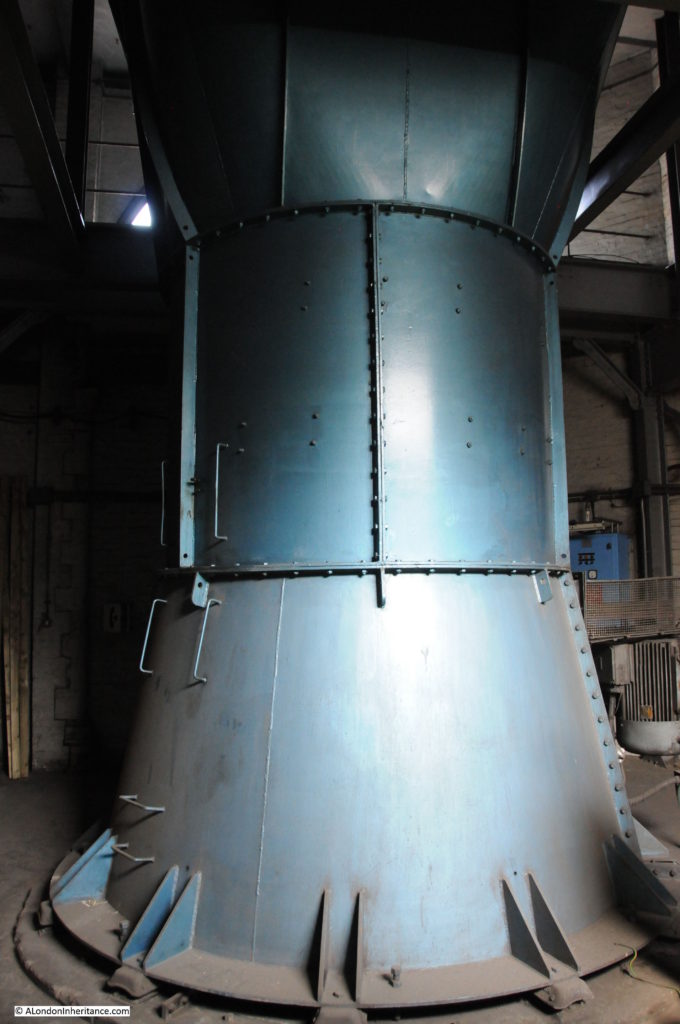 Euston mainline station was rebuilt in the 1960s and along with the new Victoria line running through Euston, the opportunity was taken to rationalise the various underground passageways and ticket halls for the underground lines terminating at Euston.

The old connecting passageways and ticket hall closed on the 29th April 1962 and it is these passageways that were the subject of the tour.

After a look at the station building in Melton Street, it was then a walk through Euston Station, through the underground ticket hall and down to one of the Northern Line platforms, where at the very end of the platform was a door that led through to the closed passageways.

Through the door at the end of the platform and a series of steps lead upwards. The tiling on the side walls highlights that these were once passenger tunnels rather than service tunnels. 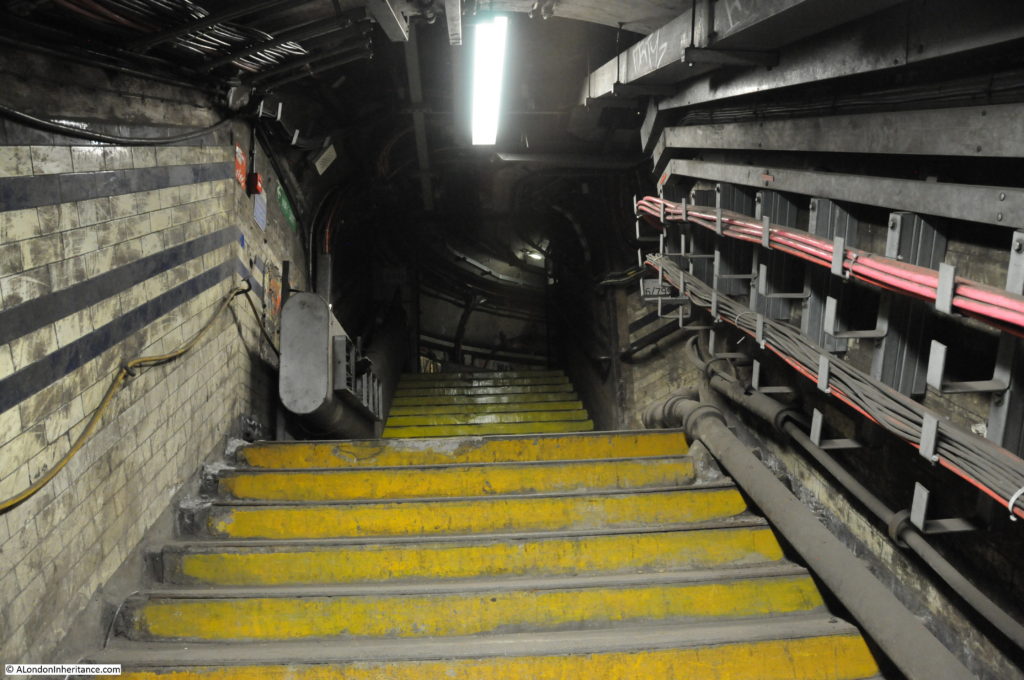 At the top of the steps and a long disused tunnel stretches ahead. No longer used by passengers moving between the different underground lines and the station above, now just used for carrying the infrastructure needed to run the transport system. 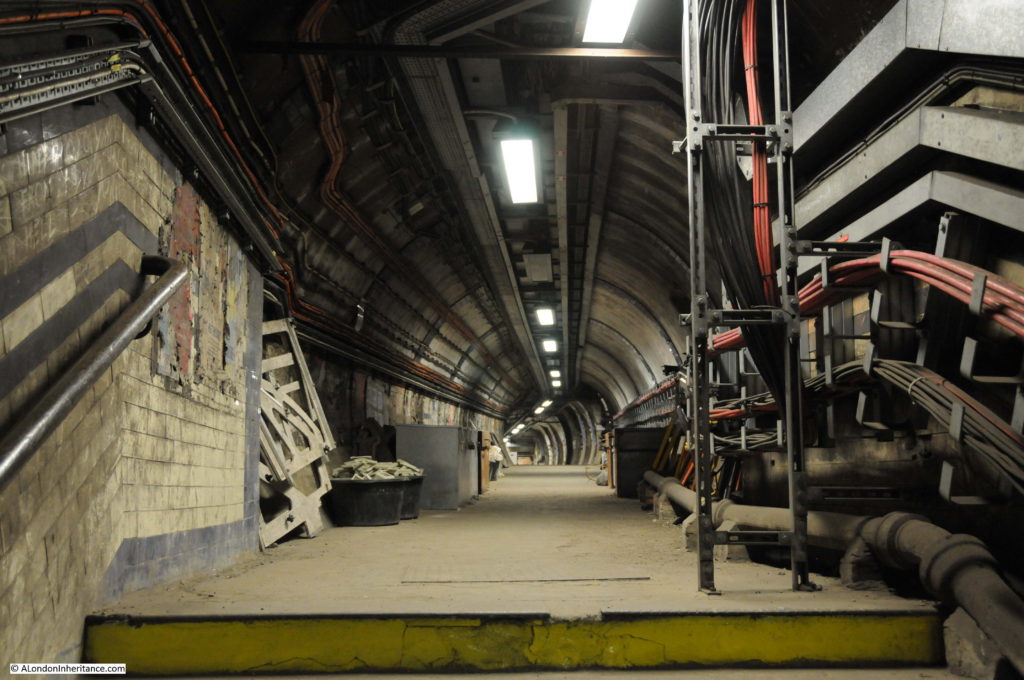 I mentioned at the start of this post, that the tunnels are a time capsule from the 1960s. Apart from the installation of cables, they have not been used since and the advertising posters that lined the walls of the tunnels are still in place. Whilst many have lost sections over the years, the lack of sunlight means that the colours are as vibrant as when they were first pasted on the walls. 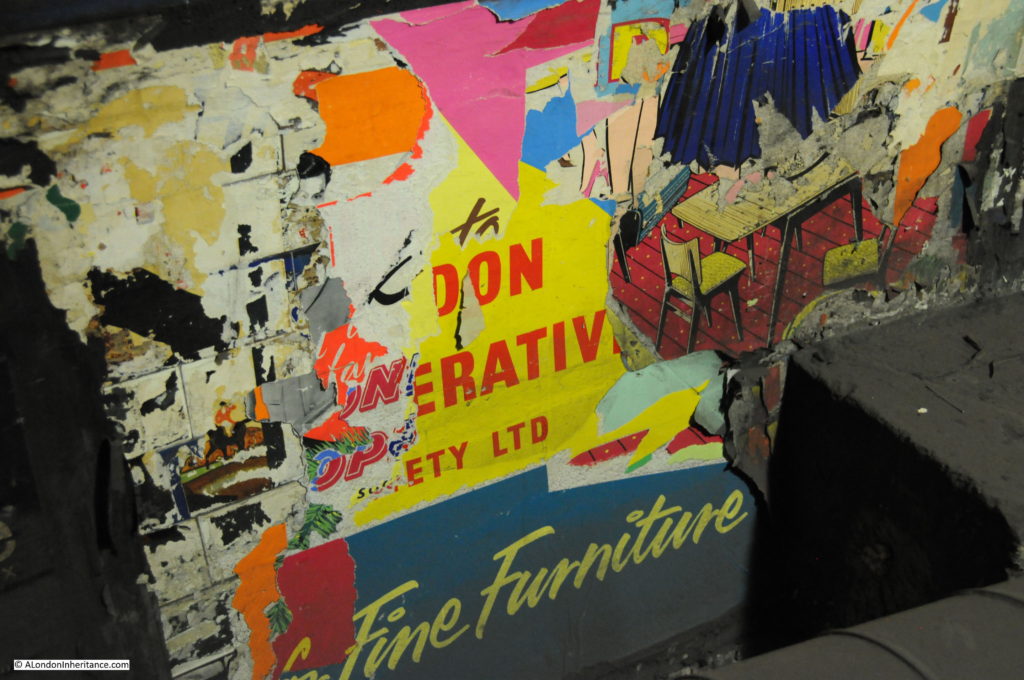 Posters on the walls include the posters informing passengers of the impending closure of the tunnels on the 29th April 1962: 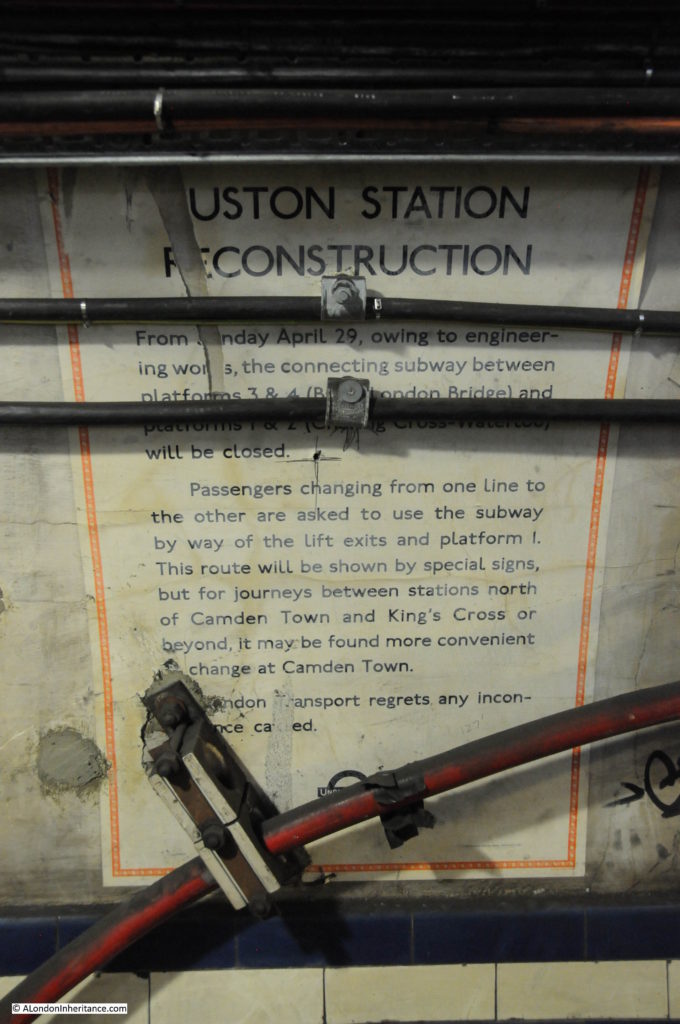 Posters include the original telephone number format when the London area was still part of the dial code: 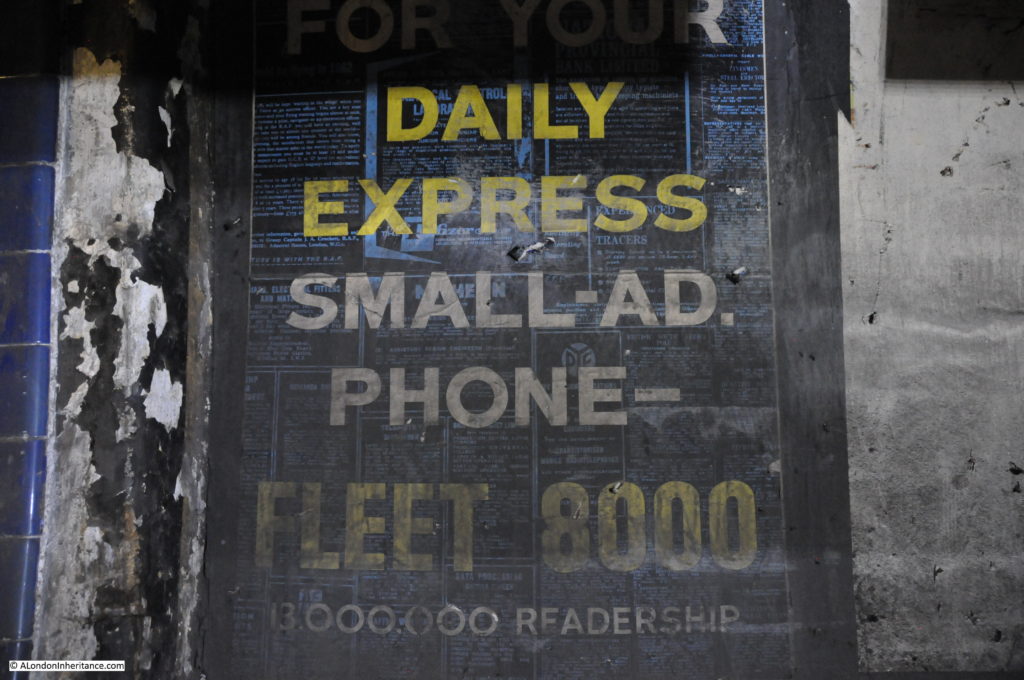 Along the passageway is the original ticket office. This provided passengers passing between the different rail networks with the option of buying tickets as they passed along the interconnecting tunnels. 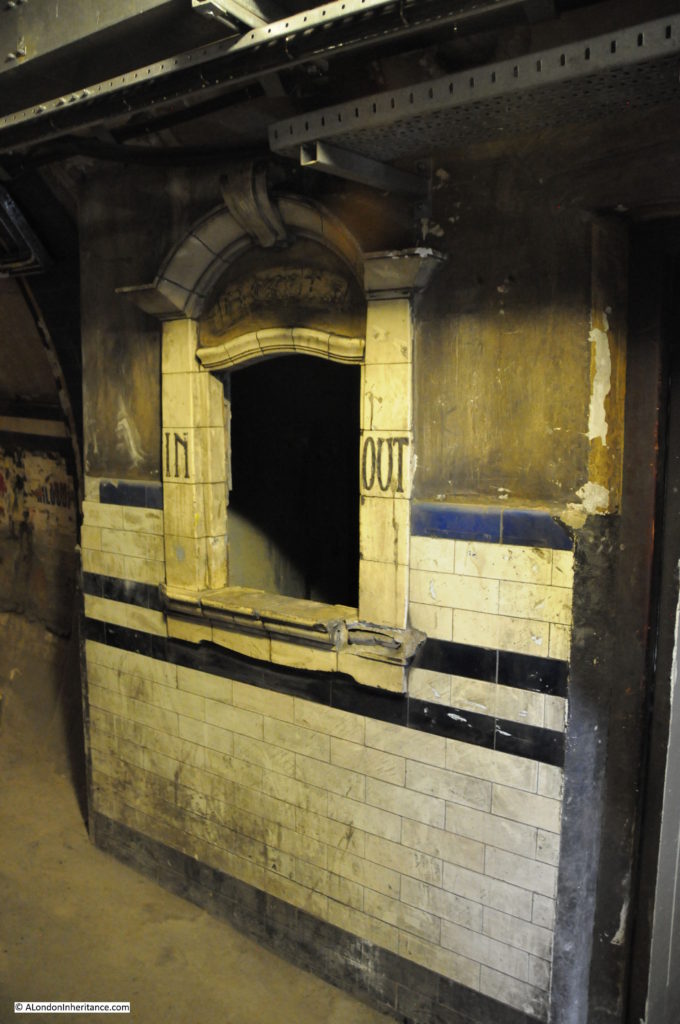 Poster advertising the film West Side Story at the Astoria from the 27th February 1962: 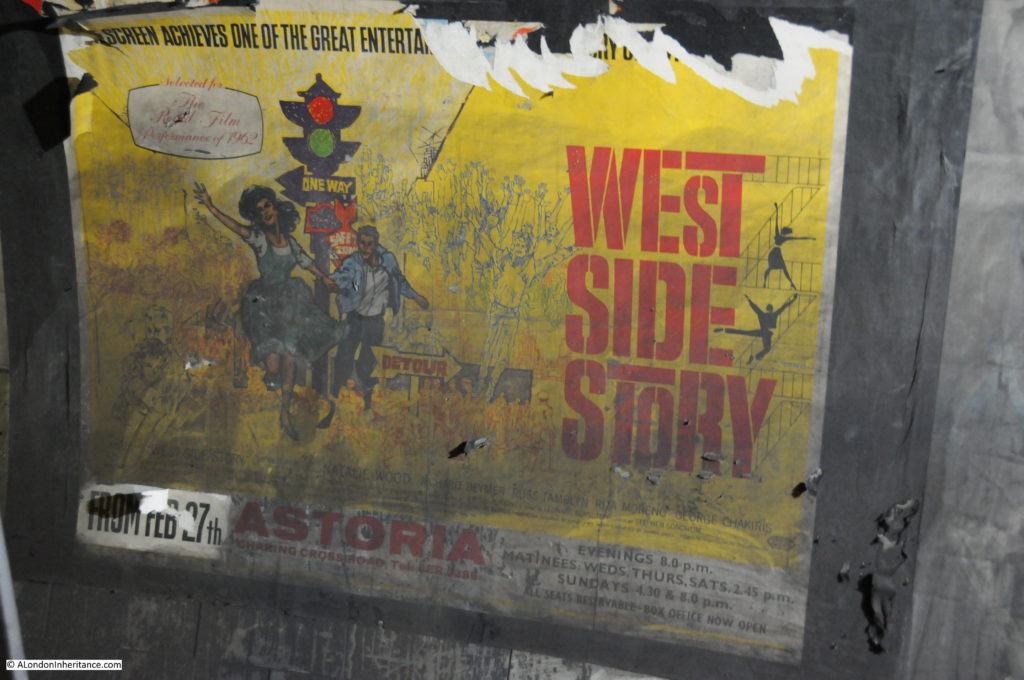 Steps to a dead end. It would be interesting to know what is on the other side: 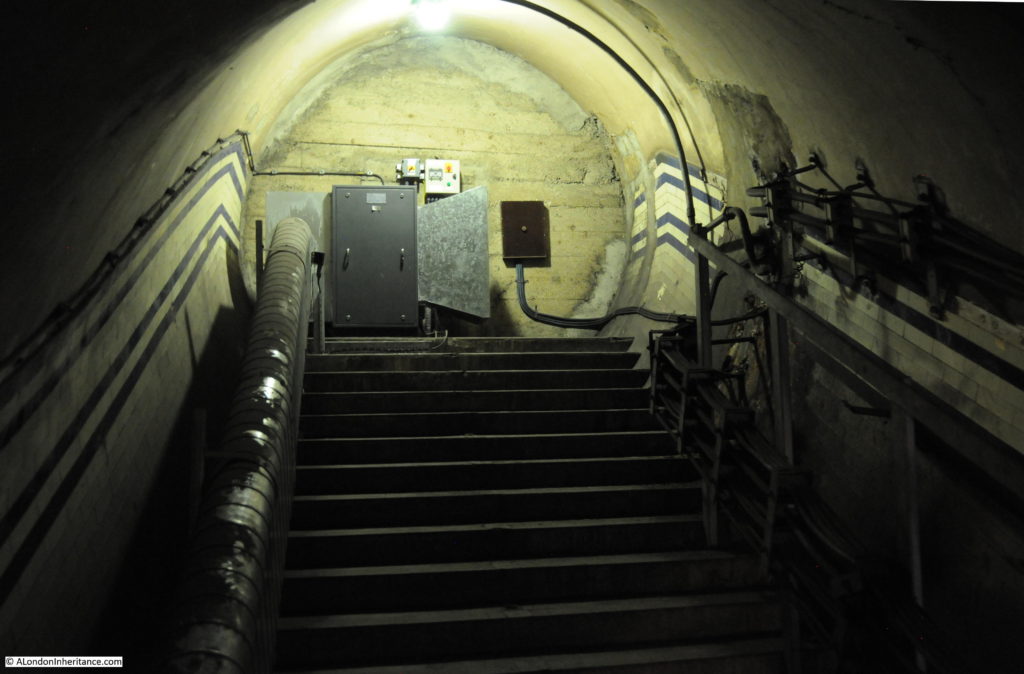 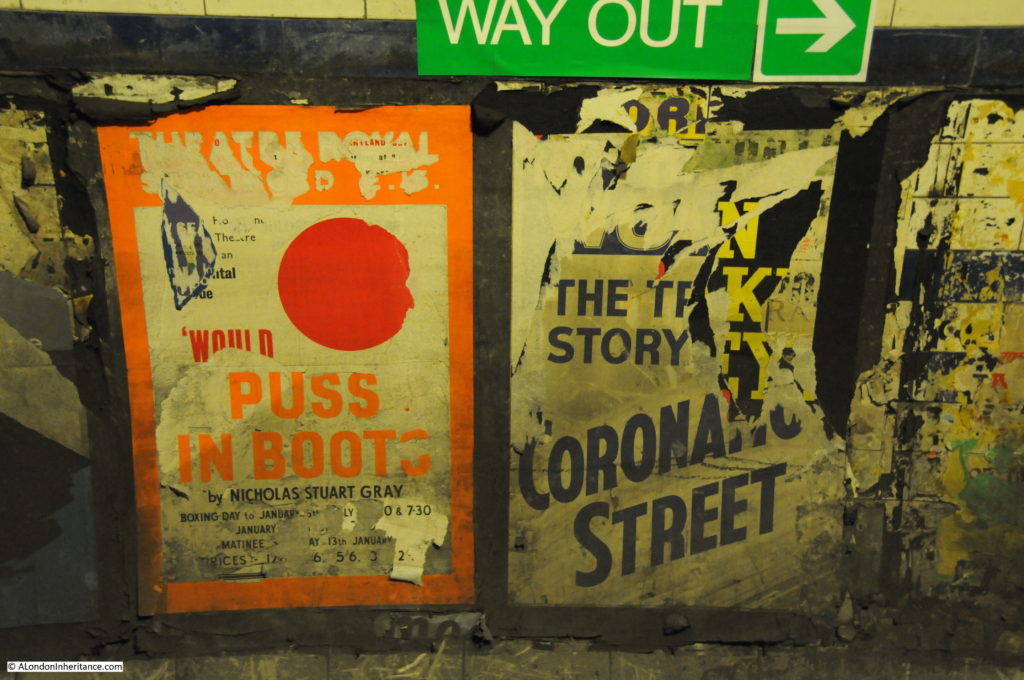 And more posters. The poster in the centre invites you to Meet the Stars and includes names such as Brian Rix, Stratford Johns, Francesca Annis, Maurice Denham and Julie Andrew. 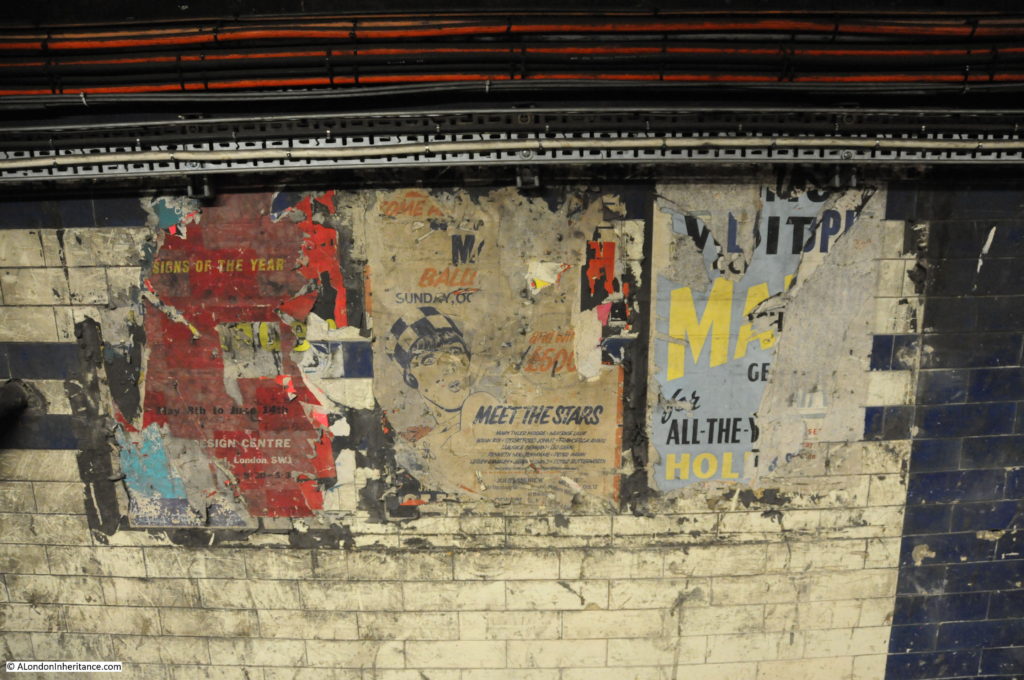 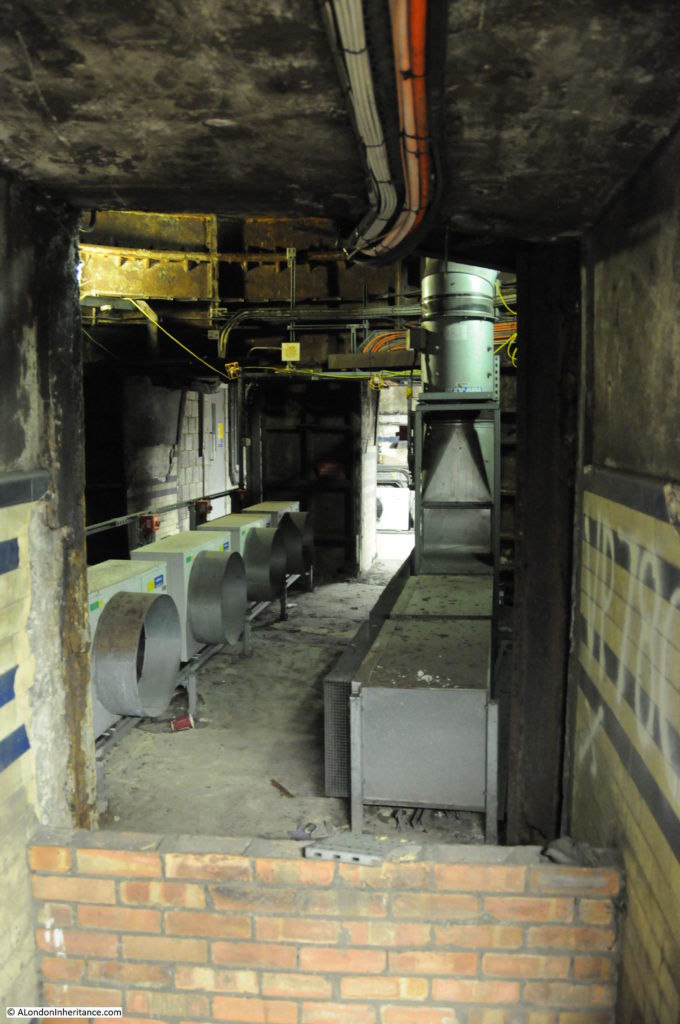 And a bricked up entrance: 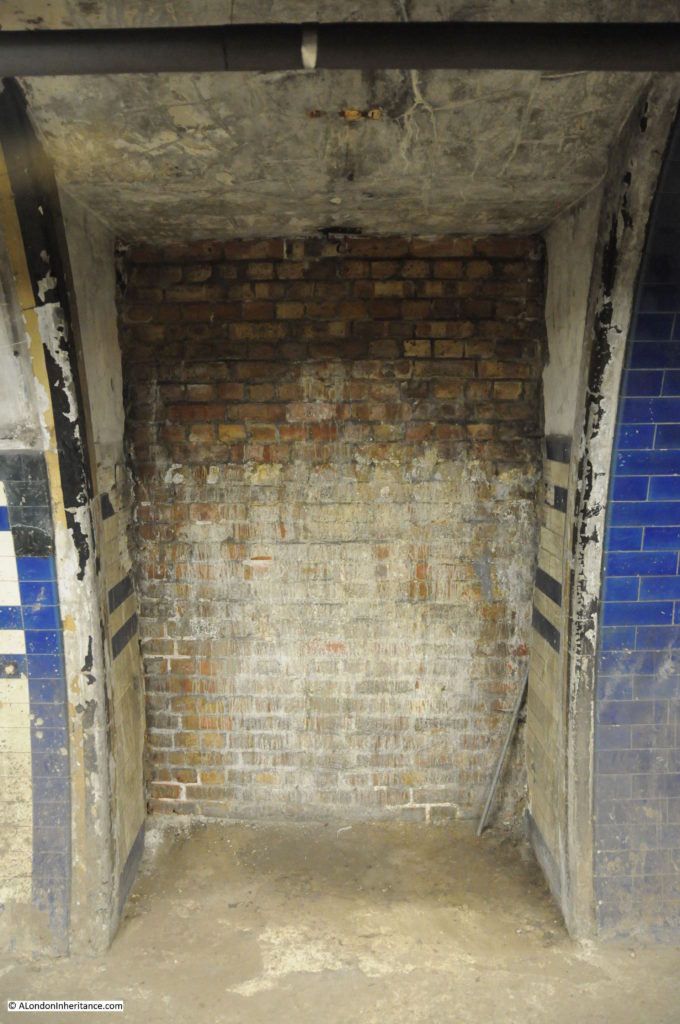 Poster advertising Bargain Travel on British Rail. Not sure that with the way ticket prices have changed since the early 1960s you would now get as much “More miles for your money”: 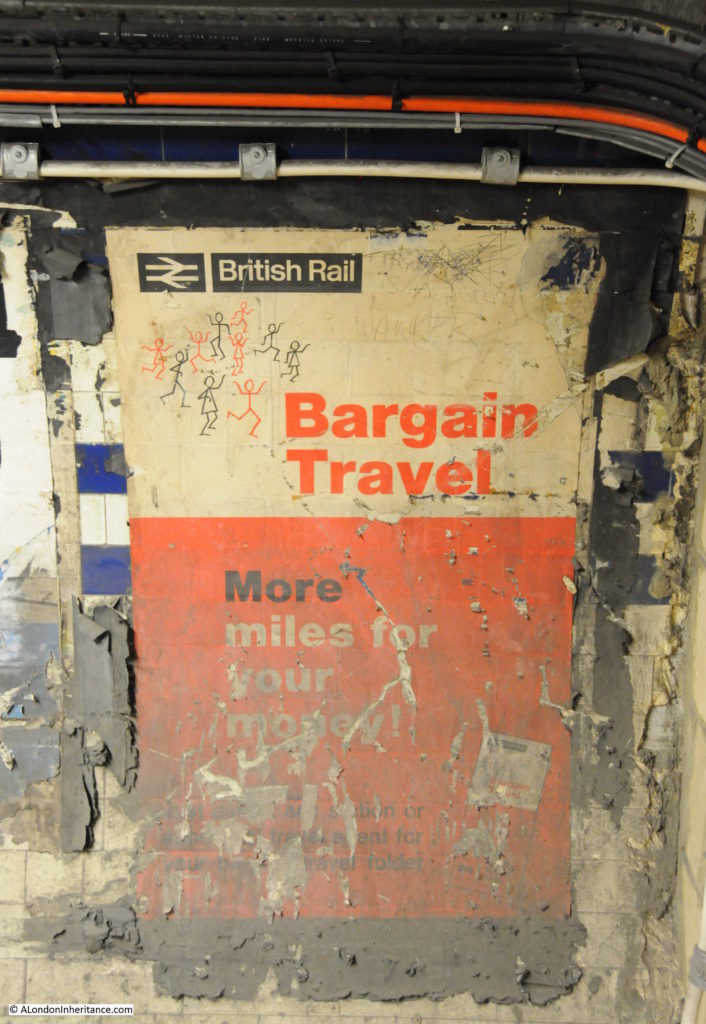 The Midland Pullman – a luxury 1st class only train aimed at business travelers between London and Manchester: 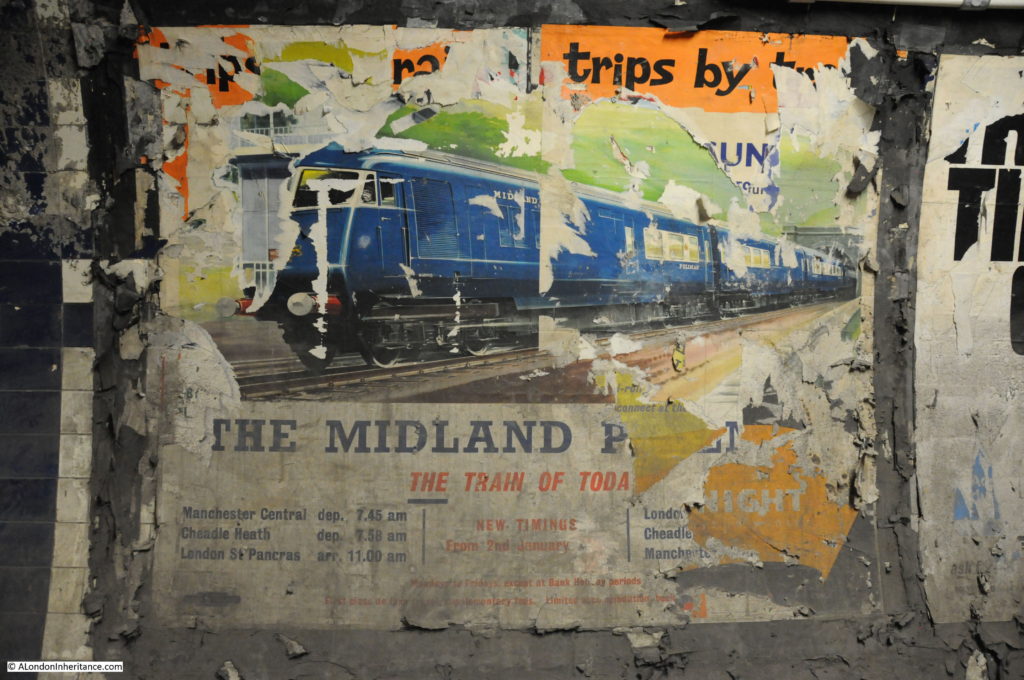 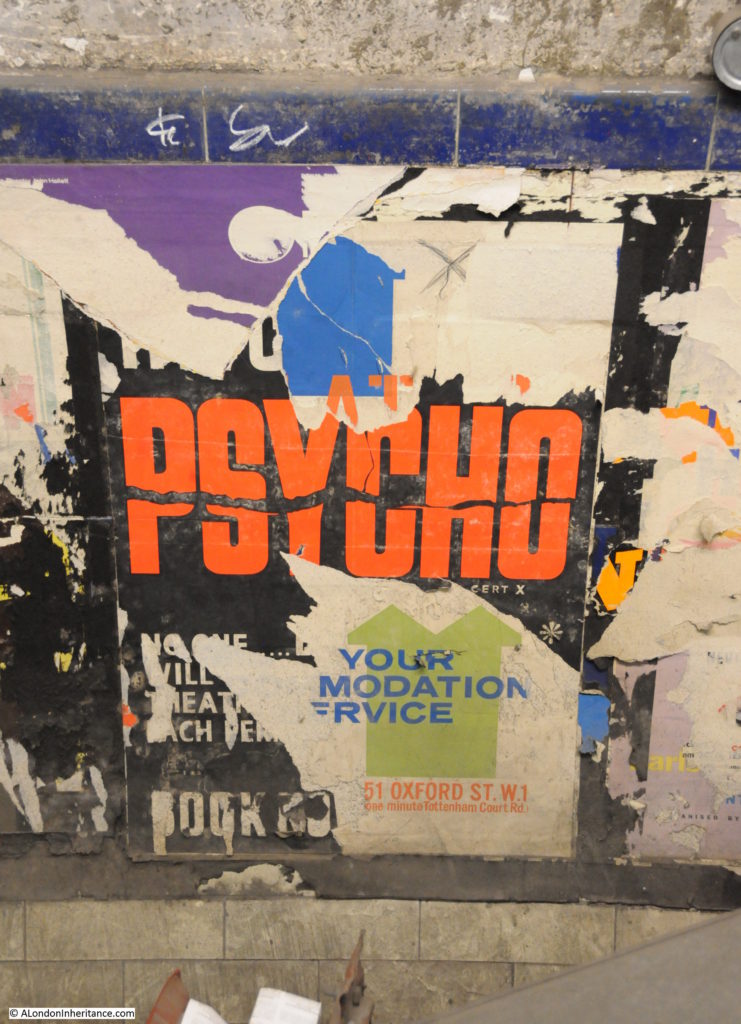 View along the tunnel: 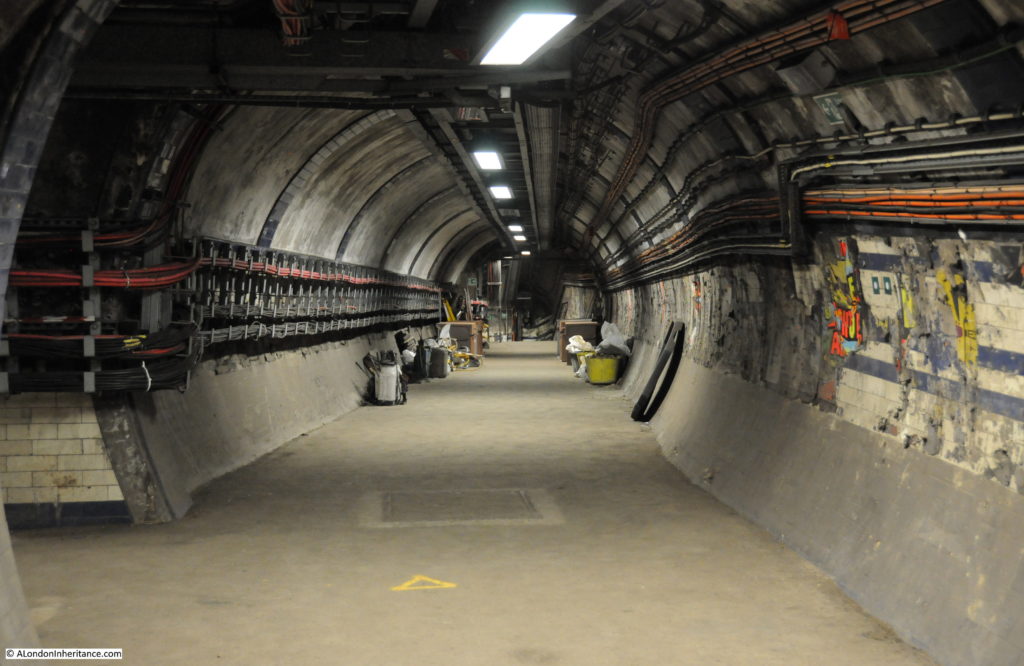 The route up to the mainline station from the original connecting passageways was via lift. Two lifts shafts originally ran to the surface. Looking up one of the lift shafts: 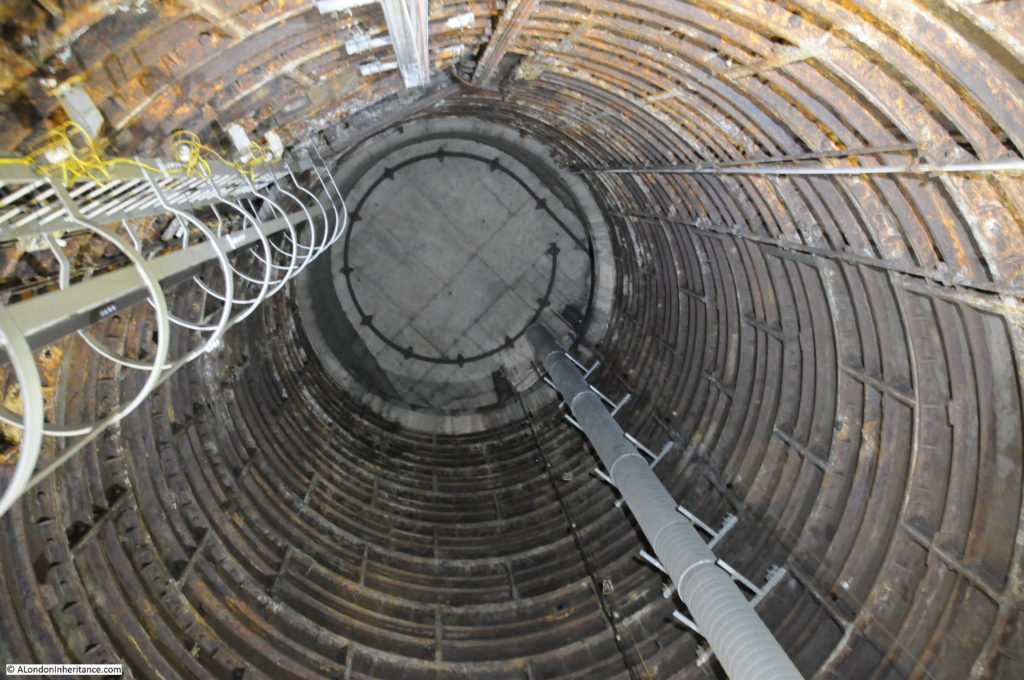 Looking up the tunnel with a limited amount of infill on the floor of the tunnel to provide a walkway: 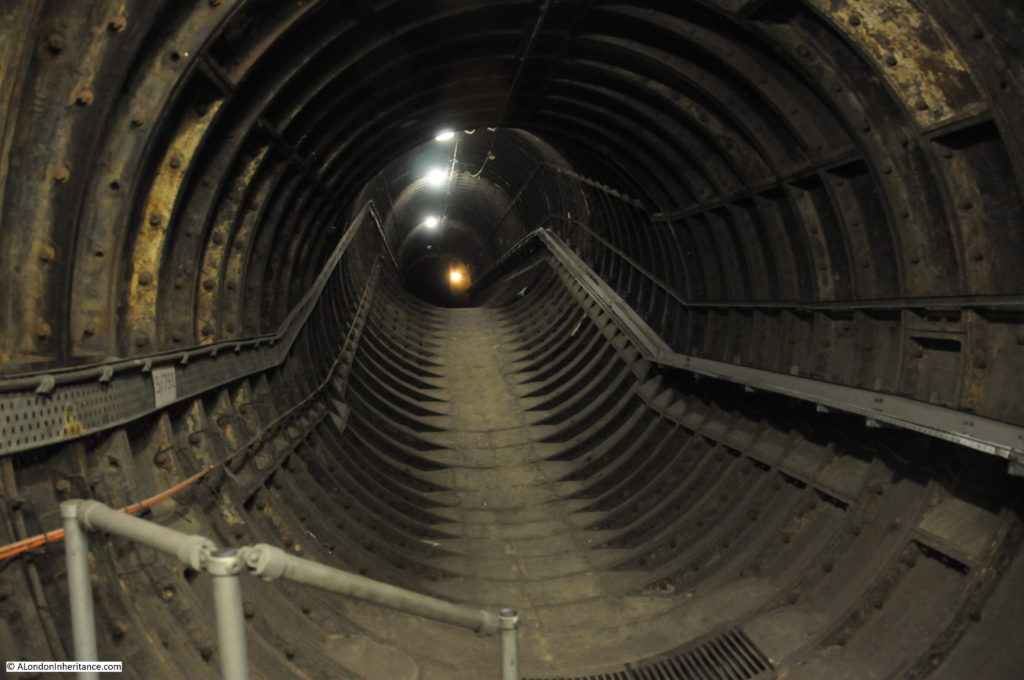 Further up the tunnel: 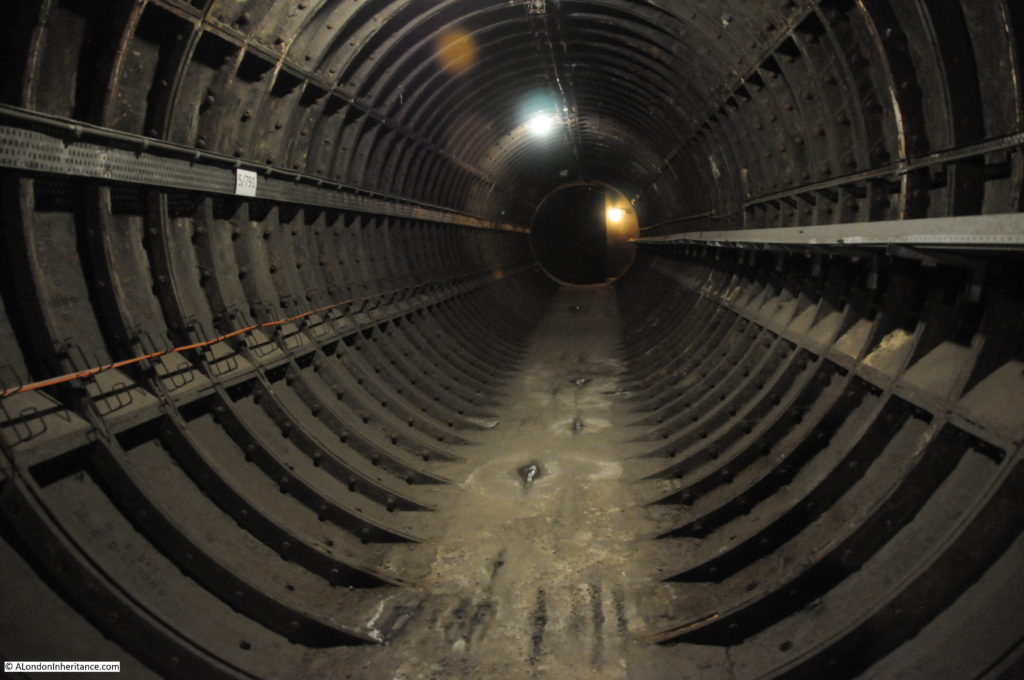 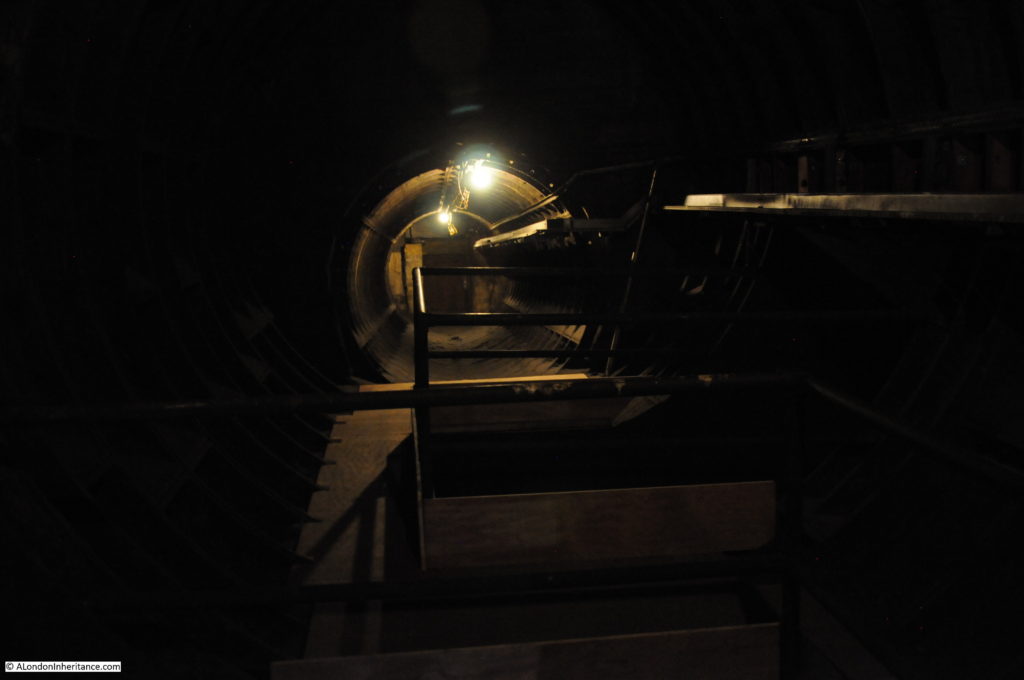 This is where the holes in the roof of the platforms below provide access to the ventilation tunnels above. If you look up from many of the platforms across the underground system you will see large grills set in the roof above the part of the tunnel where the train runs. It is these grills that lead to ventilation tunnels above. Trains entering and leaving the station help with ventilation by causing a large amount of air movement as they pass through.

The roof of a train and passengers just about to board seen from above the ventilation grill: 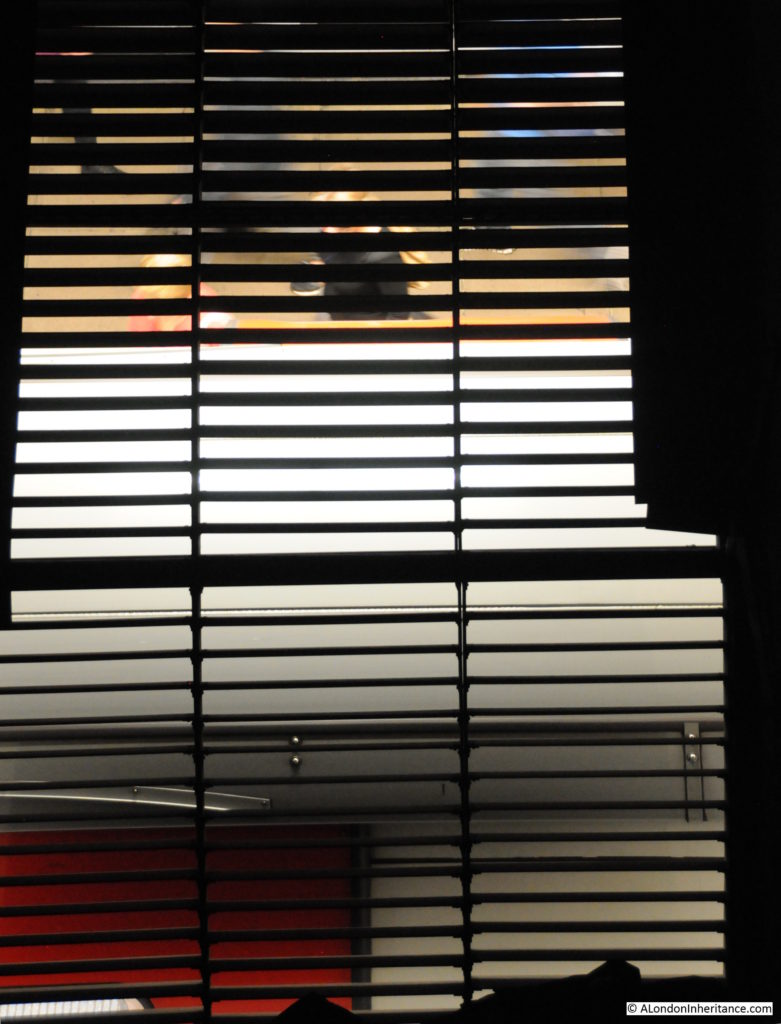 Back along the tunnels: 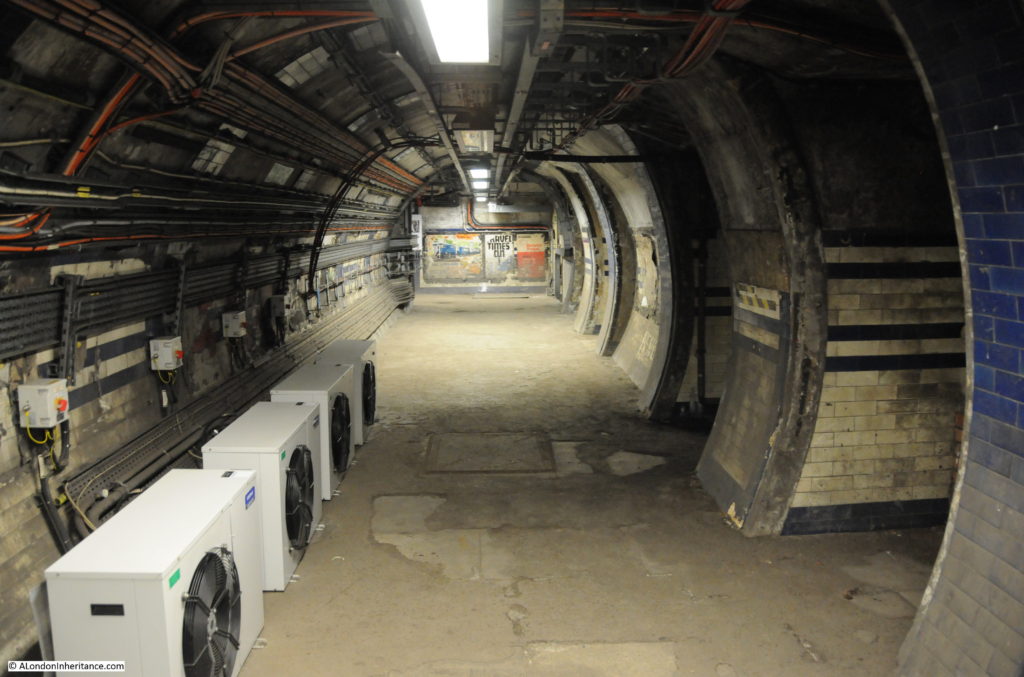 View back along one of the tunnels. Lots of tools stored along the tunnel edge: 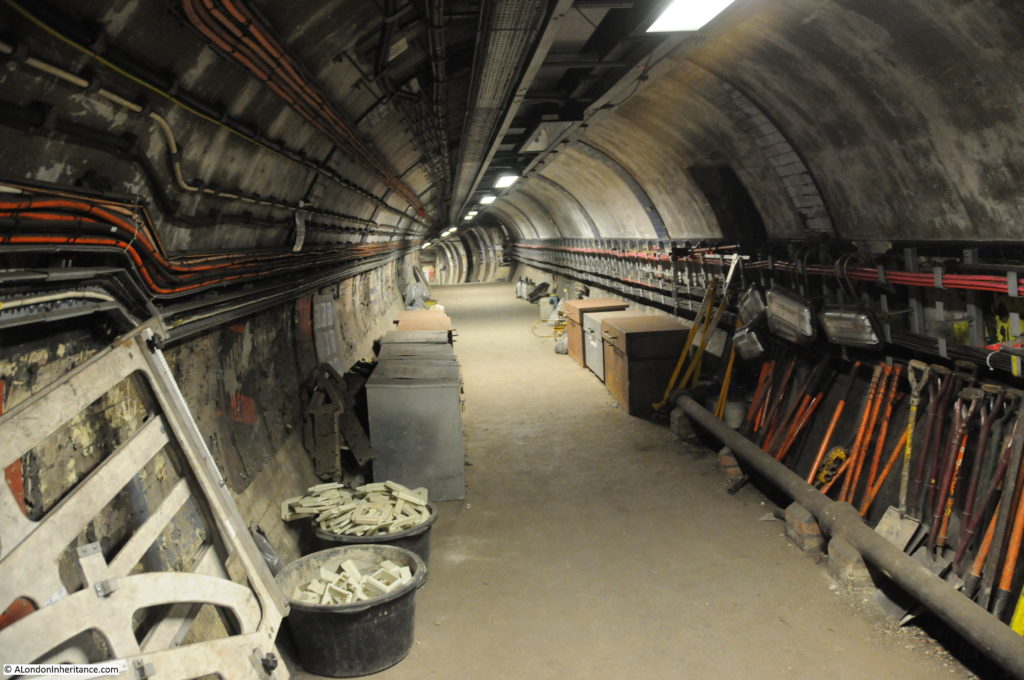 Another view along the tunnels 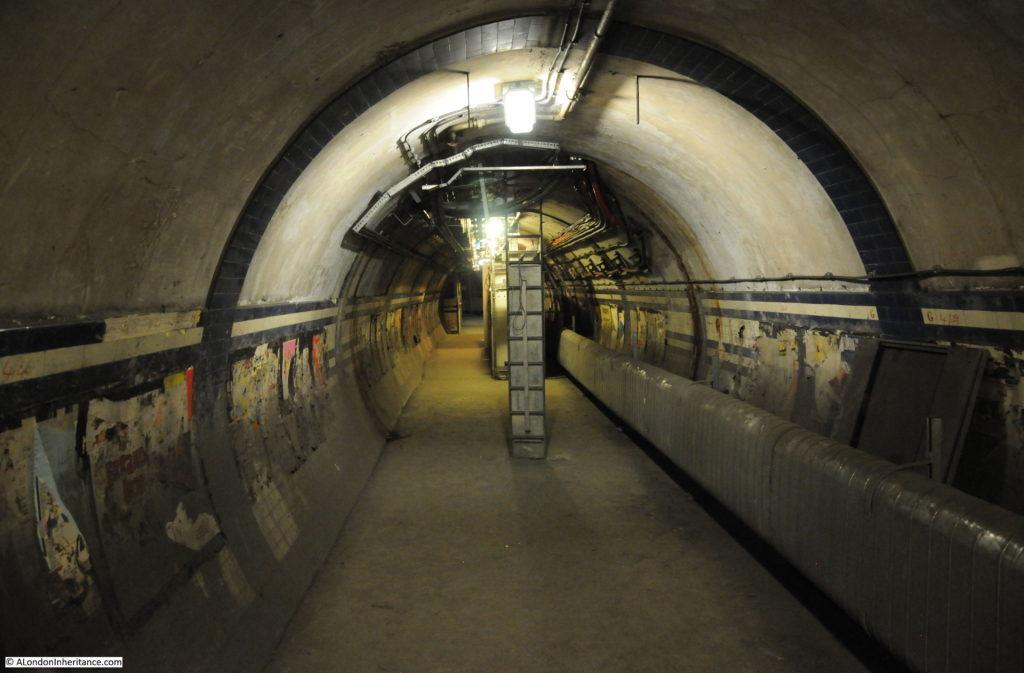 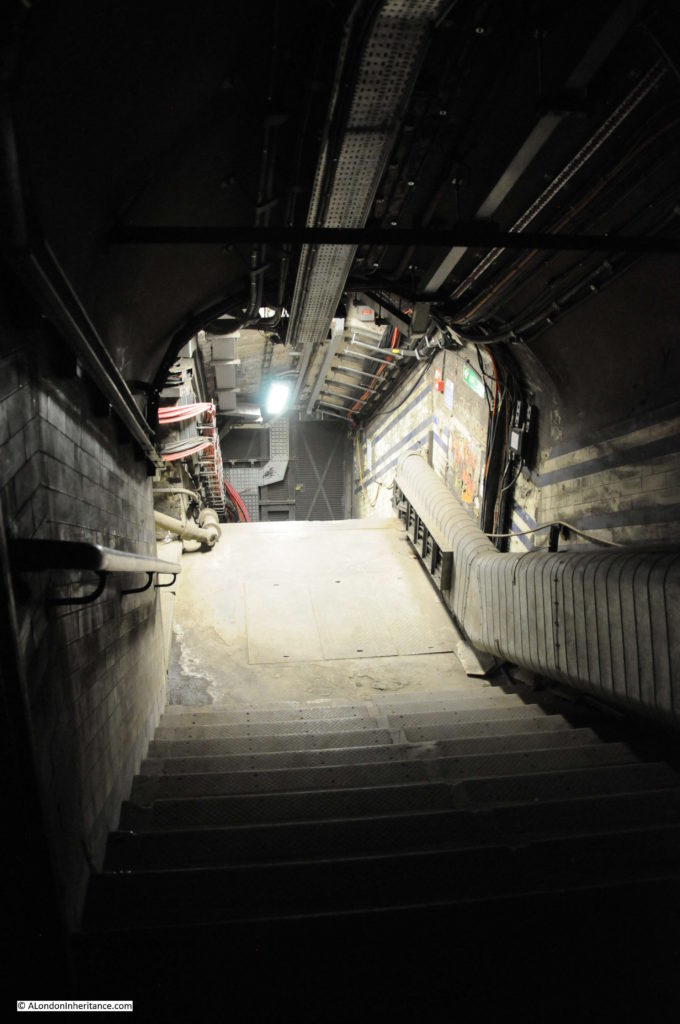 This is the fifth Hidden London tour by the London Transport Museum that I have been on over the last couple of years and in someways, once you have seen one tunnel you have seen them all, however they are all unique.

They each tell part of the story of how London’s Underground system has evolved over the past hundred plus years. Initially, individual lines often competing with each other, now part of an integrated transport system.

Some, such as these at Euston Underground Station provide a snapshot of the time when they were closed, the walls still covered in the posters that the last passengers would have seen when they last walked these tunnels in April 1962.

The Hidden London tours run by the London Transport Museum are excellent and provide a fascinating view of the old tunnels that run alongside the tunnels that carry thousands of passengers every day.

Tickets for Hidden London tours can be purchase here.