I had intended to publish a different post, however work and other commitments have slowed down research, so for today, a brief post on one of the design and construction wonders of London. For a number of years, the London Transport Museum under their Hidden London brand have run a fascinating series of tours of those parts of the underground network that you do not usually see.

Last year, a new station was added to the list of tours – Piccadilly Circus – and as usual, it is fascinating to get a glimpse of some of the infrastructure and tunnels hidden behind the tunnels now in general use. These tunnels show how stations have developed over time, and this was the focus of the Piccadilly Circus tour, not a long tour in terms of the area covered, but a tour packed full of information.

Leaving the public areas of Piccadilly Circus, and a new set of tunnels appear, dating from the first incarnation of the station: 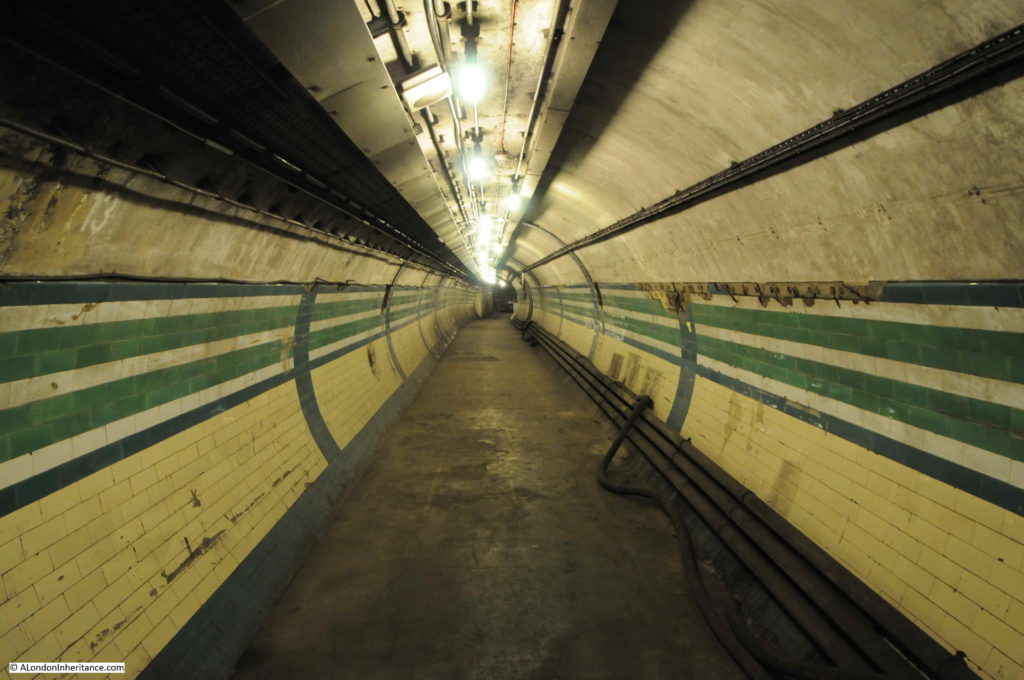 The original Piccadilly Circus station opened in 1906, however due to the station’s central West End location, the volume of people using the station grew rapidly. In 1907, 1.5 million passengers were using the station annually, and by 1922 this had risen to 18 million, and passenger numbers were expected to continue growing. 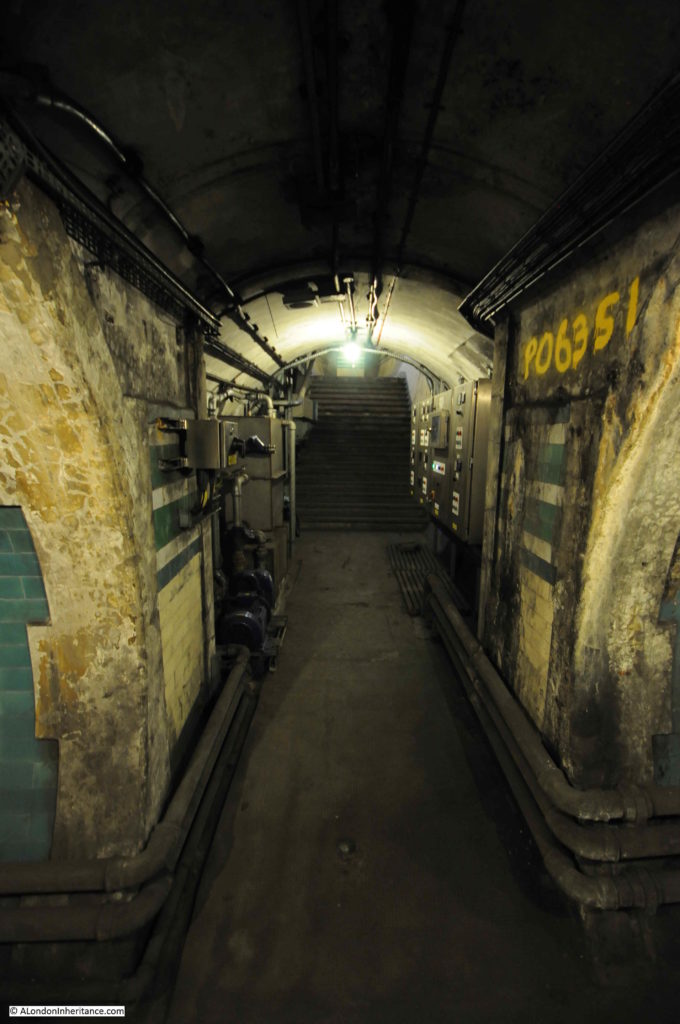 The original station was too small, and making small changes to the station would not support the growing numbers of people using the station. Lifts were a distance from the platforms and lifts really needed to be replaced by escalators, larger entrances were required along with a larger ticket hall.

There was considerable development in the area, including the redevelopment of many of the buildings along Regent Street where existing buildings would be replaced by six storey buildings. The need for a larger station was urgent.

The original plan was for a new domed ticket hall below Eros / the Shaftesbury Memorial, however the final scheme went for a new flat roofed ticket hall surrounded by an oval shaped passage which provided access to the stairs leading up to the street entrances. The station would broadly follow the dimensions of Piccadilly Circus above ground.

New banks of escalators would be installed between the ticket hall and an intermediate landing, with further escalators leading down to the Bakerloo and Piccadilly lines. It would be a major engineering and construction project. 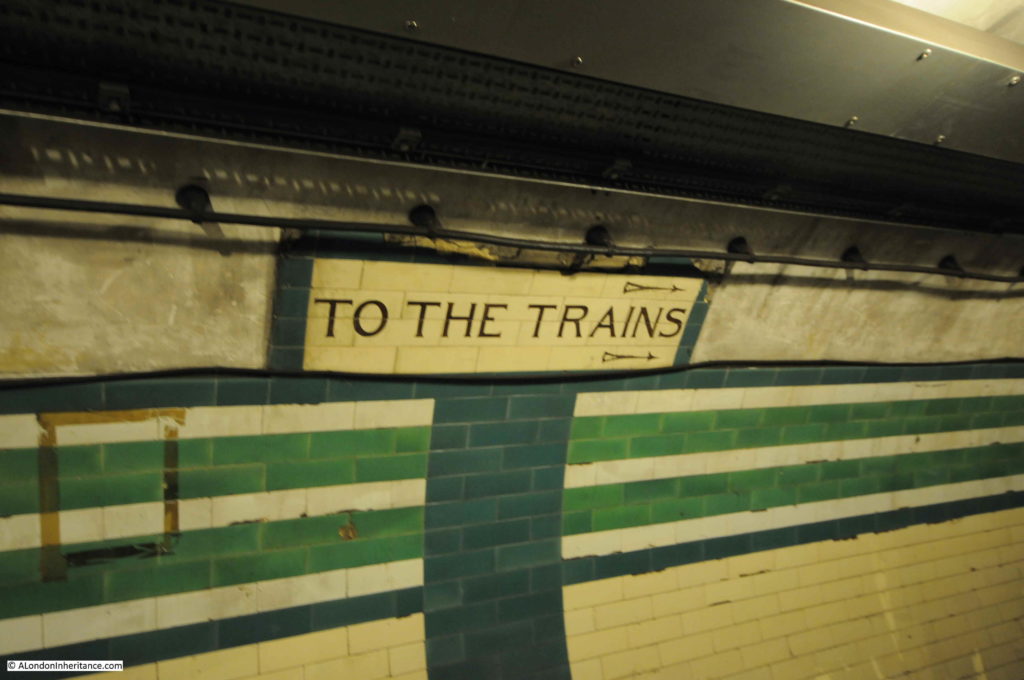 To facilitate the work, the statue of Eros and the Shaftesbury Memorial were moved to the Victoria Embankment Gardens, and a construction shaft was sunk.

One of the major problems with such a large construction site in the centre of the West End was the amount of services that were buried below the surface, in the way of the new station. These had to be diverted away from the site, or transferred into a 12ft diameter pipe that had been installed around the circumference of the new station. 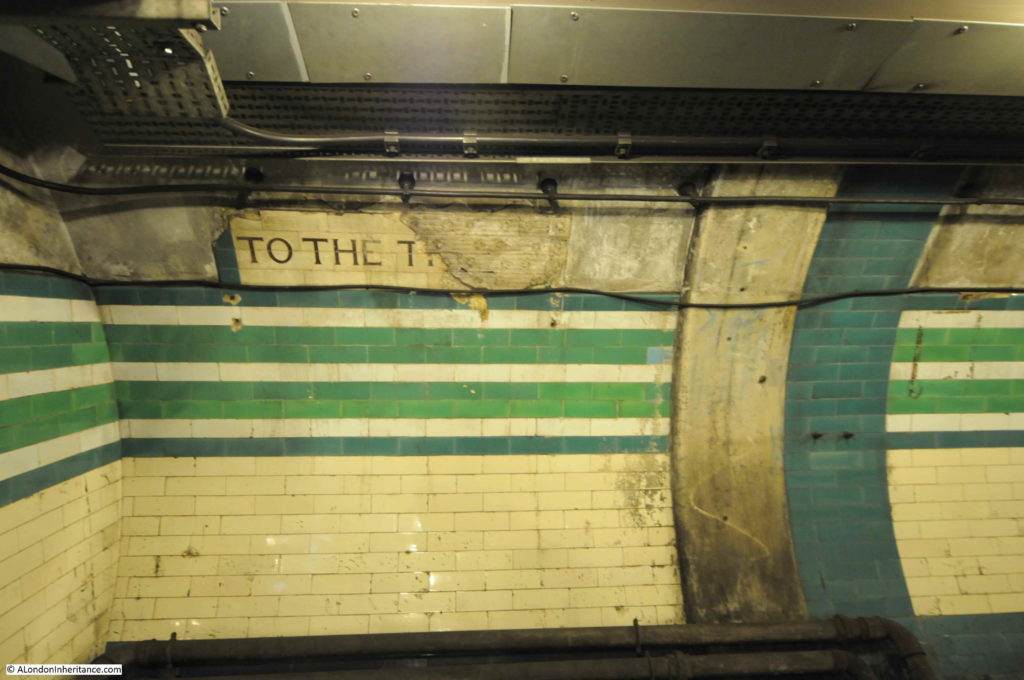 The new station was opened on the 10th December 1928, by the Mayor of Westminster, with the first public users of the station being given access later that afternoon.

The original station was closed on the 21st July 1929 and Eros / the Shaftesbury Memorial was returned to sit above the new station, on the 27th December 1931.

The considerably enlarged ticket hall and the new Otis escalators provided a Piccadilly Circus station that was ready to support the numbers of passengers using the station as London entered the 1930s, and for many years to come. 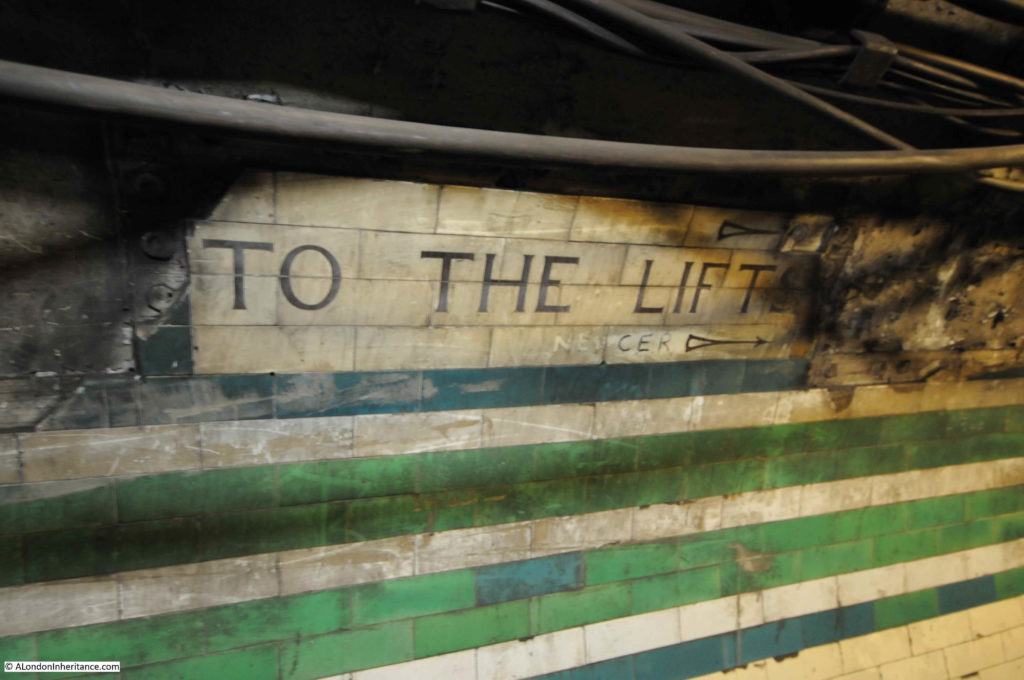 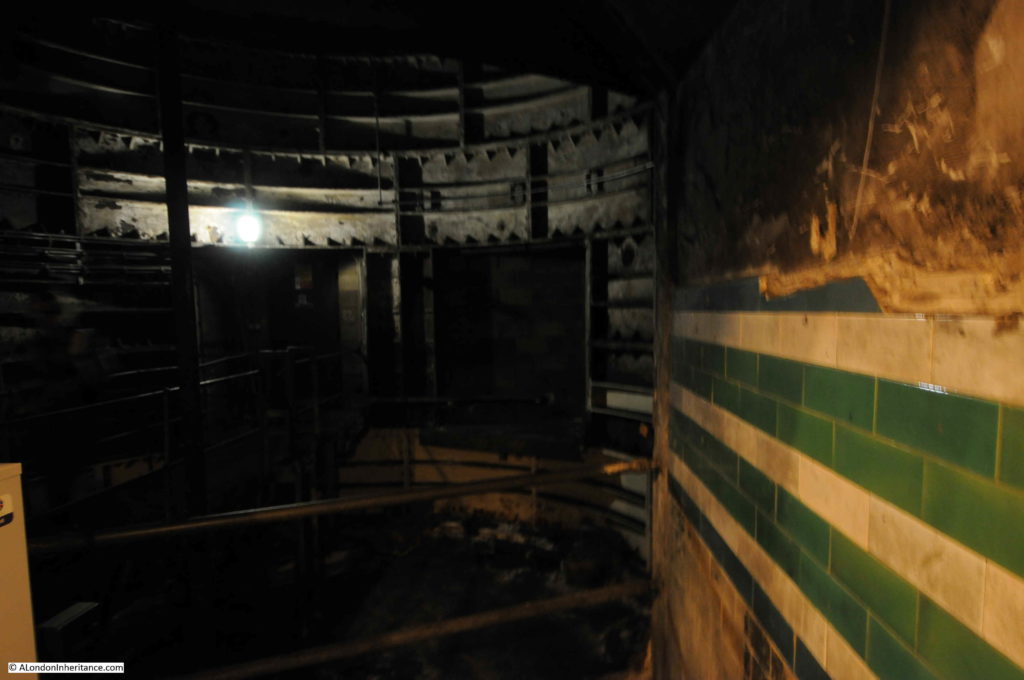 Looking up one of the original lift shafts: 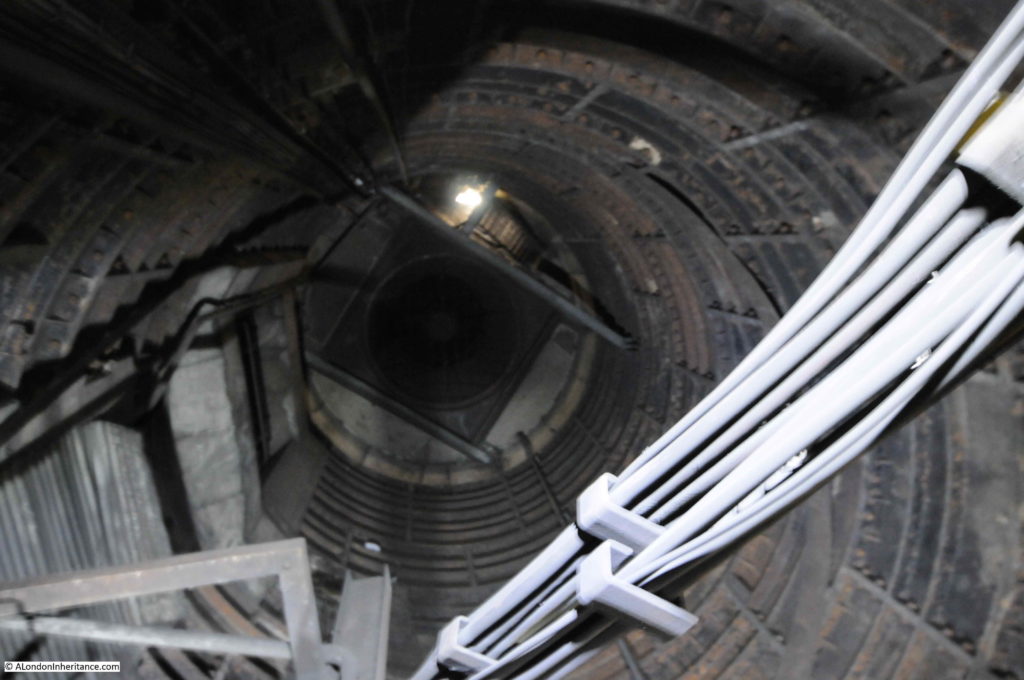 To the trains signs still point to where early 20th century passengers would have walked to get down to the platforms. 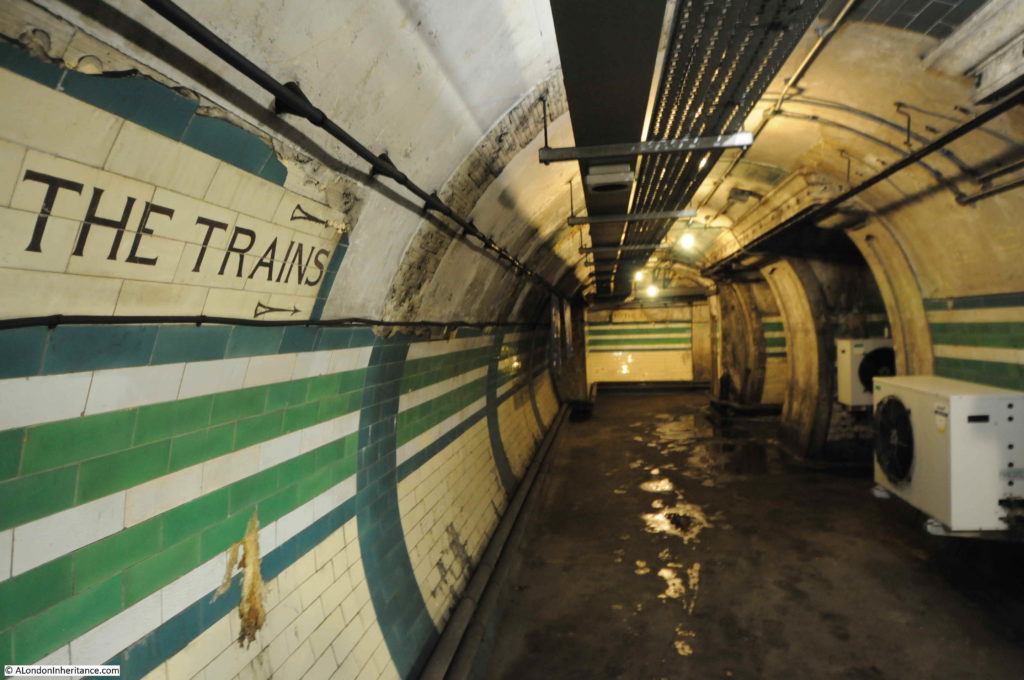 In a disused underground tunnel it is always intriguing to wonder just what is after that curve in the tunnel: 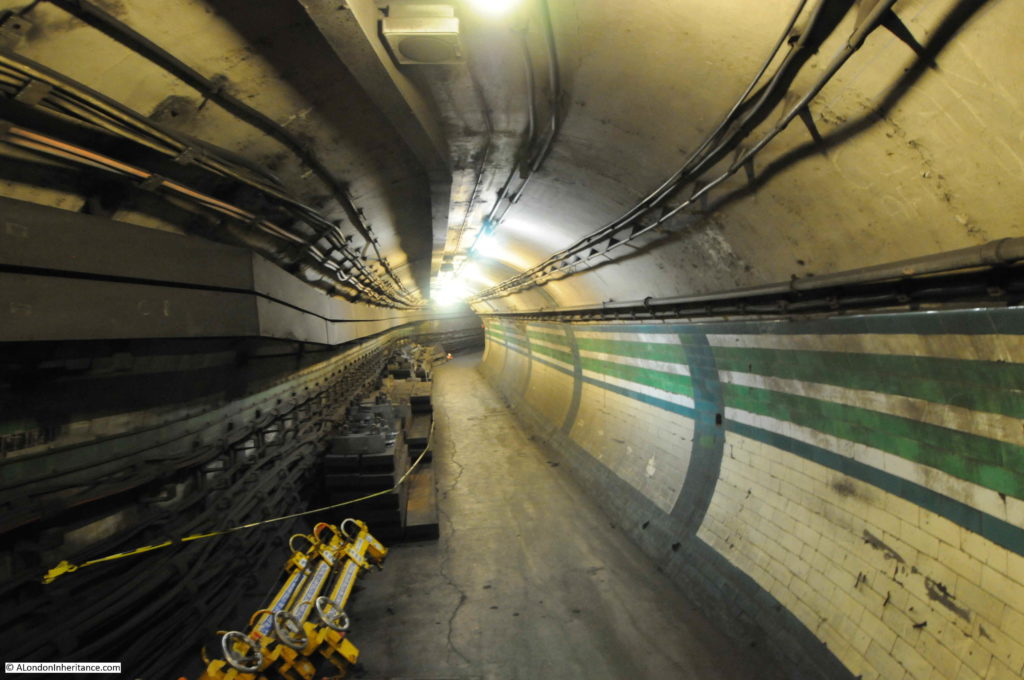 Although the new tunnels and escalators provide access from the ticket hall down to the platforms, the old tunnels still provide a very useful purpose. In an environment where space is at a premium, having areas available to store equipment is valuable. 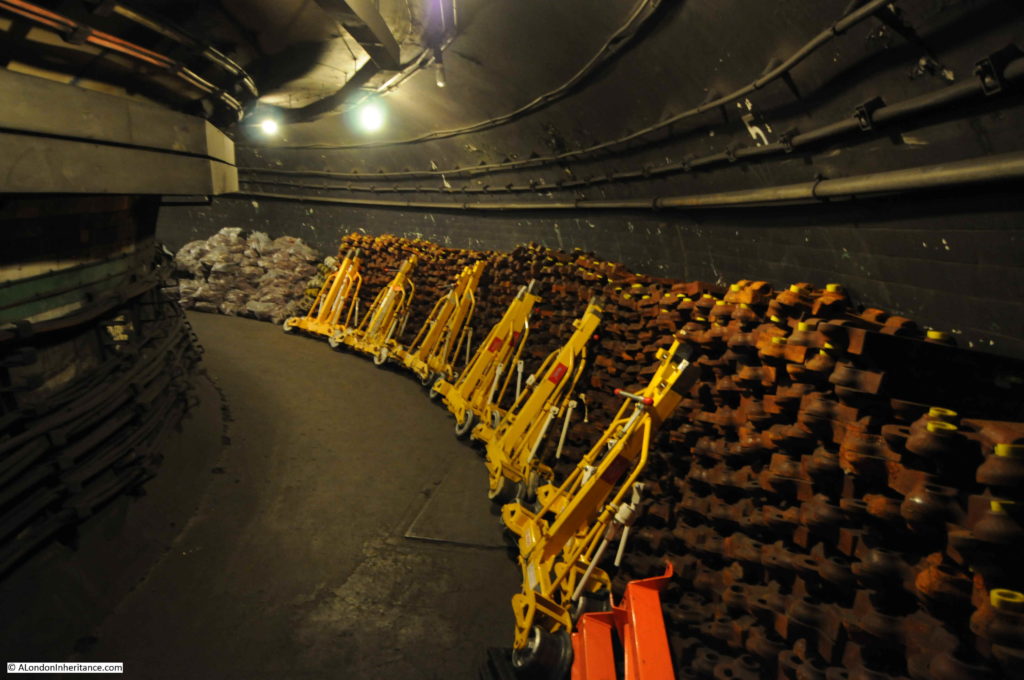 The tunnels explored in the tour provide a reminder of how London’s underground system has grown, and the major construction works needed to continually support the growth in passenger numbers.

The tunnels are a step back to the original Edwardian Station, but perhaps the best place to admire Piccadilly Circus station is in the passageway surrounding the ticket hall. Piccadilly Circus was seen as the “hub of Emprire”, and as such needed a design, and quality building and decorative materials to match.

Charles Holden was responsible for the design of the station, and his distinctive style can be seen across the station. The passageway surrounding the ticket hall and the central concourse are clad in cream travertine marble. Decorative pillars and lights are roughly equally spaced around the oval passageway. Their relatively narrow form ensures maximum space is available for passengers walking between surface and the escalators through the ticket hall. 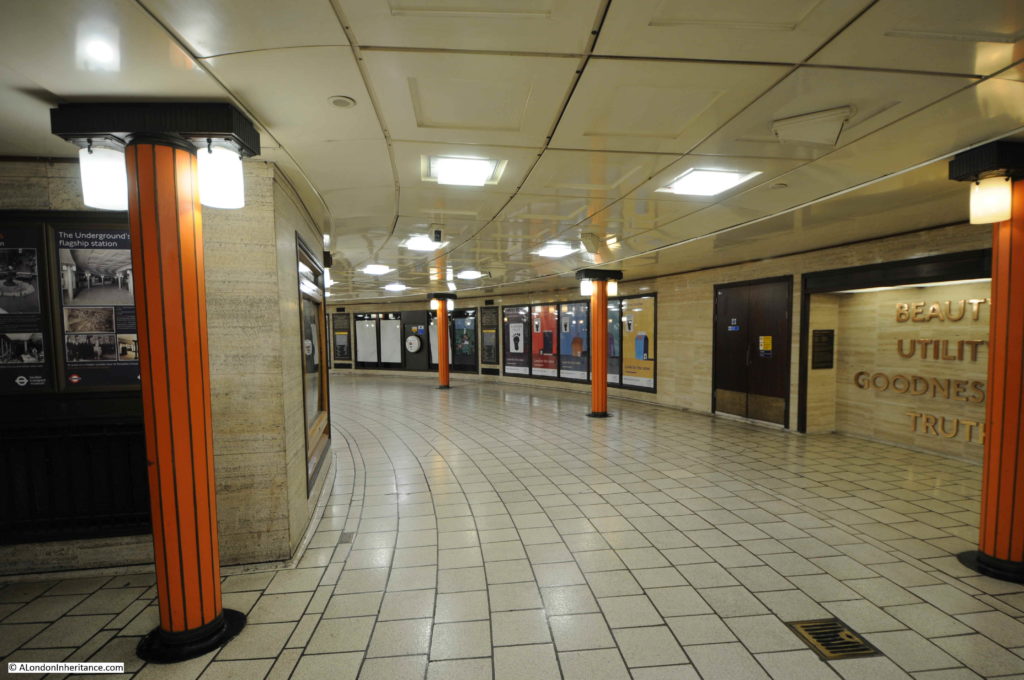 The ticket hall was restored in 1989, and in 2016, on the 75th anniversary of his death, a commemoration of Frank Pick was installed. Frank Pick was the Managing Director of London Underground in the 1920s, and was responsible for commissioning architects and designers such as Charles Holden. 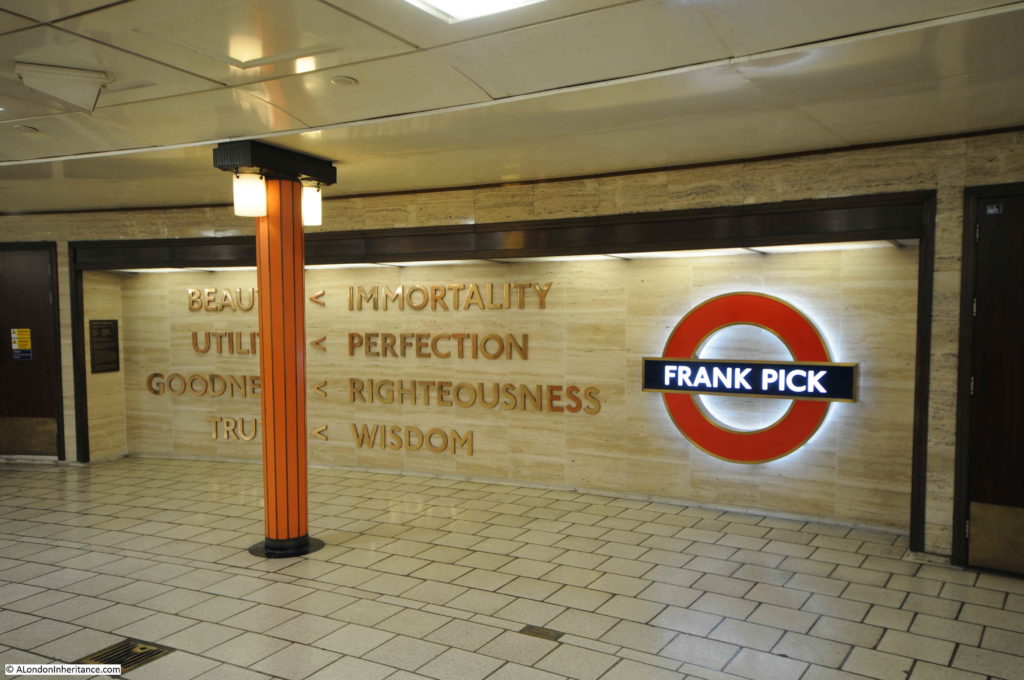 The design of the memorial by Ben Langlands and Nikki Bell used words from one of Frank Pick’s lectures which highlighted his approach to design, and that good design contributes significantly to the quality of life in the city.

A very unusual feature in Piccadilly Circus station that dates back to the reconstruction of the station is a world map. The central dark band scrolls across the map to show the local time in the different time zones across the world. The location of the map here in Piccadilly Circus emphasised the view of the station at the time as the “hub of Empire”. 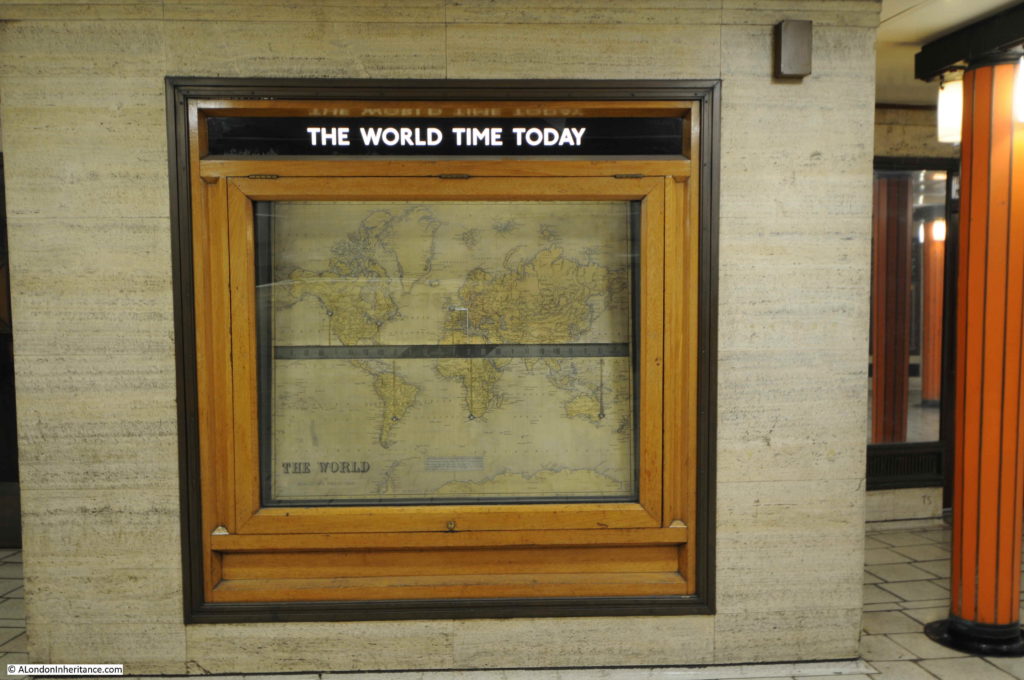 Too often we rush through London’s underground stations, trying to get as quickly as possible between the train and the street, and not taking the time to appreciate the design, engineering and construction wonders that we pass through.

The Hidden London tours provide the perfect opportunity to step back, explore the old tunnels and appreciate the effort that has gone into building a transport system we probably take too much for granted.