The photos we as a family have been taking of London only go back to 1947, so to go back further I also collect any old London postcards I can find with photographs of London. These really help to understand how London has changed, what specific areas looked like at a moment in time and what it would have been like to have been walking the streets when the photographs for these postcards were taken.

The following postcard is from the top of the Monument and shows how much the London skyline has changed over the last 100 years. Long gone are the days when the City churches stood well above their surroundings.

The road to the right is King William Street running up to the Bank. On the left of the photo is the original Cannon Street Station. The platform roof running off the edge of the photo with the station hotel being the large building to the right of the station roof. One of the adverts on the building to the lower right is for the “Aerated Bread Company” – a company formed in 1862 by a Dr. John Dauglish using a special yeast free process to produce an additive free bread. the company also had well over 200 tea shops, many of which were in London. 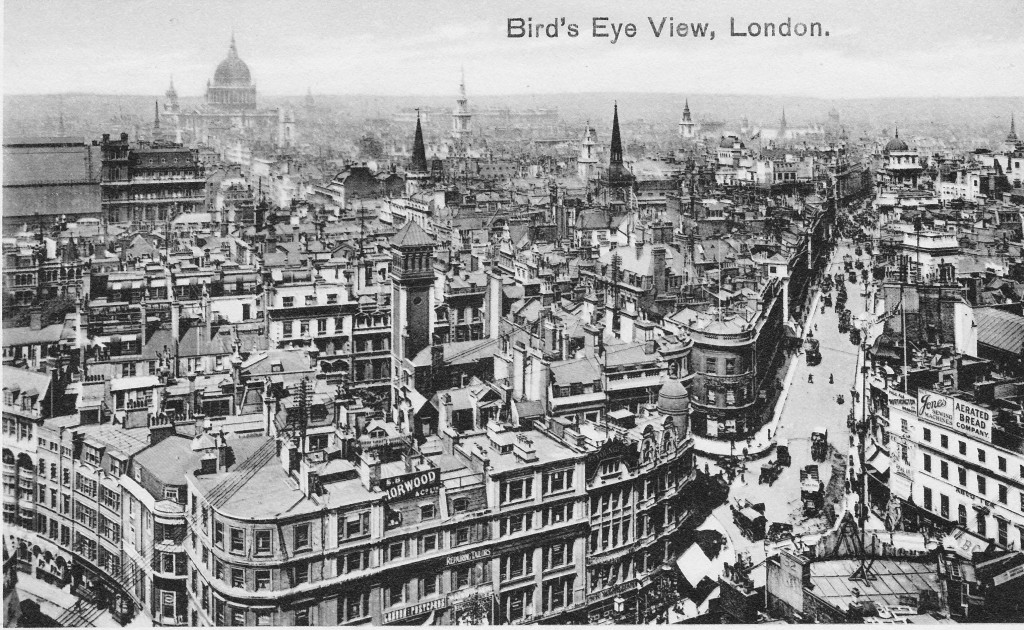 The next postcard is also from the Monument but this time the photographer has moved to the left and much of Cannon Street station is now visible. These old postcards also show how dominant St. Paul’s Cathedral was on the London skyline. 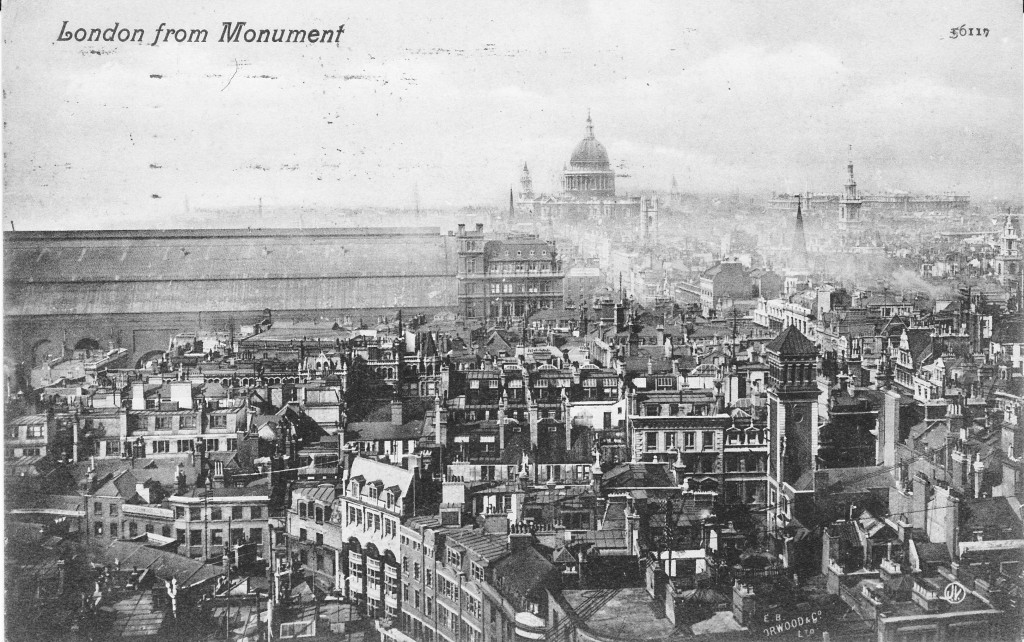 In the following postcard the photographer has moved further round the viewing platform at the top of the Monument and is now looking towards Tower Bridge. Billingsgate Market is to the lower right. Opposite Billingsgate Market is the London Coal Exchange, the building with the ornate tower on the corner. The church tower on the left is that of St. Dunstan in the East. 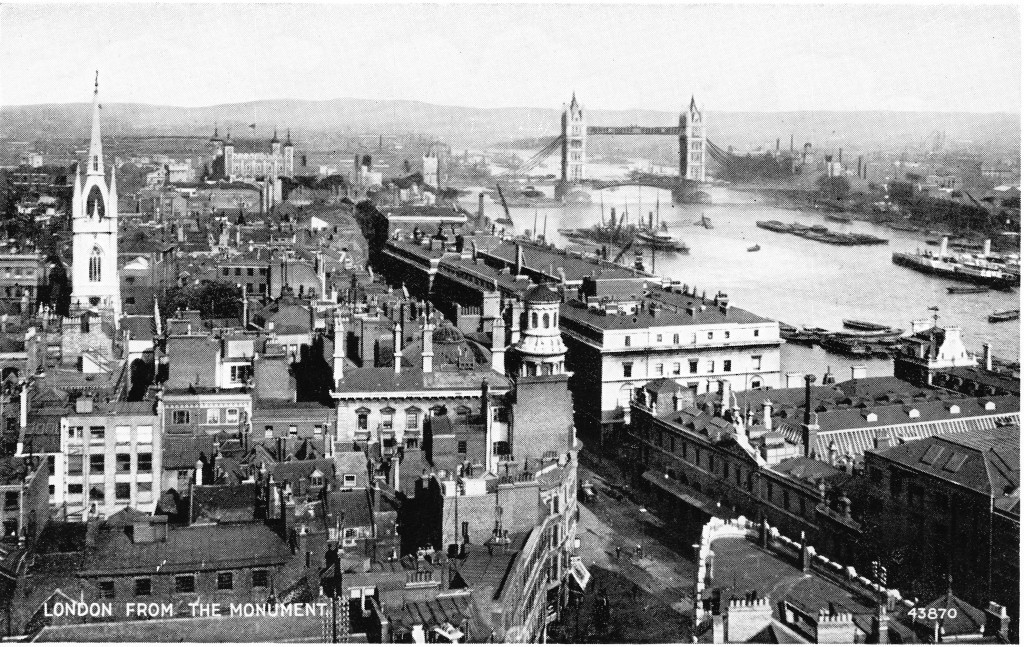 As it still is today, St. Paul’s Cathedral was another favourite spot for views of the London skyline. This time we can look back at the Monument. Compared to today where the Monument is surrounded by much taller buildings,  in the early years of the last century it was one of the City’s highest points. This photo also provides another view of Cannon Street station and the substantial hotel / station entrance at the front. 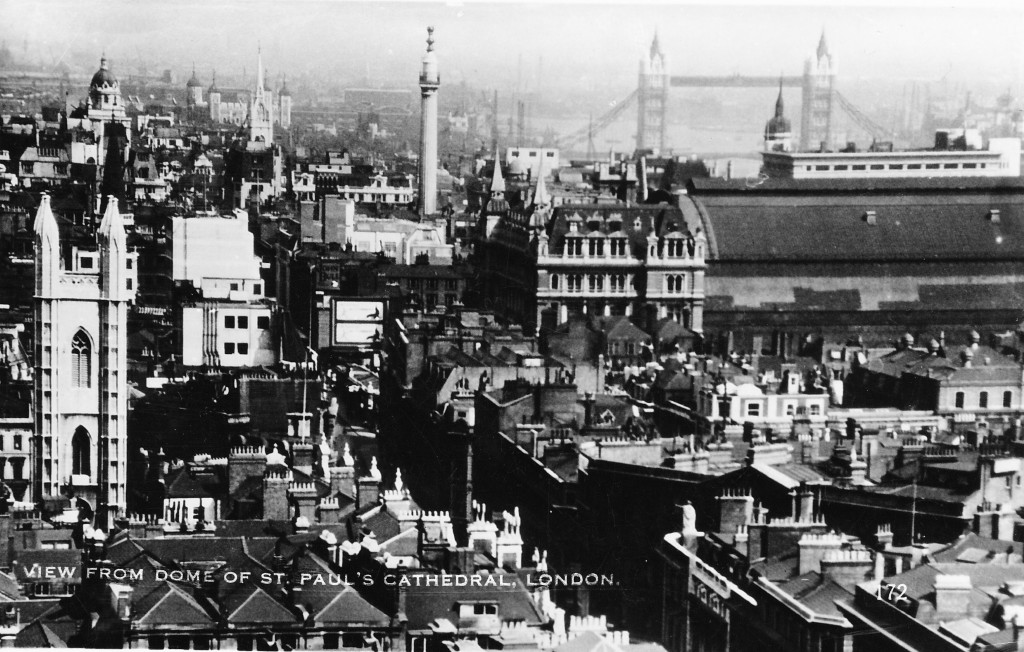 We can continue past St. Paul’s and now have a look at the City from the tower of St. Brides Church, Fleet Street. This photo again shows how dominant the cathedral was and by far the tallest building in London. The church in the foreground is St. Martin-within-Ludgate. The large building to the left is the old Post Office headquarters. 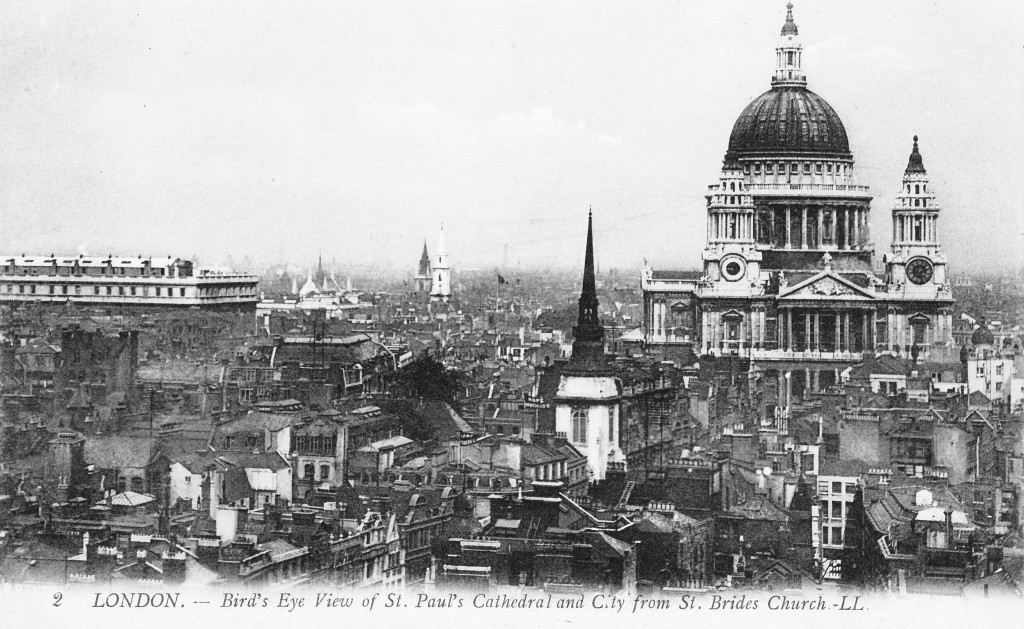 The following postcard is from the Second World War. On the rear of the postcard is an extract from a broadcast speech made by Winston Churchill on the 11th September 1940 at the time when the major air raids on London had begun:

“This is a time for everyone to stand together, and hold firm!” 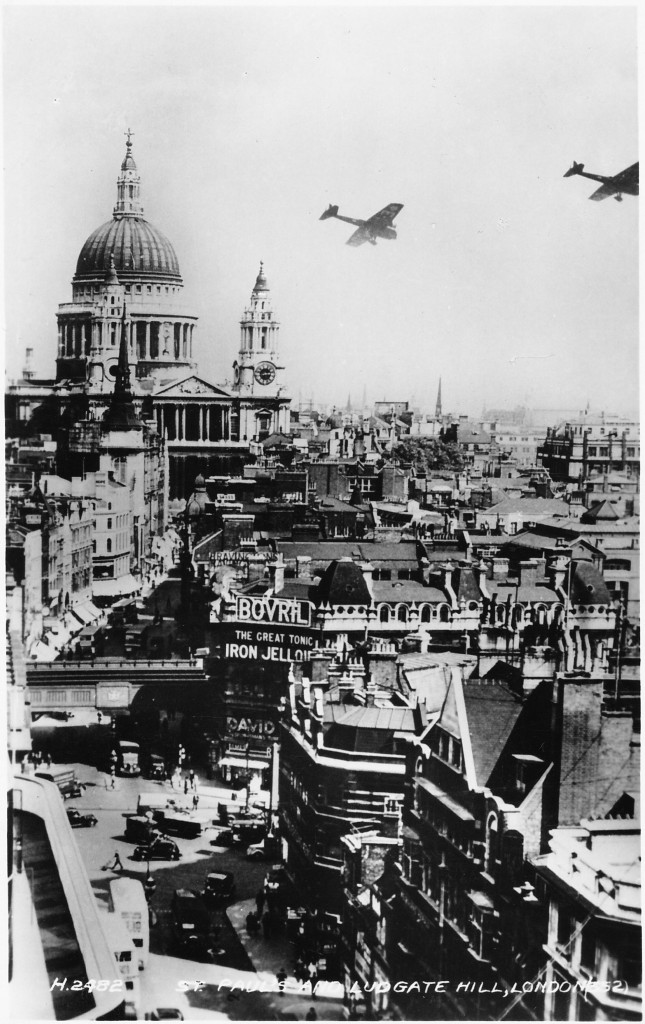 The next postcard also has an aerial view of St. Paul’s Cathedral before the devastation of the area by bombing. This shows how close the buildings used to press up against the cathedral. The area behind the cathedral, Paternoster Row and Square was a major location for the publishing trade with many book sellers and book warehouses. For a view of the devastation to this area see my posts with my father’s photos taken just after the war which can be found here and here. 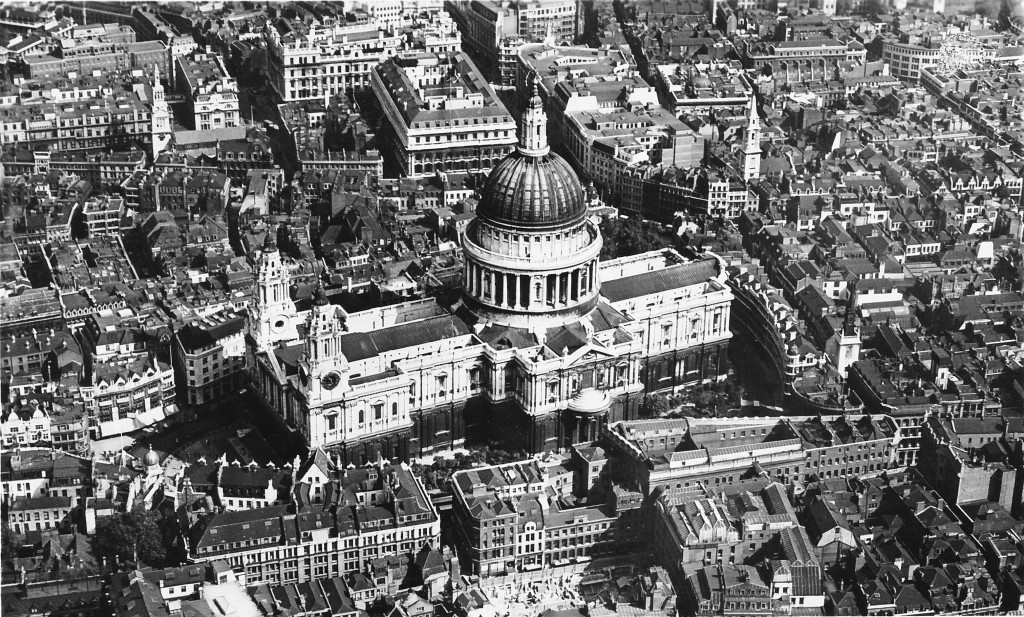 Some old postcards capture a moment of major change in London. The following postcard shows not only the original Waterloo Bridge, but also the temporary bridge to the right that was constructed to carry traffic during the demolition of the old bridge and construction of the new. 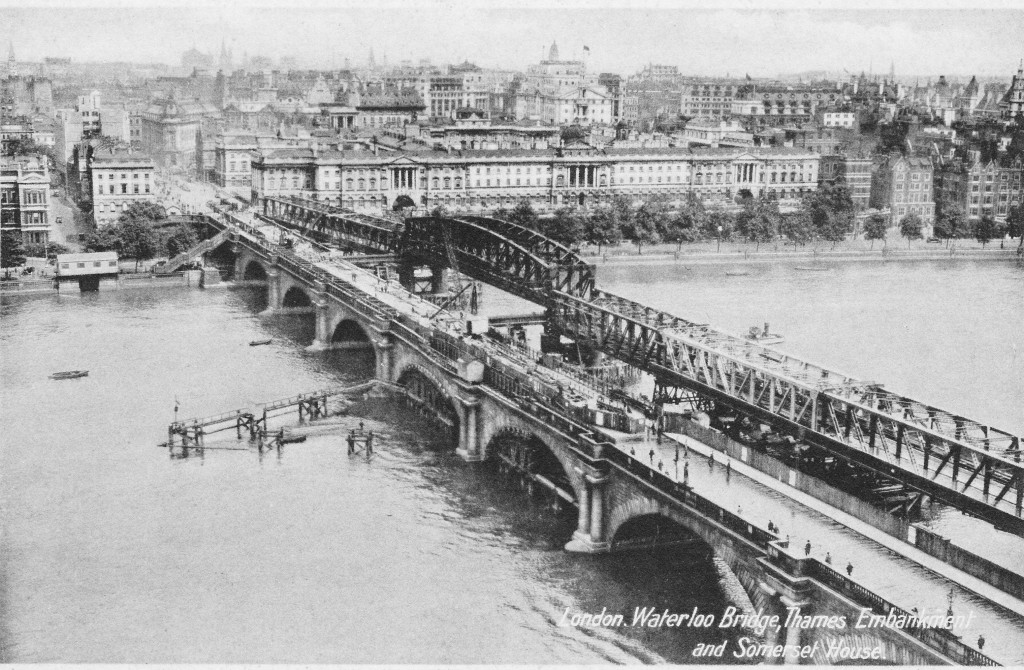 I find the subject matter of some postcards rather surprising. The following two postcards show bomb damage in London during the last war. I would have thought to maintain morale, postcards showing significant bomb damage in the heart of London would not have been available, alternatively they could also have been used to inspire when coupled with the speech extracts on the reverse of the cards.

The first postcard shows the damage to Paternoster Row to the north of St. Paul’s. Both postcards carry extracts from speeches made by Winston Churchill. The first postcard has the same extract as the one above. 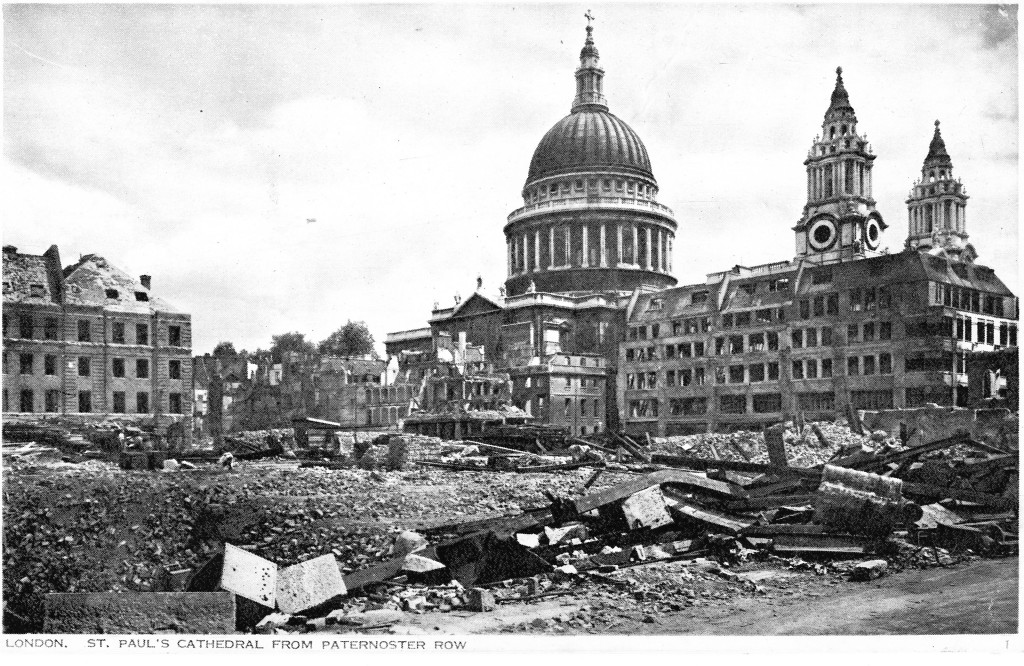 The following postcard shows St. Andrew’s Church from High Holborn. Note the “Passed by the Censor” statement on the lower right of the card.

On the rear of this postcard is the following extract from one of Winston Churchill’s speeches:

“Let us all strive without failure in faith or in duty” 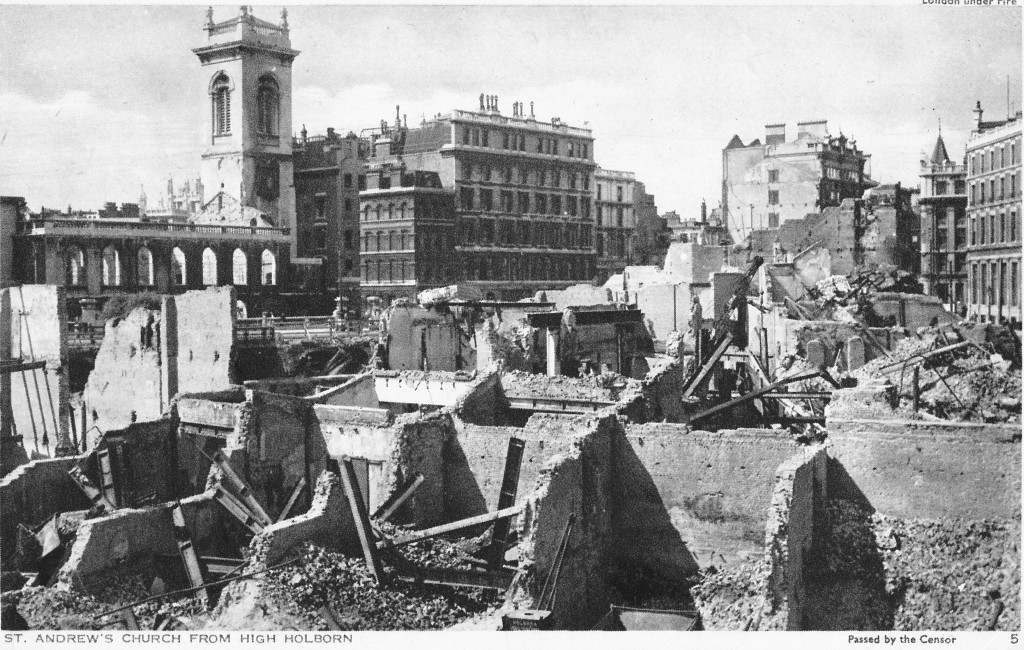 The following postcard shows the view from the Victoria Tower of the Houses of Parliament. This is a post war card of the late 1940s / very early 1950s, and what I find interesting with this one is the empty patch of land on the right between Hungerford Bridge and County Hall. The photo for this postcard had been taken at a moment in time when the land had been cleared in preparation for the construction of the Festival of Britain. The Shot Tower can also be seen between Hungerford and Waterloo bridges. 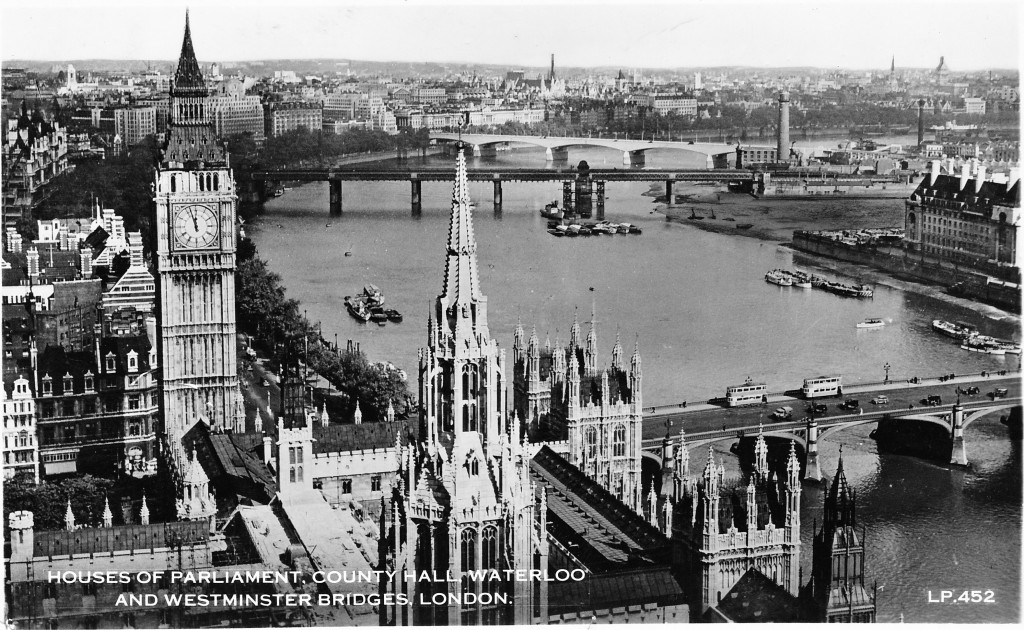 Postcards also show the busy streets of London during the first years of the 20th century. The following postcard shows the view down Cheapside with the church of St. Mary-le-Bow on the right. If you look on top of the buildings on the left you can see the telegraph poles that carried the wiring for the early telegraph / telephone system in the City. This was before the installation of underground cabling and much of the wiring was carried across the roofs of the City. 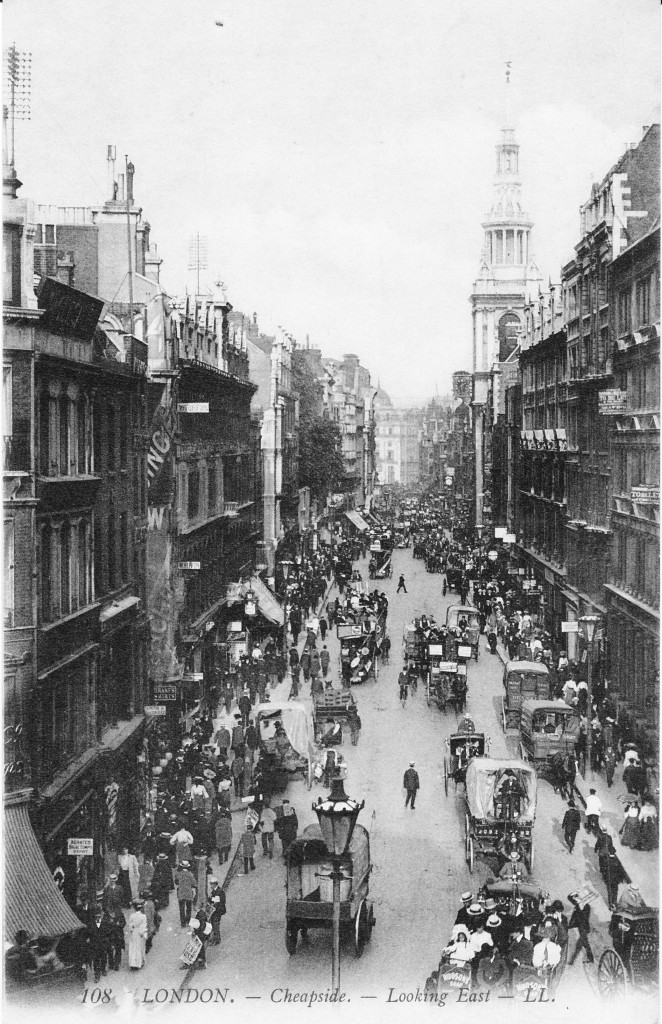 And this postcard shows a very busy Piccadilly Circus. 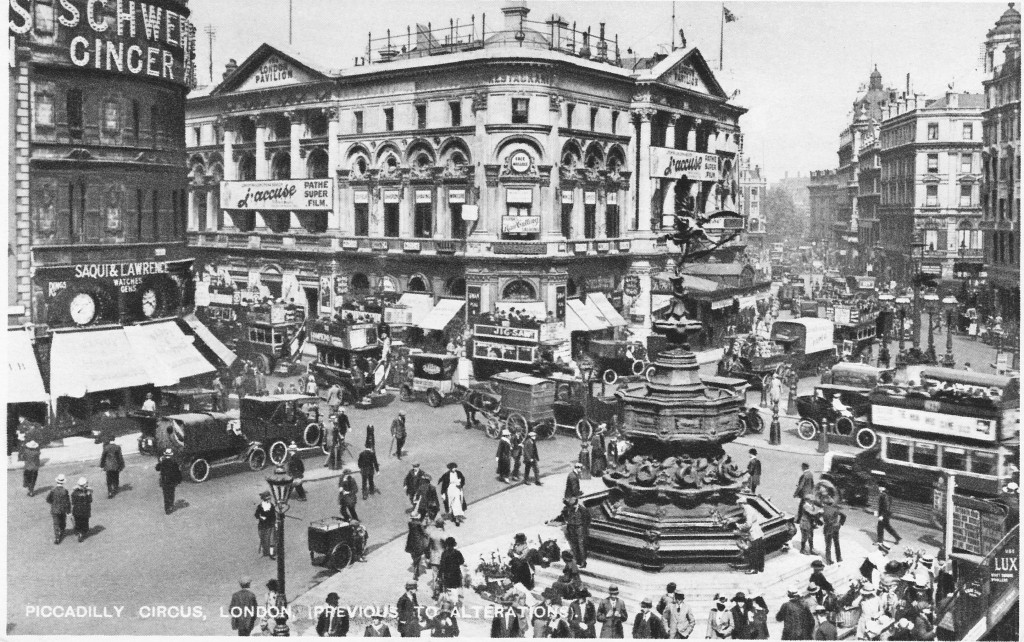 The following postcard is looking down the Strand towards Trafalgar Square. The building to the right is Marconi House. Originally built as the Gaiety Restaurant, it was taken over by the Marconi Company in 1912 and played a key part in the development of wireless. During 1922 and 1923, the original 2LO – London Broadcasting Station was broadcast from this building.

Wrapped around the stairs on the buses are adverts for some of the consumer brands of the time – Wrigley’s, Swan Vestas and Dunlop. 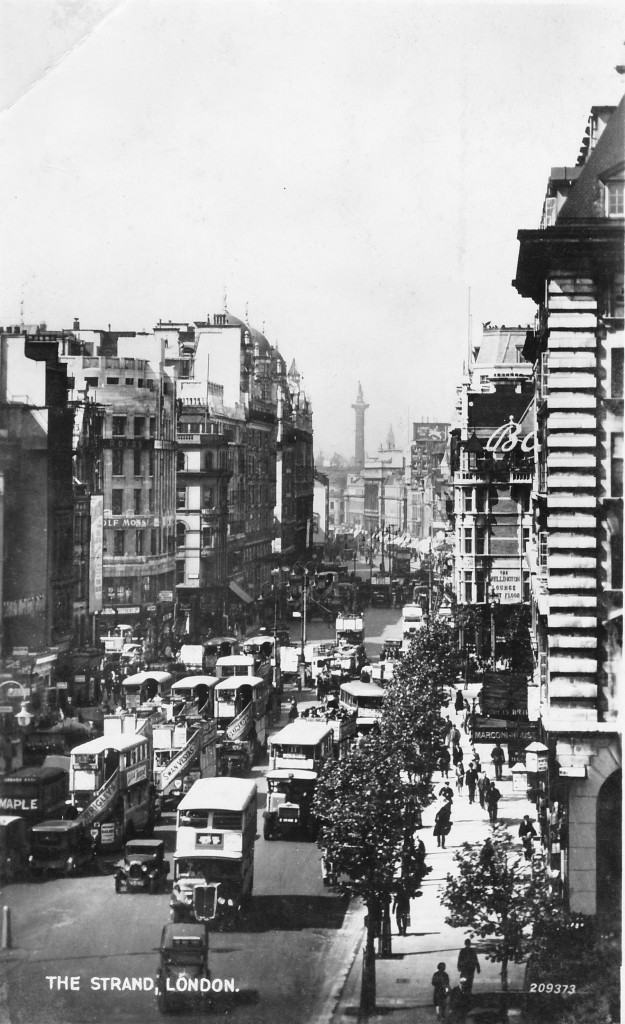 Postcards also show that London has always been a centre for tourists and visitors with some of the postcards above being sent from London to destinations across the world.

Today, with the ability to take a photo on a phone and instantaneously send it across the world, the future of postcards looks rather bleak, however for roughly the past 150 years they provide a fascinating view of a changing city.

5 thoughts on “Postcards From London”