For this week’s post, we continue on our walk around the Stone Gallery of St. Paul’s Cathedral, 376 steps and 53 meters from the cathedral floor. We have covered the south and east views and this week it is the turn of the north and south and the first photo is looking roughly due north: 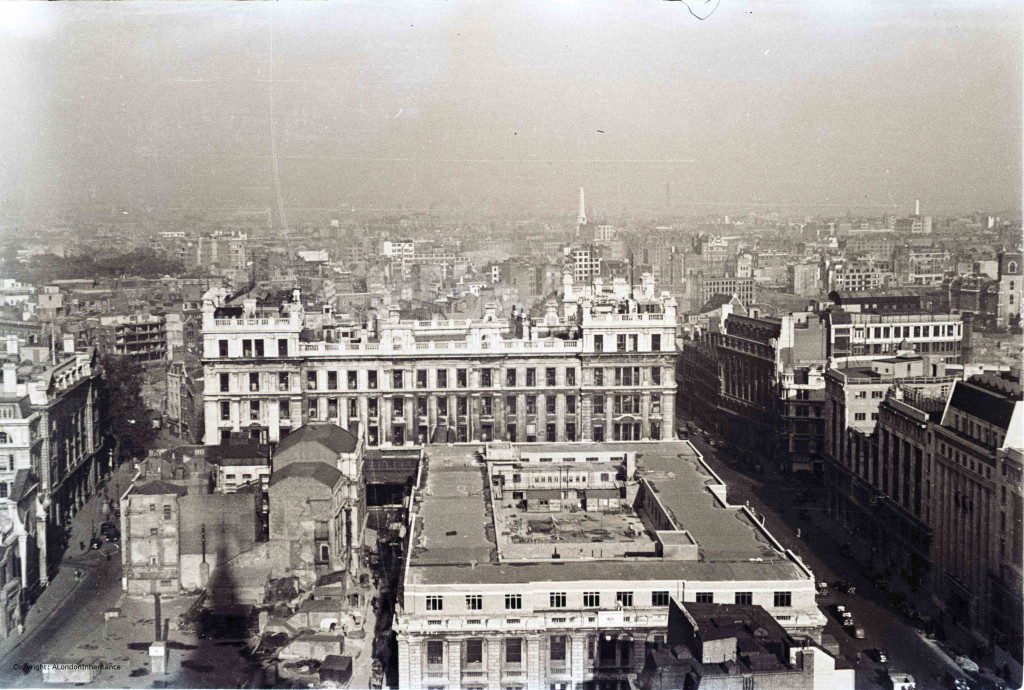 Whilst the roads are still in the same position, the view again is very different. In the following photo, apart from the streets my only reference points are the building on the extreme left of the photo and the church tower of St. Giles, Cripplegate on the right. These appear to be the only buildings that remains from the immediate post war period. 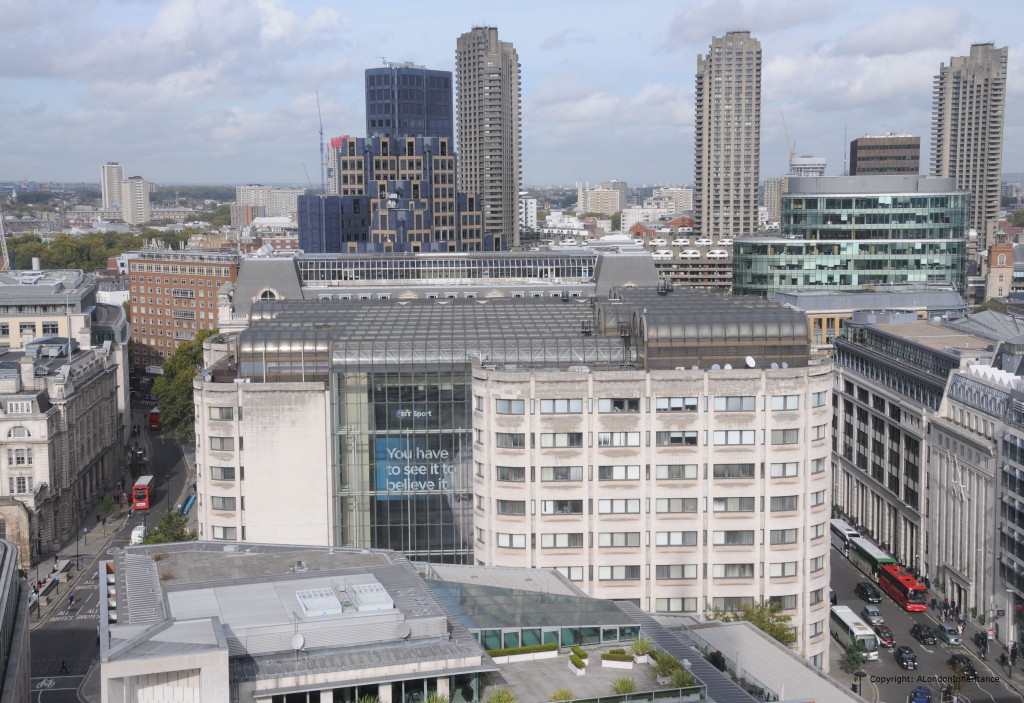 Now walk a few feet to the left and look out over to Christchurch Greyfriars. 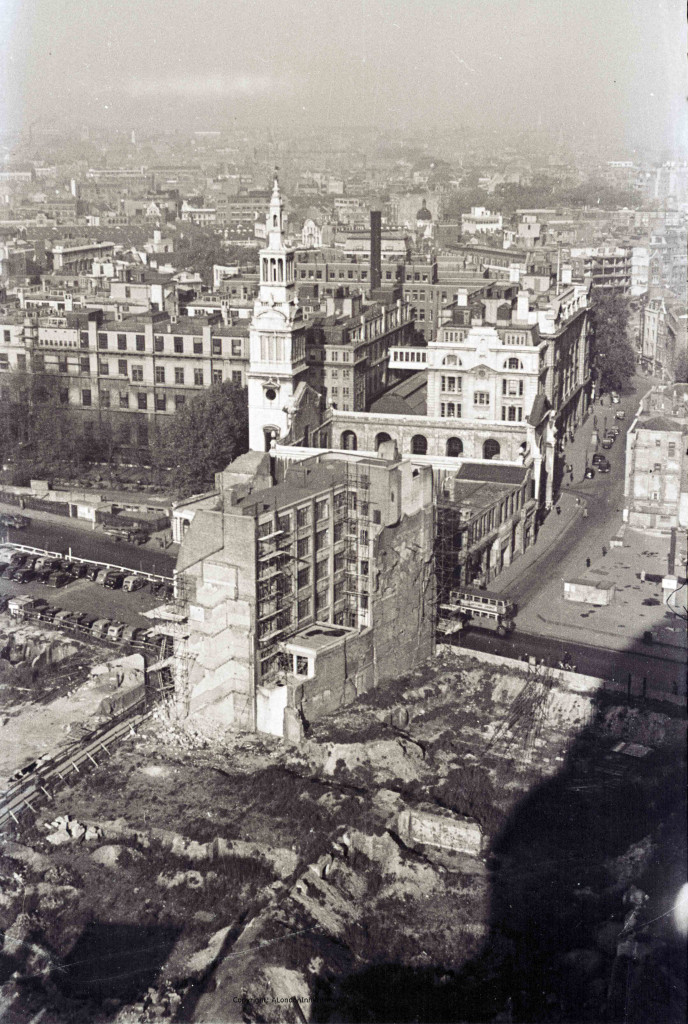 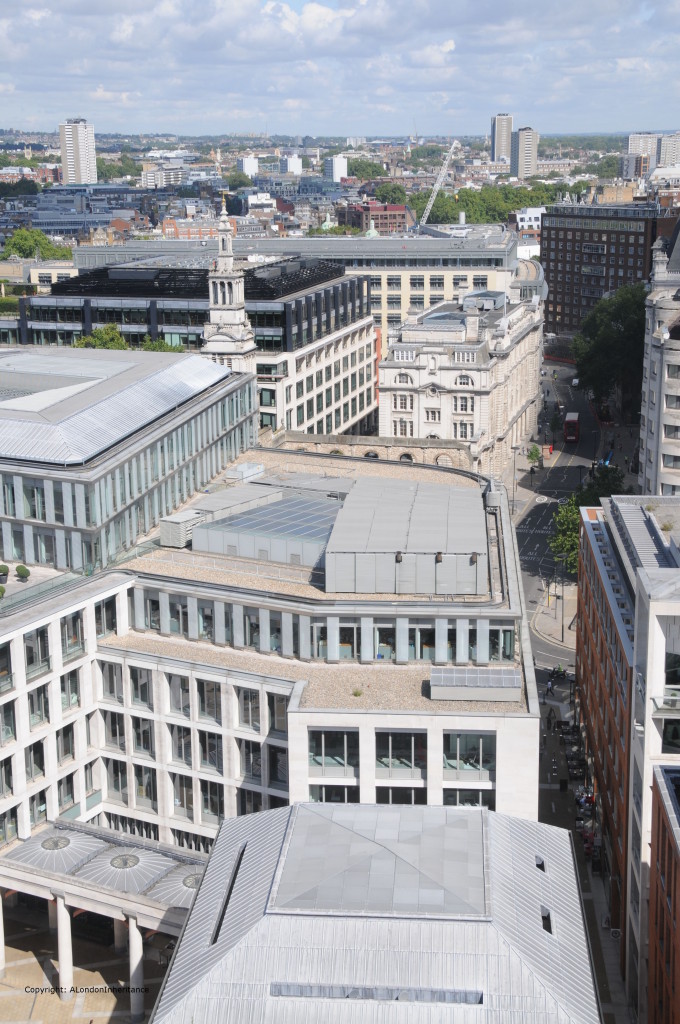 The above photos and the ones below are looking down on the area of Paternoster Square and Paternoster Row.

Paternoster Row was mentioned in the thirteenth century when Stow states that it was built around 1282 and that rents from the houses were used for the maintenance of London bridge. Before the war, this area was well-known for book publishing, distribution and warehousing, a fact that contributed to the intensity of the fires that raged in this area. This trade started well before the 20th century. It was in Paternoster Row in 1720 that William Taylor published Robinson Crusoe after Defoe had tried all over London to sell the manuscript. In 1724 Taylor’s publishing business was purchased by Thomas Longman who had founded the publishing firm of Longman, Green and Company also in Paternoster Row. Longman is still an imprint today, owned by the Pearson publishing company.

The following paragraphs are from the book “The Lost Treasures of London” by William Kent and give some idea of the dreadful loss to the long-established businesses that use to thrive in the City.

“On the night of the 29th December 1940 the bombs rained down here and Paternoster Row was more completely destroyed than any other City thoroughfare of importance. All that remained were a few buildings at the east end. The devastation in respect of books has been indicated by Evan Pughe, the Deputy Chairman of Simpkin Marshall and Co. Ltd:

On the night of the 29th December 1940, Simpkin Marshall, Ltd, the greatest distributor of English books in the world, carrying the largest comprehensive stock, lost approximately four million books when their premises in Ave Maria Lane, Stationers’ Hall Court, Stationers’ Hall, Amen Corner, Paternoster Row and Ludgate Hill, were entirely destroyed by the incendiary bombs of the enemy.

This disastrous fire eliminated everything. All the old records of the business going back a hundred and thirty years were destroyed; and most important of all, the great cataloguing system, the only one of its kind in the world, dating back for a hundred and fifty years. These catalogues were handwritten records of books, cross-referenced, so that books on all subjects could easily be traced. These records could immediately give books that had been published on any subject during the hundred and fifty years covered by them, the publisher, date of publication, the price, the size of the books, etc. They were invaluable and their loss will be felt by the reading public for many years to come.”

As a result of the blitz, Simpkin Marshall went out of business. It is hard to imagine the loss that must have been felt when Londoners returned to their place of work after an air raid and realised not just the loss of the buildings, but also what was held within and long established businesses.

Turning a bit more to the left and peering down we can get a glimpse of the Chapter House and the road that was St. Paul’s Church Yard that closely circled the cathedral.

The five circular shapes just behind the Chapter House are the impressions left by water storage tanks. Access to water was always a problem during the blitz. Damage to water distribution pipes, blocked roads and low tides in the Thames all contributed to the lack of the plentiful supplies of water needed to fight the sheer number of fires that would take hold after a raid. After the Paternoster area was destroyed on the 29th December 1940, the area was quickly cleared and these water tanks were built and kept full ready for the next raid.

Further back can be seen the rectangular shape and surrounding streets of Paternoster Square. 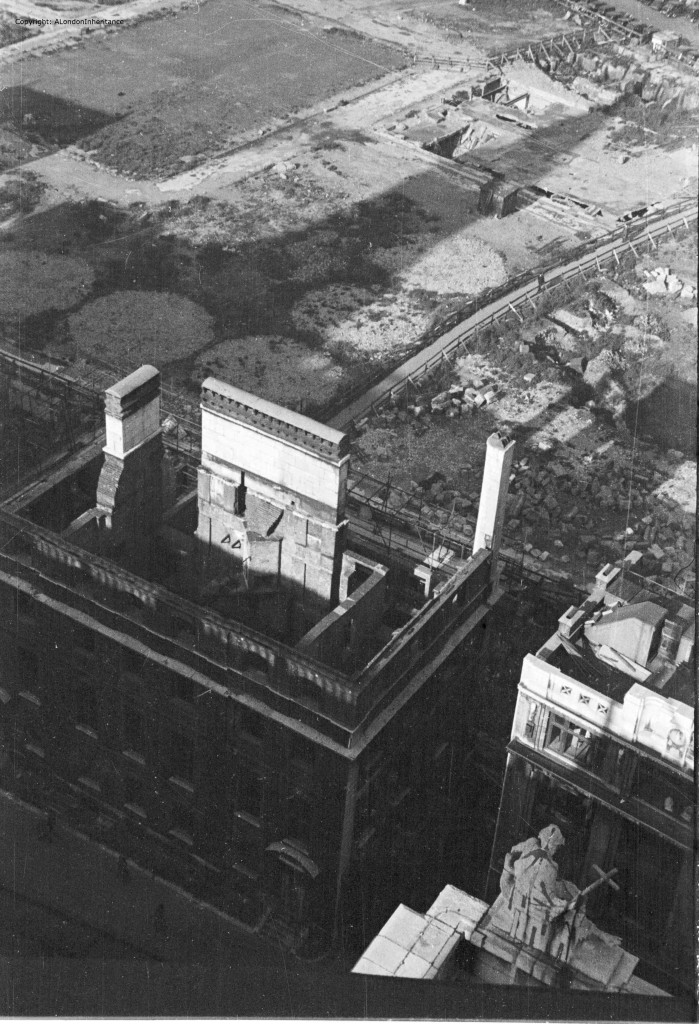 I was able to frame the following 2014 photo reasonably well using the statue at the bottom right, to take a photo in exactly the same position as my father 67 years ago. The current incarnation of the Chapter House is currently undergoing re-building / restoration work hence the protective covering. 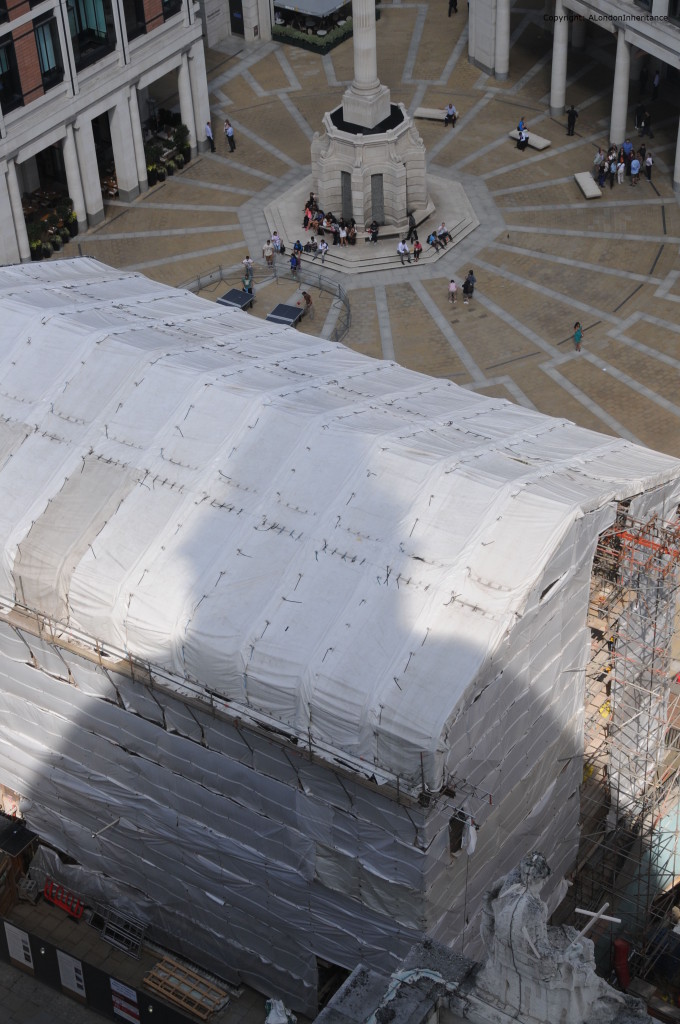 Now look up again and walk further to the left and out across to the west. In 1947 the Old Bailey with the “Lady of Justice” holding the sword and scales of justice stand well above the surrounding buildings, with the Senate House of the University of London the next tallest building in the distance. 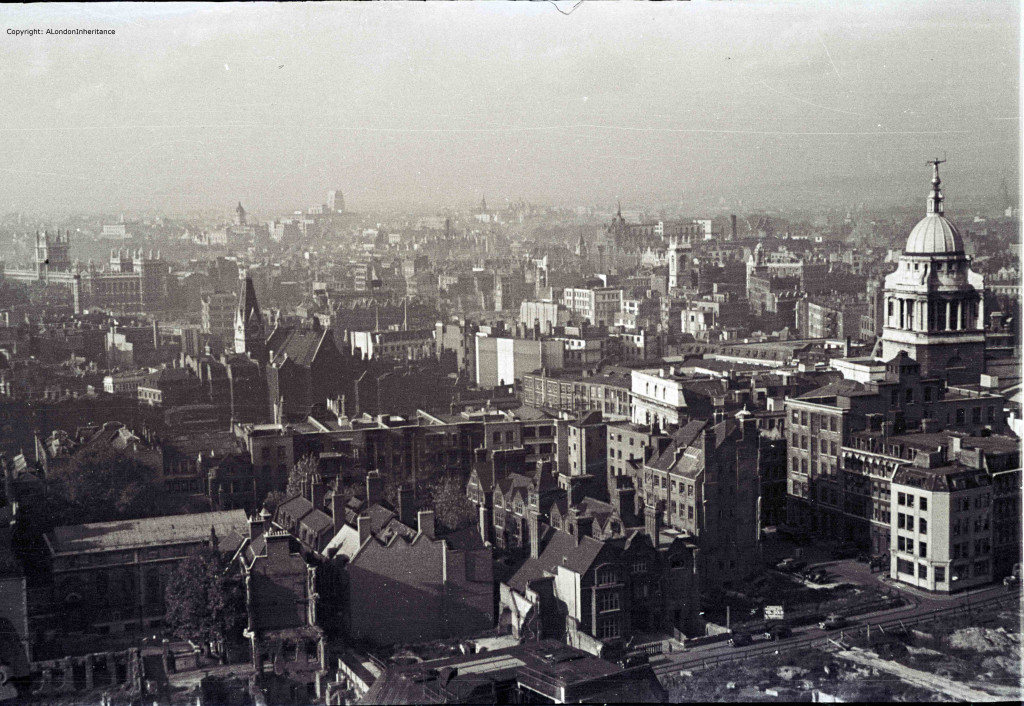 In 2014, the Old Bailey still stands clear but the rest of the view towards the west is very different. The view of the Senate House is now obscured, and the next tallest building on the horizon is the BT Tower. 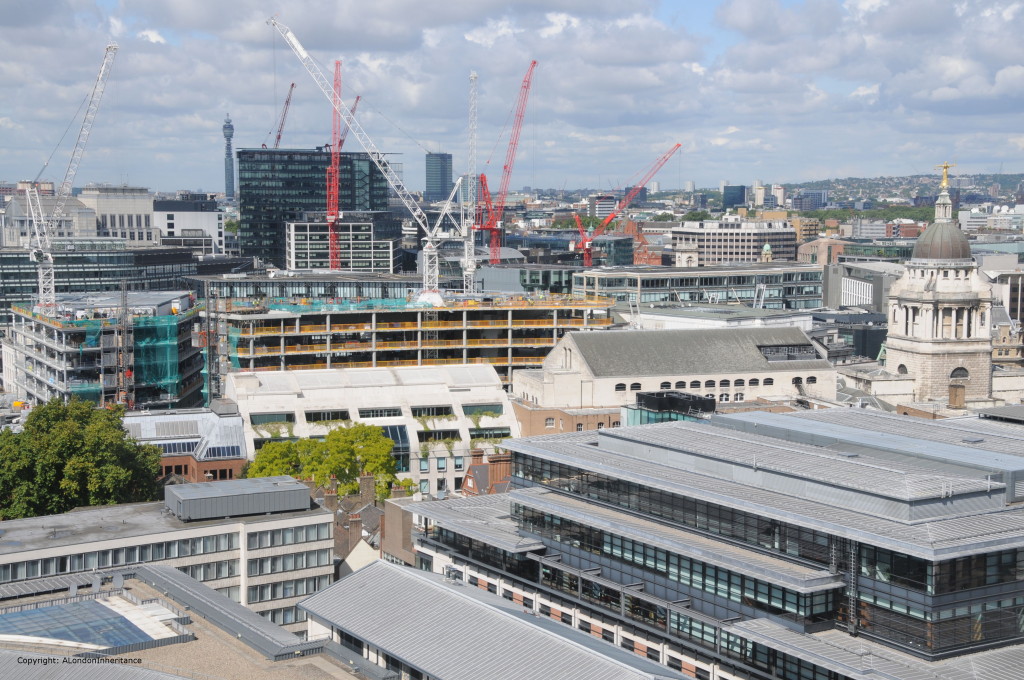 Turning to look further to the left, we can see one of the western towers at the front of St. Paul’s. 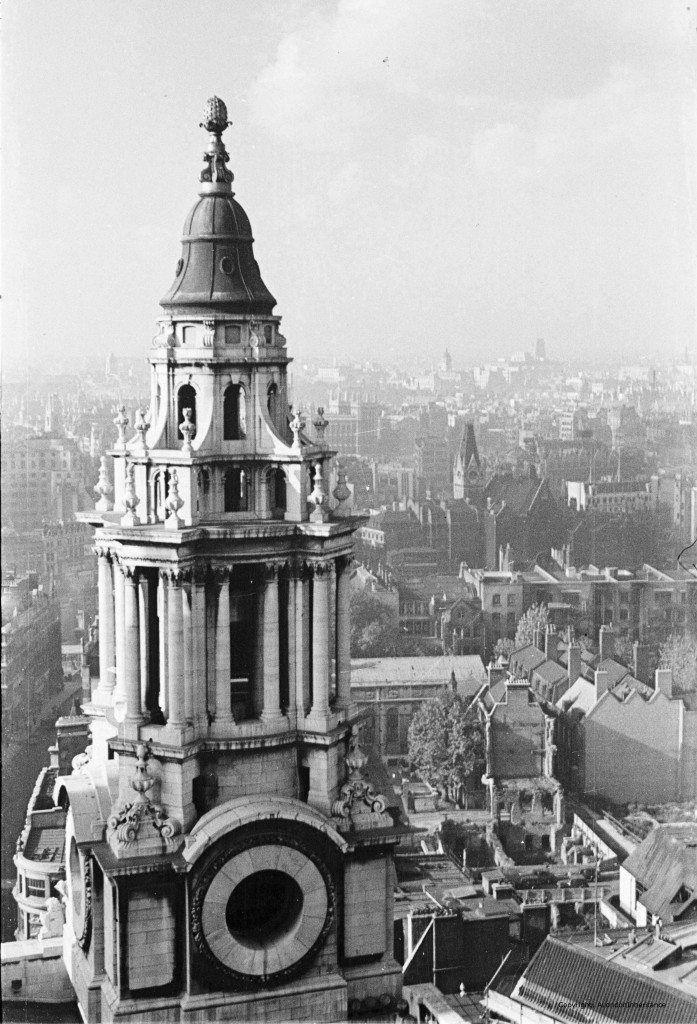 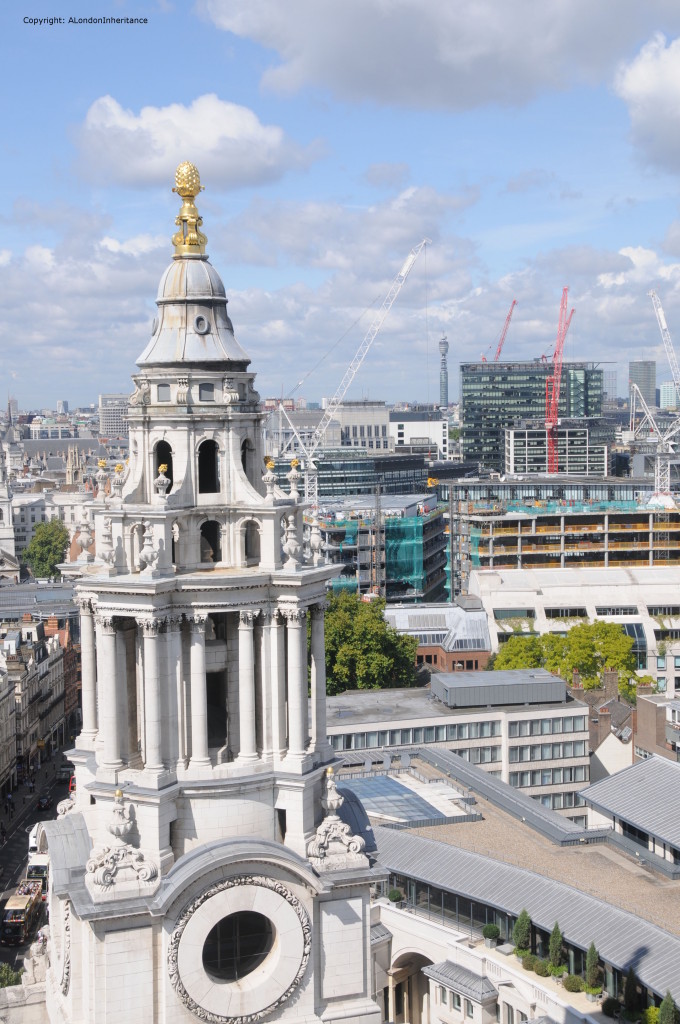 Looking at these towers at the front of St. Paul’s, at the Dome, across the different levels of roof across the cathedral, the many small walkways, along with the many stairways leading up to the heights of the cathedral really bring home the complexity of protecting the cathedral during the air raids of the blitz.

The Very Reverend W.R. Matthews, Dean of St. Paul’s wrote an account of St. Paul’s Cathedral in Wartime published in 1946. The following extract covering the 29th December 1940 brings to life the challenges that the Fire Watchers faced whilst protecting the cathedral. We join the account after the external water supplies have dried up:

“The Watch was now forced back on their reserves and had to rely entirely on stirrup pumps and sandbags. How we blessed the prescience of our commander, who had insisted on having our supplies of reserve water augmented in case of an emergency like that which we now confronted. Tanks, baths and pails full of water with their compliment of crowbars, shovels and other fire-fighting equipment were now liberally installed in all the vulnerable parts of the building and were so arranged that men approaching the scene of the fire from any direction would be certain of finding the necessary appliances to hand. But for these precautions there might well have been a different story to tell of the fate of St. Paul’s that night.

The action in the cathedral became for a while a number of separate battles in which small squads fought incipient fires at different places on and beneath the roofs. Some of the bombs were easily dealt with, as for example that one which fell on to the floor of the Library aisle and was extinguished by Mr Allen and myself. I have a special affection for the scar left by that bomb on the floor – it represents, I feel, my one little positive contribution to the defeat of Hitler ! But some of these battles were arduous and protracted. Bombs which lodged in the roof timber were very dangerous and hard to tackle. More than one of these took three-quarters of an hour before they were put out and had to be attacked by two squads, one from below and the other from above. The lower squad had the additional discomfort of being drenched by the pumps of their more elevated colleagues”.

The account also makes clear the need for a “head for heights” when working in the roof spaces and above the cathedral floor. It is the bravery of the Fire Watchers that we have to thank for the survival of the cathedral.

Now for the final view from the Stone Gallery in 1947 and we are looking out over the southerly of the western towers across the River Thames to Westminster. We can see Waterloo Bridge along with the Shot Tower on the south bank of the Thames. 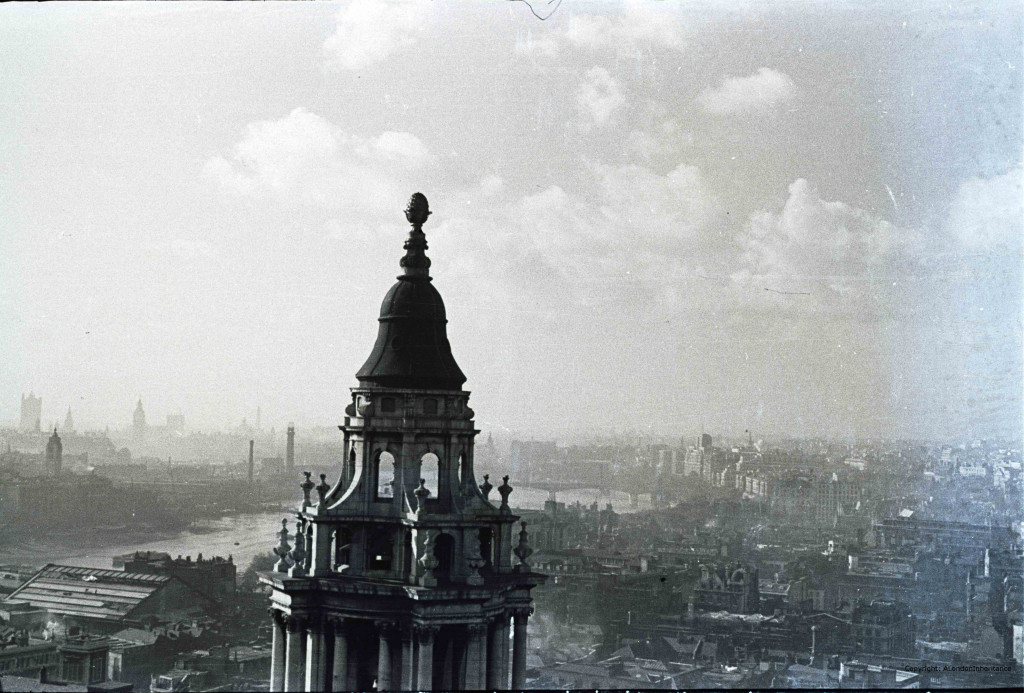 And in 2014, the view of the river and Waterloo Bridge remain but there has been considerable change on both banks of the river. In the 1947 photo, the south bank would soon be cleared for the Festival of Britain, after which the site was part occupied by the Shell Centre building then continuous development leading up to the London Eye.

In the foreground in the extreme lower left of the photos is St. Benets, Paul’s Wharf. 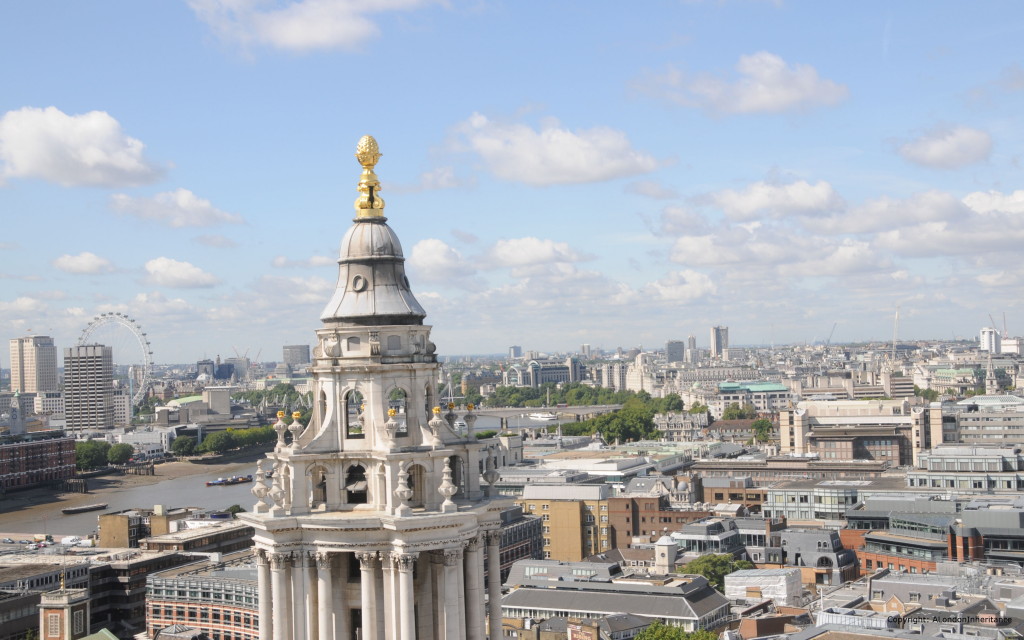 The following map from Bartholomew’s 1940 Reference Atlas of Greater London covers the area to the north of St. Paul’s and shows the streets between St. Paul’s Church Yard and Newgate Street. This was the area shown in the photos covering Paternoster Row and Square and shows the many small streets that were occupied by numerous businesses including that of Simpkin Marshall Ltd. These were soon to be lost with the rebuilding of the area over the coming decades. 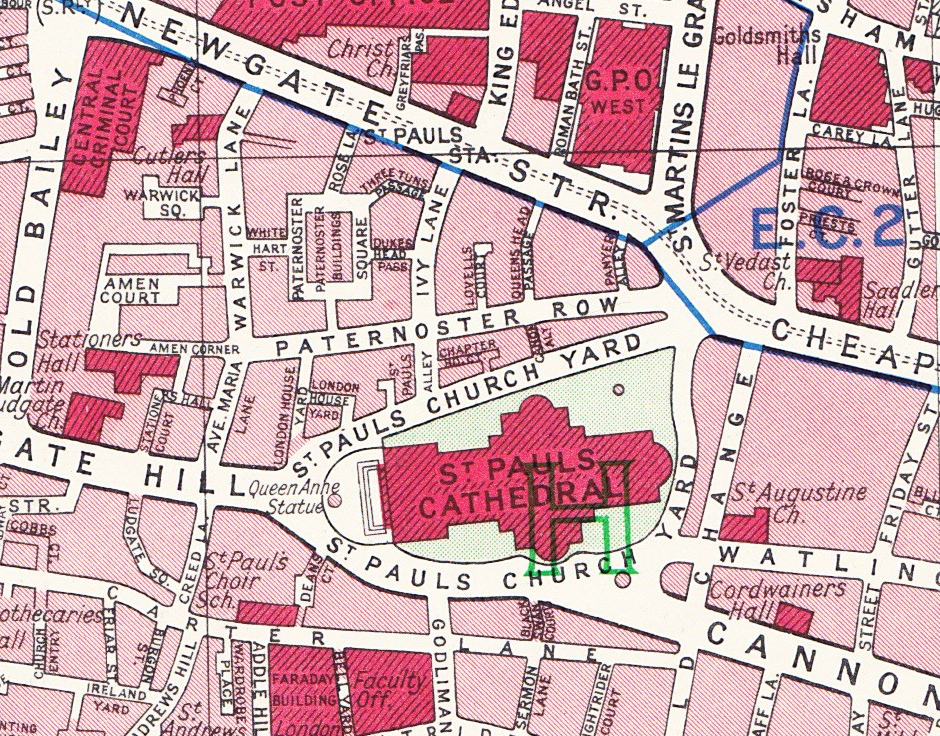 View Larger Map
That completes our walk around the Stone Gallery. The air raid of the 29th December 1940 destroyed a significant part of the surroundings of St. Paul’s and the area has since changed dramatically.

The air raids destroyed not only buildings but also business that had been operating for many years, not to mention the thousands of lives that were lost. That St. Paul’s remains is thanks to the bravery of those who protected the building as the area was covered by a deluge of bombs.

For Londoners, it must have seemed that their City was changing forever almost on a nightly basis.

The following photo is from the Imperial War Museum collection © IWM (D 6412) and was taken in January 1942 and perhaps typifies the atmosphere that must have pervaded many parts of the city. 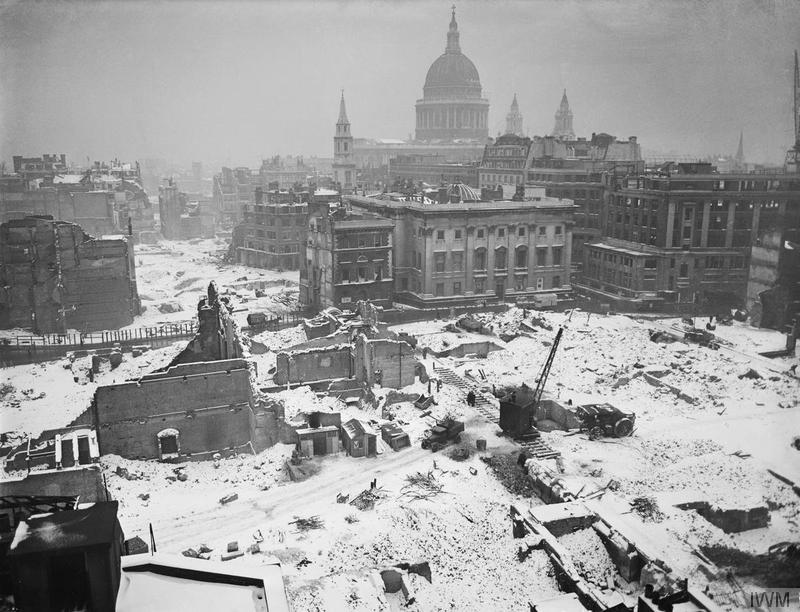 The Stone Gallery (and the higher Golden gallery) provide a perfect location to view the wide sweep of London, from Shooters Hill, to Alexandra Palace, the City, Westminster, North and South Bank. The last stone of the cathedral’s structure was laid in 1708 and since that time it has looked down on a City that has changed beyond all recognition and hopefully will continue to do so for many centuries to come.

16 thoughts on “Post War London from the Stone Gallery, St. Paul’s – The North and West”