There are some photos from my father’s collection that I was unsure of whether I could find the location where the photo was taken. This week’s post is a typical example of this type of photo, but also how such a simple photo leads into further investigation of the area where the photo was taken. This is what I wanted to get out of this journey, find the location of where all my father’s photos were taken and increase my knowledge of the history of London.

Two very similar photos taken in the late 1940s show a group of men working on the road at a road junction, with a Bank on the corner behind them. 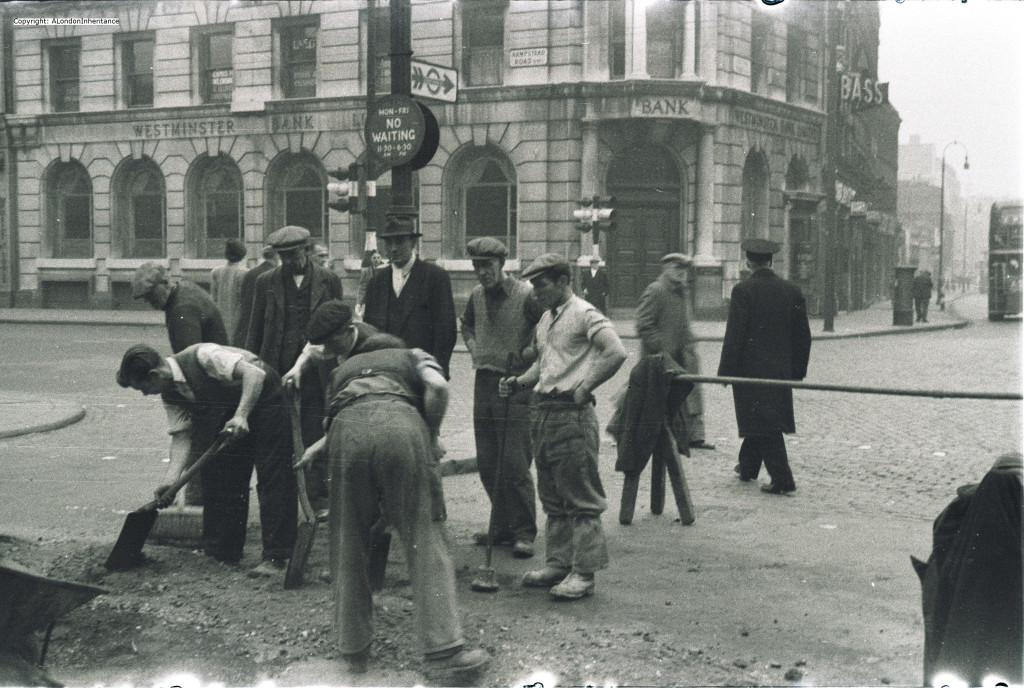 There was nothing really to identify the location, however on closer examination of the Bank, there is the street name of Hampstead Road. The name on the sign on the right of the Bank cannot be identified so I could not work out the road junction. The angle and the distance does not allow a name to be resolved. So I knew this was in Hampstead Road on a street corner, but where? I have walked Hampstead Road before and could find no location that fits these photos.

I have a number of sources to search, both written and online to try to find locations and I eventually found the location for this one following a search on the English Heritage website searching for a Bank in Hampstead Road. This resulted in a photo of the same bank, identifying the location as on the corner of Hampstead Road and Euston Road, so now I had the location with the photo being taken outside Warren Street underground station looking across the Euston Road to the Bank on the opposite corner.

There are still many original building on the south side of Euston Road with Warren Street underground station being one of these that has not changed, therefore the south side marks the original alignment of Euston Road. The north side has all been redeveloped with Euston Tower and the more recent Regent’s Place office buildings. My estimation of where the bank was located is therefore half way across the new road, just over the Euston Underpass.

There was one point that worried me in confirming the location of this photo, there is an Underground sign pointing east along Euston Road, I would have assumed that if this was outside Warren Street it would be pointing to the station, however a quick check confirmed that in the direction of the sign, a short walk along Euston Road is Euston Square underground station, so this sign was directing travellers emerging from the Northern line at Warren Street to the Circle, Hammersmith and Metropolitan lines at Euston Square.

The following is my 2014 photo from roughly the same position outside Warren Street underground station as the original. 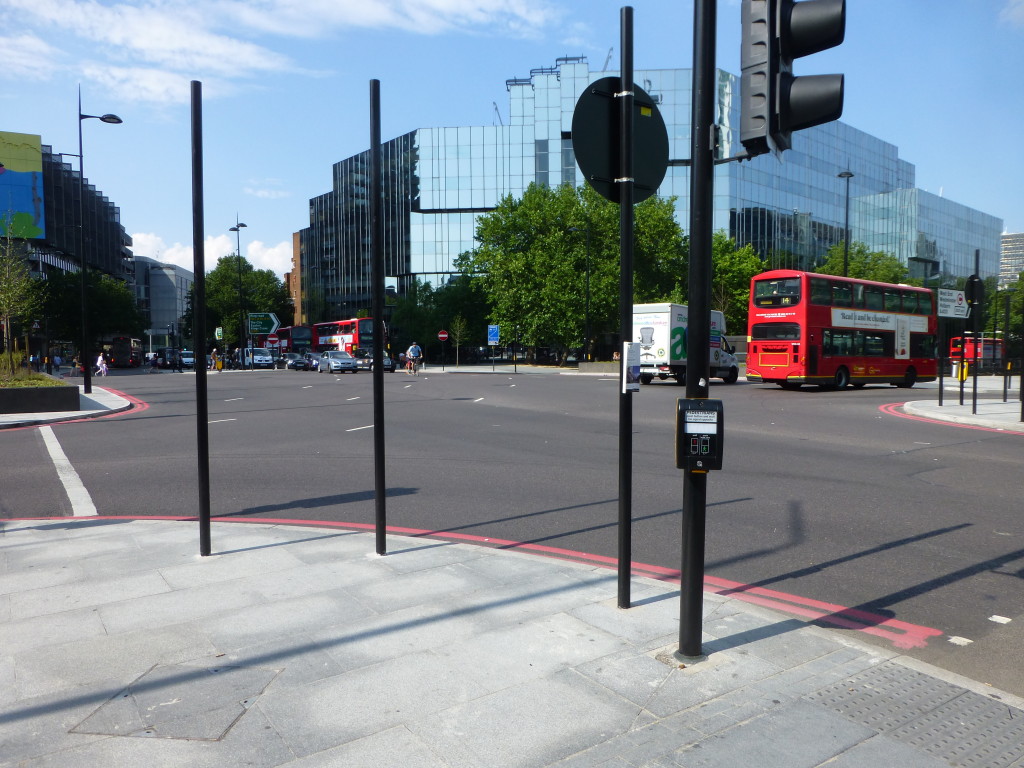 Very hard to be precise as there has been so much change since the original, and I suspect I should have been more on the current edge of Euston Road slightly to the left. If I have worked out the original road widths correctly then the corner of the Bank in the original photo is roughly where the white truck is in the 2014 photo.

Despite the appearance of this road junction and the surrounding areas, as with anywhere in London there is a considerable amount of hidden history to be discovered.

The following map is from the 1940 edition of Bartholomew’s Reference Atlas of Greater London with the red oval covering the area of today’s post. The junction of Tottenham Court Road, Hampstead Road and Euston Road is under the “J” in the centre of the oval. Warren Street station can just be seen and the photo was taken outside looking diagonally across Euston Road. 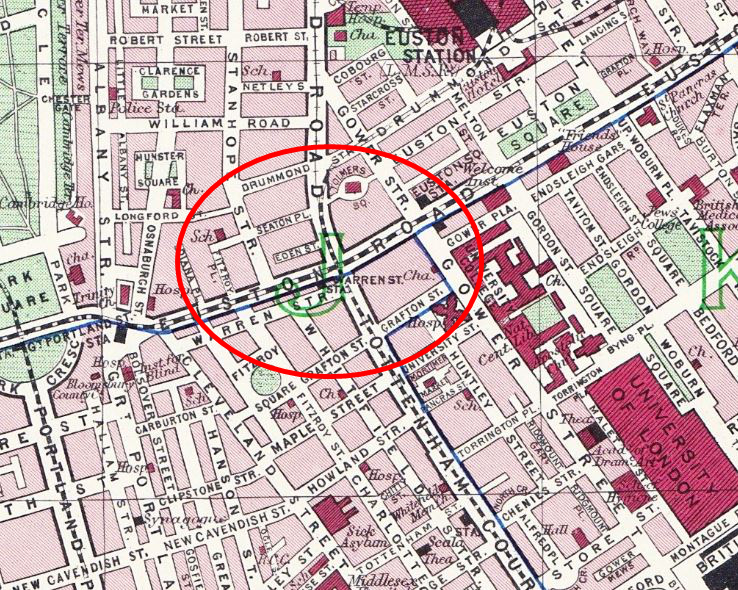 If we cross the Euston Road from Warren Street to the north side we find Euston Tower and the Regent’s Place development. This has completely obliterated Eden Street, Seaton Place, Fitzroy Place, indeed this whole area bounded by Drummond Street and Osnaburgh Street.

It was on this corner of Hampstead Road where the Adam and Eve Tavern was located. The location now is probably exactly where the underpass dives under the Hampstead Road, Tottenham Court Road junction. This was built on the original site of the Tottenham Court from which Tottenham Court Road takes its name. The manor was converted to the original Adam and Eve somewhere around 1645. Up until the later part of the 18th century the tavern and extensive gardens were very popular with Londoners. In the road outside the Adam and Eve, Hogarth set the scene for his “March to Finchley” where a military camp had been set-up and the picture shows the disorderly Guards in true Hogarth style on their way to the Finchley Camp as part of the journey to Scotland to meet the Jacobite Pretender (Charles Stuart).

The March to Finchley is shown below: 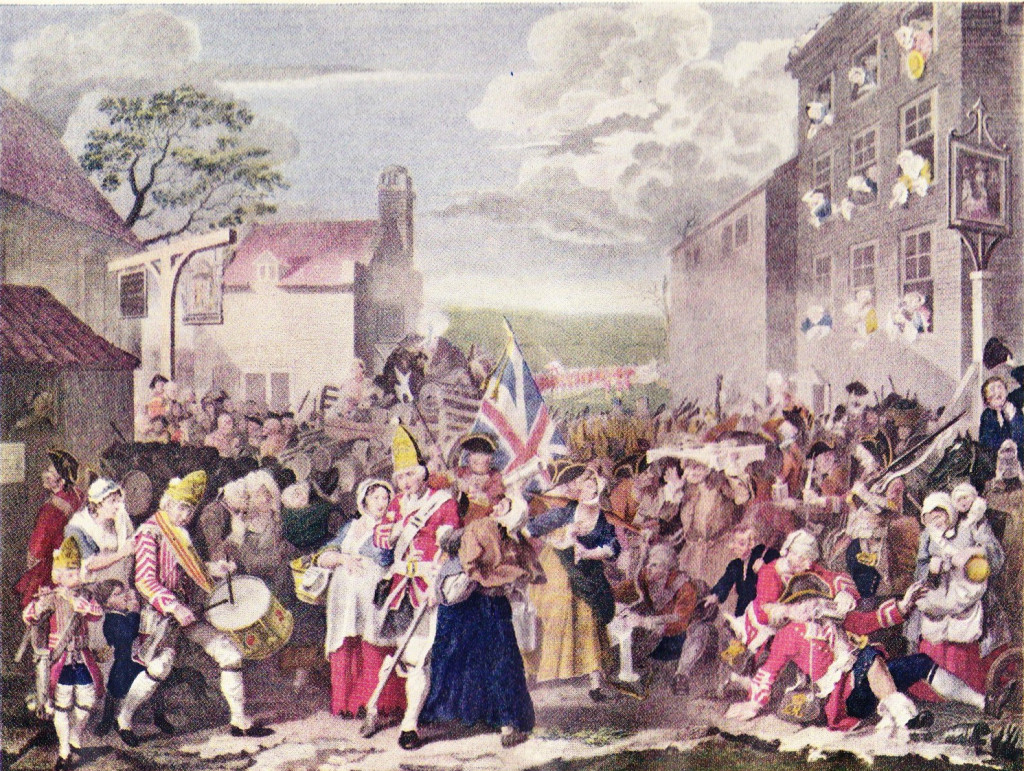 The Hogarth picture shows two Taverns with the Adam and Eve on the left and the Old Kings Head is on the right. Strange to think that the Euston Underpass is now running left to right across this picture. The King’s Head was demolished in 1906 to make way for the widening of the Hampstead Road. The very narrow road width of the junction at this point had long been a problem as the King’s Head jutted out into the thoroughfare and calls had been made to address this from the start of the nineteenth century.

Also, when the Adam and Eve and Kings Head were at the peak of their popularity, much of this area was countrified and to demonstrate the rural nature of the area, the following advert appeared in The Postman for December 30th 1708 of a house to be let:

“at Tottenham Court, near St. Gile’s and within less than a mile of London, a very good Farm House, with outhouses and above seventy acres of extraordinary good pastures and meadows with all conveniences for a cowman, are, to be let, together or in parcels, and there is dung ready to lay in”

I took the following photo on the east side of Tottenham Court Road looking over towards Euston Tower and Regent’s Place. The Adam and Eve Tavern was roughly where the red traffic lights are now located with Eden Street just in front of Euston Tower. 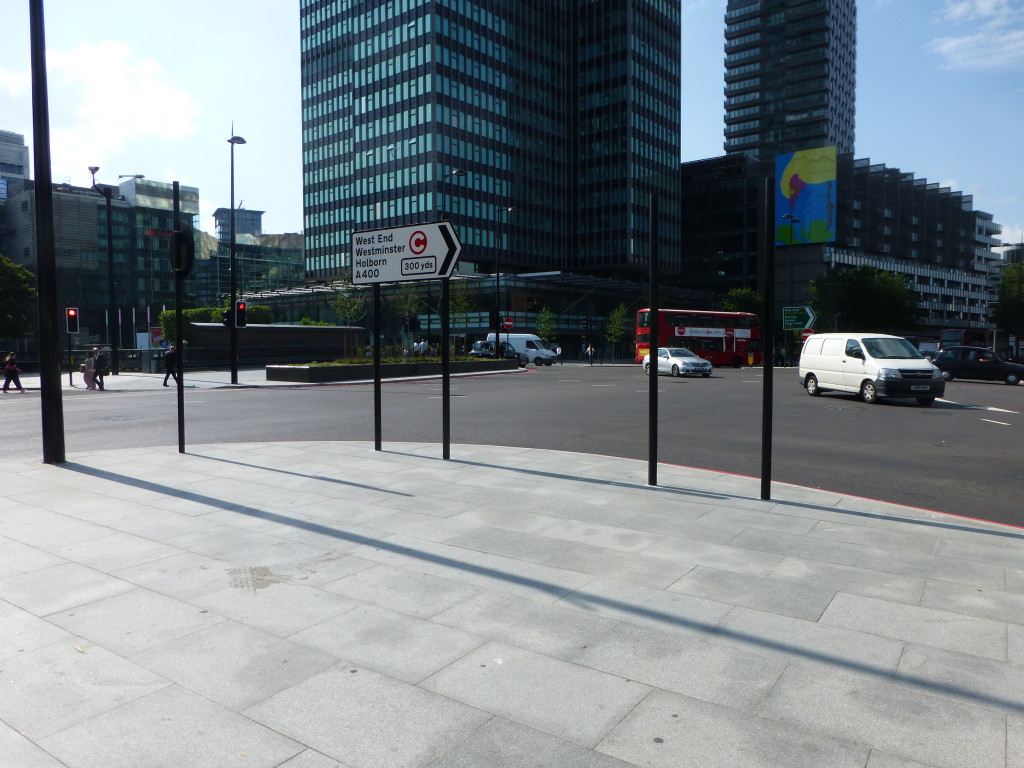 The following photo is the second of the same scene. It is fascinating to compare working conditions of the late 1940s with those of today. Not a single high visibility jacket or traffic cone in sight. 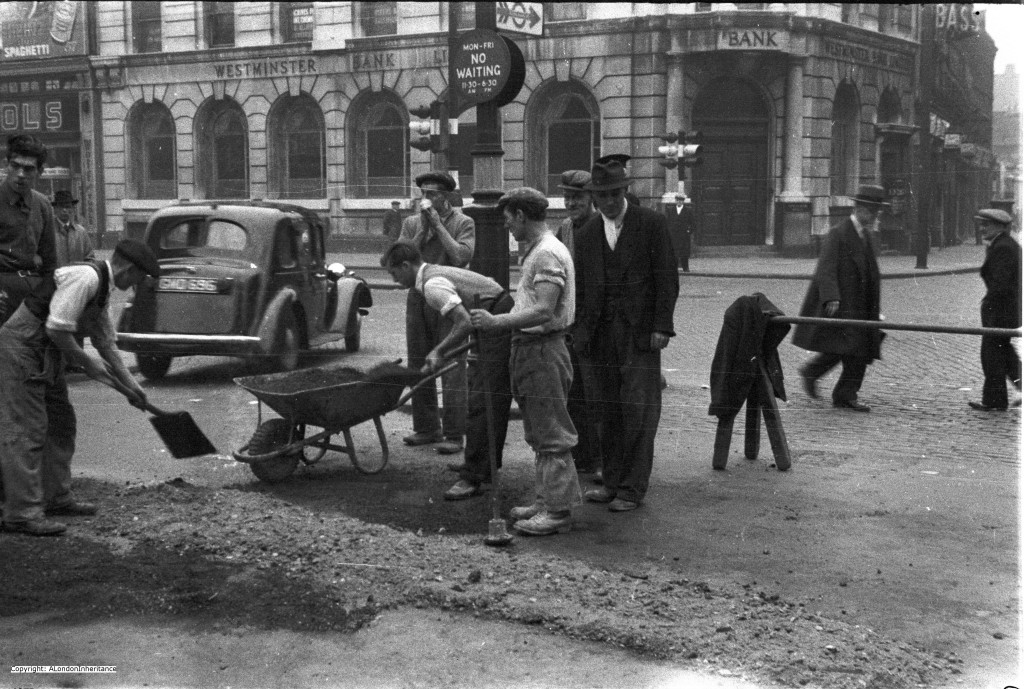 The first photo, taken in 1961, is looking east along Euston Road. The bank on the left of the photo is the same as the one in my father’s photo, however this now shows the full view of the road. 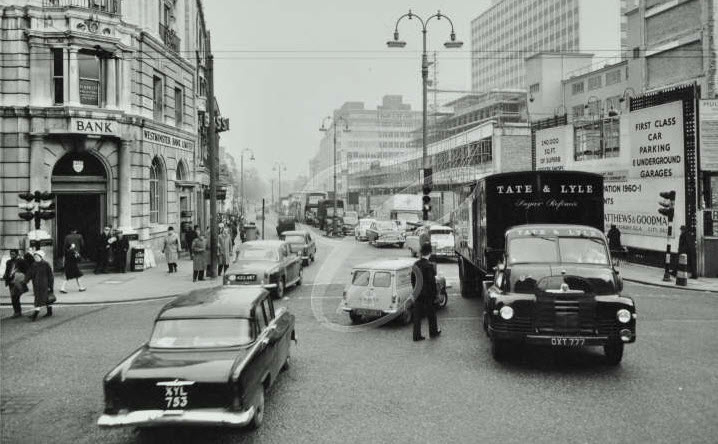 The next photo, also taken in 1961 is looking west along Euston Road. Warren Street Underground Station is on the left and this is basically the same today, however the very significant change is to the right of the photo. The pub on the corner is the Adam and Eve. All the buildings on the right of this photo were pulled down in order to make way for the widening of the Euston Road and the Euston Underpass. Where the buildings on the right, facing the camera stood, is now the underpass and a bridge over the underpass leading to the north side of Euston Road. 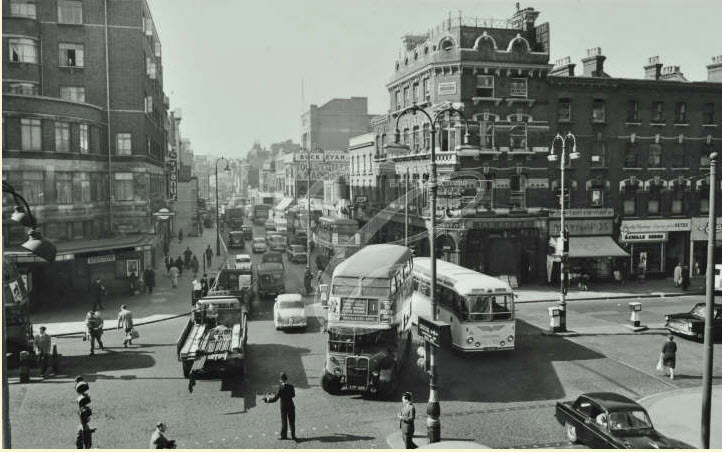 I have repeated one of my photos from earlier in the post. This is looking across to where the pub and the buildings running to the right in the photo above used to stand.

Now we come to the building of the Underpass. These photos were taken in 1966 and this is looking across to Warren Street Underground station, the curved building to the left of the photo. The pub and buildings in the early photos ran across to the right, where the hoarding can be seen, but have now been pulled down and the Underpass is being built. 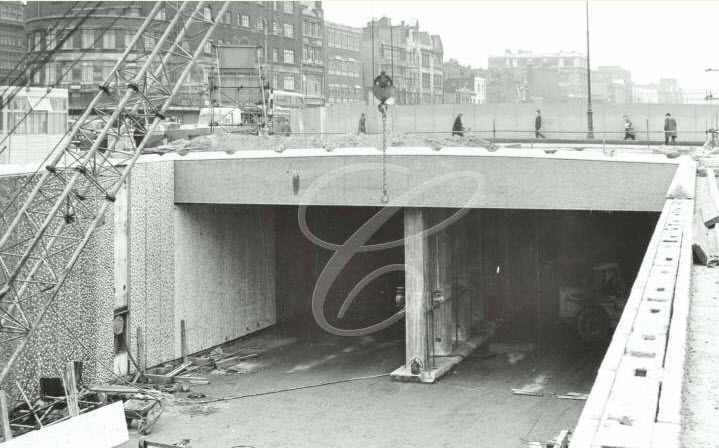 And looking in an easterly direction, the Underpass is where the bank used to stand, which would have been roughly left of centre, slightly set back from where the Underpass goes under the road. 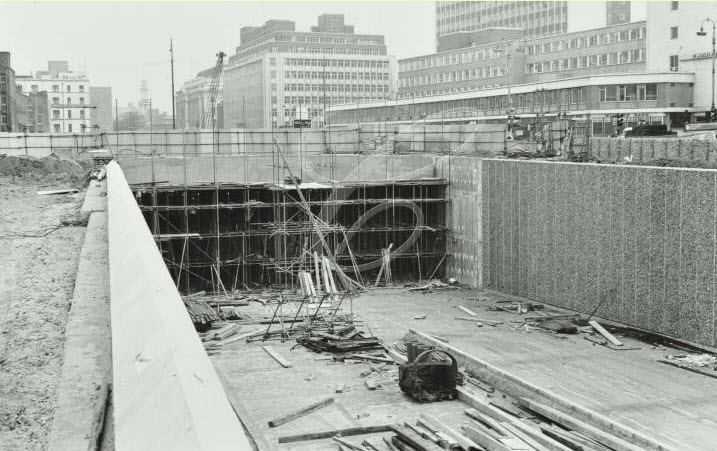 One final photo which again is from 1961 and is looking to the west. The lorry is from the company G.E.C. the engineering and electrical conglomerate that failed so spectacularly after trying to turn itself into an internet / communications business at the height of the dot-com bubble. Interesting not only how the urban landscape changes, but also the businesses operating in that landscape. 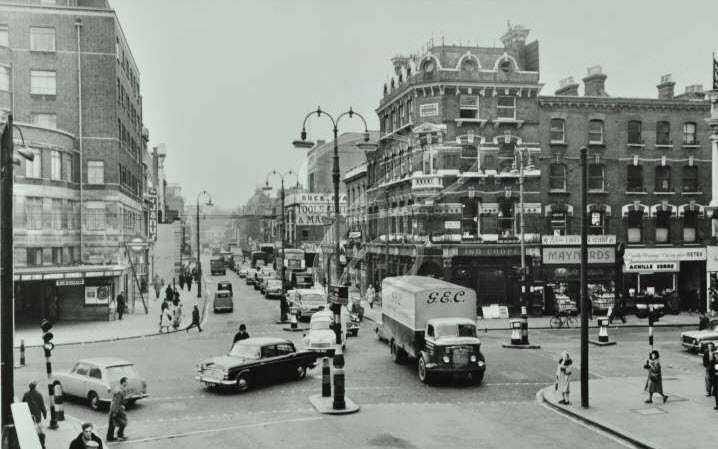 An amazing series of photos and I am very grateful to John for sending and letting me include in the post as they complete the story of how this road junction has changed so considerably.

So, one simple road junction in London, but as with most places across London, a fascinating history.