Shell Centre is an office complex on the Southbank, located between Hungerford Bridge and the old London County Council building. The most obvious part of the complex is the 26 storey tower.

Designed by Sir Howard Robertson and built between 1957 and 1962 for the Royal Dutch Shell group of oil companies, the office complex set new standards for staff facilities and building automation. Originally two main blocks, one either side of Hungerford Bridge, the “downstream” building to the east of Hungerford Bridge was sold during the 1990’s and converted to apartments.

Although large buildings above ground, there is a significant part of the complex below ground with a large swimming pool, theatre and bar being among the facilities for the original 5,000 staff to enjoy. Two underground tunnels connected the upstream and downstream buildings, running underneath the rail arches leading to Hungerford Bridge and being just above the underground train tunnels running north from Waterloo.

The building also had a tunnel out to the Thames so that river water could be used for cooling.

The “upstream” building to the west of Hungerford Bridge has a “U” shape set of 10 storey offices with the 26 storey, 351 foot tower block being the most obvious feature of the complex.

Shell has temporarily moved out of the complex and there is a proposed redevelopment of the site that will significantly change this part of the Southbank, more on this at the end of this post.

Long before the Shard and the Sky Garden at 20 Fenchurch Street, one of the innovations for the time was that the tower had a public viewing gallery. This was when there were very few tall buildings across London and certainly nothing built or planned in this part of the city. The viewing gallery provided almost continuous all round views of London.

The viewing gallery closed not that long after opening. I was told this was because that sadly there had been a suicide (although I have no verification of this). I was able to visit the viewing gallery in 1980 and took the following photos which show a very different London skyline to that of today. It always surprises me that it was not that long ago that there were very few tall buildings across London.

We will start with the view across to the Houses of Parliament and walk round the viewing gallery.

This was long before the construction of the London Eye which would now be the main feature of this view: 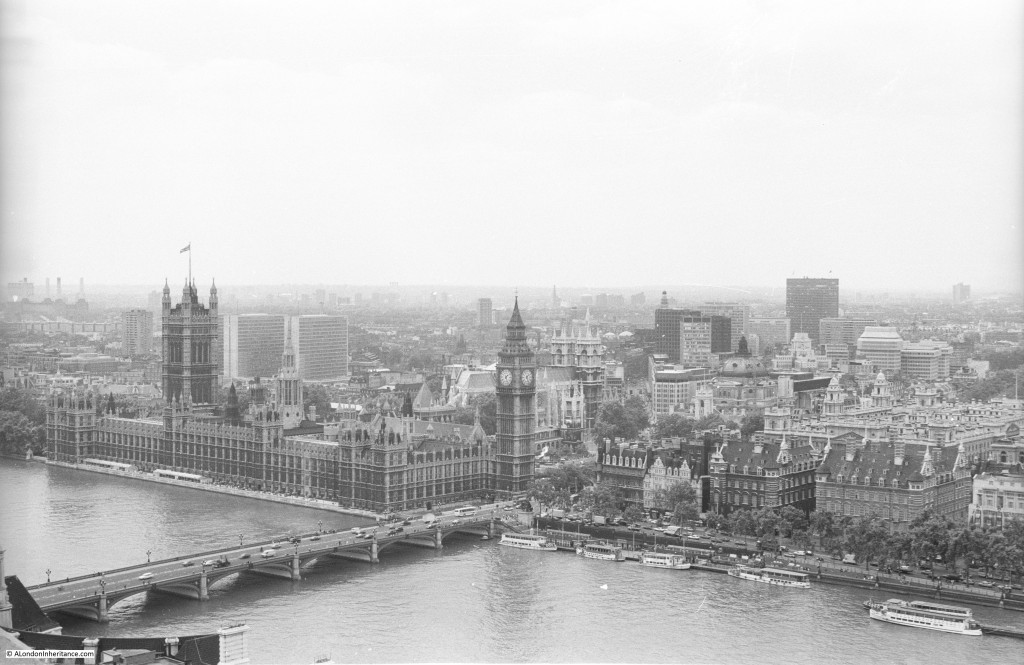 Moving further to the right we can look straight across the river. The large building to the right are the offices of the Ministry of Defence. Buckingham Palace is to the left of centre: 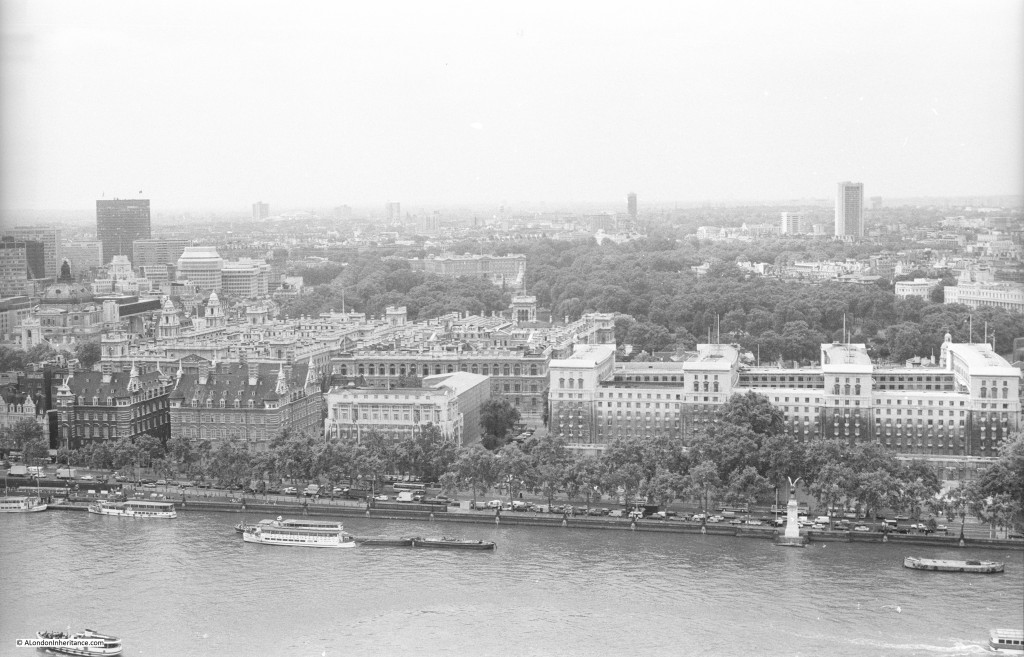 And further to the right, this is the original Charing Cross Station at the end of Hungerford Railway Bridge. In the years after this photo was taken, in common with many other main London stations, office buildings were constructed on top of the station. This was also before the Golden Jubilee foot bridges were added to either side of Hungerford Railway Bridge. At the time the photo was taken there was a single, relatively narrow foot bridge on the east side of the bridge. 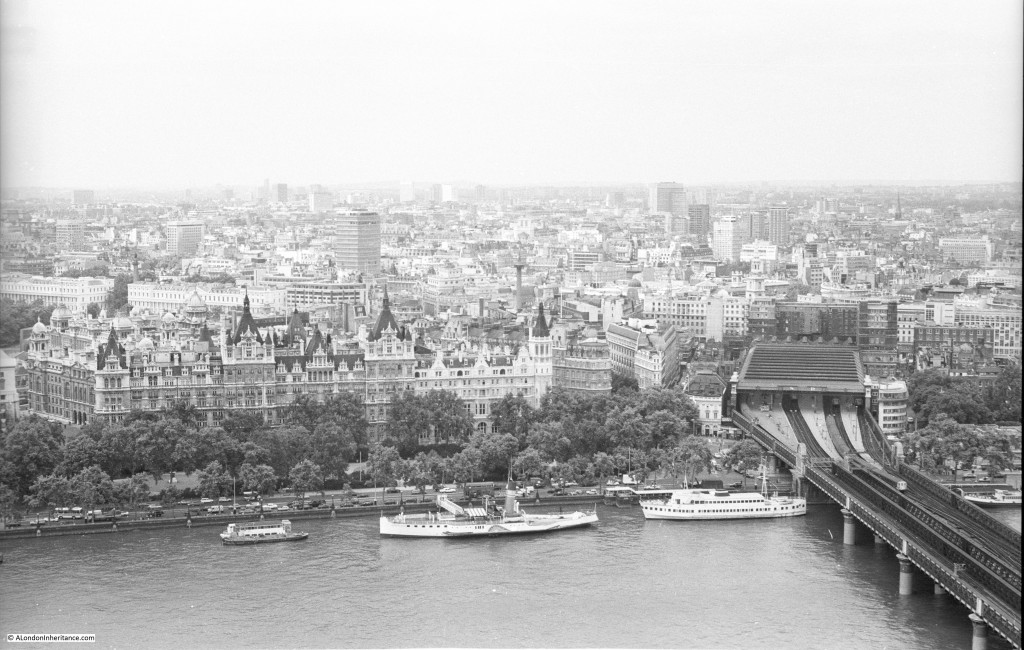 Looking directly onto Charing Cross Station with the Post Office Tower in the background and Centre Point to the right: 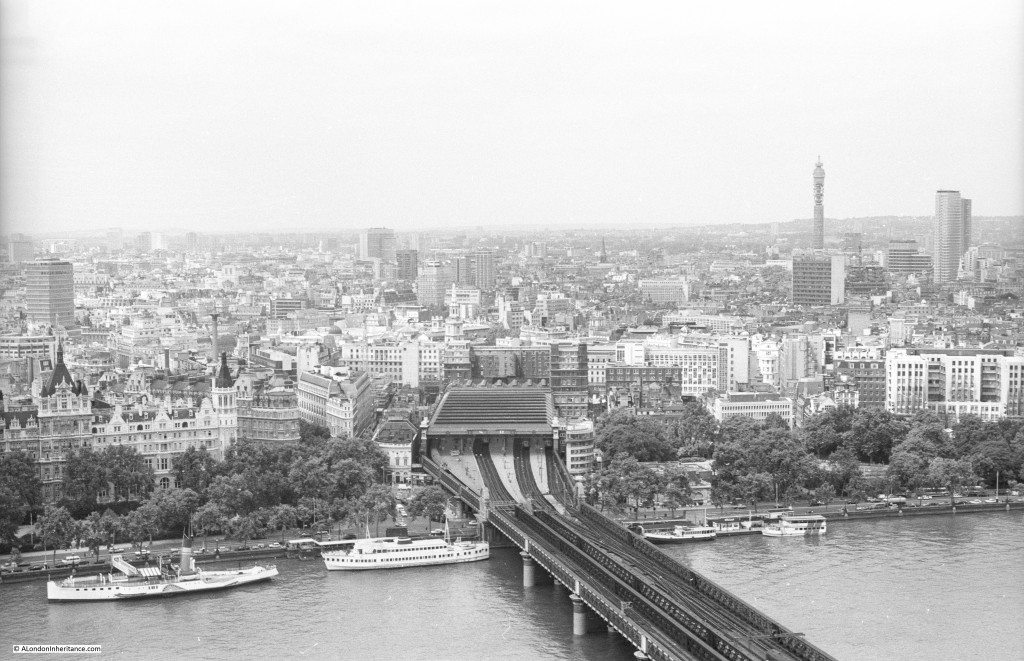 Further to the right, the building left of centre is Shell-Mex House. This was occupied by the UK operating company of Shell. To the right is Waterloo Bridge. 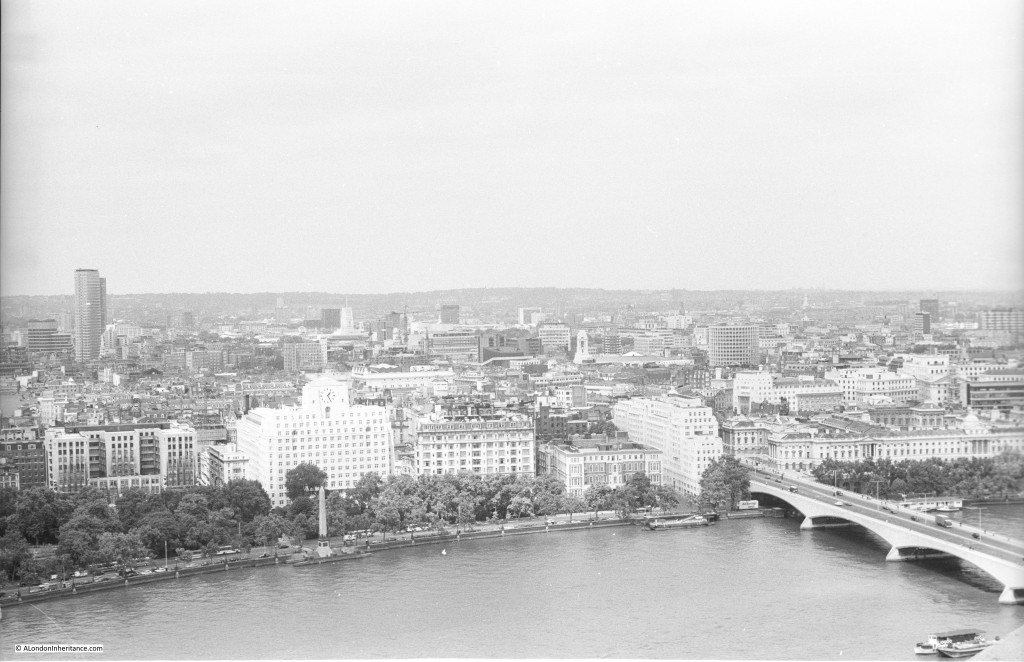 And further to the right with the full width of Waterloo Bridge: 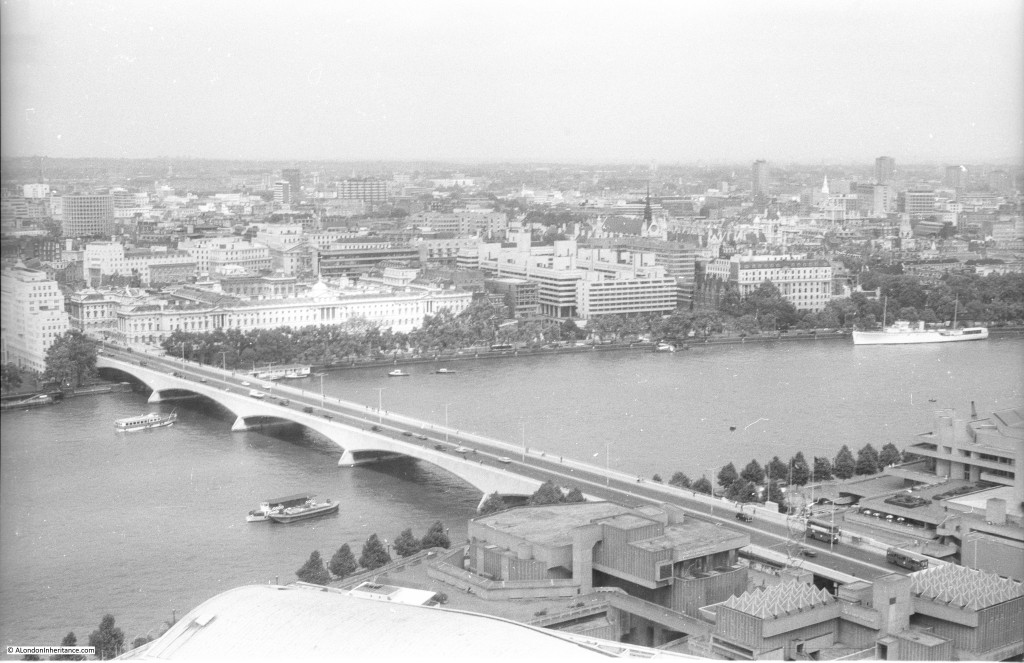 We are now starting to look over towards the City of London, St. Paul’s Cathedral can be seen to the upper right of centre and the three towers of the Barbican to the left.

The L shaped building in the lower foreground is the downstream building of the Shell Centre complex, and just above this building is the tower that was for London Weekend Television. The base of this tower still consists of TV studios, one of the few buildings that have had the same function over the last 35 years.

To the right of this is Kings Reach Tower, occupied at the time by IPC Magazines, publishers of magazines ranging from Loaded to Country Life. IPC Magazines vacated this tower block some years ago and it is now in the process of being converted into, yes you have probably guessed, more apartments. The height of the building is being raised with additional floors being constructed in top. 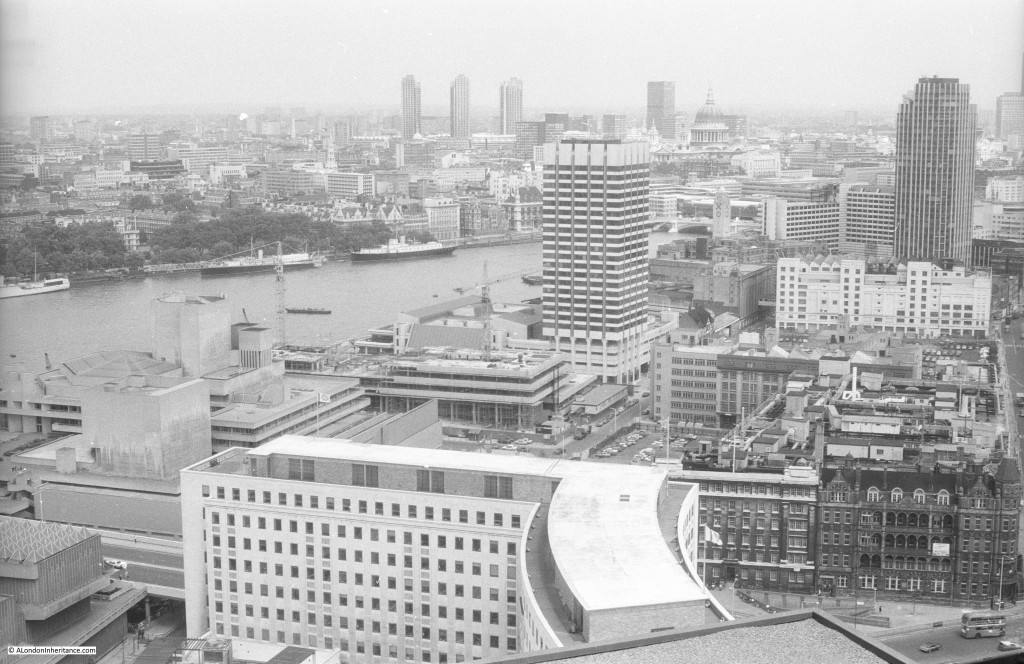 And slightly further to the right, the tower in the distance was at the time the tallest office block in the City of London, the recently completed NatWest Tower, built for the NatWest Bank, now renamed as Tower 42. 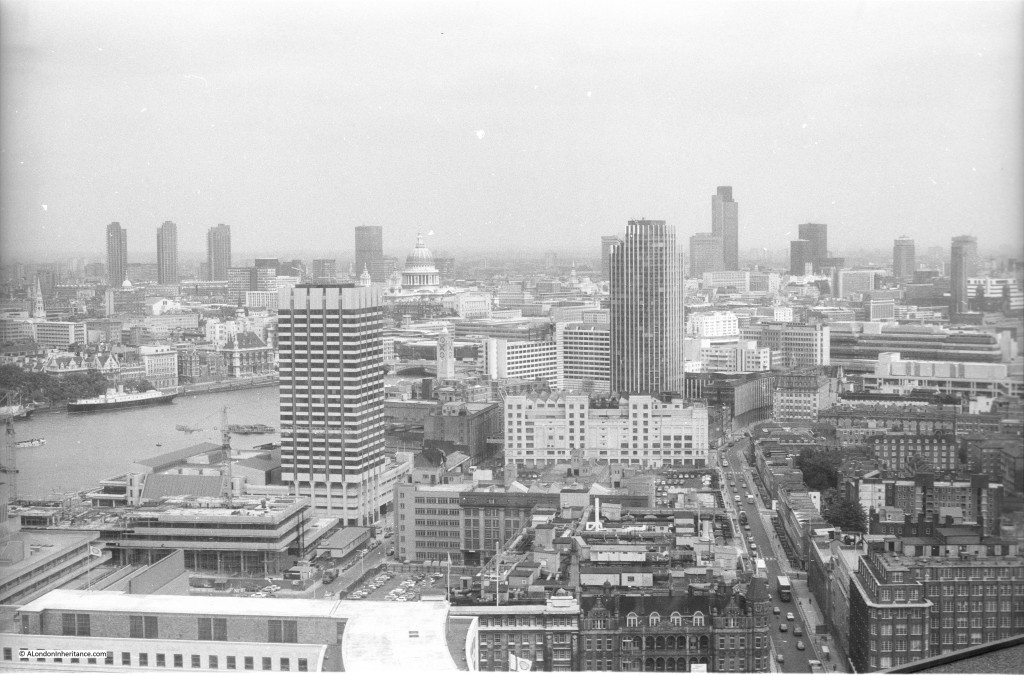 This photo is looking down onto the roundabout at the southern end of Waterloo Bridge. The large space in the centre of the roundabout is now occupied by an IMAX Cinema. The church to the right is St. John’s, Waterloo. The church was built between 1822 and 1824 and due to the marshy land had to be built on piles.  I was told at the time that one of the reasons for so much space below ground level at Shell Centre was also due to the marshy ground and the need to keep the overall weight on the site equal. Excavating below ground level to remove sufficient weight of earth equal to the weight of building on top. No idea if this is true, but it does seem plausible. 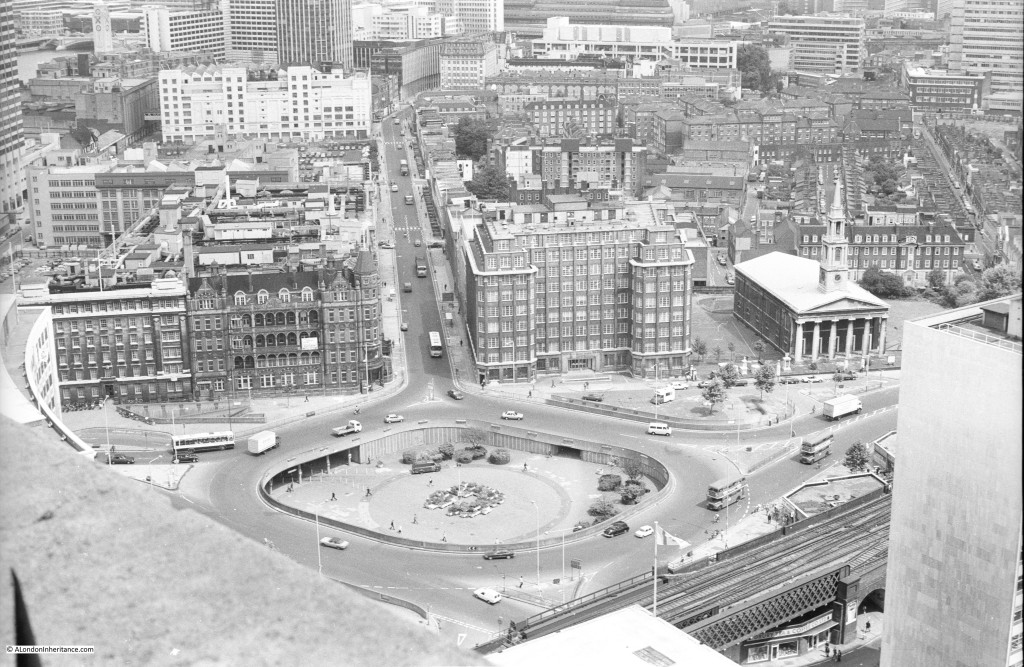 This photo is looking straight across to the City and Southwark. There is nothing of any height in the far distance. The buildings of Canary Wharf would now be very visible in the distance. 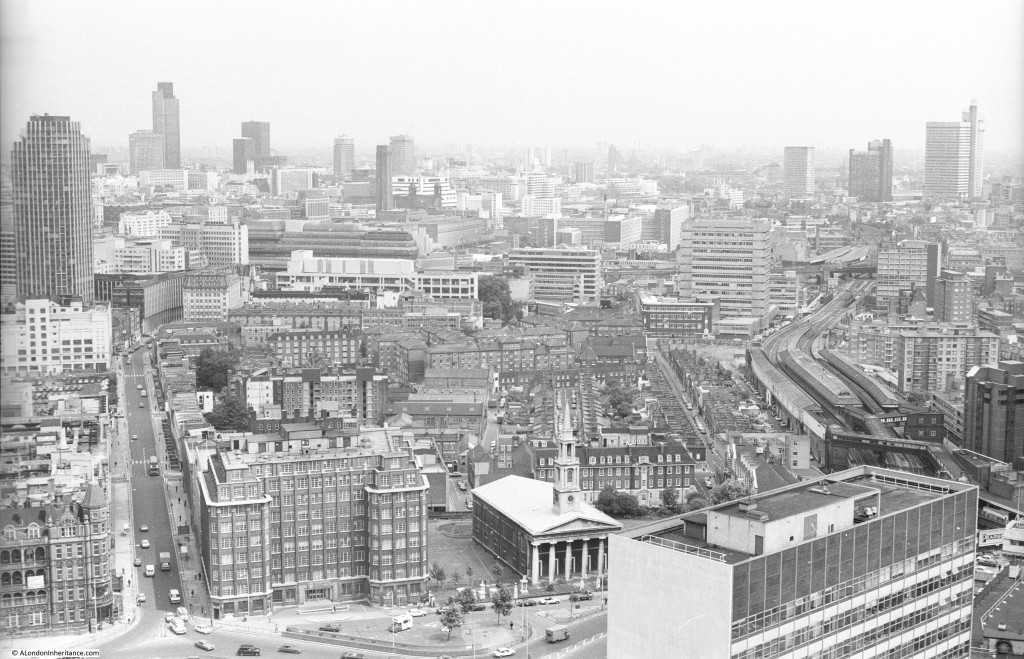 Continuing to move to the right, this is looking over south-east London with the roof of Waterloo Station occupying the bottom right corner of the photo. 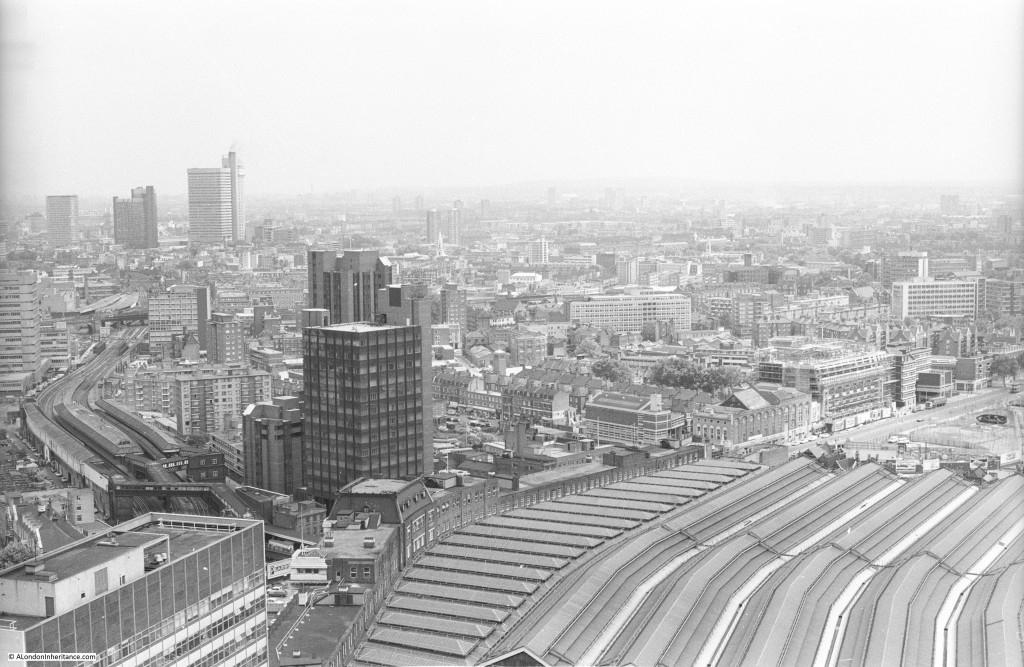 And round to the right again looking over south London with the extensive network of tracks leading into Waterloo Station. The lower section of tracks at the bottom part of the photo would soon be converted to the London terminus of Eurostar prior to the completion of the HS1 rail route which transferred Eurostar trains into St. Pancras. 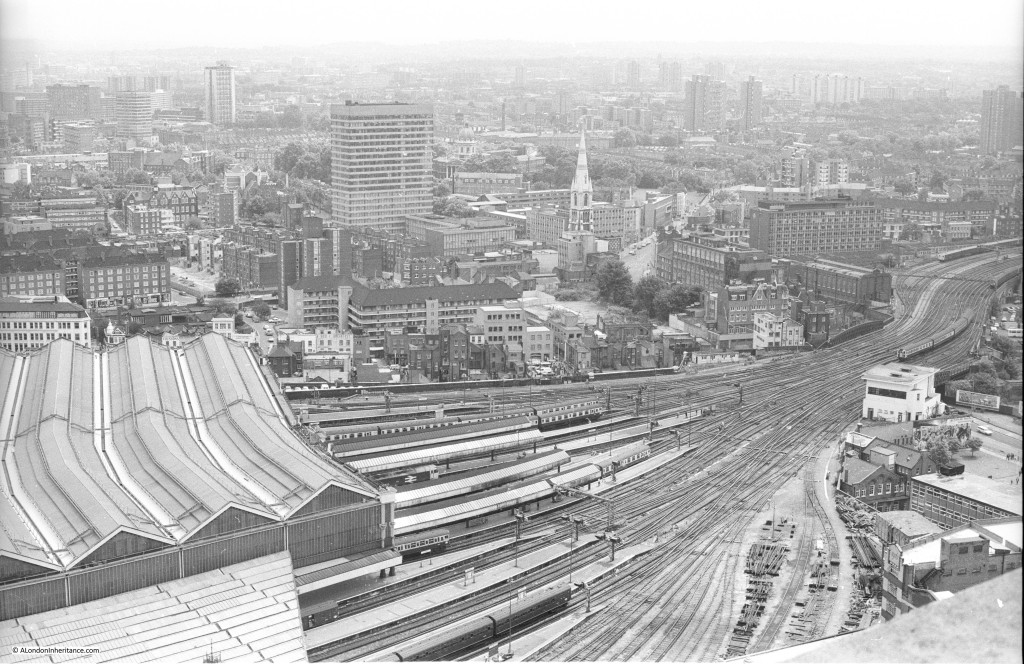 Detail from the above photo showing British Rail rolling stock prior to privatisation of the rail network:

And a final view over to south west London. This was as far as the viewing gallery would allow, the gallery did not run along the western side of the tower: 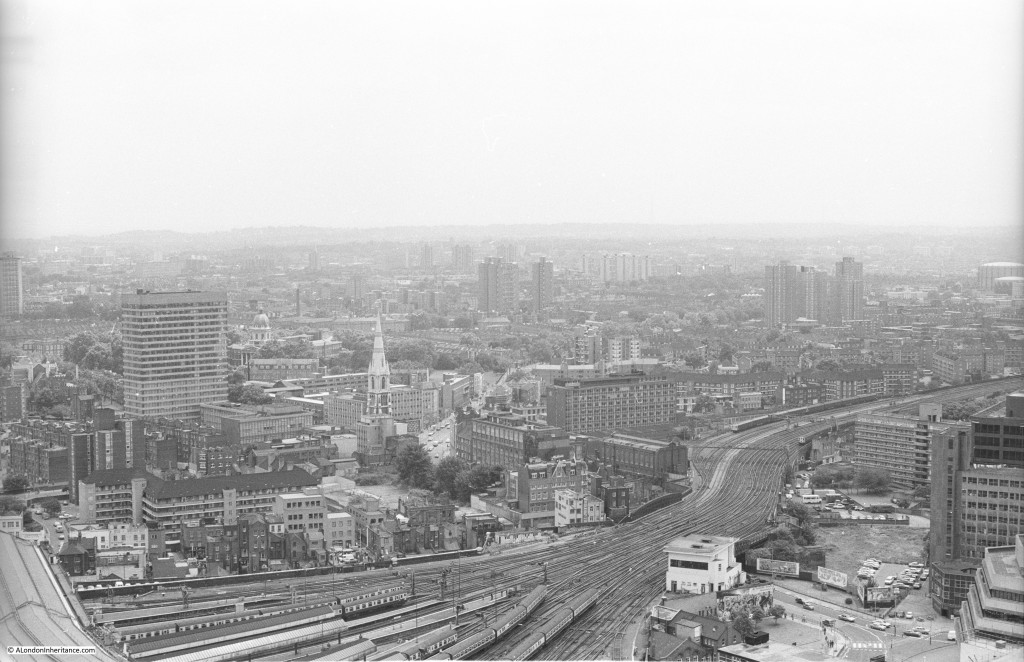 I cannot remember why I was using Black and White film when I took these photos from the viewing gallery. Shortly after taking the above, I took the following photo in colour showing Shell Centre from the north bank of the Thames. The north facing part of the viewing gallery can be clearly seen at the very top. 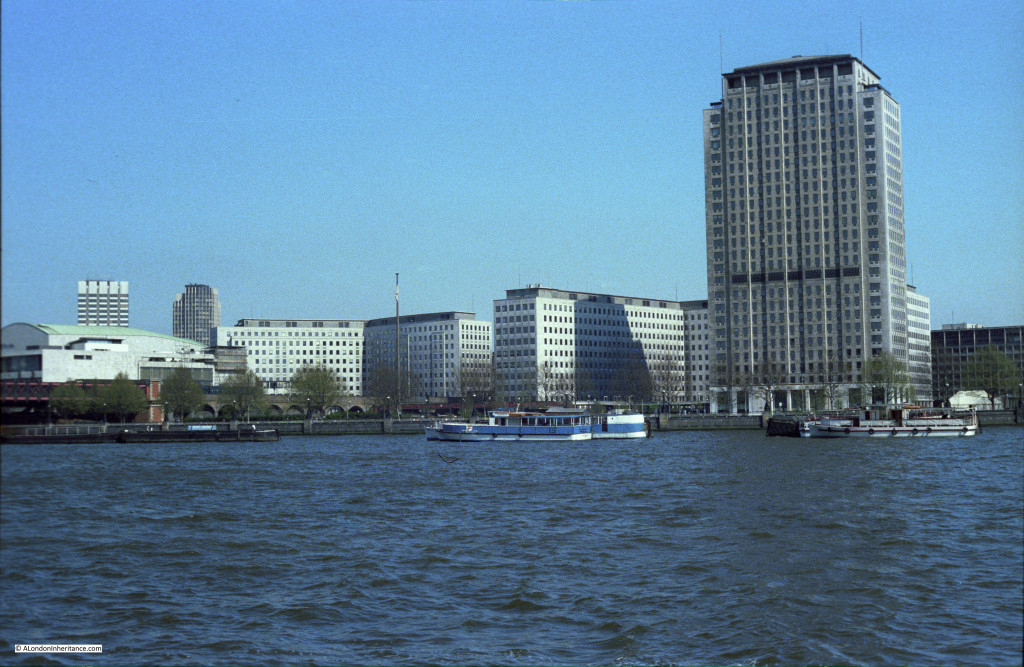 The building is one of the few immediate post war developments that works well. If the proposed redevelopment of the site gets approval, it will be very different. The plans propose the demolition of the “U” shaped 10 storey office block at the base of the tower, and a whole new cluster of towers built around the original tower.

It was quite a surprise to see how much this area will change, and in my view, the close proximity of towers of very different materials and design to the original tower just does not look right.

It was fascinating to look back on these photos of the London skyline from 1980. It looks very different now, and the almost continuous development of tower blocks look set to continue transforming the skyline for many years to come, although unlike the original Shell Centre complex, with almost identical glass and steel towers that are removing so much of the local character of London.

22 thoughts on “A Walk Round The Shell Centre Viewing Gallery”