As long-term readers of the blog will know, as well as photographing London, my father also took many photos across the country, on National Service and whilst cycling the country and staying at Youth Hostels. For this week’s post, I am visiting a site photographed in 1947. Tintern Abbey in South Wales. I returned in August of this year on a hot sunny day, when a clear blue sky emphasised the beauty of this part of the country, that runs along the valley of the River Wye.

It seemed the right time for the post, on the weekend with the shortest day of the year and the winter solstice, to remember and look forward again to long, sunny summer days.

This was the 1947 view, approaching Tintern Abbey on the road from Chepstow: 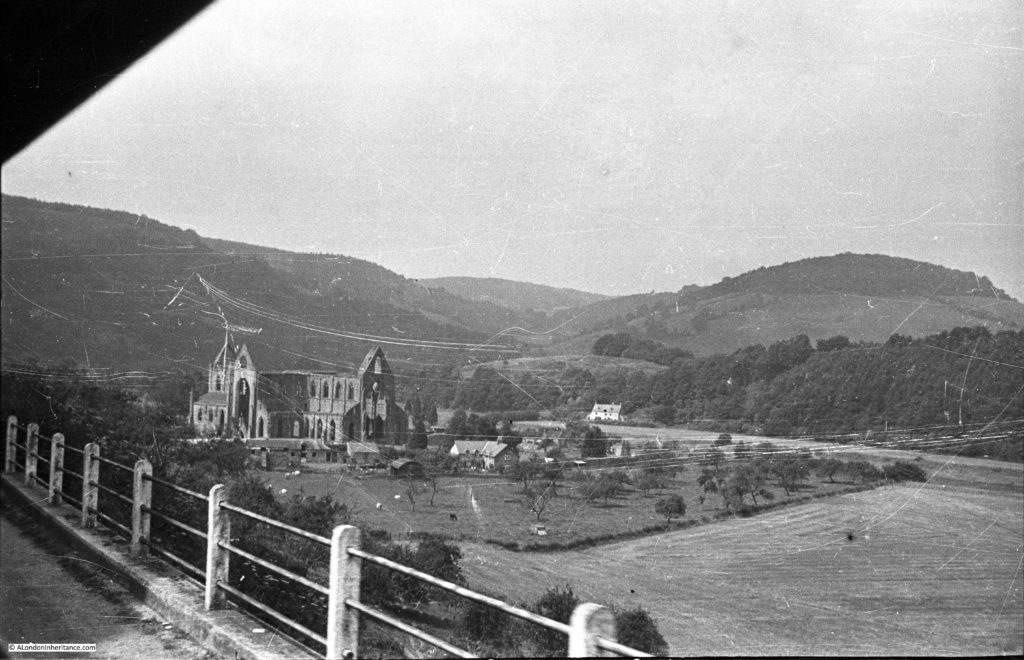 A closer view of the abbey: 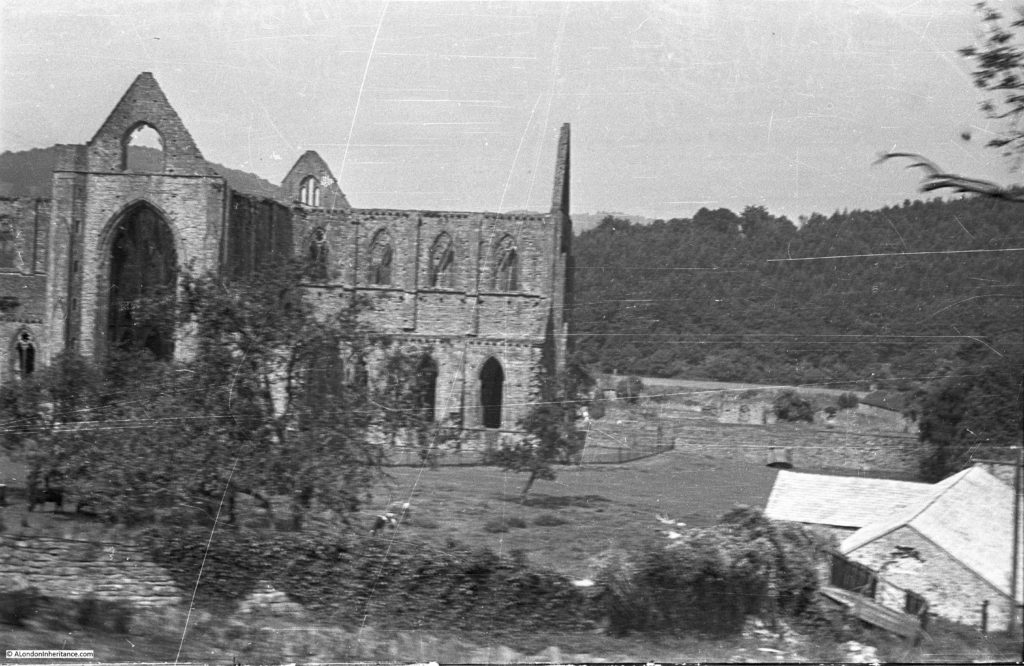 Tintern Abbey is alongside the River Wye which forms the border between England and Wales, so the abbey sits just inside the Welsh border. The River Wye runs through a valley carved through the hills that run along both sides of the river. The majority of the hills are covered in trees, indeed there seems to be more tree cover in 2019 than there was in 1947.

The following map shows the location of Tintern Abbey (circled). The River Severn is the large area of water to the right. the new Severn Crossing is at the bottom of the map and the River Wye curves and loops up from the Severn to create the most wonderful landscape, and to pass alongside Tintern Abbey  (Map © OpenStreetMap contributors). 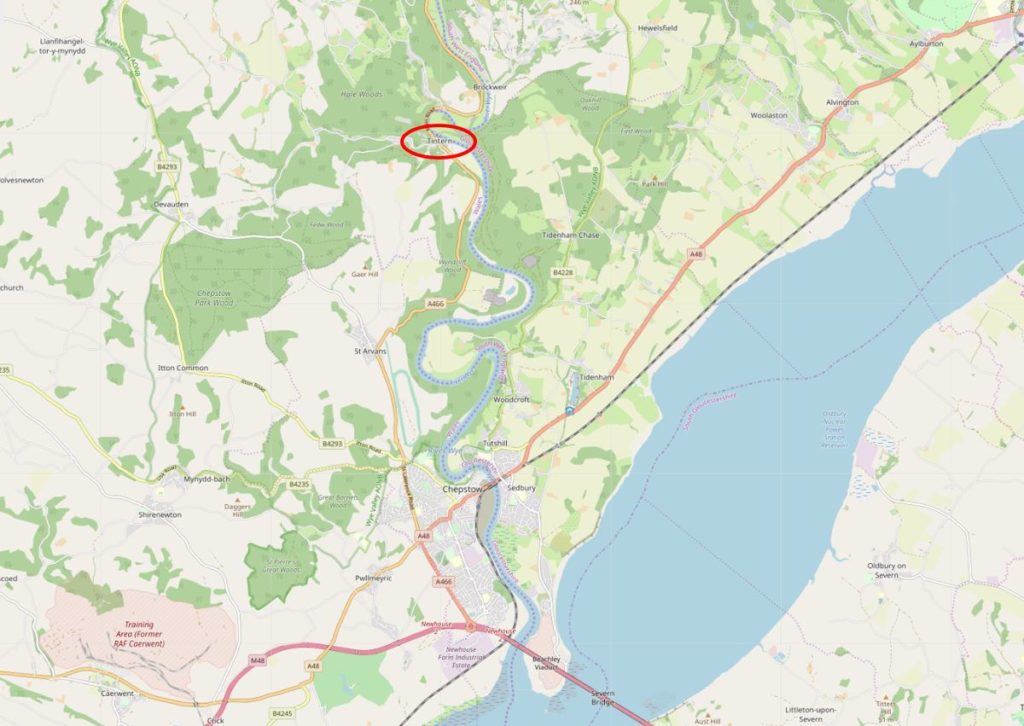 Within the grounds of the abbey. The surrounding hills provide a tree covered background to the ruins. 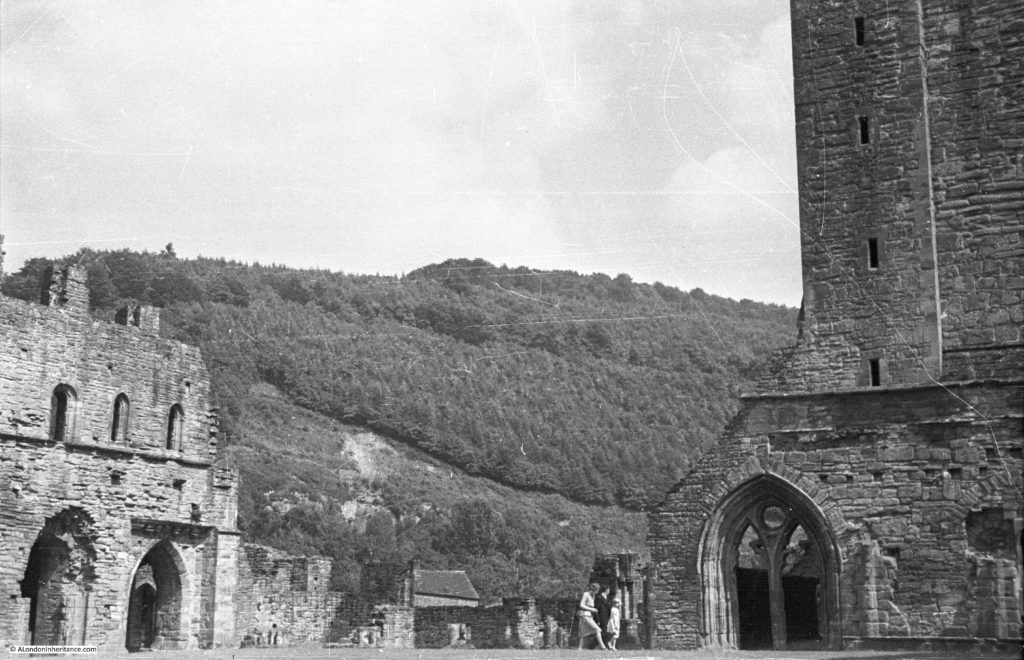 The origins of Tintern Abbey date back to 1131 when Walter Fitz Richard of Clare, the Anglo-Norman Lord of Chepstow founded the abbey for Cistercian monks who established a basic abbey consisting of timber buildings, alongside the River Wye. Stone buildings soon followed, but it would not be until 1269 when construction would start on the abbey we see today.

The borders between England and Wales were a frequently contested area and Marcher Lords, appointed by the Crown, held land in both Wales and England on either side of the border. It was the patronage of one of the Marcher Lords, Earl Roger Bigod, Lord of Chepstow, who contributed significantly to the funding of the abbey built from 1269. The Bigod family were also responsible for much of the construction of nearby Chepstow Castle.

The abbey would last for a further 200 years, until King Henry VIII’s Reformation when Tintern Abbey was taken by the Crown in 1536.

There then followed centuries of decay. The lead roof was melted down, the arches supporting the roof of the magnificent nave would collapse, the surrounding buildings would be demolished, mainly down to foundation level and much of the stone of the abbey would be robbed and reused for other construction in the area.

The following photo shows the view in 1947, looking along the south transept. The group of men in Army uniform in the foreground were probably with my father, as from other photos he was also in uniform, as part of his National Service was in nearby Chepstow. 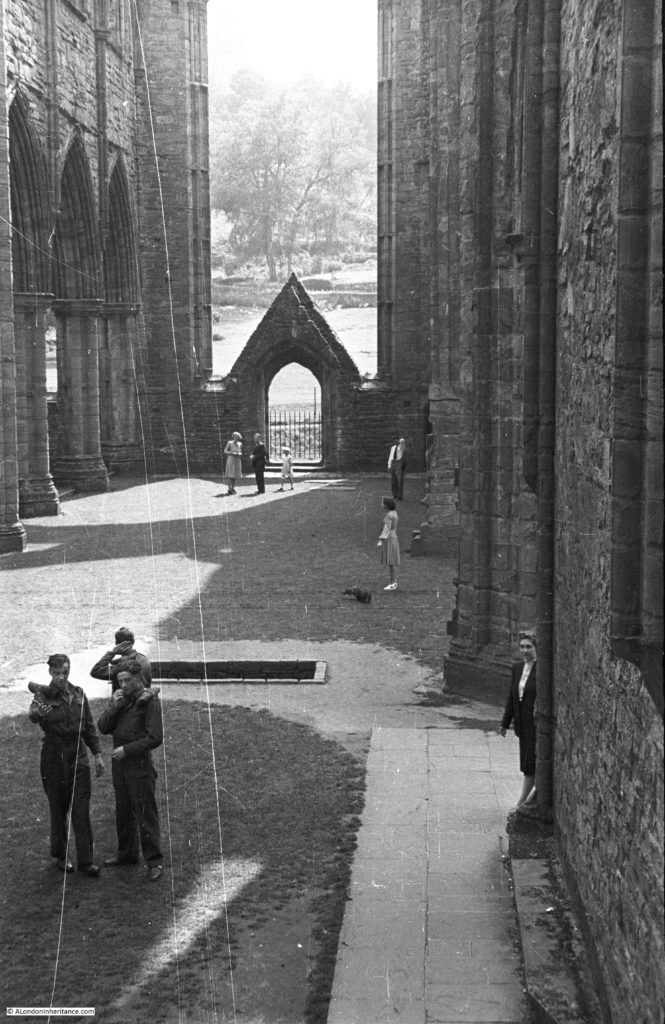 After centuries of neglect, Tintern Abbey was rediscovered in the 18th century. The ruins were covered in ivy, small trees and plant growth. The remains of parts of the roof and stone work from the walls covered the abbey grounds.

This “Romantic” view of the British countryside, and antiquities from the past, were the fashion of the time, and became the focus of early forms of tourism.

The romantic view of Tintern Abbey was fed by authors such as Reverend William Gilpin, the poet William Wordsworth, and by the artist JMW Turner, who in 1794 completed the following painting of the east window of Tintern Abbey. 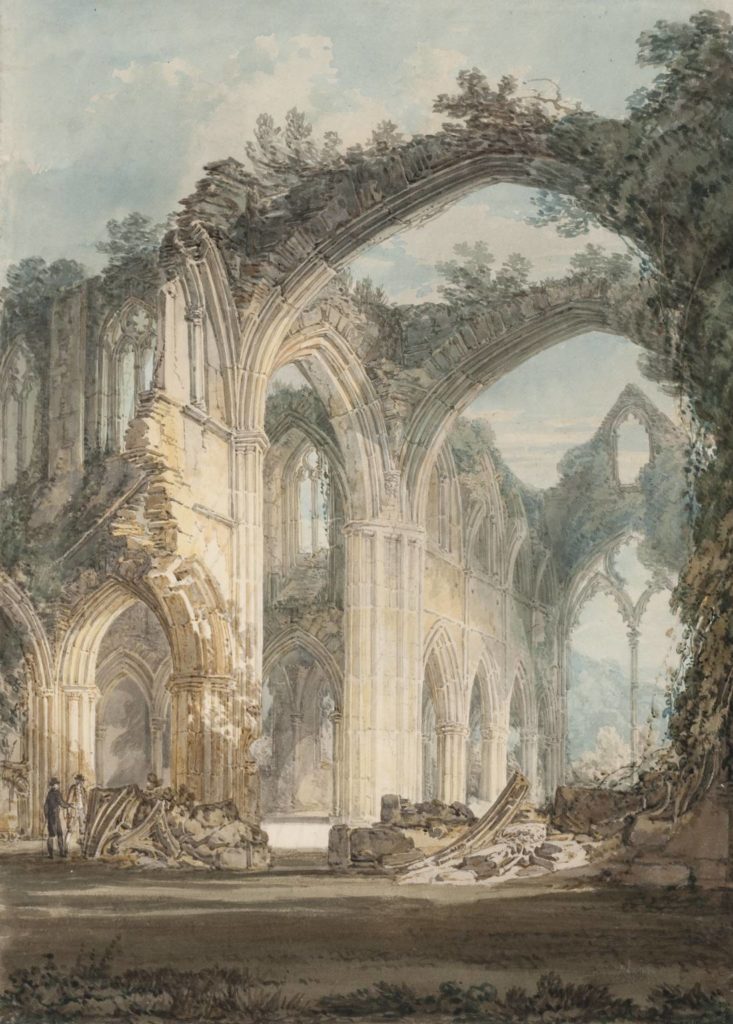 The Chancel and Crossing of Tintern Abbey, Looking towards the East Window 1794 Joseph Mallord William Turner 1775-1851 Accepted by the nation as part of the Turner Bequest 1856 http://www.tate.org.uk/art/work/D00374 Image released under Creative Commons CC-BY-NC-ND (3.0 Unported)

By 1947, tree and plant growth had been removed, rubble and stone covering the floor of the abbey had been cleared, but the east window still looked exactly the same as when Turner visited the site at the end of the 18th century. 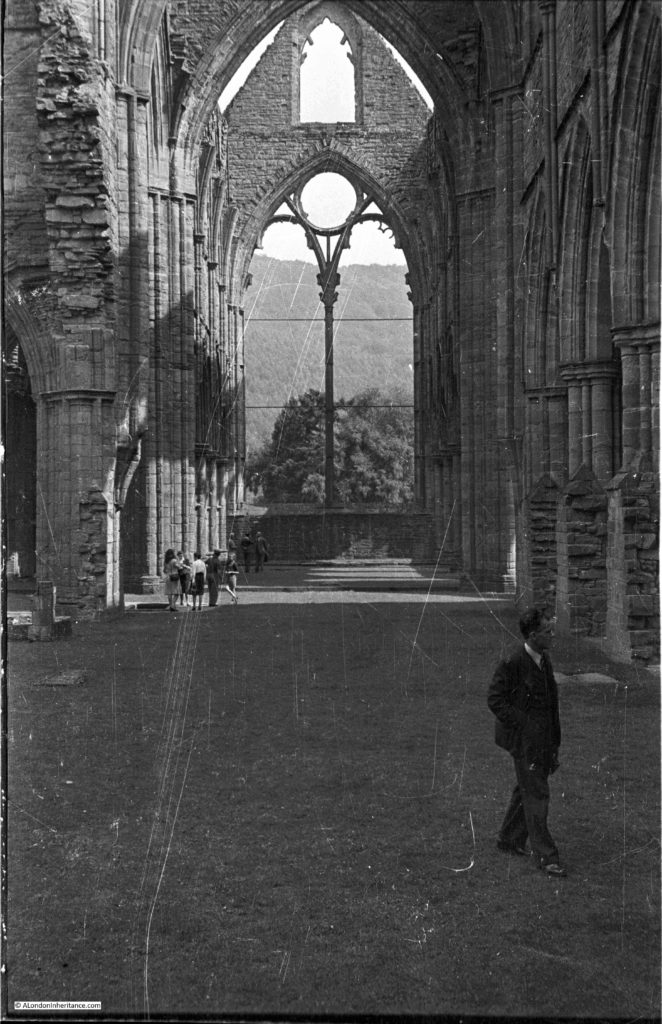 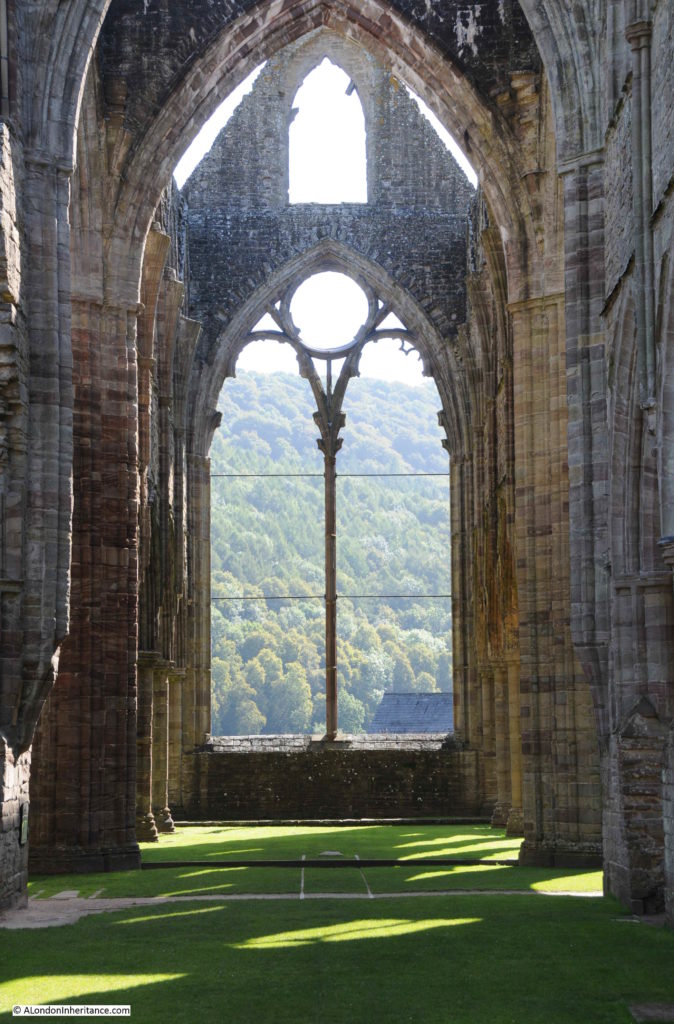 The central church of Tintern Abbey looks glorious on a sunny summer’s day. Although the roof has been lost, there is enough of the medieval architecture and craftsmanship remaining to understand what a significant building this must have been.

What is not obvious today, is that many of the standing piers of the abbey ruins have a steel core. After the abbey was handed to the Crown, many of the walls were found to be in such a state that temporary piers were built below the arches. This allowed the original piers to be dismantled, with steel stanchions then being installed, with the original facing stones then being replaced around the new steel core.

The following photo looks along the nave towards the west window. 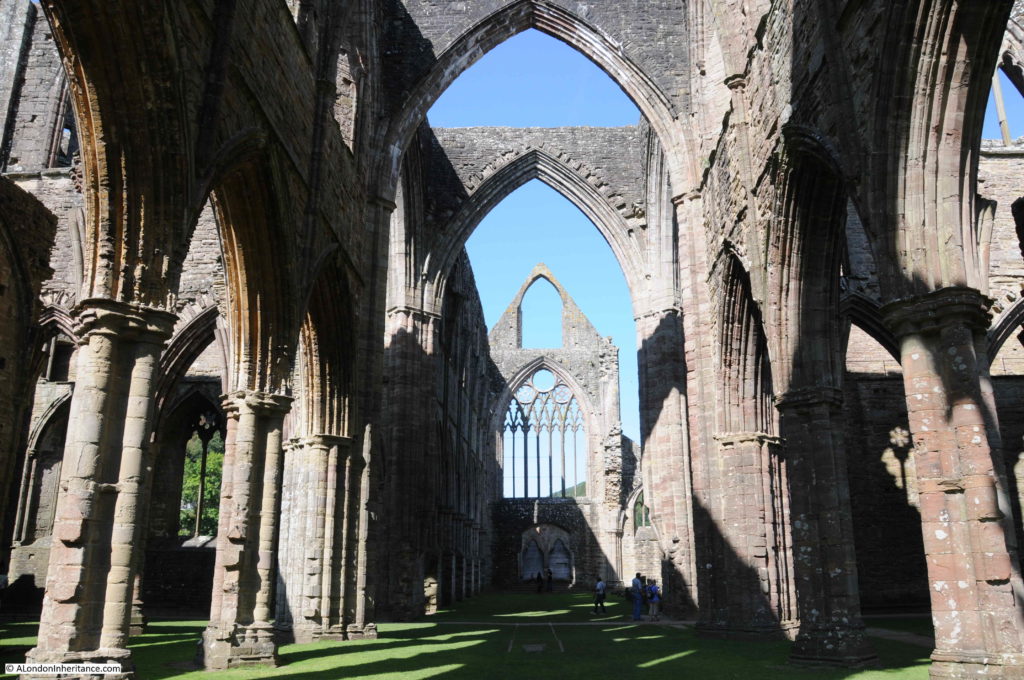 Although the nave is clear today, when Tintern Abbey was in use, the nave would have been split into separate areas with partition walls, and passages running along the length of the side walls.

The view looking towards the south transept. 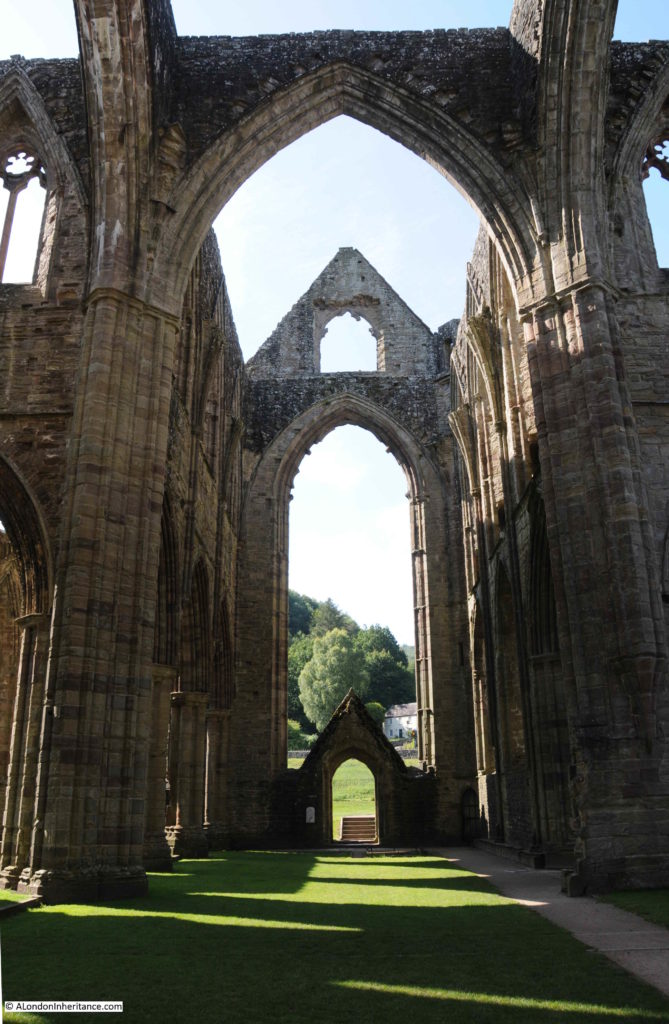 Substantial columns, arches and walls, again demonstrate the scale of the original church. 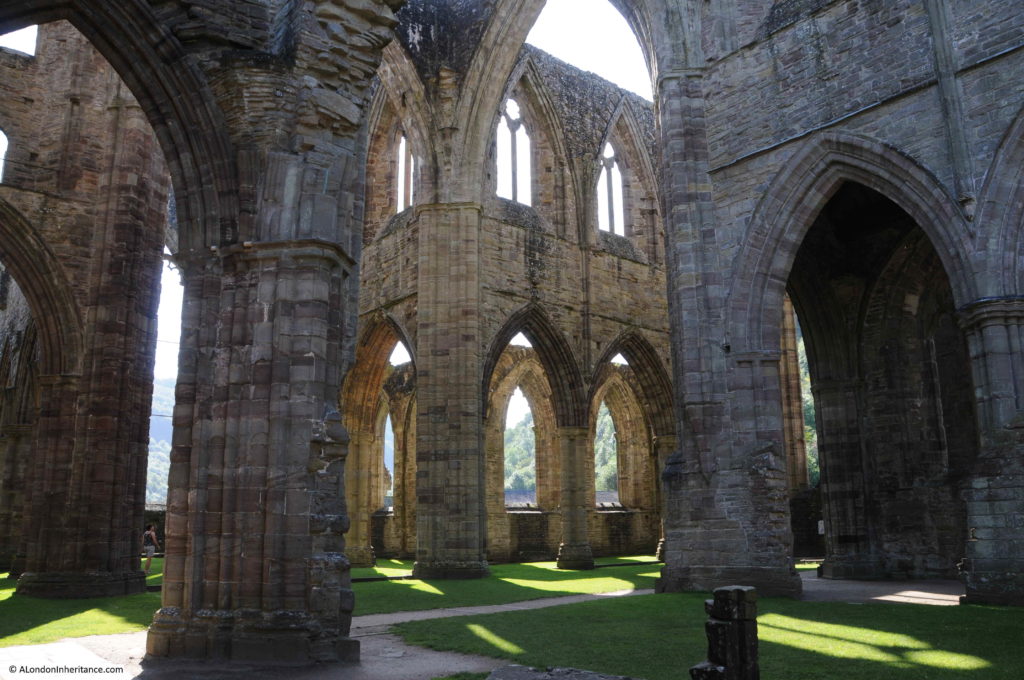 The eastern view of the central church, with the east window: 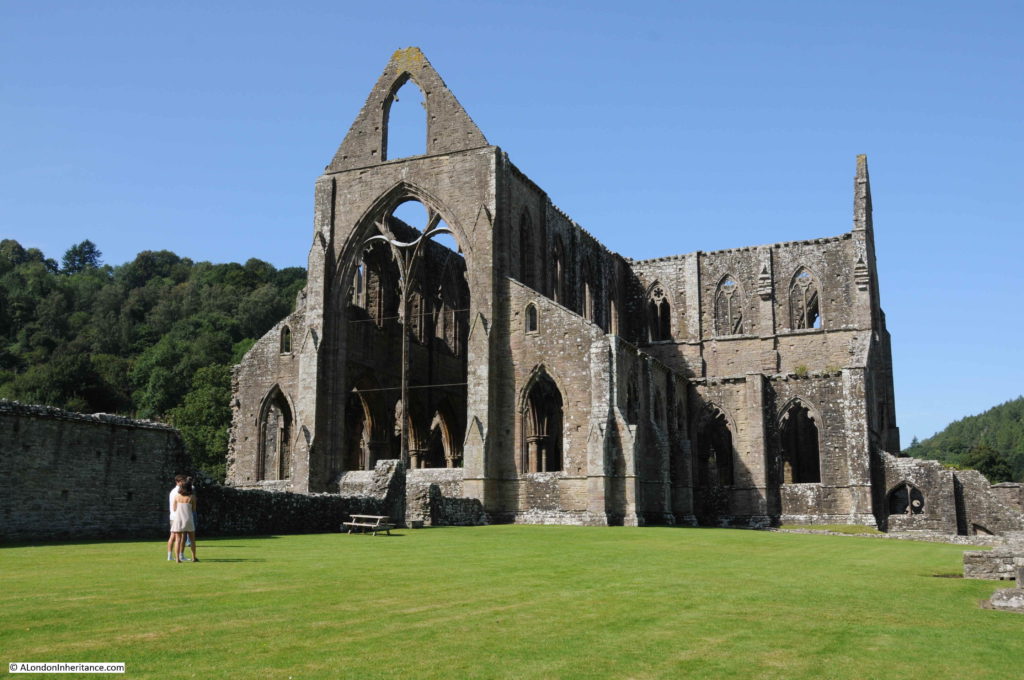 The view from the north is shown in the following photograph. To the north of the central church, there are the foundations and many of the remaining walls of the buildings that once supported the many functions associated with the abbey – living spaces, store rooms, kitchens etc. 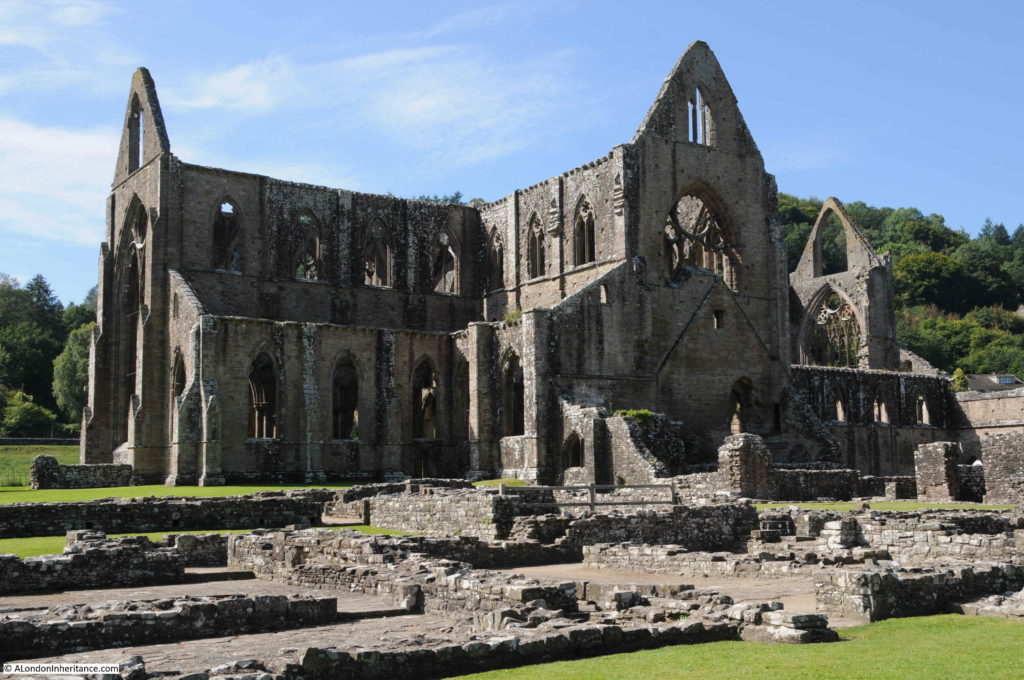 The location contributes so much to the history of Tintern Abbey. The following photo, taken slightly further north, shows the River Wye, the surrounding hills and to the right, the tops of the walls of Tintern Abbey can be seen. 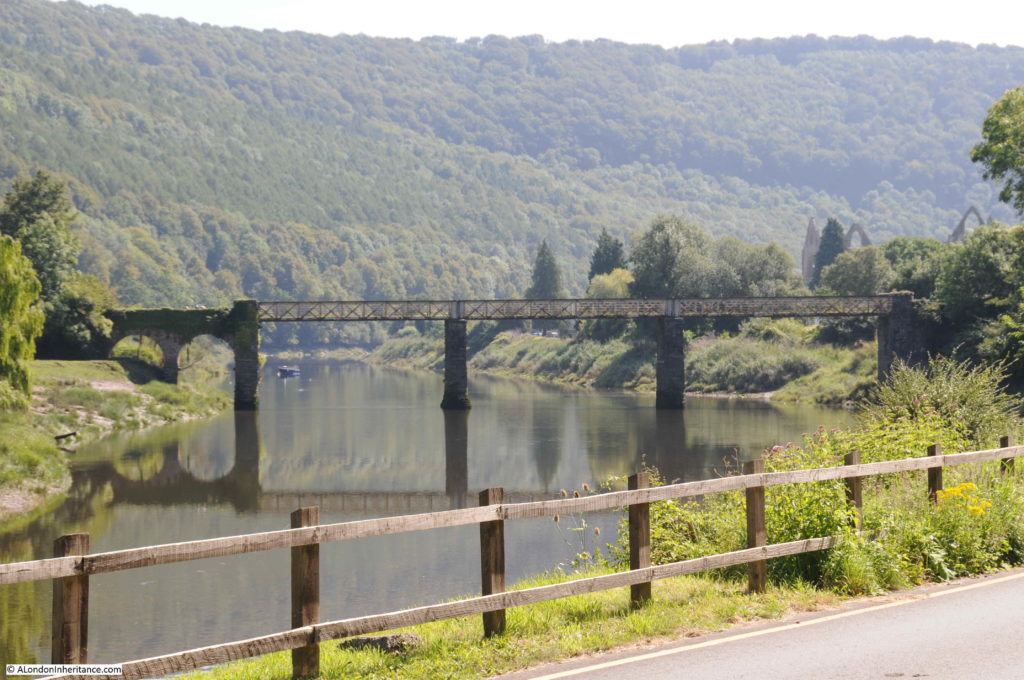 This helps understand why Tintern Abbey was built in such a location.

It was probably a suitable area of flat ground, but being next to the River Wye provided easy access to the River Severn, and therefore out to sea. The River Wye also provides access inland with the town of Monmouth being further north along the river. Transport along the river would have been so much easier than along medieval roads, and probably much safer. The river also must have provided a supply of fish to supplement the monk’s diet. The surrounding hills provided a large supply of timber and wood for burning.

As well as the painting by Turner, Tintern Abbey was the subject of a large number of paintings and drawings that focused on the Gothic / Romantic nature of the ruins. 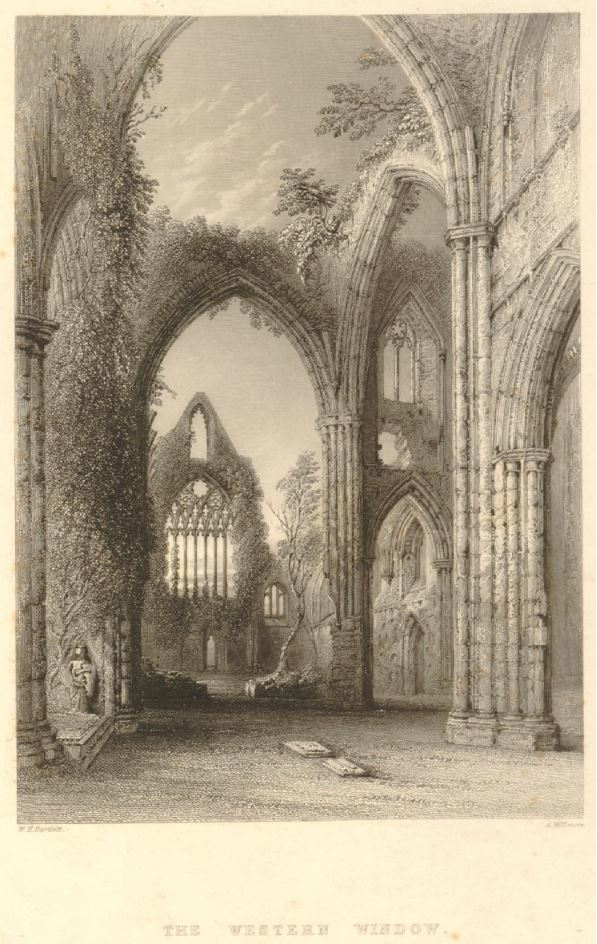 A south view of Tintern Abbey after S.C. Jones and dated to 1825: 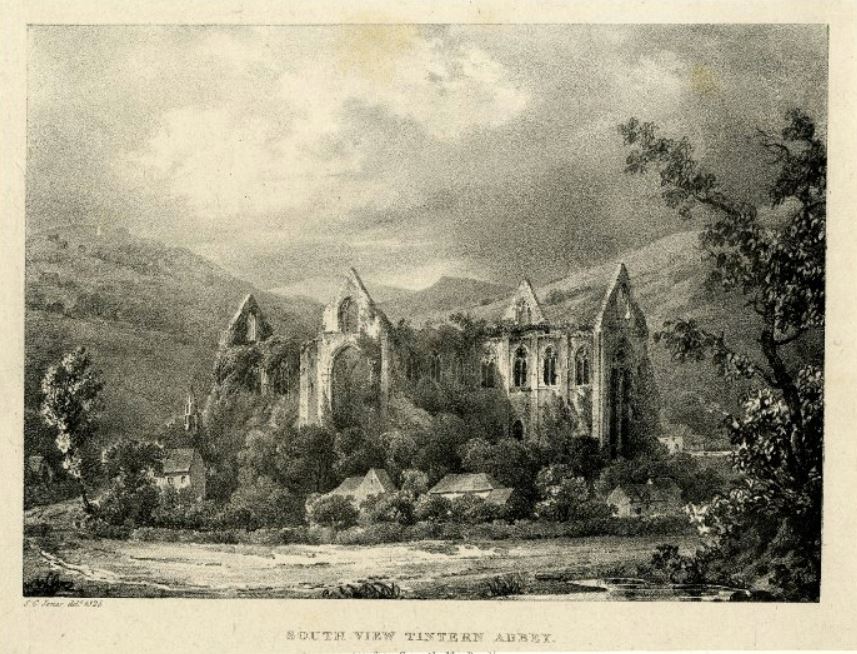 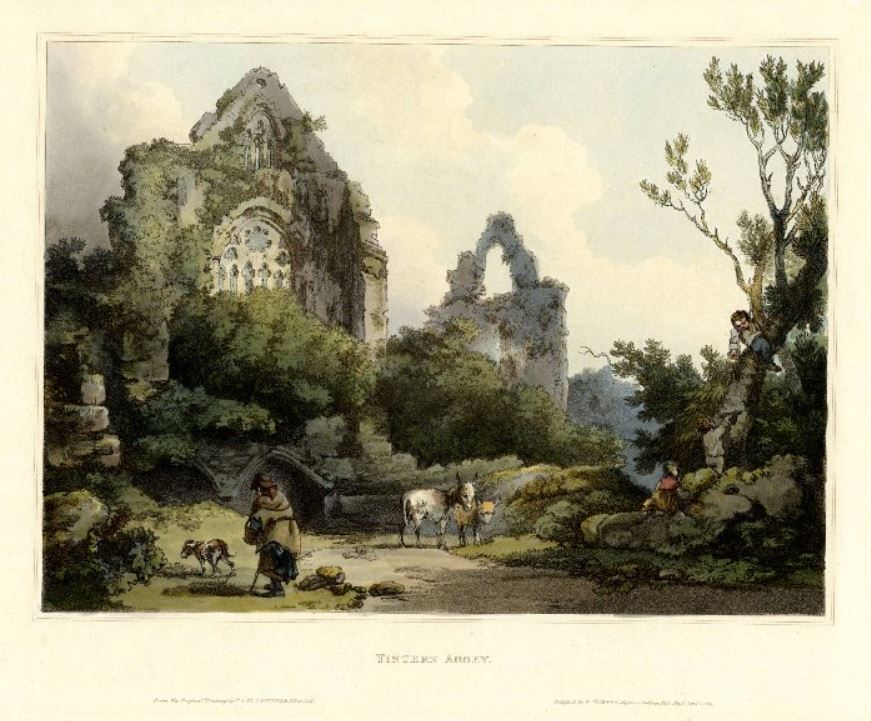 From the late 18th century onward, Tintern Abbey has attracted significant numbers of visitors. Although the abbey today is not the overgrown, romantic vision which attracted early tourists to the site, it is still remarkably impressive, not just the abbey ruins, but the location which seems to complement the abbey perfectly. The 12th century monks could not have picked a better location.

Tintern Abbey was sold to the Crown in 1901 and is now the responsibility of Cadw, (the Welsh Government’s historic environment service).

Although much of the surroundings of the abbey, not occupied by the church, walls and foundations, are grass lawns, there is a large oak tree that dates from 1911, and the plaque demonstrates that the abbey grounds were seen as the appropriate place to commemorate national events. 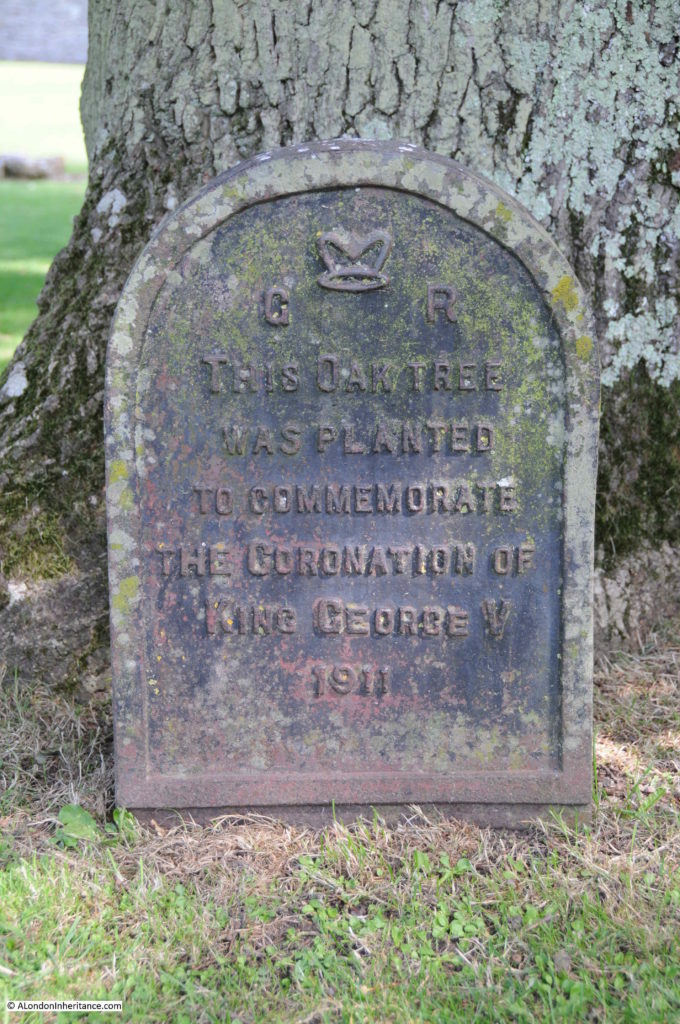 The abbey is named after the village of Tintern, which is strung out along the road that passes the abbey, and in the surrounding hills. Evidence of occupation in the Bronze Age can be found in the surrounding hills. In the 6th century, the West Saxons had started to expand into South Wales and in 765 a small church is recorded at Tintern Parva (little Tintern, at the northern end of the village).

According to the Penguin Dictionary of British Place Names, the name is of Celtic origin. The Welsh form of the name is Tyndyrn and means “king’s fortress”.

According to legend, Tewdric, the King of Gwent won a battle against the Saxons near Tintern. In 1849 a sculpture of the event was exhibited in the Sculpture Room of the Royal Academy. The work by J.E. Thomas shows the wounded King Tewdric urging on the pursuit of the fleeing Saxons, attended by his only daughter, Marchell and an aged Welsh bard. 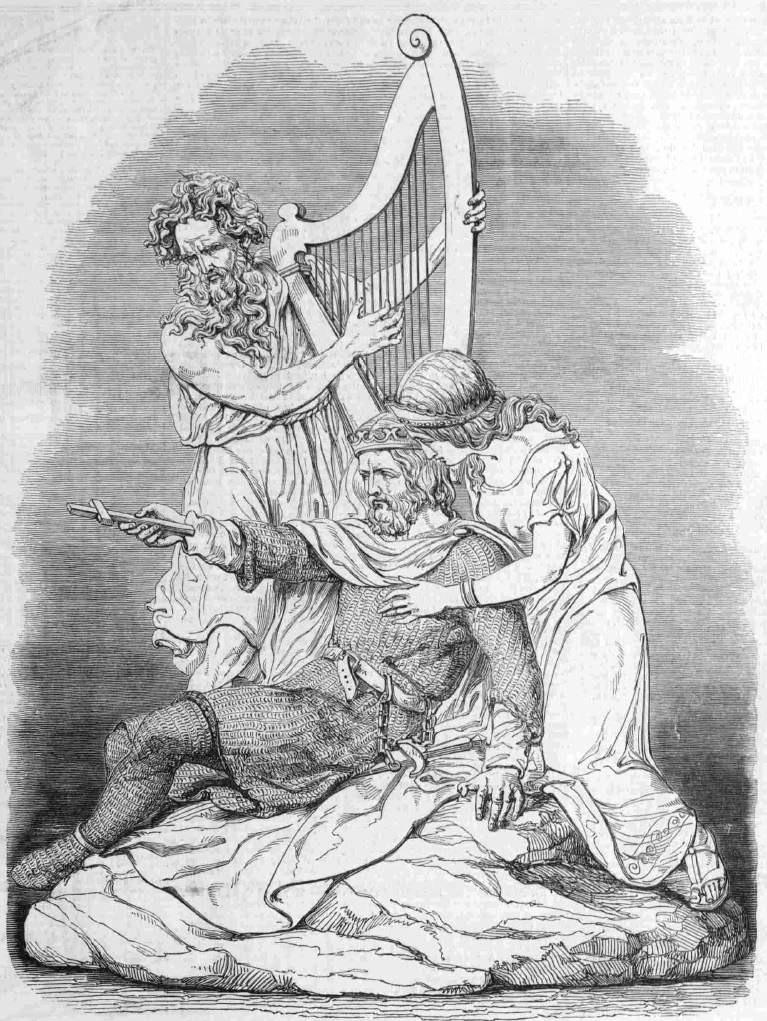 Works such as this, as well as the many prints and paintings of the abbey added to the historical and romantic interest in visiting the area.

From the mid 16th century, a number of iron works were established in the surrounding hills and brass was produced for cannons. Iron works and wire production continued to the late 19th century.

Construction of the Chepstow to Monmouth road in 1829 improved access to the abbey and village, which was further enhanced in 1876 with the opening of the Wye Valley Railway. This must have been one of the most picturesque railways in the country, however it seems to have permanently run at a loss and passenger services closed in 1959, with the line continue to carry limited volumes of production from quarries close to the route, however this trade also finished in 1990 when the railway closed.

To the west of the abbey is a large, relatively flat field: 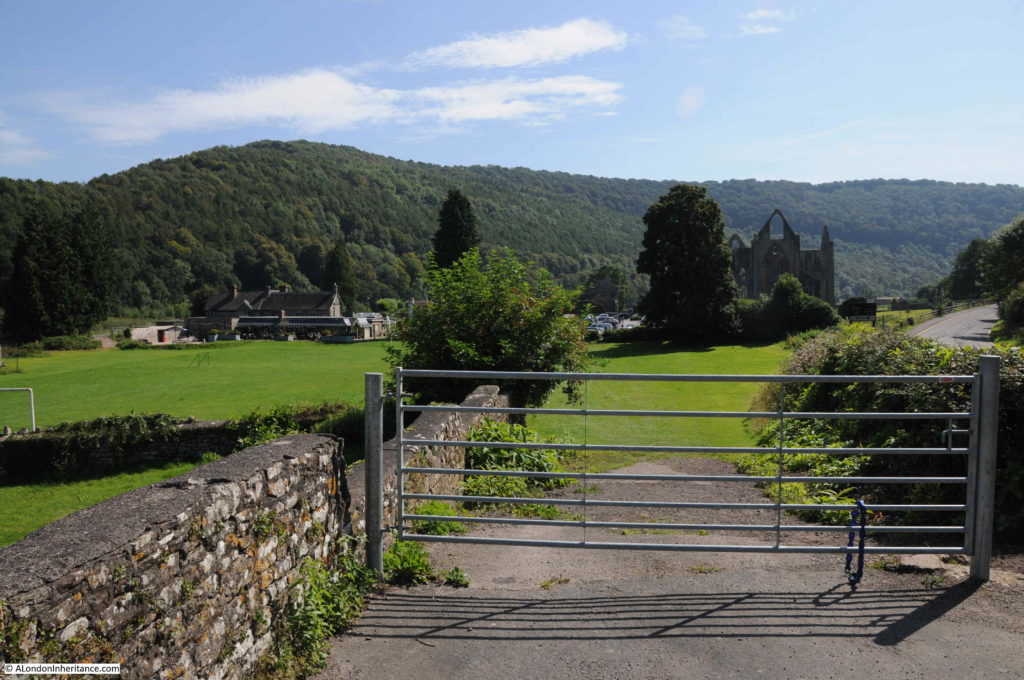 Goal posts on the field give a clue that this is a community resource. The field also backs onto a pub and cafes between the field and Tintern Abbey. 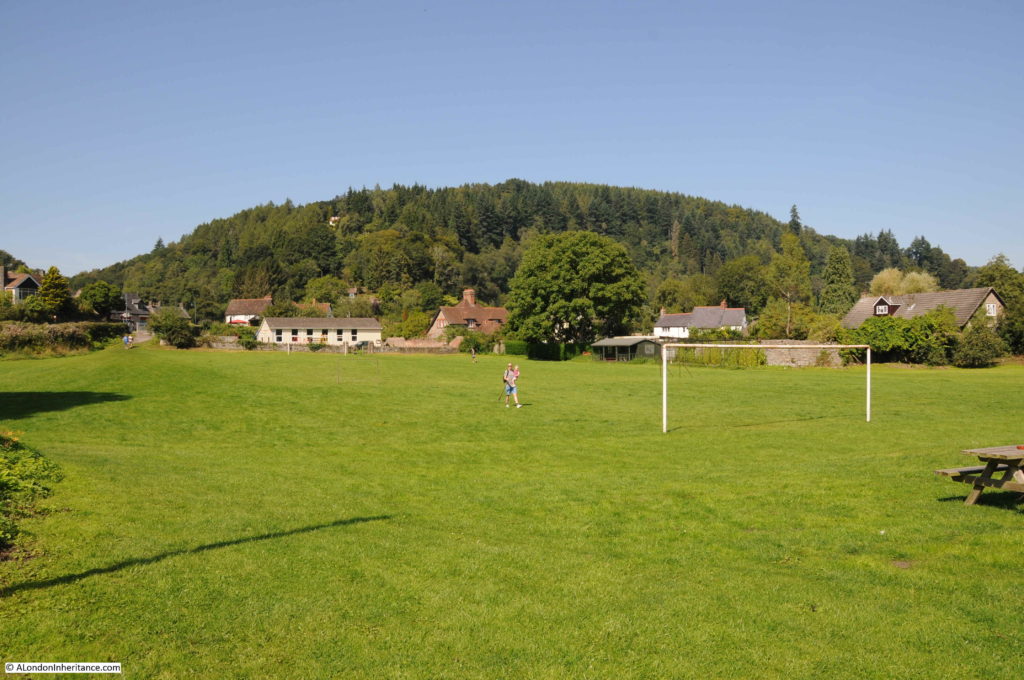 My father also took a number of photos in this field during his visit to Tintern Abbey in 1947: 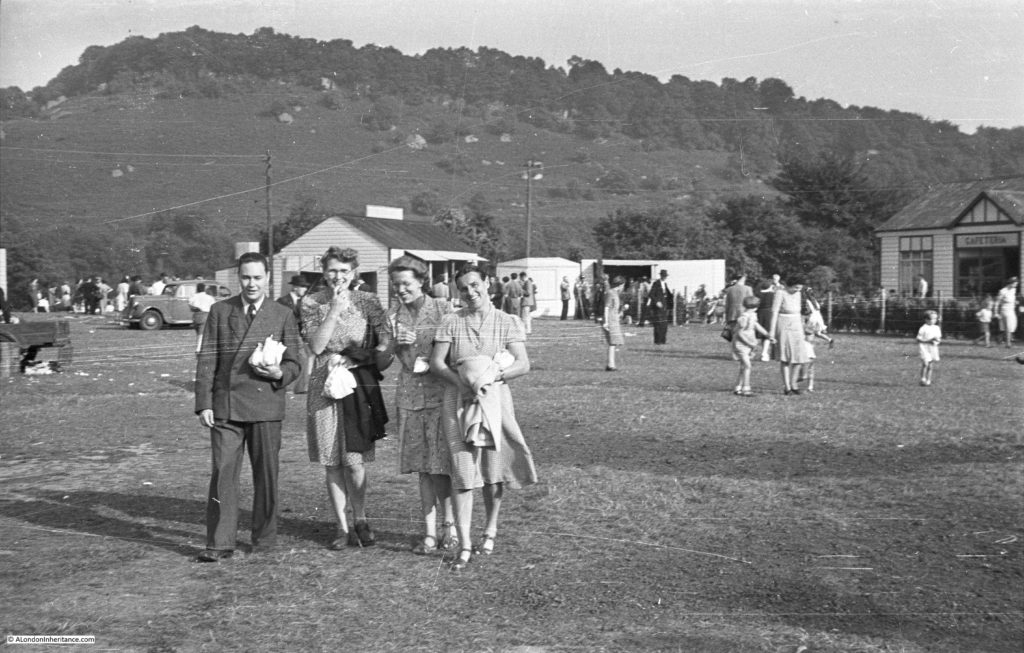 I have no idea what was happening, whether this was some village event, or perhaps part of the facilities put on for tourists visiting the abbey on a sunny, summer’s day – I suspect the later. 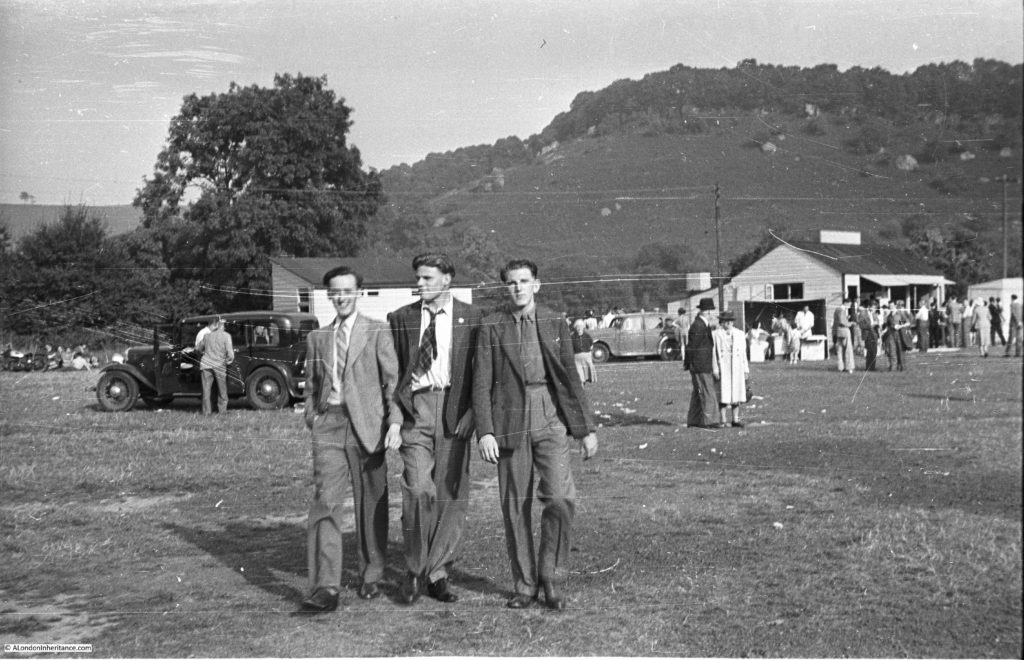 Today, the road leading to the abbey, to the side of the field, is lined with a couple of cafes, gift shop, pub and car parks. The location is popular not just for the abbey, but for walking along the River Wye and the surrounding hills. In 2019 though, there were no horse rides available. 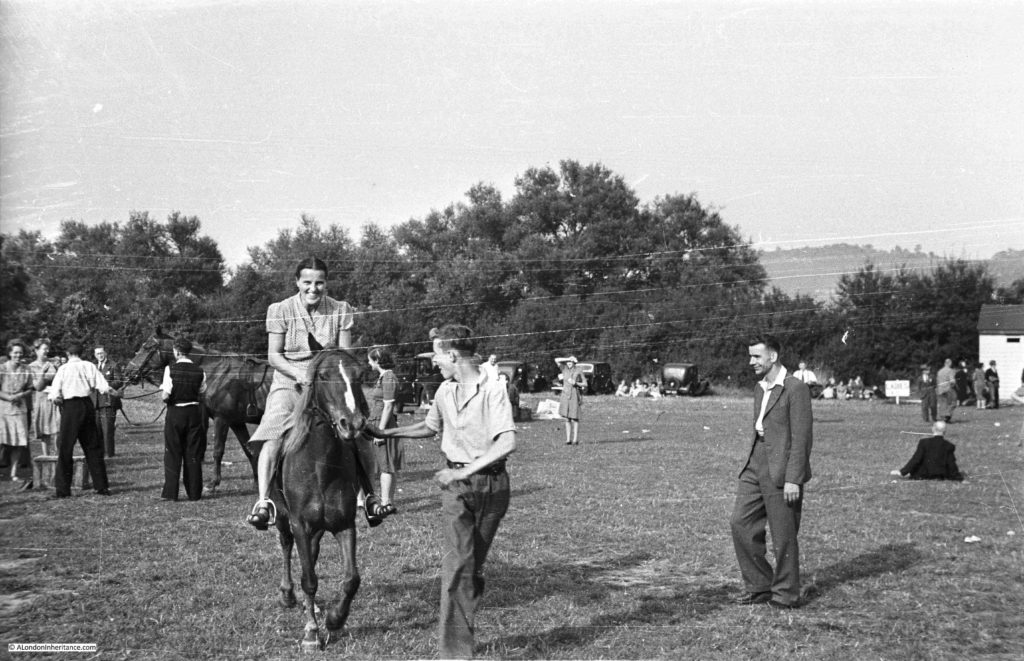 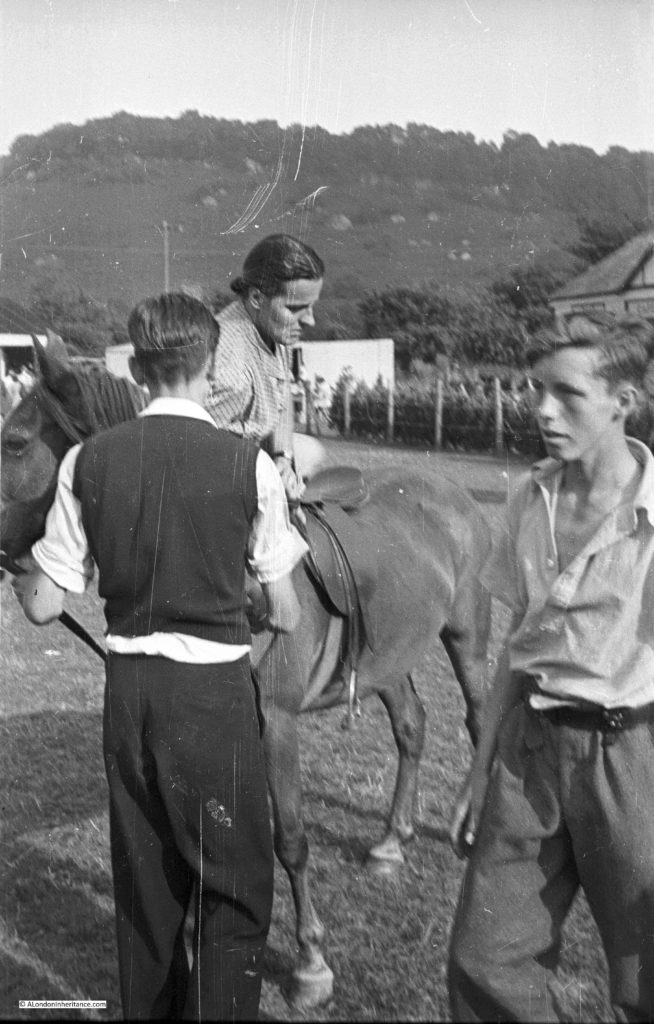 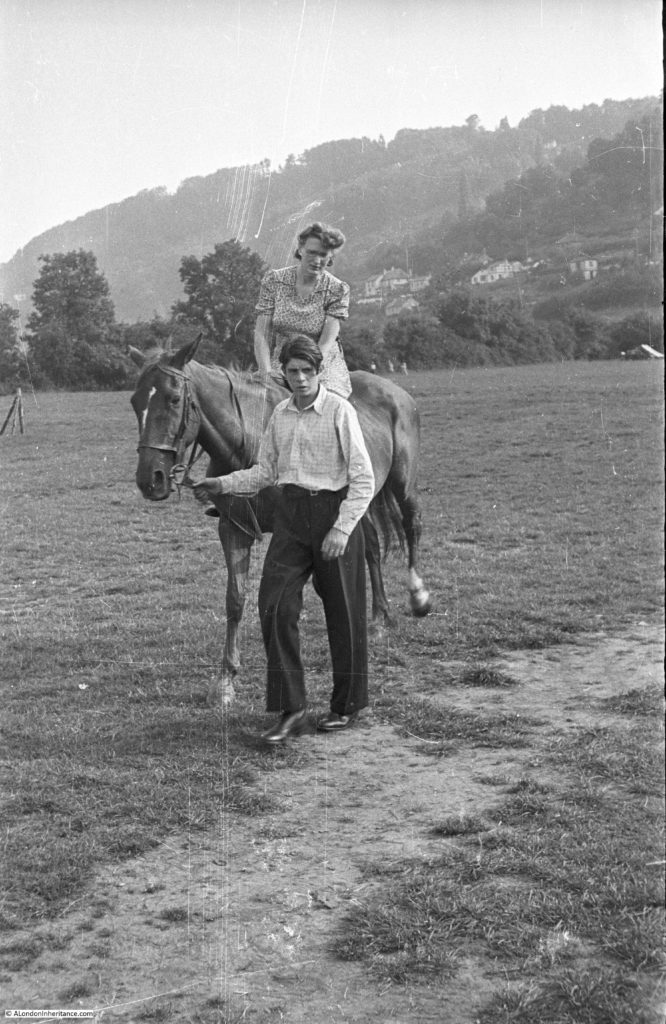 Whether for the history, architecture, the River Wye or the surrounding landscape, Tintern Abbey is a fascinating place to visit. And revisiting on the weekend of the shortest day of the year, after weeks of rain and overcast skies, it is a reminder for me that the days will now get longer and the sun will start to rise higher in the sky.