A brief post for this Sunday, with a visit to a stunning building that is almost all that remains of one of London’s early hospitals. This is the chapel of the old Middlesex Hospital, now known as the Fitzrovia Chapel.

Turn off Tottenham Court Road into Goodge Street, then cross over to where it becomes Mortimer Street, and a short distance along is this rather bland entrance to a recent development – Fitzroy Place. 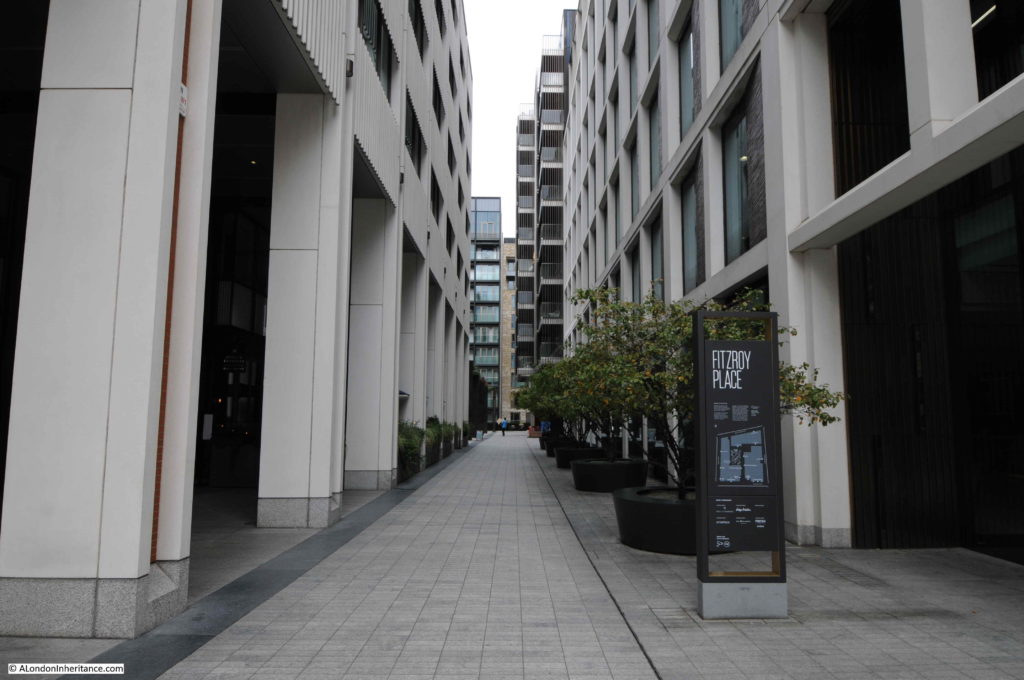 This is the site of the old Middlesex Hospital, now occupied by a development of apartments, restaurants and office space. There is one main survivor of the hospital, located at the core of the new development that is well worth a visit. This is the chapel of the Middlesex Hospital, now known as the Fitzrovia Chapel. Located in a central square, partly behind a row of trees is the brick built chapel, looking very different from the buildings that now surround. 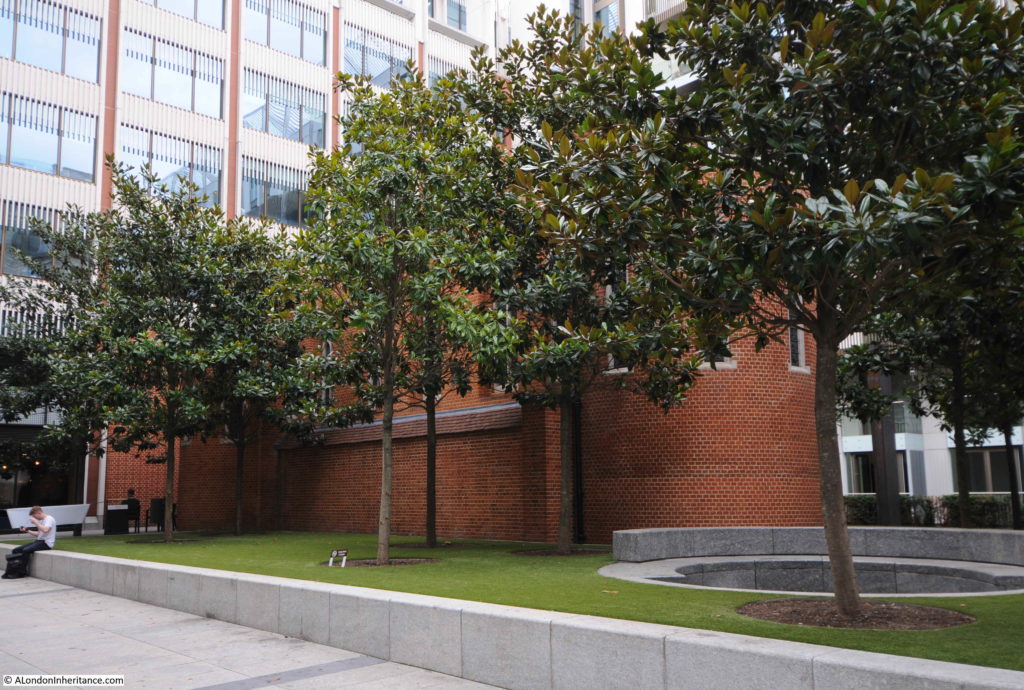 The exterior of the Fitzrovia Chapel is relatively plain, constructed mainly of red brick with very little in the way of exterior decoration, but step inside the building and a very different experience awaits.

Looking along the nave of the chapel towards the altar (behind the TV screen), and the chancel. 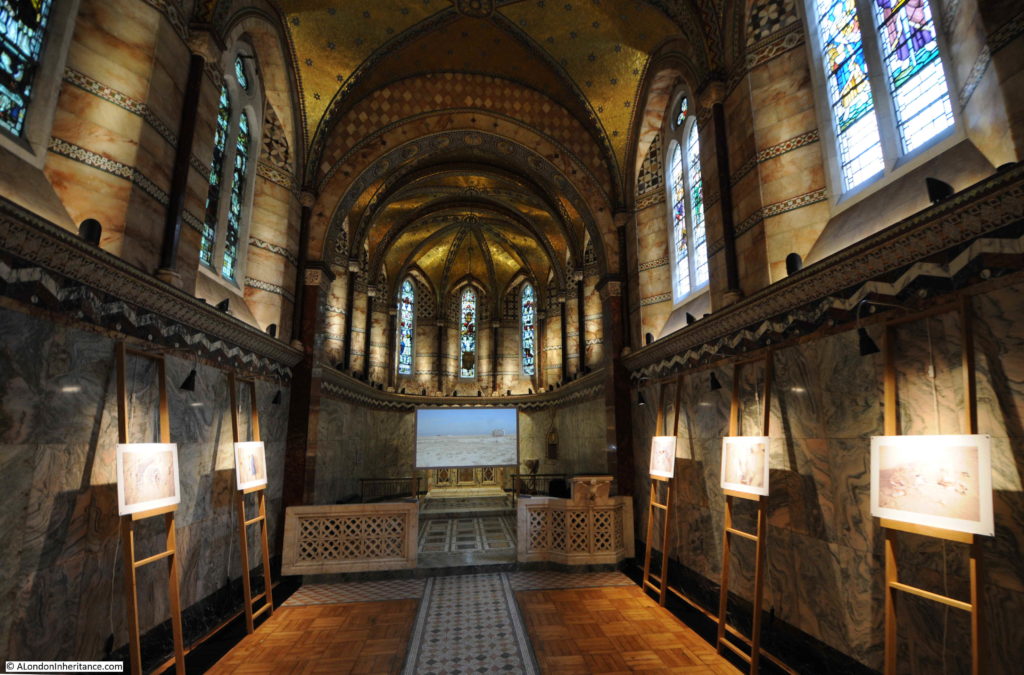 Looking up at the decoration of the chapel. 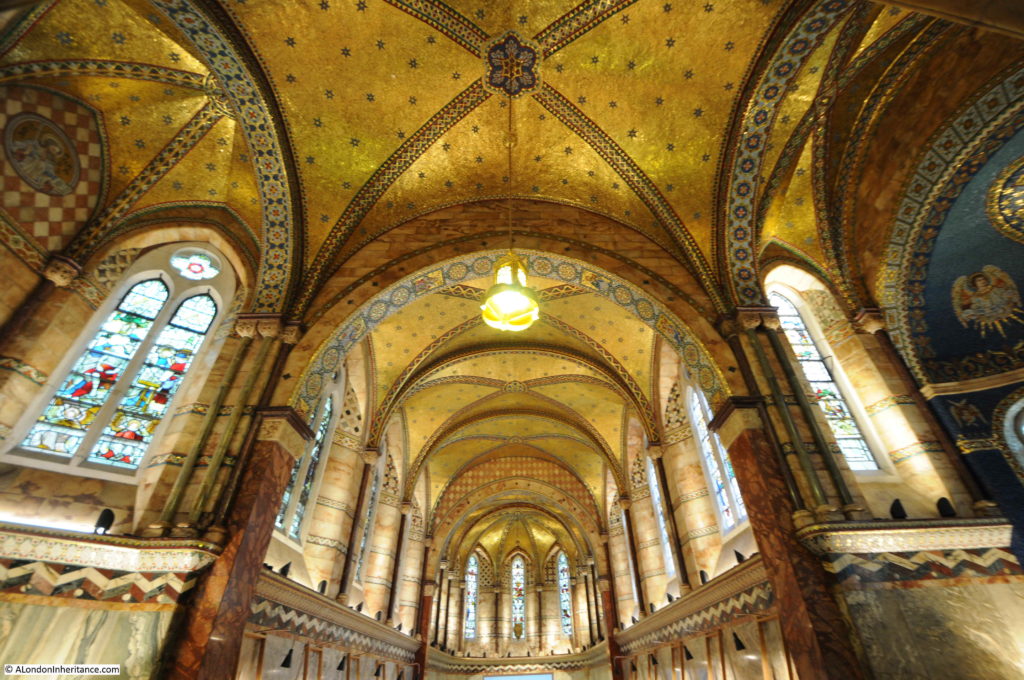 The interior decoration of the chapel is the complete opposite to the exterior. Colour and decoration cover almost every surface. 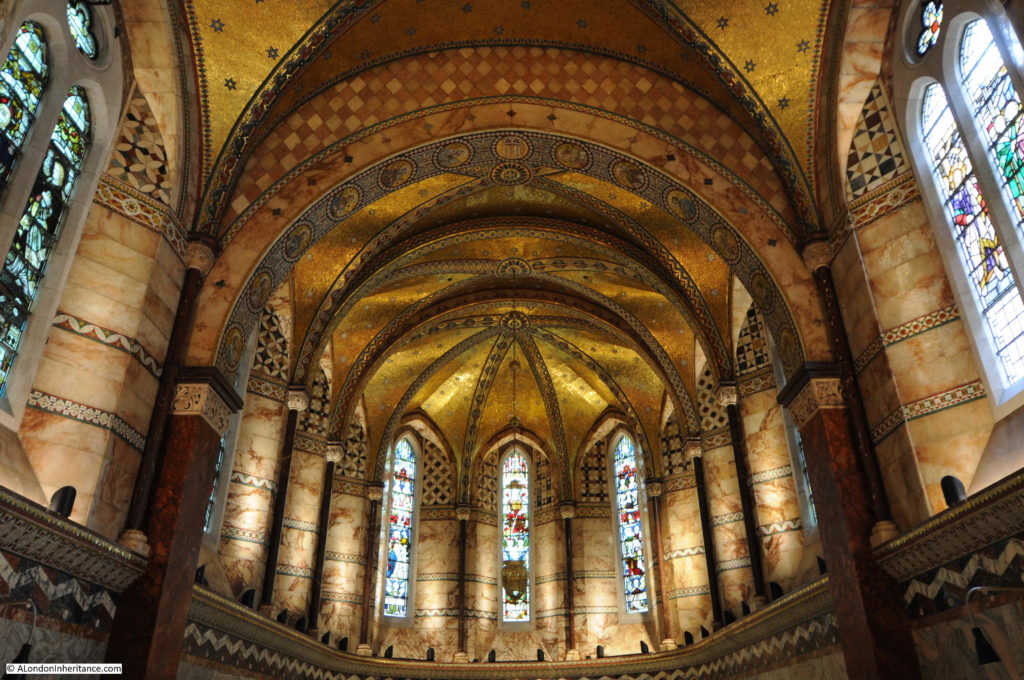 The Fitzrovia Chapel is of relatively recent construction. Dating from 1891, with the interior decoration completed by 1929, although the origins of the Middlesex Hospital of which the chapel was part, date back to the 1740s.

The chapel was commissioned by the governors of the hospital in the 1880s as a memorial to Major Alexander Henry Ross, MP who had been Chairman of the Board of hospital governors for 21 years. The architect was John Loughborough Pearson who used a background in Gothic religious architecture to his design for the Middlesex Hospital Chapel.  He would not live to see the chapel completed as he died in 1897, however work on the chapel was continued by his son, Frank Loughborough Pearson, and the chapel was finally completed in 1929.

One of the reasons for the length of time it took to complete the chapel was that a commitment was made that no money meant for patient care would be used for the chapel, so as well as the time needed for building and the complex decoration, it was also the time needed to collect sufficient donations to finish such as beautiful building.

The vaulted roof of the chapel is decorated with stars against a stunning gold background with bands of decoration meeting at the centre. 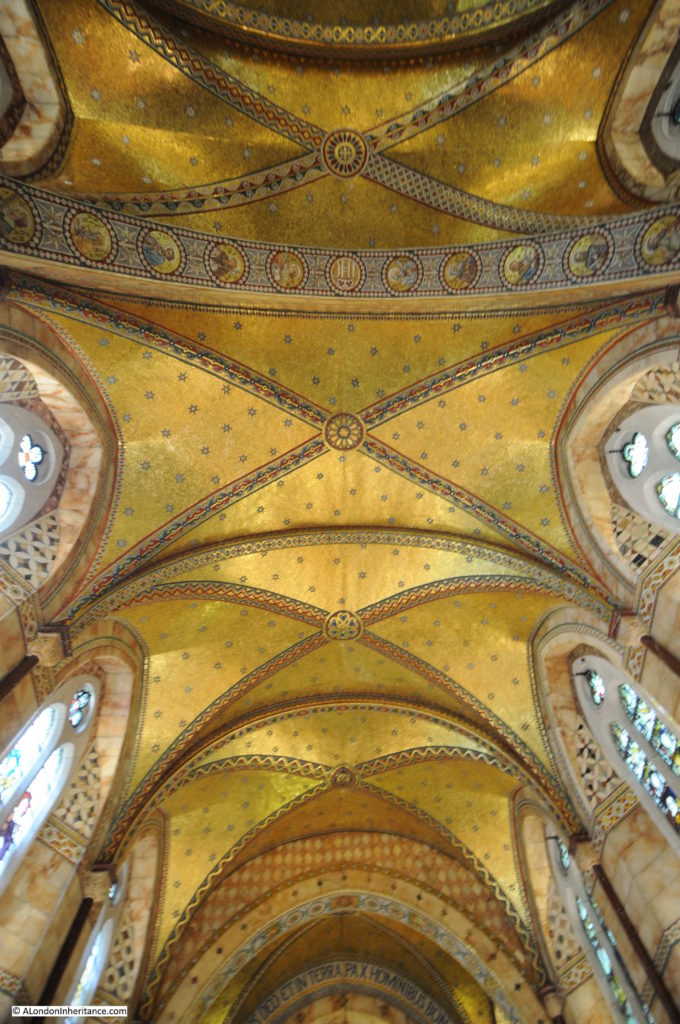 Another view of the roof. 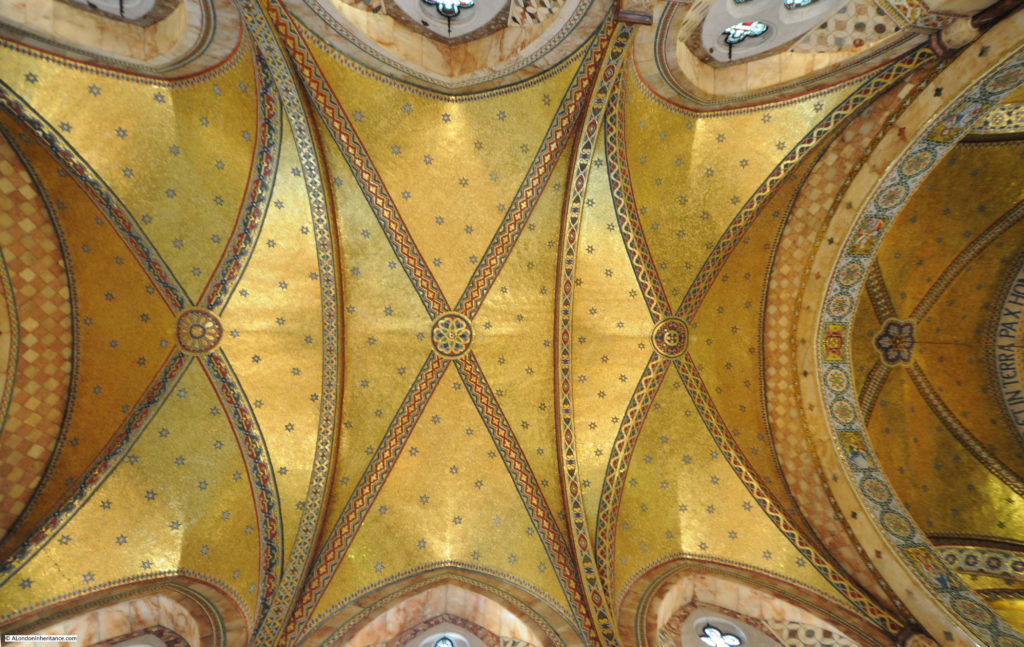 Stained glass windows add to the impression of a religious building, which indeed it is, however the chapel was not consecrated (there was no legal Deed of Consecration), but was dedicated by the Archbishop of Canterbury in February 1939, who described the building as “without question one of the most beautiful hospital chapels in the realm”. 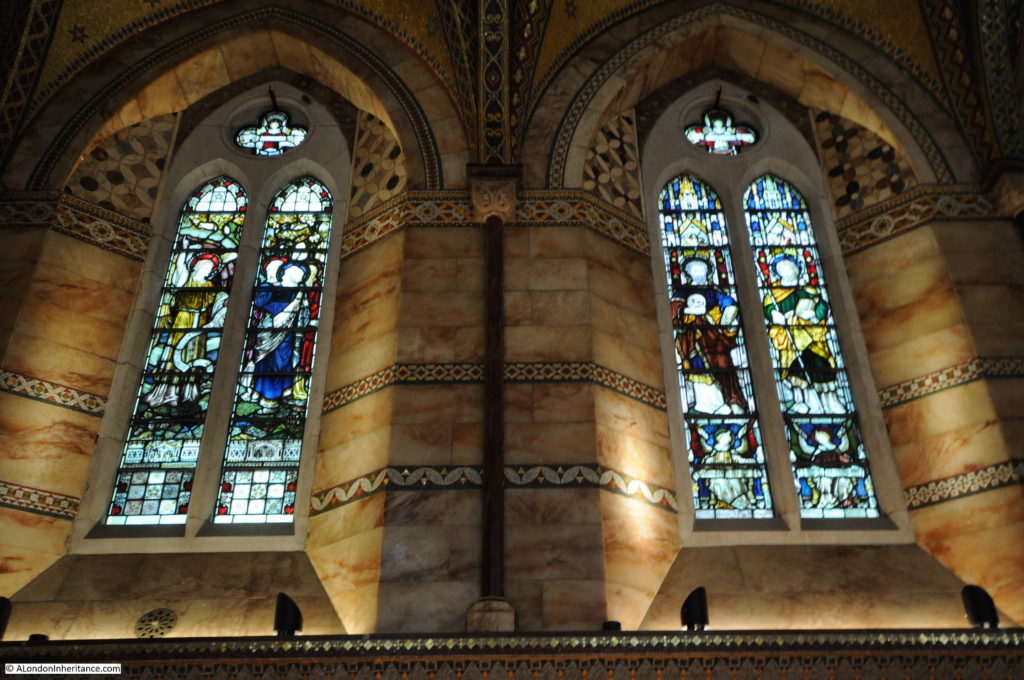 A weekly service held in the chapel was relayed across the hospital to patients.

The chapel was used for many different purposes over the years. Services, concerts by touring choirs, funerals, however one of the more unusual was probably after the death of Rudyard Kipling at the Middlesex Hospital in January 1936. Kipling, who was described in newspaper reports of the time as the “poet of the British Empire”, was taken to the chapel, where his coffin, draped in a Union Jack, was placed before the altar. A bunch of violets were placed on the coffin. These had been sent by Mrs Baldwin, the wife of the Prime Minister. His body was later cremated and his ashes interred in Westminster Abbey.

Since the original establishment of the Middlesex Hospital, the hospital buildings have been through a number of waves of extension and rebuilding, and the last major rebuild was at the time when the chapel was completed, when virtually the whole of the hospital was rebuilt during the late 1920s and early 1930s. 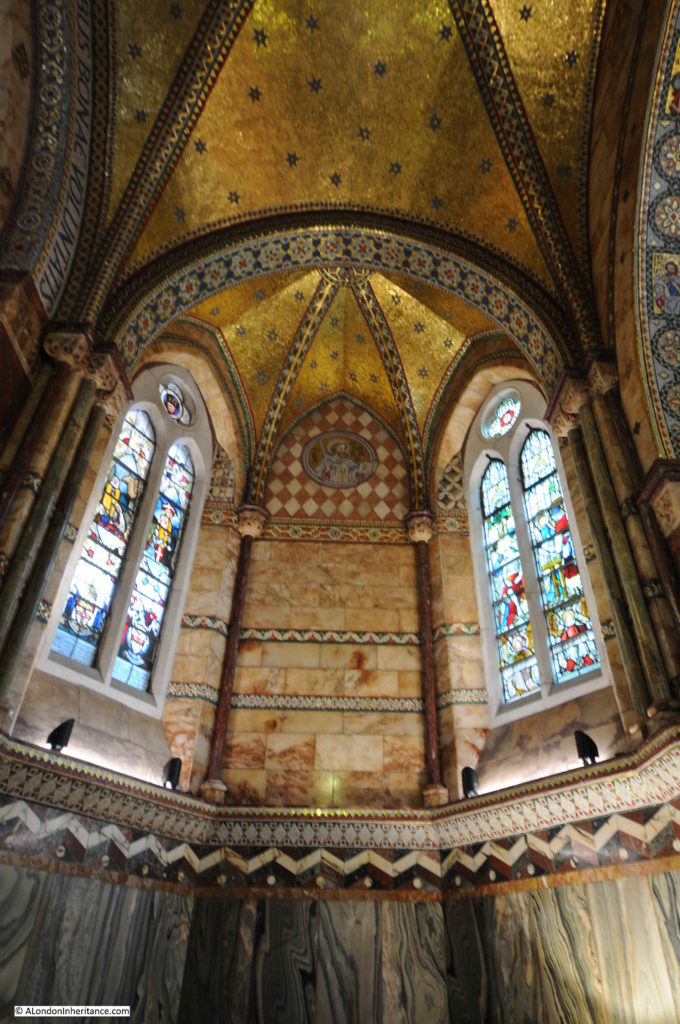 Either side of the entrance to the nave of the chapel is an apse. The south-west apse is decorated in rich blue and golds. 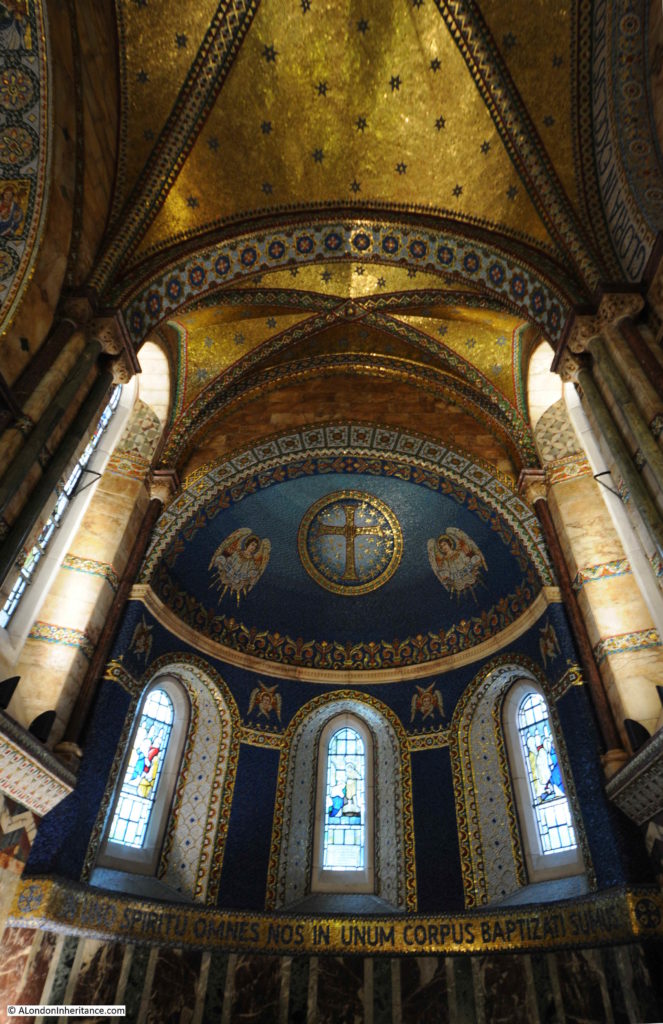 Which provides space for a font, built from a solid block of deep green marble. 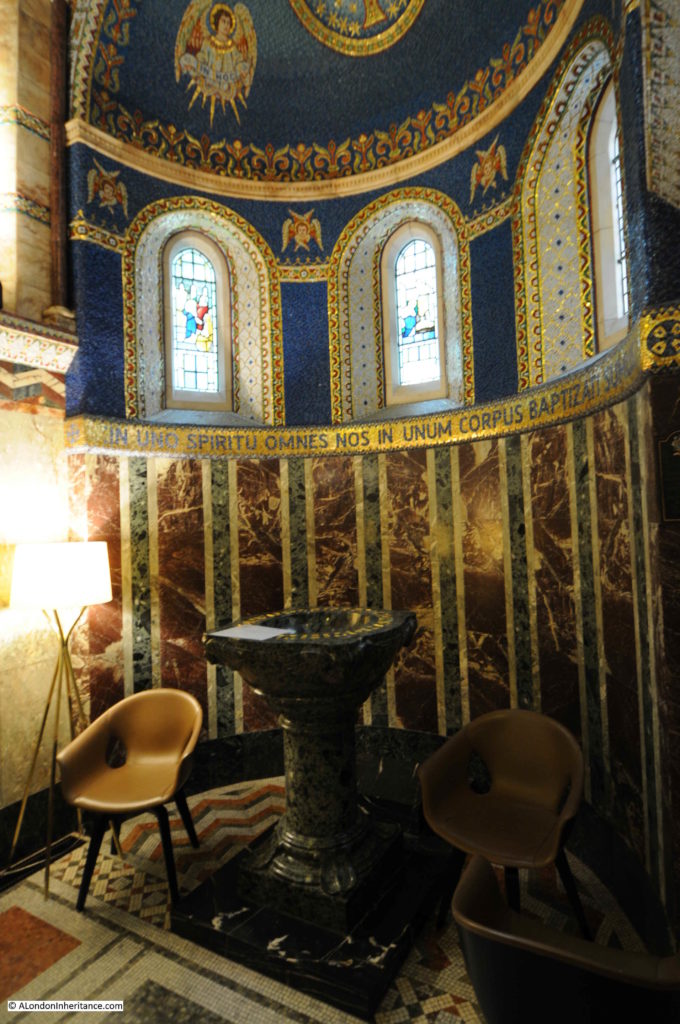 The north-west apse includes a roundel of Saint Barnabas just below the vaulted roof.

The organ gallery above the main entrance to the nave. 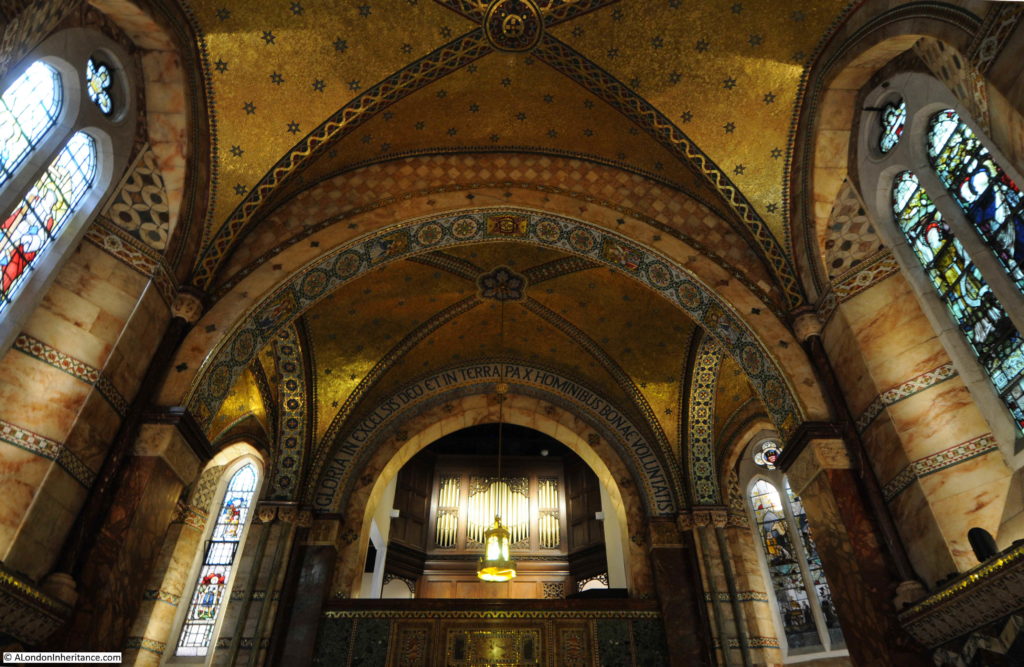 The vestibule between the entrance to the chapel and the nave is lined with plaques recording the names of those who donated towards the costs of the chapel, eminent hospital staff, as well as hospital staff who died on duty, including nurses such Dorothy Adams, Maudie Mason, and Grace Briscoe who died from influenza and scarlet fever in 1919. 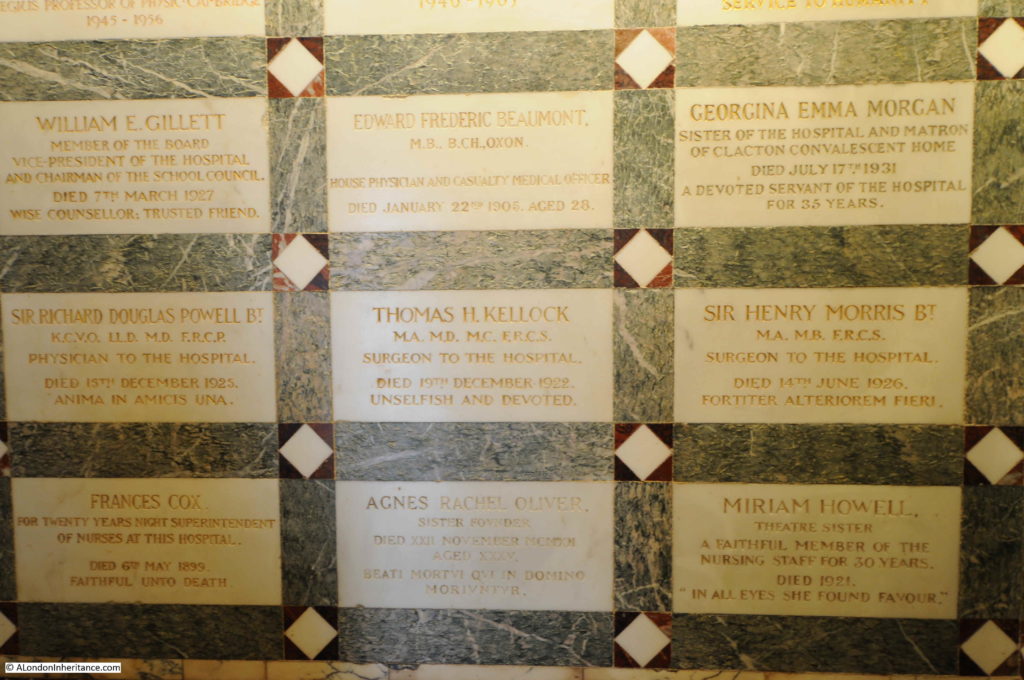 There are also plaques commemorating John and Frank Loughborough Pearson, the architects of the chapel. 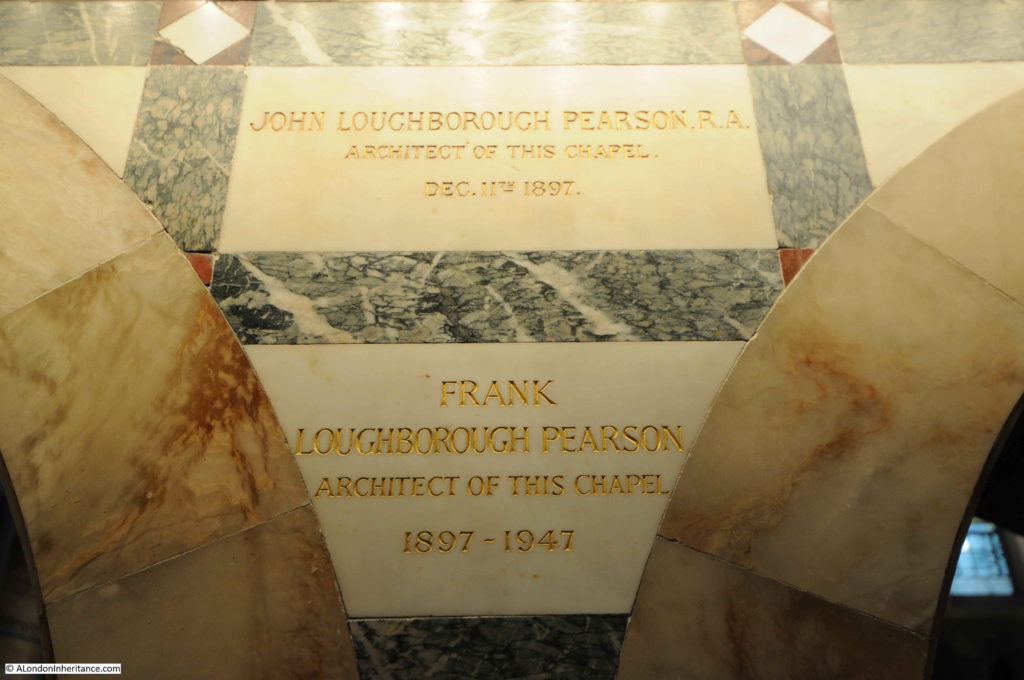 The central square of Fitzroy Place, in which the chapel is located, is called Pearson Square, after the architect(s) of the chapel.

From the 1980s onward, the functions of the Middlesex Hospital were gradually relocated to other London hospitals, with final closure of the site in 2005 when the remaining services were moved to University College Hospital.

The site was sold off for private development, and with the exception of the chapel which was Grade II listed, the entire hospital was demolished in 2008, leaving a large expanse of land with the chapel at the centre. The financial crash of 2008 delayed redevelopment of the site, which was finally commenced in 2011.

As with any large development in London during the last few decades, development included going down as well as up, and the space for four floors of car parking and other facilities was excavated around the chapel, which was underpinned and supported on piers to protect the structure of the chapel.

A condition of Westminster City Council’s planning permission for the overall site was that the developers would fund the restoration of the chapel, which had deteriorated as the hospital gradually contracted and closed. Following restoration, the chapel opened in 2015, having also been transferred to an independent charitable foundation, the Fitzrovia Chapel Foundation to maintain, preserve and run the chapel. It is now open for public viewing on  Wednesday’s, as well as being available for hire for secular wedding ceremonies (I assume because the chapel was dedicated rather than consecrated), exhibition space, private functions etc.

At the time of redevelopment of the site and restoration of the chapel, there was a campaign to retain the name of the Middlesex Hospital Chapel, however this original name probably did not fit with the developer’s intentions for the branding of the new development. The Middlesex Hospital Chapel became the Fitzrovia Chapel to reflect the wider area of Fitzrovia, rather than the old hospital.

I am no expert, but it does seem a trend of the last few decades where public institutions are gradually dispersed allowing a central site to be closed and sold off. Middlesex Hospital had been in operation for over two hundred years and had built up a long tradition of expertise, team work and institutional memory – things which take many years to develop, but are quickly lost and almost impossible to replace.

The Fitzrovia Chapel is all that is left to recall the hospital that once occupied the wider site for over two hundred years. Although it has a new name, hopefully, it will always be the Middlesex Hospital Chapel.

26 thoughts on “Fitzrovia Chapel or the Middlesex Hospital Chapel”