If you visit Bankside today, by far the main attraction is the reconstruction of Shakespeare’s Globe Theatre, however I would argue that there is a far more important historical building right next door to the Globe.

The following photo was taken by my father in 1947 and shows Cardinal Cap Alley. The building on the left of the alley is No. 49 Bankside, a building that exists to this day and has somehow managed to survive the considerable rebuilding along Bankside, and whilst having a well documented history, No. 49 also pretends to be something which it is not. 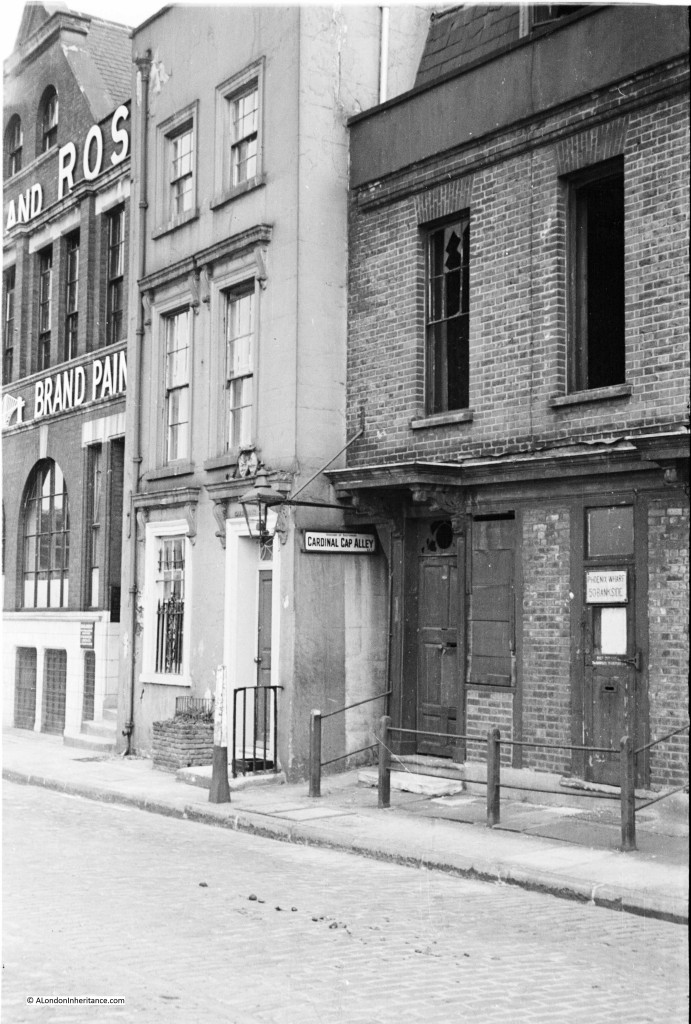 In the above photo, No. 49 and Cardinal Cap Alley are between one of the many industrial buildings along Bankside (Craig & Rose, paint manufacture’s ) and a short terrace of houses that were damaged by bombing in the last war.

The following photo is my 2015 view of the same area and shows No. 49 and Cardinal Cap Alley are now in between the Globe and the rebuilt terrace of houses, which were also reduced from three down to two houses in the post war reconstruction. 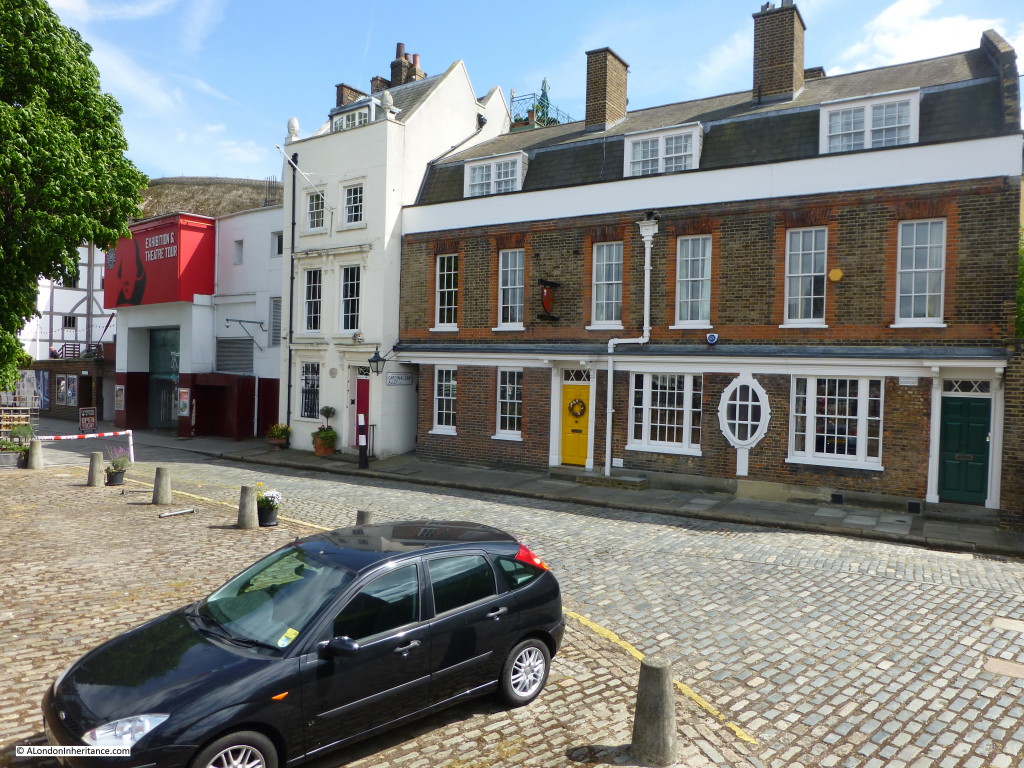 Cardinal Cap Alley and No. 49 have a fascinating history that tell so much about how Bankside has changed, and also how the history of the site can be traced to what we see along Bankside today.

As a starter, the following is from the London County Council Survey of London, Volume XXII published in 1950:

“The name Cardinal’s Hat (or Cap), for a house on the site of the present No. 49 Bankside, and for the narrow alley which runs down beside it, dates from at least the time of Elizabeth and perhaps earlier. The suggestion that it was named in compliment to Cardinal Beaufort is attractive but untenable, for Beaufort died in 1447, and the original Cardinal’s Hat was not built till many years later.

The site was described in 1470 as “a void piece of ground”. It is possible that it was named after Cardinal Wolsey who was Bishop of Winchester from 1529-30, although no buildings are mentioned in a sale of the site from John Merston, fishmonger, to Thomas Tailloure, fishmonger in 1533. Stowe lists the Cardinal’s Hat as one of the Stewhouses but he may possibly have been mistaken, including it only because it was one of the more prominent inns on Bankside in his day.

It is shown in the Token Book for 1593 as in occupation of John Raven and as one of a group of houses which in the book for 1588 is described as “Mr. Broker’s Rentes”. Hugh Browker, later the owner of the Manor of Paris Garden, was in possession of ground there in 1579 and it seems likely that he was responsible for the formation of Cardinal’s Cap Alley if not for the building of the original house.

Thomas Mansfield was the tenant of the inn when Edward Alleyn dined there with the “vestrye men” of St. Saviour’s parish in December 1617.

A few years later John Taylor, the water poet makes reference to having supper with “the players” at the Cardinal’s Hat on Bankside. Milchisedeck Fritter, brewer, who tenanted the house from 1627 to 1674 issued a halfpenny token. He was assessed for seven hearths in the hearth tax rolls.

The freehold was sold by Thomas Browker to Thomas Hudson in 1667. The later died in 1688 leaving his “messuages on Bankside” to his sister Mary Greene, with reversion to his great nieces Mary and Sarah Bruce. It was at about this date that the older part of the present house was built. During the 18th century it was bought by the Sells family who both owned and occupied it until 1830. in 1841 Edward Sells of Grove Lane, Camberwell, bequeathed his freehold messauge and yard and stables, being No. 49 Bankside, then in the tenure of George Holditch, merchant, to his son, Vincent Sells. The house is now owned by Major Malcolm Munthe. It has previously been occupied by Anna Lee, the actress.”

Although today the main Bankside attraction is the adjacent Globe Theatre, what does draw the attention of visitors to Bankside is the old looking plaque on No.49 with ornate script stating that Sir Christopher Wren lived in the building during the construction of St. Paul’s Cathedral and that Catherine of Aragon took shelter in the building on her arrival in London. This can be seen to the left of the doorway to No. 49 in my 2015 photo. 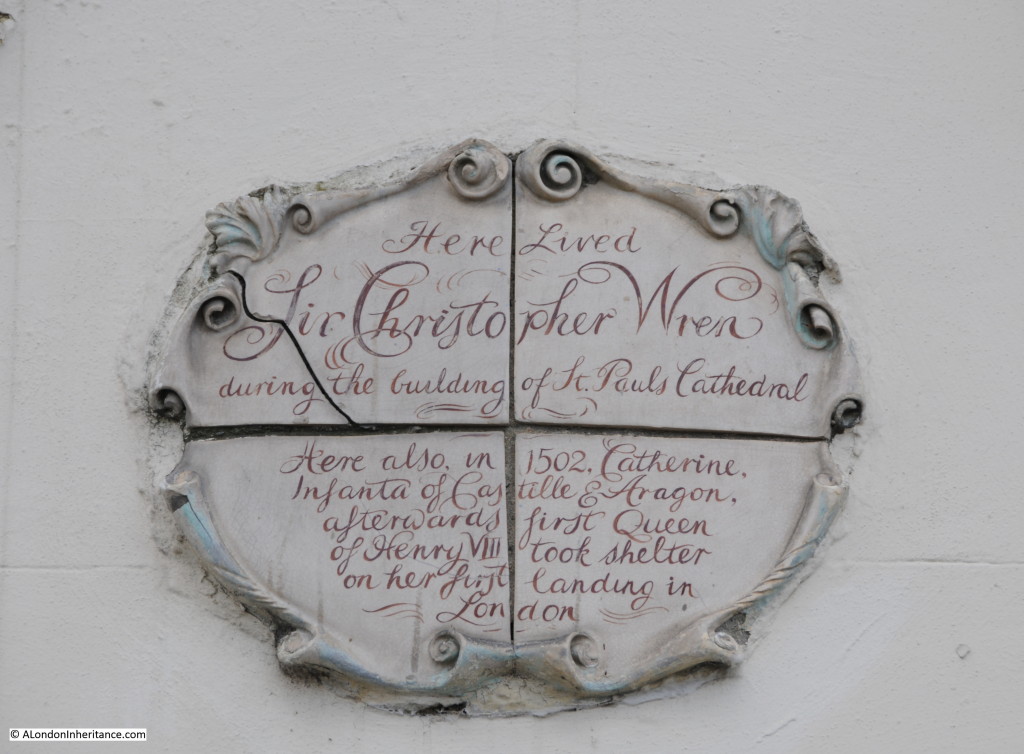 But a close-up of the 1947 photo shows no evidence of the plaque to the left of the door and there is no mention of it in the 1950 Survey of London. 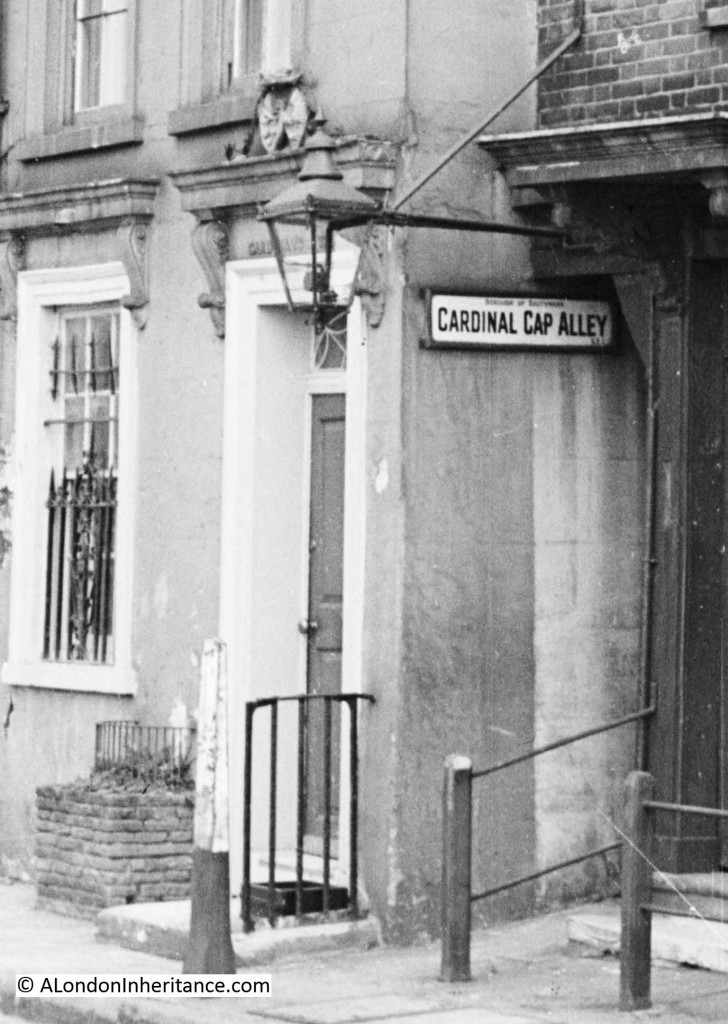 The origin of this plaque is documented in the really excellent book “The House by the Thames” by Gillian Tindall.

As the name suggests, the book is about the history of No. 49 Bankside, the occupiers of the house and the industries around Bankside. It is one of the most interesting and well researched accounts of a single house and its’ surroundings that I have read.

In the book, Tindall confirms that the plaque is a mid 20th Century invention. Malcolm Munthe, who purchased the house just after the end of the war, probably made the plaque himself and installed on the front of the house. There was a plaque on a house further up Bankside, claiming the occupancy of Wren, however this house was pulled down in 1906.

A close-up of Cardinal Cap Alley and the entrance to No. 49, showing the Wren plaque to the left of the door. 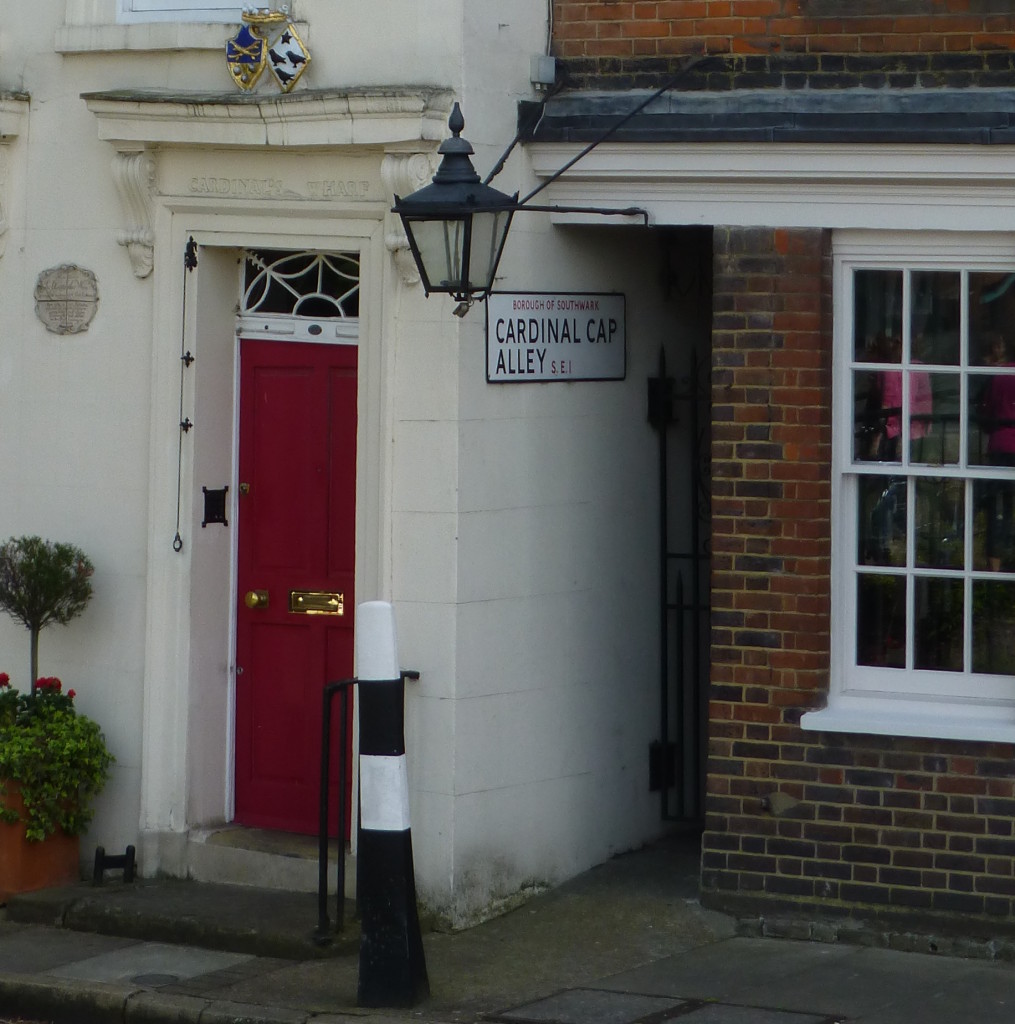 Also note that Cardinal Cap Alley is now gated. This use to be freely accessible and I took the following photo from inside the alley in the 1970s. Could not deal with the contrasting light very well, I was very young and this was with a Kodak Instamatic 126 camera – my very first. 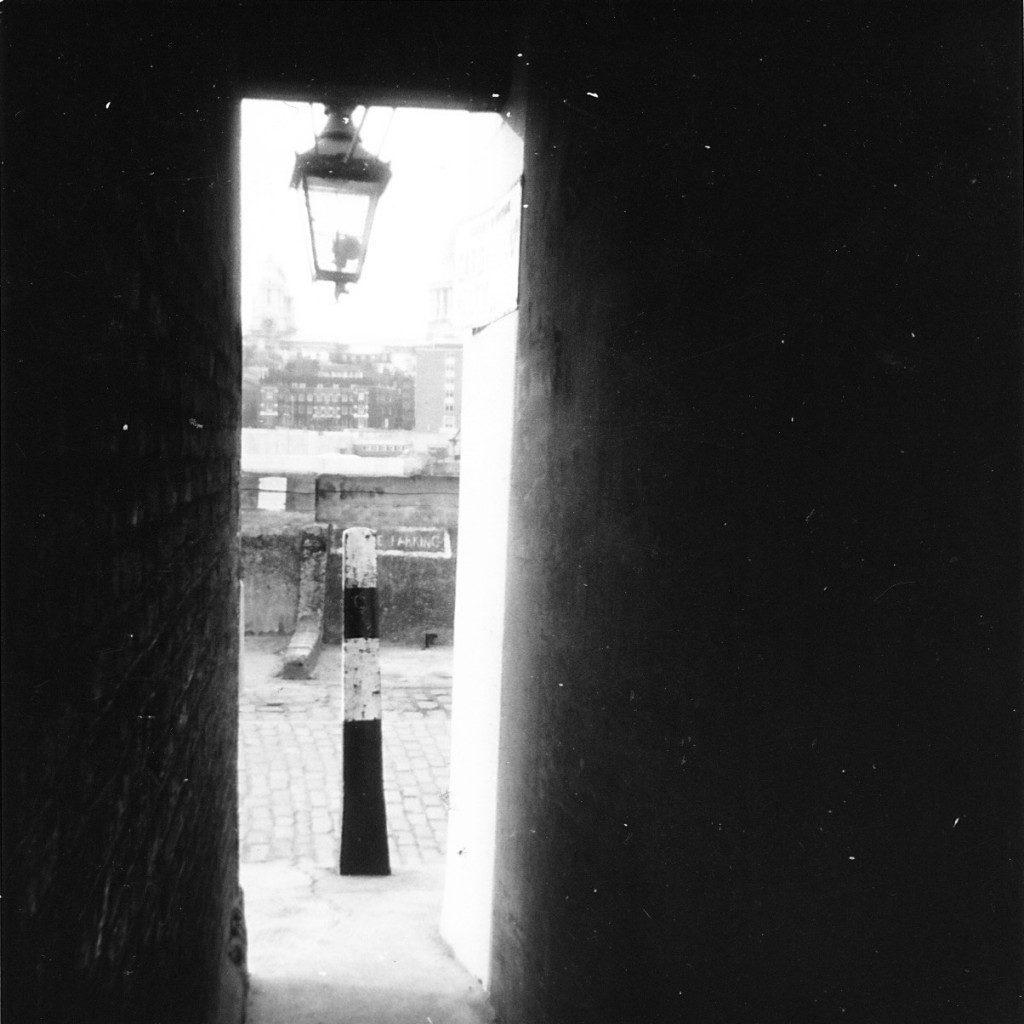 I am very grateful to Geraldine Moyle who sent me the following photo taken in 1973 looking down into Cardinal Cap Alley: 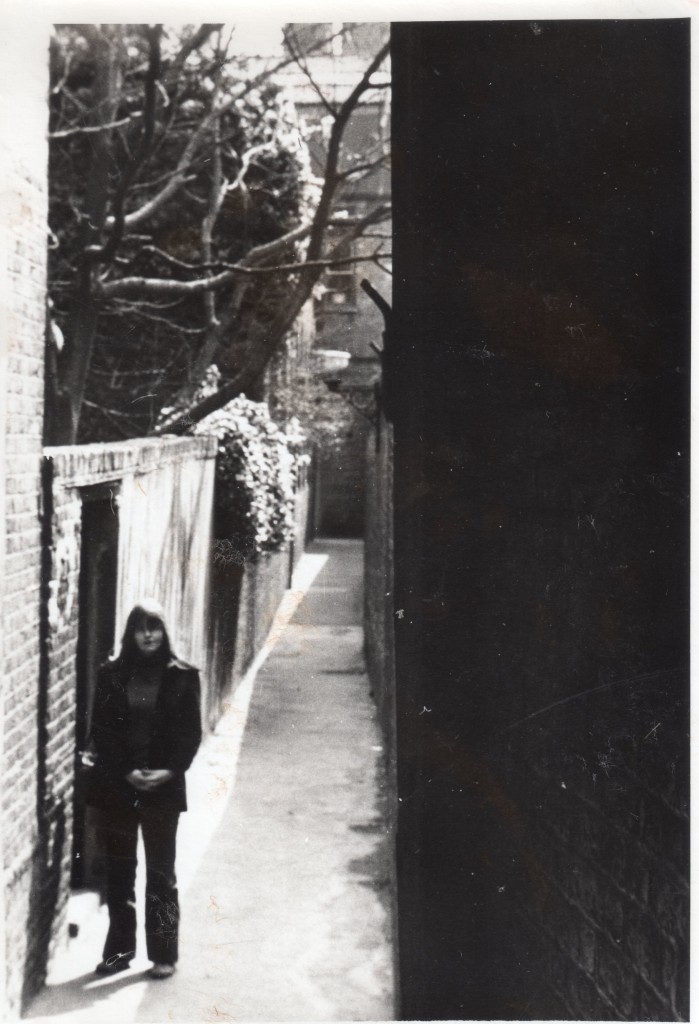 The garden of No. 49 is on the left. Just an ordinary alley, but so typical of all the alleys that would have run back from the water front, between the houses that faced the river.

Tindall’s book runs through the whole history of No.49 and demonstrates how the history of a specific site over the past centuries has influenced the site to this day.

The occupiers of No. 49 and the adjacent buildings ran the ferry boats across the river, were lightermen and watermen and then moved into the coal trade. The Sell’s family who lived in the house for a number of generations, and who built a very successful coal trading business, finally merging with other coal trading companies to form the Charrington, Sells, Dale & Co. business which generally traded under the name of Charrington (a name that will be very familiar to anyone who can remember when there was still domestic coal distribution in the 1960s and 1970s).

How the history of Bankside has evolved over the centuries:

– the original occupations of many Bankside residents of ferrymen, lightermen and watermen. Working on the River Thames with the transportation of people and goods.

–  as the transport of coal became important to London, the development of many coal trading businesses along Bankside, including that of the Sell’s family

– the local coal trading led to the development of coal gas and electricity generation plants at Bankside (the Phoenix Gas Works are shown on the 1875 Ordnance Survey map covering the west side of the current Bankside Power Station / Tate Modern.)

– the first electricity generating plant being replaced by the Bankside Power Station that we see today and is now Tate Modern.

“And this is why at the end of the twentieth century, a huge and distinctive brick red building was there to make an iconic focus for the regeneration of a Bankside from which industrial identity had by then fled.

Thus do patches of London’s ground, which are nothing in themselves but gravel and clay and river mud, and the ground down dust of brick and stone and bones, wood and wormwood and things thrown away, acquire through ancient incidental reasons a kind of genetic programming that persists through time”

This last paragraph sums up my interest in the history of London far better than I could put into words.

I really do recommend “The House by the Thames” by Gillian Tindall.

Going back to 1912, Sir Walter Besant writing in his “London – South of the River” describes Bankside at the height of industrialisation:

“Bankside is closely lined with foundries, engineering shops, dealers in metals, coke, fire-brick, coal, rags, iron and iron girders. the great works of the City of London Electric Lighting Corporation, which lights the city, is also here. On the river-side is a high brick building containing the coal-hoisting machinery. All is automatic; the coal is lifted, conveyed to the furnaces, fed to the fires, and the ashes brought back with hardly any attention whatever, at an immense savings of labour.”

Standing in Bankside today, the area could not be more different.

Another view of No. 49 Bankside. The street in front of these buildings is the original Bankside. As can just be seen, this comes to an abrupt stop due to the land beyond being occupied by the Bankside Power Station complex. It is perhaps surprising that N0.49 and Cardinal Cap Alley have survived this long given the considerable redevelopment along this stretch of the river. It is ironic that perhaps the false plaque claiming Sir Christopher Wren’s occupancy may have contributed to the survival of the building during the last half of the 20th century. 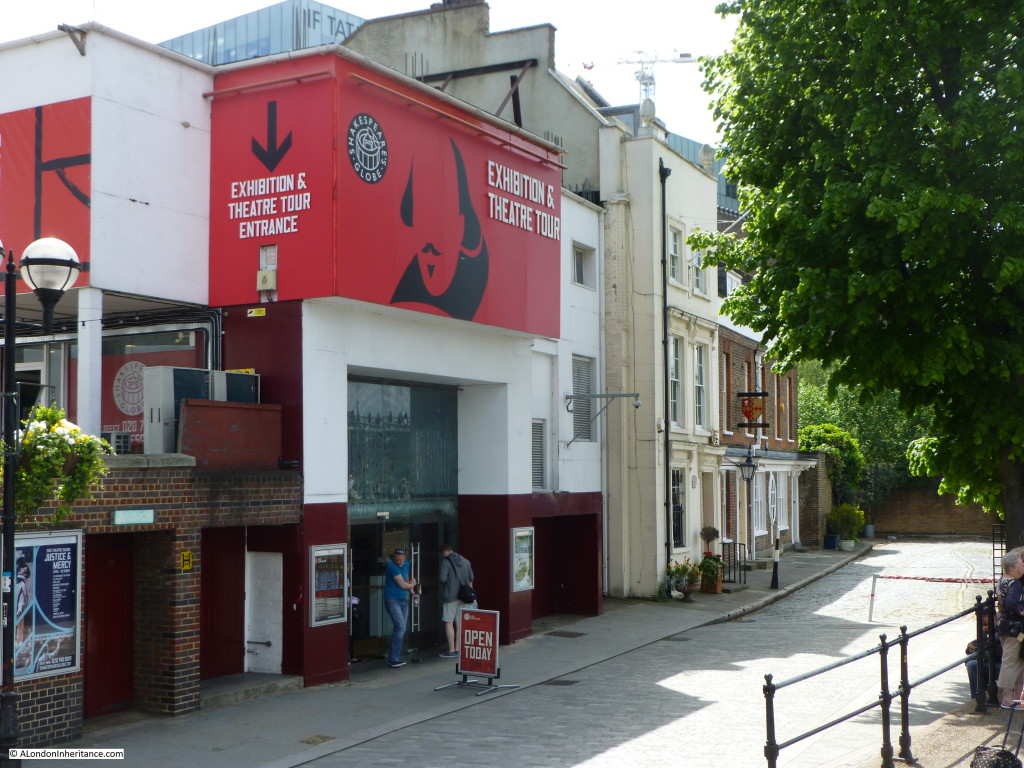 My father also took a photo from Bankside across the river to St. Paul’s Cathedral. The larger ship traveling from left to right is the Firedog, owned by the Gas Light & Coke Company. Originally founded in 1812, the company had a fleet of ships to transport coal to the gas works it operated around London (this was before “natural” gas was discovered in the North Sea. Prior to this, gas was produced from coal). The Gas Light & Coke company absorbed many of the smaller companies across London before being nationalised in 1948 as a major part of North Thames Gas, which was then absorbed into British Gas. 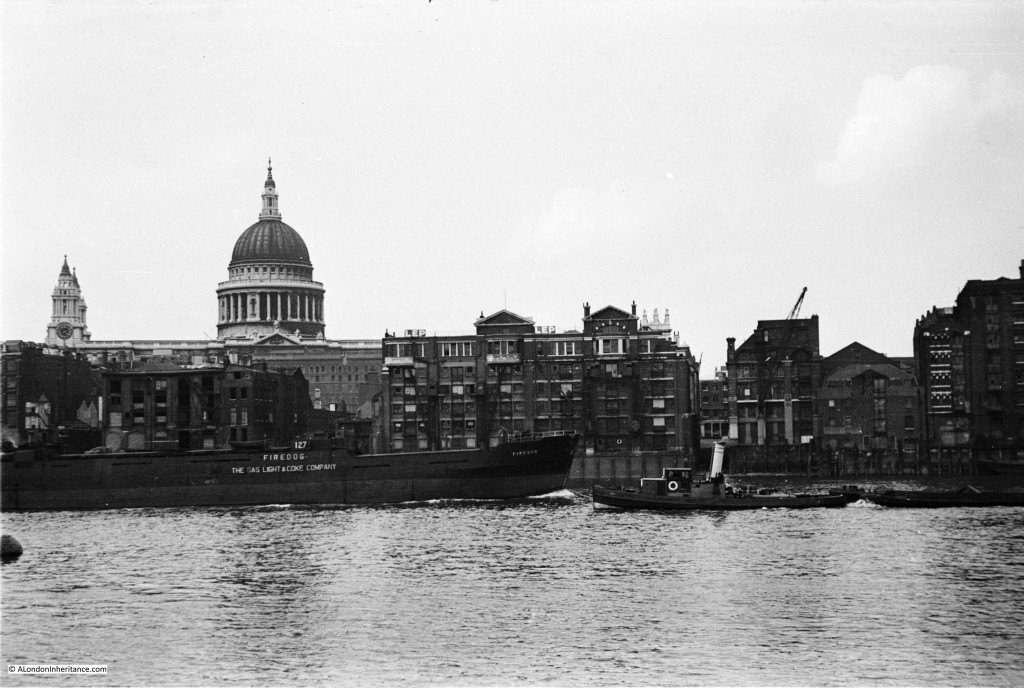 The same view in 2015. The only building on the river front to have survived is the building on the far right.  Note the building in the middle of the 1947 photo. This is the head office of LEP (the letters can just be seen on the roof), the company that operated the last working crane on the Thames in central London, see my earlier post here. It is really good to see that the height of the buildings between the river and St. Paul’s are no higher today than they were in 1947. A very positive result of the planning controls that protect the view of the cathedral. 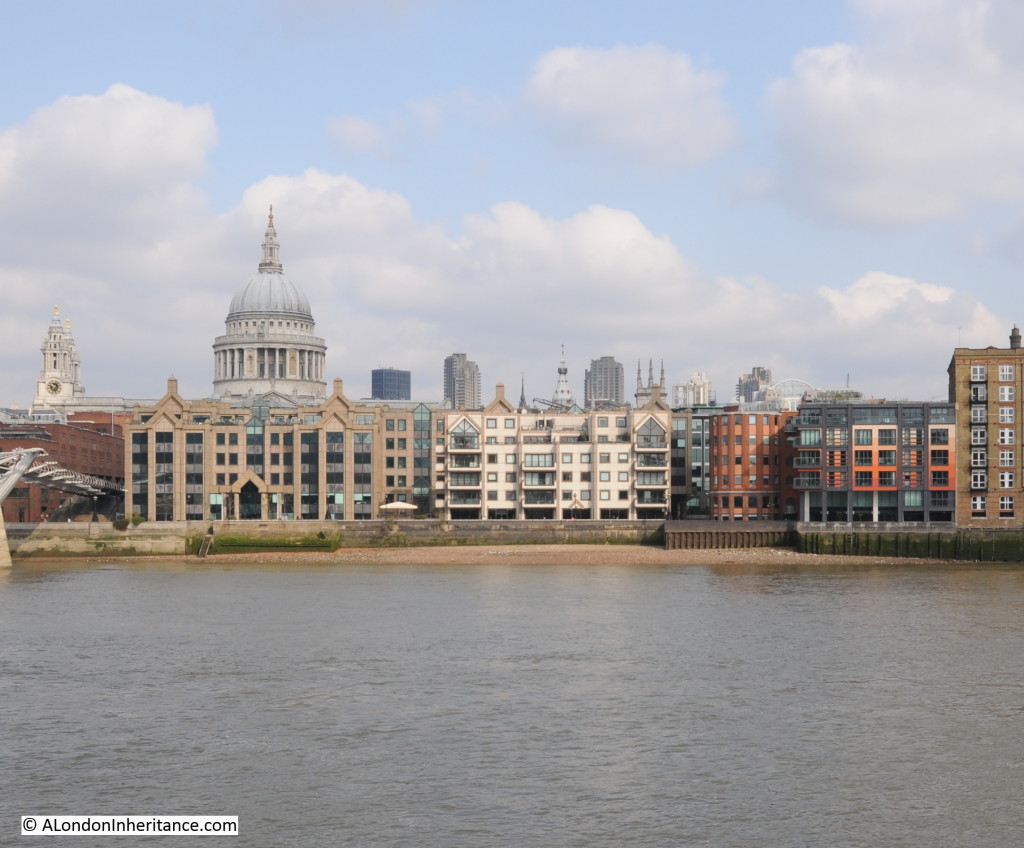 There is one final reminder of Bankside’s past. Walk past the Globe and on the side of a modern building with a Greek restaurant on the ground floor is the Ferryman’s Seat: 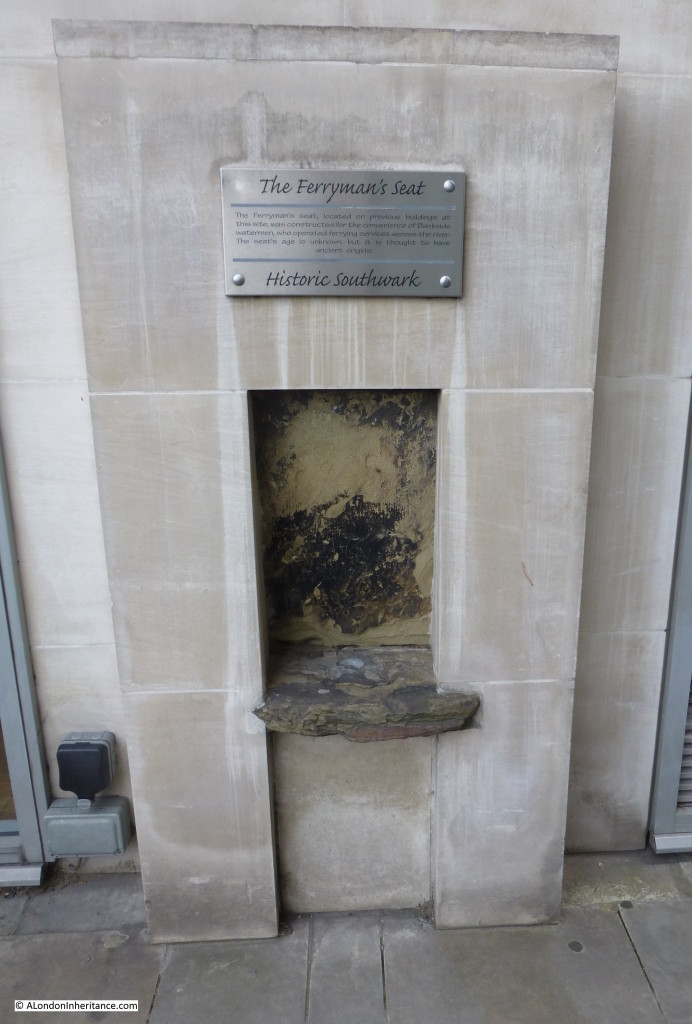 “The Ferryman’s seat, located on previous buildings at this site was constructed for the convenience of Bankside watermen who operated ferrying services across the river. The seat’s age is unknown, but it is thought to have ancient origins.”

Although there is no firm evidence of the seat’s antiquity, the 1950 Survey of London for Bankside includes a drawing of the seat in the building on the site at the time and states that “Inserted in a modern building at the corner of Bear Gardens and Bankside is an old stone seat said to have been taken from an earlier building and to have been made for the convenience of watermen.” 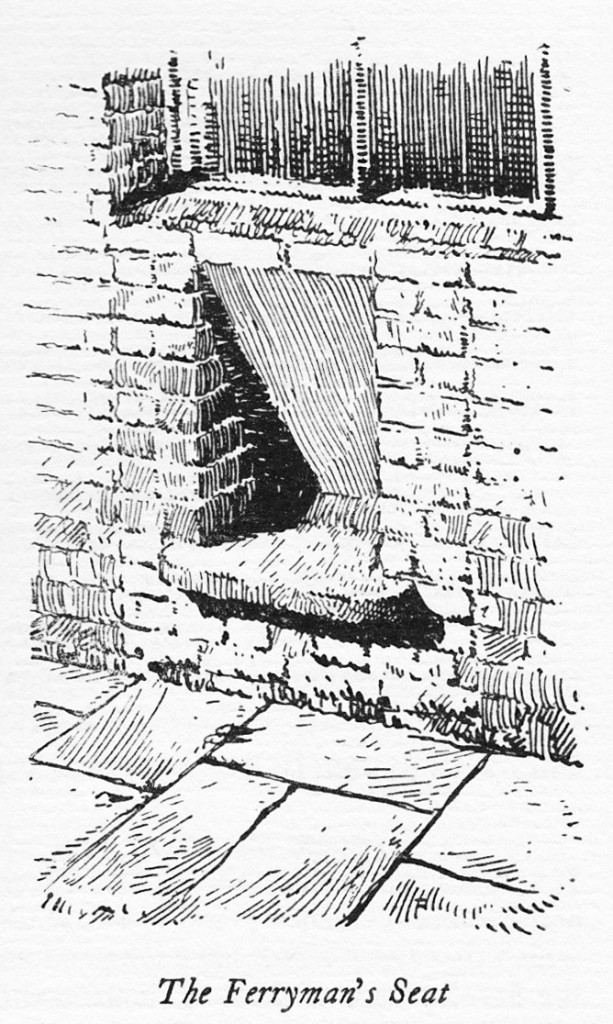 Read Gillian Tindall’s book, then visit Bankside. Ignore the crowds around the Globe and reflect on Cardinal Cap Alley, No. 49 and the lives of countless Londoners who have lived and worked on Bankside over the centuries.

29 thoughts on “Cardinal Cap Alley And No. 49 Bankside”