I have touched very briefly on Wapping Old Stairs in a previous post, when I went for a walk along Wapping High Street and Wapping Wall. I am returning to the stairs as when working through the photos my father had taken on a boat trip along the Thames in August 1948, I found one of Wapping Old Stairs and the adjacent Oliver’s Wharf. 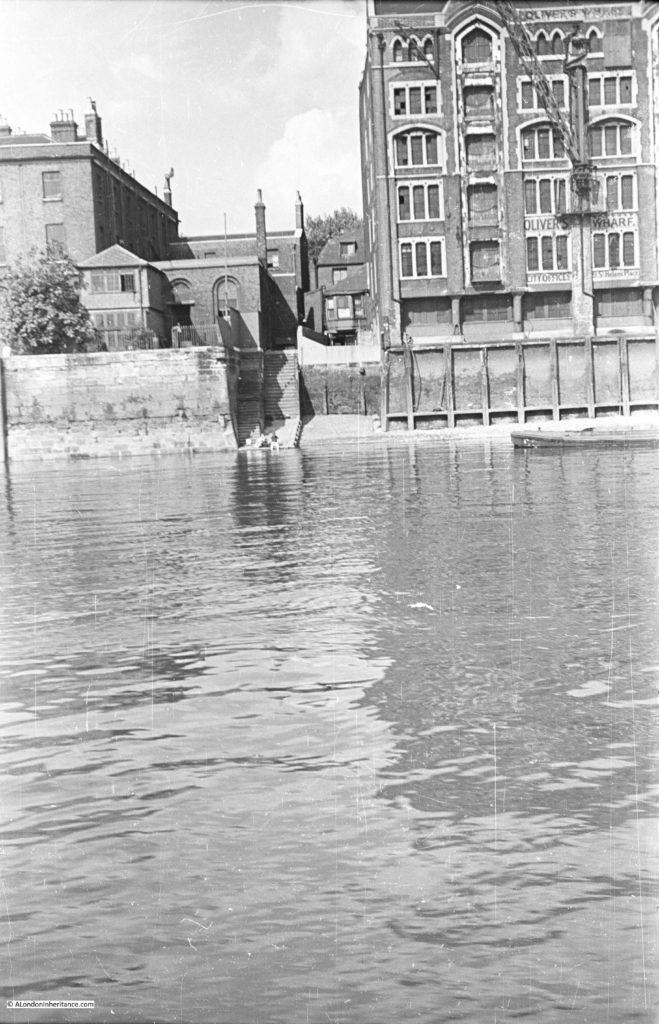 I tried to take a photo of the same view when out on the river a couple of months ago, but failed completely to get as good a photo as the one above.

The following photo is the area today. Oliver’s Wharf is the building on the right, the stairs are to the left of Oliver’s Wharf. 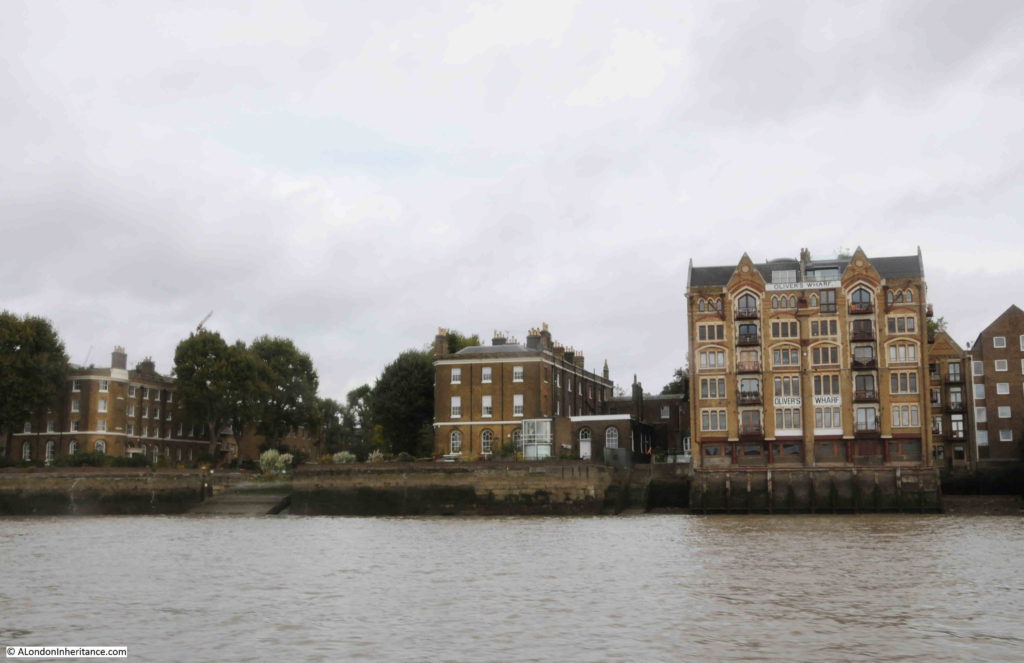 What I love about these photos is that they frequently show people, often children, on the stairs (for example, see the post on Emerson Stairs), and this includes the photo of Wapping Old Stairs, see the following enlargement from the original which shows two children at the bottom of the stairs. 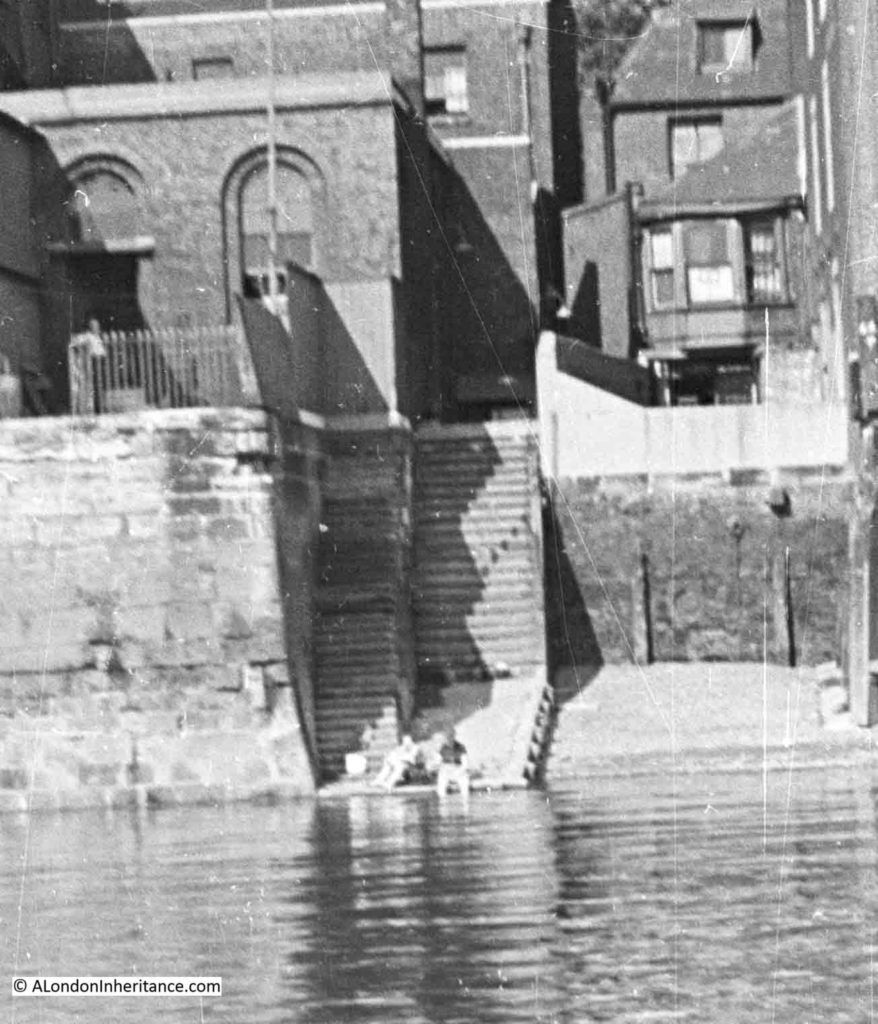 Wapping Old Stairs are – old. There is the possibility that stairs at this location date back to the 16th century or earlier. The first newspaper reference I can find is from the 12th August 1736 when “The Body of a young Man well dressed, with a Watch and a Sum of Money in his Pockets, was taken up floating at Wapping Old Stairs: Upon fetching him he appeared to be an Apprentice belonging to Mr. Stilton, a Currier in Bermondsey-street; but by what Means he came drowned is very uncertain.”

This report confirms that in 1736 they were called the “Old” stairs. This part of the name was used to separate these stairs from another set of stairs built slightly to the east along the river, which were called Wapping New Stairs (these can also be found today). 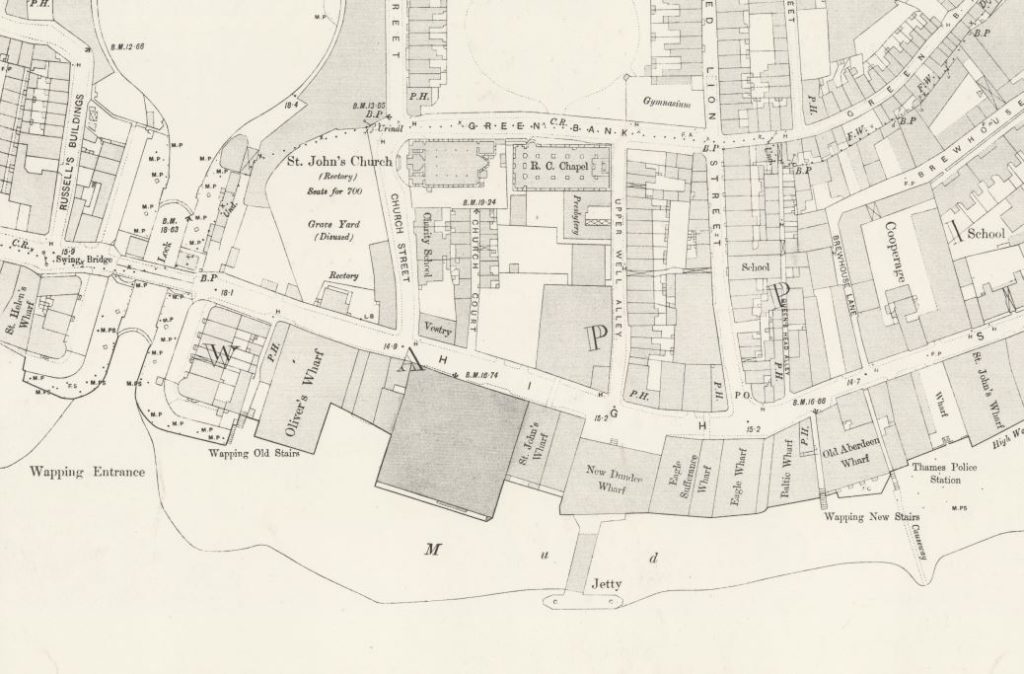 So presumably Wapping Old Stairs were the original stairs, and Wapping New Stairs came latter, with the old and new being added to uniquely identify the stairs. This method of identifying stairs can be found in the names of a number of Thames stairs, for example I have already written about Horselydown Old and New Stairs.

Despite being called “New”, Wapping New Stairs are also old, and I found a newspaper reference to them a couple of years before that for Wapping Old Stairs, when, from the 28th December 1728:

“On Monday, between one and two in the Morning, a Fire was discovered at the Waterman’s Arms Ale-House near Wapping New Stairs, and by timely assistance was quenched, having only burnt some Apparel and a Chest, on which the Servant Maid of the House had stuck a Candle, but had fallen asleep and left it burning.”

The number of fires in the timber buildings along the river was considerable, and a regular occurrence. In the same newspaper was another report of a fire at the nearby Gun Dock:

“Yesterday Morning early, a Fire broke out at a Hatter’s near Gun Dock in Wapping, which in a short space consumed the same, and three other Houses adjoining to it: In one of the Houses a Man and three Women went upstairs to save some Goods, but were prevented by the Flames from getting down again: one was saved by escaping over the Tops of some Houses, and the three Women flung themselves out of a Window into the street but one of them (a Servant Maid) pitched on her Head and died on the Spot.”

Both stairs therefore date from at least the early 18th century, with Wapping Old Stairs almost certainly being of a much earlier date.

Both stairs also feature on the 1746 Rocque map. The following extract shows Wapping Old Stairs to the right of the map (the new stairs are also on the map, but on a separate page in my copy of Roque’s maps). 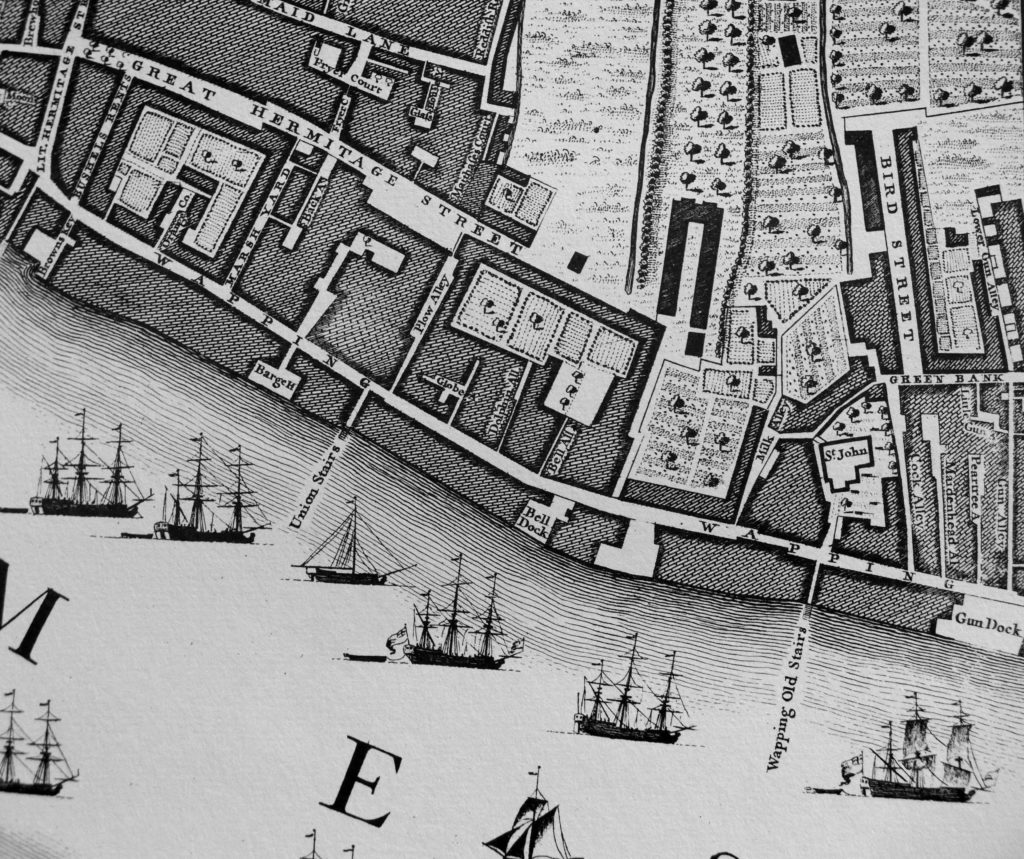 Thames stairs provide a useful geographic reference point to events on the river, and newspapers from the early 18th century onward are full of reports of bodies being found, arrivals and departures, crime, lost goods, arriving and departing ships etc.

One report from the 28th October 1738 gives an idea of the types of exotic goods that were arriving at Wapping in the 18th century:

I suspect that 200 lbs of Venice Glass would indeed be a rich capture. What the report does not help with is why they were in the river – lost while transferring from river to land, or perhaps hidden in the river by a thief, ready for later recovery.

Thames river stairs are rich sources of history for that part of London that forms the boundary between river and land (see my post on Life and Death at Alderman Stairs, where I explored in more detail the history of one set of Thames stairs).

Wapping Old Stairs also probably has more cultural references than the majority of other river stairs.

Wapping Old Stairs was the title of a Comic Opera at the Vaudeville Theatre in 1894: 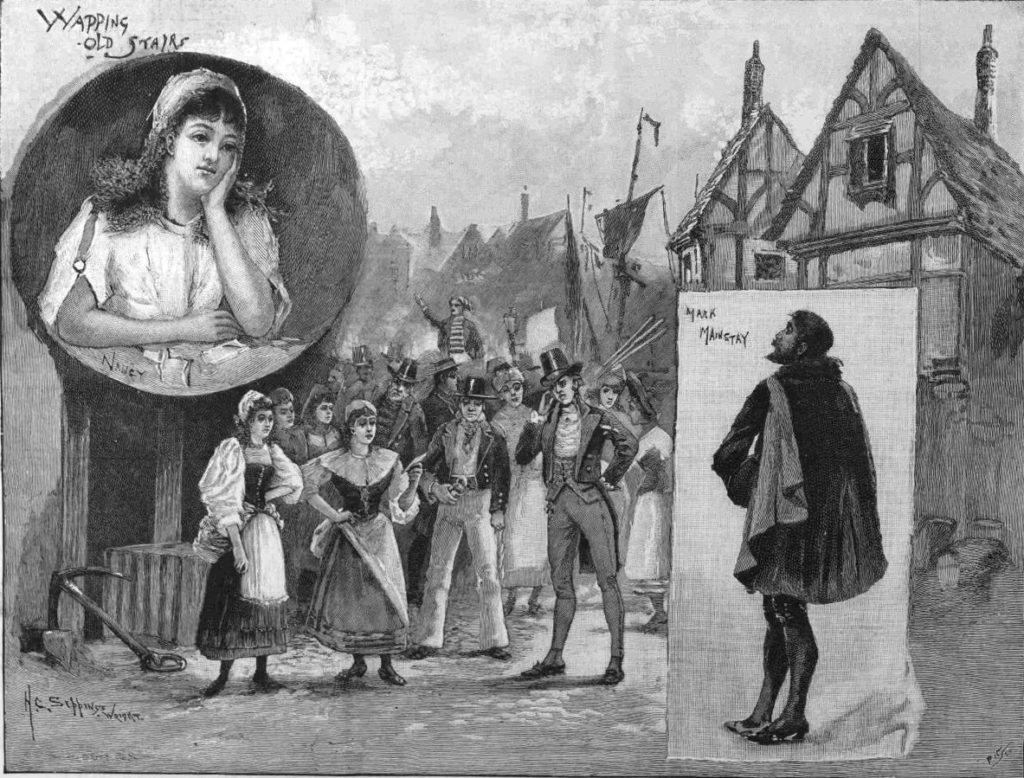 The St. James’s Gazette review of the play, which had a rather serious subject for a comic opera:

“The author and composer of ‘Wapping Old Stairs’, the new opera or operetta produced at the Vaudeville on Saturday night, may be congratulated on having achieved a genuine musical and dramatic success. There is but little of the spectacular element in the piece; the same set scene does duty throughout, and almost the only dresses are those of sailors and of their constant associates, ‘the merry maids of Wapping’. The eminent musician in using for his score the old melody of ‘Wapping old Stairs’ , which might have been treated with dramatic effect.

Mr Stuart Robertson’s book, with but little dramatic basis is ingeniously constructed, and his lyrics are written with grace and point. It appears that in the last century, or even earlier, two sailors of Wapping fell in love with the same girl; on which the most unscrupulous of the young woman’s admirers committed a murder, and so arranged matters that his rival was looked upon as the assassin and, to save his life, fled to foreign parts. But after the lapse of many years the truth came out; when the good man returned to the land of his birth and the girl of his heart, while the bad man was executed, and after ‘ suspension by the neck’ hung ignominiously in chains.

This story is, no doubt a little tragic for a comic opera, and the librettist, whilst softening its harsher features, has introduced in abundance the element of mirth.”

The Vaudeville Theatre is probably the nearest that most West End theatre goers would get to the realities of life in 19th century Wapping. The review of the play also comments on the execution by hanging, which refers to the practice of hanging criminals along the river and a number of places, including Wapping Old Stairs have been referenced as “Execution Dock”. I suspect no single site was used and a number of locations along the Wapping riverbank would have been used.

The Tatler in 1903 produced the following print to go with a song written by Charles Dibdin which referenced the stairs:

“Your London girls with all their airs

Must strike to Poll of Wapping Stairs

No tighter lass is going

From Iron Gate to Limehouse Hole

Not while the Thames is flowing” 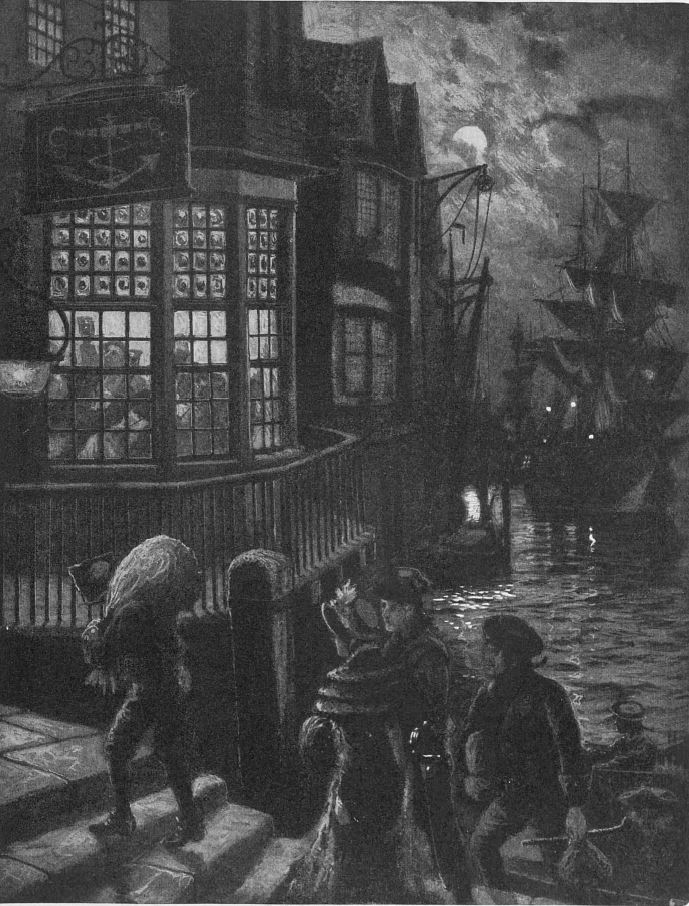 Wapping Old Stairs is reached today, as it has been for many years, by turning off Wapping High Street and walking alongside a pub, which possibly dates back to the 15th Century as the location for a pub. Known from 1533 as The Red Cow, then the Ramsgate Old Town and finally from 1811 as the Town of Ramsgate. This may also date the origins of Wapping Old Stairs as a pub alongside stairs would be ideal for those arriving or departing on the river. 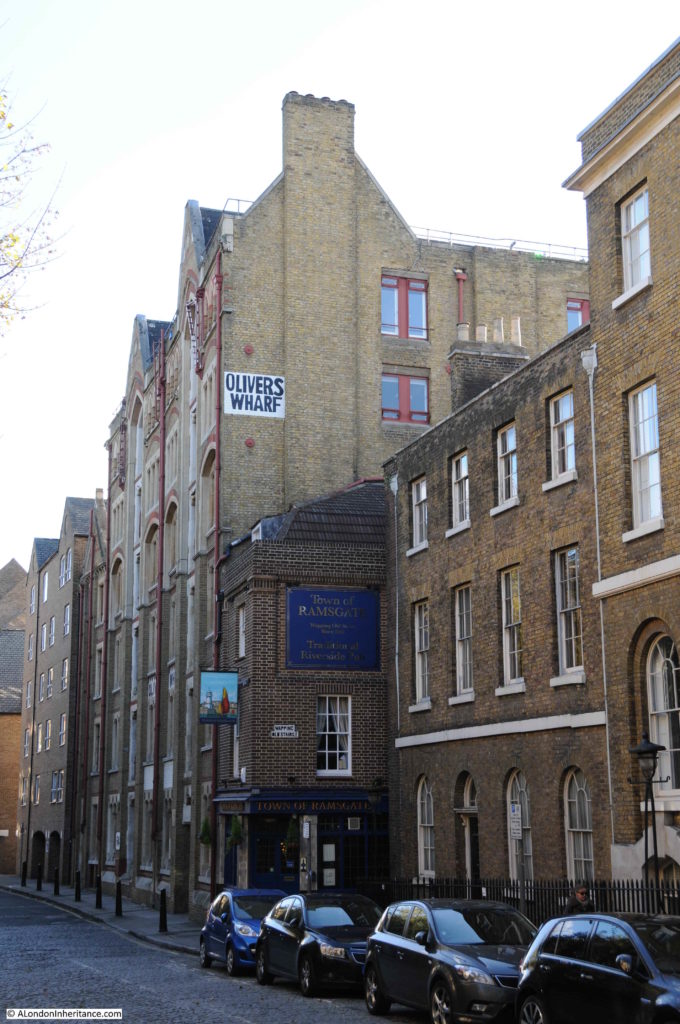 The narrow alley leading to the stairs: 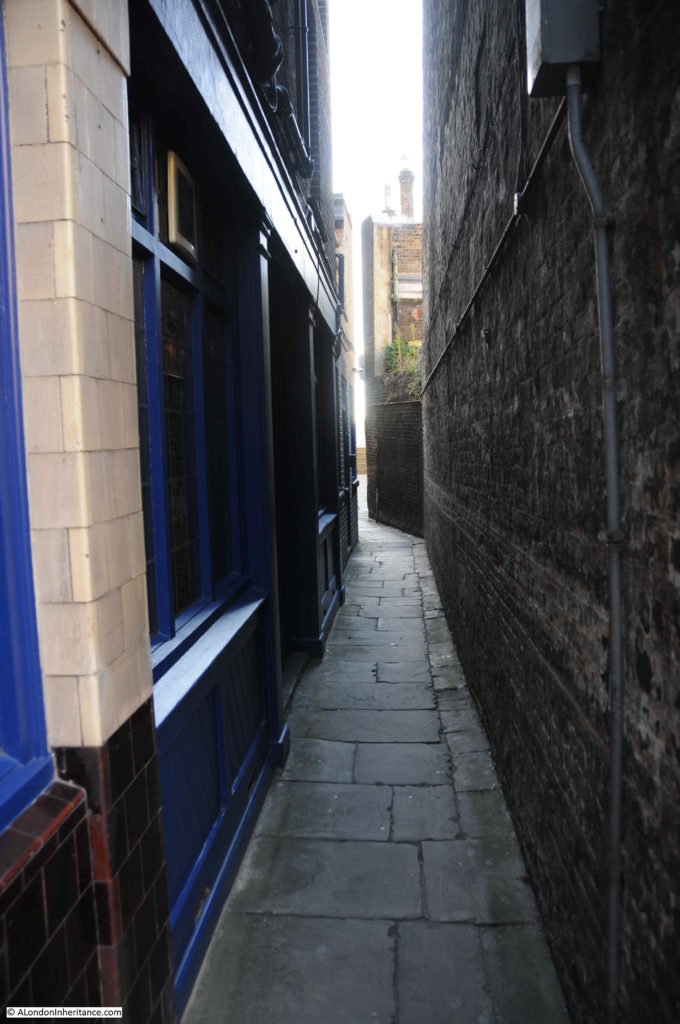 View of the stairs at low tide: 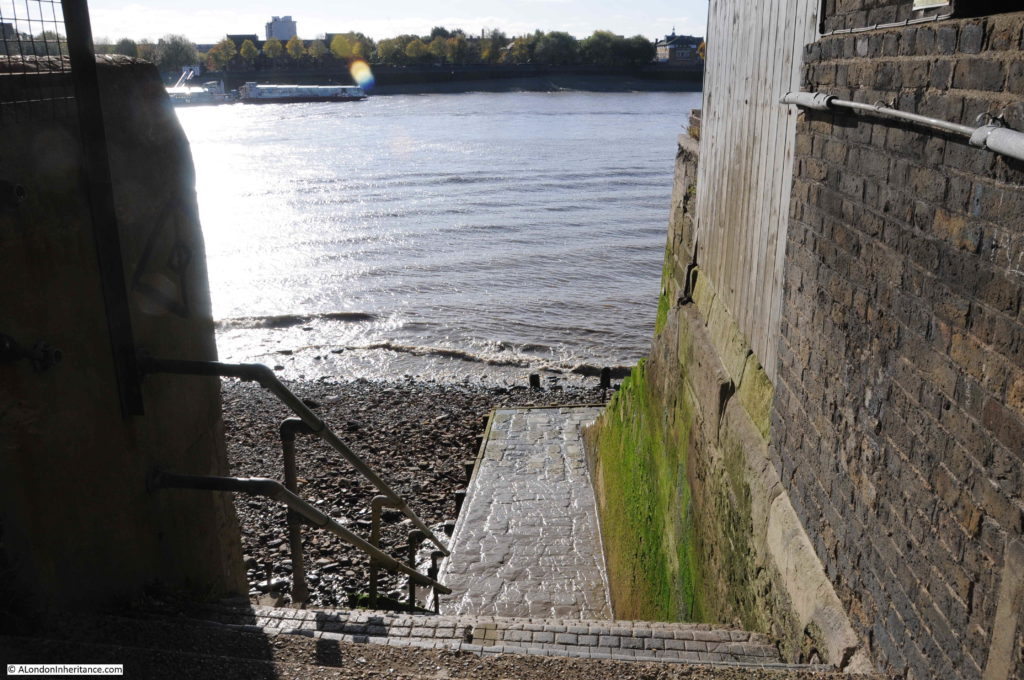 The liquefied mud covering the stairs at low tide does make the stairs a rather risky route down to the foreshore, but once at the bottom, the reward is a superb view along the river. The photo below is the view looking west towards the City. The entrance to what was the London Docks can be seen where the river wall appears to break. 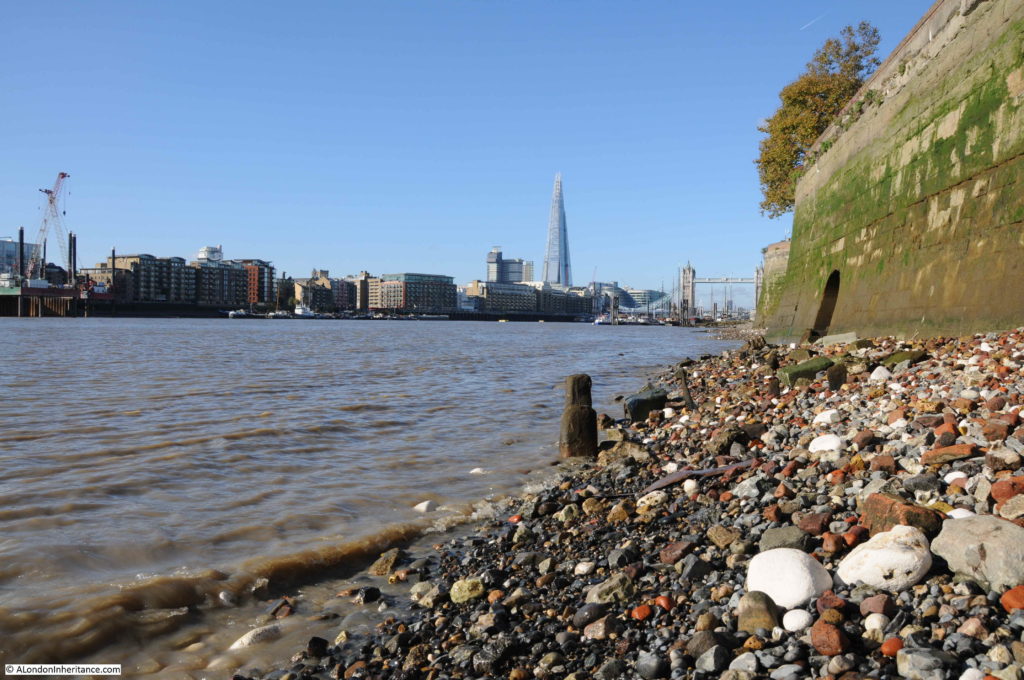 The foreshore is littered with London’s history. Rounded nodules of chalk, once used to provide a flattened base on the foreshore for mooring barges and lighters. The bricks that once built the City and Docks, now broken and worn by a thousand tides.

The distinctive two sets of stairs. I suspect the stairs on the right are the original Wapping Old Stairs, and those on the left were added to provide private access for the buildings on the left, built alongside the entrance to the London Docks. 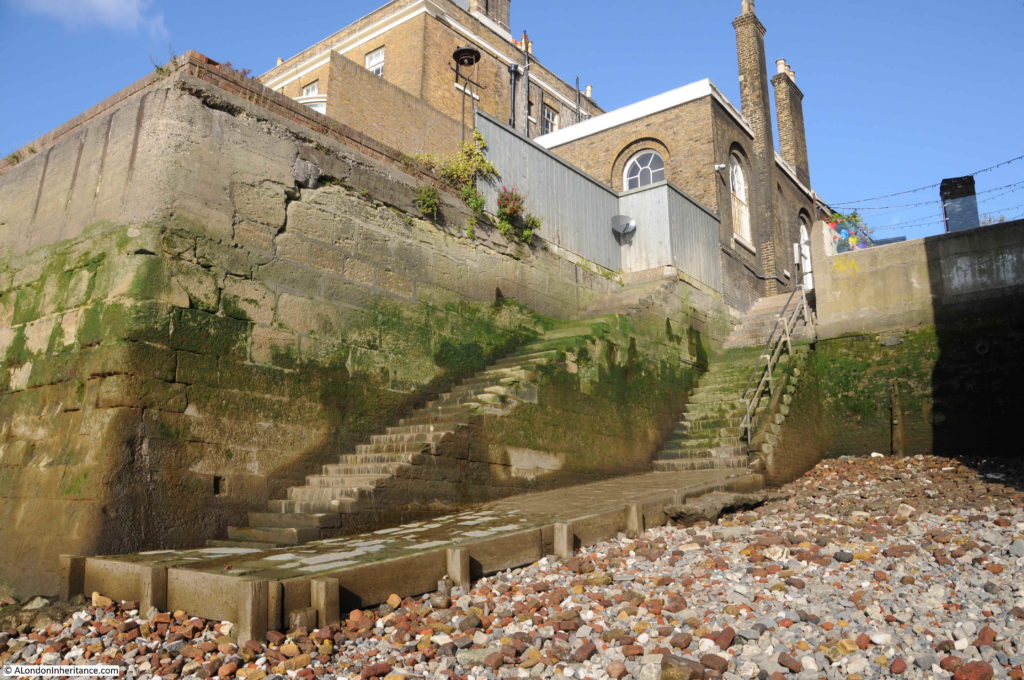 It was at the base of these stairs that the children were sitting in the 1948 photo. Interesting to speculate on the countless thousand who have arrived or departed along these stairs, transported cargo to and from the river, or just sat here and watched the river.

The small dock space to the right of the stairs is much the same as in 1948. 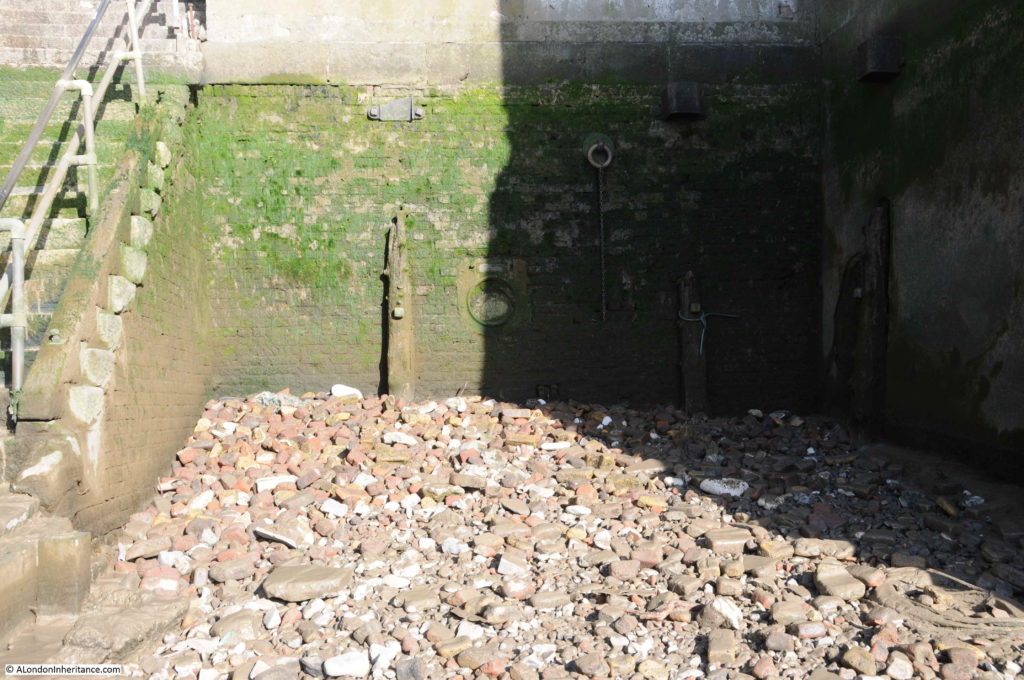 In the centre of the dock wall, at the point between light and shadow in the above photo is a large round pipe that looks to have been filled, above is a manufacturer’s name: 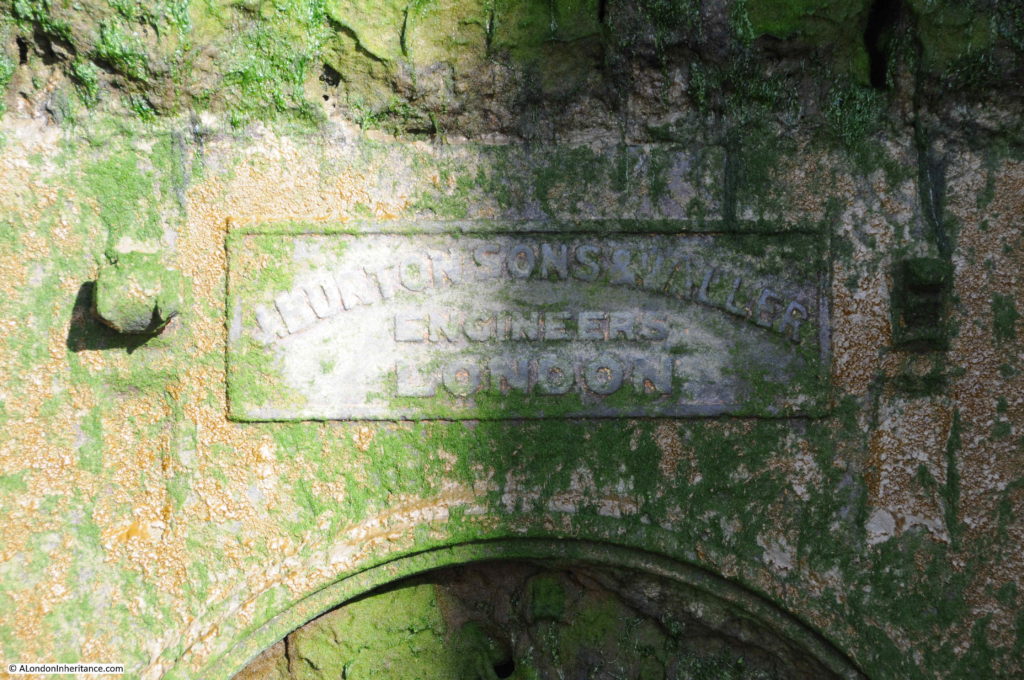 As usual, a brief exploration of part of London’s history, and writing these posts always generates a long list for further research. When were Wapping Old Stairs first used and named, and what part did the stairs play in the development of Wapping. Confirmation of the reason for the double sets of stairs. What did J. Burton Sons & Waller install at Wapping Old Stairs.

For me, the Thames Stairs are where I feel closest to London’s long history in that unique area between the river and the land, and there are many more stairs to explore.