Part of the fun of exploring London is finding things in the most unexpected places. Objects that have survived for many years, long after they finished serving their original purpose, and where modern London has been built around them. I have two examples in today’s post, a Roman Wall in a car park and a Pottery Kiln in Kensington.

The Roman Wall in a Car Park

When the street London Wall was rebuilt after the war from Aldersgate Street to Moorgate, it was widened and built along a new alignment. At the time, the car was seen as the future of transport in London, hence the four lane London Wall, and to accommodate the cars that would need to be parked in the City, the opportunity was taken to build a new underground car park that now runs almost the entire length of the new alignment of London Wall.

When London Wall and the car park was being built in 1957 a length of 64m of Roman wall was discovered. Much of the wall was demolished, but a section was retained and occupies a couple of parking bays within the car park.

The part demolished appears to have been mainly medieval rebuilds of the wall, but there must have been Roman within this wall, and the foundations, so a sad loss.

As you walk along the car park, the wall emerges between pillars 51 and 52: 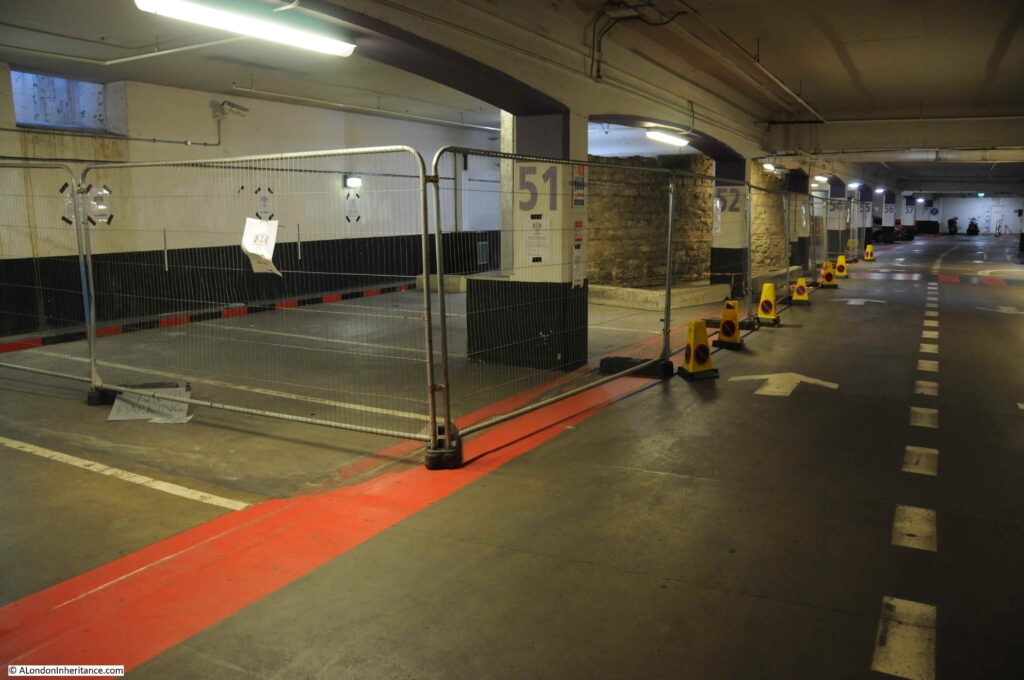 In the following map extract, the red rectangle shows the location of the wall. The car park extends to the left along the full length of the section of London Wall shown in the map  (Maps © OpenStreetMap contributors). 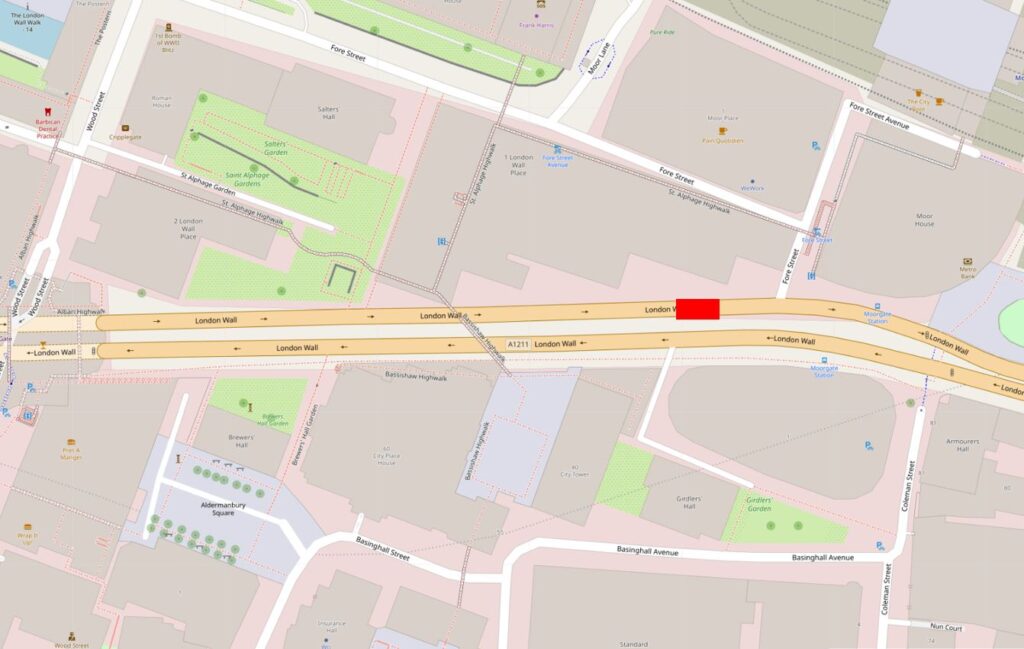 Looking from the side, the wall is at an angle to the wall of the car park: 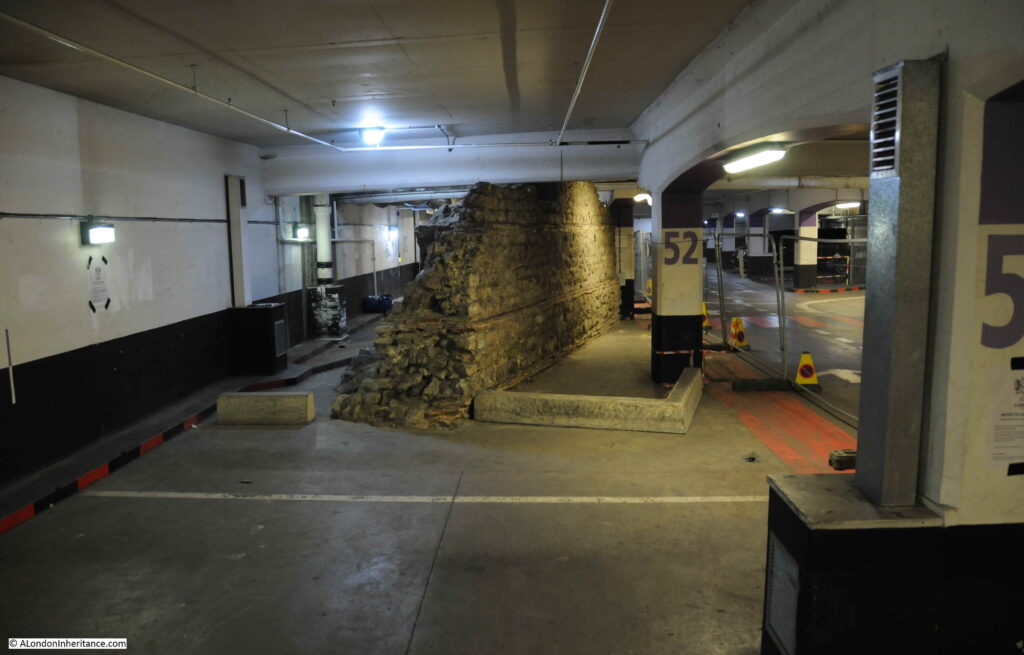 The alignment of the Roman wall in the car park seems to align with the remains of the Roman wall that can still be found in St Alphage Gardens. In the following map, the rough alignment of the wall in the car park is the solid line in the rectangle, the blue dashed line runs up to the wall remnants in St Alphage Gardens (the grey solid line): 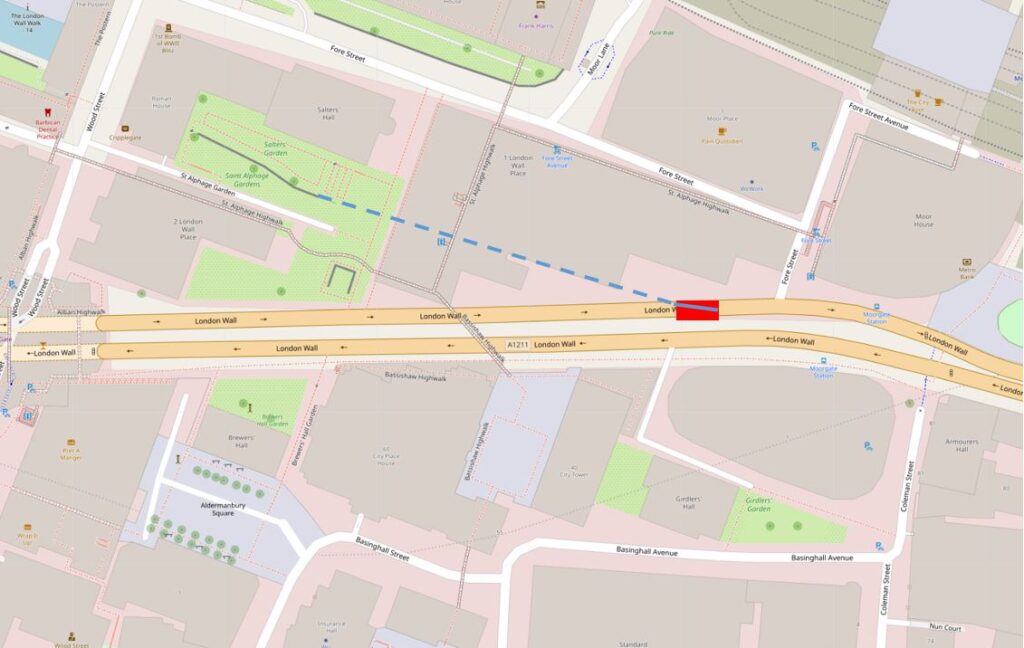 The side of the wall facing into the car park is the side that would have faced into the Roman City. The side is well preserved and consists of Kentish ragstone with triple tile courses at the base and the next course up, with a double tile course towards the top of the wall. 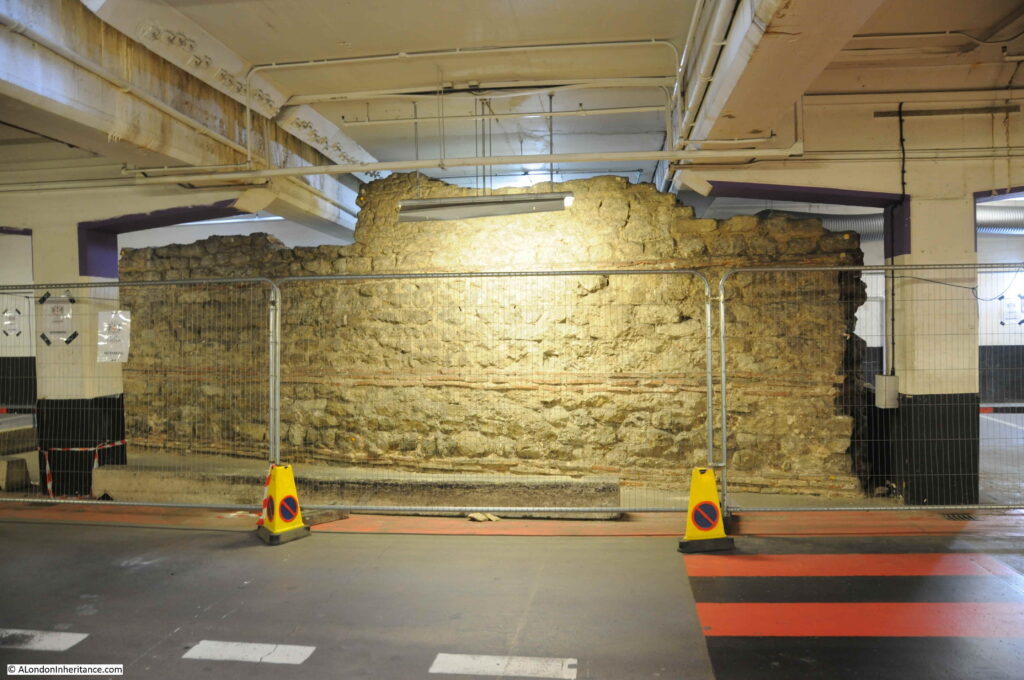 The following photo shows the construction of the wall, with on the right, the Kentish ragstone with the layers of tiles, the first along the base of the wall, then the second and third layers further up the wall. To the left is what is left of the core of the wall which had a rubble fill. 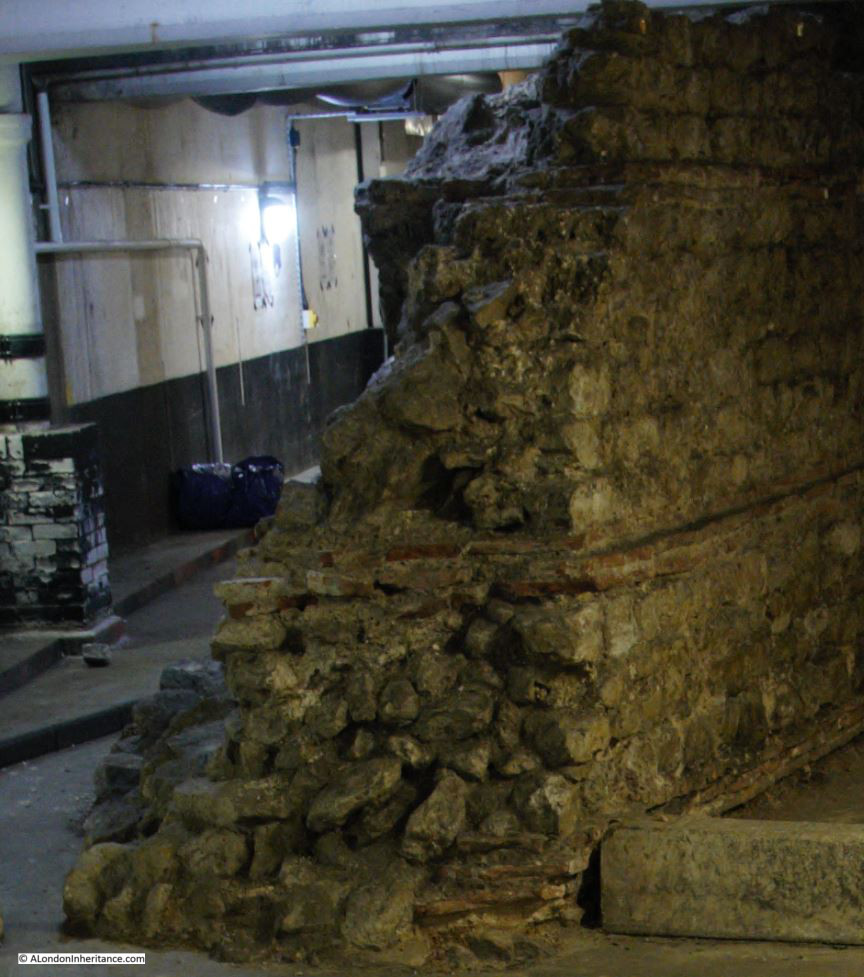 This section of wall is important, as it is the only surviving section of Roman wall in this part of the city that does not have lots of Mediaeval and later additions. 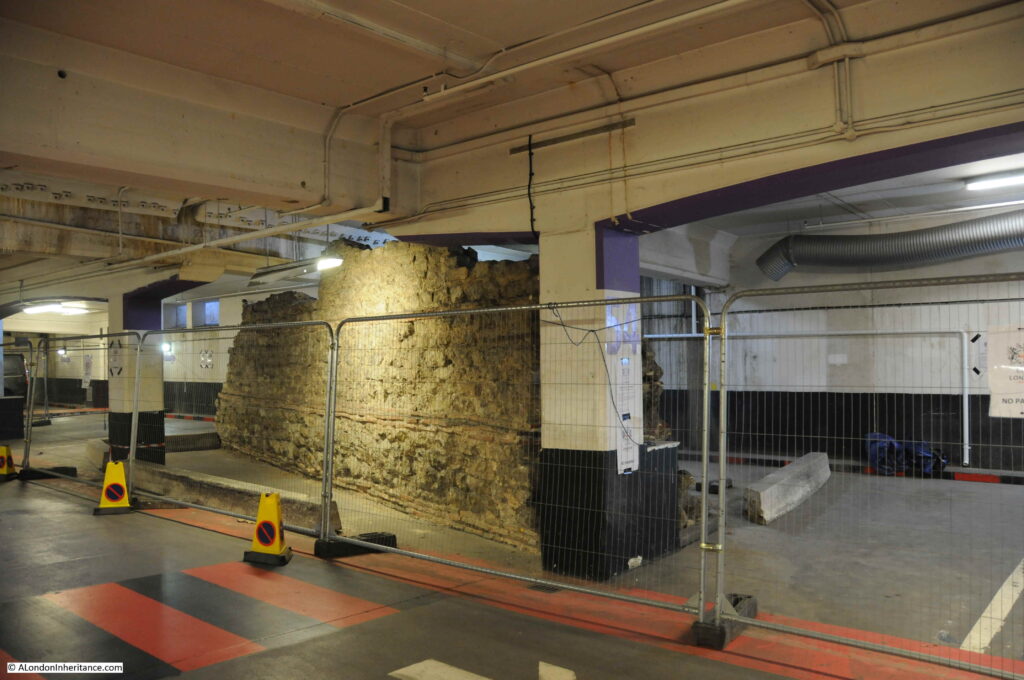 View to show the location of the wall and the length of London Wall car park. The car park seems to be under the entire length of the newly built four lanes of London Wall, and also runs the full width of the street – a cut and cover car park. 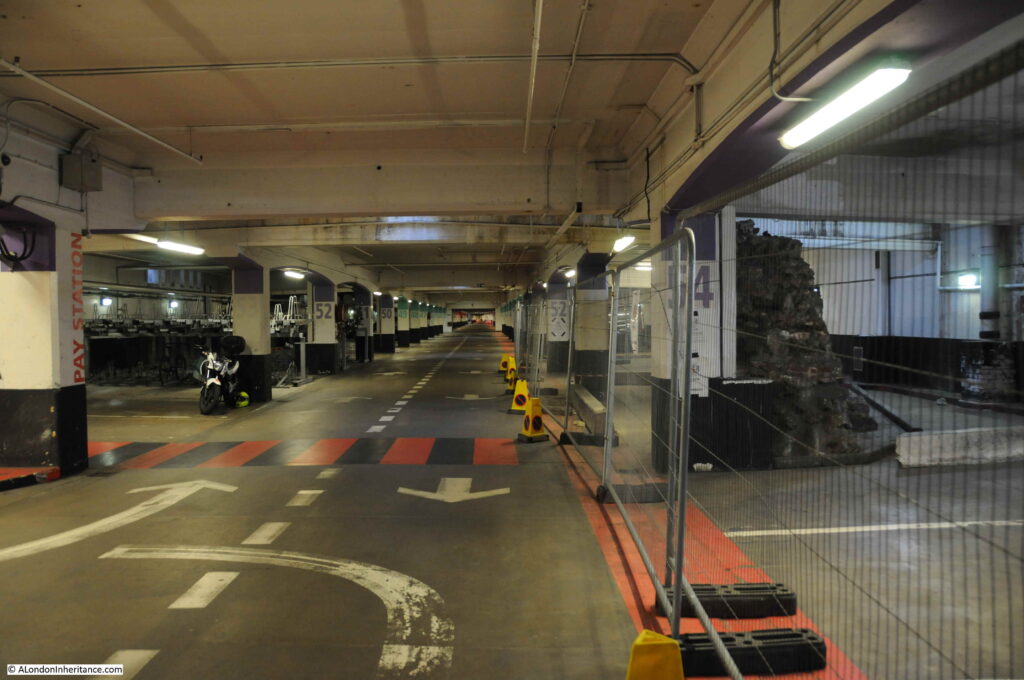 View of the rear of the wall in the following photo. The external facing facade of the wall has been robbed, demolished or lost at some point over the previous 1500 years. The view does show how substantial the wall must have been. 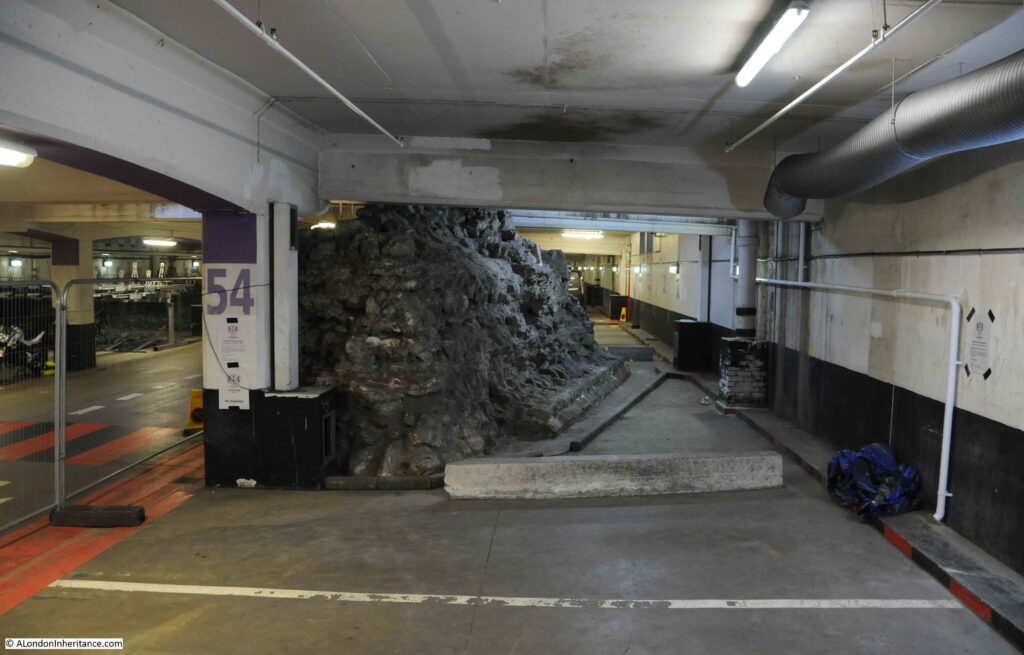 The wall in the car park must have been typical of much of the wall surrounding the City. W.F. Grimes in “The Excavations of Roman and Mediaeval London” compares the wall as follows: “A fragment of wall seen and partly preserved beneath the new London Wall is identical in general character with lengths exposed on the eastern side of the city at the Tower of London”.

It is rather strange to be standing in the car park, with the traffic of London Wall overhead, looking at a well preserved section of the Roman Wall. Another out of place structure to be found in London is:

A Pottery Kiln in Kensington

Walk along Walmer Road, towards the south end of the street and the junction with Hippodrome Place, roughly half way been Holland Park and Latimer Road stations, and a rather strange shaped brick structure will appear, jutting out in a gap between two rows of modern terrace houses. 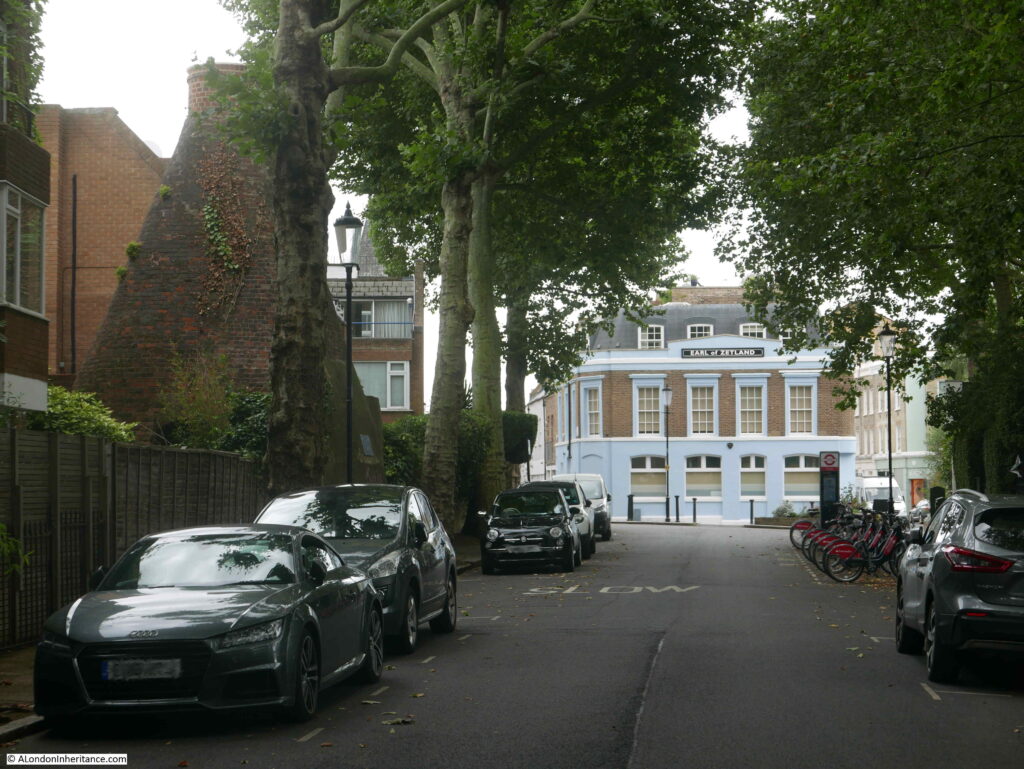 This brick kiln is all that remains of a pottery industry that existed in this area from the mid 18th century, to the 19th century. The shape of the kiln is known as a bottle kiln and is mainly a chimney to the kiln which would have been at the base of the structure.

The shape of the structure is to create an even airflow and remove smoke through the relatively small hole at the top, retain heat within the kiln, and to protect the interior of the kiln from external weather conditions. 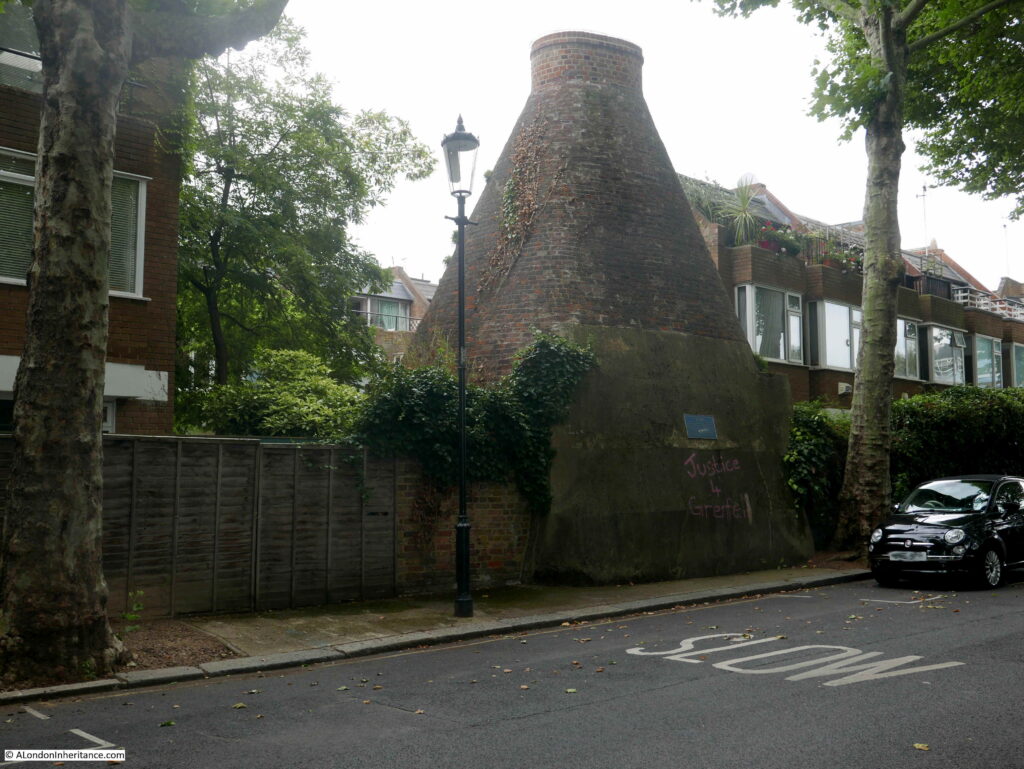 The kiln in Walmer Road was in use in the mid 19th century, and was part of a factory making products such as flower pots and drain pipes.

Today the kiln sits alongside Walmer Road, in a gap between two rows of recent terrace houses (sorry for the poor photos – I was using my small compact camera and something seems to have gone wrong with the way it handles back lighting). 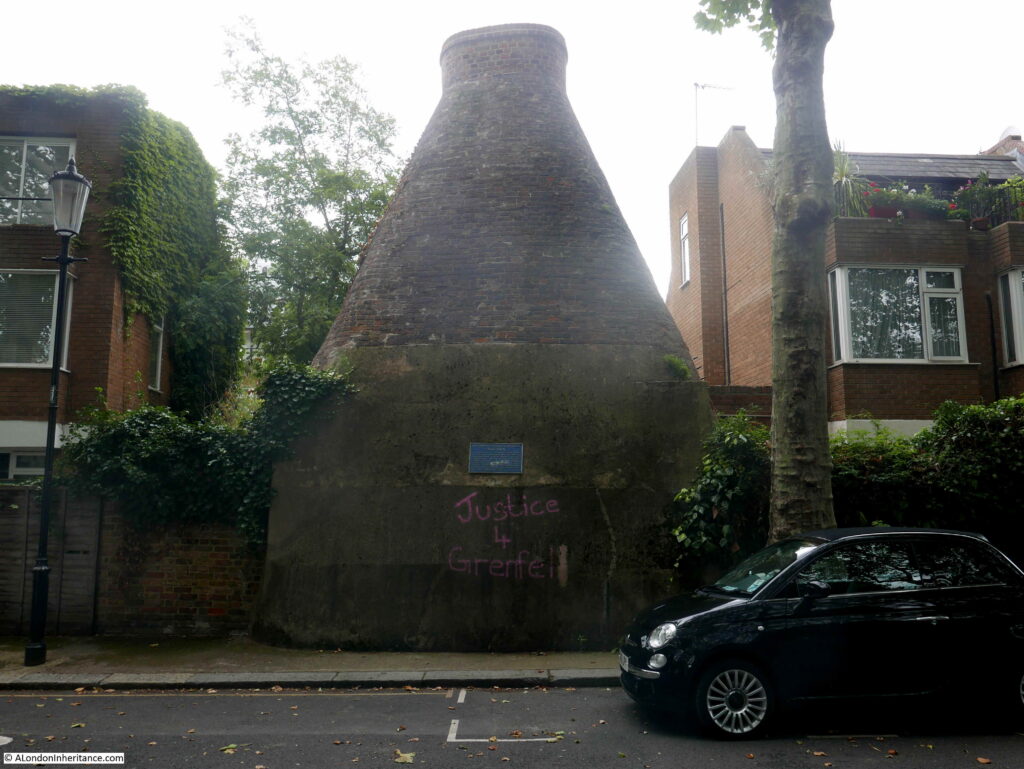 The plaque on the base of the kiln provides some background information: 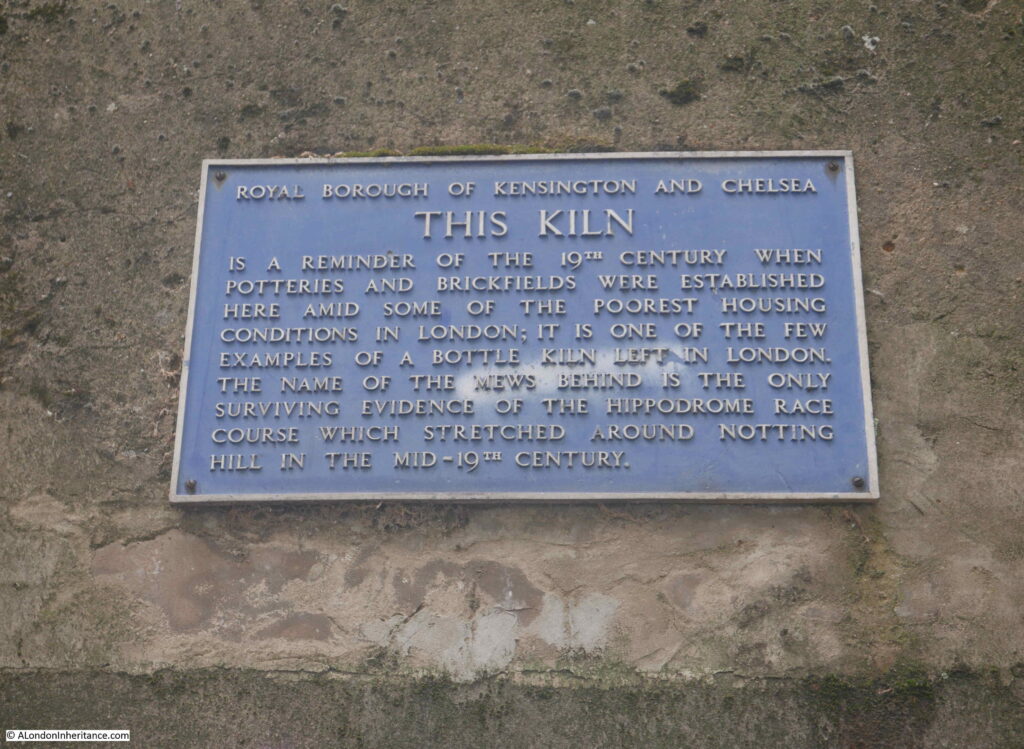 The Hippodrome Race Course occupied much of the surrounding area for five short years between 1837 and 1842. The race course was not a success for a number of reasons, including one that justified the existence of potteries in the area.

The ground consisted of heavy clay, which was good for making pottery, but not for horse racing. Much of the area was also very poor, with slum housing and the inhabitants were not those that the owners of a race course wanted to have attending or around the race course.

Clay had been dug up within the area for many years with a record dating back to 1781 of a “brickfield of yellow clay covering some 17 acres”.

Charles Dickens refers to the area in an edition of Household Words, where he described the conditions and also referred to the area as being called the Potteries:

“In a neighbourhood studded thickly with elegant villas and mansions, viz., Bayswater and Notting Hill, in the parish of Kensington, is a plague-spot, scarcely equaled for its insalubrity by any other in London; it is called the Potteries. It comprises some seven or eight acres, with about two hundred and sixty houses (if the term can be applied to such hovels), and a population of nine hundred or one thousand.  The occupation of the inhabitants is principally pig-fattening. Many hundreds of pigs, ducks, and fowls, are kept in an incredible state of filth. Dogs abound, for the purpose of guarding the swine. The atmosphere is still further polluted by the process of fat-boiling. In these hovels, discontent, dirt, filth, and misery are unsurpassed by anything known even in Ireland. Water is supplied to only a small number of the houses. There are foul ditches, open sewers, and defective drains, smelling most offensively, and generating large quantities of poisonous gases; stagnant water is found at every turn; not a drop of clean water can be obtained; all is charged to saturation with putrescent matter. Wells have been sunk on some of the premises, but they have become in many instances useless, from organic matter soaking into them”.

Some local street names recall the history of the area. Hippodrome Mews is on the other side of the kiln. Hippodrome Place is at the southern end of Walmer Road, and a short distance further south is Pottery Lane.

A painting by Henry Alken (Junior), titled “The last grand steeplechase at the Hippodrome racecourse, Kensington” shows a smoking kiln in the background: 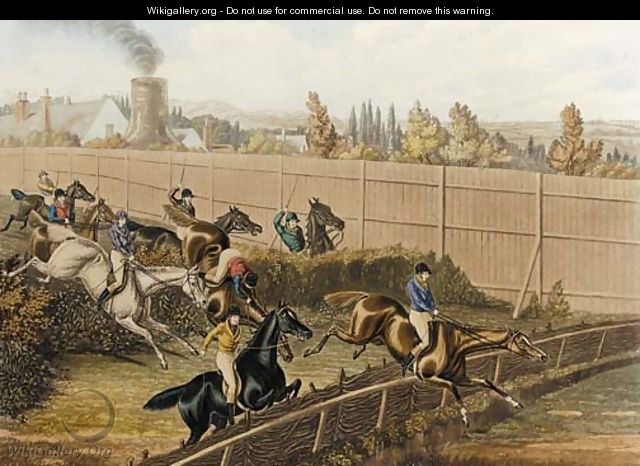 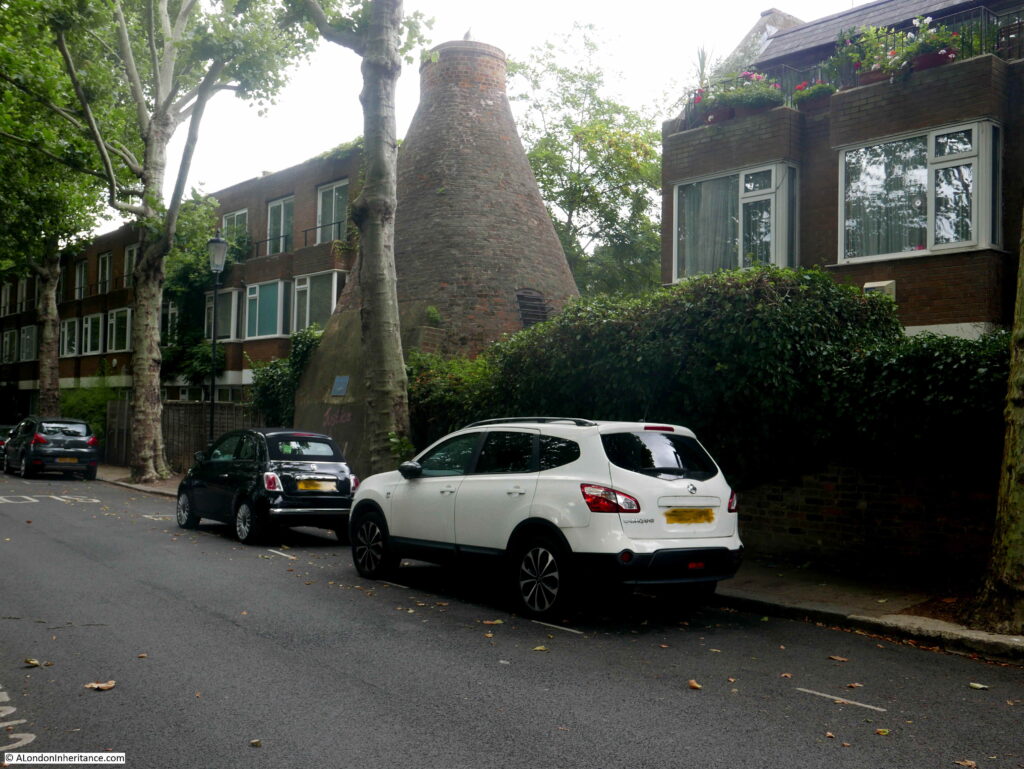 The Roman wall in a car park, and the pottery kiln are two very different structures in very different places, but both help tell the story of London’s long history, and both are examples of what you can find in the most unexpected places.