Thirty five years ago, my father was outside the Pilot in Greenwich. Located on the peninsular which now has the O2 Dome at the northern tip, the Pilot is one of the very few original buildings left after the recent and ongoing development of the Greenwich peninsula. 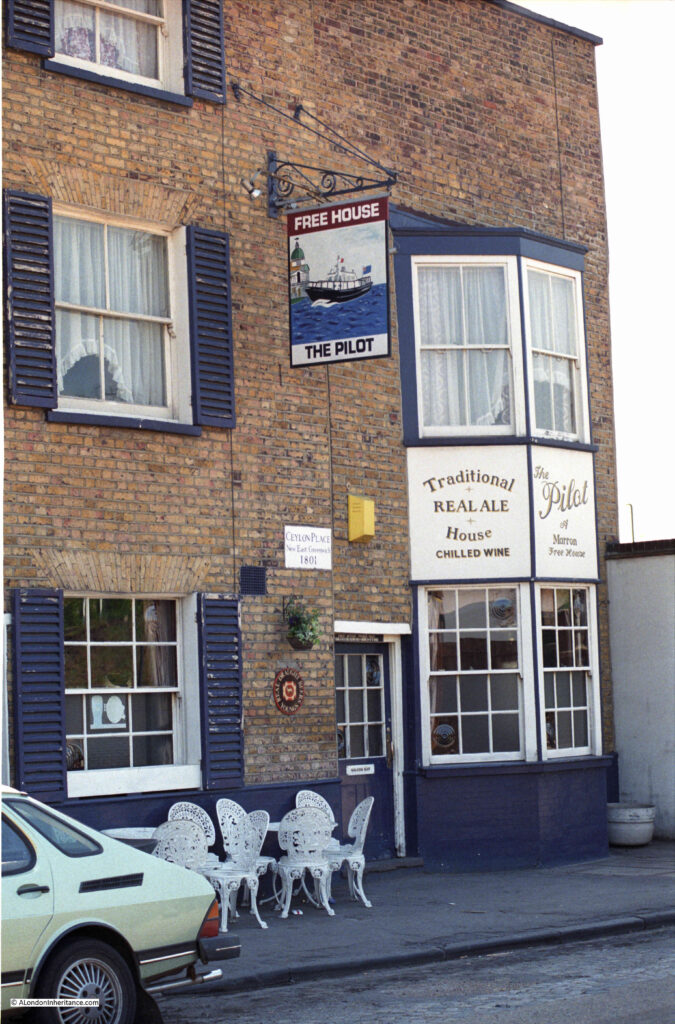 Last week I returned to the Pilot to take a comparison photo and for a beer. Although redecorated, and no longer a free house, the pub looks very much the same. 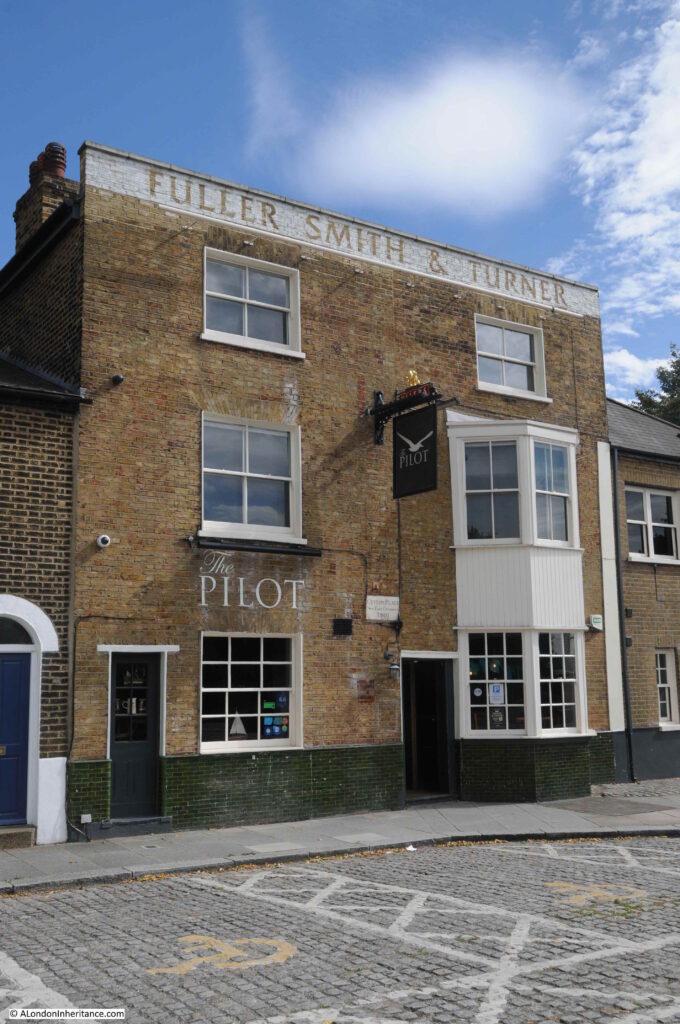 The Pilot is at the end of a short terrace of houses, originally going by the name of Ceylon Place. 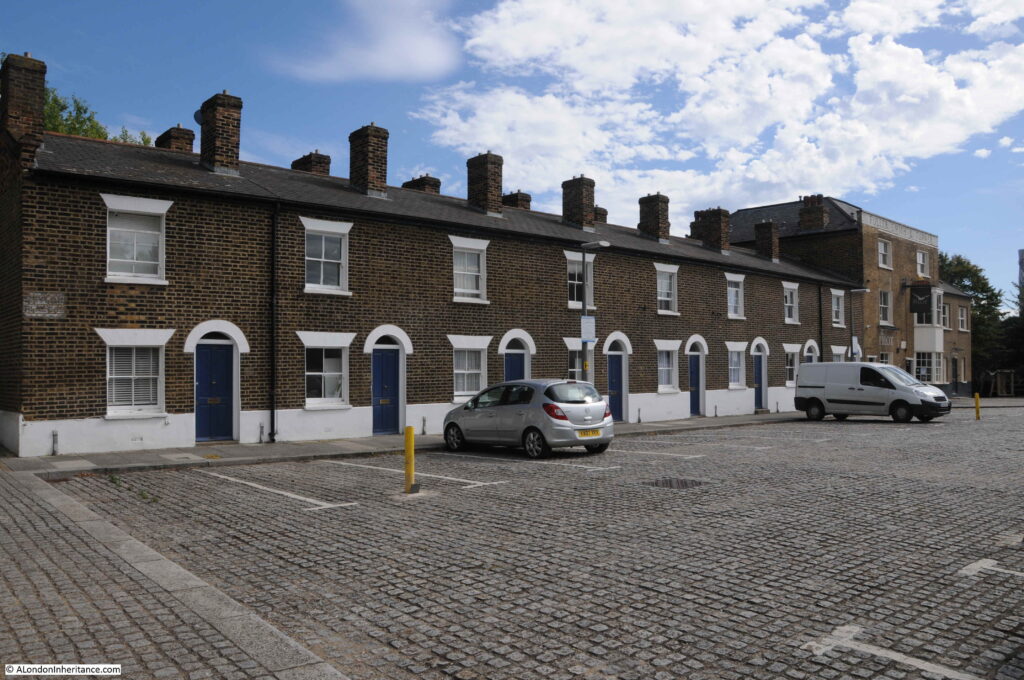 The location of the Pilot, and the terrace is shown in the following map, marked by the red oval. The O2 Dome is at the top of the peninsula (Map © OpenStreetMap contributors). 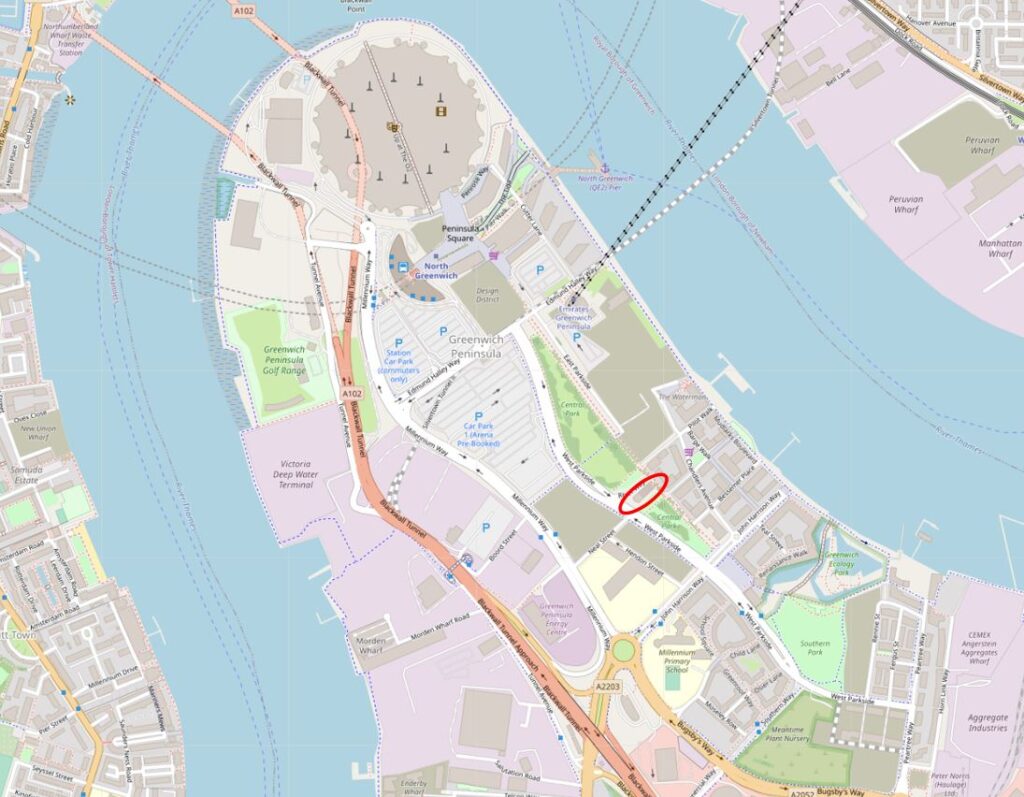 The Pilot and the terrace at Ceylon Place have are remarkable history, dating back to the early development of this part of Greenwich. The level, and type of change over the last couple of hundred years has been such that the pub and terrace have been surrounded by incredibly different landscapes.

We can explore these by looking at maps. The above map extract shows the area now dominated by the O2 Dome, and the associated developments, however, going back to 1951, and this was a very industrialised place. The Pilot and terrace is highlighted by the red oval in the following map extract (Following maps: ‘Reproduced with the permission of the National Library of Scotland’: 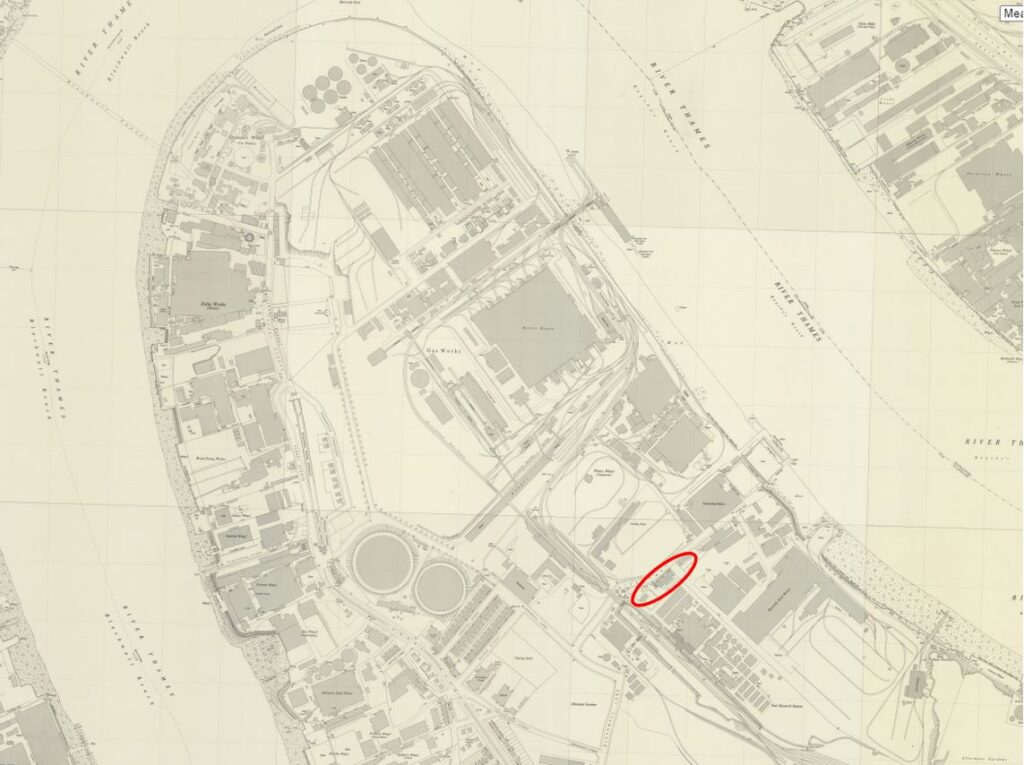 There are a few other terraces, in addition to Ceylon Place, however the majority of the land is occupied by Gas Works, Tar Works, Electricity Generation, a Steel Works, and many other smaller industrial sites. The following map extract is an enlargement of the area around the Pilot and Ceylon Place, which are in the centre of the map. 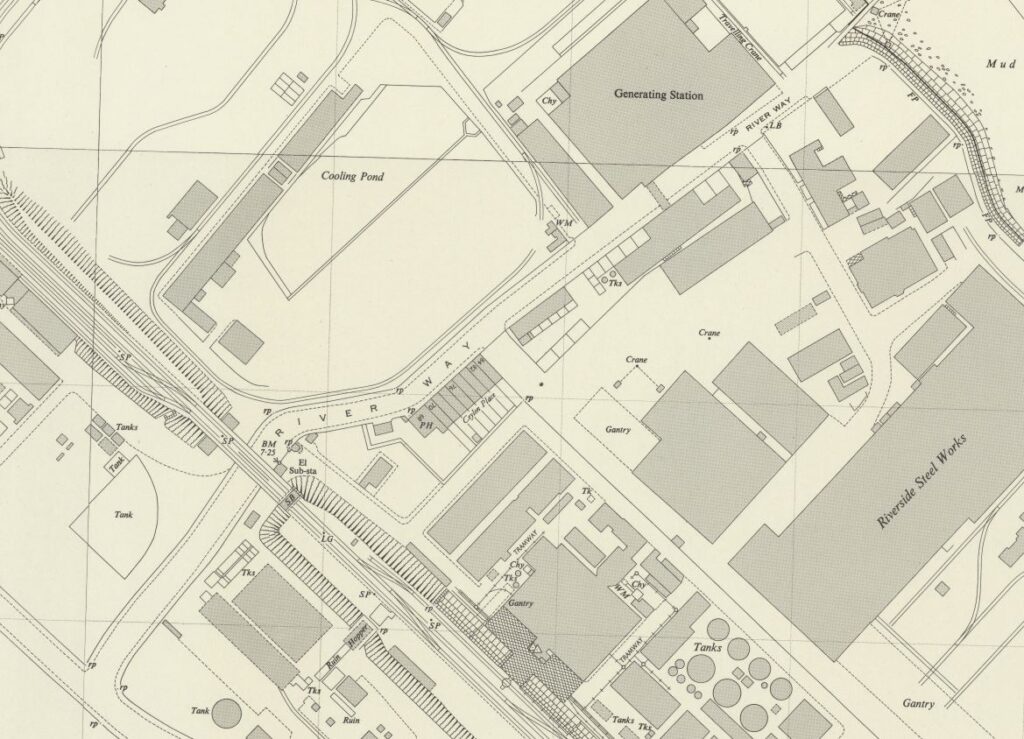 The pub and terrace face onto River Way which leads down to the Thames. A cooling pond occupies much of the space directly opposite. A railway runs to the west, Behind the terrace is a steel works.

The Pilot pub and Ceylon Place can be seen, with a longer terrace that stretched to the east. Much of the immediate surroundings are open space, and the railway has not yet arrived. The area to the south are the Greenwich Marshes. 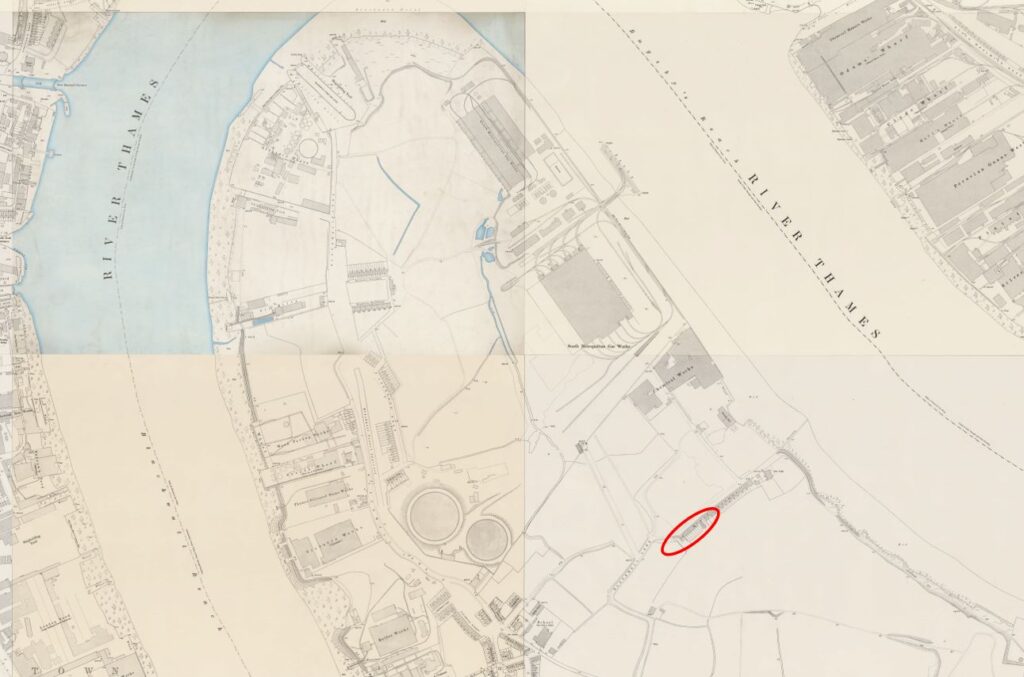 Looking at an extract from the above map, we can see the terrace in 1893, with the Pilot (labelled P.H.) at the western end of the terrace as it still is today. 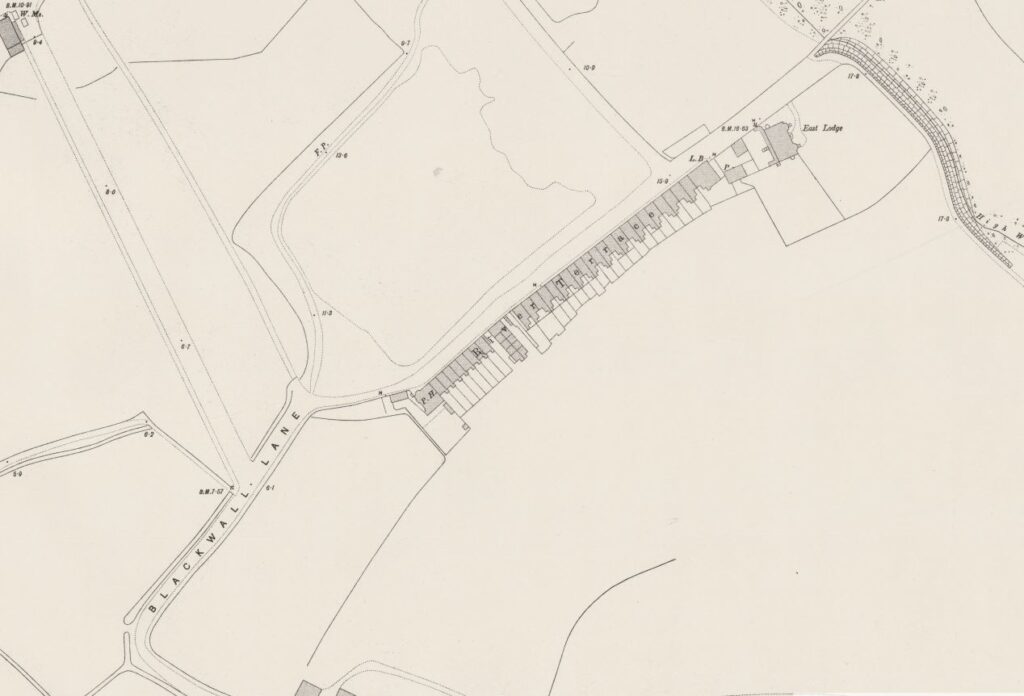 At the eastern end of the terrace, there is a large building called East Lodge with open space leading down to the river and bays on either side – presumably bay windows to provide a good view of the Thames.

The majority of the terrace, and East Lodge would disappear in the coming years. By the 1913 Ordnance Survey map, East Lodge had gone. and by 1939 much of the terrace had also been lost, leaving only Ceylon Place we see today, and the Pilot pub.

Today, the Pilot looks out on yet another very different landscape. A ten minute walk from the O2 Dome, in the middle of a green space, and in the process of being surrounded by tower blocks of ever more outlandish design.

The Pilot and the terrace date from 1801. A plaque on the front of the pub to the upper left of the main entrance confirms the date, the name Ceylon Place and New East Greenwich which was the name given to the development, as it was expected to form the basis of a larger development.

The main body of the pub is original, however, as will be seen when comparing my father’s photo, and my photo below, a smaller extension to the right has been added. This now provides accommodation, so if you want to stay on the Greenwich Peninsular, there is an option with a pub attached. 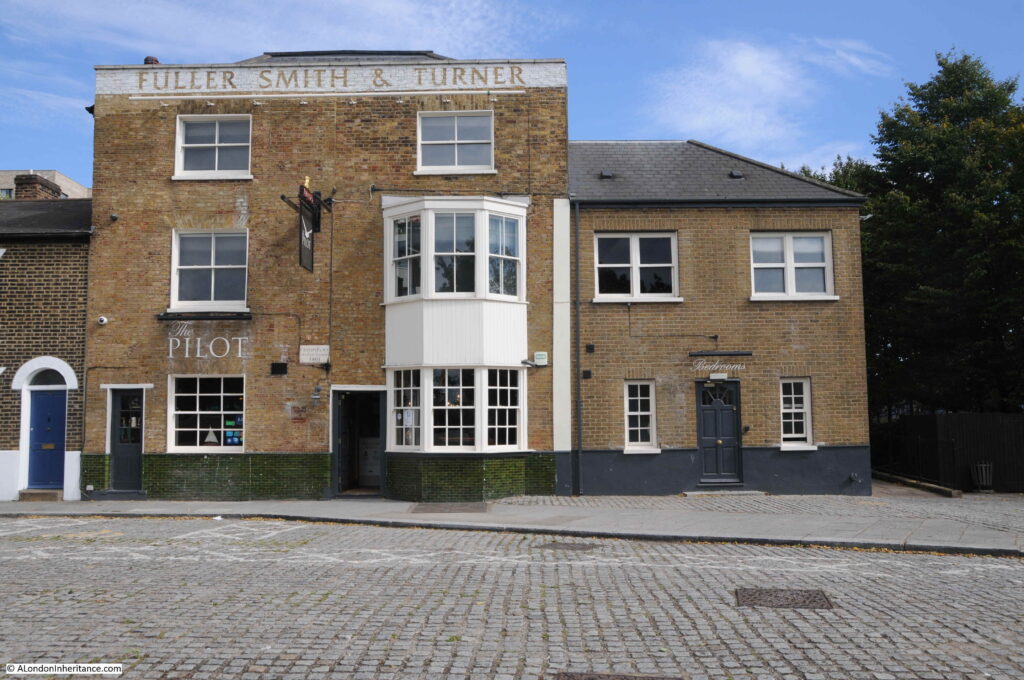 The London Metropolitan Archives Collage collection has a photo of the Pilot and terrace dating from 1979. The Pilot looks the same as in my father’s photo, with the same pub sign, however look closely at the terrace of houses and you will see three of these have their window and door bricked up. The 1970s and 80s were the time when industry in the area was in significant decline, and it is surprising that the terrace has survived to this day. 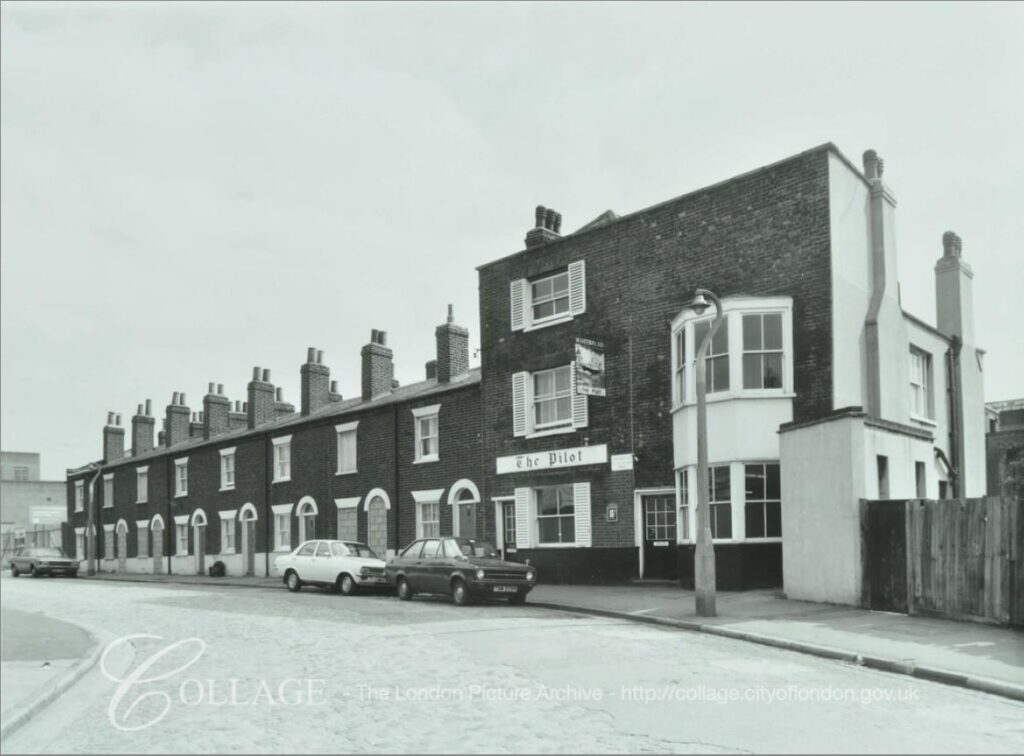 The street in front of the pub and terrace now ends in a dead end, rather than running down to the causeway that ran into the Thames. Today, blocks of apartments now separate the Pilot and terrace from the river that for much of their time, must have been a significant influence on the lives of those who lived in the houses and drank in the pub. 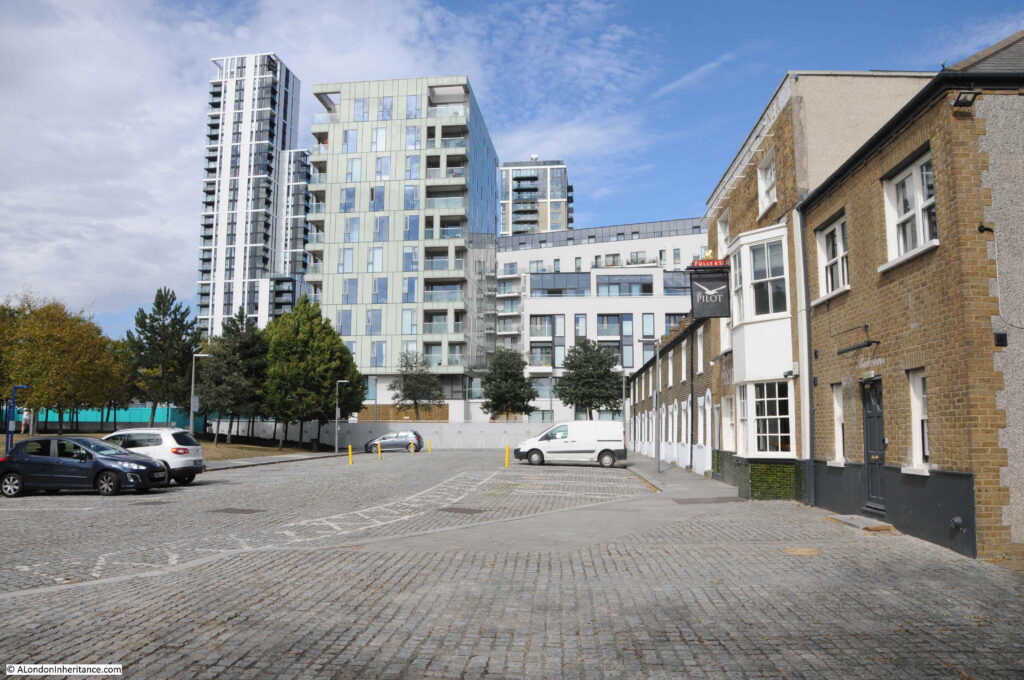 We can get a good idea of life in the terrace and pub by looking at old newspaper reports. When first built, the rear of the terrace looked out onto the Greenwich Marshes and a maze of ditches draining into the Thames, however in July 1857, the Kentish Mercury reported that:

“The inhabitants of Ceylon-place, East Greenwich complain of the very offensive state of the ditch at the back of their houses. They inform me that this ditch, like all other ditches on the Marshes, was formerly flushed out at every tide, but since Mr Wheatley has lately stopped up a sluice at the entrance to the ditch. The water is, therefore, become stagnant, and is certainly in an offensive state, and thereby causing the nuisance complained of”.

There were the day to day events that would have had significant personal impact, to those who lived in the terrace. On the 30th May 1840:

“POOR MAN’S LOSS – On Saturday evening last, as a poor labouring man was going home, after work, he lost the whole of his wages, amounting to 30s, besides some papers which, to the owner, are of consequence. The finder of the documents would be doing an act of great kindness by forwarding the same to No. 3, Ceylon Place, Greenwich”.

There was the type of crime common when drink was involved. In March 1903 the Woolwich Gazette reported that:

“Frederick Boos, a foreign seaman, of s.s. Hendon, was charged on Thursday at Greenwich  with assaulting a waterman, named Russell Lewis, of 6, Ceylon Place, East Greenwich. The victims head was bandaged and he said he was suffering from several bad cuts, said the prisoner hit him several times without any provocation. Boos alleged that the prosecutor had been making false statements about him and that he (Boos) was drunk at the time – Two months hard labour”.

The victim, Russell Lewis is recorded as being a waterman of Ceylon Place. Checking the census data reveals that this was a common occupation for those living in the terrace in the 19th century. In the 1871 census, there were several watermen, and watermen’s apprentices among the occupants of several of the houses.

Another mention of a Waterman living at Ceylon Place is from the Kentish Mercury on the 3rd April 1885: “A PUGILISTIC WATERMAN – Charles Watkins, waterman, of 8 Ceylon-place, East Greenwich, was charged on summons of assaulting another waterman named Richard Preddy. The complainant said he was sitting on a seat at the Anchor and Hope Wharf, waiting for a ship to come up the river. He heard footsteps and saw Mr Watkins, who pulled off his coat and wanted him to fight; he told him to put on his coat, when the defendant struck him in the face, and then they both fell over the seat”.

Charles Watkins was fined 20 shillings with 2 shillings costs for the attack.

The majority of the other inhabitants were recorded as being labourers. One, a Mrs Elizabeth Elliott, widow, aged 74 was on the Parish Poor Relief. This was a very working class terrace.

There were other professions, perhaps unexpected in such an industrial area. In 1901, a resident of Ceylon Place was up before the Lord Mayor:

“THE SERIOUS CHARGE AGAINST A GREENWICH MAN – At the Mansion House on Thursday last week, Charles Rayner, aged 23, described as a music-hall artiste of Ceylon-place, Greenwich was again before the Lord Mayor on the charge of being concerned with another man in stealing £10 from the Falstaff Restaurant, Eastcheap”.

Publican’s were in danger of prosecution if they continued to sell alcohol to those already drunk, and in July 1908, in an article entitled The Peril of the Publican, it was reported that:

“Mary Ann Millington of the Pilot public-house, Ceylon-place, East Greenwich, was summoned for selling intoxicating liquor to a drunken person, and for permitting drunkenness”.

When they were living in the terrace, Charles Watkins and Charles Rayner, would have looked out on a rapidly industrialising area, but they would have still been very familiar with the last of the fields and marshes on the peninsular, and the causeway down to the river at the end of the longer terrace would have probably been used by many of the watermen of Ceylon Place.

Looking north from the terrace, the view would have been of cooling ponds and gas works. Today the view is of a park. 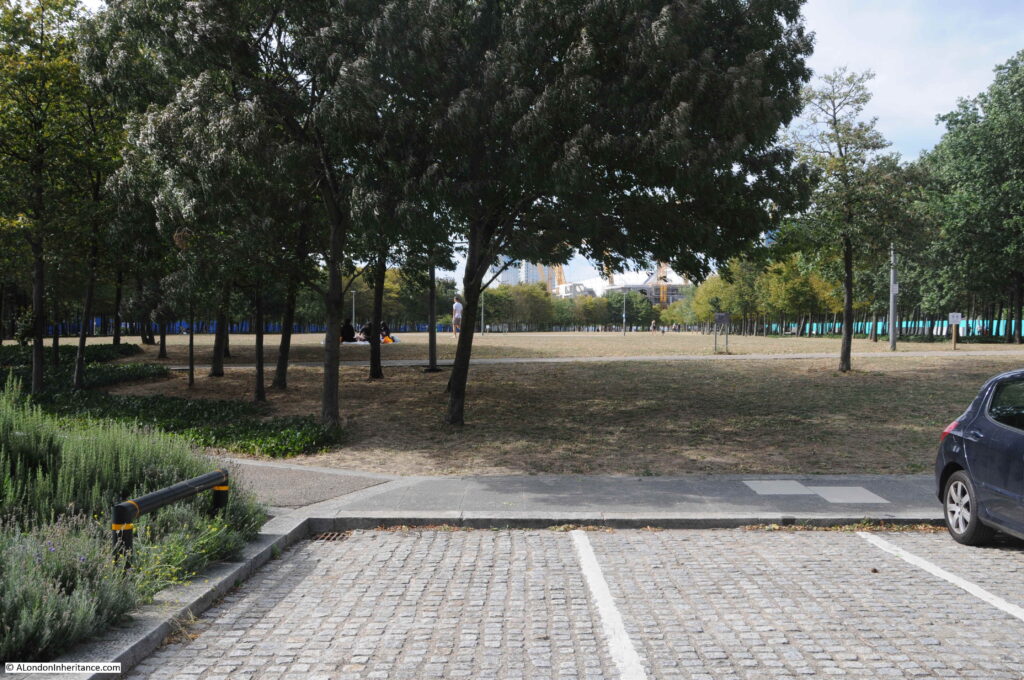 And replacing the electricity generating station, and steel works are now rows of apartment buildings, which also block off the direct access to the river that the watermen of Ceylon Place formerly enjoyed. 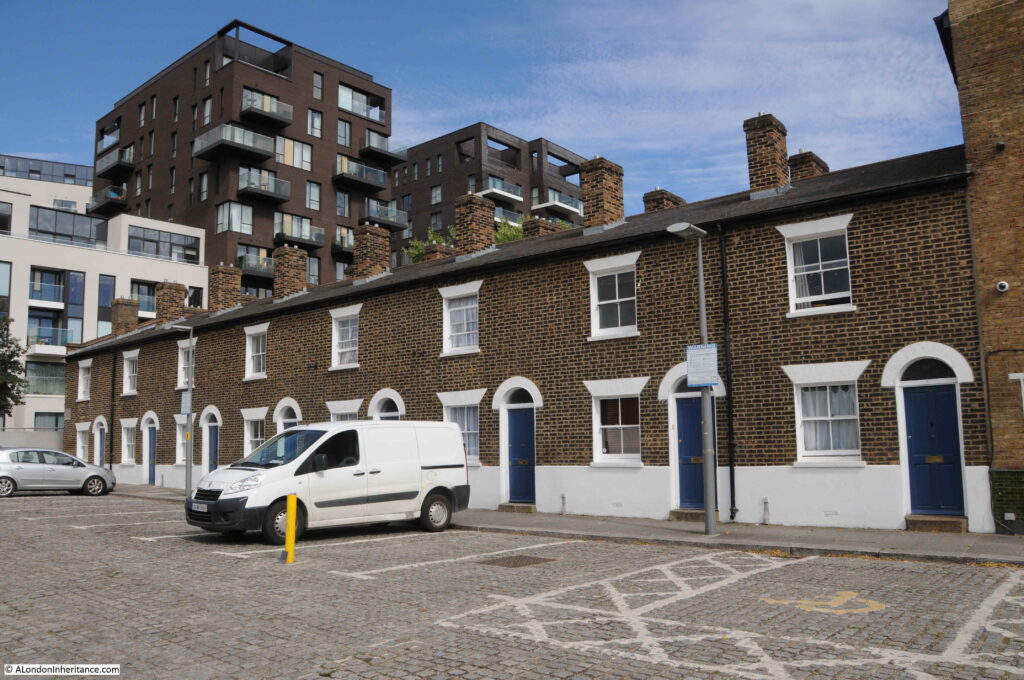 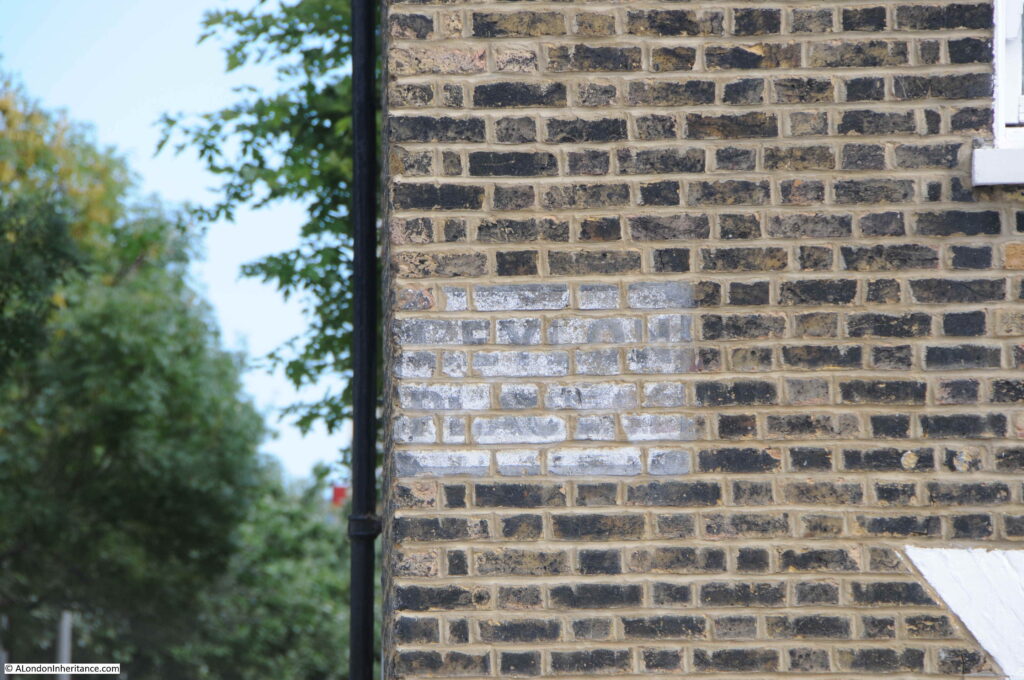 The view of the terrace hidden behind trees on the walk down from the northern tip of the peninsula: 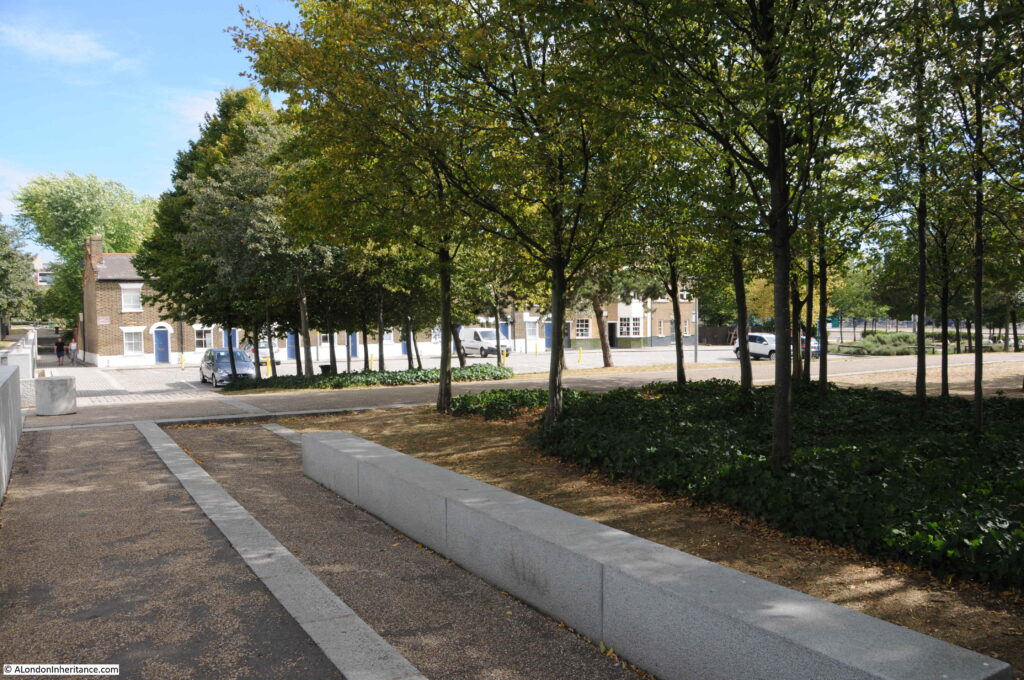 The park is now established, but all along the eastern edge of the peninsula, building is continuing and the park is fenced off from numerous building sites. The following photo is the view looking north from the same position as the above photo. Tall buildings can be seen in the distance, to the east of the O2 Dome, and the building sites to the right are fenced off, so many more tall apartment buildings will soon overlook Ceylon Place and the Pilot pub. 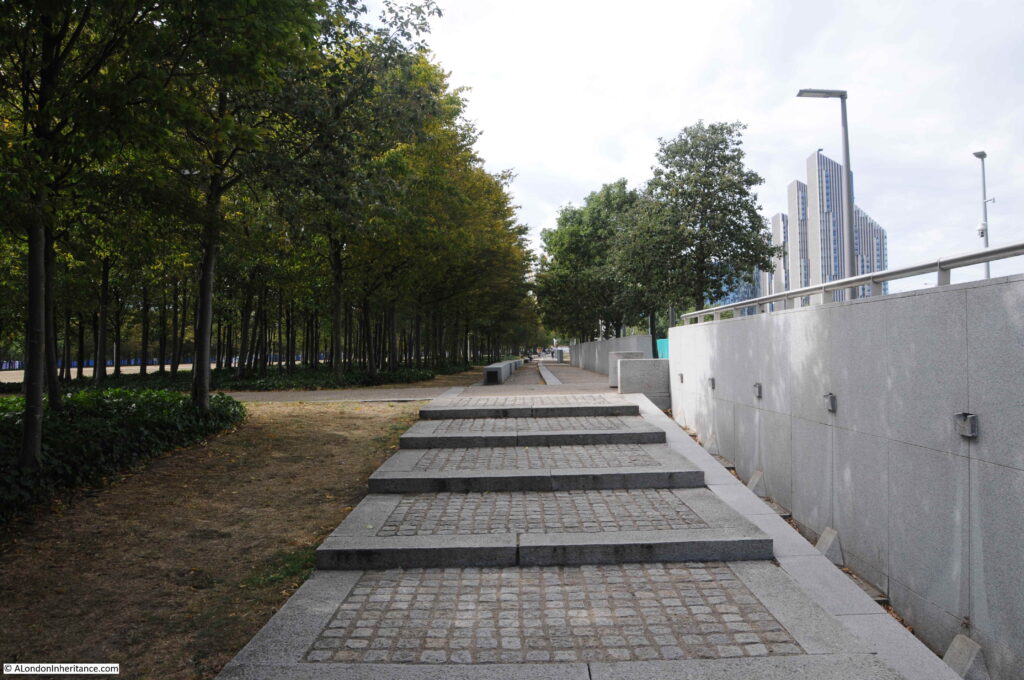 The Pilot is a really lovely pub, with an open terrace at the rear which was perfect on a warm August afternoon.

The Pilot and Ceylon Place have been here for over 200 years. They were:

I suspect one of the watermen, or a worker in the industries on the peninsula would never have guessed what the place would look like today, and likewise, we probably have no idea what the peninsula will be like in one or two hundred years time, but I hope the Pilot and the Ceylon Place terrace will still be there to see how this part of London develops.

28 thoughts on “The Pilot and Ceylon Place, Greenwich”