Islington is full of wonderful squares. Created during the first half of the 19th century as London expanded over the agricultural fields that once characterised so much of Islington. Individual developers built terrace streets and often included squares where the houses benefited from a central garden.

These squares offered a peaceful place to live. Away from the traffic and noise of Upper Street and Essex Road, but still with easy travel into the heart of the city. One such square is Gibson Square, however the tranquility of Gibson Square was lost in 1970 when the Victoria Line burst through the surface of the gardens with a rather ornately designed ventilation shaft that now emits the noise of fans across the square.

It was this second section to Warren Street that went underneath Gibson Square. The overall line included roughly 50 ventilation shafts, with a shaft being built at the half way point between stations. Gibson Square is roughly half way between Highbury and Islington and King’s Cross St Pancras Stations, so it was here that London Transport decided to build a ventilation shaft.

These were usually of a purely functional design, a concrete block of up to 50 feet high. The residents of Gibson Square were understandably not happy.

Many Islington Squares in the 1960s were run down, and the terrace houses were owned by landlords, only interested in maximising profit, rather than spending on the upkeep and improvement of their buildings. London Transport probably expected minimal opposition to their plans, however a determined group of local residents led a campaign against the ventilation shaft during the 1960s.

They took their protest to London Transport and the Ministry of Transport. They also had the surprising support of the architect Sir Basil Spence. Surprising as he was responsible for a number of buildings in the Modernist and Brutalist style, including the former Home Office building at 50 Queen Anne’s Gate and tower block of Hyde Park Barracks.

After many design iterations, a much smaller ventilation shaft was designed by the architects Raymond Erith and Quinlan Terry. Completed in 1970, the ventilation shaft looks like a small temple, with three niches facing into the park with a pediment above. 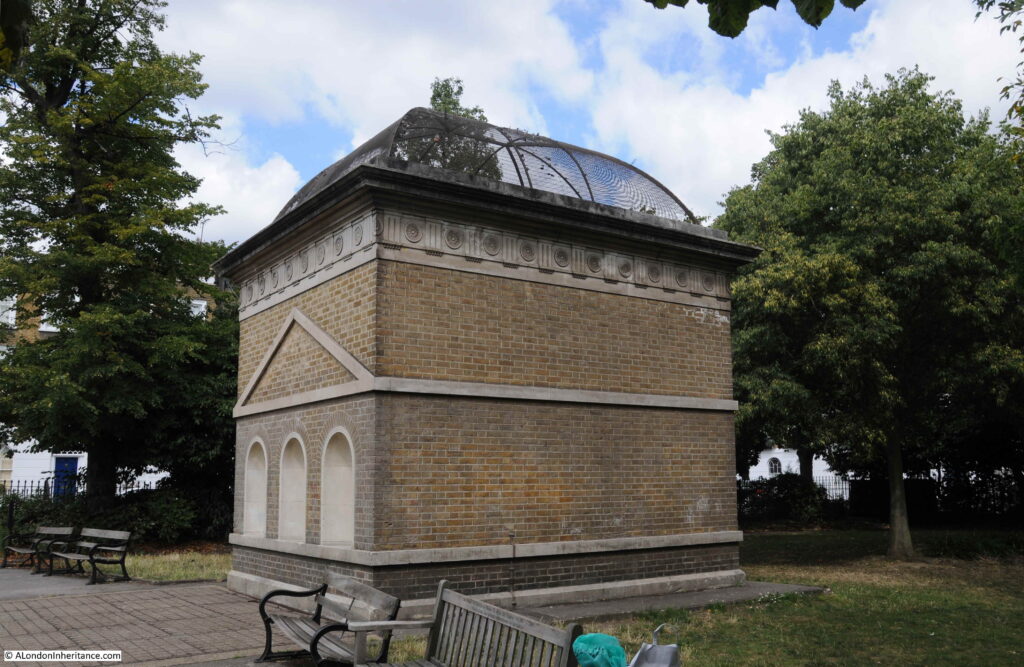 Whilst the architectural style of the ventilation shaft blends in well, the sound emitted by the shaft probably does not. Walk into Gibson Square and the background hum of fans permeates the whole of the square. The following video clip gives an impression:

The Victoria Line cuts diagonally across Gibson Square. The line was constructed in the days before lasers would be mounted on buildings along the route to check for any impact from tunneling. and tunneling did cause some settlement to some of the houses.

The following map shows the route of the Victoria Line between King’s Cross St Pancras and Highbury and Islington stations. The line is shown by a light grey, dashed double line. I have marked Gibson Square by a red oval (Map © OpenStreetMap contributors). 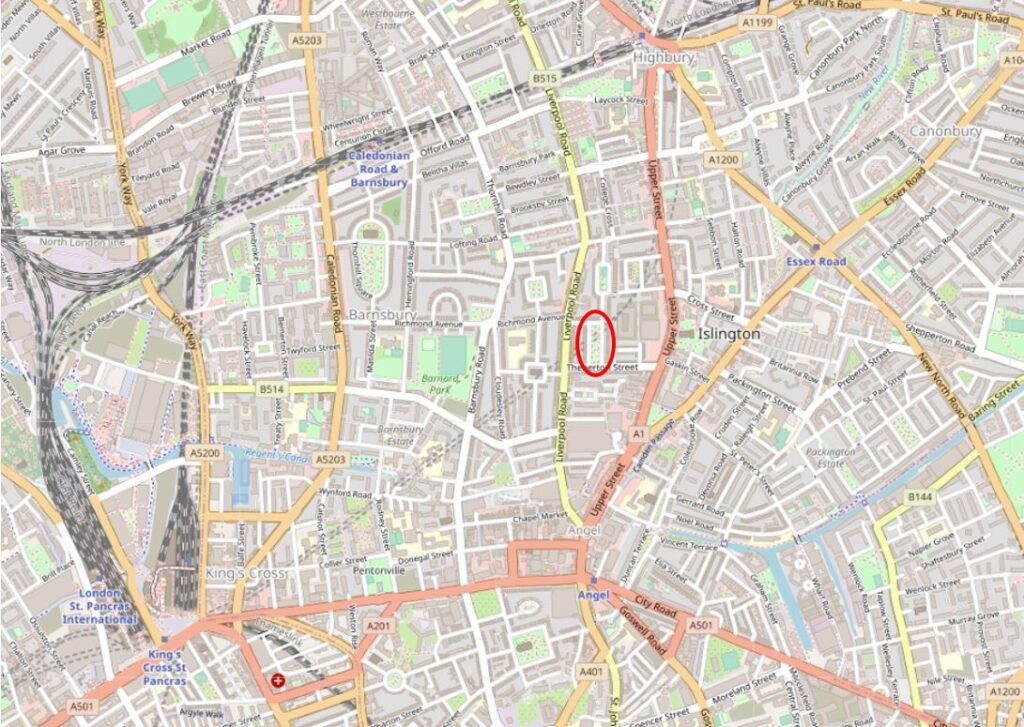 The gardens were taken over as a construction site for several years, but were restored by London Transport following completion of work on the ventilation shaft. This included the provision of new iron railings around the gardens to replace the chicken wire which had been there since the original railings were removed during the war.

View of the gardens looking south from the ventilation shaft: 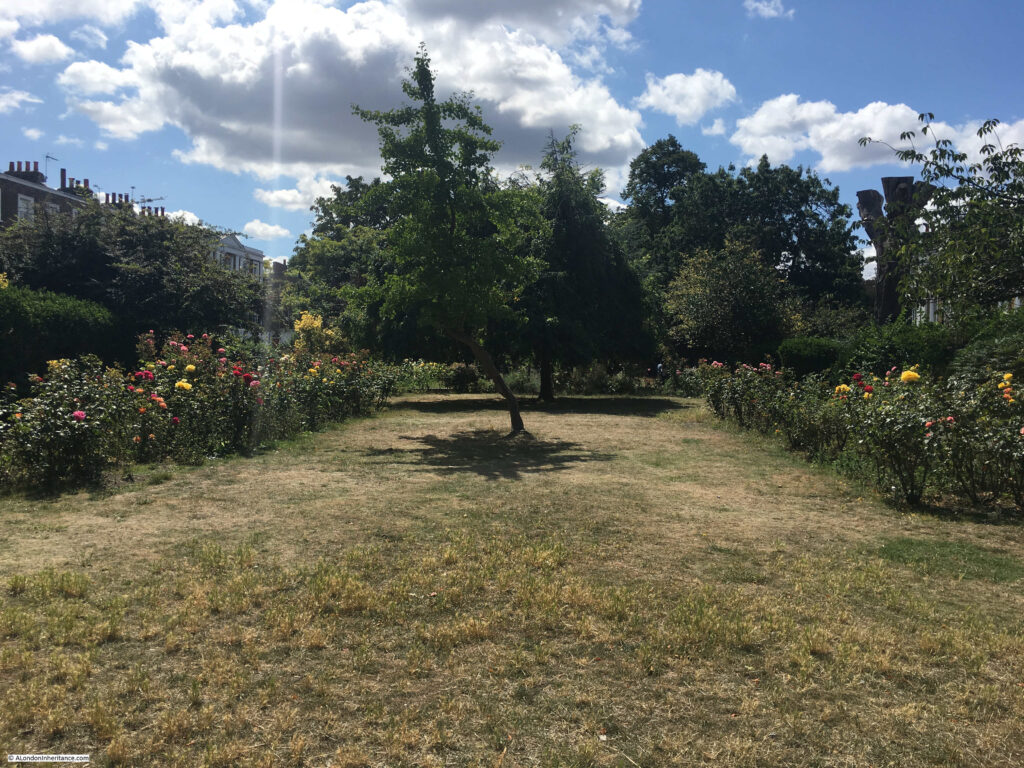 The land on which the square was built was held by the Milner-Gibson family who came from Theberton in Suffolk, hence the name of the street, Theberton Street which was the first to be built to the south of the square.

The majority of Gibson Square was completed by 1839 and by the mid 1840s the square had been finished in much the same way as we can see today.

The view looking north along the western side of Gibson Square from Theberton Street: 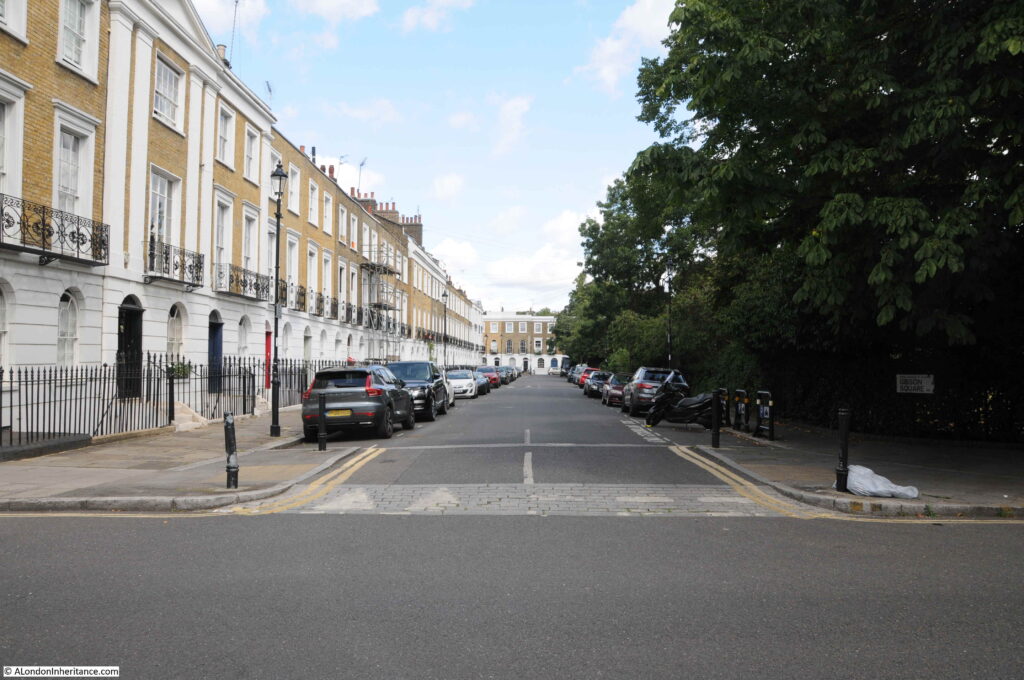 The architect for much of the street was Francis Edwards, and it was his use of pavilion blocks at the end of each long terrace that give Gibson Square a distinctive appearance when compared to other Islington squares. An example of one of these pavilion style buildings is shown below: 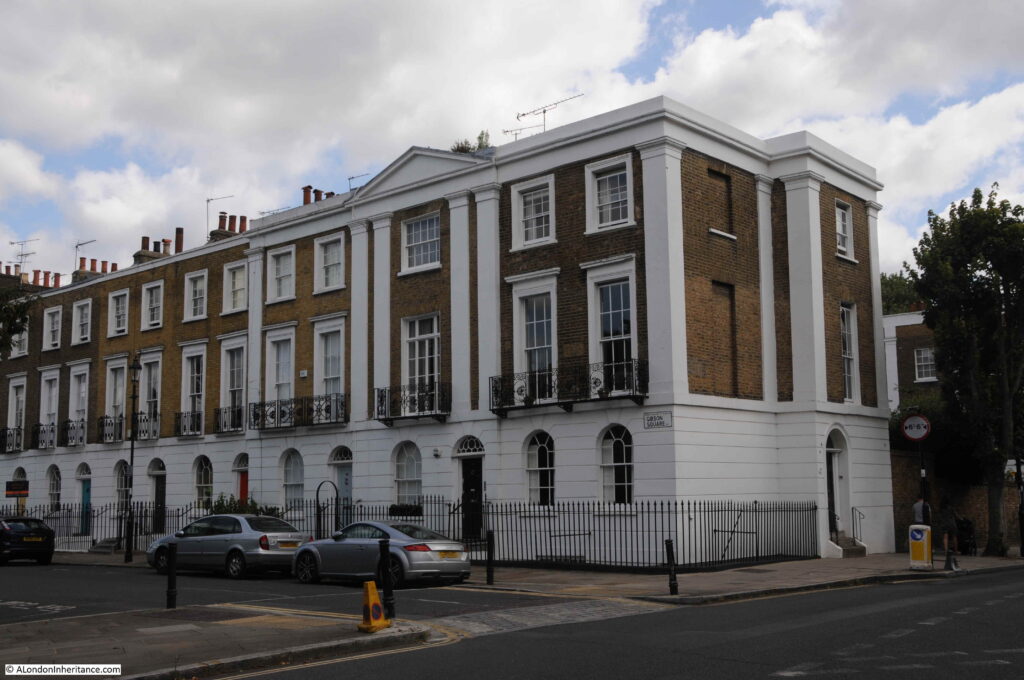 As with so many streets and squares, they were developed in stages, and by different builders and architects. Although Francis Edwards was responsible for much of the square, other designs were used, and this can be seen in the sudden change in style along a terrace: 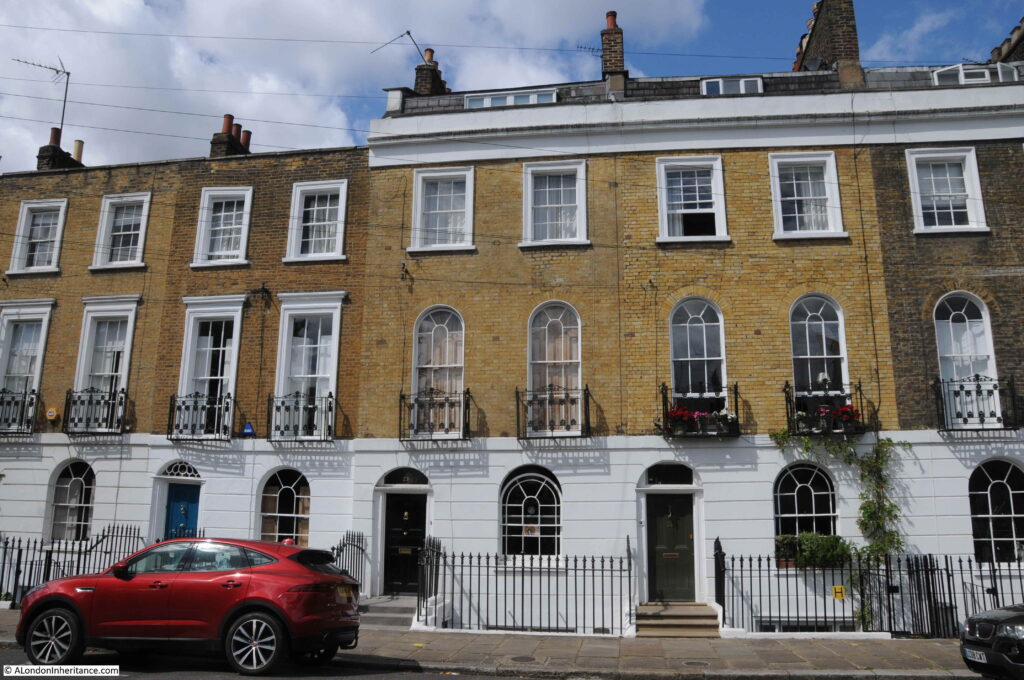 The following photo shows the view looking south from the north of the square. The building at the end in Theberton Street also makes use of the triangular pediment at the top of the facade with supporting dual pillars on either side.

The feature is offset when looking down the centre of the street. I could not work out why. I did wonder if the street had been widened. It could be that the feature at the end is more central when walking on the pavement rather than in the road, or it could be just that Theberton Street was built first before Gibson Square was laid out.

The following photo shows one of the Pavilion style buildings at the northern end of Gibson Square. This block comprises three houses with architectural features on the facade to give the impression that this is a single house. The houses either side of the centre house have the same size windows as the rest of the terrace, however the central house has been given larger windows to help the illusion of a single house. 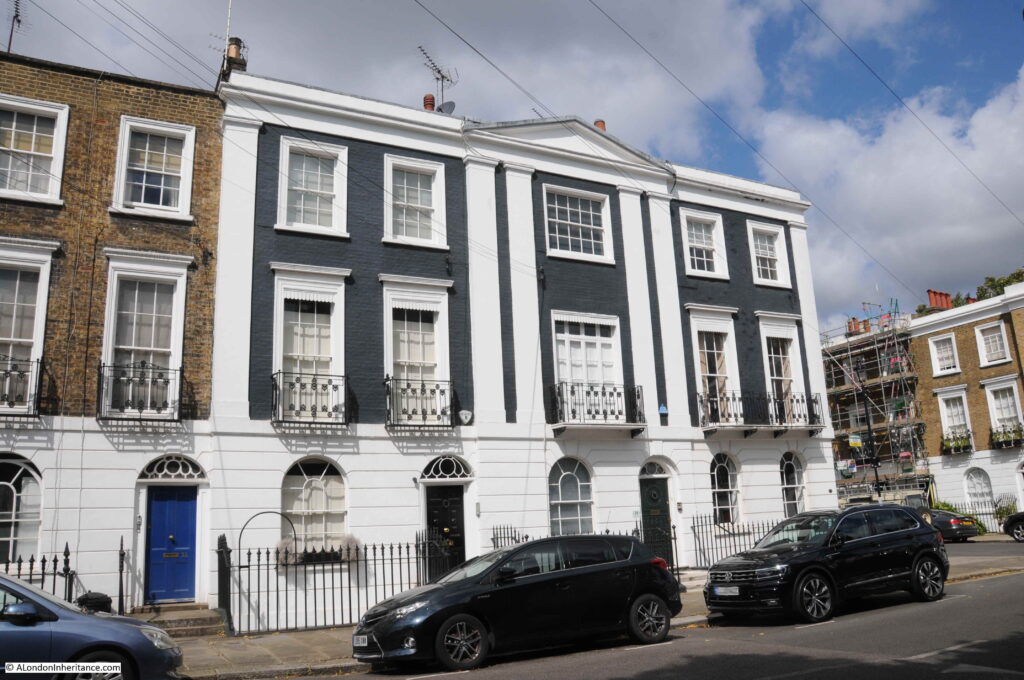 The separate doors give the game away. The entrance door to the house on the right is on the side of the house facing the street at the top of Gibson Square.

The fields that Gibson Square was built on was part of a parcel of land that stretched further north, although the shape was rather elongated. Bounded to the east by a large saw mill that would later become the Post Office complex and current apartment, resturant and shopping space of Islington Square, and on the west by Liverpool Road.

The Milner-Gibson family built a second square on this land to the north of Gibson Square, and perhaps unsurprisingly called this second square, Milner Square.

To reach Milner Square there is a short stretch of road named Milner Place. The view from Milner Place looking south along Gibson Square: 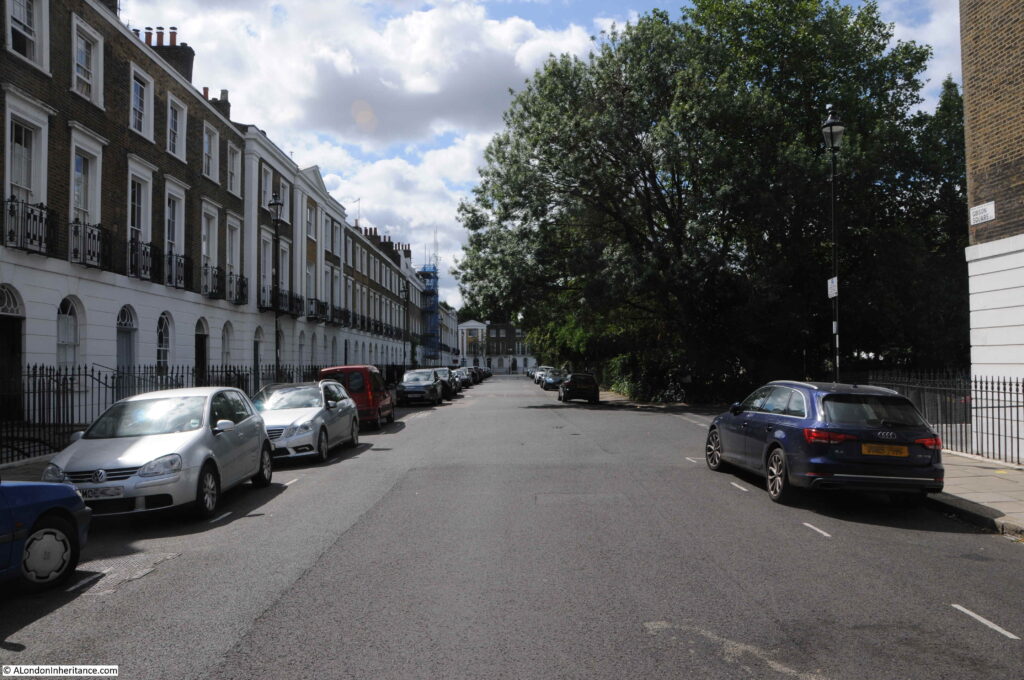 And looking north to Milner Square which is slightly offset to Gibson Square, with the central garden being visible from the eastern road from Gibson Square. The offset was down to the shape of the land available for building. 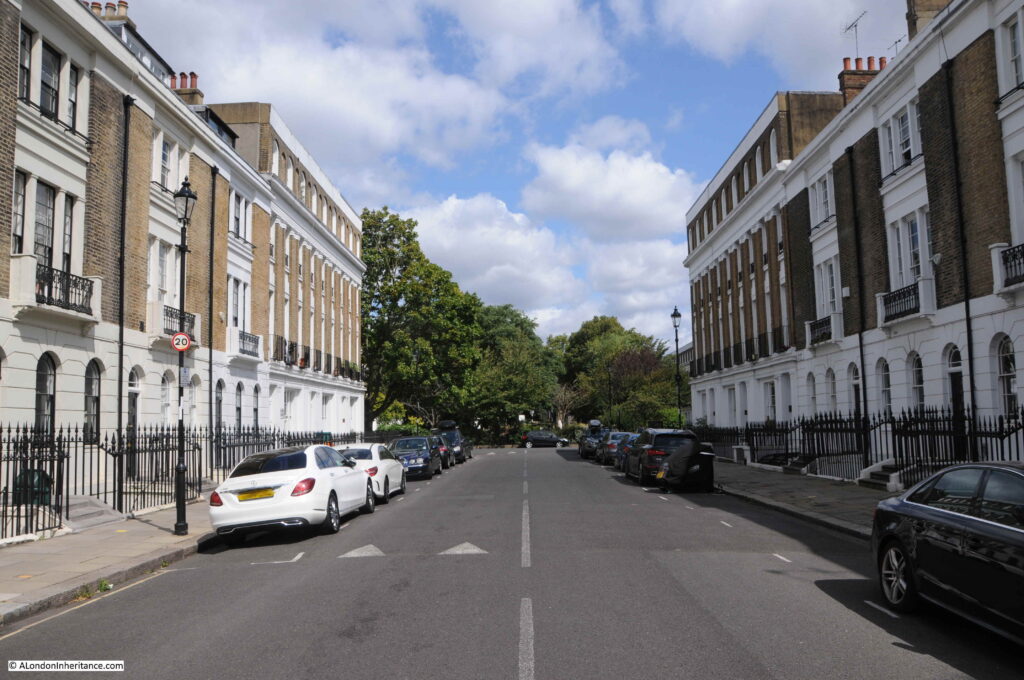 Milner Place and Milner Square – preserving along with Gibson Square, the name of the Gibson-Milner family. 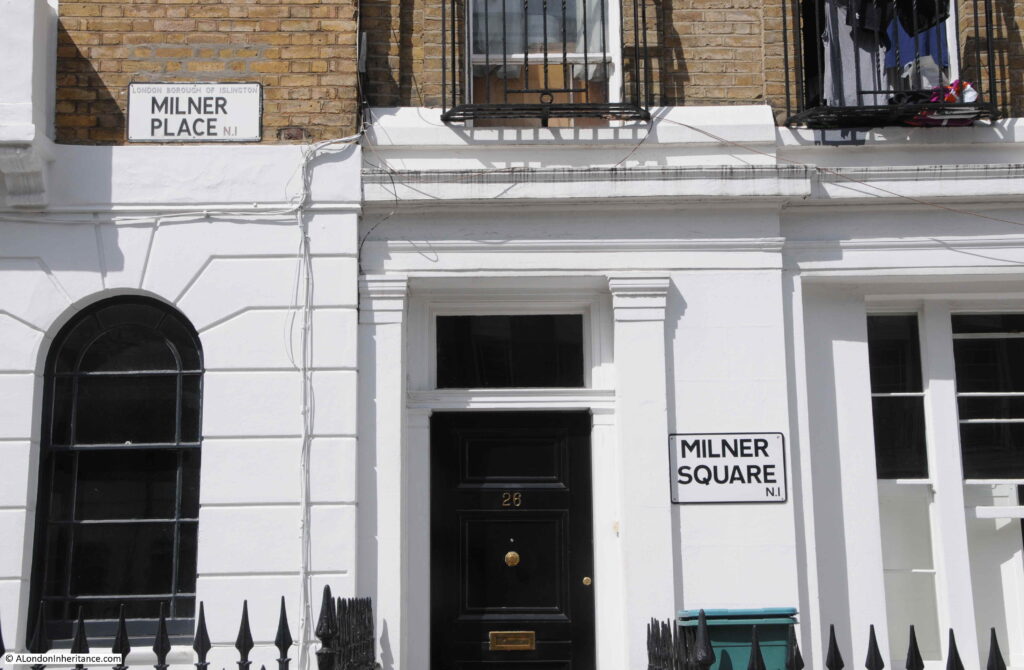 Milner Square is very different to Gibson Square. Completed by the early 1850s by the architects Alexander Dick Gough and Robert Lewis Roumieu, the street presents a continuous terrace of houses with no features to break up the terrace. Even the chimney stacks are hidden from view.

Unlike Gibson Square, Milner Square was completed to a single plan by the same architects. The terrace also wraps around the corners of Milner Square into Milner Place.

There were plans for a church to be built where part of the above terrace stands. To cater for the spiritual needs of the growing population of Islington, squares often had a church built at the same time. Local examples include Cloudesley Square and Thornhill Square, however for some reason, the Milner Square church was not built.

There are some features in the square which are not that obvious. If you look at the photo below, there is a silver car on the left of the photo, parked side on in the view. Behind the car there appears to be one of the many entrance doors that run at equal intervals along the terrace. 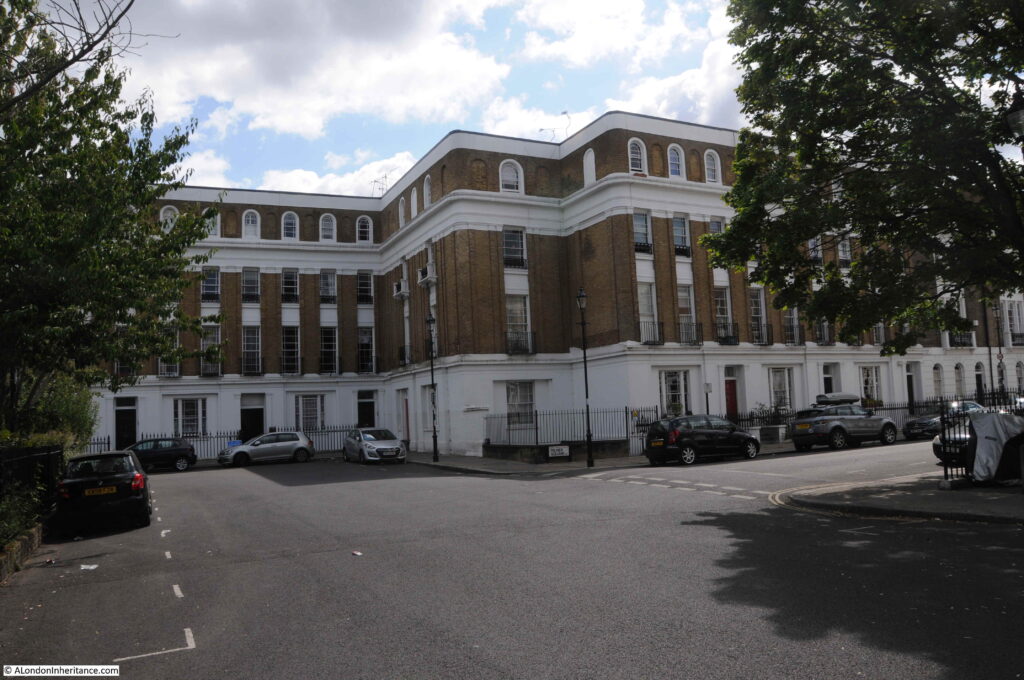 However, this single door is not a door, rather is an entrance to a passage through to Almeida Street. 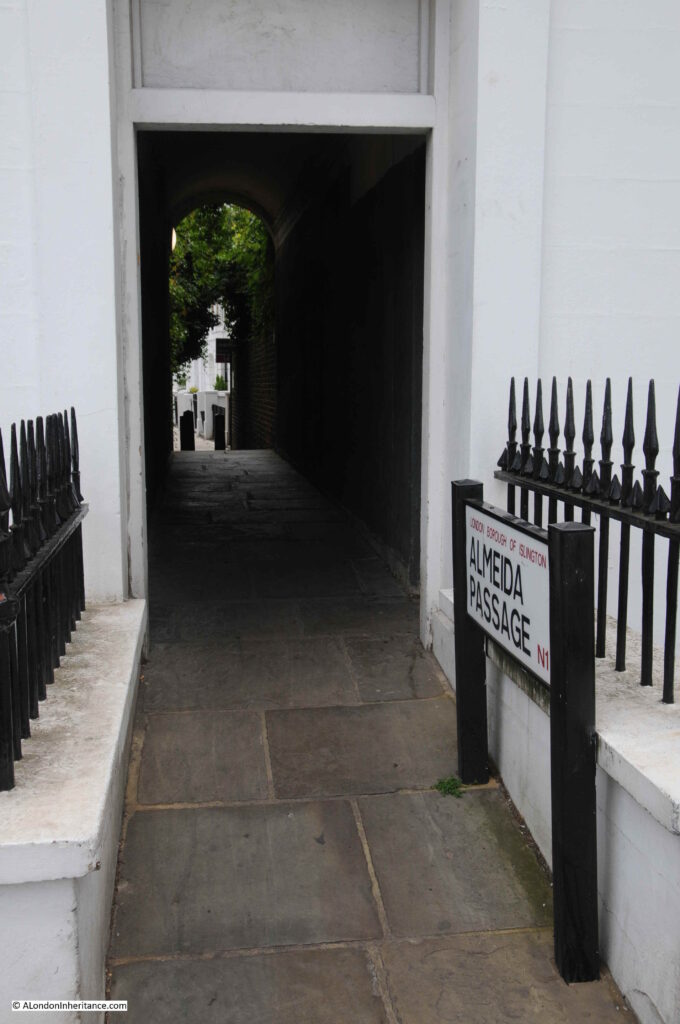 Walking through the passage takes you into a very different place, compared to the regimented rows of terraces along Milner Square. Plants flow over the garden walls at the back of the houses on Milner Square. 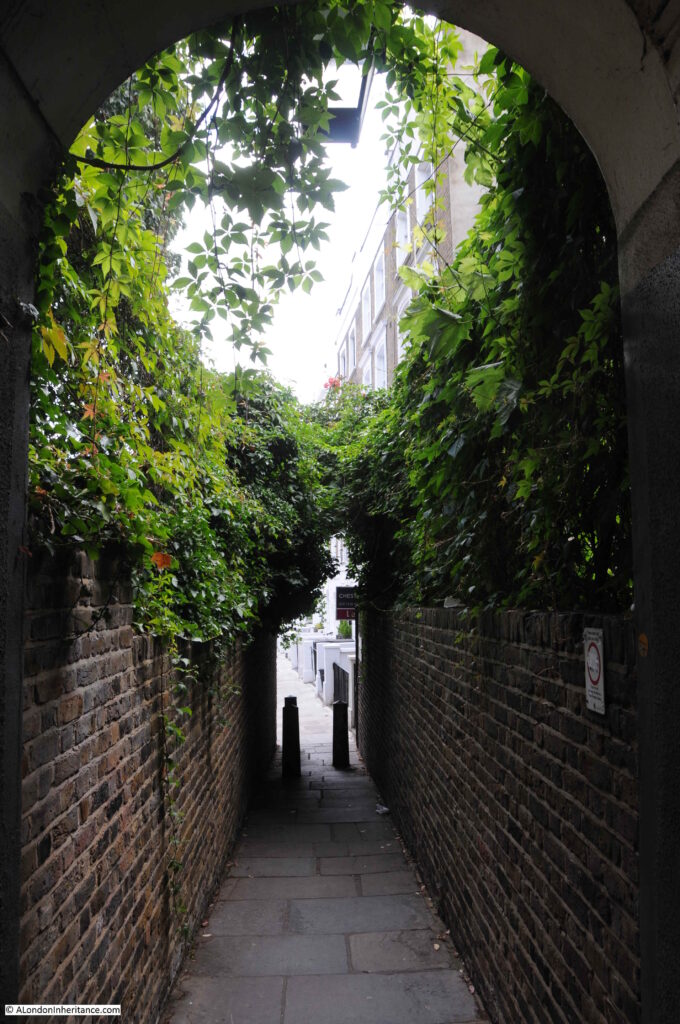 Looking back to Milner Square – one of those London passageways that will always look good at night, with a single lantern providing light to the 19th century passage. 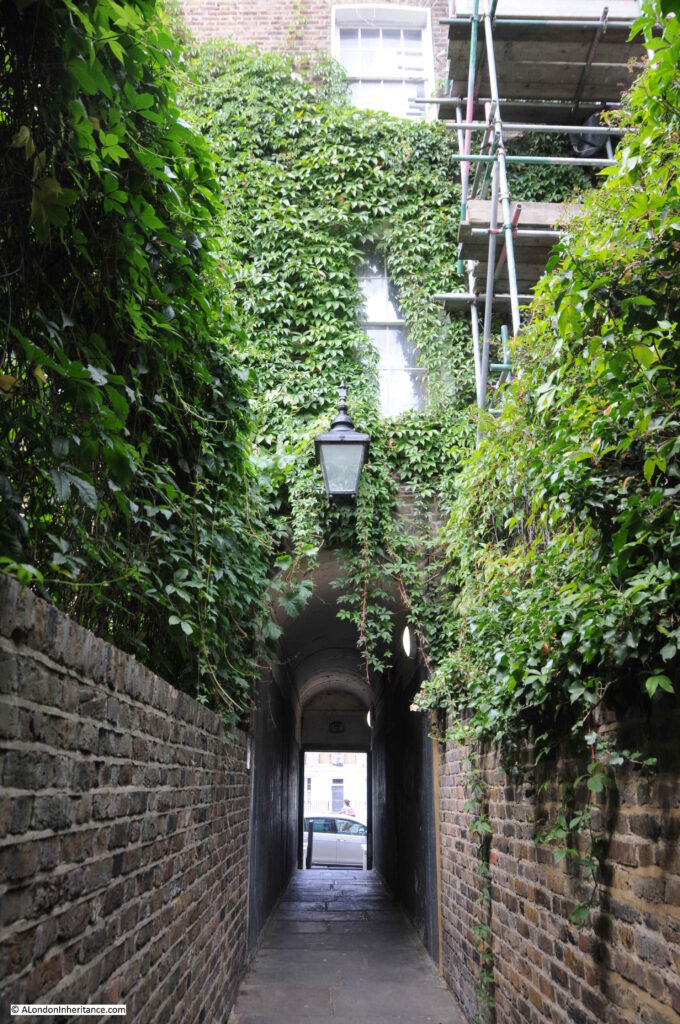 From the end of the passage, we can see the difference between the front and rear of the houses in Milner Square. The front facade was the expensive part, decorated with stonework, whereas at the rear of the houses, plain brick and no decoration. 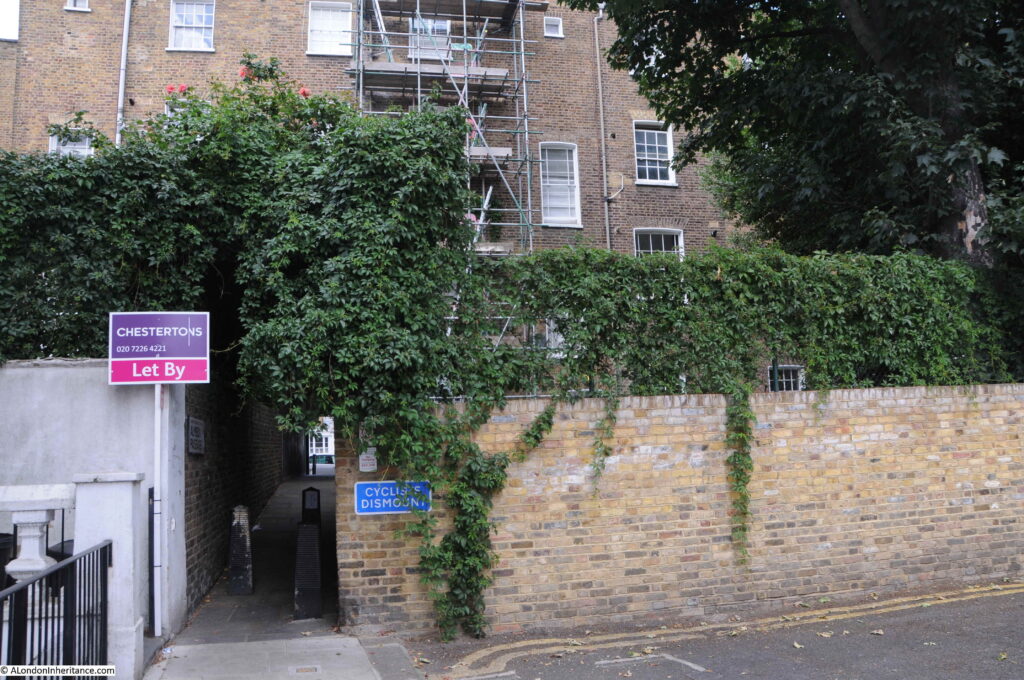 Both Gibson and Milner Squares went into decline after the last war, as did much of Islington. Reading through newspaper reports that mention the squares during the 1950s, 60s and 70s, they tell stories of those living in the squares being involved with thefts and prostitution. Even those who lived in the squares in full time jobs were involved in crimes, for example a porter who worked at Marylebone Station stealing from post bags.

The 1980s onward saw a gradual change in Gibson and Milner Squares as houses were renovated. Milner Square was one of Islington Council’s street renewal projects in 2008.

Both squares tell the history of the northward expansion of London through Islington.

Gibson Square also has visible and audible evidence of the Victoria Line that passes below the square.

Gibson Square has one final link with London’s transport system. It is the destination of run number one in the “knowledge” qualification used by London’s taxi drivers. Run number one covers the route from Manor House Station to Gibson Square.