The excavations of St. James Gardens, in preparation for the expansion of Euston Station for HS2, have been underway for some time and make the headlines every few months when a significant discovery is made. The last time was a few weeks ago when the grave of Matthew Flinders was found. Flinders was the first European to circumnavigate Australia. He died in 1814 and his headstone was removed from St. James Gardens during previous clearances and expansion of the station. His grave was assumed to have been lost, but was identified during the current excavations by the use of a lead plate on his coffin.

One year ago, in February 2018 I took a walk around the streets to the west of Euston Station to look at the streets that would be under the HS2 Platforms and Concourse. This followed on from an earlier post on St. James Gardens.

I thought that it would be interesting to take another walk around the same area, almost exactly one year later and get a 2019 update on the changes that have taken place.

Most of the roads have now been closed to traffic, although there is still pedestrian access along some of the roads immediately to the west of Euston Station. There has been very little demolition yet, just lots of scaffolding and hoardings. The main focus of work appears to be at the location of St. James Gardens.

The following map provides an overview of the area and I have marked the locations of the photos that appear in the post. 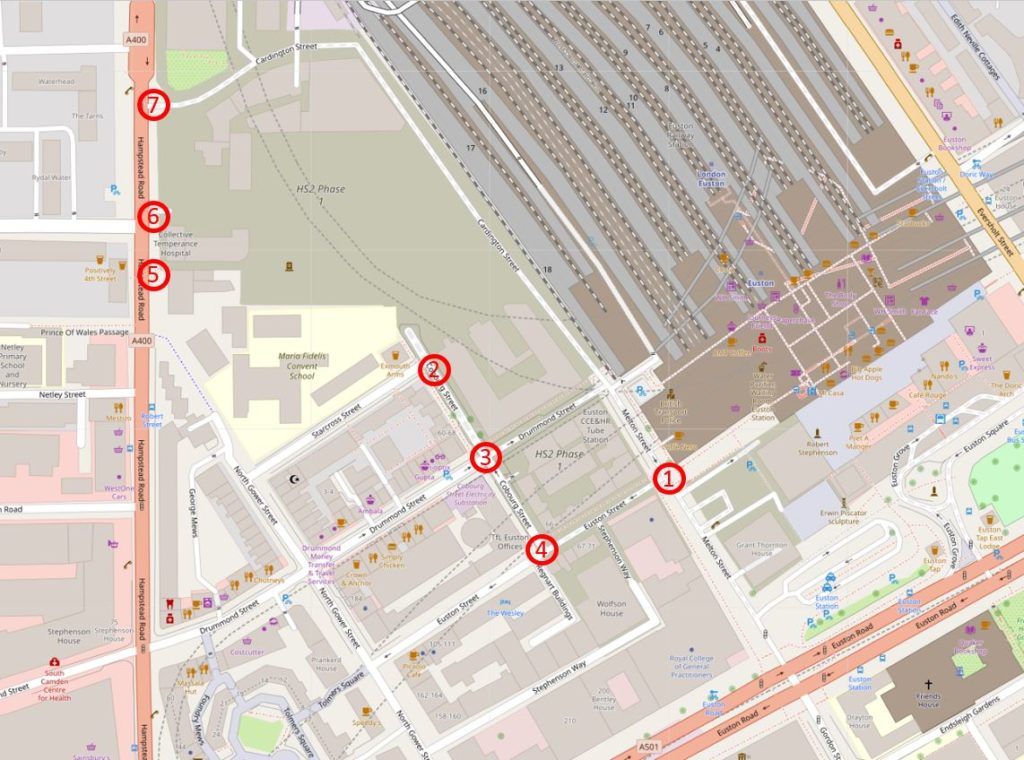 Euston Station is the large area in the upper right part of the map. The current HS2 expansion of Euston is roughly covering the area bounded by where I was taking photos, although the final area will be larger and there is already work commencing between the station and Euston Road.

The first few photos are from location one. Leaving Euston Station, this is the view towards Euston Street. 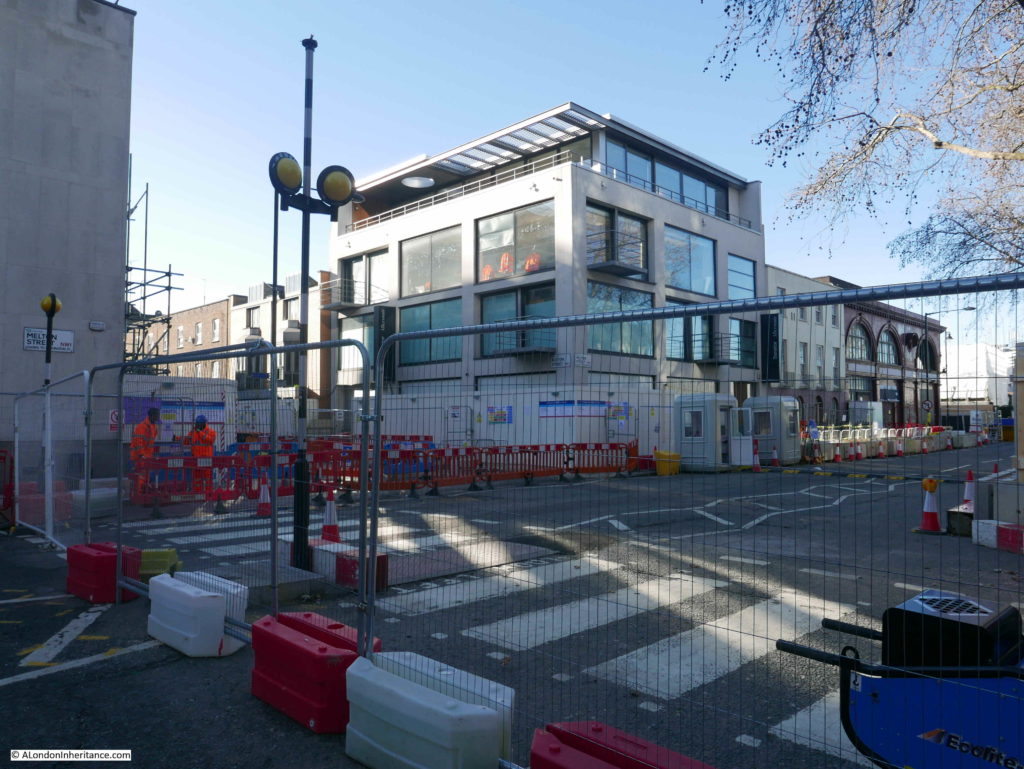 It is possible to walk north a short distance to the point where Cardington Street began. This is the street that ran to the east of St. James Gardens. 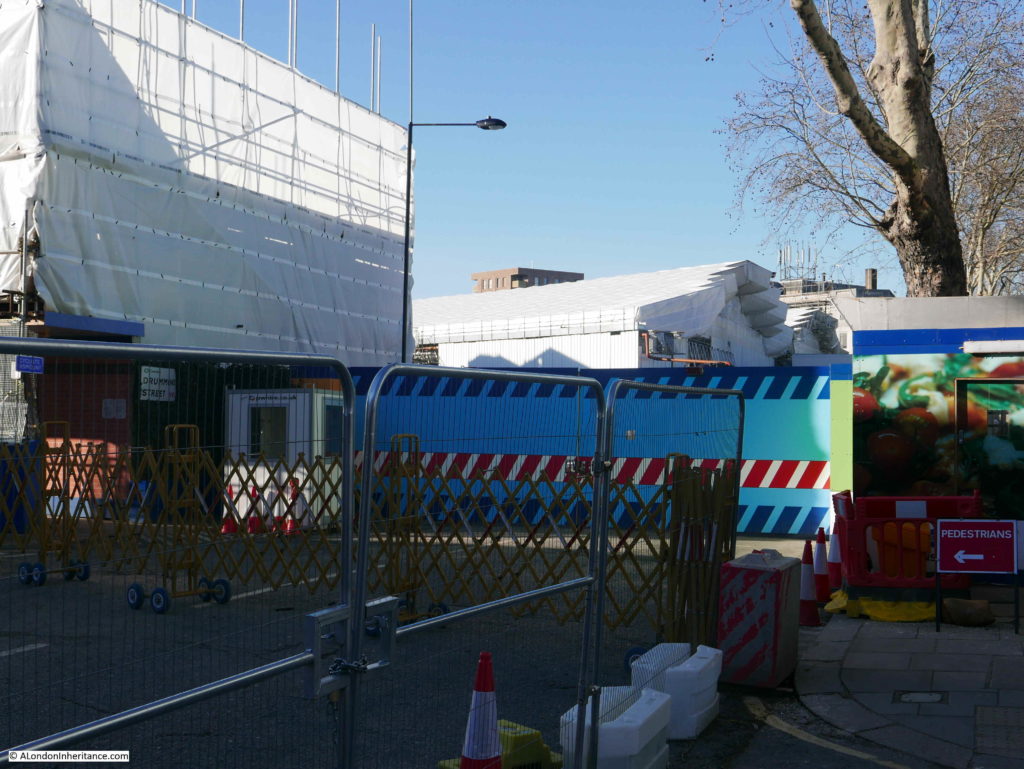 The following view is looking up Cardington Street. The iBis Hotel was on the left of the street. The large white marquee is covering the excavations of the graveyard at St. James Gardens. The size of the marquee provides some idea of the scale of work involved. 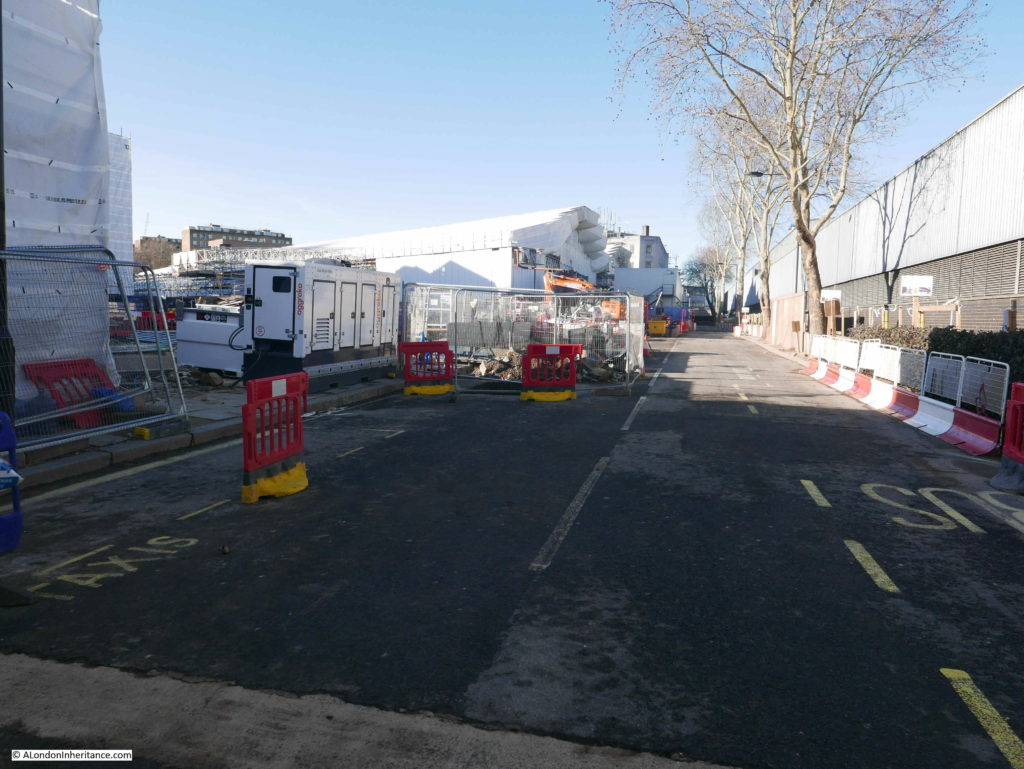 On the corner of Melton Street and Drummond Street is the original Euston station of the Charing Cross, Euston and Hampstead Railway. The station is one of Leslie Green’s distinctive station designs. 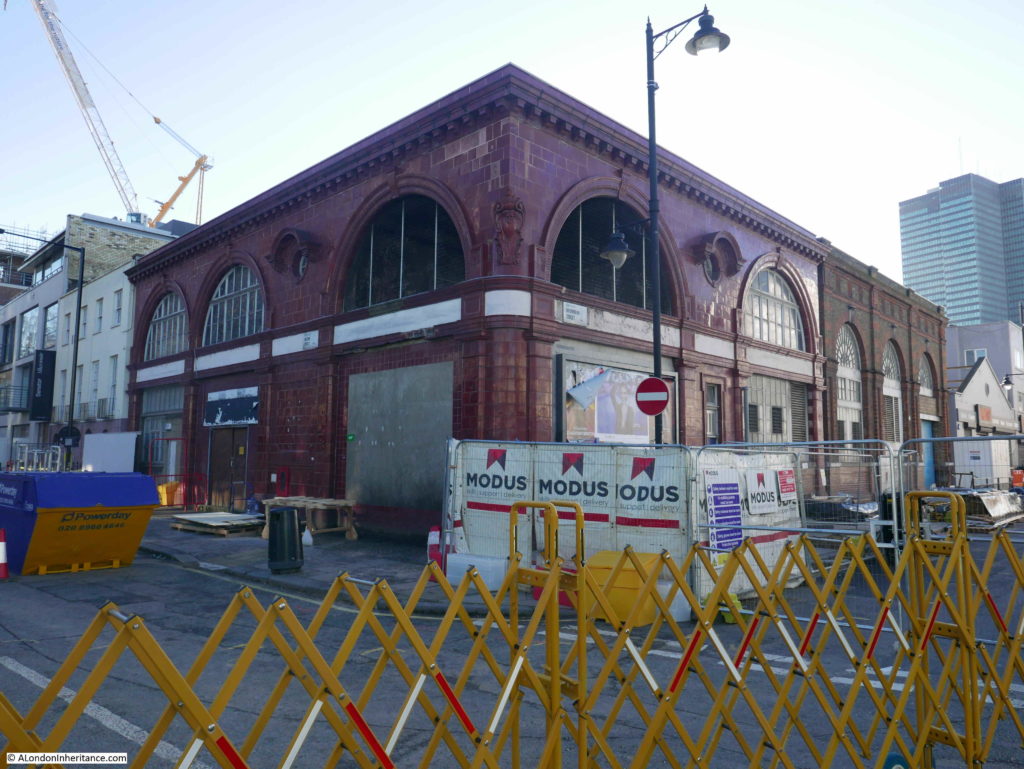 Looking back along Melton Street towards Euston Road. 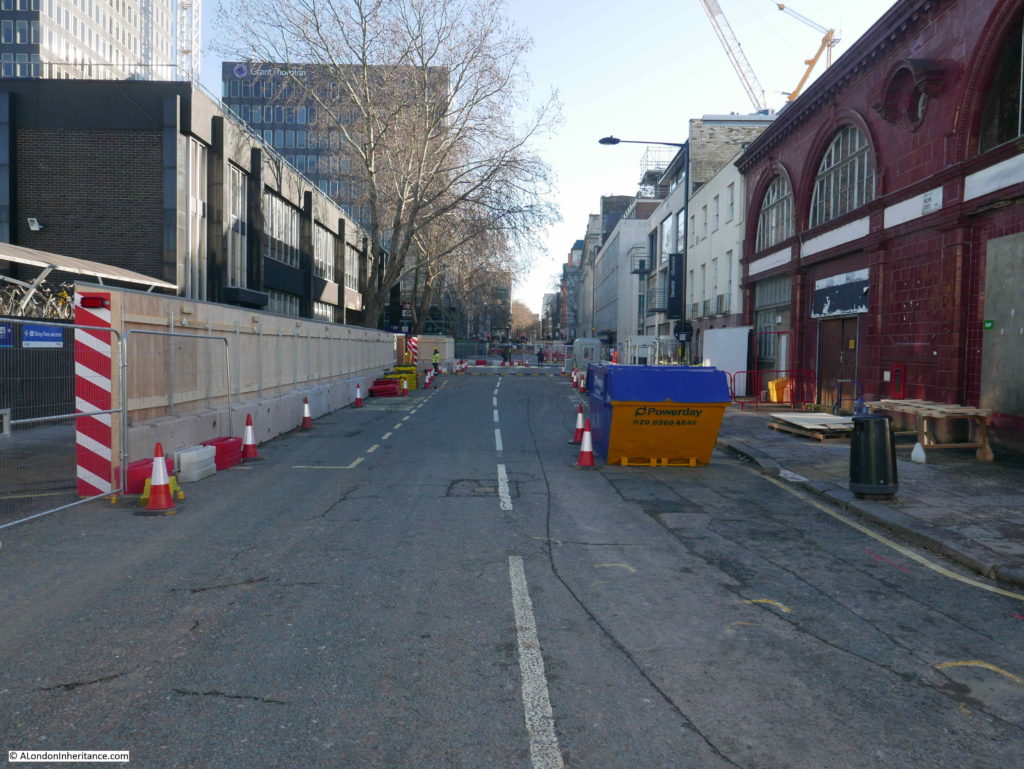 Although closed for traffic, this part of Drummond Street is still open for pedestrians, so I walked down and turned right into Coburg Street. This section is still open for traffic and the Exmouth Arms is open (see location two). The large marquee over the St. James Gardens excavations can be seen in the background. 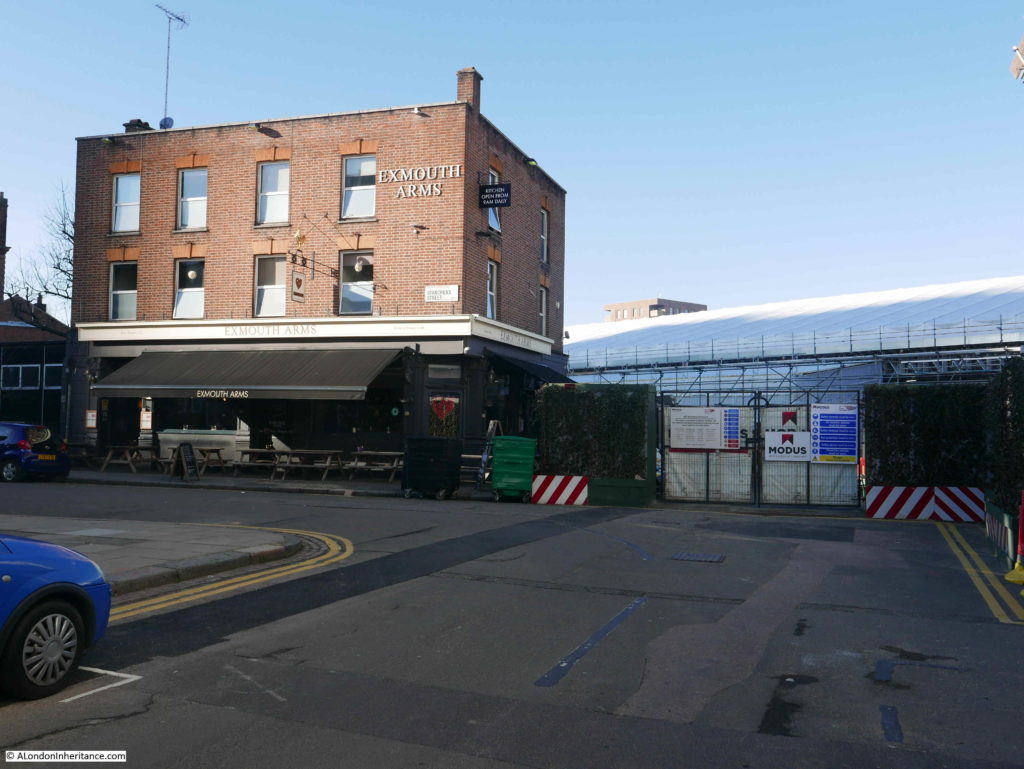 Looking back down Drummond Street from location three in the map. 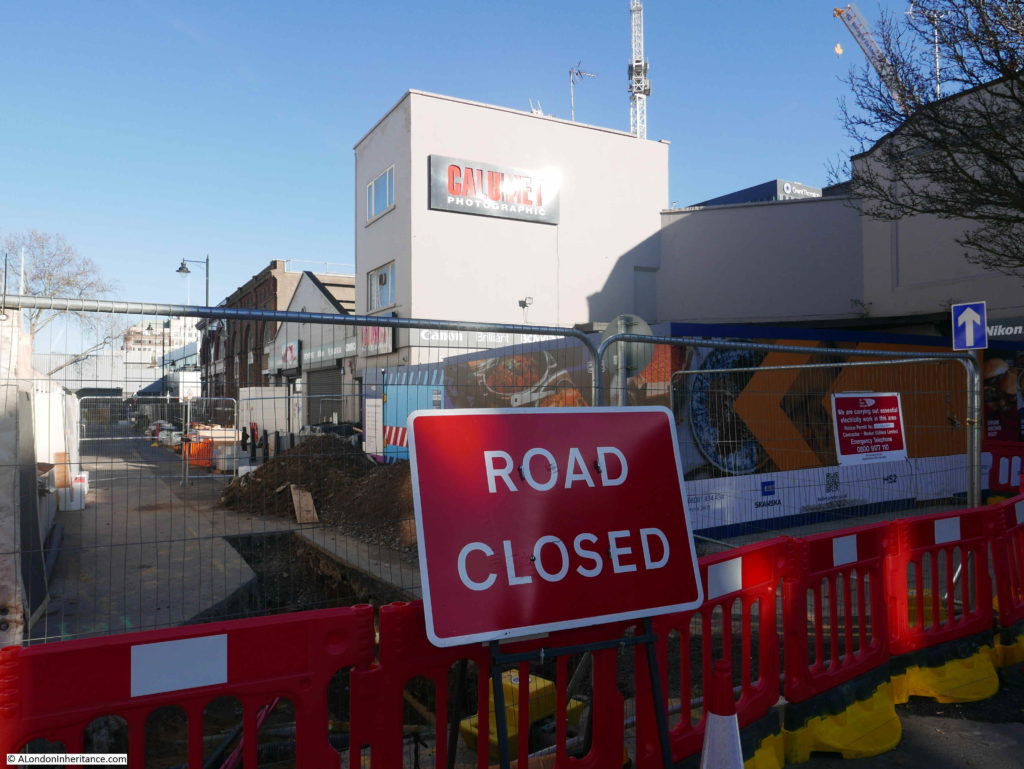 The other side of Coburg Street is open, but the buildings alongside are hoarded off, presumably waiting for demolition. 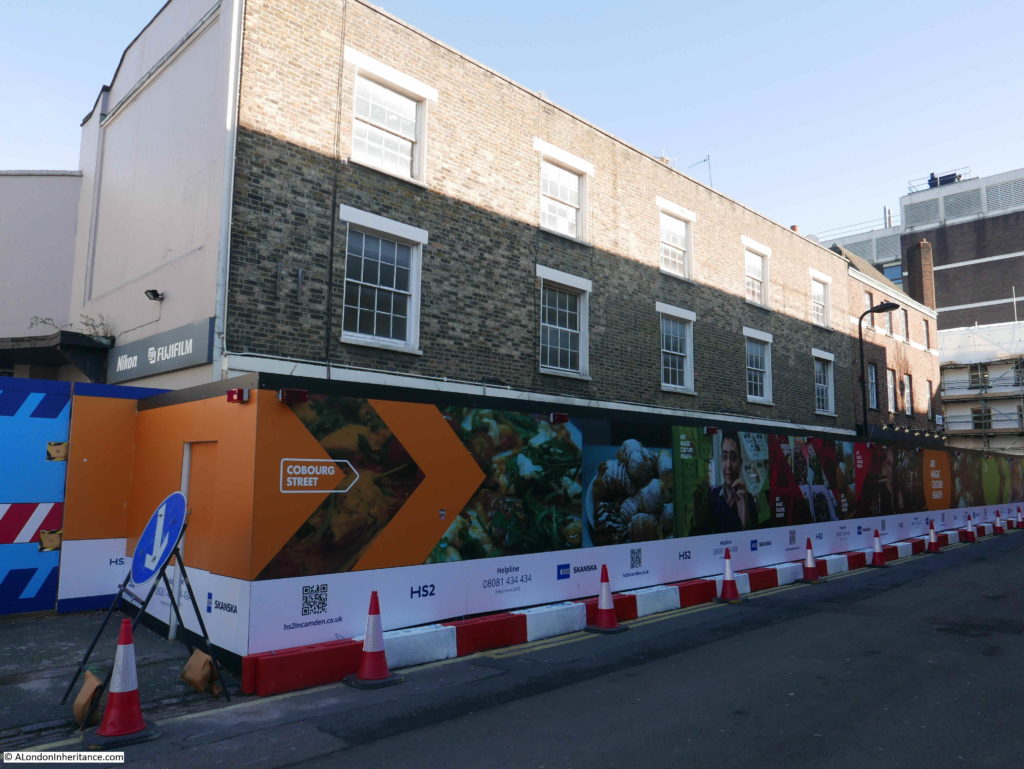 The following photos are from location four. At the junction of Coburg Street and Euston Street, yet more buildings covered in scaffolding. 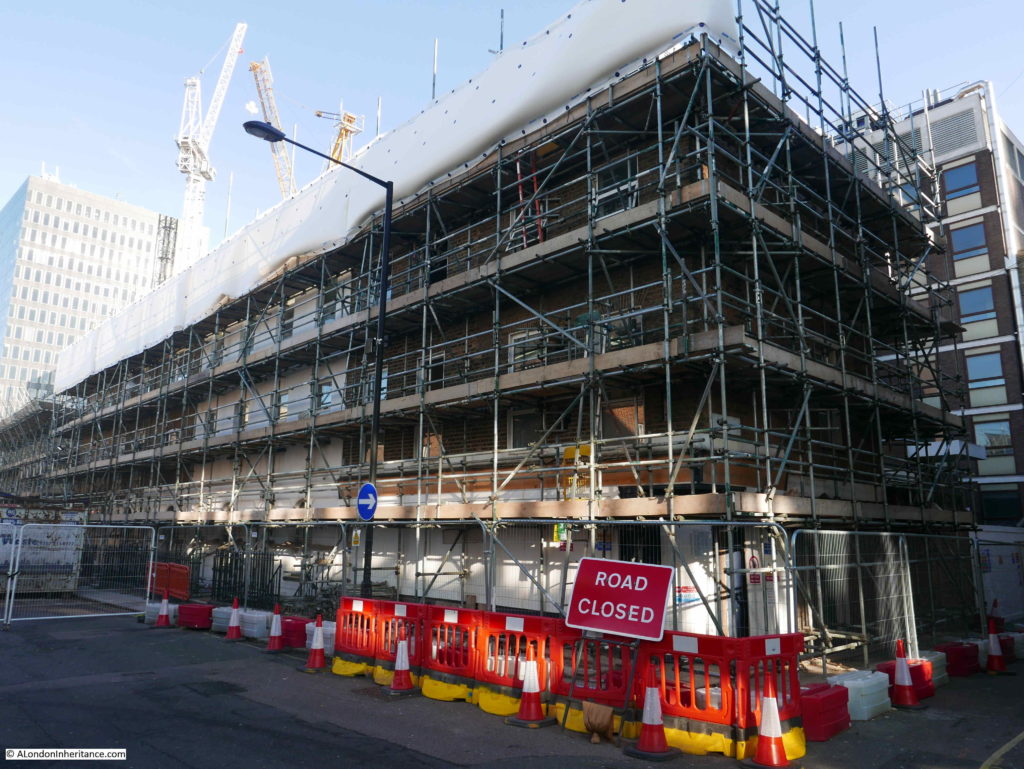 The Bree Louise pub is still there, but fenced off. 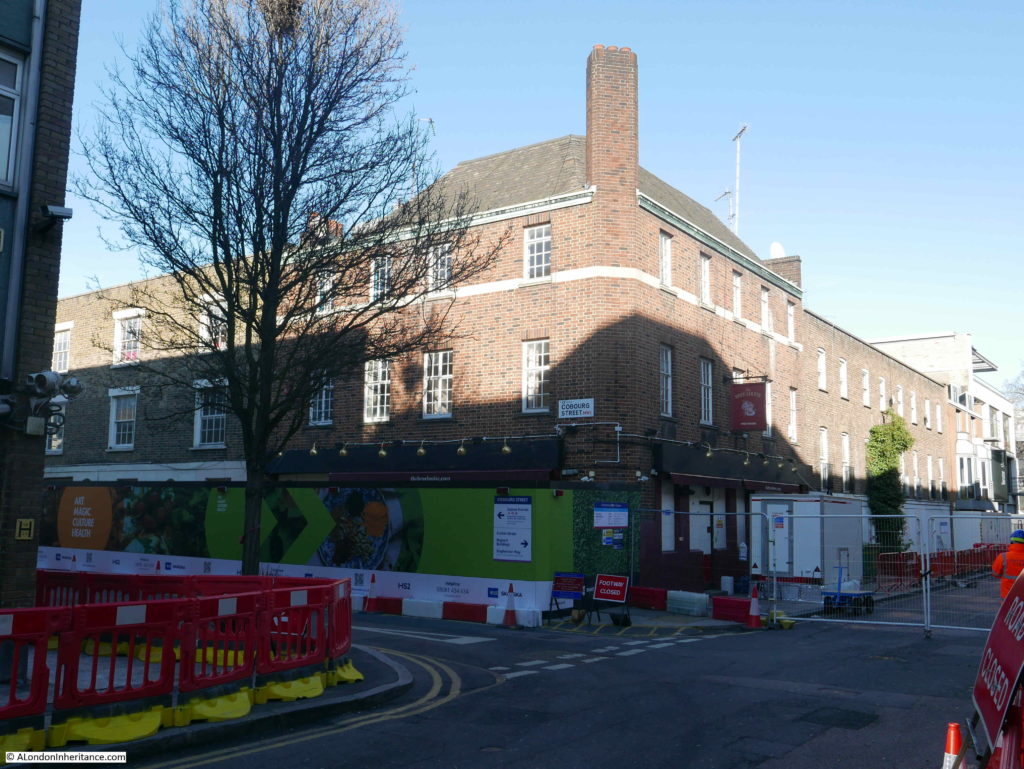 Back to the junction with Drummond Street and this is the view along the northern leg of Coburg Street. The old iBis Hotel is underneath the sheeting on the right. 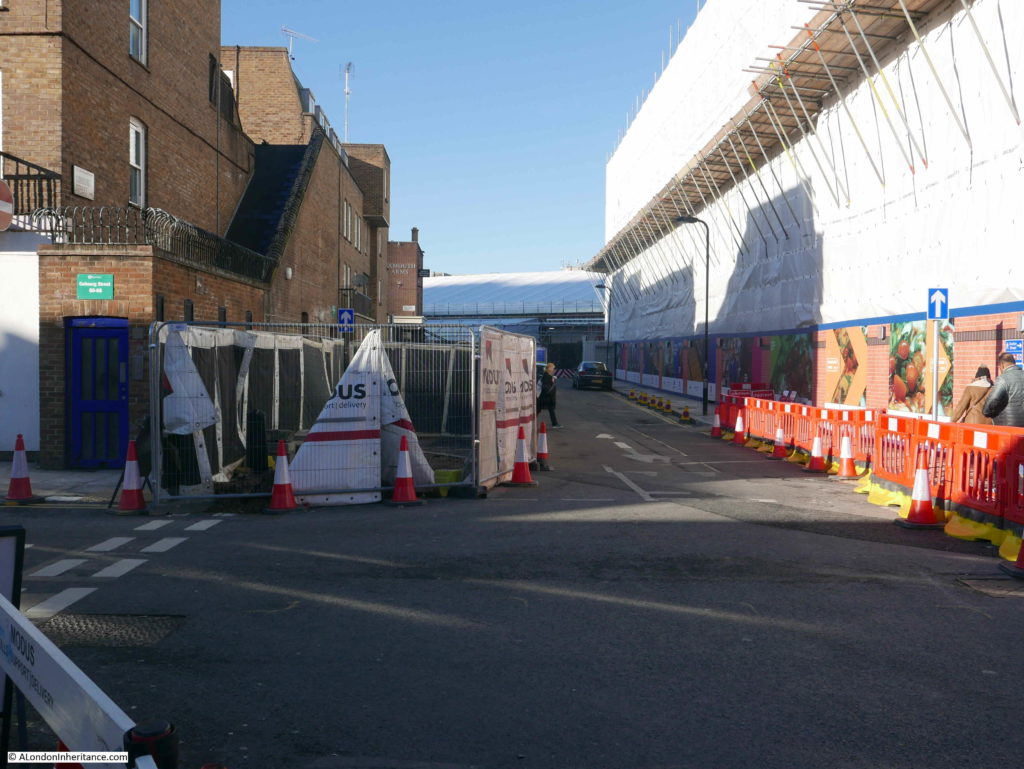 I then walked up to Hampstead Road to see what impact HS2 preparation is having. Most of the buildings along a significant section of the east side of Hampstead Road have been demolished, including the old London Temperance Hospital. This is the view (location five) of the rear of the marquee covering the St. James Garden’s excavations. 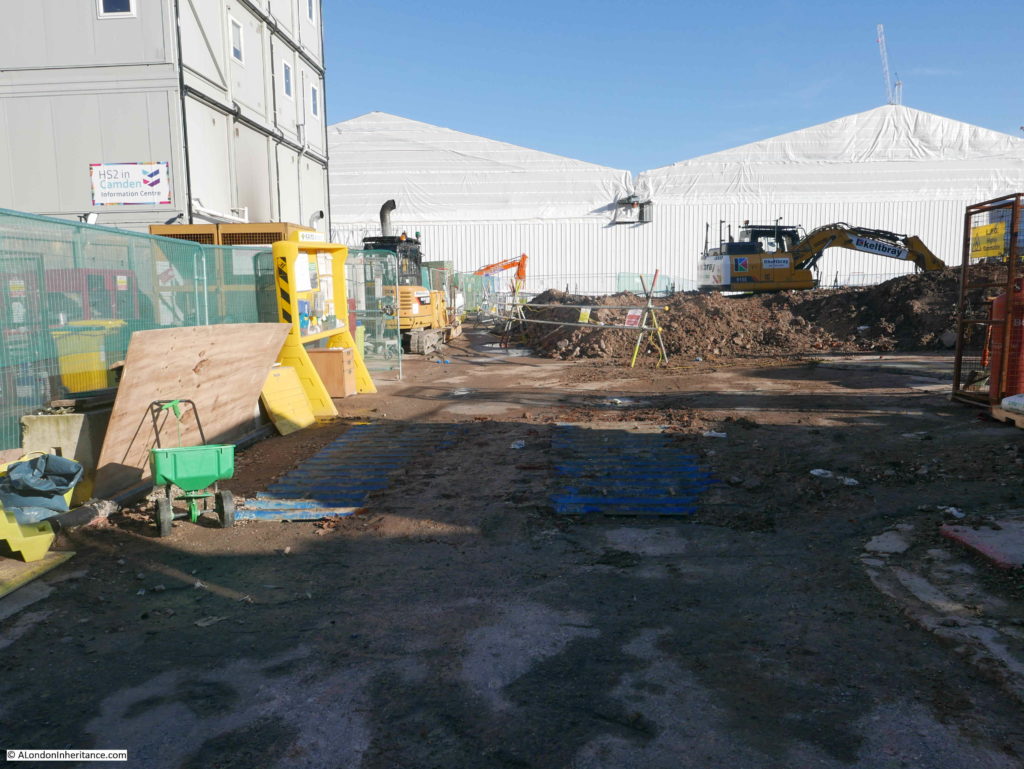 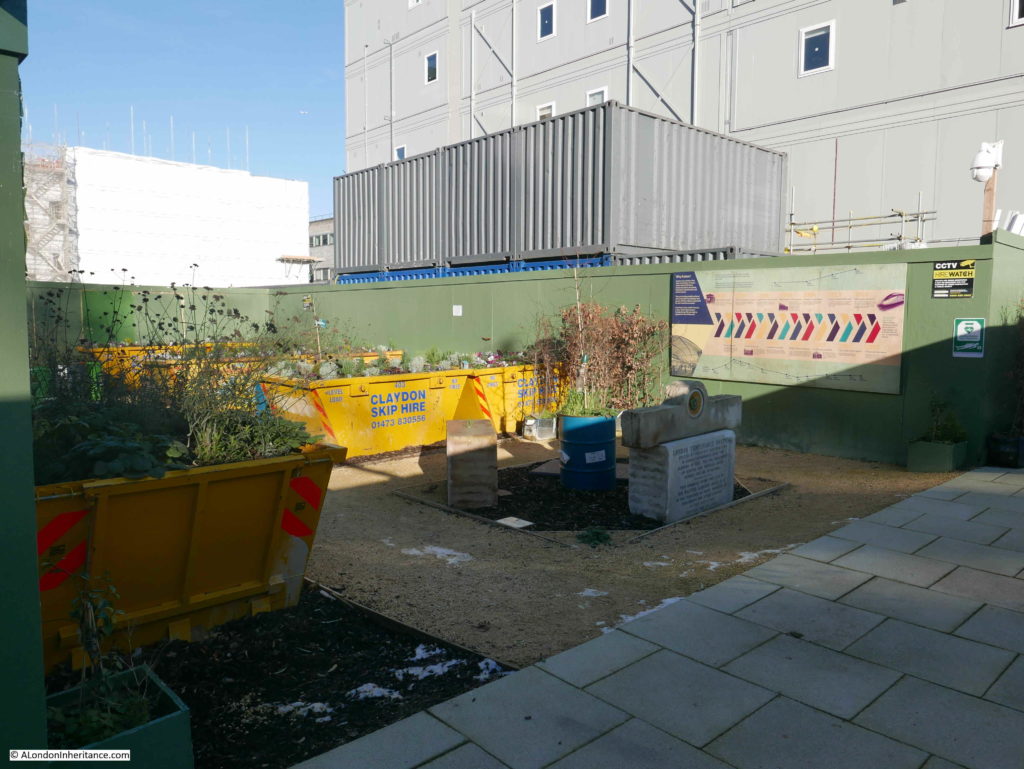 On display in the space are the foundation stones recovered from the London Temperance Hospital. 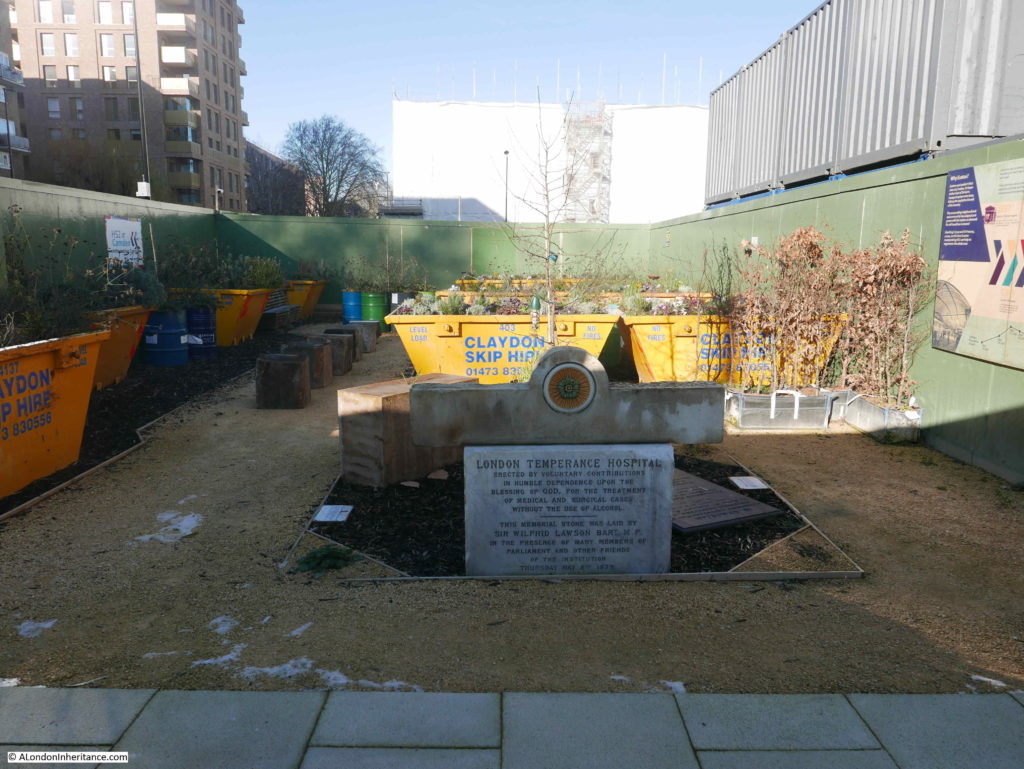 The first foundation stone, with above, a decorative lintel retrieved from the main building. 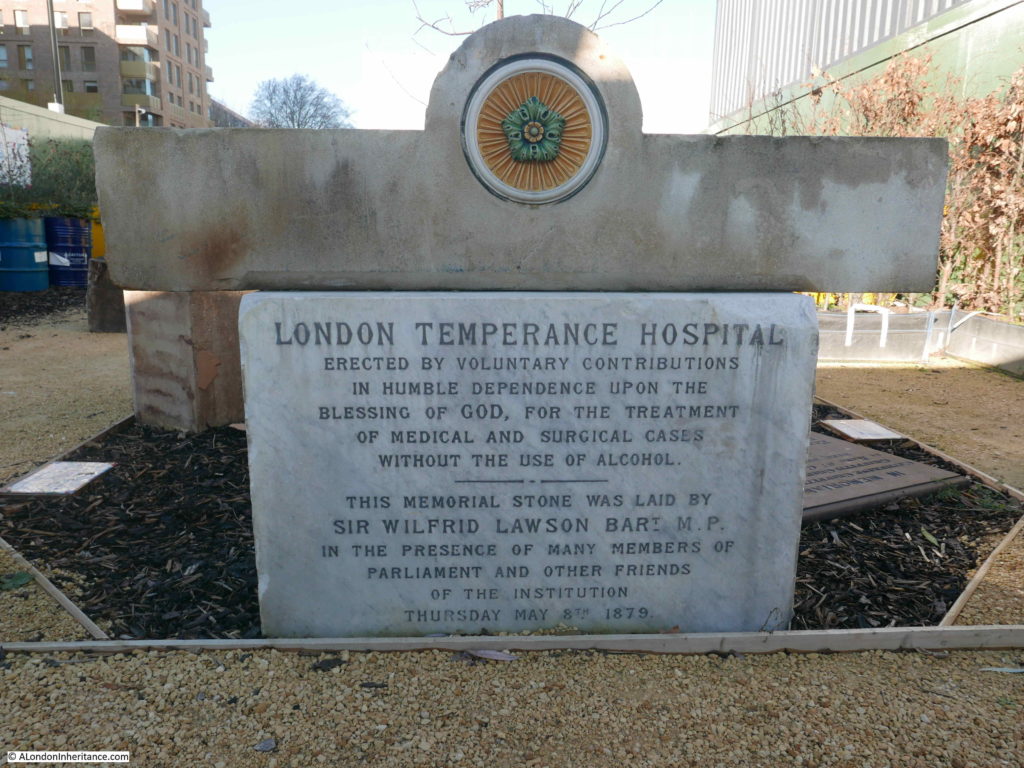 An information note advises that time capsules were retrieved from underneath the foundation stones and that these are currently being conserved. Unfortunately there is no information on what was in the time capsules.

There is also a memorial stone recovered from St. James Gardens. This is a Ledger Stone for the Griffiths family, made of Welsh slate possibly to reflect their Welsh heritage. 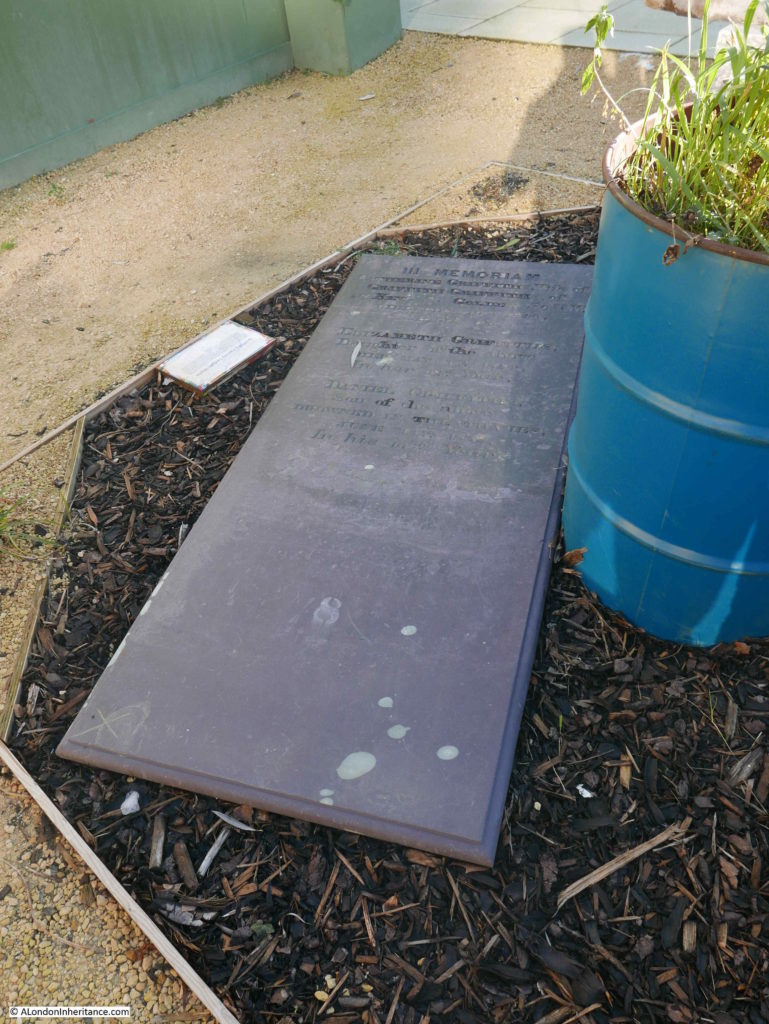 The second foundation stone from the London Temperance Hospital. 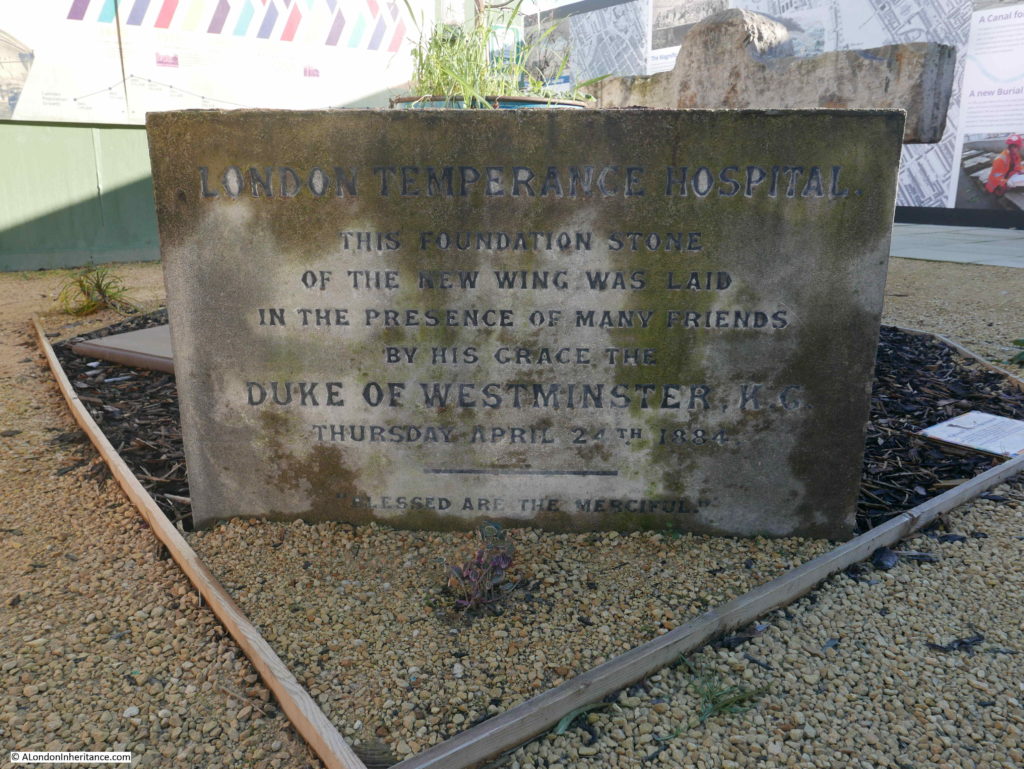 There are a number of large information panels which tell the history of the area and the impact the expansion of the railways. 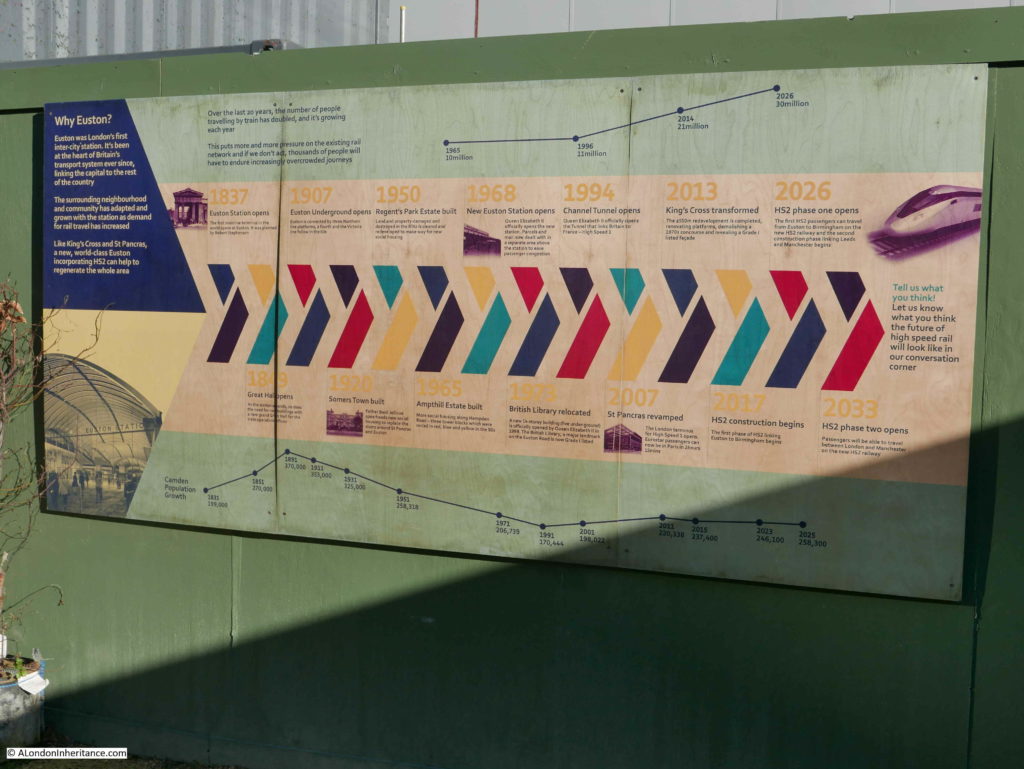 The railways have had a significant impact on the area, HS2 is just the latest expansion. 19th century expansion of Euston Station had already taken a section of St. James Gardens and the construction of the tracks into the station had a major impact on the graveyard of St. Pancras Old Church.

Information panels showing the history of the wider area. 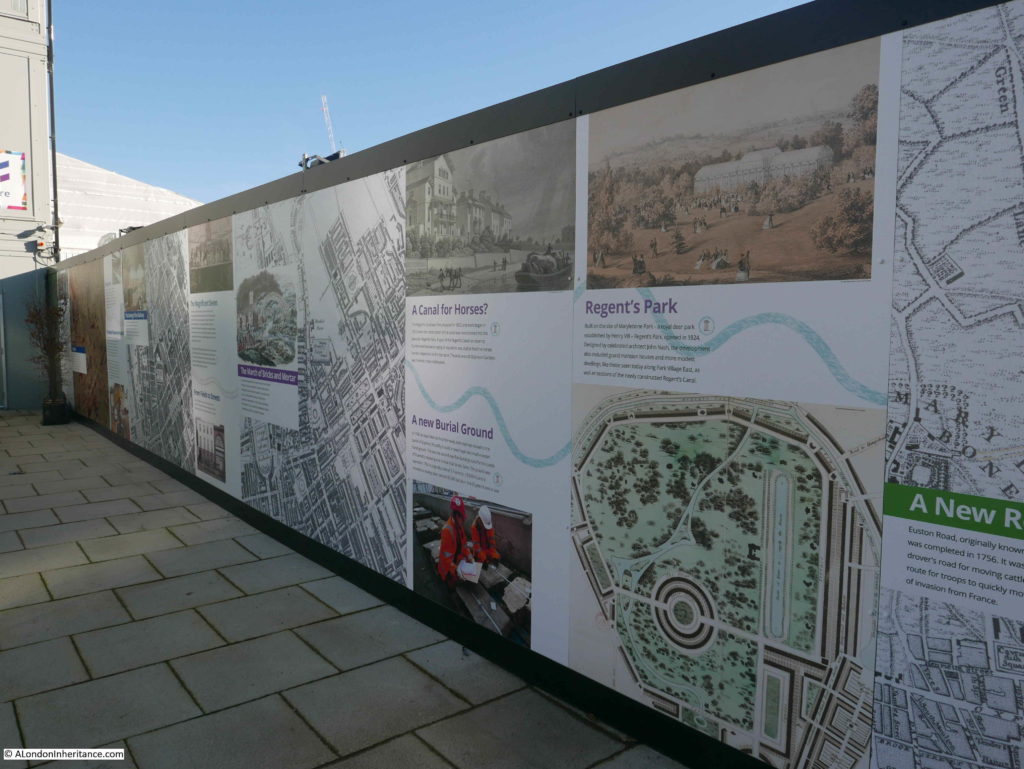 This was the northern end of Cardington Street which is closed a short distance along (location seven in the map above). I suspect many satnavs have not been updated as in the short time I was there, a number of cars turned into the street and had to turn round. 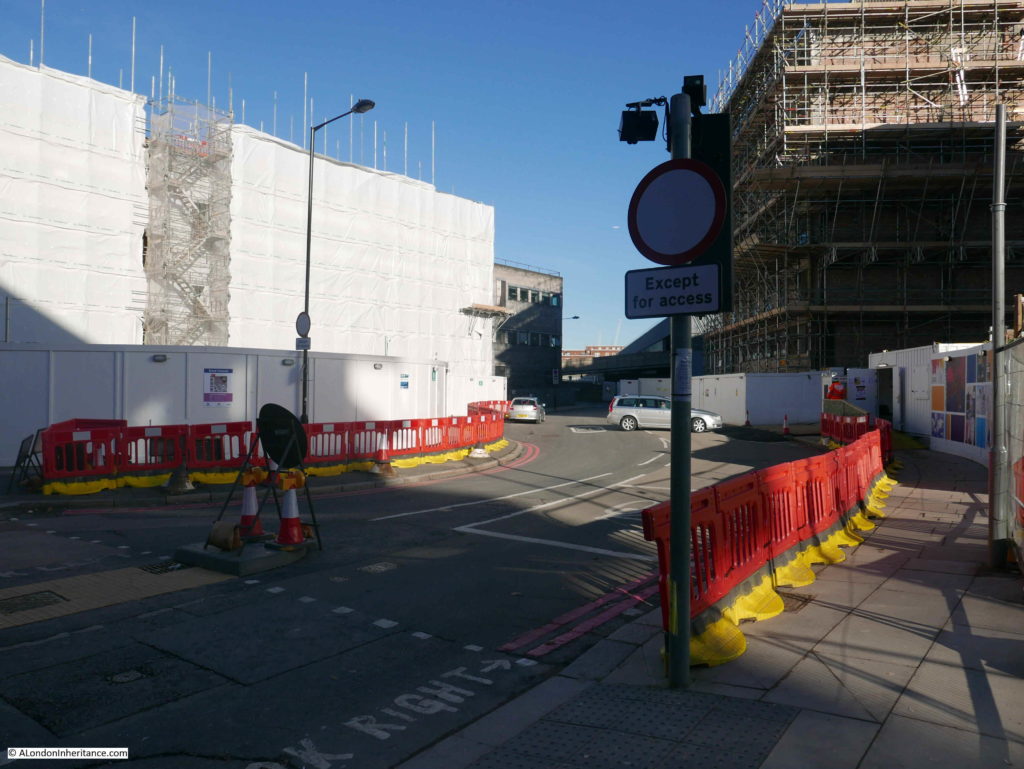 View along Hampstead Road to the south. The area to the left of the photo will look very different when HS2 is complete. 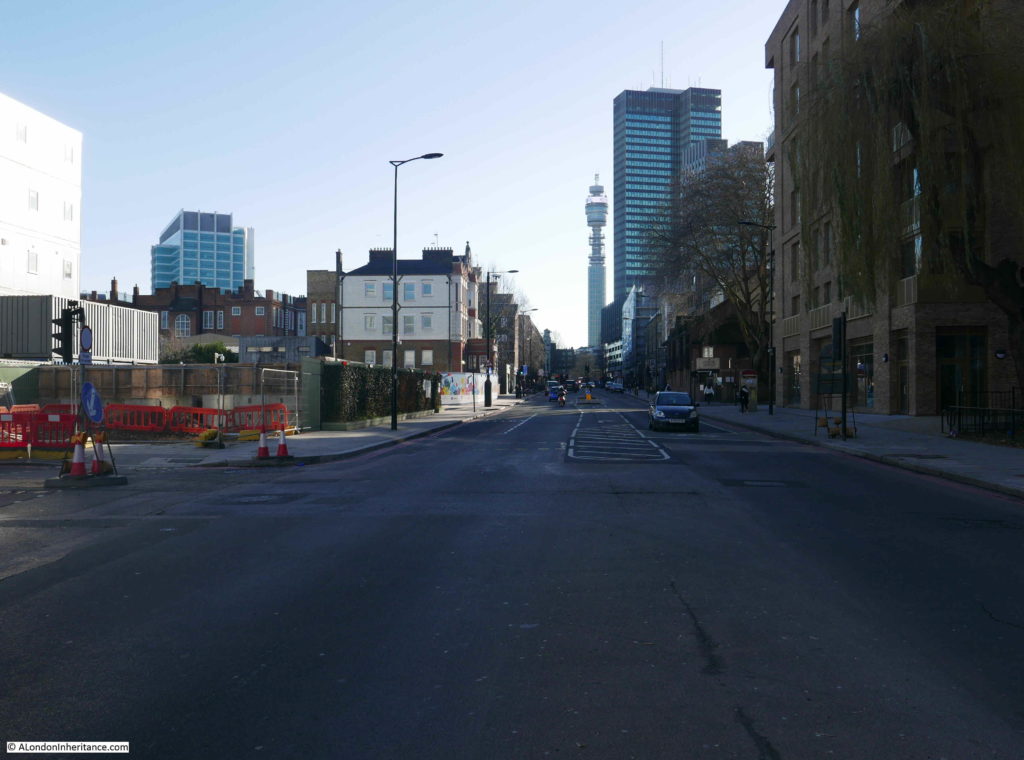 In the year since I last visited the site, the main focus of work appears to be at the old graveyard at St. James Gardens which is not surprising given the considerable amount of archaeological excavation and investigation that is needed.

It is still possible to walk many of the streets, although for how much longer is not clear, the majority of buildings lining these streets appear to be ready for demolition.

It will be interesting to make a return visit in February 2020 to see how far work has progressed. What is clear is the scale of the impact that HS2 will have on Euston. This will be a very different station when the new service is operational.