This weekend is the fourth anniversary of the blog – a point I did not expect to reach when starting out.

I would really like to thank every reader and subscriber, for your comments and e-mails, and just for knowing that there is someone out there reading my weekly exploration of London.

For this anniversary, I hope you will permit me three self-indulgent posts, today, Saturday and Sunday.

The post today is a return to the site of my most read post from the last year. Back in August I wrote about the closure of St. James Gardens as part of the preparations for the HS2 developments at Euston Station.

I have been trying to find the time to get back to the area and see what has happened since August, and finally had some spare time a couple of Saturdays ago.

The day of my visit was unfortunately wet and gloomy however this was rather suitable for the subject.

I started my walk around the area in Melton Street, along the western edge of Euston Station, where there is an information stand with a map of the area. 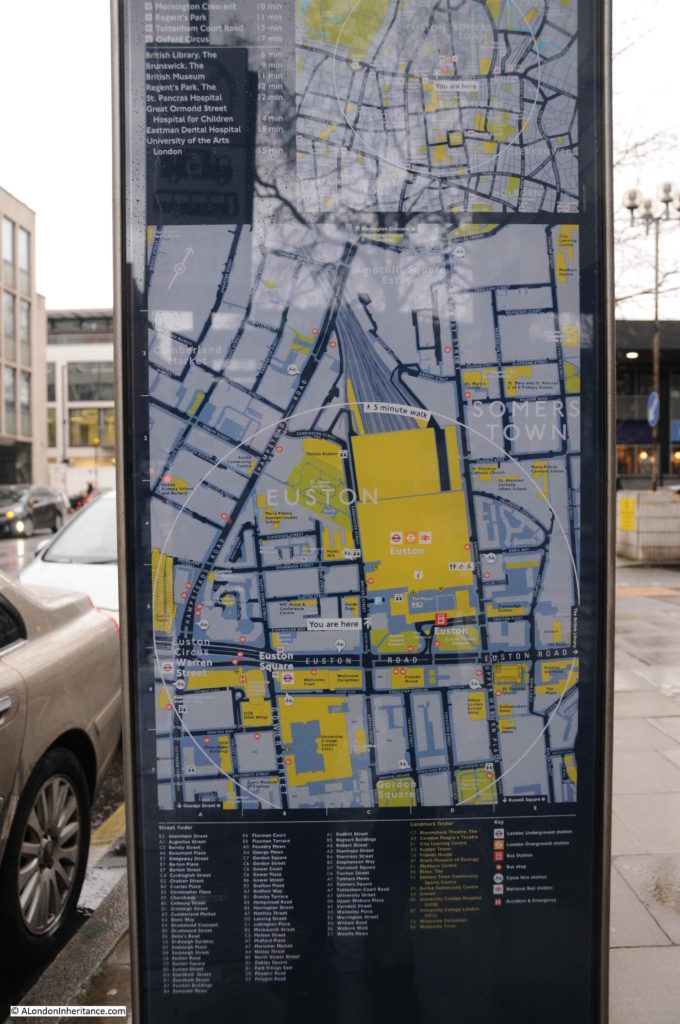 I have put a red rectangle around the streets that I will walk today. The map still shows the area before the closure of St. James Gardens which can be seen at the top of the red rectangle.

HS2 platforms and concourse will occupy this space as the station extends to the west to accommodate the extra rail tracks. 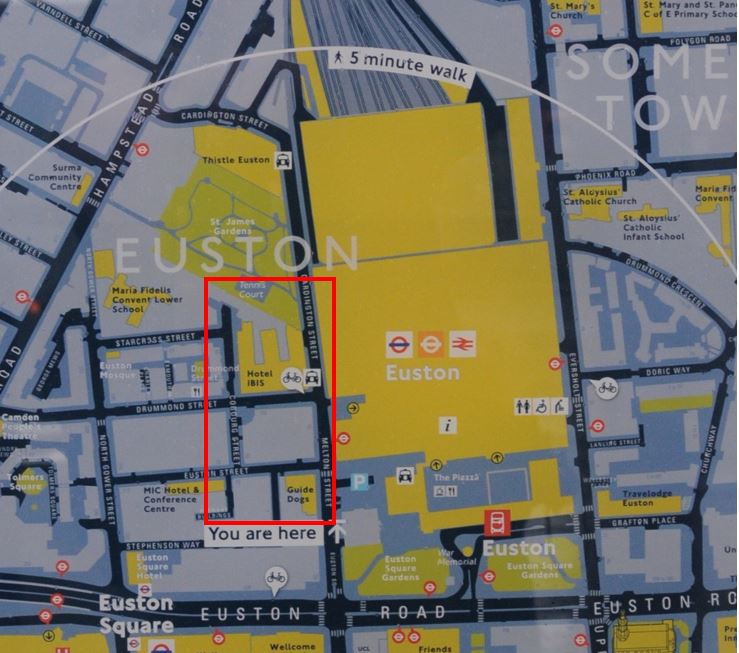 Starting off in Melton Street, this is the view towards Cardington Street (which runs past St. James Gardens), and is now closed off. White wooden hoardings now block any further access along the street. 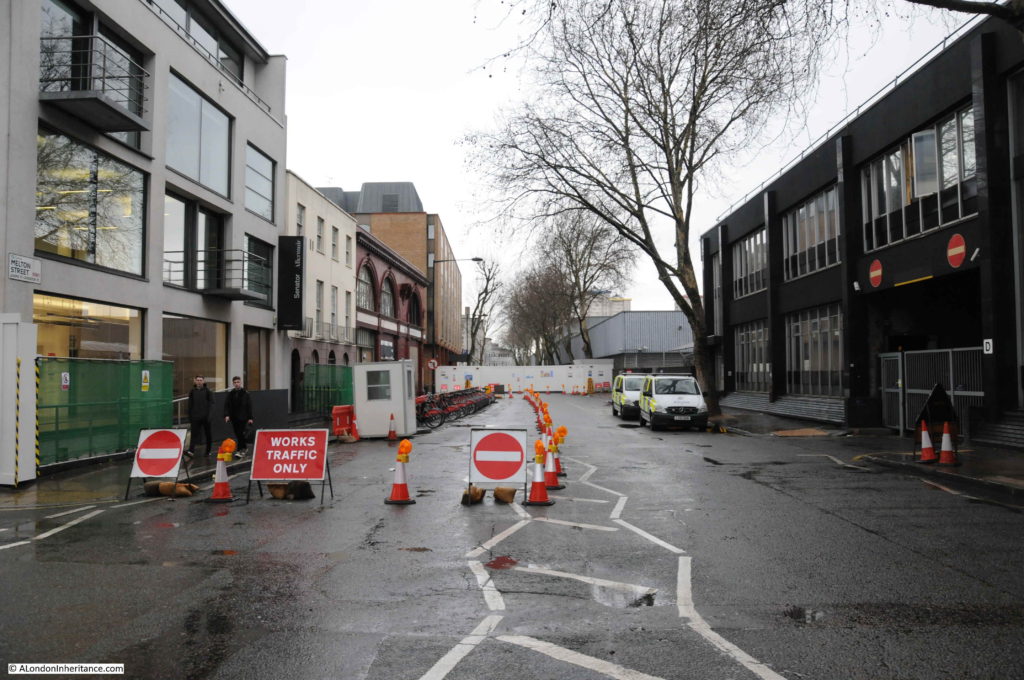 An Ibis Hotel occupied the building on the left, and just past the hotel is St. James Gardens. 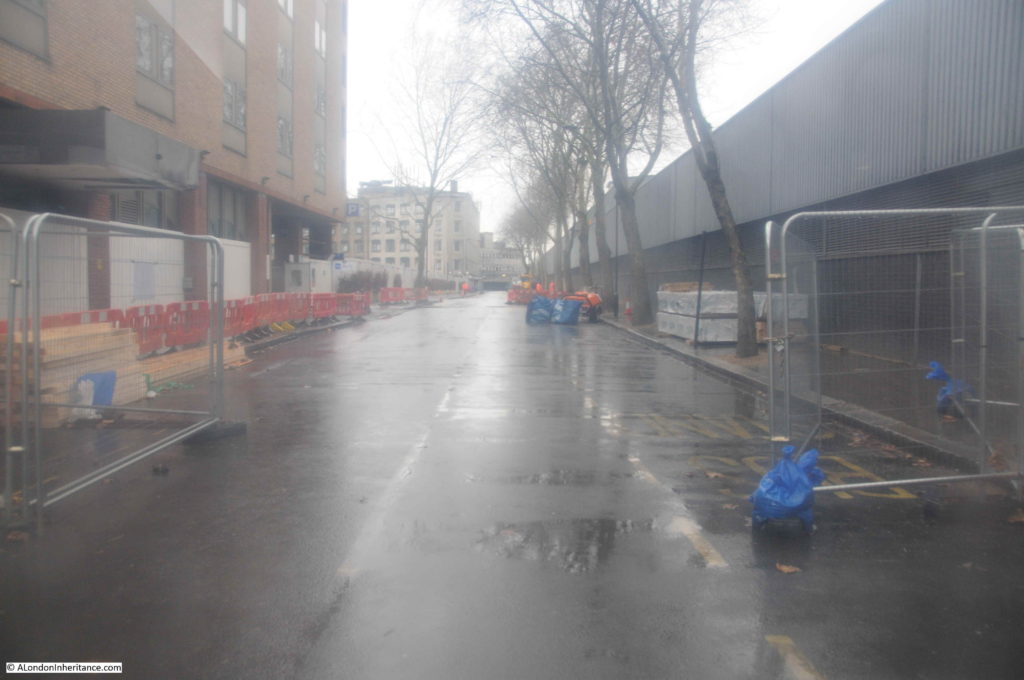 I took some photos of Cardington Street last August just after St. James Gardens were closed. The following photo shows the corner of the Ibis Hotel with the trees of the gardens in the background: 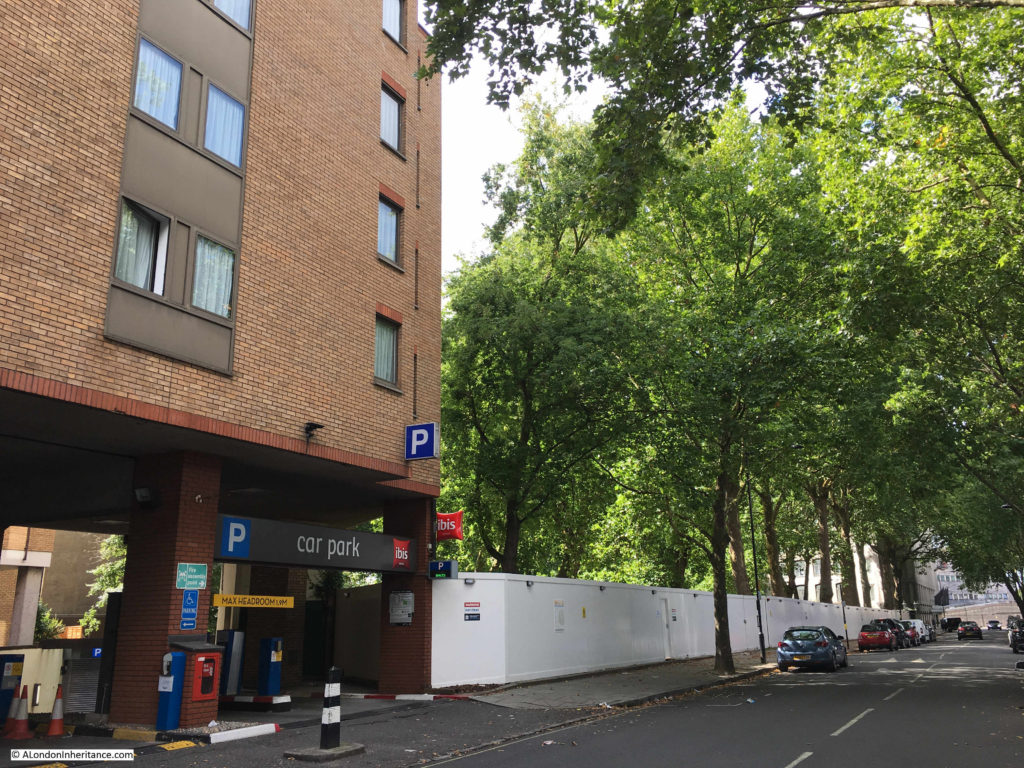 The following photo was looking down Cardington Street towards the Ibis Hotel and Euston Road. It appears that all the trees in the gardens have now been removed. 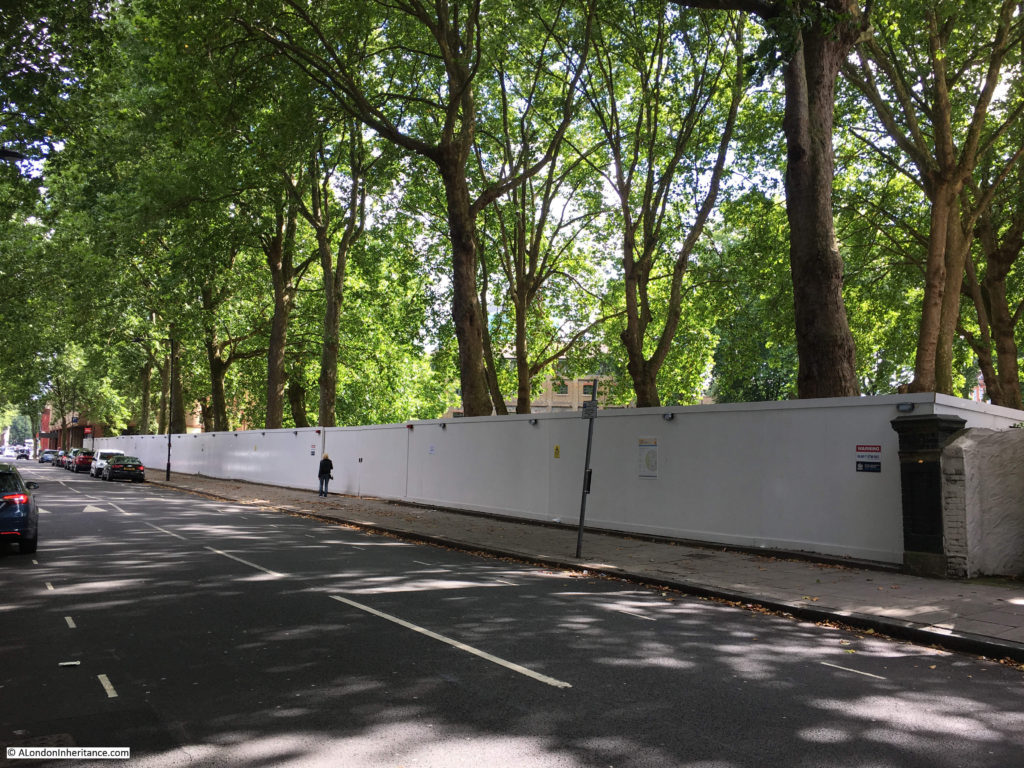 Even relatively recent buildings will suffer the same fate as their older neighbours. This new building is on the corner of Melton Street and Euston Street. Further along is one of Leslie Green’s distinctive underground station designs. This was the entrance for one of the Hidden London tours I wrote about in this post on the lost tunnels of Euston Underground Station. 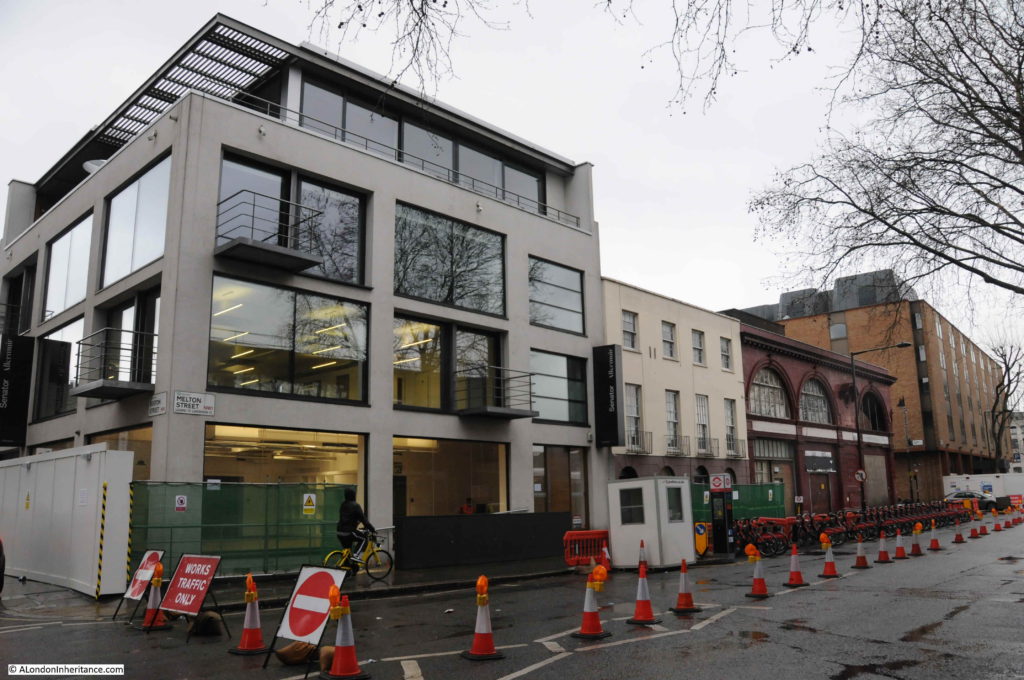 This is the view looking up Euston Street. 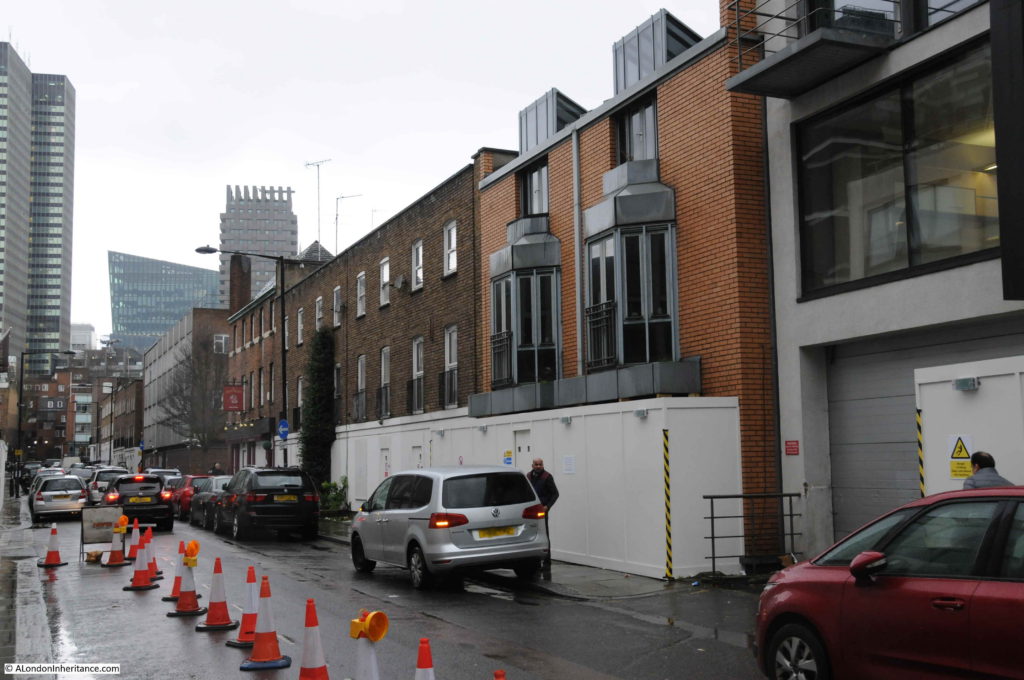 The opposite side of Euston Street. Buildings on both sides are now closed with hoardings protecting their ground floors. 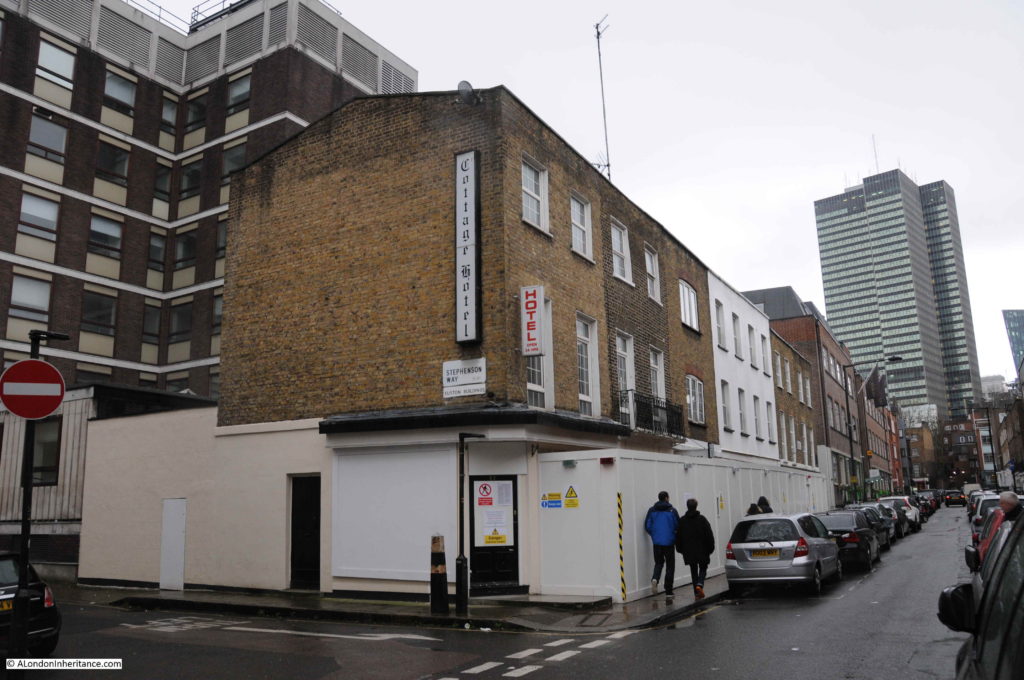 At the junction of Euston Street and Cobourg Street is the pub, the Bree Louise. 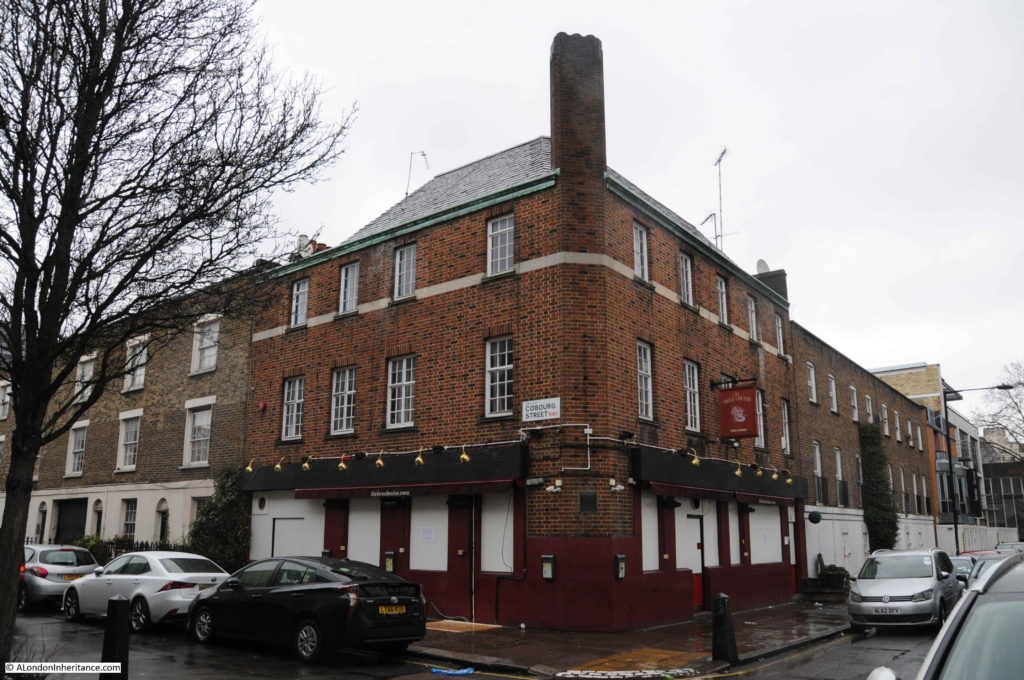 The pub dates from the early 19th century and was the Jolly Gardeners until being renamed by the most recent landlord as the Bree Louise, the name of the landlord’s daughter who died soon after birth.

The Bree Louise was a basic, but superb local pub and it is sad to see how quickly after closing at the end of January, the pub has taken on such air of being abandoned. 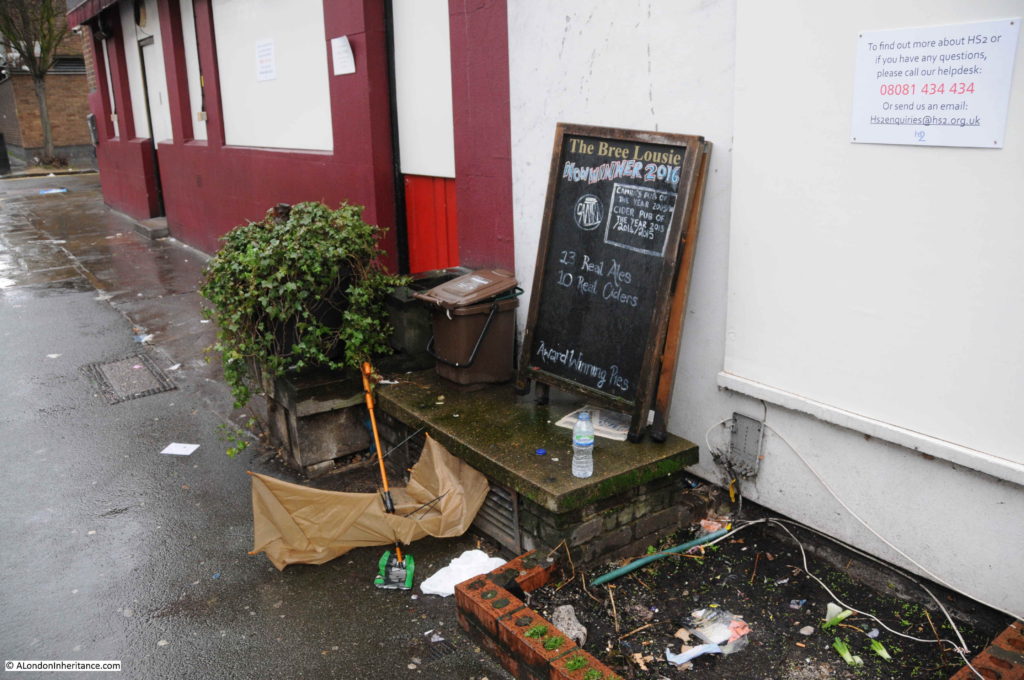 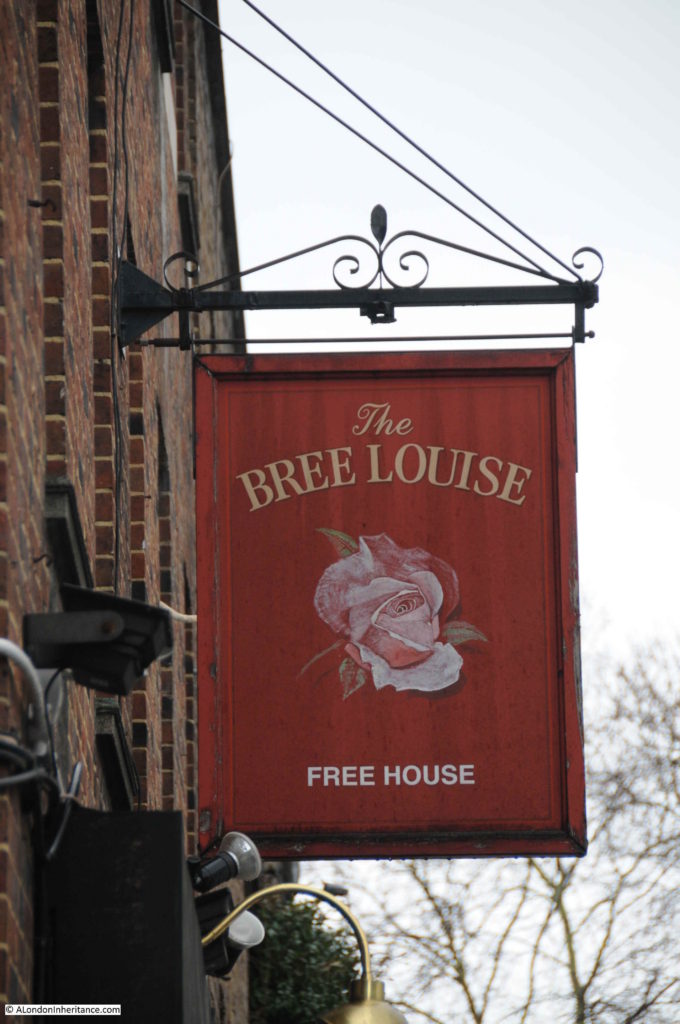 As are adverts of when the Bree Louise was North London’s Camra pub of the year in 2016: 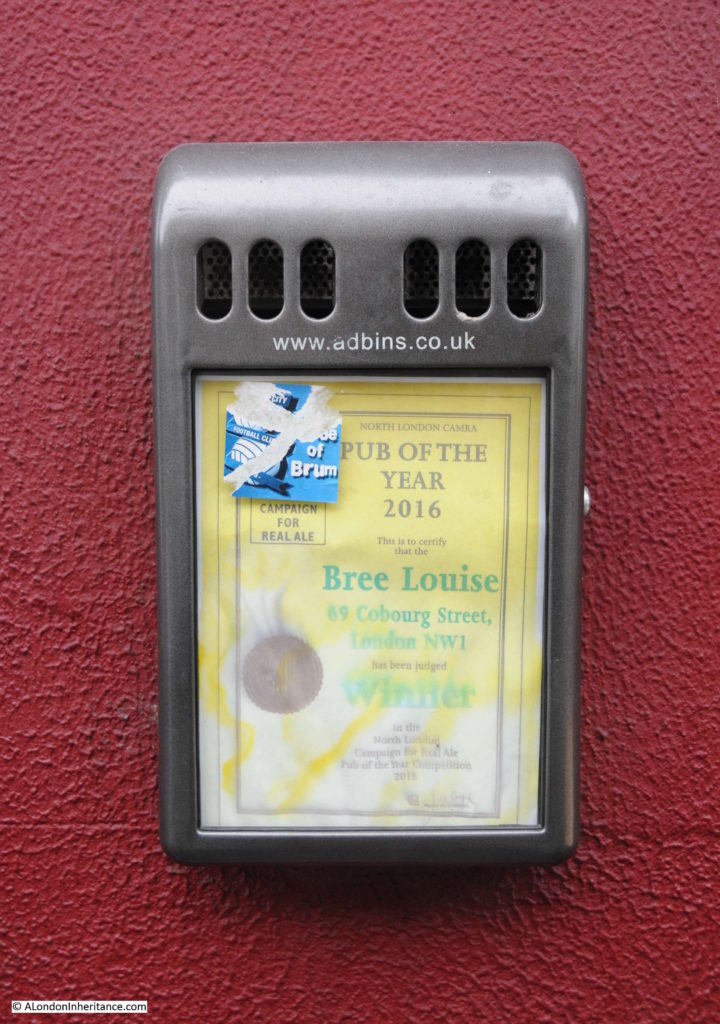 This is the view in Cobourg Street looking back towards the Bree Louise. There is a row of houses, which although not yet closed off, and some still looking occupied, will also be under HS2’s platforms. 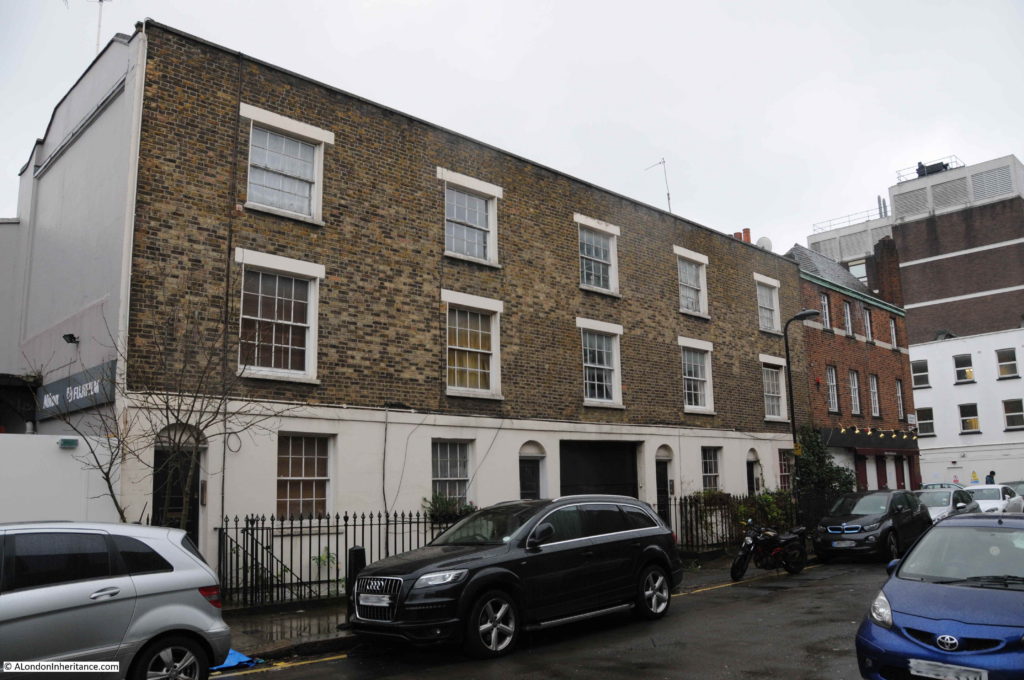 On the corner of Cobourg Street and Drummond Street is the old Calumet photographic shop: 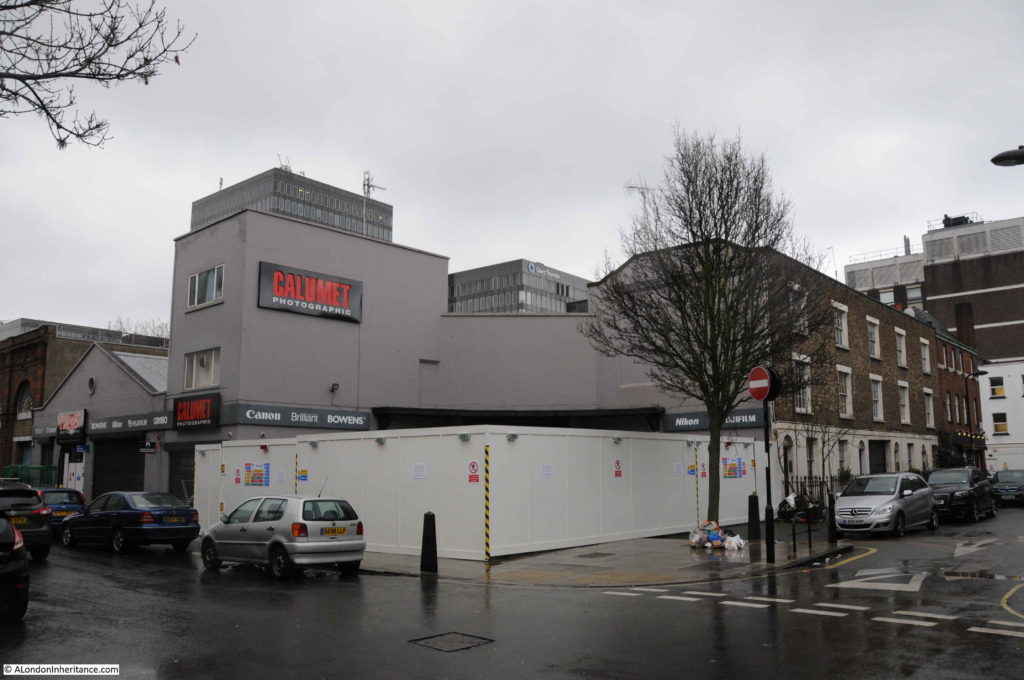 Cobourg Street continues after crossing Drummond Street and it is along here that the rear of the old Ibis Hotel can be seen, again closed. 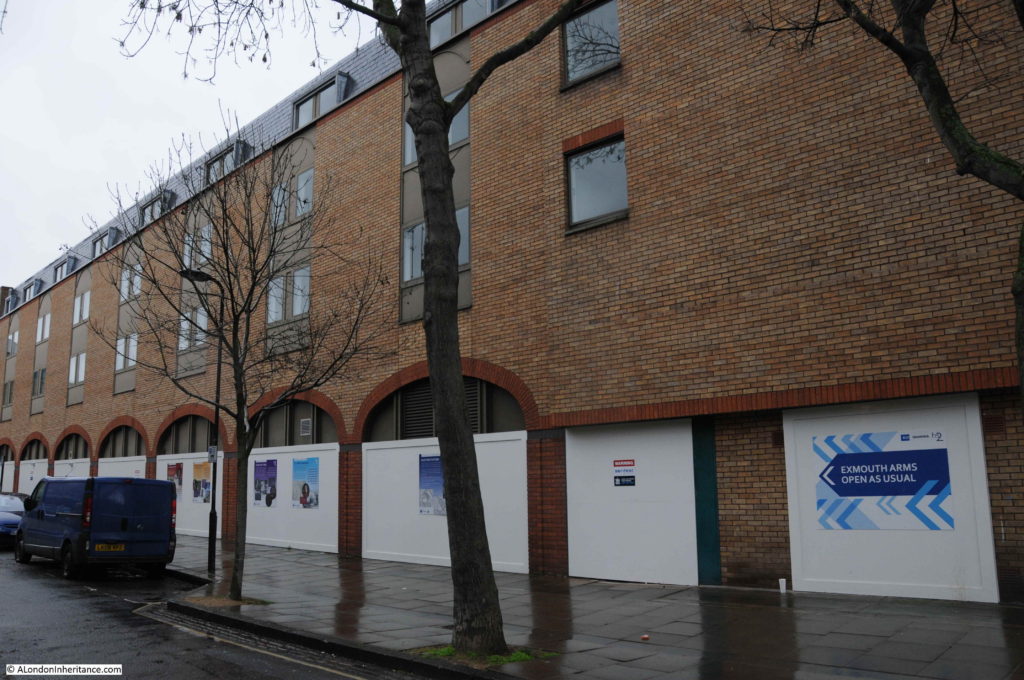 There are now a number of information posters along the old hotel. One example covering the history of Euston Station: 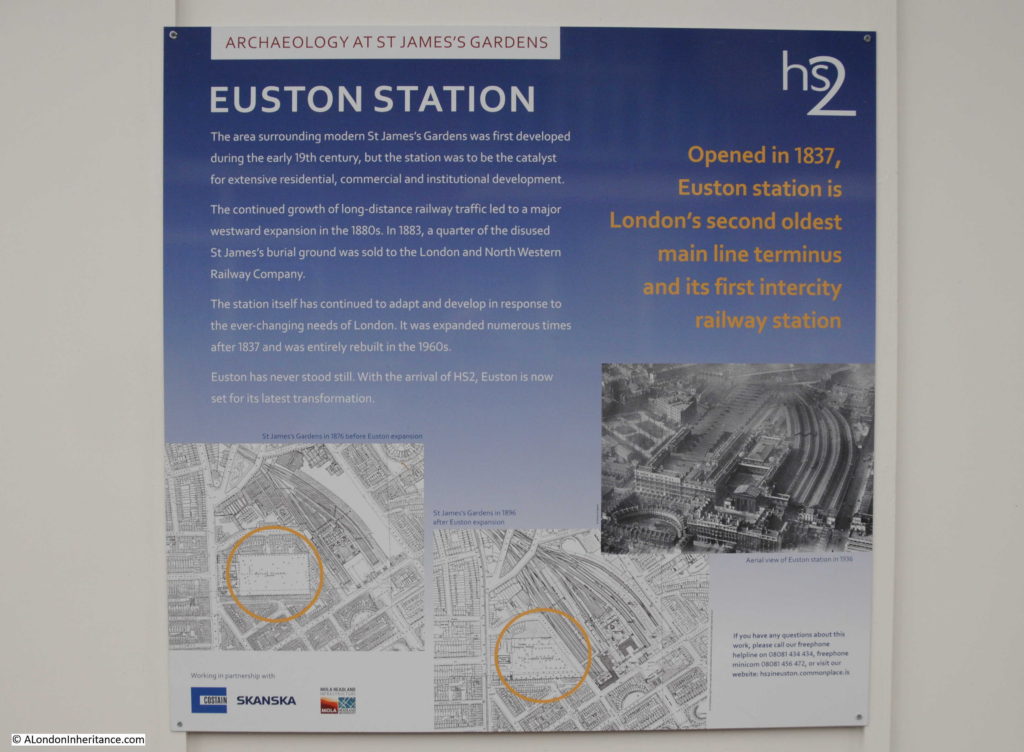 And another covering the St. James’s burial ground: 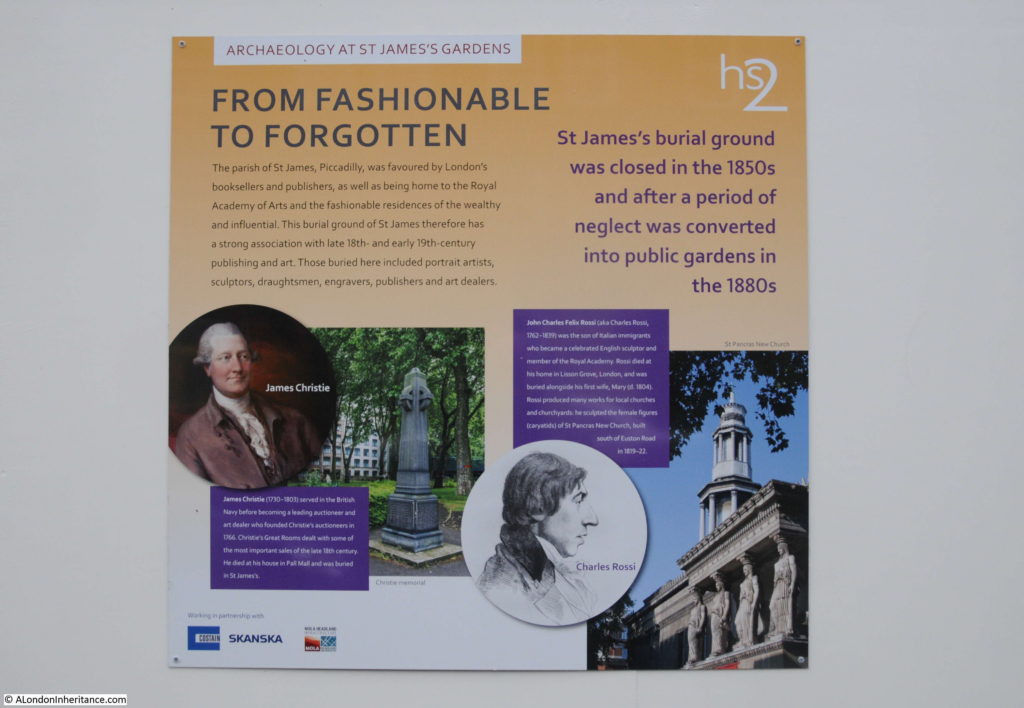 Looking down Cobourg Street towards the junction with Starcross Street. All these buildings will be demolished. 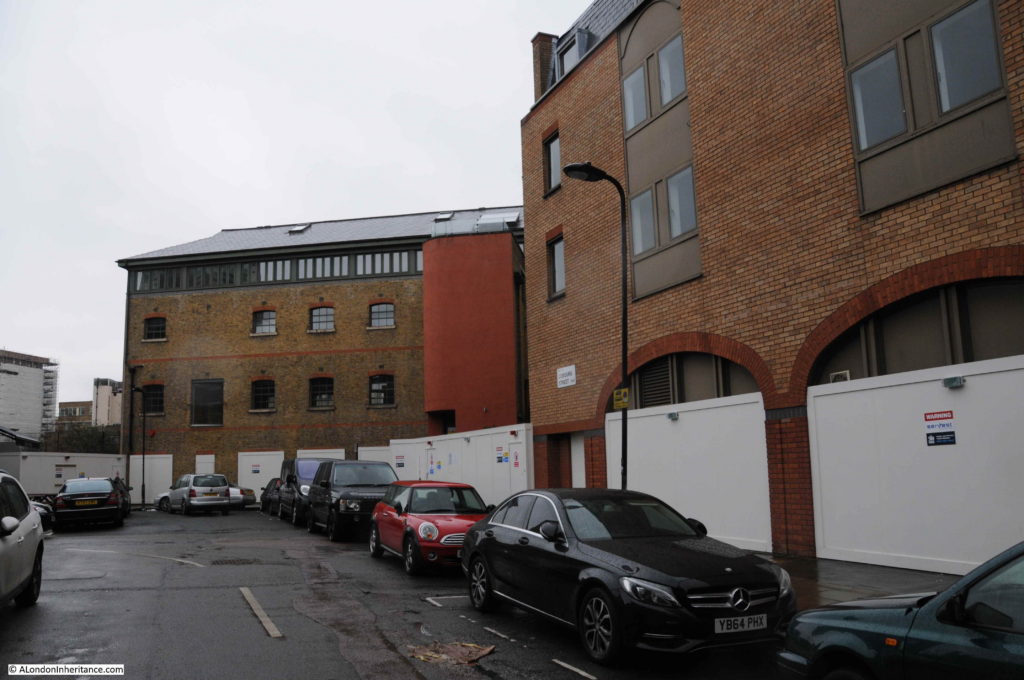 Back to the point where Cobourg Street crosses Euston Street, looking down towards Euston Station: 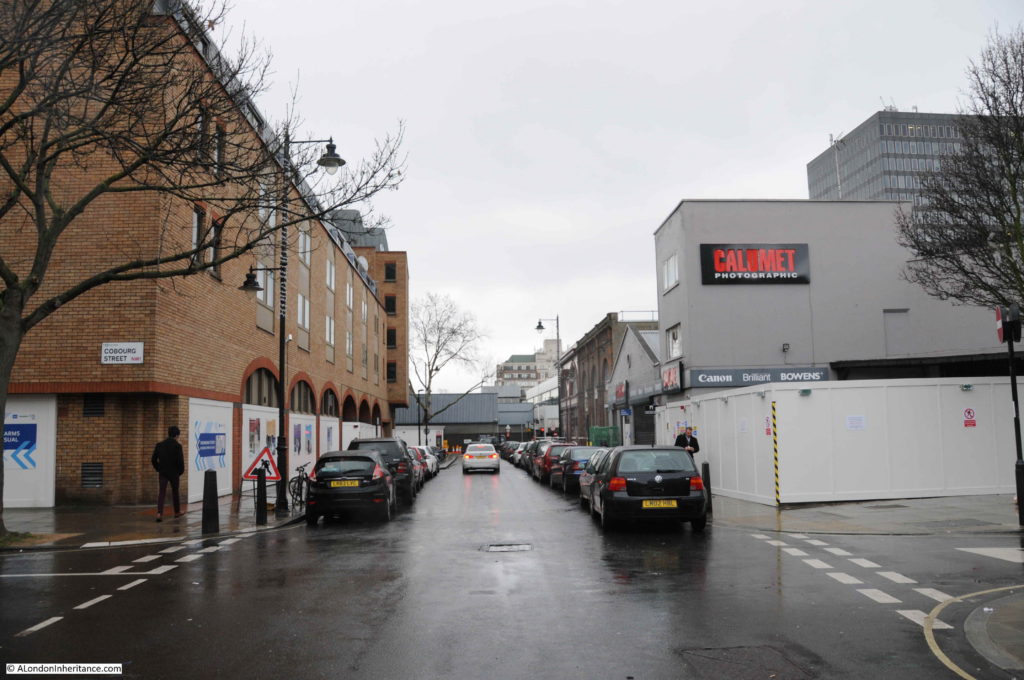 The old underground station at the junction of Euston Street and Melton Street: 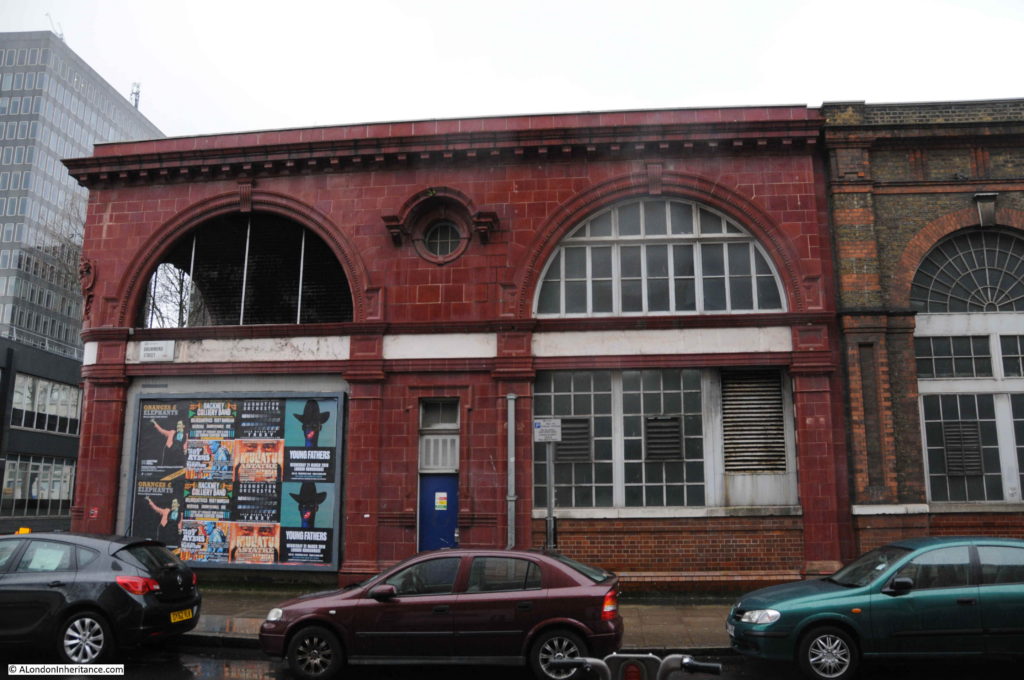 A wider view with rain drops on the camera lens: 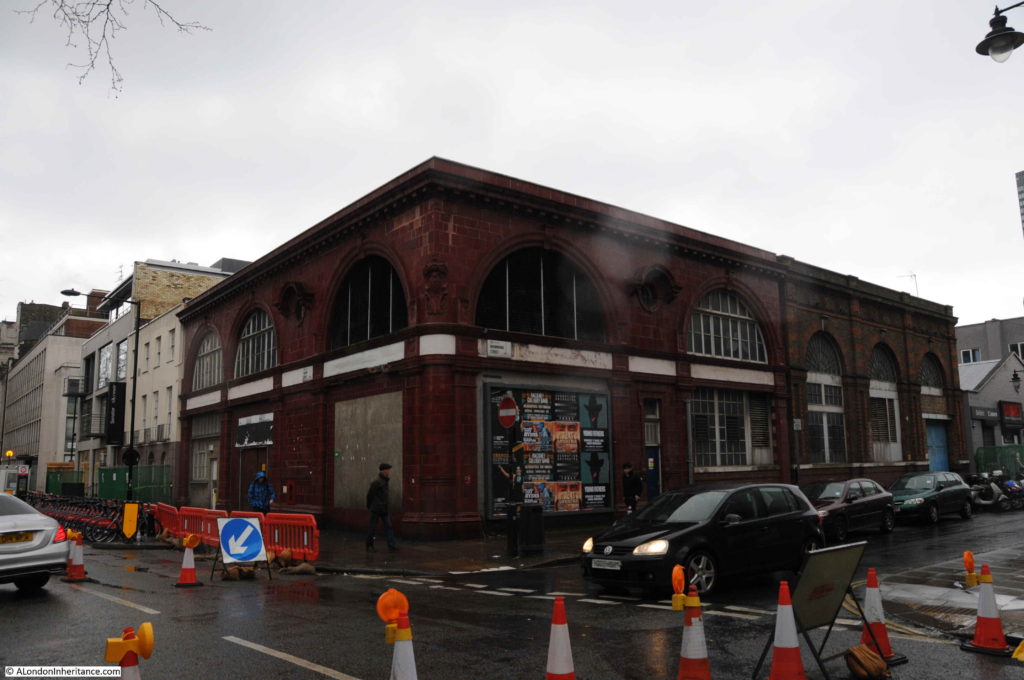 Walking back along Melton Street and some of the trees have colourful cloths wrapped around their trunks. This was the result of a “yarn bombing” where hand knitted scarves are wrapped around the trunks of trees to draw attention to their fate. 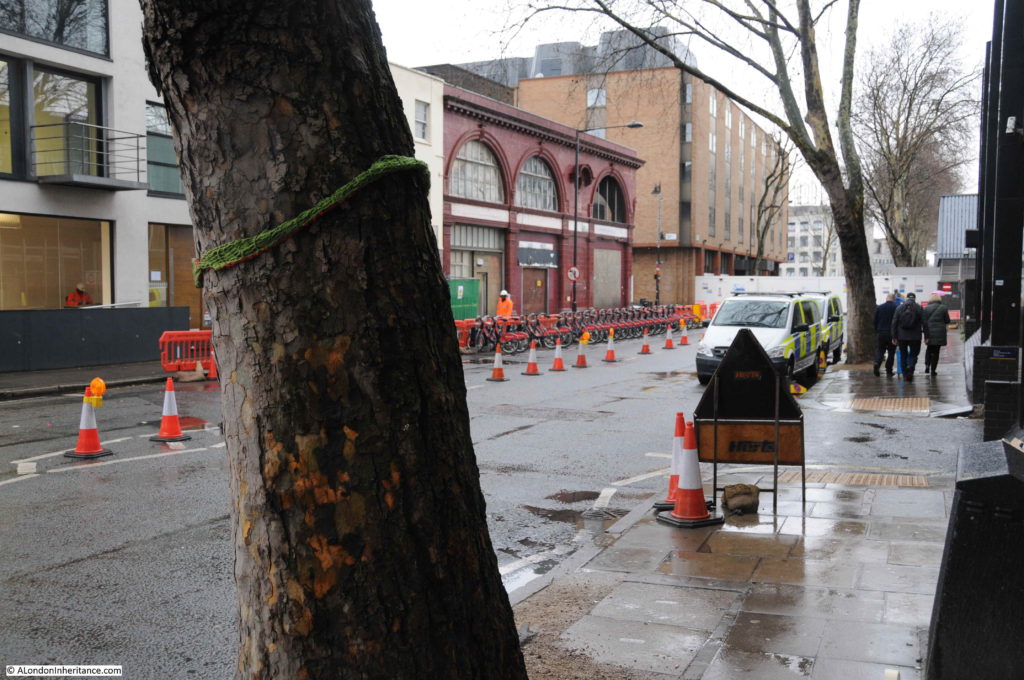 The opposite corner, on the junction of Euston Street and Melton Street, also with hoarding around the building. 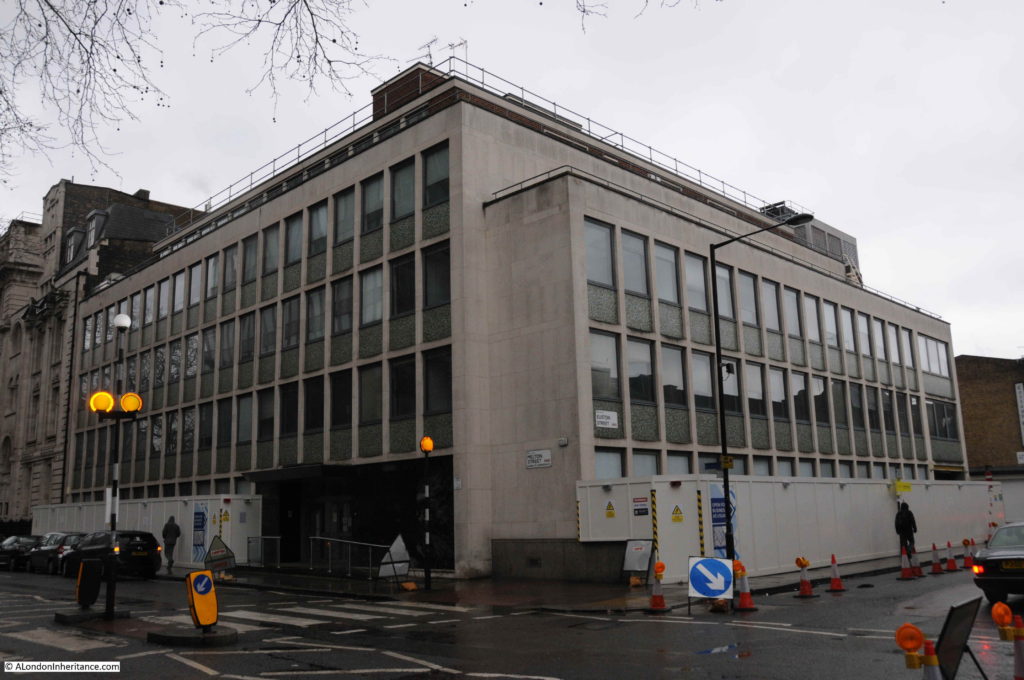 A partly visible sign carved into the stone around the entrance records that this was once the home of the Transport Salaried Staffs Association. 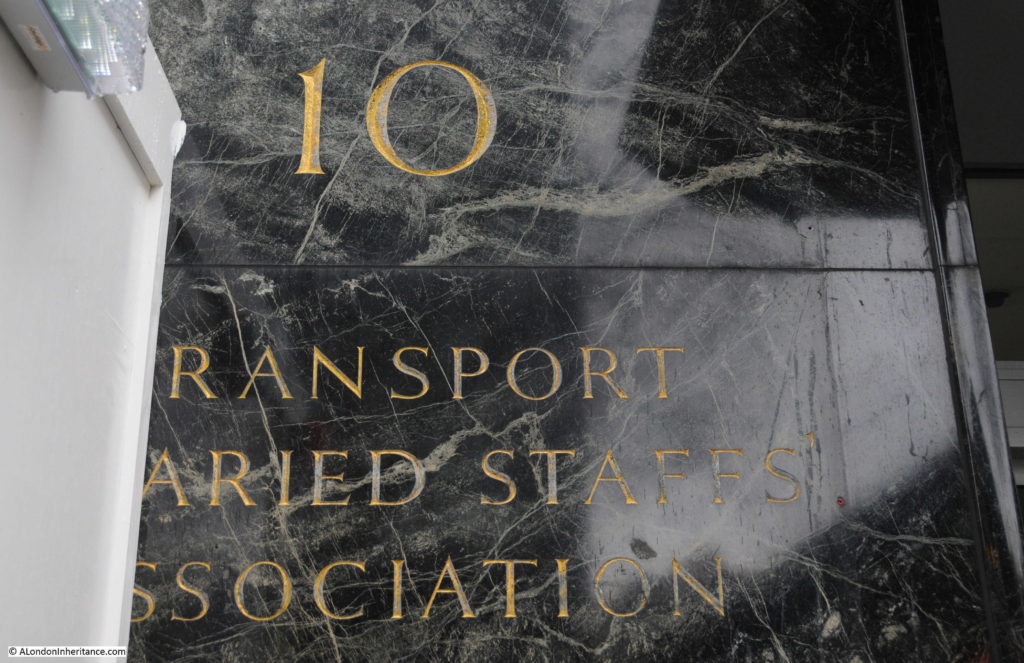 The impact of HS2 will not just be felt to the west of the station. major developments will take place all around the station and the gardens between the station and Euston Road are already being fenced off. 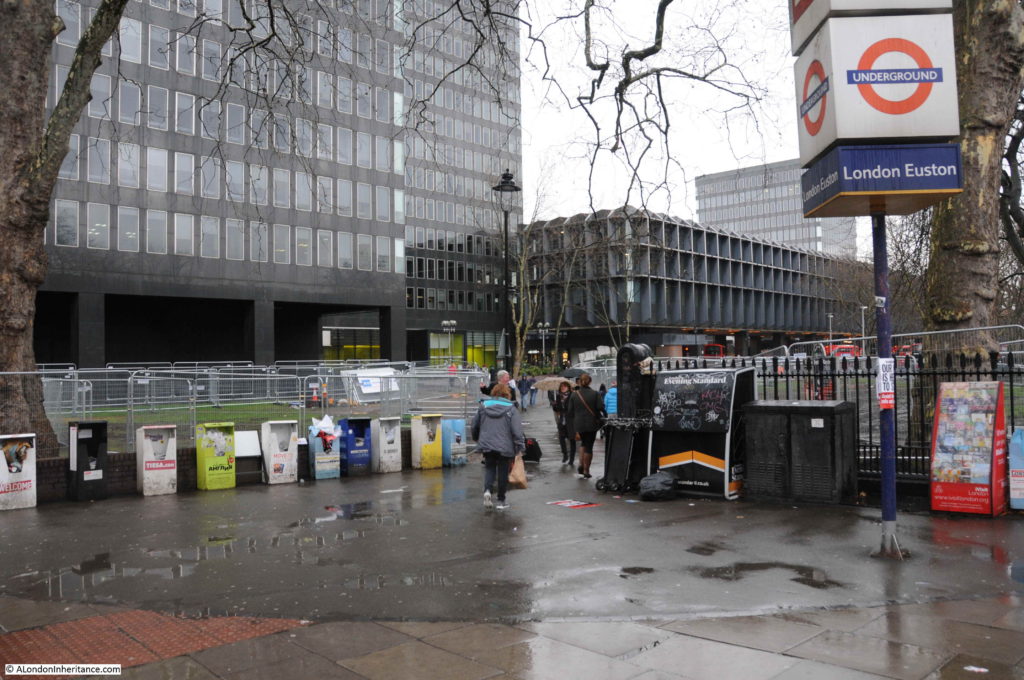 The weather added to the rather sombre mood that covers the area around Cobourg Street. The closure of Cardington Street seems to have added to the traffic in the area. Both sides of Euston Street and Drummond Street were occupied by parked cars, many of which appeared to be Ubers waiting for their next passenger. A single line of cars were trying to squeeze between.

I was pleased to finally get to photograph these streets and buildings before they disappear, however still more to visit when I get time and hopefully with better weather.

19 thoughts on “The Streets Under The HS2 Platforms And Concourse”