The joy of scanning negatives is finding different views of places that have been the subject of other photos. This week’s photo is of Cannon Street Station, photographed from the Thames foreshore at Bankside. 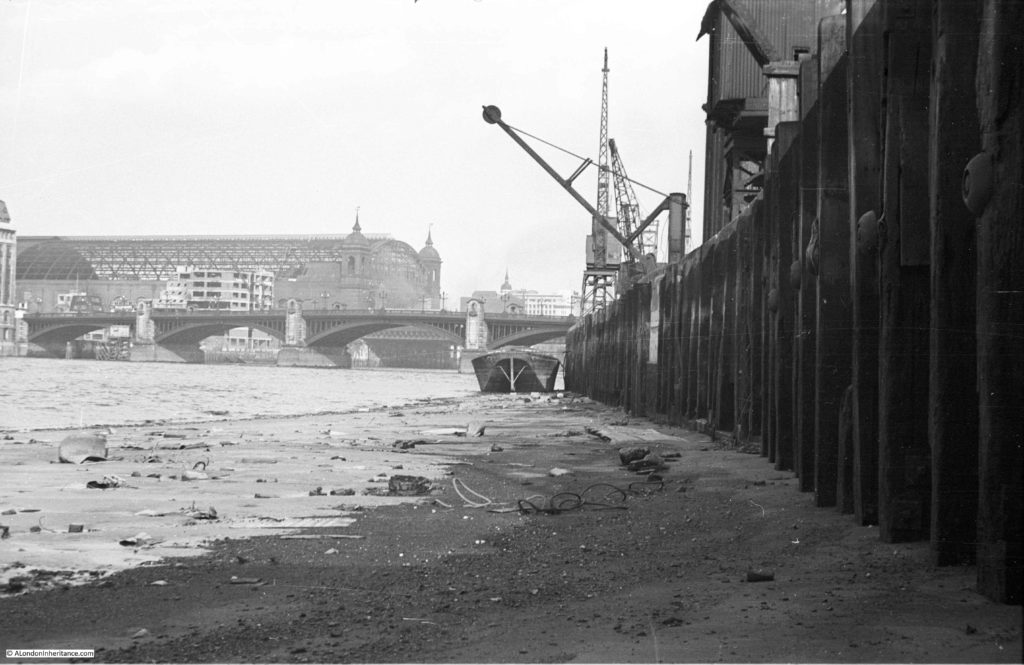 The same view today (although I had walked slightly further away from the river wall): 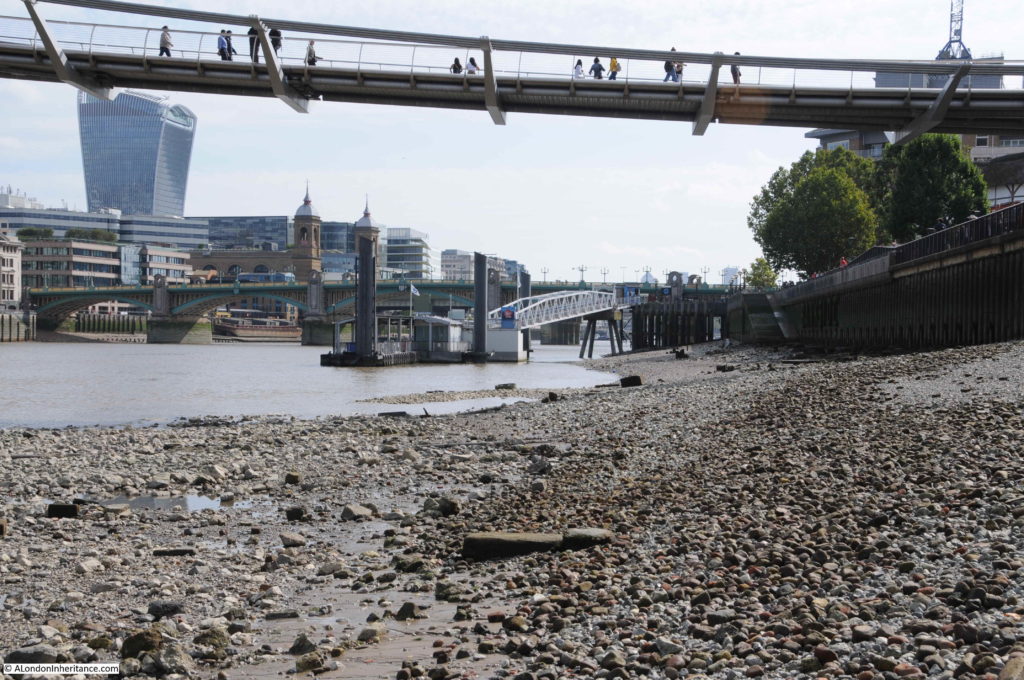 The view has changed considerably in the 70 plus years between the two photos. The only consistent features are obviously the river, Southwark Bridge and the twin towers at the entrance to Cannon Street Station.

The station has since lost the fantastic roof that stretched back from the entrance towers to the station hotel that once faced onto Cannon Street. The Walkie-Talkie, or 20 Fenchurch Street is the City tower visible from this perspective and the Millennium Bridge stretches over the foreshore, transferring walkers between south and north banks of the Thames.

I love being able to cross-reference photos so you can see both sides of the view. A few months ago I wrote about Emerson Stairs and published the following photo which is looking back from Southwark Bridge towards Bankside and includes the area where my father was standing to take the original photo. 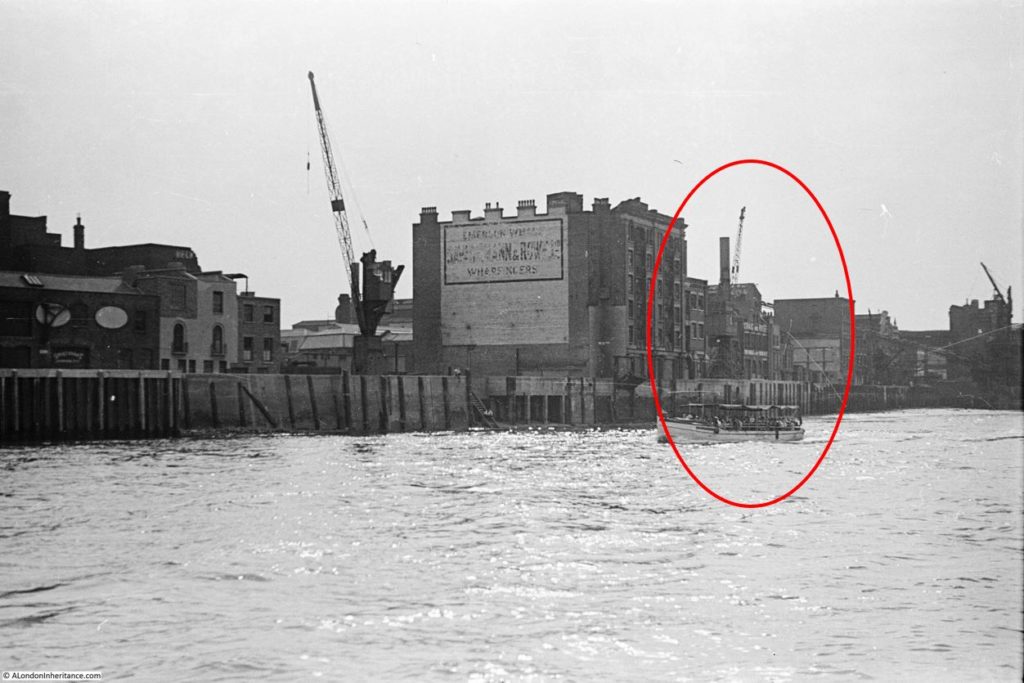 If you look at the photo at the top of the post, there is a Derrick Crane with the jib leaning out over the foreshore, and behind is one of the more traditional riverside cranes. In the photo above, taken from Southwark Bridge, I have ringed a small area. The following photo is an enlargement of this area. 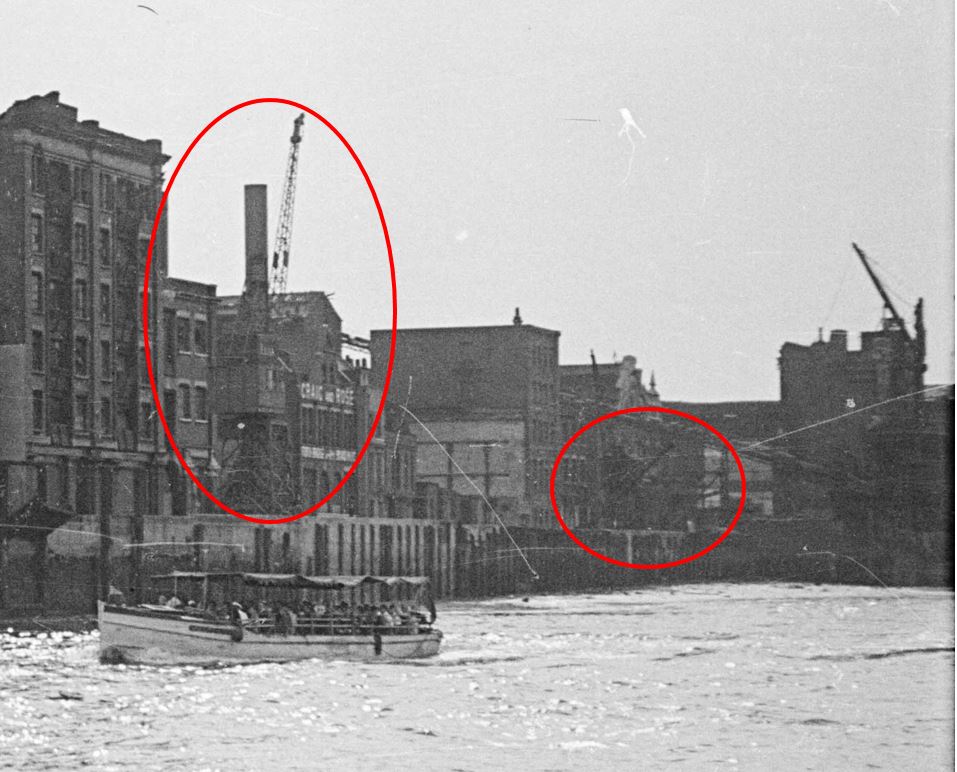 On the left is the crane in the background of the photo from the foreshore and to the right I have ringed the Derrick Crane. This is not easily visible due to the grain and contrast of the film, but can just be seen, so my father was standing just a short distance further to the right of the Derrick Crane, not far from where the conveyor belt taking coal from river barges to the original Bankside Power Station was located.

I have an almost complete set of photos of the south and north banks of the river between Westminster and Tower bridges in the late 1940s, and the plan for a future post is to bring these all together and document a trip along the river showing how both sides have changed in the intervening 70 years.

In the original photo, Cannon Street Station still has the arched metal framework which ran from the station entrance and hotel, all the way to the river entrance and the twin towers.

Cannon Street Station was opened in 1866 and the iron and glass arch was around 700 feet long and must have been a magnificent sight. The following postcard with a photo from the Monument gives an impression of what the arched roof must have looked like soon after completion, and how the new station dominated this area of the City. 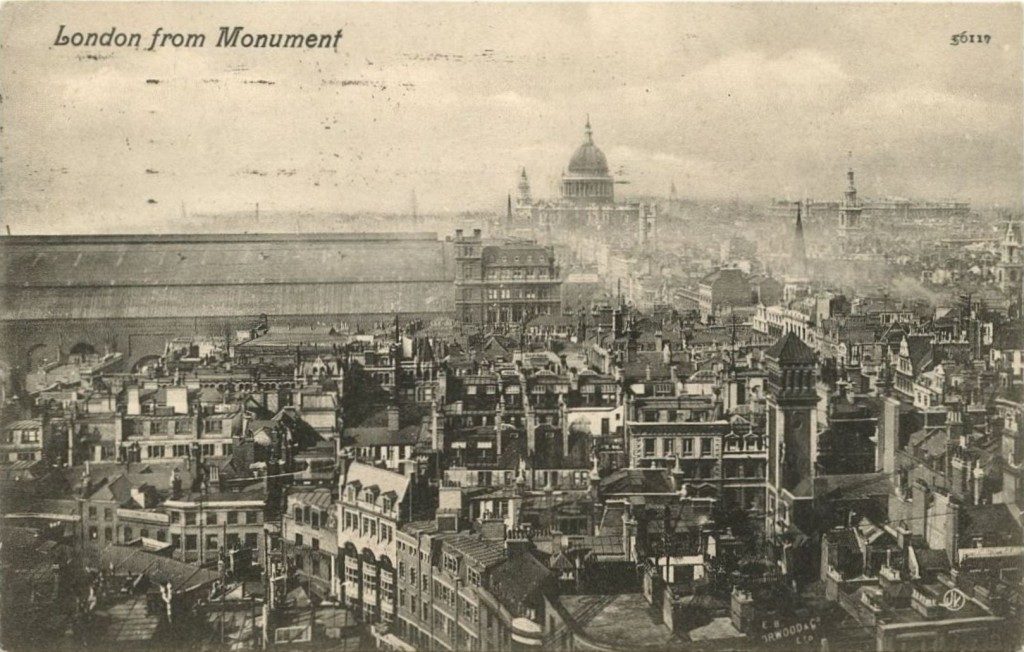 Maintenance of the station roof had been neglected prior to the last war, and the glass panels had been removed from the roof, leaving just the iron frame at the start of the war. Bomb damage included many incendiary bombs and a few explosive bombs, however as can be seen from my father’s photo, the majority of the iron frame of the arch survived.

The iron frame of the roof was removed in 1958, and the space above the platforms has been redeveloped with the office space that we see today.

The following photo is looking in the opposite direction, and shows the railway bridge running across the river for Blackfriars Station. 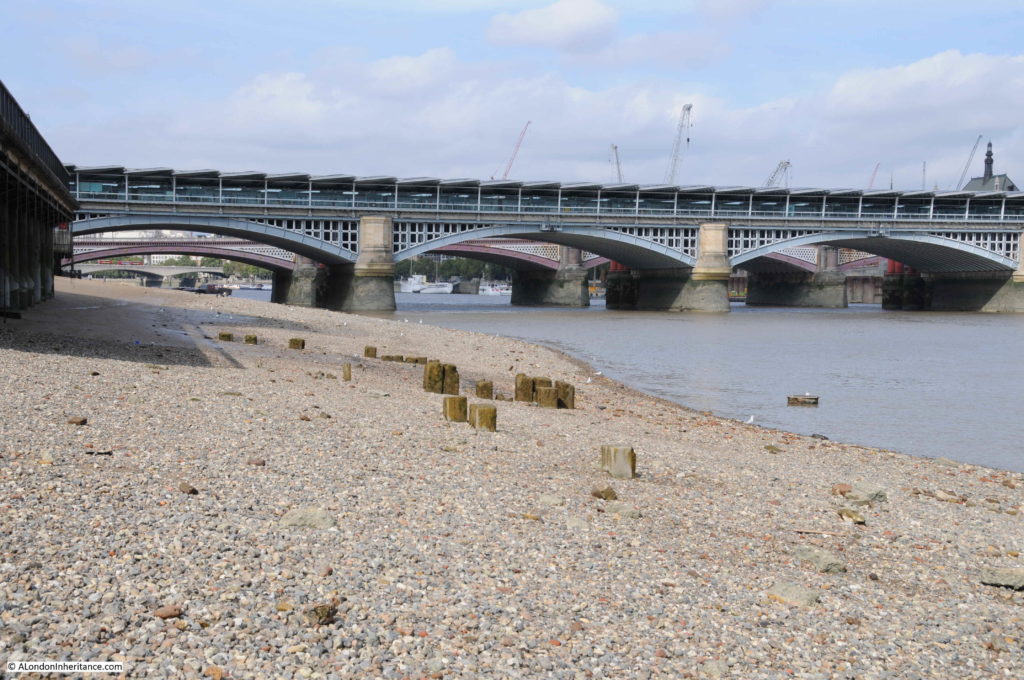 The Thames foreshore is a fascinating place, with plenty of relics of the industrial past of the river. Comparing my father’s photo with view today, it looks as if there is now a more pronounced slope of the foreshore. It looked reasonably flat in the original photo, but as can be seen in my photos from the same place, the foreshore looks to slope down into the river. Possibly more erosion is taking place with increased water flow?

The foreshore is littered with traces of the past. Exposed pipes that run from the land down into the river. What was their original use, or are they still in use? 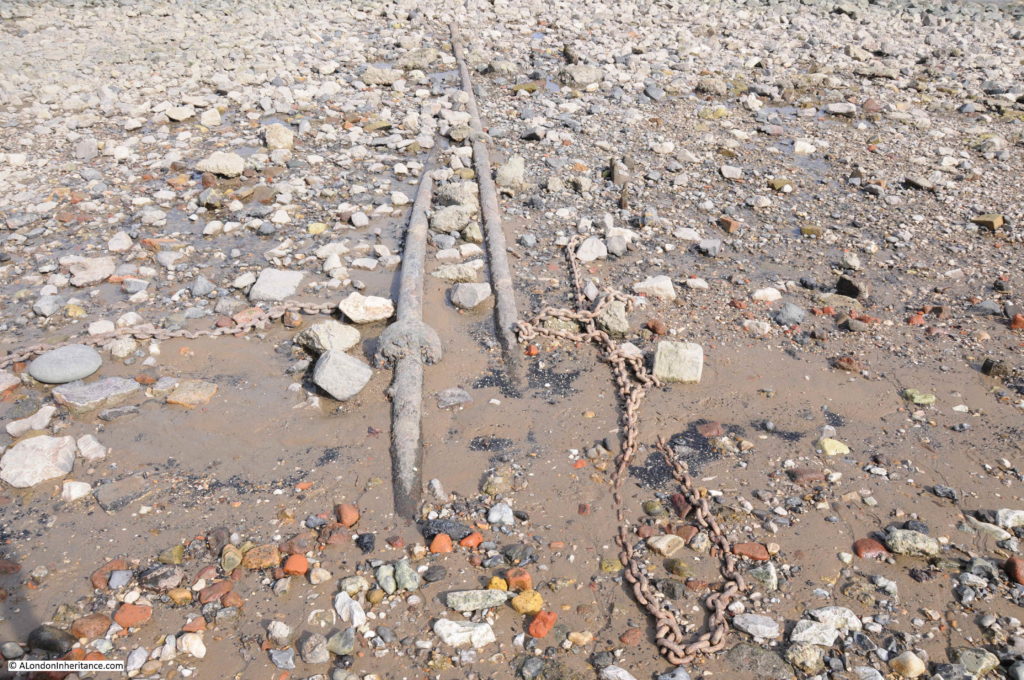 Chains, the red / orange of tide worn bricks and lumps of chalk that were once used to create level platforms to position barges, all provide evidence of an earlier city.

The main change to the river in the area of my father’s photo has been the construction of the Millennium Bridge, which is just as interesting from below the bridge as from above. 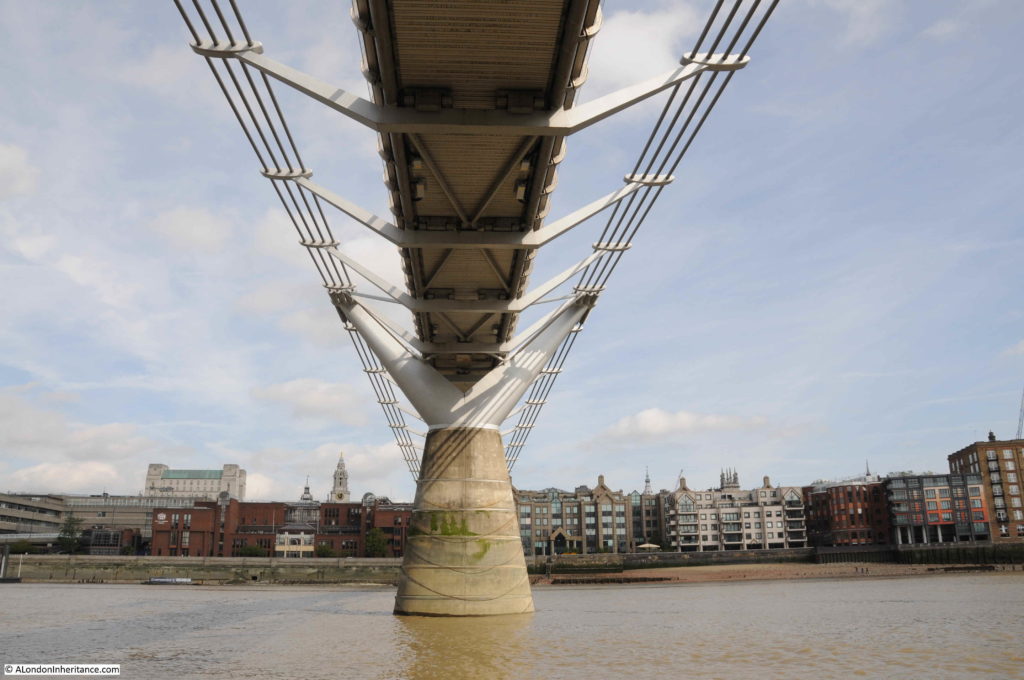 The day I was on the Thames foreshore to take an updated photo was a day of an exceptionally low tide. This is when the river reveals many more features including those that demonstrate that the foreshore is not a flat slope down to the centre of the river. Here a raised bank runs out further into the river. 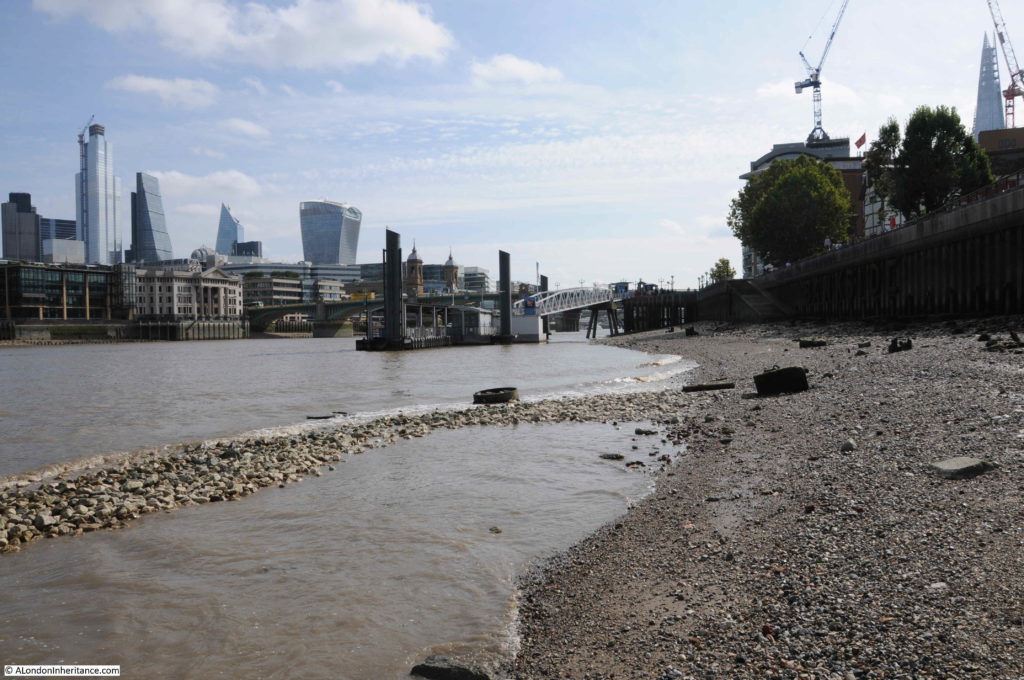 Almost certainly not a natural feature, but possibly enhanced by the river eroding softer sediment on either side.

Alongside the raised bank, the remains of iron piers run out into the river. The remains of a structure from the days when Bankside was industrialised and dependent on the river. 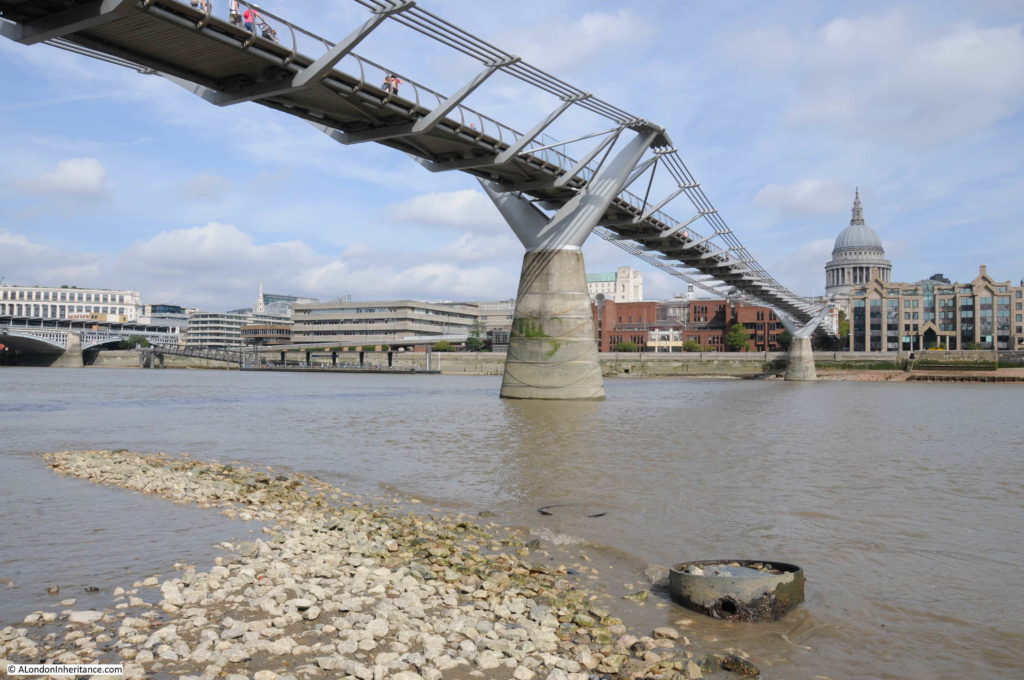 When the water is this low, it is intriguing to imagine what the view would look like if all the water was drained away. The detritus of a couple of thousand years of London’s history revealed.

During the reconstruction of the area and the new walkway along Bankside, the river wall was replaced by metal piles, however they do not provide an impervious barrier between land and river and there are still plenty of points where water drains into the river, as well as strange pipes which serve no obvious purpose. 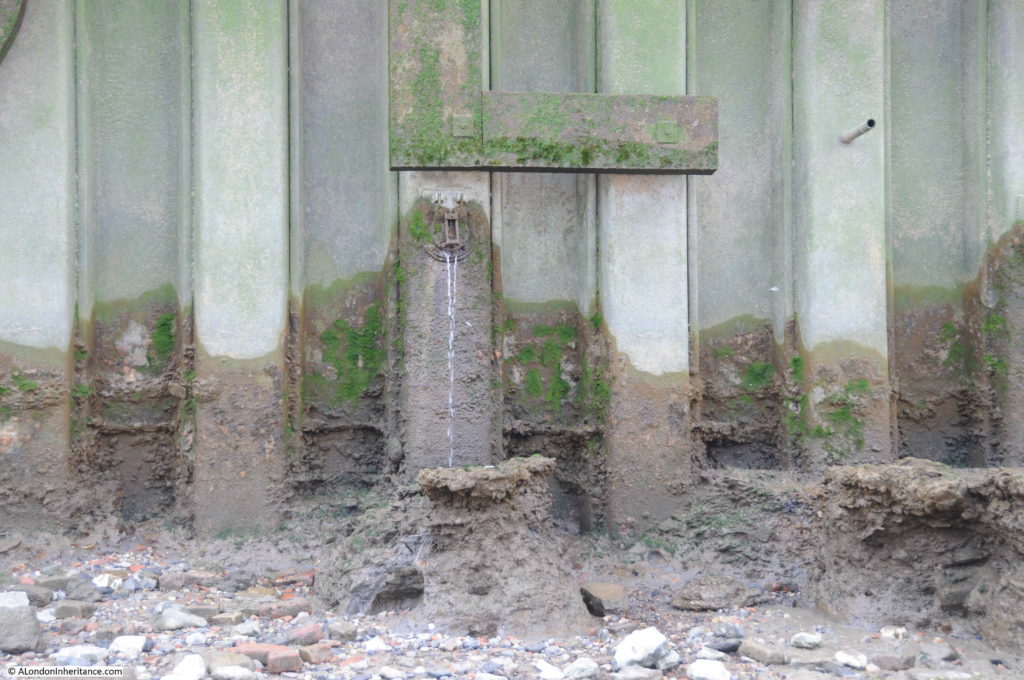 For centuries, the river has collected everything that has been lost by those working or travelling alongside, or on the river. Buried under the silt and often returned to the surface following erosion by water flow and the tides. You will not find clay pipes being dropped into the river these days, rather the evidence of 21st century construction work on, or alongside the river. 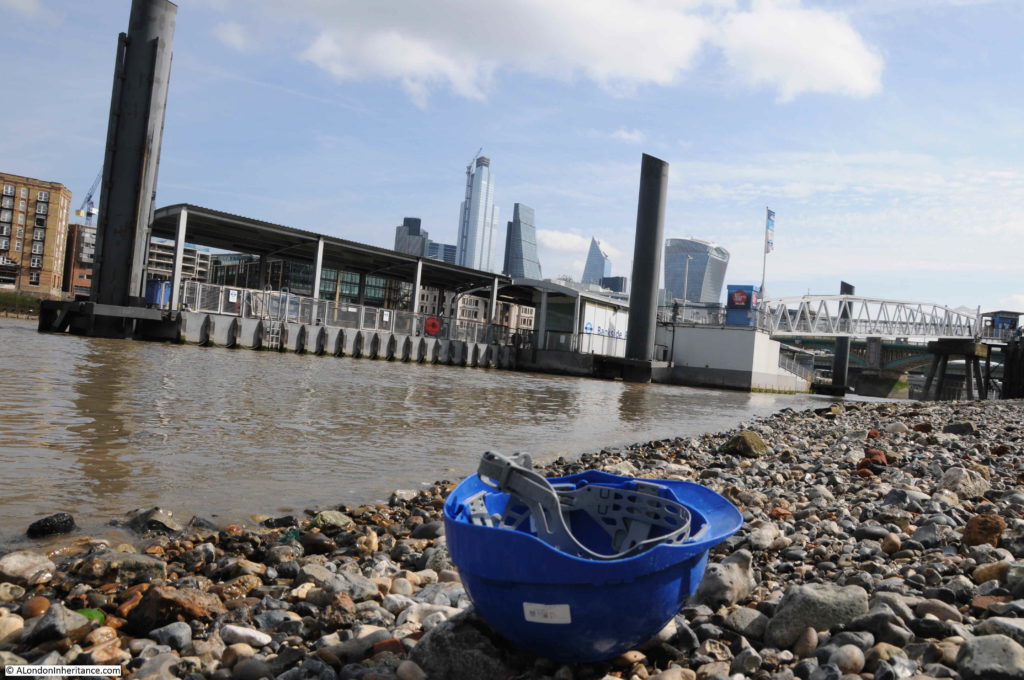 Low tide is a fascinating time to walk along the Thames foreshore, walking on a couple of thousand years of London’s history. Cannon Street Station has only been there for a very short period in that history, the wonderful arched roof has been lost, but the twin towers will continue to welcome trains into the station for years to come.

13 thoughts on “Cannon Street Station from the Thames Foreshore”