Trinity Hospital Greenwich can be found facing the River Thames, roughly half way between two pubs, the Trafalgar Tavern and the Cutty Sark. In 1951 my father took the following photo of the river facing entrance and clock tower of the hospital, with the chimneys of the adjacent power station behind. 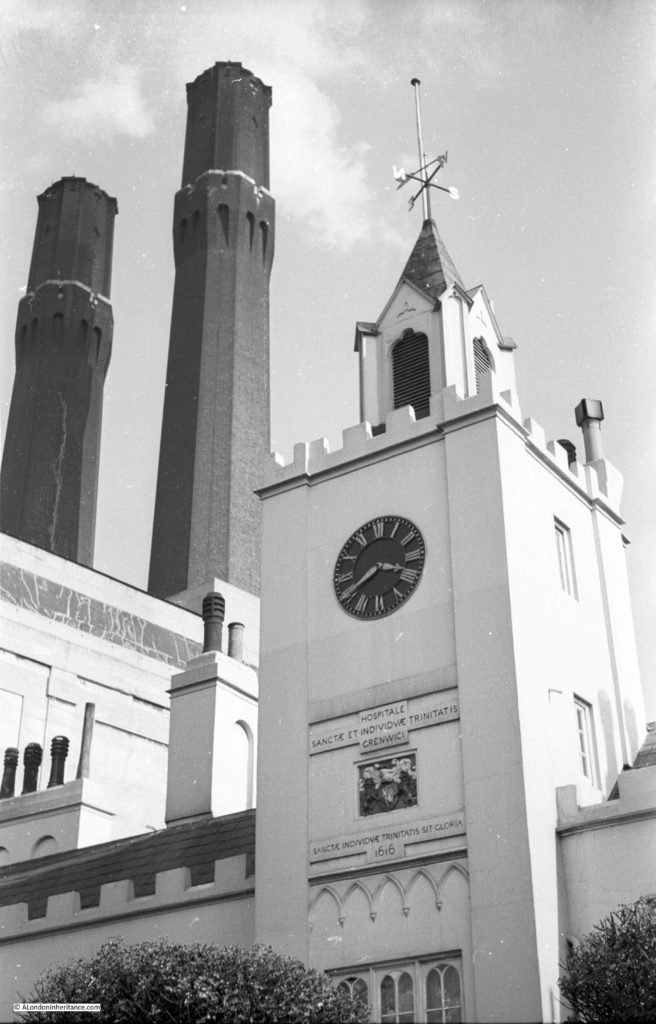 I suspect his thinking in composing the above photo was to show the contrast between what was at the time the almost 350 year old hospital and the relatively recent power station that then dominated the area. The photo also shows two buildings with very different form and function. One enormous building generating electricity from coal for the tram network of London, the other much smaller building providing accommodation for the poor of Greenwich.

On a fine day last Autumn, i was on my way to the Cutty Sark pub, remembered that my father had taken a photo of the hospital and power station chimneys, but did not have a copy of the original photo with me, so took a couple of comparison photos in landscape rather than portrait, but hopefully they show what has changed, and what has not in the past 70 years.

The entrance gates, entrance and clock tower, with the power station in the background. 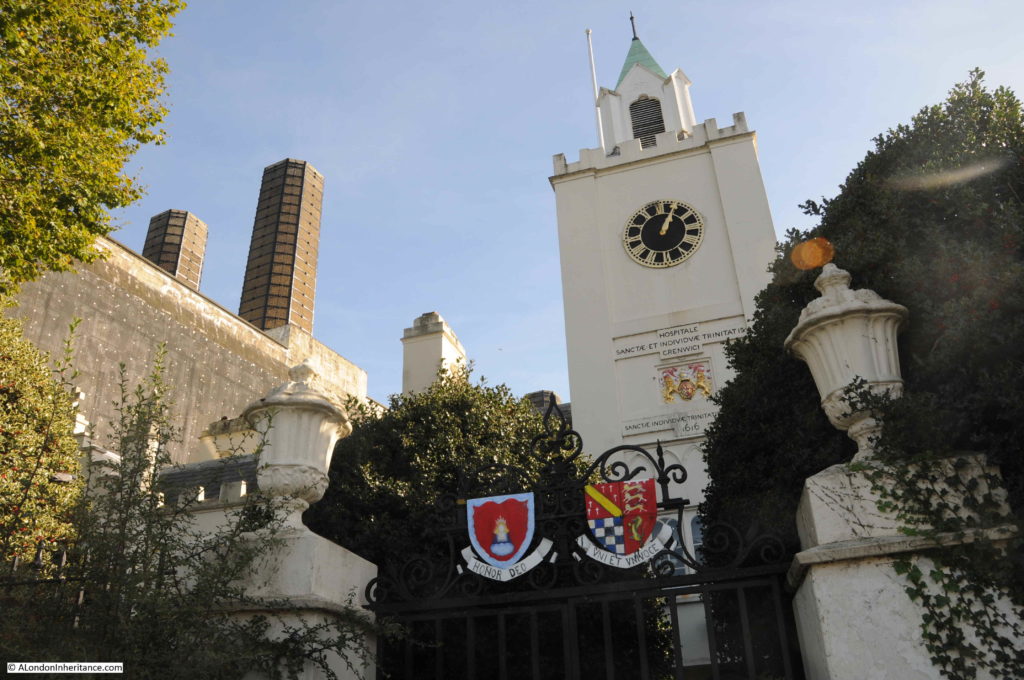 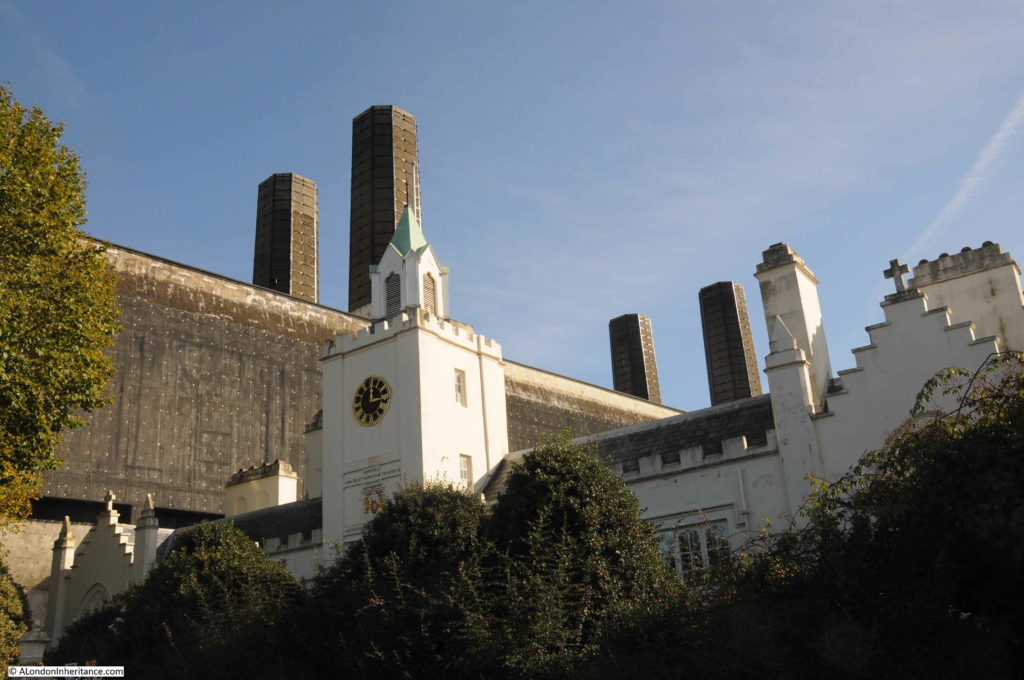 The main difference between the two photos is the build of the chimneys. The power station has four chimneys. The two chimneys in my fathers photo, and to the left in the above photo date from the first stage of the power station which was opened in 1906. The two chimneys of the second stage, shown to the right of the above photo were originally constructed to the same design, but were soon shortened due to complaints by the Royal Greenwich Observatory.

“THE HEAVENLY TWINS – GREENWICH ELECTRIC POWER STATION: Very much the reverse of beautiful though they are, the two great chimneys which stand side by side, gaunt and forbidding, near the Thames at Greenwich, represent power, importance, and engineering skill. They are the outward and visible sign of the inward wonders of the London County Council’s new power station. One of the largest in the world it will be when completed.

‘The Heavenly Twins’ Greenwich people have christened the towers, but it is the interior which is to supply the vitality and volatility which will be the better reminder of Angelica and Diavolo.

Along the side wall of the vast chamber, where the plant is to be stored, runs a series of vertical girders, writes a correspondent who has paid the generating station a visit. On these a travelling iron bridge moves from end to end carrying a crane which lifts any weight up to 50 tons. Heavy objects are taken up at the front door and gingerly carried to any part of the hall. Below us the furnaces, consuming 600 tons a day, occupy the great basement. The dynamos are on the ground floor, in the side gallery a giant switchboard will strike the visitor with awe and fear at its death dealing potentialities.

It will come as a surprise to many homely people to find that here the ‘coal cellars’ are on top of the house. These bunkers comprise 24 square iron chambers, holding in all 16,000 tons of coal. The bottom of each is shaped, in cement and metal, like an inverted cone, the depressed point being an open funnel or shoot, down which the coal falls directly into the furnace openings as the stoker directs.” 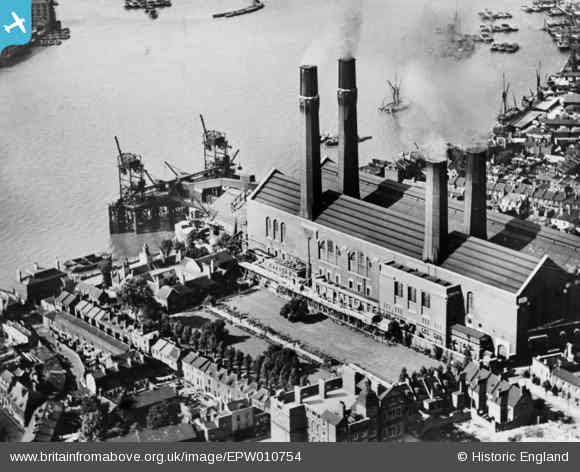 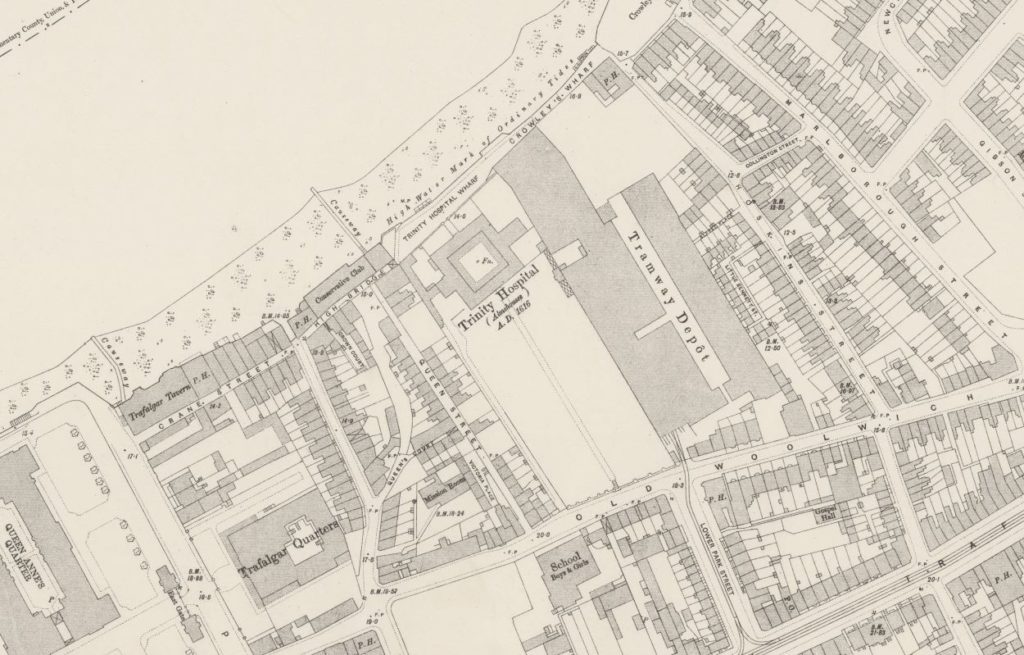 Power stations in the first decades of the 20th century operated independently, with no backup and breakdowns would have an immediate impact to users of electricity, and this was very visible on the London transport system.

A letter to the East London Observer on the 17th October 1908 by the president of the Associated Municipal Electrical Engineers raised two recent failures of the Greenwich Power Station, and the power station at Lotts Road, Chelsea which supplied the London Underground:

“The Greenwich Power Station of the London County Council and the Chelsea Power Station of the Underground Railways, both these stations have recently broken down, with the result that in the former case about 600 to 800 trams were brought to a standstill, and in the latter case all trains and lifts on the Bakerloo, Piccadilly and Hampstead Tube Railways and the District Railways were stopped and the stations and lifts plunged into utter darkness, as well as causing a stoppage on the Wimbledon and Surbiton sections of the London United Tramways systems.”

The author then goes on to propose that these sort of power outages can only be fixed if electricity generating stations are interconnected so there is no single point of failure, and other stations are available to take on the load of a failed power station. An idea that would eventually be implemented across the country in the form of the National Grid, which today provides electricity to the Underground network, with the Greenwich Power Station being available as a back-up generator having been converted to gas operation.

Trinity Hospital is also shown on the 1895 map, and by the time of the map, it was already almost 300 years old. The book “The Endowed Charities of the City of London” (published in 1829) describes the founding of the hospital as:

“By letters patent, King James I, dated 5th June, in the 13th year of his reign (1615) reciting that Henry, late Earl of Northampton, did, in his lifetime, begin to erect a certain edifice at East Greenwich, for the habitation and support of poor men”

Accommodation was provided for 20 poor men, who would live in the hospital along with a Warden. Residents were expected to comply with a set of standards which included not being allowed to go to Taverns or Ale-houses.

A 19th century report of a dinner provides a glimpse of life at Trinity Hospital and for the increased number of residents (now 25). From the 11th September 1841;

“Trinity Hospital, Greenwich – A most gratifying scene was presented at this hospital on Wednesday last, on the occasion of a dinner being given to the inmates, nurses &c, by the Rev. William Jurin Totton, rector of Debden, Essex, and old member of the Mercer’s Company, who are the governors and trustees of the charity. It was pleasing to those who saw the old members, 25 in number, and whose ages amounted to 1680 years, assembled in the sub-hall at a dinner of true old English fare of roast beef, plum-pudding, and other substantial refreshments. The dinner was served soon after noon according to primitive custom; and, afterwards various appropriate toasts were given by Mr Tatham, the warden. ‘God save the Queen’ being sung after that of the ‘ Queen and Royal Family’, by as many of the old men as were able, aided by the young men of Greenwich, whose musical services were kindly volunteered for the occasion.

The crowning point of the evening was the presentation by the liberal donor of the feast, of twenty-five valuable books, consisting of sermons and works of edification and amusement, thus forming the foundation of a library for the use of the poor men in their leisure hours. The Earl of Northampton’s banner was hoisted on the turret of the building, in honour of this innocent festivity, and at night-fall each inmate retired to his chamber with his heart filled with gratitude towards the Rev. Mr Totton, whose health was drank in the ancient silver loving-cup, with three times three.”

The report states that there were 25 residents with a combined age of 1680 years, therefore the average age of the residents was just over 67 years.

So Trinity Hospital has retained its relationship with the Mercer’s and providing accommodation for local Greenwich residents for almost 400 years.

The London Metropolitan Collage Archive has a photo of Trinity Hospital looking in the opposite direction to the power station, dated 1937: 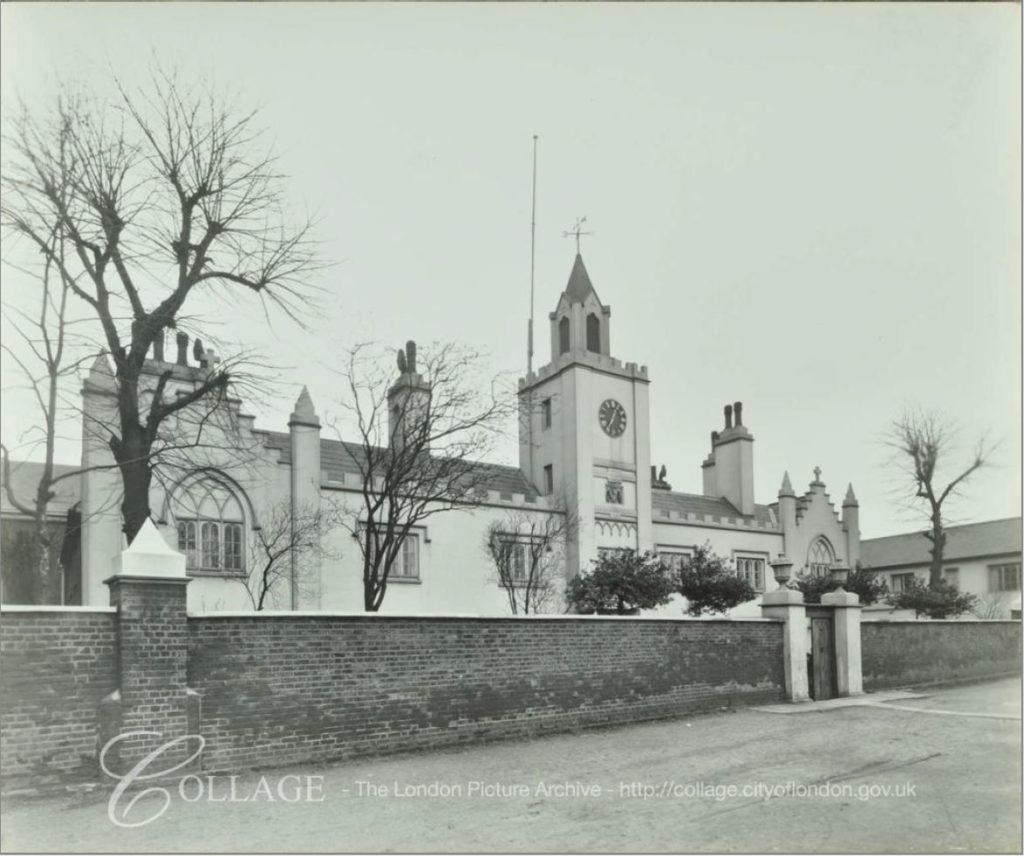 Interestingly, Collage also has a photo very similar to my father’s photo. Taken in 1960 it was obviously a favorite photographic subject, showing the contrast between two very different chimneys. 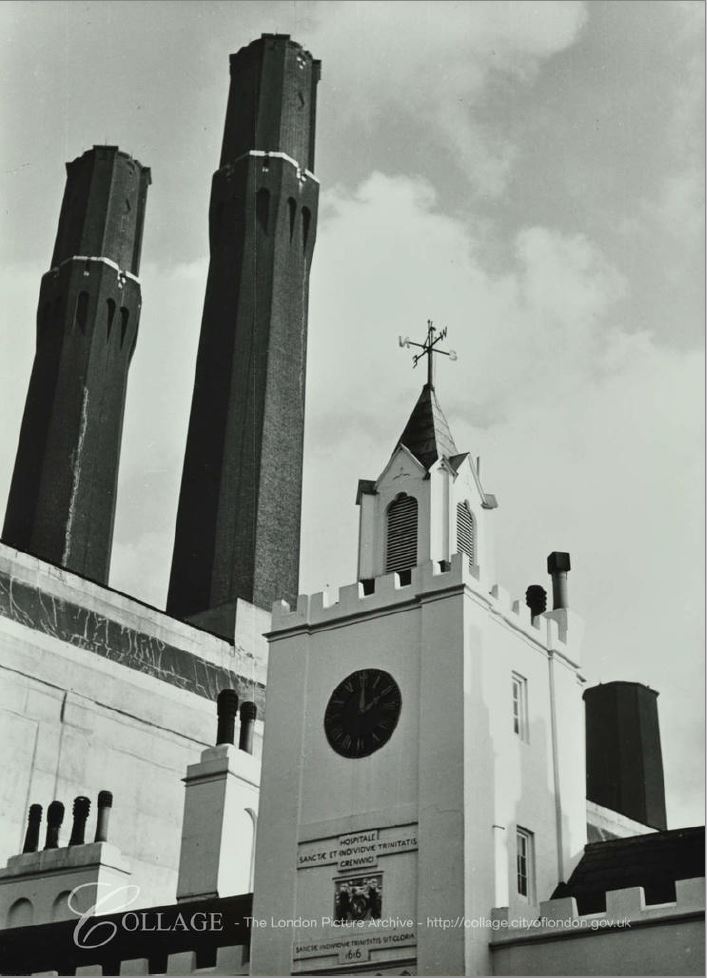 Trinity Hospital is sometimes open during the Open House London weekend and it has been on my list of places to visit, but not yet had the time. Hopefully this year.

As usual, there is so much to find in the immediate local area. Directly opposite Trinity Hospital is the river wall, heightened over the years to prevent flooding. With plaques on the wall detailing the heights and dates of previous high tides. 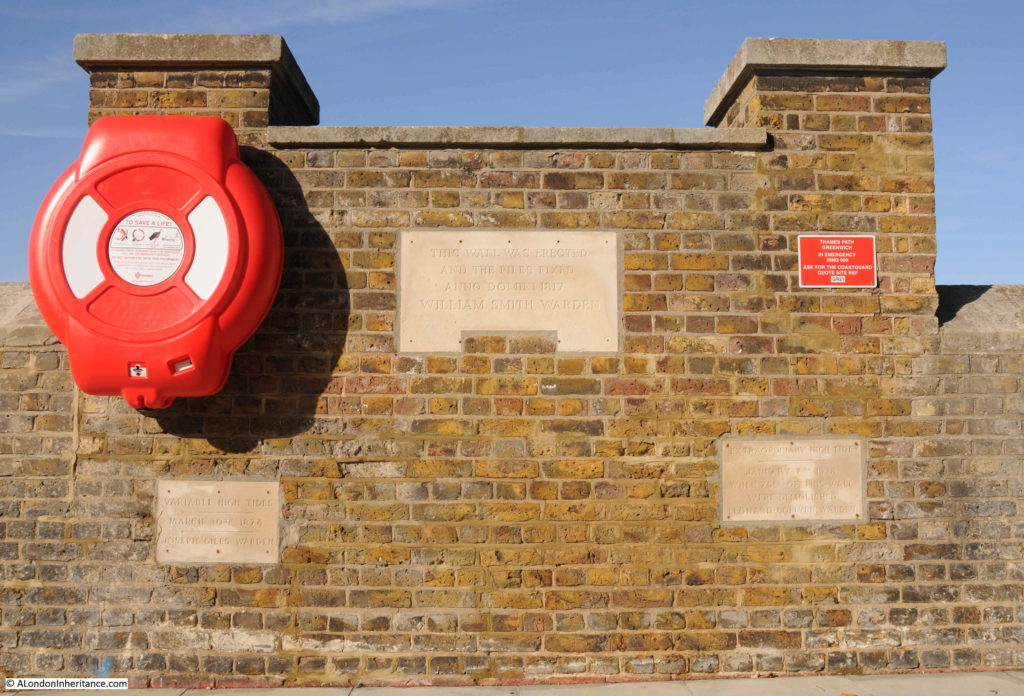 The plaque on the right records an extraordinary high tide on the 7th January 1928 when 75 feet of the wall were demolished, this must have flooded the hospital.

The river is always making its presence felt along the river walkway. A tell-tale flow of water from underneath this metal gate: 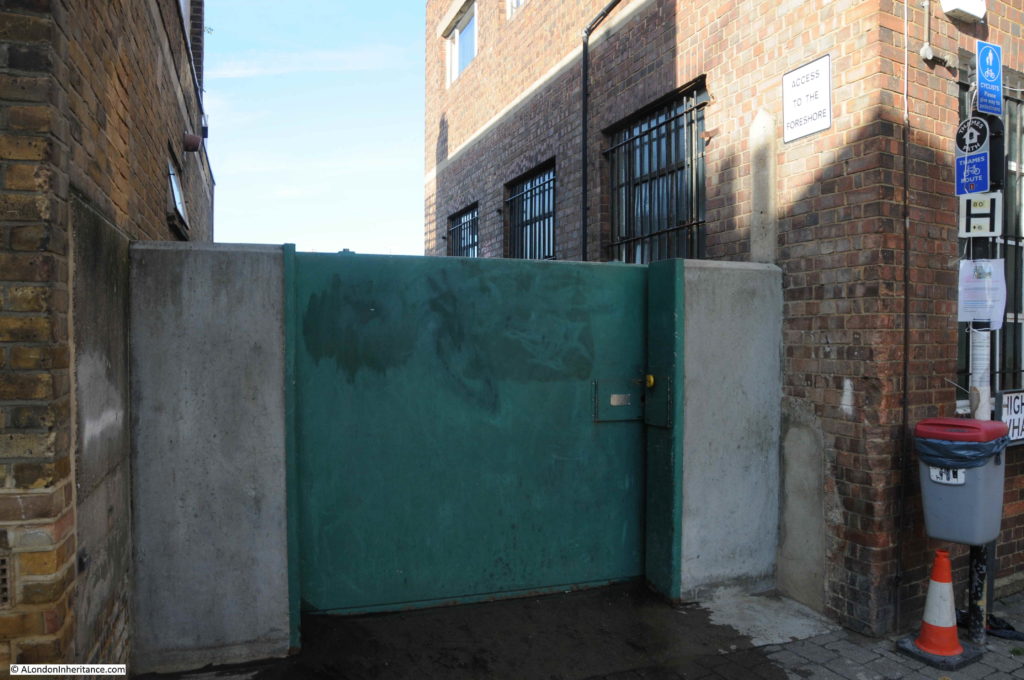 Sticking my camera over the top of the gate reveals a narrow gap between two buildings, with the river surging in. 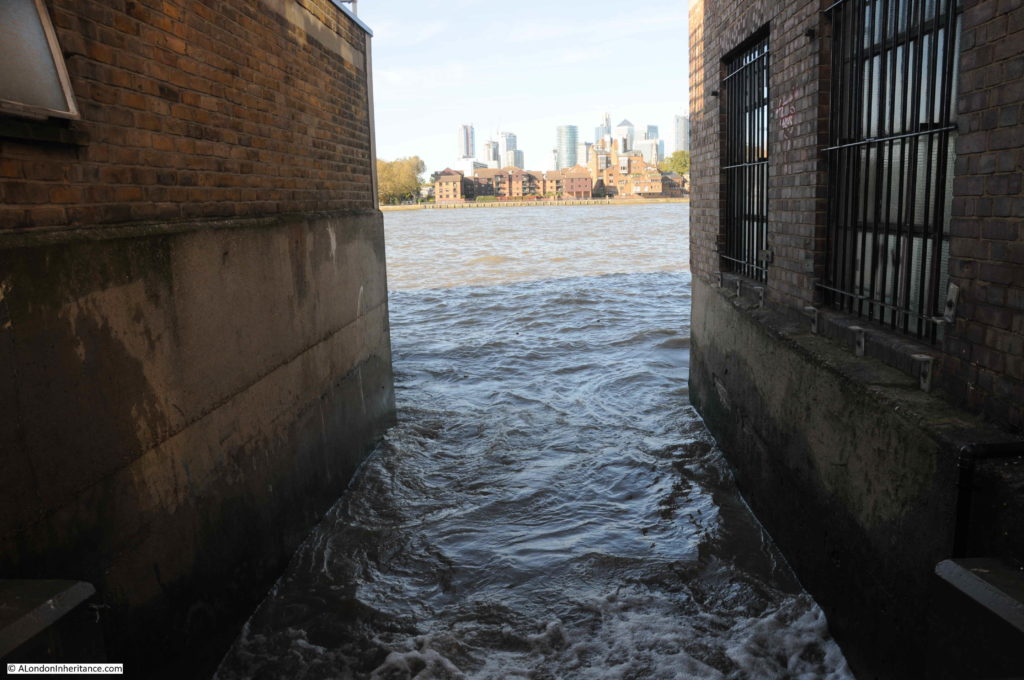 Passing above the riverside walkway and extending out into the river is the old power station coal jetty. 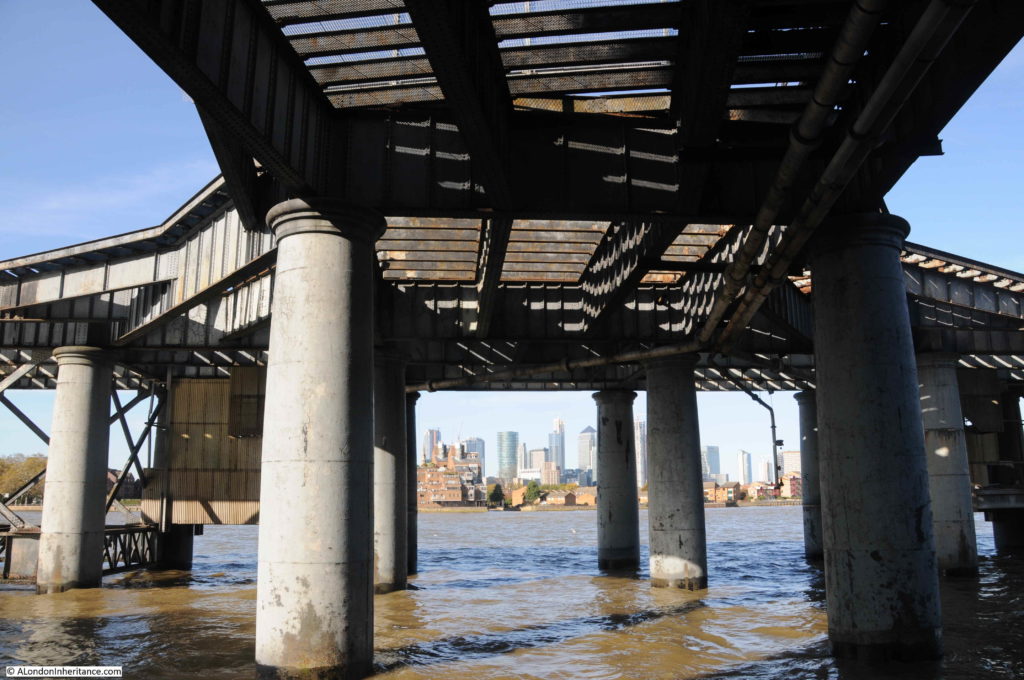 Along the riverside walkway, the power station is surrounded by a high brick wall, I suspect not just to keep people out, but also to keep water out in the event of a high tide. 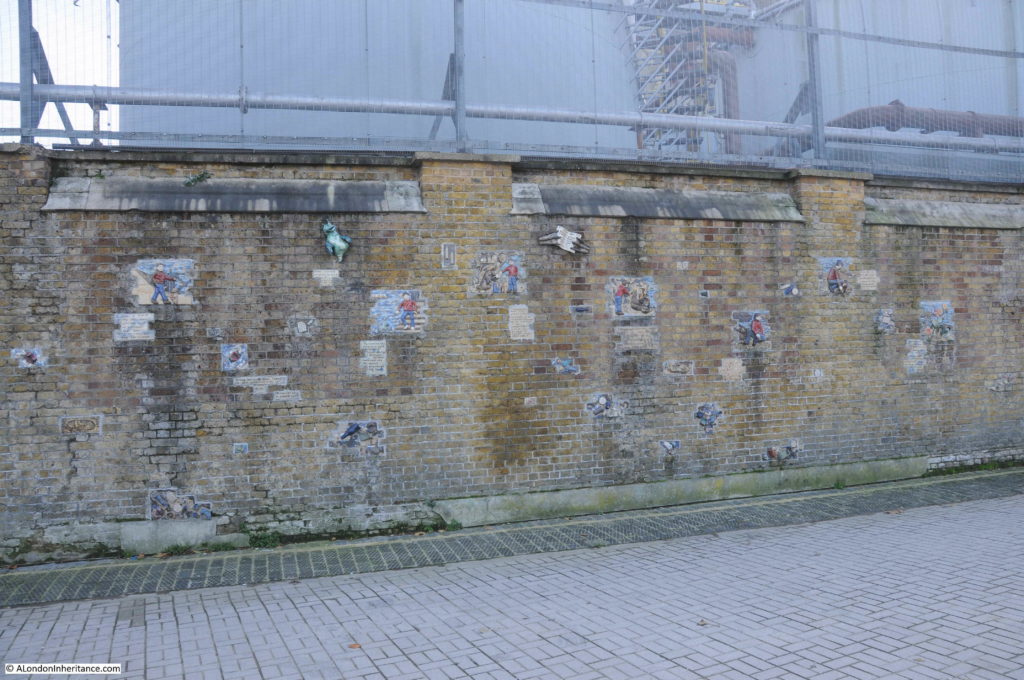 The wall is covered in a mysterious set of ceramic works that tell the story of a young boy taking his dog for a walk along the Thames foreshore, and finding a strange creature that led the boy into the murky depths of the river. The work was created by Amanda Hinge. 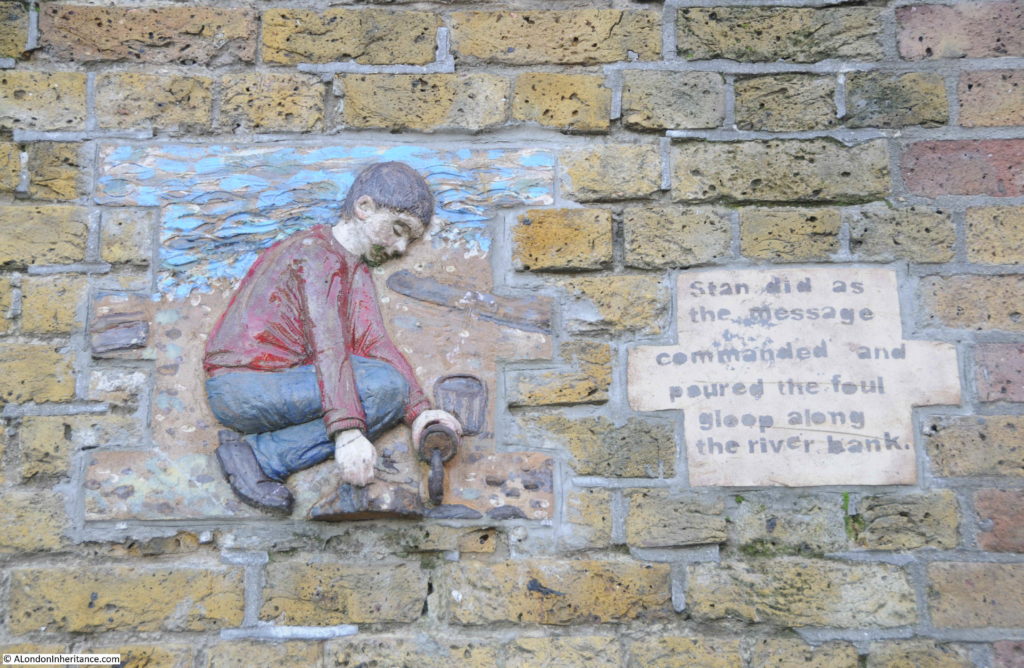 I have featured the Cutty Sark pub before, which is to the east of Trinity Hospital, if you are walking along the river from the ship, the Cutty Sark, the first pub you come to is the Trafalgar Tavern. Built in 1837, the pub stands on the site of an earlier pub, the Old George Tavern. 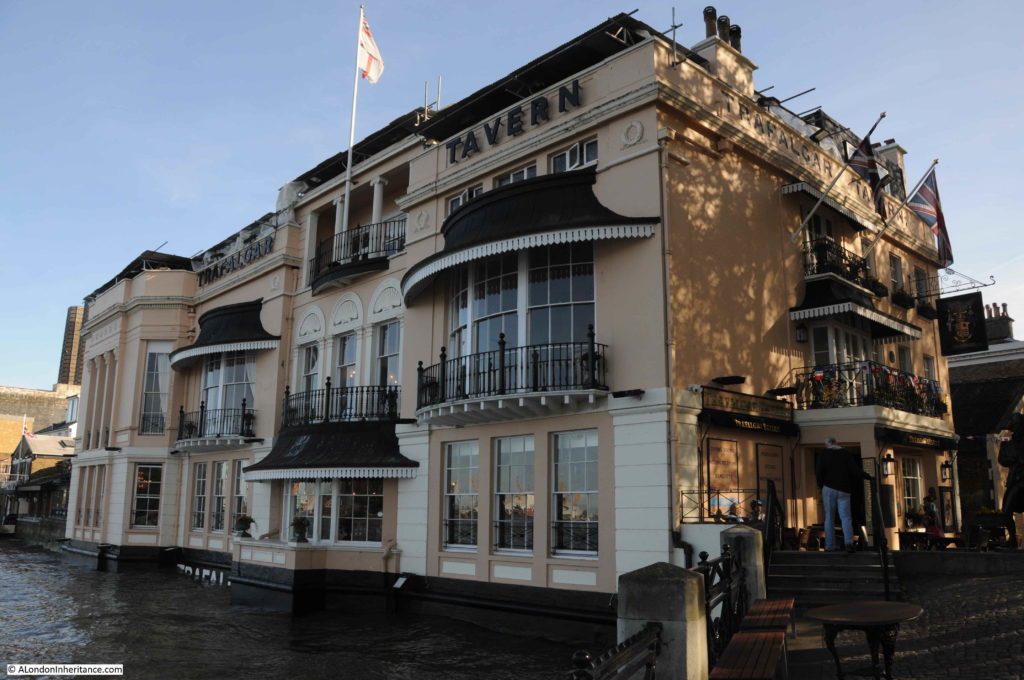 Facing directly onto the river provides a superb view from the pub, however the high tides get close to the windows.

The power station is still providing a standby capability for the London Underground. Now gas-powered, the station is cabled to a number of points on the underground network, enabling Greenwich to provide electricity should there be problems with the main supply from the grid.

Unfortunately, the chimneys are today much reduced and the original pair do not justify the 1906 title of the Heavenly Twins.

Trinity Hospital continues to provide homes for the elderly of Greenwich, so this strange pairing of buildings look set to continue living next to each other for years to come.