Hardly a week goes by without news of another London pub closing. Business rates, sudden increases in rent, demographic changes, or just the land becoming more valuable through a one-off payment for redevelopment, all conspire to an ongoing reduction in the city’s pubs.

It was therefore with some relief that I found the subject of this week’s post still there, serving as a traditional pub, and on the day of my visit, doing rather well.

This is my father’s 1952 photo of The Goat Tavern in Stafford Street: 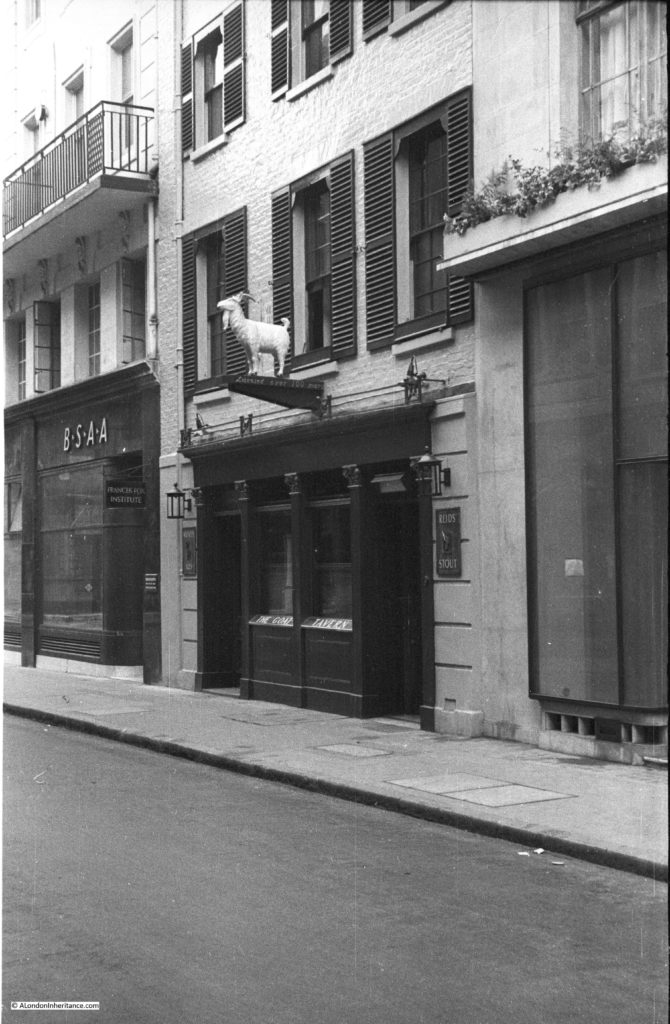 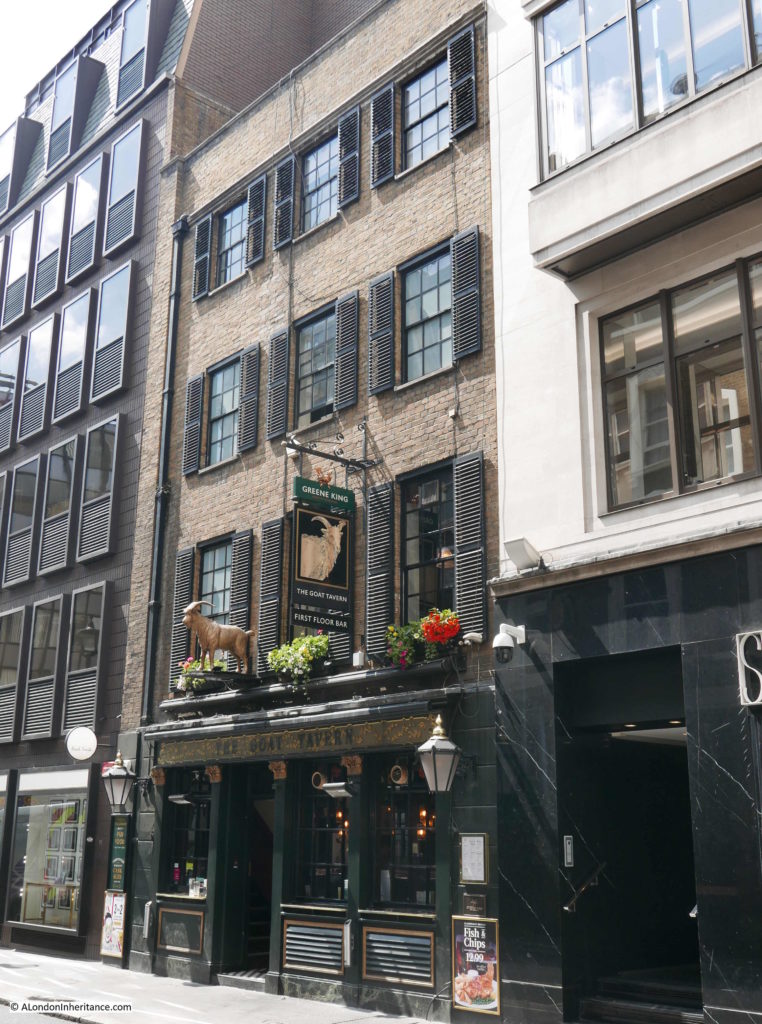 The distinctive feature of a goat still projects proudly from the front of the building. Shutters still flank the windows. I suspect that since 1952 the interior of the pub may have converted from separate Public and Saloon bars to a single bar, hence the change of the ground floor frontage to the street where the two original doors have been replaced by a single door.

Stafford Street was built in 1686, part of London’s westerly expansion when a number of the old large private house and grounds lining Piccadilly were demolished to be replaced by the streets we see today.

Clarendon House and grounds originally occupied the space now occupied by Stafford Street, Albemarle and Dover Streets. Built in 1667 by Edward Hyde, Earl of Clarendon who fled abroad soon after completion of the house. He had occupied senior positions at court and was influential in arranging Charles II marriage to Catherine of Braganza. He was blamed, probably unfairly, for a number of state problems, including the failure of Catherine to bear children.

He died in 1674, and the house and grounds were sold to Christopher Monk, the 2nd Duke of Albemarle in 1675. The property was sold again in 1683 to Sir Thomas Bond, who demolished the house, and Dover, Albemarle, Old Bond, Stafford and Grafton Streets were laid out (which gives an indication of the size of the property as it stretched all the way from Piccadilly to where the northern edge of Grafton Street is today).

The street is named after Margaret Stafford, one of Sir Thomas Bond’s partners in the development.

Albemarle Street is named after the 2nd Duke of Ablemarle, Old Bond Street after Sir Thomas Bond and Grafton Street after the 2nd Duke of Grafton who purchased part of the still undeveloped land at the north of the old Clarendon property and completed Grafton Street. Dover Street is named after Henry Jermyn, Baron Dover, also one of Sir Thomas Bond’s partners in the development.

Not one of the new streets laid out on the site of the original Clarendon House was named after either the house, or Edward Hyde, the Earl of Clarendon. Although after his death his body was returned from France and buried in Westminster Abbey, his reputation must still have been tarnished which prevented his title or name being used to name any of the streets built on his former property.

The Goat Tavern dates from this original development as the first public house on the site dates from 1686, but I cannot find any references as to the origin of the name.

The London Encyclopedia states that the Goat Tavern was rebuilt in 1958, however looking at my father’s photo and the view of the Goat today, there does not appear to be much of a change, apart from the ground floor facade, and probably the interior of the pub, so this may be a reference to when the new facade was created, rather than to a rebuild of the building.

The ground floor facade of The Goat Tavern: 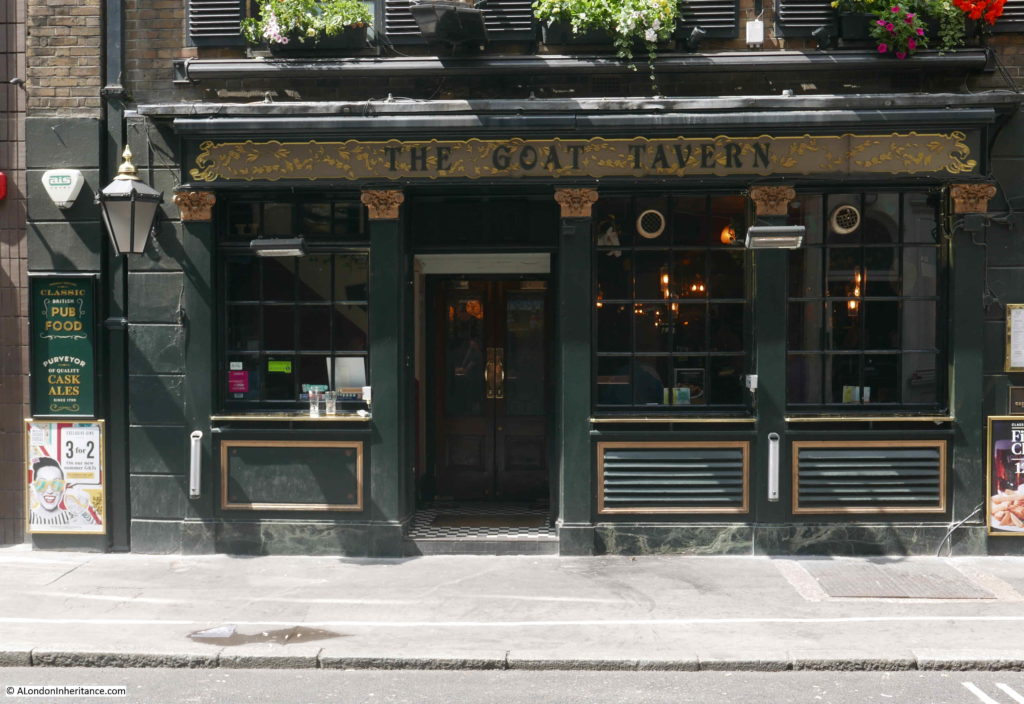 As with the majority of other London pubs, the Goat Tavern supported a number of functions, not just drinking. Clubs met at the pub, it was used for sales and auctions, and inquests into local deaths were all held in the Goat – a good example of why these establishments were called Public Houses.

Rather strangely for a pub in this location, the Goat Tavern seems to have had a naval connection. The pub’s entry in “The London Encyclopedia” states that Lord Nelson and Lady Hamilton met here.

The pub was also a meeting place and unofficial club for naval officers. Meeting at the pub was banned during the 1st World War as the authorities were concerned that naval officers meeting in a London pub would divulge operational details, putting ships and sailors at risk of enemy action. There is a reference to this in The Bystander on the 7th April 1937:

“The coming-of-age dinner of the Goat Club the other night, with Admiral of the Fleet Sir Reginald Tyrwhitt as guest of honour, must evoke for large numbers of chaps the agreeably eighteenth century air of romance surrounding the Goat Club’s foundation. Most people know how, in 1915, when the Admiralty prohibited naval officers in uniform from visiting licensed premises, the lady of the Goat Tavern in Stafford Street, Piccadilly, known to all and admired by every ward and gun room in the entire Navy as ‘Bobby’, wrote to Their Lordships asking if she mightn’t form a club to keep ‘my huge family’ together; how Their Lordships gracefully bowed to the lady’s wishes; and how the Goat Club started in Regent Street, to the great content of 2000 officers of H.M. ships of war and, undoubtedly, to the great vexing of an almost equal number of enemy spies.”

Remarkable to imagine that this pub, tucked away north of Piccadilly, was once known throughout the navy, with officers meeting in the pub and enemy spies trying to discover naval secrets from drunken sailors.

An event in 1822 provides an indication of how those employed as servants were treated, from an advert in the Morning Advertiser on the 9th May 1822:

” FIVE POUNDS Reward – LEFT, about Four o’clock this afternoon in the tap-room of the Goat, Stafford Street by a servant, who will have to make the amount good, a SMALL PARCEL, containing eight Table-spoons, and twelve ditto Desert ditto, cypher E.B. Whoever has found and will bring the same to Mr. Lilford, at the bar of the said house, shall receive the above reward.”

I bet the five pounds reward was also deducted from the servants pay if the missing items were returned. 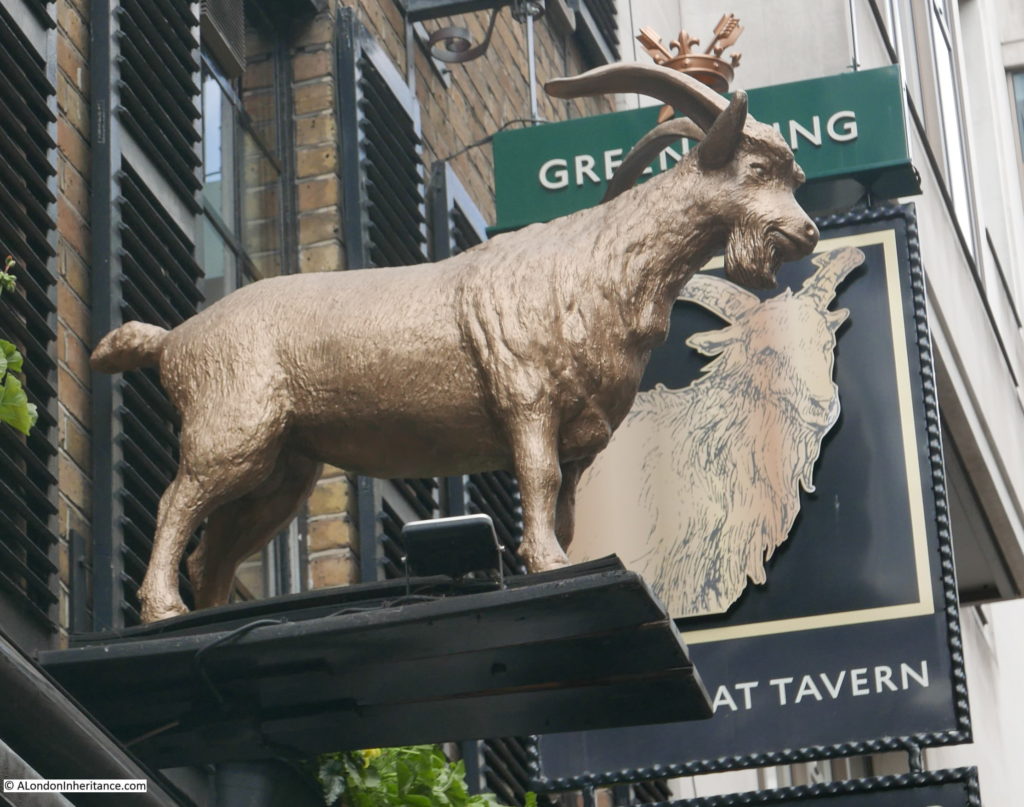 The following is an extract from my father’s 1952 photo. The goat is a different model to the one we see today, and the platform on which the goat stands states that the pub had been licensed for over 100 years. 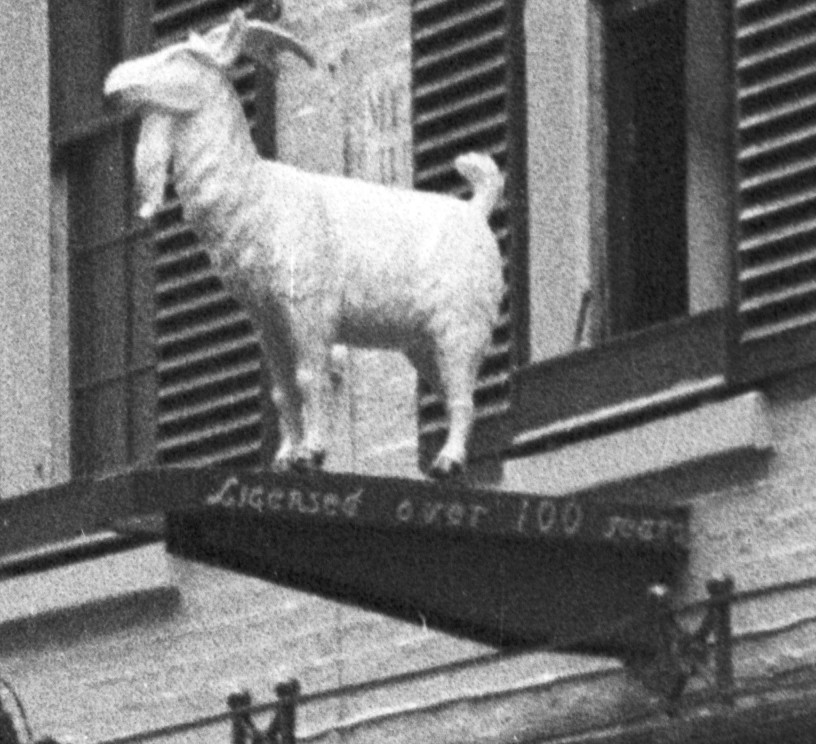 Stafford Street is a relatively short street of around 105 metres, however according to the 1895 Ordnance Survey map, there were 3 pubs in Stafford Street at the end of the 19th century (I have a theory which I have not had the time to either prove or disprove that the decades either side of the year 1900 were London’s “peak pub” period).

I walked along Stafford Street to see if the other two pubs were still in existence.

On the corner of Stafford Street and Ablemarle Street is The King’s Head in a rather nice 19th century building. 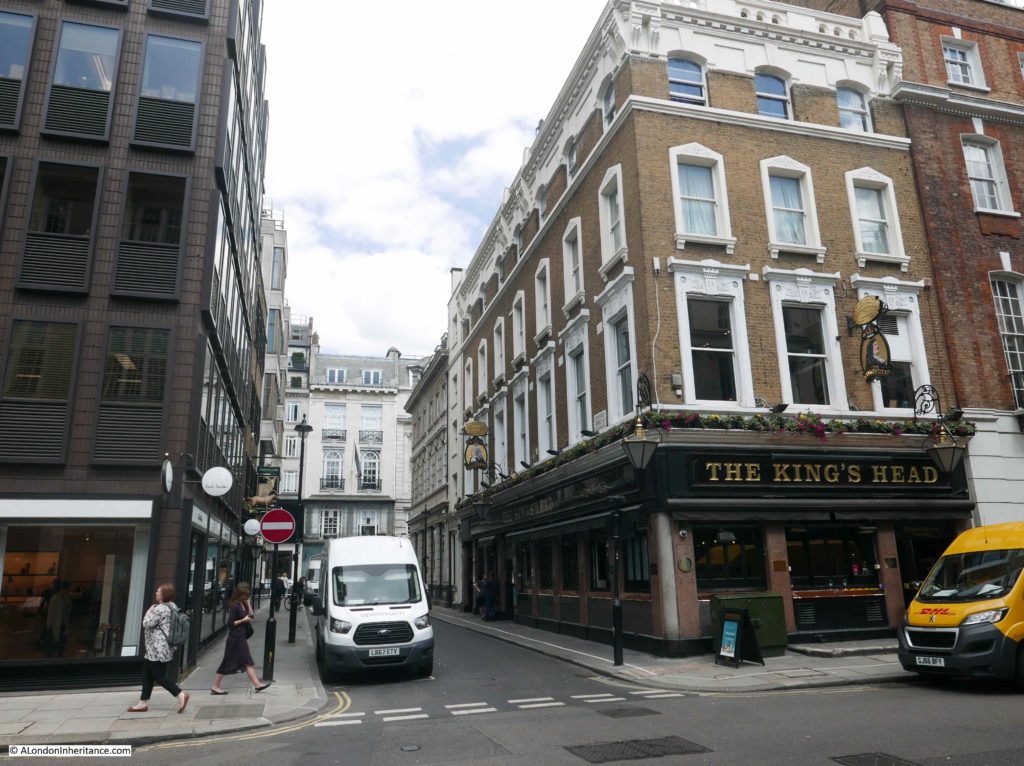 The next pub should have been on the corner of Stafford Street and Dover Street, however the ground floor is now occupied by a shop. 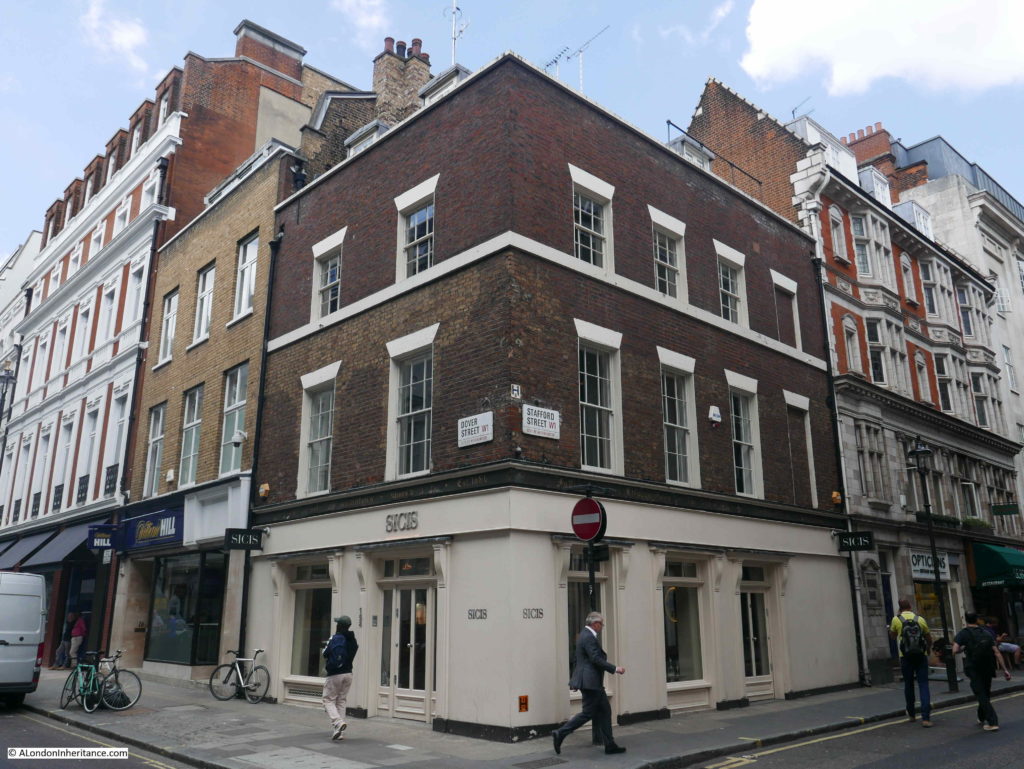 This was the Duke of Ablemarle pub, a pub that appears to be from the original building of the streets, however closed in 2006.

The LMA Collage archive has a photo of the Duke of Ablemarle as it appeared in 1944: 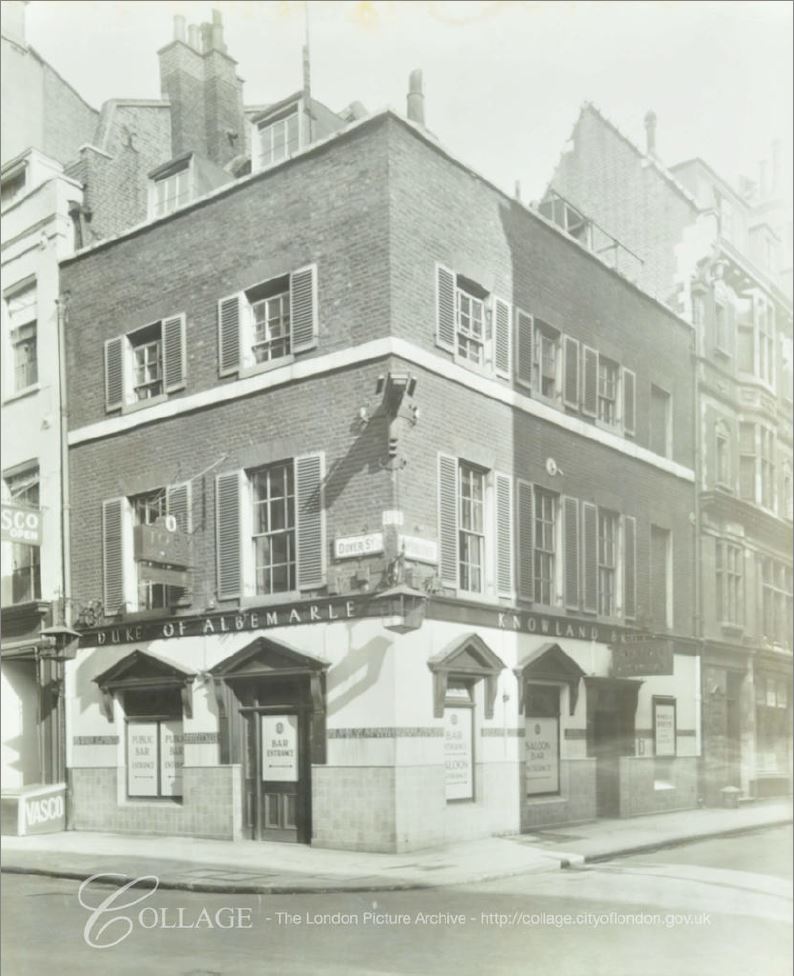 If you look above the shop today, the black panel that extends along the length of both sides of the building has the pub name, the year 1686 as the year the pub was established, along with other typical pub wording. 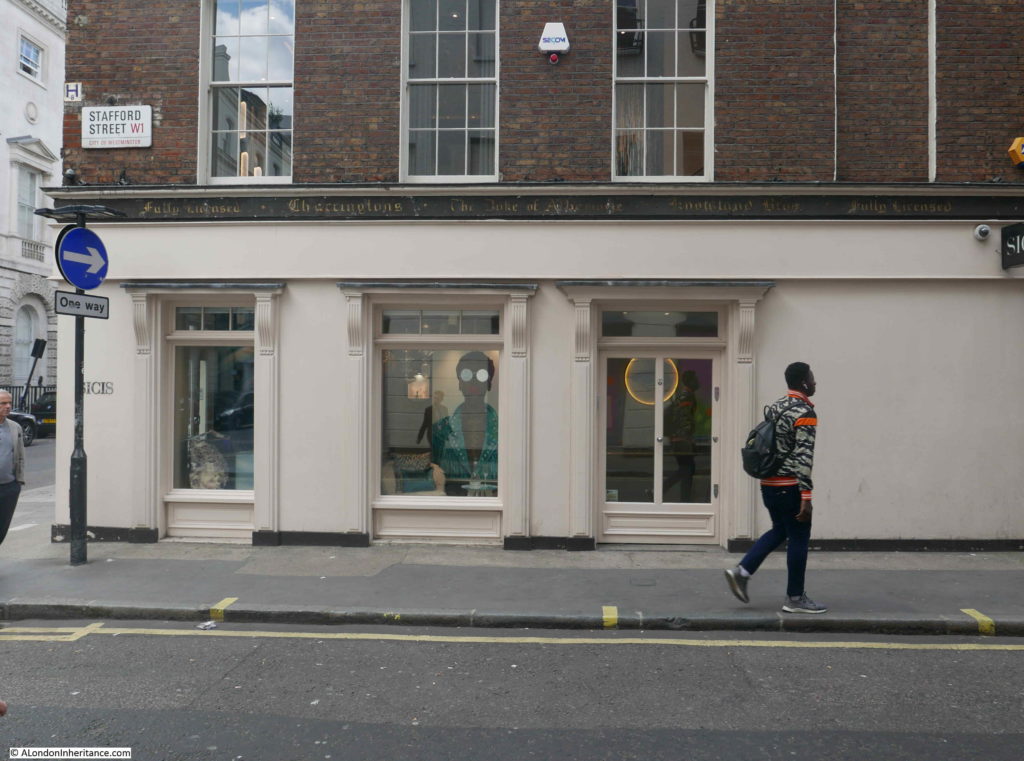 The style and state of this writing gives the impression that this is of some age, however looking at the photo of the pub in 1944, the pub has the black panel extending along both sides with the pub name in large letters, however I cannot see the writing that appears today.

The ground floor of the old Duke of Ablemarle in Dover Street. 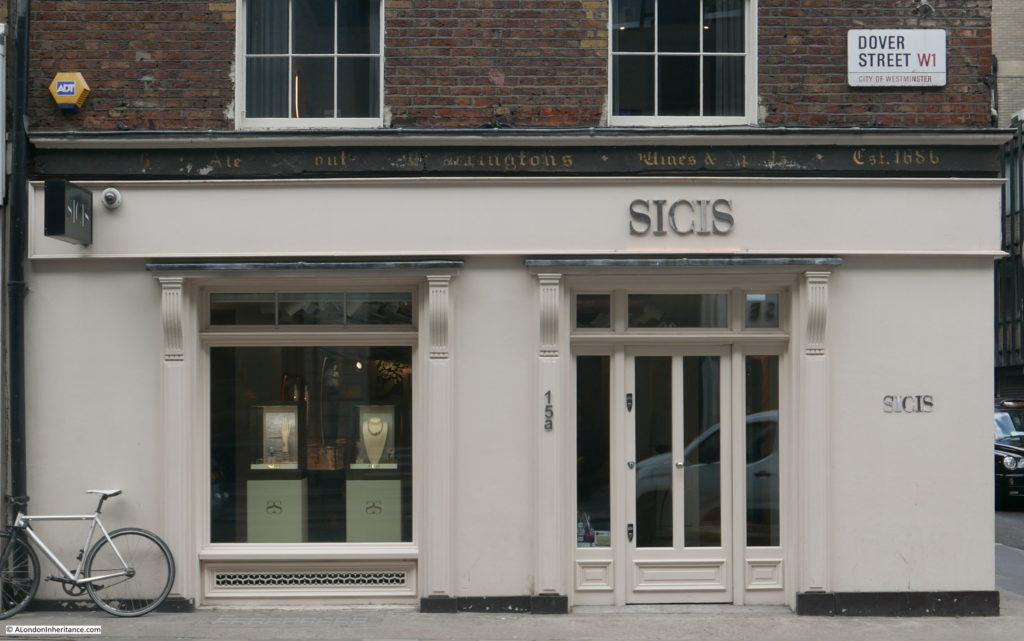 Given how fast pubs have been disappearing in central London, two out of three remaining in a relatively short street is a good result.

None of the original buildings from the 17th century development of Stafford Street remain, although looking at the building that was the Duke of Ablemarle pub, I would not be surprised if there was part of the original corner building remaining in the existing structure.

The majority of the buildings look to be 20th century, although the King’s Head pub is 19th century.

There is a variety of architectural styles and use of materials in the buildings that line the street today. Some having some rather nice features, often hard to see.

On the corner of Stafford Street and Old Bond Street is Swan House. 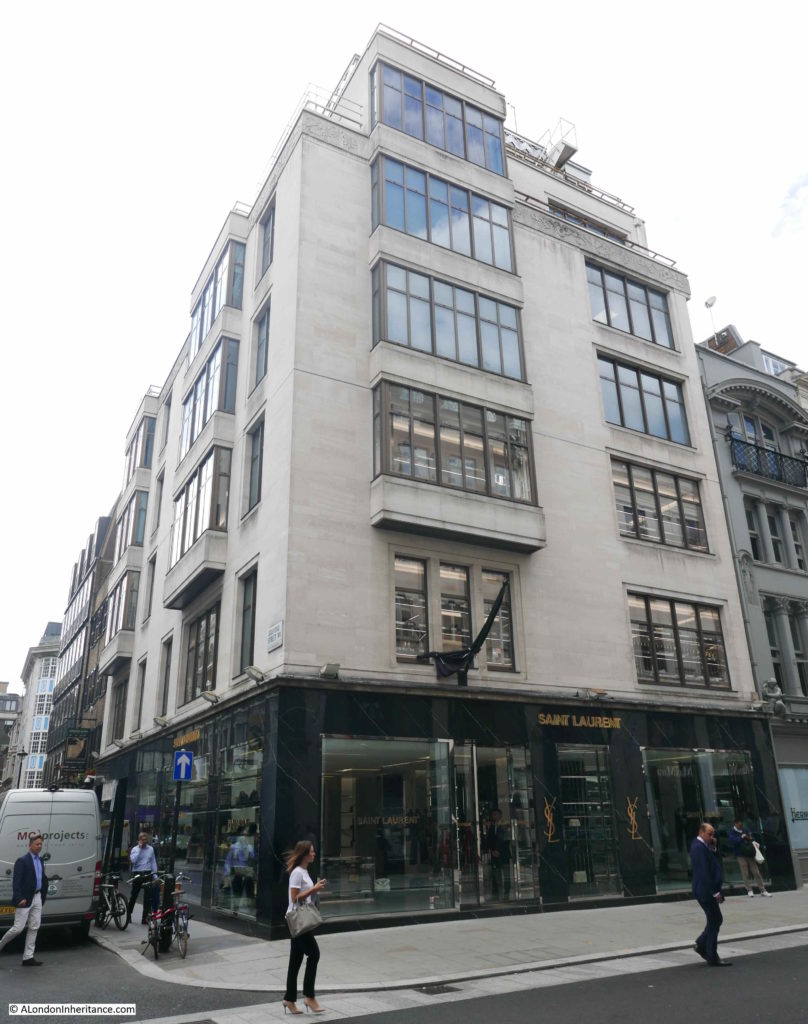 The ground floor is currently a Saint Laurent shop, but along Stafford Street is a rather nice building name: 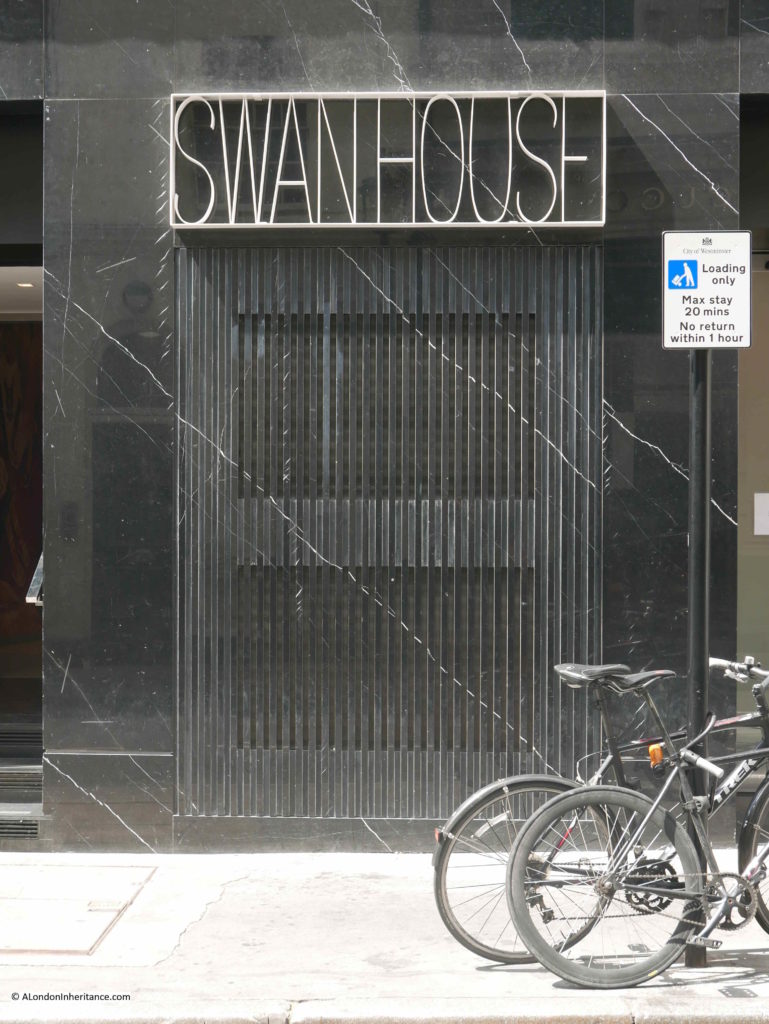 And if you peer at the top of the building, there are some not easy to see features: 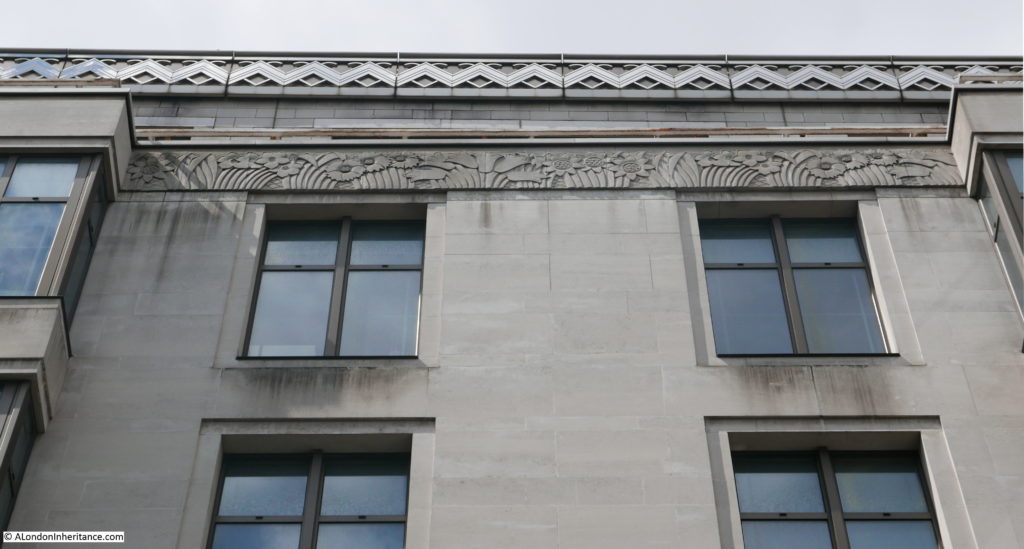 Further down is Stafford House: 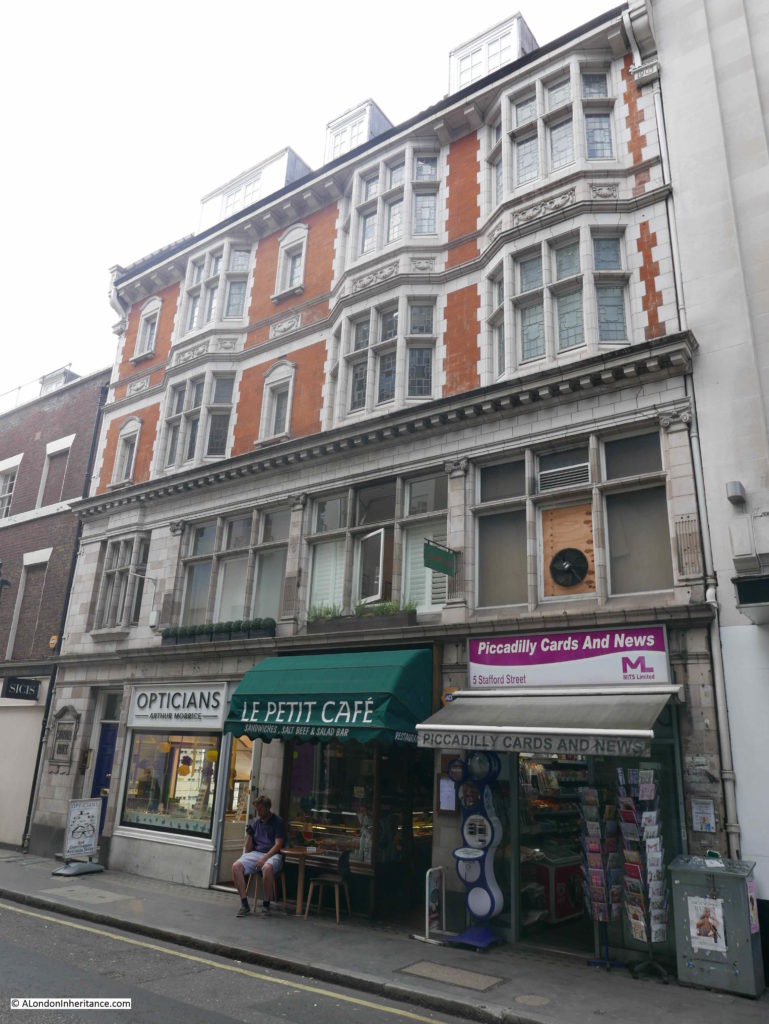 Stafford House gives the impression that one architect has designed the ground and first floors, then a second architect has completed the second and third floors to a completely different design.

The Goat Tavern is a lovely pub with a fascinating history. I hope the Goat continues to stand proudly overlooking Stafford Street for many years to come.