The following photo was published in a January 2016 post covering locations I had not identified. I have no idea why I did not recognise this pub, having walked past it many times and been inside on a number of occasions. The sign on the front also had part of the name. Luckily there were a number of readers more observant, or with a better memory than me as it is the Hand and Shears at 1 Middle Street at the junction with Cloth Fair, close to Smithfield Market and the church of St. Bartholomew the Great. The photograph was taken by my father in 1952. 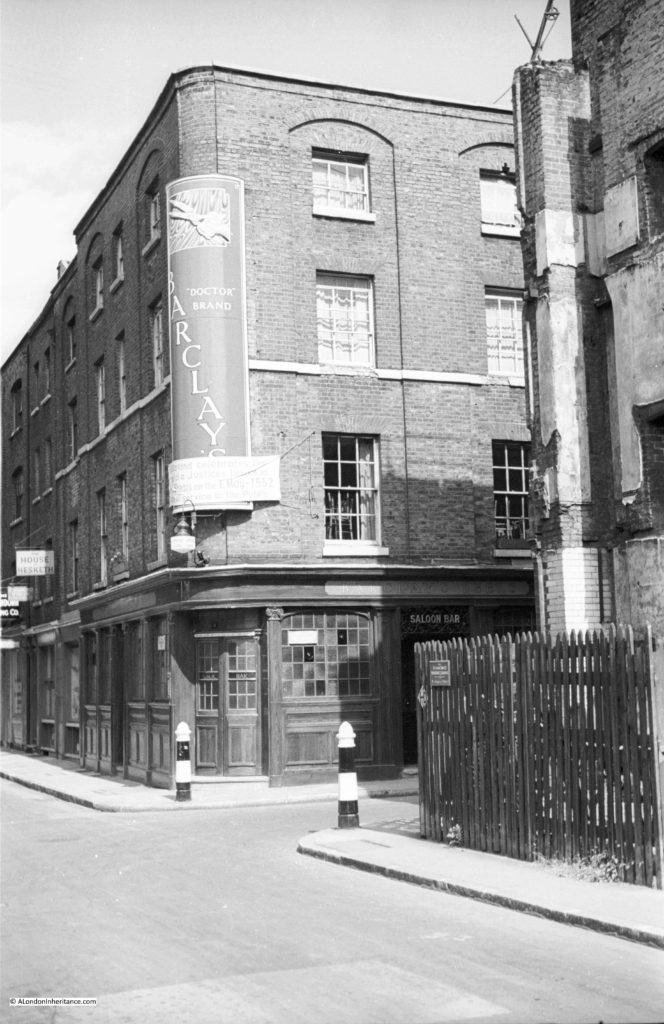 Last week I had the opportunity for a visit to the pub which is still looking very good, sixty-five years after my father’s photo. 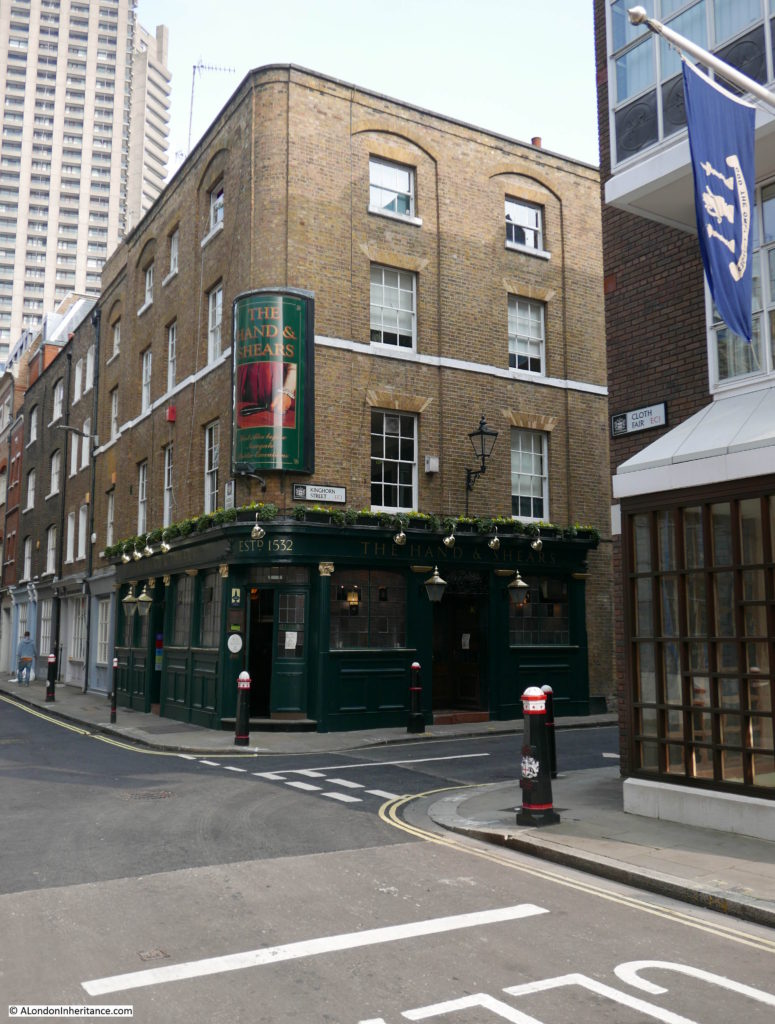 The name of the pub should have been obvious from the sign on the corner of the building. There is the symbol of a hand and shears at the top and part of the name is given at the bottom of the sign which reads:

“Moorland celebrates the grant of a Justices Licence to …Shears on the 1st May 1552 …. of service to the Public”

The words before Shears must be ‘Hand and’ and I suspect after 1552 it may have read ‘for years’.

The Justices Licence refers to the Alehouse Act of 1552 which defined in law that it was illegal to sell beer or ale without the consent of the local Justices of the Peace. This was the first time that a licence was required to sell beer and ale and was an attempt to address the drunkenness and disorder that was being caused by the widespread availability of alcohol.

The Act required that each person granted a licence was responsible for maintaining good behavior at their premises and any problems could result in a fine or loss of licence. From the sign it appears that the Hand and Shears was granted a licence in 1552.

The pub must have been working prior to the grant of a licence as a sign above the door states that the Hand and Shears was established in 1532 so a pub has been on the site for almost 500 years.

One more comment about the large sign on the 1952 pub, it is also advertising the brewery Barclay’s “Doctor” brand. This referred to beer brewed by the brewery that had a picture of Dr Johnson on the label.

The building that the Hand and Shears occupied in the photos above obviously does not date from 1532. It was built around 1852 as the following picture of the pub is dated 1852 and is of the new building of the Hand and Shears. It has hardly changed in 165 years. 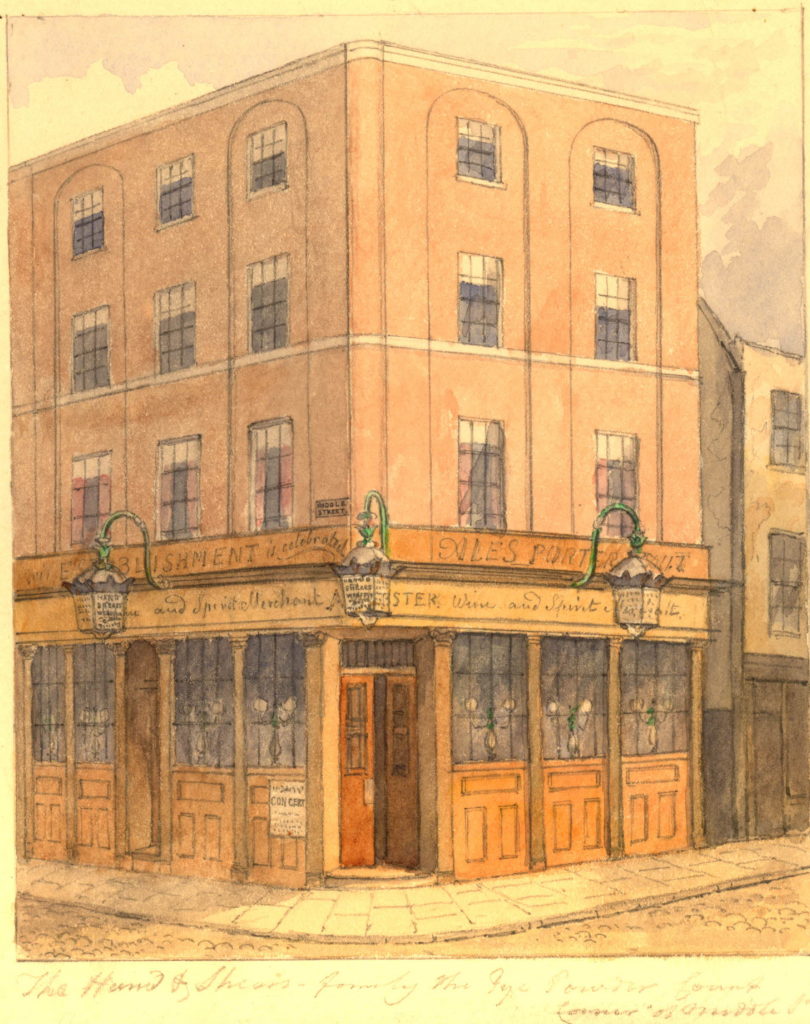 The name Hand and Shears probably originates from the early days of Bartholomew Fair when it was the England’s main cloth fair. I have read a number of different sources attributing the name to either the use of shears at the fair, the cloth workers or the Mayor of London opening the fair by cutting the first piece of cloth.

The Hand and Shears prior to the nineteenth century building occupied the building shown in the following 1811 etching. 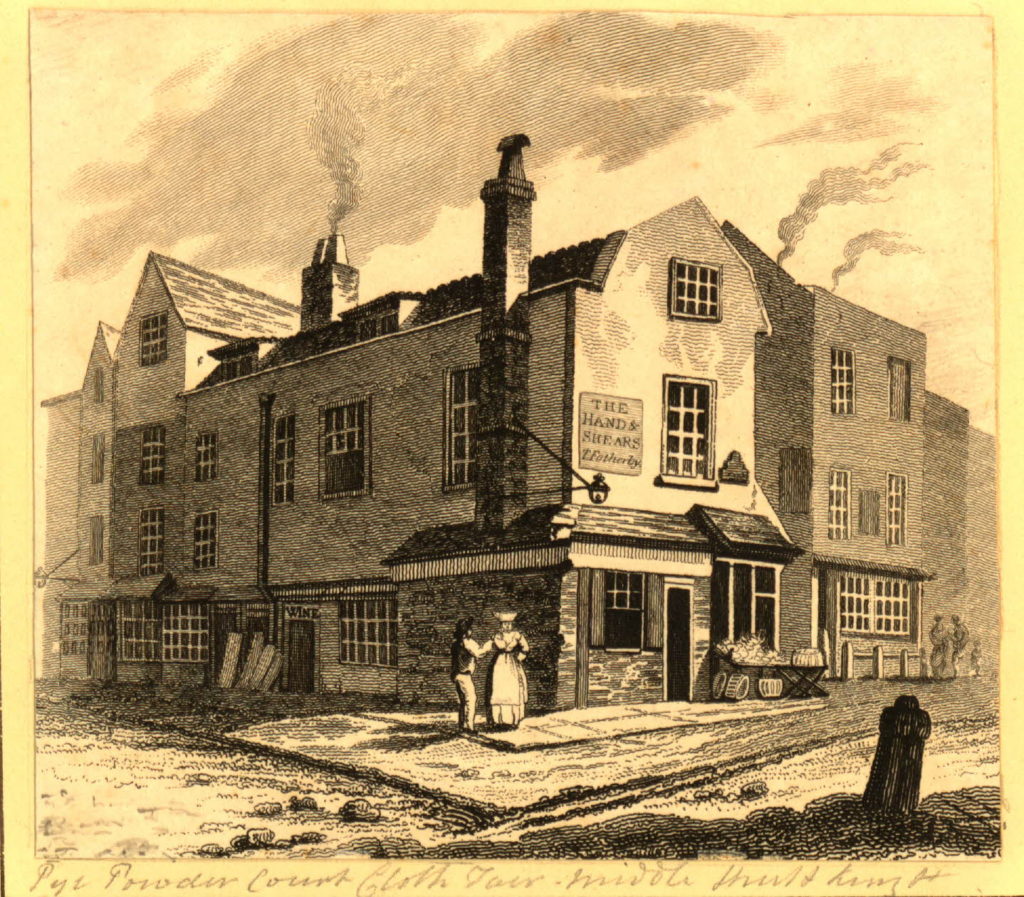 The title to the above etching is Pye Power Court, Cloth Fair.

Pubs provided many functions to their local community in addition to selling beer. Inquests would be held in the building, meetings of various societies, they organised sporting events and for the Hand and Shears there was the special role of the hosting the Pye Powder Court.

A Pye Powder Court dates from medieval times when the role of the court was to have jurisdiction over disputes between merchants and the public at a market or fair. They would also cover any other general dispute arising on fair grounds.

The name Pye Powder comes from ‘pied puldreaux’ the French word for Pedlar.

The Pye Powder Court held in the Hand and Shears had jurisdiction over the Cloth Fair and later Bartholomew Fair in nearby Smithfield.

Pye Powder Courts fell out of use in the mid-nineteenth century. Some of the last were held in the Hand and Shears and the following report from the Illustrated London News dated the 5th September 1846 covers one of these events:

“BARTHOLOMEW FAIR – On Wednesday, the usual proclamations for holding the fair were issued from the Pie-Powder Court, but the preparations presented the prospects of a very sorry realisation of the pleasures of this once favourite and popular place of metropolitan resort. The Pie-powder Court, one of the most expeditious, if not one of the most ancient courts of law in the kingdom, and to which the administration of the law on all matters pertaining to the fair, or offences committed in it, was confided, is now almost limited to Bartholomew Fair, where its duties are confined to the receipts of piccage, stallage and tollage. The court, whose proceedings are now merely nominal, is still held at the Hand and Shears public-house, in Cloth Fair.”

The terms piccage (money paid at fairs for breaking ground for a booth) and stallage (rental or fees for holding a stall in a market), like Pye Powder both have French origins so must date from the medieval period and the use of French for many legal regulations after 1066.

The following page is from Londina Illustrata published in 1811 and shows the Pye Powder Court in session. The text below the picture of the Hand and Shears reads “This Court is held at a Public House, known by the Sign of the Hand and Shears, the corner of Middle Street and King Street, as exhibited in the Vignette. The scene above, is descriptive of the Court held in the dining room, where the judge, attended by his secretary, is determining a cause between two histrionic complaints, respecting some injury sustained in the neighbouring fair of St. Bartholomew, by one of the parties.” 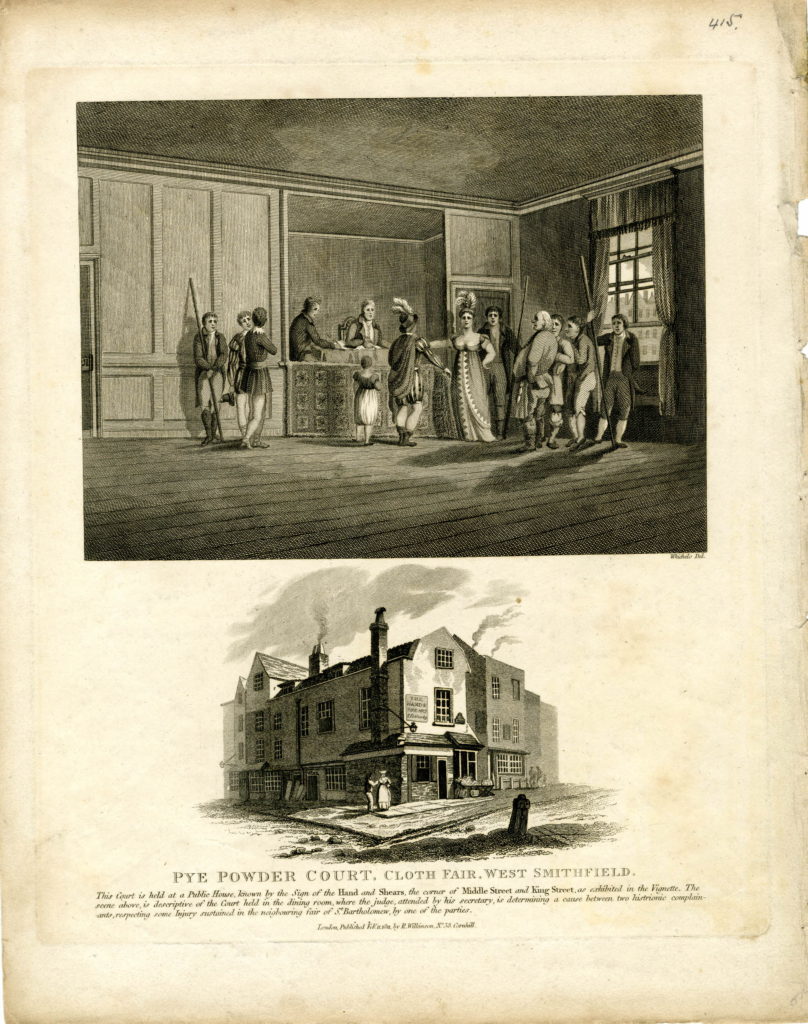 As well as the Pye Powder Court, other activities carried out at the Hands and Shears included inquests into deaths. There are numerous reports of these and they show the almost casual nature of death and lack of accountability in the city – I would recommend a read of 19th century newspapers for anyone who today criticises red tape and health and safety.

One report from the London City Press on the 18th February 1860 reads:

“FATAL ACCIDENT IN REDCROSS SQUARE – On Tuesday, the Coroner held an inquest at the Hand and Shears, Cloth-fair, on the body of George William Killby, aged 19 years, son of Mr. Inspector Killby of the City Police Force, whose death was occasioned under the following circumstances – On Monday, the 6th instant, the deceased and a young man named Joseph King, were walking along the above square on the foot-pavement, and upon arriving nearly opposite the gateway of Messrs. Treggon’s zinc manufactory, a loaded van was being drawn out of the gateway by a man in their employ, two others pushing behind, when, in consequence of there being a slight decline, the van overpowered them, and the off shaft pinned the deceased against the wall, the near shaft making a hole in the wall. He was extricated as soon as possible, and removed to his residence in Bartholomew-close, and Mr. Timothy, surgeon, of Barbican, attended him, and rendered every assistance; but he gradually declined and died on Saturday from inflammation of the bowels, the result of the injury.

The Coroner summed up, and the jury, after having consulted together, the room having been cleared, ultimately returned a verdict of ‘Accidental death’; but they considered that vans should not be drawn out of the gateway in question without a horse, as this was not the first accident that had occurred, though fortunately the others had not been attended with loss of life.”

A full view of the Hand and Shears. The sign today boasts that the pub is the opportunity for the Last Ales before Newgate Public Executions. 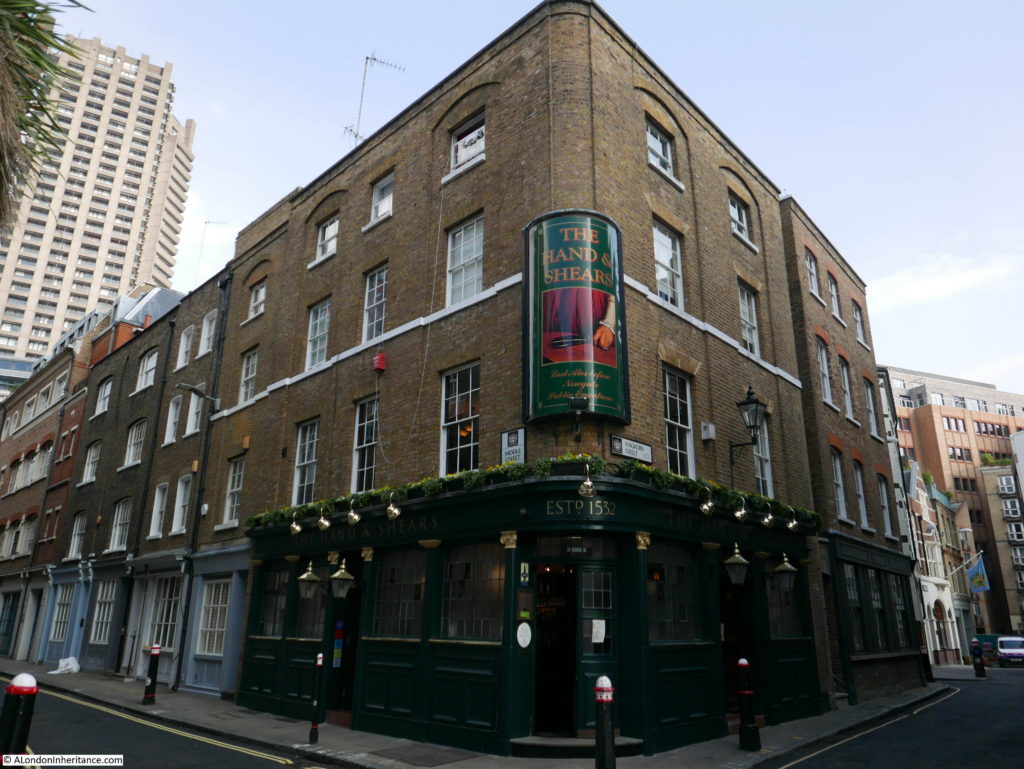 The Hand and Shears was also the meeting place of the Bartholomew Club, a club of local people who met to discuss current political issues and points of historical interest, and the London City Press on the 22nd December 1868 reports on the annual dinner of the members and friends of the club, held in the Hand and Shears where a “substantial and satisfactory” dinner was provided. There followed a very large number of toasts, and proposing the health of various members and at the end “the company departed after spending a very agreeable and harmonious evening. 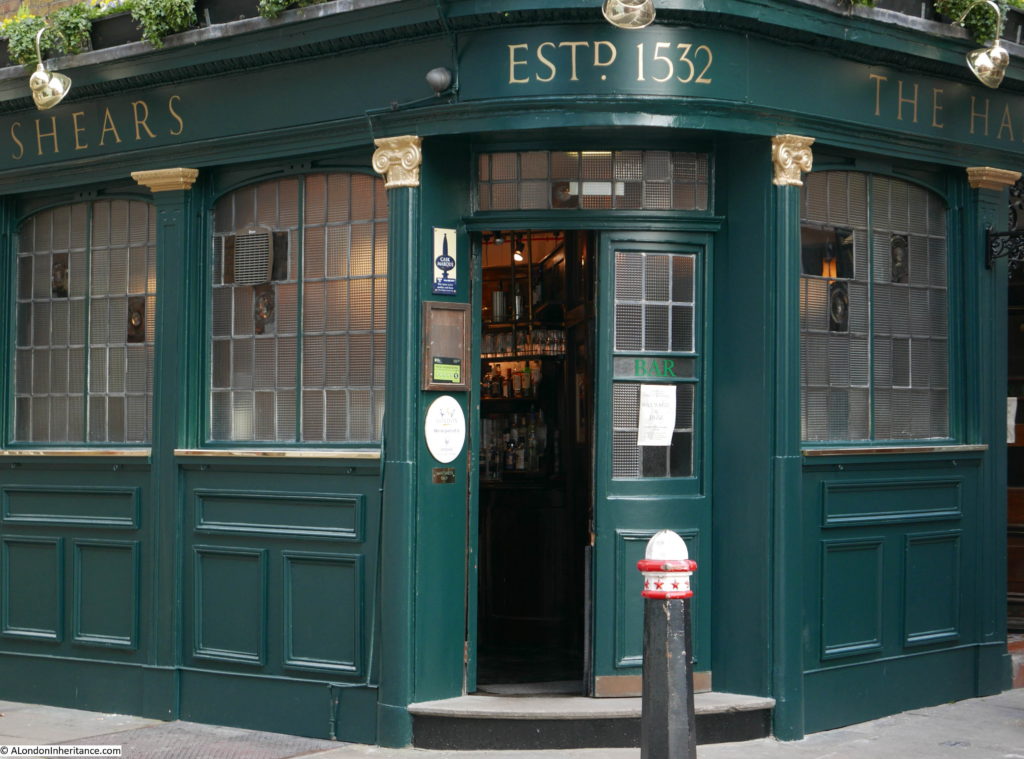 The entrance to the Saloon Bar on Kinghorn Street: 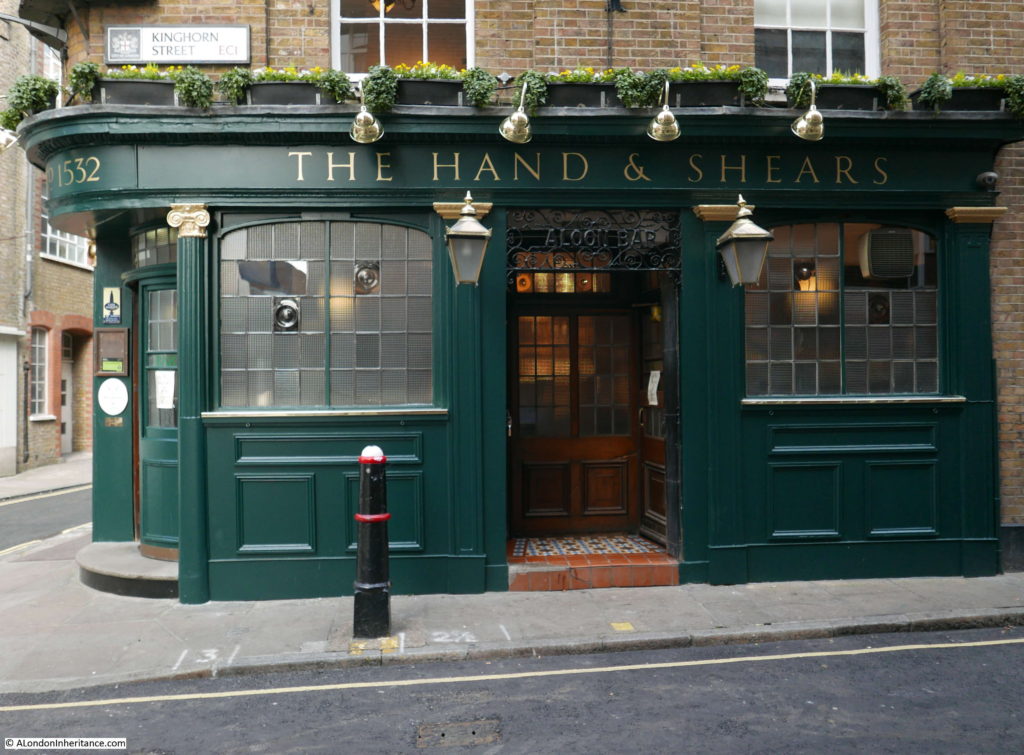 Tiled entrance to the Saloon Bar: 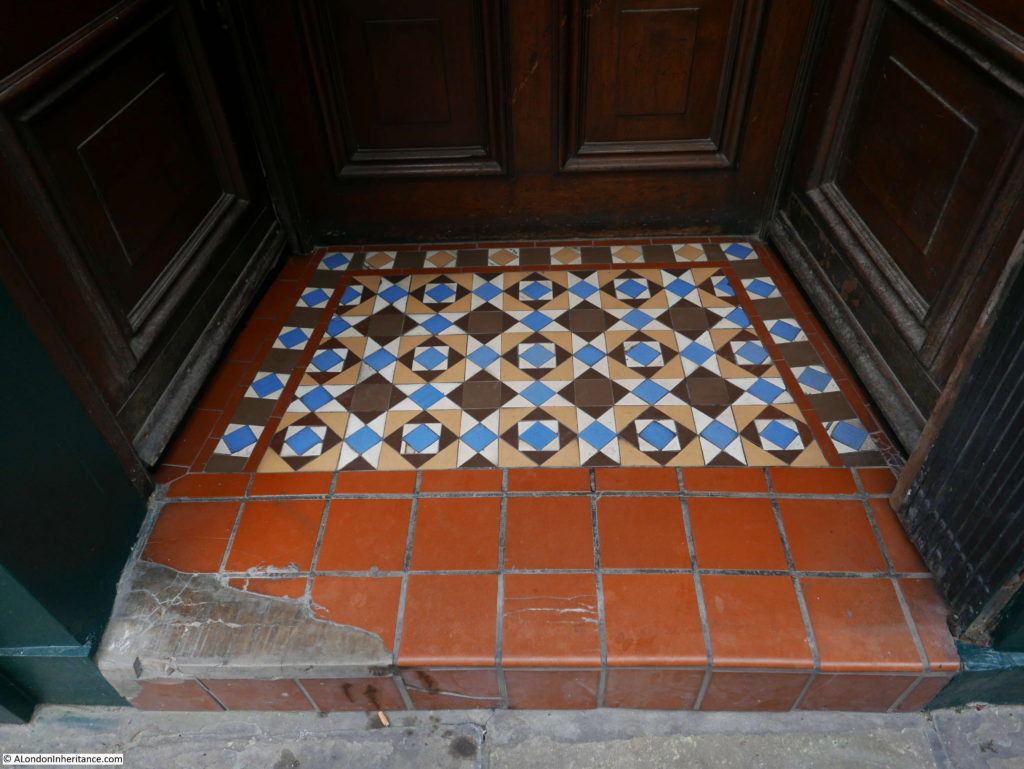 Internally the Hand and Shears is a wonderful pub. A central island bar around which are the public and saloon bars (although there is very little difference between the two). I visited on a Tuesday afternoon which probably explains why it was so quiet, it is usually much busier at lunchtime and evenings. 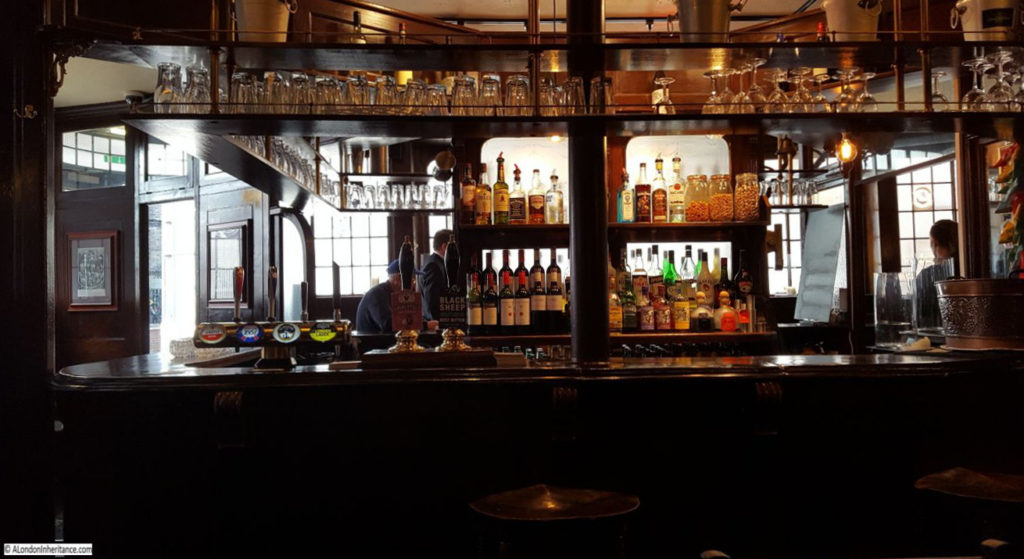 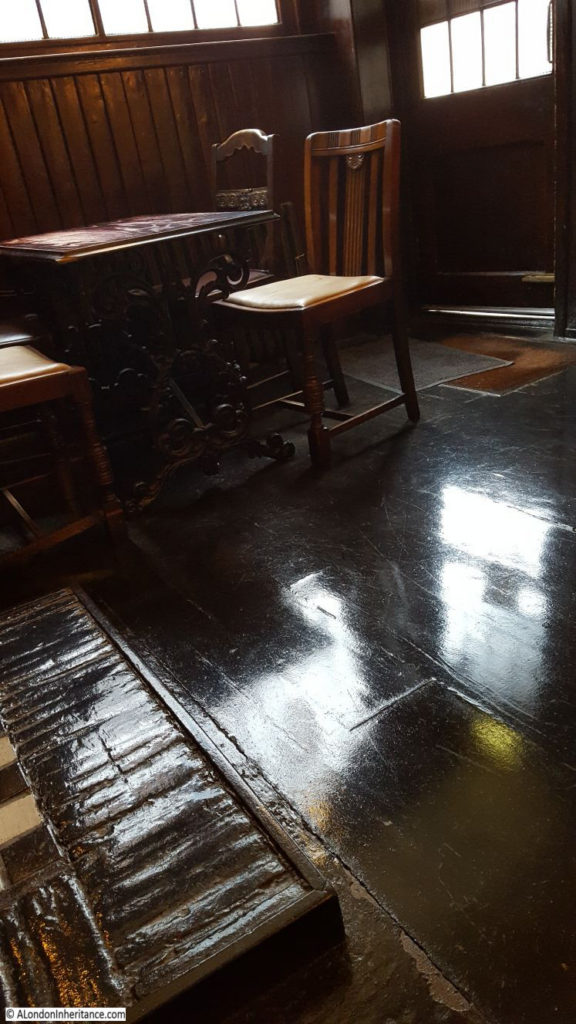 It is fascinating to sit in the Hand and Shears with a pint and contemplate all the people and events that have taken place here over the years. Both the exterior and interior of the pub appear to have hardly changed since the pub was built.

Whether it will remain in the future must be a concern given the fate of so many pubs across London. The area around Smithfield will change considerably over the coming years.

Walk through the short passage opposite the Hand and Shears to Long Lane and a sign of these changes can be seen in the form of the new Farringdon Station on the Crossrail / Elizabeth Line. 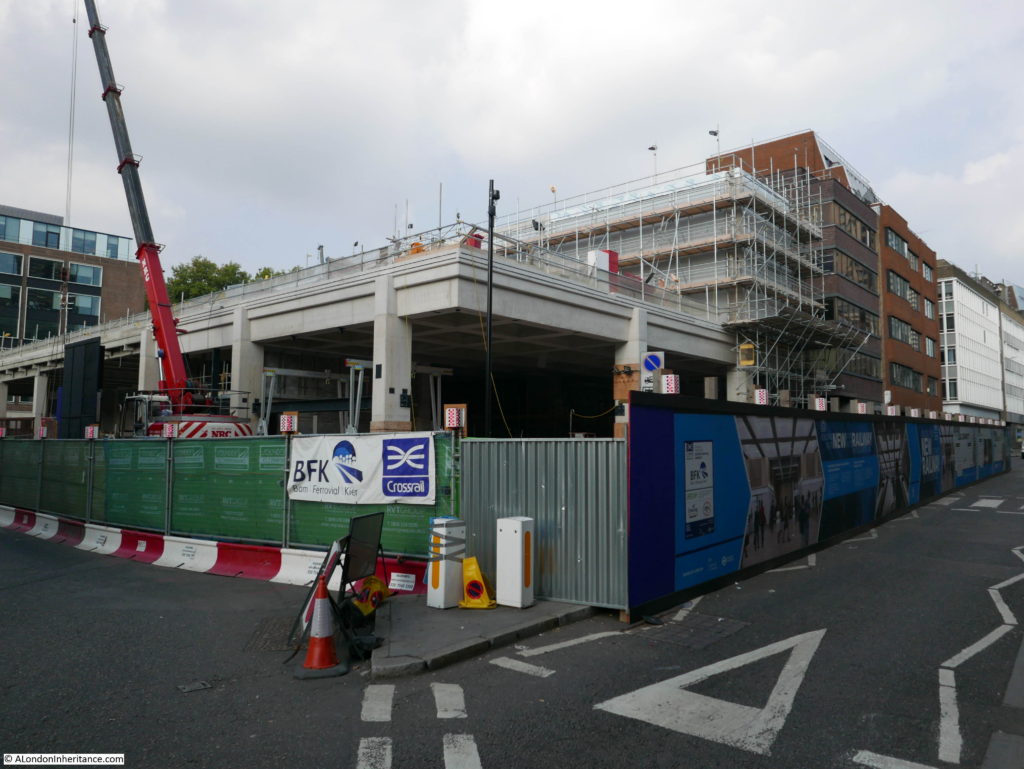 Future Smithfield developments also include the relocation of the Museum of London which will occupy part of the old market buildings. This area will change significantly.

As well as the Hand and Shears, there are a number of long-standing small businesses in the area. Along Long Lane is Evans and Witt (supplier of all manner of office supplies) which still retains the 01 telephone number on the facade. 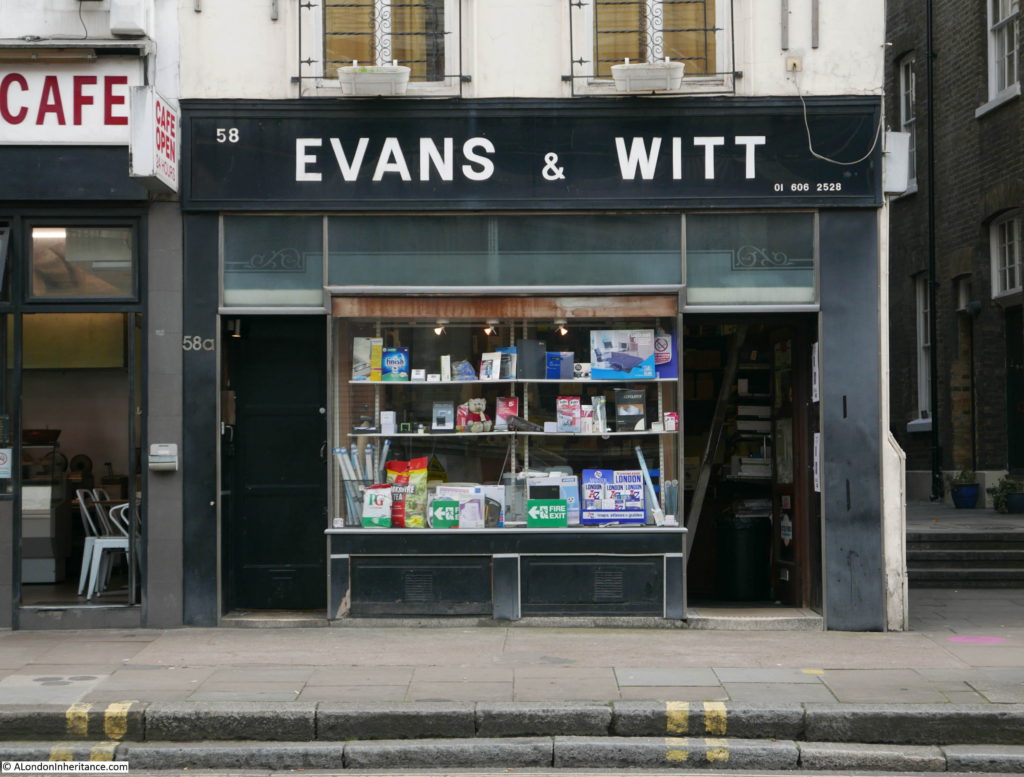 And the Smithfield Cafe: 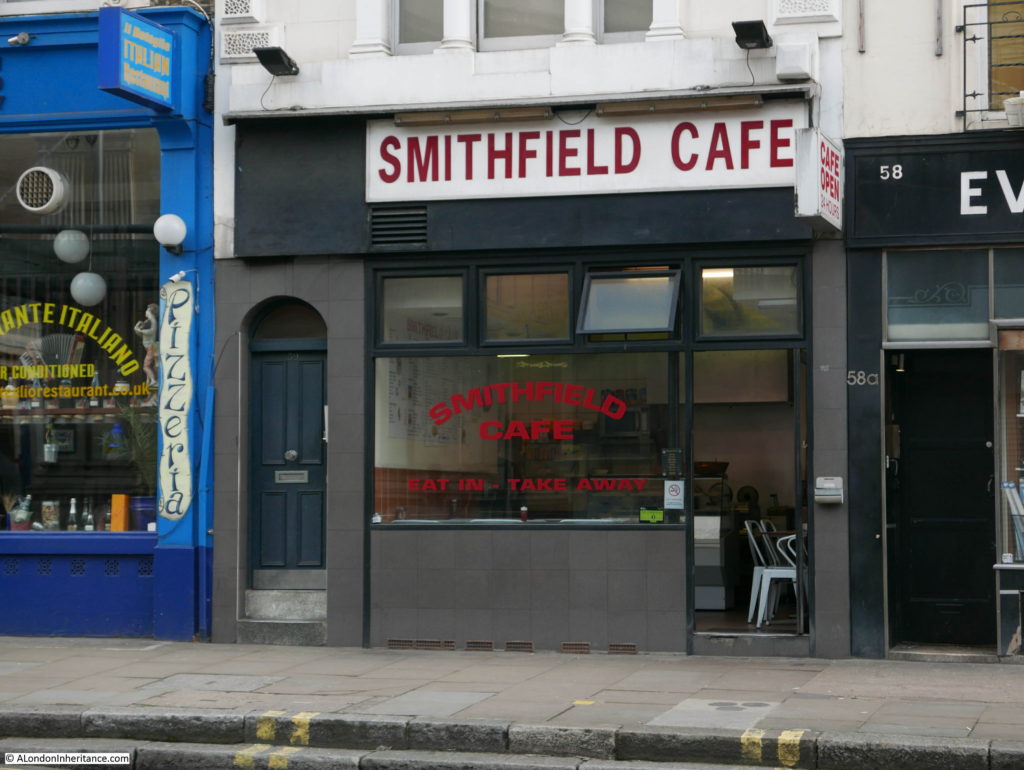 Many of the pubs my father photographed have disappeared. I have already written about the Tiger Tavern, the Gun Tavern and the Ticket Porter, so it is great to see the Hand and Shears still in business and much the same as when he took the original photo back in 1952.

I hope it stays as it is and in business for many years to come.

21 thoughts on “The Hand And Shears”