After visiting the town of Chepstow and the River Wye in last Sunday’s post, in this post I explore Chepstow Castle – one of the earliest Norman castles in the country.

Chepstow Castle is on a large limestone cliff overlooking the river and town. Construction started in 1067, the year after the Battle of Hastings and the coronation of William the Conqueror as King William I.

William had given Chepstow to William Fitz Osbern, the Earl of Hereford and it was William Fitz Osbern who started construction of the castle. The castle passed to William Marshall in 1189 and stayed in the Marshall family until 1245 when the Marshall estates were divided between five daughters with Chepstow going to Maud Marshall and through Maud’s marriage to Hugh Bigod, the 3rd Earl of Norfolk, it passed to the Bigod family.

As the castle passed through various families, it was extended considerably, existing buildings were remodeled and the castle lived a relatively peaceful life until the Civil War.

This is the 1947  view of the castle from across the River Wye. The castle is rather hard to see, but is behind the bridge, on the left bank of the river. The castle from a distance can appear to blend in with the cliffs on which it is built. 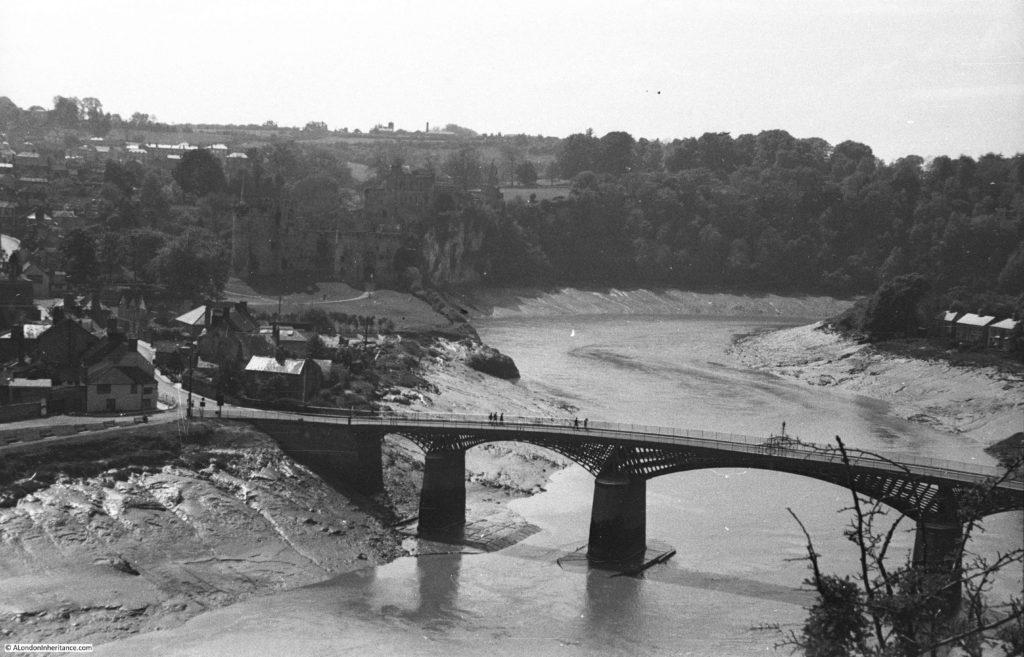 And this is the view in 1947 taken from one of the castle towers looking back towards where the above photo was taken. 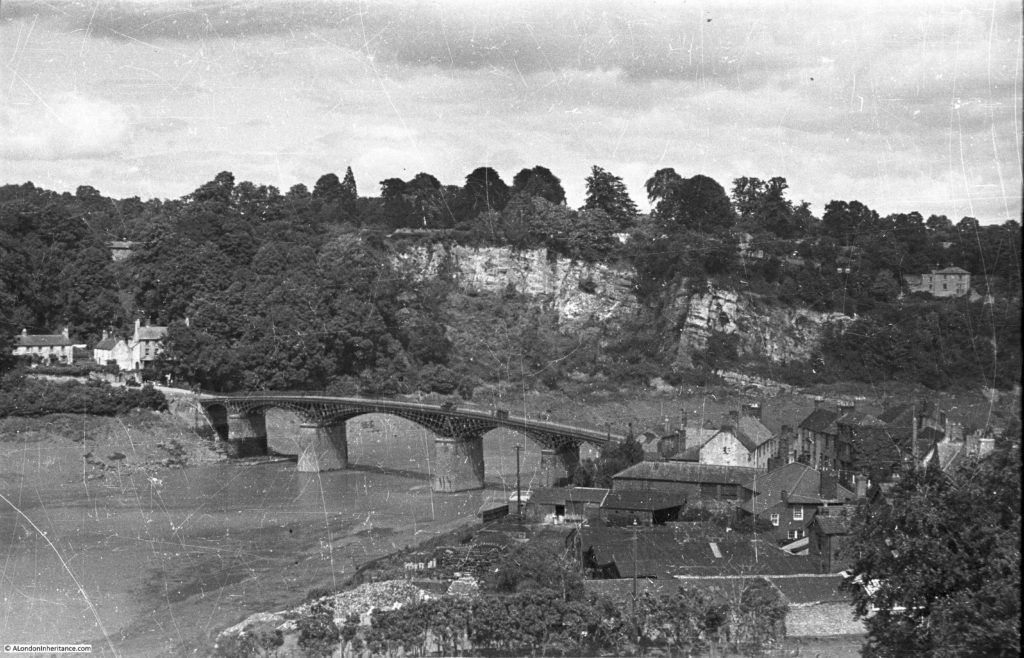 The same view today. The buildings at both ends of the bridge are the same, however the buildings at the bottom of the 1947 photo have been cleared to make way for a large car park and the visitor centre which are located directly in front of the entrance to the castle. 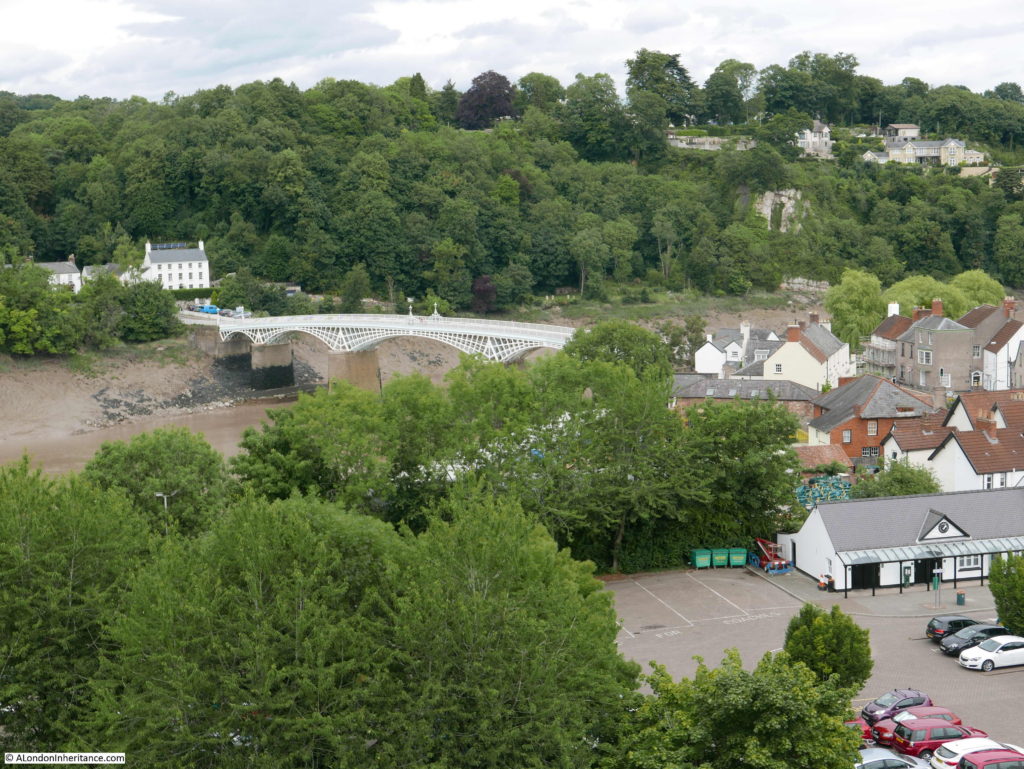 A 1947 view of the external walls and towers of the castle: 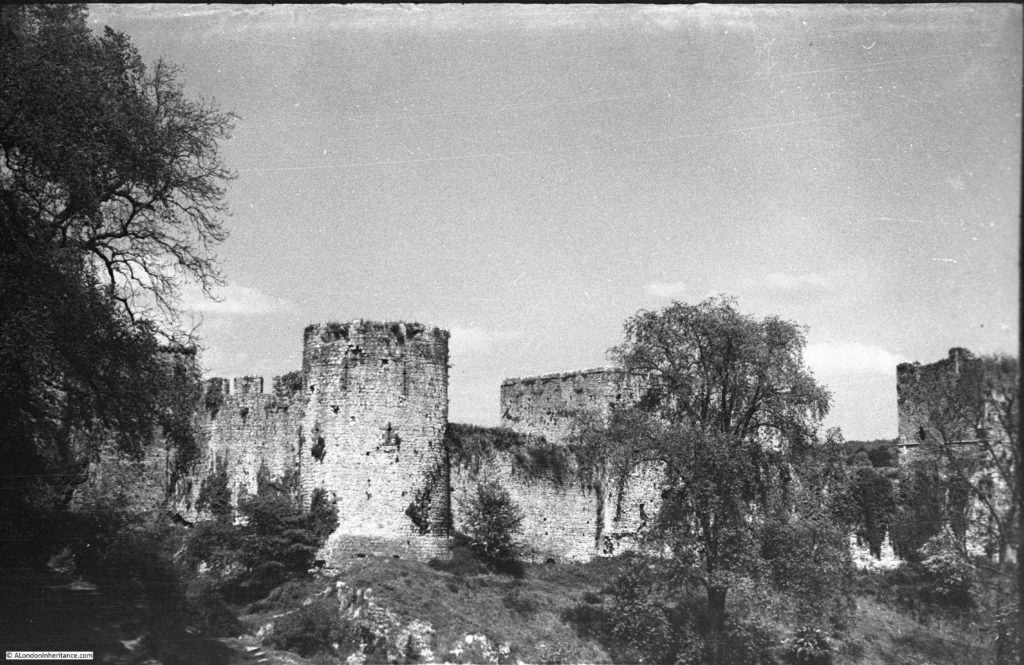 Another view from inside the castle looking over the river and bridge. 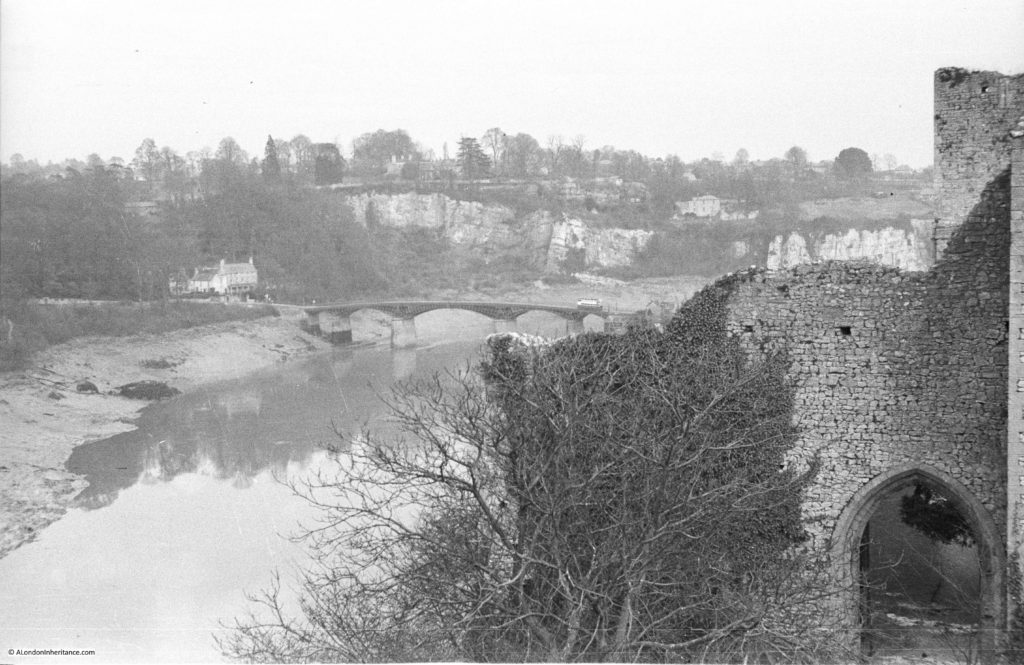 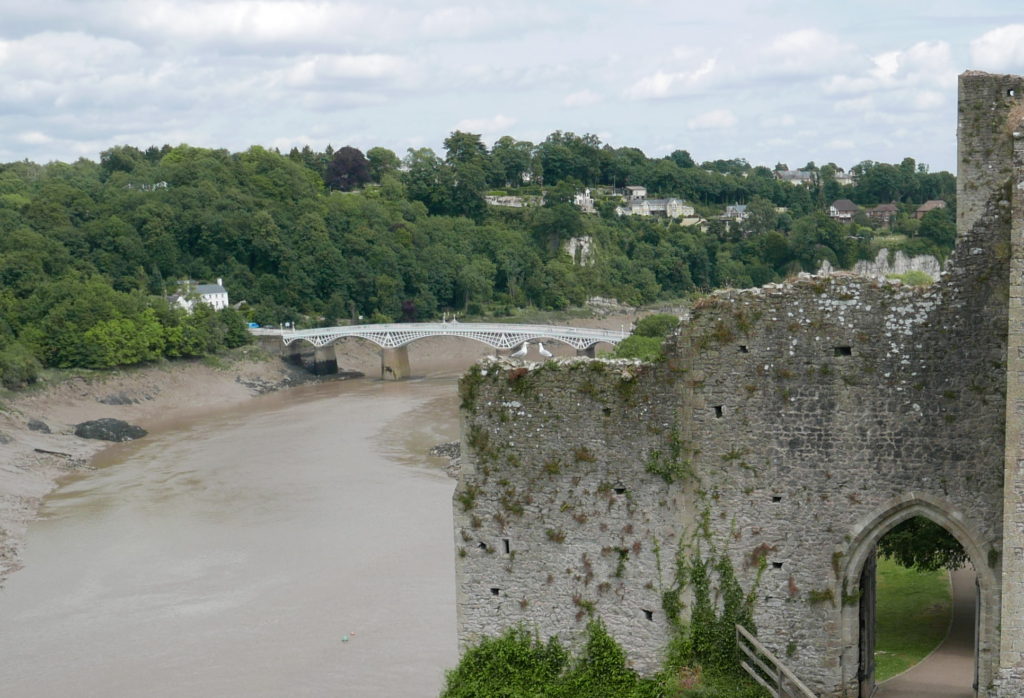 My father took these photos during his National Service when he was at an Army base just outside Chepstow, and he was at the castle with a number of his colleagues from the army – there are photos of them in and around Chepstow and the castle, including this one rather precariously sitting on the edge of the cliff lookiing back towards the castle. 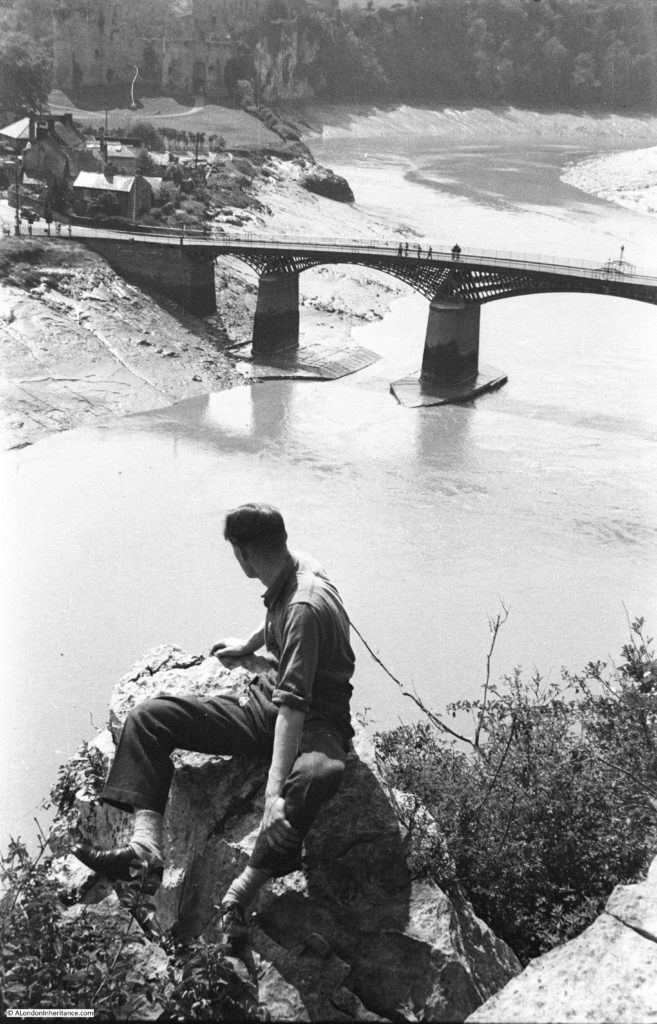 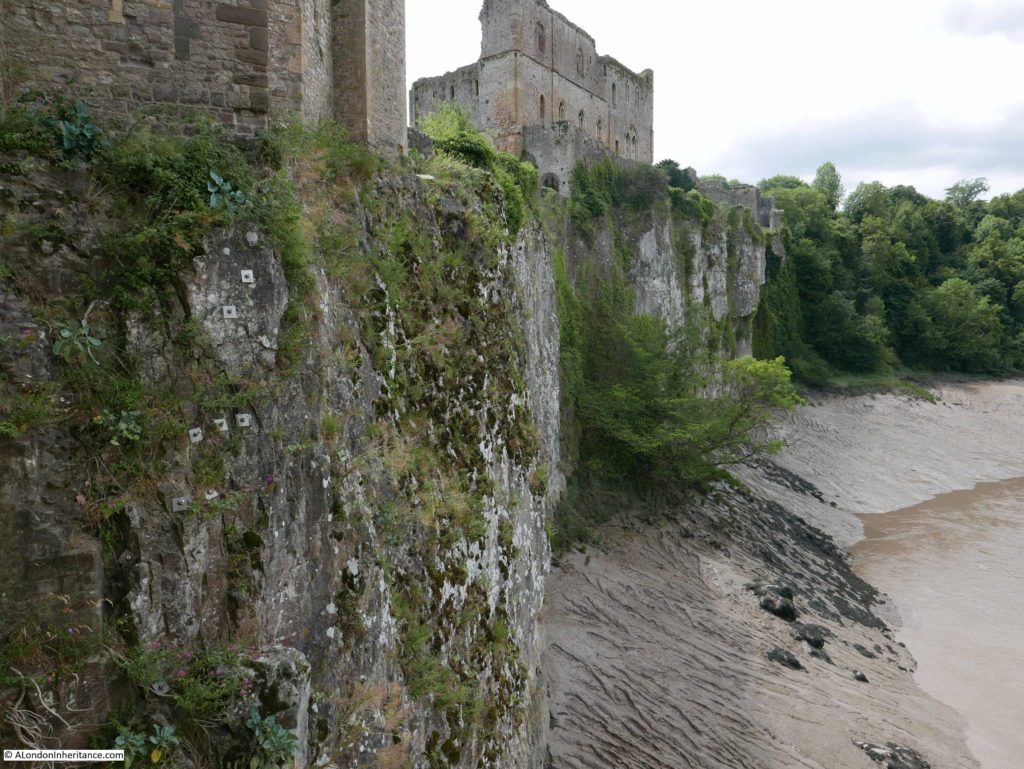 The setting of Chepstow Castle high on the cliffs over the river has attracted many artists over the centuries to paint and draw different views of the castle. The following painting by the Flemish artist Hendrik-Frans De Cort shows a rather overgrown and ruined castle. The bridge in the background is the version of the bridge prior to the existing bridge. 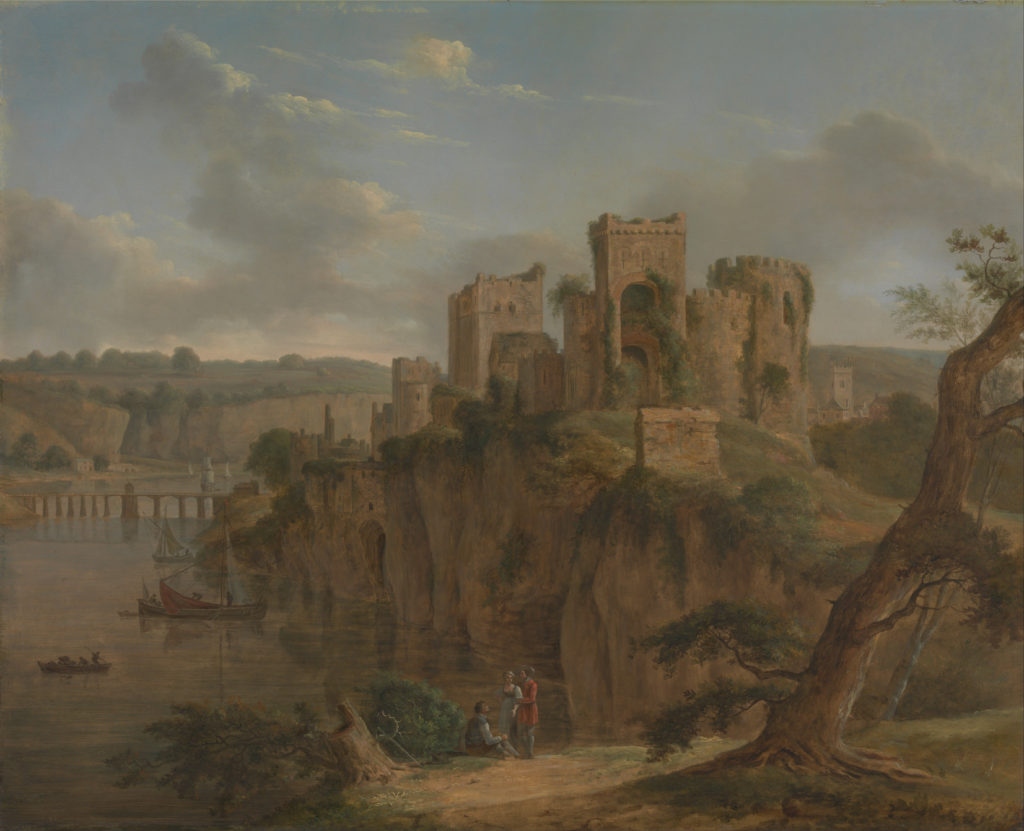 Cellars underneath the castle provided storage and also access to the river. The following 1947 view is of the large opening from the cellar overlooking the river. From this opening, goods could be winched up from boats on the river below. 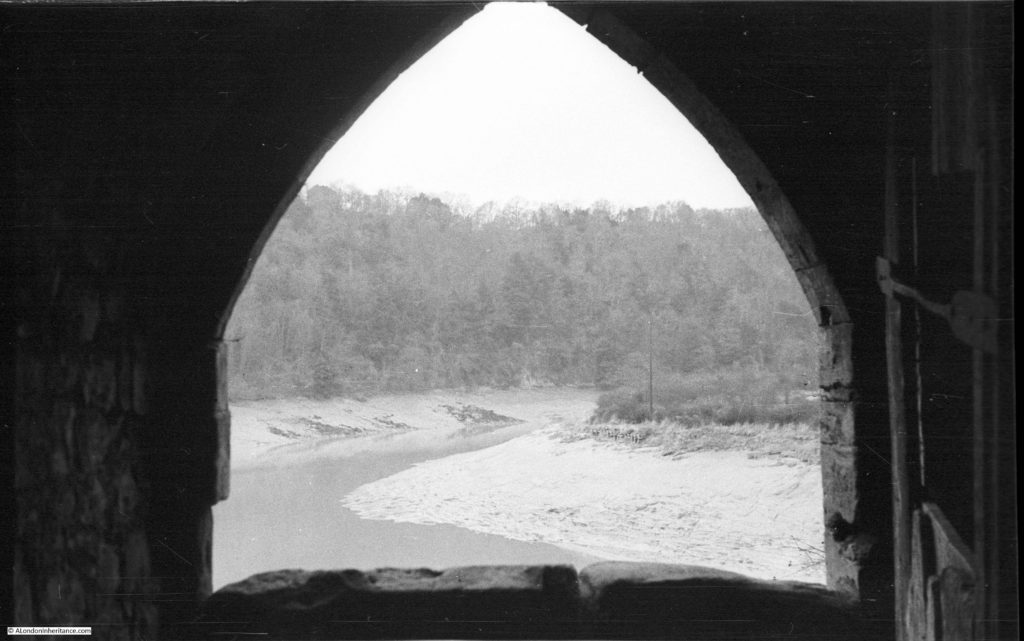 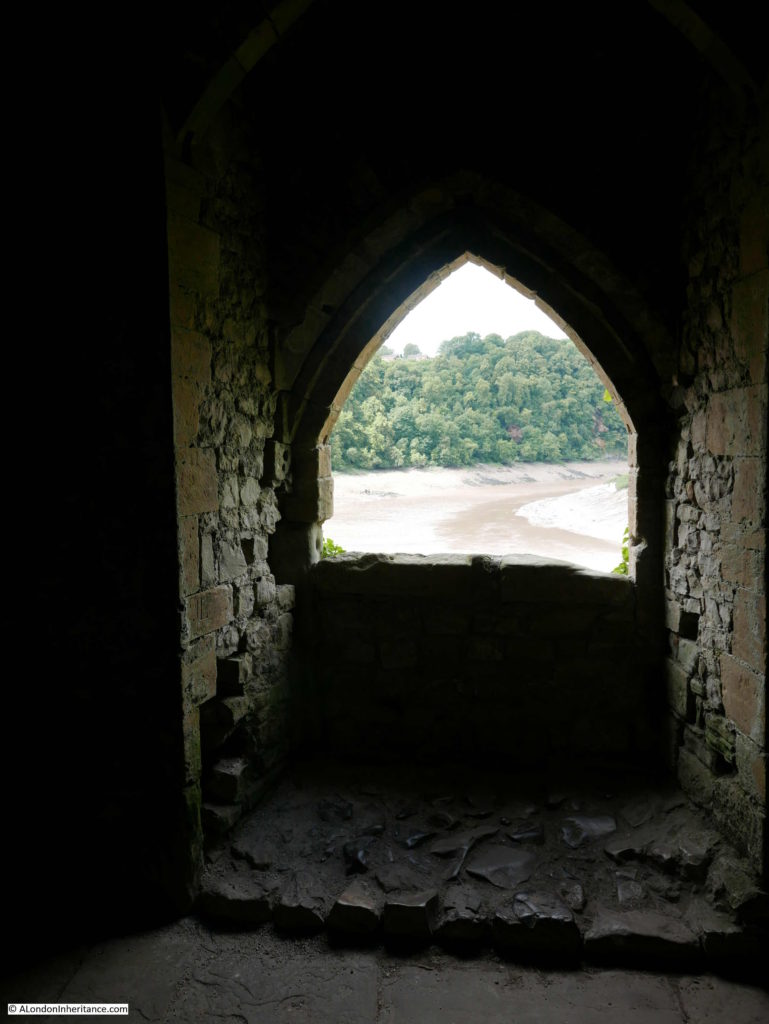 Chepstow Castle was further fortified in the early 15th century to prevent any attacks by Owain Glyndwr, the last Prince of Wales to be a native Welshman, and who led a number of revolts against the rule of Wales by the English.

In the 16th century the castle become more of a home than a castle and was modified for a more comfortable form of living, however it was during the English Civil War in the 17th century that the castle was to see considerable action.

During the Civil War, much of Monmouthshire and South Wales supported Charles I, and Chepstow was the main Royalist base in the area.

Parliament briefly gained control of the castle in 1643, but for the majority of the Civil War the castle remained loyal to the Royalist cause. In 1645 the castle was besieged and surrendered without waiting for a full attack.

In November 1647 whilst being held at Hampton Court Palace, Charles I briefly escaped. News of his escape triggered a number of Royalist rebellions across the country, including at Chepstow where Sir Nicholas Kemeys captured the castle in a surprise attack with 160 soldiers.

On May 11th 1648 Cromwell arrived in Chepstow and captured the town but not the castle. He left part of his army at the castle to commence a siege.

The siege lasted for two weeks, when Kemeys was offered terms for surrender which he refused until only unconditional surrender was offered.

Kemeys realised he could not continue to hold the castle and he arranged to escape by boat, however the boat was seen by Royalist soldiers who captured the boat before Kemeys could escape.

The Parliamentary forces then breached the walls of the castle, and in a last desperate fight, Kemeys was killed. Of his original force, only 40 survived and surrendered.

A plaque on the interior wall of Chepstow Castle records where Sir Nicholas Kemeys met his death. 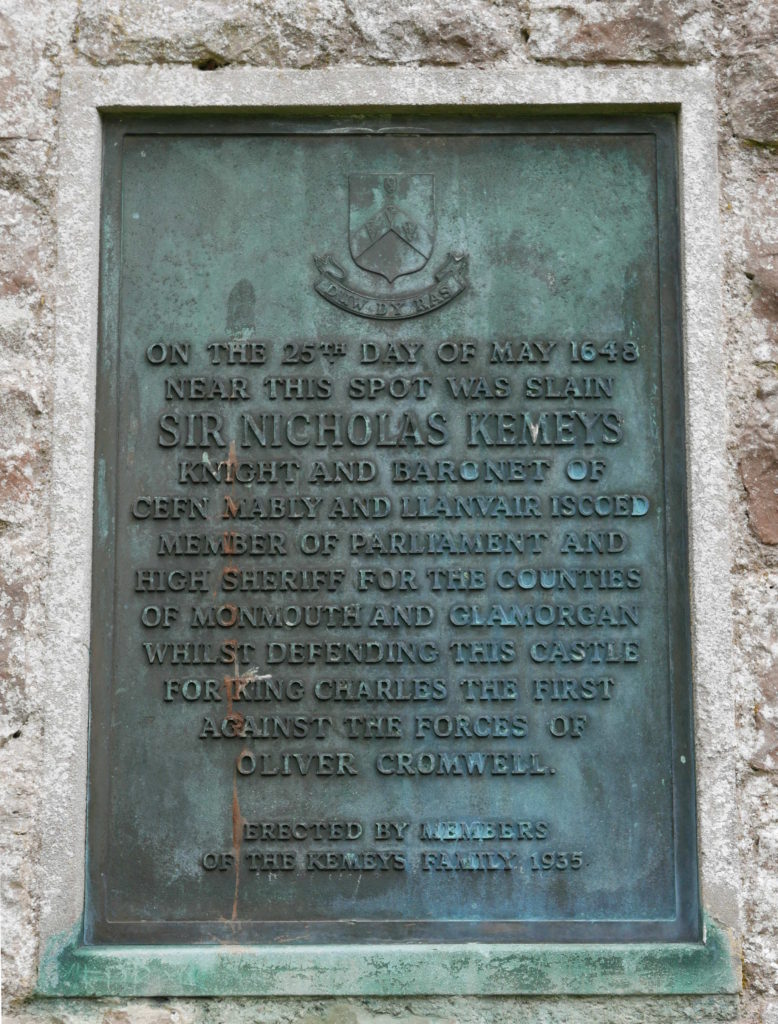 After the Civil War, Chepstow Castle entered a long period of peace and gradual decay as illustrated by this print from 1787 (©Trustees of the British Museum): 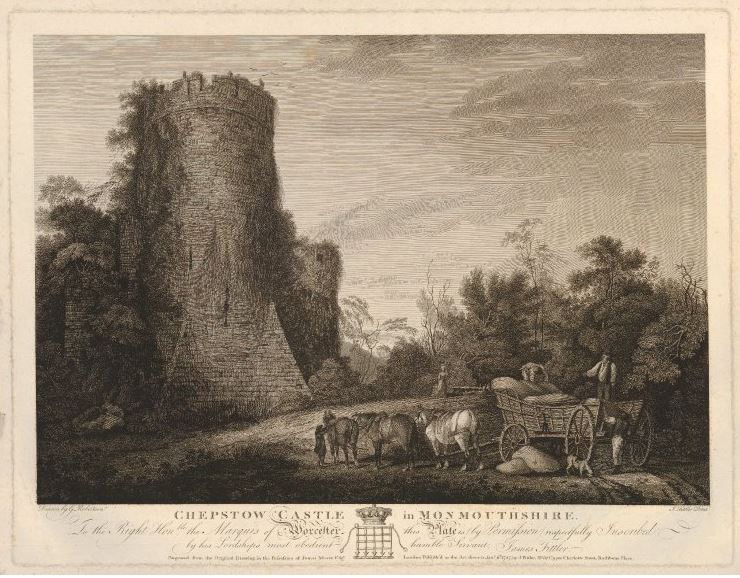 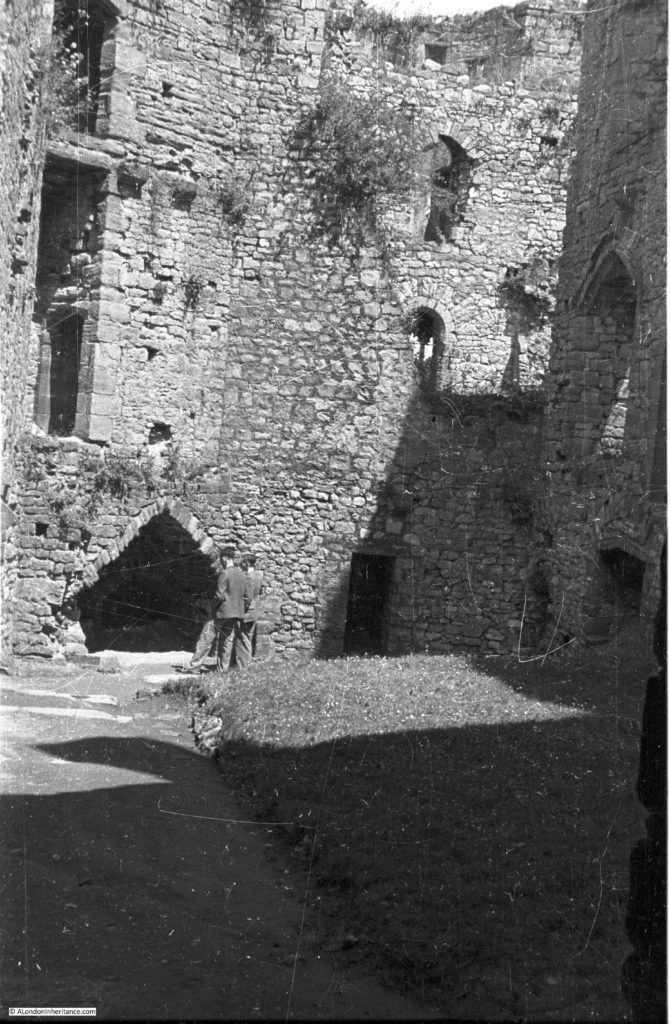 Along the top of the ramparts: 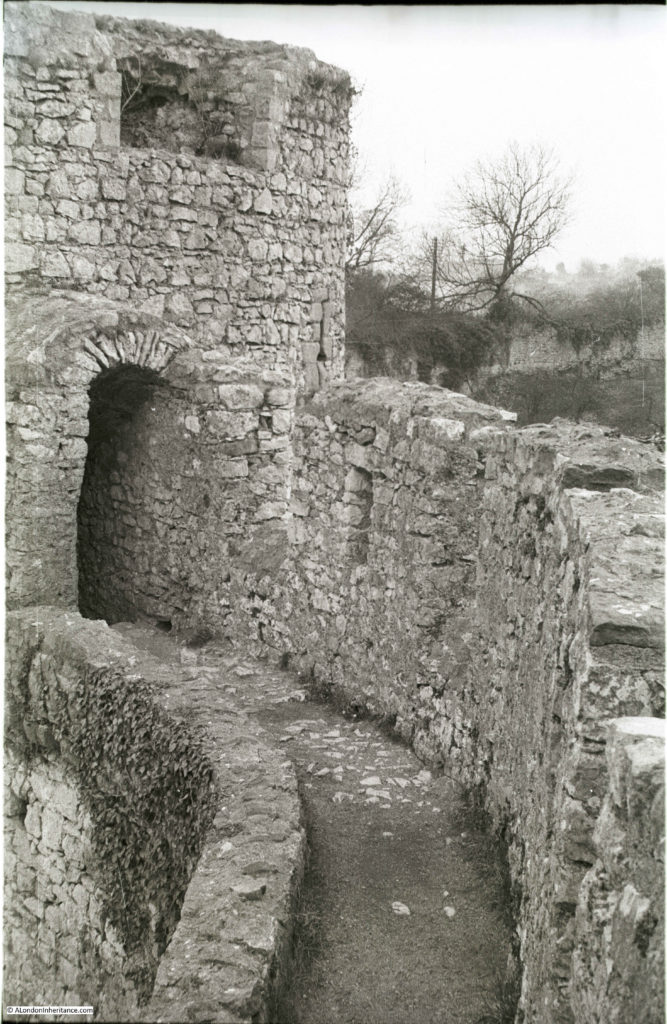 View across the castle to the cliffs on the opposite bank of the River Wye. In the bottom right hand corner is the Georgian Castle Terrace (see the photo in last week’s post of the street facing facades of these lovely buildings) 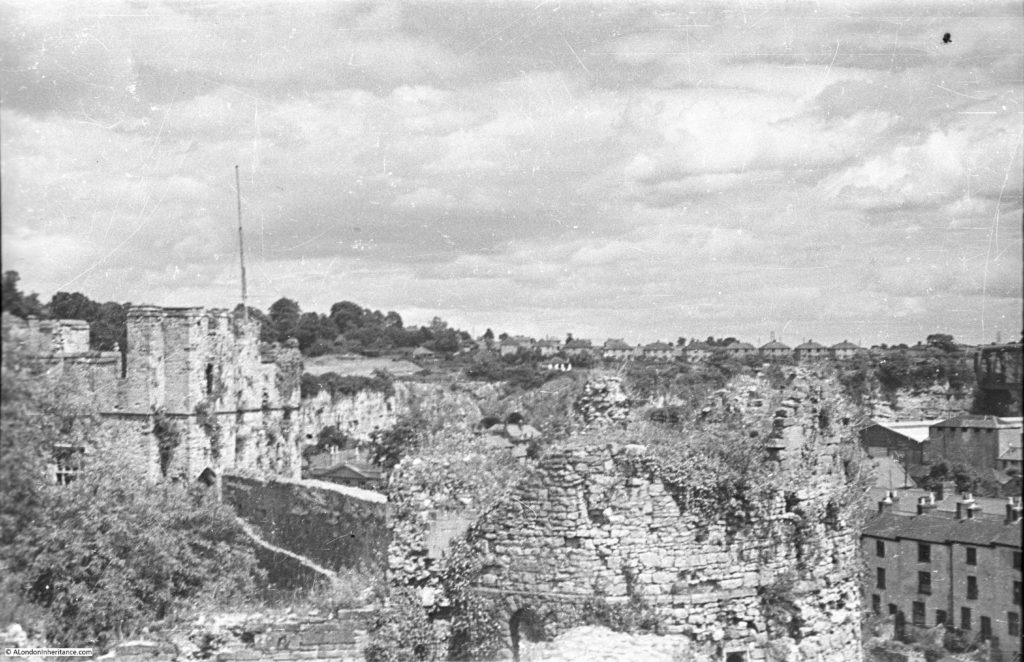 I could not find the exact location that the above photo and the following two photos were taken from, a task that should have been easy given the number of obvious landmarks, however I suspect the point where the above photo was taken is now closed off, and the following two photos may have been taken just outside of the castle on land that rises behind and now looks to be mainly wooded. 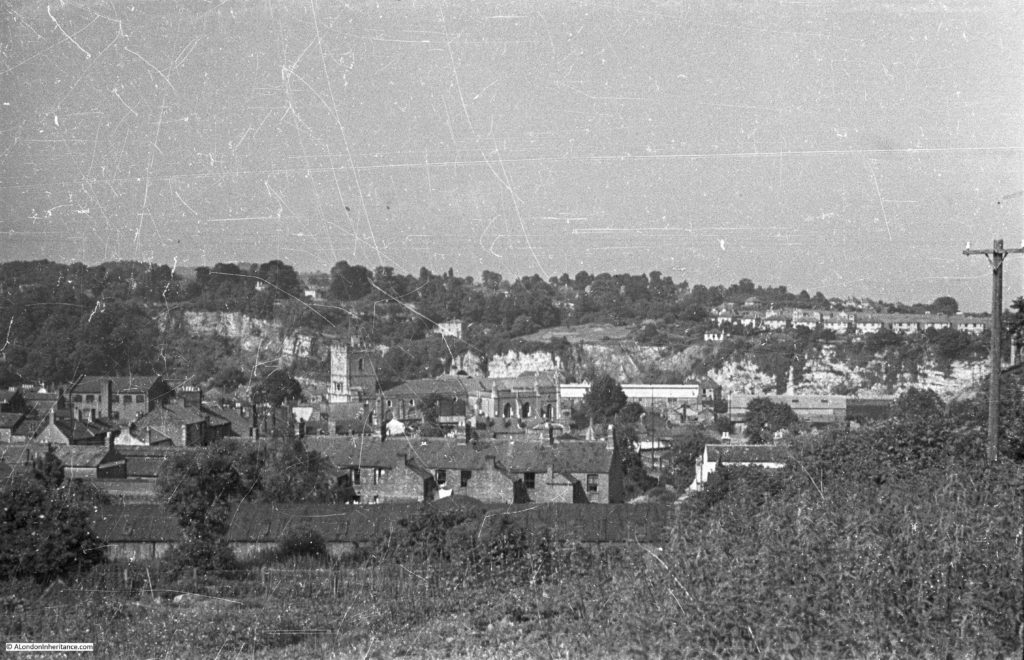 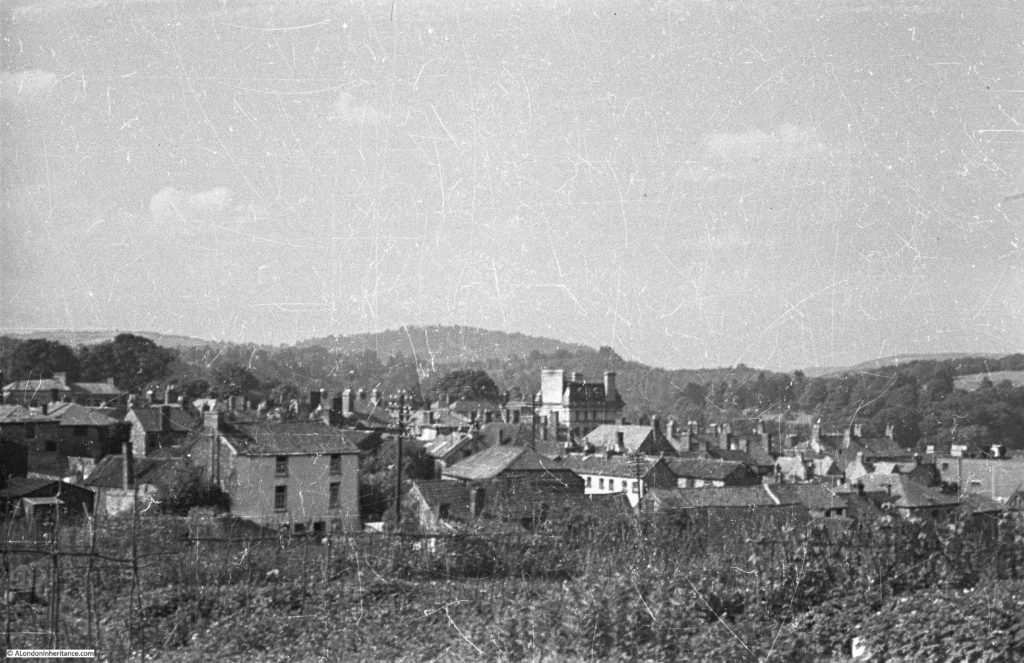 Back in Chepstow Castle, the following photo shows the remains of the Great Tower. It originally consisted of a two storey tower built between 1067 and 1115 making this the earliest stone structure in the castle. 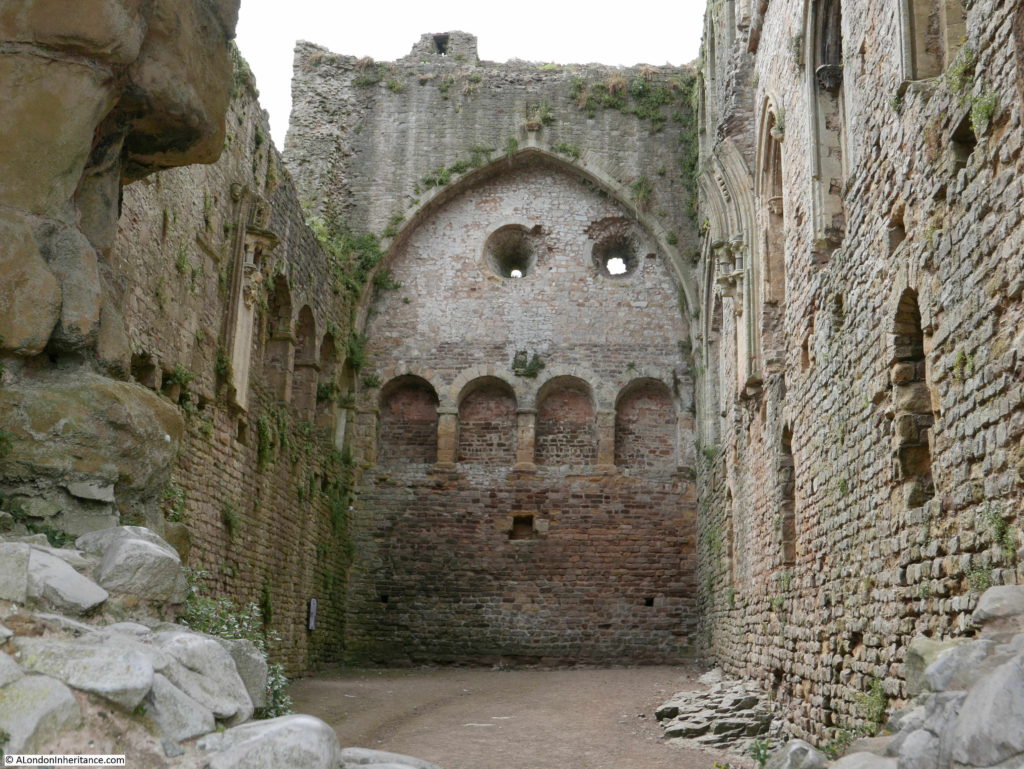 It was extended over the years and as the rest of the castle developed, the Great Tower moved from being a purely defensive structure to being ornate private apartments and ceremonial space. The photo below shows some of the decoration that remains within the Great Tower. In the centre there is the remains of a decorated arch. Part of a pair that crossed the width of the hall. 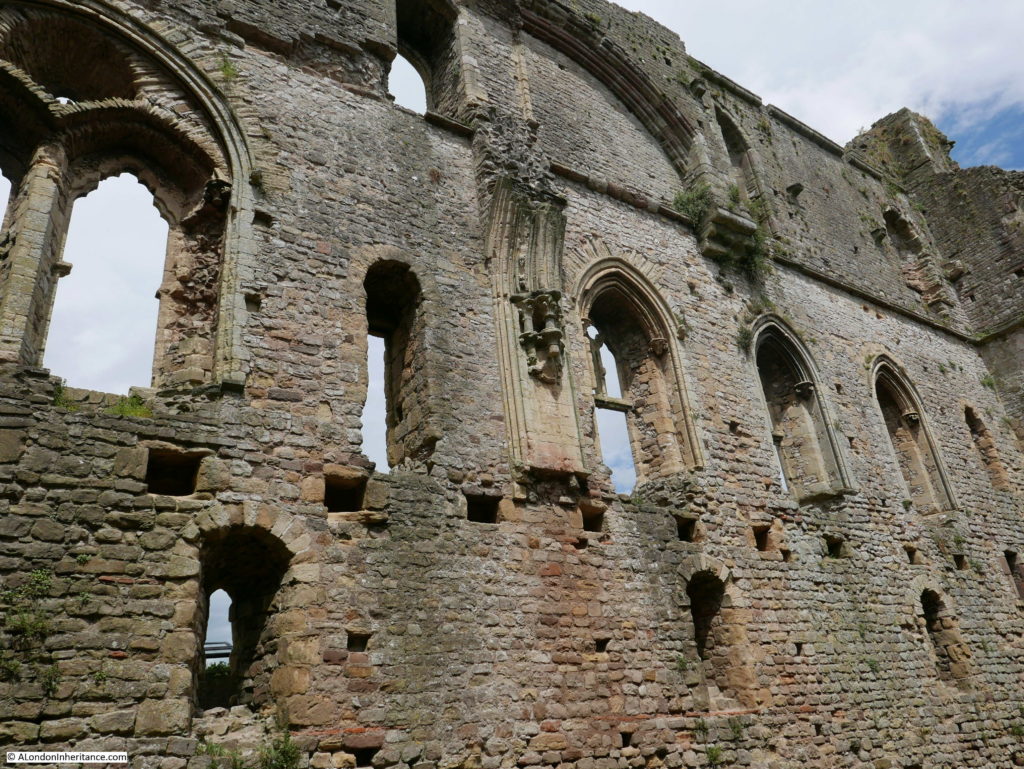 The ornate east doorway to the Great Tower is shown in the photo below. Note the layer of Roman tiles running along the wall and over the arch of the door. There is no evidence of a Roman building on the site of the castle, however there were Roman buildings nearby and the tiles probably came from one of these buildings. 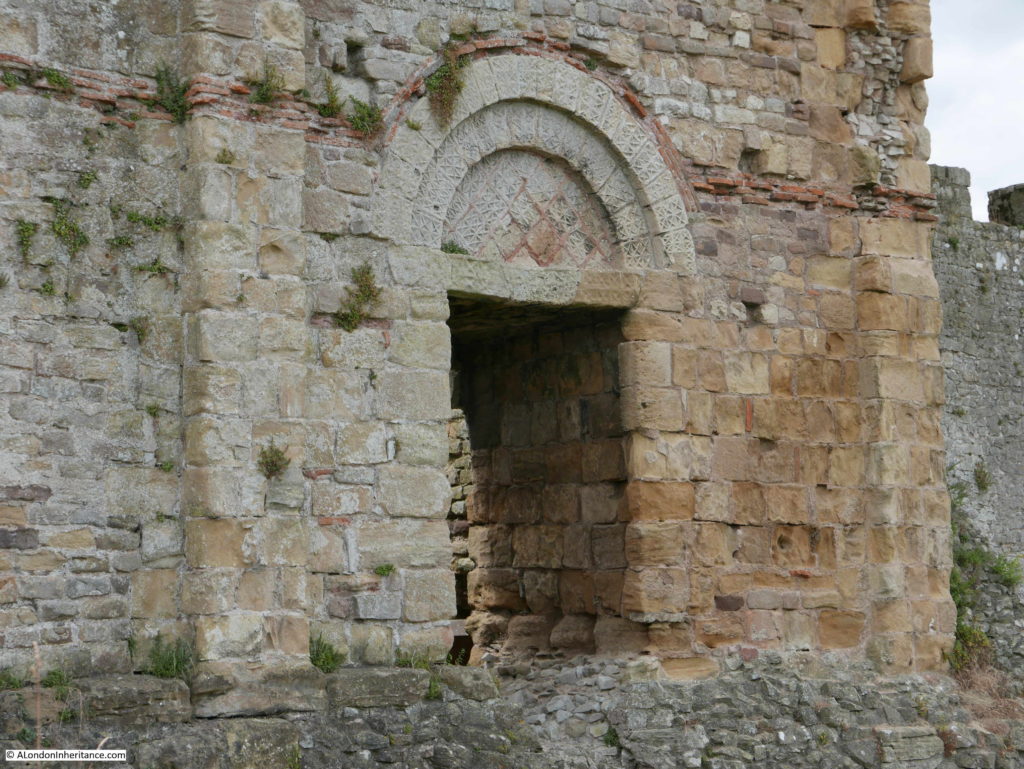 The interior of Marten’s Tower which was built between 1288 and 1293 by Roger Bigod. Possibly intended as a guest suite for a king, it contained grand private rooms on three floors along with a private chapel. 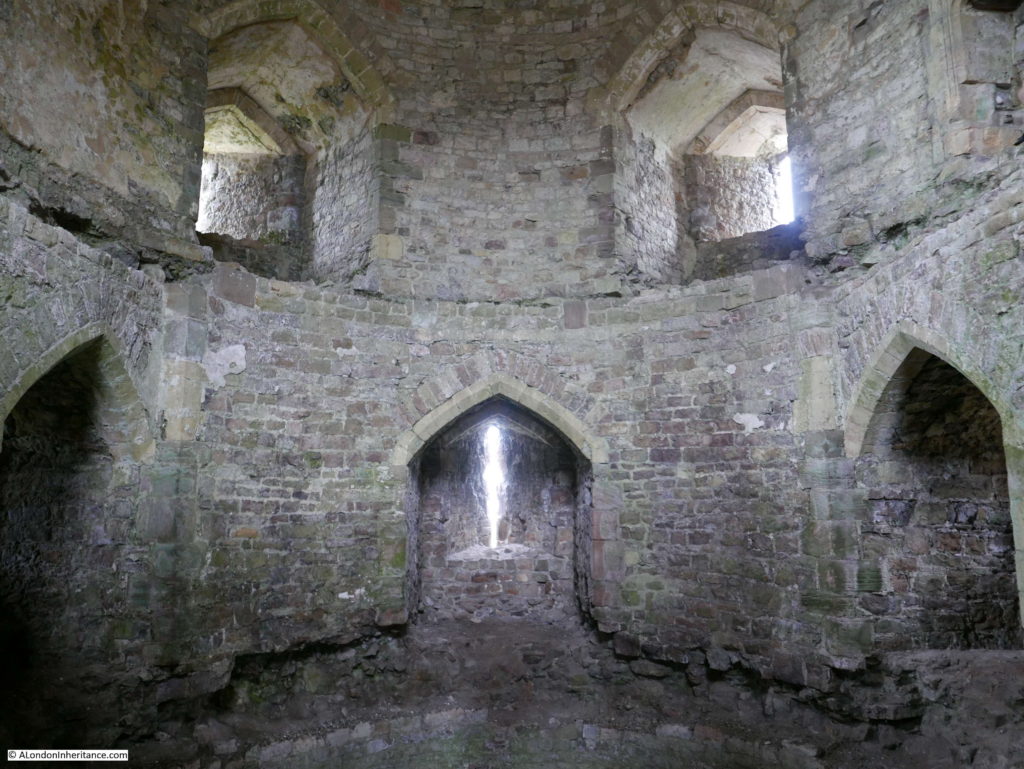 Recent tree ring dating tests have identified a gate that until 1962 still hung at the main castle gateway, as being the oldest castle doors in Europe. Tree ring dating identified the doors as having been made no later than the 1190s. Just image the people that have passed these doors and the events they have witnessed over the almost 800 years that they were in place. 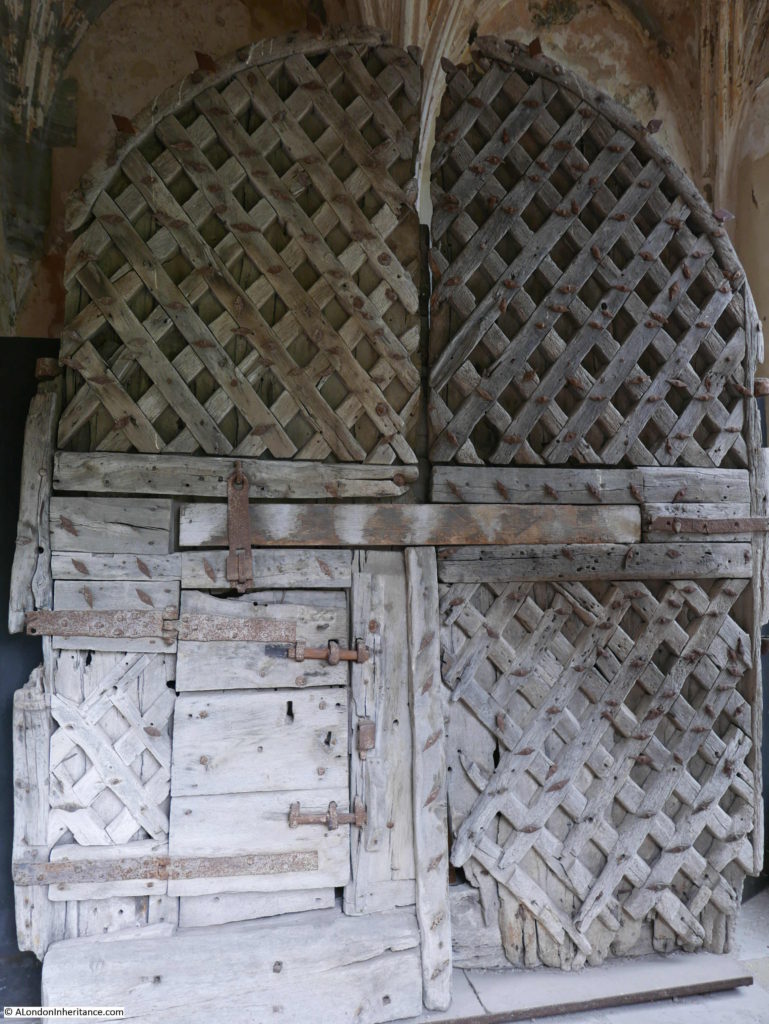 There are more photos from 1947 and 1948 taken in the areas around Chepstow so I hope to return one day and track these down, but I was really pleased that tracking down the locations of the photos in these two posts gave me a reason to visit Chepstow and discover a wonderful town that is really worth a visit.