On a Sunday morning in June 1949, my father photographed a solitary man walking along the middle of Thomas More Street. This is a street in the middle of the London Docks, as can be seen by the surrounding warehouses. 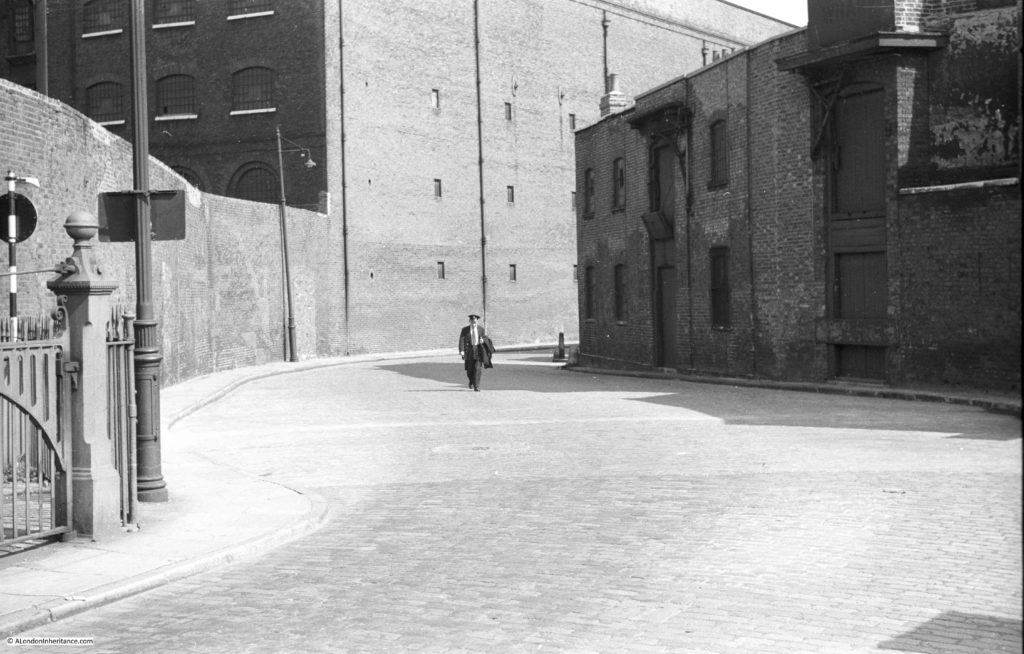 Fortunately, this photo is one of those that my father labelled, as without that guidance I would not have been able to find the location as there are no features to identify the exact street.

The man is in uniform. I have looked at the original high definition scan of the negative, but cannot see any details that would indicate his job. He is walking towards the river, he may be about to start work, or possibly walking home after ending a night shift. 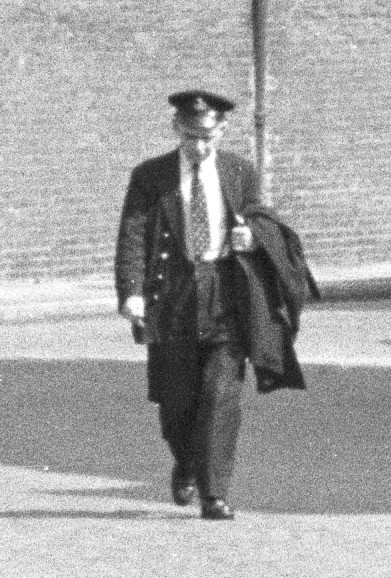 The badge on the hat would almost certainly indicate his role, but it is to indistinct on a 70 year old film negative.

Thomas More Street is to the immediate east of St Katherine Docks. The street runs from East Smithfield down to the junction with St Katherine’s Way and Wapping High Street.

The following map shows Thomas More Street running vertically down the map, just to the right of centre  (© OpenStreetMap contributors) : 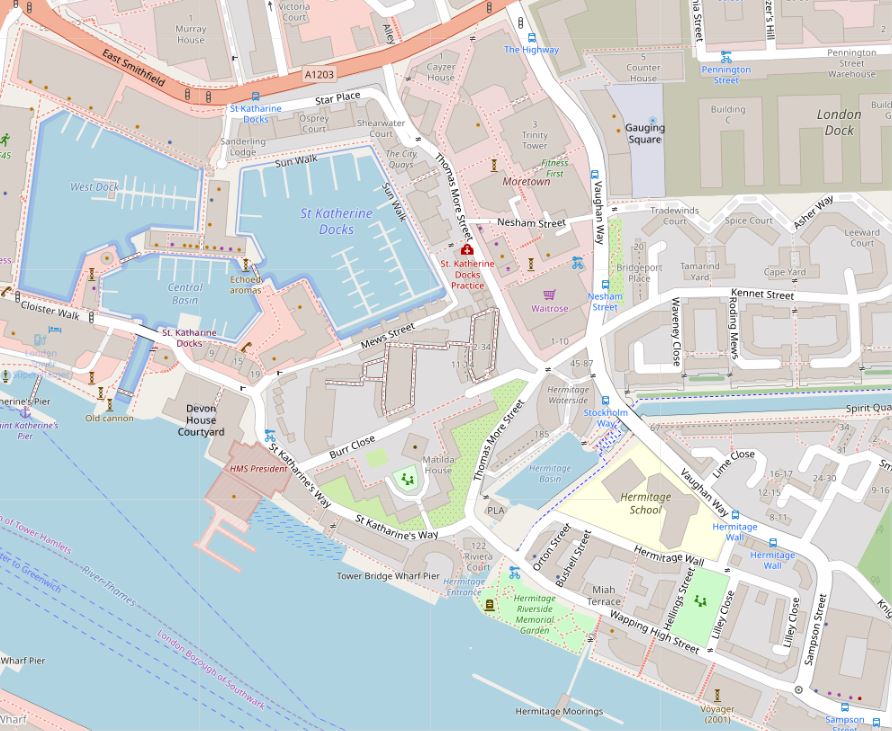 The name Thomas More Street is a relatively recent change, made at some point between 1895 and 1940 (it had the current name in the 1940 Bartholomew London Atlas). The street is named after Sir Thomas More, who was executed nearby on Tower Hill on the 6 July 1535. The original name was Nightingale Lane, a rather rural sounding name for a street in this location.

I cannot find any reference as to why the street name changed.

The following extract from the 1895 Ordnance Survey Map shows the street with the name Nightingale Lane: 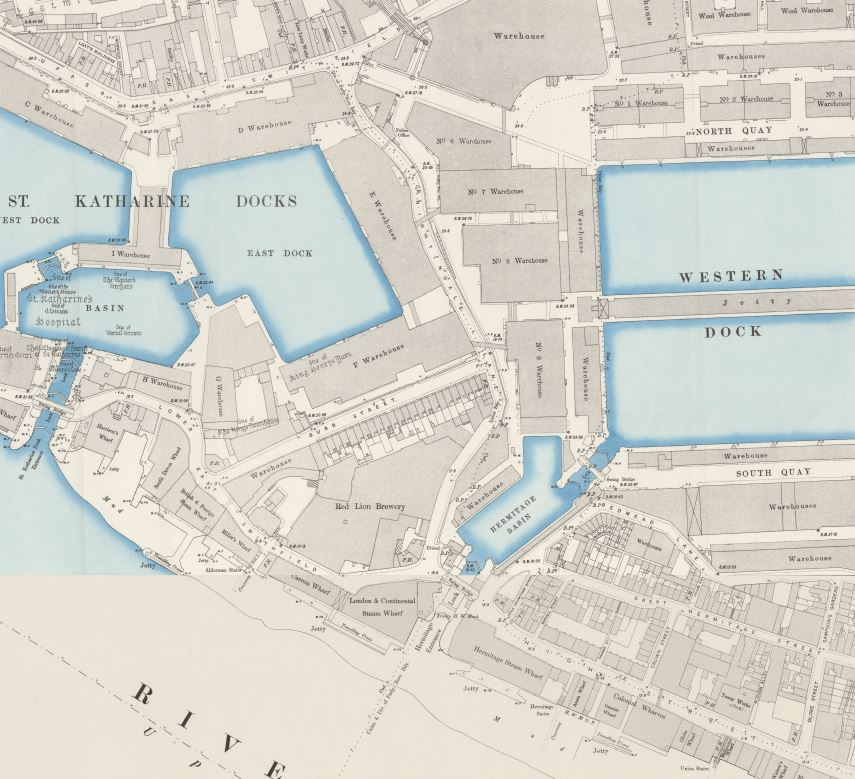 The name might imply a reference to the bird of the same name being heard in the distant past in this part of east London, however there is possibly a very old source of the name. Henry Harben’s Dictionary of London states that the earliest mention is by Stow in 1598 as Nightingale Lane. The street formed the eastern boundary of Portsoken Ward. Harben also quotes a publication by the London and Middlesex Archaeological Society on the Anglo Saxon settlement around London, where there is a suggestion that the name may be a corrupted survival of Knightengild.

This source of the name is also mentioned in “The Streets of London” by Gertrude Burford Rawlings  which states: “Nightingale Lane E.1. A corruption of Cnihtena Guild or Knightenguild. This was an ancient London Guild established, as some think, in the time of King Edgar. In the reign of Henry I it was merged in the Priory of Holy Trinity, then newly founded at Aldgate. Its ‘soke’ is represented today by Portsoken ward.”

The 1895 map shows how the street ran between two large docks, St Katherine Docks to the west and London Docks to the east. The map also shows the street lined by warehouses serving the two docks, which is confirmed by my father’s photo as being much the same in 1949.

In John Rocque’s map from 1746, the street (just to the right of centre of the map below) is called Nightingal Lane. The ‘E’ on the end is missing. Assuming this is not just an error in the map, it does add credibility to the origin of the name referenced by Harben and Rawlings. 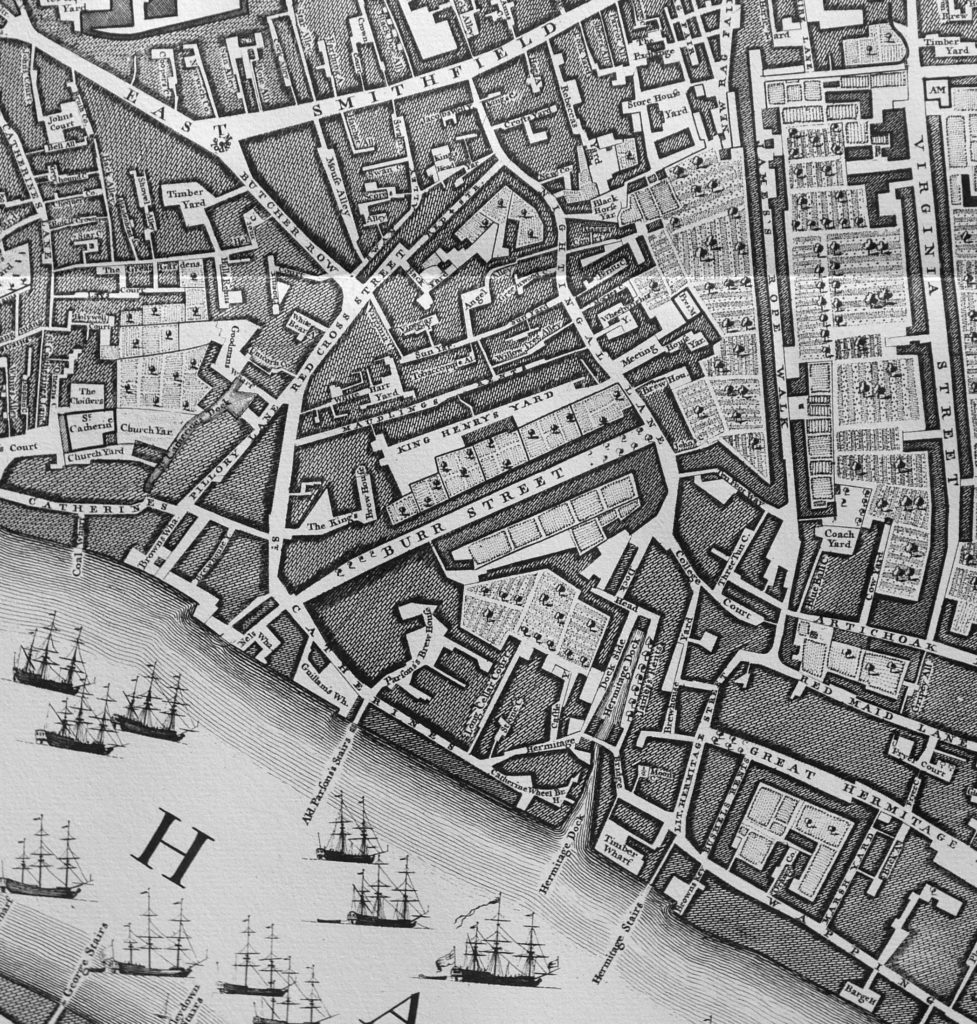 Rocque’s map shows how much this area would change with nearly everything in 1746 obliterated by the St Katherine and London Docks and their associated infrastructure, but Nightingal(e) Lane survives today at Thomas More Street.

I tried to find the location of my father’s photo, but whilst many of the old dock walls remain, the warehouses have long since disappeared, and I suspect entrances through the walls have changed to accommodate the recent building.

Starting at the junction of Thomas More Street with East Smithfield, this is the original entrance to the Western Dock of the London Docks. The 1895 OS map shows this well. 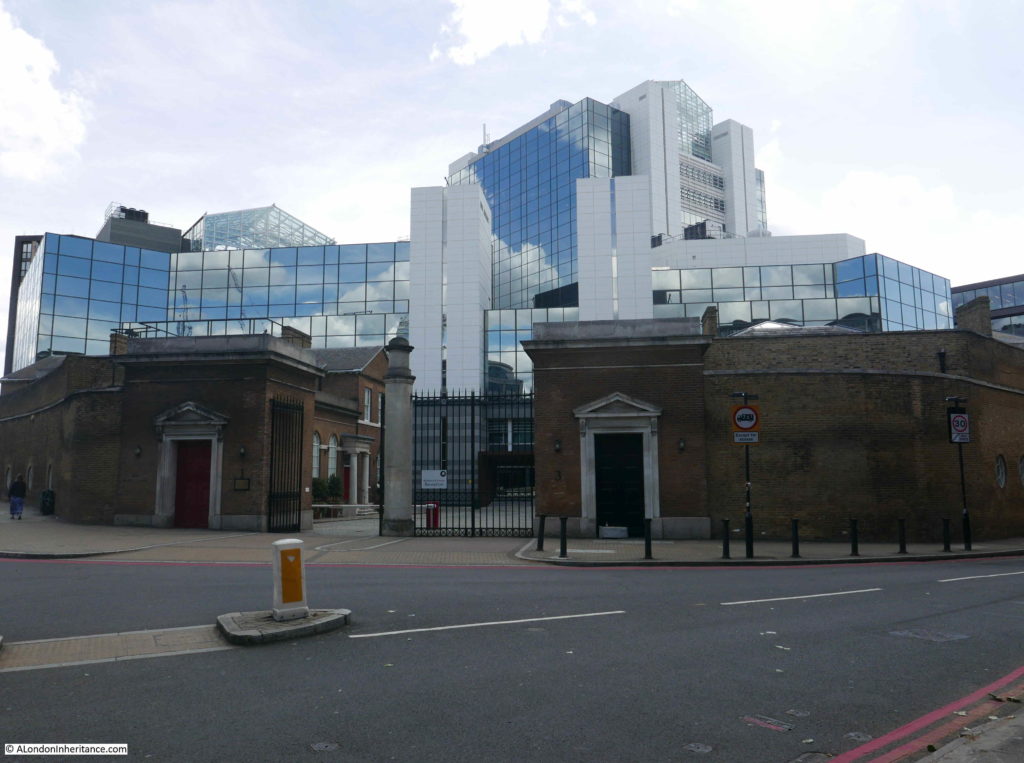 The view looking south along Thomas More Street from the junction. The high brick walls remain and give a good impression of how tall and solid these walls were. Theft from the docks and their warehouses was always a major problem and the dock owners built these walls to surround their docks to try to manage access through a limited number of controlled entrances. 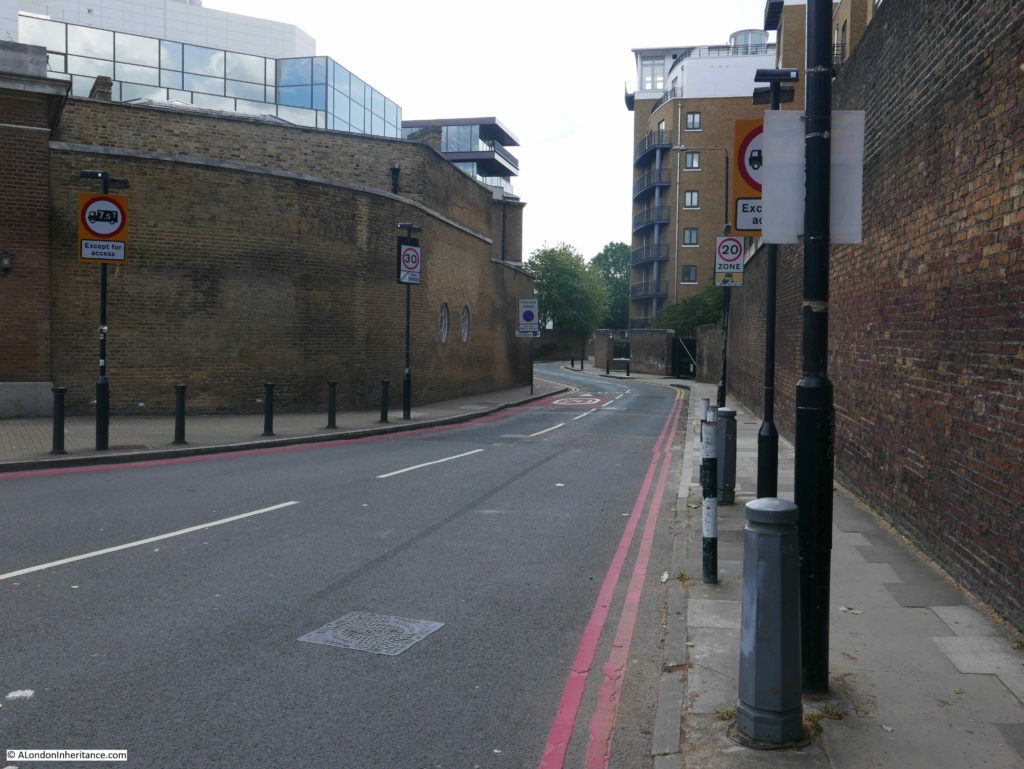 A couple of lengths of Thomas More Street did have the S shaped curve shown in my father’s photo, but I could not match up the walls at any of the locations. 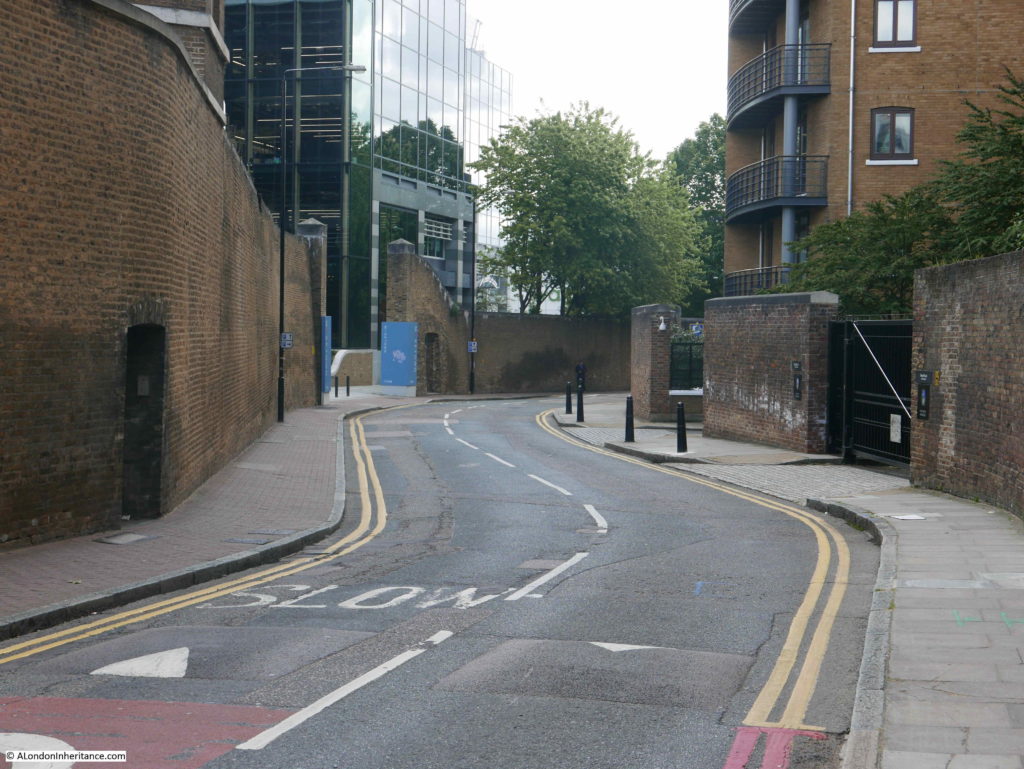 There has been considerable building over the area once occupied by the warehouses that lined Thomas More Street, alongside the London Docks. 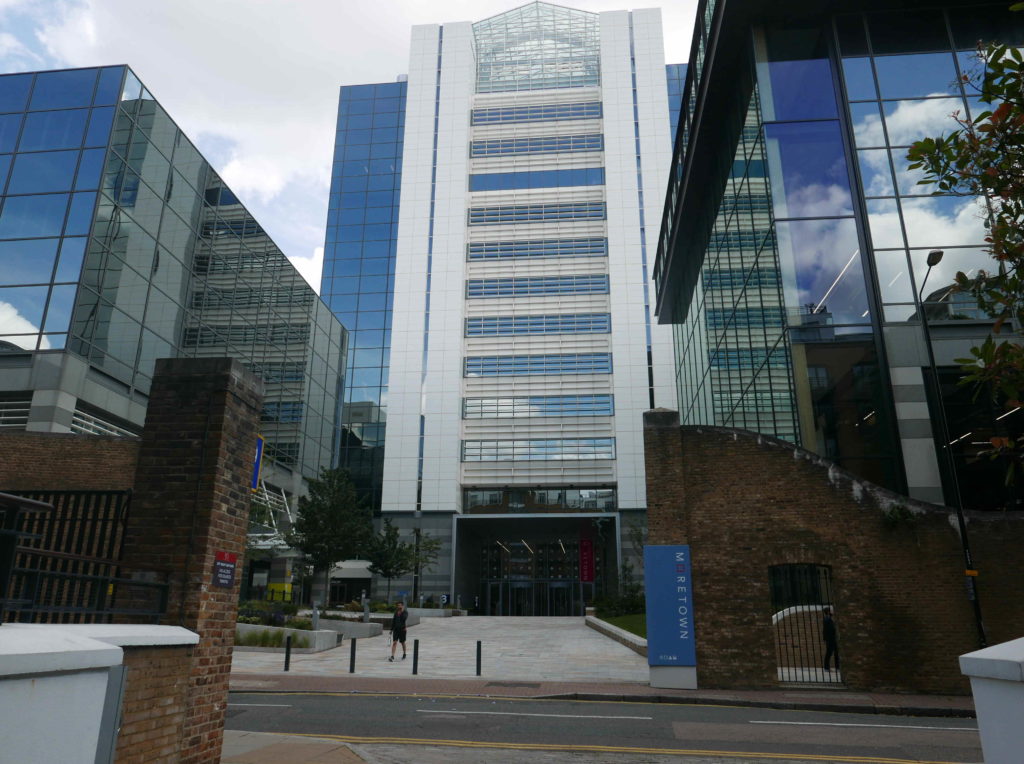 The different brick colours in the walls around the entrance show some probable rebuilding, so it is not always clear whether the entrances we see today are original, or later changes to the wall.

The development alongside Thomas More Street is named Moretown – an example of a trend seen across many parts of London where new names are given to an area to try to build a new identity – or in developer speak ‘place making’. 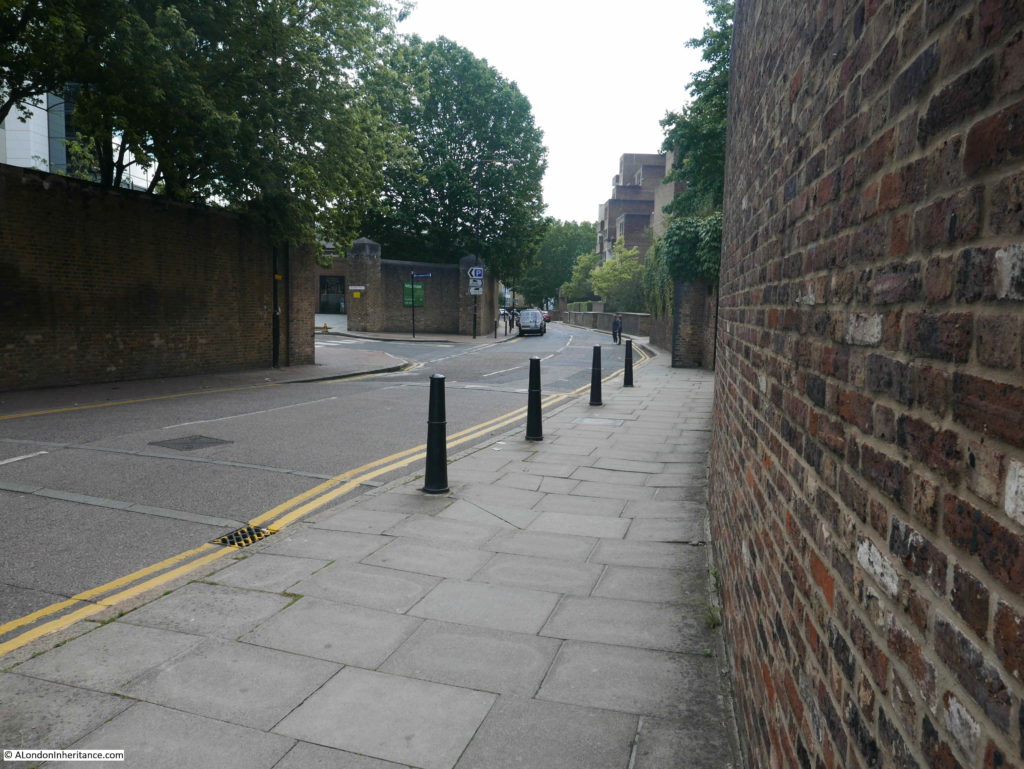 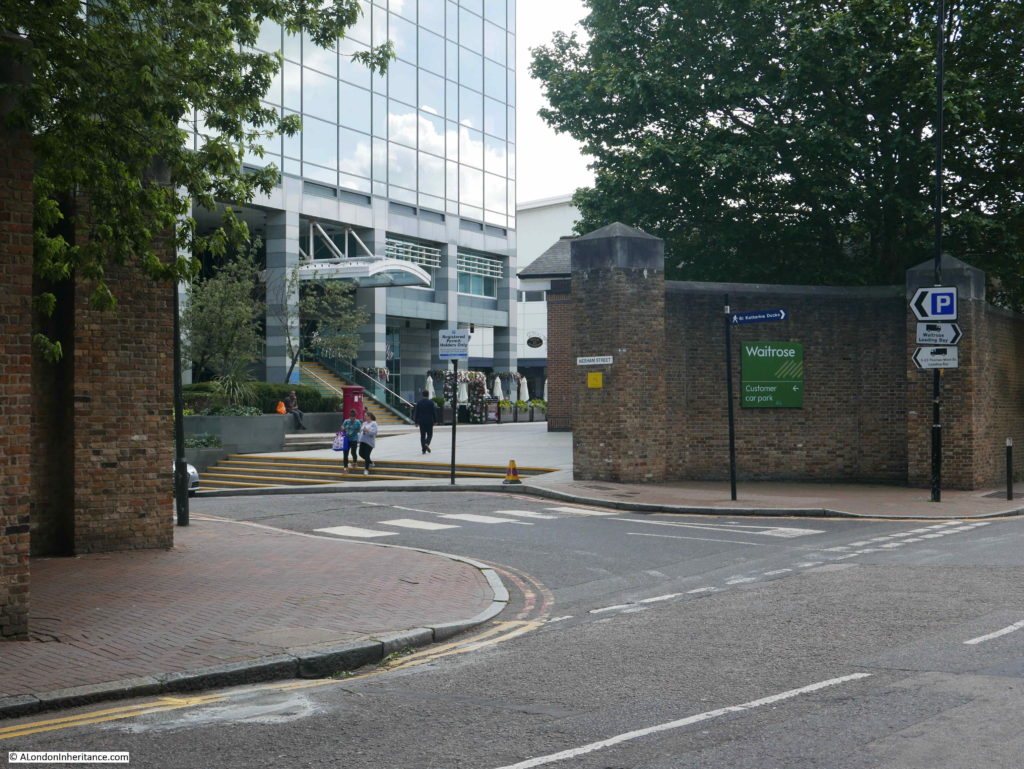 Looking back up Thomas More Street, the curve is going in the wrong direction to my father’s photo. 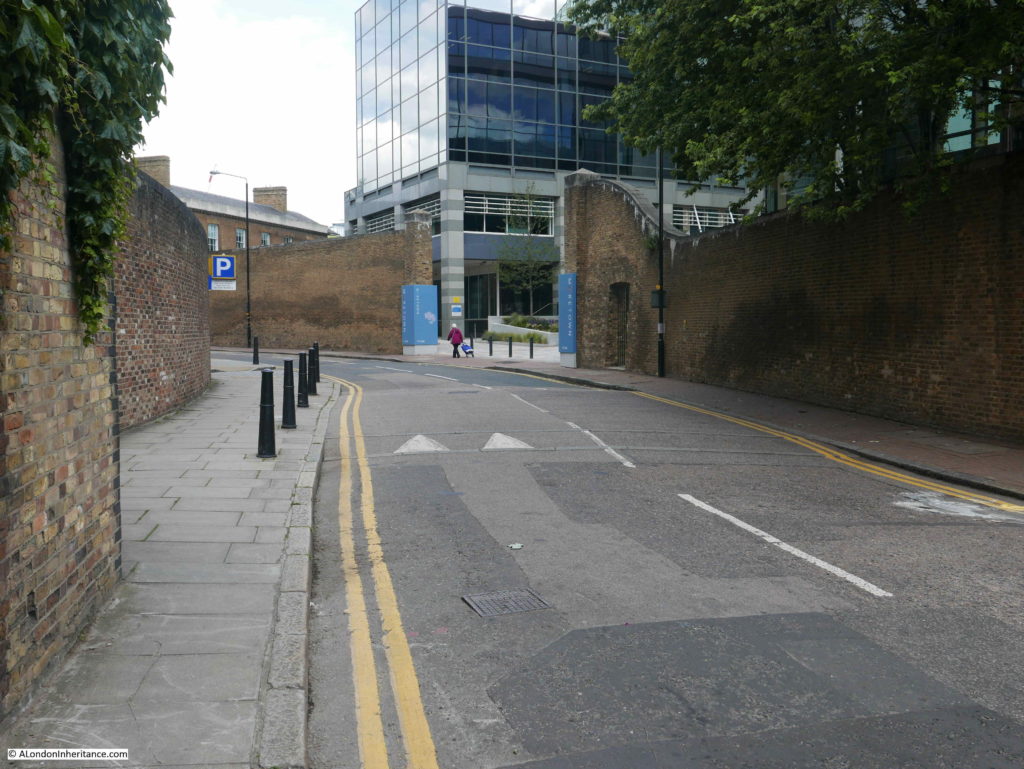 The buildings between Thomas More Street and the site of the London Docks are of steel and glass, whilst those between the street and St Katherine Docks are of brick. A couple of gaps in the building on the western edge of the street show the docks behind. 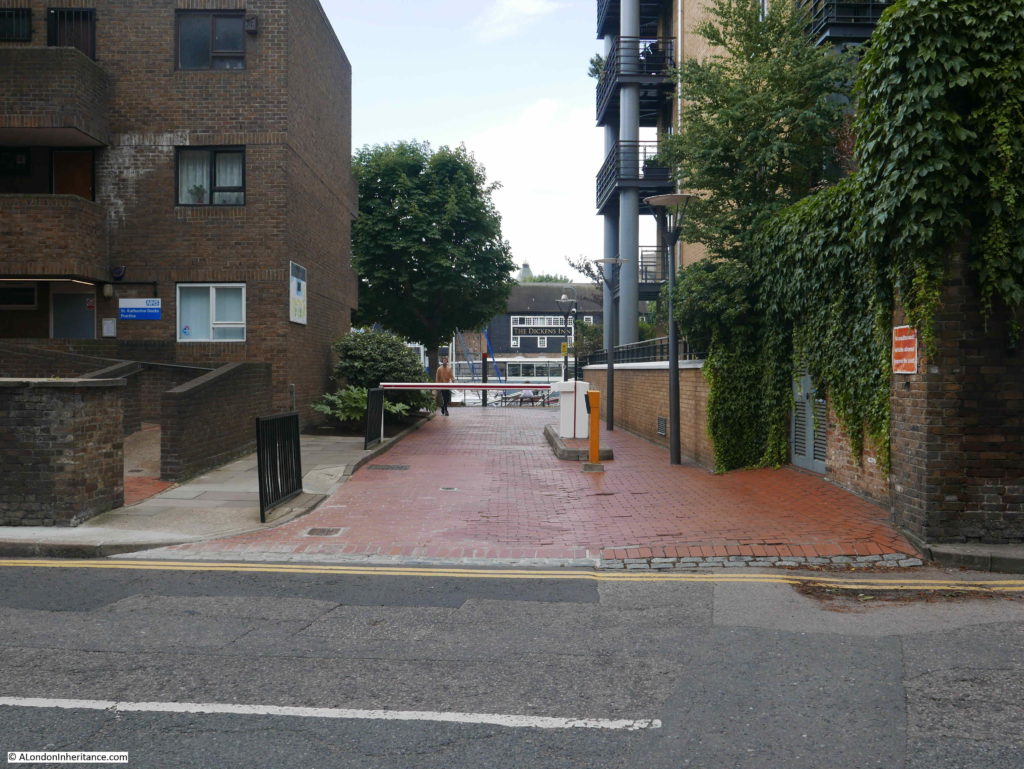 A Waitrose now serves the residents of the area, showing how much the area has changed. 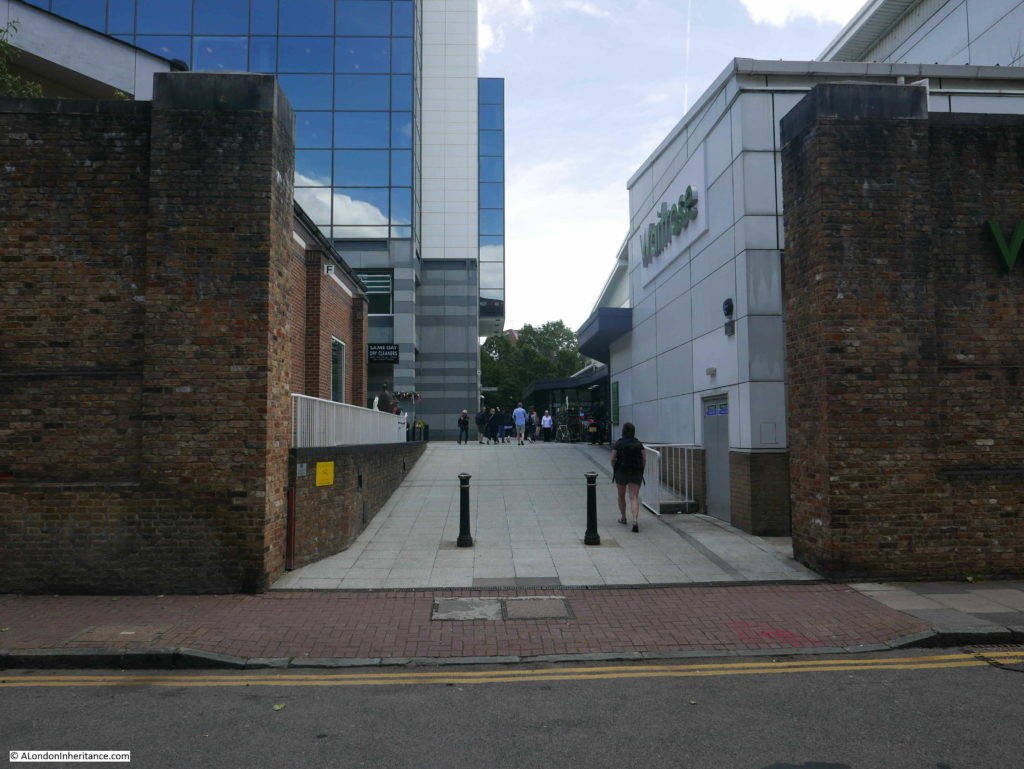 Looking back along Thomas More Street showing the height of the walls. 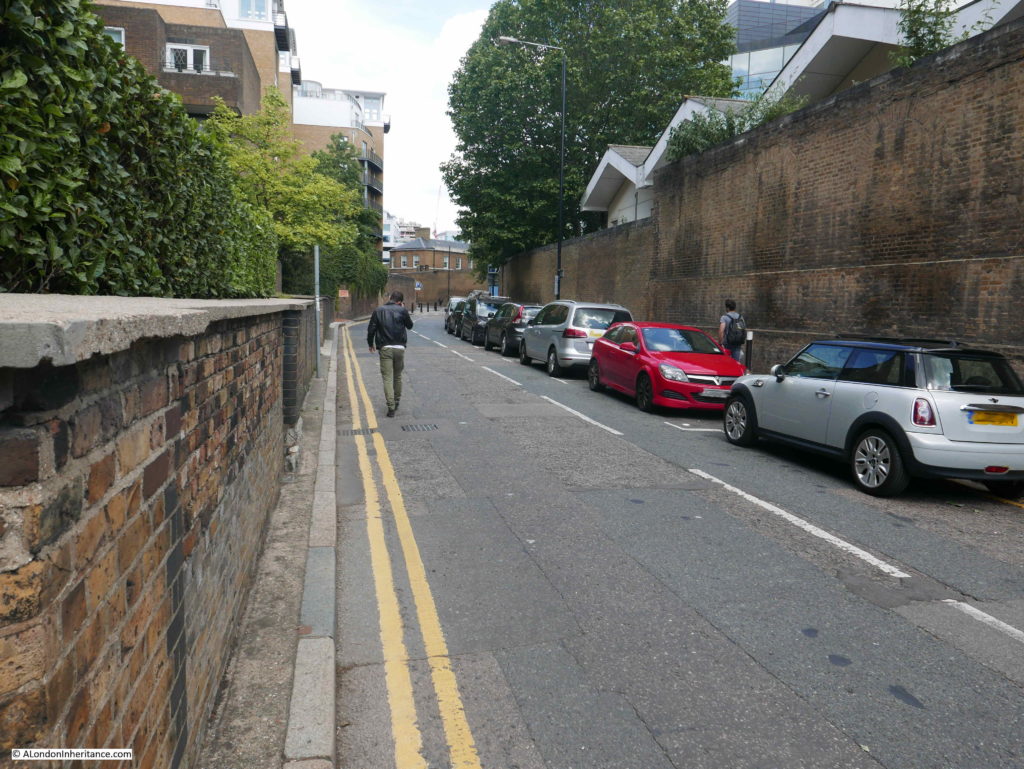 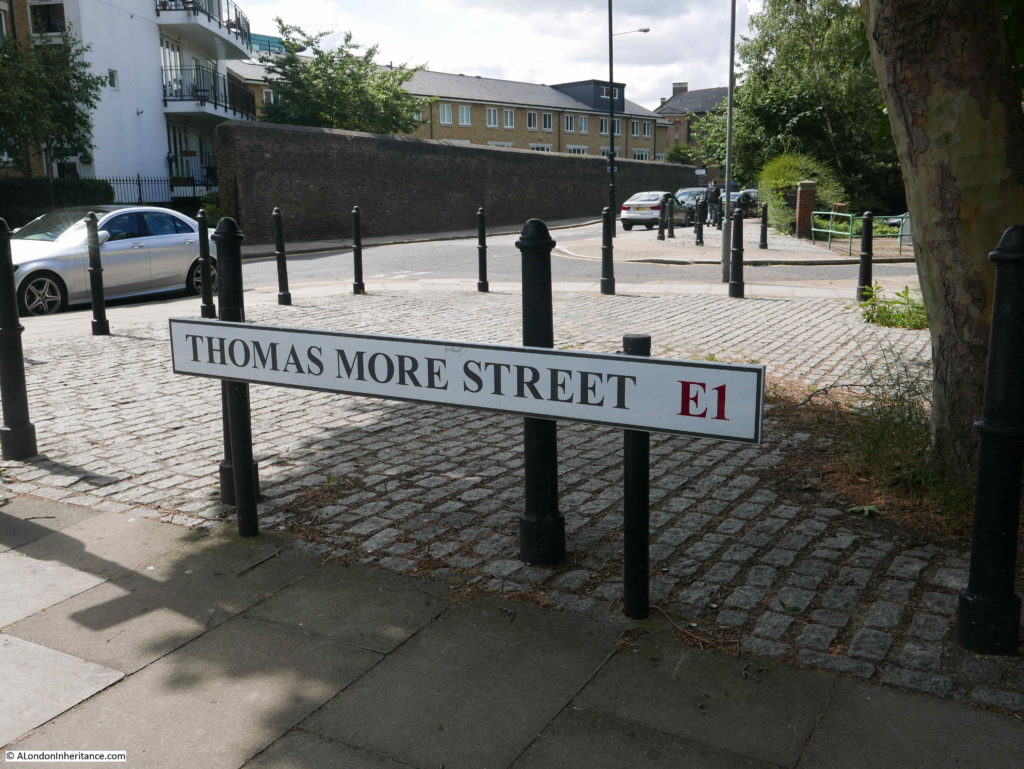 This makes sense when looking at the 1895 OS map as Stockholm Way did not exist when the area it now runs through was covered by the London Docks.

The following photo is looking back along Thomas More Street, at the southern end of the street at the junction with St Katherine Way. On the right is an entrance to Hermitage Basin shown on the 1895 OS map. 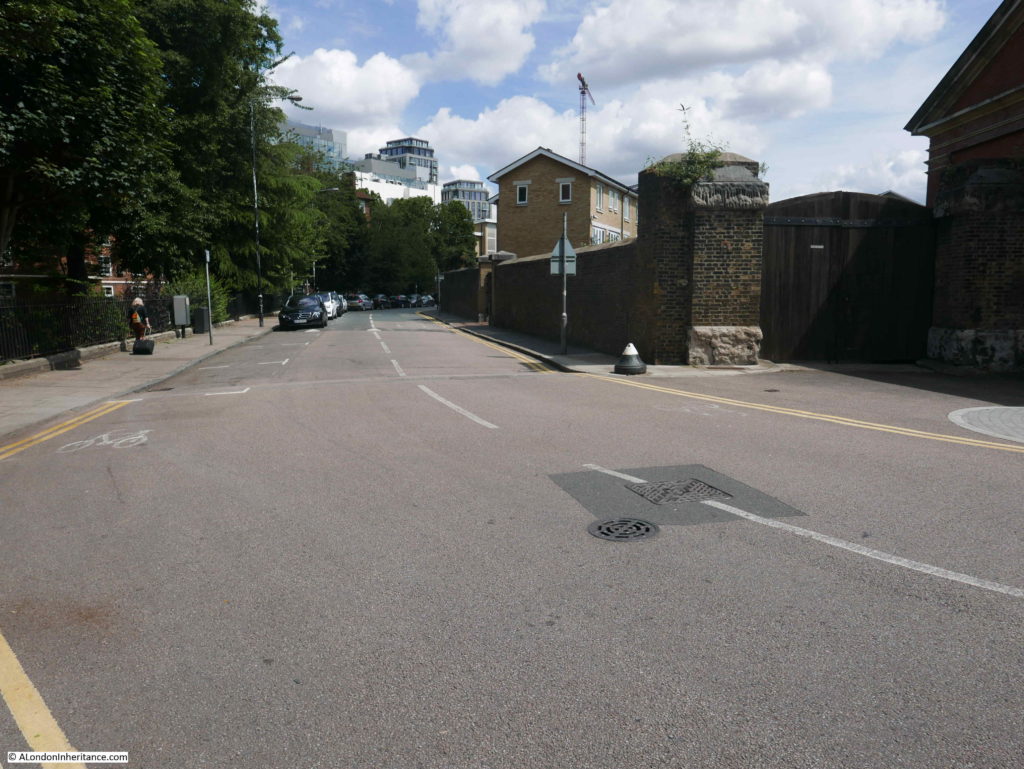 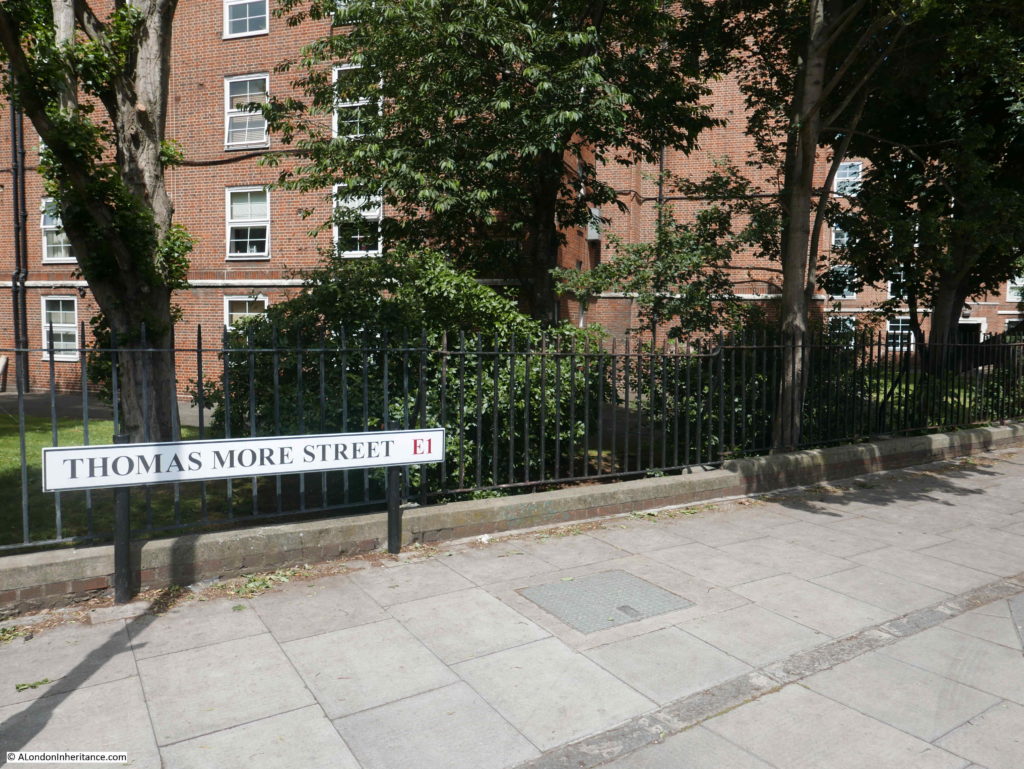 If you look at the 1895 OS map, to the west of the southern end of Thomas More Street was the Red Lion Brewery.

This was owned by the brewers Hoare & Co. but had a very long history as a brewery, possibly dating back to the 15th century. Sir John Parson’s (who gave his name to Alderman’s stairs, see last week’s post) had a brew house here in 1746 as shown in the extract from John Rocque’s map.

The brewery was closed in 1934. The end of the business was widely reported as the end of an industry that had been in operation on the site for over 500 years.

The West London Observer reported on the 15th June 1934:

“The ‘King’s Brew House’ is about to be closed after being used continuously for brewing throughout the last 500 years. The brew house is part of the buildings which form part of the Red Lion brewery, the oldest, and probably the third largest brewery in London. The whole of these buildings will be closed on June 23rd.

The ‘King’s brew house’ is so called because it supplied the beer for the English and French courts in the 17th and 18th centuries, it is believed to be the only brew house in Britain to have had a monopoly on the beer supply to the old French courts. The privilege was obtained in a romantic way by Humphrey Parsons, an 18th century brewer, who was twice Lord Mayor of London, and the manufacturer of the liquor christened by Oliver Goldsmith ‘black champagne’.

Parsons was hunting near Paris with Louis XV, and being well-mounted outstripped the rest of the party and was first in at the death. This was contrary to Court etiquette, and when the King asked the name of the hard riding stranger, he was indignantly told that he was ‘un chavalier de malte’.

The King summoned Parsons and asked the price of his horse. He replied that the horse was beyond any price other than his Majesty’s acceptance.

The horse was delivered to the King and from that time, the ‘Chevalier’ Parsons had the exclusive right to supply the French court with beer.”

There is no sign of the brewery today, after being in operation for 500 years and supplying the English and French Courts with beer.

The St Katherine’s Estate was built on the location of the brewery, and the estate now occupies the land between Thomas More Street and St Katherine’s Way, across the road from Alderman Stairs. 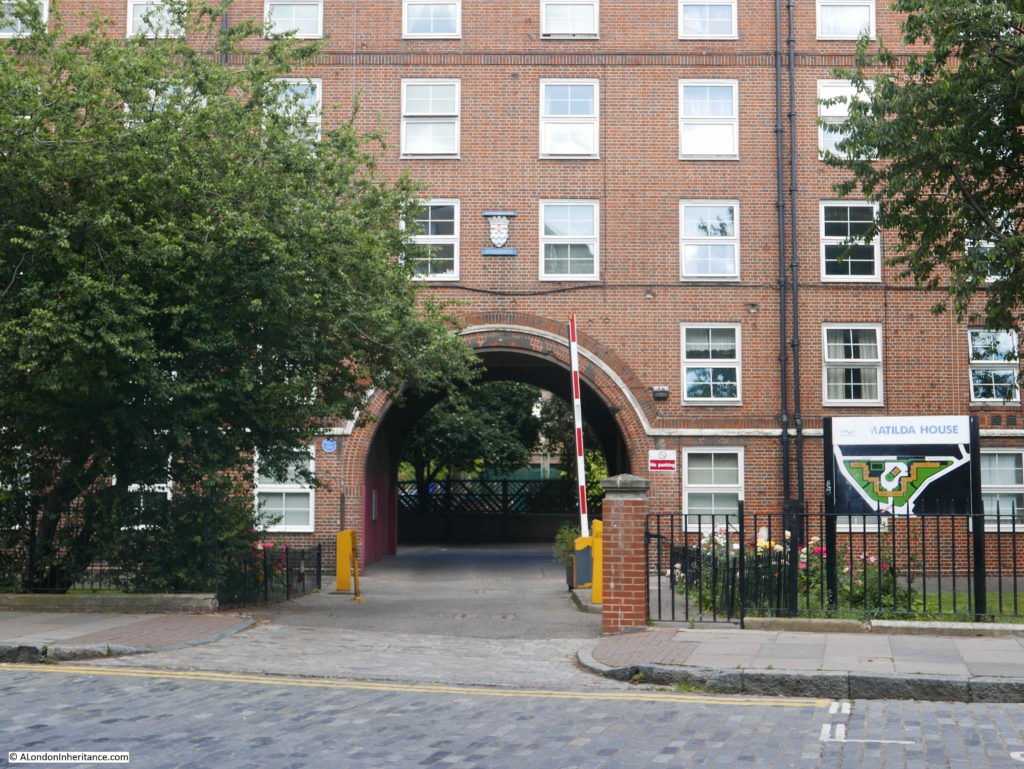 The estate was one of the many built by the London County Council, and above the main entrance arch is a rather lovely reminder: 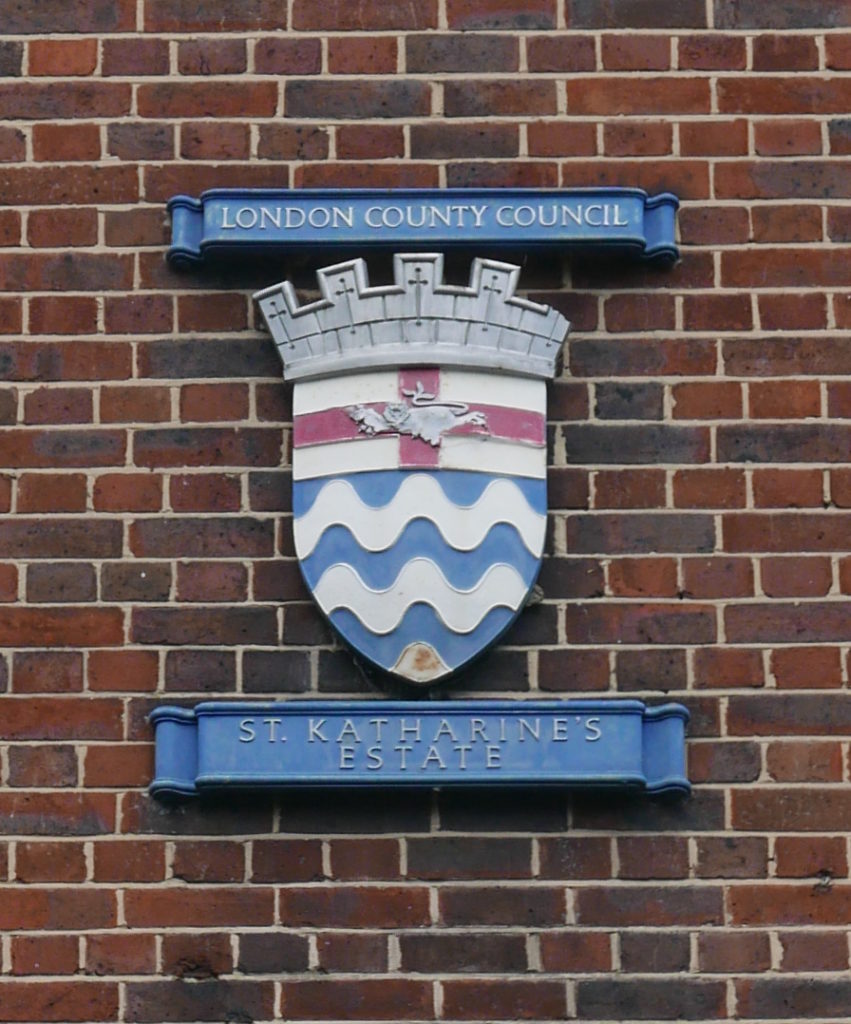 The old walls that defended the warehouses and docks are Grade II listed, so hopefully are protected to provide a reminder of the industry and business that operated in the area for so many years.

It was frustrating that I could not find the location in Thomas More Street of my father’s photo, however I do love the original photo, it is so evocative of another London which has disappeared for forever.