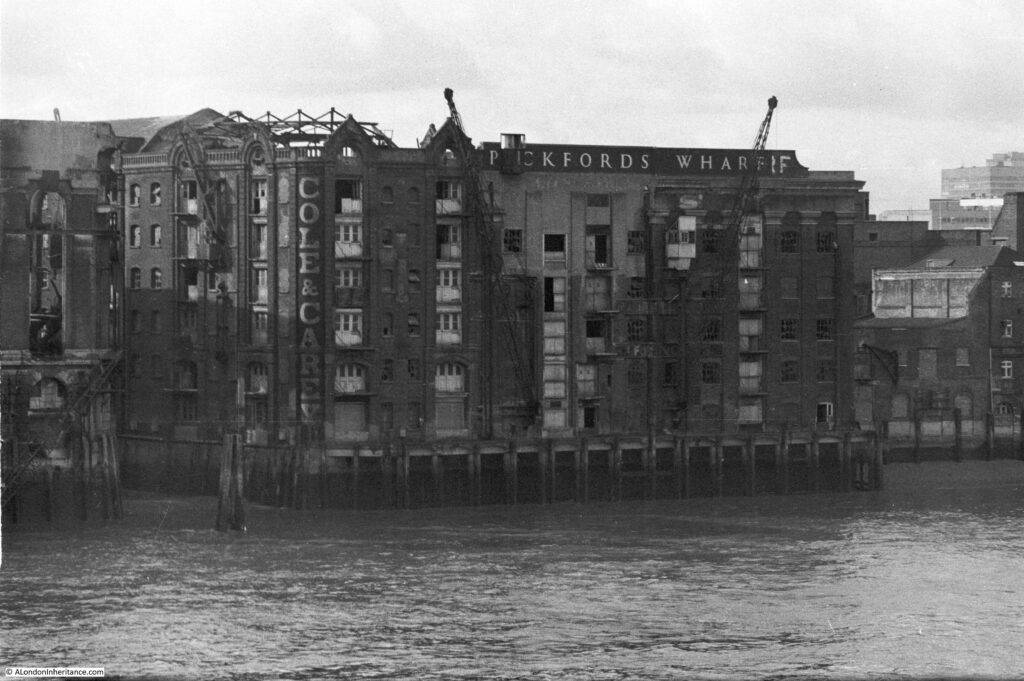 The same view of Pickfords Wharf from London Bridge, forty one years later, in 2020: 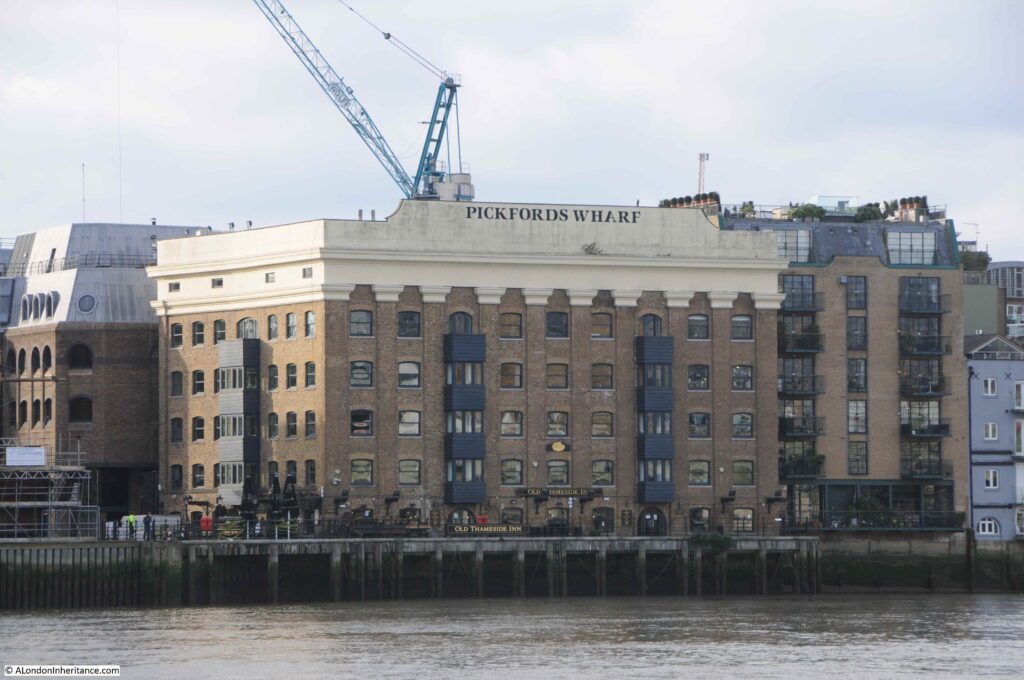 Much of the south bank of the river between London Bridge and Southwark Bridge is unrecognisable compared to the late 1970s. Some of the outer walls of some buildings have survived, but as can be seen with Pickfords Wharf, where they have, they have been subject to very substantial rebuild.

In my 1979 photo, there are two named buildings on the site. Pickfords Wharf and Cole & Carey.

Pickfords Wharf was originally Phoenix Wharf and comprised four warehouses that had been built and modified at different times over the life of the complex. The original riverside warehouse was built in 1864, however, as can be seen in the 1978 photo, the front of the building does have very different architectural styles, with the section to the right almost looking like an early example of facadism, where the ornate columns and facade have been retained on a modified building behind.

Some of the warehouses of Pickfords Wharf were on the other side of Clink Street to the rear of the building seen in the photo, and included parts of the walls of the original Winchester Palace.

Originally built by wharfingers (an owner or operator of a wharf) Fitch & Cozens, with the wharf being named Phoenix Wharf. The Pickfords name came in 1897 when Pickfords & Co purchased the site and renamed the wharf.

Although the wharf still carries the Pickfords name today, the company only owned the building for twenty four years as Hay’s Wharf Ltd. took over the site in 1921.

Pickfords Wharf was used for the storage of a wide variety of different products over the years. The 1954 edition of the Commercial Motor publication “London Wharves and Docks” has the following details for Pickfords Wharf:

The building to the left of Pickfords Wharf with the Cole & Carey sign was St. Mary Overy’s Wharf. Originally built in 1882 for a George Doo, for use as a granary.

He would only use the building for eight years as in 1890, Cole & Carey, listed as general wharfingers would take over the building. It was purchased by the company behind Hay’s Wharf in 1948 to add to their adjacent Pickfords Wharf building.

Cole & Carey were still operating at the wharf when the 1954 edition of the Commercial Motor guide was published and the details for the wharf are recorded as:

Cole & Carey had the benefit that their warehouse was alongside the river and also had a small inlet, St Mary Overy’s Dock alongside.

Both warehouses ceased to be used from the late 1960s, and they were left to slowly decay. There was a fire at the Cole & Carey building in 1979, not long before I took the photo, and the exposed metal frames of the roof, a result of the fire, can be seen.

A wider view of the south bank of the river, east of Southwark Bridge, with Pickfords Wharf in the centre: 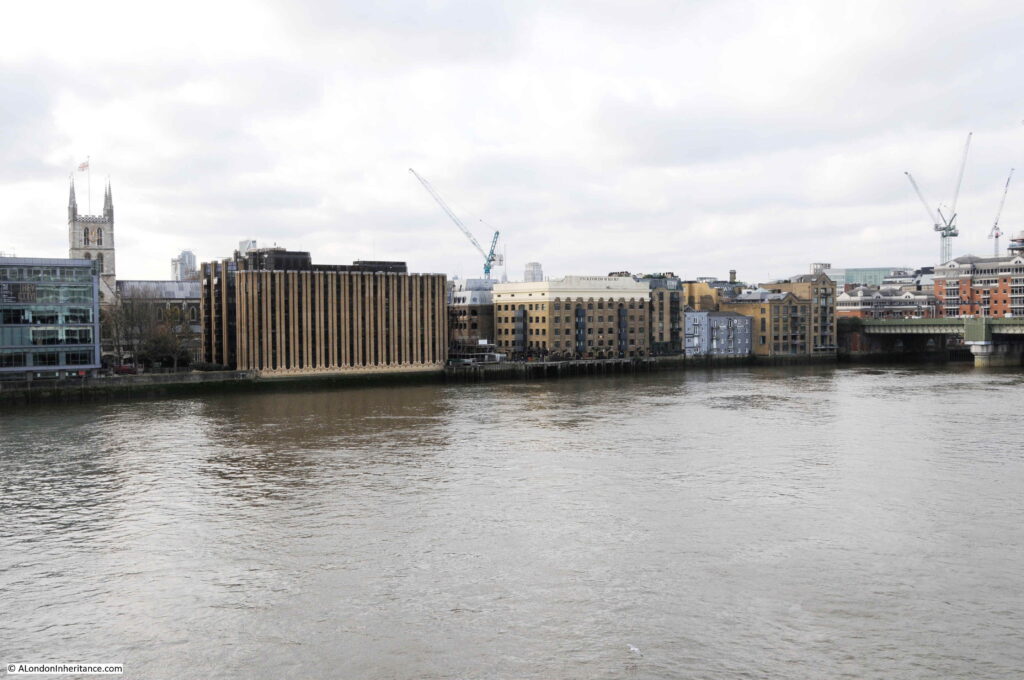 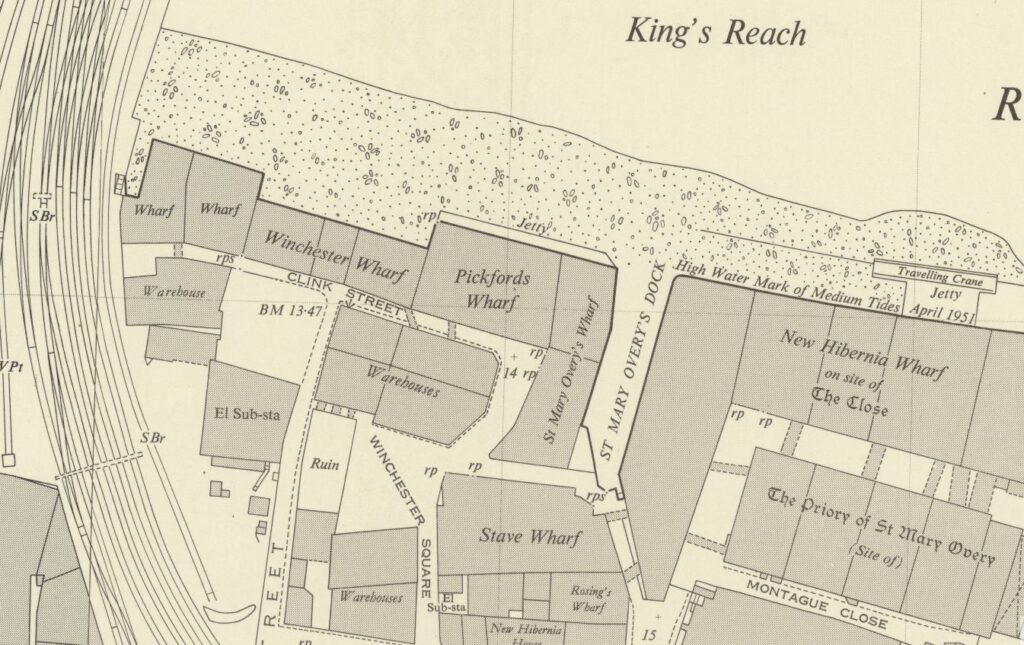 The 1894 edition of the Ordnance Survey Map shows the building with its original name of Phoenix Wharf. St Mary Overy’s Wharf is labelled as a Warehouse and is alongside, but is yet to be extended out, and to be integrated with the jetty running along the river facing side of both buildings. 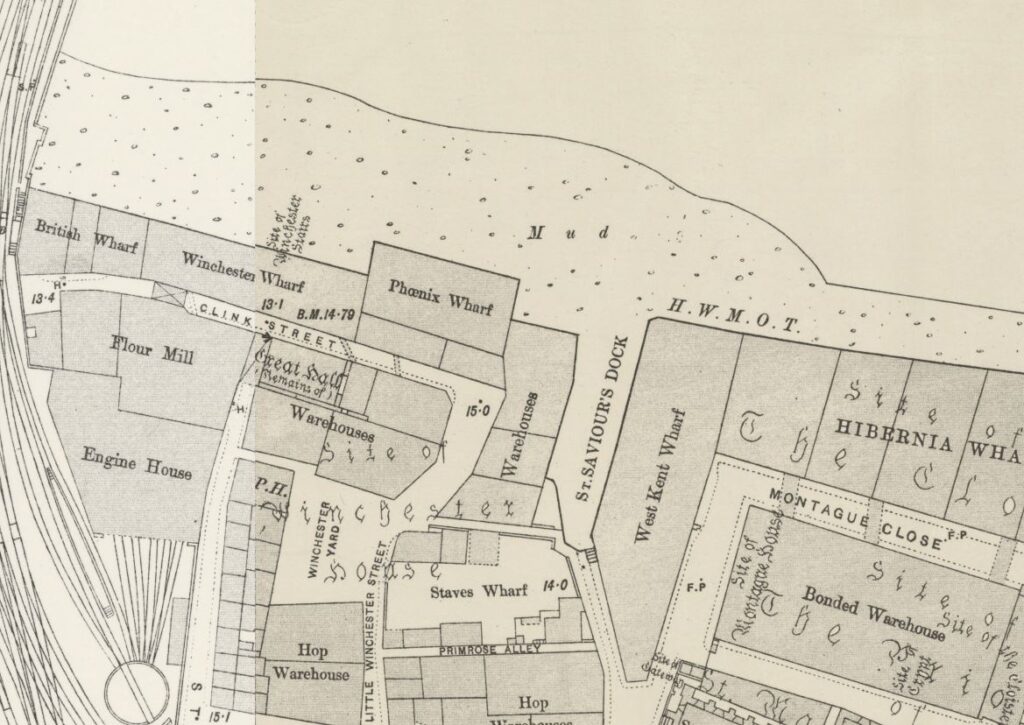 In 1894, the inlet alongside the warehouse appears to have been named St Saviour’s Dock. I need to research further, however perhaps the name was changed to avoid confusion with the St Saviour’s Dock to the east of Tower Bridge in Bermondsey.

The inlet that was St Mary Overy’s Dock is still there, but is now semi-closed off from the river and the space is used as a dock for the Golden Hinde, the early 1970s replica of the ship that Sir Francis Drake used to circumnavigate the world between 1577 and 1580.

The masts of the ship can just be seen in the following photo: 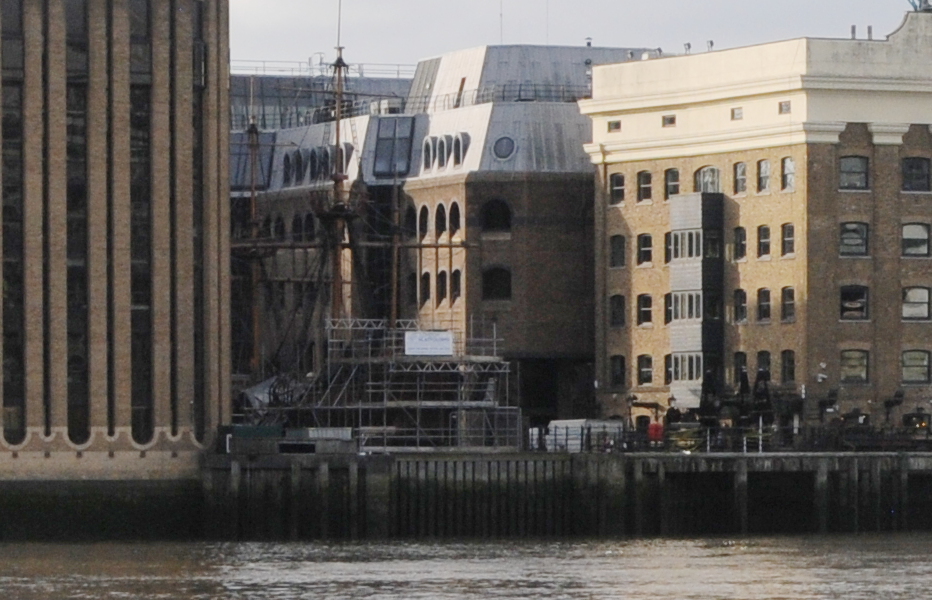 The replica Golden Hinde had a remarkable couple of decades sailing, including a circumnavigation of the world and a number of crossings of the Atlantic.

The following photo is of the bow of the Golden Hind, the eastern side of Pickfords Wharf, and some of the new buildings, built to resemble warehouses. 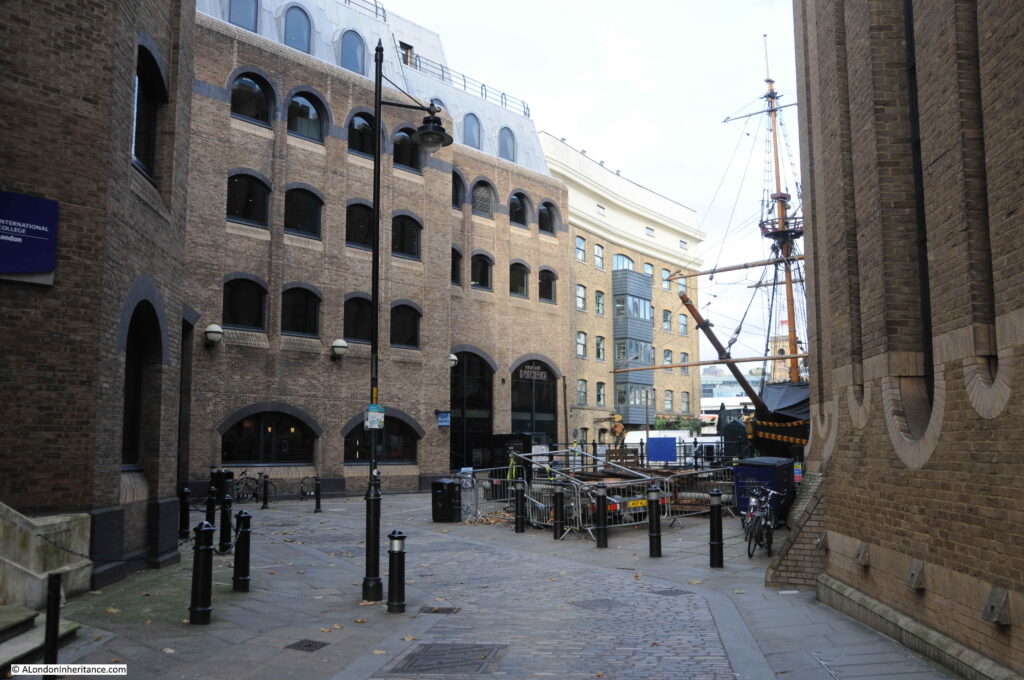 This is a fascinating area that needs a more detailed post. Winchester Palace could be found here, and the short distance between London and Southwark Bridges form a key part of Southwark’s history.

That will be for a future post, as for today’s post I also wanted to follow-up on my post of a couple of week’s ago on Seven Dials, as I went to find the:

A couple of week’s ago I wrote about Seven Dials, and the pillar that now stands at the junction of the seven streets. The current pillar is a recent replica, as the original had been removed around 1773 as it had become the focal point for so called undesirables and the Paving Commissioners ordered the removal of the pillar to prevent this nuisance.

The remains of the demolished pillar were stored at the home of the architect James Paine, at Sayes Court, Addlestone.

In 1822, the demolished pillar was re-erected at Weybridge, Surrey, and last week I was in the area so a short diversion took me to the place where the original, 1694, Seven Dials pillar can still be seen today: 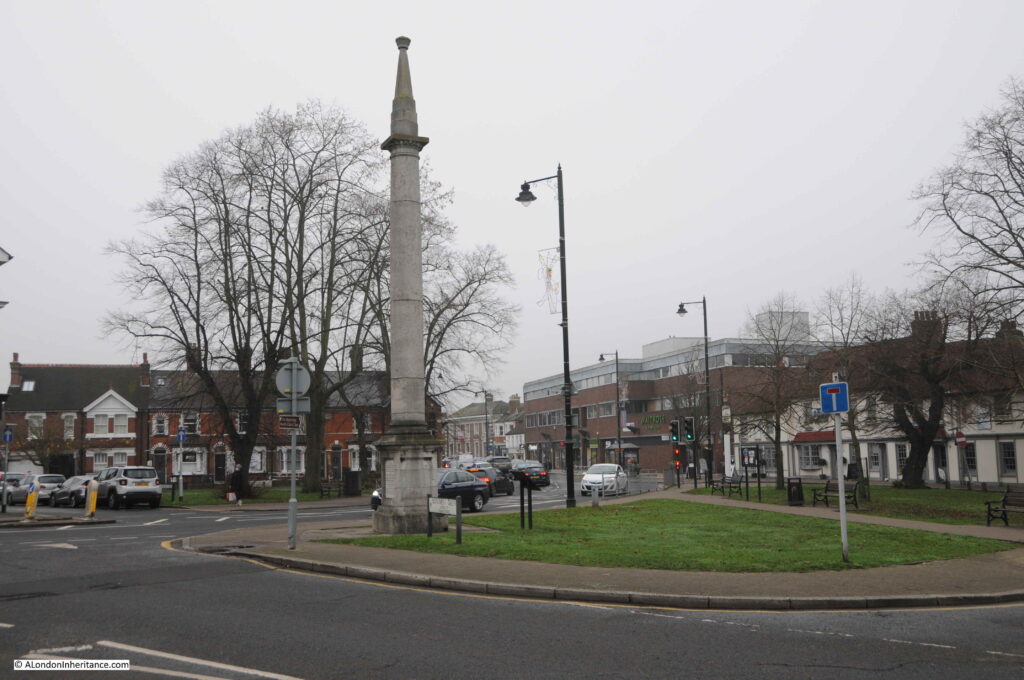 The pillar stands appropriately on Monument Green, alongside the street that leads to Thames Street, which leads down to as you have probably guessed, the River Thames. 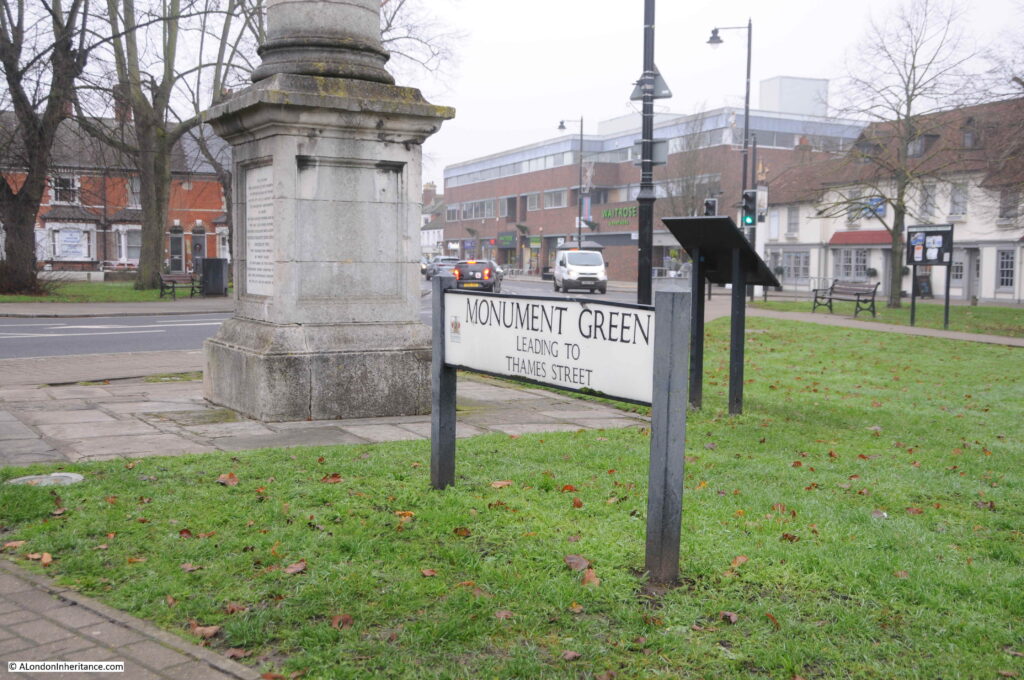 An information panel provides some history of the original location of the pillar (note the map of Seven Dials), and the reason for its relocation to a green in Weybridge, which was to commemorate local resident “Her Royal Highness The Most Excellent and Illustrious Frederica Charlotte Ulrica Catherina Duchess of York” who lived in the parish for upwards of thirty years, and died on the 6th of August 1820. 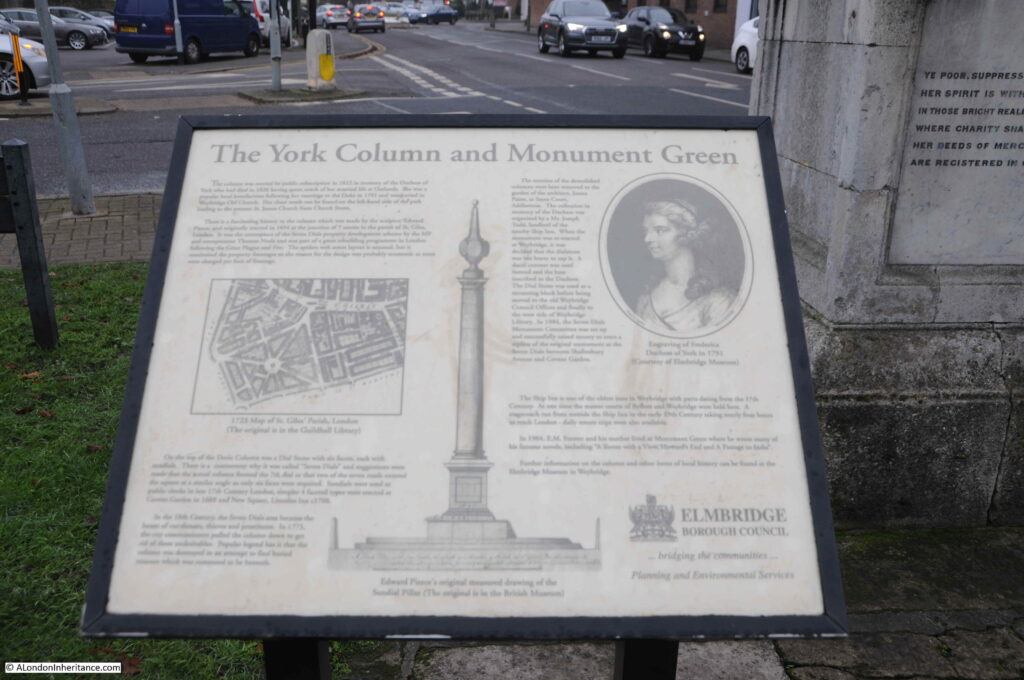 Panels added to the base of the pillar also explain why the pillar was erected in Weybridge: 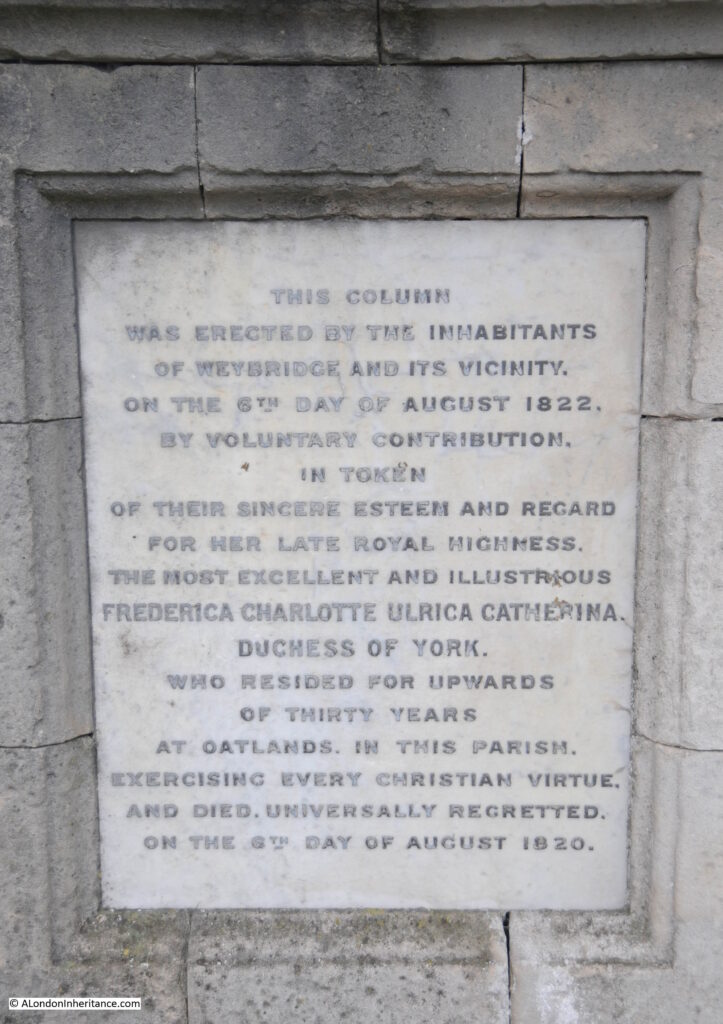 The Duchess of York came to be living in Weybridge as her marriage to Prince Frederick, Duke of York was not a long term success and there were no children which as is often the case with royal marriages, having children appears to have been the main reason for the marriage. They separated towards the end of the 1790s, and the Duchess moved to Oatlands in Weybridge, a house owned by the Duke of York. 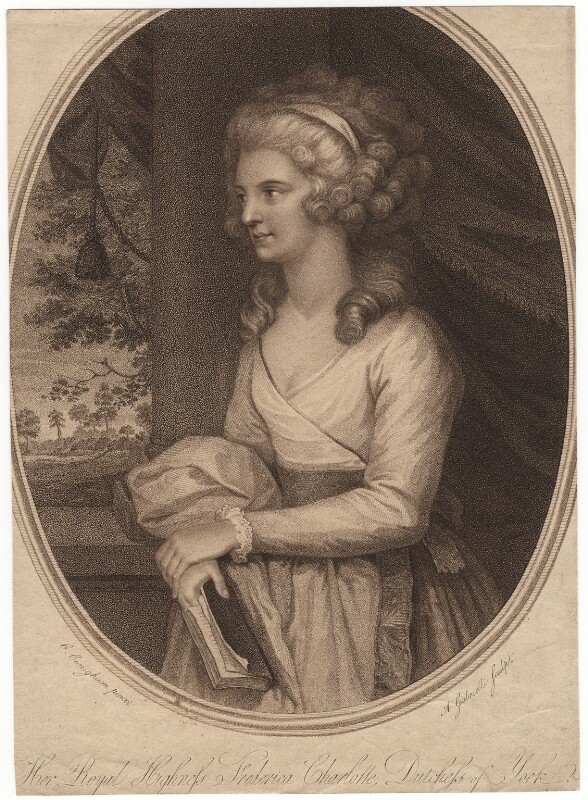 One of the panels at the base of the pillar implies that she must have been charitable to the poor of the parish as “Ye poor suppress the mournful sigh, her spirit is with Christ on high”. 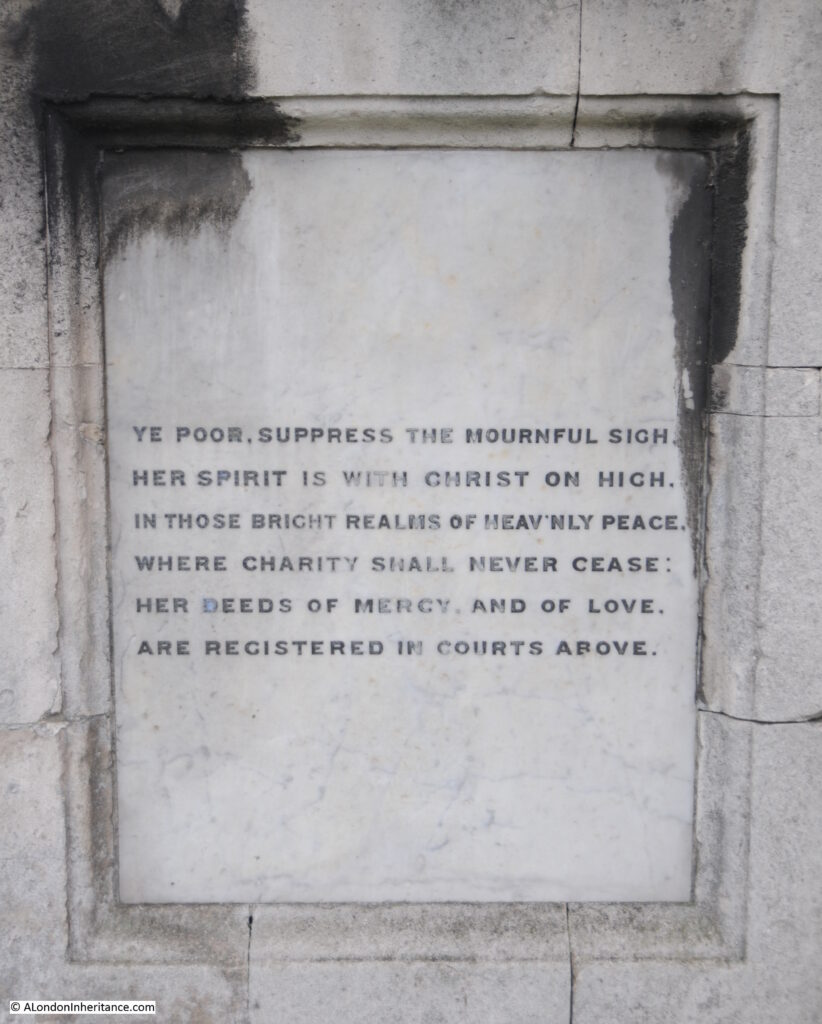 When plans were being developed for the renovation of Seven Dials in the 1980s, which included the return of a pillar at the junction of the seven streets, attempts were made to move the original pillar back from Weybridge, however the local council were against the move and refused to allow the pillar to leave.

Frederica Charlotte Ulrica Catherina Duchess Of York, a Prussian Princess who married a British Prince, is buried in St James Church, Weybridge, and still commemorated 200 years after her death by a pillar that was originally erected in the late 17th century development of Seven Dials by Thomas Neale. 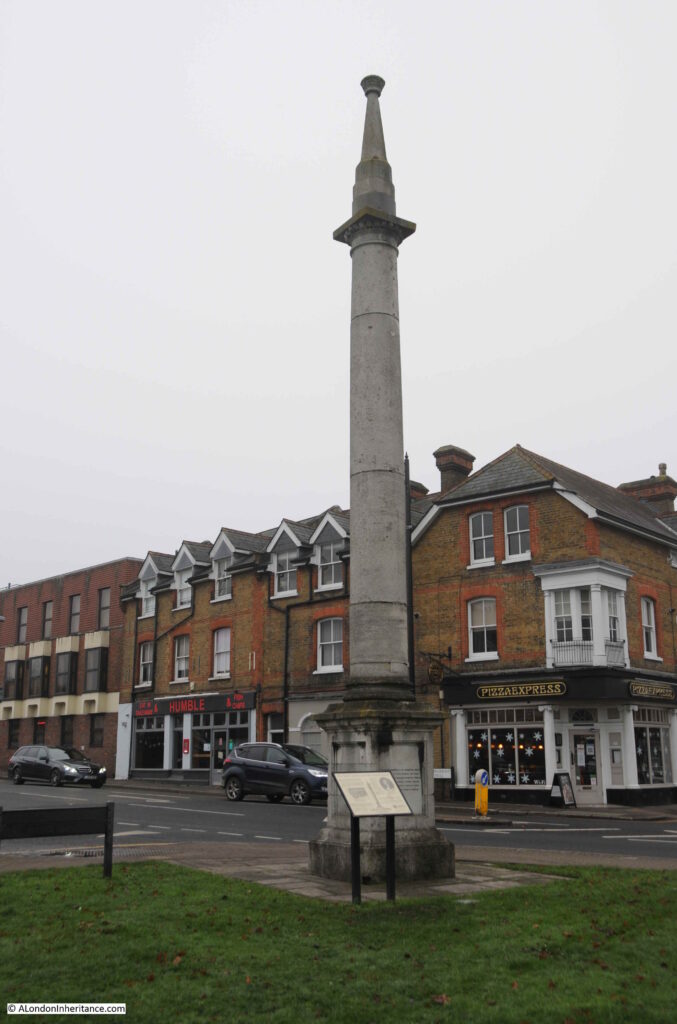 Pickfords Wharf and the original Seven Dials pillar – two very different subjects for today’s post, but share some similarities in that they have both survived an amount of demolition, and they are now serving very different purposes to those which were intended at the time of their creation.