After the devastation of the last war, there was an urgent need to rebuild and housing was a key priority in post war redevelopment. The construction techniques and architectural style were often very different from pre-war housing and new estates sprung up to replace the old street plan. One such location is the Tybalds Close Estate, just north of Theobalds Road.

My father took a couple of photos of the first blocks of the estate being built in 1949: 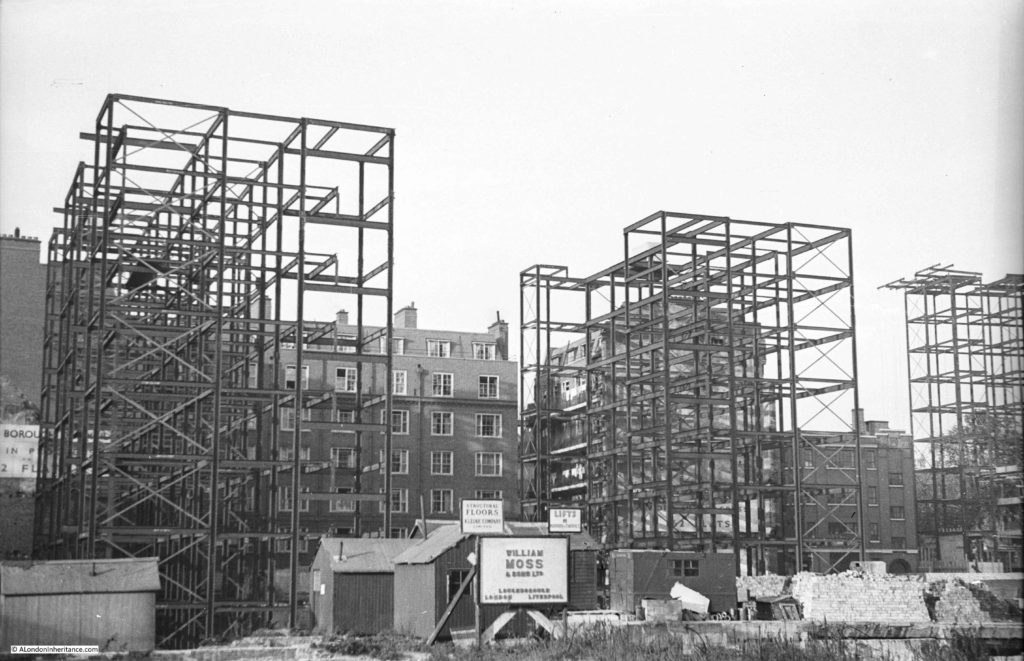 The following photo was taken looking to the right of the above photo and shows the tallest of the first blocks to be built, along with a house in the lower right corner which enabled the location to be identified and also surprised me by showing that you cannot believe that buildings are the age they appear – more on that later in the post. 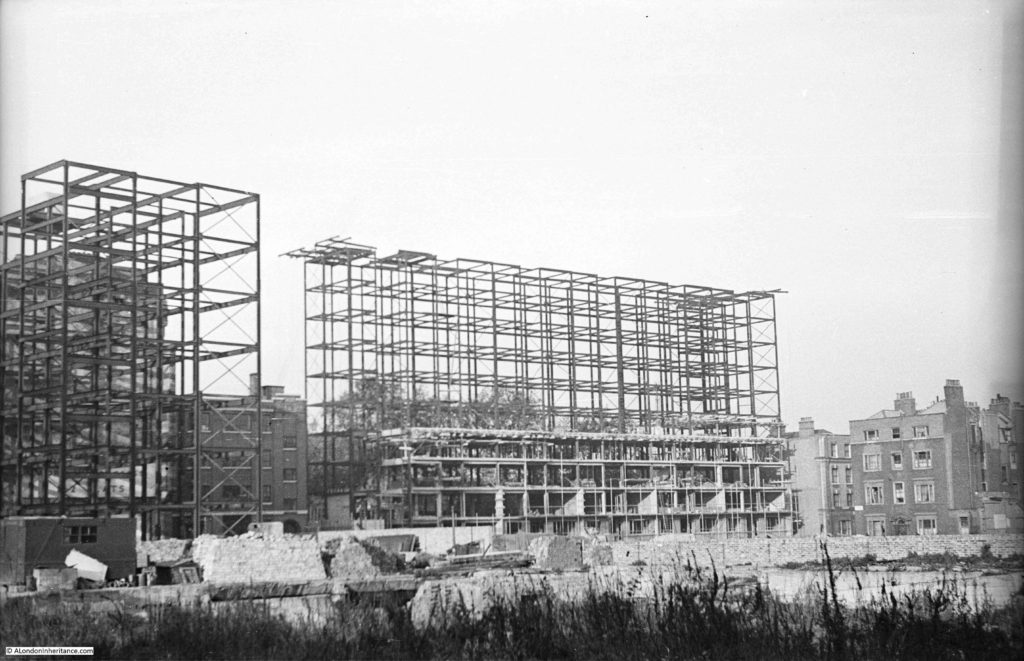 Approval to develop the Tybalds Close Estate was given in 1946 and the estate gradually grew from the late 1940s (when my father’s photos were taken) through to the 1960s when the final tower block was complete.

The first blocks were of a steel frame construction and consisted of one block of 10 storeys (the one on the right in the above photo) and four 7 storey blocks (two of which can be seen on the left of the above photos with the remaining two being built later).

The architects were Robert Hening and Anthony Chitty. They had started their architectural work in the years before the war when their work included a number of regional airports. One of these airports was at Ipswich where despite being Grade II listed, Hening and Chitty’s airport terminal buildings were demolished in 2005.

After war service, Hening and Chitty reformed their partnership and worked on a number of housing developments, commercial, industrial and schools. As well as the Tybalds Close Estate, Hening and Chitty were also responsible for the housing blocks alongside Cromer Street in St. Pancras. The style of both sets of housing blocks is very similar, although the Cromer Street blocks have been through a complete re-cladding.

The buildings were constructed by William Moss and Sons, a company original founded in 1820 and with a long history as an independent construction company until being taken over by the Kier Group in 1984.

The following map shows the location of the Tybalds Close Estate. The overall estate being roughly within the blue oval, with the original parts of the estate as shewn in my father’s photo being within the red oval.  (Map  “© OpenStreetMap contributors”). 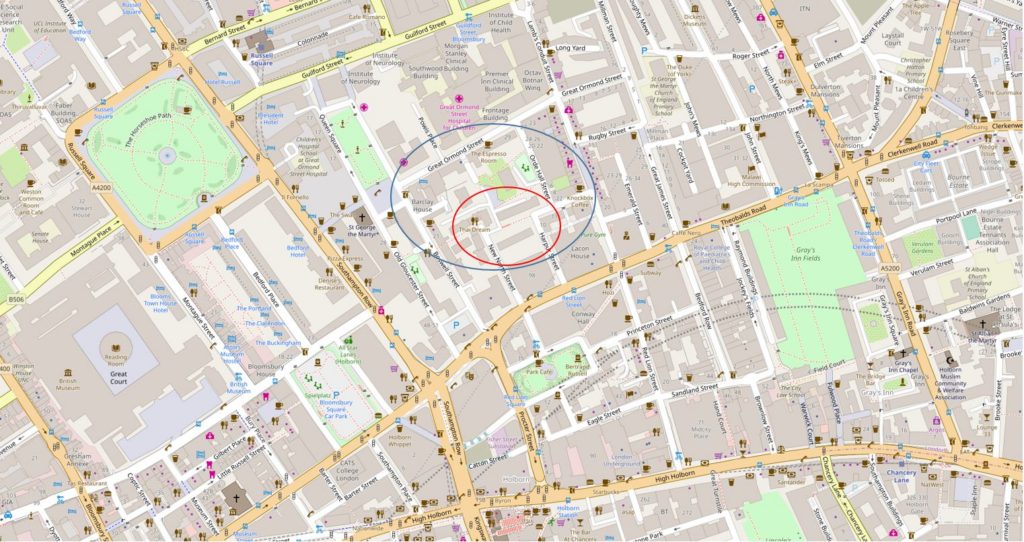 As can be seen, the area between the housing blocks and where my father was standing was open ground. Originally dense housing, but badly bombed with the area cleared ready for reconstruction. 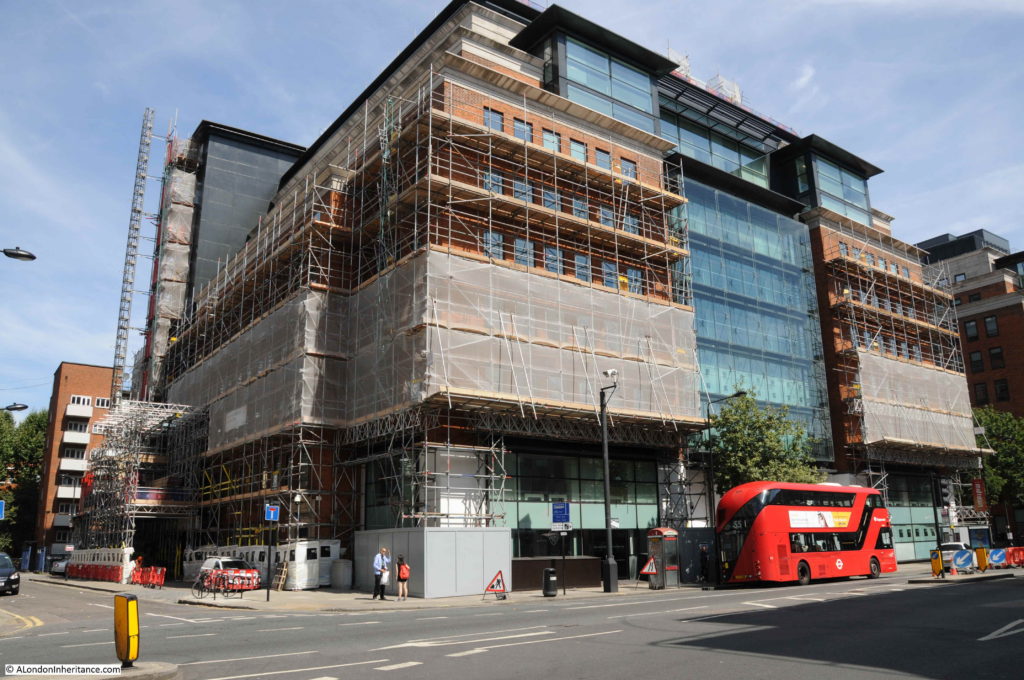 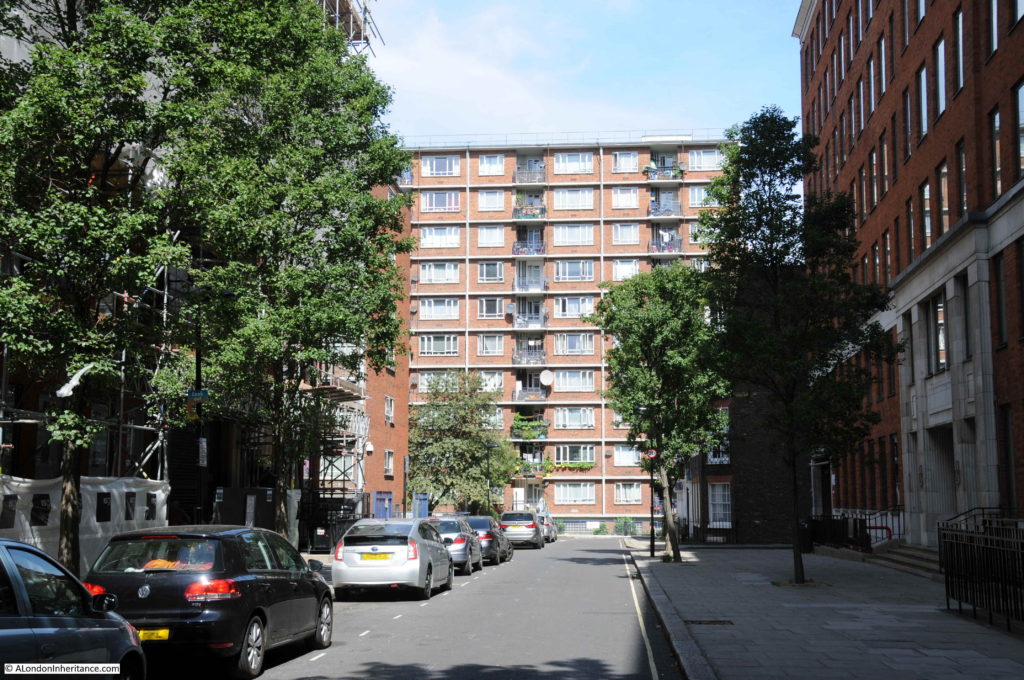 This is Windmill House. Not yet started when my father took the original photos, but of the same style and one of Hening and Chitty’s designs. To the left of Windmill House can be seen one of the buildings that was also a steel frame in my father’s photos, at right angles to Blemundsbury House. 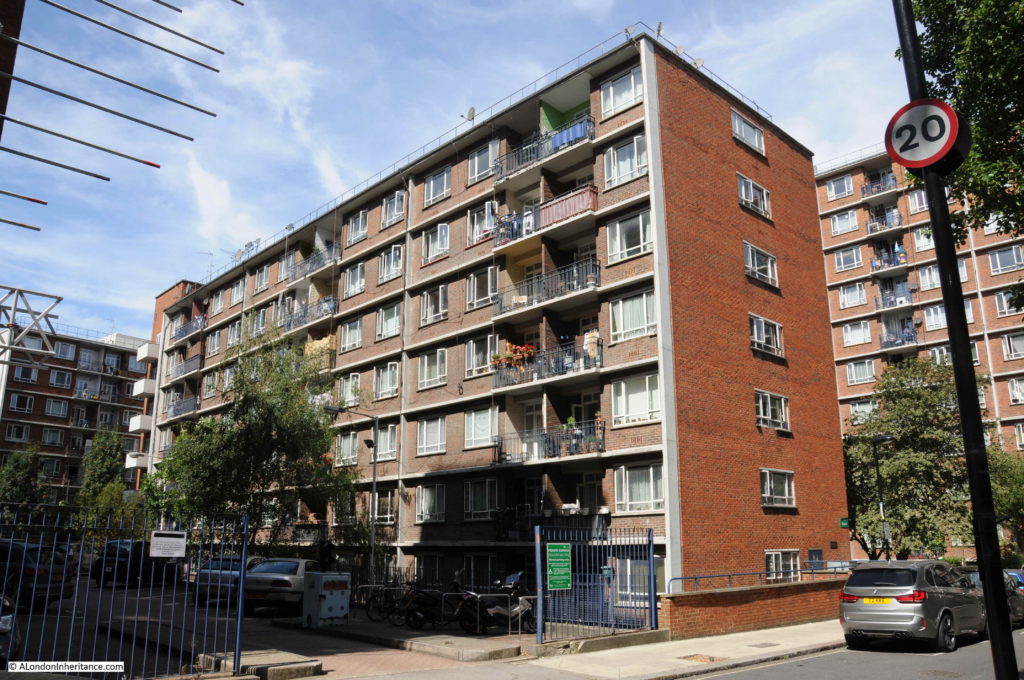 I mentioned earlier in the post that the location of the photo could be identified by the old house in the lower right corner and that I also found something that demonstrates you cannot always believe what you see.

The following is an extract from the second of my father’s photos. It is an enlargement of the house at the lower right corner of the photo. 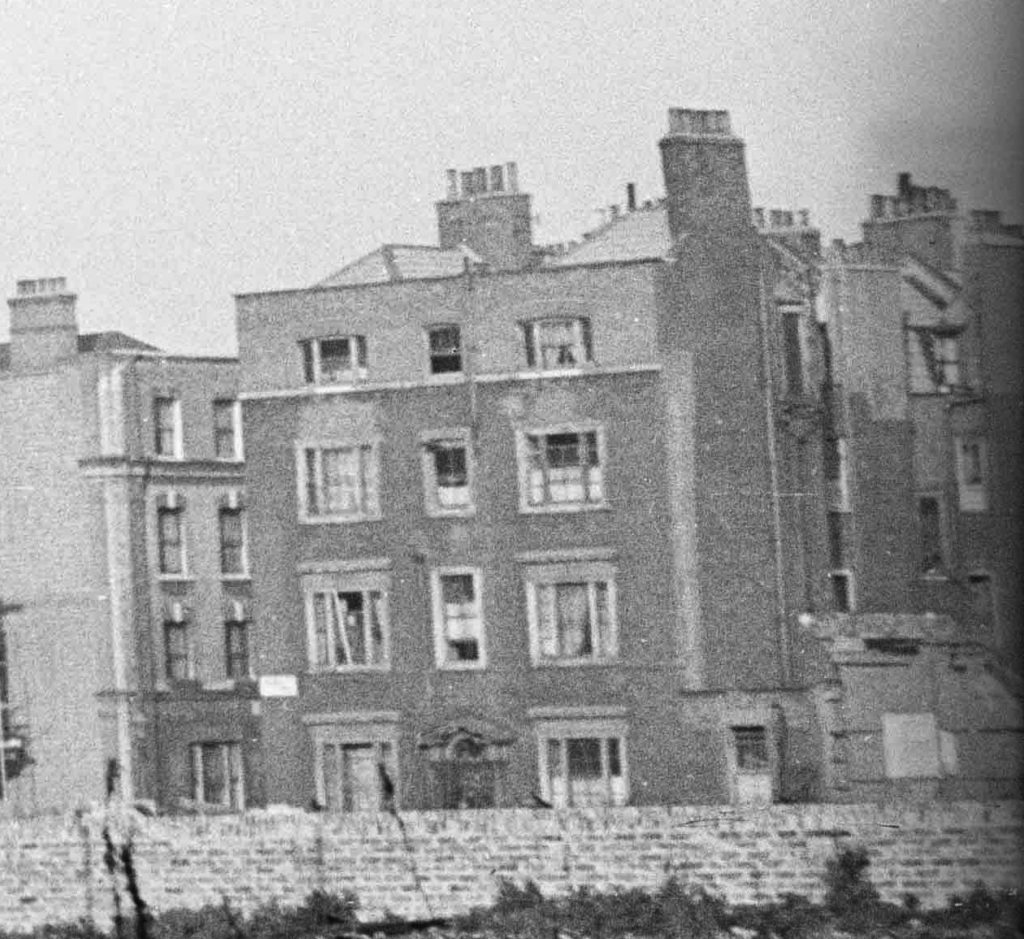 The house is on the corner of Harpur and Dombey Streets. The following is a photo of the same house today. 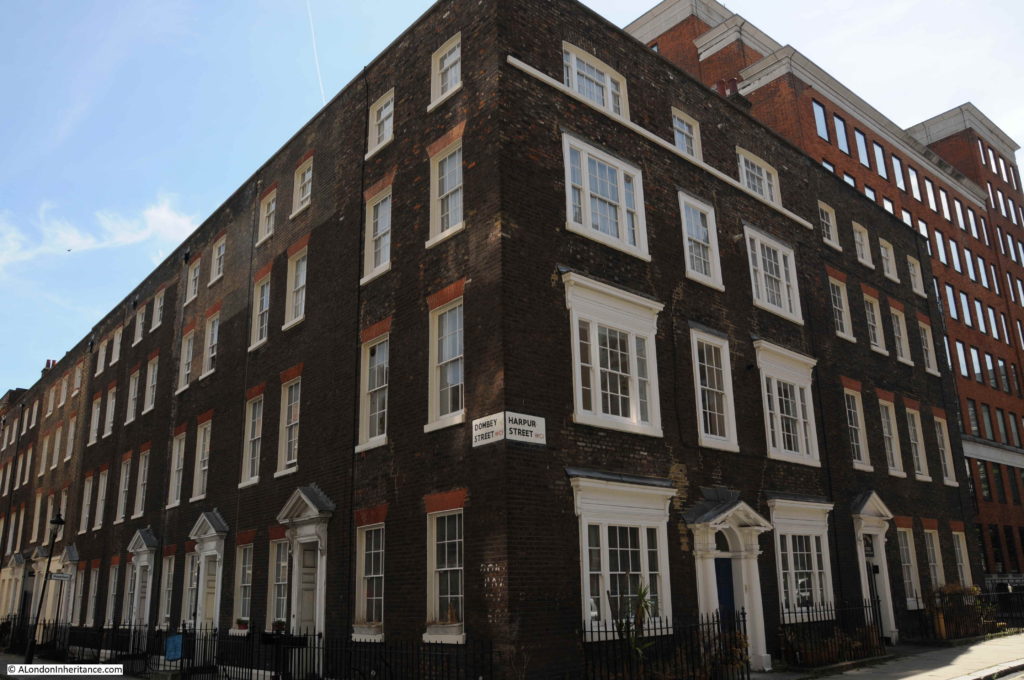 The house in the original photo looks the worst for wartime damage, however the layour of the windows is the same, the same entrance door, the same seperator at the top of the 3rd floor and the street name sign is in the same place on the corner of the house.

What is really stange is that in the original photo there is no building to the right of the corner house, although today there is a substantial house which looks original in all aspects. 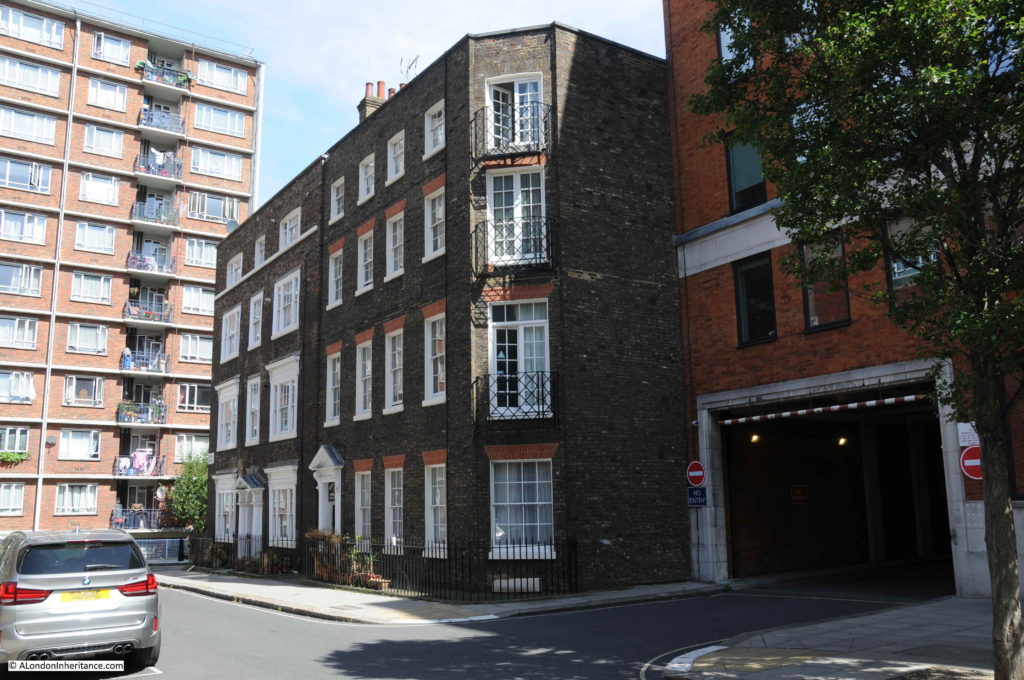 This is another view of the two houses. The further being the one in the original photo and the house closest to the camera must be a post war reconstruction of the original house on the site.

The attention to detail is remarkable. The brickwork is the same, the style of the house is the same as the houses in Dombey Street. If I did not have my father’s photo for evidence I would have thought that this was an original Georgian house.

The entrance door to the reconstructed house is shown in the photo below. Note how identical the brick work and the size of the coarse between the bricks is to the wall on the left. There must have been piles of bricks in the area from the bomb damage and I can only assume that bricks and probably door and windows were reused from demolished houses to construct this new house. 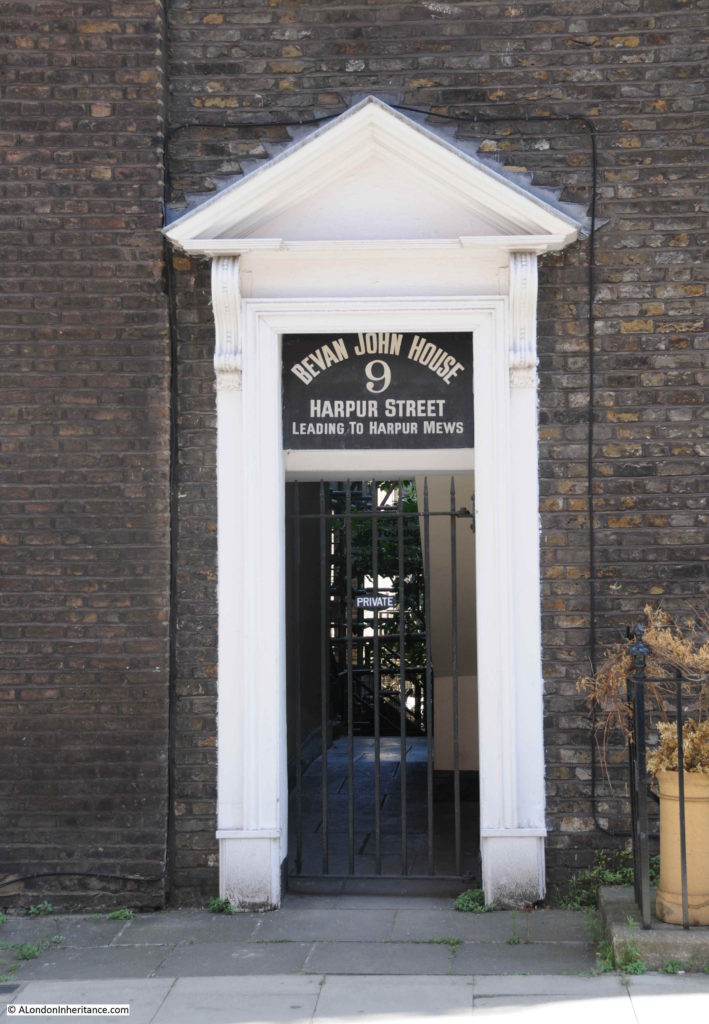 In the enlargement of the original photo there is a doorway visible to the right of the main house and this was probably the entrance to the original house, but not to Harpur Mews as the sign above the entrance advertises today.

The following map is an extract from the 1895 Ordnance Survey map. 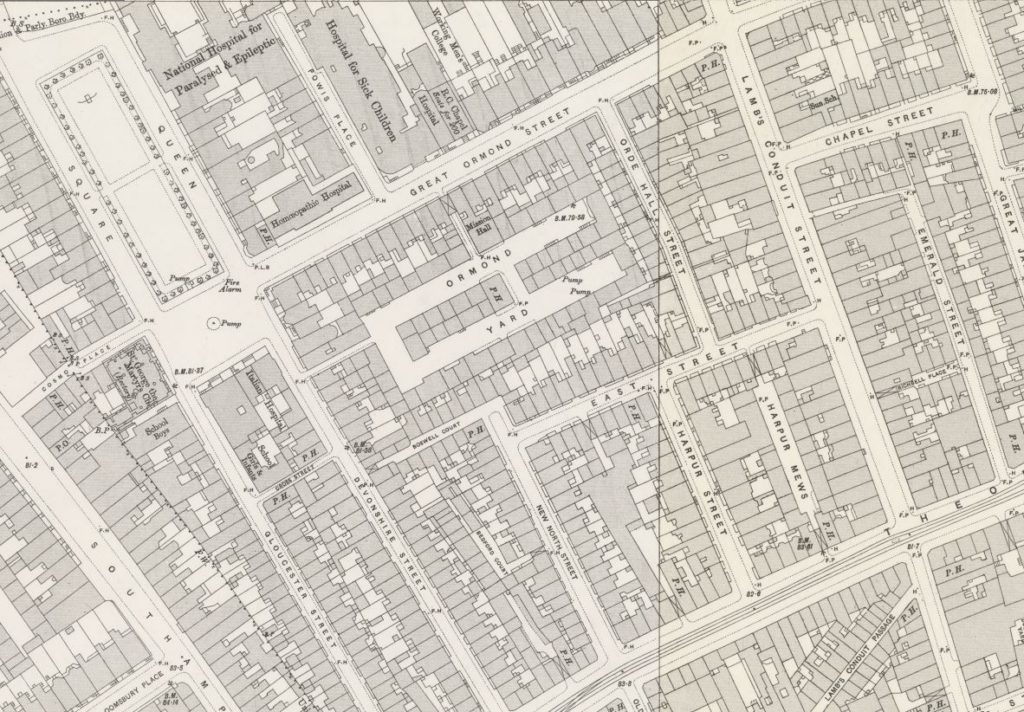 Harpur Street can be seen to the lower right. Harpur Mews is in the middle of the block and there is no entrance to the mews from Harpur Street. the entrance was from East Street (now Dombey Street) as shown by the building with the X which denotes a building above a through entrance.

The map also shows the dense housing across the area, much of which is now covered by the Tybalds Close Estate. Blemundsbury House occupies the space occupied by the houses to the north of East Street, starting from just to the right of the junction with Harpur Street and running to the left.

I could not find too much information on the area, however I did find a photo of Ormond Yard, the largest space in the centre of the map and now occupied by the Tybalds Close Estate. The following photo was published in The Sphere on the 2nd December 1933 and is one of a series of photos taken by a Mr. William Clark in 1918. Mr. Clark was apparently a Birmingham businessman who was fascinated by London in the time of Dickens and set out to photograph what he could find that was typical of Dickens time and also mentioned in Dickens novels. 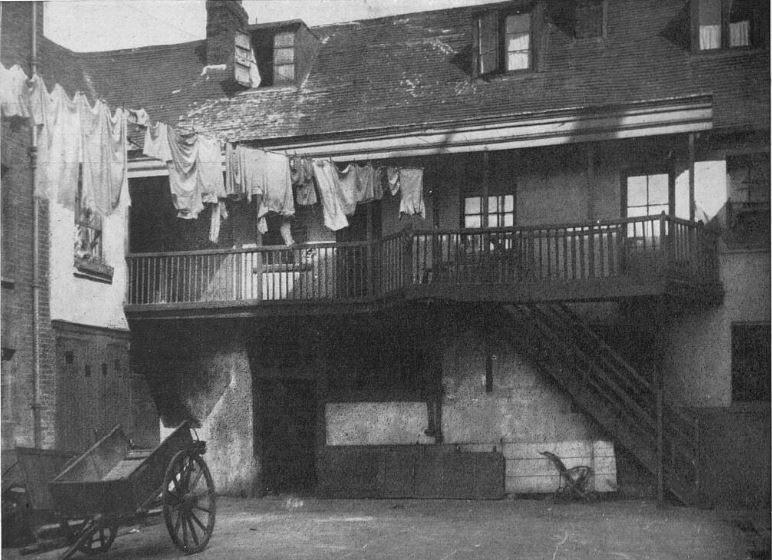 The first mentions that I could find of Ormond Yard date back to 1770, and through one hundred plus years there are the usual reports of the casual crime, accidents and violence that could be found across the dense housing of London.

The pub in the centre of the yard was The Crown. A report in the Sporting Life on the 2nd of June 1885 offers a glimpse of life in the yard:

“The Crown, Ormond Yard, Bloomsbury – A high class show took place at this establishment on the 31st, the exhibits consisting of bulldogs, bull terriers, mastiffs, pugs, dachshunds, and almost every variety of choice toy pets. The house, as usual, was well attended by fanciers and dealers. the chair was occupied by Mr. Alfred George faced by Mr Currie, supported by the following;- Messrs Strugnell (champion pugs), Clarke (bull dogs), Anderson (white half-bred dogs), Painter (champion spaniels), Matthews and Taylor (toy black and tan terriers) and Nicholls (mastiffs); also a gentlemen with some remarkably fine dachshunds, and many others together with many strangers. The handsome silver collar for the best bull terrier was taken by Mr. A. George’s Prince, a very handsome dog.”

The land on which the Tybalds Close Estate is built was part of the early 18th century expansion of London. Rocque’s map from 1746 shows the area below: 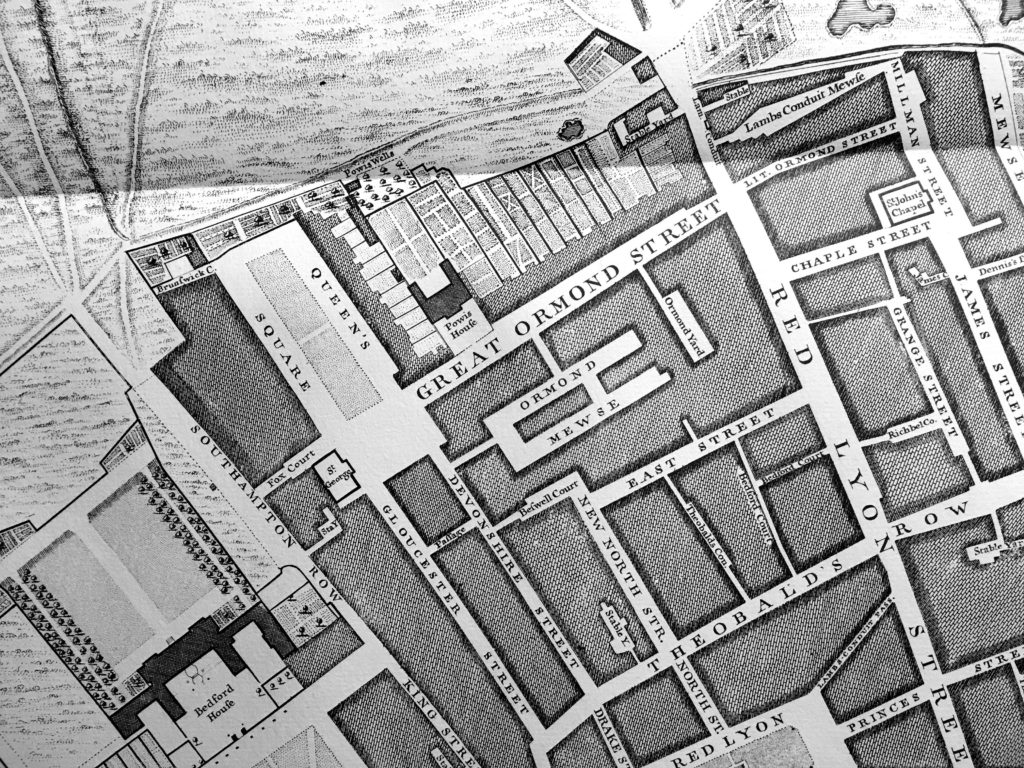 The fields to the north and west show that the area at the time was on the edge of built London. At the time, and as probably built, Ormond Yard was a separate smaller yard and the main area was Ormond Mewse – the two areas would later combine as shown in the 1895 map.

One final point, the larger of the two blocks being built in my father’s photo is Blemundsbury House. The name provides an old connection to the area of Bloomsbury.

Blemundsbury was the original name of Bloomsbury. In turn, Blemundsbury took its name from a 13th century drainage ditch in the area known as Blemund’s Dyke.

The Tybalds Close Estate is at the heart of a fascinating area.