My father took the following photo in early 1947 from the Embankment, just by the base of the Hungerford railway bridge looking over towards the County Hall, the offices of the London County Council. The photo is from the end of a strip of negatives that has suffered some damage. I will process and repair, but for this blog my intention is to present my father’s photos as I first see them after scanning. The photo is interesting for two features, the temporary bridge over the Thames that can be seen running across the river in front of County Hall,  and the large heap of rubble to the left of County Hall. The very start of demolition of the site that would a few years later be the location of the Dome of Discovery for the Festival of Britain. 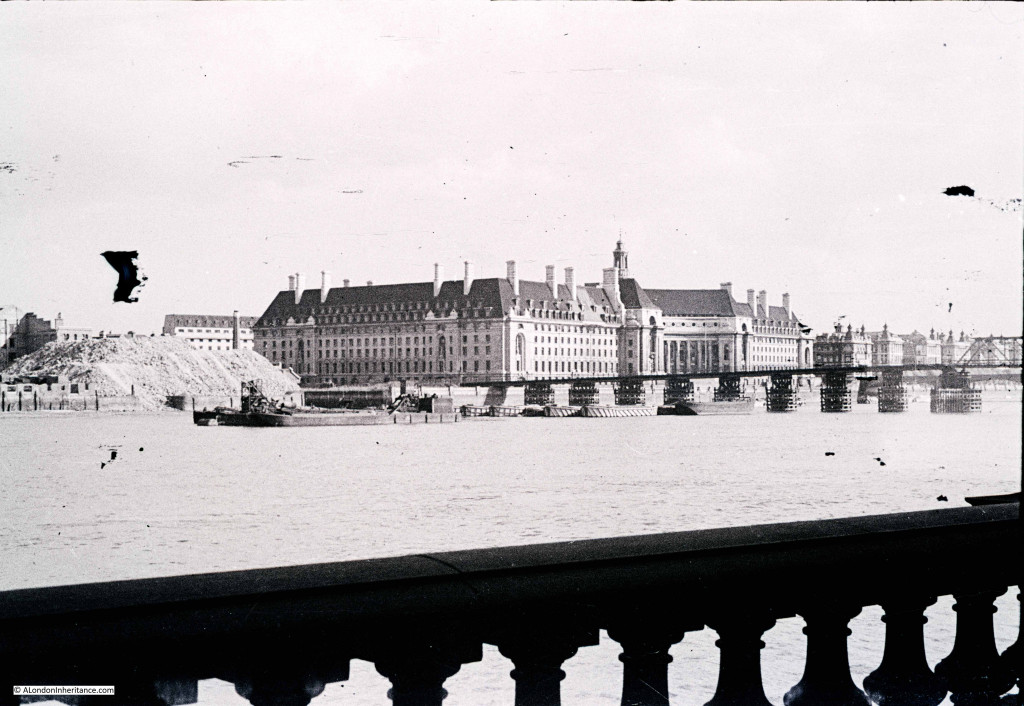 The location where my father took the photo was easy to find. As well as County Hall being the main feature in the photo, the balustrade in the foreground is still there. Just beyond County Hall to the right are the original buildings of St. Thomas’ Hospital.

Unfortunately the weather was not as sunny as when my father took the photo 68 years earlier, however my 2015 photo from the same location: 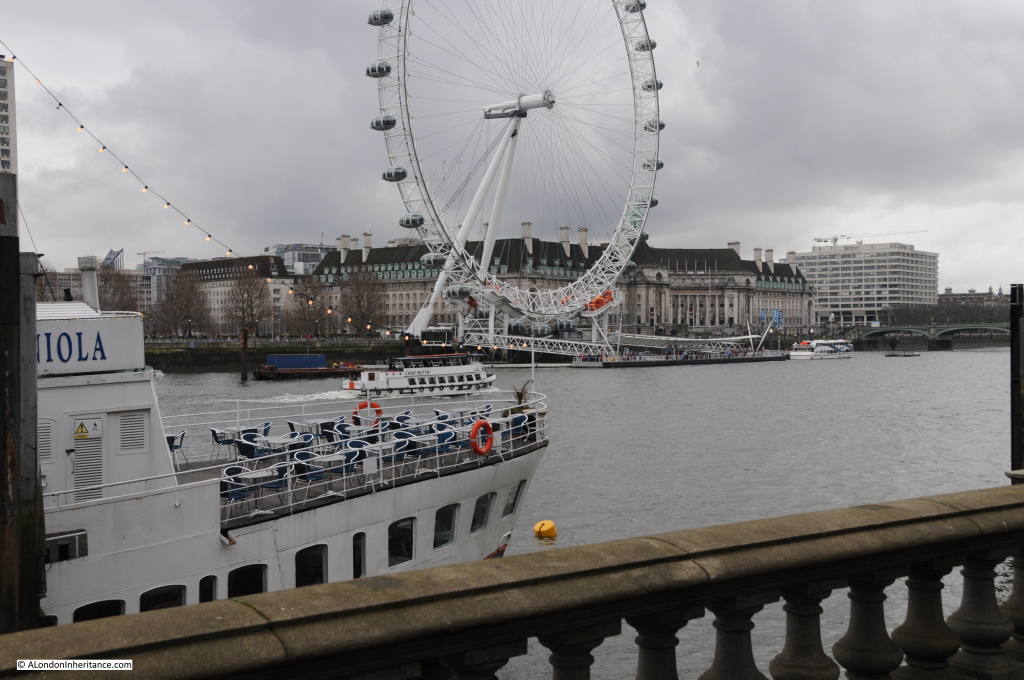 The ship in the foreground was not there in 1947. She is the Hispaniola, launched in 1953 as the Maid of Ashton and entered service in Scotland. She was converted into a restaurant ship and renamed the Hispaniola in 1973, finally reaching her current place on the Thames in 1974.

The temporary bridge over the Thames was one of a number constructed during the war. The aim was to provide an alternative route over the river if the main bridges were bombed. This bridge would have provided an alternative route if the nearby Westminster Bridge was hit. The temporary bridges were removed between 1947 and 1948 so my father’s photo was taken a couple of months before it was dismantled. The route of the temporary bridge was from the north bank to the south, to land adjacent to the County Hall. The following photo is from the landing point on the north bank looking along the line of the bridge to the south bank. These bridges were temporary and there is no evidence of the bridge to be found today, just the London Eye which now dominates this area of the south bank. 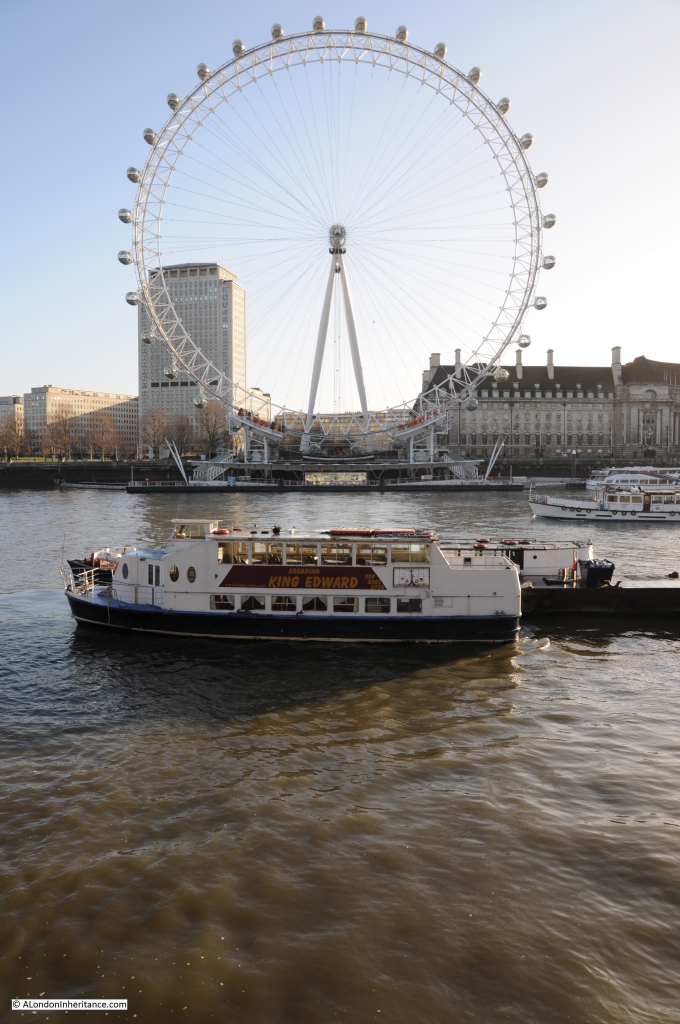 There was a second photo on the same strip of negatives, in better condition, and taken looking slightly to the left of the first photo so we get a full view of the location that would host the Festival of Britain and which is now the Jubilee Gardens. As with so much of the land along the banks of the river, the stretch between Hungerford and Westminster bridges was a continuous stretch of warehousing and industrial activity with many wharfs and inlets to the river. 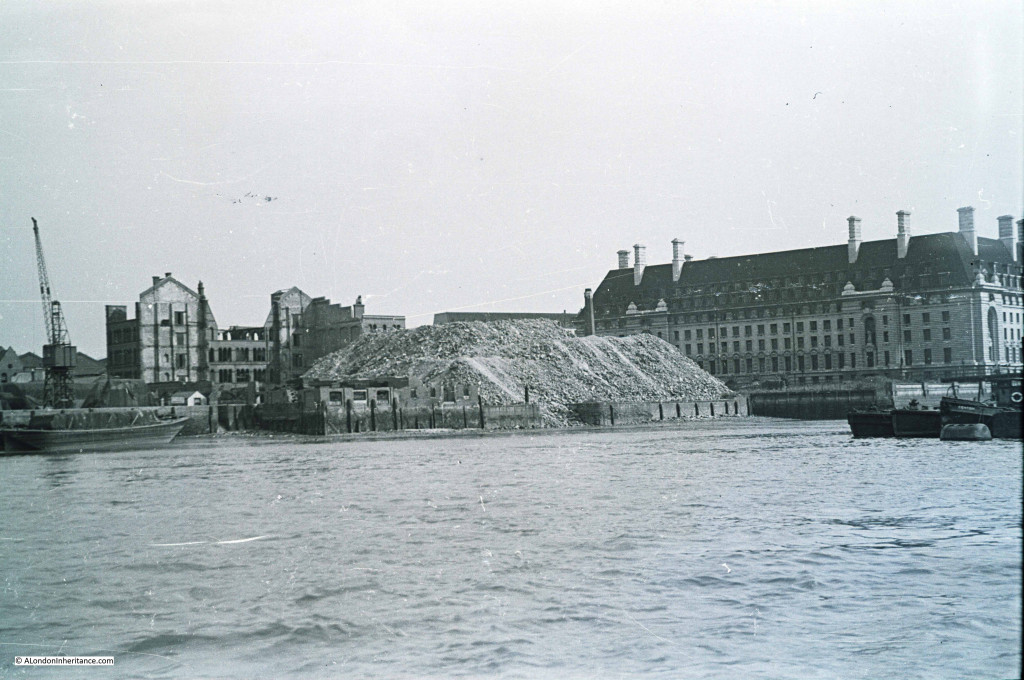 Looking across to the same area now: 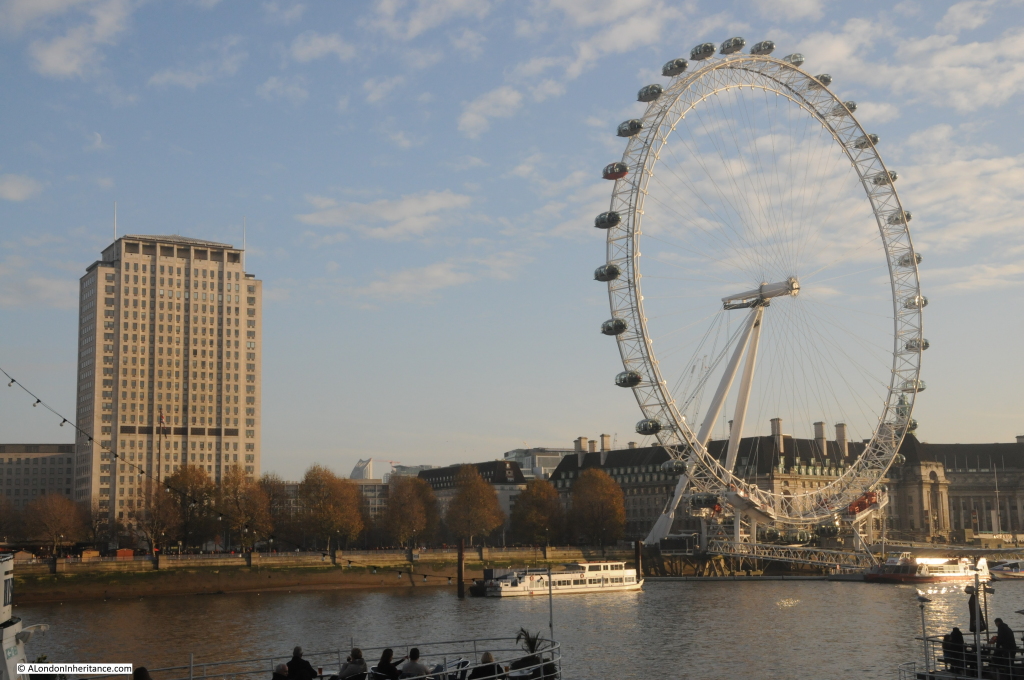 To give some idea of the activities which took place along this stretch of the river, the plans for County Hall detail the occupiers of the site prior to the start of the construction. Adjacent to Westminster Bridge was the Westminster Flour Mills, then came the Lambeth Borough Council Works department with Acre Wharf and Vestry Wharf on either side followed by the Cross and Blackwell factory at Soho Wharf, then extending past the County Hall site was the London County Council Works Department. The whole stretch providing a very irregular frontage onto the Thames, as shown in the 1947 photos.

The following map is from Bartholomew’s Reference Atlas of Greater London from 1940. Whilst not showing the wharfs, it does show the area adjacent to County Hall, covered by my father’s original photos, part occupied by the Government India Stores and that a road, Jenkins Street, now long since disappeared extended down to the river’s edge from Belvedere Road. 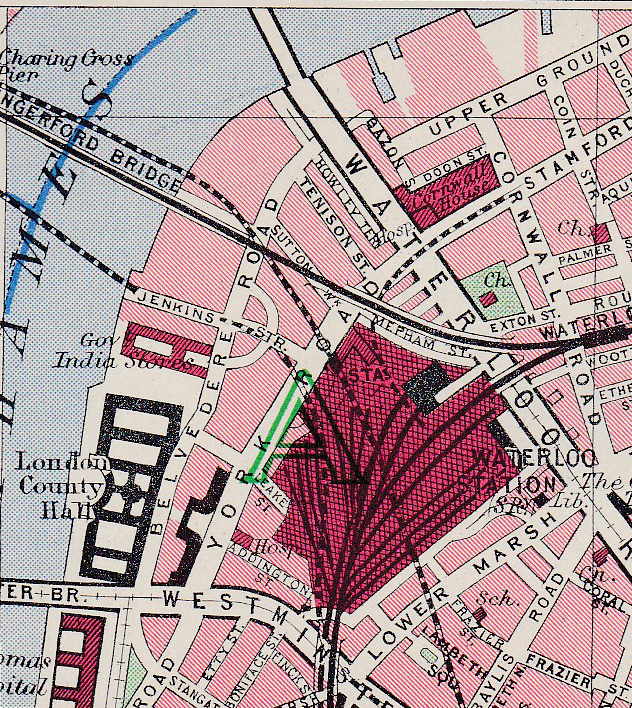 Construction of County Hall commenced in 1909 with a “coffer dam” being built between January and September 1909 to separate the construction area from the Thames so this could be emptied of water. Work was then started on the embankment wall in September 1909 to build the substantial wall that we see today.

Once the area was separated from the Thames, construction of the foundations and the raft on which the building would sit started. It was during this work that evidence of London’s Roman history was found with the discovery of a Roman boat deep in the sub soil, 19 feet below the river’s high water level. 38 feet in length and 18 feet wide the boat was considered to be a “round-bottomed ocean-going” boat. After seeing the light of day and a very different Thames than the boat must have last sailed down, it was stored by the London County Council before being transferred to the Museum of London.

Work continued on County Hall during the First World War, initial impact of the war was on the slowing of supplies of Cornish granite due to the military demand for rail transport. Reduction of supplies resulted in manpower being moved onto other activities with work slowing considerably after 1915. After the war, work picked up again, with 349 men working on the site in July 1919 rising to over one thousand in 1921. County Hall was finally finished and officially opened in July 1922.

Aerofilms took the following photo when much of the construction up to roof level was nearing completion. The area beyond County Hall is still industrial and warehousing typical of this whole stretch up to Westminster Bridge prior to the construction of County Hall. 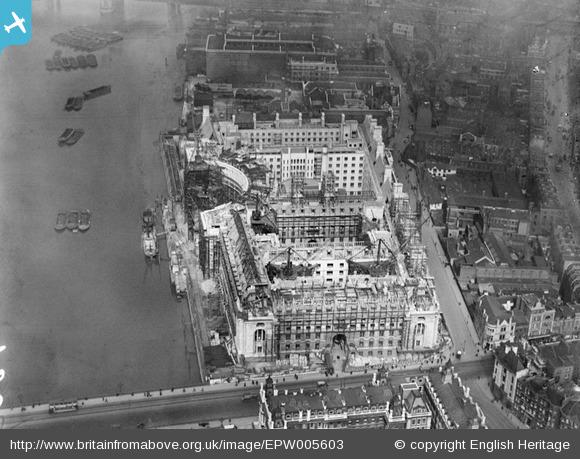 It is fascinating to read how the authority for London was viewed in the first half of the last century. From the 1951 edition of The Face of London by Harold P. Clunn:

“The London County Council is generally admitted to be the largest and most efficiently managed municipal governing authority in the world. It superseded the old Metropolitan Board of Works created in 1855 to watch over the requirements of London, and its 118 councillors were first elected on Thursday, 17 January 1889. On 21 March 1949 it celebrated its Diamond Jubilee. It had often been said that if Parliament ceased to talk for twelve months the country would suffer no inconvenience, and many people would probably be glad. On the other hand, if the London County Council ceased work for a few days indescribable chaos would result, and the health of Londoners would be seriously jeopardized. its housing estates house 500,000 people who pay £5,000,000 a year in rents. In its 1,400 schools 300,000 children are educated by 14,000 teachers.”

The following postcard with a view taken from the Victoria Tower of the Houses of Parliament shows the area of my father’s photo following clearance and before construction of the Festival of Britain. This must have been around 1949. the temporary bridge has been removed along with all the buildings and rubble from the south bank site, with the land flattened all the way down to the river. It must have been a sight at high tide with the river probably able to extend a fair distance inland at this point. 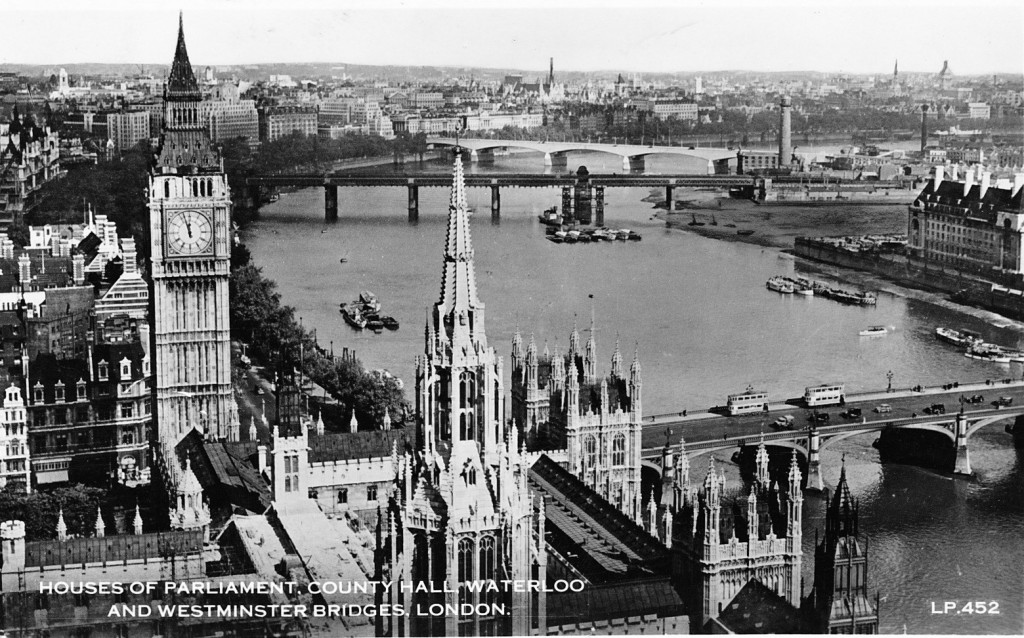 The view from the Victoria Tower also shows how few tall buildings there were across London. An aspect of the city that would change very dramatically over the following 60 years.

13 thoughts on “A Wartime Temporary Bridge And County Hall”