Many of the photos I have used to illustrate how London has changed are of the more well known views of London, from the Stone Gallery of St. Paul’s Cathedral, from Greenwich, from Waterloo Bridge, the Royal Festival Hall etc. however sometimes to get a real understanding of how London has changed since the last war in terms of the streets, buildings, employment and people, you need only look in some of the more ordinary, mundane places.

I was unsure of where my father took the subject of this week’s post. There are two photos, taken from within the same tunnel, looking out to streets with closely packed warehouses on either side.

The warehouses with their trademark walkways over the streets were clearly along the Thames. The tunnel in which the photo was taken would be adjacent to one of the stations or bridges across the Thames.

I vaguely recognised the tunnel from many walks along the south bank of the river, and a morning exploring all the tunnels finally found the location, however the changes were such that I was still slightly unsure (I will explain how I confirmed the location later).

The first photo, and it is a Sunday, early in 1947 and a solitary man walks with his two dogs towards my father taking the photo from the middle of the tunnel.

Welcome to Pickle Herring Street, taken from the tunnel under the southern approach to Tower Bridge in 1947 and then in 2015: 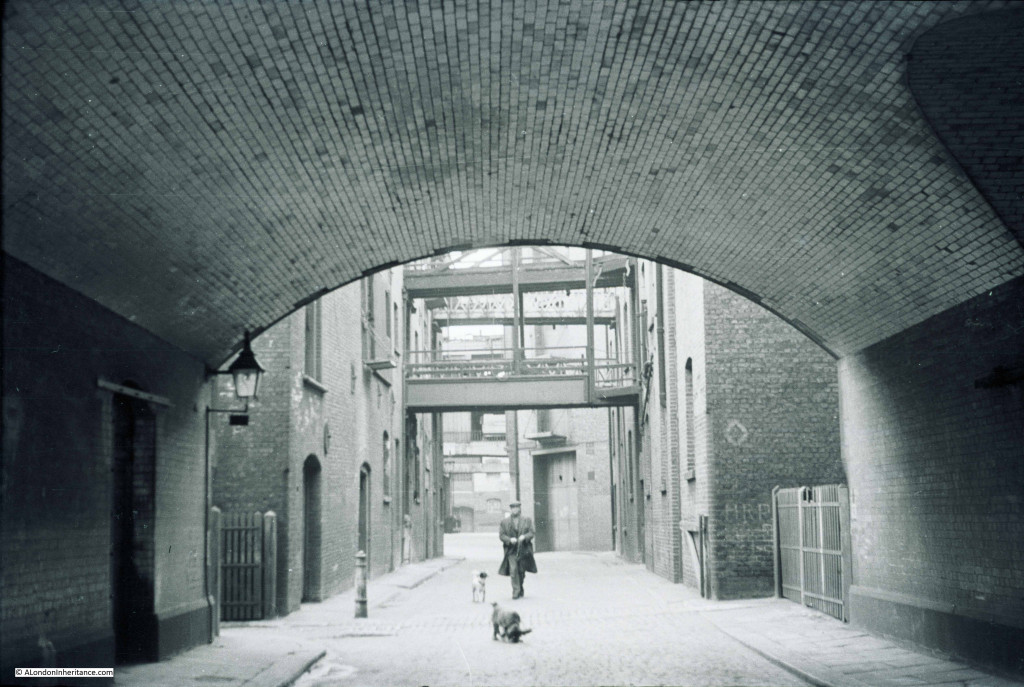 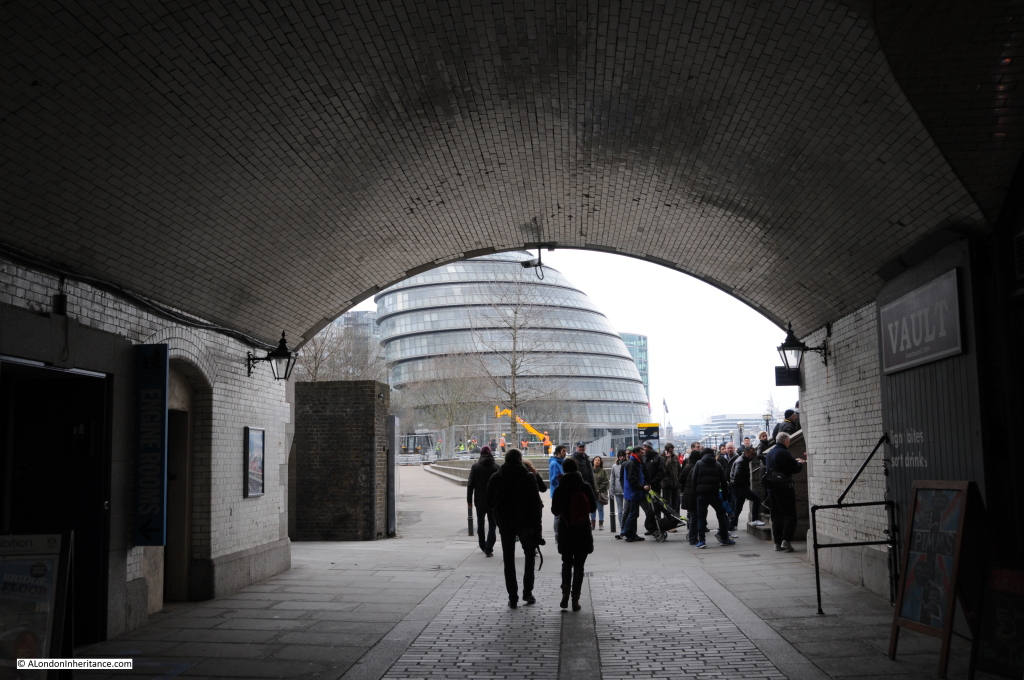 These two photos really show how London has changed in the intervening 68 years.

In 1947, shipping was still coming this far up river to be loaded and unloaded at the warehouses that ran the length of the river. The warehouses on the right were facing onto the river, walkways over the street lead to further warehouses.

Pickle Herring Street in the 1947 photo is the street winding through the warehouses, it had been here for many years but has now disappeared along with all the warehouses lining this stretch of the Thames in the redevelopment of this area of the south bank for City Hall (the building that appears to lean backwards in the 2015 photo), the home of the Mayor of London and the Greater London Authority, along with the public open space created up to Tower Bridge.

Instead of the solitary Londoner walking his dogs we now find the thousands of tourists who follow the walkway along the river and cross to and from the north bank and the Tower of London via Tower Bridge.

It took a while to take the 2015 photos, I was waiting until there were not too many people in the tunnel, such is the popularity of this area even on a chilly March morning. Not long after I took the photo, an ice cream van arrived and parked to the left of the tunnel entrance. I wonder what the man in the 1947 photo would have thought about how London would be changing over the coming decades.

The change was such that I was still slightly unsure that this is the correct location of the 1947 photo, so I checked the tiling on the roof of the tunnel. The following photos show that even across 68 years the same defects and damage to the tiling can be found. 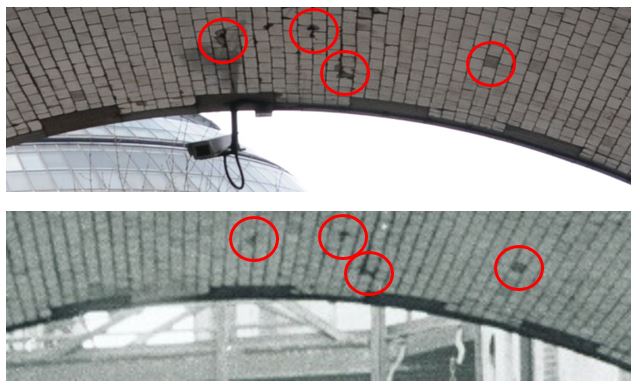 In the following map from the 1940 edition of Bartholomew’s Reference Atlas of Greater London I have marked the location from where the photograph was taken with a red dot.

The tunnel is directly underneath the approach road to Tower Bridge and Pickle Herring Street is seen running to the left: 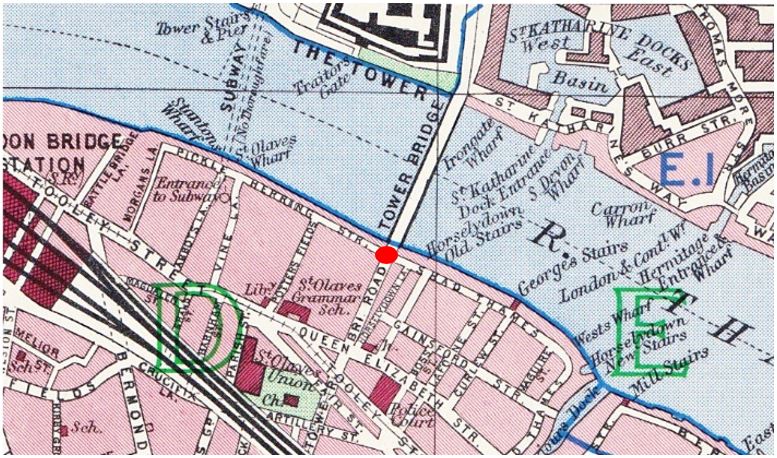 The following early 19th century map extract shows the area prior to the construction of Tower Bridge. There was also a Pickle Herring Stairs roughly where St. Olaves Wharf is shown in the 1940 map. Note also Horslydown Old Stairs. This is where Tower Bridge would be built later in the 19th century. 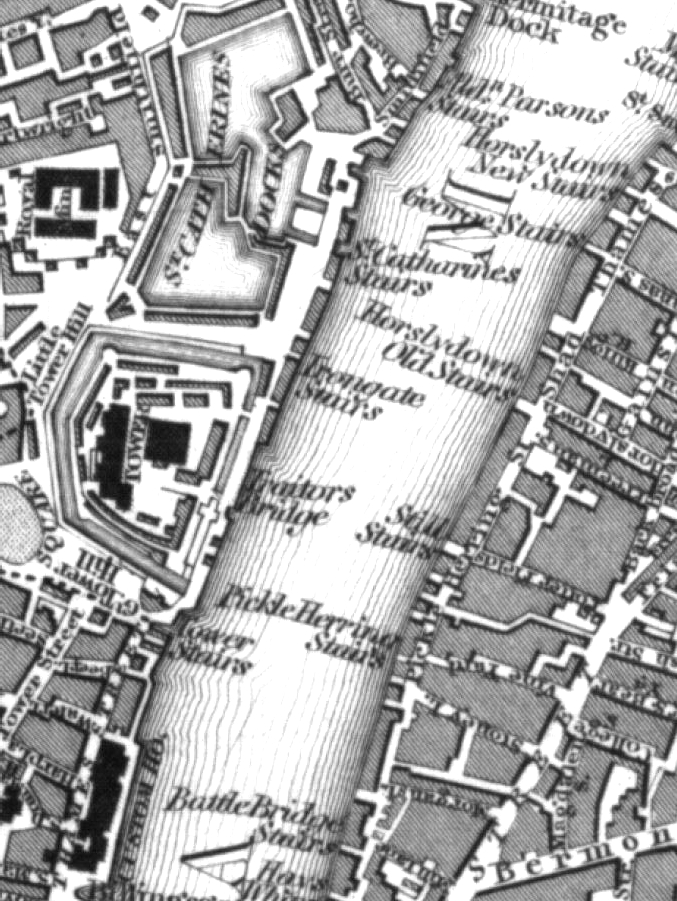 Despite having such an interesting name, I have not found that many references to Pickle Herring Street. The name must refer to the landing and storage of pickle herrings here at some point in the past.

Old and New London, published in 1878 describes the area:

“Indeed from Morgan’s Lane – a turning about the middle of Tooley Street, on the north side, to St. Saviour’s Dock, the whole line of street – called in one part Pickle Herring Street, and in another Shad Thames – exhibits an uninterrupted series of wharves, warehouses, mills and factories, on both sides of the narrow and crowded roadway. The buildings on the northern side are contiguous to the river, and in the gateways and openings in these we witness the busy scenes and the mazes of the shipping which pertain to such a spot. “

The buildings would be exactly the same in 1947.

Gustave Doré visited the area in 1872. The following is his illustration of Pickle Herring Street for the publication, “London – A Pilgrimage”: 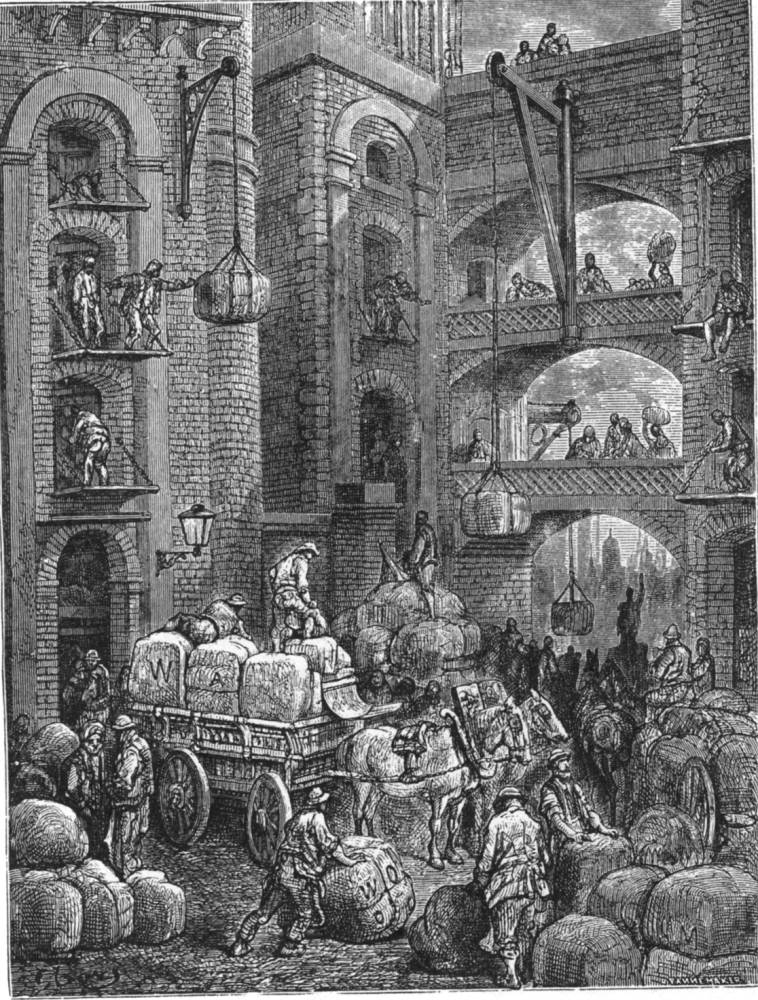 Doré probably used some artistic license in this drawing, the buildings look rather too finely built for riverside warehouses, however it probably does give a good impression of the atmosphere in Pickle Herring Street at the time.

Return to the dot in the above map, turn to the right and you will be looking down Shad Thames. This was the scene in 1947 looking down to the next stretch of warehousing running the length of the river. This was Butlers Wharf. 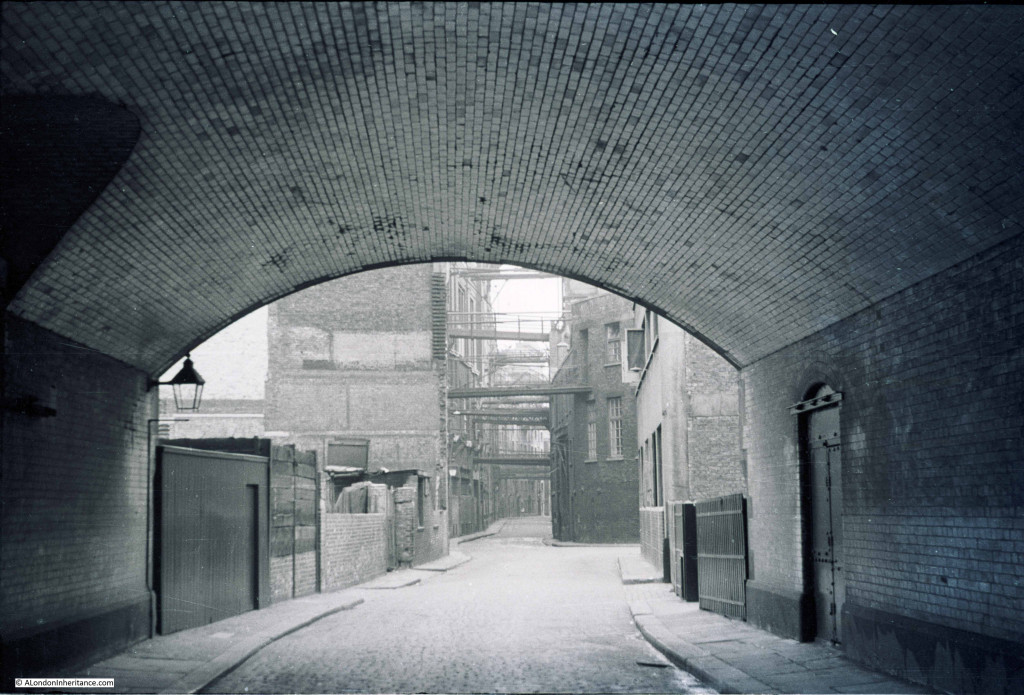 In 2015 Shad Thames remains as does Butlers Wharf, although converted into luxury flats, restaurants and shops, again indicative of the changes across much of central London. 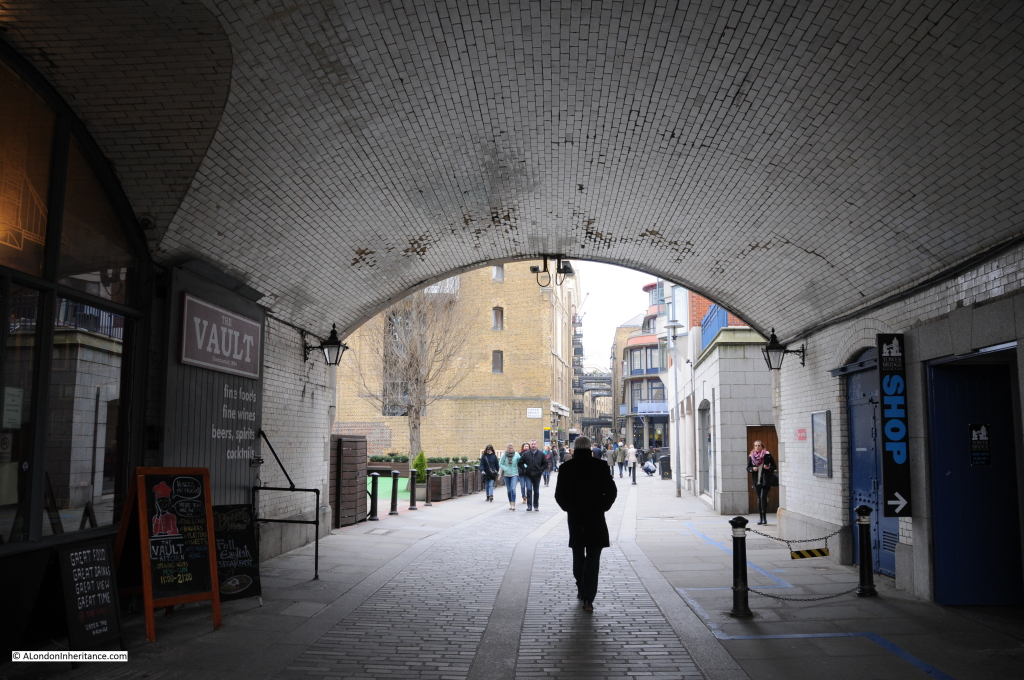 The excellent Britain from Above website has the following photo of the area, also take in 1947.

The warehouses on either side of the approach road to Tower Bridge can clearly be seen along with the cluster of shipping and barges up against the warehouses along Pickle Herring Street. 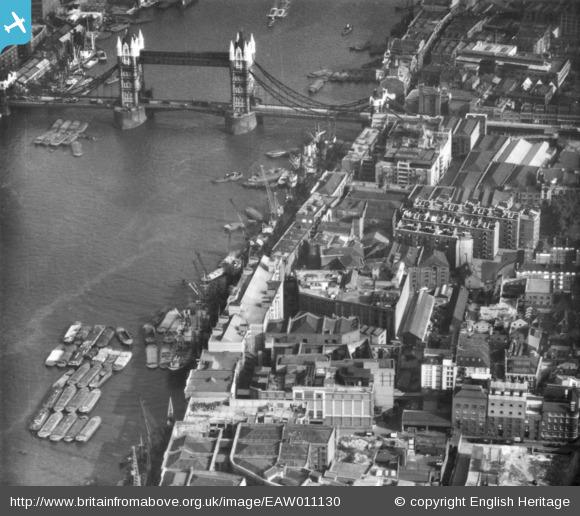 I stood for a while in the tunnel waiting to take the photos, in exactly the same place as my 18 year old father back in 1947, under the same tiled roof, but looking out on a very different world.

40 thoughts on “The Lost Warehouses of Pickle Herring Street”