I have been travelling and working outside of the country for some of the last two weeks, so my apologies that this is a rather brief post.

Long before the docks running east along the River Thames from Tower Bridge were built, the docks of London lined the river in the heart of the City. Large ships could only travel as far as London Bridge, so to get to the warehouses further west along the river, goods had to be moved onto barges which could then travel underneath the bridges.

As the size of ships and the number visiting London grew, the London Docks, West India Docks, Royal Victoria Docks etc. diverted trade from the centre of the City, however the warehouses along the river west from Tower Bridge continued on until gradually closing during the last decades of the 20th century.

There were a large number of warehouses lining the river between Southwark and Blackfriars Bridges and some of my father’s photos show one of these warehouses in action.

This was the view, looking west from Southwark Bridge. The Vinter’s Company Hall is on the extreme right of the photo and just past this is a barge being unloaded with sacks being carried by crane into the warehouse. 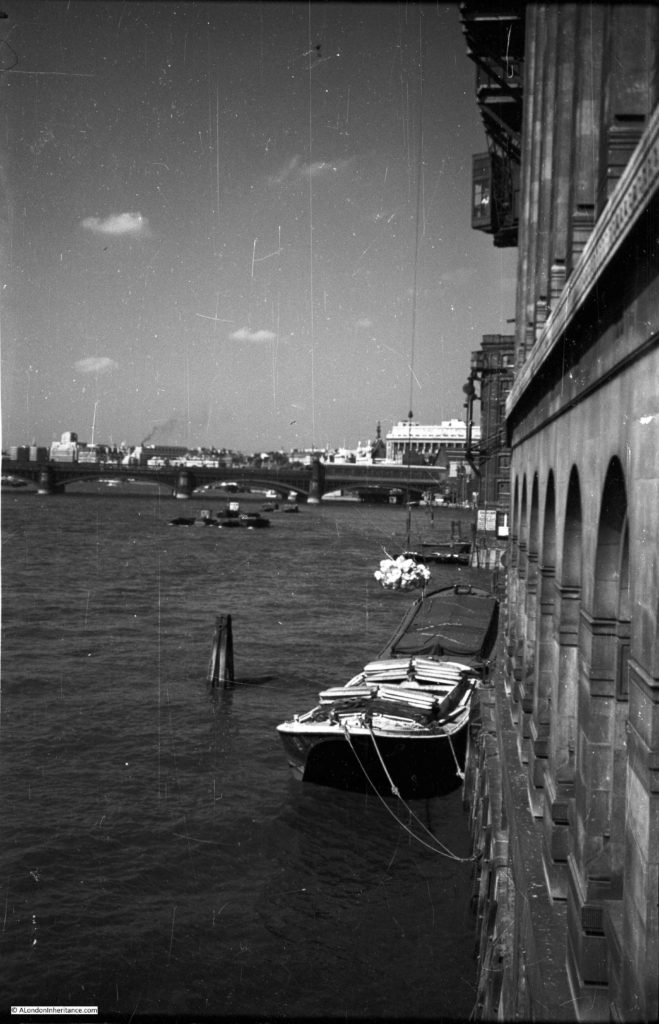 To save space, the cranes were generally mounted on the side of the warehouse. Barges would be taken alongside and goods transferred to and from the barge. If you look to the top right, the control cabin of the crane can be seen along with a man in what appears to be a white shirt operating the crane.

This is the same scene today. The riverside facade of the Vinter’s Hall was rebuilt in the 1990’s. In the distance, the curved Unilever House can be seen on the right and on the left, Shell Mex House. 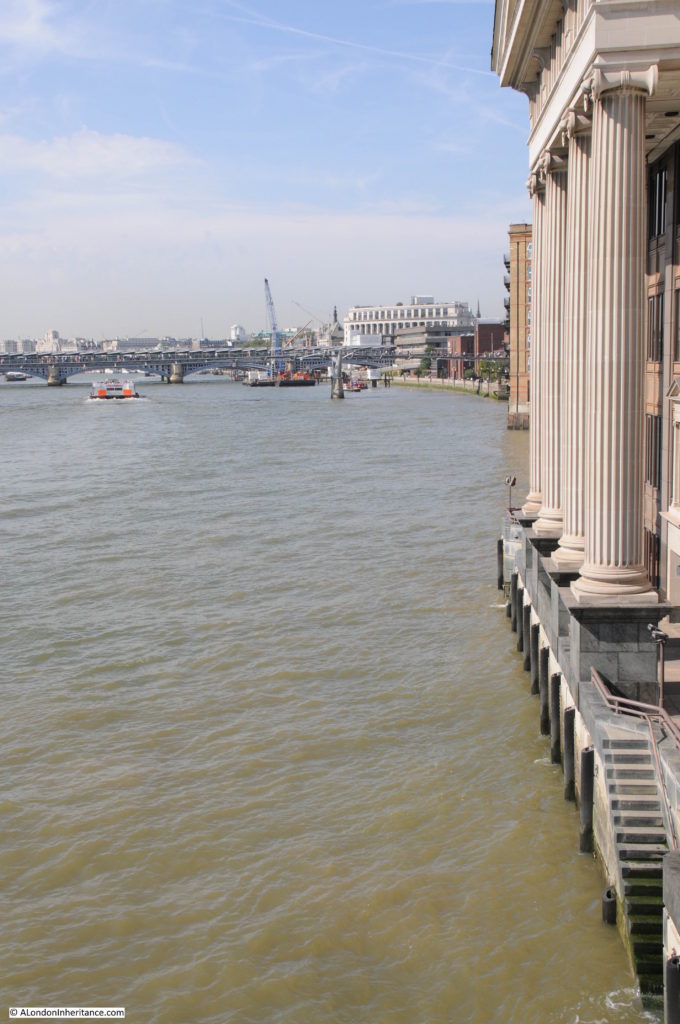 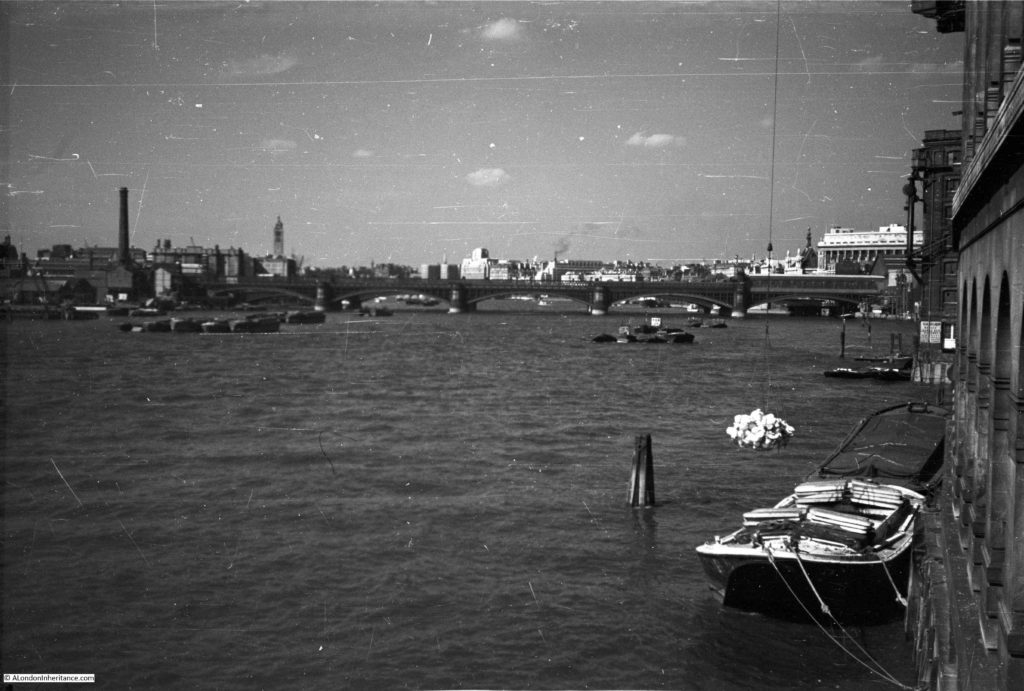 This is the same view today. The Oxo Tower is still there, but is hidden behind the developments on the south bank. 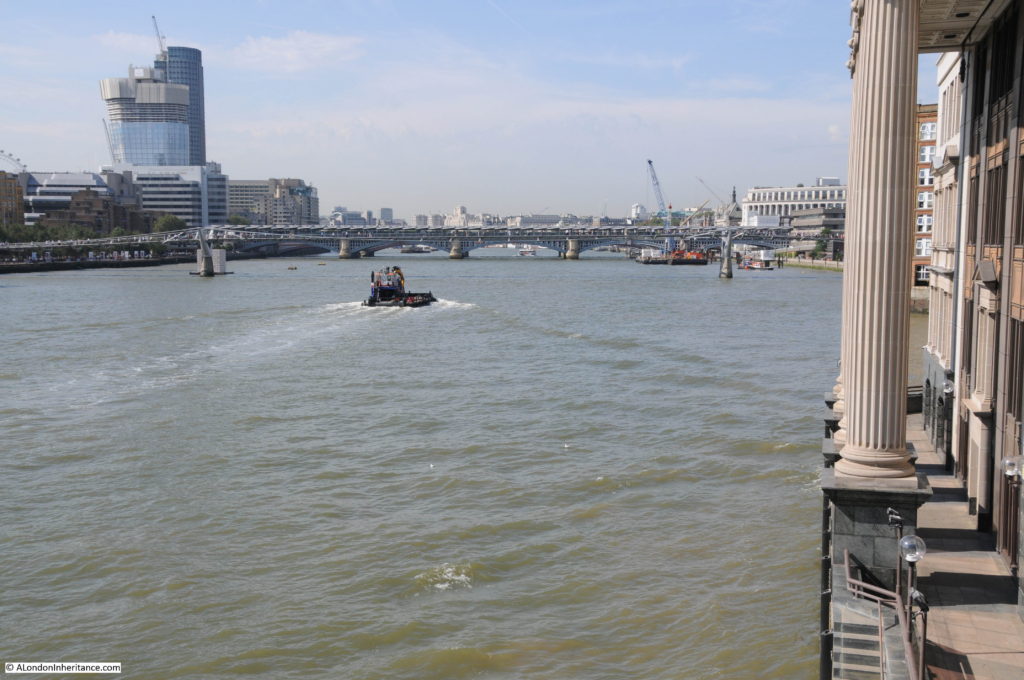 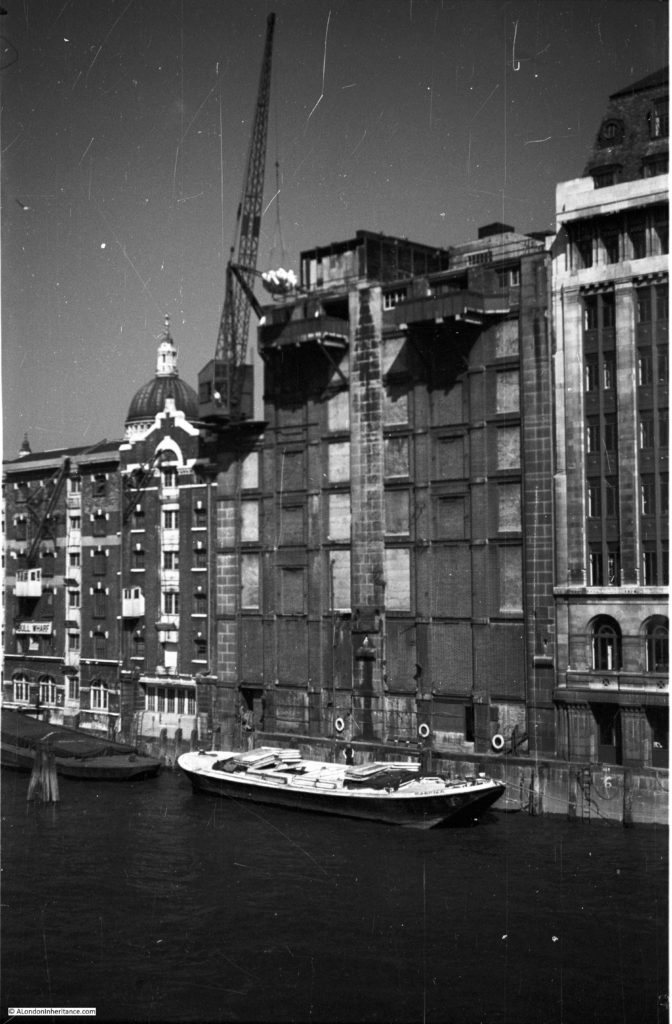 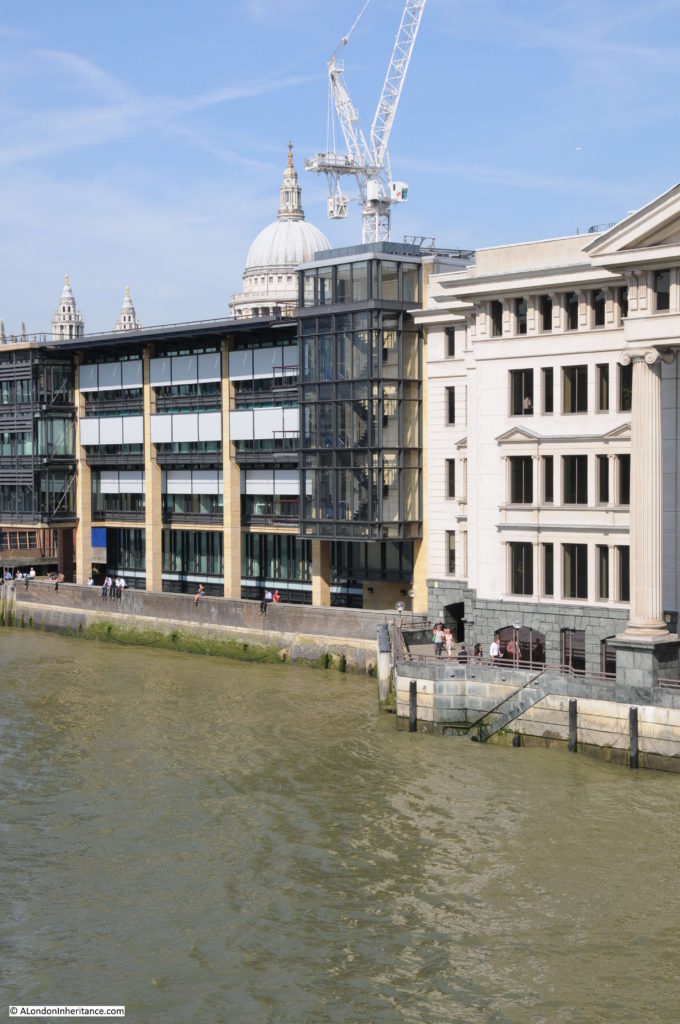 Although very little is left of the old warehouses that once covered so much of the banks of the river, if you look down on the river edge at low tide, you can often see large areas of white chalk. To provide a stable and flat surface on which the barges could settle at low tide whilst moored alongside the warehouse, chalk was compacted into the surface of the river bank.

Reading accounts of the river during the 18th and 19th centuries, it is hard to believe that the river was once so busy. A couple of prints from the British Museum show an amazing number of vessels and considerable activity on the river. It was the high number of ships, growth in the size of ships and lack of warehouse and mooring space along the river in the heart of the city that resulted in the development of the large docks east of Tower Bridge in the 19th century. 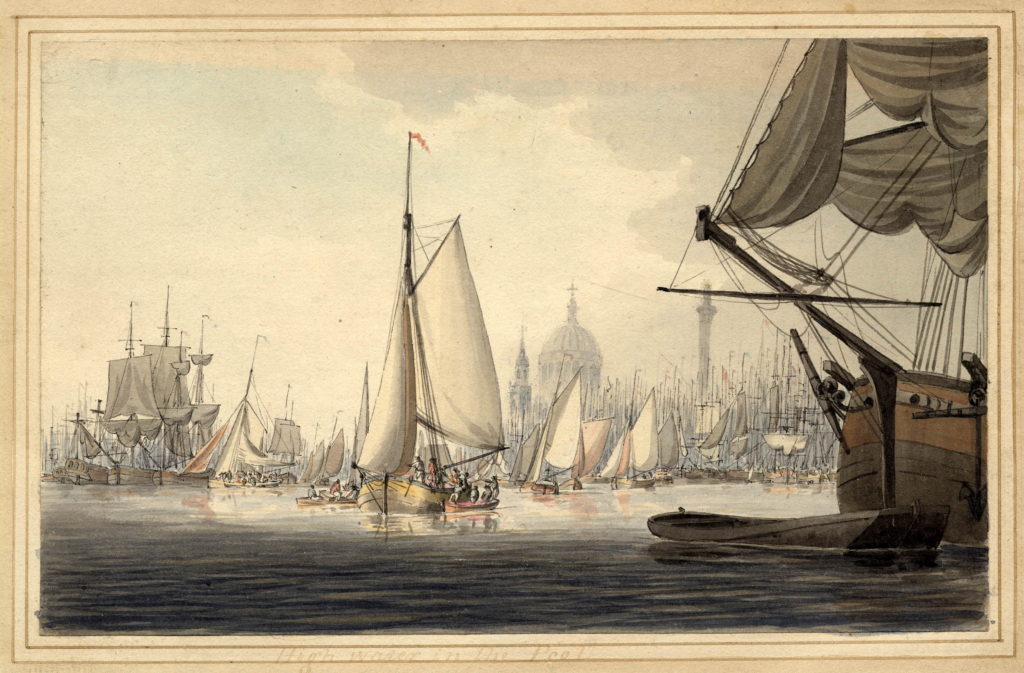 This print from 1841 shows London Bridge with Southwark Cathedral on the left and the Monument on the right. 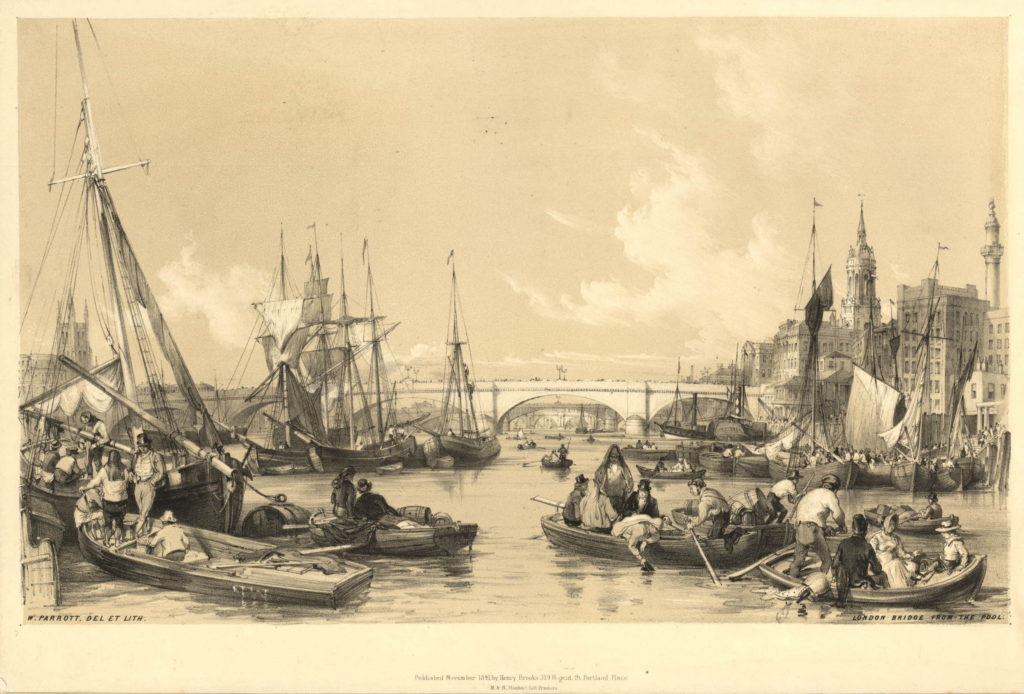 A few weeks ago I was contacted by David Smith whose mother had taken a number of photos in London during the early 1960s.

They are all in colour and provide some fascinating views of the city and I am very grateful to David for letting me publish some of them.

The following photo is of the warehouses just a bit further along the river towards Blackfriars Bridge. In the background is St. Paul’s Cathedral with the dome covered in scaffolding – I have not seen a photo of this before. 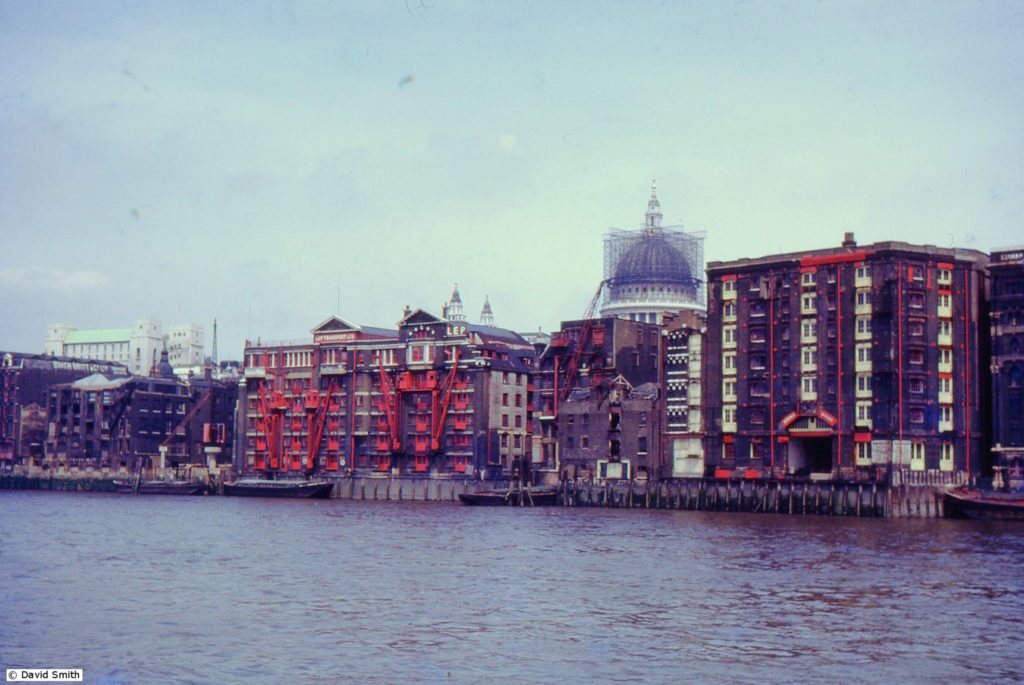 The warehouse on the left with the four red cranes and red doors and windows is the Sunlight Wharf of the LEP Company and LEP Transport Ltd.

When the LEP warehouses were redeveloped in the 1980s, the LEP Group published a fascinating history of the area on which the warehouse had been built. The book provides an insight into the operation of the warehouse:

“The four swinging cranes at Sunlight Wharf served an incessant queue of barges maneuvering for a position at the wharf. Cargoes varied from animal pelts to Polish onions, which were unloaded straight out of the barges into hinged flaps outside the doors of the appropriate floor of the warehouse. The fifth floor of the warehouse remained exclusively offices, the other floors were used for storage and as a Bond warehouse. After the Second World War the scene changed, the number of barges diminished and the ten ton Butters crane replaced the four swinging cranes. This could cope with a greater load and could unload straight from a barge into a waiting vehicle. It was for many years the only – and the last – working crane on the City’s riverfront. It was dismantled in January 1983, defeated by containerisation. Likewise Sunlight Wharf had the distinction of being the last wharf operating as such in the City.”

The Butters crane is the one immediately to the left of the LEP Sunlight Wharf buildings.

I took the following photo of the crane and Sunlight Wharf buildings just before demolition. I was walking along the new White Lion Hill which had been constructed as part of the development of the area to lead down from Queen Victoria Street to the Embankment. See here for the full post and photos of the area and excavations of Baynard’s castle. 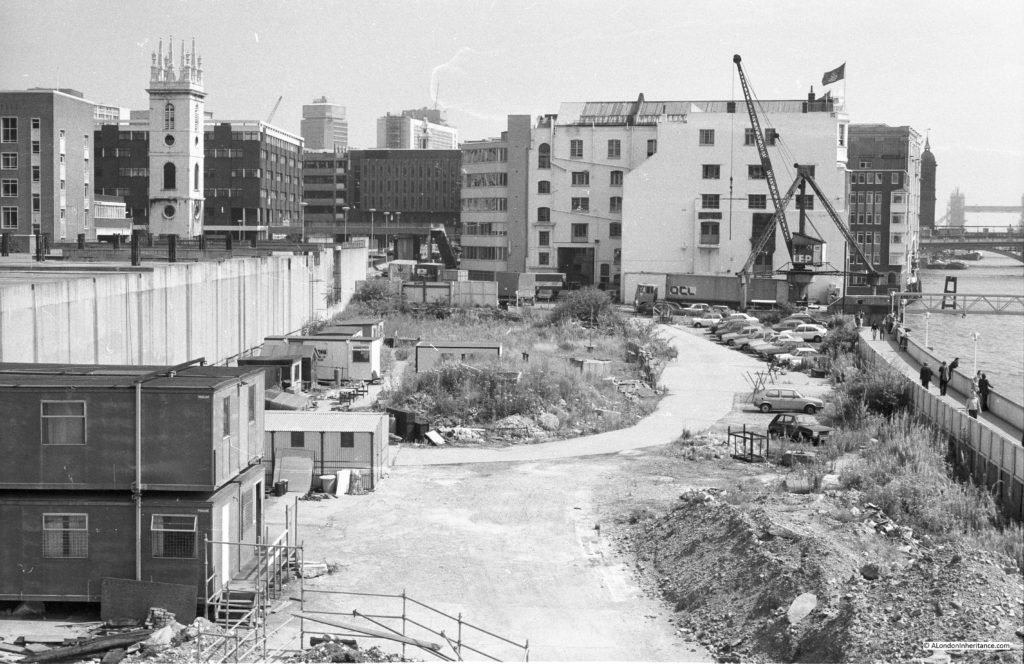 Included in the photos that David sent was the following taken from Tower Bridge. Note the cranes along the southern bank of the river and the large ship docked on the right of London Bridge. 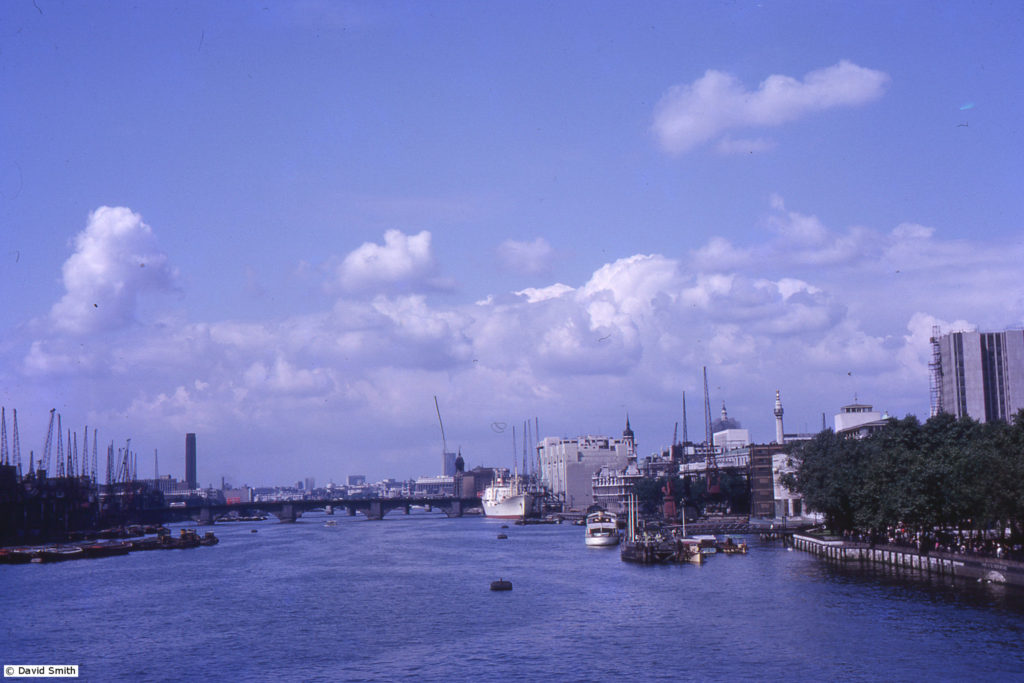 And the following view from London Bridge. The cranes on the right are along the warehouses that backed onto Pickle Herring Street. 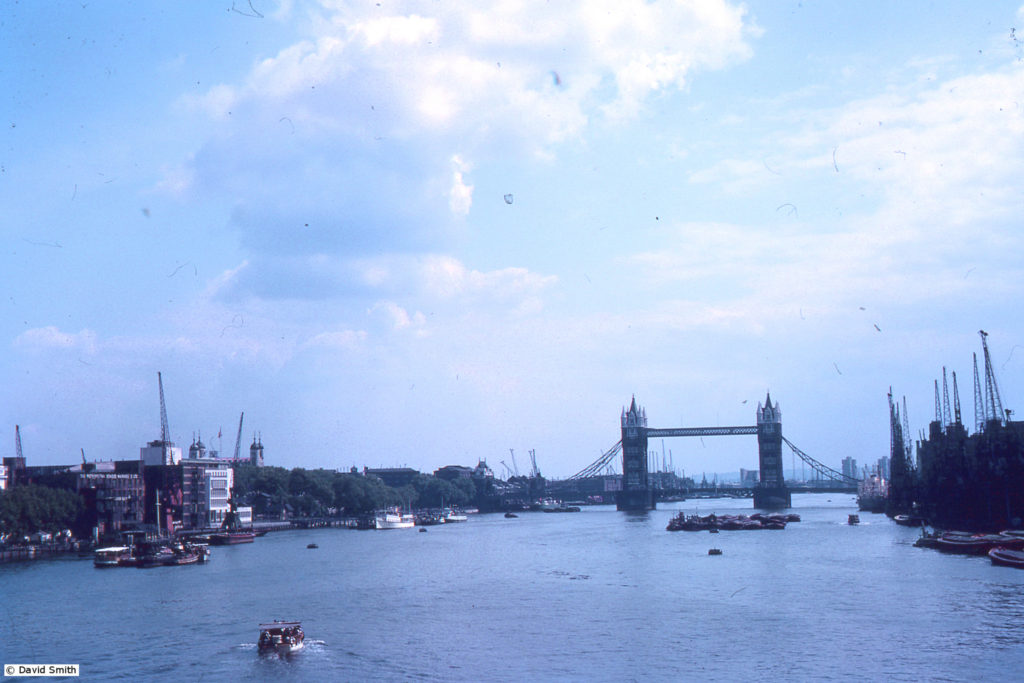 Another view, again showing the size of ship that would moor in this stretch of the river, alongside the warehouses at Pickle Herring Street. 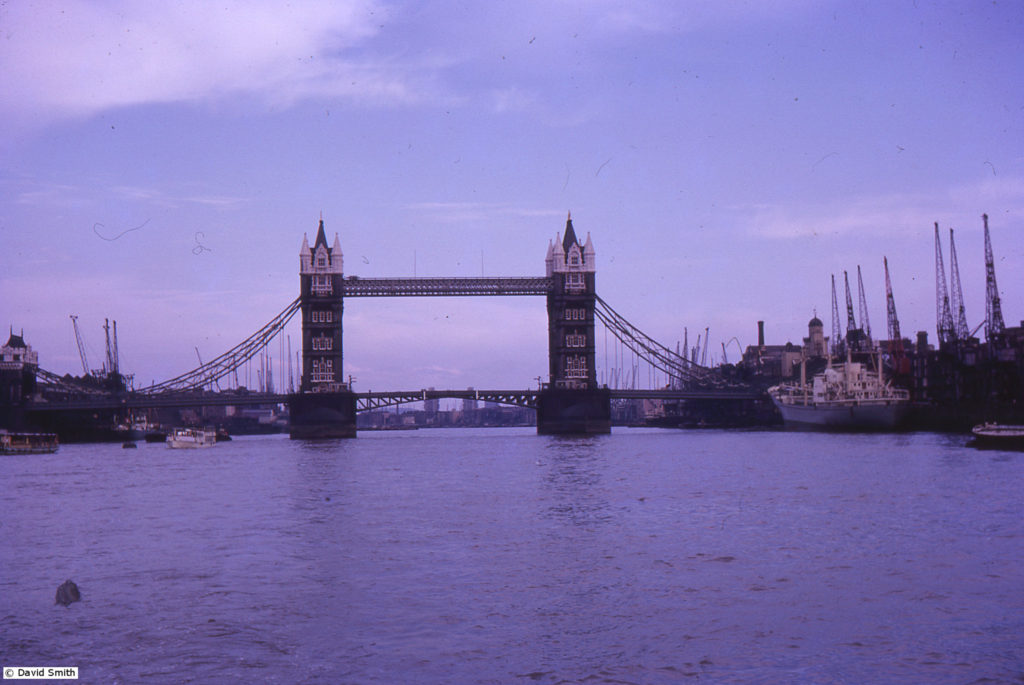 The cranes along this stretch of the river have long gone. Some of the old warehouse buildings still survive, but now serve other purposes. The majority of the docks east of Tower Bridge have also closed apart from Tilbury Docks as the size of ships continued to grow along with the large areas of land needed for container storage. I hope to cover the London Docks in far more detail in the future.

My thanks again to David Smith for letting me see and publish some of his mother’s photos.

I mentioned at the start, that this is a brief post as I have been travelling for work over the last few weeks. I flew back into Heathrow one evening last week and had a window seat on the right side of the plane as the route was over the south of London providing a fantastic view of the city on a clear night.

Flying over London provides a wonderful opportunity to see the layout of the city, the river, rail tracks, buildings etc. and at night the city looks fantastic. Whilst the majority of other passengers seemed oblivious to the view of London, I had my eyes and phone pressed against the window taking photos as the plane flew over south London, and consolidated the photos into the following video.

The view starts with the river and Tower Bridge as well as the dark thin line of the very straight rail track into London Bridge station, flying to the west and the red lit London Eye and ending with Chelsea Bridge and the dark of the park in front of the Royal Hospital Chelsea.

In centuries past, travelers to London from abroad would have traveled up the Thames and landed at one of the many steps along the river. Now they fly over the city and land to the west.