I first started walking London in the very early 1970s when as children we had family walks exploring the city. We were too young to appreciate exploring a London that would soon be changing so dramatically, so probably to try and keep our interest my father would tell stories of some of the myths and legends of where we walked, including tales of the ghosts of London that haunted many of the locations we passed.

Many of the locations that would be expected to have ghost stories associated with their history do not disappoint. The Tower of London has several reported apparitions. Lady Jane Grey seems to be the most frequent having been seen in the Bloody Tower as a long-haired woman dressed in a long black velvet dress with white cap and in the Salt Tower where she was seen as a white shapeless form. Anne Boleyn has been allegedly seen in the White Tower and on Tower Green. A bear has also been seen by some of the military inhabitants of the Tower, perhaps a survivor of the time when the Tower was used as a menagerie. Sir Walter Raleigh’s ghost has also been reported near the Bloody Tower.

Westminster Abbey has the ghost of a monk gliding some distance above the floor, presumably due to changes in floor level due to alterations to the Abbey over the centuries. In the Deanery the ghost of John Bradshaw, president of the court which condemned Charles the 1st has been seen.

There are also many stories of ghosts in the more unexpected locations.

So, as we reach the shortest days of the year, when the long cold nights open the imagination to the more mythical aspects of London, join me on a walk across the city to hunt down some of the ghosts of London. Characters that do not make much of an appearance now with the bright lights, noise and pace of the city crowding out the more fleeting visions of past lives.

Belgravia is our first stop. Find Wilton Row, just off Wilton Crescent and almost at the end of this hidden street is the Grenadier. 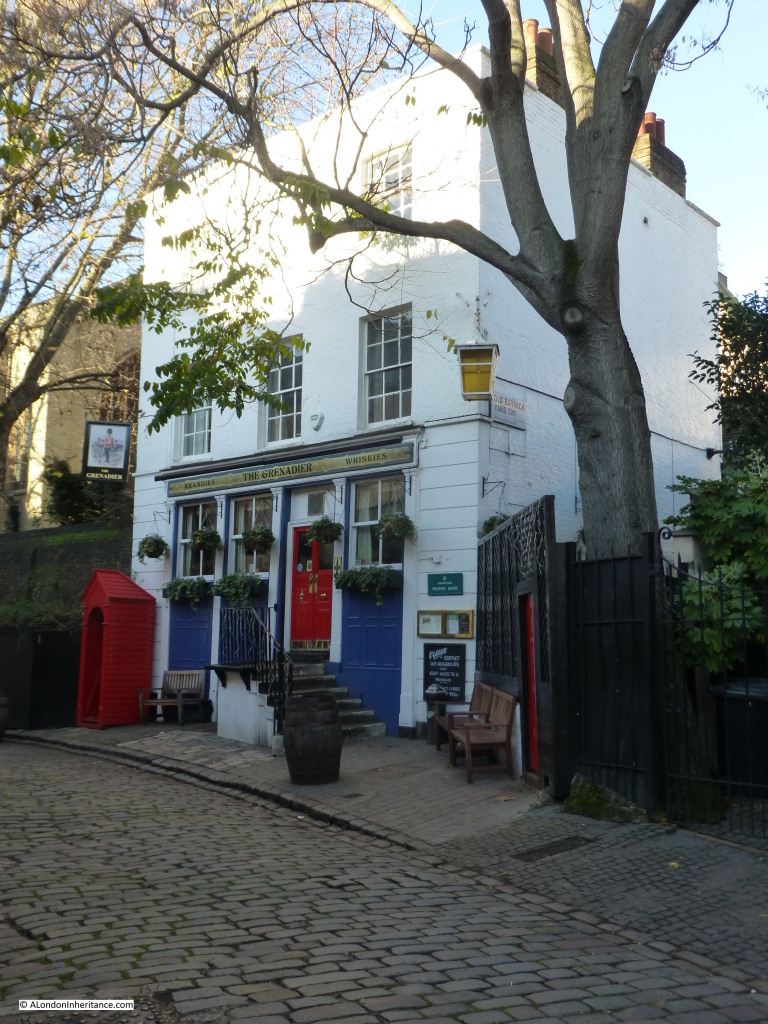 The Grenadier has been a pub since 1818 but was originally the Officers Mess of the First Royal Regiment of Foot Guards and was built-in 1720.

The pub is proud of its supernatural heritage, allegedly being haunted by the ghost of Cedric, a young Grenadier who was apparently beaten to death by his comrades after being found cheating at cards. Apparitions, footsteps, noises and an icy chill have all been reported by both landlords and visitors to the pub over the years.

Well worth a visit, even if you are not lucky enough to witness one of Cedric’s manifestations.

Now take the short walk up to Hyde Park Corner Underground Station and take the Piccadilly Line to Covent Garden Underground Station where as you queue for the lifts, or regret the decision to take the stairs, you may meet the ghost of the actor William Terriss who was murdered outside the Adelphi Theatre in 1897, but for some unknown reason started haunting the underground station in 1955. 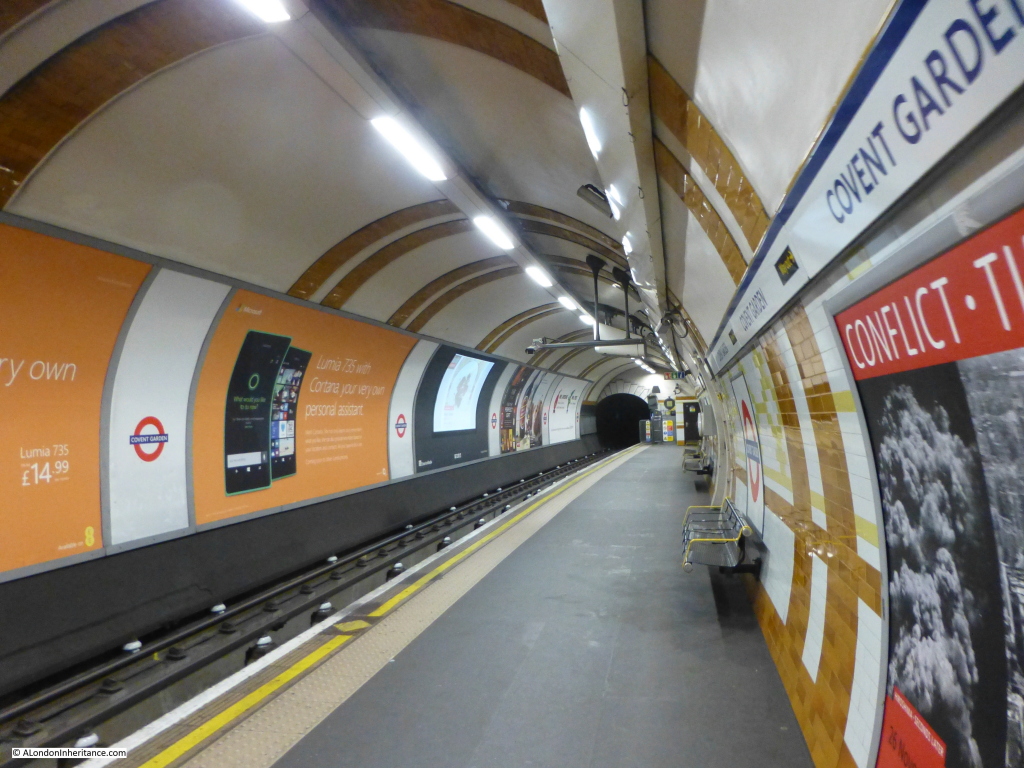 In November 1955 the foreman ticket-collector was in the staff room of the station. He recalls that:

“the door was open and in the other section of the room there appeared the figure of a tall man, grey of face and wearing white gloves”

He assumed it was a passenger and asking if he could help, the figure silently turned and disappeared behind a partition. A week later, another station employee was found shaking with fear announcing that he had seen a ghost, claiming ” he stood in front of me and put his hands on my head”

A séance was later held at the station and the ghost claimed to be the Victorian actor William Terriss. He was seen many times later on the platforms, passageways and emergency stairs of the station, along with station workers hearing phantom footsteps and feeling an icy chill. 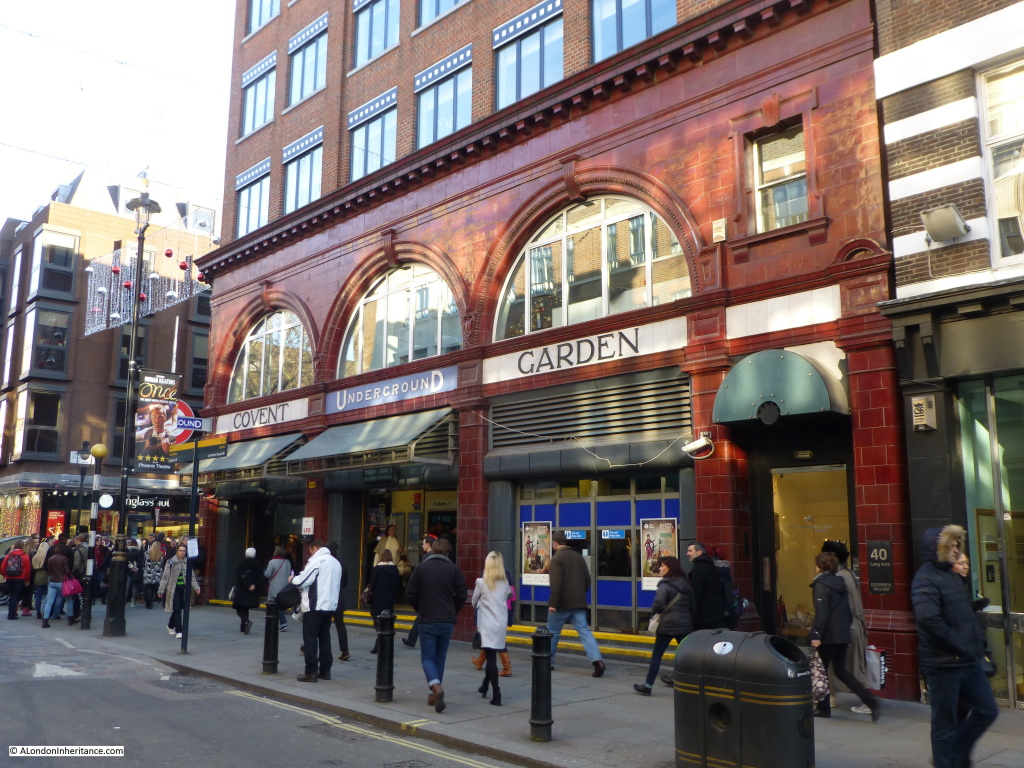 William Terriss was stabbed by a fellow actor as he entered the stage door of the Adelphi Theatre. The murderer, Richard Prince was jealous of the popularity of Terriss. Whilst he was found guilty, he was also diagnosed as insane and died in Broadmoor.

There is a plaque to William Terriss at the rear of the Adelphi in Maiden Lane. 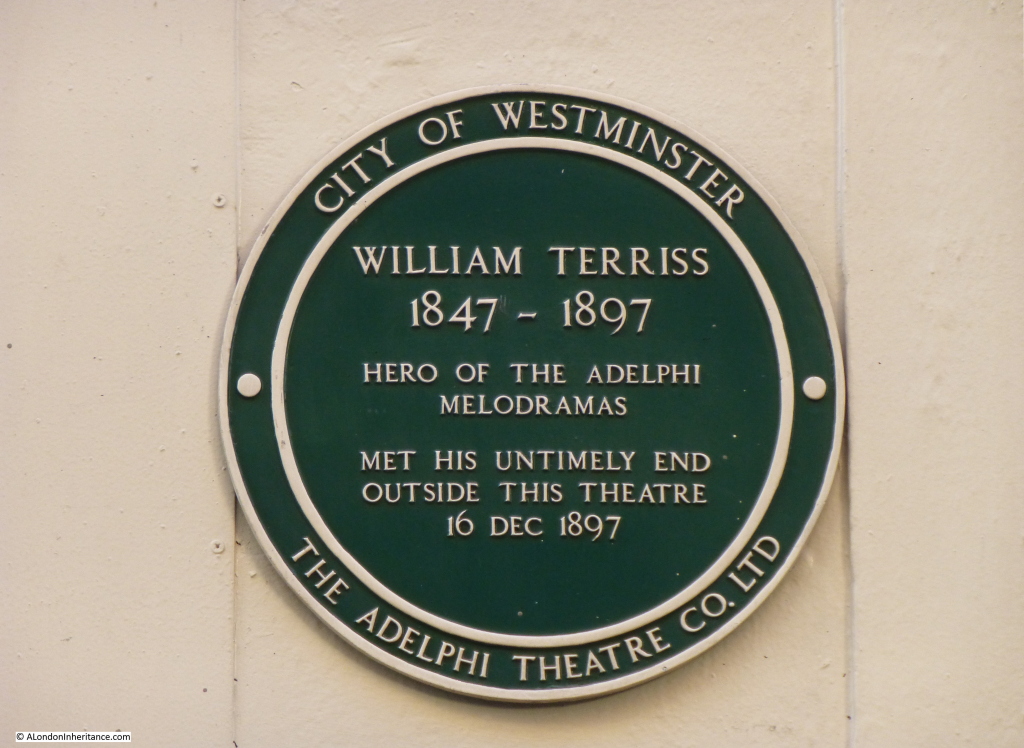 The rear of the Adelphi, it was here that William Terriss was murdered. He is also said to haunt the theatre, but why he should be haunting the Covent Garden Underground Station rather than just the scene of his murder remains a mystery. 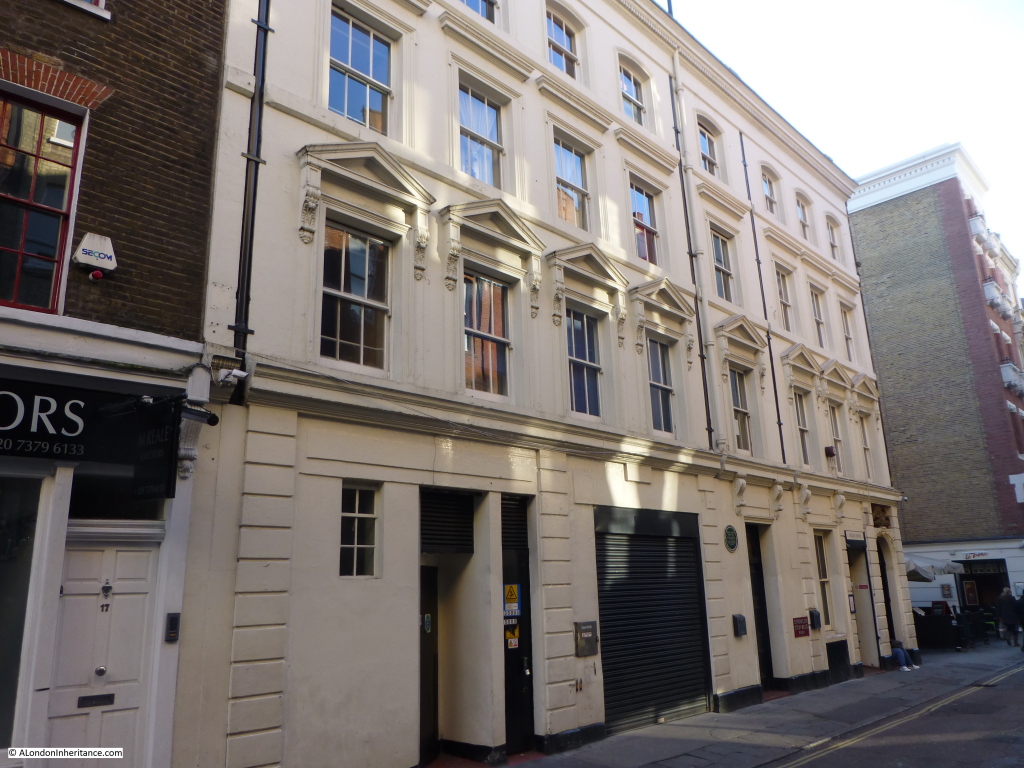 The next stop is the Theatre Royal, Drury Lane, (which although includes the name Drury lane, the main frontage is actually on Catherine Street) which has no less than three possible ghostly inhabitants. The first, and perhaps best authenticated is a “man in grey” who appears between the hours of 9am and 6pm, not the typical hours for a ghostly appearance. The ghost has been seen many times over the years by actors working at the theatre including Harry Secombe who was appearing in The Four Musketeers in the early 1960s. He said “the whole ruddy cast saw him once. He always made his appearance before 6pm and then popped off again. Haunting to rule, I suppose.”

The identity of the man in grey is a bit of a mystery. Possibly that of the actor Arnold Woodruffe who was killed by Charles Macklin some 200 years ago in a burst of anger. When the theatre was rebuilt around the 1850s a small room was found which contained the skeleton of a man with a dagger in his ribs. His identity was never found, and he is also one of the possible candidates for the man in grey.

Other ghostly appearances at the Theatre Royal have been a man with a long white-painted face who was occasionally seen sitting behind people in the boxes. He was thought to be the famous clown Joe Grimaldi.

The comedian Dan Leno was also allegedly seen at times, but was one of the more infrequent ghostly visitors to the Theatre Royal. 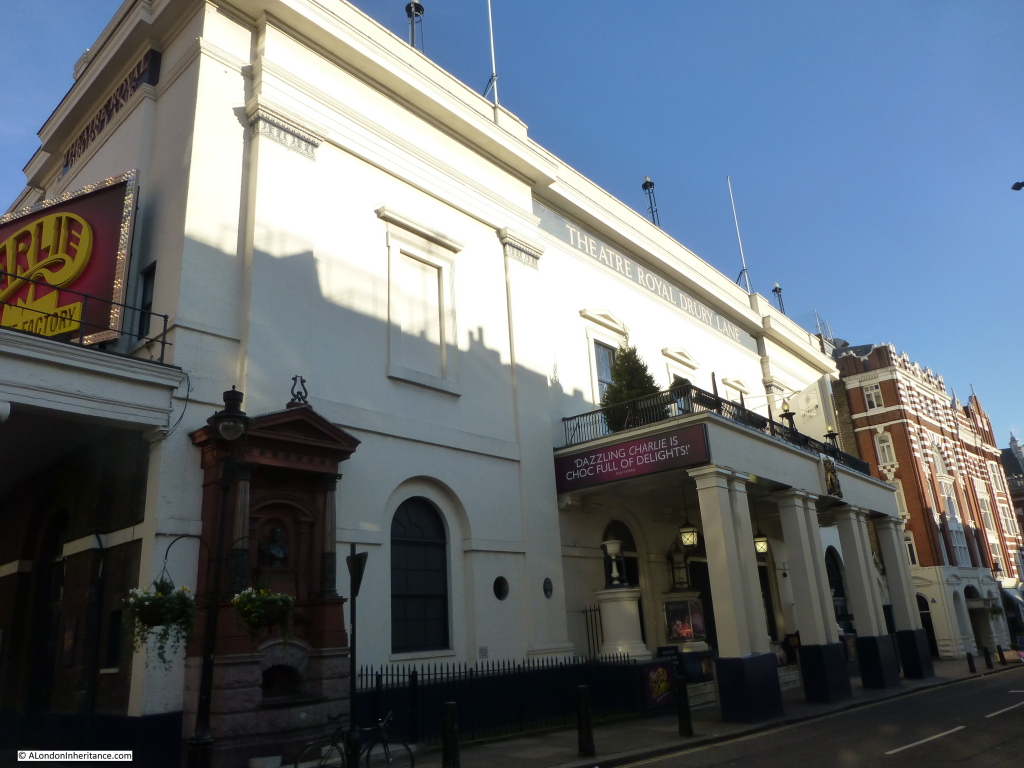 A theatre has been on the site of the Theatre Royal since 1663. The theatre went through several phases of demolition and rebuilding until the present theatre which was built-in 1812.

The colonnade walk alongside the Theatre Royal: 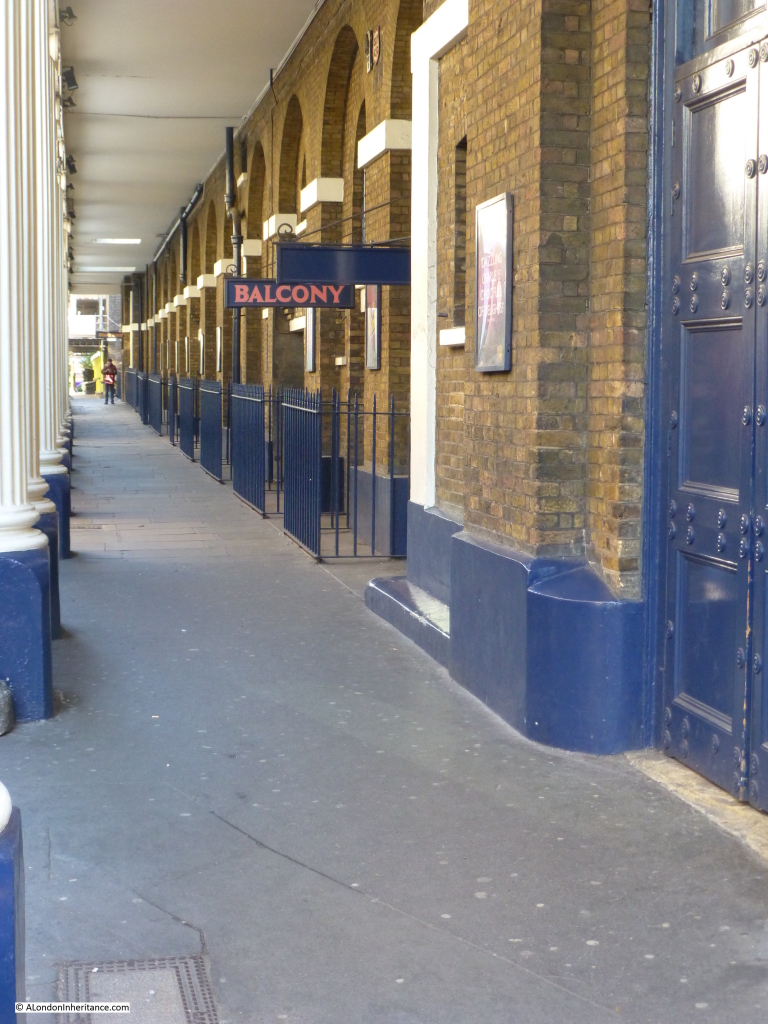 Now we head into the City of London. Walk up Ludgate Hill and just before reaching St. Paul’s turn left into Ave Maria Lane. A short distance along, on the left is Amen Corner and Amen Court. At the far end, through the gateway in the following photo can be seen a wall, the old city wall built on Roman foundations. 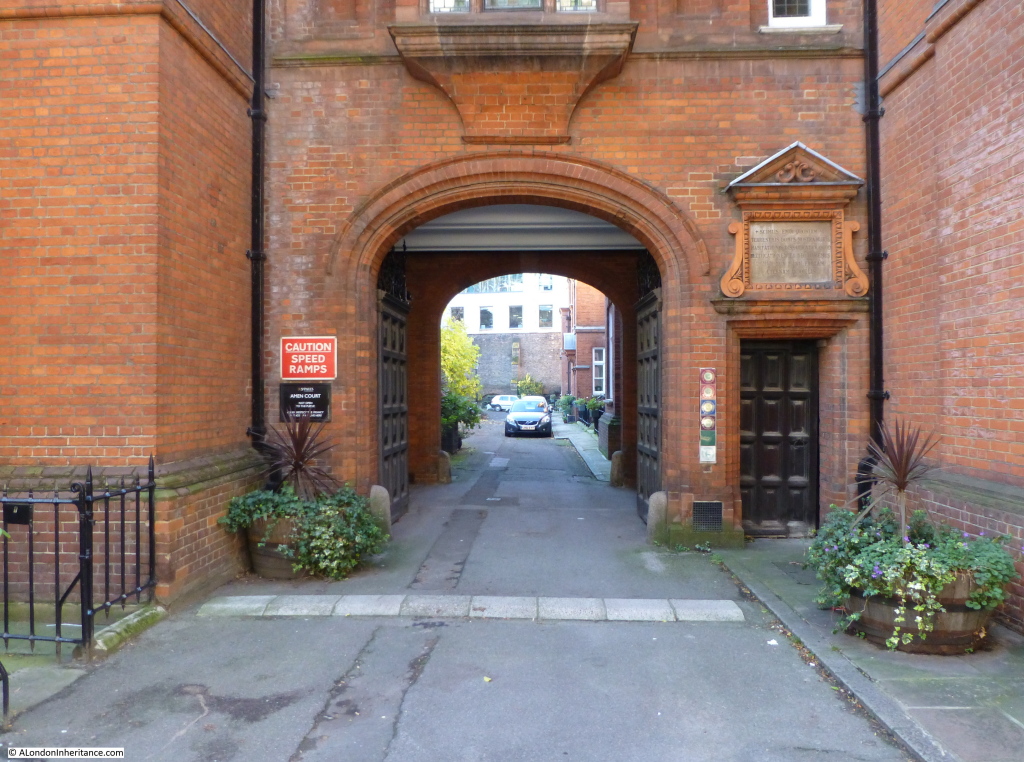 This wall separates Amen Court from Dead Mans Walk where those hanged at Newgate Prison were buried in quick lime. This is a possible explanation for a “Thing” that has been seen at night creeping along the top of the wall. No one has been able to see this vision close enough to identify what it may be.

So when out in London during the dark nights of winter, keep an eye out for the ghosts of London, shadows from London’s past who may still retain a fleeting presence in today’s city.

5 thoughts on “The Ghosts Of London”