The following photo is from the early 1980s and shows part of a terrace of houses. The house on the left with the pediment has a plaque stating “New Terrace – 1791”.  The location is in Islington, a short distance south east of Islington Green. New Terrace, now Duncan Terrace is separated from Colebrooke Row by a strip of grass which has an interesting history. 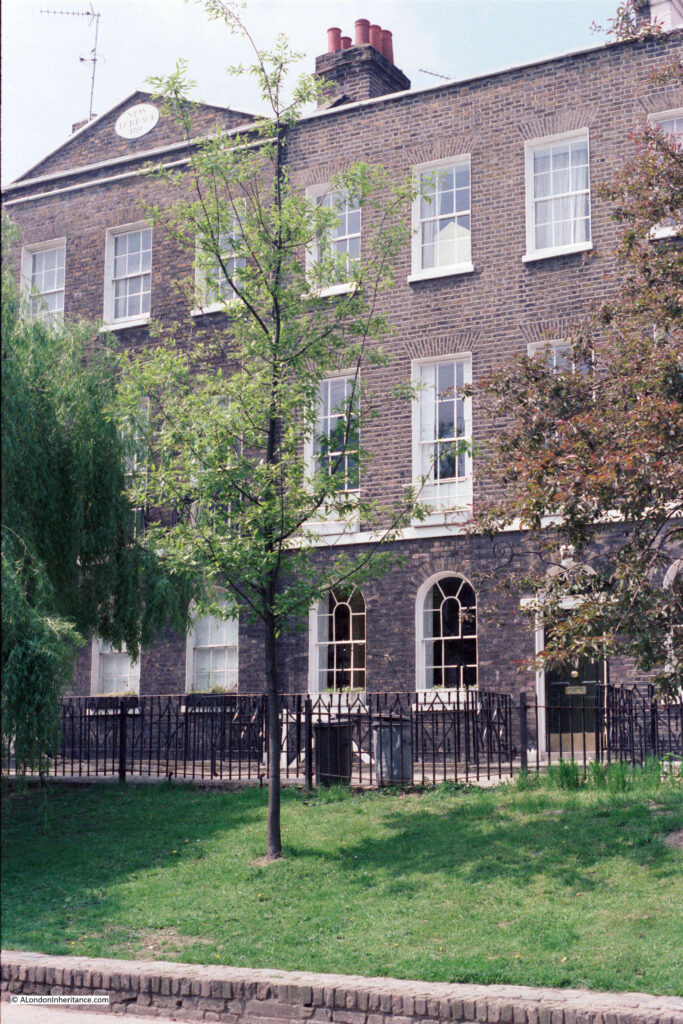 This is the same view almost 40 years later. The perspective is not exactly the same as the trees in front of the house with the pediment have grown significantly and obscure the pediment and plaque when looking from the original viewpoint. 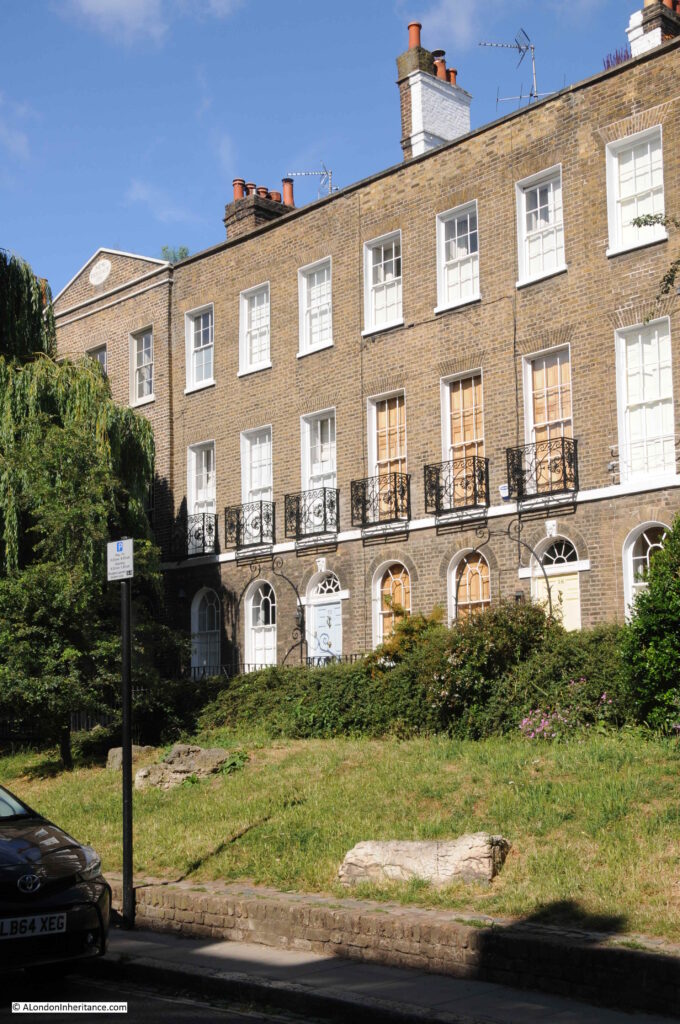 Many of the terraces in this part of Islington were in a poor state in the early 1980s, but the decade would bring a transformation to the area. New Terrace at the time seemed to have escaped the problems suffered by many other terraces and was in good condition as the terrace approached the age of 200 years.

The location of New Terrace is shown in the following map extract. To the south east of Islington Green, the terrace is the upper row of houses in the red oval, north of Charlton Place (Map © OpenStreetMap contributors). 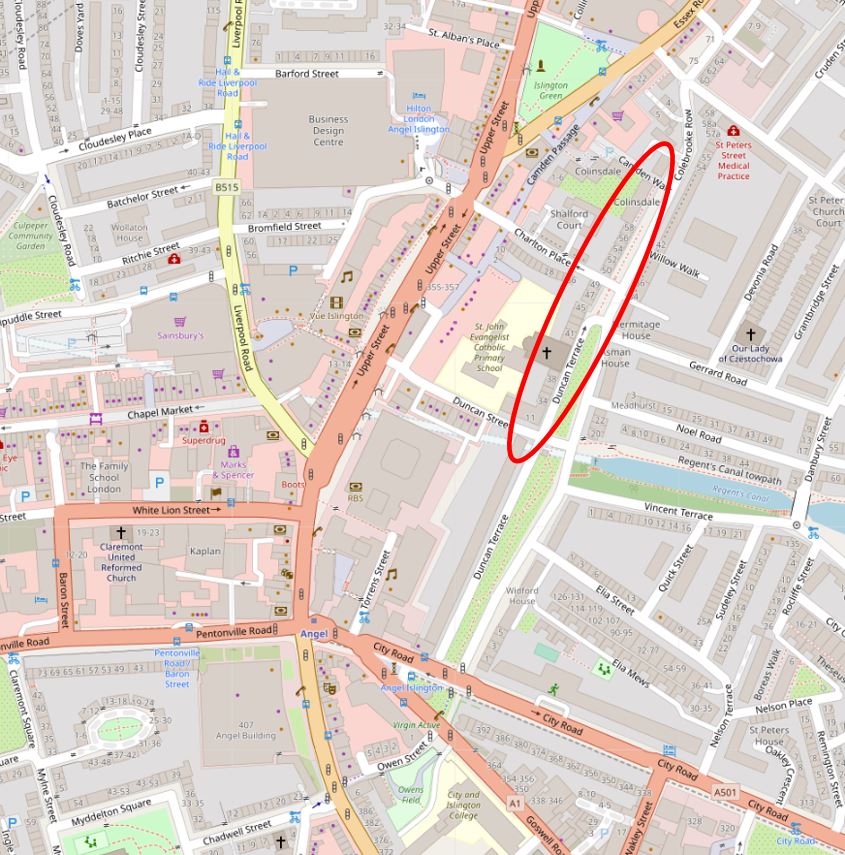 The houses in this area have a complex history, with piecemeal construction starting in the 18th century. Originally, the land was comprised of agricultural fields, clay pits and nursery gardens.

In 1613, the New River was constructed, and the route can still be traced today by the grass strip that runs from New Terrace all the way down to City Road. In the above map, the green strip shows the grass and public park between Duncan Terrace and Colebrooke Row, the grass strip running further north in front of New Terrace is not shown on the map, but is indicated by the gap between the terrace and Colebrooke Row.

Duncan Terrace is named after Admiral Duncan the commander of the Naval Fleet at the Battle of Camperdown against the Dutch in 1797.

New Terrace was built in 1791 by James Taylor, a young surveyor and builder. The terrace has gone through a number of name changes from New Terrace to Colebrooke Terrace, to Duncan Terrace, the name which remains to this day.

The grass strip running in front of the terrace was the route of the New River. The river was enclosed in a pipe in 1861 which was covered and planted. The pipe was out of use by 1950 and was then removed leaving the grass strip as a reminder of the early history of London’s water supply. 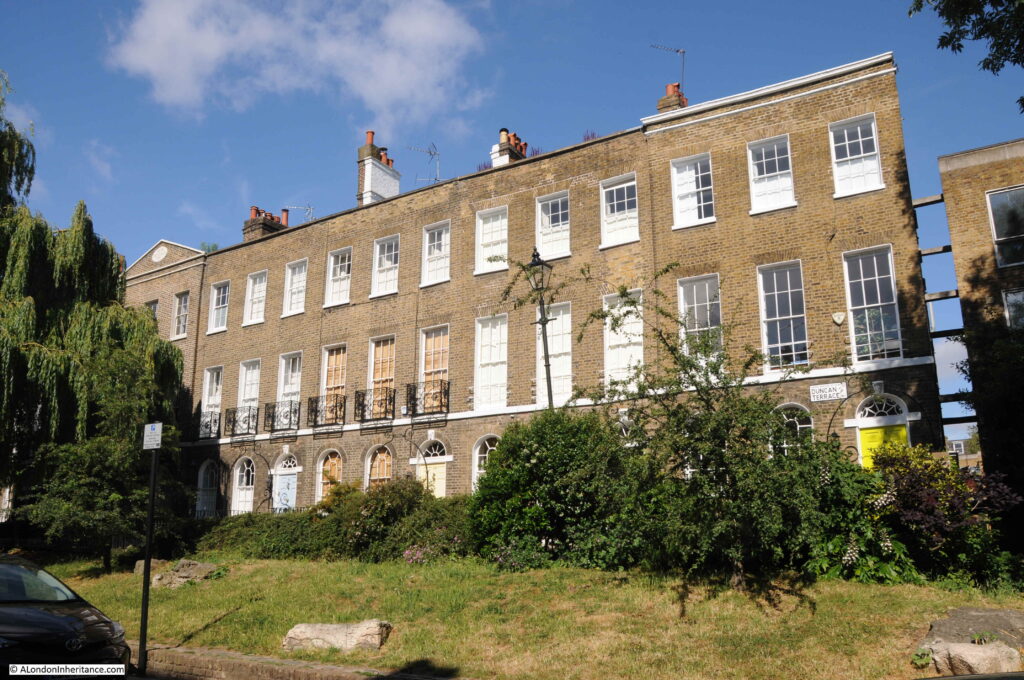 Looking north along the original route of the New River: 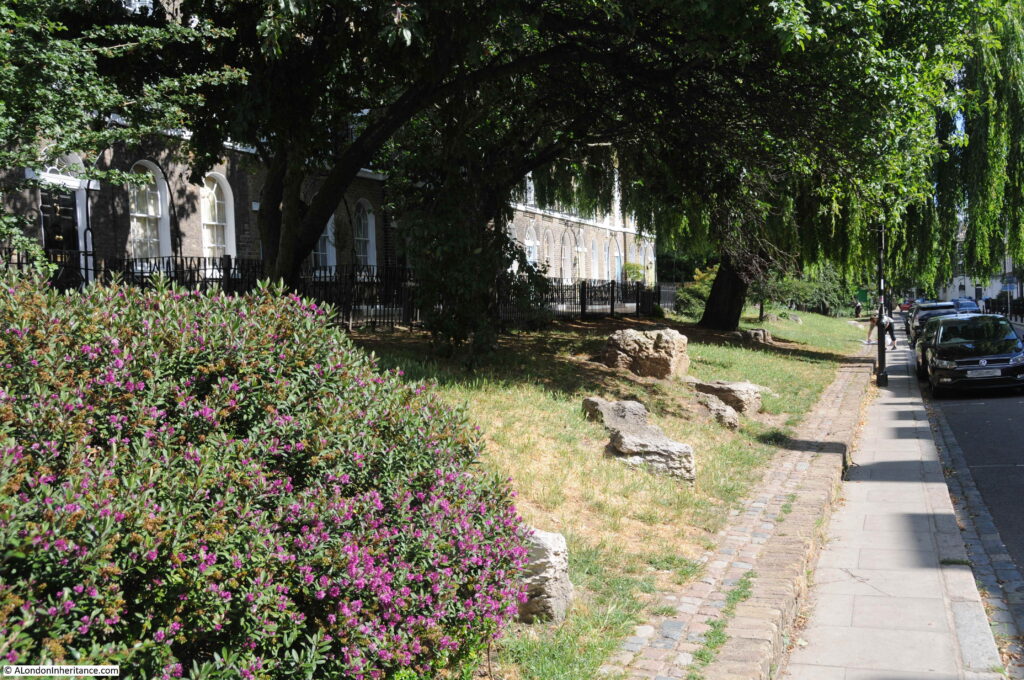 The view to the south showing how the terrace was built at a raised level to the river: 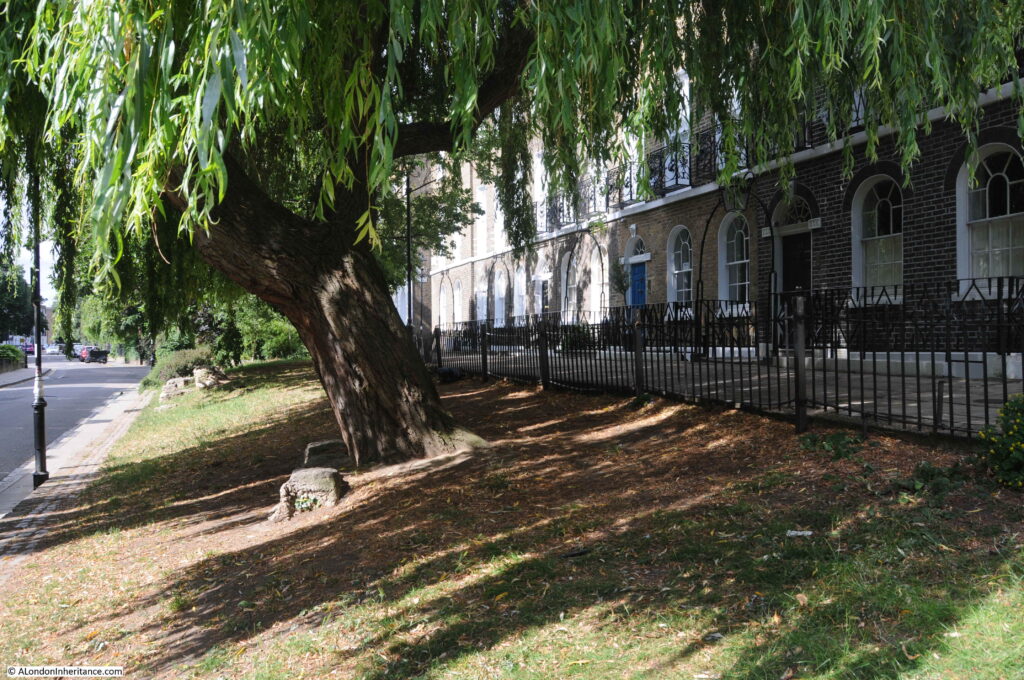 As the terrace could not face directly onto the New River, a raised pavement was built in front of the terrace, and this remains today to give access to the front doors of each house: 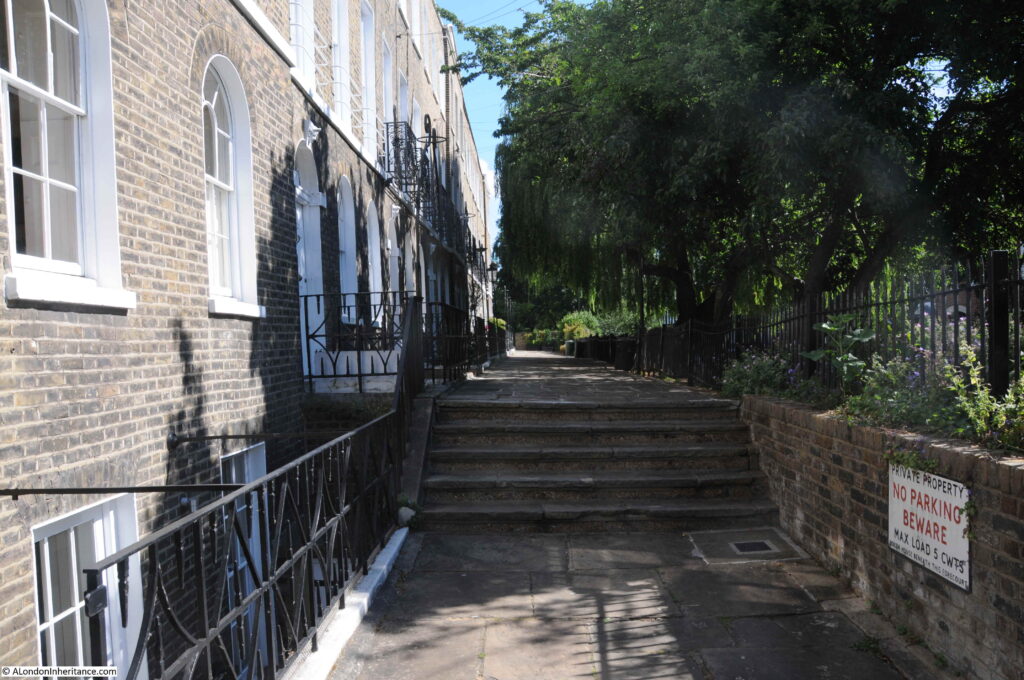 In 1793, Taylor continued the southern extension of the terrace and built what are now numbers 46 to 49 Duncan Terrace on the opposite side of the junction with Charlton Crescent. This area was originally known as Clay Pit Field as it had been occupied by clay pits, extracting clay for the manufacture of bricks, but as the clay was exhausted, the land was more valuable as a site for houses.

This southern terrace followed a similar design to the northern New Terrace with a raised pavement between the houses and the New River: 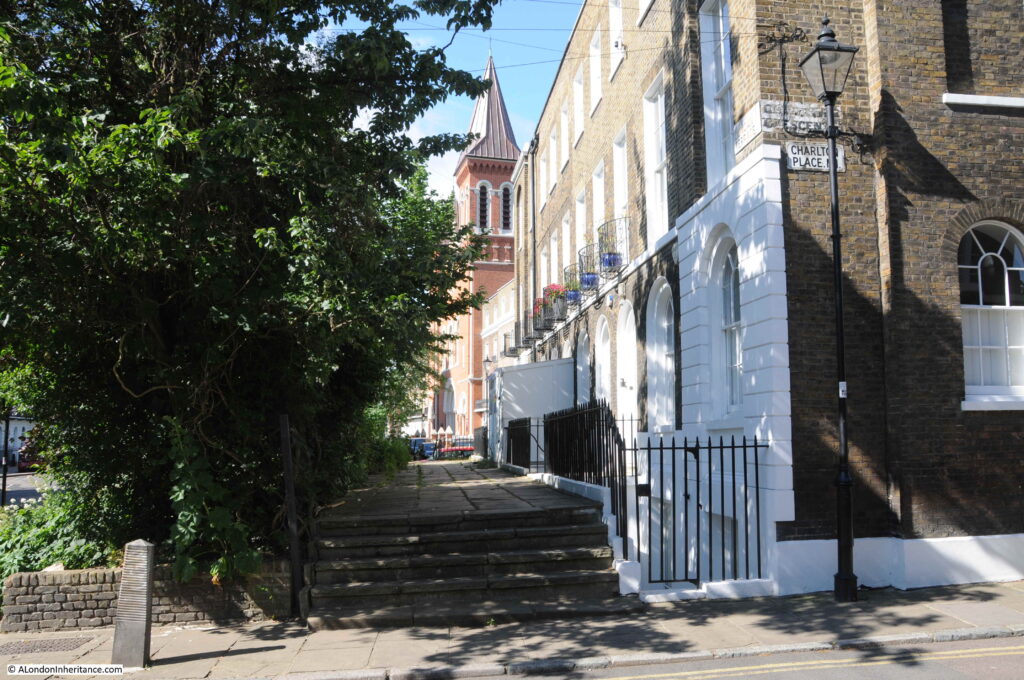 Further south along Duncan Terrace is the rather magnificent church of St John the Evangelist, built as a result of the Catholic Emancipation Act of 1829 which released Catholics from the restrictions that had been imposed on them since the Reformation. 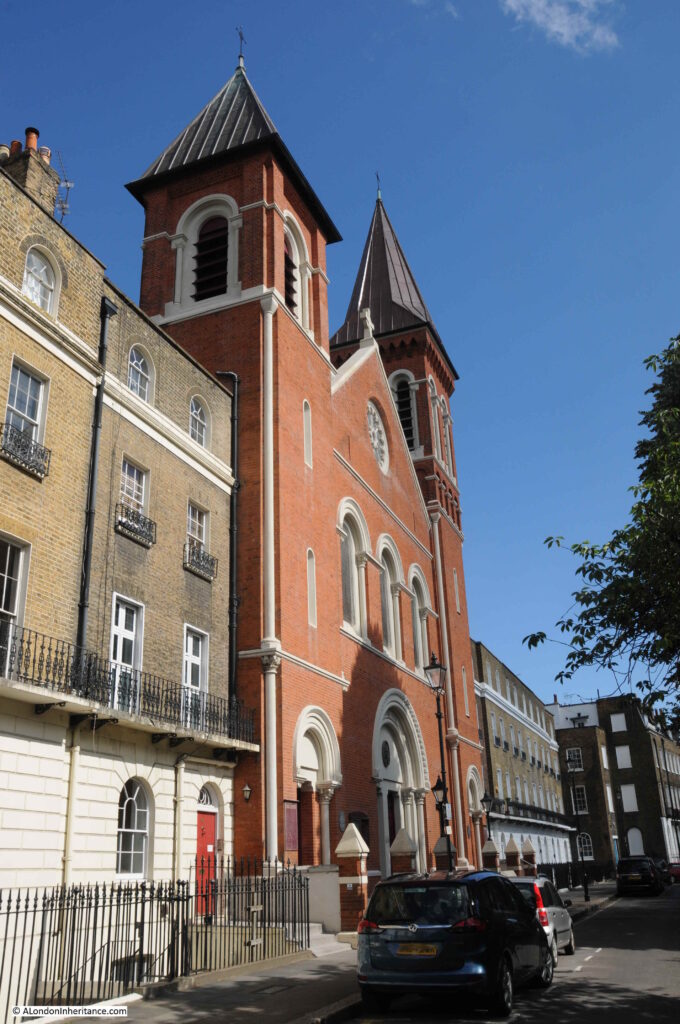 The land was purchased for the church in 1839, and the design completed by the Catholic architect Joseph John Scoles. It took a number of decades for the church to be completed with work on the towers commencing in 1873.

The terraces either side of the church are today in lovely condition, but as with much of Islington this is a result of restoration work over the last few decades and the considerable increase in value of properties in the area.

In 1953, the route of the New River had not yet been landscaped, or turned into a park, as shown in the following photo from 1953, and there was a gap in the terrace where one of the houses had suffered bomb damage. 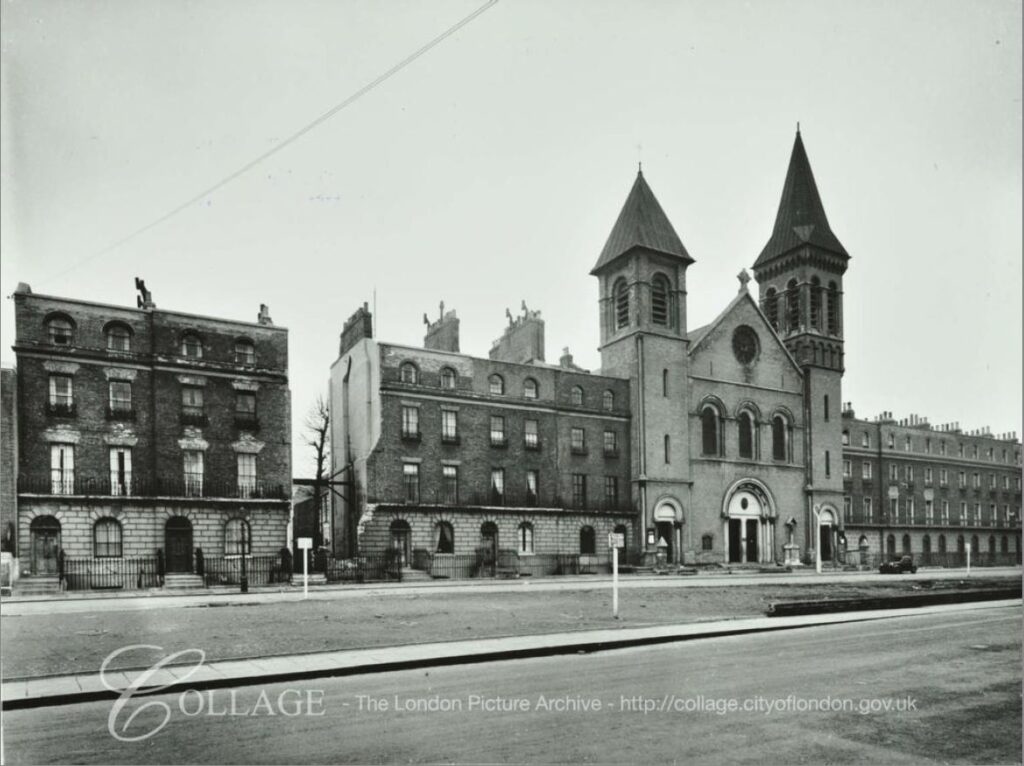 Crossing the route of the New River and into Colebrook Row and the street is lined with similar terraces: 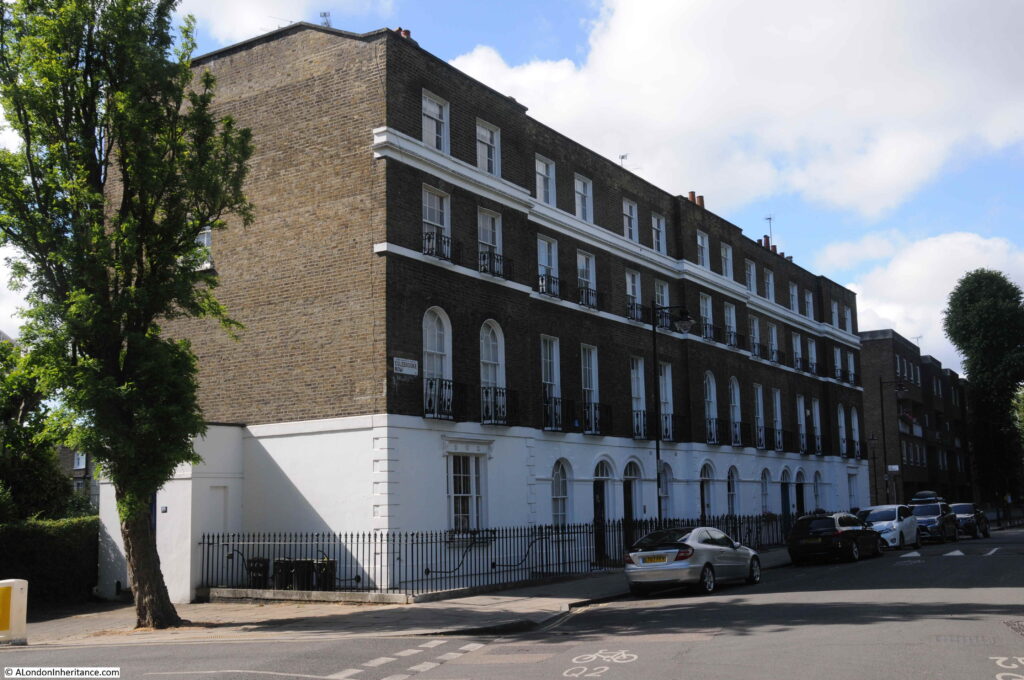 And this is where the Regents Canal enters the Islington Tunnel – this is the view looking along the canal on approach to the tunnel: 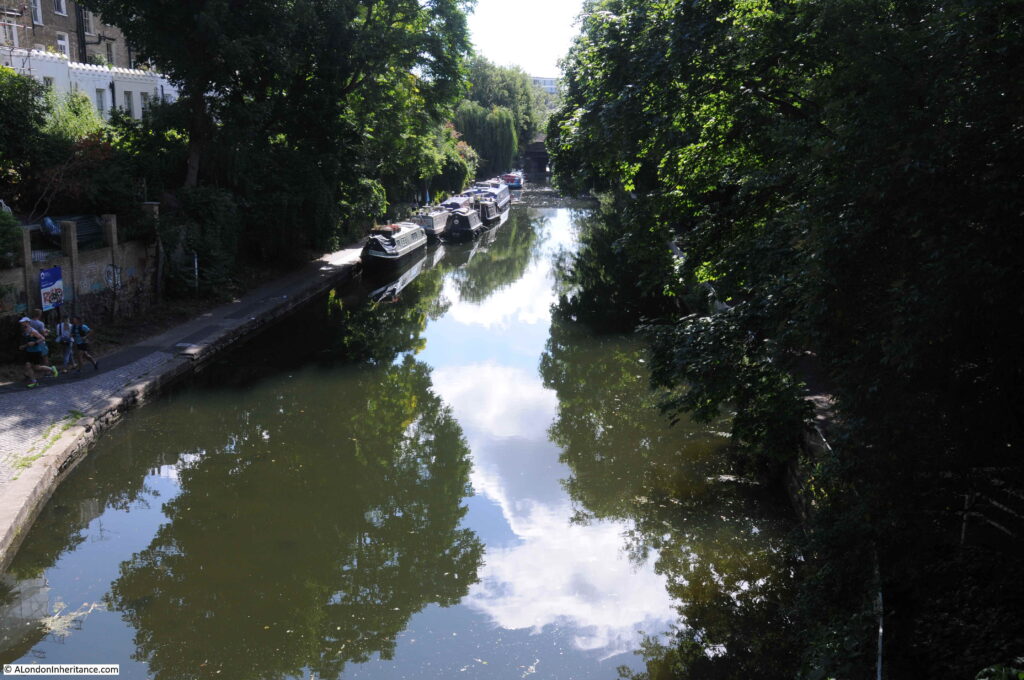 The entrance to the Islington Tunnel, under Colebrooke Row. The tunnel runs to Caledonian Road and is 878 meters long. 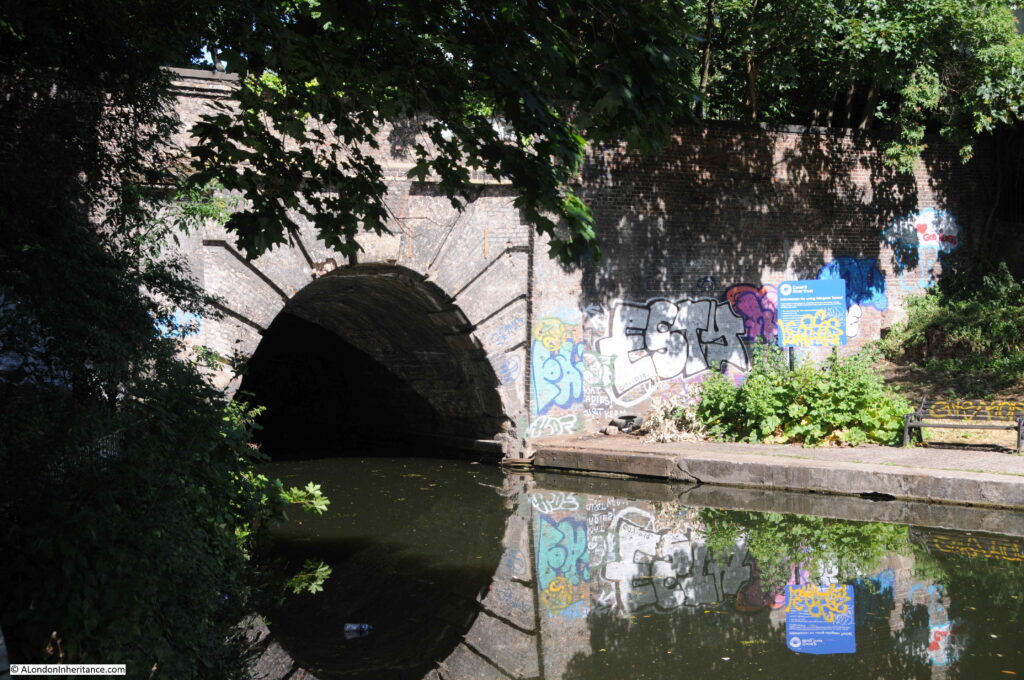 Walking back along Colebrooke Row, and the park follows the route of the New River and separates Colebrooke Row and Duncan Terrace. They are now landscaped, planted with trees, with a central path running the length of the park: 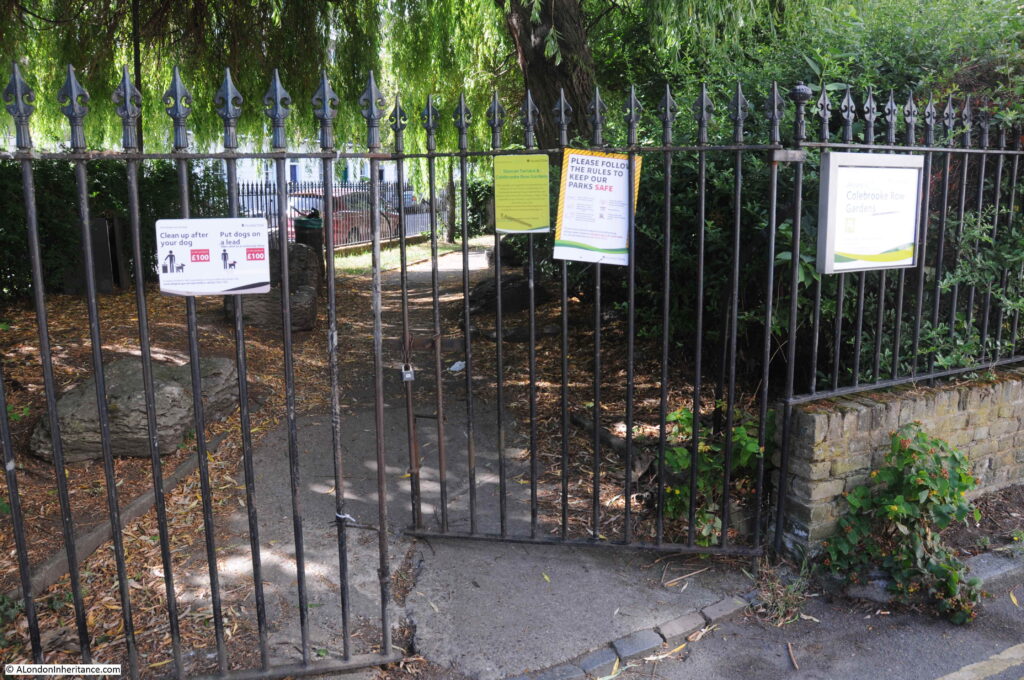 Although today there is a one way system running through the parks, with the appropriate warning signs about social distancing: 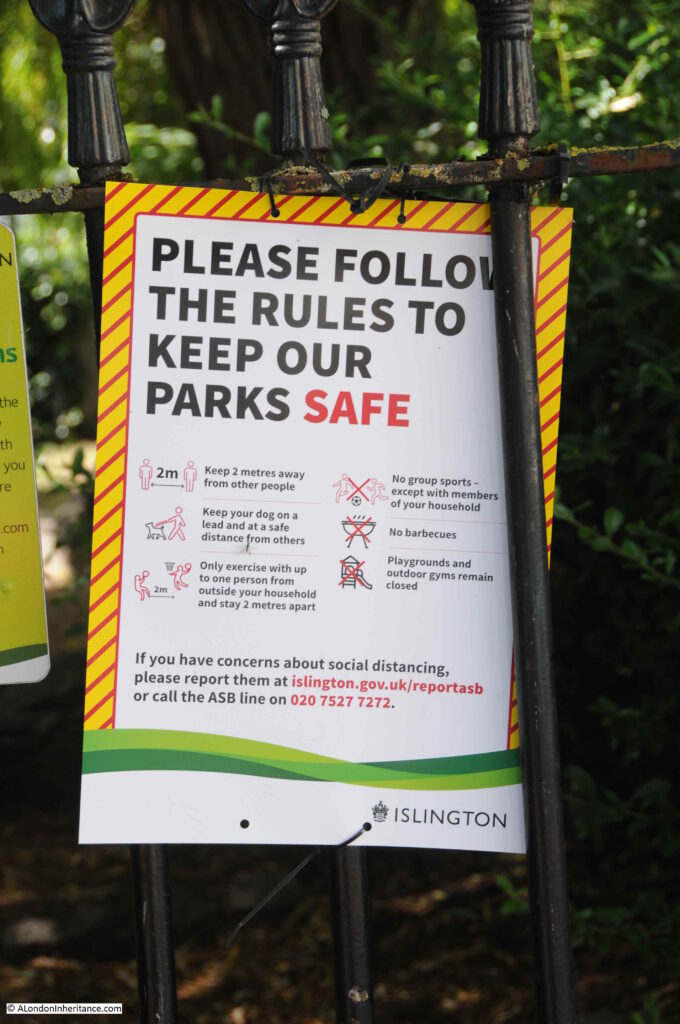 The following photo shows the eastern side of Colebrook Row, with the street, then the New River route on the left, then Duncan / New Terrace (on the left but not visible in the photo). As can be seen from the slight differences in architectural styles, the terrace has changed over time. as different builders added to, demolished parts of, and changed the style of the buildings. 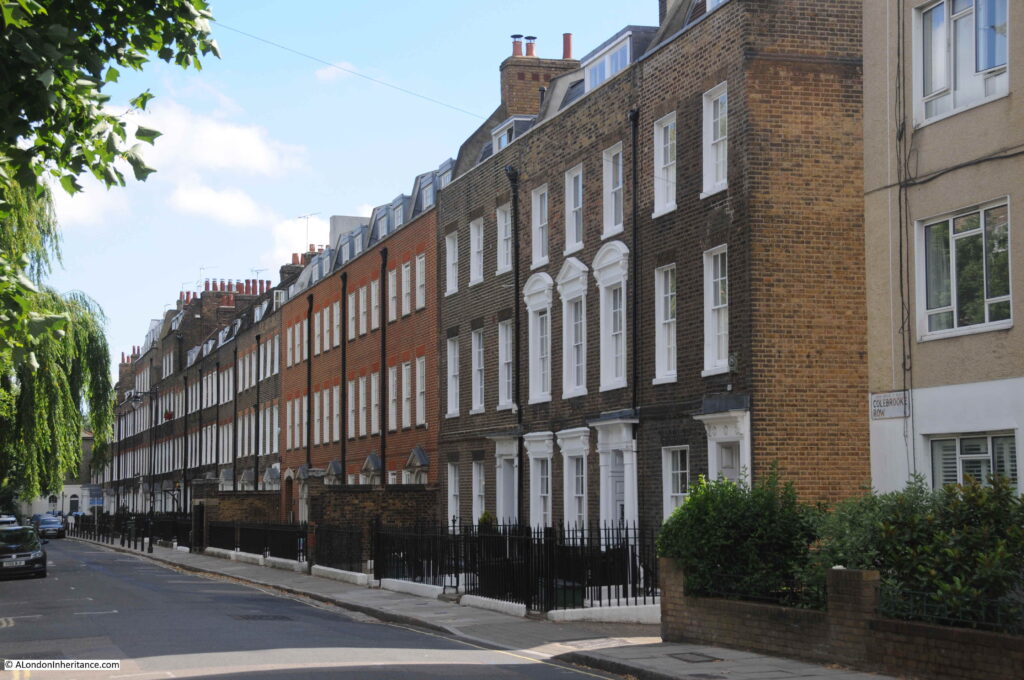 I have walked from New Terrace at the top of the oval in the map, to the Regents Canal at the lower end of the oval, and back again along Colebrooke Row, as there is one house to find that is earlier than all the other houses, and was once the home of a rather interesting character.

The white painted house at the end of the terrace in the following photograph is Colebrooke Cottage, number 64 Duncan Terrace, dating from around 1760. 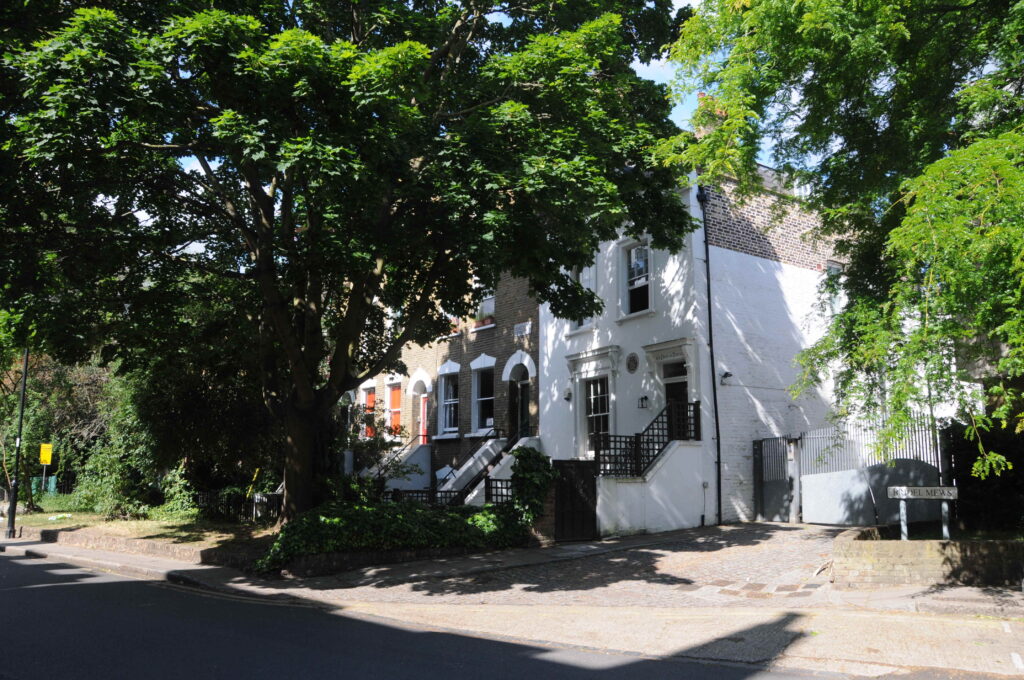 Colebrooke Cottage was originally a single house, standing alone in the fields that covered the area, and faced onto the New River. It remained a single house until the construction of New / Duncan Terrace on the left. The following photo shows Colebrooke Cottage, New / Duncan Terrace to the left and the route of the New River running between terrace and road. 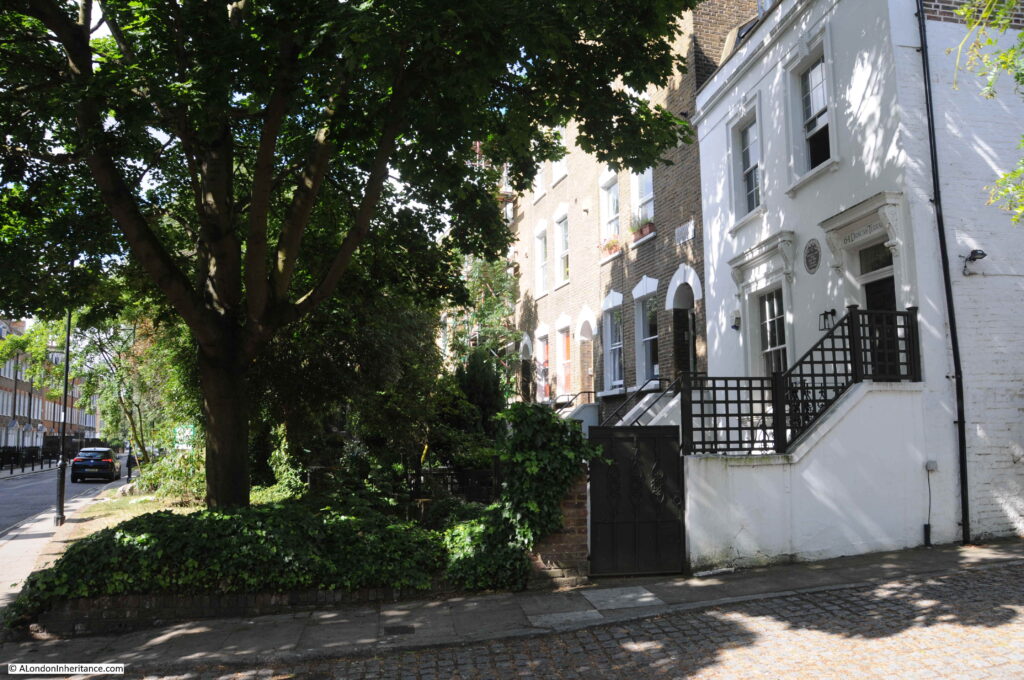 The following print shows Colebrooke Cottage as it was before the construction of New Terrace. It is rather idyllic view. The cottage is surrounded by trees, the New River runs along the front and a boy is fishing in the river  © The Trustees of the British Museum. 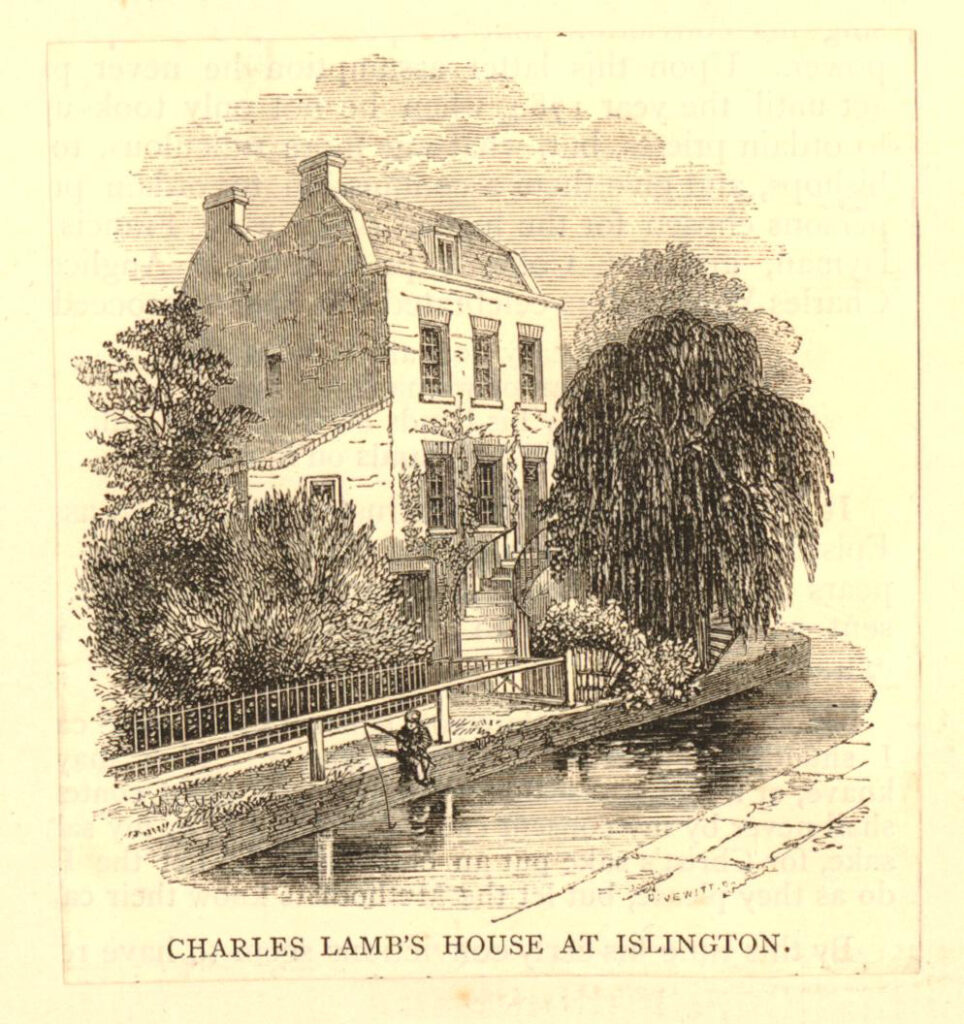 Comparing the two prints shows a number of differences mainly down to 19th century changes, including a reduction in the number of windows. Restoration work in the 1970s uncovered evidence of the side windows that would have had to have been bricked up when New Terrace was built.

The print is titled Charles Lamb’s House At Islington.

Charles Lamb was a poet and essayist. Born in Office Row in the Temple in 1775 where his father worked in the legal profession. On the death of his father’s employer, the family consisting of Charles, his sister Mary and their mother and father had to leave the house tied with his father’s job and move into cramped lodgings nearby.

After a short spell at the South Sea Company, he moved to the East India Company in 1792, where he would spend the rest of his working life. He was employed as a clerk, a job he did not enjoy.

His first published work was a small collection of sonnets that he provided for a book of poems published by Coleridge in 1796.

But it was not until the 1820s that he achieved a degree of fame when he published a series of essays in the London Magazine under the name of Elia (a name he adopted, allegedly the last name of an Italian man that had also worked at the South Sea Company)

However in many ways he had quite a tragic life which probably influenced his writing.

After the death of his father’s employer, the family were forced to move to cramped lodgings, and Charles and his sister Mary seem to have been responsible for supporting the family, and it was the resulting pressure which probably led to his sister Mary, in a fit of insanity to kill their mother and badly wound their father.

Charles took Mary to an asylum, and to avoid her imprisonment, he agreed to look after her at home, which he did for the rest of his life.

Mary did suffer mental health problems for the rest of her life, but she also published works with Charles, including a retelling of Shakespeare for children, a book which is still published today.

He did not marry. His first proposal of marriage to one Ann Simmons was rejected which led to a short period of what at the time was called insanity, probably what we would now call depression.

His second attempt at marriage, with a proposal to an actress Fanny Kelly was rejected, probably because she could not contemplate a life which involved looking after Mary.

He moved to Colebrooke Cottage in 1823 and stayed there for only 4 years, but it was here that he was the happiest he had ever been. He retired from work at the East India Company, and lived here with Mary, surrounded by books and the Islington countryside, and entertained literary friends. He described leaving his job as “33 years’ slavery…a freed man, with £441 a year for the remainder of my life”.

He described the house as a cottage, “for it is detached, with six good rooms. The New River runs close to the foot of the house and a spacious garden is behind. I feel like a great lord, never having had a house before”.

However the writer Thomas Hood called it a “cottage of ungentility for it had neither double coach house nor wings, and like its tenant, it stood alone”. Some author snobbery or competition perhaps.

The New River caused occasional problems for his guests as the myopic writer George Dyer fell into the river after leaving the house.

In 1827 he left Islington and moved to Enfield, followed by a move to Edmonton in 1833, where he died the following year after a fall.

A print of Charles Lamb dating from 1828  © The Trustees of the British Museum: 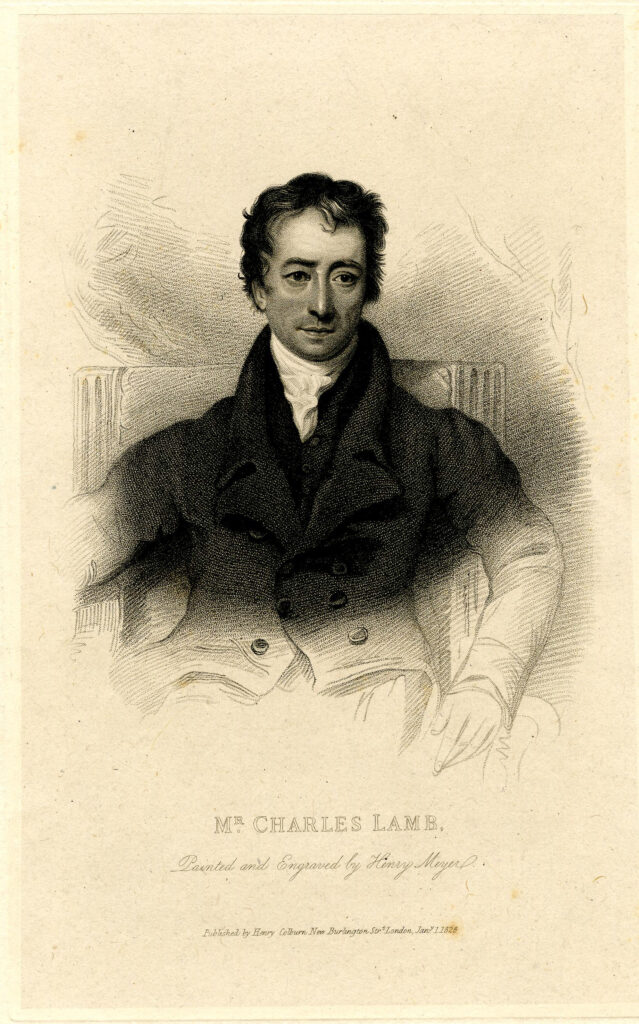 A London County Council plaque is on the front of Colebrooke Cottage to commemorate Charles Lamb’s time on Colebrooke Row, Islington. 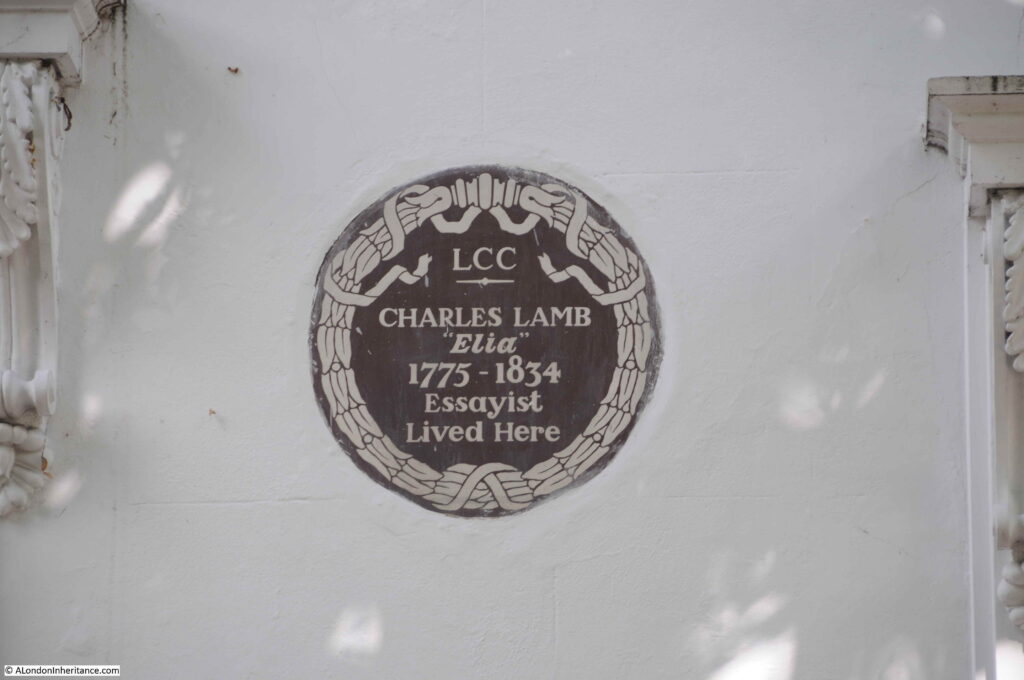 Walking along Colebrooke Row, there is not really anything that would stand out – it’s a street of rather nice late 18th / early 19th century terrace houses as can be found across much of Islington. I went there to find the location of one of our 1980s photos. However, what makes this street so special is a single house that remains from the time when this was all agricultural land and clay pits. Finding one of the few places where the route of the New River can still be clearly seen, and how houses were built to face on to the New River.

And finding a literary character who was in the shadows of the major literary characters of the time, who should have had a happier life, but who seems to have enjoyed a few years surrounded by the Islington countryside.