The problem I find with this blog is that there is so much to discover and learn, each post really needs much more investigation than I currently have the time to do. This week’s post is an example. 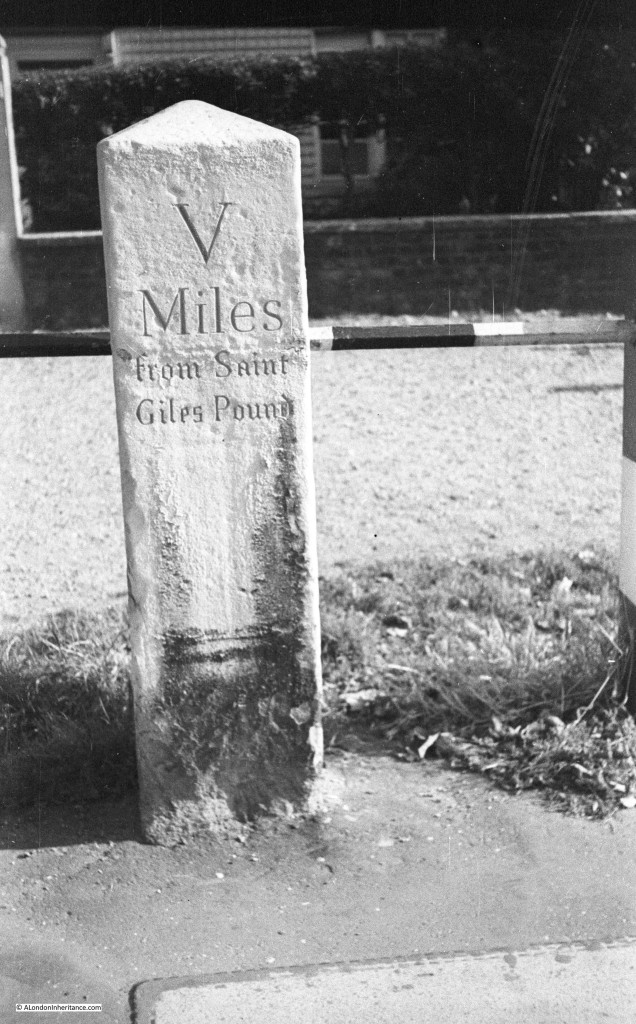 The milestone is still there. See my following photo of the milestone today. Nothing special you might think, but compare the mileage, five in 1948 and four today and the destination is a location that does not now exist in London, Saint Giles Pound. 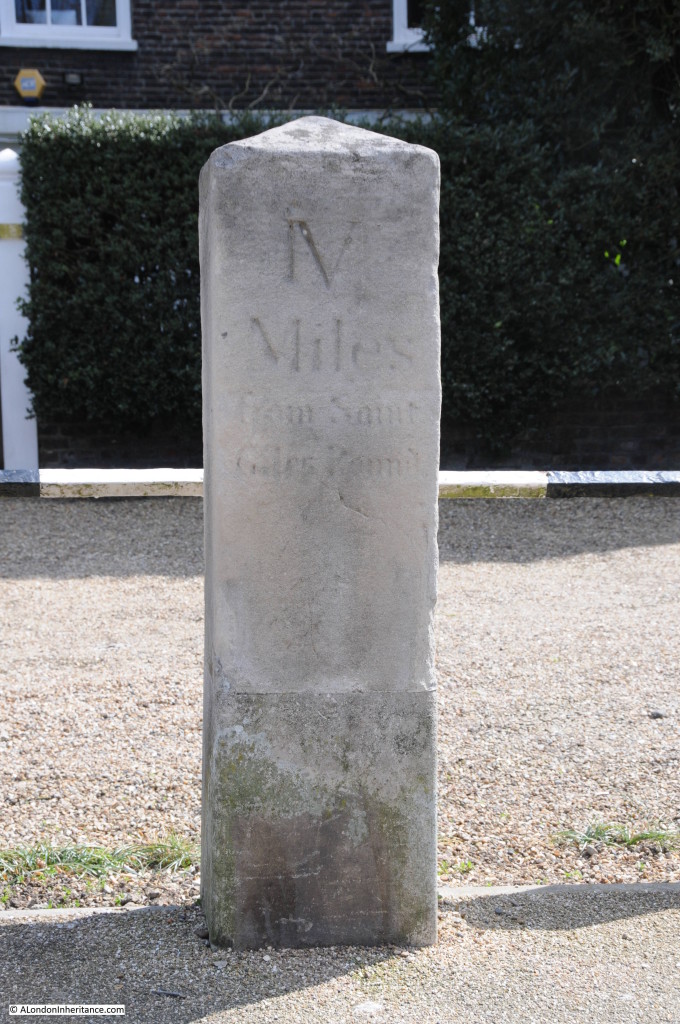 So where and what was Saint Giles Pound?

Saint Giles refers to the parish of St. Giles in the Fields, the parish that took in the area around the church of the same name, just a short distance south-east from the junction of Tottenham Court Road, Oxford Street and Charing Cross Road.

In my usual London reference books I have found a number of references to the Saint Giles Pound which was a fenced area to hold sheep and cattle etc.

From “The History of the United Parishes of St. Giles in the Fields” by Rowland Dobie, published in 1829:

“The Pound and Cage originally adjoined each other, and stood in the middle of the High Street, from whence Parton informs us it was removed in 1656, to make way for the almshouses which were afterwards built there.

‘The Pound’ he adds, probably existed from a very early period, as a necessary appendage to the parish while a village, and abounding in pasture lands, though it is unnoticed in the books of the parish, till Lord Southampton’s grant of the ground on which it stood for the almshouses, where it is described as occupying a space of 30-feet, which was to the dimensions of the new Pound, therein directed to be removed to the end of Tottenham Court Road. The exact site of the Pound was the broad space where St. Giles High Street, Tottenham Court Road, and Oxford Street meet, where it stood till within memory. Noticed for the profligacy of its inhabitants, the vicinity of this spot became proverbial: witness the couplet of an old song.

And bred up near St. Giles Pound’

it was finally removed about the year 1765, since when the neighbourhood has experienced many improvements, particularly by the erection of the great Brewery of Messrs. Meux and Co.

The Cage appears to have been used as a prison, not merely of a temporary kind, but judging from the parish records, with little lenity.”

Charles Knight in the Milestones section of his book, London, published in 1841 states:

“Again, St. Giles Pound, a real pound for cattle, which is marked upon the old plans, was a prominent object, standing in the village of St. Giles at the intersection of the roads from Hampstead and from Oxford. This also was something like the beginning of London: but Hicks’s Hall and St. Giles Pound have long since vanished; and the milestones which record their glory ought also to be swept away.”

The milestone therefore is alongside one of the old routes that was used to bring animals in from the north, through Highgate and down into London, and thankfully it has not been “swept away”.

The two photos of the milestones also have different distances, five in 1948 and four in 2016. The only reference I can find to this change is that it was made by a local resident of Highgate who was frustrated with the error. So is four miles correct? Although I have walked the route, I have not measured, so a quick check on Google maps, from Highgate West Hill at roughly the position of the milestone, to a point on New Oxford Street a very short distance past the end of Tottenham Court Road to allow for the possible siting of the Pound more towards St. Giles High Street. The following map confirms the distance as being exactly four miles (the blue dots). Even with some longer alternative routes, the distance does not reach five miles. 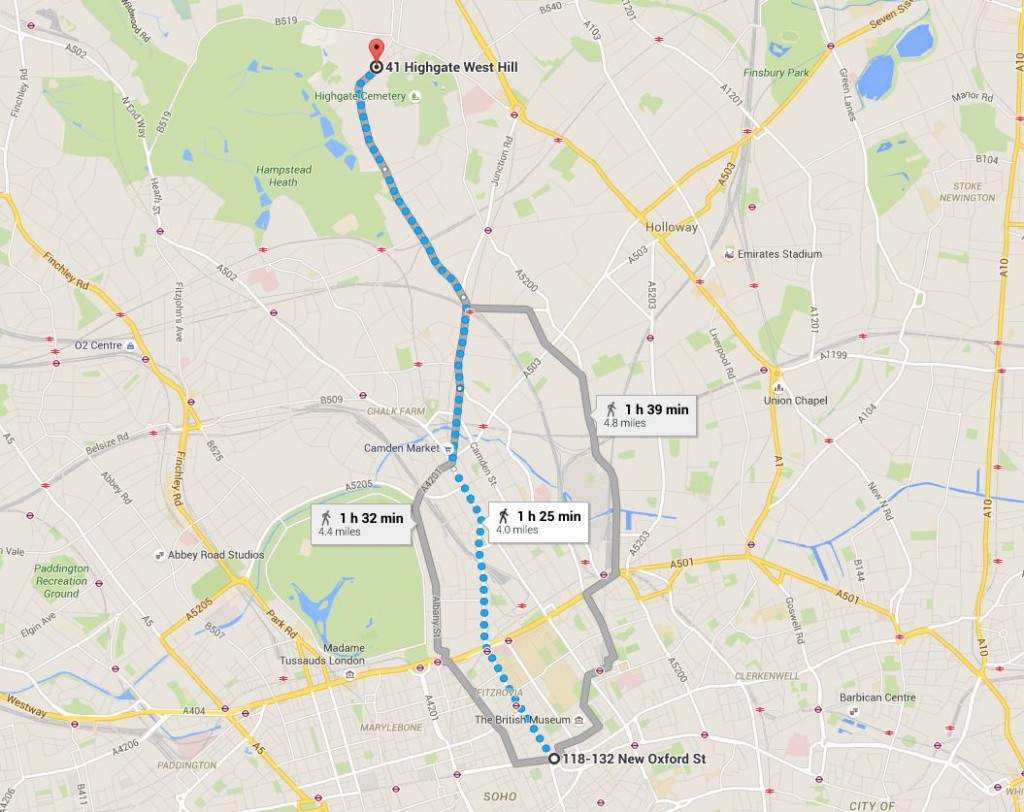 It would be interesting to know if the error in distance was from when the milestone was originally installed, or perhaps when the figures may have been re-cut as they do look very sharp in the 1948 photo with very little deterioration to the edge of the lettering. The key point is that today, the distance is correct.

A wider view of the milestone alongside Highgate West Hill. 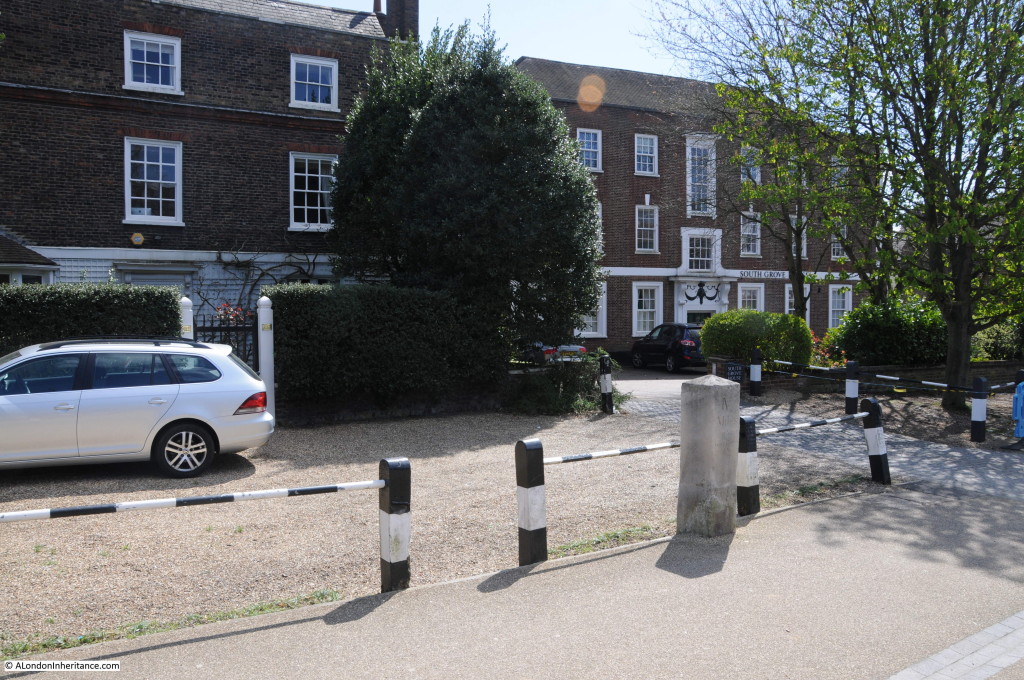 Intriguingly, the Pound may be marked on a map. The following is an extract from John Rocque’s map of London from 1746. This is 19 years before the Pound was removed. Look in the lower right of the map, at the junction of Tottenham Court Road, Oxford Street and the High Street of St. Giles. There is a rectangular feature in the open area of the junction – could this be the Pound? The location fits perfectly the description given by Rowland Dobie in his book, quoted earlier. 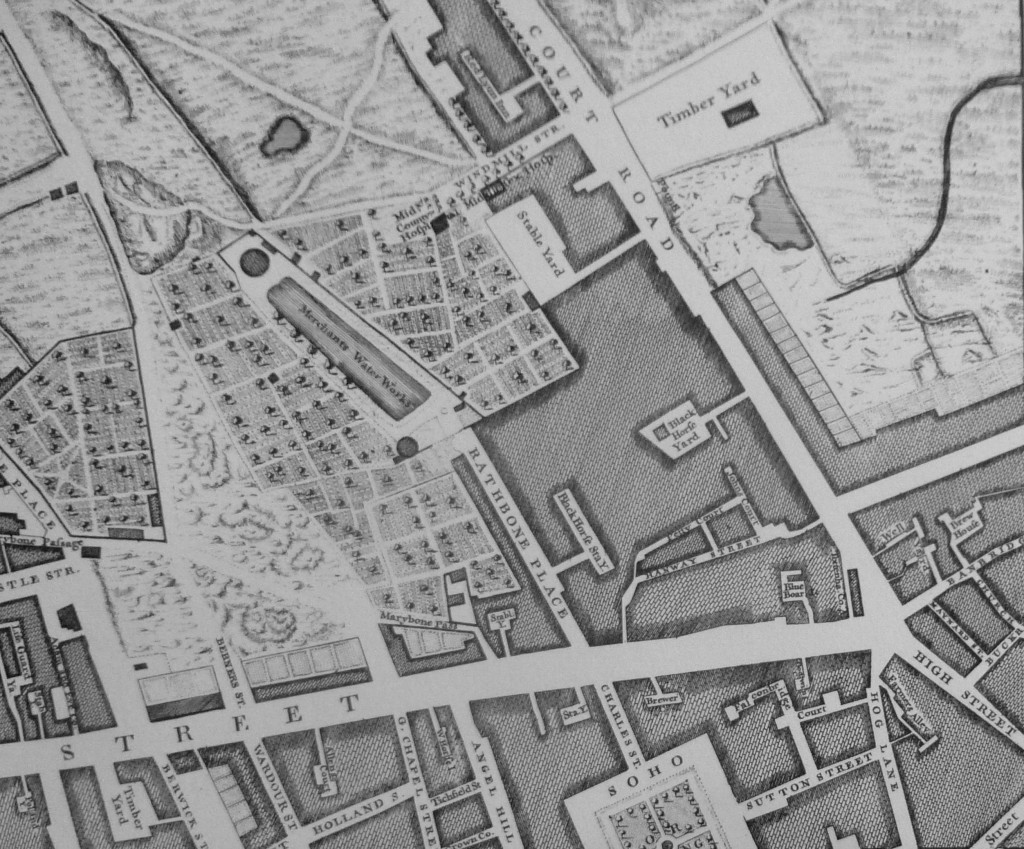 Strange to think that this very busy junction, with the new Crossrail station being built, was once the location of a Pound, holding animals being brought down from the north.

The map extract is from the very lower right hand corner of the page. At the very bottom right corner is a street with only the word “Street” showing. This is Denmark Street featured in my post of a couple of weeks ago.

The map has some other references that point to the original use of this area. In the above map, the road running south from the junction is Hog Lane. The alley leading off from the top right of Hog Lane is Farmers Alley.

“In Hogarth’s time this portion of the street was known as Hog Lane, later Crown Street, under which name it was widened and made part of Charing Cross Road.”

So after the Pound had disappeared, there was no longer an association with animals so the name changed, with finally as so often happens in London, the street being integrated in the lengthening and widening of a main street.

Returning to my opening comment at the start of today’s post, just finding this single milestone opens up so many questions.

Is there more information on the Pound, and is the original location marked on any maps? (the Rocque map shows the location after the move from St. Giles High Street). Are there any more of the milestones? I have not found any, however Knight’s book refers to another milestone in Camden at the two-mile point. What was the purpose of the Pound? Was it used as a stopping off point before heading into the City or did it serve the local area?

More questions for my ever-growing list of things to learn about London.