For last week’s post I was looking at the building that was once the pub Jack Straw’s Castle. This week, I have walked from Jack Straw’s Castle, along North End Way towards Golders Green to find another famous Hampstead pub. This is the Old Bull and Bush as photographed by my father in 1949: 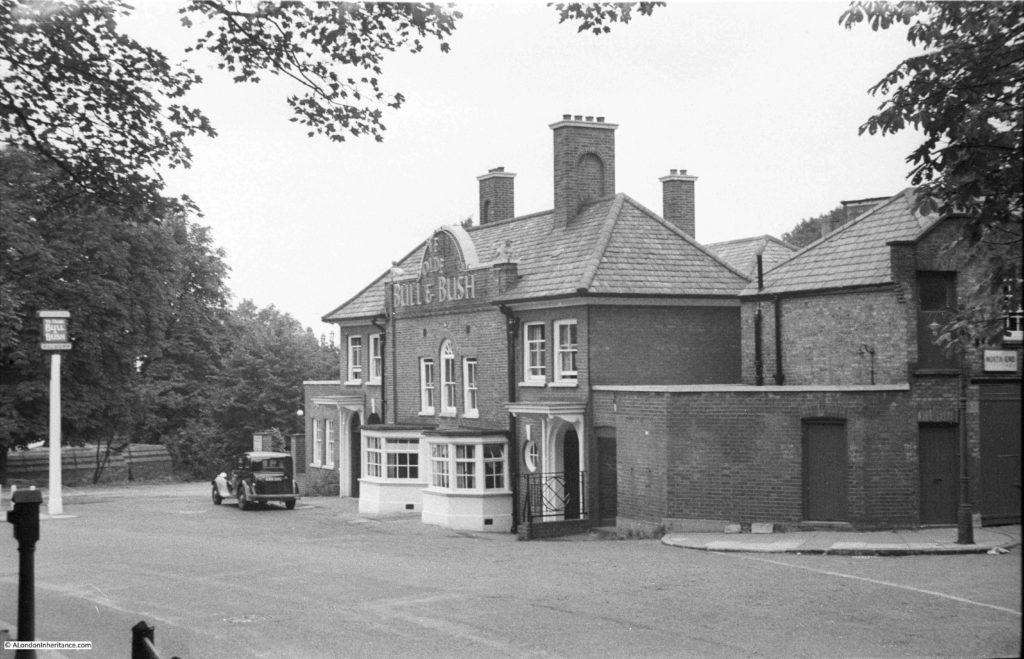 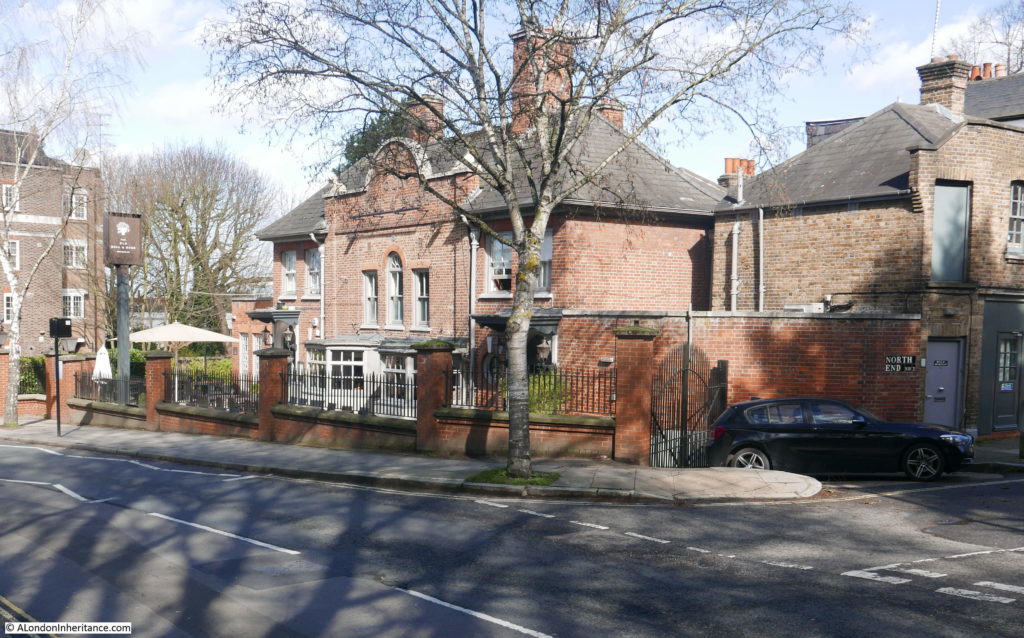 If you have not been to the Old Bull and Bush, you probably recognise the name from the music hall song “Down at the Old Bull and Bush” made famous by Florrie Forde in the early years of the 20th century. The song has the following chorus (there are some minor variations, dependent on the source):

The song appears to date from 1903 / 1904. There is a recording apparently dated from 1903 by a Miss Edith Manley. The song may also been a re-work of a song with much the same words titled “Down at the Anheuser Bush” – a song commissioned by the Anheuser-Busch brewing company which also seems to have appeared in 1904.

The Anheuser Bush origin my be correct as the Old Bull and Bush version has a German band reference and the Anheuser Busch company grew out of the 1860 take over of the Bavarian Brewery in St. Louis by Eberhard Anheuser.

The song appeared in a number of pantomimes at Christmas 1904, but it was Florrie Forde’s recording of the song and live performances that appear to have given the song popular appeal at the time, and the longevity needed to keep the song in the cultural background 115 years later.

The song may well also be the reason why the Old Bull and Bush did not go the same way as Jack Straw’s Castle.

Florrie Forde  was born on the 16th of August 1875 in Melbourne, Australia, She was the sixth of eight children of Lott Flannagan, an Irish-born stonemason and Phoebe Simmons. Although her last name was Flannagan, she adopted the surname of a later step father to become Florrie Forde.

She had success in Australia, but moved to England in 1897 where she started to appear in London music halls. This was the start of a very successful career which would last until her death in 1940. 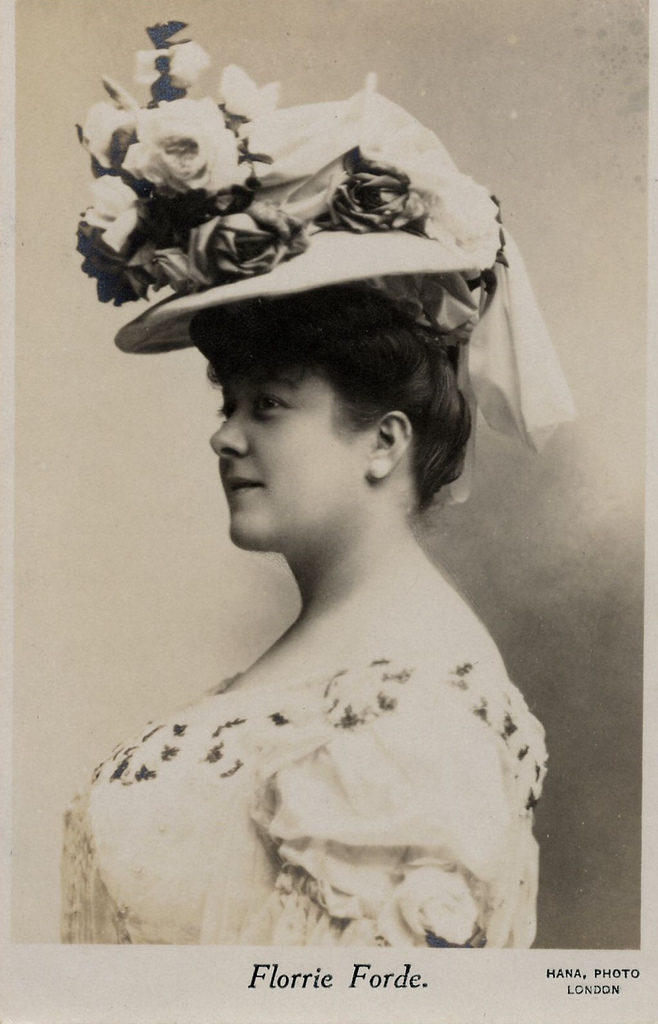 The Old Bull and Bush at it appeared in the first decade of the 20th century: 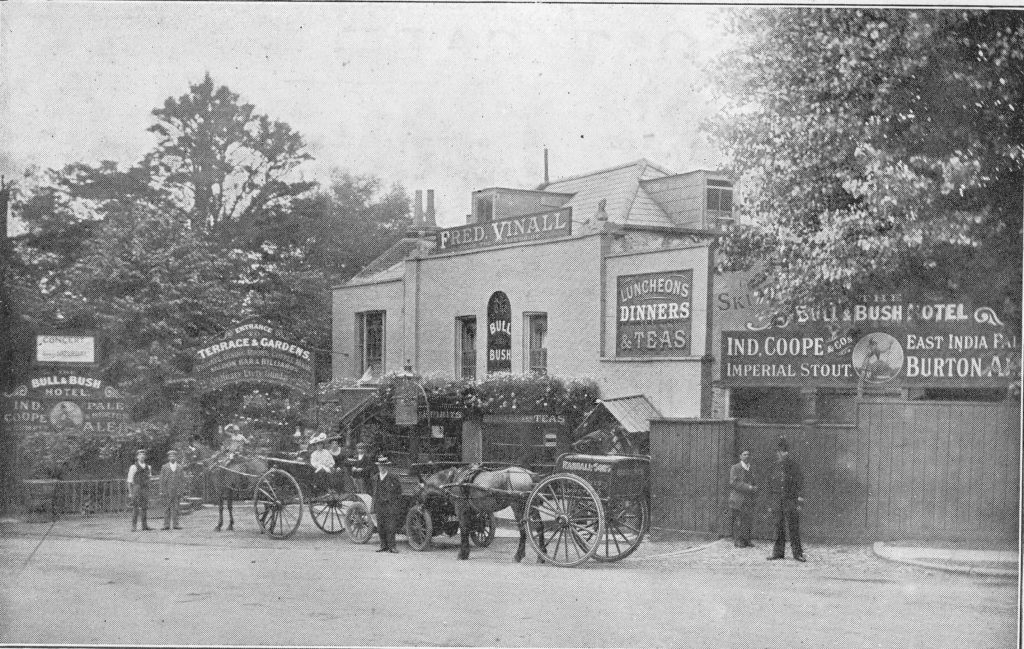 The style of the building is much the same as my father’s photo and the pub you will see today, however it has also clearly had some major redevelopment.

Hampstead pubs were major attractions during summer weekends and public holidays, when Londoners would have a rare opportunity to stop work and head to the open space and clean air of the heath. As well as the open space, fun fairs could be found on the heath as well as the Vale of Health and the pubs would always be a popular destination as shown in the following photo where crowds are heading into the Terrace and Gardens which could be found at the rear of the pub. 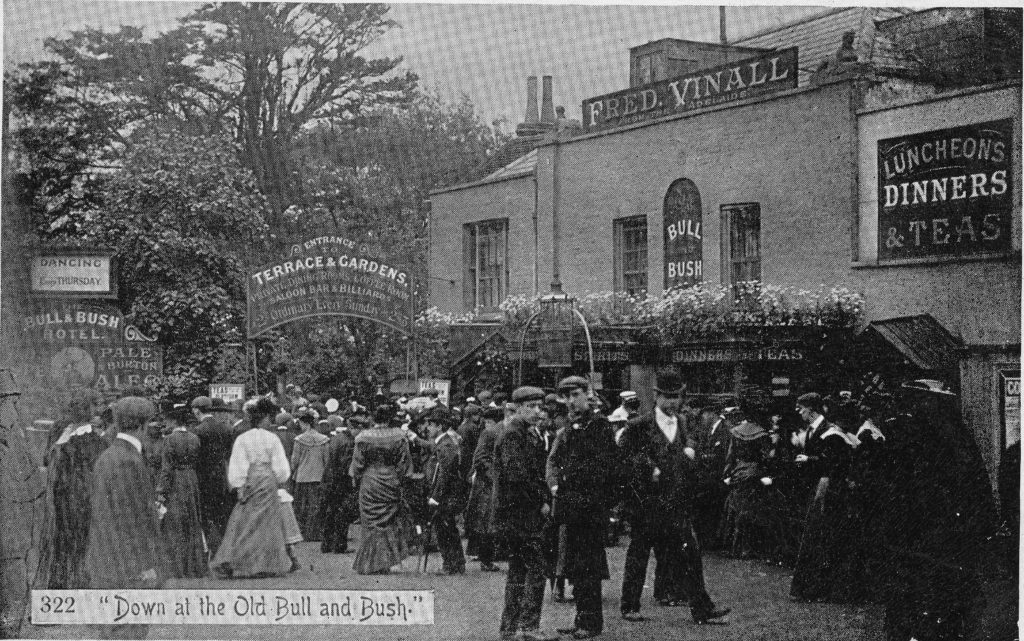 An example of the impact that the bank holiday trade could have for the country, and the pubs of Hampstead can be found in the following newspaper report from The Standard on Tuesday 17th April 1906 reporting on the previous day’s Bank Holiday:

“A RECORD BANK HOLIDAY – CROWDS EVERYWHERE – DAY OF SUNSHINE – SIGNS OF PROSPERITY. Absolutely empty was the Londoner’s verdict about London yesterday, as he strolled about the sunny streets of the metropolis. The fact remains that it was a wonderful Easter Monday, and that many holiday records were broken. The weather had a good deal to do with it. It was bright enough for June, and nearly warm enough for July. But the weather was not all. This is a time of good trade, and everybody is doing reasonably well. They are in the mood to enjoy a holiday, and they can afford to do it in ease and comfort.

The railway companies are unanimous in paying tribute to our satisfactory prosperity, as shown by the money we spend on pleasure. The passenger traffic on the Great Western was the highest ever recorded for Easter. Forty-four excursion trains left Paddington during the holidays. Liverpool Street station was a scene of unprecedented activity for the time of year, and 100,000 passengers left it during the week. More people went to Germany by way of the Hook of Holland, than ever before.

Coming to smaller matters, the landlords of The Spaniards, Jack Straw’s Castle, and the Bull and Bush at Hampstead Heath, say it was the best Easter Monday they have known for years; and the refreshment and amusement caterers of Epping Forest admit that they have done better than ever before. At a rough estimate, some quarter of a million excursionists have thronged the glades of the forests during the four days of the holiday.”

I am always struck when reading these old newspapers, that whilst some things have changed, so much remains the same. This coming Easter weekend, crowds will not be taking excursion trains, indeed long public holidays are often when stations close for engineering work as Euston is during the coming Easter weekend. However if the weather is good, it is almost guaranteed that TV reporters will be at one of the seaside resorts with scenes of crowded beaches and interviews with ice cream sellers praising the increase in business.  Hampstead Heath will also be busy, as will the Old Bull and Bush and The Spaniards.

To the side of the Old Bull and Bush was the entrance to the Terrace and Gardens as shown in a postcard dated 1906: 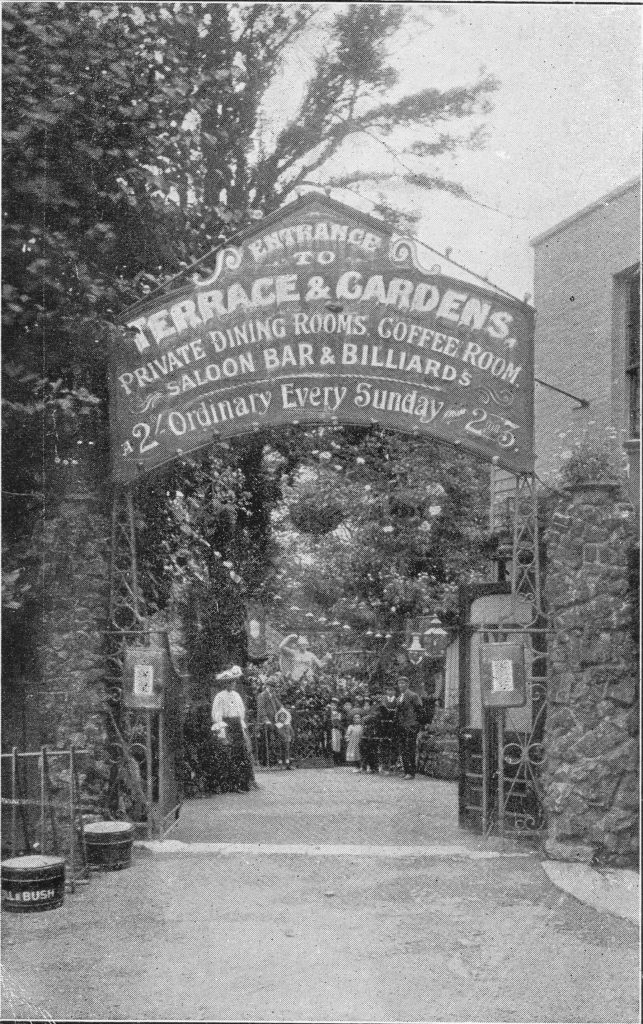 The Terrace and Gardens appear to have been a key part of the success of the Old Bull and Bush. The following view shows part of the gardens. Change the clothing of those sitting at the tables and this could be a pub garden today. 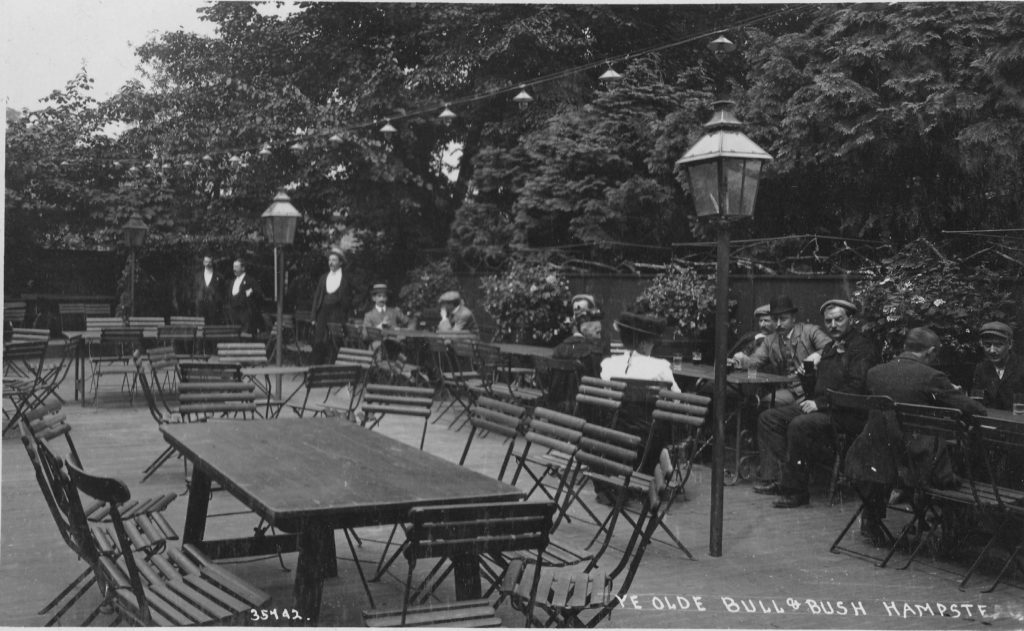 The above two photos shows lights strung along the gardens. This must have been a popular destination for a summer evening’s drink. 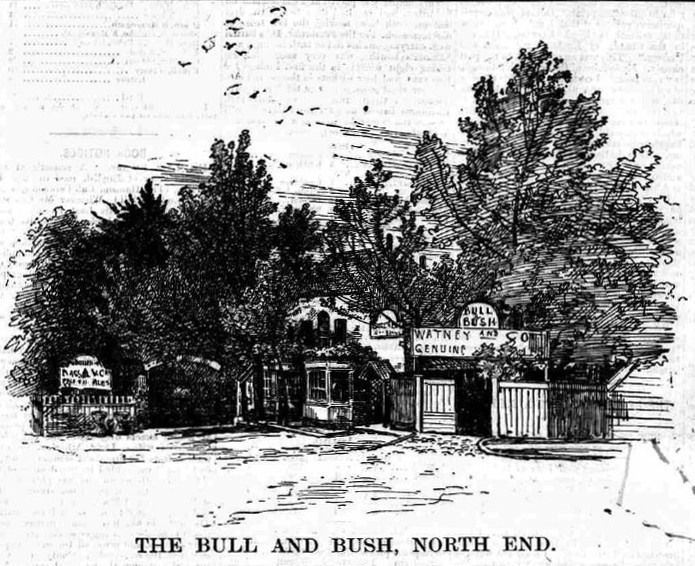 Some history of the Old Bull and Bush can be found in the Hampstead and Highgate Express dated the 15th September 1888. Note that in the following article the pub is called the “Bull and Bush” so the Old was added at some point between 1888 and the end of the century – an early attempt at marketing the history of the pub to visitors to the heath.

“No tavern situated in the suburbs of London is better known than the Bull and Bush. Contiguous to some of the loveliest bits of Hampstead scenery, and possessing pleasant garden grounds, the Bull and Bush is all that can be desired of an old fashioned, comfortable, roadside hostelry. These characteristics, added to the attractions of its rural surroundings, have made the Bull and Bush a favourite resort for Londoners.

The Bull and Bush was originally a farm house and the country seat of Hogarth (by whom the yew bower in the garden was planted); and which, after its transformation into a roadside place of refreshment, attained some reputation as a resort of the London wits and quality. Tradition informs us that the place was visited by Addison and several of his friends. North-end must have charmed them by the picturesque beauty of its situation.

This feature of the spot still retains, notwithstanding the innovations of brick and mortar, and the construction of roads through regions once sacred to grass and wild flowers. The approach to the Bull and Bush from the town of Hampstead, with its glimpses of gorse and brushwood near Heathbrow, and the foliage in the gardens of Wildwood, remains one of the most beautiful places in suburban London.

The Bull and Bush, like other old Hampstead taverns, has many interesting bits of gossip connected with its history.

‘What a delightful little snuggery is this said Bull and Bush!’ So Gainsborough the painter is reported to have said on one occasion, while surrounded by a party of friends, who, like himself, were enjoying good cheer at the tavern.”

The peak in popularity of the Old Bull and Bush appears to have been around the time that Fred Vinall was licensee as the majority of photos of the pub have Fred’s name in large letters along the top of the building. 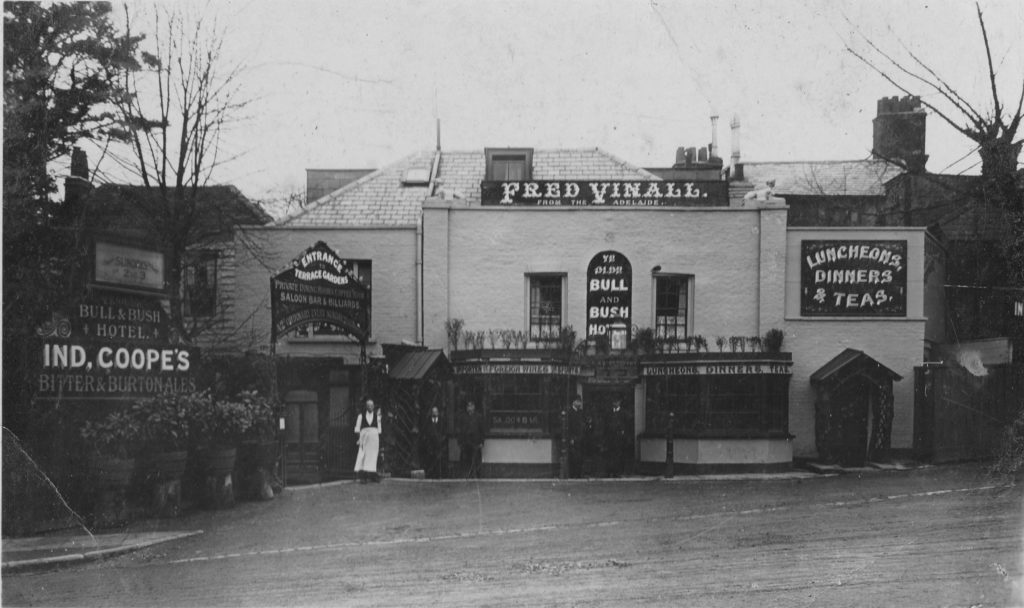 I wonder if that is Fred, standing outside the pub in the white apron in the above photo? He took over the pub in 1905.

Comparing the photo above, with the 2019 photo below shows that while the style of the pub has remained the same, the building has undergone some significant redevelopment, including the separation of the pub from the road by the wall and pavement. 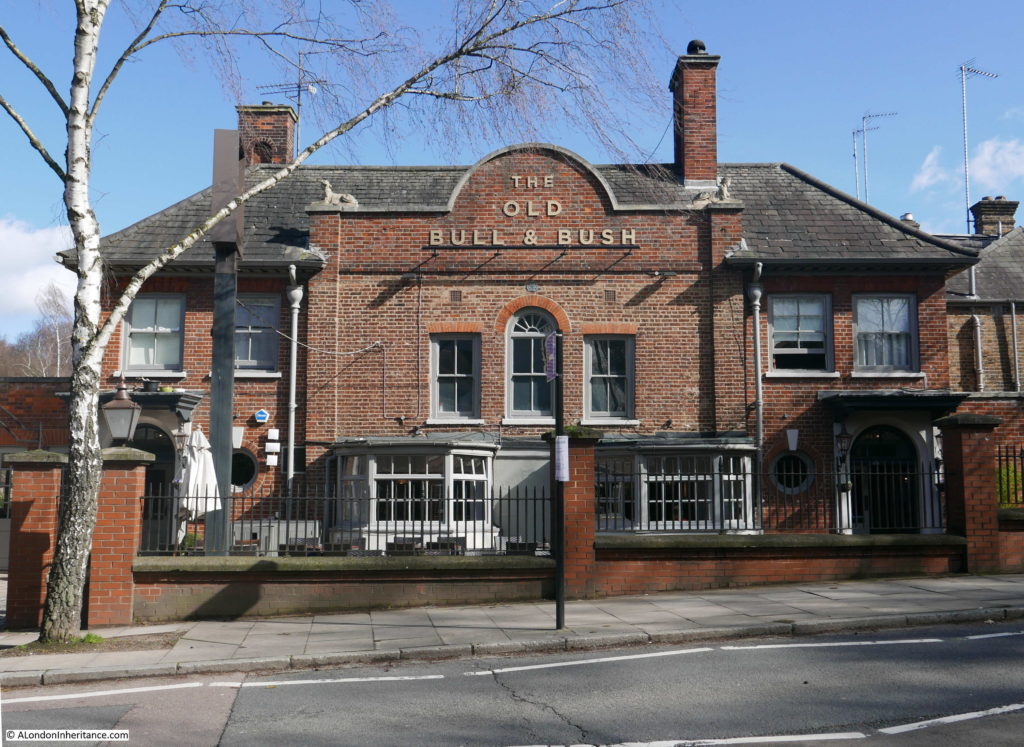 The road to the right of the pub has a lovely terrace of houses. I suspect the buildings on the left were originally stables. 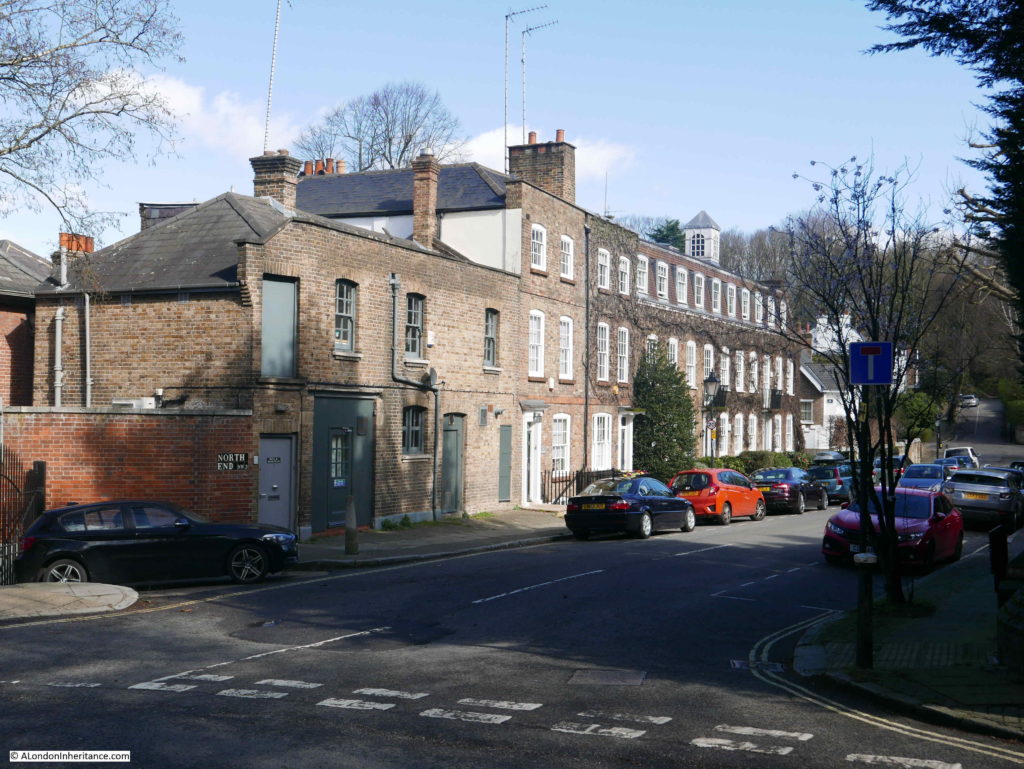 The attraction of the Old Bull and Bush has always been its location, and the 1888 newspaper article mentioned that the area “remains one of the most beautiful places in suburban London”. Whilst the road heading down into Golders Green is now surrounded by housing, the road continuing up towards Jack Straw’s Castle and then into Hampstead retains the appearance it must have had in the heyday of the Old Bull and Bush.

This is the view looking up in the direction of Jack Straw’s Castle from where I was standing to take the photo of the Old Bull and Bush. 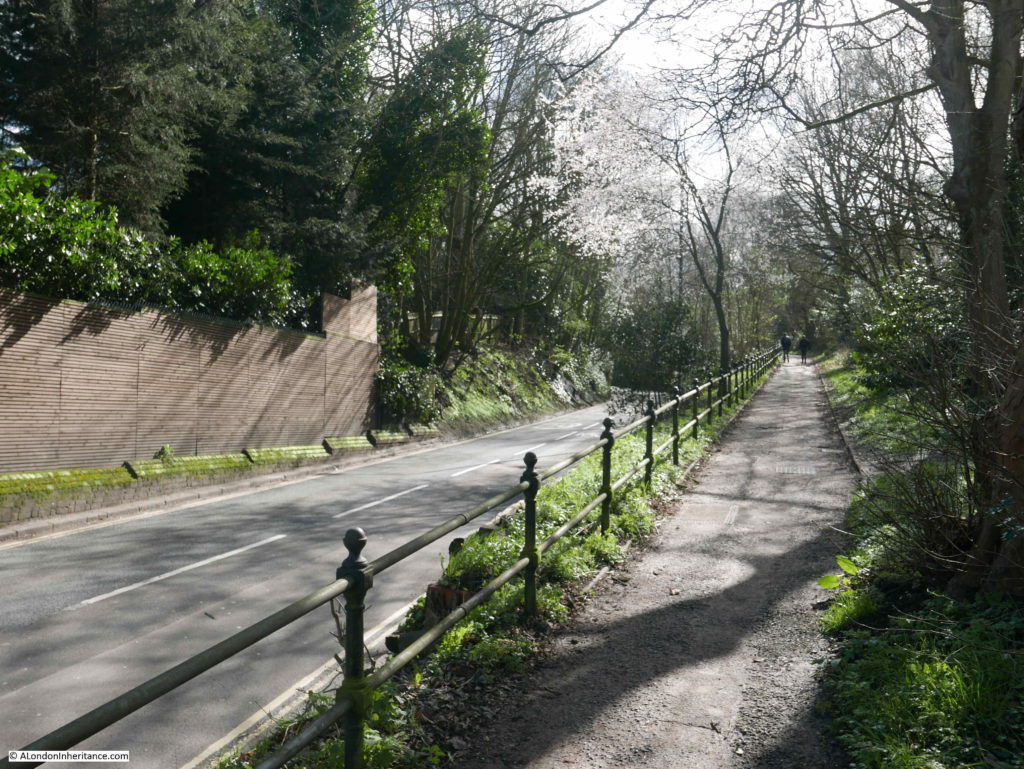 It is a lovely walk on a sunny day up from the pub to Jack Straw’s Castle and Whitestone Pond.

A short terrace of houses hidden in the woods. 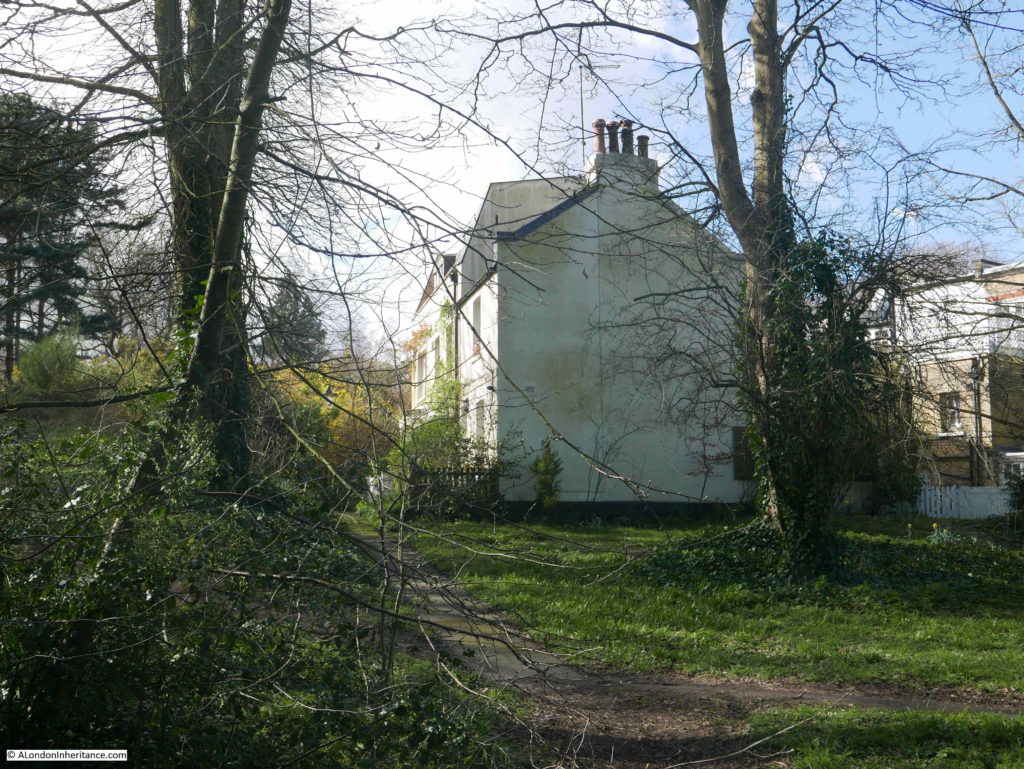 Which contrasts with the very different view walking down the hill from the Old Bull and Bush towards Golders Green station: 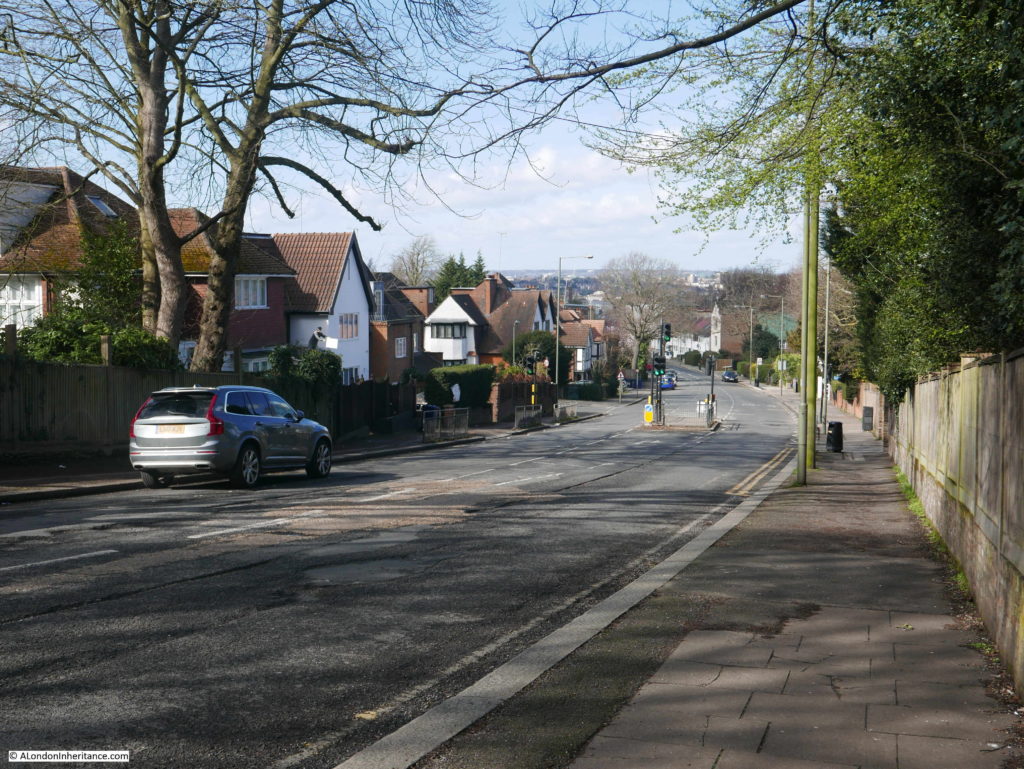 The street leading down to Golders Green station has a wide range of different architectural styles, probably a result of the speculative building on smaller plots of land that developed the area between Golders Green and Hampstead.

I spotted a couple of Blue Plaques in the street. One for Anna Pavlova, the Russian prima ballerina, who spent much of her life living in the Ivy House on North End Road. The following plaque is for the writer Evelyn Waugh who also lived along North End Road. 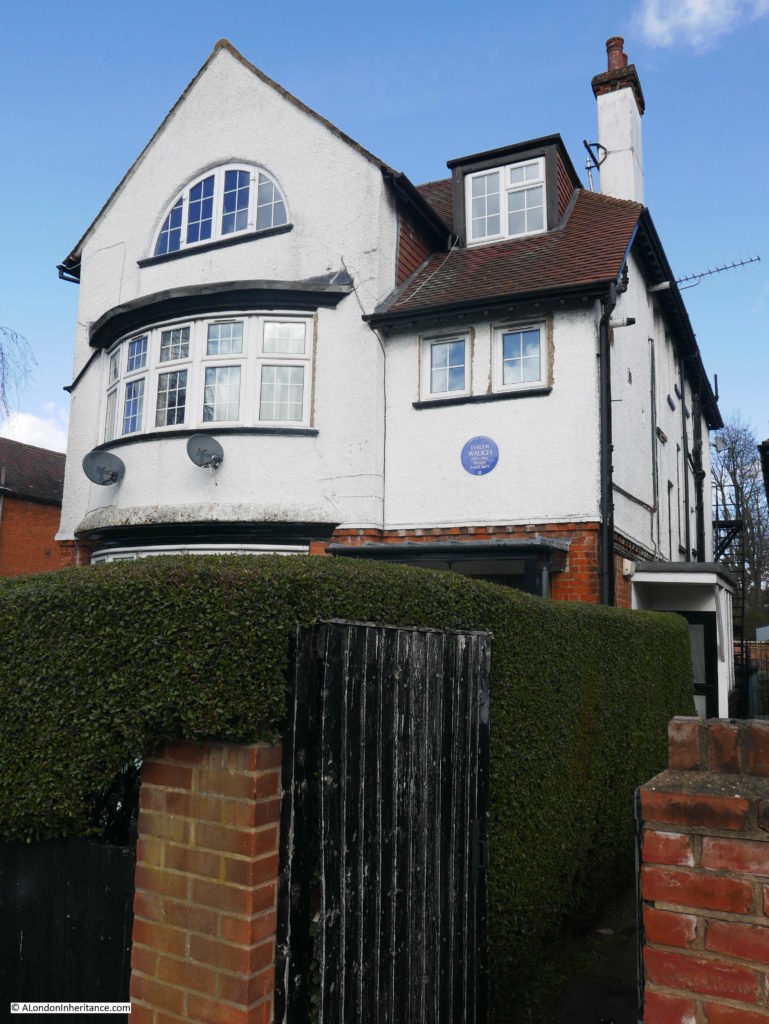 The short walk between Golders Green and Hampstead station is a lovely walk. If you start from Golders Green and walk up the hill, the Old Bull and Bush is a perfect stop before the final climb to the highest point in metropolitan London.

If you take the underground, do not follow the instructions in the “Getting Here” section on the pub’s website, which strangely states that the pub is “Located a quarter of a mile from Bull and Bush Underground station” – this was a planned station that was part built but never opened. Intended to serve building on the heath to the north of the Old Bull and Bush, which fortunately was never built. Next time I am in the pub I will have to ask them for directions to Bull and Bush Underground station (there is a surface building for the original entrance shaft, but it is clearly not a station – a subject for another post, even better if TfL could let me see the old station shafts and tunnels!).

It was relatively quiet during my visit, but if we have the same weather as reported in The Standard from 1906 for the Easter Bank Holiday weekend in a couple of weeks, the Old Bull and Bush, as well as the other pubs around Hampstead Heath will be looking forward to the additional trade that good weather has always generated.

21 thoughts on “Down at the Old Bull and Bush”