My final post from the Netherlands before returning to London for next Sunday’s post. The Airborne Wandeltocht (or Airborne Walking Tour) is an annual event on the first Saturday in September where a series of different length walks takes participants around the sites in Oosterbeek that featured in the events of September 1944.

The first walk took place in 1947 and walks have been held annually since, to commemorate and remember those who fought and died around Oosterbeek and Arnhem, and to raise money for charities associated with military veterans and youth projects. 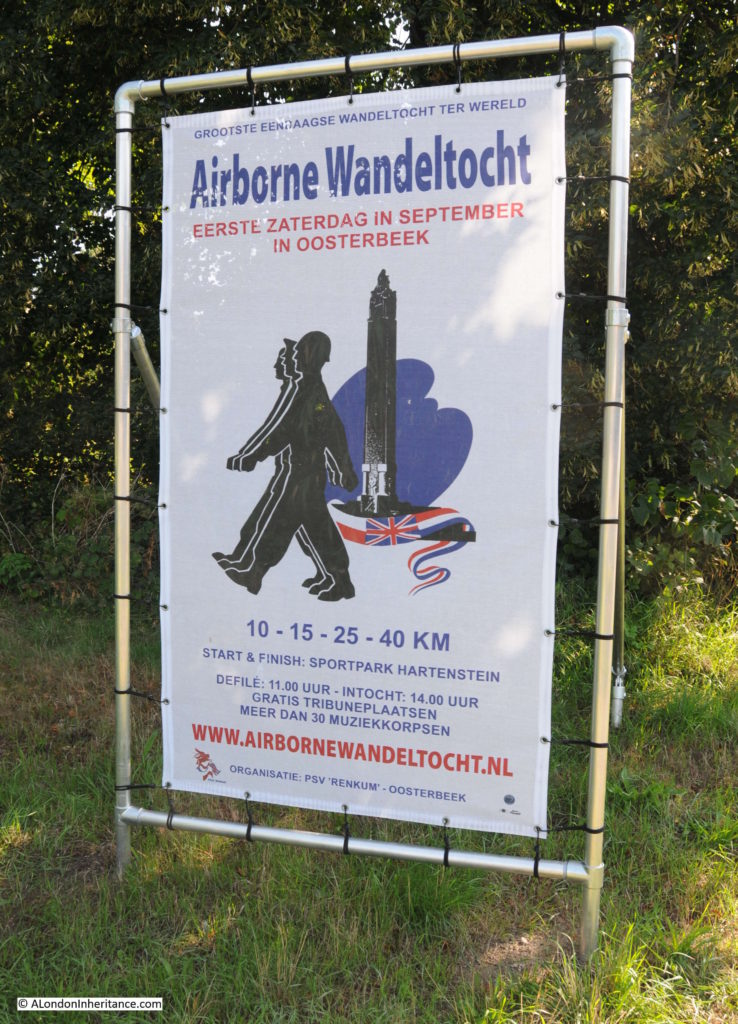 This year, on the 1st September, the 72nd walk took place and 32,809 walkers took one of four route options around Oosterbeek. The routes start at 10km with longer options up to 40km. All routes take in the Hartenstein Hotel (now the Airborne Museum), the Oosterbeek War Cemetery (which I will write about in November) and the Oosterbeek Old Church on the edge of the town and river which featured in the defence of the critical length of river needed to escape to the south.

The 40km walk extends to include the landing grounds to the north west of Oosterbeek.

The walk formally starts at 11 o’clock with a parade along the main road in front of the Airborne Museum, although many of the longer distance walkers will have started earlier in order to complete the walk during the mid-afternoon.

Across the whole event the flags of Poland, the United Kingdom and the Netherlands are very much in evidence to commemorate the airborne forces, the resistance and the civilians who fought and died in and around Oosterbeek.

The opening ceremony makes very clear that this is not a glorification of war, it is to remember those who fought, were wounded and died in the liberation of the Netherlands and the restoration of freedom and democracy. 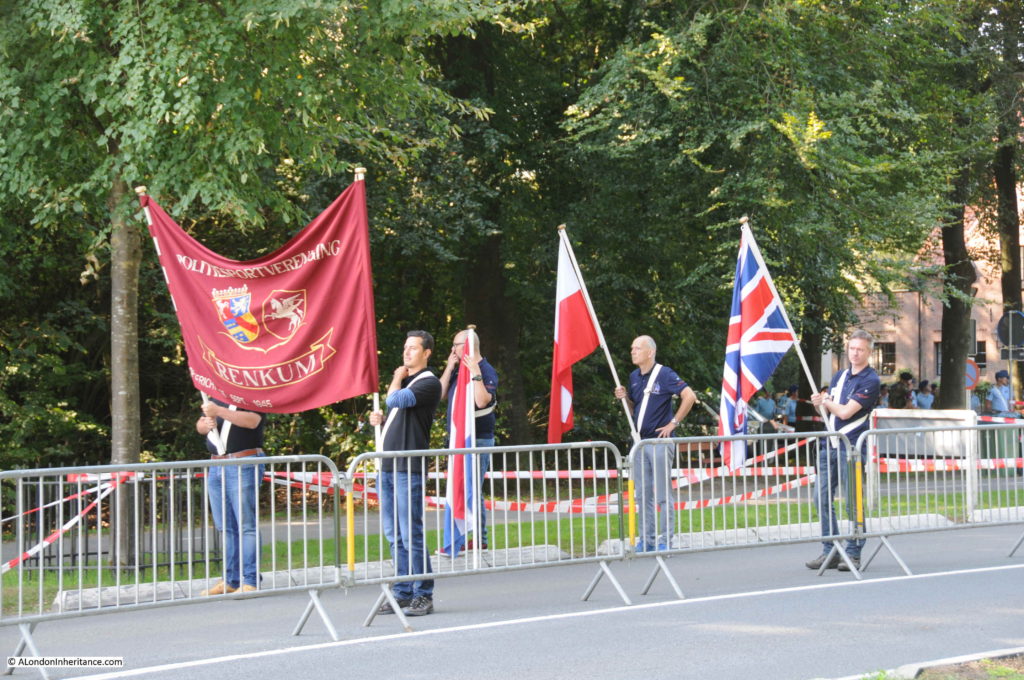 The parade to formally start the walks includes a wide range of groups – those from the emergency services, scouts, charities along with current armed services and cadets, including representatives from the UK, 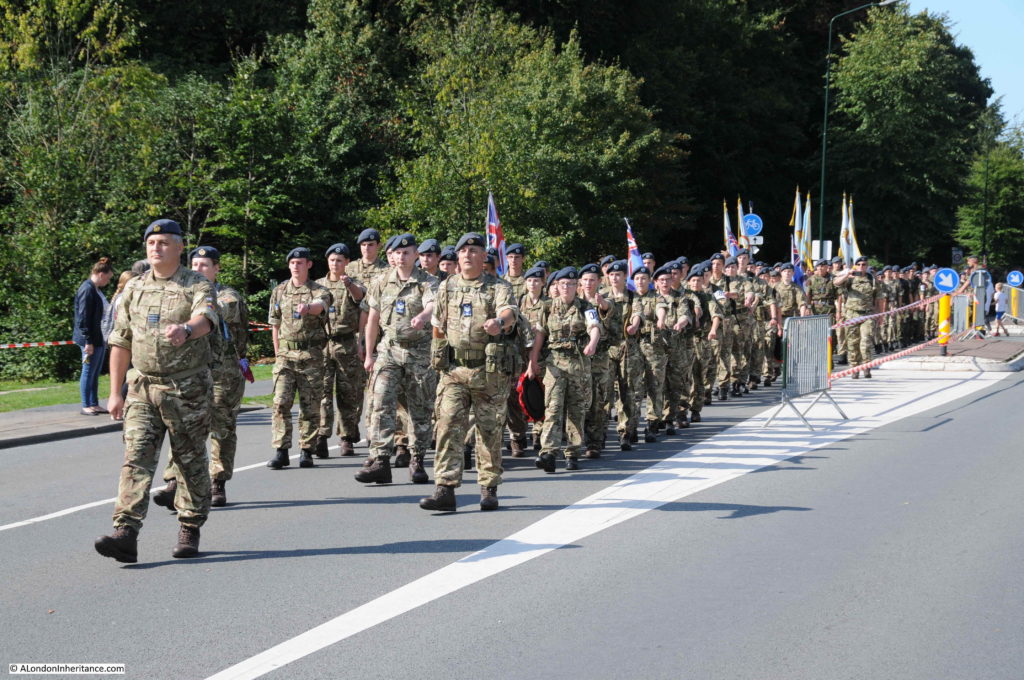 In between there are groups of walkers. The walk is very much a family day out. 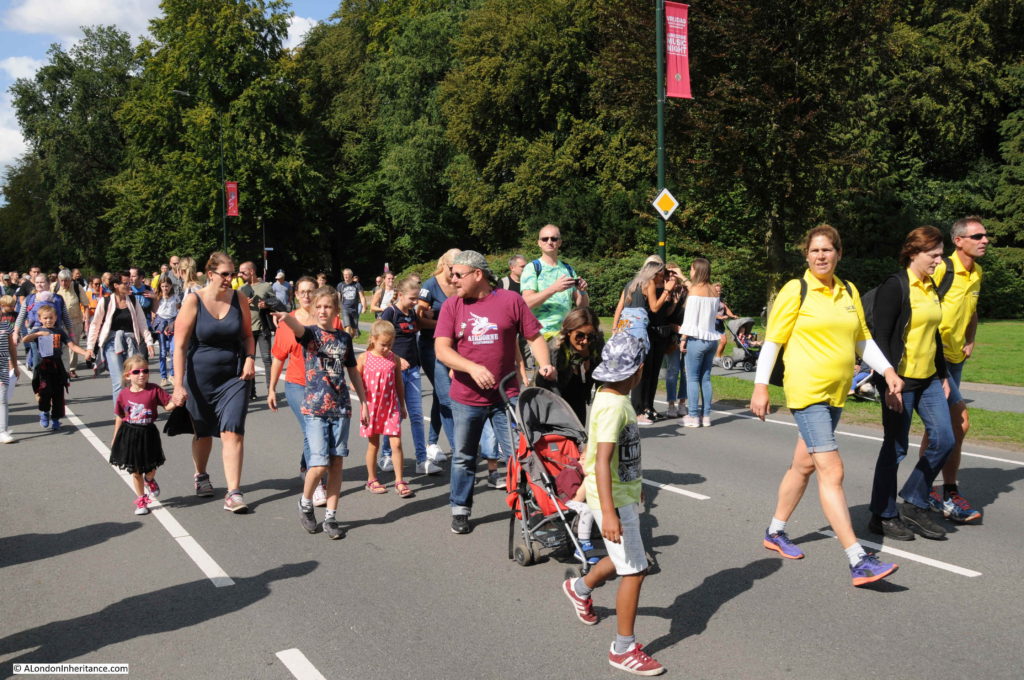 Along with marching bands – a Dutch specialty. 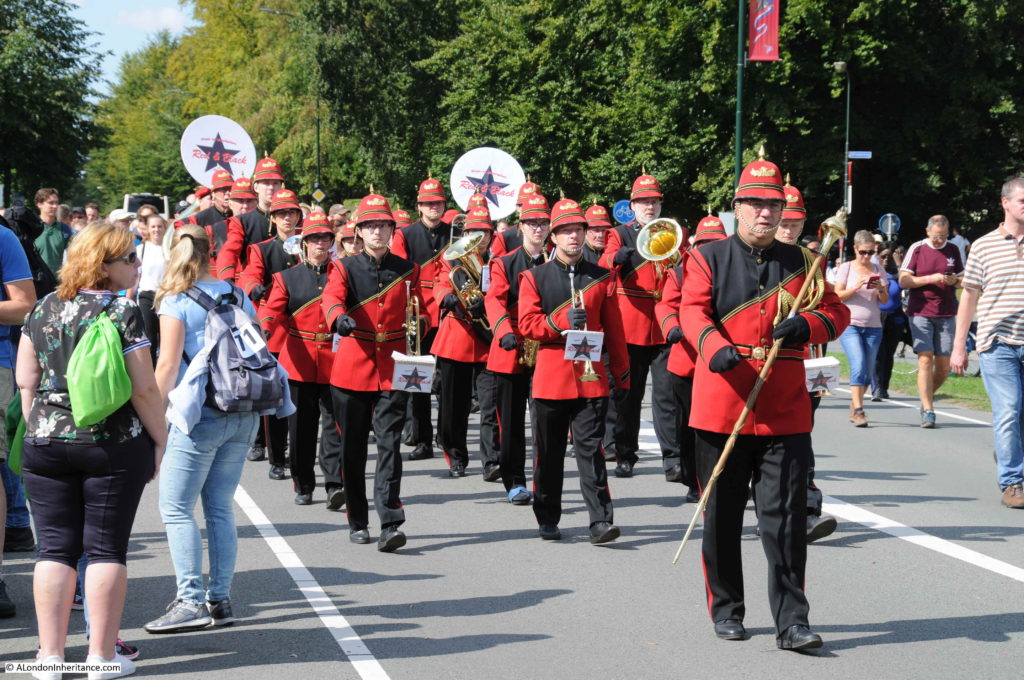 The formal start / end point on the Utrechtseweg, the main road running through Oosterbeek and one of the roads taken by the airborne forces as they moved from the landing grounds towards Arnhem. 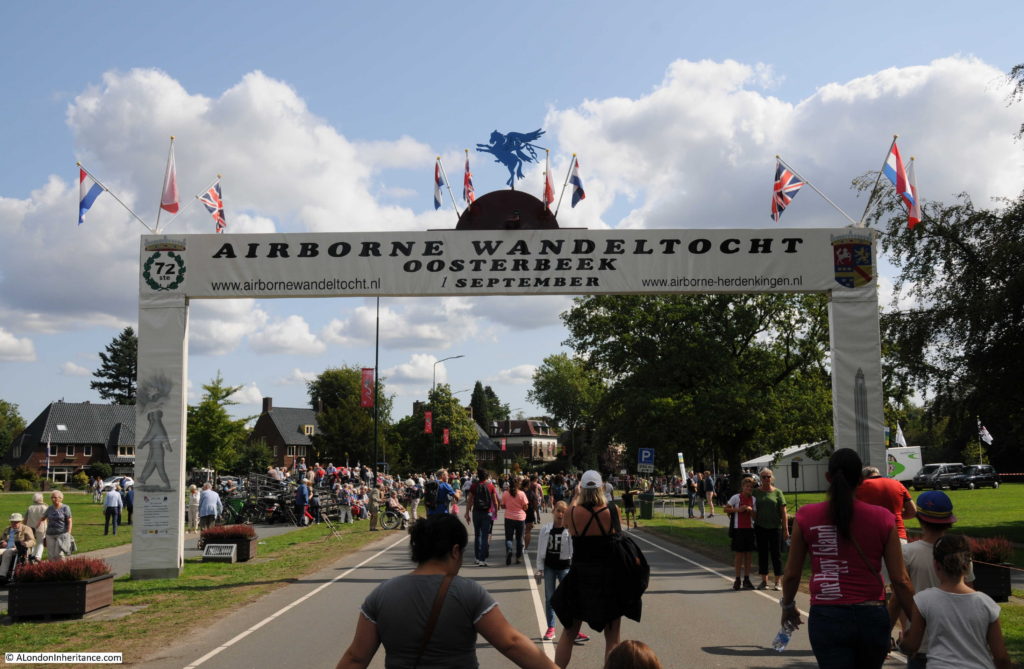 A number of British veterans attend the event each year, they have pride of place in the marquee next to the start / end point. Here, they are standing by the memorial to commemorate the 65th Airborne Wandeltocht – 74 years after they fought in the surrounding area. 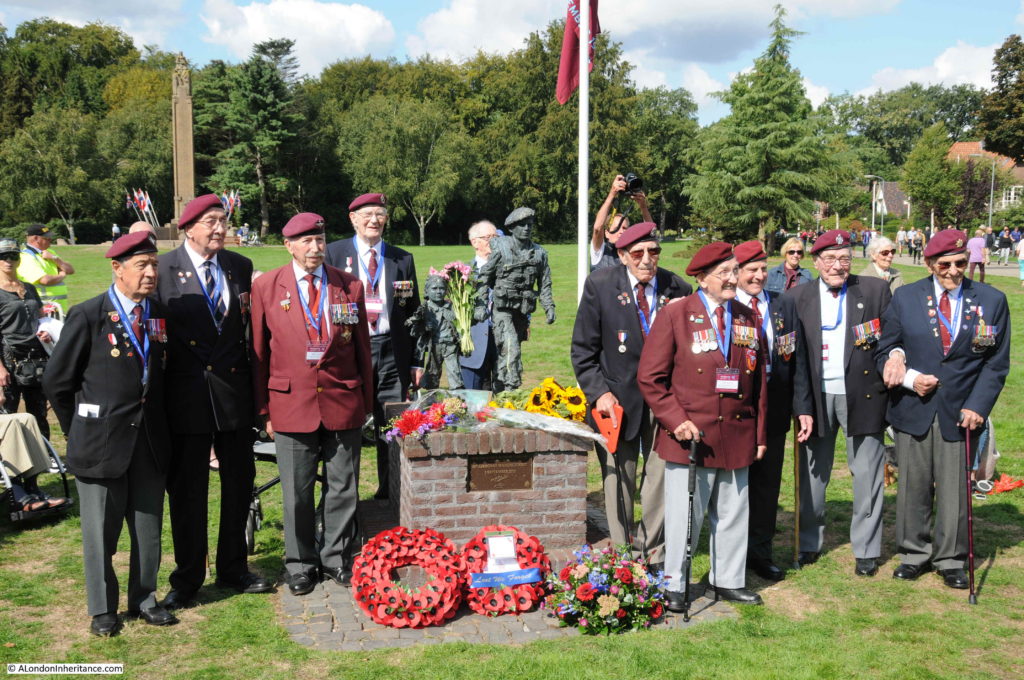 All around Oosterbeek there are permanent signs telling the story of September 1944. In the following photo of a house on Utrechtseweg, a pillar can be seen on the pavement to the right of the front door. 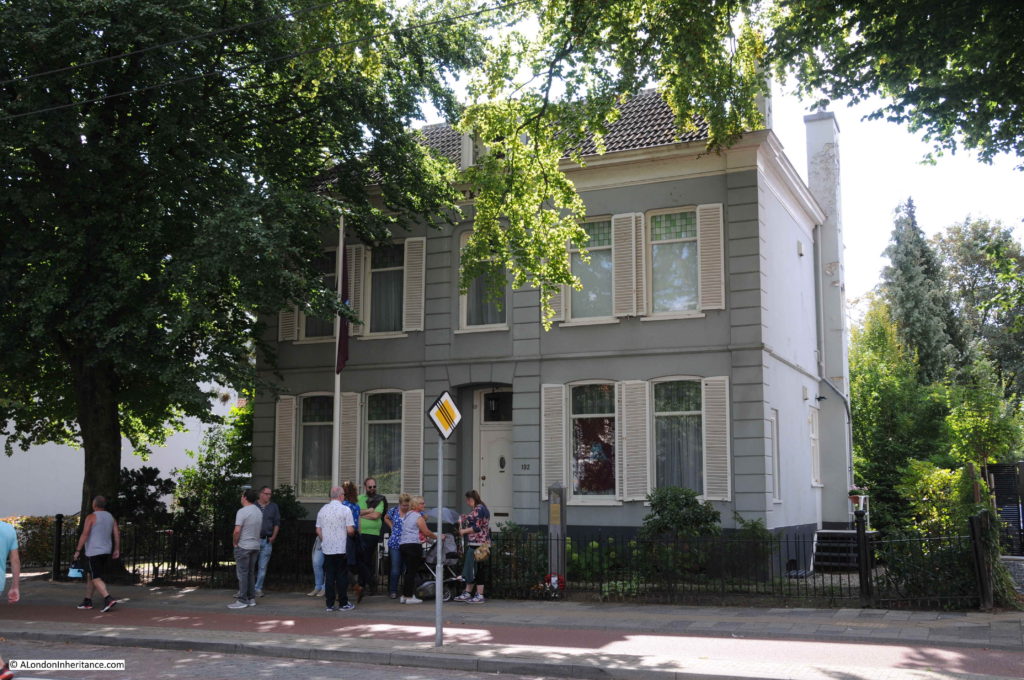 The pillar records that the 10th Parachute Battalion fought here to virtual extinction, and that on the 23rd September the remnants of the battalion were withdrawn. 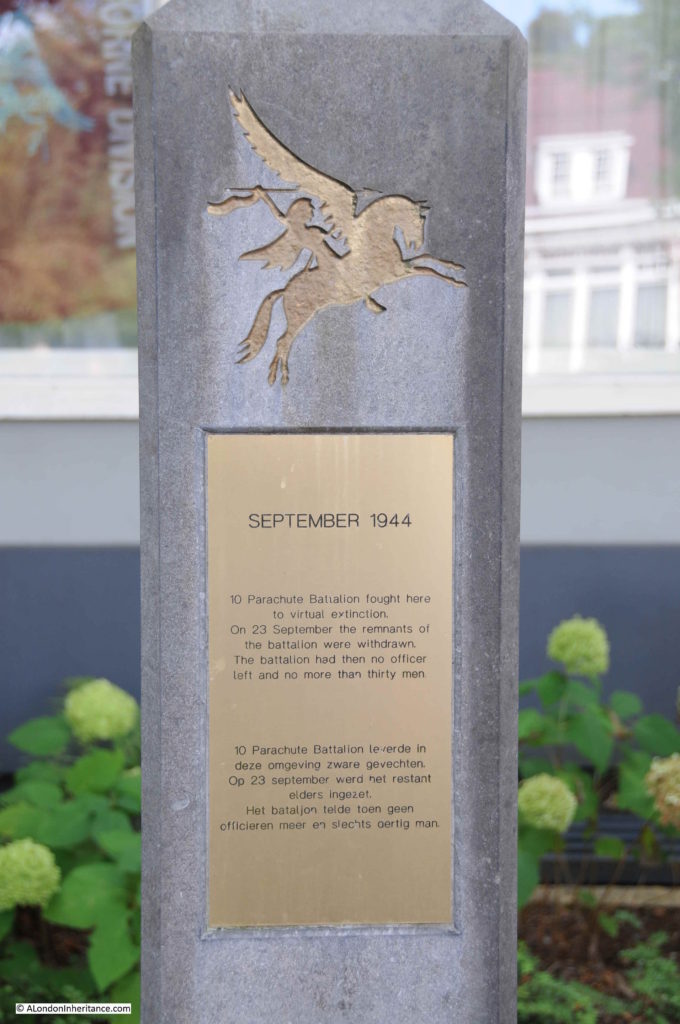 A key point on the route is the Oosterbeek Old Church. The church is on the outskirts of the modern day town, close to the flat stretch of open land that runs between town and river. The church is one of the oldest in the Netherlands, dating at least back to the year 900. In restoration work after the war, pre-christian features were found under the church so the site has been of importance for many centuries.

The church is open on the day of the Airborne Wandeltocht and all four routes pass by the church. It makes a good resting point and a fascinating location to explore. 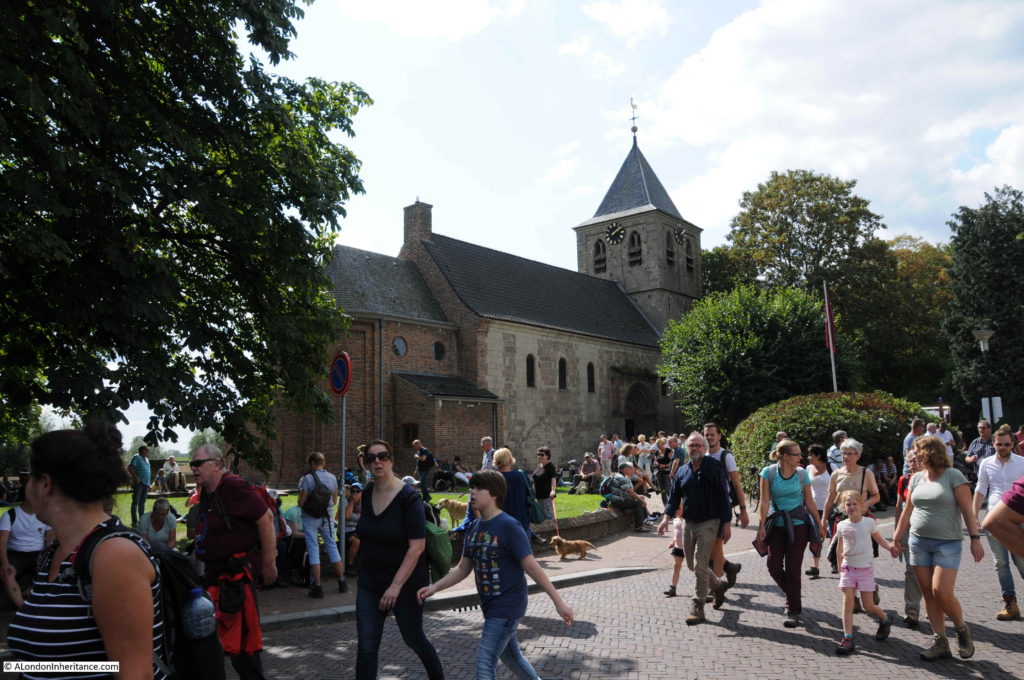 As well as the permanent pillars, there are also photo signs at various points along the walk showing what the site looked like following the events of September 1944. The church was badly damaged in the fighting. 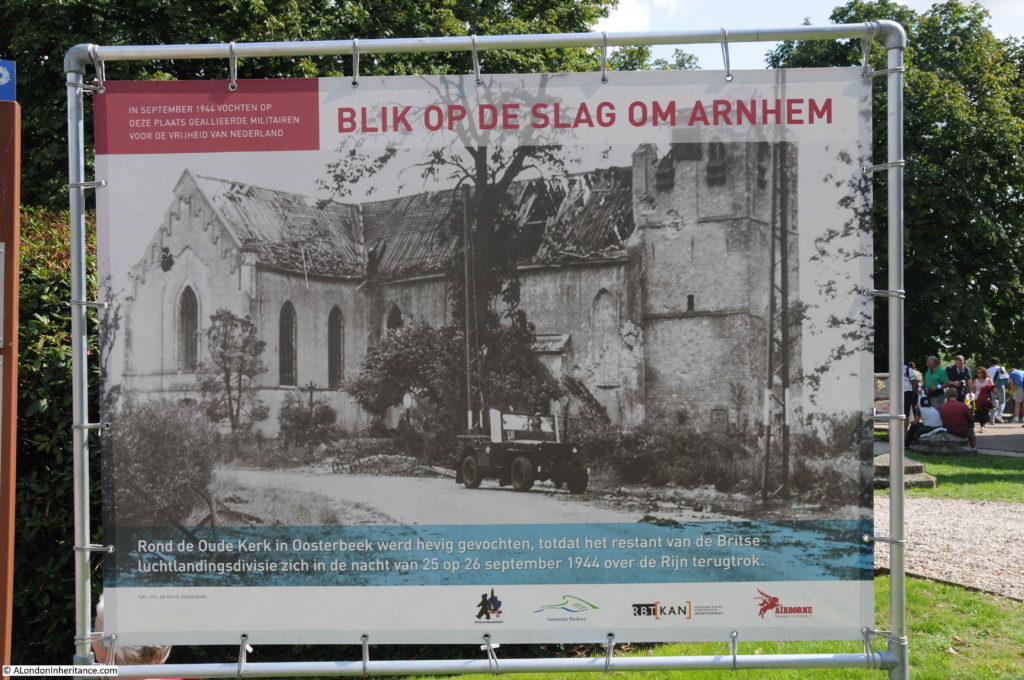 There are still plenty of bullet holes to be found in the walls. 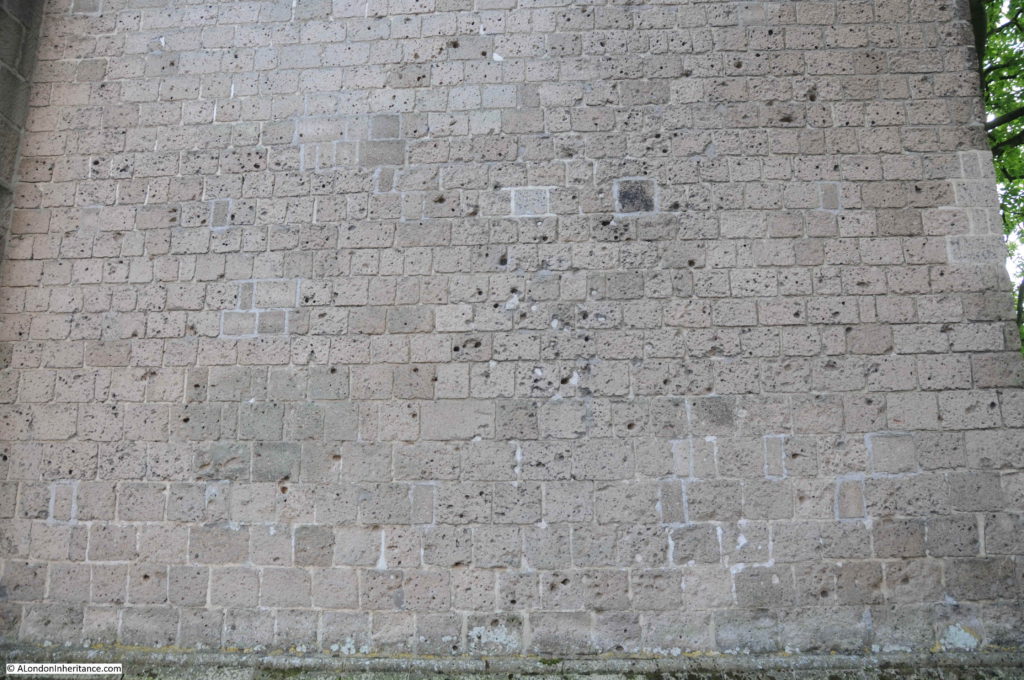 The church was a central point in the fighting to defend the gradually shrinking pocket of land held by the airborne forces. Keeping a length of the river and the route open to withdraw to the river was critical in making sure that the airborne forces were not cut off in Oosterbeek. Towards the end of the battle, the width of land occupied by the British, and the Polish forces that had made it across the river was down to 700 yards. 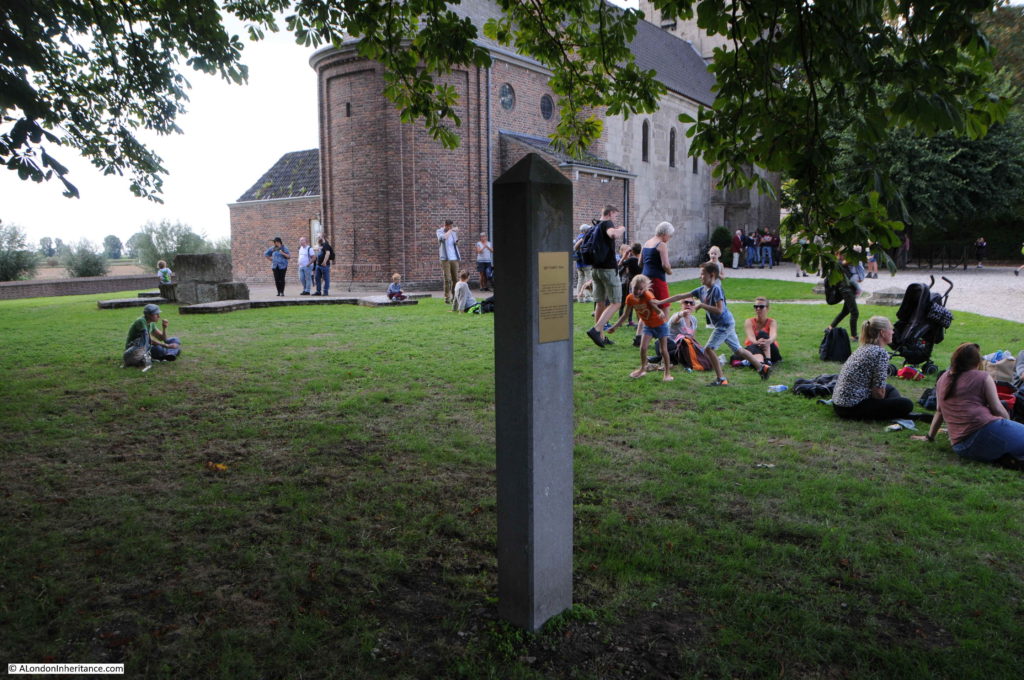 The restored interior of the church – very busy on the day of the Airborne Wandeltocht. 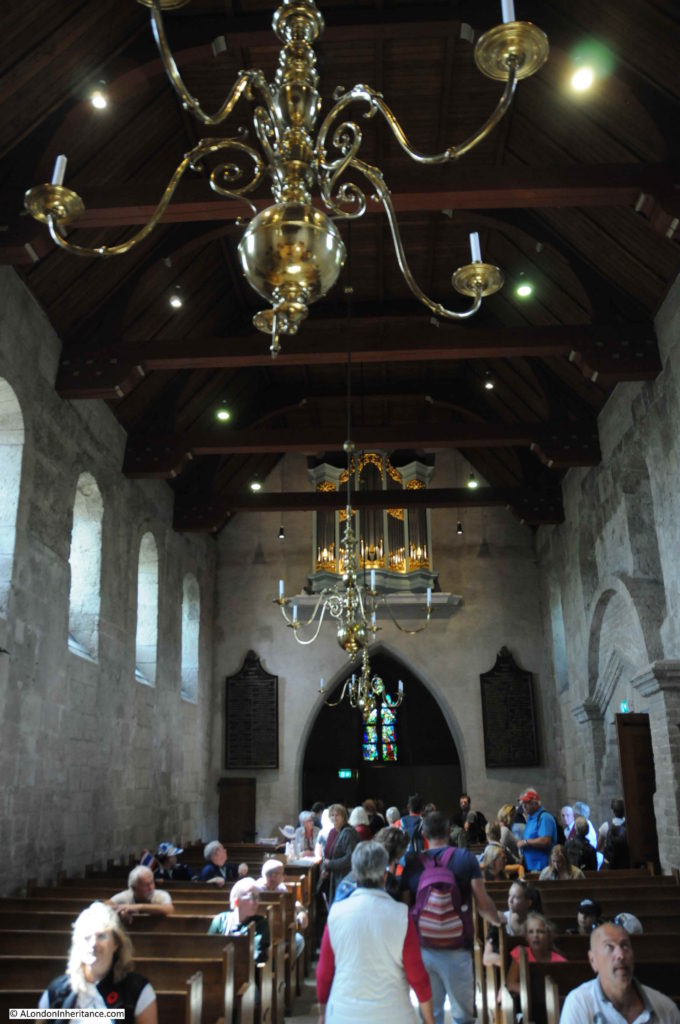 The Pegasus emblem of the Parachute Regiment can be found across Oosterbeek and Arnhem. In the Oosterbeek Old Church it is on the kneeling cushions, wall memorials and on the font. 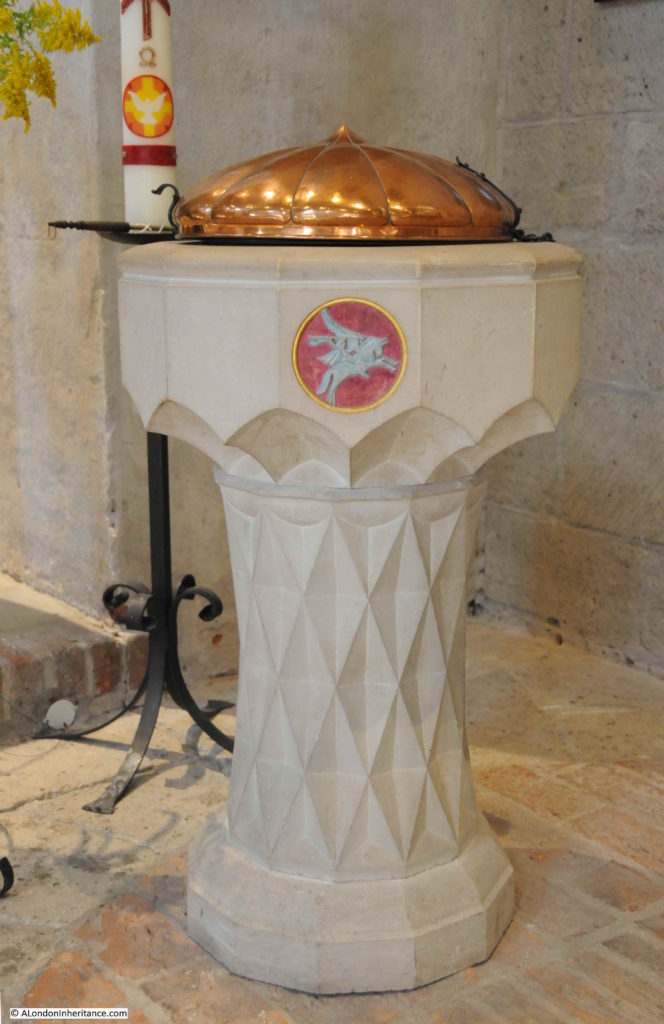 Another view of the church. 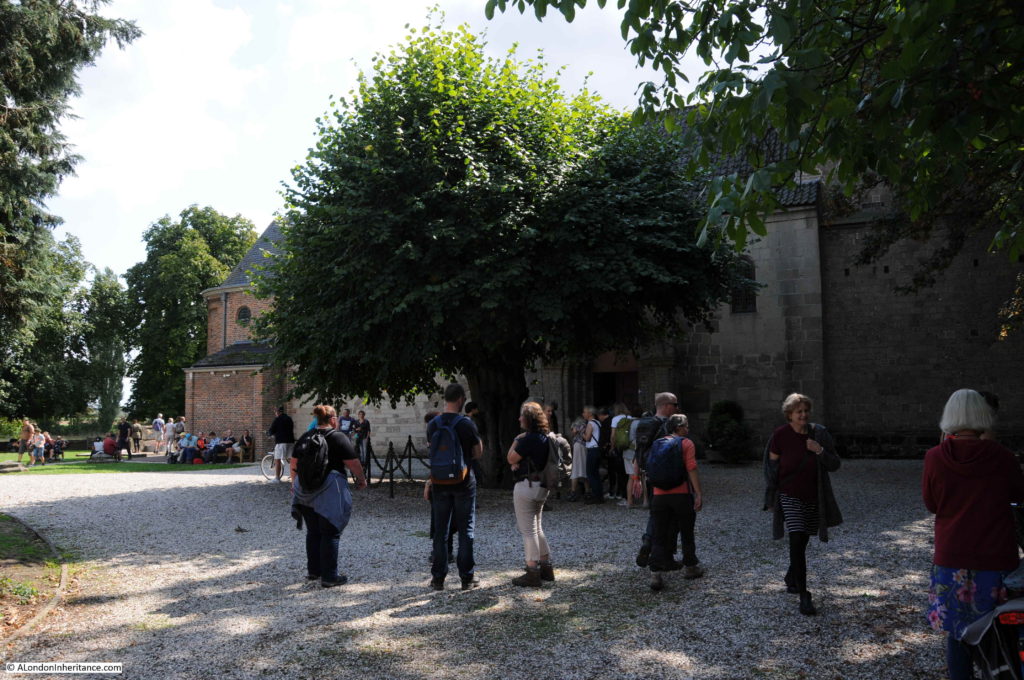 A small plaque underneath the tree reads:

“In the thick of the fighting when a patrol of five Airborne warriors was standing by this lime tree, a mortar shell hit the place and killed four of them.

Another memorial in the churchyard to the British, Polish and Dutch men and women “who fought a grim battle around this ancient church to liberate the Netherlands from Nazi tyranny.” 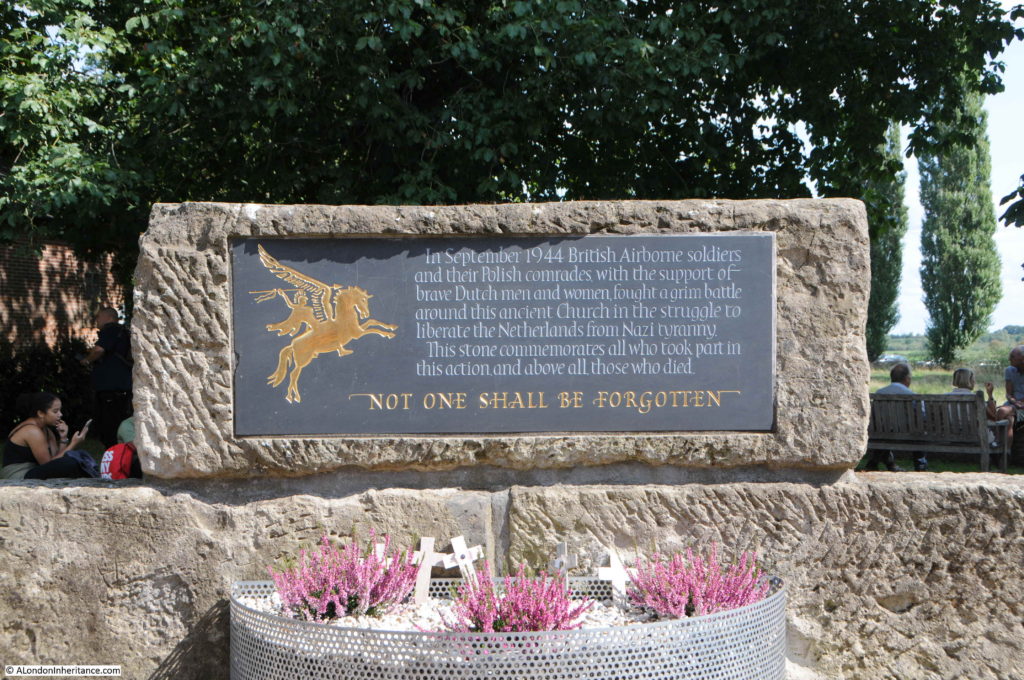 The flat lands between the church, the southern edge of Oosterbeek and the river in the distance. A bridge over the river can be seen in the distance. It was over this land that the final overnight withdrawal took place, across the river to the southern shore where advance parties of the British 2nd Army and the Polish forces who had landed a few days earlier, had taken the river bank. 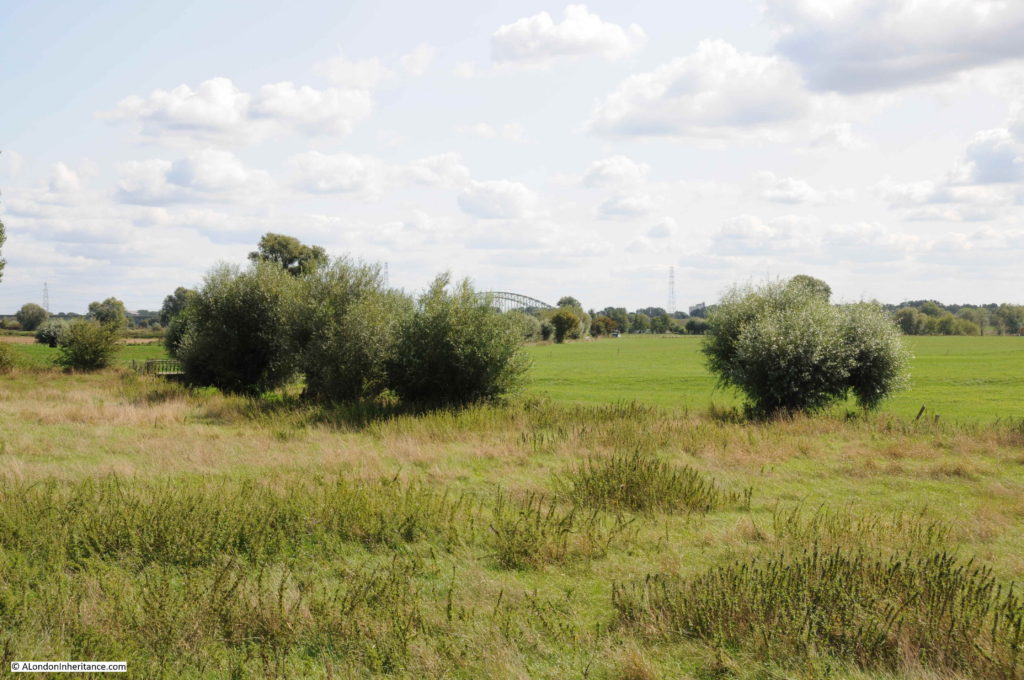 The Airborne Wandeltocht threads its way through the streets of Oosterbeek, walking through streets that were once the scene of deadly fighting. Pegasus flags of the Parachute Regiment fly from the majority of houses. 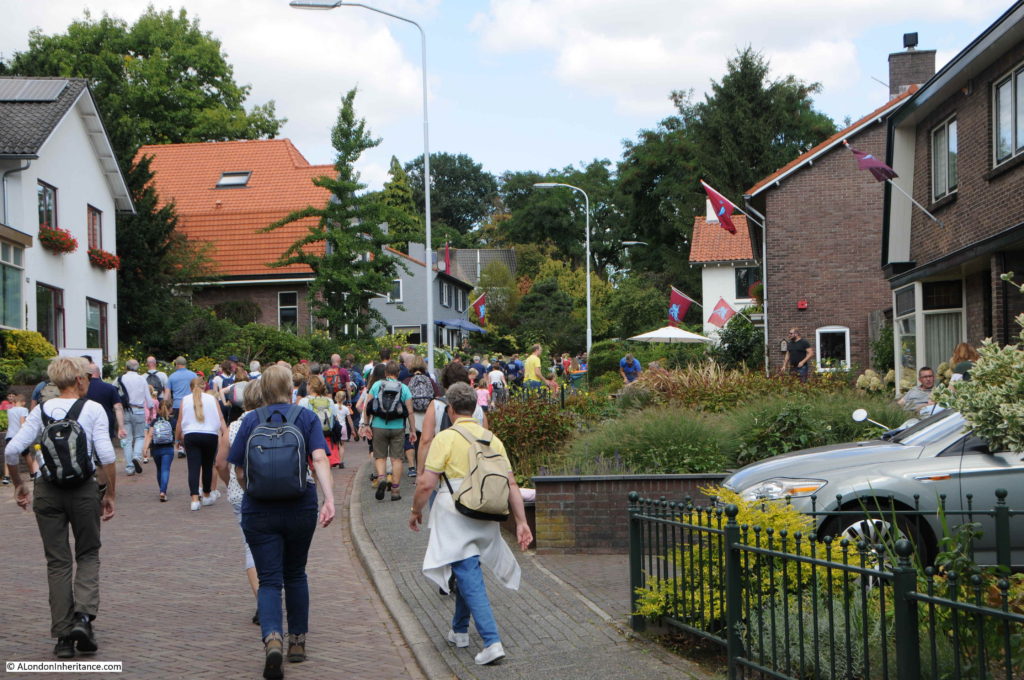 Another example of the information posters along the route showing the same scene in 1944. 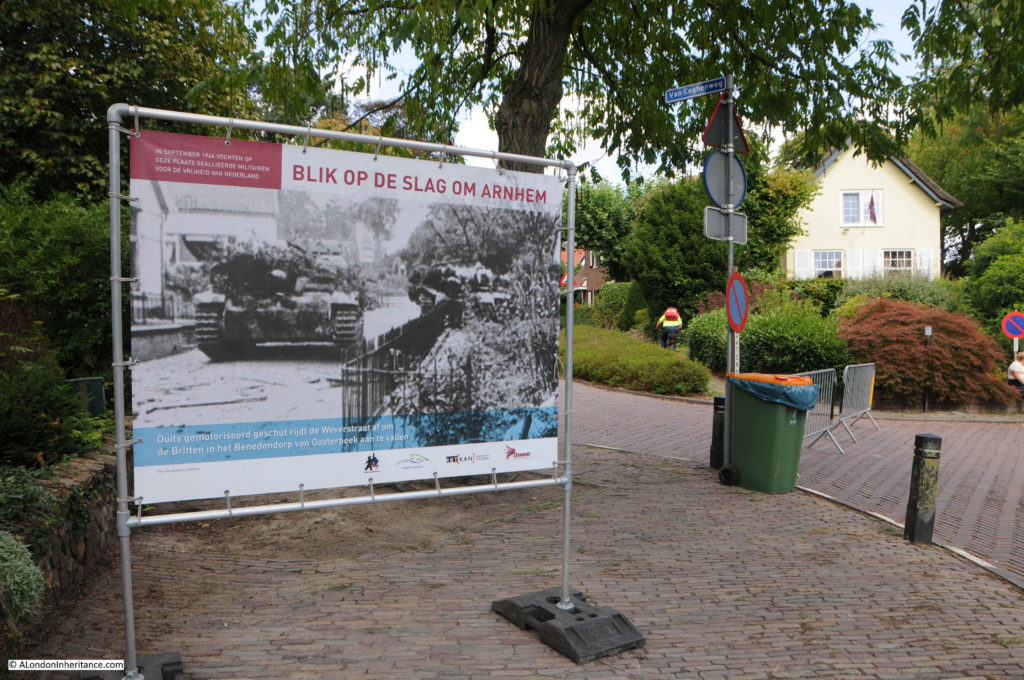 Crowds of walkers returning through the central streets of Oosterbeek: 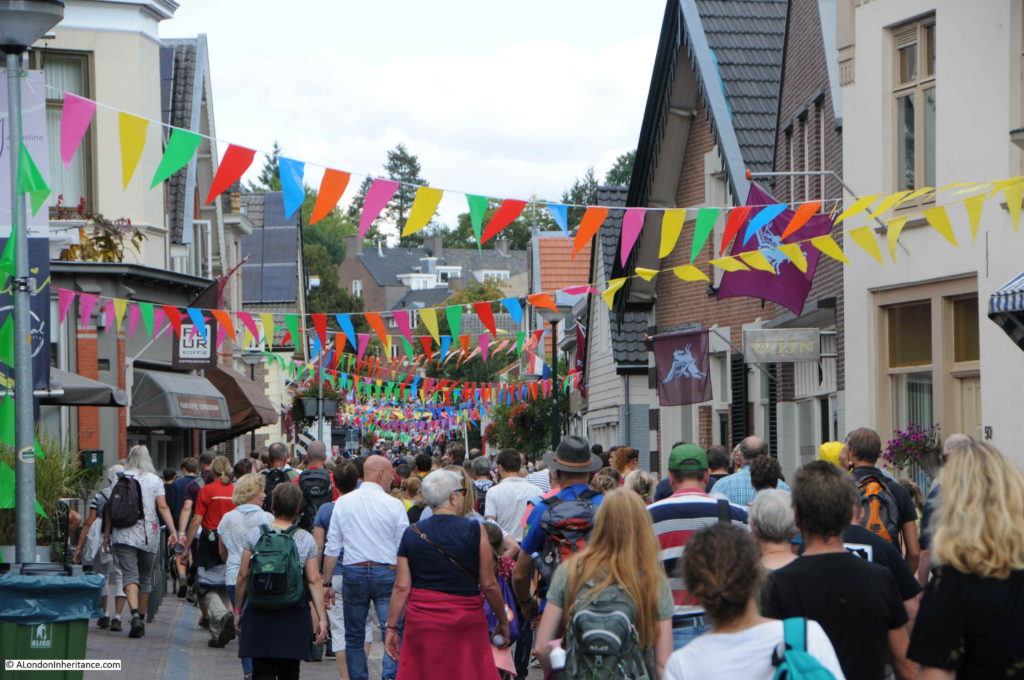 Returning through the formal end point of the Airborne Wandeltocht. The walkers return to the main assembly field to collect their medals. 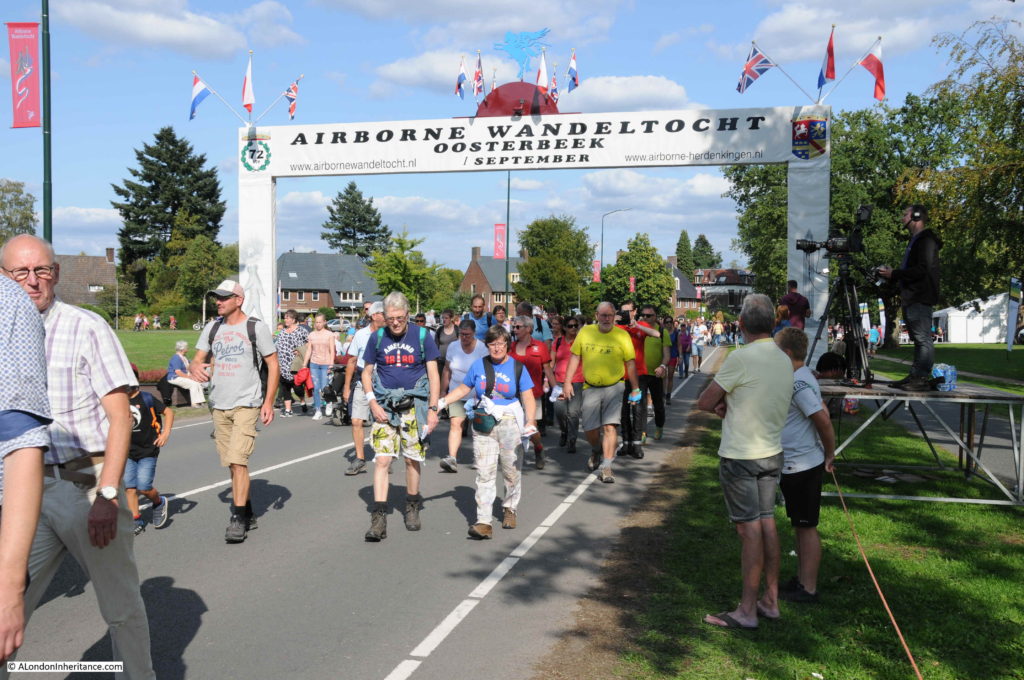 Not something you expect to see, a bagpipe band in the Netherlands. These are the Seaforth Highlanders of Holland. They were formed to commemorate the Seaforth Highlanders of Canada, who were part of the Canadian armed forces who liberated parts of the Netherlands during 1945. They were formed in Vancouver in 1910 following the large number of Scottish immigrants to Canada. 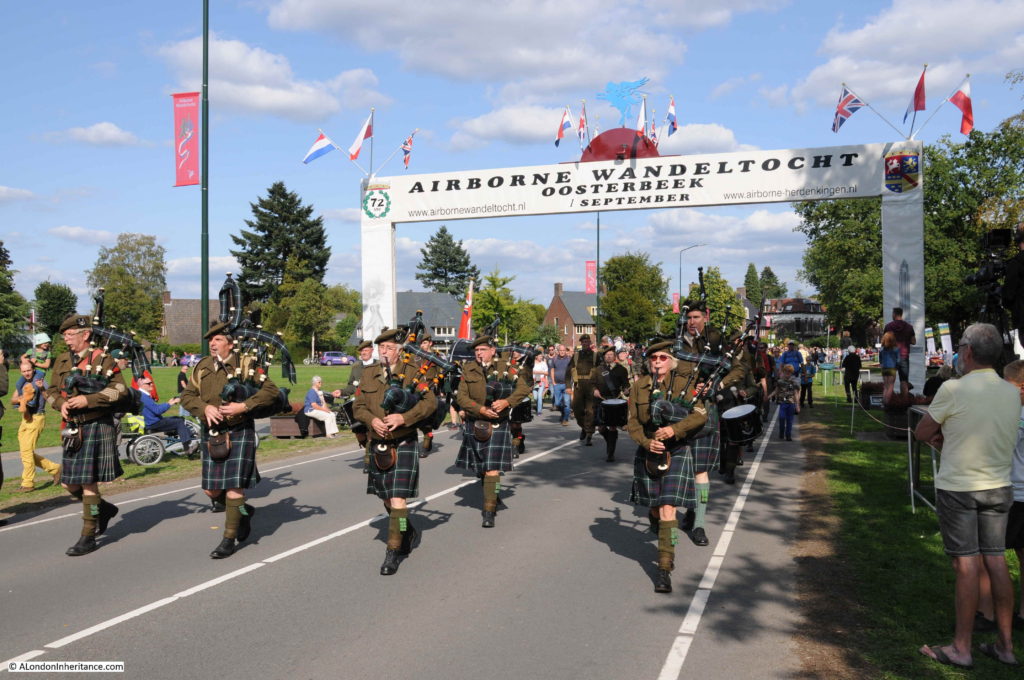 Although the Airborne Wandeltocht is just one of many events held during September to commemorate the impact of Operation Market Garden in Arnhem and Oosterbeek, it is by far the biggest event with this year well over 32,000 people of all ages taking part.

The walk does an excellent job of weaving together the history of September 1944, events at key locations and remembering the sacrifices of the British and Polish airborne forces and the Dutch civilians.

Next year’s event will take place on the first Saturday in September and details can be found on the web site of the Airborne Wandeltocht. (There is an English version, but Google translate does a good job with the full site).