Before returning to London, a quick chance to explore the Thames Estuary and discover some of the legacy from the last war that has survived the last 70 years.

As the Waverley left Southend, the sky and sea seemed to merge even more into a uniform grey with only the occasional boat adding any colour.

Soon after leaving Southend Pier there is the wreck of a part of the Mulberry Harbours that were used directly after the D-Day landings in France to provide temporary harbours until one of the French ports could be taken.

This particular part is a Phoenix Caisson. These were very large concrete hollow boxes that were used to provide the support to the harbour. They were manufactured at three locations in the UK including Tilbury on the Thames, however this Caisson was being brought from Immingham on the Humber to Southsea (Portsmouth on the south coast) ready for transport across the channel.

Whilst being transported from Immingham it sprang a leak and was towed into the Thames and beached in its current position. 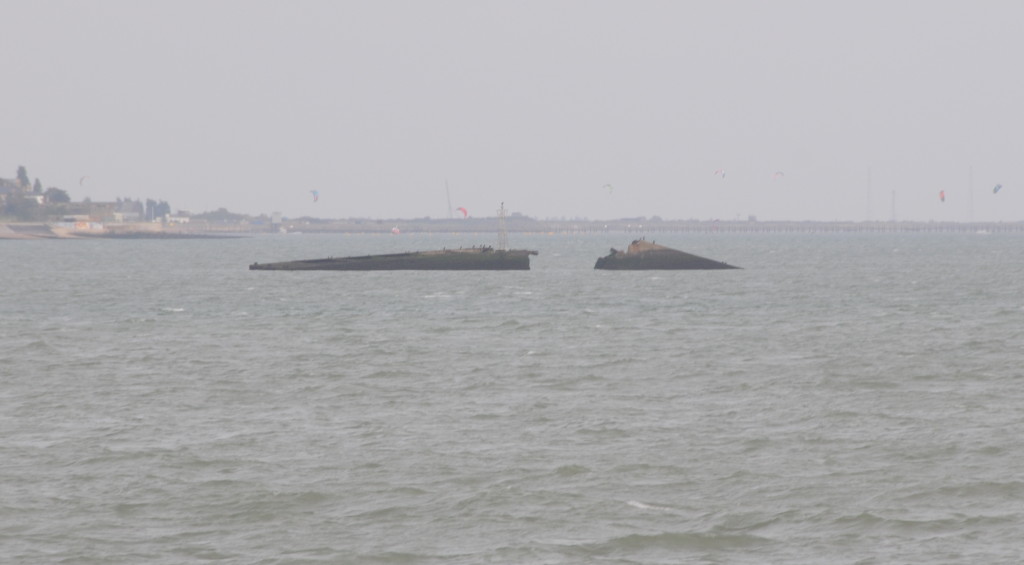 There is a much more potentially destructive relic of the last war about 5 miles from Southend. This is the wreck of the SS Richard Montgomery.

The SS Montgomery left the US in August 1944 loaded with over 6,000 tonnes of munitions and explosives. Arriving off Southend the ship was instructed to moor off Sheerness. On the 20th August, the Montgomery started to drag her anchor and drifted to a sand bank where she became stuck as the tide went down and the due to the uneven distribution of weight and insufficient water to provide support, she broke her back and was stranded on the sandbank with her full compliment of explosive cargo.

There was an attempt to remove some of the cargo, however before this was complete the ship finally broke in two and the salvage attempt was abandoned leaving a very considerable volume of munitions and explosives (high explosive bombs, fragmentation bombs, phosphorus bombs, pyrotechnic signals, flares and fuses) on the ship, which remain there to this day.

The ship has an exclusion zone marked by buoys and is regularly surveyed to check the stability of the structure.

I am not sure if anyone really knows what would happen if there was an explosion, many years ago I heard stories that it would break many of the windows in Southend.

It is an eerie sight passing the wreck and seeing the masts of the SS Richard Montgomery still standing above the water. 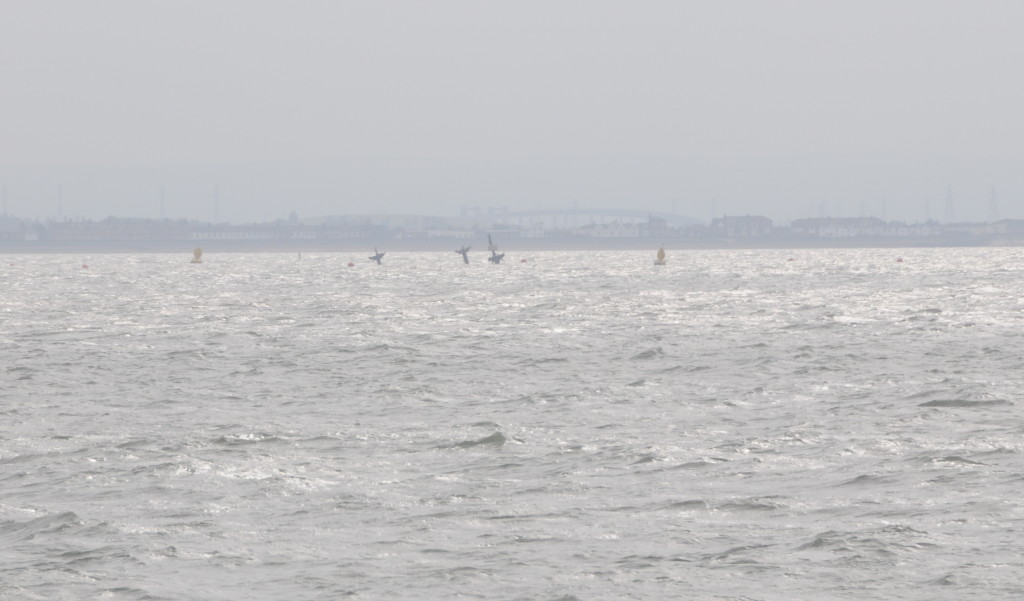 Further out from Southend are the Maunsell Forts.

These were operated by the Navy and Army during the last war to provide anti-aircraft gun emplacements in the estuary. The River Thames provided an ideal navigation route to central London for enemy bombers. Even at night and with a blackout, the glint of the moon on the water of the Thames would lead directly to London.

These forts were the idea of Guy Anson Maunsell, a highly innovative civil engineer who had worked on a range of civil engineering projects in the UK and abroad, including in 1931, the widening of Putney Bridge.

The initial requirement was for a set of Naval Forts further out to sea than the Army forts. They were operated by the Navy with the objective of preventing German mine laying in the approaches to the Thames. Four of these were constructed, of which two (Rough Sands and Knock John) survive. From the Thames Estuary the Knock John fort can be seen as a rather enigmatic shape in the distance. 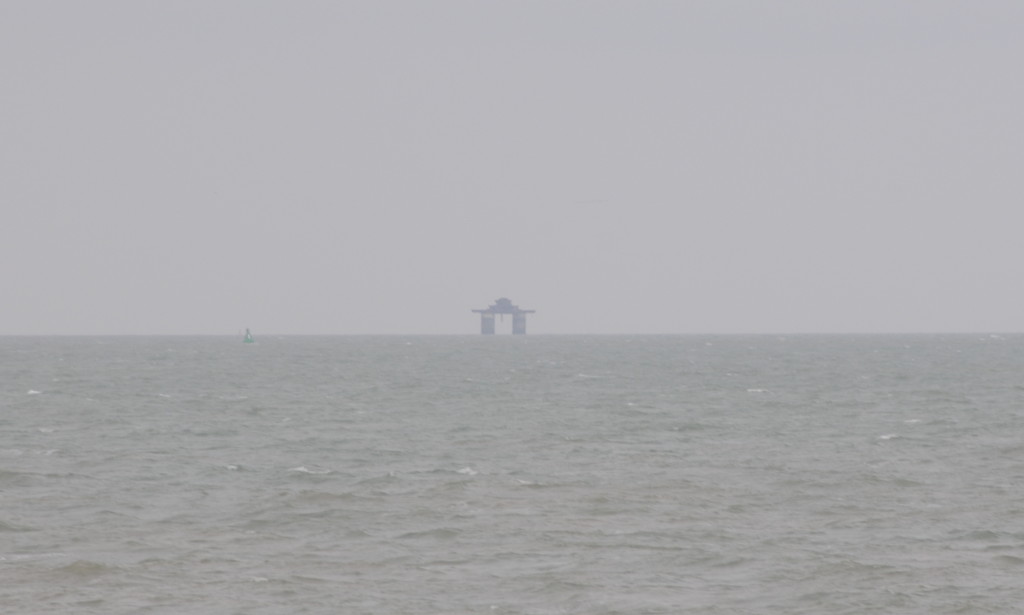 The Army forts followed the Naval forts. The aim of these forts was to attack approaching bomber forces with an anti-aircraft gun mounted on each of the individual forts.

Setting out from Southend, the first fort is Red Sands. 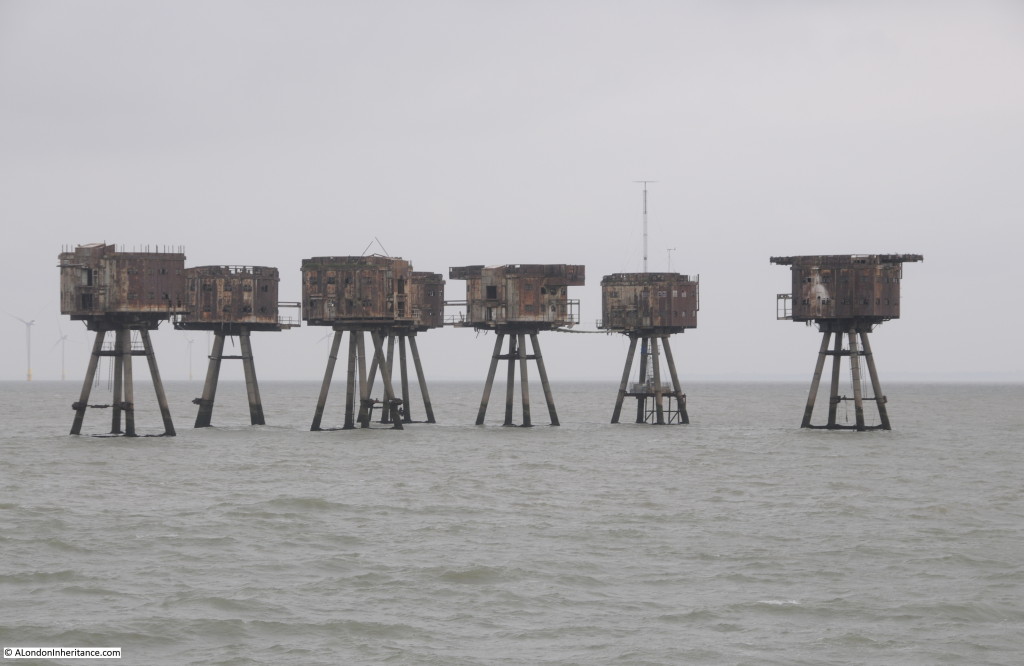 The forts were built on the Thames in a disused and derelict cement factory that Maunsell had found at Red Lion Wharf at Northfleet, close to Gravesend. The forts were constructed, towed out and installed on site between May and December 1943. 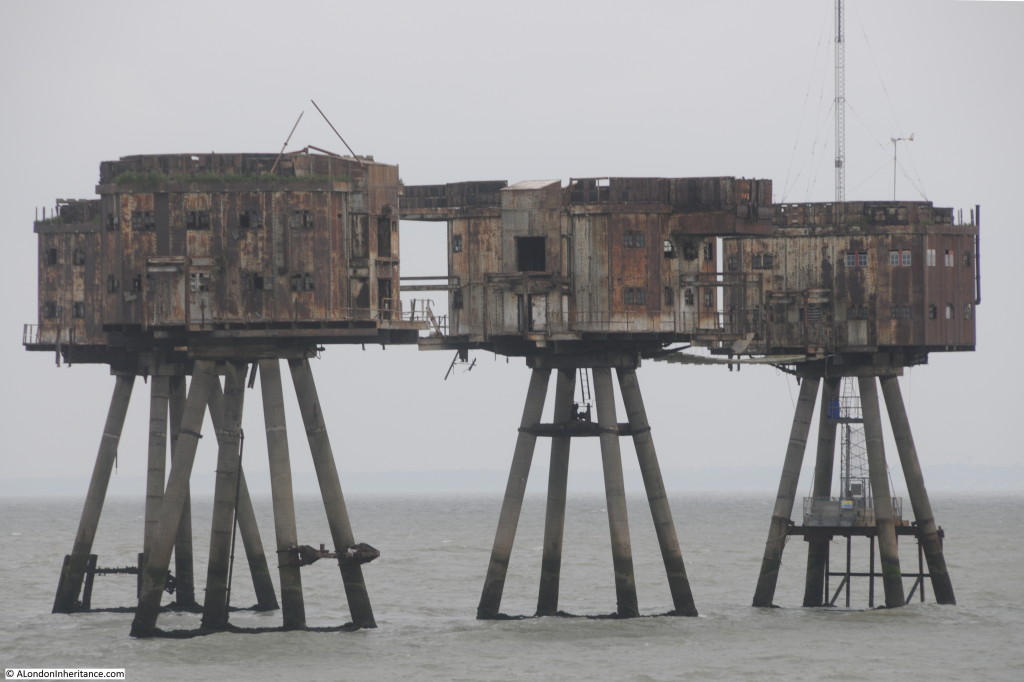 A central observation tower was surrounded by towers, each with an anti-aircraft gun installed. Walkways were run between the individual towers to provide access across the complex. 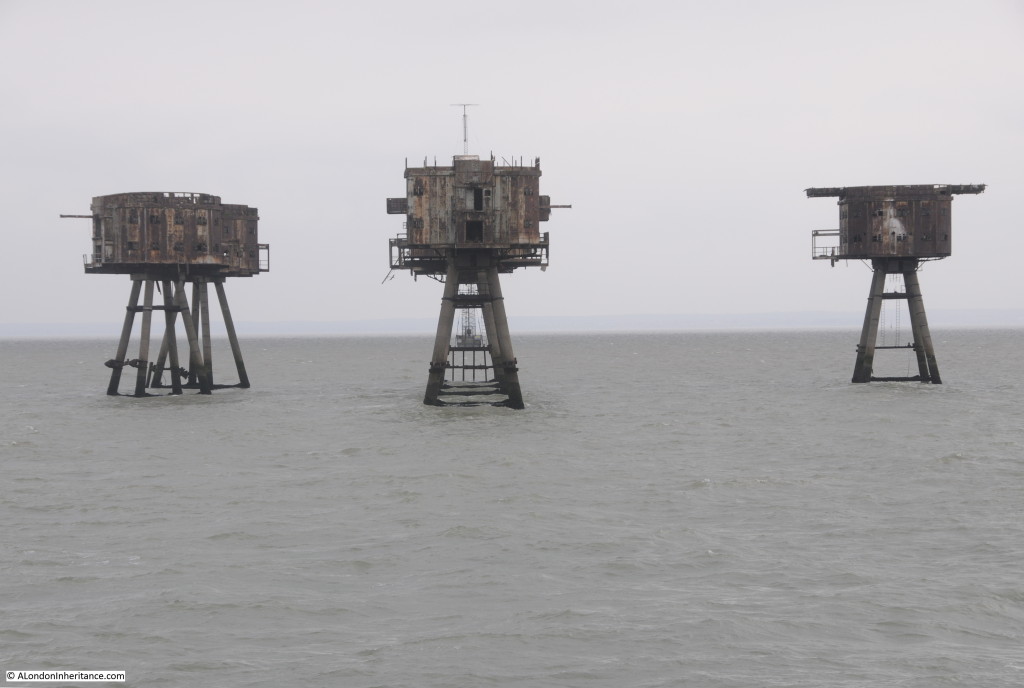 Although land was visible from the forts, this must have felt like an isolated and remote location for those based on the forts, coupled with long periods where there would not have been any enemy activity.  It cannot have been very comfortable on a cold and stormy winters night.

The crew of the forts would spend 4 weeks on-board, then a 10 day break ashore.

Although the forts were operational after the main period of the blitz on London they were successful during the later V1 campaign when at least 30 of the V1s were shot down on their way to London. 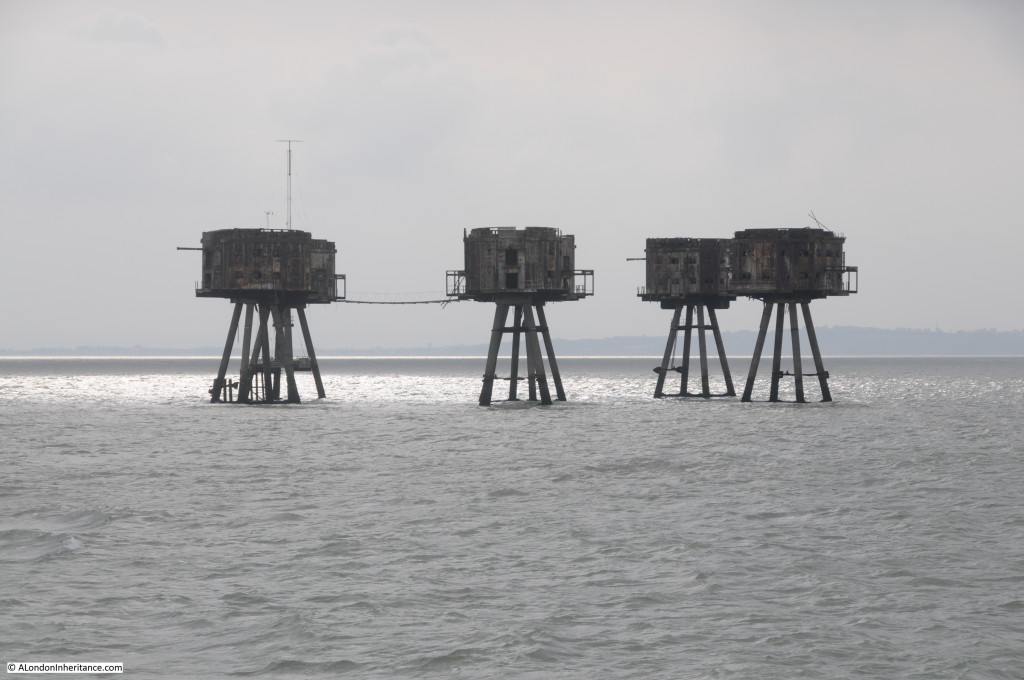 I passed the forts during my 1978 journey down the Thames, with the following photo from this time. Most of the walkways were then still in place. The weather was also better, just to show that there is some colour in the estuary. 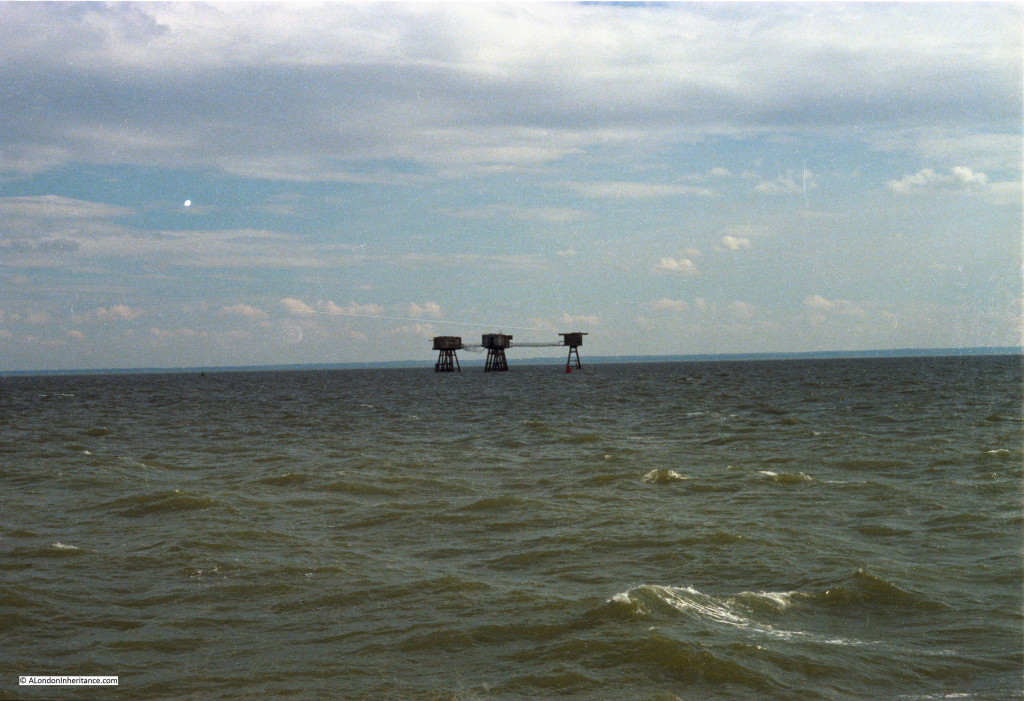 The Thames Estuary provides an example of how power generation has changed over the last century. Initially, power stations were local to population centres. London had a number of smaller power stations, (my grandfather worked in one in Camden). These were replaced by larger stations such as Battersea and Bankside. Power stations then started moving away from centres of population to places such as Littlebrook and Tilbury that we passed along the river. These have now closed and generation moved out to sea with a number of offshore wind farms located in the wider Thames Estuary.

Emerging out of the gloom are the 30 wind turbines of the Kentish Flats Offshore Wind Farm. 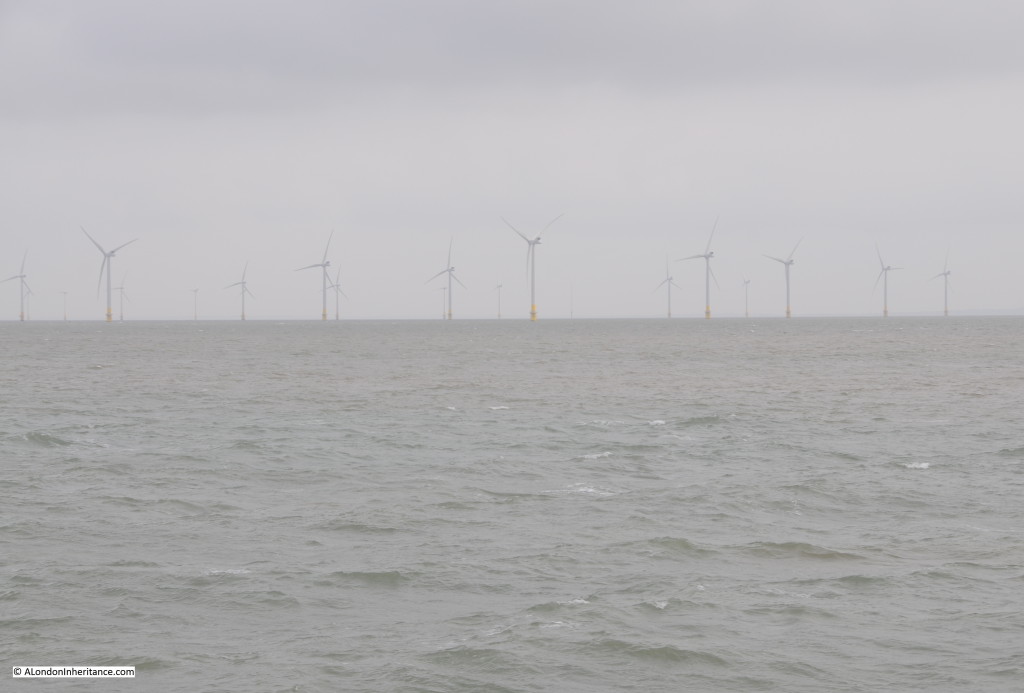 Further out in the Estuary is the Shivering Sands fort. This was the last fort is be completed and as Maunsell wrote at the time:

“the final floating out operation sailed on the afternoon on December 13th, whereafter it transpired that the last of the Towers was grounded on the Shivering Sand in bright moonlight and bitter cold shortly after midnight on December 14th.”

Shivering Sands lost one of its towers in 1963 when it was hit by a ship. The stump of the tower still pokes from the water: 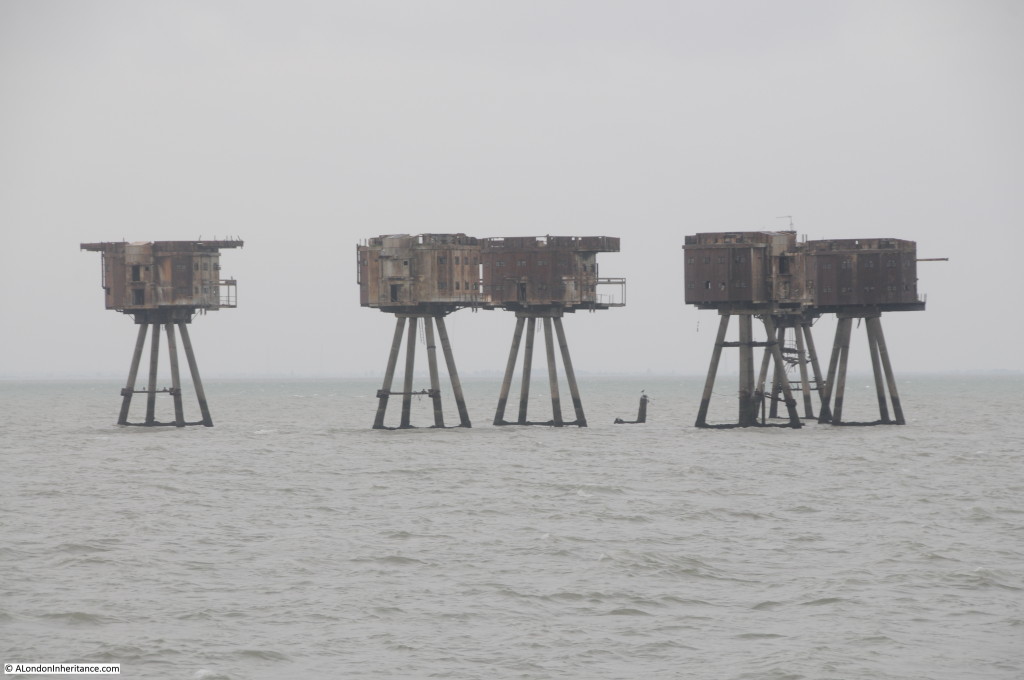 Passing Shivering Sands fort with Red Sands in the distance. Viewed from a distance they could almost be the Martians from H.G. Wells book War of the Worlds, striding across the Thames Estuary ready to wreak havoc on Southend. 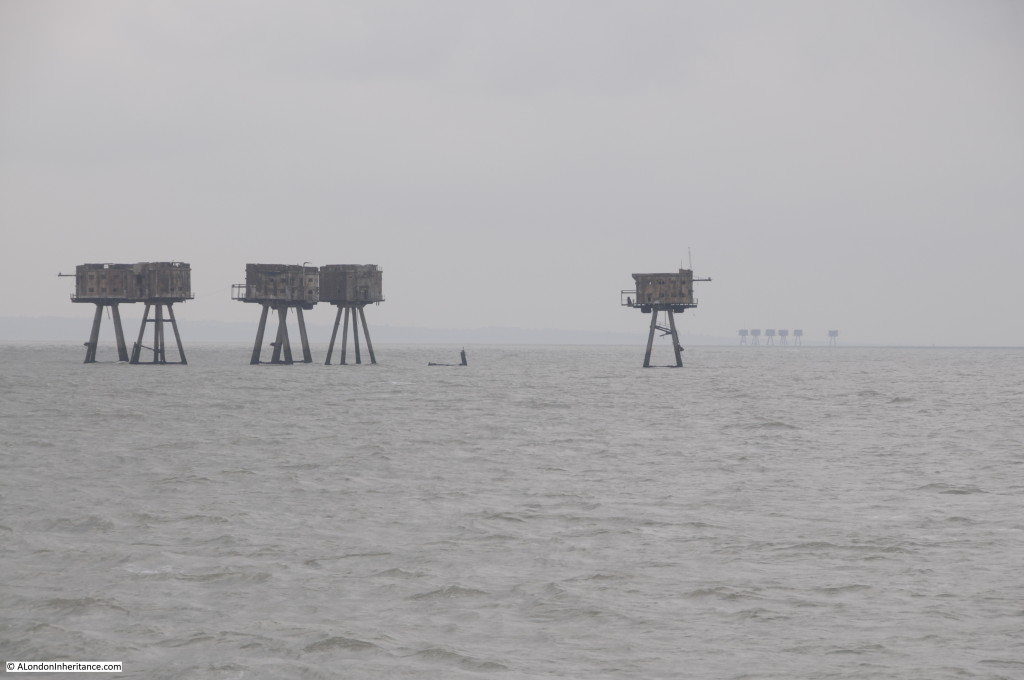 Seventy years of construction in the Thames Estuary from wartime defences to peaceful electricity generation. 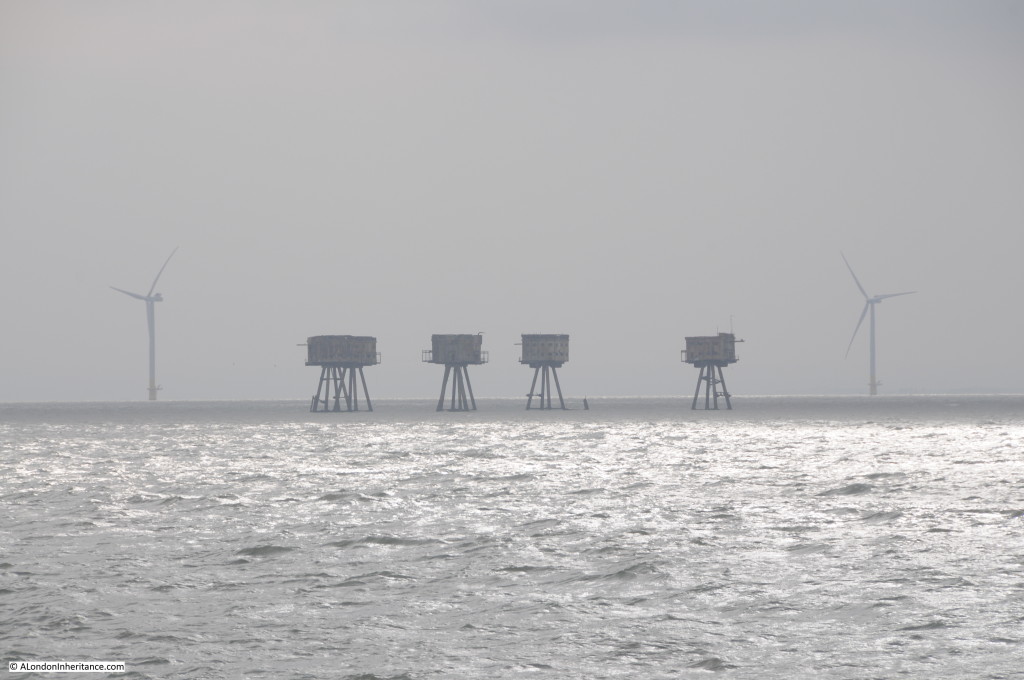 After the war, Guy Maunsell and a couple of partners set-up their own business and were much in demand to work on major construction projects across the world.

In London, G. Maunsell & Partners were responsible for the Hammersmith Flyover. When this was completed in 1961 it was the first such pre-cast segmented concrete structure in the UK. Further work followed on the Westway from Paddington to White City.

Guy Maunsell died in 1961. His company continued independently, working on projects such as the Docklands Light Railway and the Jubilee Line, until the year 2000 when the company was bought by the US firm AECOM.

The Imperial War Museum has a number of photos of the forts in use (reproduced under the IWM’s Share and Reuse, non commercial licence): 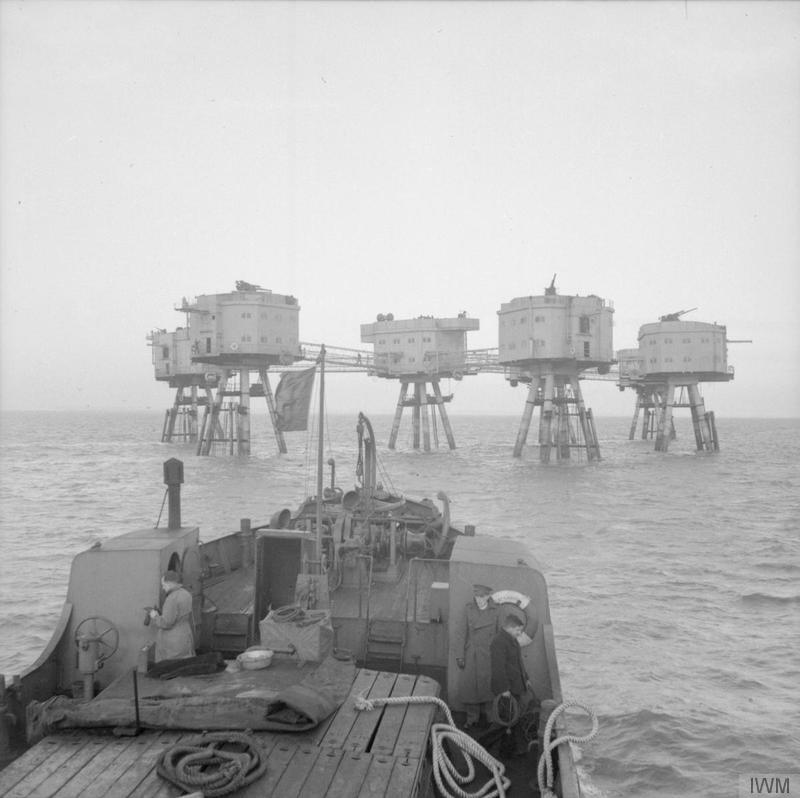 View from the top of one of the towers showing the anti-aircraft gun mounted on each tower © IWM (H 34542): 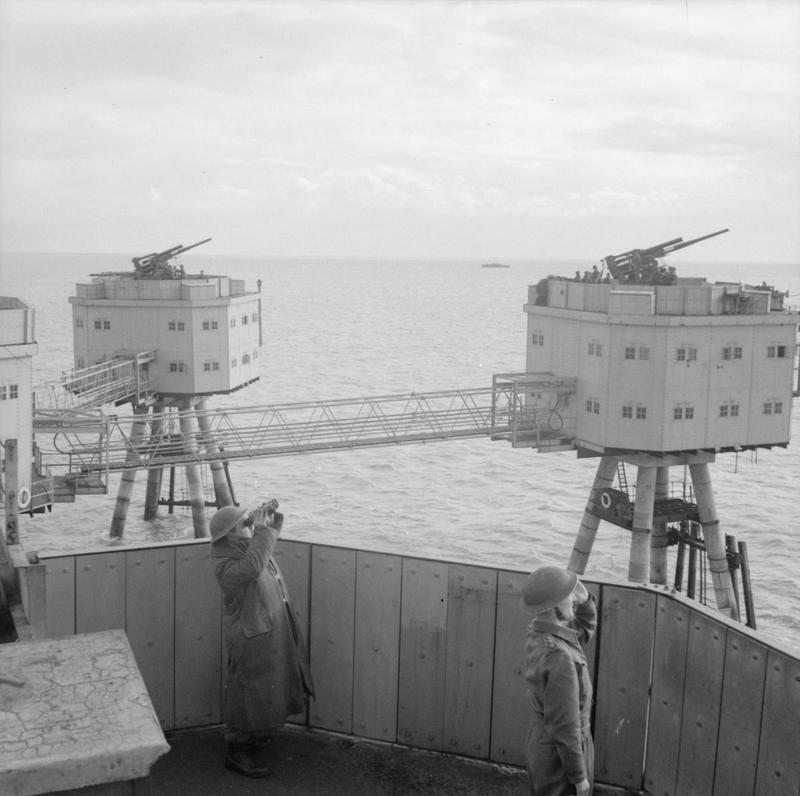 The only photo of the construction of the towers I could find was of the Mersey forts, however the Thames Estuary forts from Northfleet on the Thames would have been constructed in the same manner, ready to be floated out to sea © IWM (A 13259): 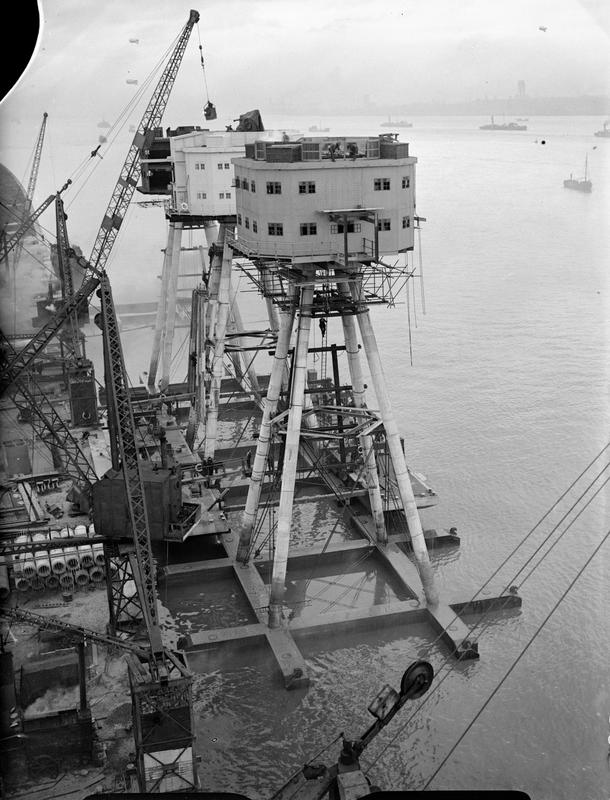 A final view of the Red Sands fort, wind farm and a ship approaching the Thames heading for its berth further upstream. 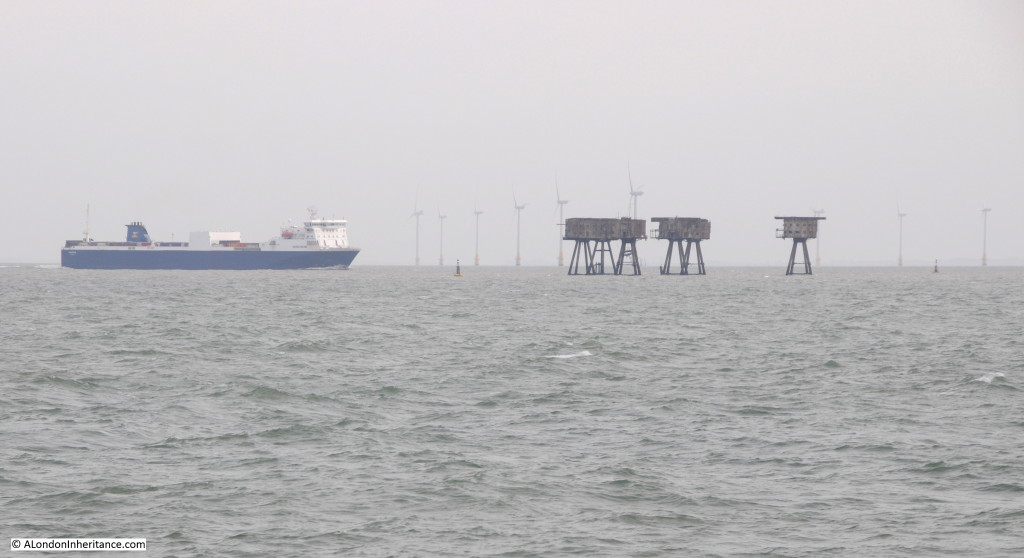 The water that has flowed through London and down the Thames has now merged with the sea. Even at this distance, connections with London can still be found through the Maunsell Forts, built specifically to defend the city from attack during the last war.

The Thames is a fascinating river with a long history, intimately connected with London.

Now it is time to turn round and head back to London. For my final post on the Thames it will be a dramatic after dark return to the centre of the city.