During the afternoon of Saturday 23rd August 1947, my father took a boat trip along the Thames from Westminster to Greenwich. I am able to date this accurately as the date was written on a number of the photos taken along the route that he printed afterwards.

My father’s photos were taken from a boat at low tide, so I was not able to get the view exactly right, however they do show roughly the same view and the changes that have occurred along the north bank of the river.

I have not processed these photos, they are straight from the scanner and some show some imperfections. I prefer the unprocessed look as a more genuine presentation of photos that are now 69 years old. Film was hard to get just two years after the war had finished and these photos were taken on 35mm movie film which was cut up to fit the film holder in the camera. I have no idea why movie film was available, or where it came from.

After taking the photos for last week’s post about Tower Bridge, I continued along the south bank of the river towards Westminster, so these photos are in reverse order.

Starting the journey in 1947 with the Tower of London. As with last week’s photos the beach in front of the Tower looks to be busy on an August summer afternoon. 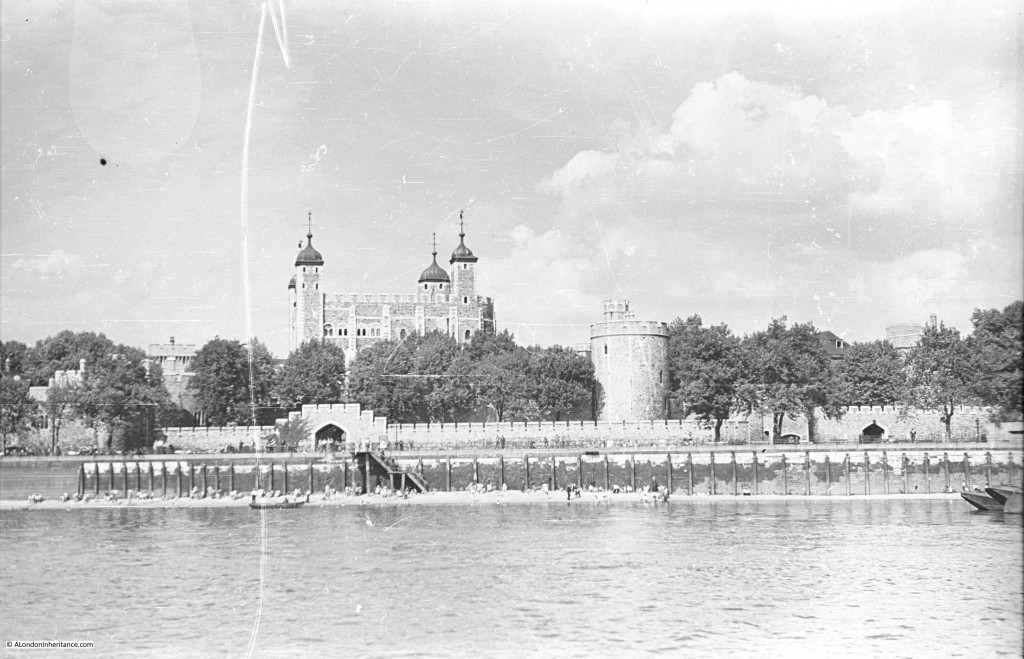 The view today from the opposite bank of the river. There are few high buildings immediately behind the Tower to detract from the view, however I doubt that this will remain the same for long, the number of cranes in the background are rather threatening. 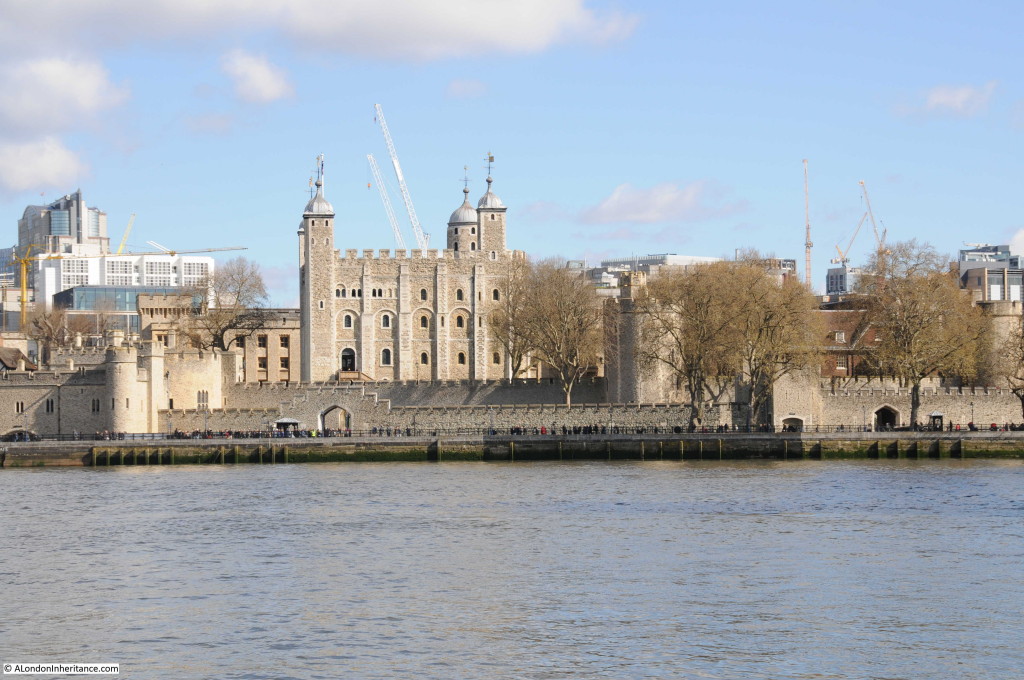 Just past the Tower is this view. The Tower of London is at the right of the photo (just behind the trees) and the large building in the centre is the former Port of London Authority building.

The area on the left of the photo, down to the river was bombed heavily during the war. To the left of the photo is the shell of a church tower. This is the church of All Hallows by the Tower. Below the PLA building and facing the river is the side of a building. This is the Ye Old Tiger Tavern on Tower Hill which survived bombing but was later pulled down in the reconstruction of the area. More on these buildings and the area in later posts. 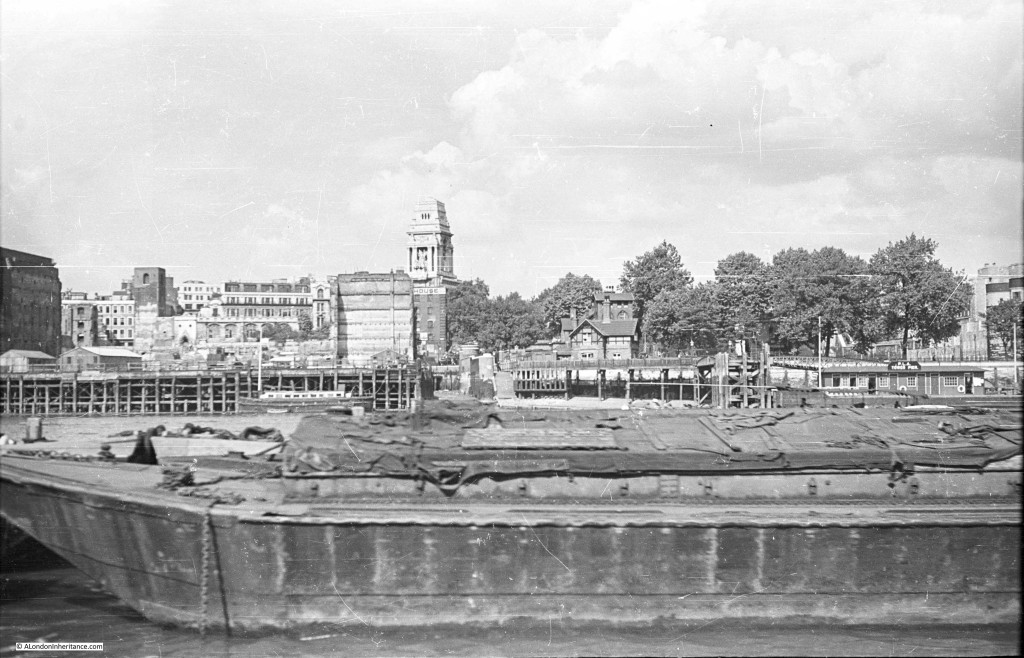 The view today. I should have been a bit further to the left, however the Belfast would have obstructed much of the view. The tower of the PLA building is still visible, however the new buildings on the left have obscured the view of All Hallows by the Tower which was rebuilt after the war. 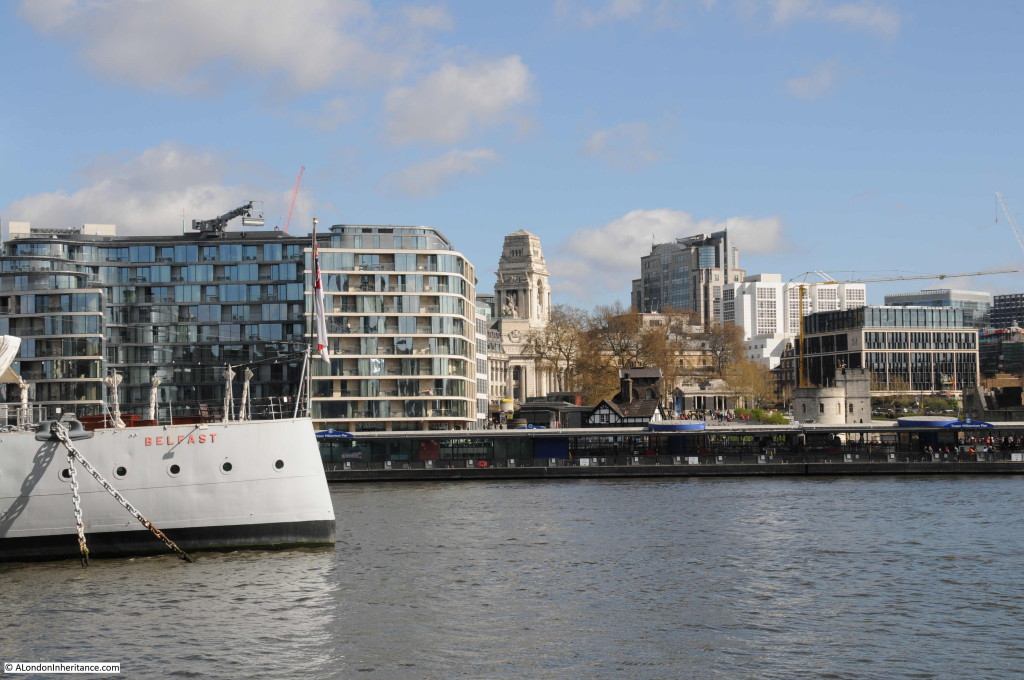 Further along we come to Billingsgate Market, with the Customs House on the right and the tower of the church of St. Dunstan in the East just behind the Custom House. 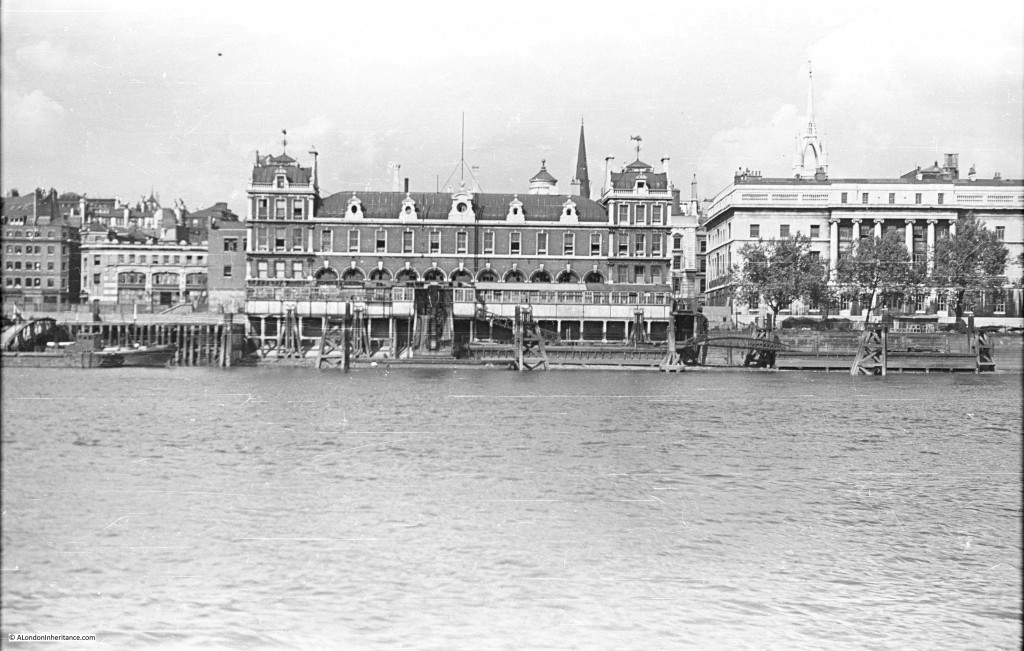 And the view today (although partially obscured by one of the new piers along the Thames). Billingsgate, the Custom House and the tower of St. Dunstan’s are the only buildings that remain from 1947 with the towers of the City rising up behind. 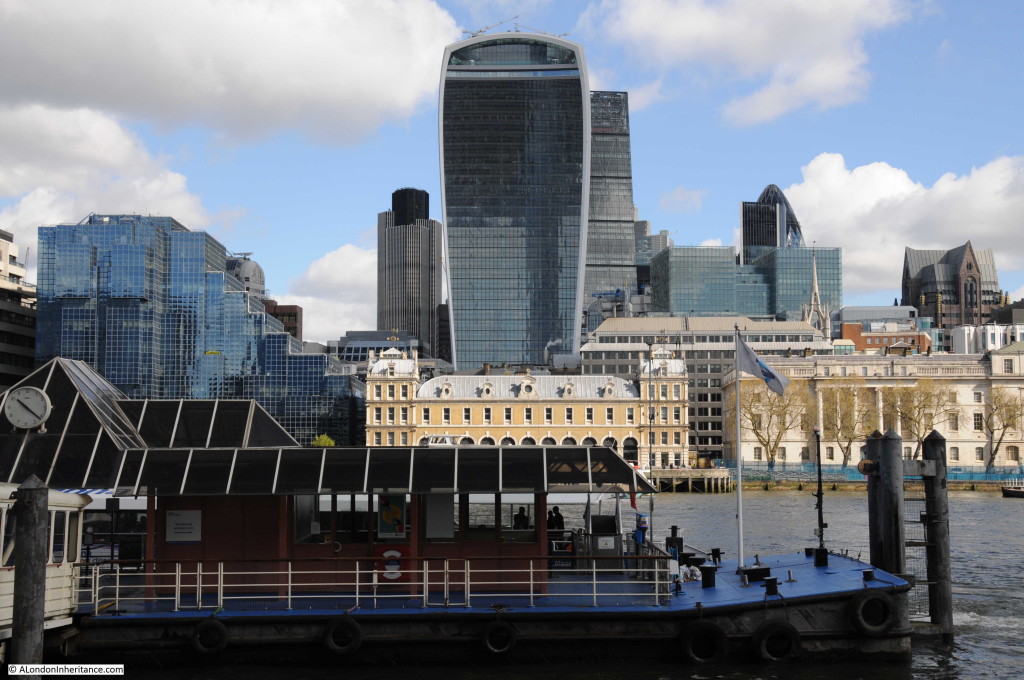 The following photo shows the edge of the Billingsgate Market building on the extreme right of the photo. There is then a gap which before the war was occupied by Nicholson’s Wharf, destroyed by bombing along with a direct hit by a V1 flying bomb. To the left of the gap is New Fresh Wharf. This was a busy wharf that handled very large volumes of goods, general goods, fruit and canned goods as well as operating as a terminal for passenger ferries. 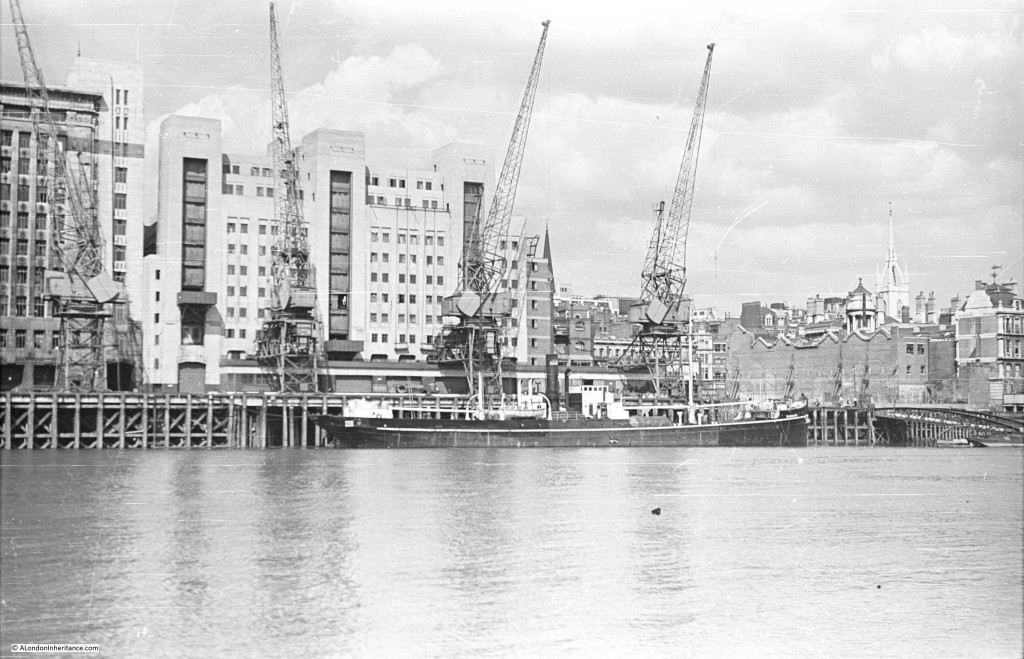 The same view today with Billingsgate on the right of the photo and Adelaide House of the left. The scene in-between these two buildings is now completely different. 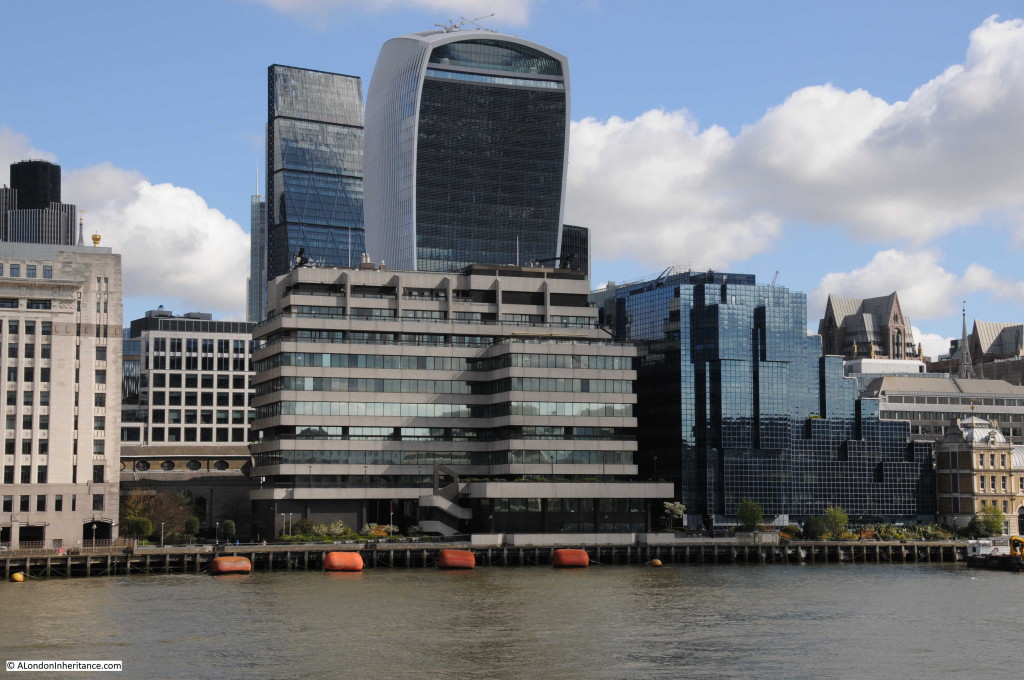 We have now moved further along the river, past London Bridge, the version of the bridge prior to the current one can be seen in the following photo with Adelaide House and New Fresh Wharf behind the bridge. We can now see the Monument and to the left of the bridge is Fishmongers Hall, the home of the Fishmongers’ Company. Damaged caused by bombing can be seen to the left. 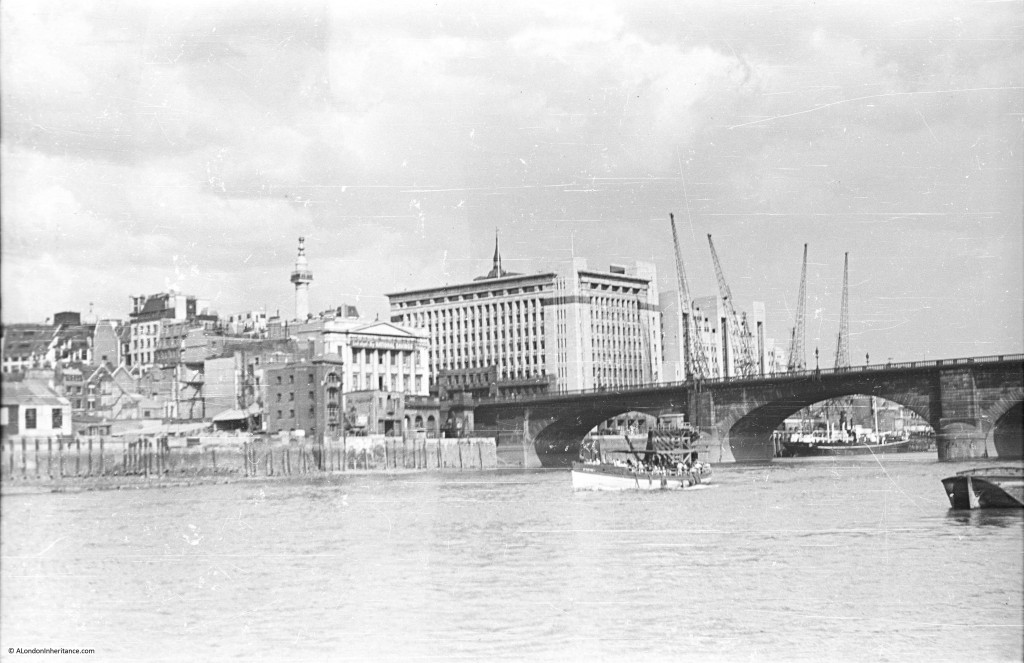 Almost the same view today, although I should have been on a boat, mid river as my father was to get the same perspective. Adelaide House, the Monument and Fishmongers Hall are still there. My father’s photo included the 19th Century version of London Bridge and my photo shows the 1974 incarnation of the bridge that has crossed the river in roughly the same location for many hundreds of years. 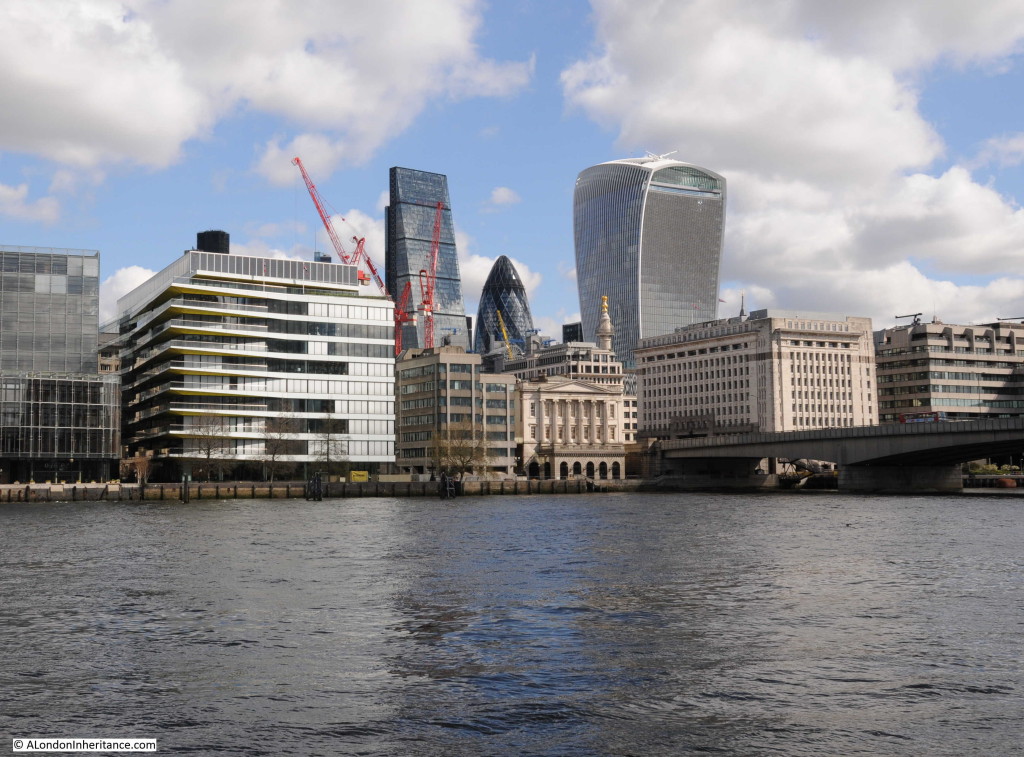 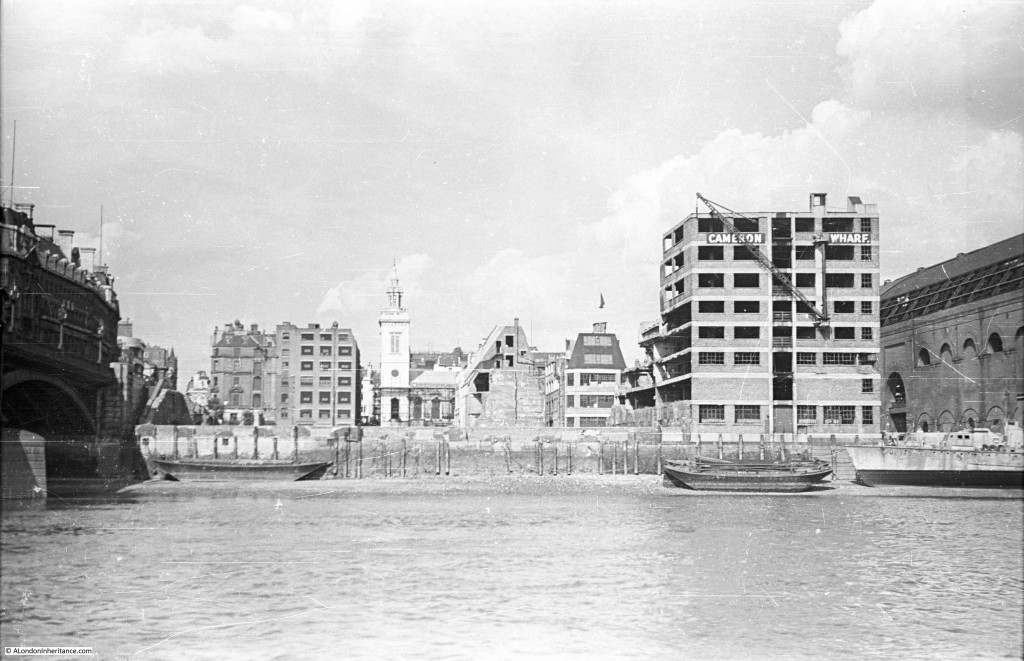 The view today. Cannon Street Station still on the right, although without the original roof, offices have now been built above the station platforms. The old Cameron Wharf area is now the City of London Corporation Waste Transfer Station with barges mooring along side to take rubbish from the City to processing locations further down river. 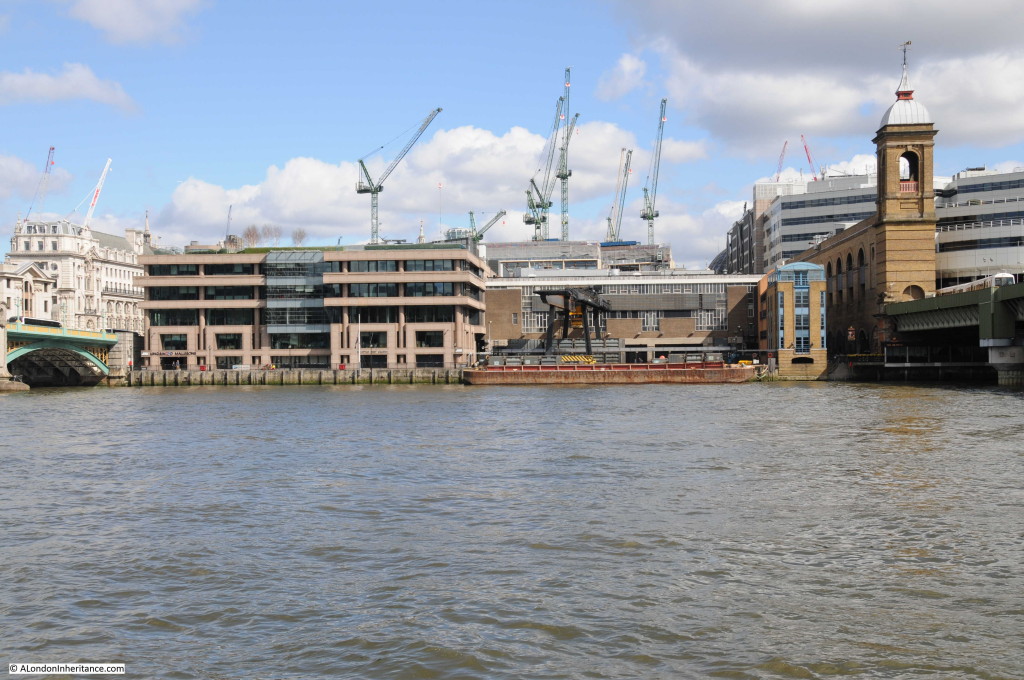 Now walk under the new Millennium Bridge and slightly further up river you would have had this view in 1947. Puddle Dock is on the extreme left. St. Paul’s Cathedral is in the centre, partially obscured by the Faraday Building in Queen Victoria Street, one of the main London telephone exchanges. The height of the Faraday Building and the impact on views of St. Paul’s was one of the reasons for the planning regulations that now protect specific sight-lines and views of the cathedral.

The building and wharf of Blundell Spence & Co Ltd (manufacturers of Paints, Varnishes and Colours) is just below the Faraday Building, with the Cannon Warehouse and Showrooms to the right. 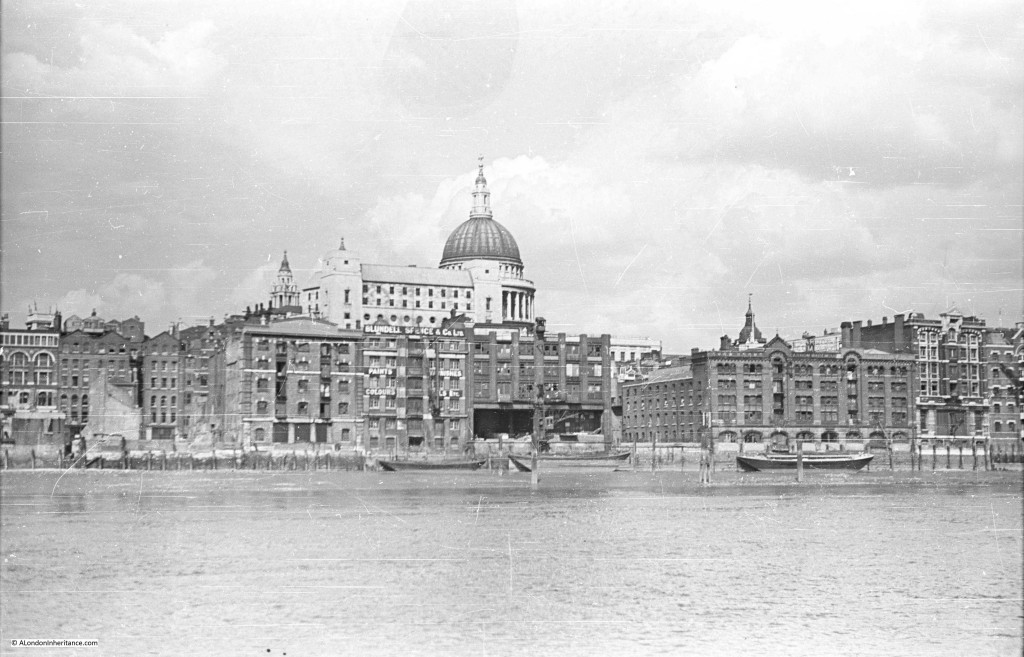 The view today. The Faraday Building is still the highest building between the cathedral and the river. The church on the right of centre in the 2016 photo is St. Benets Welsh Metropolitan Church. If you look in exactly the same position in the 1947 photo the spire above the tower of the church can be seen. The building on the right hand edge of the photo is the new site of the City of London School. 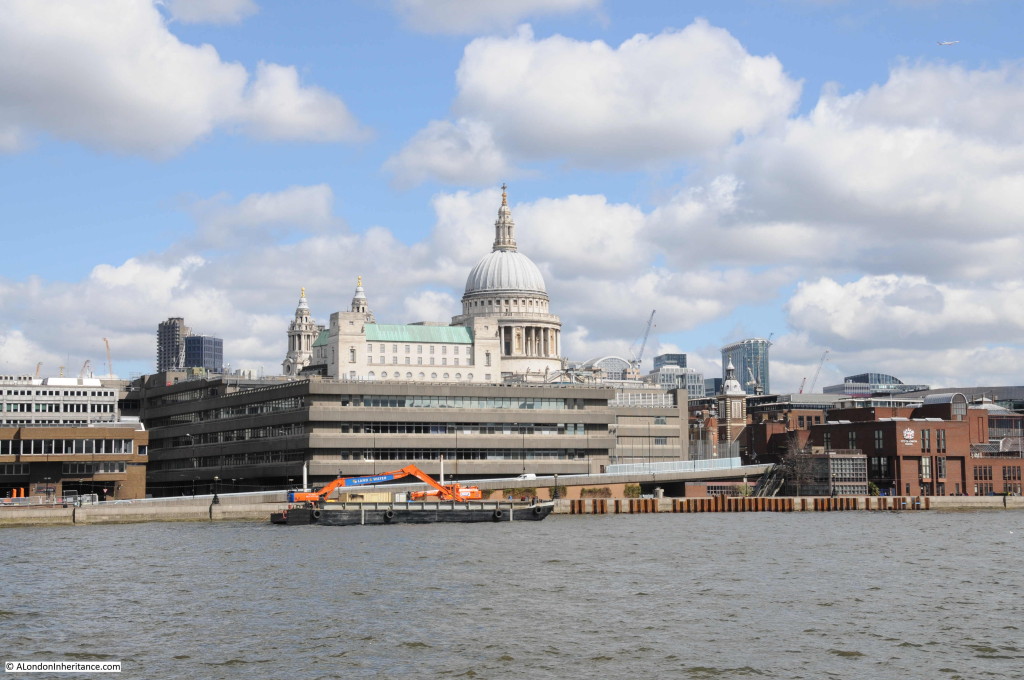 Now passing under Blackfriars Bridge, walk along a bit further and look back at St. Paul’s Cathedral. In this 1947 view, on the left is the City of London School with the Unilever Building just behind. 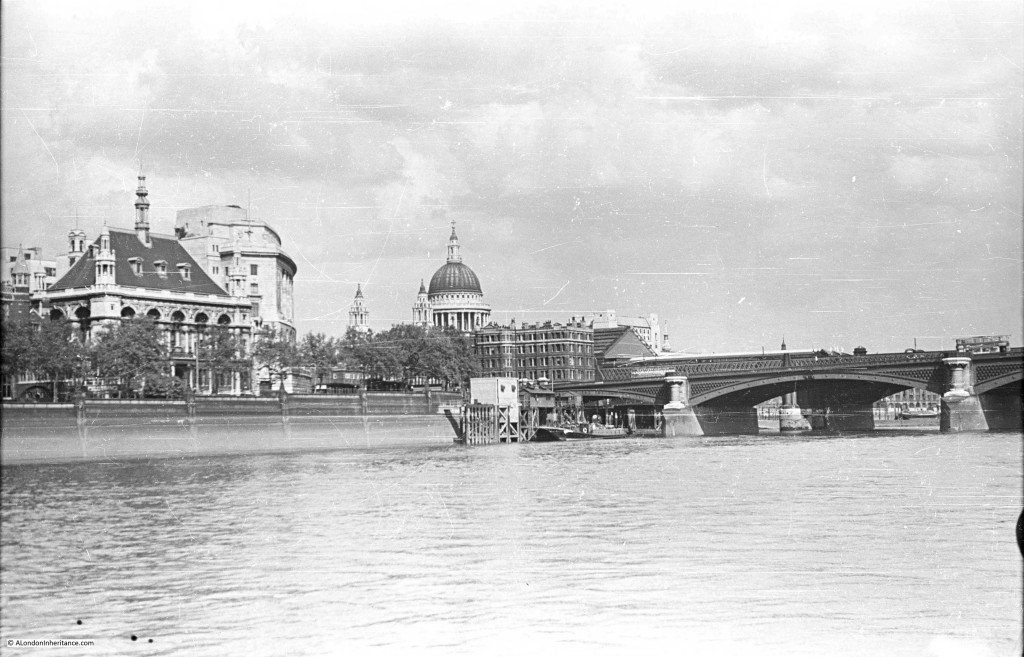 The same view today. The original building of the City of London School is still there, although the school moved out in 1987 to new buildings along Queen Victoria Street. 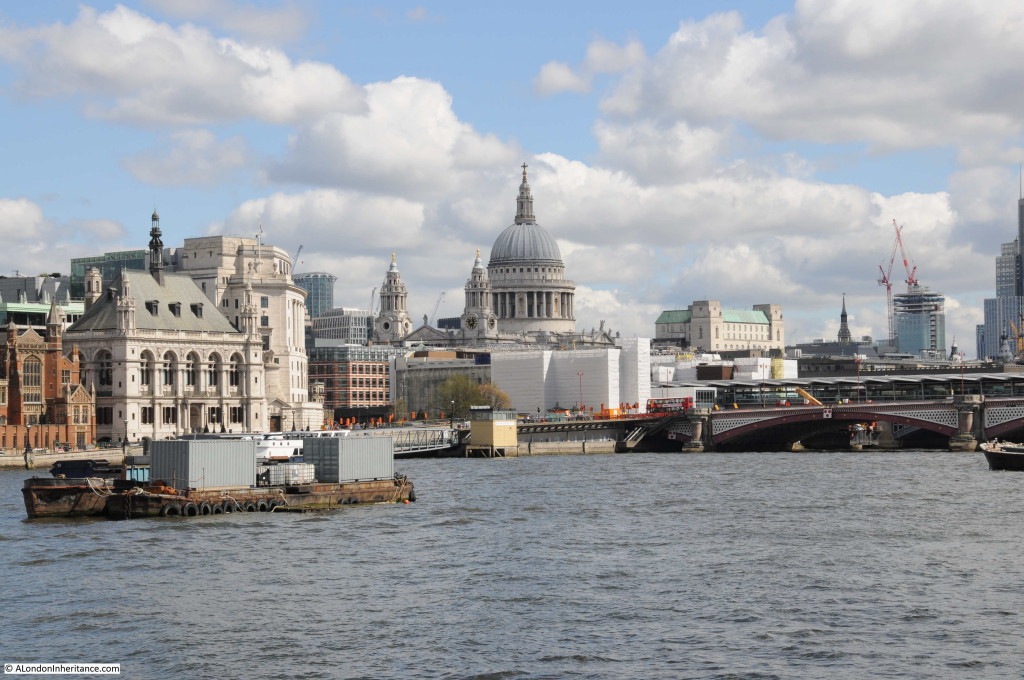 Walk further along the south bank, almost to Waterloo Bridge and look back along the north bank of the river and this is the 1947 scene. The steeple of St. Brides church is on the extreme right. Also on the right of the photo on the embankment wall is the memorial commemorating the naming of this stretch of the river as King’s Reach after King George V.

The ship in the middle of the photo is the Discovery, Robert Falcon Scott’s original ship. She was moored here from 1931 to 1979. Having been fully restored, the Discovery is now moored in Dundee. During the war she was used by the Sea Scouts, of which my father was a member. His written account of life in London during this time includes accounts of staying on the Discovery and sailing up and down the Thames between Pimlico and Tower Bridge on an old whaler doing things that would be a nightmare for current health and safety. 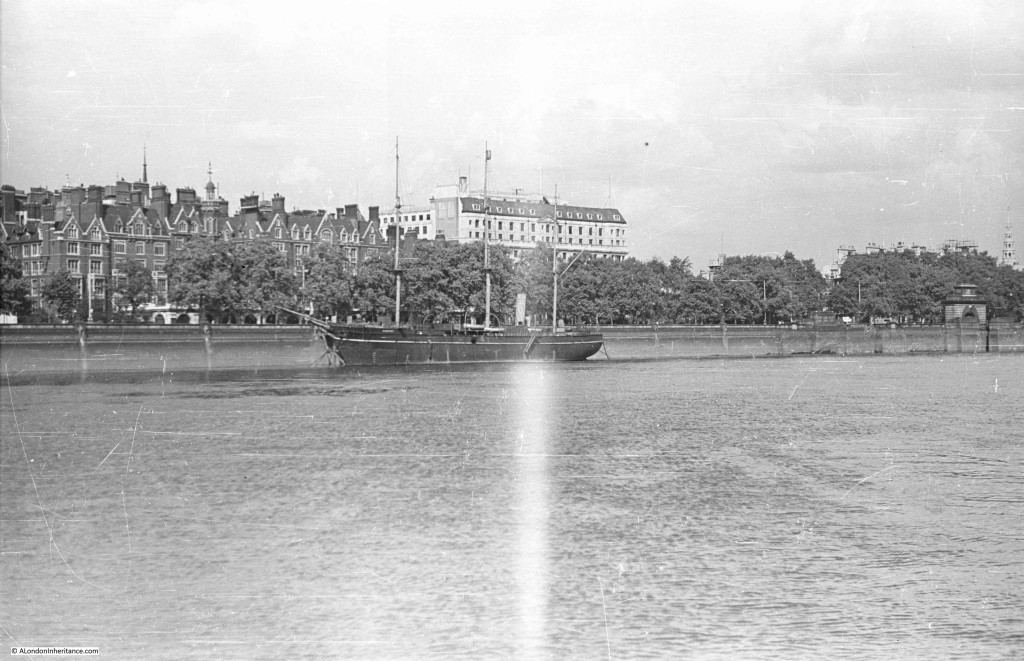 The location of the Discovery is roughly at the position of the blue containers. 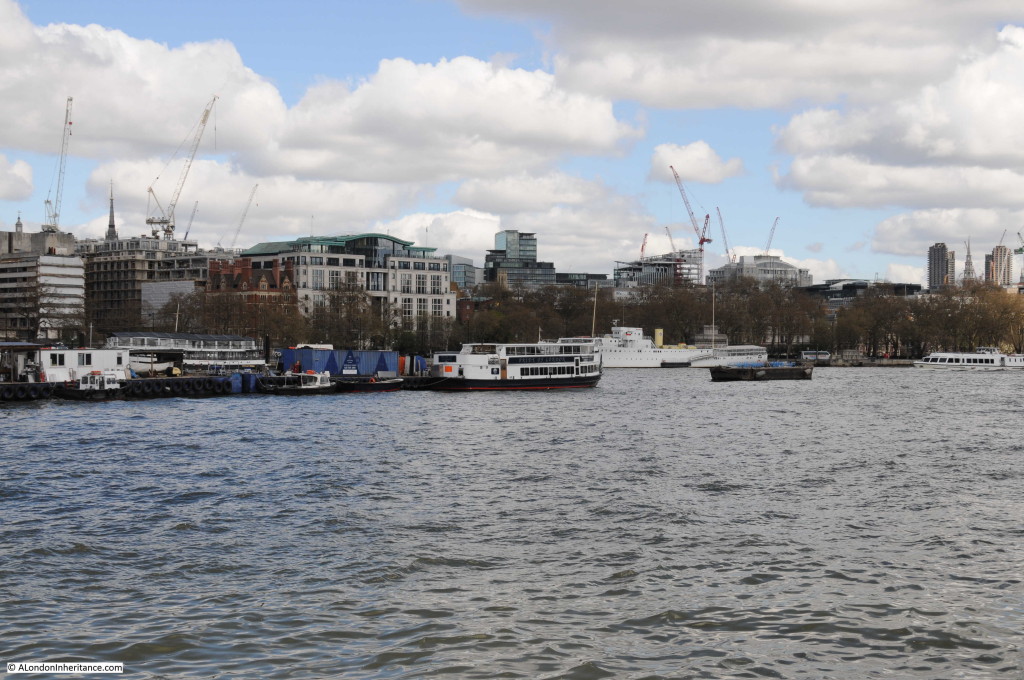 Much has changed along the Thames in the 69 years since my father took these photos, although some views are almost exactly the same. The following photo was taken close to Hungerford Railway Bridge. Cleopatra’s Needle is in the centre with the Shell-Mex building behind (the building with the clock). the Shell-Mex building was completed in 1931 and occupied by Shell Mex and BP Ltd. Although Shell have long since moved out, the building is Grade II listed so should be preserved as a major Thames landmark and an example of 1920s / 1930s architecture long into the future. 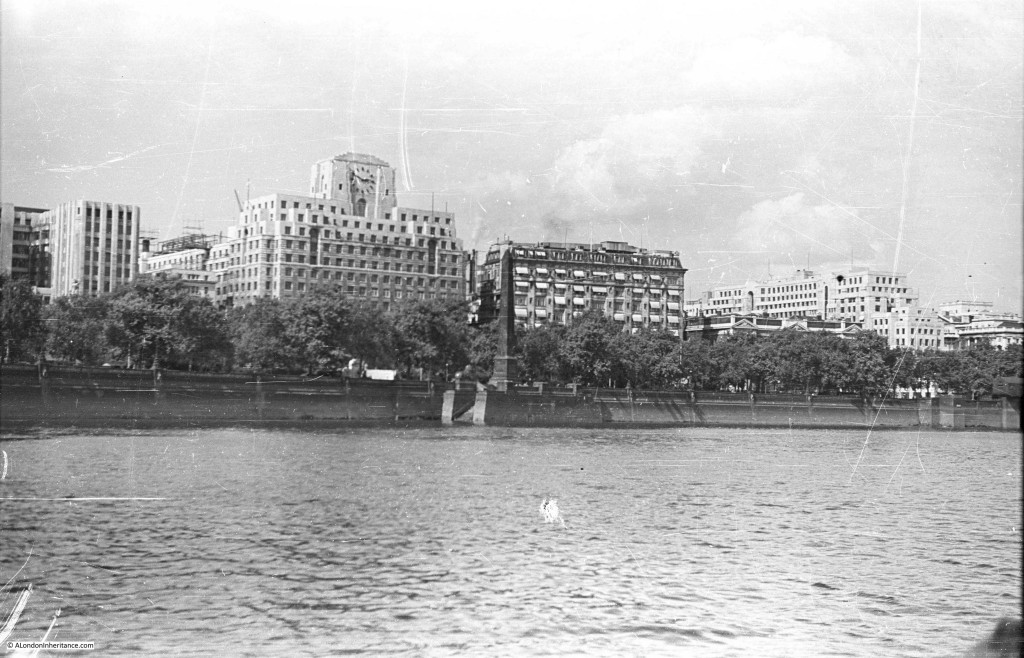 The same view today is almost unchanged, with the Adelphi on the left, then Shell-Mex House, the Savoy, then lower down, behind the trees the Institute of Electrical Engineers building, then Brettenham House and finally Somerset House on the extreme right of the photo.

I had intended to take this photo at the same time (2:50pm) as my father although due to taking too many photos along the walk I arrived slightly later at 3pm. 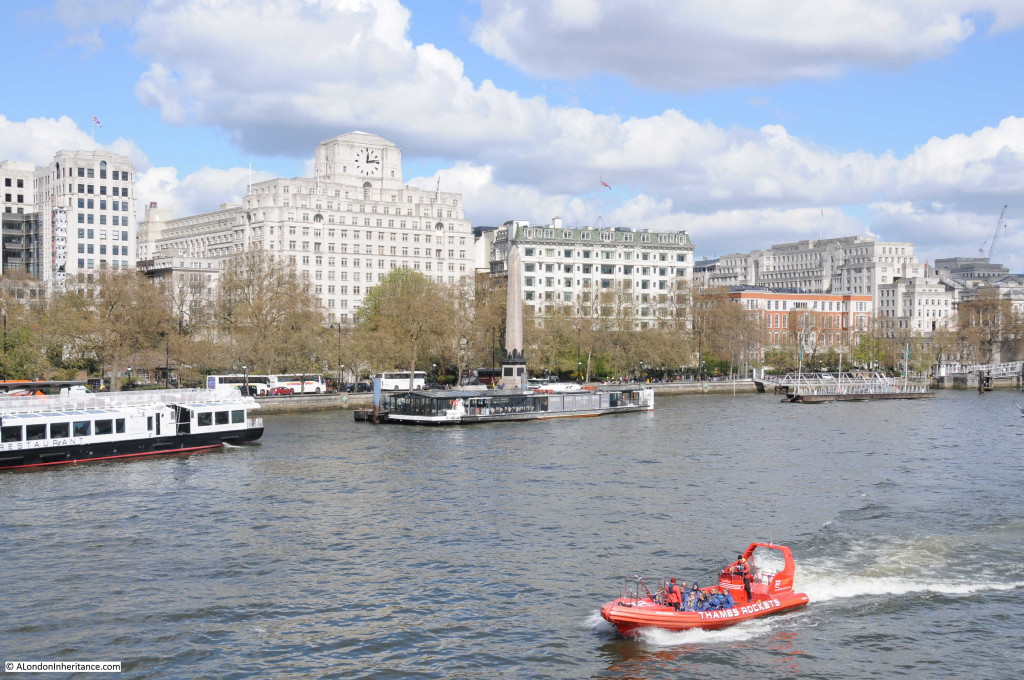 The final stop as we approach Westminster Bridge is the view across to the RAF memorial. The stone column was designed by Reginald Blomfield and the eagle on top of the memorial by William Reid Dick. The memorial was unveiled in 1923. 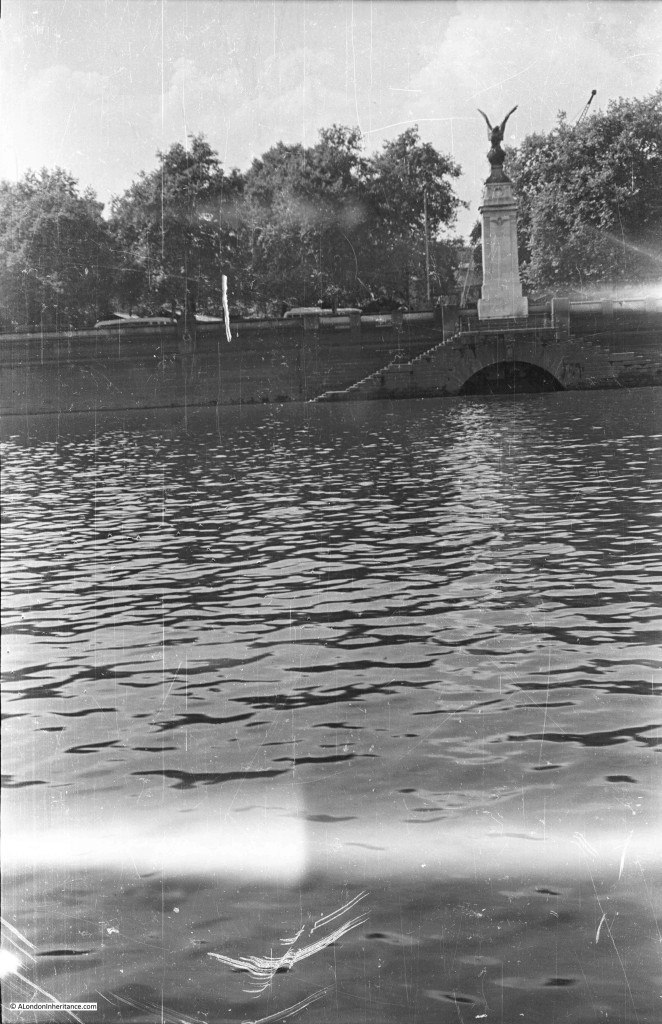 The view to the memorial today. I should have been a bit further to the left, however the infrastructure around the base of the London Eye obscures the view. The significant change is the building behind the memorial. These are the main Ministry of Defence buildings. Construction of these started in 1939, although the war then caused significant delays with construction being completed in 1951. 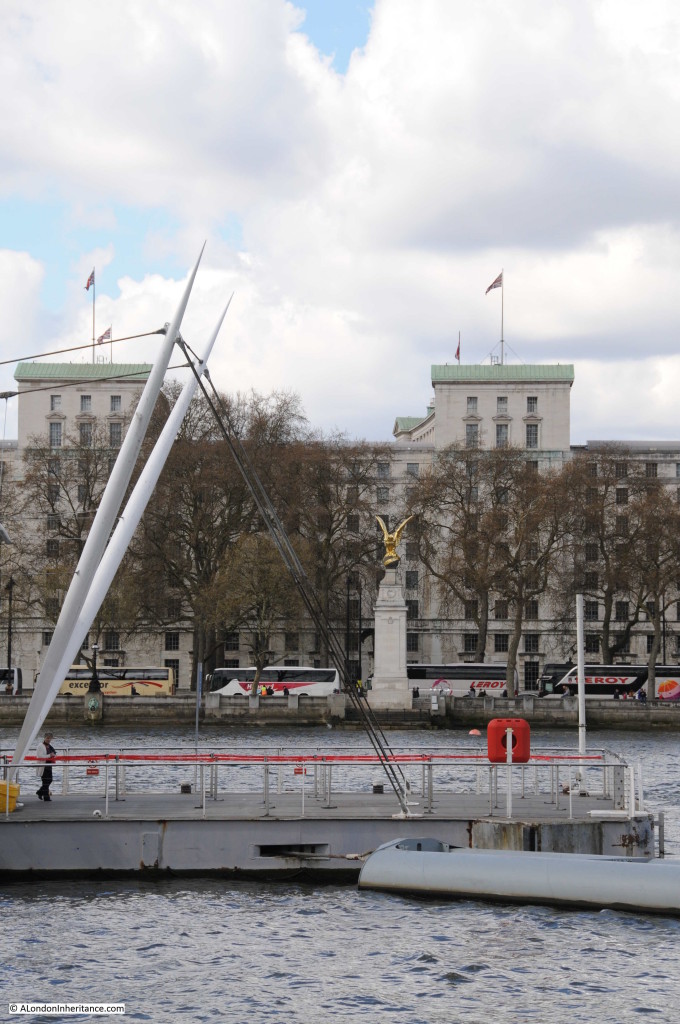 A boat trip or walk along the river is a fantastic way to view the city. Although there has been much development along the north bank over the years, it is surprising that whilst many of the buildings are different, the overall views are much the same. The most significant difference being the towers that now occupy much of the City.

Change along the south bank of the river and in the stretch between Tower Bridge and Greenwich has been much more dramatic and I will be covering these in future posts.