Writing this blog has taught me to be far more observant of my surroundings than I have been in the past. I have no idea how many times I have walked along the Central Line platforms at Bethnal Green underground station, but in all those times I cannot say that the random tiles placed along the platform walls have resulted in a second glance, or the realisation that there is a design purpose behind these tiles.

I was visiting Bethnal Green again a couple of weeks ago and spent some time walking up and down both platforms, looking for the different tiles and taking photos. I have also tried to find the inspiration for the tiles and have been successful in a number of instances, but have yet to trace the origin for all of the tiles.

So, to start on the platform at Bethnal Green: 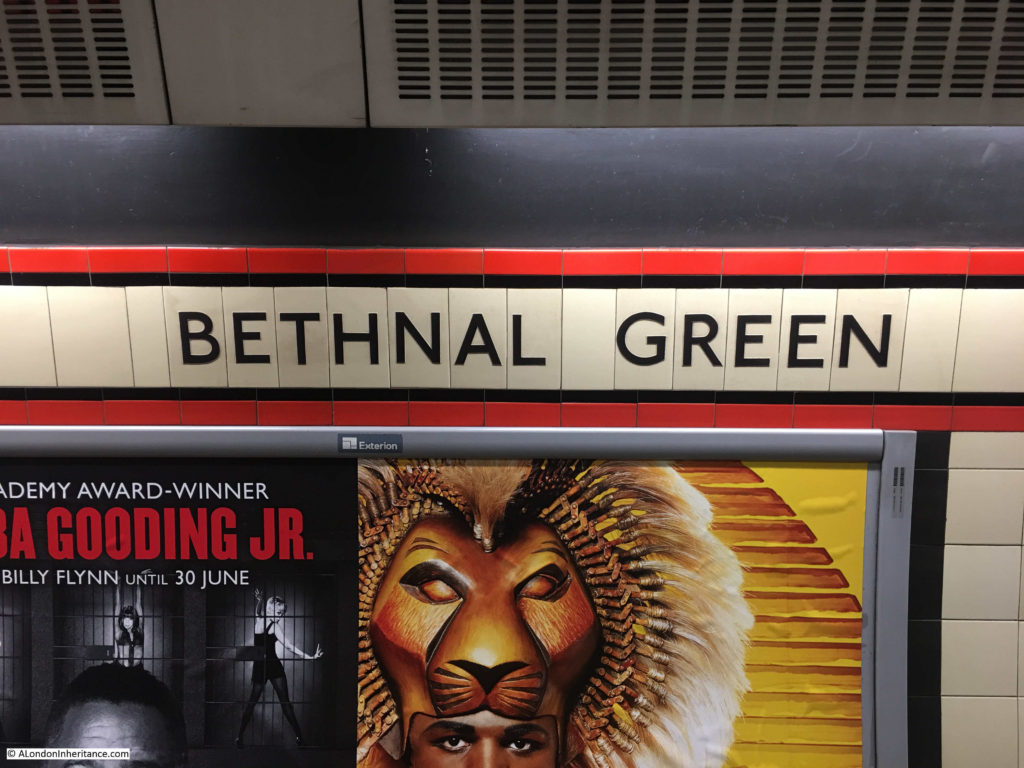 The tiles appear to represent London landmarks and associations with the counties served by the London Underground.

The first tile is a rather good representation of London Underground’s head office at 55 Broadway. 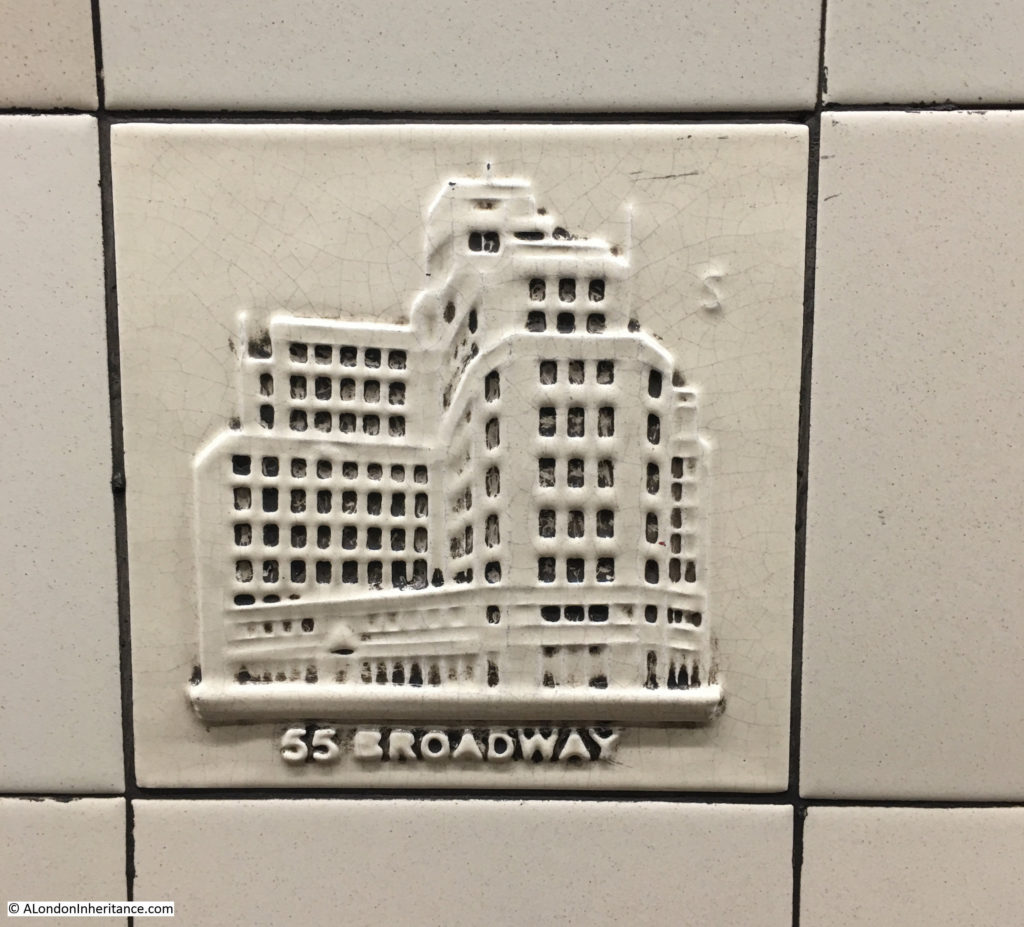 London Transport are in the process of moving out of 55 Broadway, so the tile will provide a historic record for the future of their original head office. My photo from a similar viewpoint when I visited the building shows how accurate the representation is on the tile: 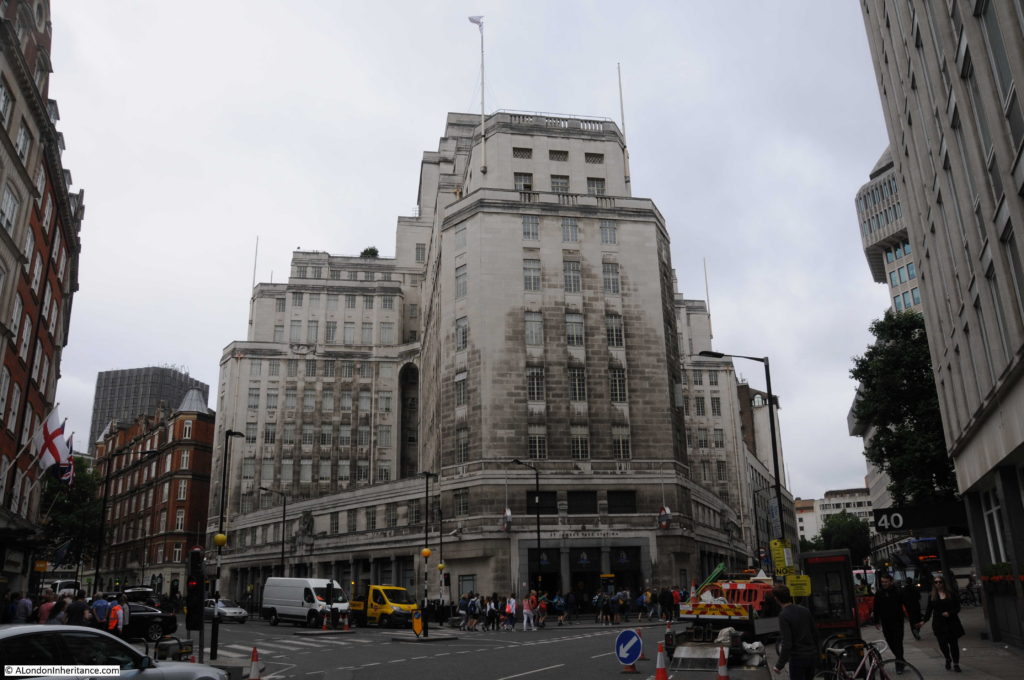 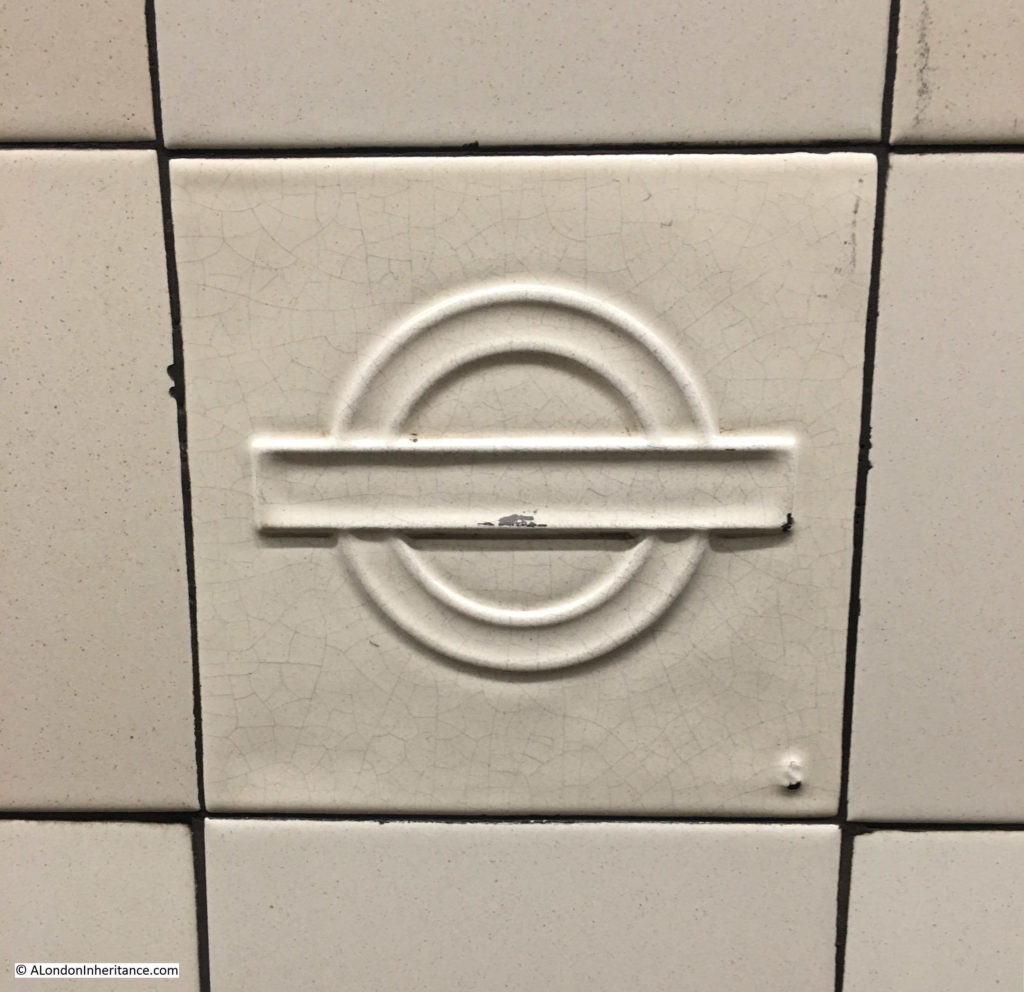 The Bethnal Green name is along the centre of the roundel in the photo below. To demonstrate the random distribution of the decorated tiles and how they blend into the rest of the tiling, look to the left, at the level of the wording for Bethnal Green in the centre of the roundel, past the vertical black stripe and you can just make out a slightly raised tile. This is one of the decorated tiles. 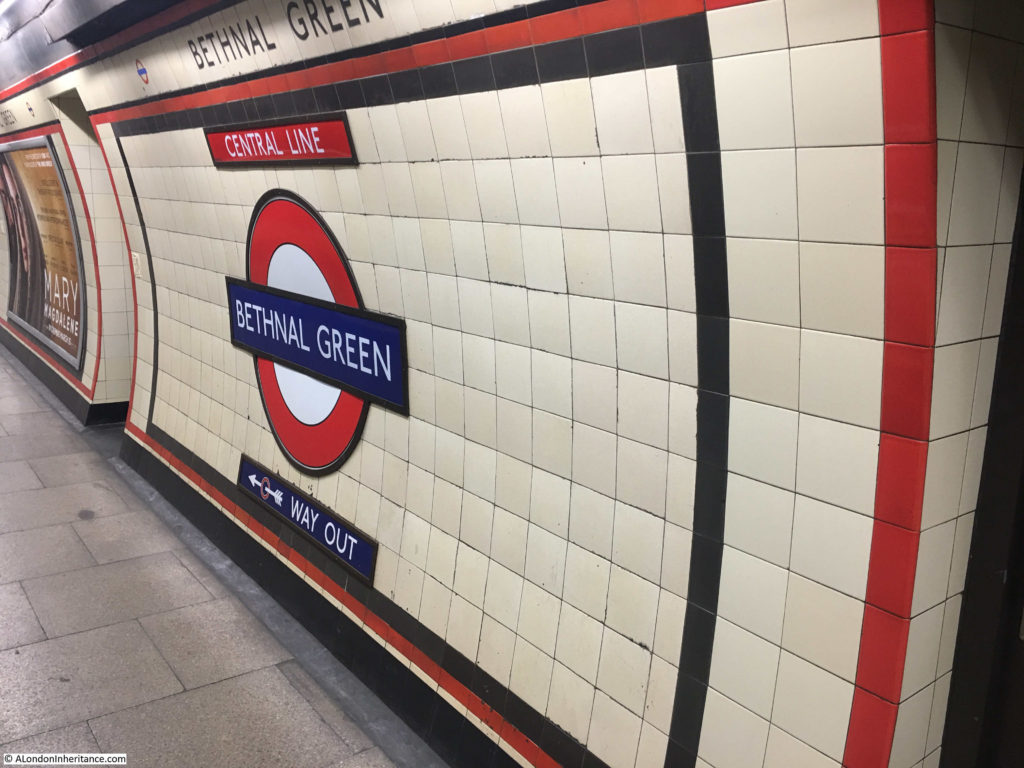 The following tile shows a swan with a crown around the neck. 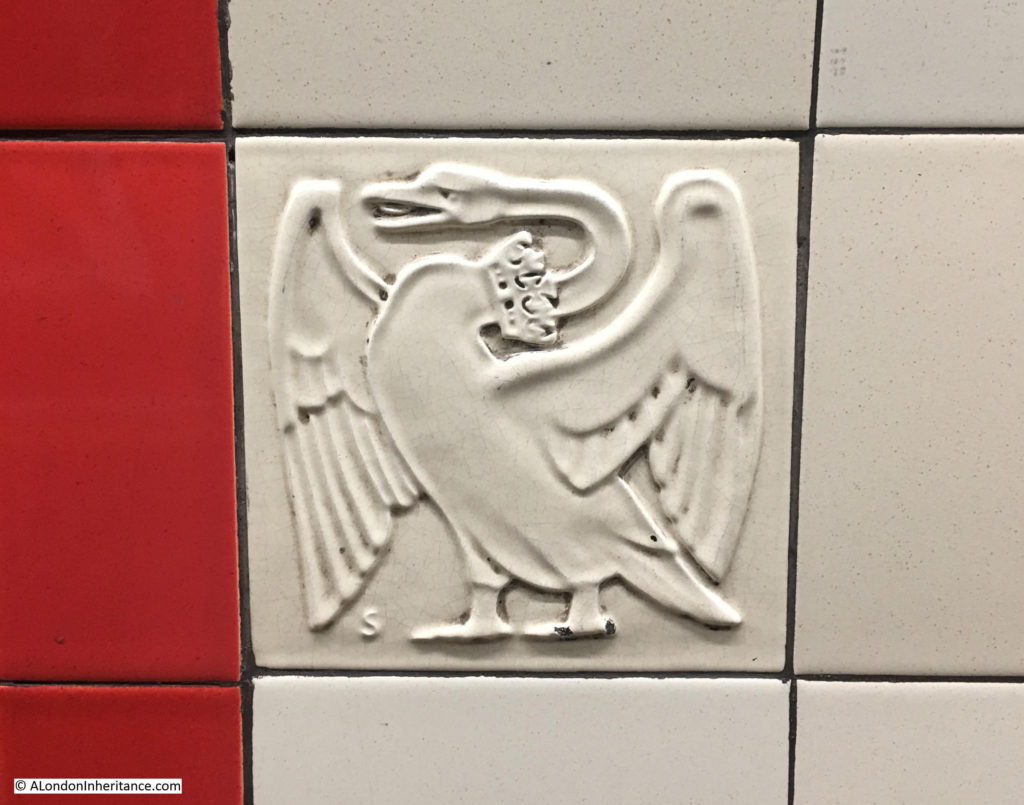 This has been used as a heraldic badge since medieval times. It was used by the 2nd Duke of Buckingham and was adopted by the county of Buckinghamshire, also being incorporated in the coat of arms of the Metropolitan Railway.

In the British Museum Collection there is an example of this symbol in the form of a brooch, made around 1400. Known as the Dunstable Swan Jewel it was found on the site of a Dominican Priory in Dunstable in 1965. Fascinating that these medieval symbols can be found on the tiling of an East London underground station (photo ©Trustees of the British Museum) 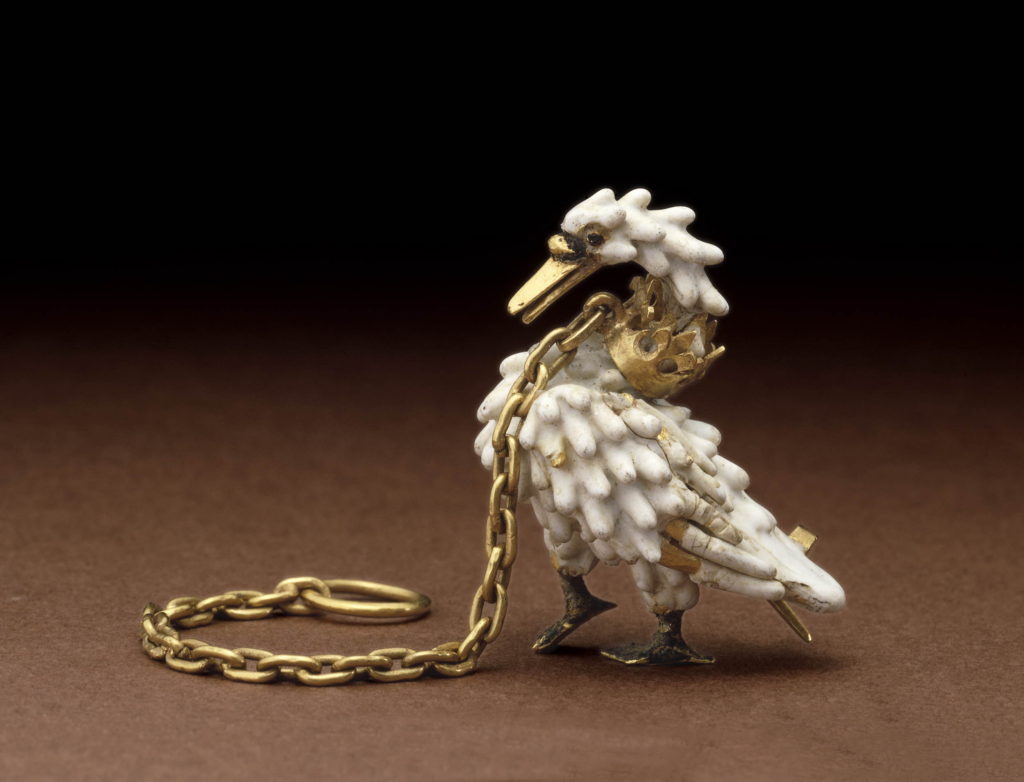 If you look just below the left hand wing of the swan on the tile, there is a letter ‘S’ which is repeated on the majority of the tiles. The ‘S’ is for Harold Stabler who designed the tiles. He was originally asked by Frank Pick, the Managing Director of London Underground and the first Chief Executive of London Transport, to design a rabbit mascot for the country buses run by London General in 1922.

Frank Pick later commissioned Harold Stabler to design the tiles representing the counties around London served by the Underground railway, along with a number of London landmarks, including the following representation of the Palace of Westminster: 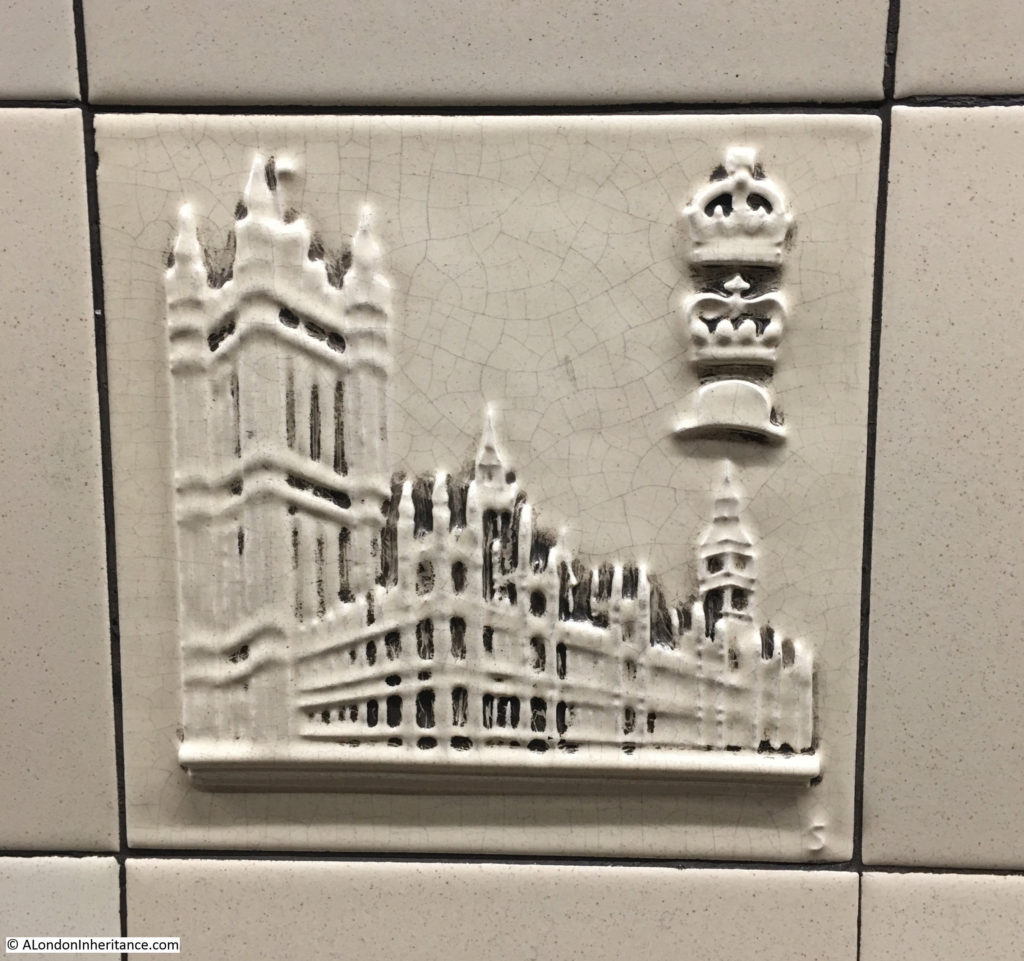 There are two crowns and what looks like a bowler hat – I have no idea what these represent, perhaps Monarch, Lords and MPs?

Harold Stabler was born in 1872. He was a skilled designer and worked in a number of materials including gold and silver and one of his commissions was the Ascot Gold Cup.

in 1936 he was appointed by the Royal Society of Arts as the first Designer for Industry, and he provided consultancy work on design to a number of industries and public bodies. He was involved in the creation of a pottery in Poole and it was this business which would create the tiles for the underground using Stabler’s designs.

He completed the tile designs in the 1930s, however Bethnal Green station did not open until 1946 as works for the Central Line extension had been delayed by the war.

The following tile shows what I assume to be five kings. The horizontal lines have some meaning, but I have not been able to identify the inspiration for this design. 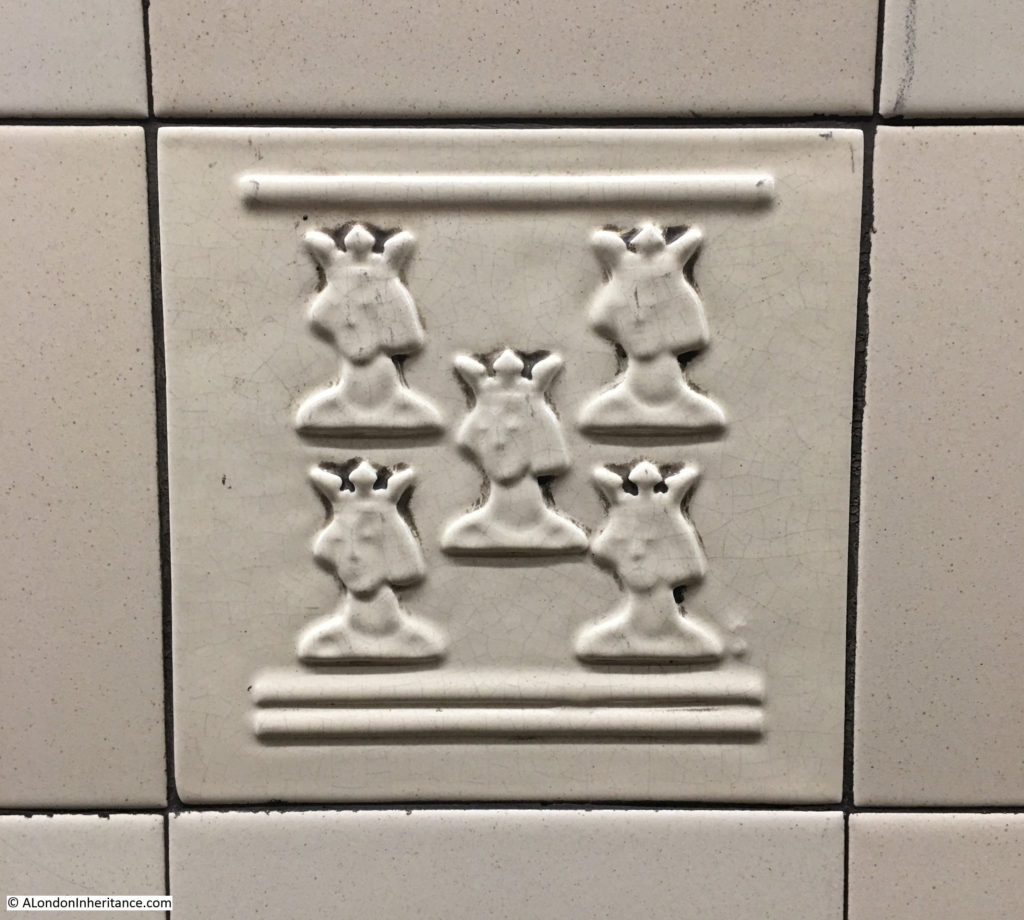 Another tile has five flying birds rather than kings, and they appear to be flying over water. Again, I have not been able to identify the meaning behind this design. 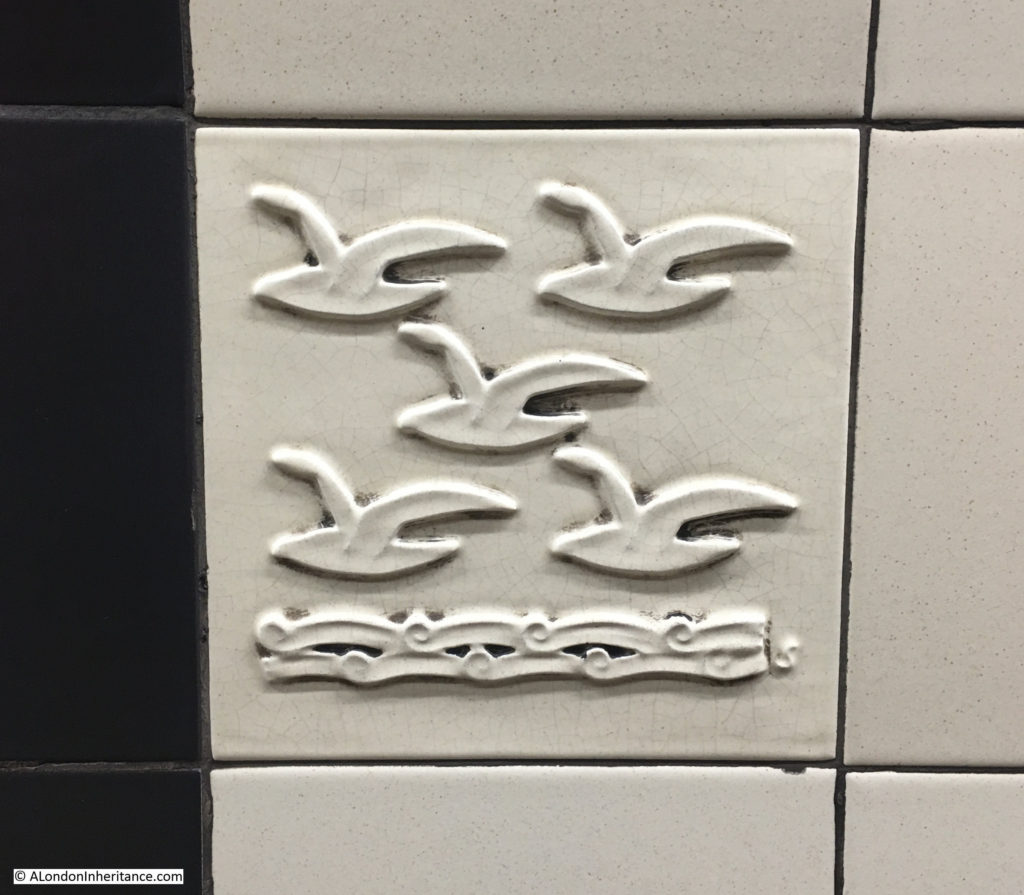 This design is of the Crystal Palace, however this tile does not have the ‘S’ to be found on all the other tiles, so I am not sure if this is one of Stabler’s original designs. 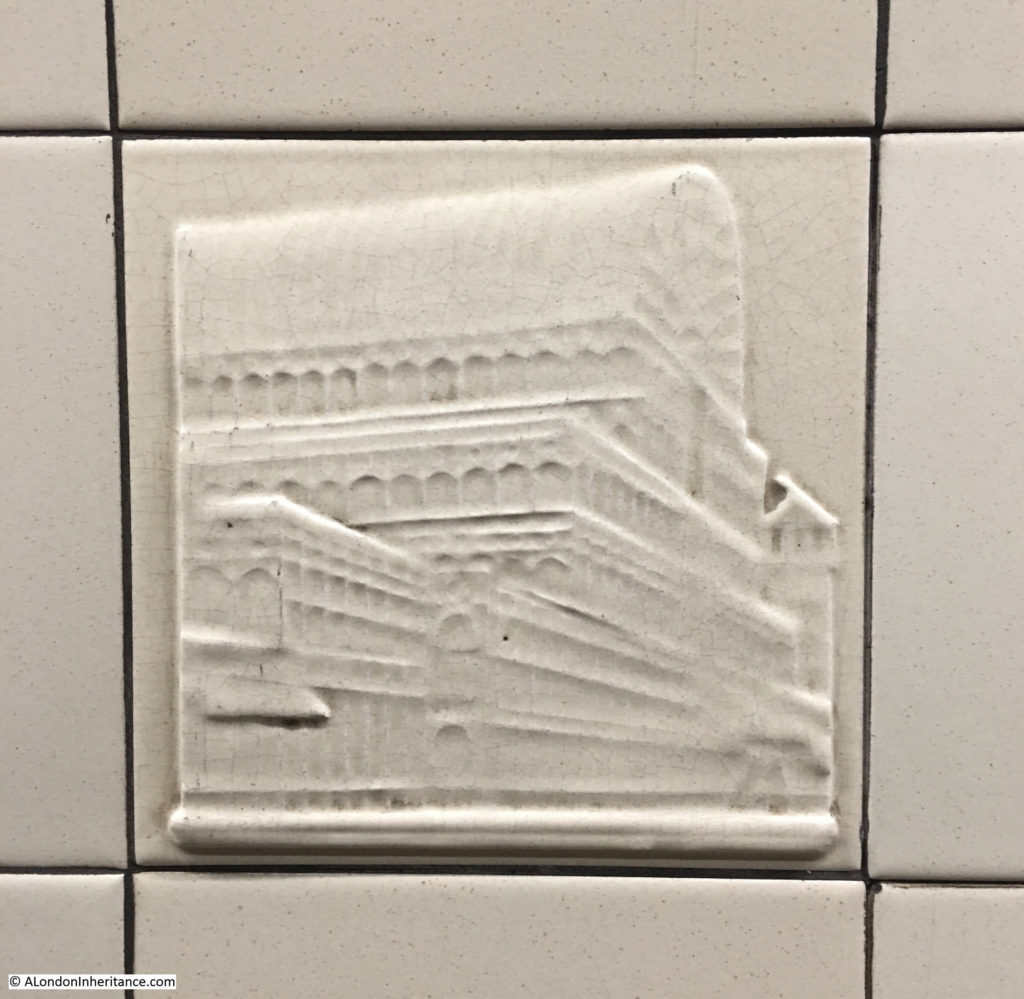 The number five seems a common theme for the tiles. In the following design there are five birds, with two sets of short parallel lines between the top and bottom rows of birds. This tile is one of several held by the Victoria & Albert Museum and their record identifies this design as “five martletts, is the arms of the City of Westminster”. 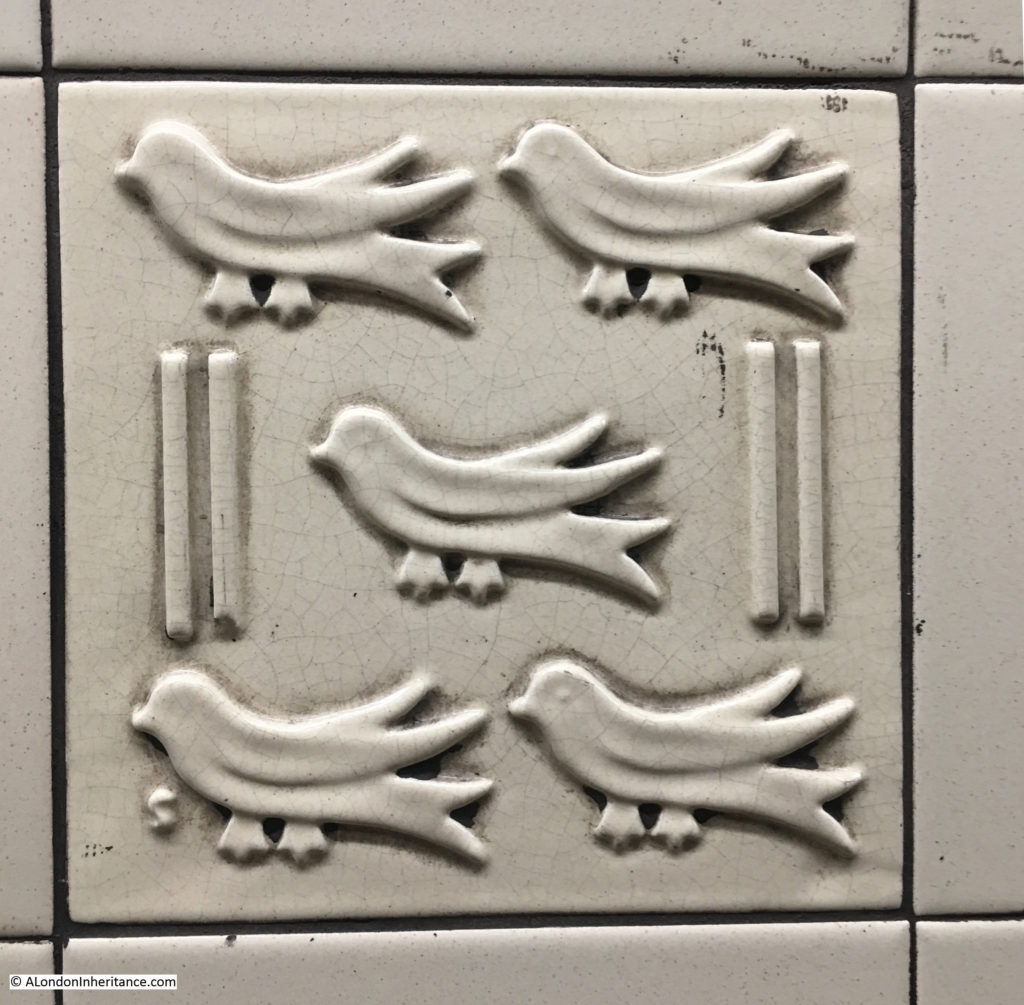 This design was easy to identify: 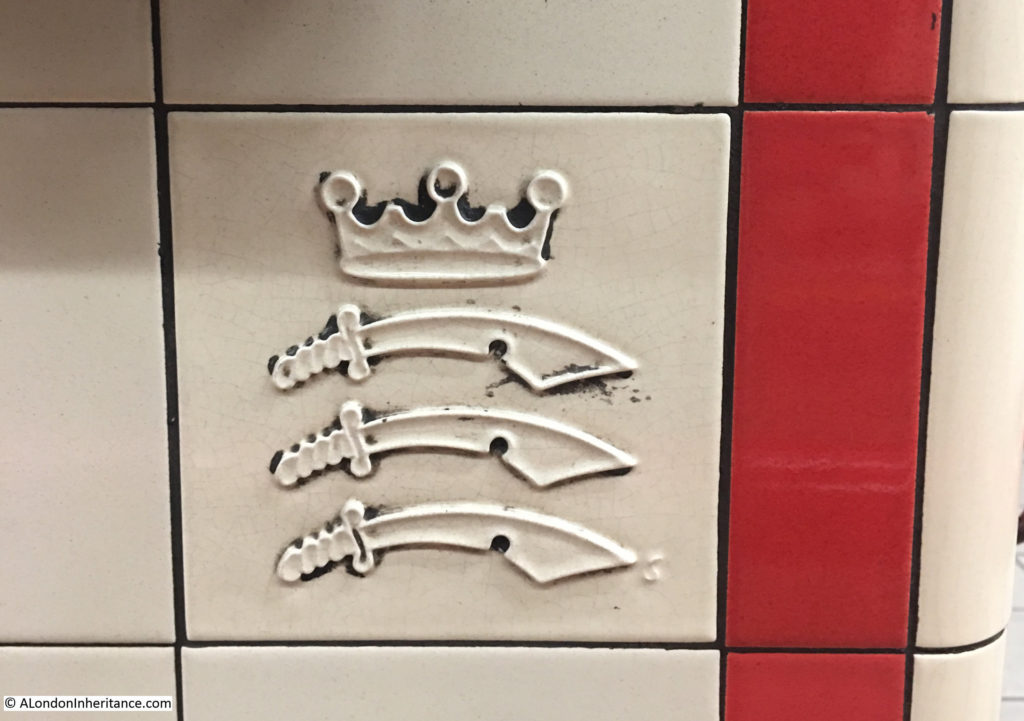 The coat of arms for the county of Middlesex, also as shown below: 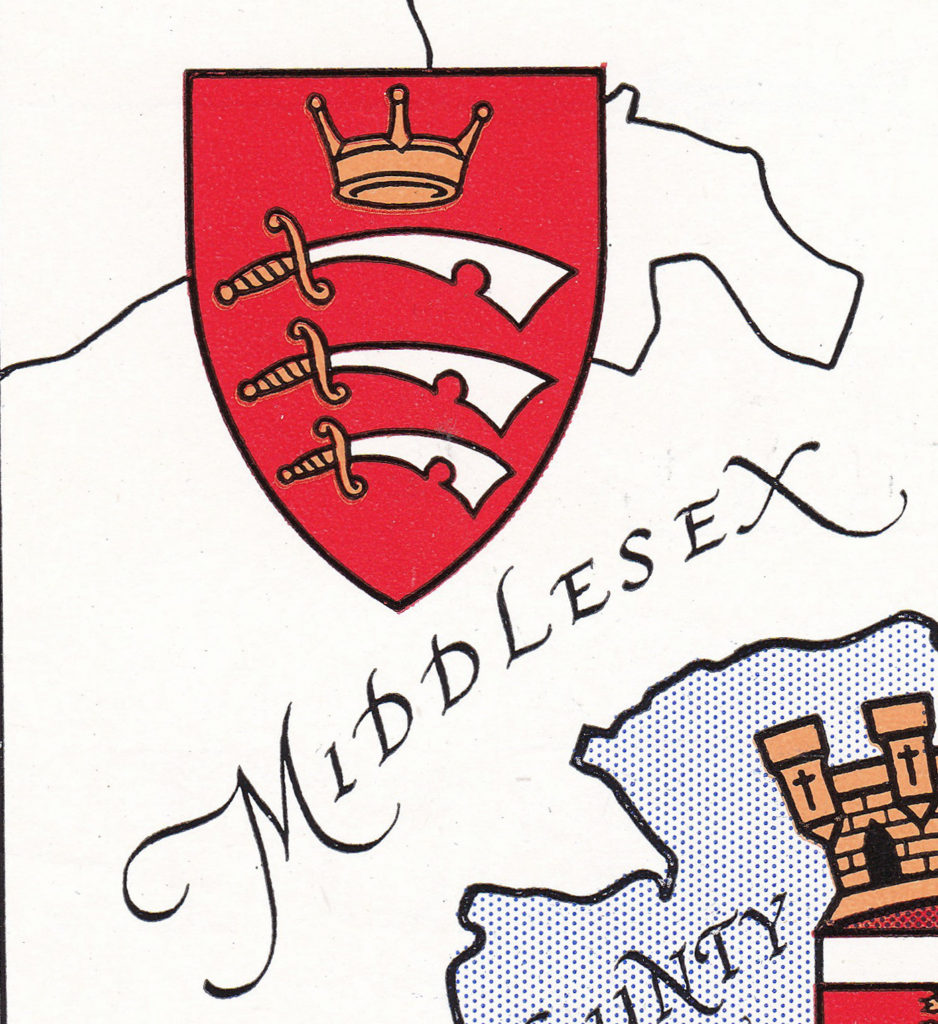 The following design appears to show the representation of a bird, such as an eagle. Another I have not been able to identify. 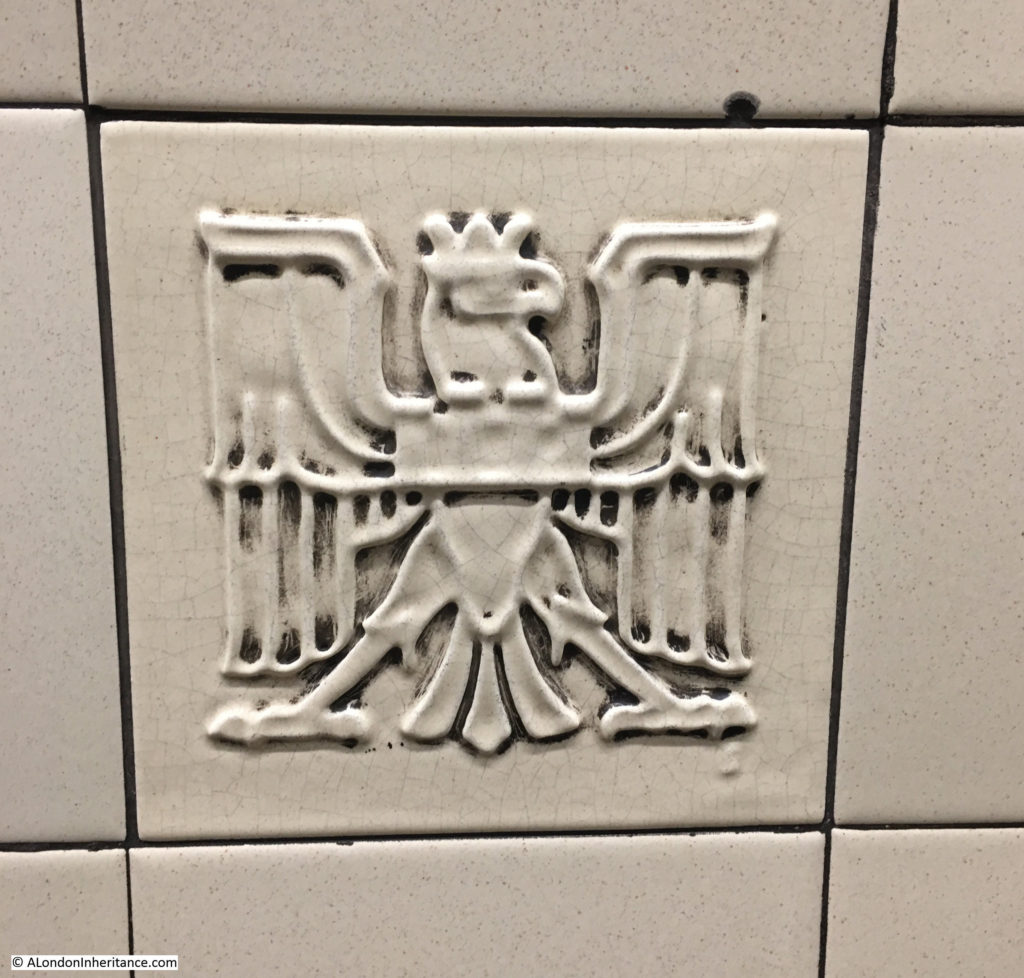 The following design shows a crown above a pair of oak leaves and three acorns: 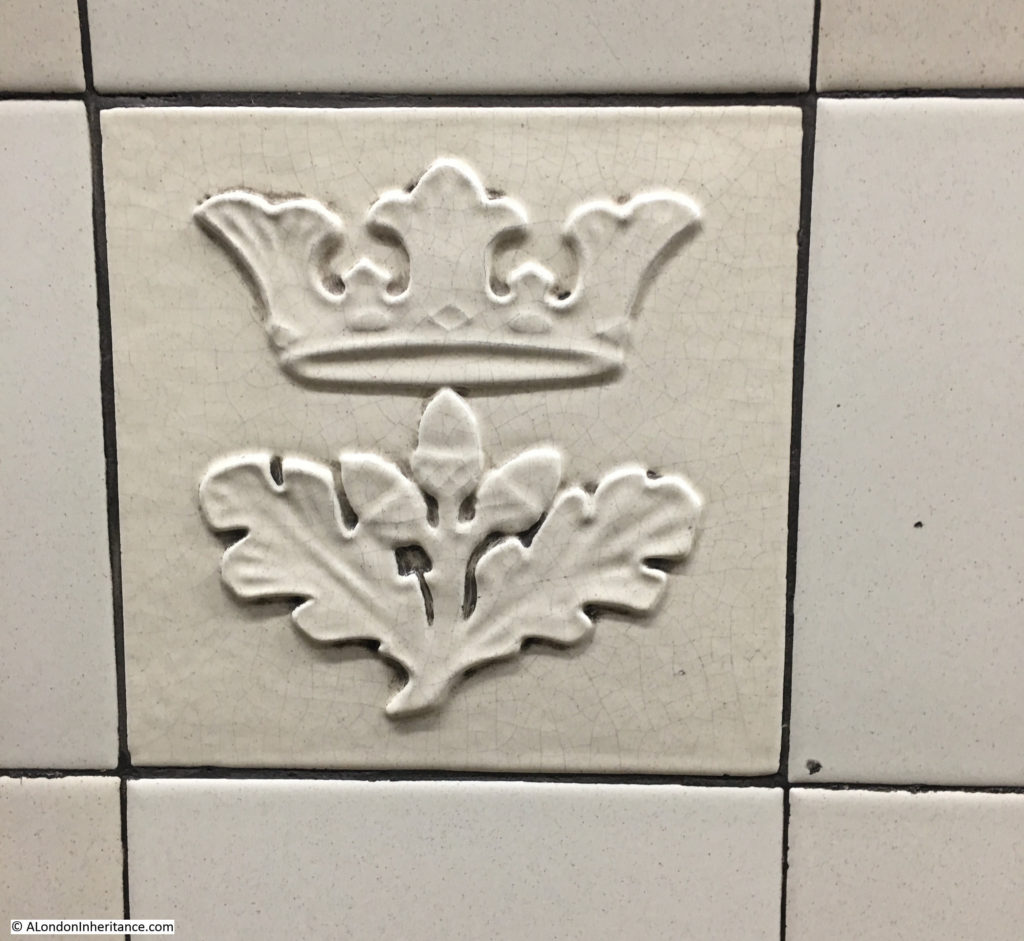 I suspect this is from the coat of arms for the county of Surrey as shown in the following shield where there a crown with a pair of oak leaves, but with a single acorn: 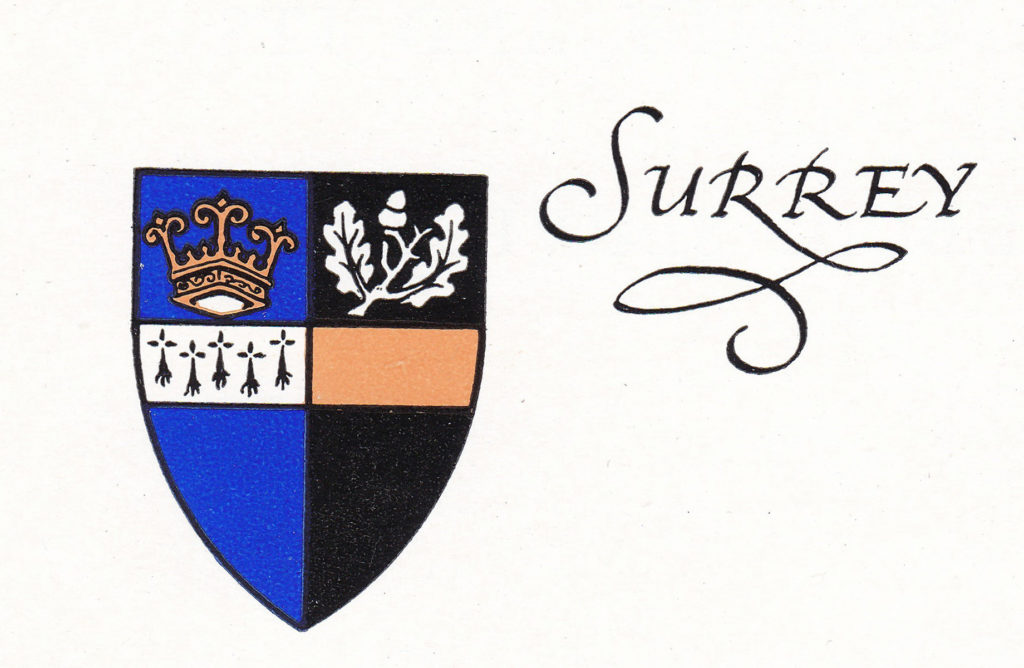 The pictures are from the book ‘The Youngest County’ published by the London County Council in 1951 to commemorate the creation of the County of London. The book includes an overview map of London and the surrounding counties which helped with identification of a number of the tile designs.

This included the following tile which has the design of a horse: 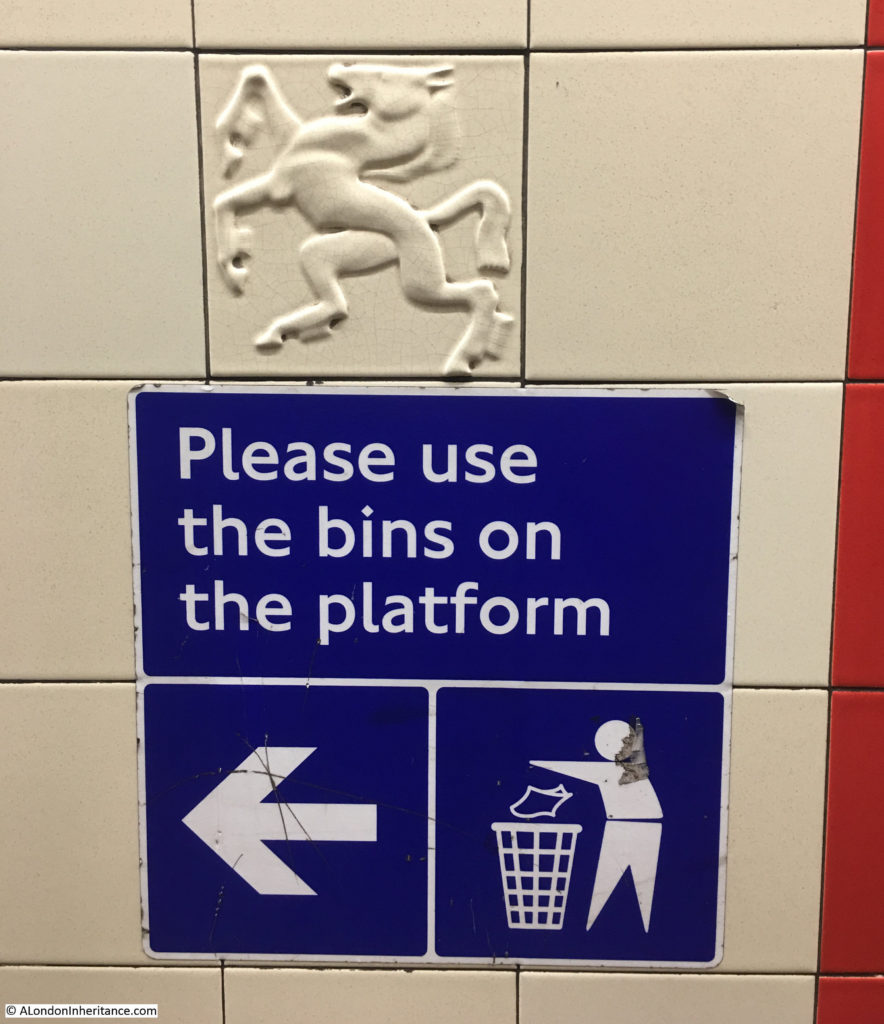 Which appears to be very close to the horse from the coat of arms for the County of Kent: 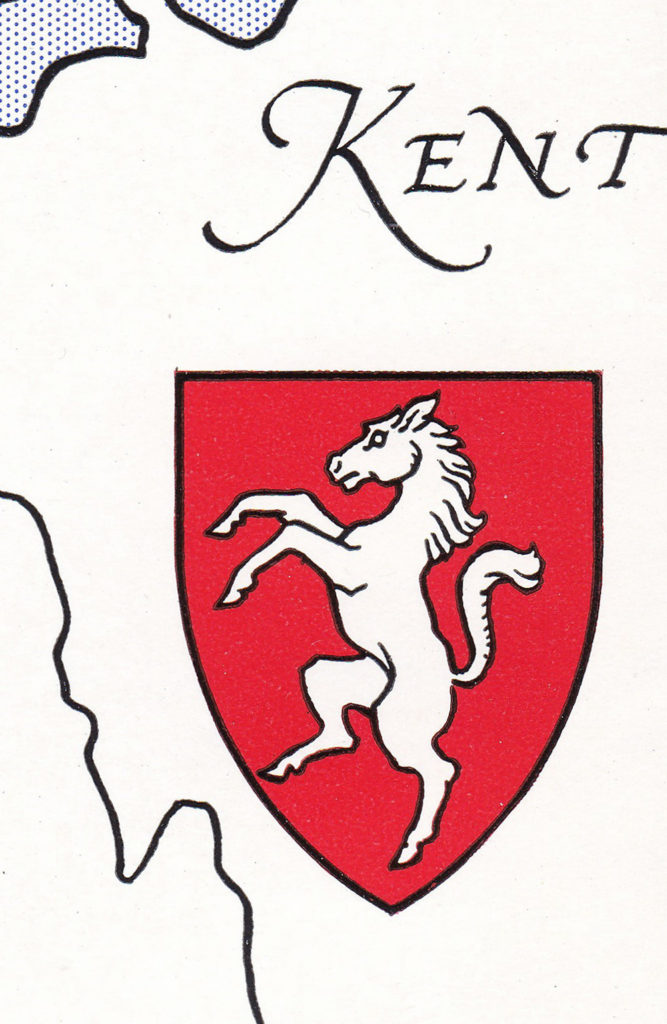 The following design appears to be some mythical winged beast. A fascinating design, but one I have been unable to identify: 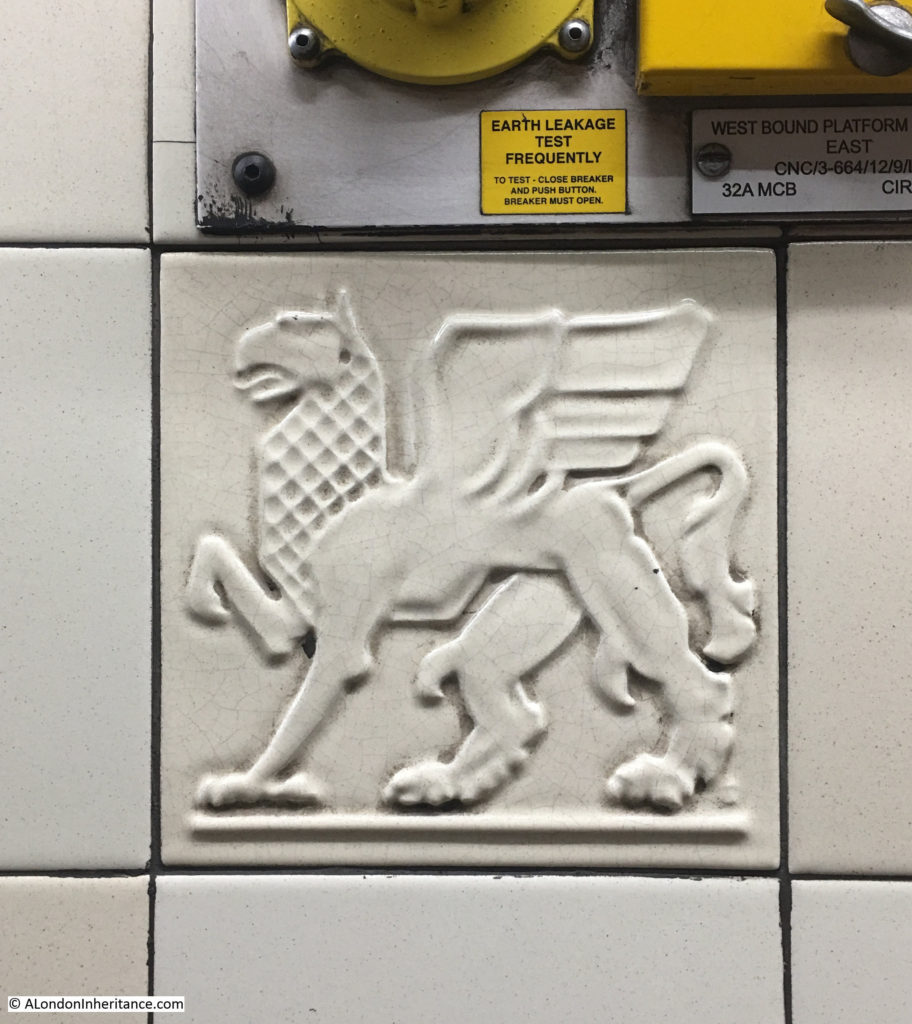 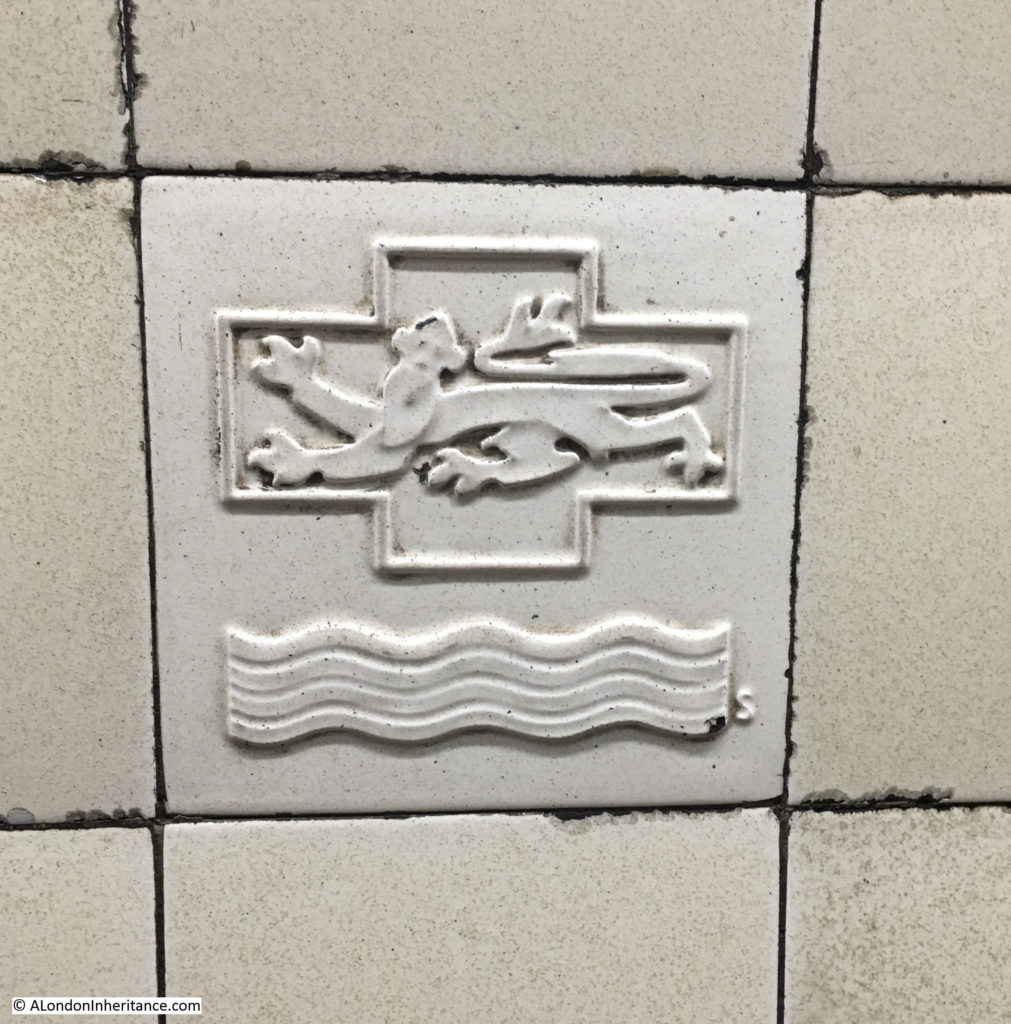 Which must be a representation of the Coat of Arms for the County of London, as shown below. Although the crown is missing, the “Cross of St. George charged with a lion of England” as described in the book The Youngest County which also describes the whole design, including the crown as “sets forth in heraldic language that London is the Royal Centre of England, situate upon the water”. 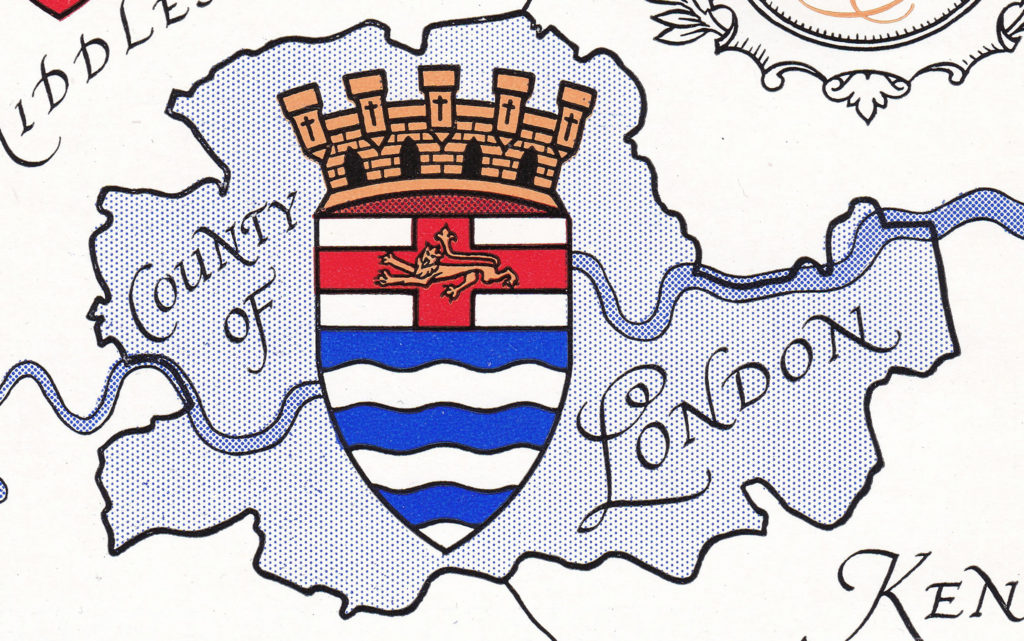 I hope that I found all the different designs at Bethnal Green, I spent some time walking up and down both platforms looking for, and photographing the tiles (and in the process attracting some rather strange looks from travelers on the Central Line).

Although I have shown single tiles, there are multiple copies of each of these designs on both platforms.

In 2006 many of the plain tiles along the platform were replaced with replica tiles. There are still some original panels of tiles, and I understand that the decorated tiles are also original, however I do wonder if the tile showing Crystal Palace may be a reproduction as it does not include Stabler’s trade mark letter ‘S’ and it does appear to have a slightly different finish to the rest of the tiles.

Stabler’s decorated tiles were also installed at St. Paul’s, Aldgate East, St. John’s Wood and Swiss Cottage Underground stations. I believe they are still to be seen at Aldgate, but not sure of the other stations – something to check when I can visit.

Harold Stabler died in London in 1945, however it is good to see that his designs live on at Bethnal Green.

20 thoughts on “The Tiles At Bethnal Green Underground Station”