I recently scanned some of my father’s photos which included the last photos he took in the early 1950s of the Royal Festival Hall. These photos show the area soon after the closure of the Festival of Britain when much of the infrastructure for the Festival was still in place.

At the end of this post I have put together a time sequence of photos of the site from 1947 through to 2015 showing the original site, during construction and photos taken in the early 1980s and 2015.

But first, the recently scanned photos, the first is of the Royal Festival Hall taken soon after closure of the Festival of Britain exhibition, from the footbridge alongside the Hungerford Railway Bridge. 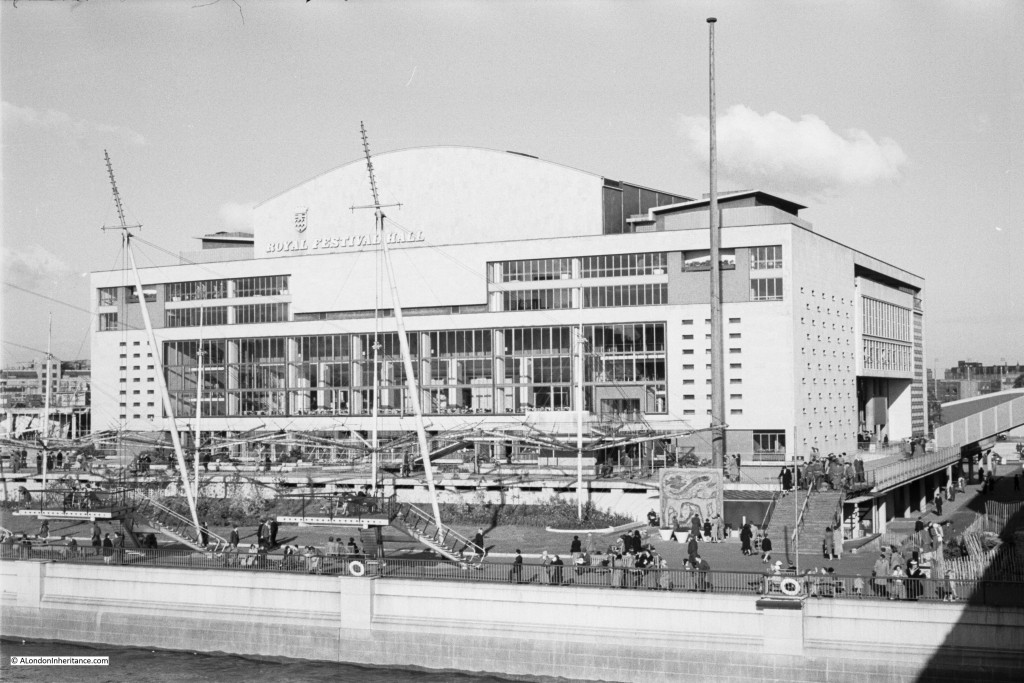 And from the same location in April 2015: 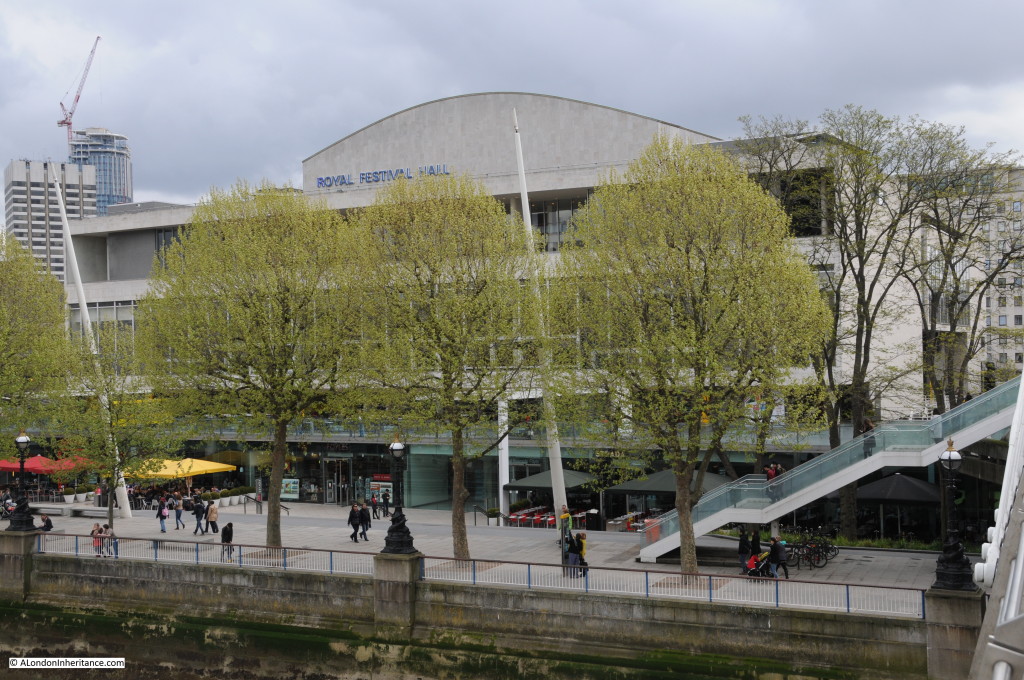 I planned to take the 2015 photo before the trees had come into leaf as when the leaves are fully grown the trees considerably obstruct the view of the hall. I was not early enough!

Please do not get me wrong, we do not plant enough trees, within the city and across the country, however there are some places where trees are in the wrong position. The Royal Festival Hall is, in my view, one of the very few buildings constructed soon after the last war that works well architecturally and is in the right location. The Royal Festival Hall was always designed to be seen from and across the River Thames and to provide views along to the City.

The trees in front of the building considerably obscure the building from the walkway across Hungerford Bridge and from the north bank of the Thames.

As the original Festival Guide stated:

“The Royal Festival Hall can claim to be a work of art in itself. The superb dramatic effects of space and vista, within the building and beyond it to the river and the city, are things which the visitor will discover for himself.”

Note also how in the original photo the Royal Festival Hall did not have any buildings in the background to detract from the view of the hall. A very different situation in 2015. To the right of the hall is the building that was the downstream building of Shell Centre, but has now been converted from offices to apartments. To the left is the Kent House Tower above the London TV Studios and behind that with the crane on the top is the South Bank Tower, again another building being converted from offices to apartments.

Walking a short distance further along the Hungerford footbridge, we can take a look down at the walkway in front of the Royal Festival Hall: 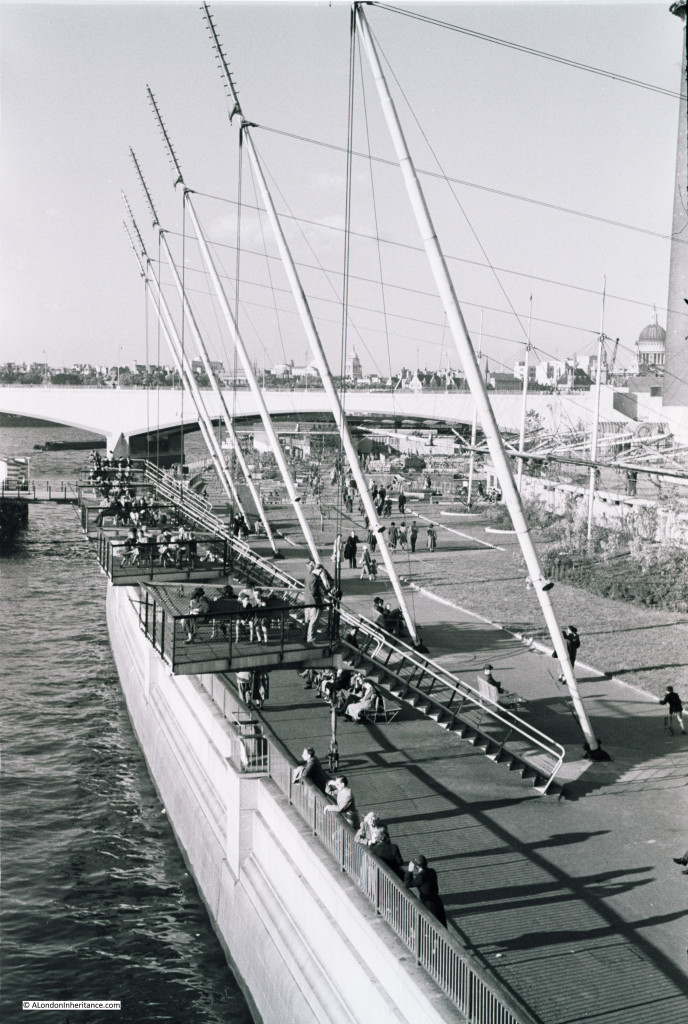 The poles are part of the decoration from the Festival of Britain. The photo also shows the observation platforms which I have heard of, but not seen photos of until scanning these negatives. There were six of these raised platforms extending just over the river wall and must have been a fantastic place to sit and view the surroundings.

At the far right of the photo is the Shot Tower, to the left can just be seen the walkway to the river pier, and in the distance is an excellent view over towards St. Paul’s Cathedral. 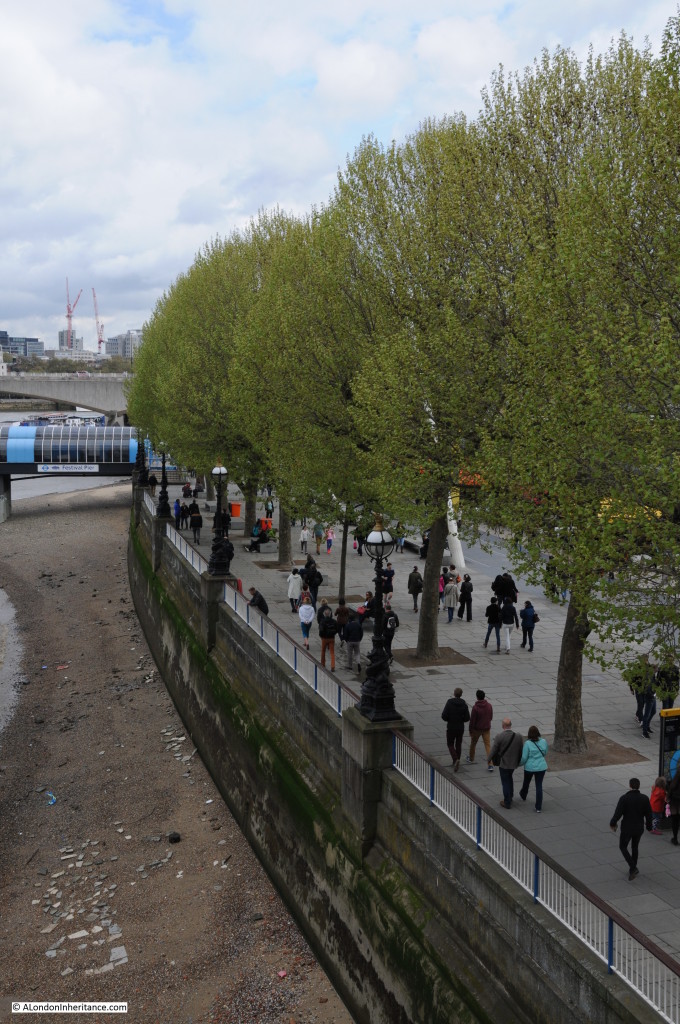 The observation platforms are unfortunately long gone, and later replicas of the poles that can be seen in the original photo are just visible, however the view is considerably obstructed by the trees. Again, an example of why I would argue that this area of the Southbank is the wrong place for trees and their removal would open up both the view of the Royal Festival Hall and the views along the river and to the city.

The guide-book for the Festival of Britain shows the area in front of the Royal Festival Hall including the six observation platforms: 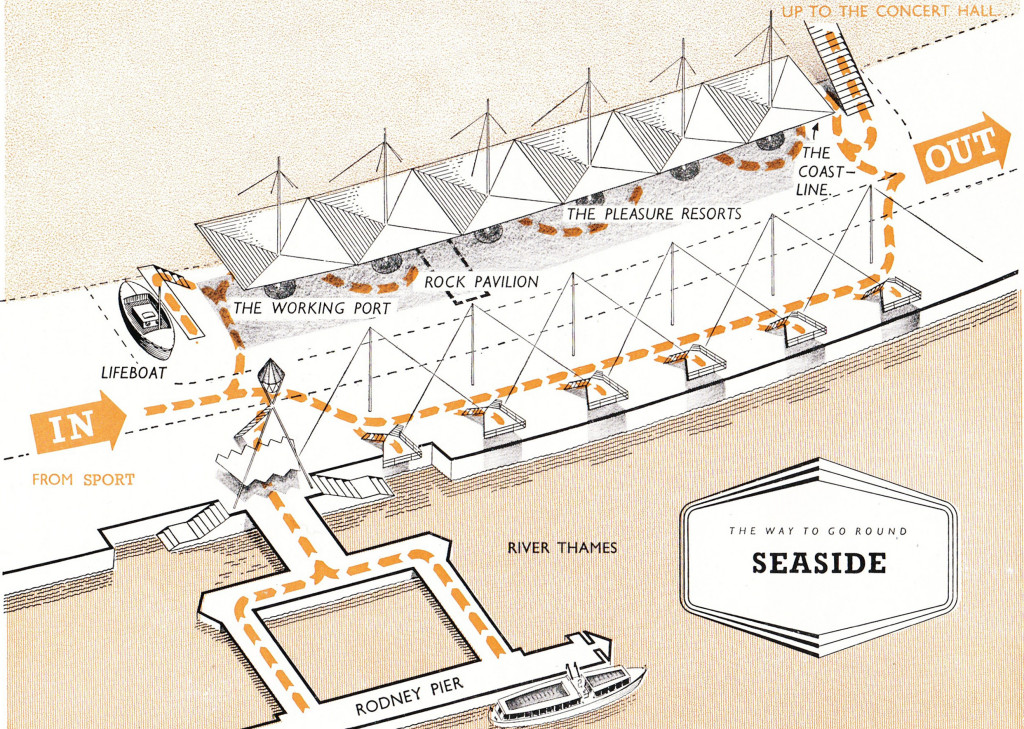 Walking almost to the end of the footbridge, we can look down and watch those out for a walk along the Southbank: 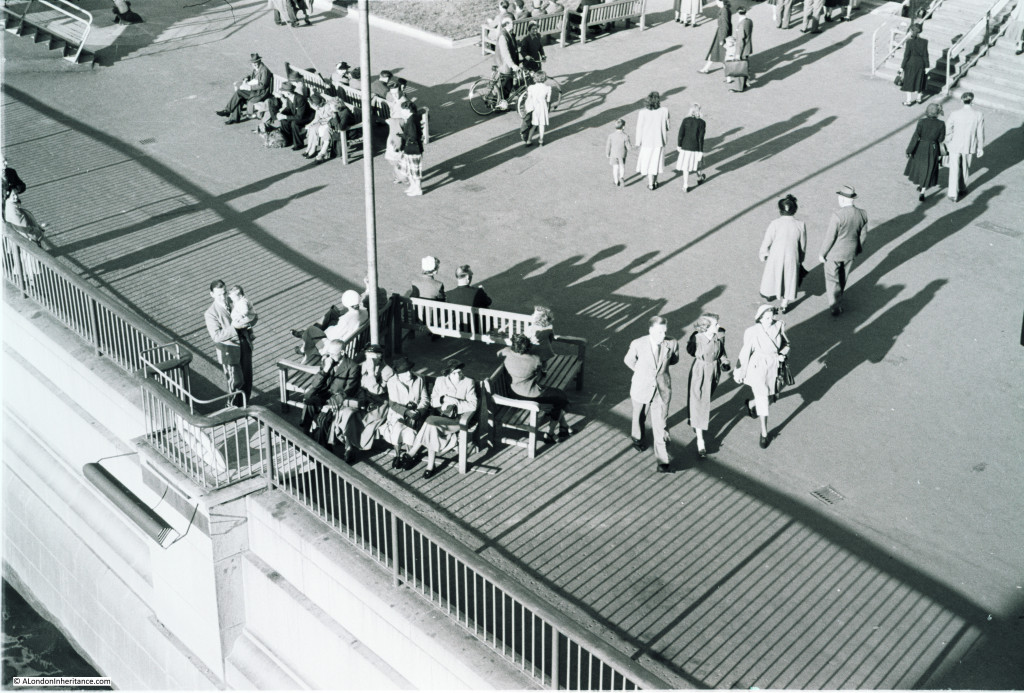 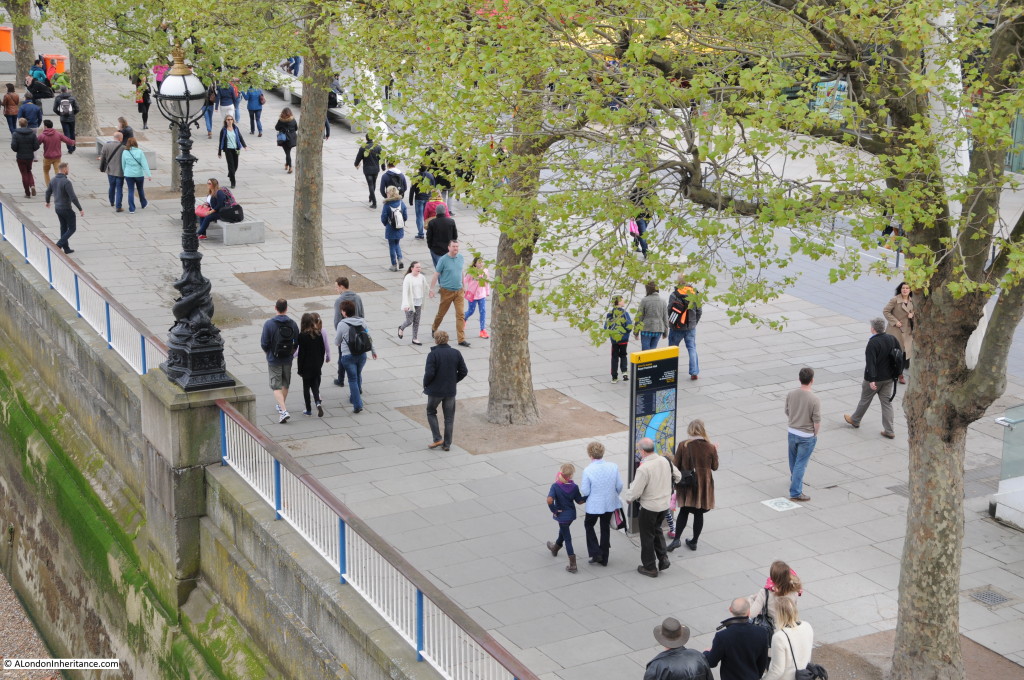 And a final view across to the Royal Festival Hall, with the Shot Tower on the left: 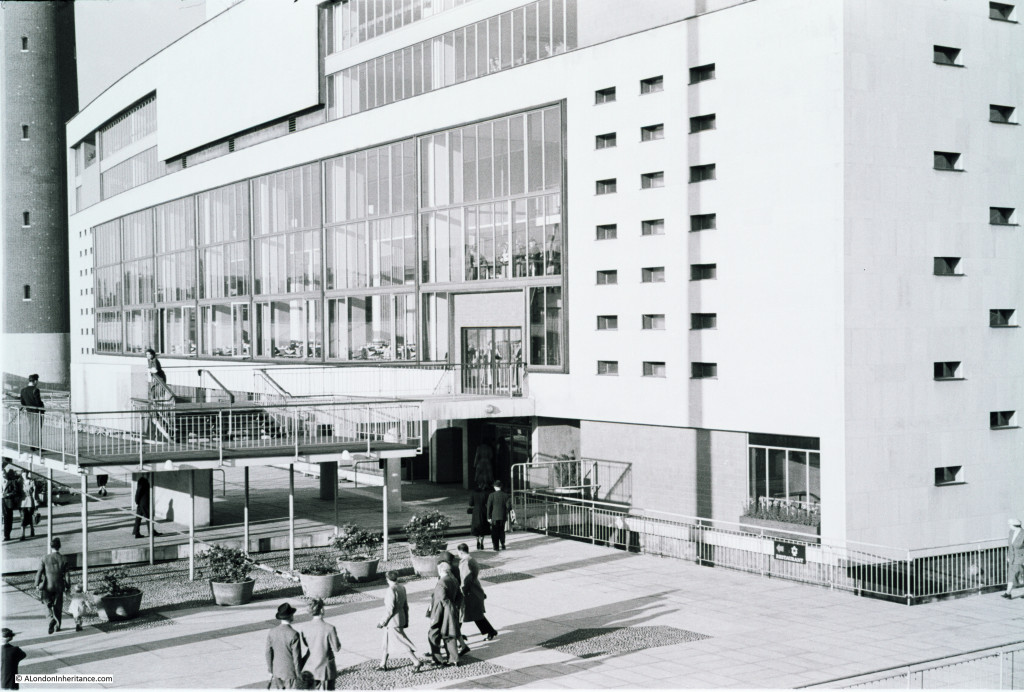 During the Festival, the Shot Tower had a Radio Telescope aerial mounted on the top. I had always assumed this was for decoration only, however the Festival Guide explains that it was a fully working system that would bounce radio signals off the moon, allowing visitors to see the time delay between the transmitted and reflected signal. The aerial system was mounted on a redundant gun mounting which could be moved to allow the aerial to track the moon.

From the Festival Guide Book:

“The Tower has been one of the landmarks of London since it was built-in 1826. It remains the only old building on the site, to serve as a beacon for the Festival. It is a beacon in two senses: it is a modern lighthouse with a double flashing beam welcoming visitors as far as 45 miles away when the weather is clear; it is a radio beacon directing radio signals to the moon and beyond into space.

The lighthouse mounted at the top will flash from sunset to Exhibition closing time. It has a power of 3 million candles. It is of the most modern all-electric design and so takes up far less space than the older types which needed weighty lenses to intensify the beam. The light itself comes from a lamp of three thousand watts; an automatic device ensures that a second lamp can swing into position should it fail. This lighthouse optic is the work of Chance Brothers Ltd., who made all the glass for the original Crystal Palace a hundred years ago.

The radio beam is above the lighthouse optic. The most obvious part of it is a large reflector which beams the signal from the aerial within it on to the moon. This is part of the radio telescope and is connected with the display in the Dome of Discovery by underground cable. In the Dome visitors can transmit signals to the moon and actually see them reflected back to the earth after about two and a half seconds.”

This was 64 years ago and I wonder if our public demonstration of science has progressed much since. 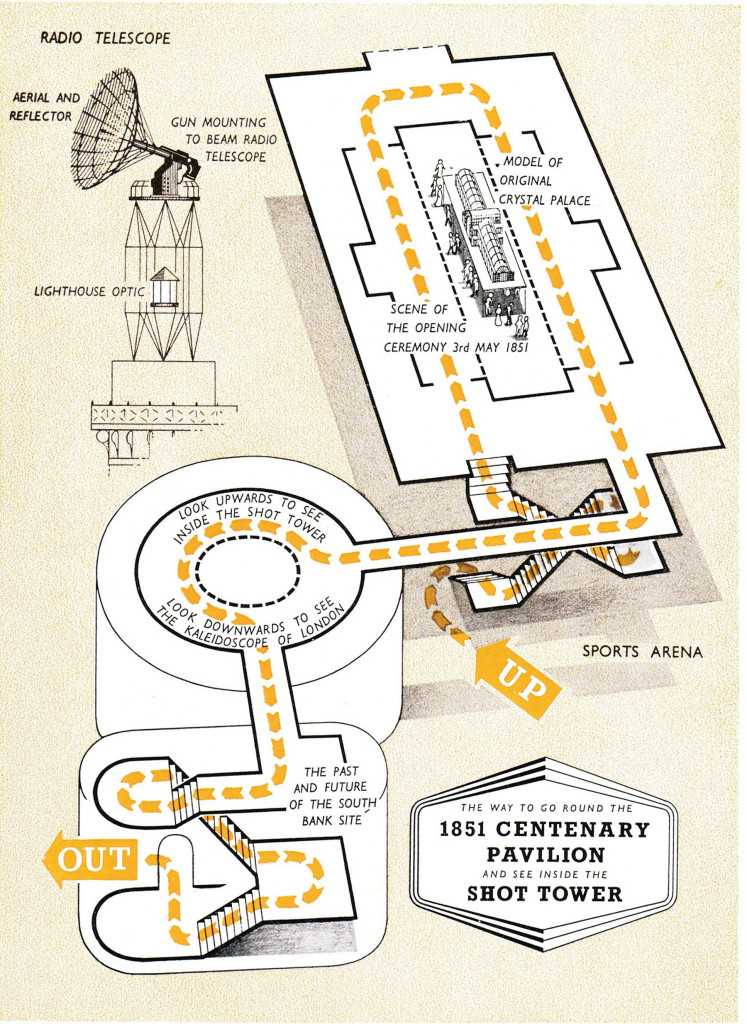 Also on the negatives were some photos of the following structure: 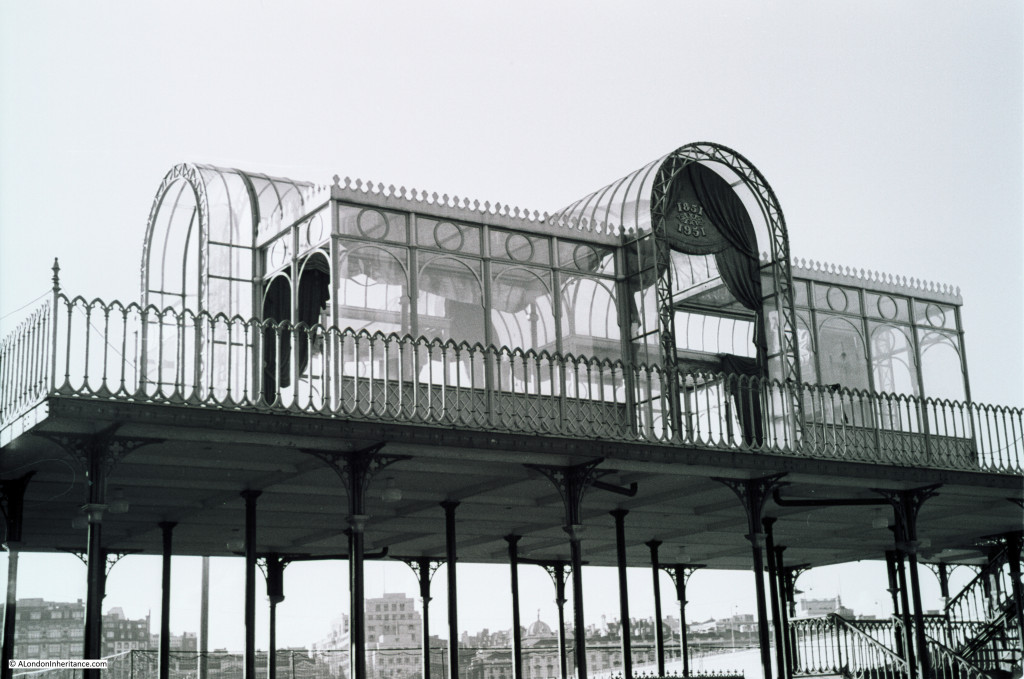 This was at the far eastern end of the Festival Hall site (Waterloo Bridge can just be seen at the lower right). The numbers on the central arch are the years 1851 and 1951.

1851 was the year of the Great Exhibition held in the “Crystal Palace” in Hyde Park. This structure looks to be a very rough approximation of the original Crystal Palace building. Both exhibitions had a very similar theme to demonstrate the country’s strength in industry and science.

I have featured this area of the Southbank in a number of posts to highlight different periods in the development of the site. I have brought the photos taken by my father and myself together in the following sequence to show how the site has changed from 1947 to 2015.

Starting in 1947, and the site still retains the original buildings with the Shot Tower on the left and Lion Brewery building to the right: 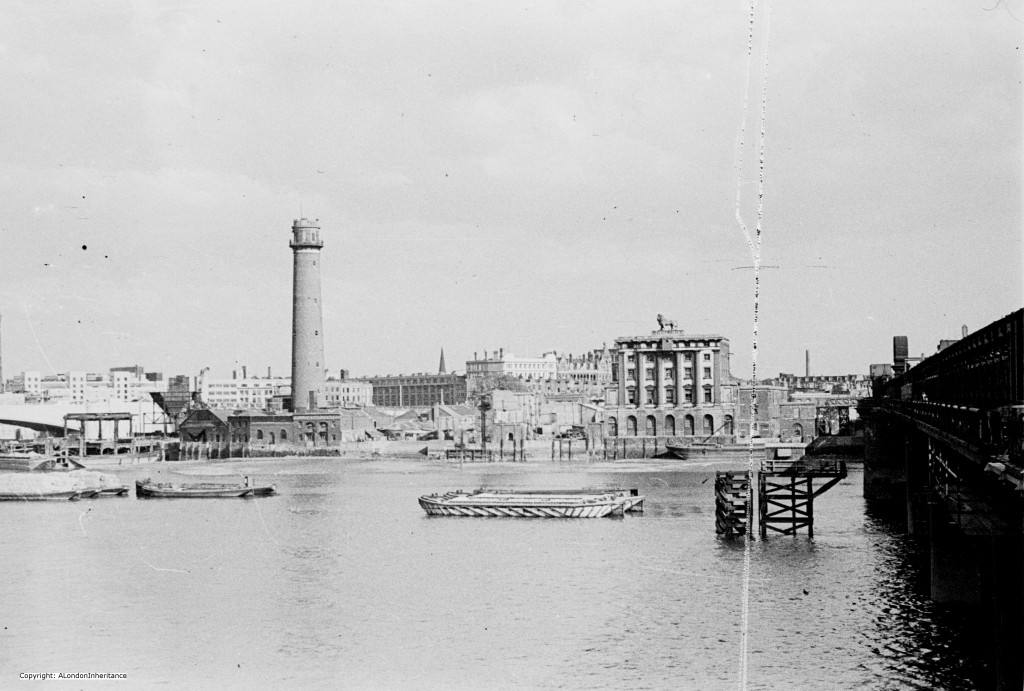 Construction starts. This is a panorama of several of my father’s photos to show the whole of the building site that would become the Royal Festival Hall:

Construction is now well underway with cranes and scaffolding surrounding the building (compare this with the 1947 photo): 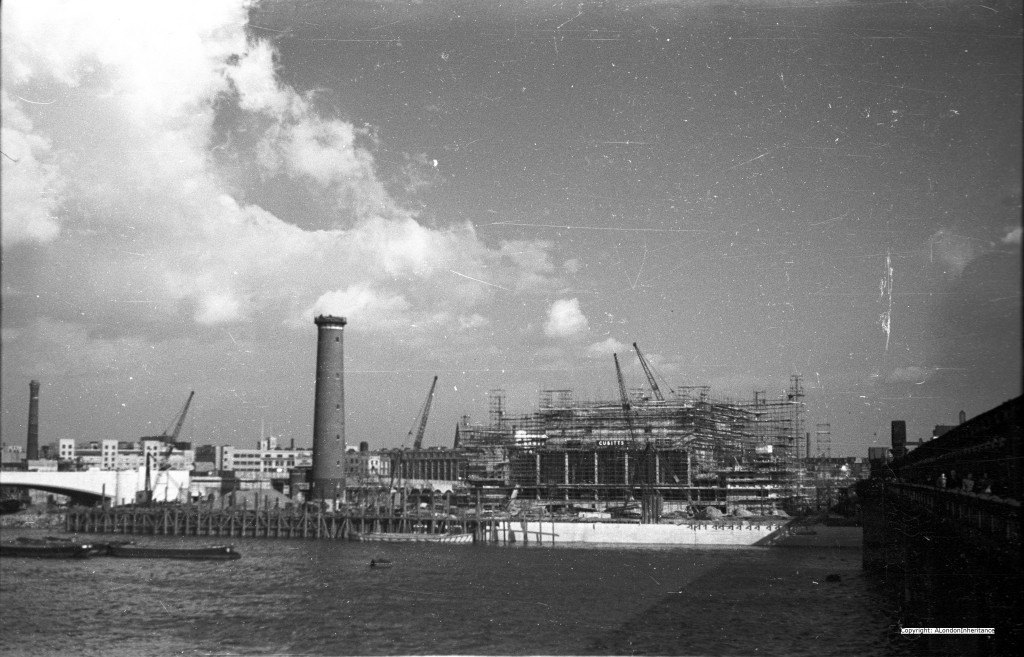 And repeating the photo from this week’s post, the completed Royal Festival Hall just after the Exhibition:

Now fast forward 30 years to the early 1980s and this is one of my photos of the Royal Festival Hall. Still no trees and the hall is an impressive site from the north bank of the Thames: 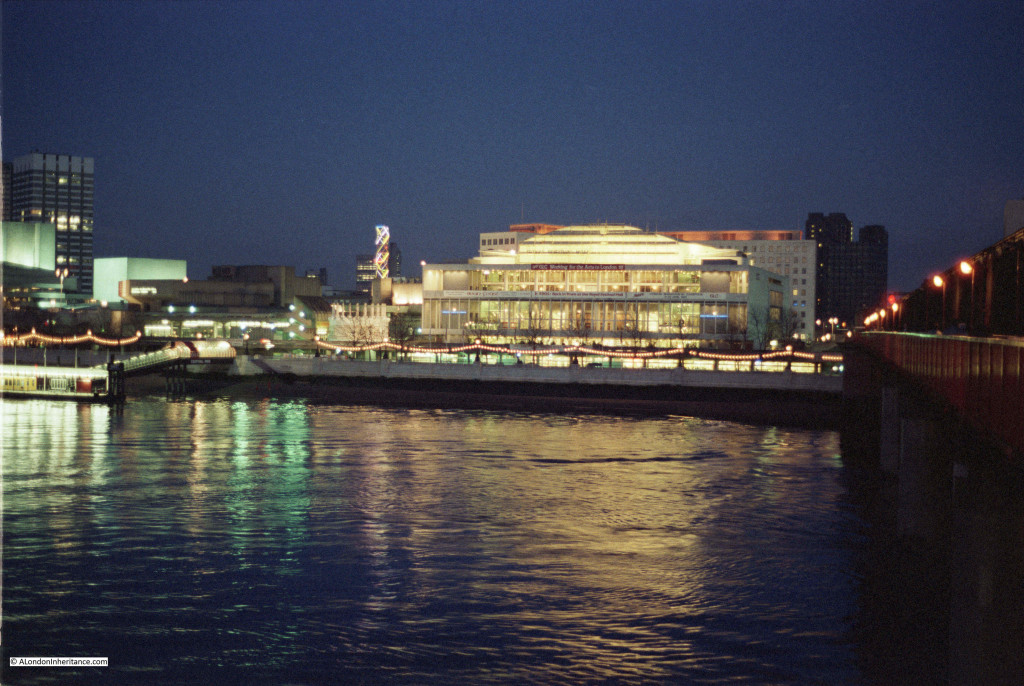 Summer 2014 and even from the height of the walkway along the side of Hungerford Bridge, the hall is hiding behind the trees: 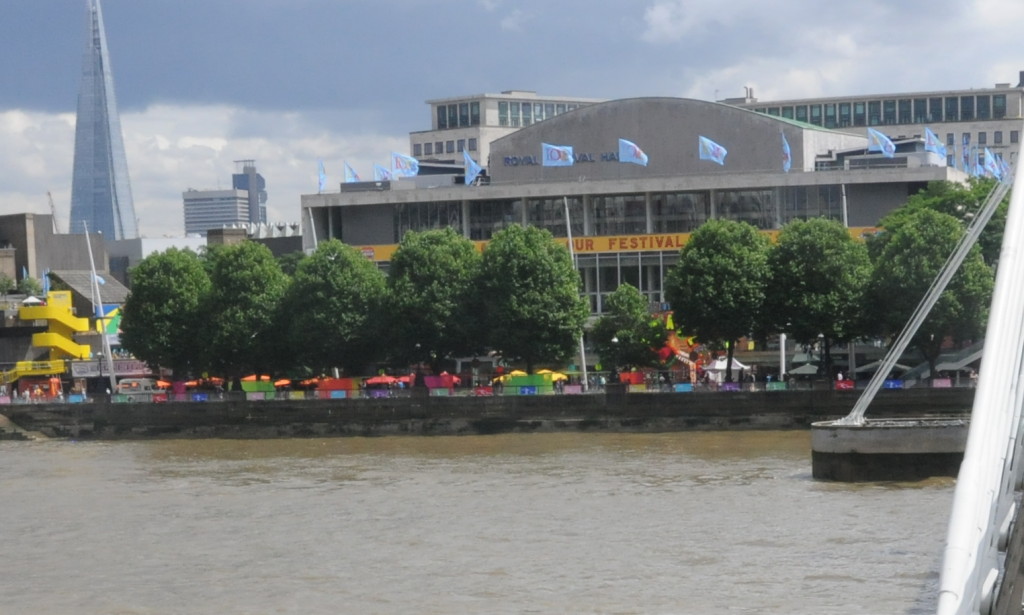 The guidebook to the Festival in the section on the Royal Festival Hall explains that it is a work of art in itself  and “the superb dramatic effects of space and vista, within the building and beyond it to the river and the city“. With the way that London is growing, the opportunity to appreciate space and vista at ground level is diminishing. It would be good if the area in front of the Royal Festival Hall could be opened up again to meet the original intentions of the architects.

You may also be interested in my other articles on this area:

The Royal Festival Hall – Before, During And After Construction