For this week’s post, I am returning to my project to track down all the sites listed as at risk, in the 1973 Architects’ Journal issue on East London. You can find my first post explaining the thoughts behind the 1973 publication and the changes that were taking place across East London here.

I had a day off work on a freezing cold day in February, and tracked down the locations in Bethnal Green and Stepney. When I started working on a post, it was looking like a very long post, and the last week has been a very busy work week, so I will cover the full walk in a future post, and today explore the church of St. Dunstan and All Saints, Stepney.

The following is an extract from the 1973 Architects’ Journal map covering Bethnal Green and Stepney. The church is number 46, in the lower right corner of the map and is listed as “Medieval church of St. Dunstan’s – original parish church of Stepney”. 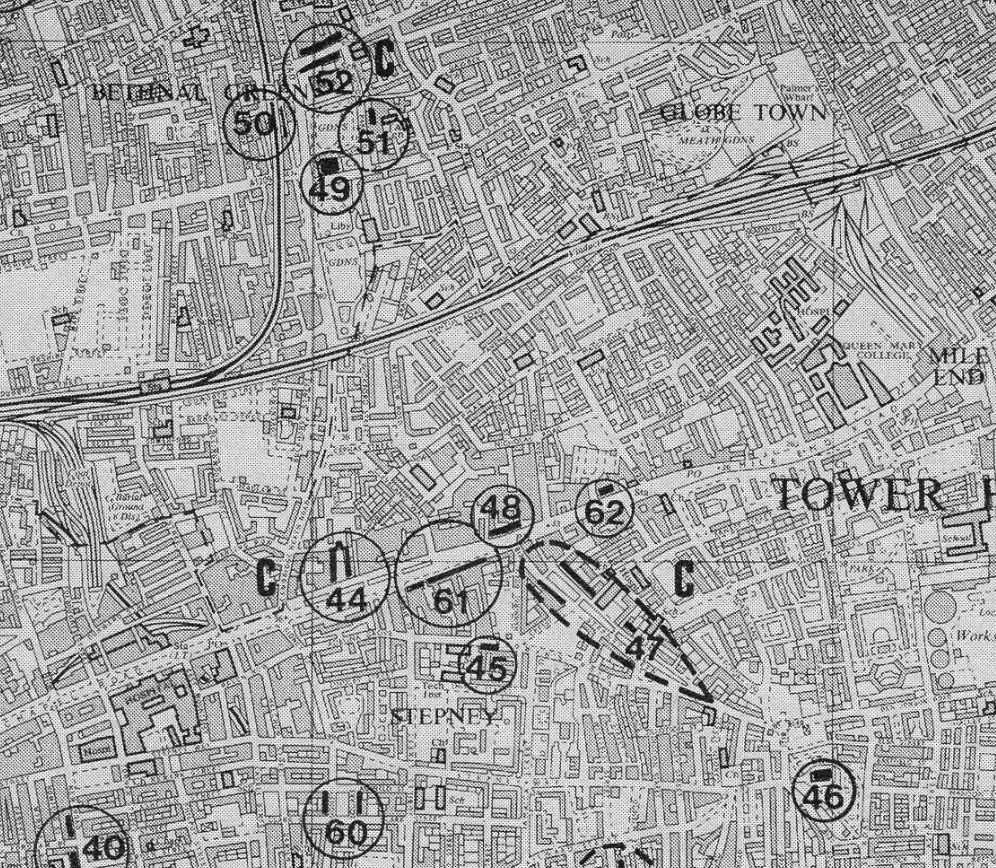 To find the church, I had walked along Mile End Road, then walked through Stepney Green (number 47 in the above map) and along to Stepney High Street where St. Dunstan and All Saints can be found within a large graveyard, although today there are not that many graves to be seen.

Approaching the church from the north: 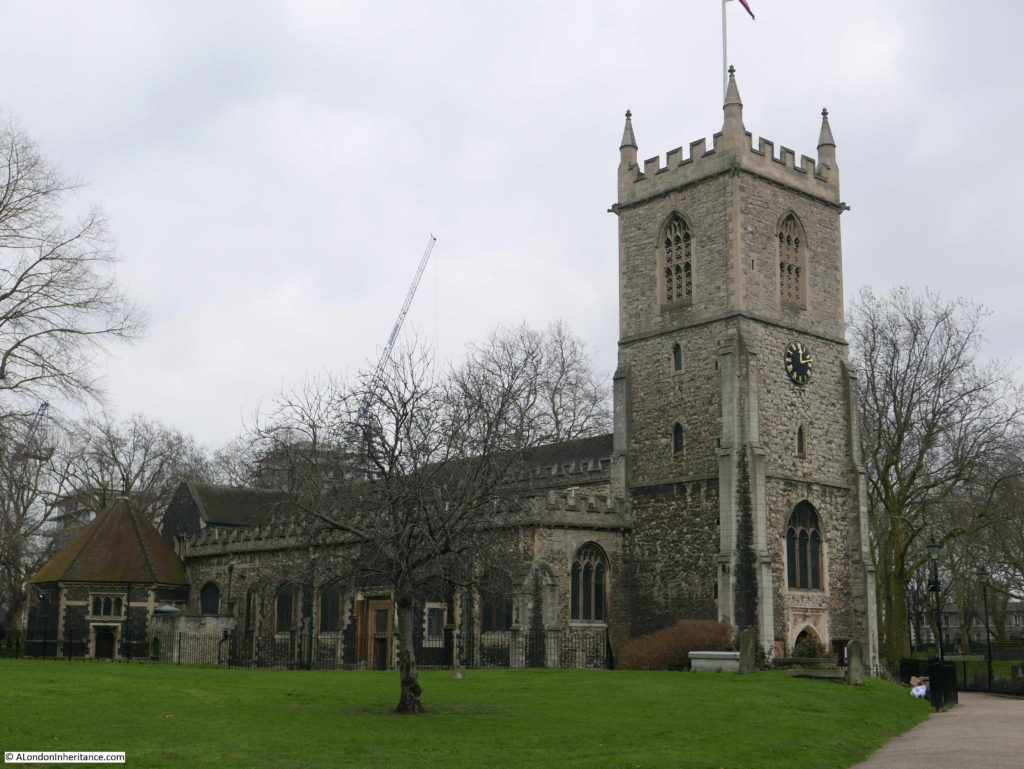 The church of St. Dunstan And All Saints is a very old church. A church was rebuilt on the site (implying there was an earlier church here) in the 10th century and later dedicated to St. Dunstan, the 10th century Bishop of London. Until the chapel that gave Whitechapel its name was built in the 13th century, it was the only church that served the whole of the parish of Stepney.

The church was rebuilt in the 15th century, and as with many other churches, was subject to changes in the Victorian period which included re-facing the exterior walls of the church.

Above the main entrance door are two carvings which both represent connections with the church. 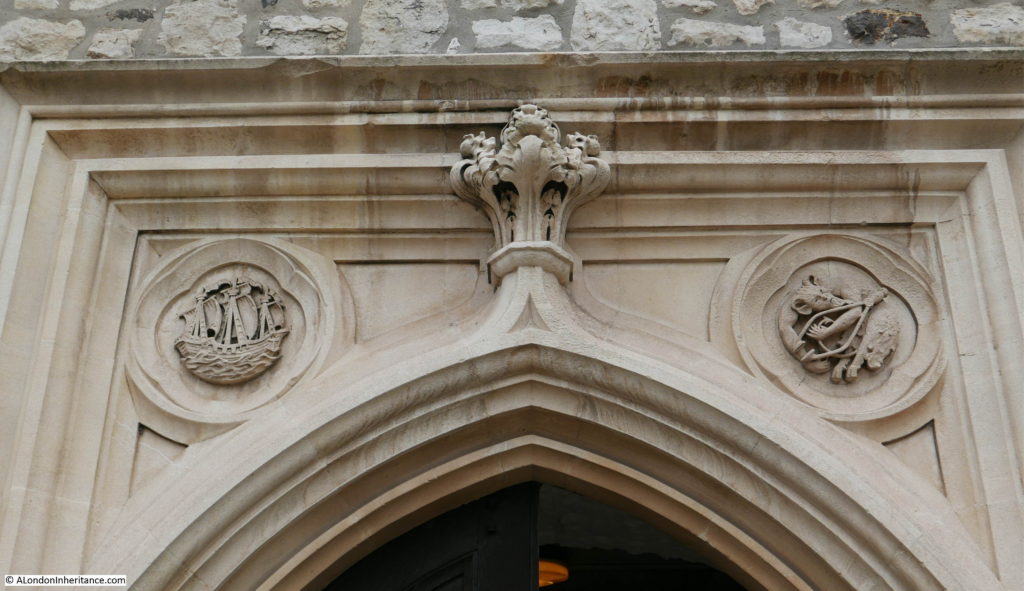 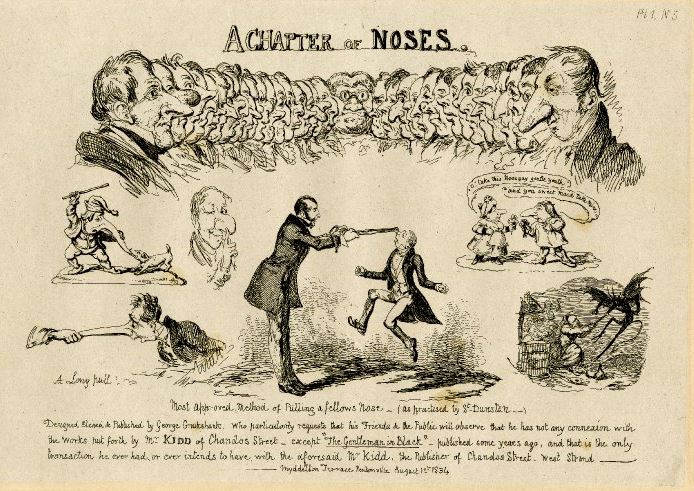 The carving on the left is of a ship and refers to the long association of the church with the sea and sailors. An information panel at the entrance to the church refers to the church being the mother church of the East End, and also being known as the Church of the High Seas. Many of the prints showing the church over the centuries show a very large flag, the red ensign, flying from the top of the tower (the flag flown by British passenger and merchant ships) and the church allowed the registration of those born at sea into the parish of Stepney.

The location of the church is interesting. In the following map from 1720, the church is shown in the middle of the map, surrounded by open fields. 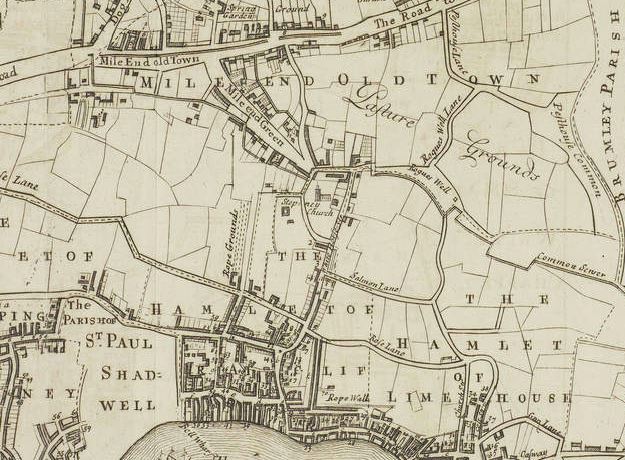 Mile End is to the north and to the south are the first streets that make up Limehouse and Shadwell. I have read some sources that claim the church initially start as a small chapel on a track between the Bishops Hall (just to the north of Mile End) and the river, however I can find no firm evidence to back this up. The origin of the large graveyard can be seen in the area surrounding the church and bounded by streets.

Early street and place names are always fascinating. Look to the right of the church and you will find “Rogues Well” and a Rogues Well Lane”. It would be interesting to know the origins of these names

In 1746 John Rocque was still showing the area as rural. The church is to the left, unfortunately on the edge of a page so I could not cover the same area as the 1720 map. 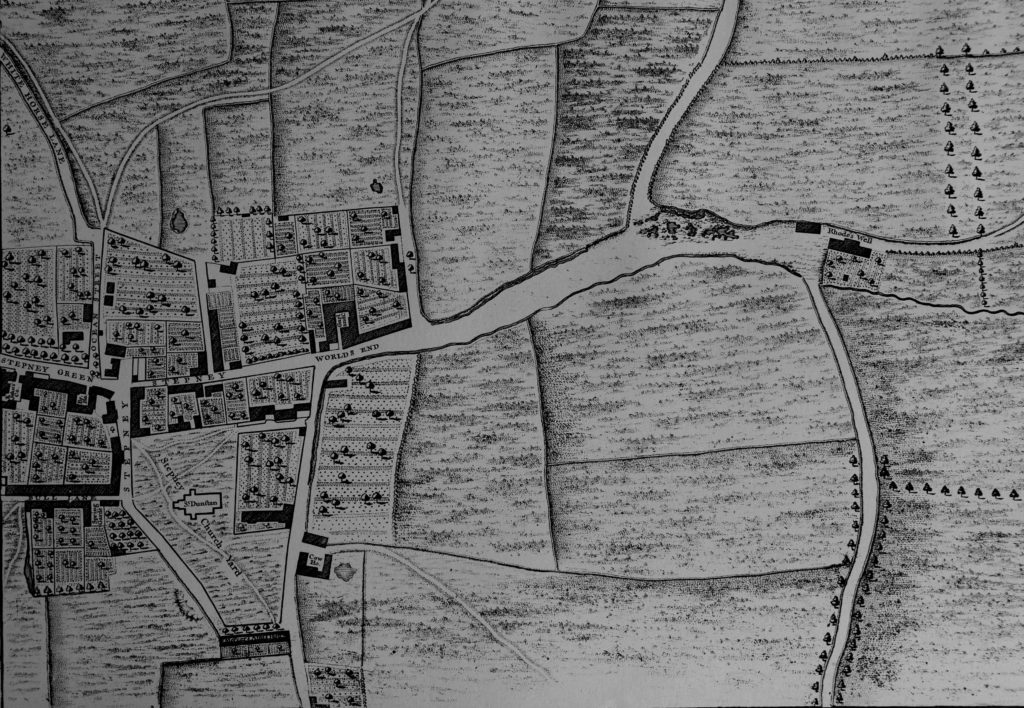 In the 26 years between the two maps, Rogues Well has changed name to Rhodes Well, although I wonder if the name had really changed and in making one of the maps, the name was heard or recorded incorrectly – I have always wondered how mapmakers identified the names of places and streets outside of the central City. There would not have been any street signs and names must have been written down based on recording the names given by the local population.

In Rocque’s map there is also what looks like a small stream leading off from the field at the end of Rhodes Well and heading to the right. Possibly one of the many small springs, wells and streams that disappeared underneath the dense streets and buildings that would soon follow.

In the 100 years after Roque’s map, the fields surrounding the church of St, Dunstan would disappear, however the church has kept its large graveyard which we can see covering the same area as shown in the two 18th century maps.

Burials ended in the main graveyard in 1854 and a small extension was used for a further two years. The graveyard became a public garden in 1886 after the majority of the gravestones had been cleared.

An article in the Tower Hamlets Independent and East London Advertiser on the 19th October 1901 gives an indication of the number of burials there must have been in the graveyard as in 1625, 2,978 people died of plague, with a further 6,583 in 1665 within the parish of Stepney. A good many would presumably have been buried within the graveyard as well as the thousands of Stepney residents over the centuries.

The interior of the church is magnificent and surprisingly bright given that it was such a dull day outside. 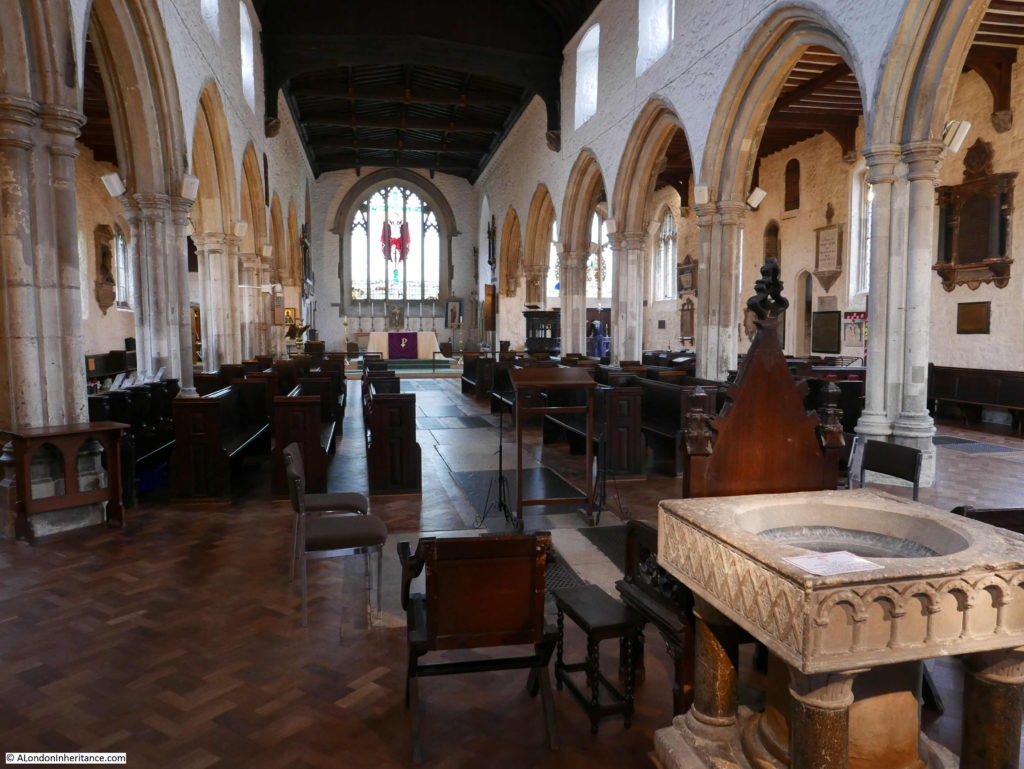 There was a major fire at the church in October 1901. The same newspaper article mentioned above started with the headlines “A Stepney Disaster – Parish Church Burnt Down – immense Damage”, however in a letter on the same page, the rector of St. Dunstan’s tried to correct some of the stories about the damage, whilst also appealing for funds:

“The Rector’s Appeal – So many are interested in this ancient church, that I am sure you will allow me to state exactly what happened. The church is not burnt down; the energy of commander Wells and the efforts of our excellent fire brigade have saved us from that, though the fire, the origin of which is unknown, had obtained a strong hold before it was discovered.

Our loss briefly is that the roof of the chancel and nave, the organ and vestries and Chapter House and their contents.

Of this our beautiful fifteenth century roof, and seventeenth century organ front and the old prints in the vestry are irreplaceable.

But the plates and requisites are intact, while the tower and the whole of the interior, i.e. walls with monuments, seats etc, are practically unhurt.

I see it said that we are insured for £11,000, and that this will cover all the damage. The first statement is true; I wish the second were, for while £11,000 would more than cover all damage, much of that sum is unavailable, e.g. insurance on the tower, seats, plate etc. , and I am already learning that there are many expenses which insurance cannot cover.

A considerable sum, possibly some £2,000 will be required over and above the insurance. Such a demand comes at a terribly awkward time.

Less than two years ago £5,000 was spent on the church and only a month ago we commenced the completion of our second church, St. Faith’s for which £1,800 is still required.

The ordinary expenses of such a parish as this, with its population of 24,000 in the heart of the East End, always taxes our resources to the very utmost.

I can, therefore, confidently appeal to the generosity of the public not to allow this fresh and unexpected burden to weigh down those who already have their hands full, and their pockets empty. I am, sir, yours faithfully, Arthur Dalton, Rector of Stepney.”

Luckily the funds were raised and the church restored: 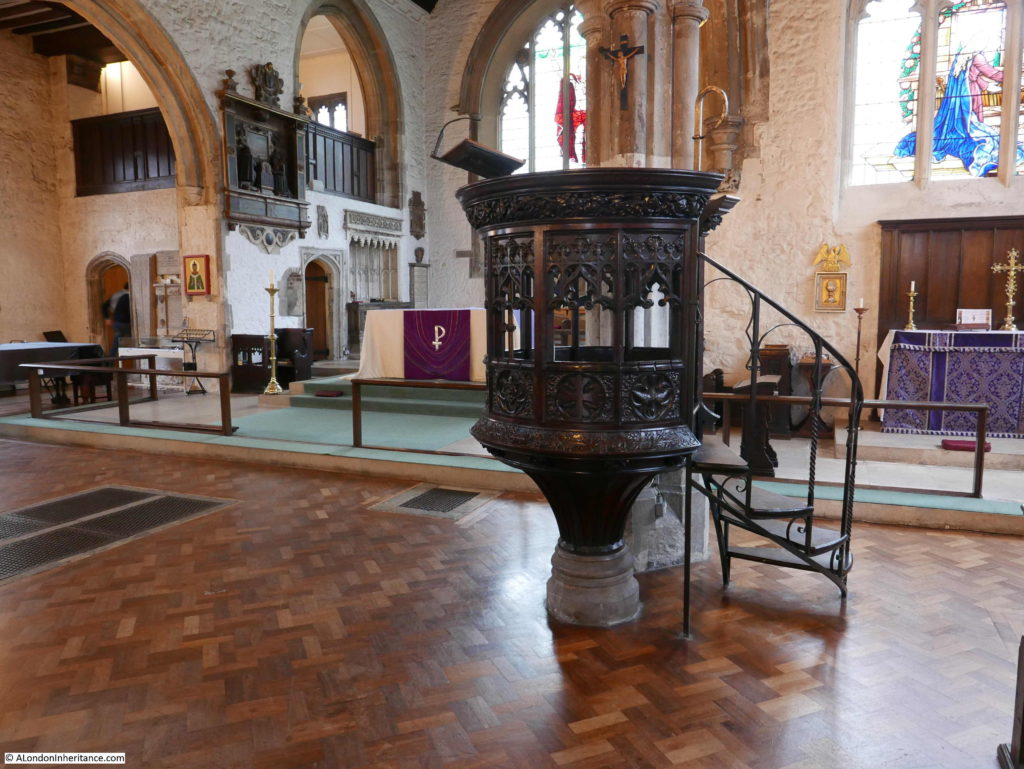 St. Dunstan’s survived the blitz, although there was serious damage to the surrounding area, given the proximity of the church to the river and docks.

Housing was urgently needed and towards the end of the war a number of prefab homes were built on some of the bombed land surrounding the church: 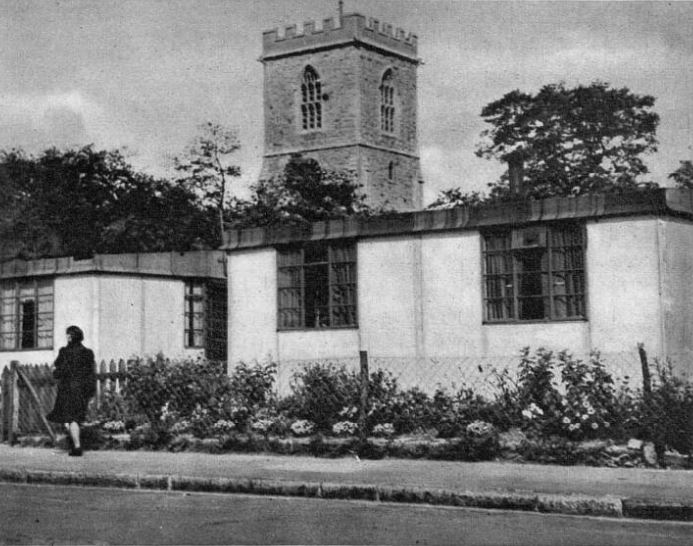 Prints from the 18th century show the size of the church, that it appears to have had a lantern at the top of the tower, and a really large flag. 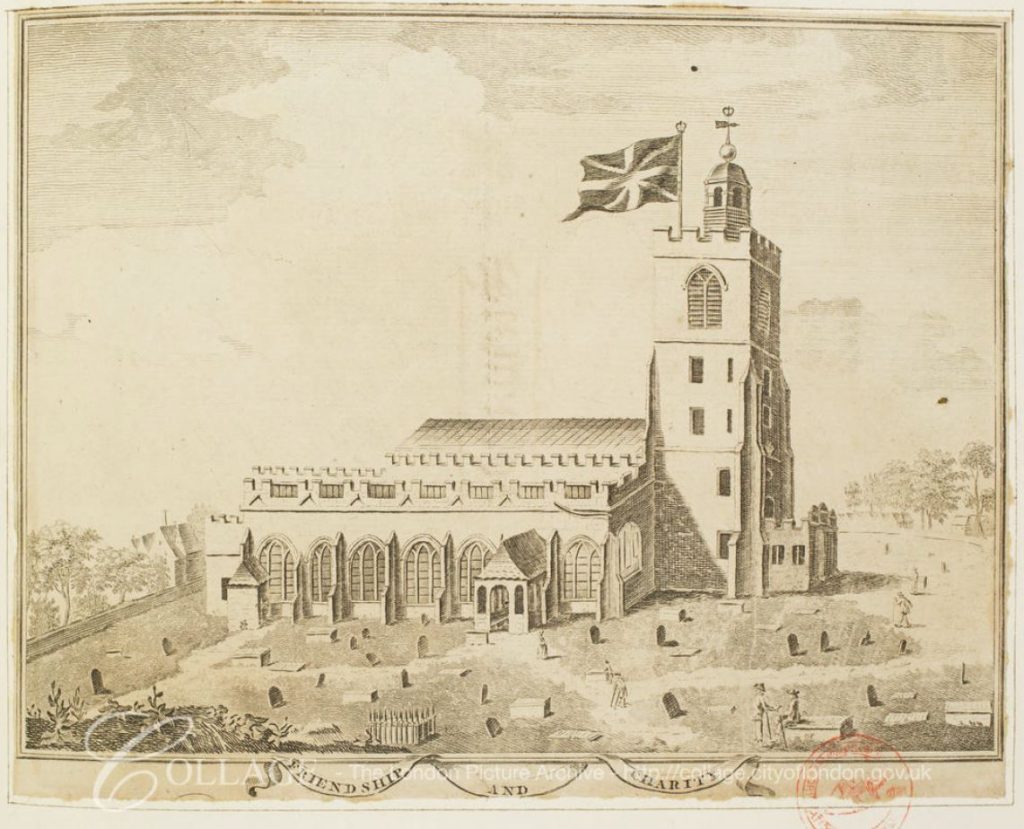 And in this invitation to a service in 1746, the flag looks to have grown: 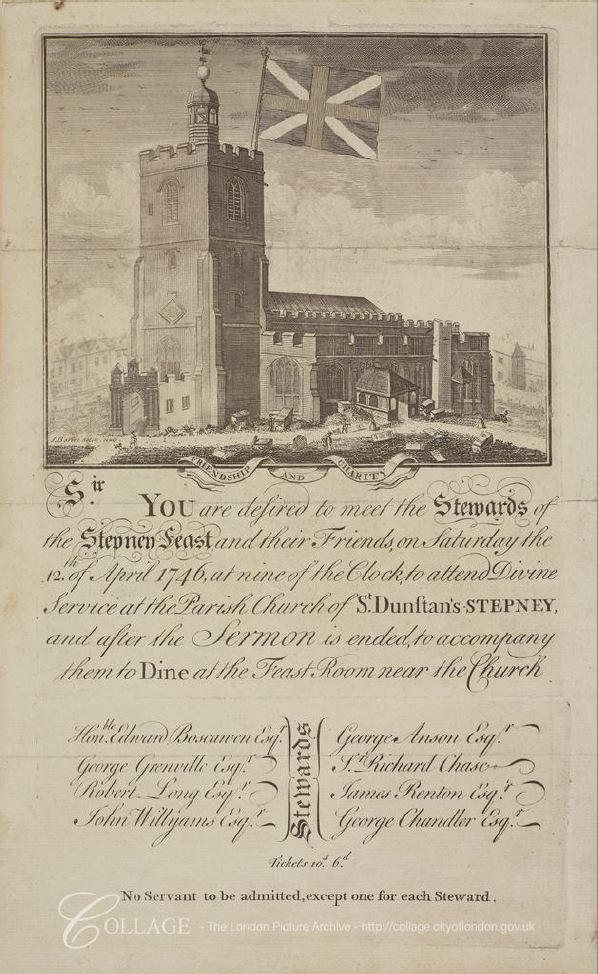 The invitation is to a service at the church to meet the Stewards of the Stepney Feast, and after the service to accompany them to the Feast Room near the church.

The Stepney Feast appears to have been a society, comprised of members from the maritime trades who collected money to “apprentice out orphans, and the children of the poor, to marine trades”.

Note the limitation on servants at the very bottom of the invitation – charity would only extend so far.

The connection between the church and the sea can be seen in the following photo from 1924. Preparations are being made for Harvest Festival and this included the hanging of fishing nets in the church. 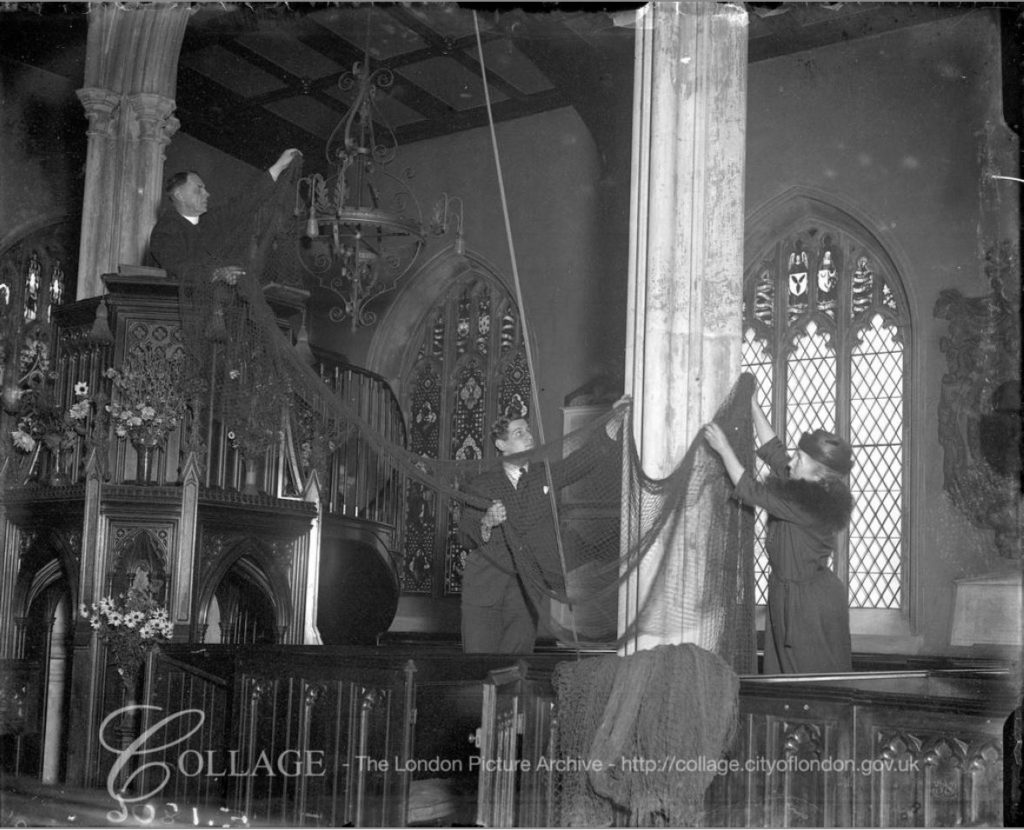 Inside the church today are a range of memorials, including these from the 17th century: 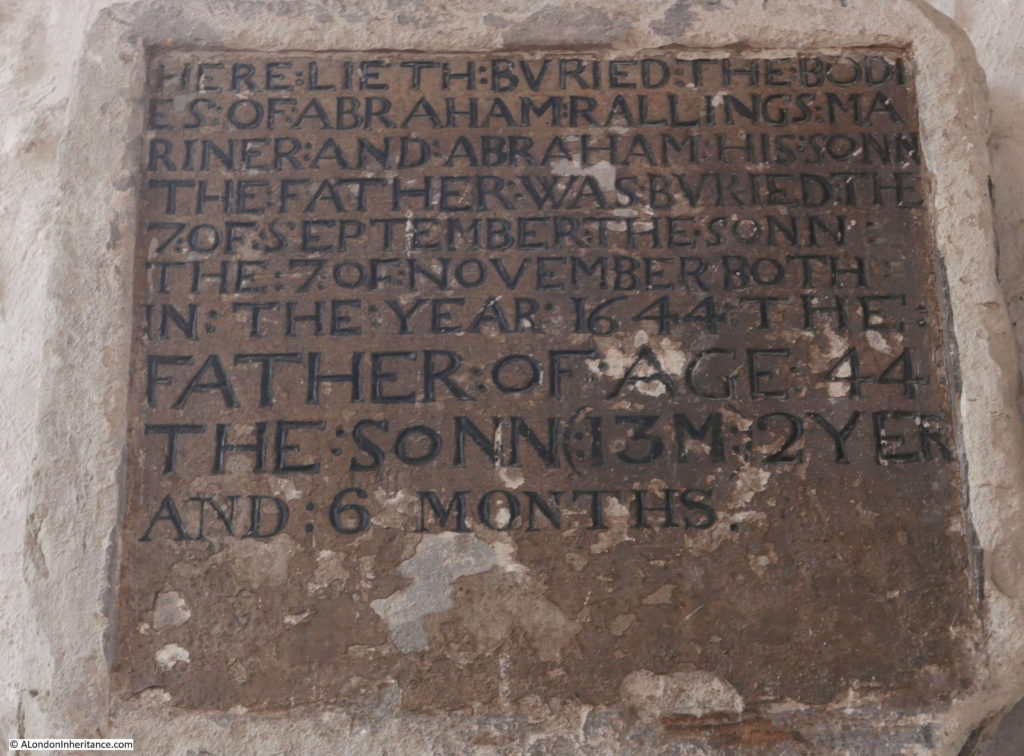 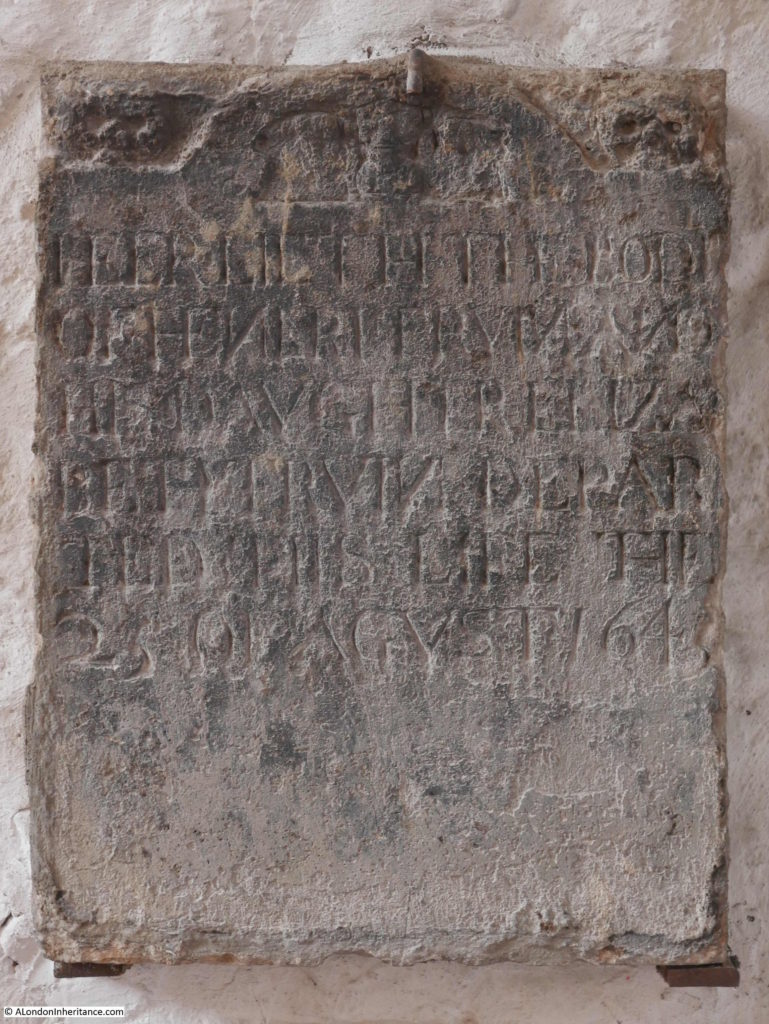 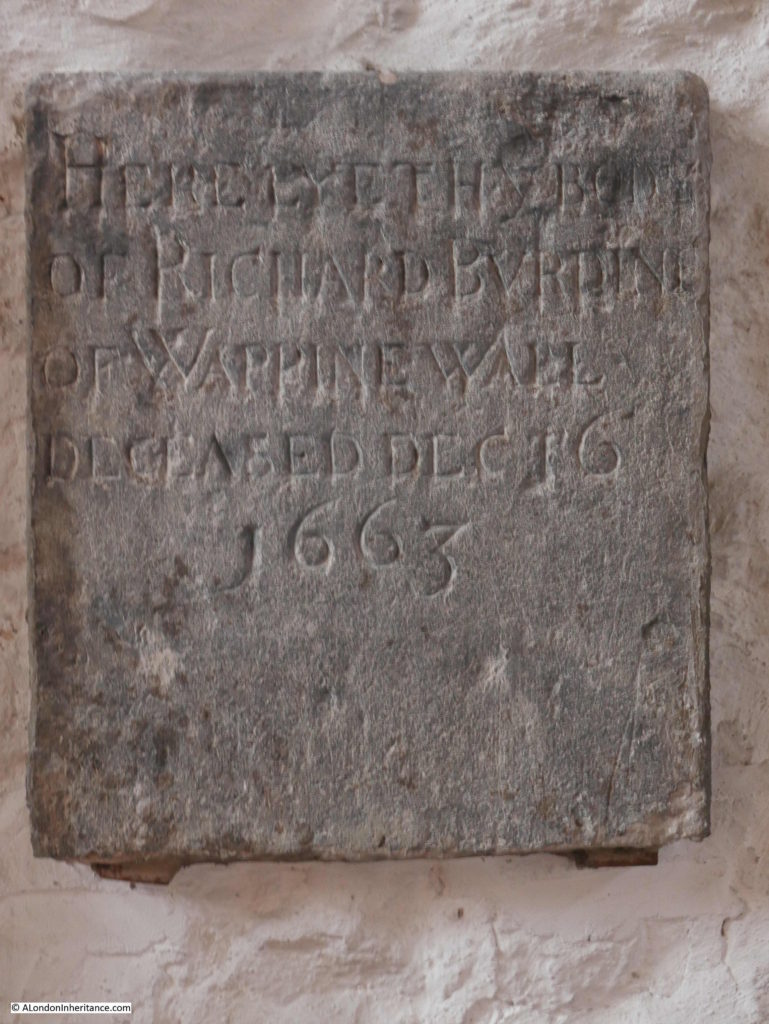 The first memorial above is to a Mariner and the trade given in the following memorial is Rope Maker. If you return to the 1720 map, you will see to the left of the church “Rope Grounds”. These would have been lengths of land needed to stretch out ropes during their manufacturer. 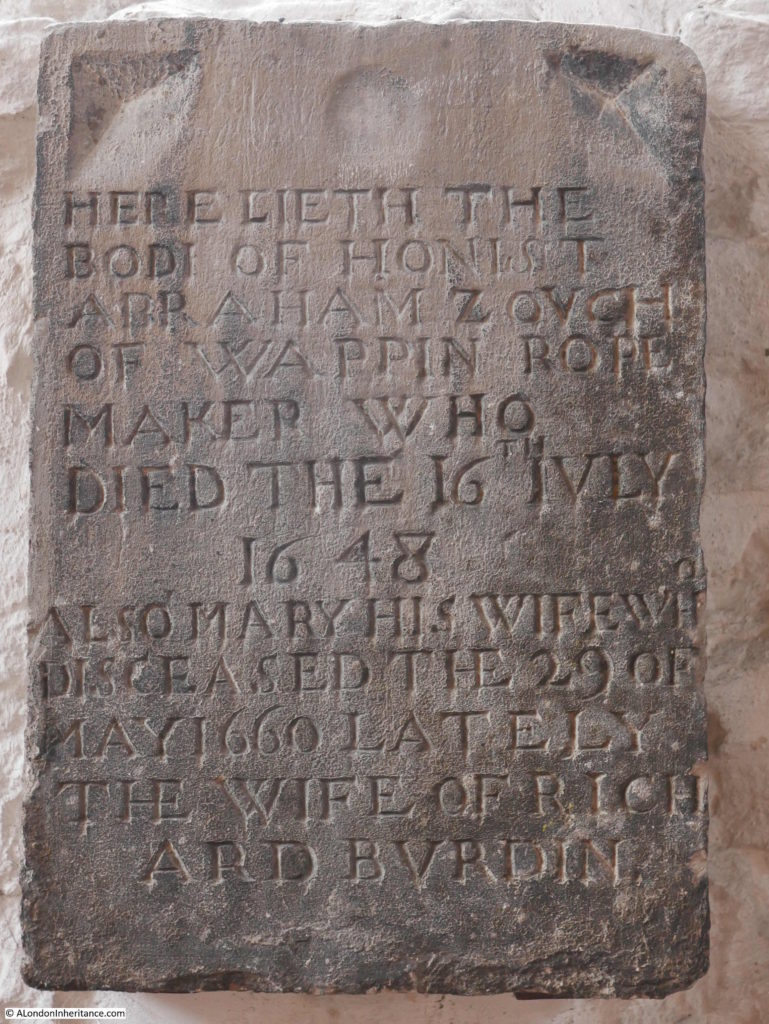 In the 1746 map, there is a track shown across the graveyard to the south east corner. This track is still in place today to provide the southern exit from the church. Trees form the boundary to the track, it must look magnificent when they are in full leave on a sunny day. 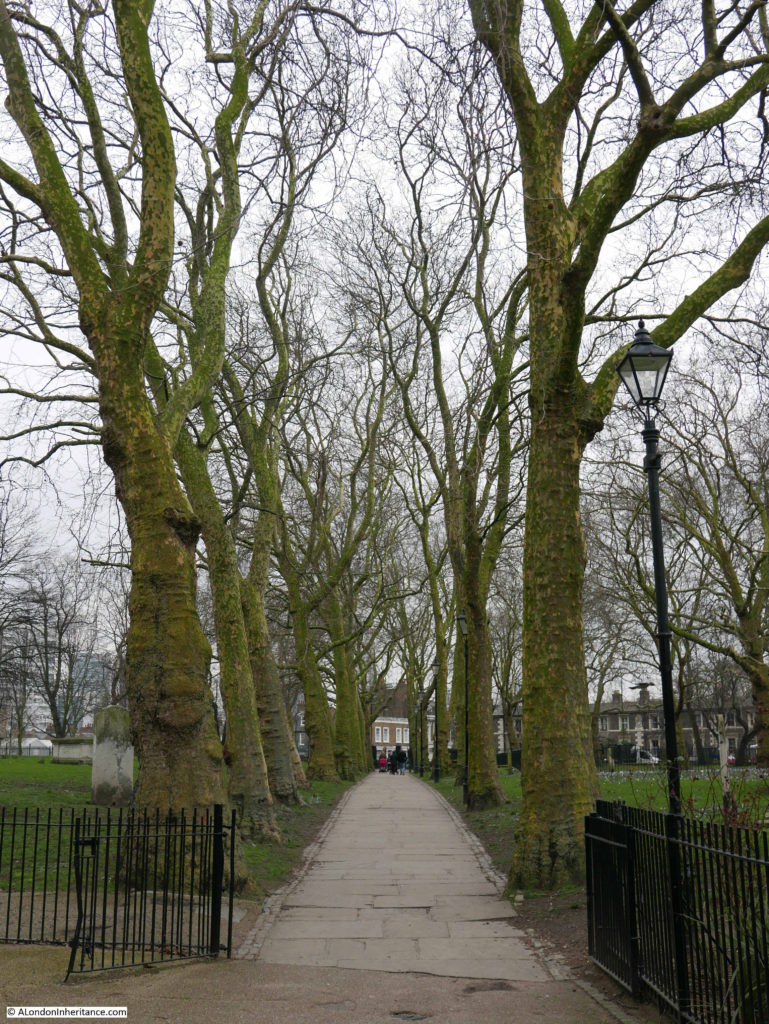 There is so much to find when walking these streets and on exiting the graveyard to the south, I found these rather lovely houses immediately opposite. 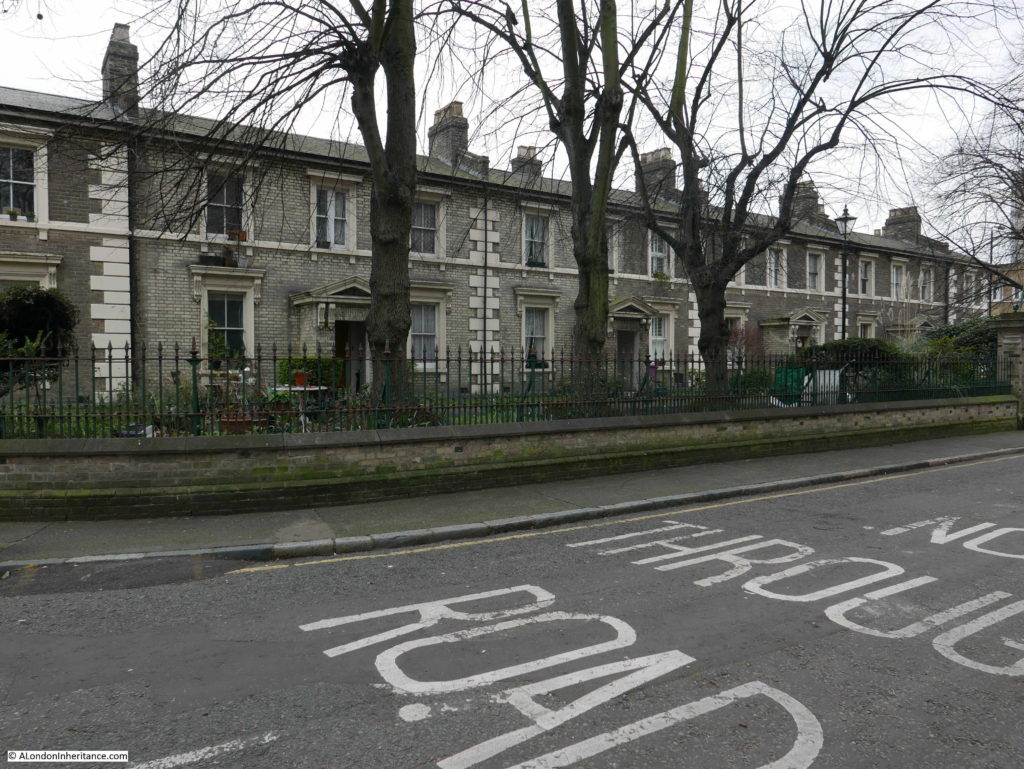 They are an example of the many houses built by the Worshipful Company of Mercers. The plaque at the top records the original build date of 1691 and the lower plaque records that they were rebuilt in 1856. 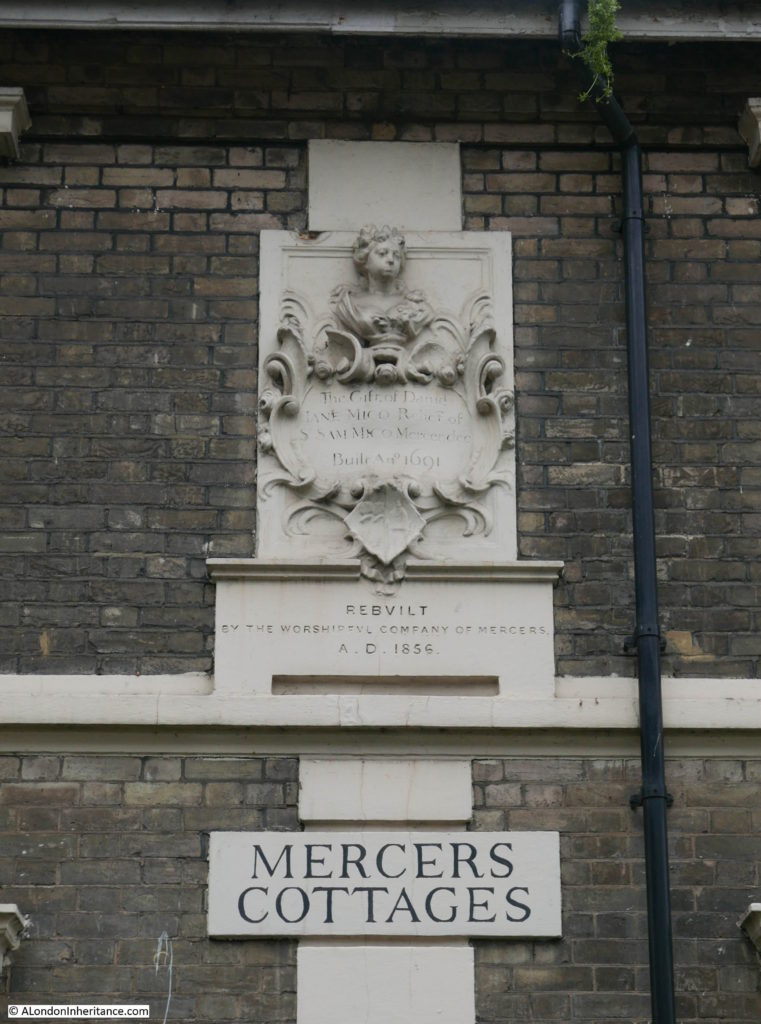 As I was standing in front of the houses taking the above photos, one of the residents left his house to walk to the road. He turned to talk to me, I was worried he was about to complain about me standing in front of his house, taking photos. Instead he smiled and said “lovely houses aren’t they” before hurrying on.

I can only agree, but I wonder if he realised that these were some of the first houses to be built around the church and that this little row of houses (before the 1856 rebuild) would be shown on the 1720 map: 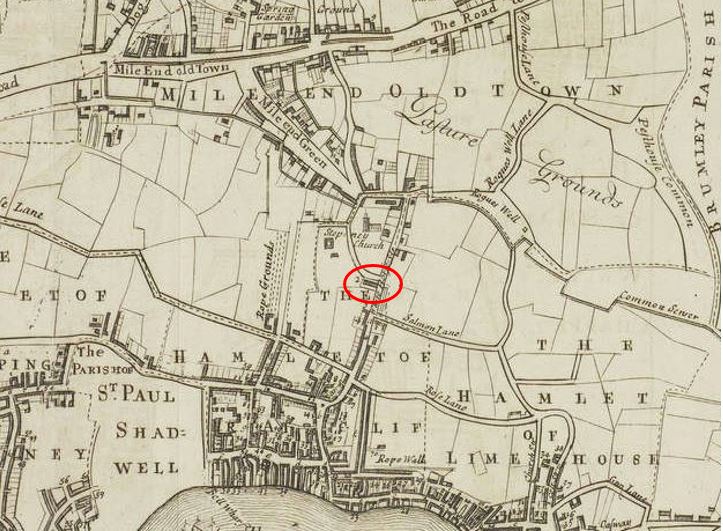 I will complete my Stepney walk, tracking down the sites listed in the 1973 Architects’ Journal, in a later post – but for now I am pleased to have explored one of East London’s oldest churches.

18 thoughts on “St. Dunstan And All Saints, Stepney”