I must have been going to the Cutty Sark pub in Greenwich for well over 45 years. I can just about remember the first trips, where as part of a family day out to Greenwich, after feeding the squirrels in the park, walking down to the Cutty Sark ship and the old Gypsy Moth IV, Francis Chichester’s boat in which he circumnavigated the world single handed in 1967, we would walk along the river to the Cutty Sark pub for a soft drink and crisps.

The walk along the river was different to that of today. It was much quieter and the industrial nature of the Greenwich Peninsula extended up to the Greenwich Power Station. My father would tell us stories along the way. Along the narrow walkway between the River Thames and the old Royal Naval College he would tell of people being robbed along here at night with the threat of being thrown in the river if they did not comply – no idea if these stories were true, or whether they were to keep the interest in a walk, but I could imagine this happening on a dark night with mist drifting across from the river.

To get to the Cutty Sark pub, it was a walk in front of the Royal Naval College, past the Trafalgar Tavern, Trinity Hospital and Power Station. There was then a short walk through a scrap metal yard to get to the pub.

A couple of months ago, I scanned some negatives and among the photos were some I had taken in Greenwich, including these photos which were probably taken in 1986 (plus or minus a year – I did not date these negatives, but judging by other photos on the same negative strips they are from this time).

The approach to the Cutty Sark pub was through a scrap metal yard. High walls of concrete panels held back large amounts of metal on either side of a narrow walkway: 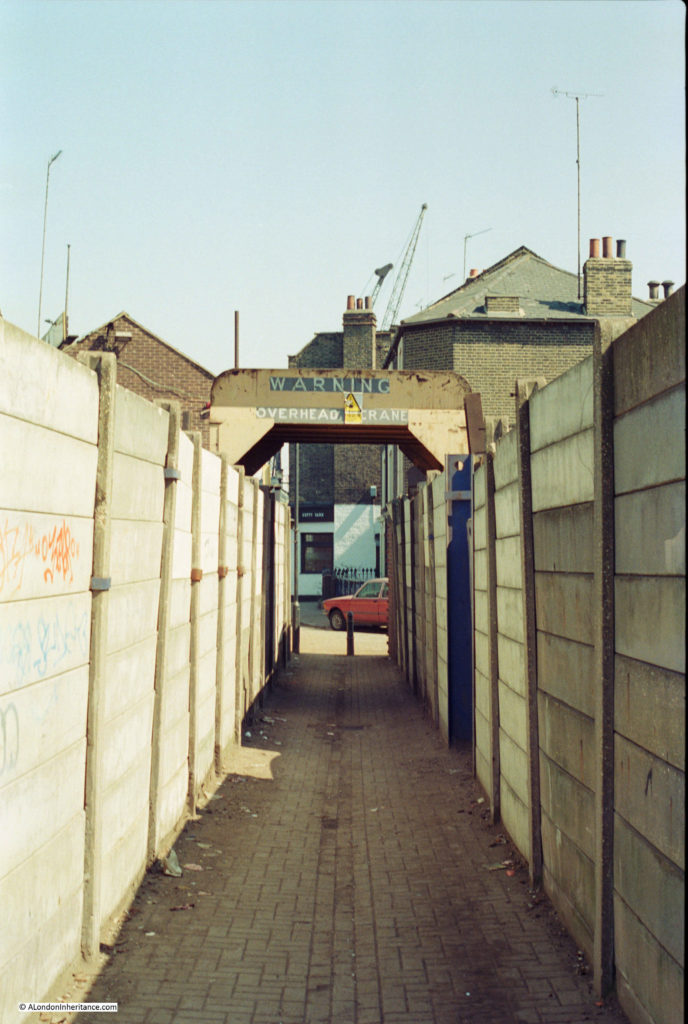 The scene today is so very different. As part of the de-industrialisation of the area, the scrap yard has been cleared, space opened up to the river on the left and flats built to the right. 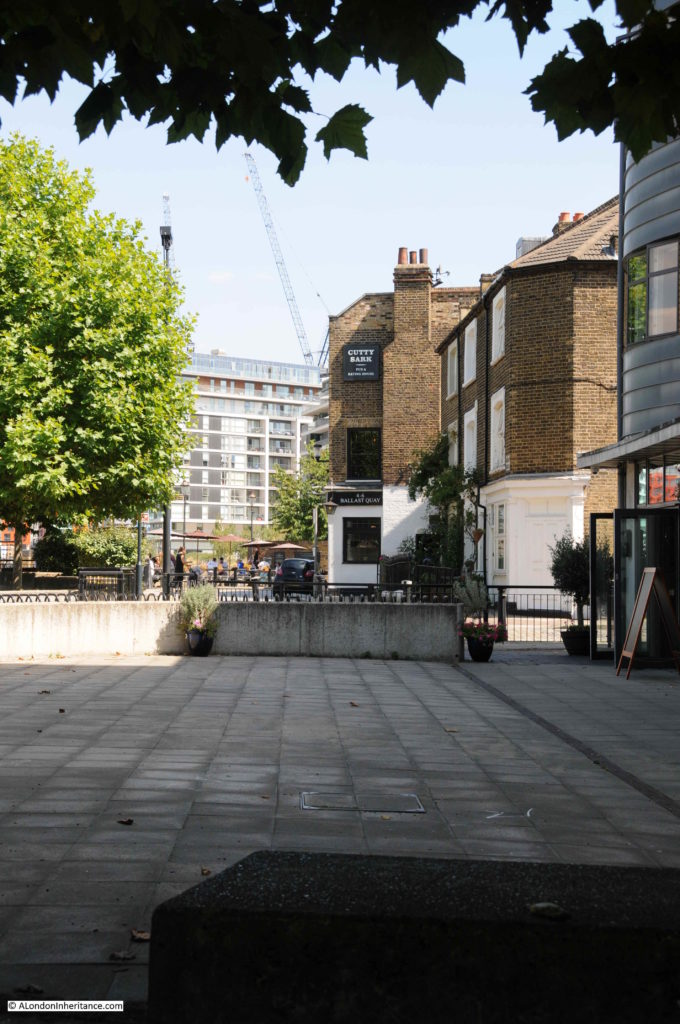 The Cutty Sark pub is in a superb location. An early 19th century building (although a pub had been on the site for many years prior to the current building), it looks out over the river, providing views to the east and west. We sat outside on a hot day in early August 2018 during the visit to take these photos, something I dream about doing again whilst writing this on a cold, grey and overcast January morning.

The current name of the pub is relatively recent, only being named the Cutty Sark in 1951 when the ship of the same name first arrived in Greenwich. Originally the pub was called the Green Man, then from 1810 it was named the Union Tavern.

After clearance of the scrap yard, the Cutty Sark pub now enjoys a large open space to the west along with a seating area directly in front of the pub. 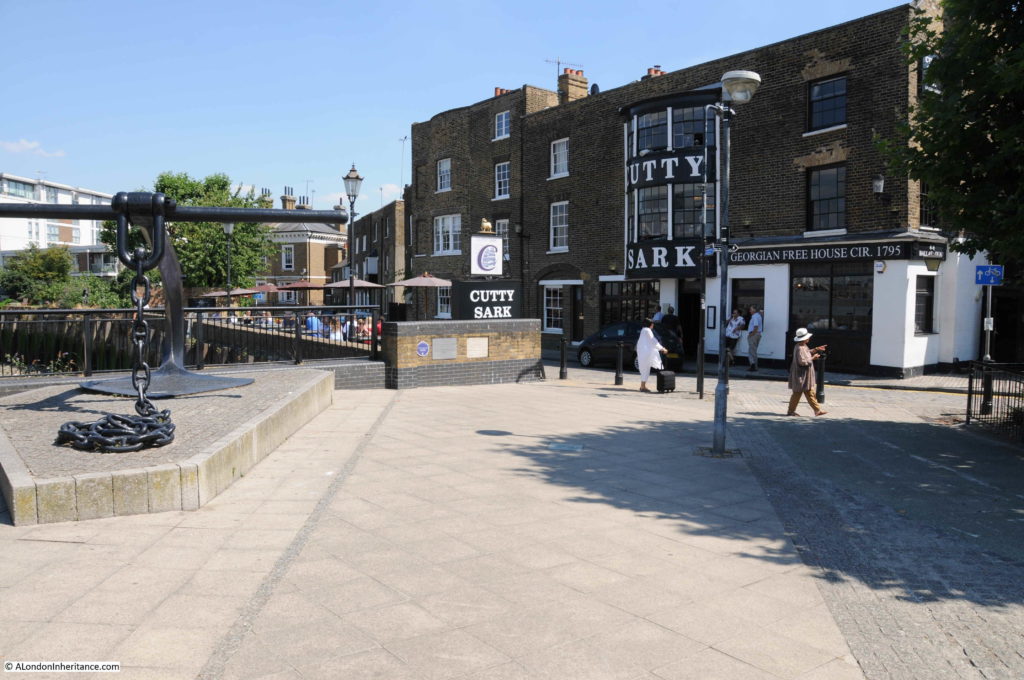 In the above photo there is a brick wall with three plaques, a close up photo provides some detail: 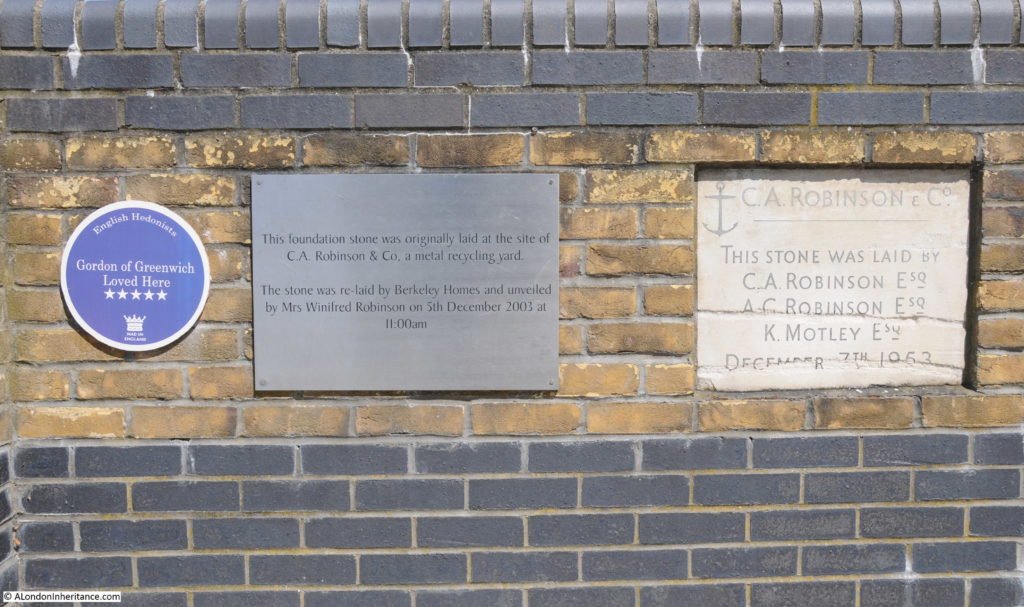 The middle plaque informs that the foundation stone on the right was from the old metal recycling yard that occupied the space.

I have not been able to find any information as to the blue plaque on the left, and who was “Gordon of Greenwich”, There are English Hedonists plaques in other parts of London, created as an artwork, but the Greenwich plaque does not appear to be included in lists of these other plaques.

The area around the Cutty Sark pub is an ideal point to view the river and the western edge of the Greenwich Peninsula. The closure of industry along this stretch of the river is almost complete and it is undergoing a similar transformation to much of the rest of the river, with blocks of flats being built, the first of these can be seen in my photo earlier in the post showing the view from where the scrap yard once stood, with a tall block of flats taking up the area behind and to the left of the Cutty Sark pub.

In 1986, this was the view along the Greenwich Peninsula: 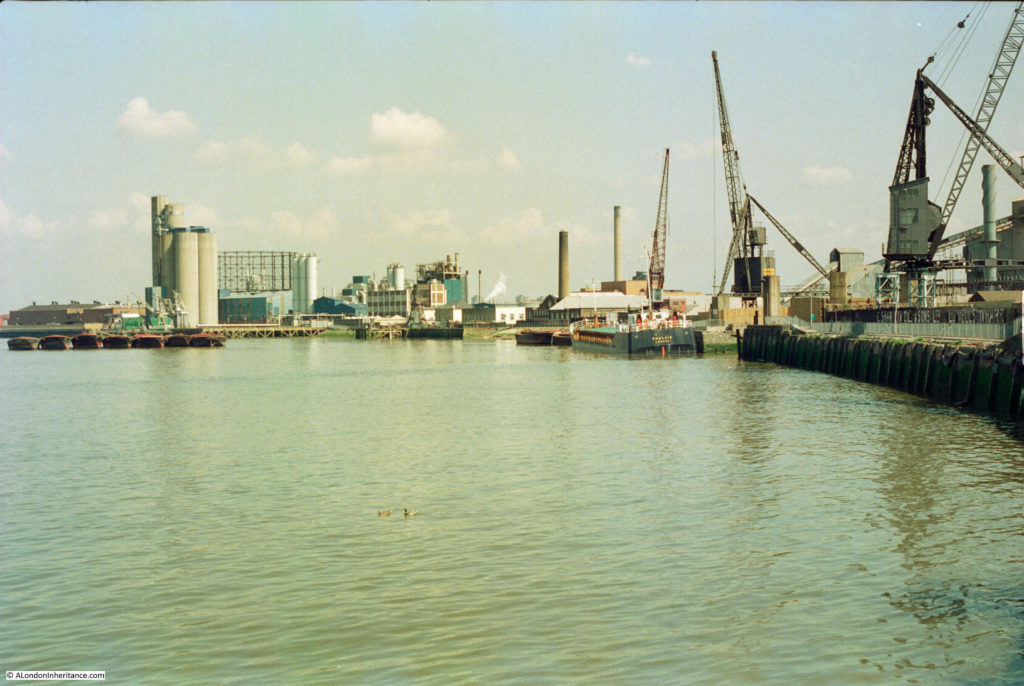 The same view today (I must get better at taking photos at the same state of the tide): 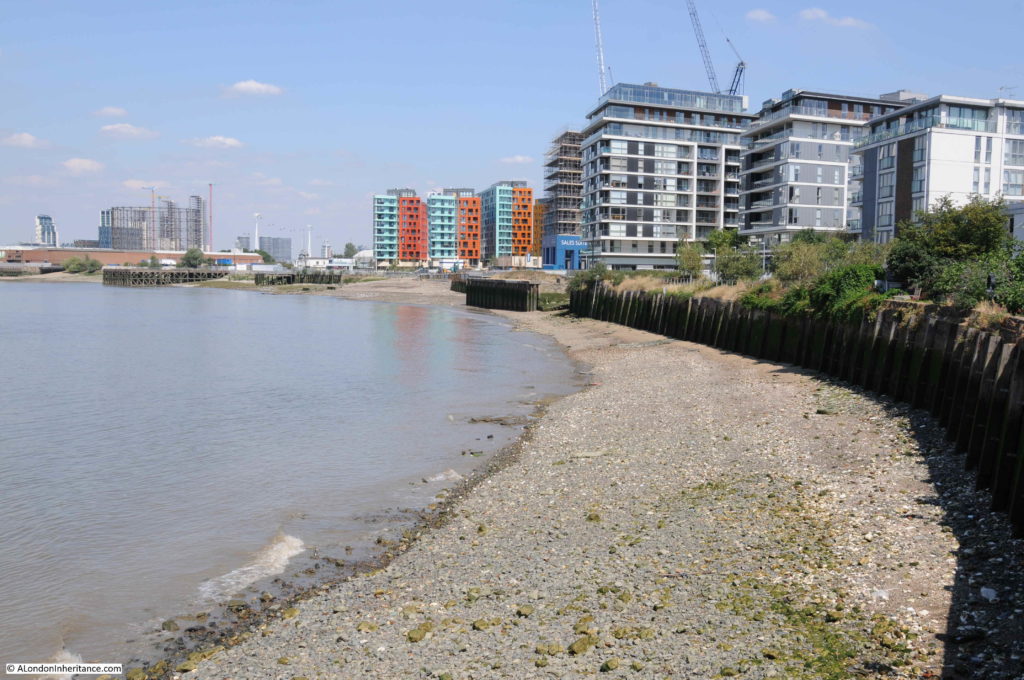 Apart from the curve of the river, the only recognisable feature in both photos is the gas holder further down the peninsula. This was originally one of a pair of gas holders, the largest of their type when constructed. One of the gas holders was demolished in 1986, fortunately one survives.

This photo from Britain from Above shows the pair of gasholders in 1924 and the surrounding industrial landscape. 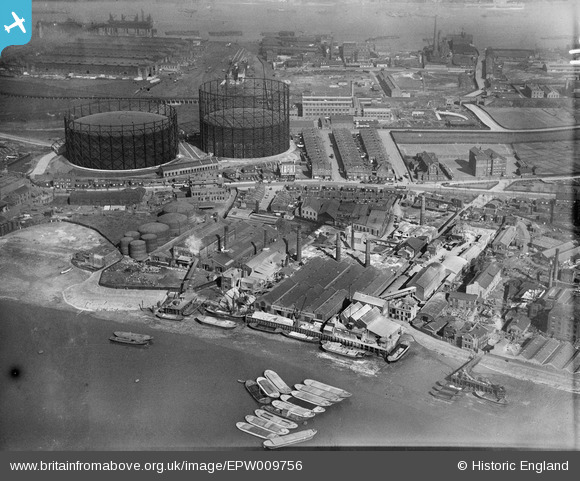 Two large concrete silos can also be seen, shown again in the following photo which was taken from the edge of the scrap yard. These were the storage silos of a sugar refinery which, as with much of British industry in the past few decades, went through a number of changes of ownership before being bought in 2007 by a French company and then being closed two years later, with demolition of the silos following soon after. 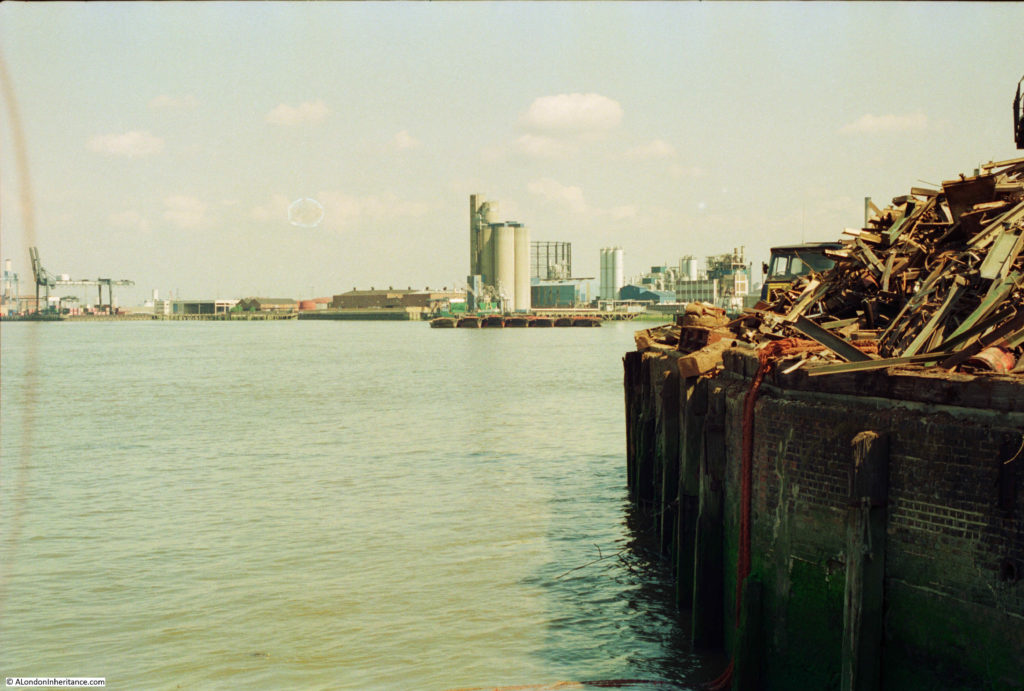 The following photo from 1986 shows a view across the full width of the River Thames. The large container cranes were part of the Victoria Deep Water Wharf. Behind these are two chimneys from the old Blackwall Power Station, commissioned in 1951 and closed thirty years later. 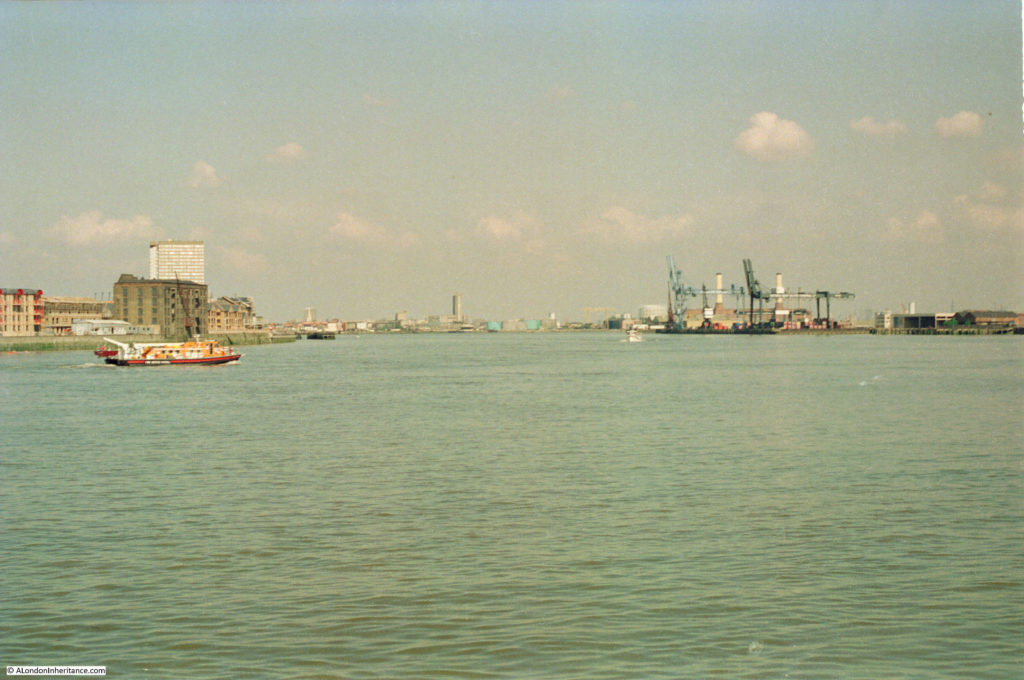 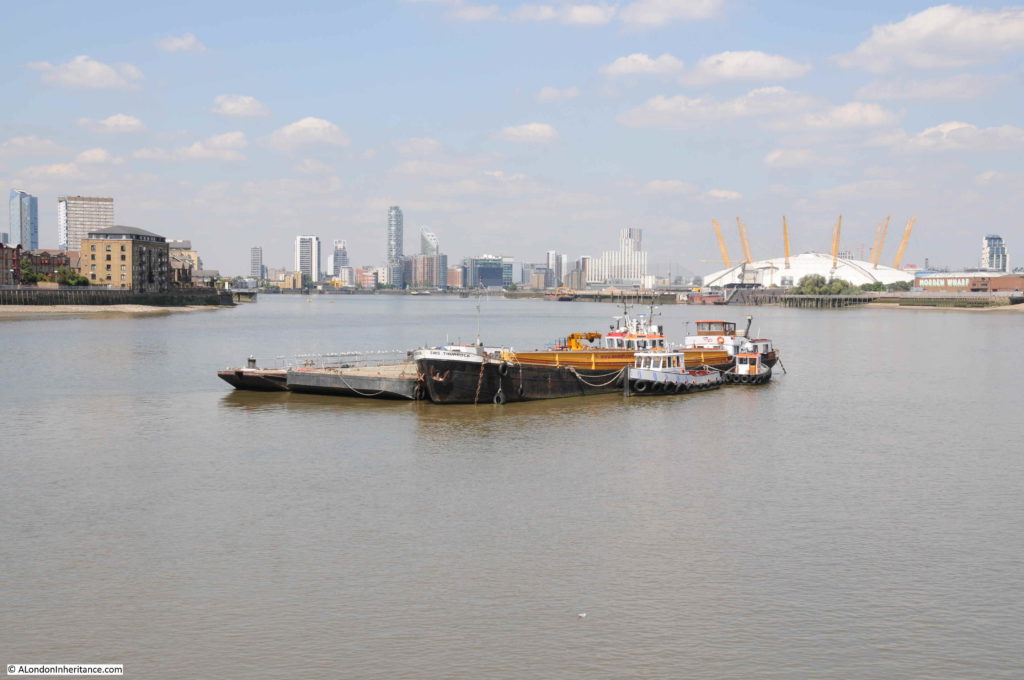 The only obvious surviving features are the old brick warehouse on the left (now flats) and the tower block behind.

There are a few remaining historical features buried within the photos. The following is an enlargement of one part of my 1986 photos. Part of the old sugar refinery is to the left, but look in front of this building and along the river edge is a triangular metal structure: 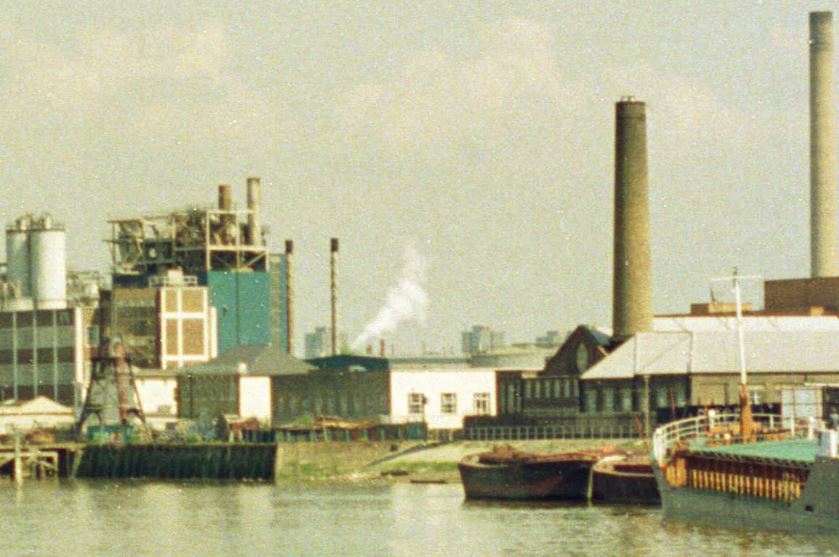 The following enlargement from one of my 2018 photos shows the same area today and whilst all the factory buildings have been demolished, the triangular metal structure, now painted grey, remains. 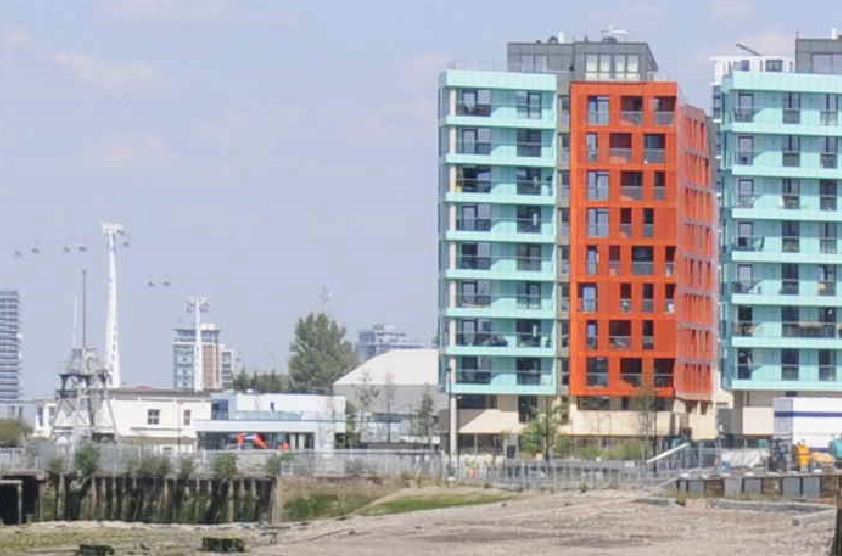 This is part of the winding equipment that allowed undersea telecommunications cables manufactured in the buildings to the right in the 1986 photo to be transported from the factory onto ships moored in the river.

This is Enderby Wharf and is where the first cable to cross the Atlantic was manufactured with  much of the world’s sub-sea communication cables being manufactured here until the mid 1970s.

The white building behind is Enderby House, built around 1830 and the only remaining building from the factory site.

Enderby Wharf was the site for a planned cruise liner terminal, however these plans have been abandoned following local campaigns against the terminal as the lack of shore power would have meant ships moored at the terminal would be generating their own electricity and therefore polluting the local area.

Although the cruise terminal has been abandoned, development of the Greenwich Peninsula continues and the river bank between the Cutty Sark pub and the O2 Dome will soon be an almost continuous line of flats.

In the depths of January, I am just looking forward to when the weather improves and provides the opportunity to sit outside the Cutty Sark on a warm sunny day, with a beer and taking in the views of the river.