On a Sunday morning in 1947, my father is taking photos along the south bank of the River Thames, in the region of Tower Bridge.

I have already covered Pickle Herring Street in a previous post, and for this week, we have walked under Tower Bridge, a short distance along Shad Thames to the area around Horselydown Old Stairs. If we look to the left, just before reaching the stairs, there is a man sitting on a low stool and painting a view that must have been painted, drawn and photographed many thousands of times since Tower Bridge was completed. 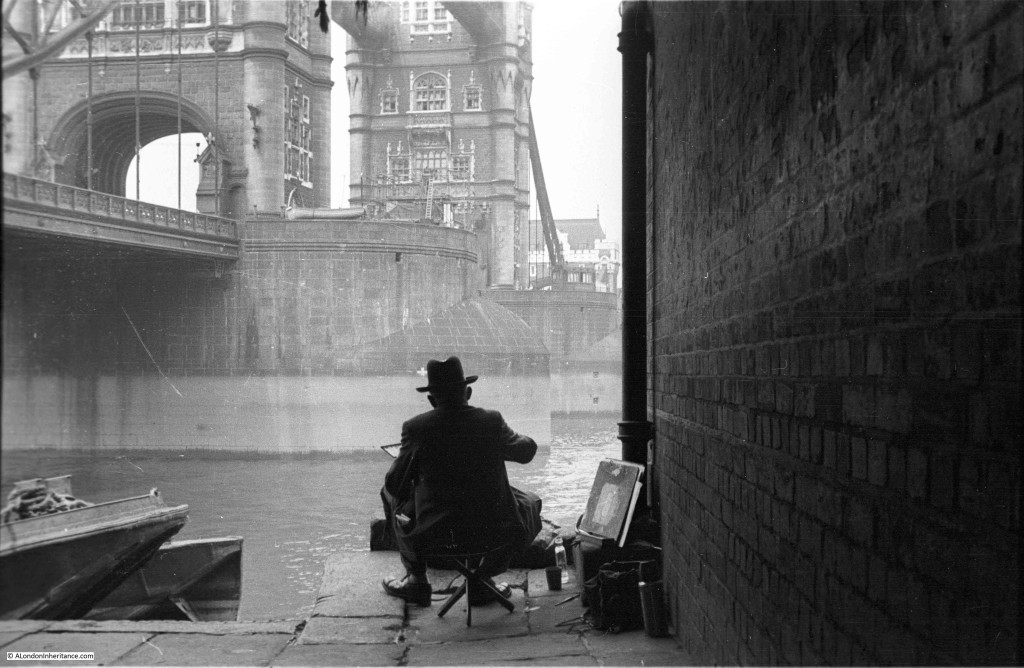 The site is adjacent to the old Anchor Brewery building and finding the spot was easy, however where the artist sat in 1947 is now blocked by a wall that obscures the view to Tower Bridge and the river.

My 2015 photo is below. My father’s photo was taken from much closer to the wall, however if I took the same position most of the view is obscured by the wall, but it is close enough.

The Anchor Brewery building was restored in the late 1980s so I assume it was then that this new wall was built and when the brickwork on the right was cleaned. 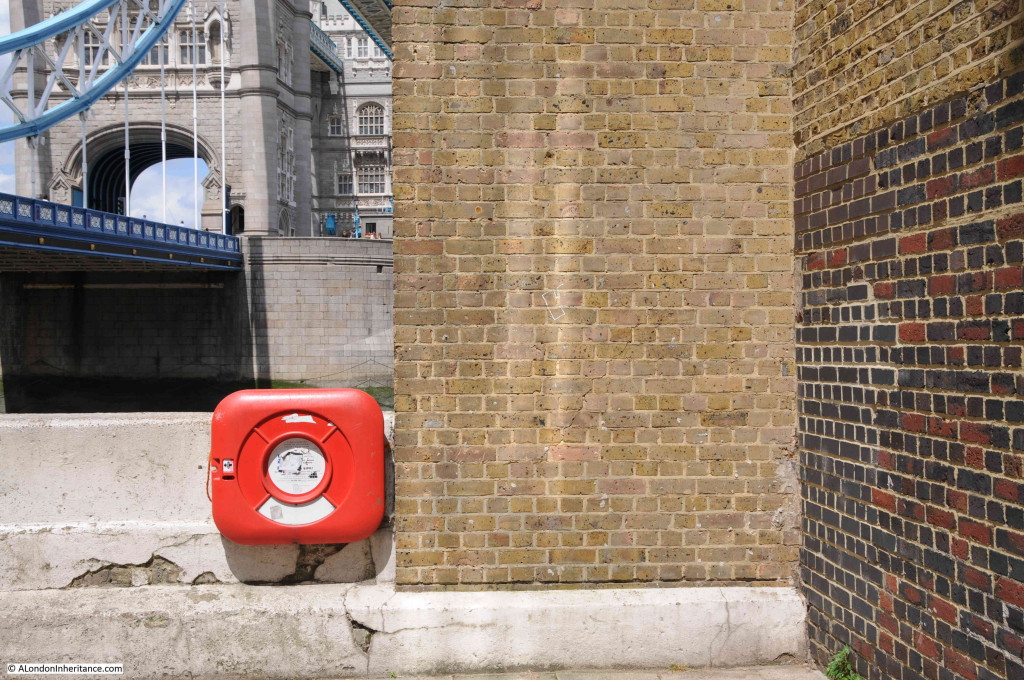 Horselydown Old Stairs are just to the right of the brick wall and are one of the oldest remaining stairs providing access to the river along the Thames.

If you look just to the right of Tower Bridge on the southern bank of the Thames in the following map from the 1940 Bartholomew Atlas of London, the position of Horselydown Old Stairs is clearly marked. 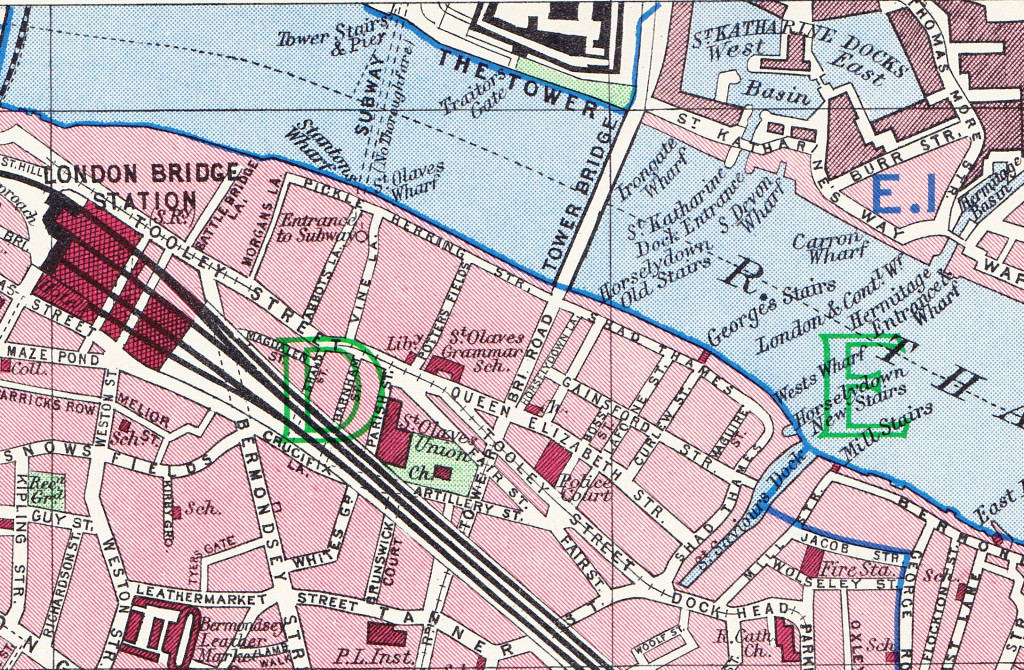 To show the antiquity of these stairs,  John Rocque’s survey of London from 1746 shows the same area long before Tower Bridge was built, but still shows Horselydown Old Stairs in the same position (underlined in red). 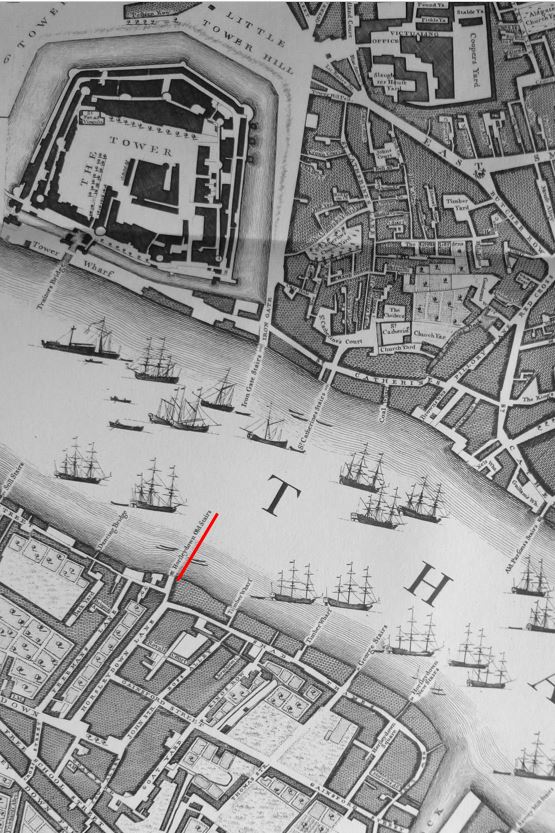 When the Thames was a working river, there were many stairs providing access to the river along both the north and south banks. Roque’s map demonstrates how many there were in this short stretch of the Thames. The map also illustrates the amount of shipping along the Thames and the stairs were used by those who worked the river and took smaller boats out to the larger moored ships etc.

Horselydown Old Stairs are one of the few that remain to provide full access from street level down to the river.

Horselydown was the area roughly from Tooley Street, down to the river and along to St. Saviours Dock. The name Horselydown is from “the district of Horsey-down, Horsa-down or Horsley-down, so called from its having been used by the inhabitants as a grazing field for their horses and cattle”.

Two Horselydown stairs were close to the two ends of the area on the river. Follow the bank of the Thames east from Horselydown Old Stairs and we find two Timber Wharf’s, George Stairs and finally Horselydown New Stairs. The above 1940 map extract shows the boundaries of Horselydown well with Tooley Street to the south, Horselydown is the area up to the river.

The fact that there is an old and new stairs in 1746 hints at the antiquity of the old stairs. Indeed Edward Walford’s Old and New London states that “from the corner of Bermondsey Street to Horselydown was formerly called Horselydown Lane; and here, on the west side of Stoney Lane; which was once a Roman road leading to the trajectus, or ferry over the river to the Tower.” Perhaps in the area of the stairs?

Note also that there is a difference in spelling between the 1940 and 1746 maps. In 1746 the spelling is Horsleydown with the spelling of Horselydown used in 1940 (just a swap of position for the l and e).

Horselydown makes an appearance in Ralph Agas map of London published around 1591. The fenced off area close to the river were originally the manor house, mill and brew house of the prior of the Hospital of St. John of Jerusalem. also known as the Liberty of St. John of Jerusalem. In the reign of Edward 1st, this consisted of three water-mills, three acres of land, one acre of meadow, and twenty acres of pasture. 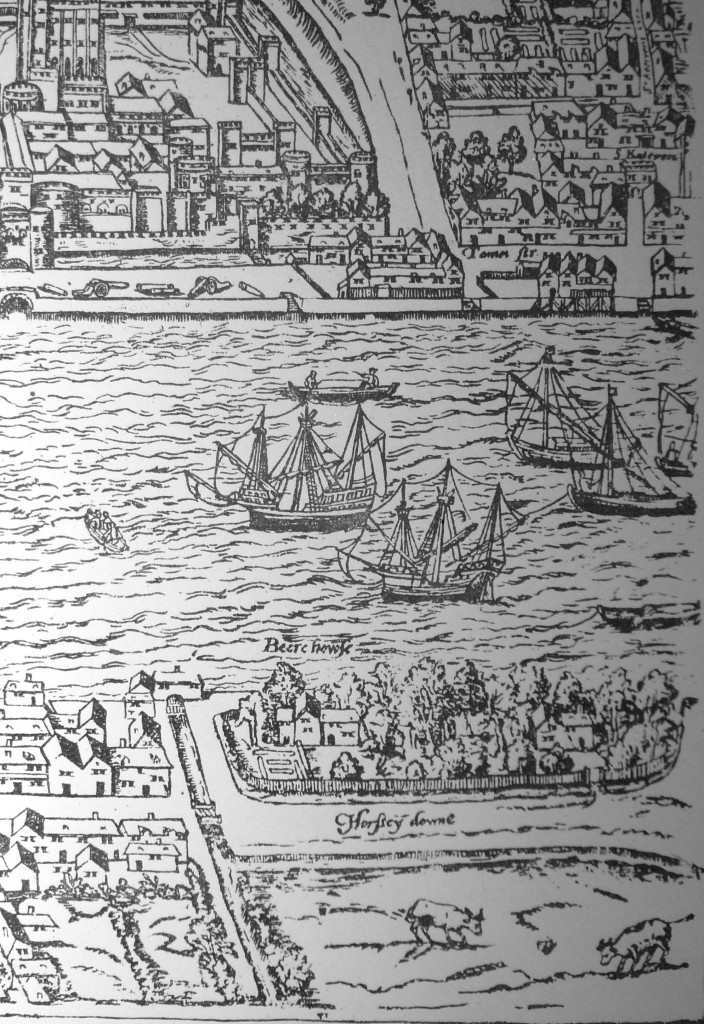 A view of a fete at Horselydown in 1590 from Walter Besant’s Tudor London: 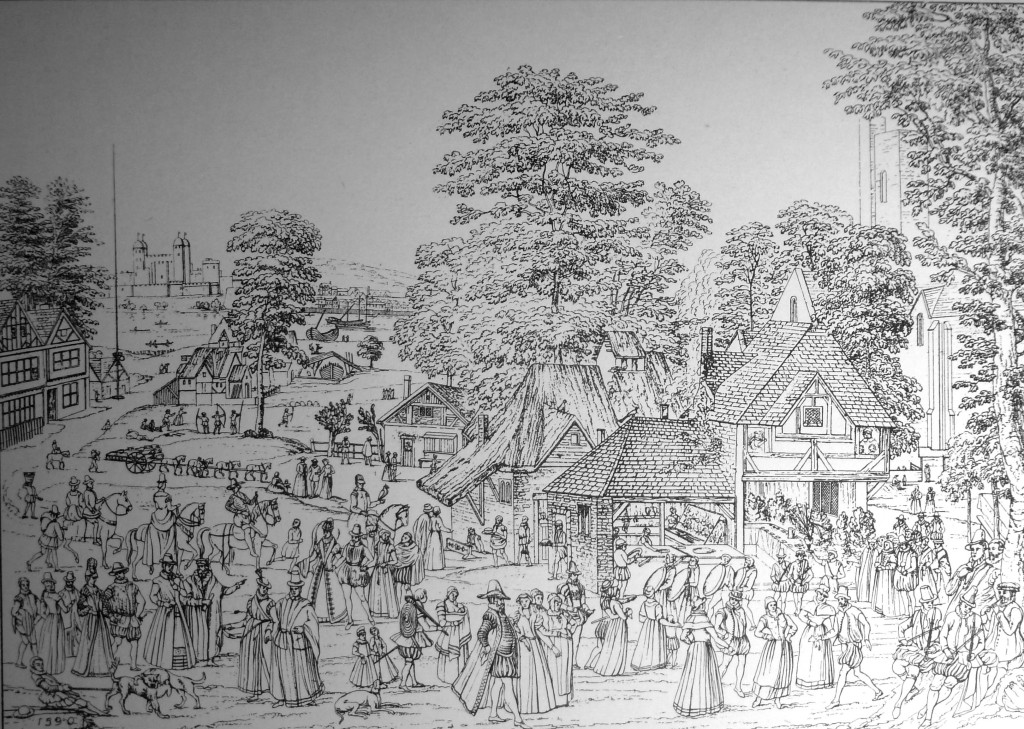 The stars are entered through the old Anchor Brewery building, and drop straight down to the river. Fortunately the tide was out during my visit so I could get down to the foreshore. 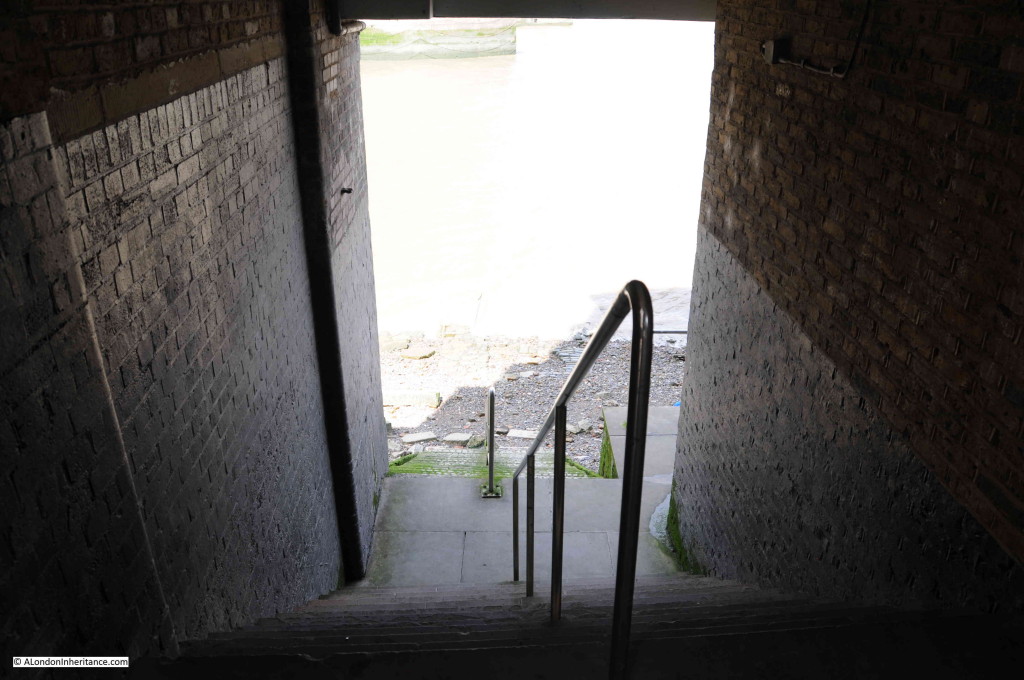 The lower level of the stairs run out from the building down to the foreshore. Note the remains of the paved surface leading from the bottom of the stairs out into the river. 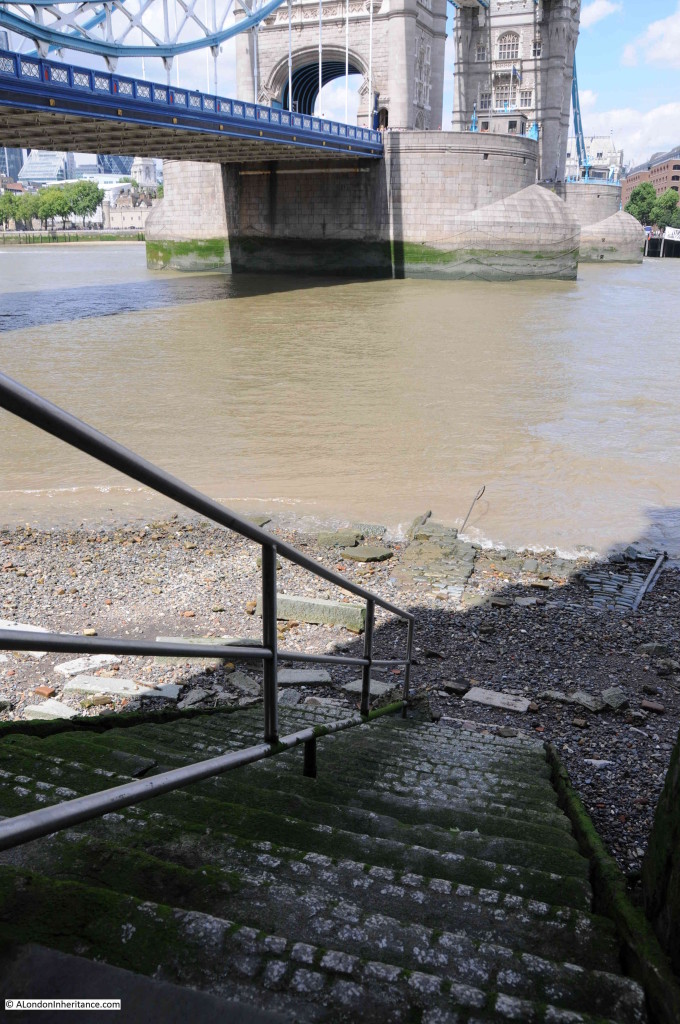 My father took the same route in 1947 and from the steps took the following photo.

Tower bridge has opened to allow a ship to pass. Part of the Tower of London can just be seen to the left of the bridge and to the right is the General Steam Navigation Company (GSN). 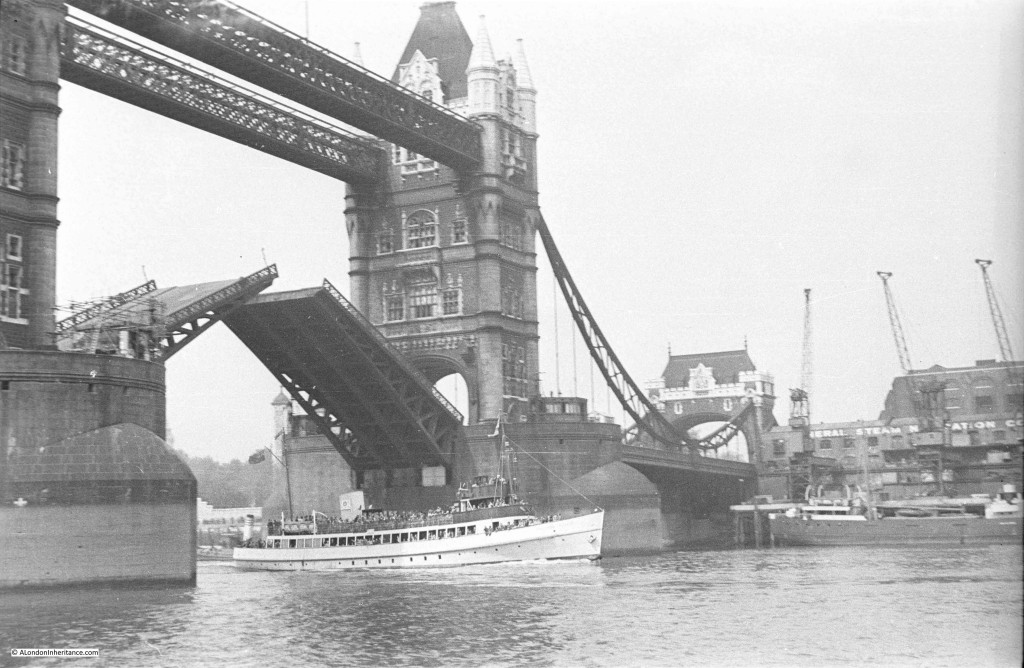 The General Steam Navigation Company was formed in 1821 by a group of London businessmen and the name came into use in 1824 when a joint stock company was formed. GSN was active in trade around the UK coast and to the near European coast. It also ran a pleasure ship business taking Londoners down river to locations such as Southend, Clacton and Margate.

After the first world war the company was taken over by P&O and ran almost as an independent business, but after the second world war, trade and pleasure shipping was changing rapidly. GSN was integrated into the cross-channel ferry business, the pleasure sailings closed and the name finally disappeared in the early 1970s when GSN was fully integrated into P&O.

A close up of the ship passing underneath Tower Bridge. It is full of passengers, perhaps taking a Sunday excursion to Greenwich or perhaps more likely as far down the Thames as Southend or Margate.

My 2015 photo from Horseleydown Old Stairs. Unfortunately I did not have the same luck with the bridge opening. The site of the General Steam Navigation Company is now occupied by the Tower Hotel. 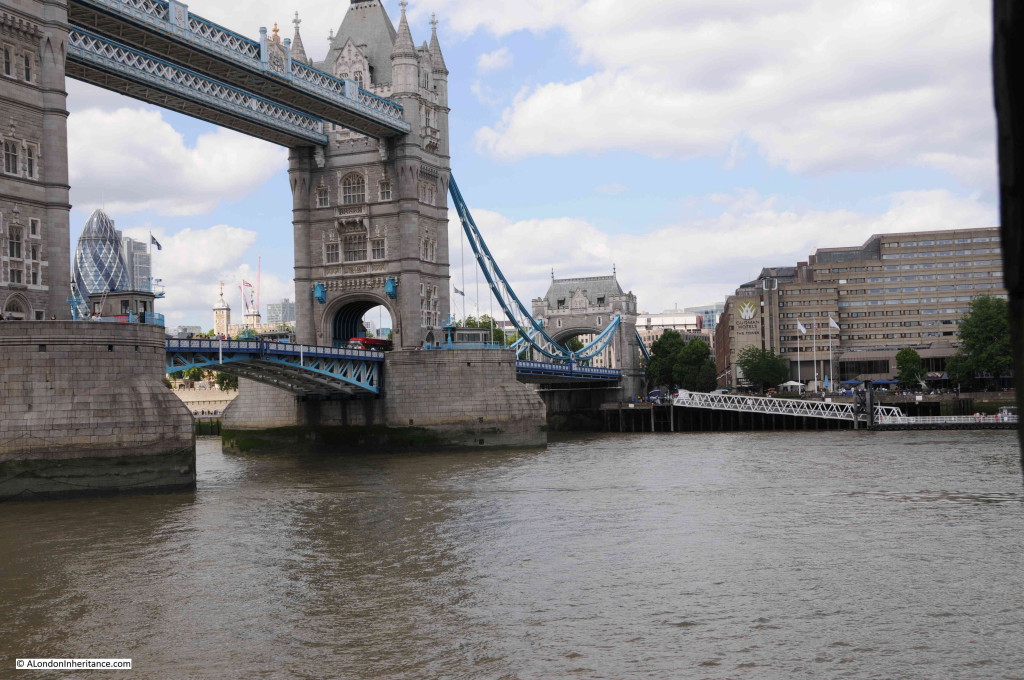 The foreshore at Horselydown Old Stairs is a great place to view Tower Bridge and the river. I also find it fascinating to leave behind the “redeveloped streets” that now run along much of the south bank of the Thames and look at the mass of old bricks and stone work on the foreshore, probably from the many old buildings that once lined the Thames and that are now being slowly eroded by the continuous cycle of tides.

I walked down Horselydown Old Stairs on a busy Saturday afternoon from a very busy Shad Thames, however for the 20 minutes I was on the foreshore there was only one other group of 4 people who came down to admire the view of the bridge and river.

In 1947 the foreshore was also very quiet. This photo looking underneath the bridge to the City has only two other people. A woman by the water’s edge and a man just by the barge.

Note the cranes on the left. These ran along the warehouses that faced onto Pickle Herring Street. 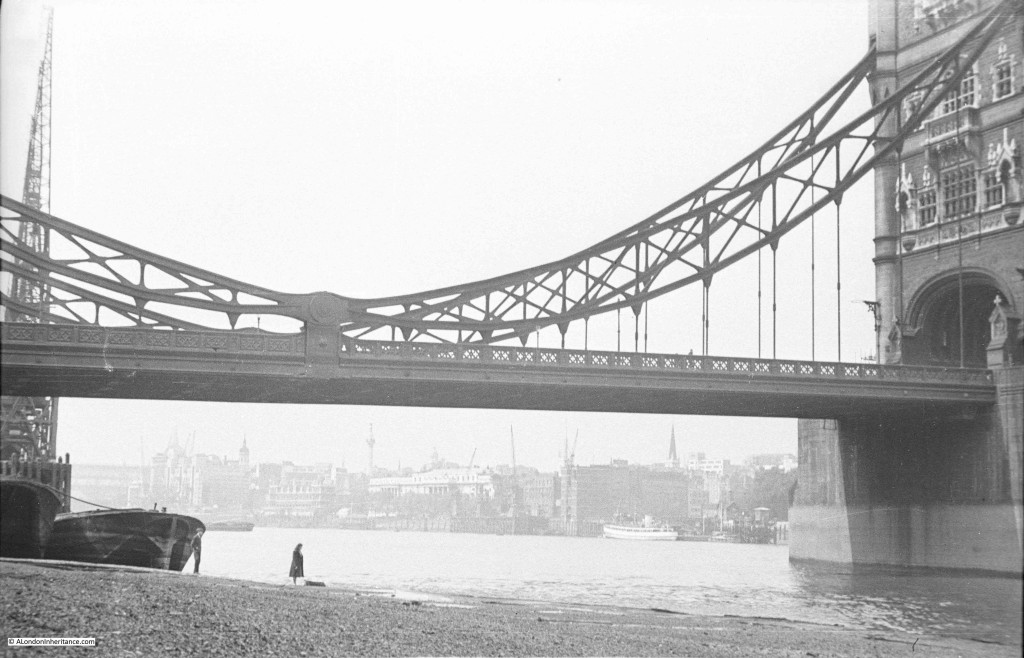 The tide is further out in my father’s photo and you can see in front of the barge the raised edge of the paved section running down to the river.

Looking at the same view in 2015 (although I should have been a bit further back): 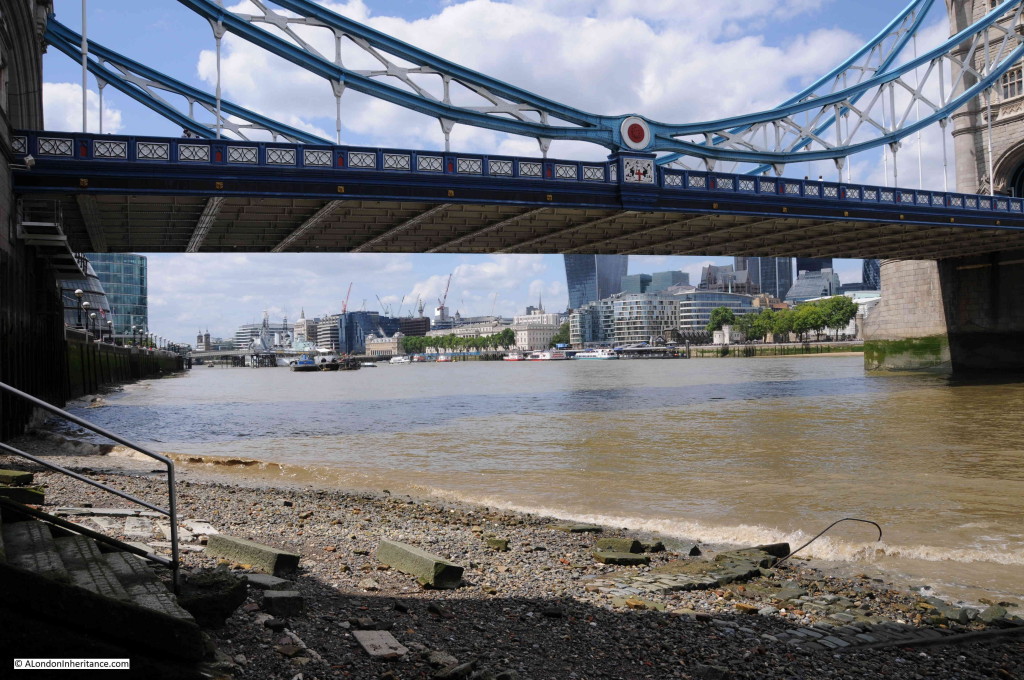 Looking down at the remains of the paved walkway down into the Thames. 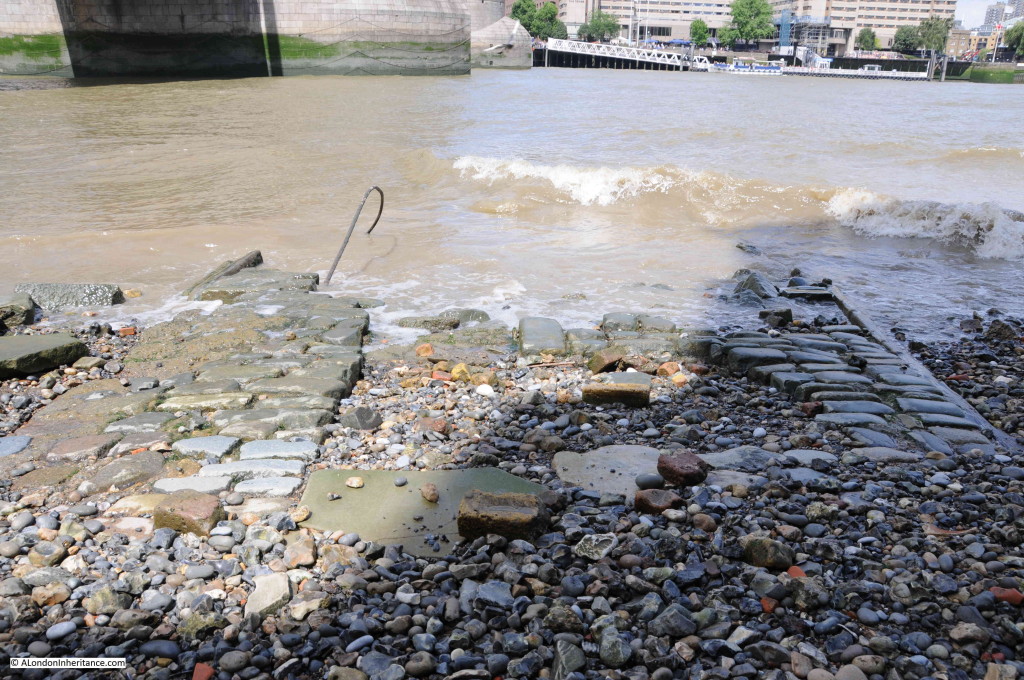 And back up to the stairs leading through the old Anchor Brewery. The green algae shows the height of the tides. 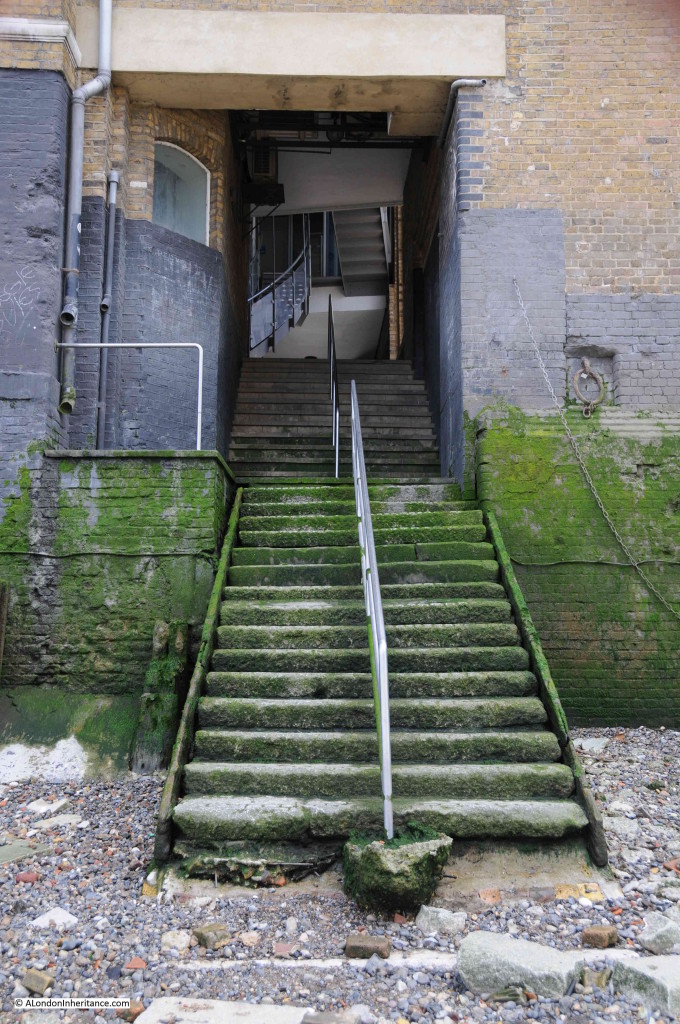 At the top of the stairs I found “Rehan’s painting spot” chalked on the wall. No idea who Rehan may be, but I was pleased to find a link back to the artist in my father’s 1947 photo. 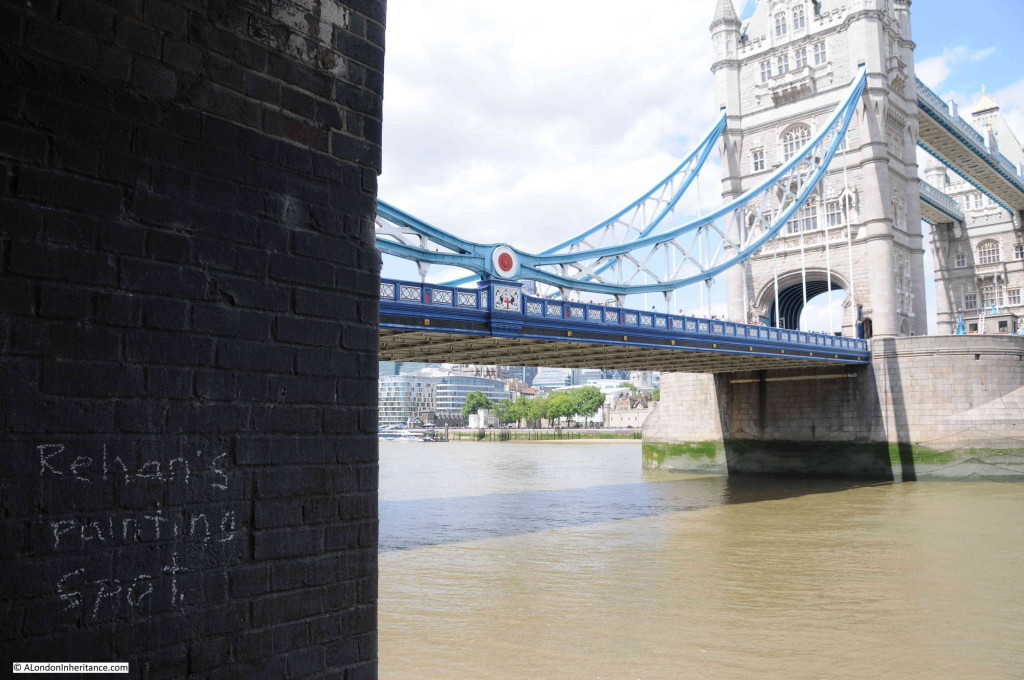 I walked across Tower Bridge and along the north bank of the river to look at the old Anchor Brewery building and the stairs. The following photo shows the brewery from the position of the General Steam Navigation Company and shows the stairs to the lower right. The wall which I assume was built as part of the redevelopment of this area can be seen as a small 3 tiered wall up against the right hand wall of the brewery. It is clearly not original as it does not have any of the architectural features of the main building. The 1947 artist was sitting at the base of this wall. 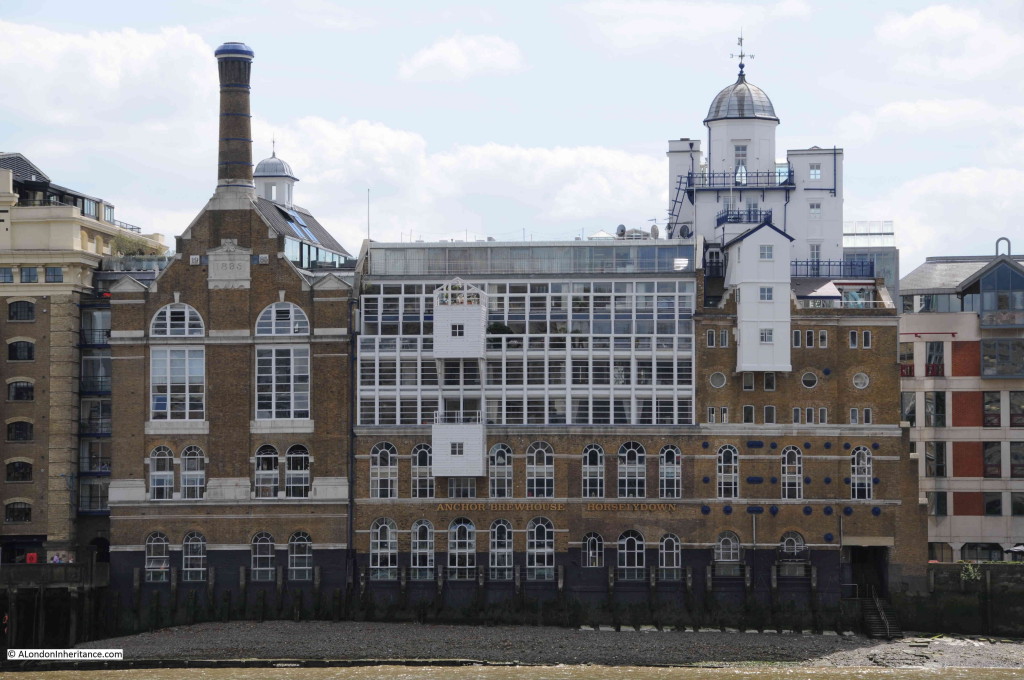 A close up view of the stairs. Fascinating to consider how many people have taken these stairs over the centuries to cross the Thames or to reach shipping on the river. 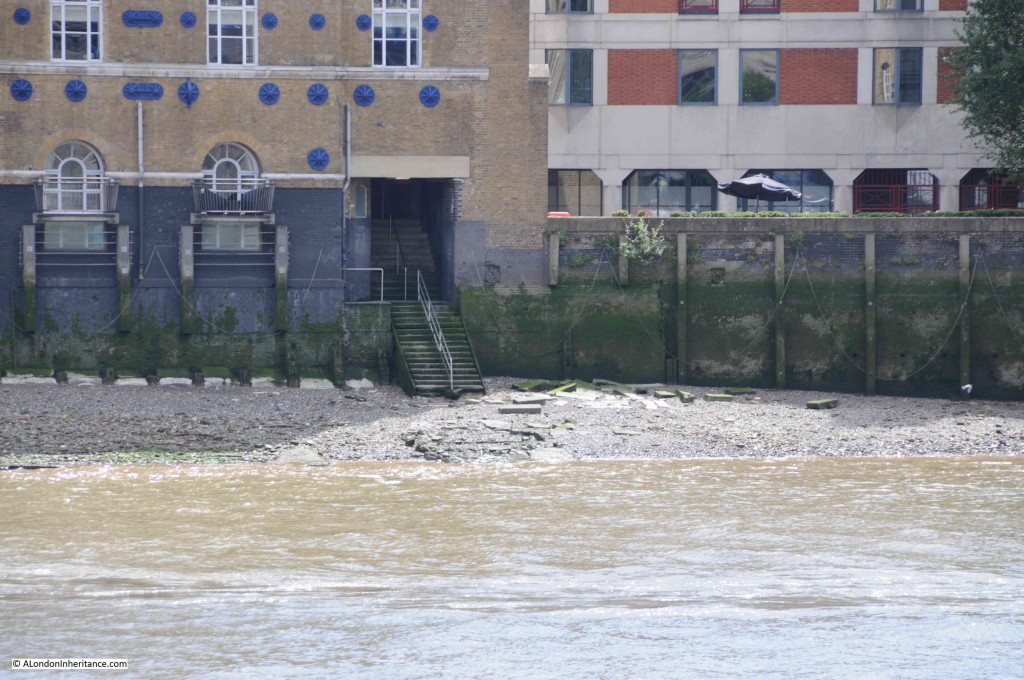 I went looking for the location of the artist and the stairs leading down to the Thames foreshore, but found Horselydown. There is much more to this area than I can cover in a weekly post and delving into the history of these areas also shows me how much I still have to learn of this fascinating city.