I usually try to get in a couple of evening walks in that quiet period just after Christmas and before the main return to work at the start of January. This year, part of one of these walks crossed the River Thames using the Golden Jubilee walkways alongside Hungerford Bridge. I wanted to photograph the same scenes as 35 years ago in 1985, and to have a look at what has changed. Although the formal name of the crossing is the Golden Jubilee Bridge, I have called the post the view from Hungerford Bridge, as this was the original 1985 walkway and seems to be the most used name for the crossing.

This was the view in 1985, looking south across the river towards the Royal Festival Hall. 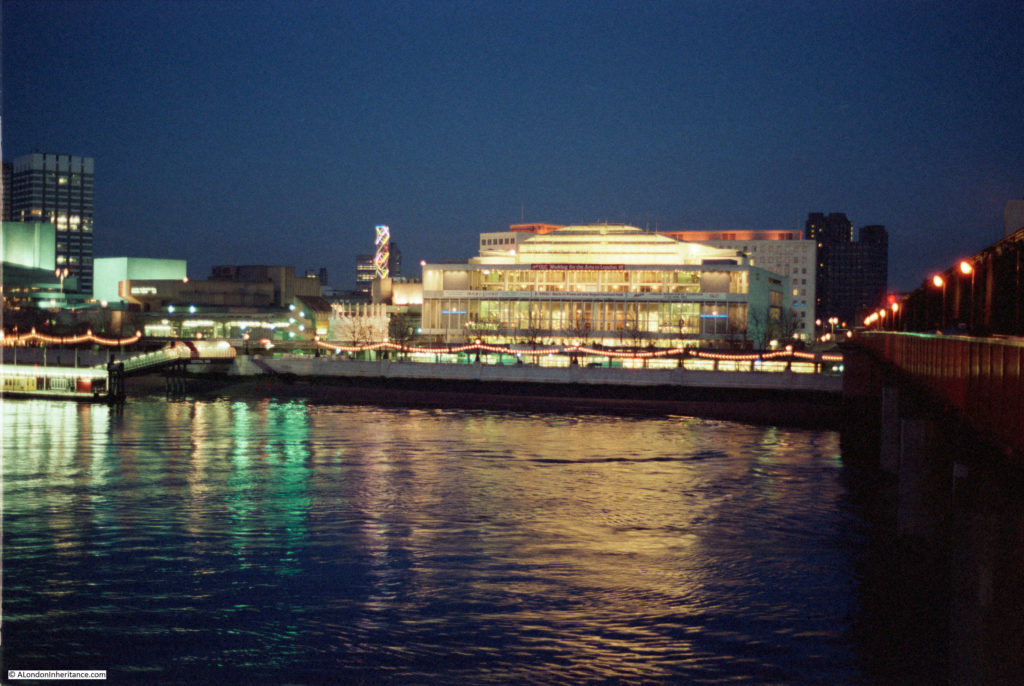 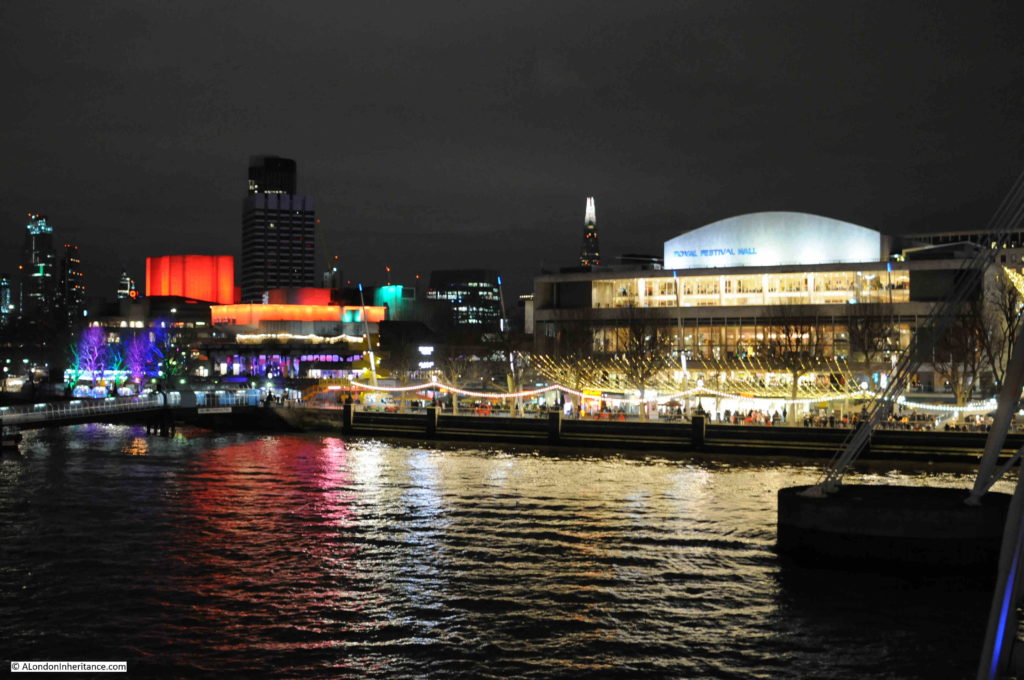 The viewpoint is slightly different, as seen by the different location of the tall office block on the left, however the area around the Royal Festival Hall is still an illuminated focal point on the South Bank.

The 1985 photo does include a feature that was a focal point of the South Bank. To the left of the Royal Festival Hall was a tall, illuminated lattice structure. The coloured lights were continuously changing.

I was working on the South Bank for much of the 1980s, and these ever changing lights were always in the background when working or walking in the area after dark. I moved abroad for a few years at the end of the decade, and cannot remember when these lights disappeared. It is these subtle changes that are so easy to miss.

The following photo shows a detailed section from the original 1985 photo, which includes the lights, and also another unique feature from the 1980s. 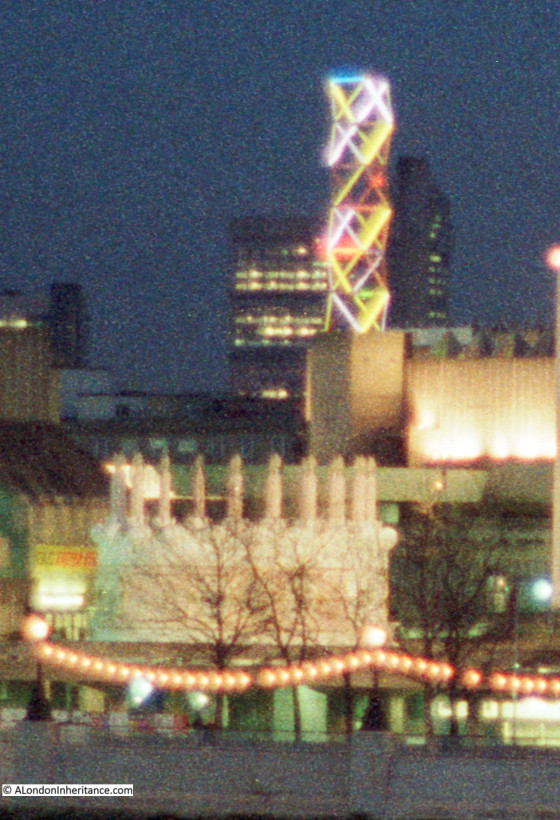 This can be seen in the 1985 photo above, and also in the extract, which does give an indication of the size of the cake, and how incongruous a traditionally decorated birthday cake looked against the concrete architecture of the South Bank.

The following photo is from the original postcard which shows the cake close up. 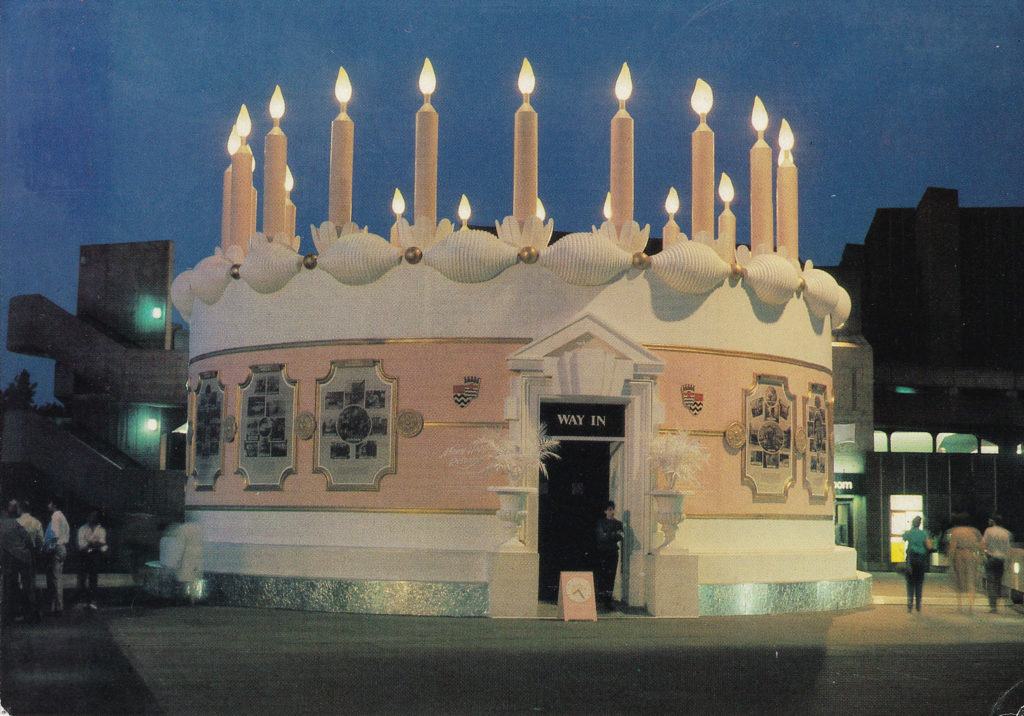 The red banner requests “Keep GLC Working for the Arts in London”. The mid 1980s was a time of conflict between the Thatcher led Conservative Government and the Labour majority Greater London Council led by Ken Livingstone.

This resulted in the 1985 Local Government Act which dissolved the GLC in 1986. Campaigns by the GLC could not influence the majority of the Conservative Government, and at the time there were serious concerns about future funding of South Bank complex. Probably one of the reasons why now the majority of the exterior ground level of the Royal Festival Hall is occupied by commercial businesses.

In the centre of the hall, there is a banner advertising that “EROS: Back in Town at the Royal Festival Hall”. I had completely forgotten about this, but in the 1980s the statue on the top of the Shaftesbury Memorial Fountain in Piccadilly Circus (so I assume technically correct to state Eros, which is frequently applied to the whole fountain), had been removed for restoration.

Prior to the return of the statue to Piccadilly Circus in 1985, it was displayed for a short period in the Royal Festival Hall.

The banner on the right advertises the “Mars London Marathon Exhibition” in advance of the marathon which took place in April of that year. Perhaps strange now that a health focused event would be sponsored by a brand such as Mars, but at the time (and for many years previously), the energy giving benefits of glucose were a major advertising feature of Mars bars.

The following 1985 photo again shows the GLC cake, and also the Festival Pier. 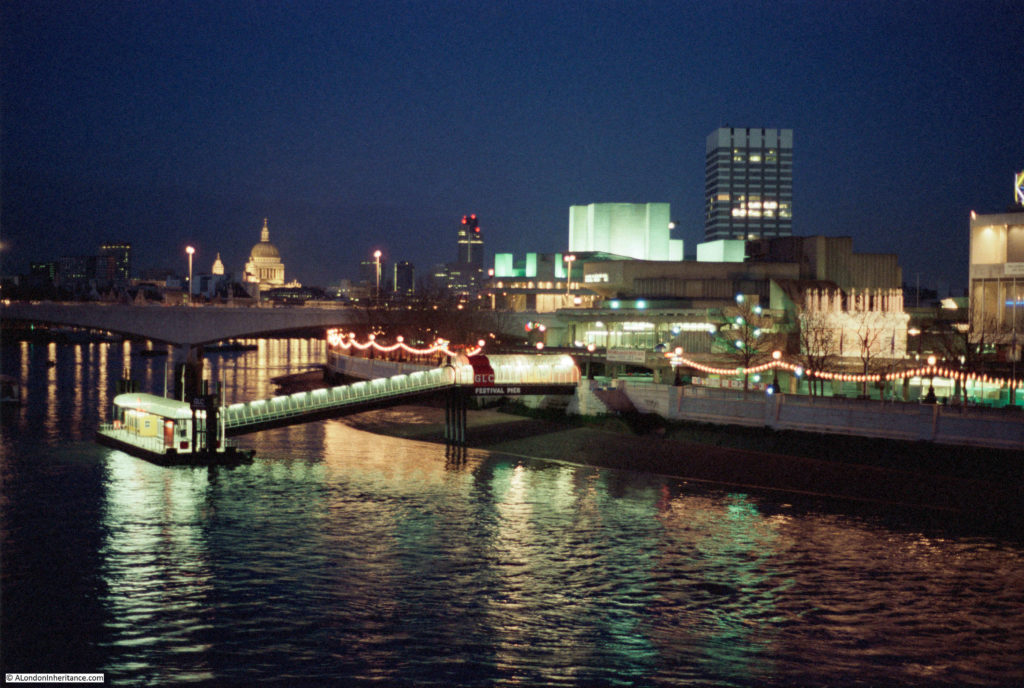 The same view from a slightly different angle, as to the right, the Kings Reach Tower office block now appears from behind the square office block of what was London Weekend Television. 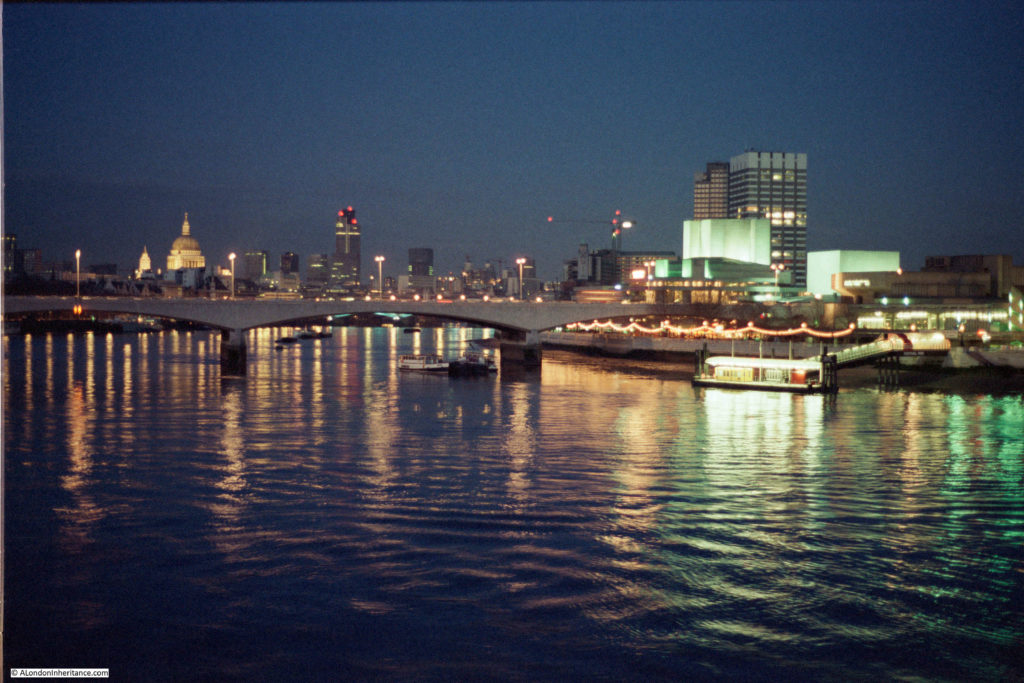 A similar view in 2020 is shown in the photo below. The Kings Reach Tower building is now much taller having had several floors added during conversion of the block from offices to apartments.  The future of the old London Weekend Television building (known after the closure of London Weekend Television as the London Studios and operated by ITV) is not clear. ITV moved out of the complex a few years ago, originally intending to return to refurbished studios, but they now uses studios at the redeveloped BBC Television Centre site in White City. I am sure that this high value location on the South Bank will become yet more expensive apartments. 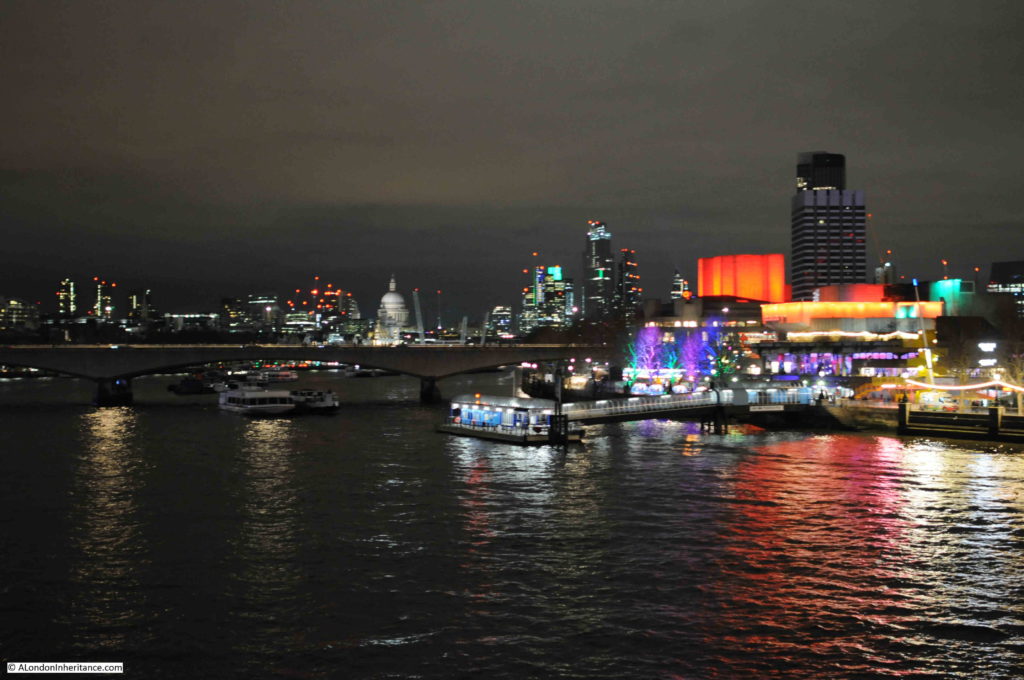 The following 1985 photo is looking along the river towards Waterloo Bridge, St Paul’s Cathedral and the City of London. 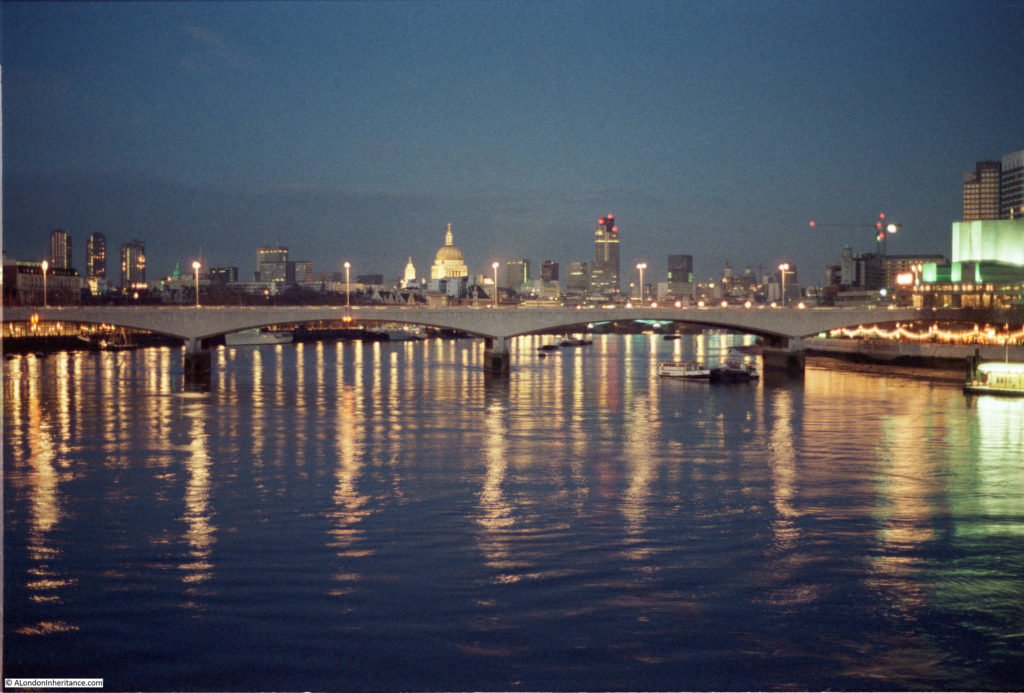 In the above photo, the cathedral stands clear, as does the old Nat West Tower to the right. This building, now called Tower 42, was the tallest building in the City.

The same view today is shown in the following photo. The Nat West Tower is now dwarfed and almost lost by the City developments of the last few decades. 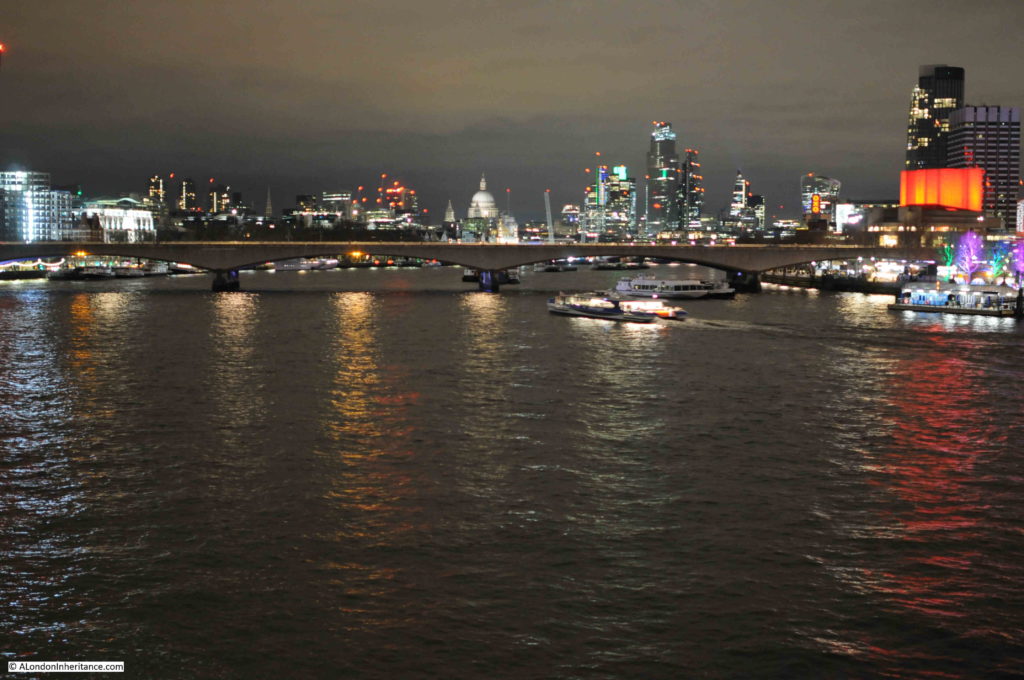 The following 1985 view is of the north bank of the river from the Hungerford Bridge walkway. The brightly lit building is the wonderful 1931, Grade II listed, Shell-Mex House, occupied at the time by Shell UK.  The building is now known as 80 Strand. To the left is the Adelphi building, and the Savoy on the right. 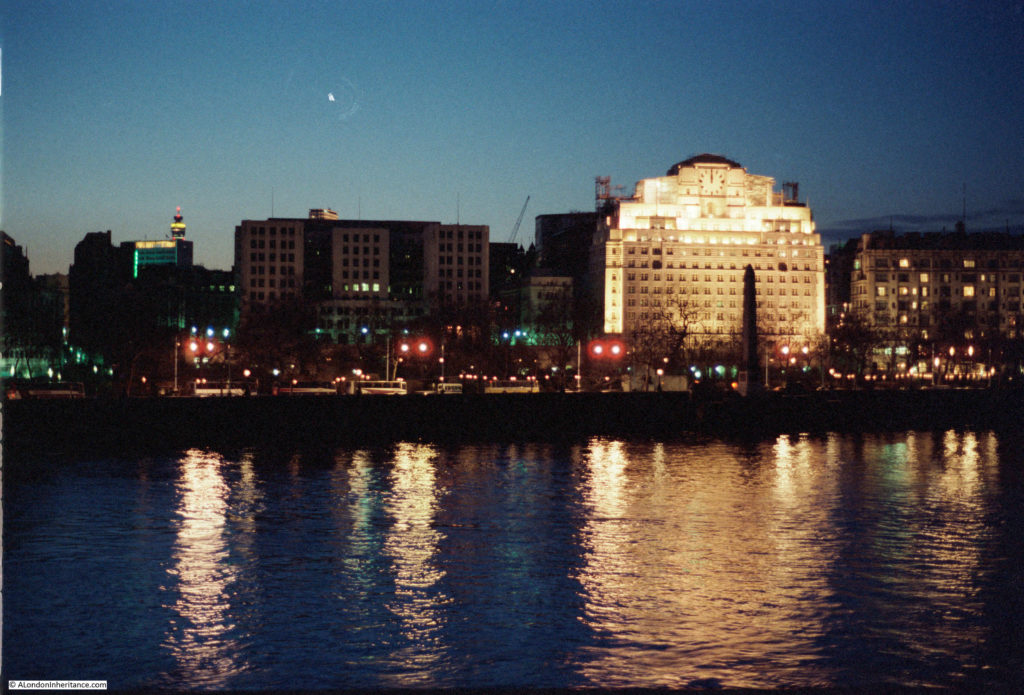 The same view today, although a bit later in the evening so a somewhat darker sky. The front of the Shell-Mex building is covered in sheeting as part of an ongoing refurbishment. 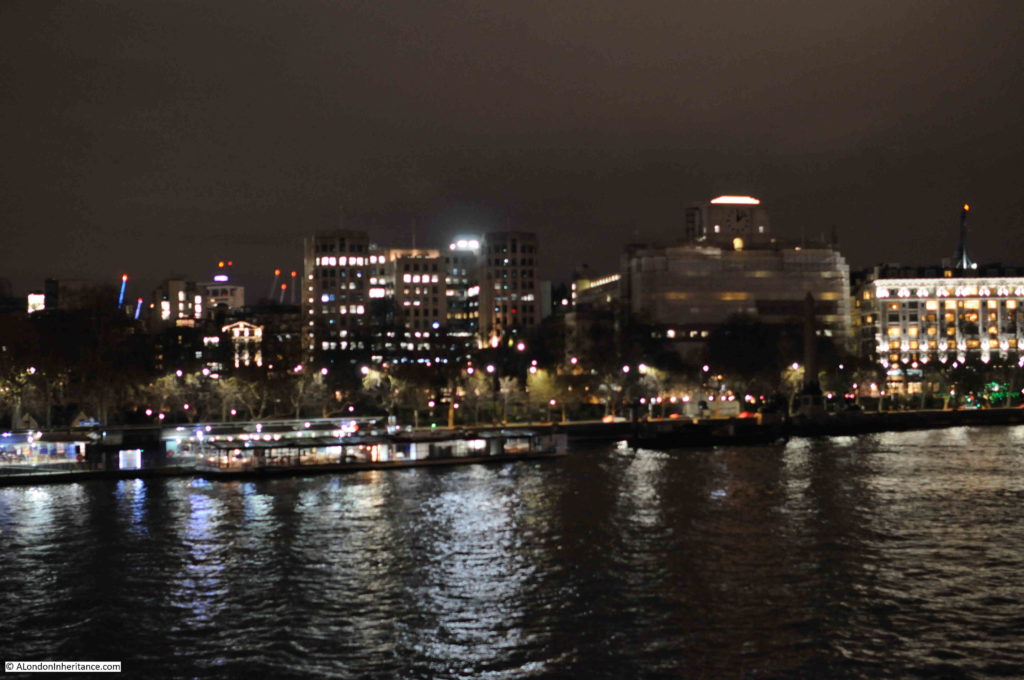 Walking along the walkway towards the north bank, and this was the 1985 view from Hungerford Bridge looking towards the Embankment. 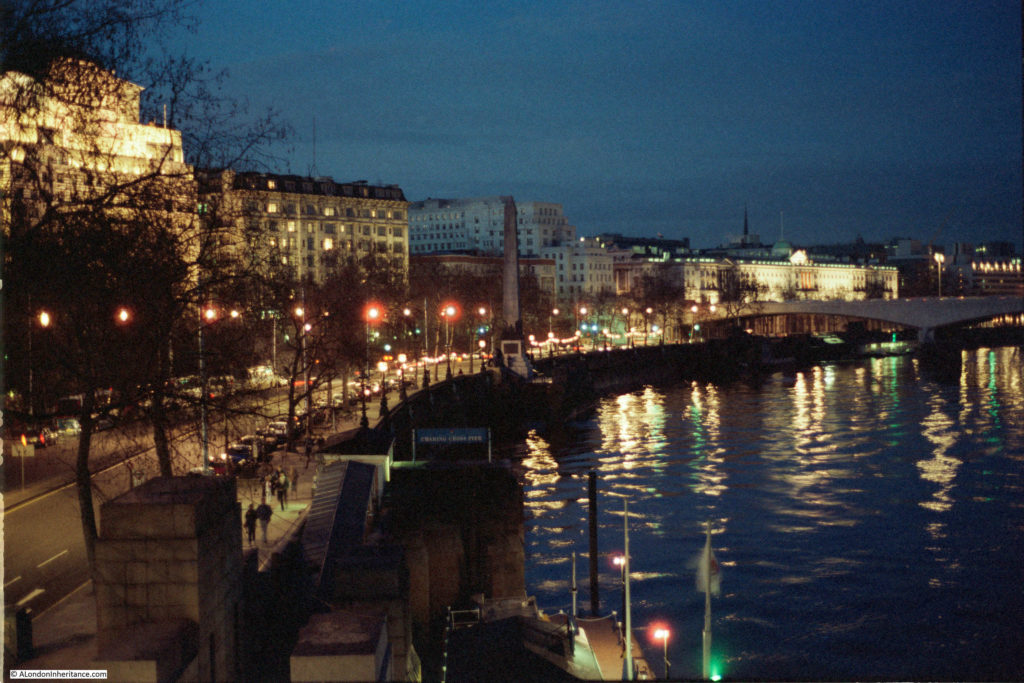 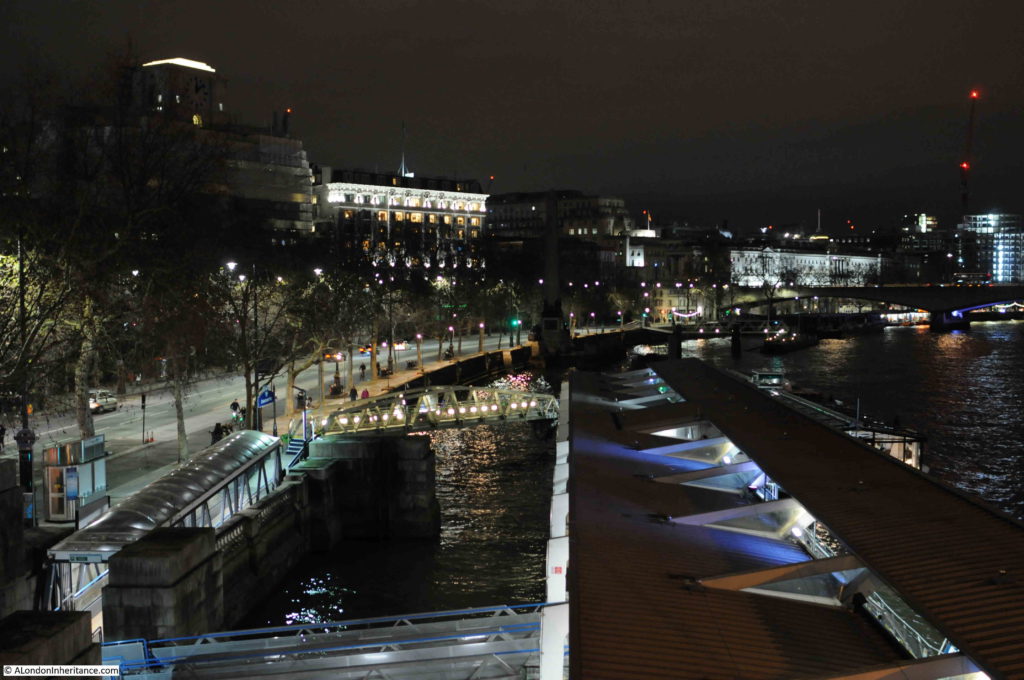 The Embankment is much the same, however the main change is the scale of the Embankment Pier. This is a relatively small feature in the 1985 photo, which has since been replaced by a much larger pier by the 2020 photo. This is indicative of the considerable growth in passenger transport along the Thames in the 35 years since 1985, when river piers were mainly used for tourist focused cruises of the river. The opening of the Thames Clipper Service in 1999 has contributed significantly to passenger traffic on the river, with the resulting upgrades and additions of river piers to support this traffic.

The main change between 1985 and 2020 has been the bridge across the river from which the photos were taken.

In 1985 there was only a single walkway on the side of the bridge looking towards the City. It was a narrow walkway, frequently covered in large puddles of water, and from experience, not somewhere that you would really want to walk across late at night. 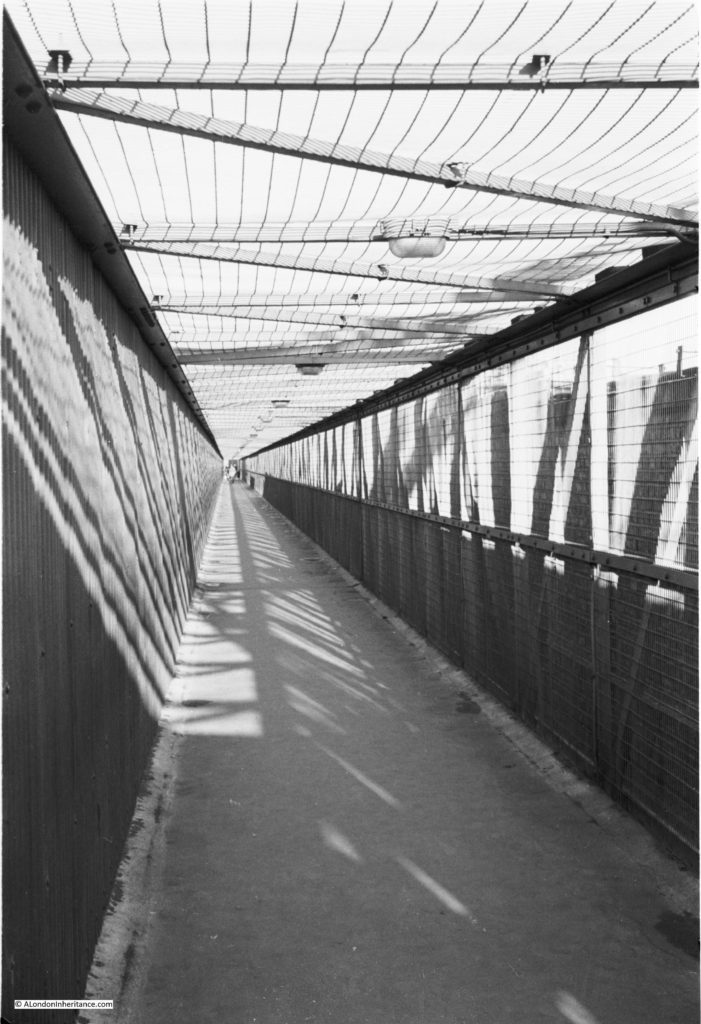 Today, there is a walkway on either side of Hungerford Bridge. Officially named the Golden Jubilee Bridge, these new walkways were completed in 2002 and provide a considerably improved walking route between the north and south banks of the River Thames.

With the growth of attractions and events along the South Bank, the number of people walking across the bridges has grown considerably. According to the website of the architects Lifschutz Davidson Sandilands, who with engineering company WSP, won the competition for the bridges, they are the busiest walking routes across the river in London, with 8.4 million pedestrians in 2014.

The following photo is the view south along the walkway, towards the Royal Festival Hall. 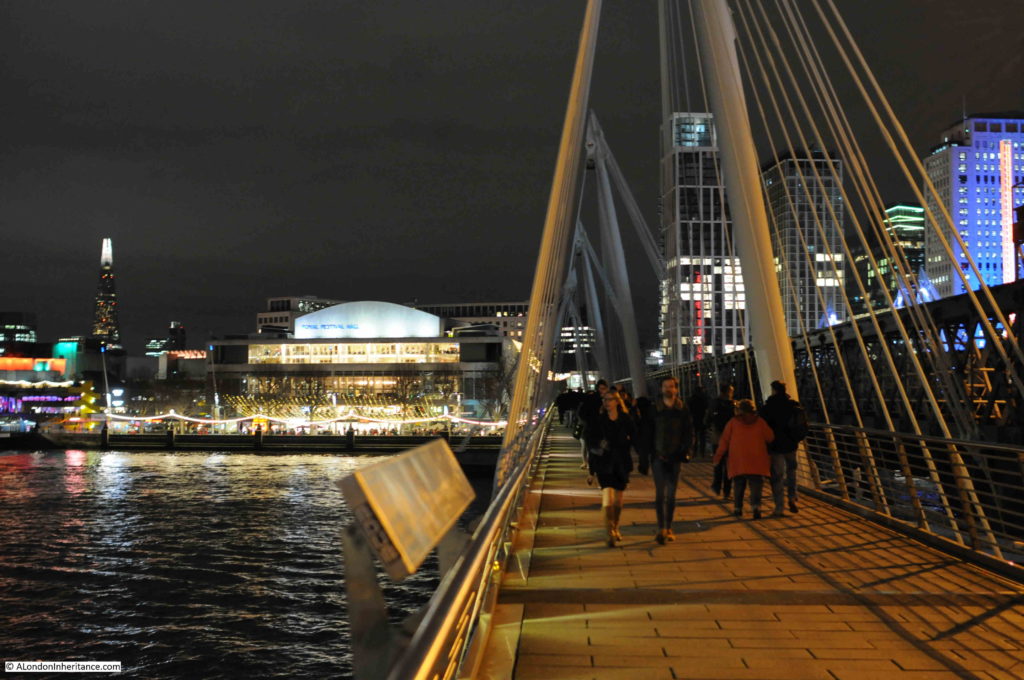 A view during the day of the Golden Jubilee bridge: 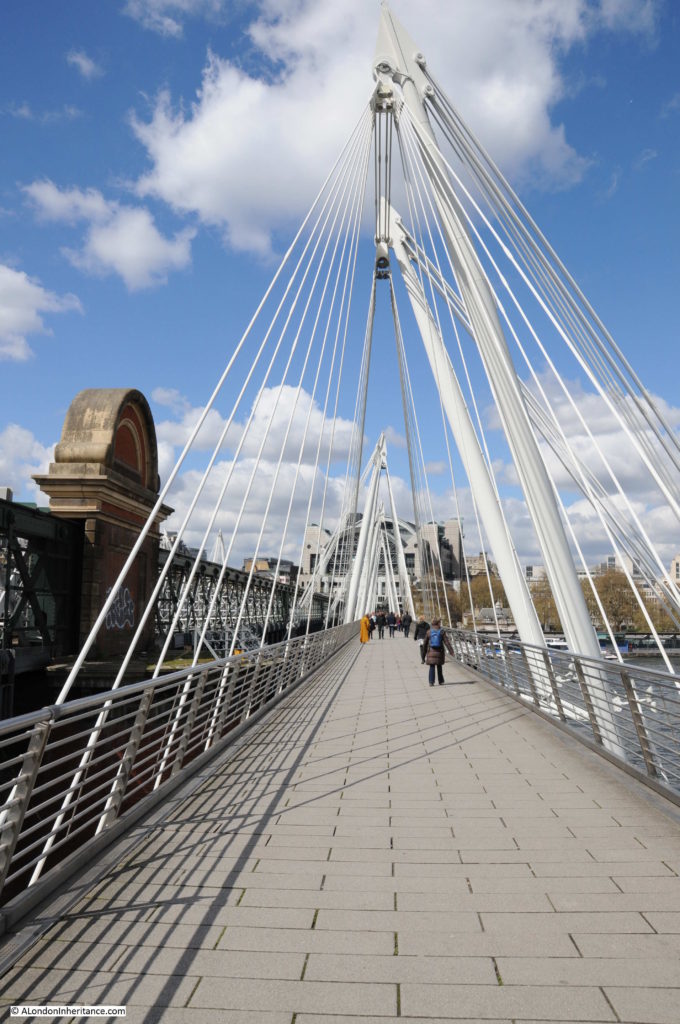 The architects state that the bridges “are slung from inclined pylons that pay homage to similar structures created for the 1951 Festival of Britain, held on the adjoining South Bank”.

As evidence of this, the following photo was taken by my father from the southern end of Hungerford bridge, just after the Festival of Britain had closed, and shows the structures referenced by the architects. 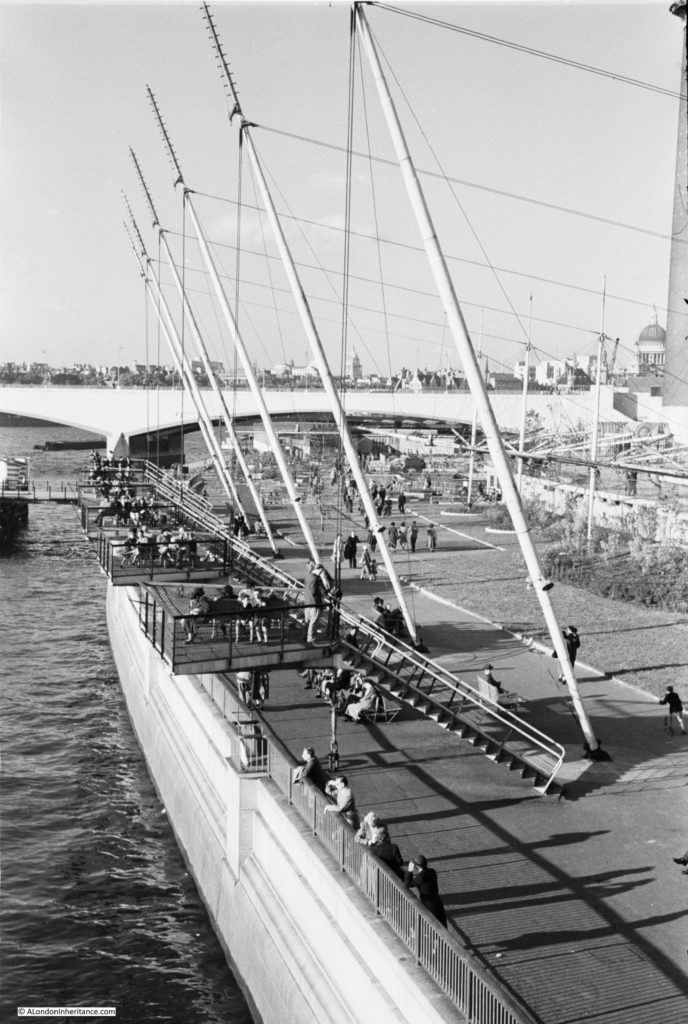 The view looking north along the walkway towards the illuminated buildings above Charing Cross Station. 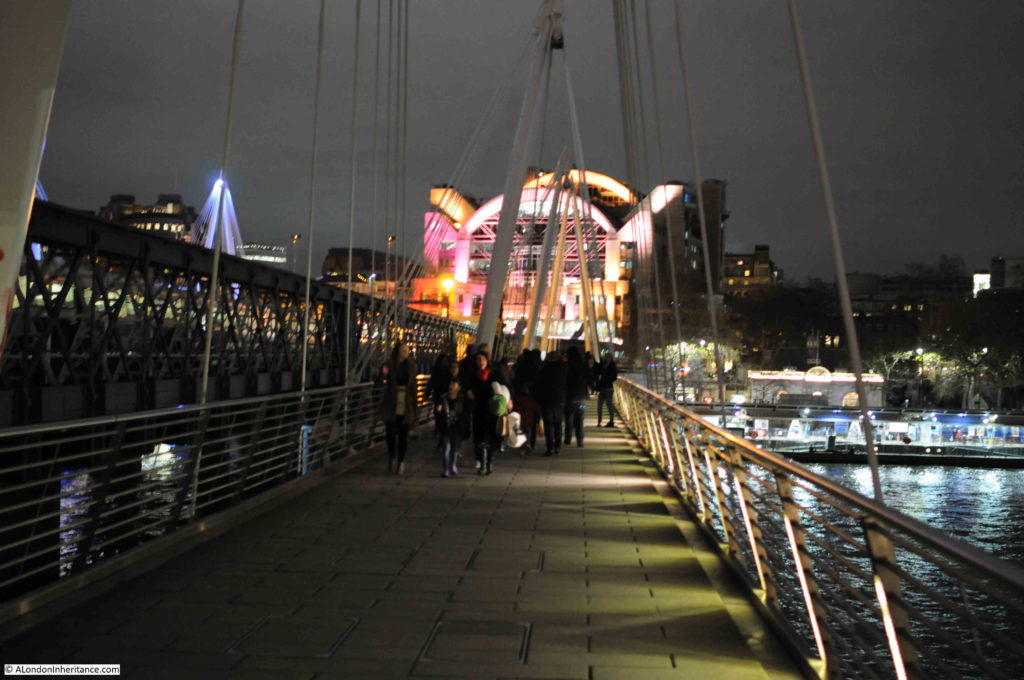 One final photo before I headed off north of the river – the Embankment from the walkway looking unusually quiet: 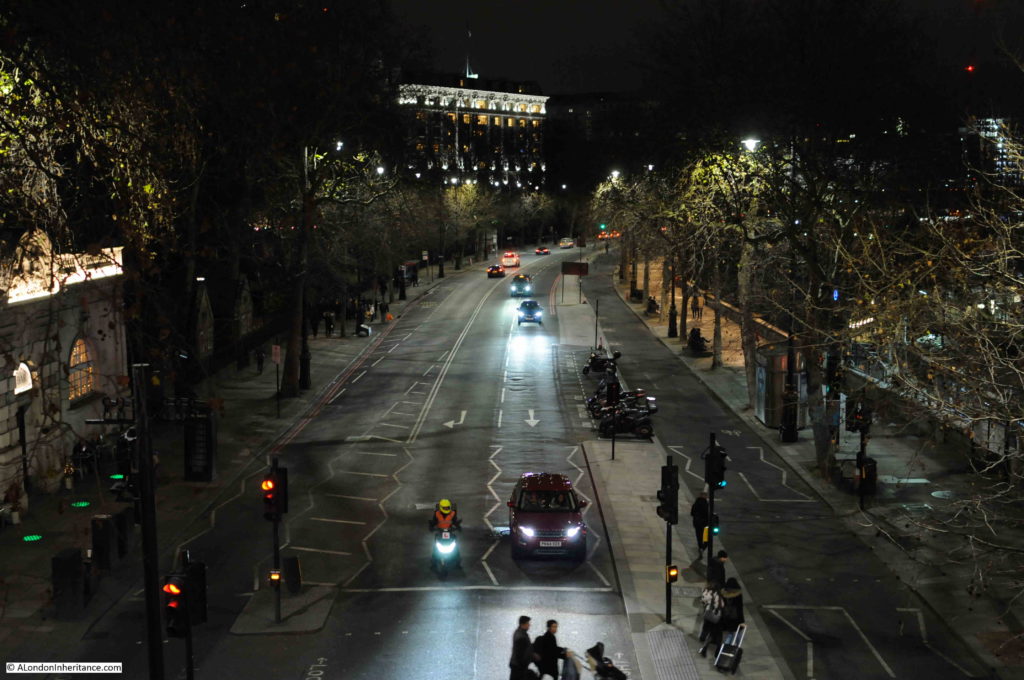 The Golden Jubilee Bridge is a considerable improvement over the previous walkway and provides a wonderful location to look at a spectacular view of the river, north and south banks, and the City, whether by day or night. The second walkway on the other side of Hungerford Bridge provides superb views towards Westminster.

The opening up of a walking route from the South Bank through Bankside and to Tower Bridge and beyond, along with attractions such as the London Eye and growth in the numbers of bars and restaurants has significantly increased walking across the river, along with the always present use of the bridge as a route between the north bank of the river and Waterloo Station.

Use of the river has grown since 1985 as evidenced by the considerably enlarged Embankment Pier.

In another 35 years time, the Royal Festival Hall will be just over 100 years old – it will be interesting to see how the area changes in the coming decades. One change I suspect will happen is the growth of tower blocks on the south bank beyond Waterloo Bridge and across the City. The area around the old London Weekend Television tower block and the London Studios will certainly look very different.