HS2 has been in the news during the week with the announcement that the scheme will go ahead. I have been following the development of the Euston end of the line since 2017 when I photographed St James Gardens before the area was closed allowing the archaeological excavations of the original cemetery to start.

I wanted to follow the development of the area as this will be the largest above ground transport project in central London for at least the next ten years, so I planned to revisit the site in February of each year to see how the site and the new terminus for HS2 develops.

My posts so far are:

An exploration of the St James Gardens in 2017

The Streets Under The HS2 Platforms And Concourse in 2018

Why am I interested in following the progress of the HS2 station at Euston? I have always tried to visit and photograph sites before, during and after development, an interest that probably came from first seeing some of my father’s photos. For example, the construction of the Royal Festival Hall, and Bankside Power Station. When the new station is complete, the area will look very different, and it will be fascinating to look back and watch how the development progressed.

The weather was sunny and calm last Saturday, Storm Ciara would arrive the following day, so I used the opportunity for a walk around Euston to see how the site has changed and what progress has been made since February 2019.

The following photos are a record of the area in February 2020. 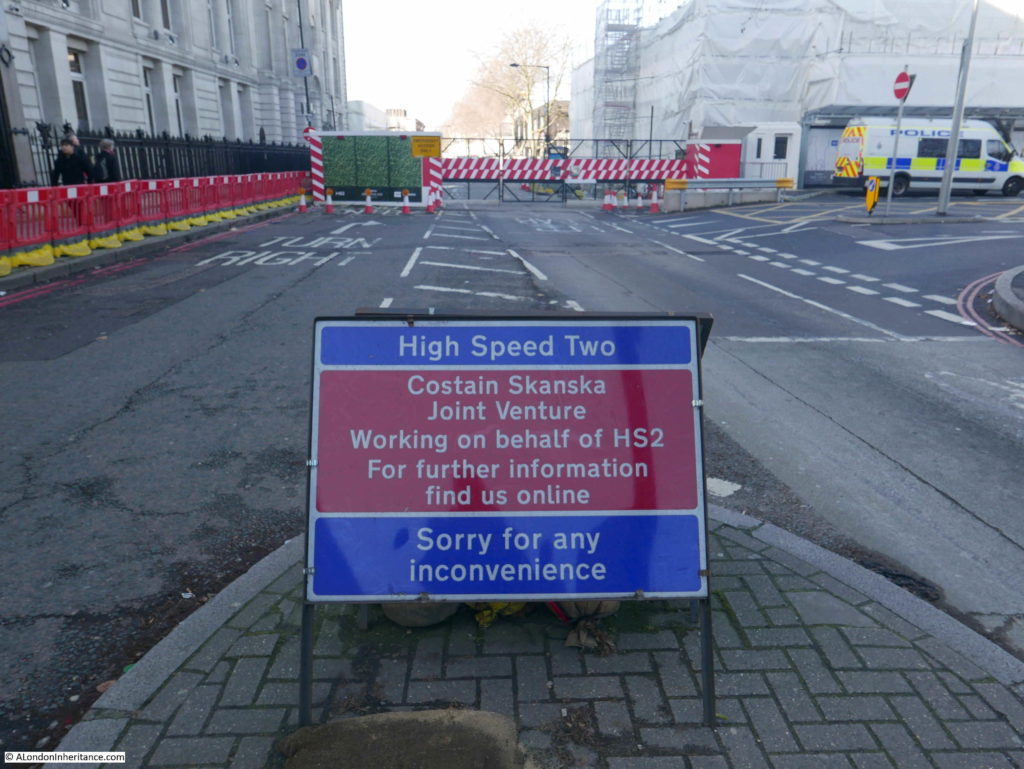 The Government’s announcement of the go-ahead for HS2 implied that initially trains will terminate at Old Oak Common, with Euston following later, and that HS2 had lost responsibility for the development of Euston Station.

The map below shows the area to the west of Euston Station that will be occupied by the platforms for HS2 when the scheme is complete. The numbers are the locations from where the photos in today’s post were taken. 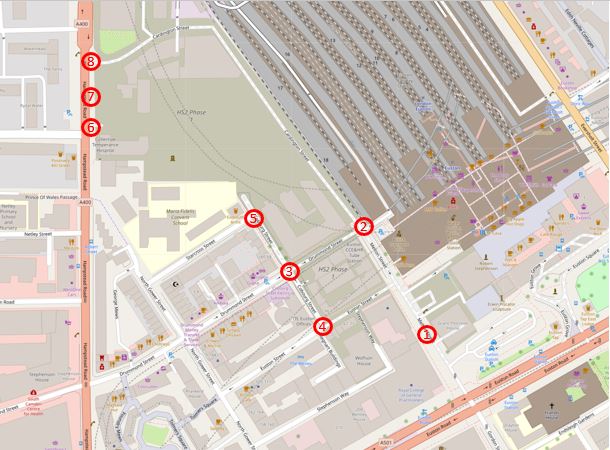 This is the view from location number one, looking north along Melton Street. Euston Station is to the right of the photo. 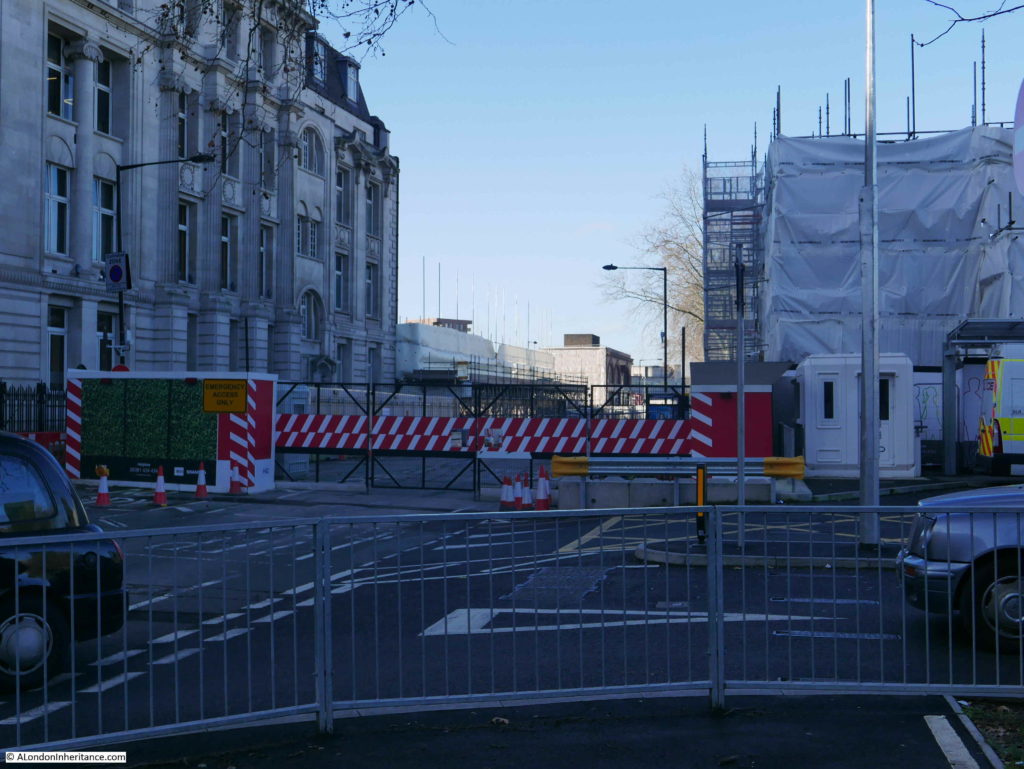 It is still possible to exit the station, walk along the pavement of Melton Street (the wooden panels on the left of the photo below separate the pavement from the street which is fully closed). There is a crossing point to cross over Melton Street and get to Drummond Street. This is the view looking back along the closed Melton Street towards the Euston Road from location two on the map. 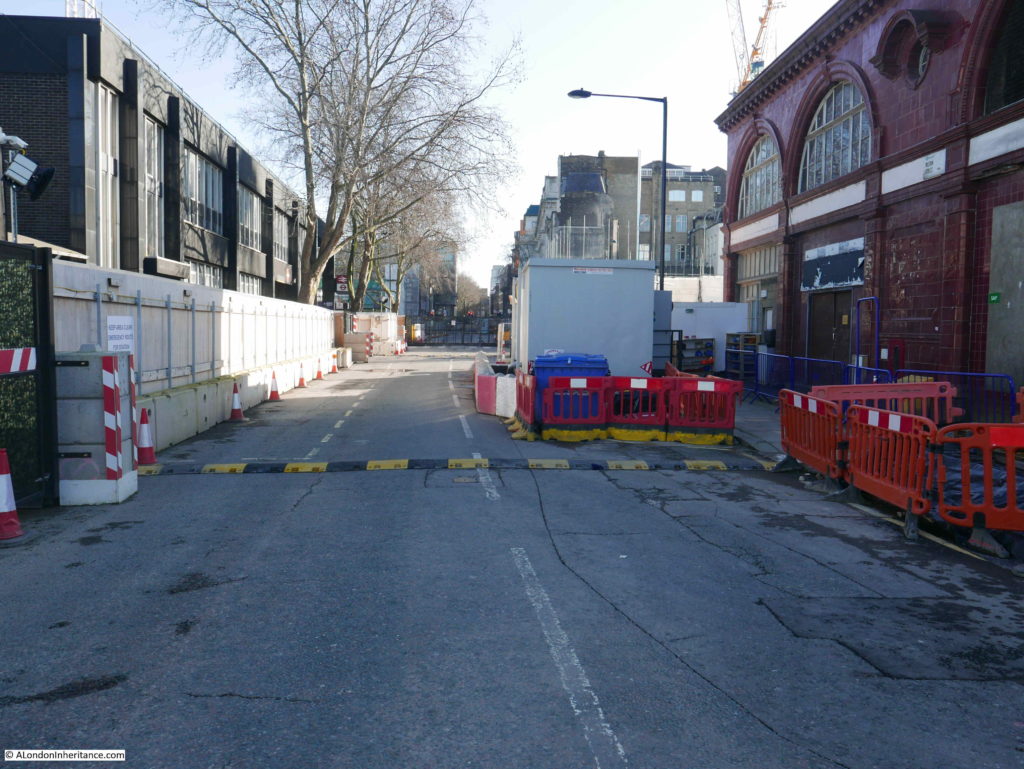 Although the majority of the surrounding buildings have been demolished, the disused underground station entrance on the corner of Melton and Drummond Streets is still there. The station housed an air conditioning system for the tunnels below and also has access to the tunnels, so I suspect it is a more complex structure to demolish. 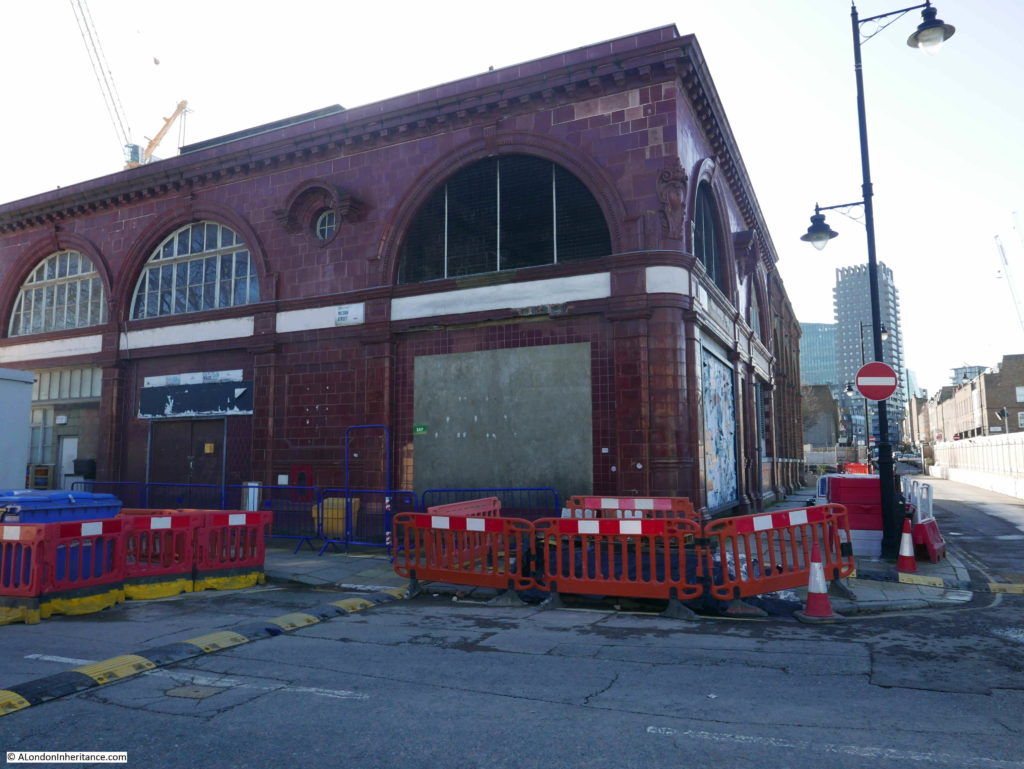 When I took the London Transport Museum, Hidden London tour of Euston Station, the entrance to the tunnels was through the building shown in the above photo. The tours are still being run so the entrance is possibly still in use, or an alternative route is being used.

The following view, also from location two on the map, is looking north along Cardington Street, fully closed to pedestrians and traffic. 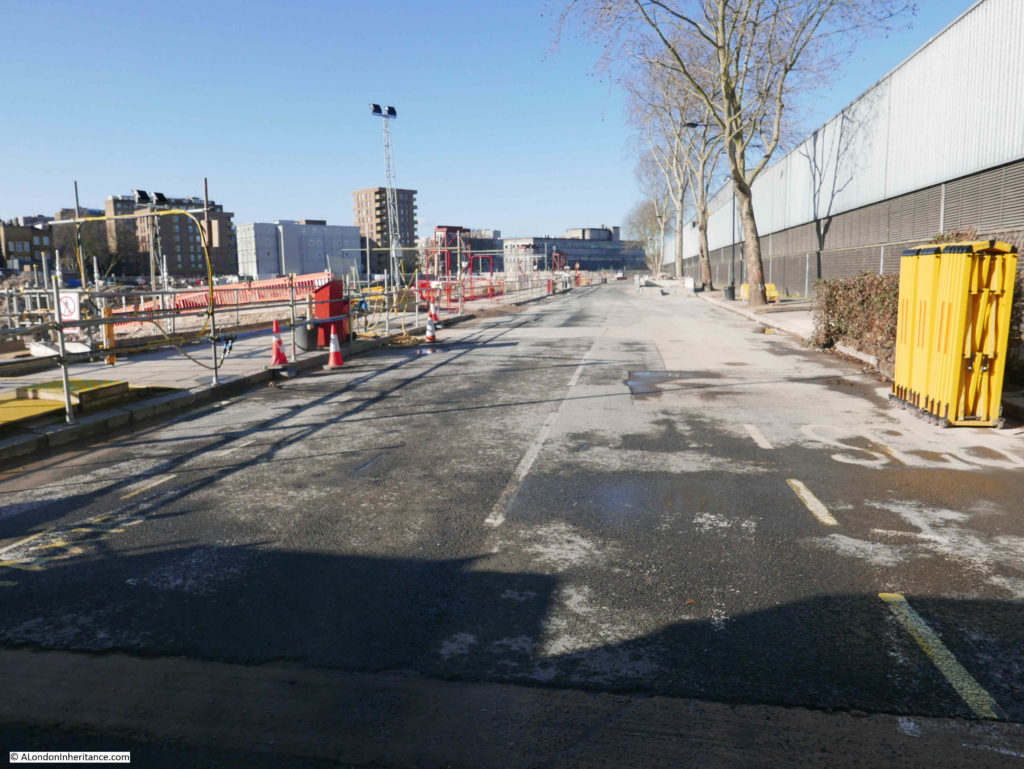 The following photo shows the view looking slight further to the left. In both the above and below photos, the old St James Gardens over the original cemetery was on the left, and on the immediate left was an Ibis Hotel. 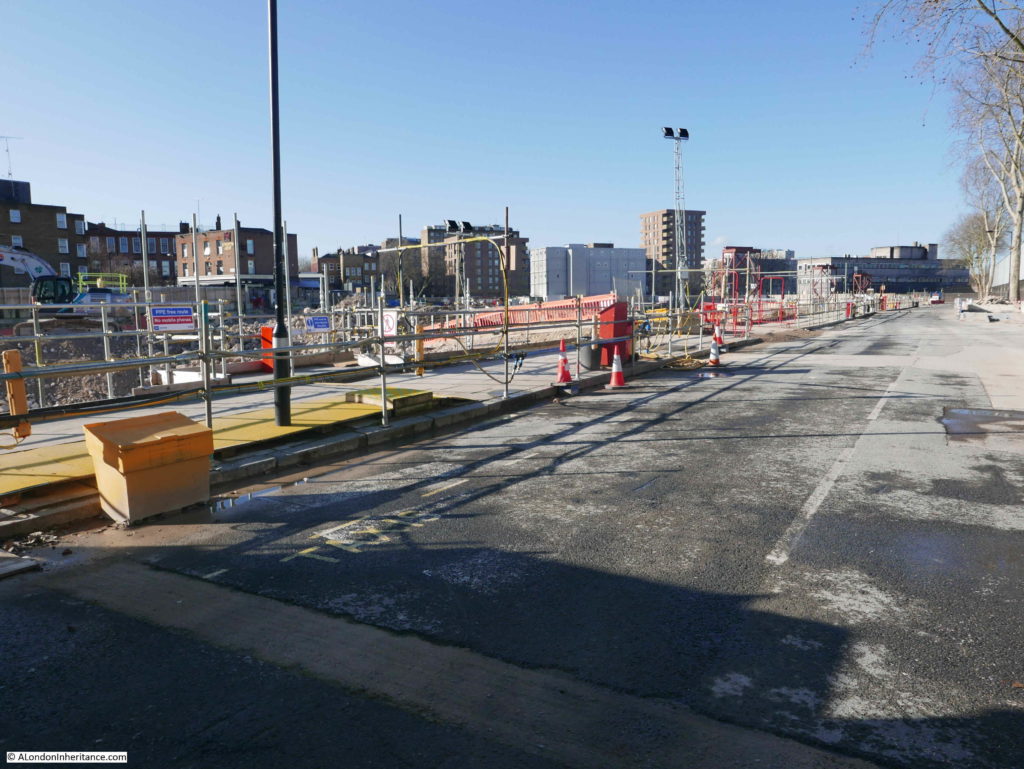 The following photo from 2017 soon after the cemetery was closed is from roughly the same place as the above photo and shows the same view before demolition commenced. 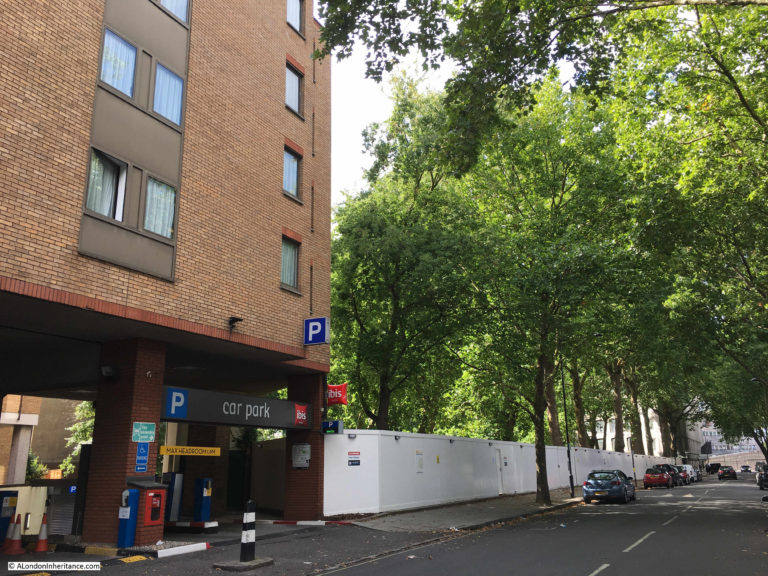 The stretch of Drummond Street leading up to the junction with Coburg Street is closed to traffic, however again, it is possible to walk along the pavement which is fenced off by wooden panels.

The following photo is from location three and is looking back towards Euston Station. The underground station entrance is the remaining building on the right. 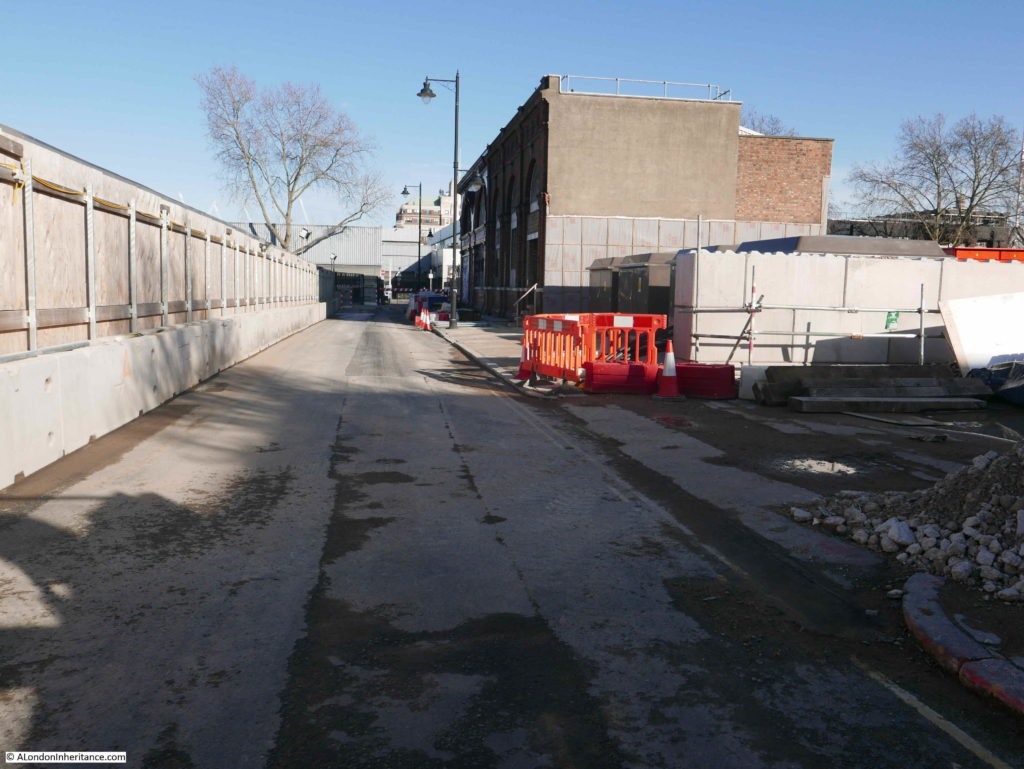 Walking south along Coburg Street, I get to location four on the map. The length of Euston Street up to Melton Street is closed off, but this was the view looking through the wire fencing from location four. 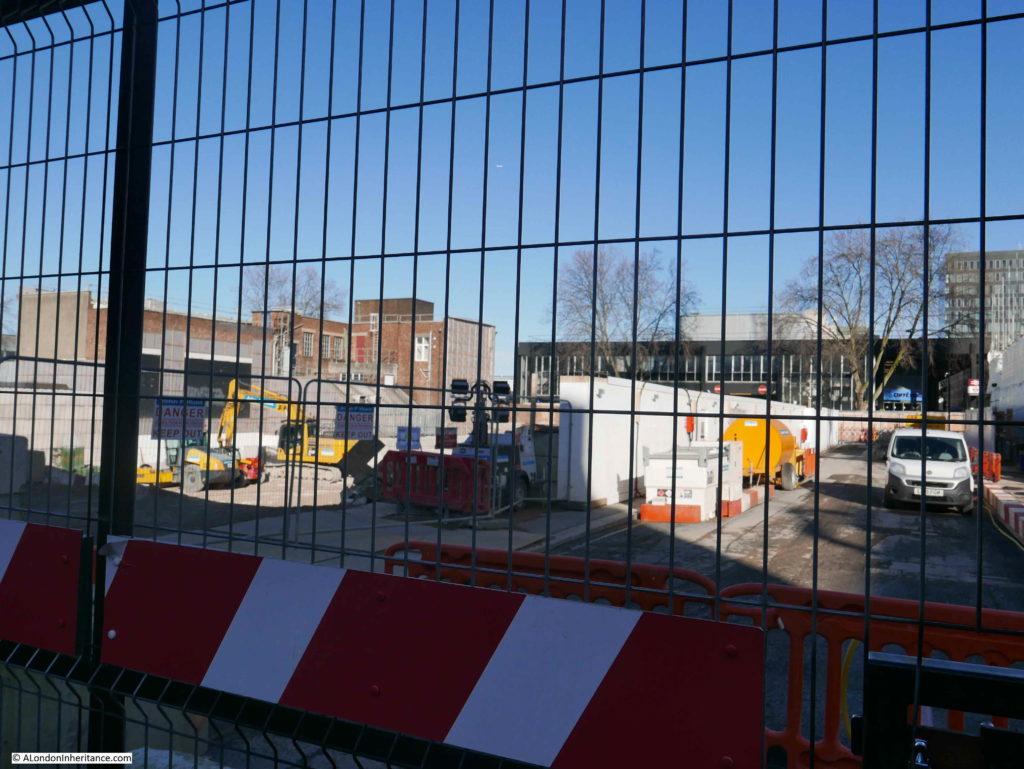 The following photo shows the same view prior to demolition of the Bree Louise pub, and the houses running along Coburg and Euston Streets. 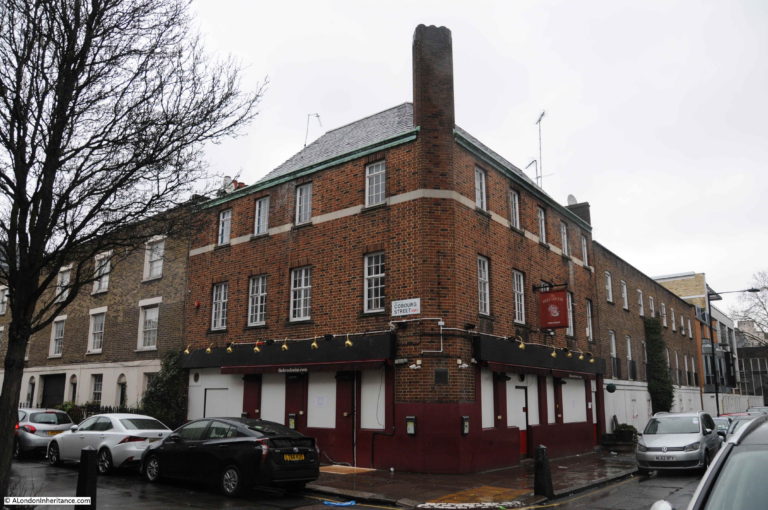 Looking through the wire fencing, the view towards Euston Road. 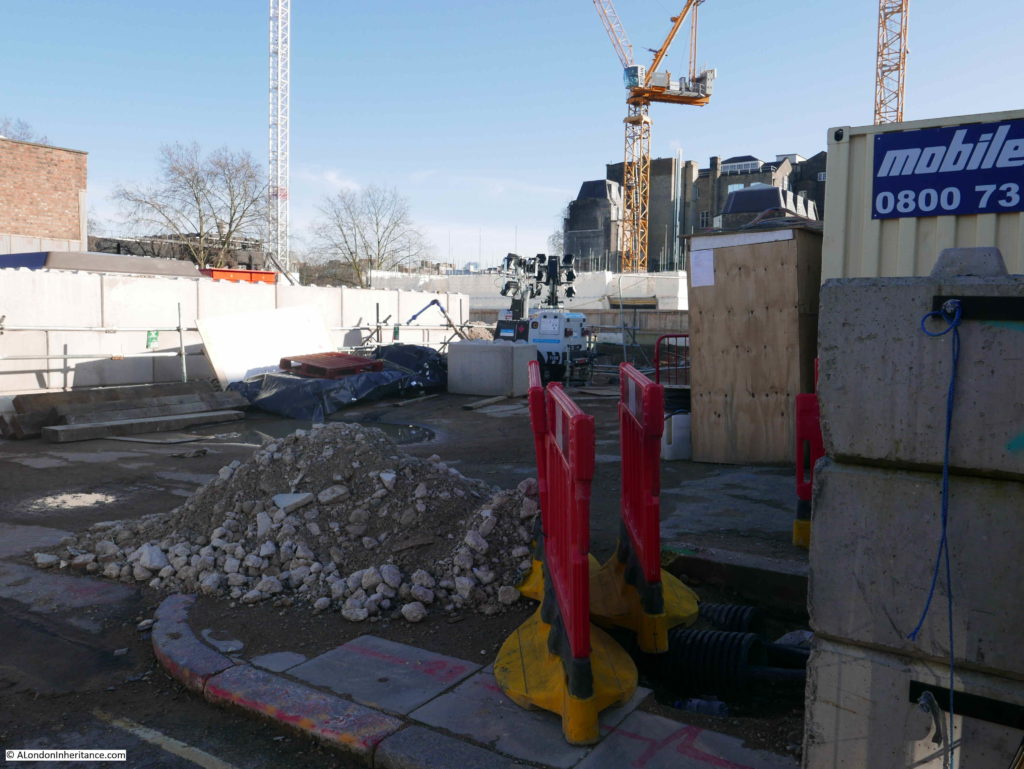 The view also from location four, looking back along Coburg Street. The terrace houses to the left of the Bree Louise once ran along where these hoardings now run. 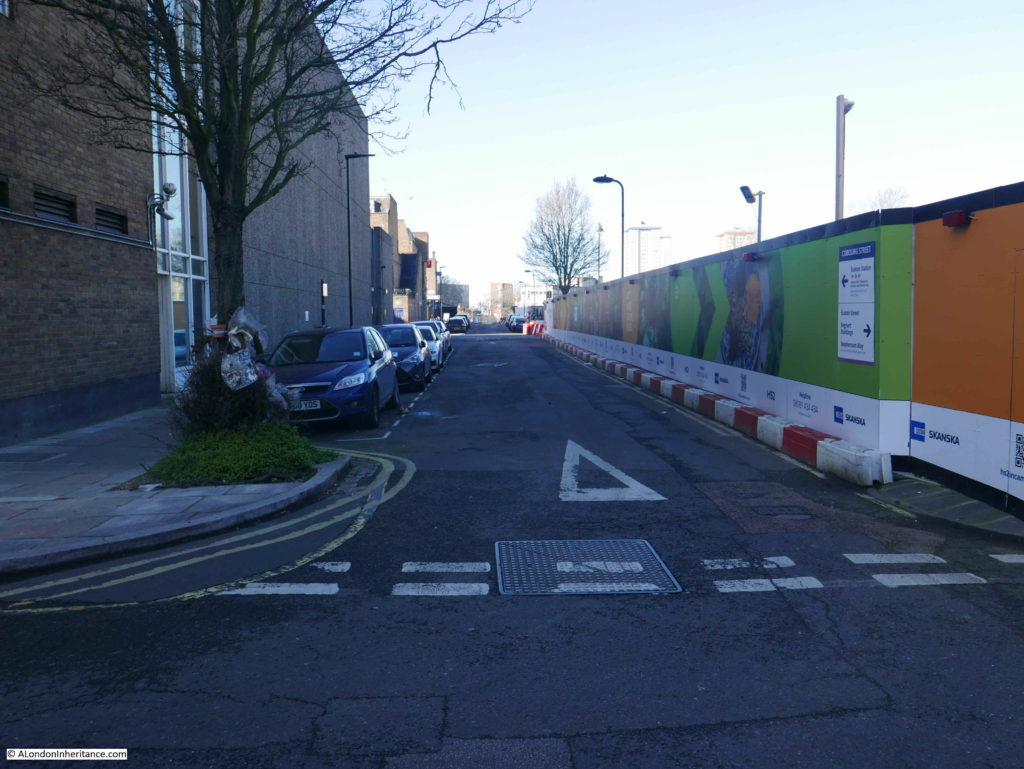 Back to the junction of Drummond and Coburg Streets and this is looking along the northern leg of Coburg Street. The rear of the Ibis Hotel was behind the hoardings on the right. 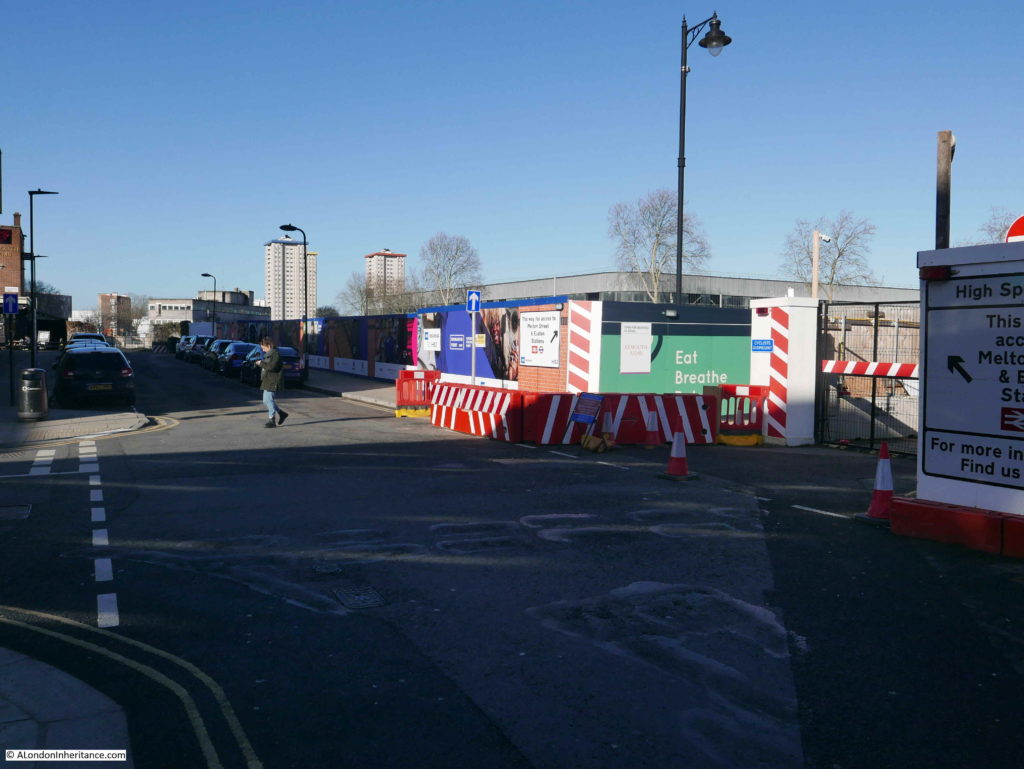 Looking down the closed section of Drummond Street. 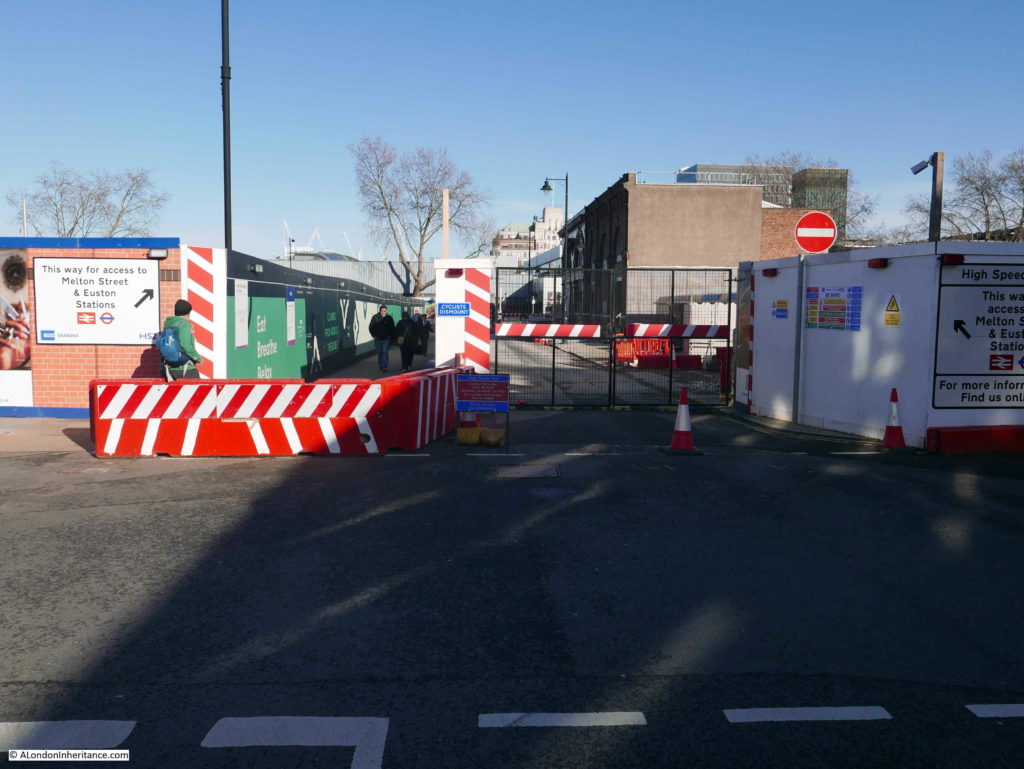 In the above photo, the gap on the right was originally the Calumet photography store, shown in the following photo. 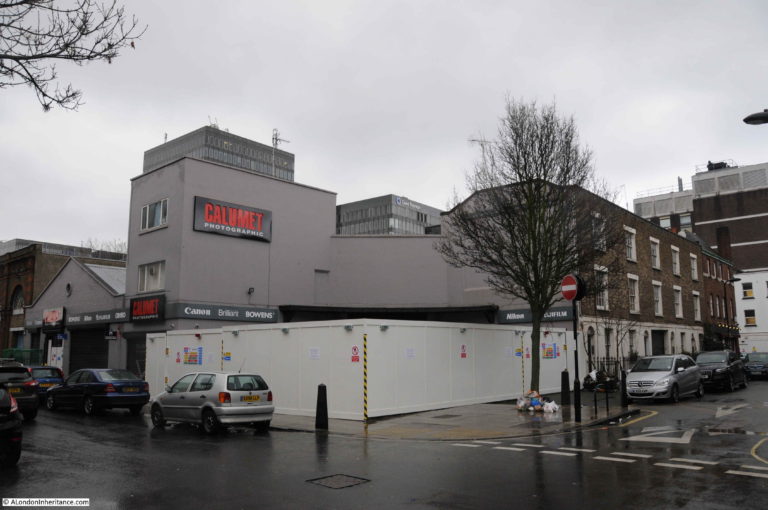 At the end of Coburg Street (location 5 on the map) is the Exnouth Arms, on the edge of the HS2 demolition area and still open. 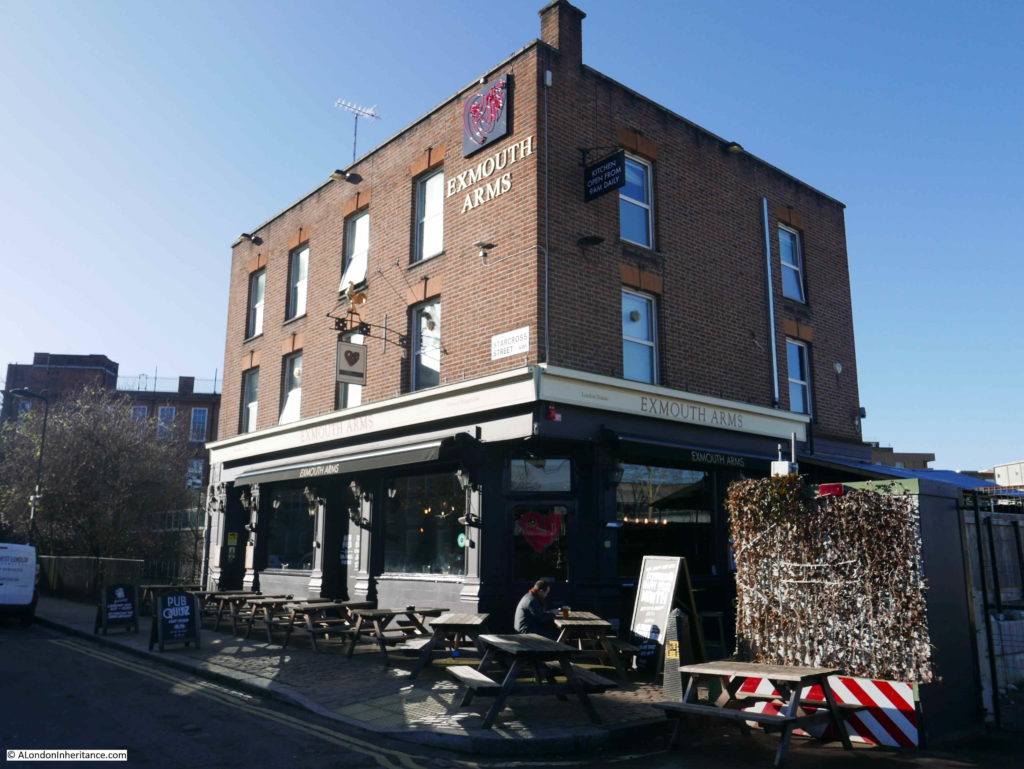 The view in the following photo is again at location five, and is looking through the gate to the right of the Exmouth Arms. 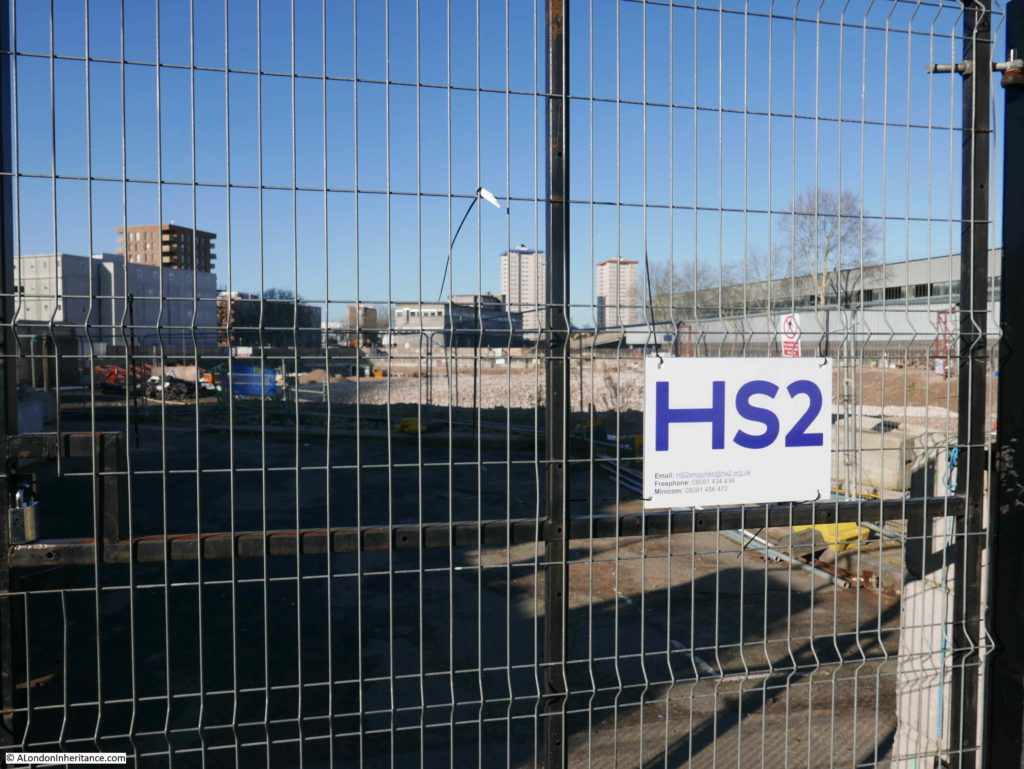 In the above photo, and the photo below where I put the camera lens between the wire mesh of the gate, the area shown is the location of the St James Gardens and the original cemetery. When I was here last, the archaeological excavation of the cemetery was still in progress and there was a very large marquee covering the whole area. 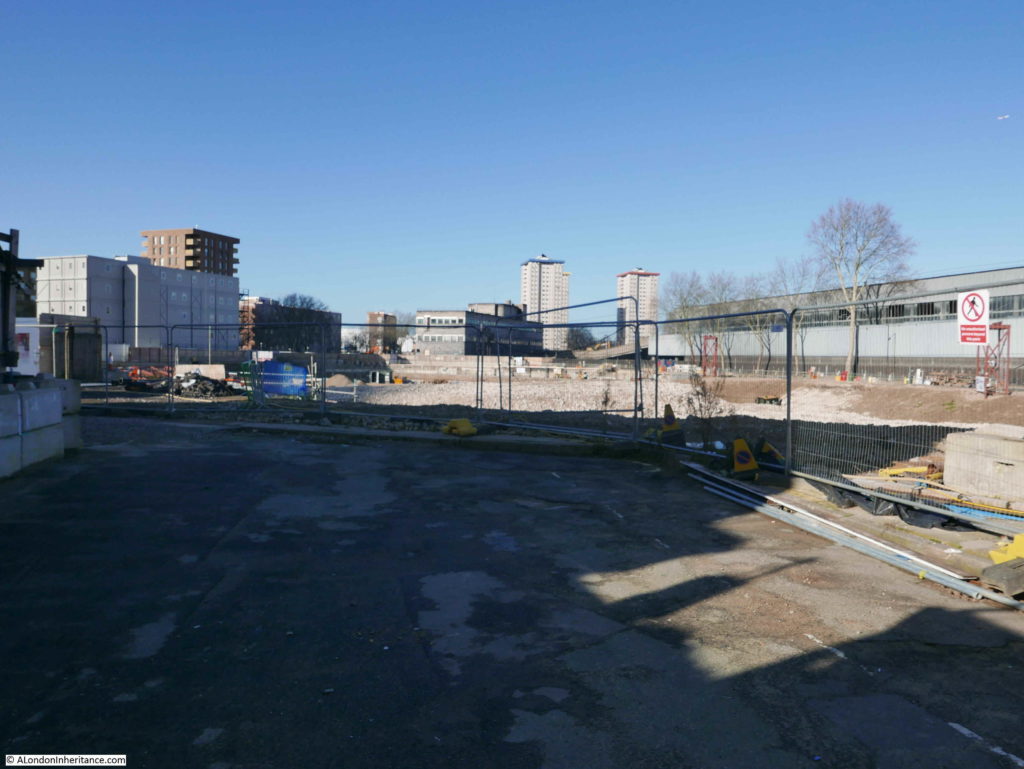 The following photo is an extract from the photo above. The trees are those that originally lined Cardington Street, opposite St James Gardens. The photo illustrates the depth of the excavation of the cemetery. An earth bank can be seen descending down to the level excavated, and the depth of this can be gauged by the roof of a digger which can just be seen. Clearance of the old graveyard was a major exercise. 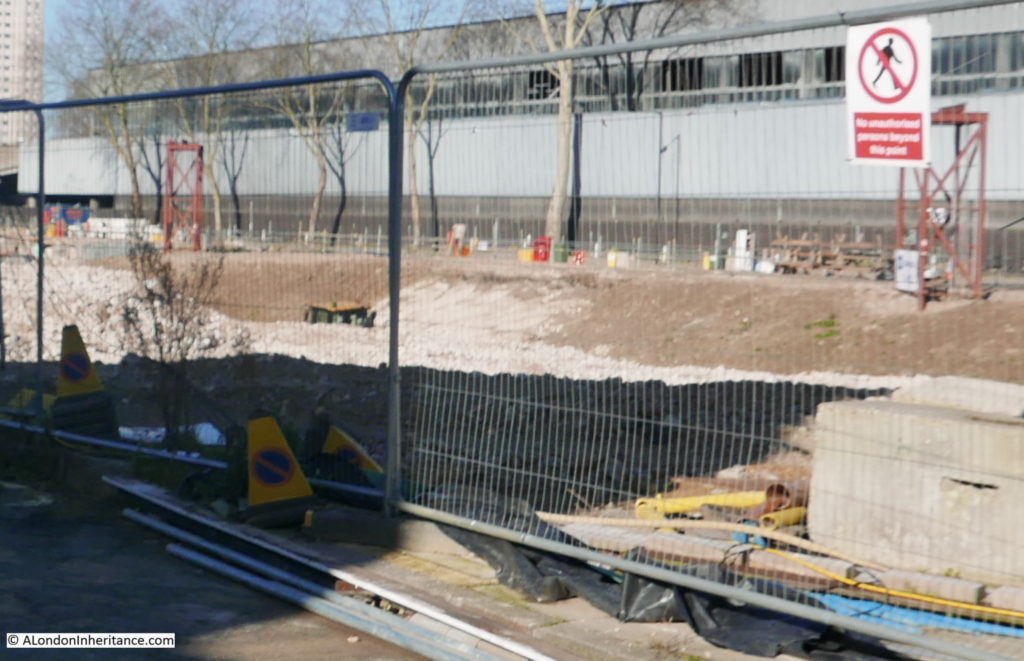 The above photos show the area once occupied by St James Gardens. The photo below shows the gardens in 2017, just before closure – hard to realise looking at the area now that these photos occupy the same space. 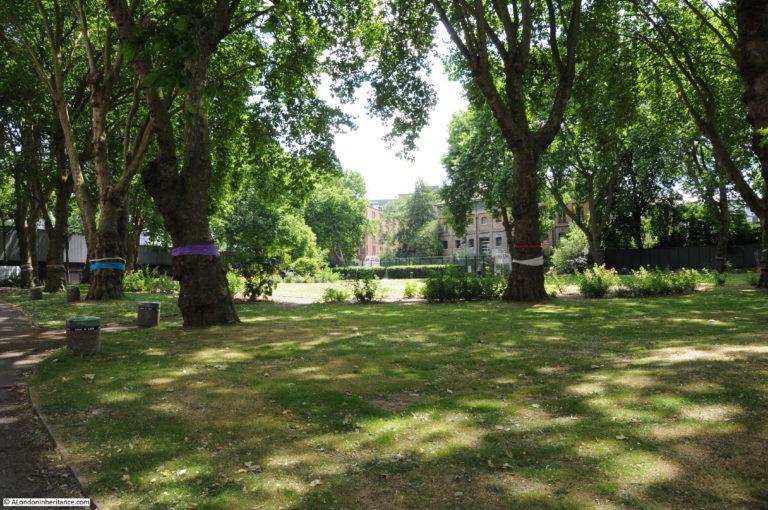 Looking back across Coburg Street towards Euston Station. The Ibis Hotel once blocked the view. 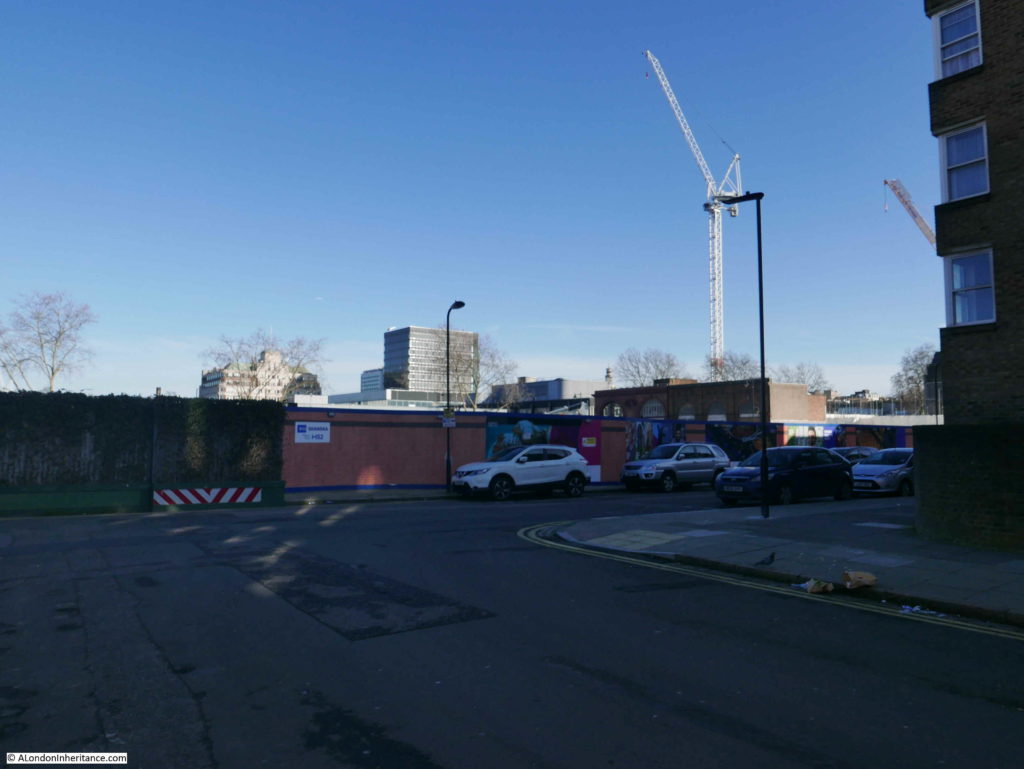 The area being demolished for HS2 also runs along the Hampstead Road, the location of the next set of stops, and the following photo was taken from location six. The photo is looking back towards Euston Station, again across the space once occupied by St James Gardens. The old underground station is at the base of the left most crane. 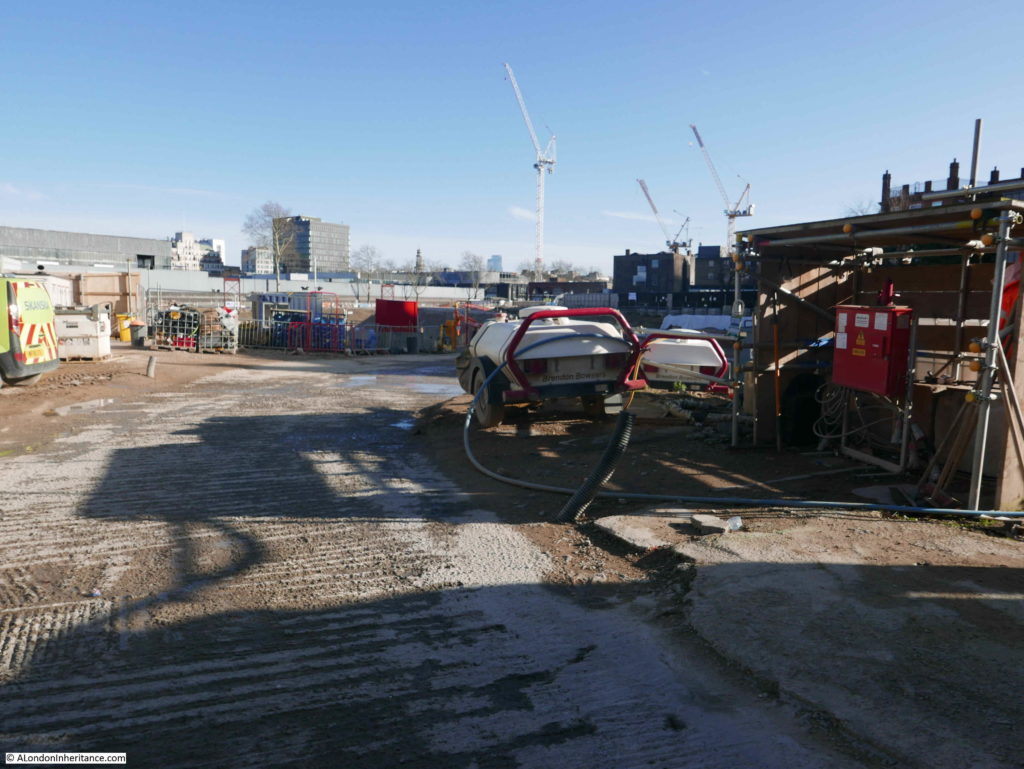 Location seven, and this shows a better view of the depth of the excavated St James Gardens/ cemetery. 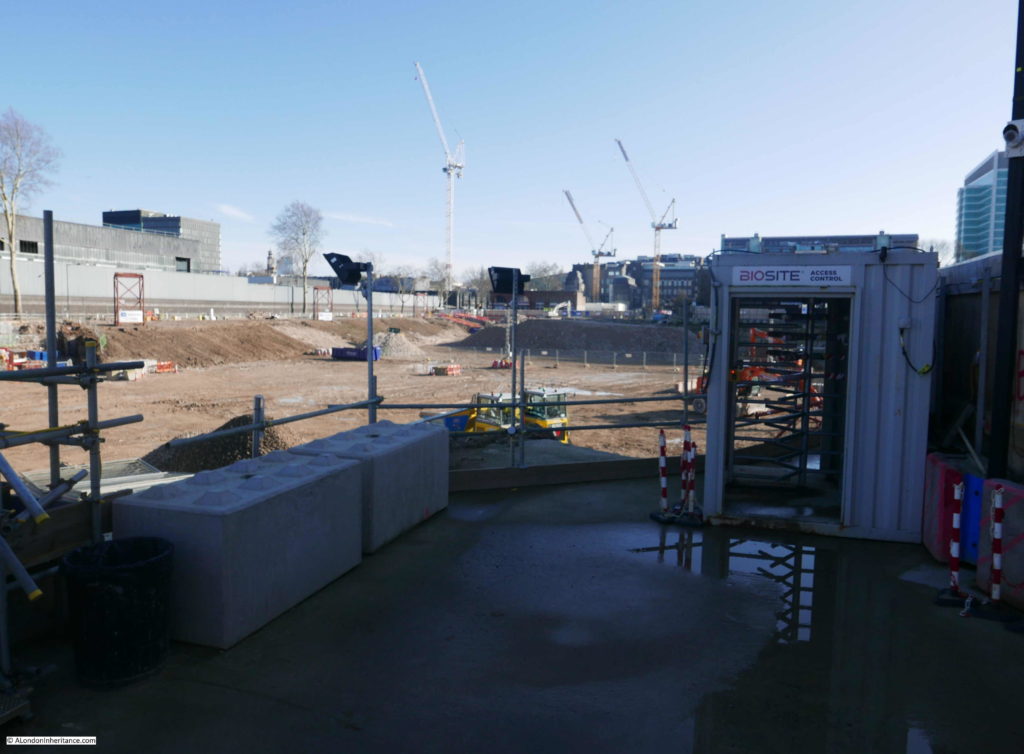 Last year, HS2 had built a small community space which included a number of artifacts from the cemetery, and the London Temperance Hospital, which once occupied the site. This was in the area to the left in the photo below, but now appears to have been cleared, apart from some of the information panels, one of which can be seen on the left. 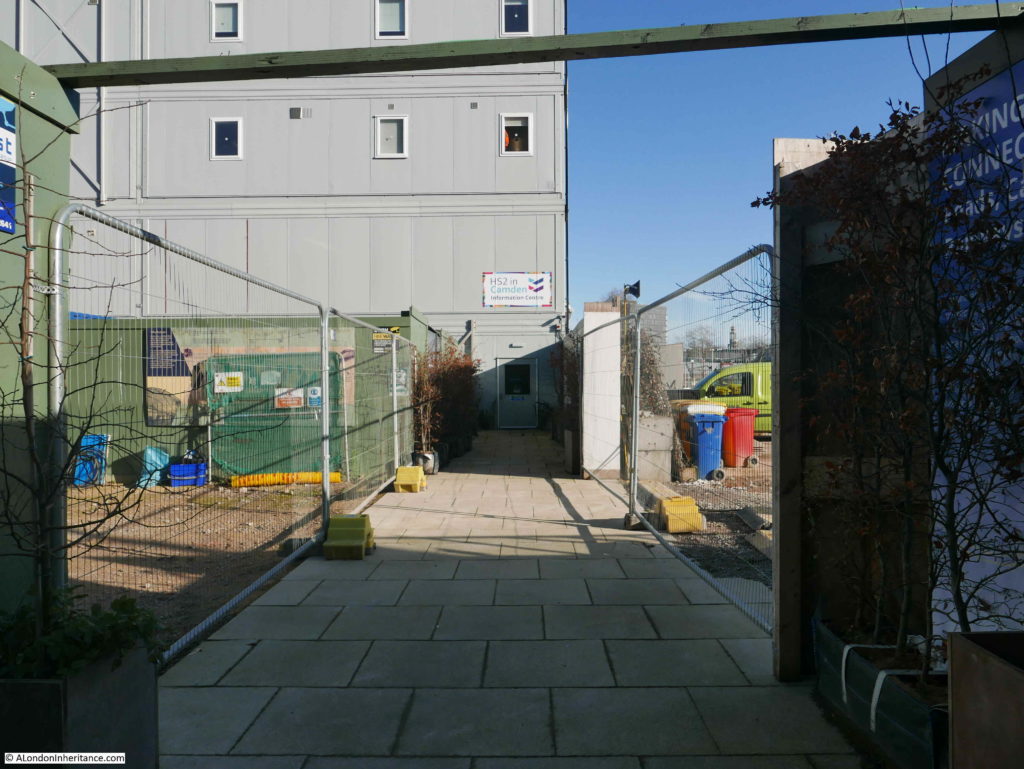 The temporary buildings at the end of the pathway are HS2 site offices, however the ground floor door provides an entrance to an “HS2 in Camden” information centre. Unfortunately not open at the weekends, so I could not visit. The community space had on display one of the foundation stones from the London Temperance Hospital, so not sure where this has moved to (see last years post).

The following photo is from location eight. 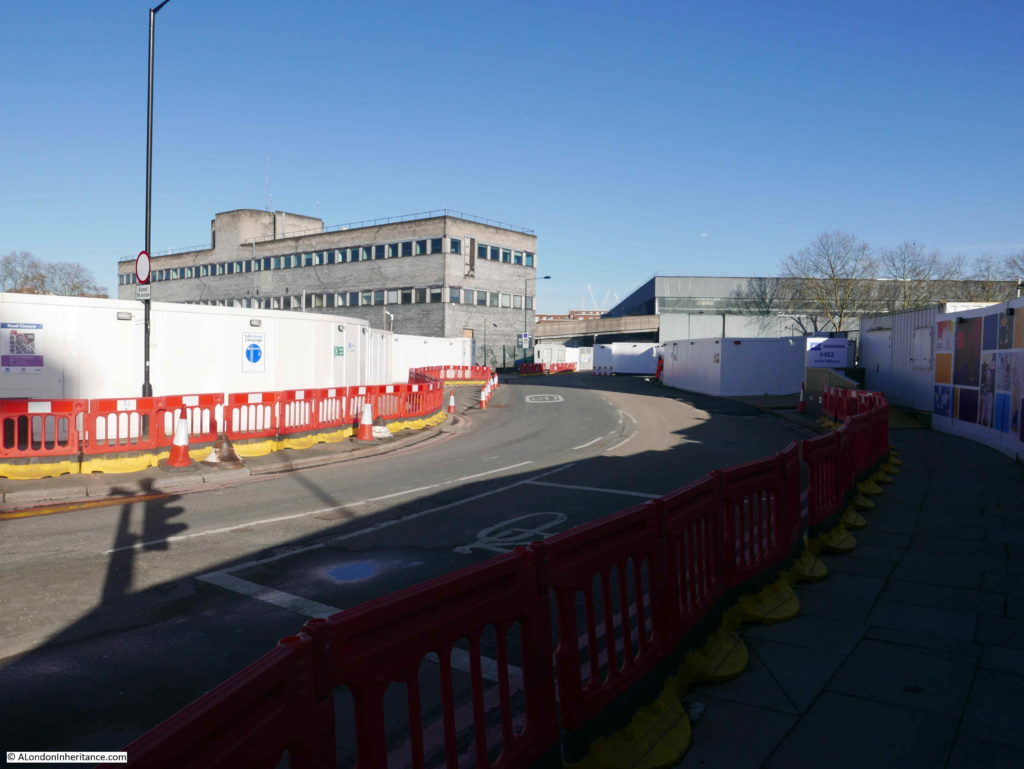 This is where Cardington Street joined the Hampstead Road, however as Cardington Street alongside the old gardens has all but disappeared, the short stub of road is closed off and only provides access to the HS2 site.

The following photo shows the one remaining building along this eastern side of the Hampstead Road, the former Saint Pancras Female Orphanage building. 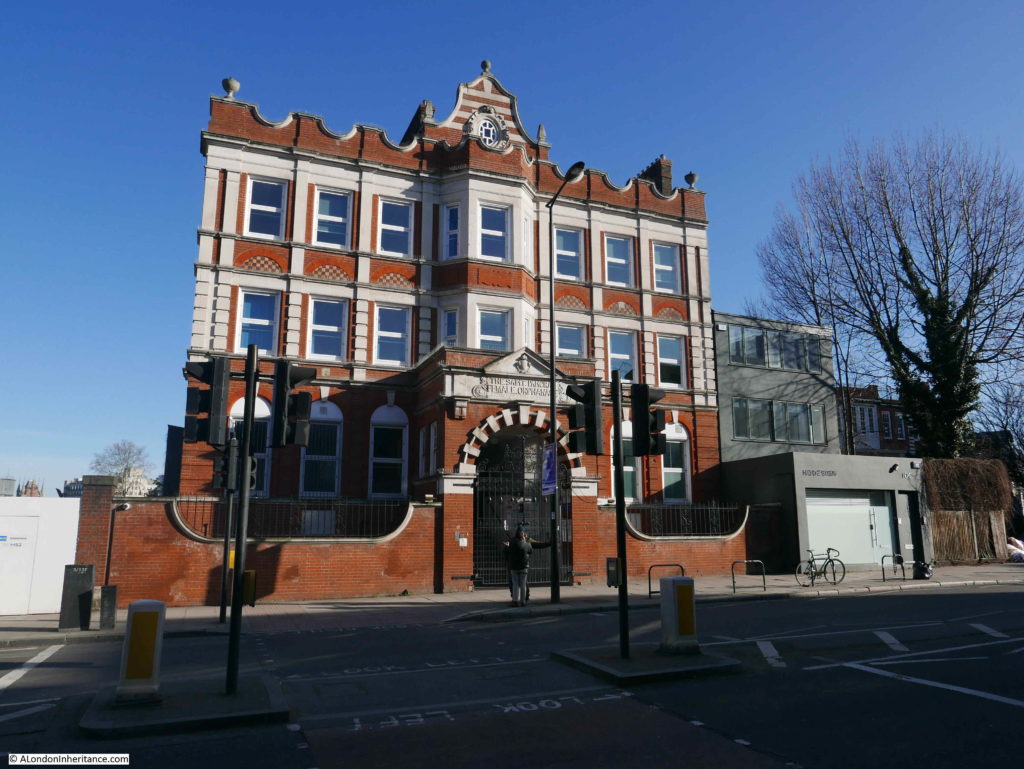 After the orphanage moved, the building was an annex of the London Temperance Hospital and is now an NHS facility.

That completed my 2020 view of the area being demolished for the future HS2 platforms and station extension at Euston, following much the same route as in the two previous years.

Euston Station will also be transformed, so I have been taking photos of the station as can currently be seen. The following photo is off the main entrance for traffic to the station from the Euston Road. 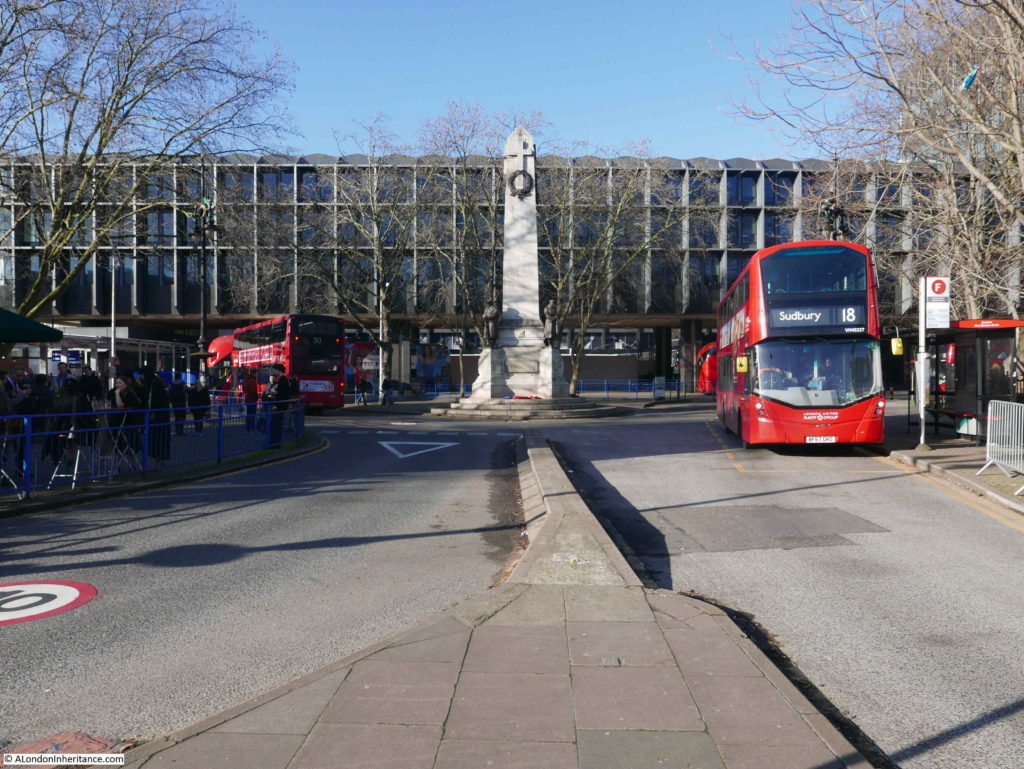 Since February 2019, most of the buildings that occupied the area that will become the HS2 station at Euston have been demolished.

Excavation of the cemetery that was under St James Gardens has been completed, so I assume the site is now ready for the build phase to start, however this is such a large area and there is a considerable amount of construction work to take place so I expect it will take many years.

Up to the announcement of the go-ahead there seemed to be some genuine doubt as to whether the new Government would support the project, which raised the question of what would be done with such a large area of prime London space. My fear was that it would have been sold off to property developers to recover some of the costs, which would have created another bland area of towers.

Whatever your views on HS2 (in many ways the name is wrong, whilst it is high-speed, this hides the real benefit of a significant addition of capacity and freeing up the existing lines for more local services), it now seems certain that London will be getting the first major new rail route and station extension since the rail link to the channel tunnel was built.

I will be returning in February next year, and it will be interesting to see if work has changed from demolition to construction.