Back in August, I published a number of London Postcards showing the city during the first decades of the 20th Century. For this week’s post I have another series of postcards from the same time period.

I find these fascinating as they show many different aspects of London and provide a tangible link with those who lived in, or were visiting London.

The first postcard is of a very wintry Royal Observatory at Greenwich. Taken at a time when this was still a working observatory. Very rare to see such snowfall in London today.

The postcard was posted at a very different time of year to the pictured scene, on the 31st August 1905. With a Greenwich postmark, posted to a child in Lowestoft with a birthday wish from his aunt and uncle. 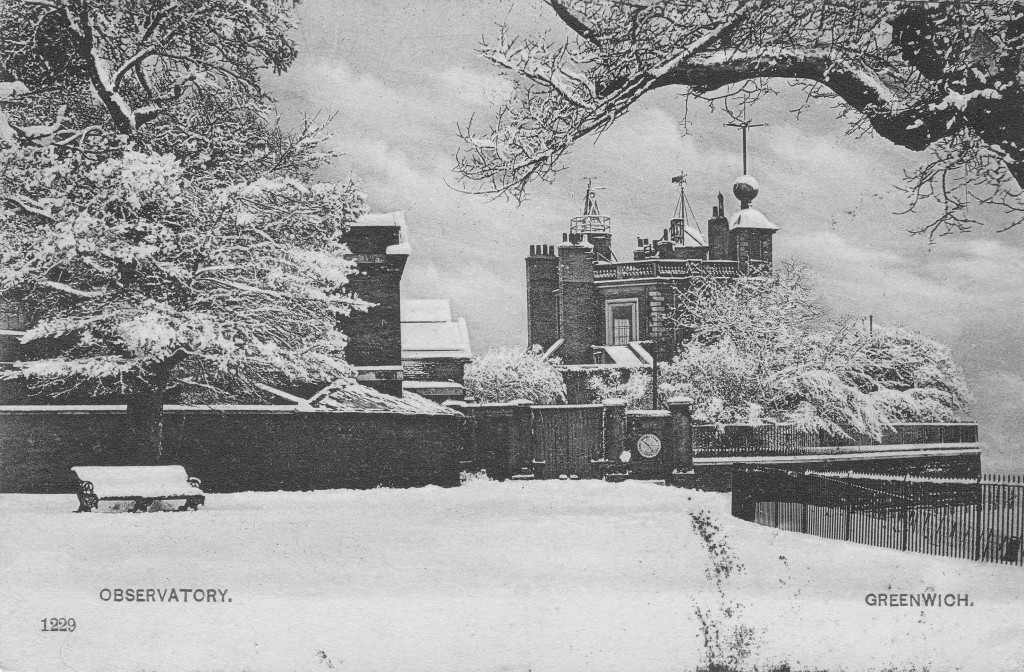 As well as scenic views, early postcards are also populated by Londoners. This postcard shows Covent Garden with some fantastic detail of a very busy street scene. This was at a time when wearing a hat was almost mandatory, with the type of hat indicating your position in the social structure of the day. The scene is also piled high with baskets ready to transport goods to and from the market. 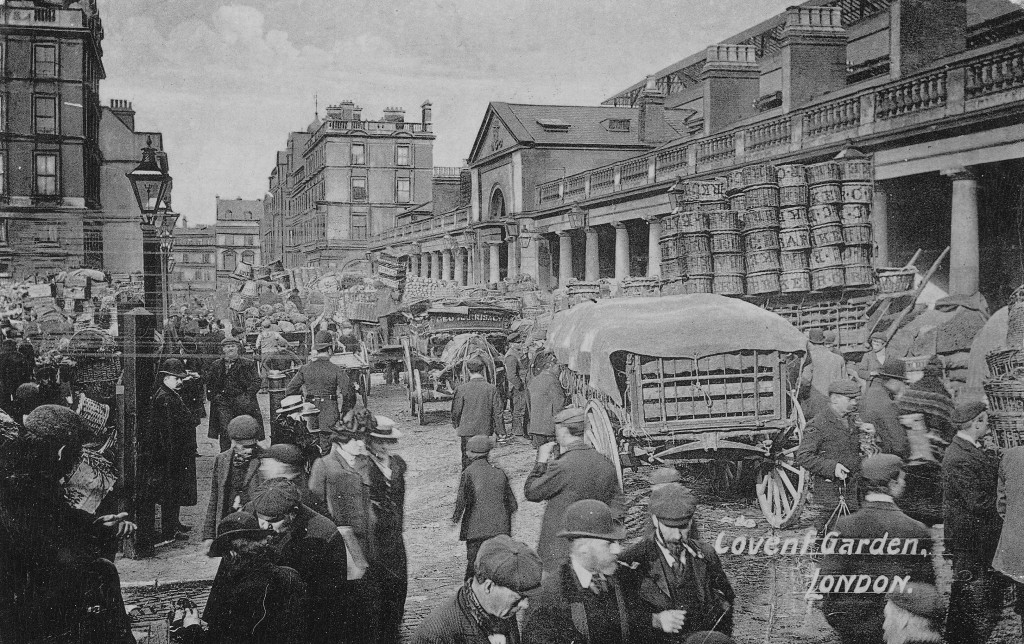 The following postcard shows Regent Street at a time when almost all shops had awnings or shop blinds. The shop on the right is the London Stereoscopic Company. Formed during the 1850s, the company started selling stereoscopic photos and viewers and then went into the general photographic business selling cameras, photographic paper and other photography supplies. The company lasted until 1922.

The bus in the foreground is the number 13 covering Finchley Road, Baker Street, Oxford Street, Piccadilly Circus, Charing Cross and Fleet Street. The number 13 bus route today covers many of the same locations. 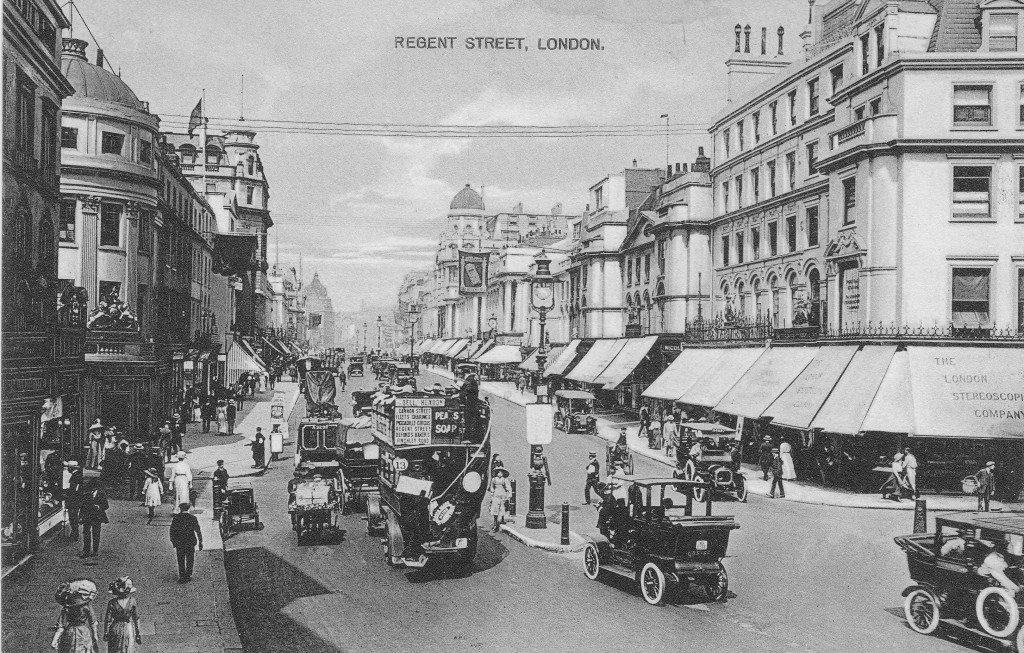 Another street scene, this time Holborn (posted on the 18th September 1913). 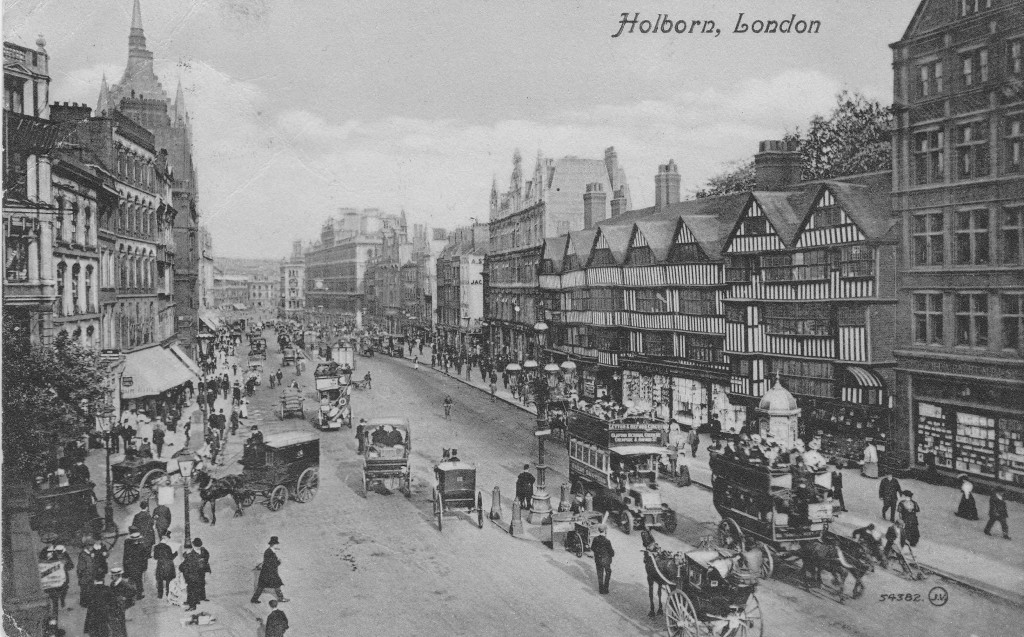 All these photos show the main street lamps on islands in the centre of the road. When electric lighting was introduced to the streets of London, the centre of the road was found to be the best location to spread light across both sides of the road. These lighting islands also had other benefits. A report presented to the Vestry of St. Pancras in 1891 covering the use of public lighting by electricity claimed that one advantage of central street lighting in busy thoroughfares is that they regulate the traffic. The report stated:

“Your committee are informed that the Commissioner of Metropolitan Police has suggested that there ought to be a rest at that point to prevent the numerous stoppages and accidents that occur there. The Police seem to be strongly of the opinion that the fixing of rests assists very materially in the regulation of the traffic, and your Committee feel therefore that although at first sight many people may think the lighting from the centre of the road would tend to obstruction, it really assists in facilitating the traffic and preventing obstruction in crowded thorough-fares.”

“Rests” refers to the islands built in the centre of the road where a street lamp could be installed and protected from traffic. They also provided a safe stopping point, or rest, for pedestrians trying to cross the road. The report was written as part of the planning for the installation of electric arc lamps in Tottenham Court Road. The following postcard shows Tottenham Court Road taken looking north from the junction with Charing Cross Road. The buildings on the left, along with the pub are still there. 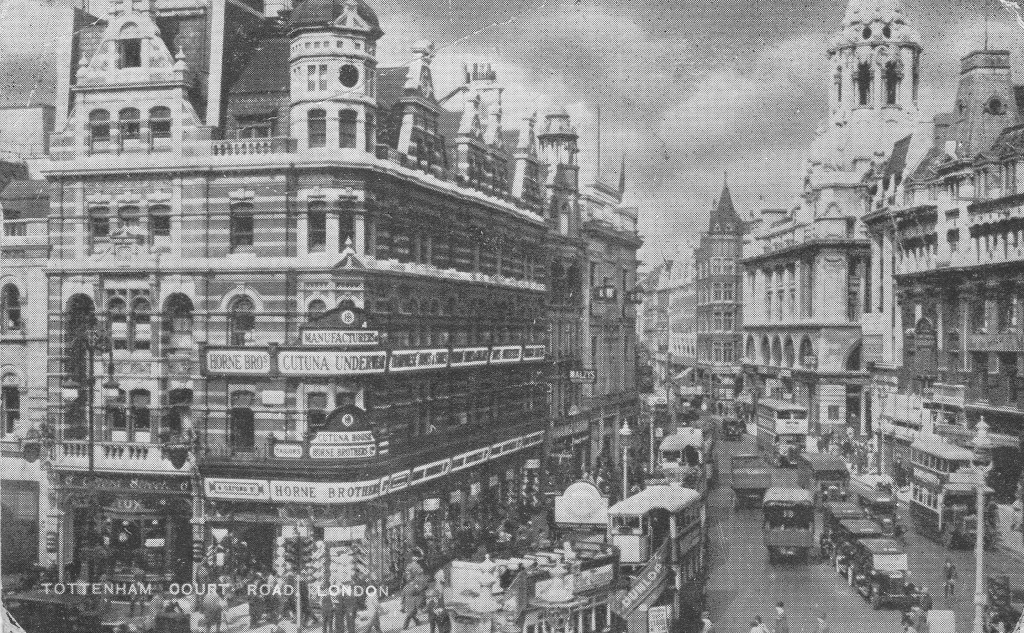 The above postcard was sent by a visitor to London from North Wales who “has been seeing the sights and are now going to the zoo.”

Perhaps one of those sights was Leicester Square, much quieter than it is today, possibly a weekend in winter when sitting in, or running through the square was the ideal way to pass the afternoon. The building in the background with the large flag is the original Empire Theatre. Opened in 1884 and demolished in 1927. 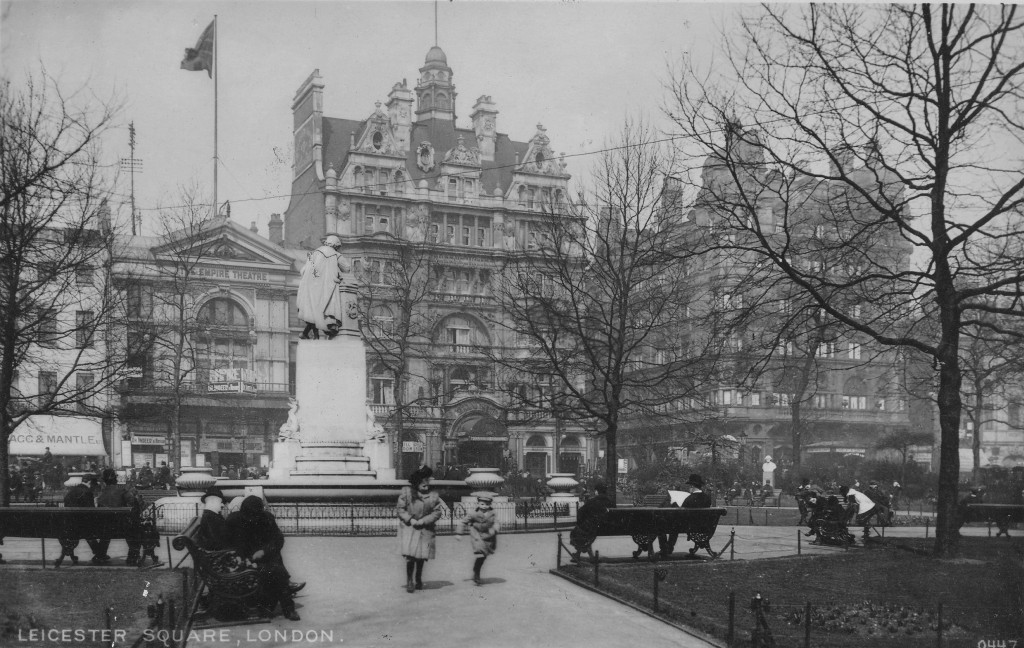 It was not just central London locations that were popular subjects for postcards. The following card, postmarked 1912, shows Clapham Junction. Although the type of traffic has changed, the scene looks remarkably similar today, although the Arding and Hobbs department store on the corner is now a Debenhams.

The sender of the card wrote “On back is the new Arding & Hobbs. Old building burnt down a few years ago.” The new building shown in the postcard was completed in 1910. 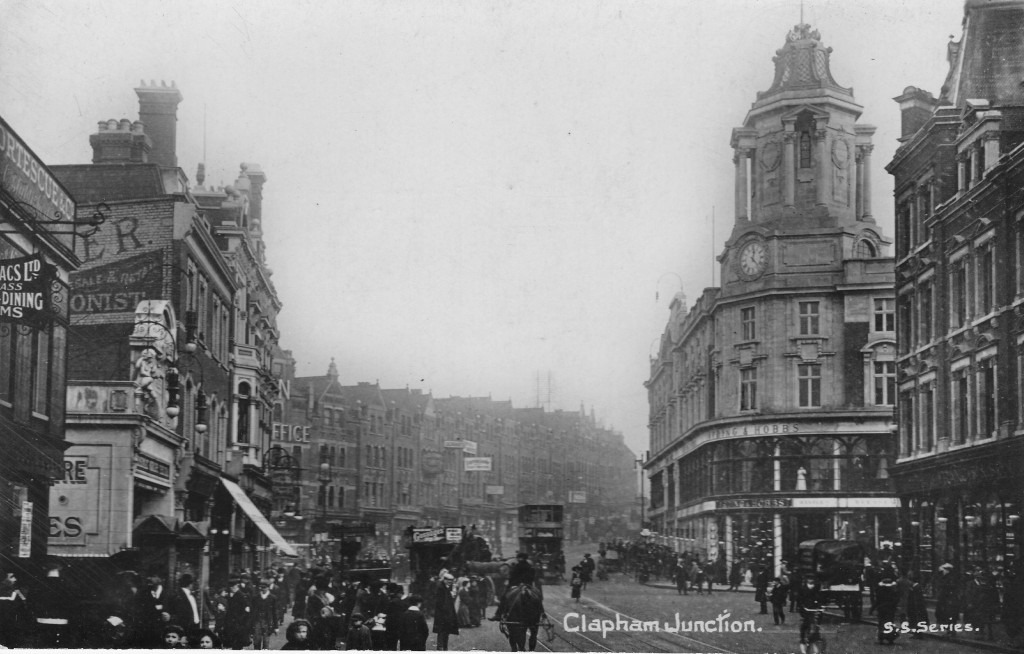 At first glance, the following photo looks to be of Charing Cross Station, although, as the name across the building confirms, it is the original Cannon Street Hotel, forming the entrance to Cannon Street Station. 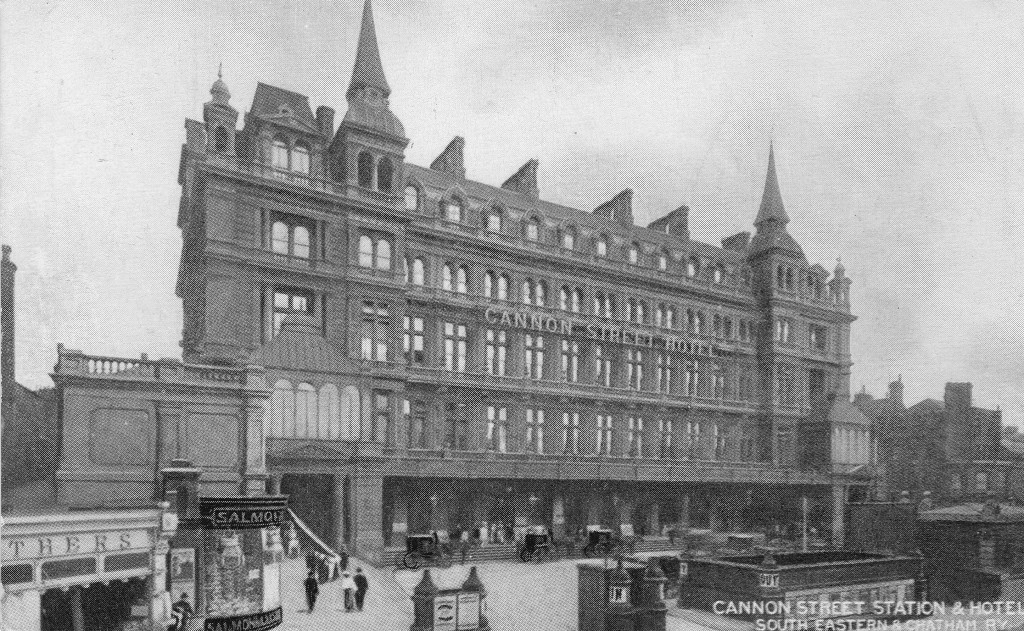 To show how similar they are, the following shows Charing Cross Station. This is no coincidence as they were both designed by Edward Middleton Barry who also designed the replica Queen Eleanor Cross which stands in the forecourt of the station. The hotel at Cannon Street has long gone, and the station entrance now looks very different. Charing Cross provides a physical reminder of what once stood in Cannon Street. 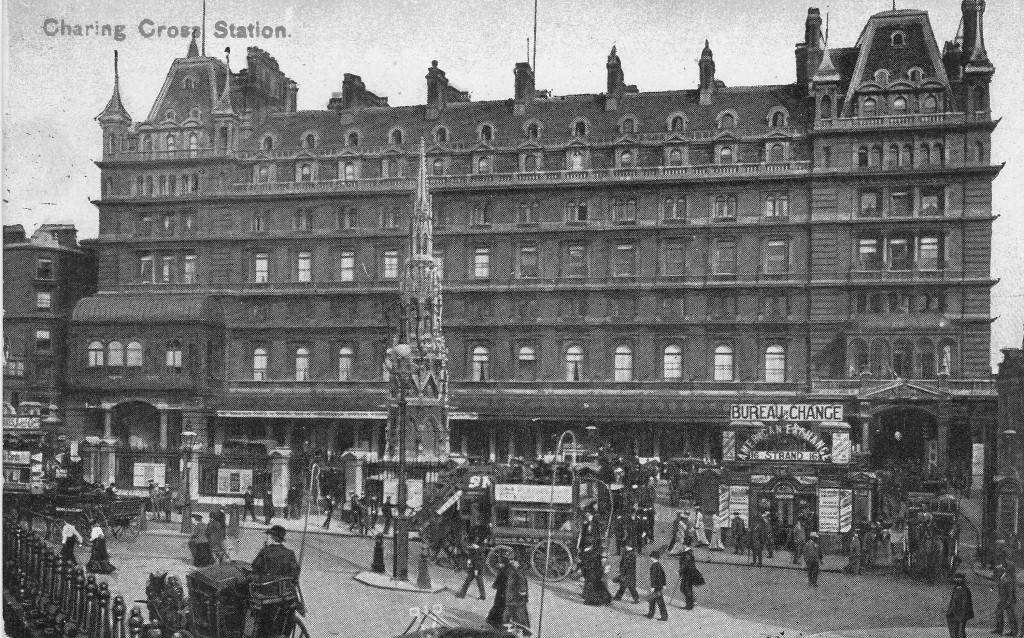 The next postcard is of the Monument, however what I find more interesting about the scene are the people, and also the large amount of advertising on the building to the left. The postcard was posted at the station at Walton on Thames by someone who had just moved into a new house in Weybridge. Perhaps a City worker who had bought the postcard in London. 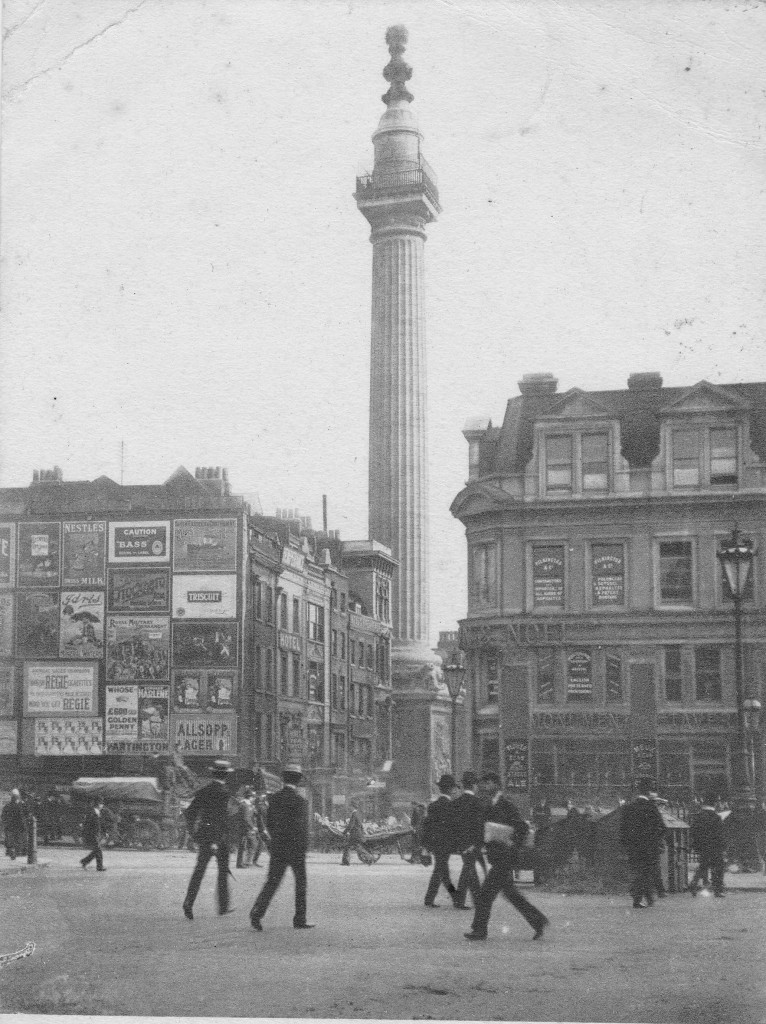 The posters include adverts for, Nestles Swiss Milk, Bass beer, the Royal Military Tournament, Regie Cigarettes, Allsopp’s Lager and Triscuit, which if it is the same thing is a cracker produced in America and is still in production today. The building on the corner on the right is the Monument Tavern.

London’s bridges have always been popular subjects for postcards, and the following view is of London Bridge. The bridge shown is that designed by John Rennie and opened in 1831. It was sold in 1968 to make way for the current London Bridge and rebuilt in Lake Havasu City, Arizona. Both the buildings on either side of the end of the bridge are still there, Adelaide House on the right and Fishmongers Hall on the left. 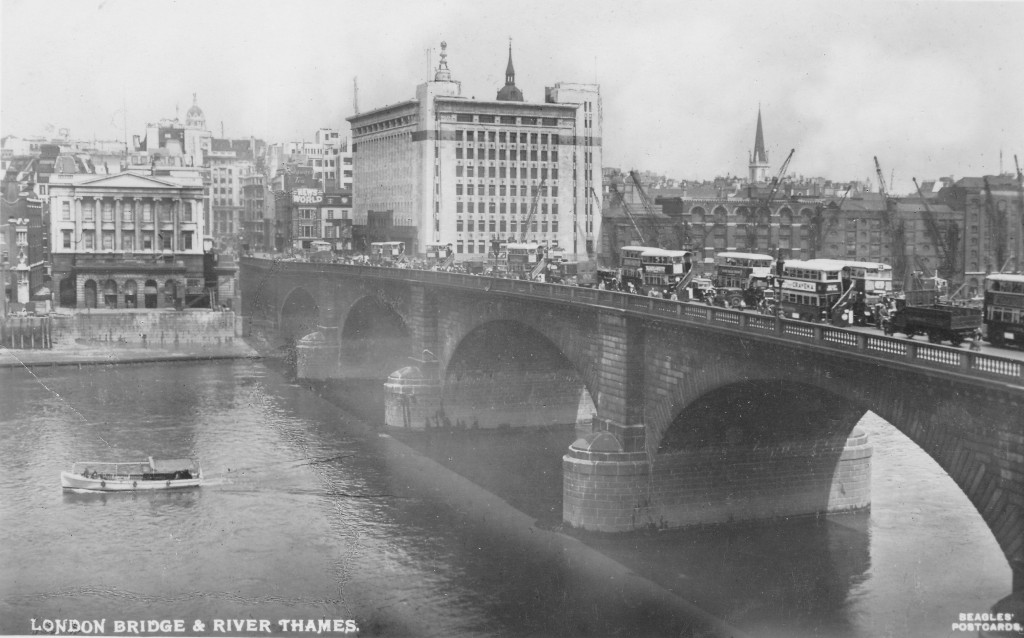 And the following postcard shows Blackfriars Bridge. The large curved building at the left of the bridge is De Keyser’s Royal Hotel which was opened on the 5th September 1874 by Sir Polydore de Keyser who came to London as a waiter from Belgium and eventually became Lord Mayor of London. The Uniliver building is now on this site. 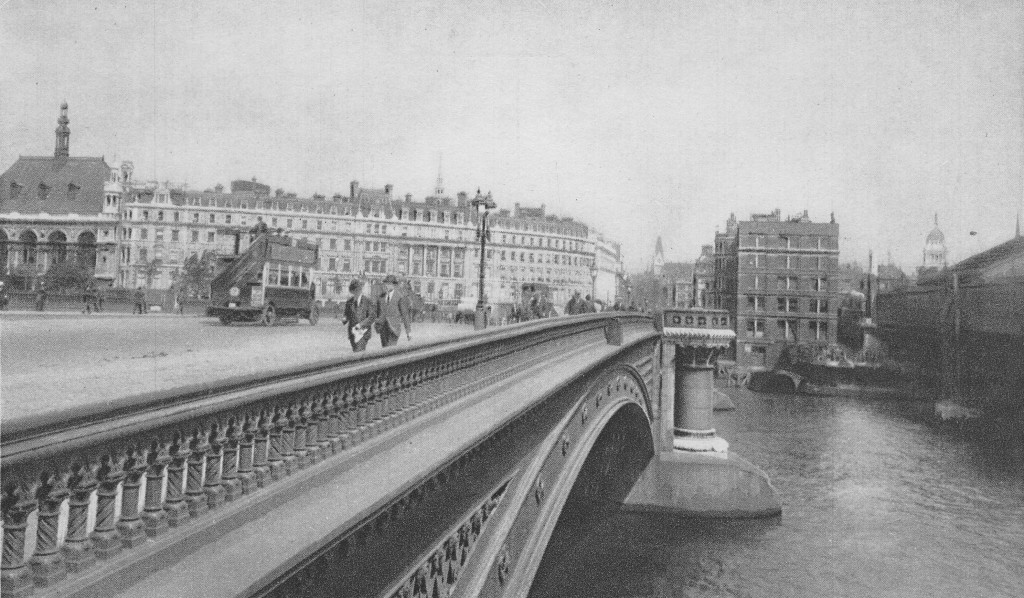 The following postcard is titled “The Hanging Gardens of London, Selfridges Water Gardens Looking West”. The roof of the Oxford Street department store, Selfridges, had gardens and cafes during the 1920s and 30s and were a popular location after shopping. The roof gardens were damaged during the last war and never reopened. 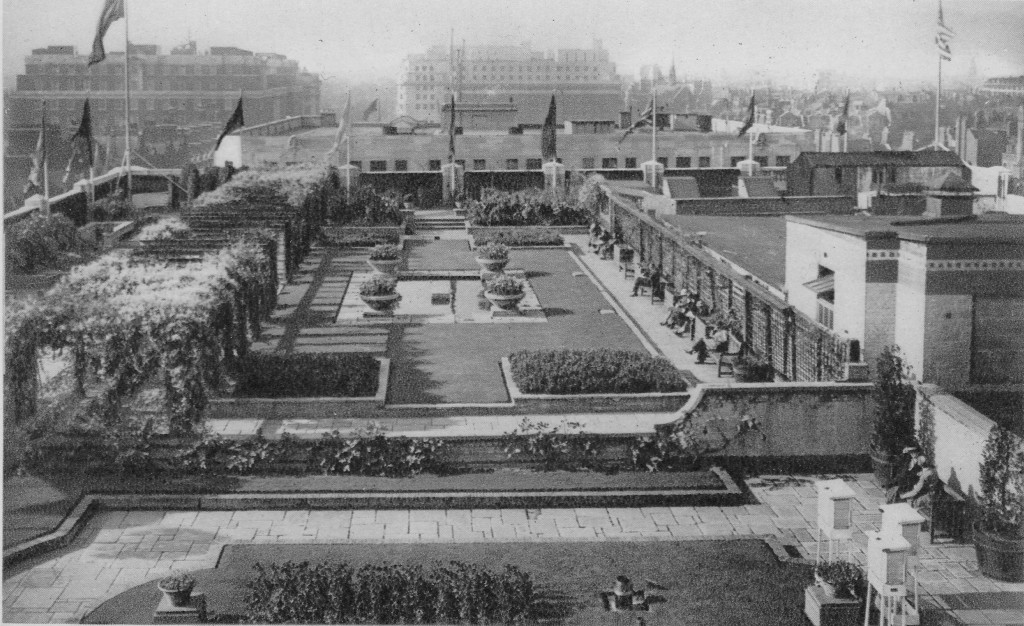 The following postcard shows the London County Council Millbank Estate, and judging by the condition of the streets, this must be soon after construction of the estate finished in 1902. The building halfway down the road on the left is a school. The estate and the school are still in existence and the buildings today look much the same although there is now parking lining most of these streets. The Milbank Estate is Grade II listed. The people in the photo are probably some of the first occupants of the estate. 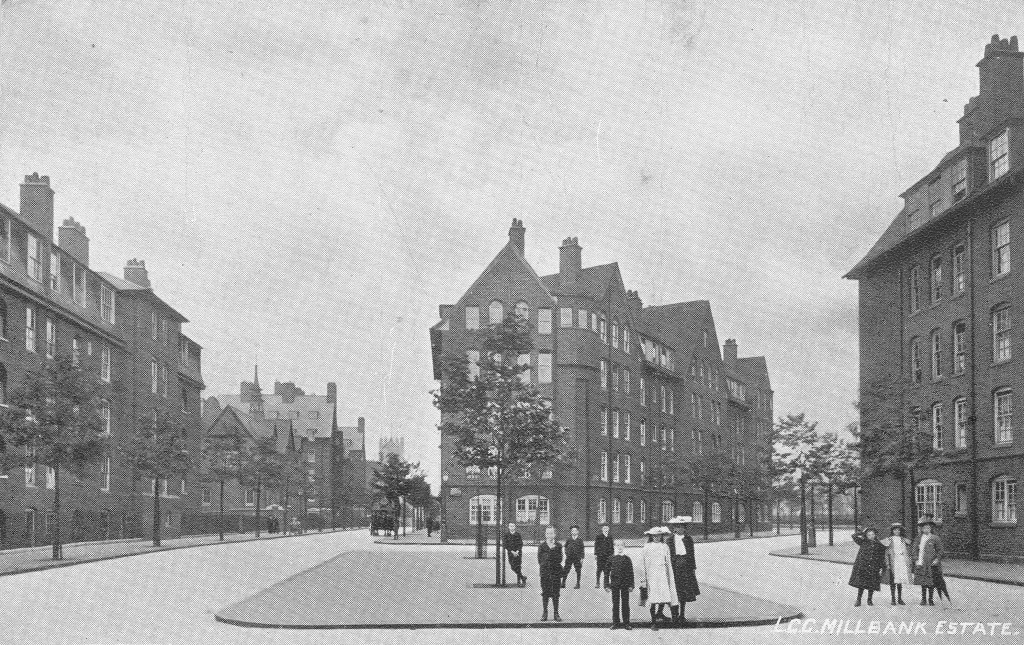 Although the Tower of London is the subject of the following postcard, I find the background of more interest as it shows London when the height of buildings was relatively low compared to the City we see today. This postcard has a 1931 postmark and was sent to Belgium by a visitor to London. 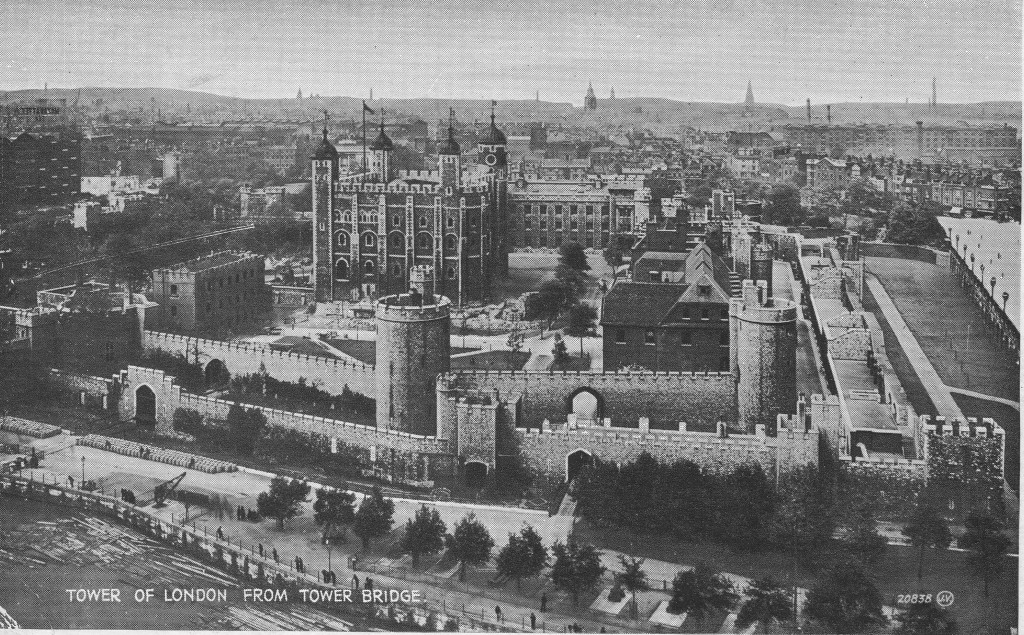 The following photo taken from Bankside shows the north bank of the river with the original wharfs.

Paul’s Wharf in the centre with St. Paul’s Pier in front, the London & Lisbon Cork Wood Company (the smaller building towards the right with the white upper part), and Trig Wharf to the right. The Millennium Bridge now crosses the river here, roughly at the site of the London & Lisbon Cork Wood Company.  The Bankside location has always provided a superb view across the river and has a fascinating history which I wrote about here, mainly involving the transport of coal and other goods on the river hence the lighters on the river in the foreground. 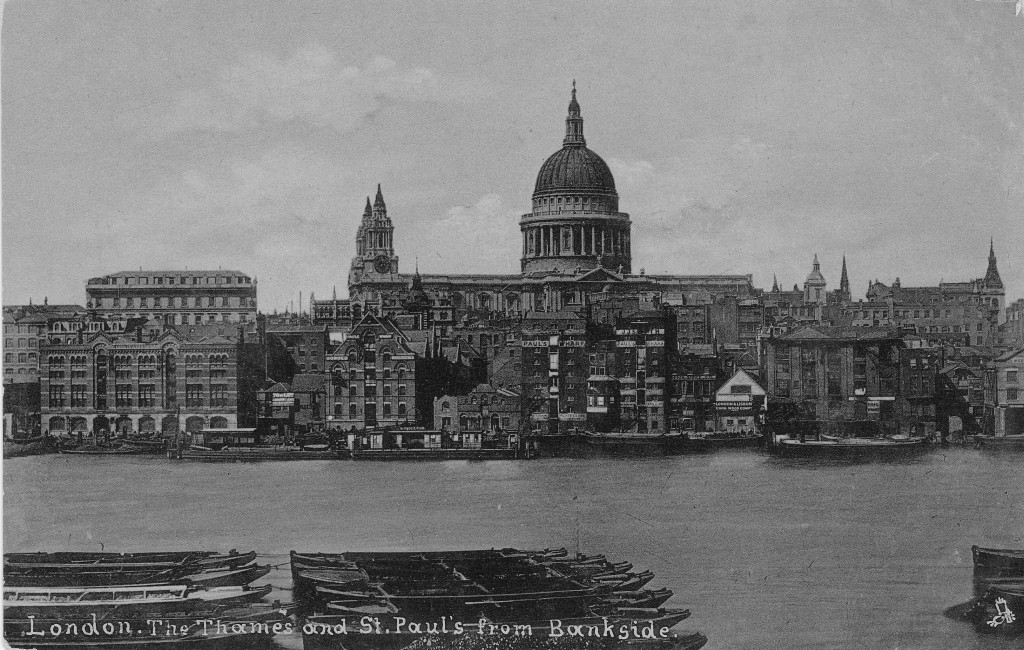 In the days before the personal ownership of portable cameras, postcards were about the only means of sending a message showing where the author lived or was visiting and as such they provide a fascinating insight into early 20th century London.